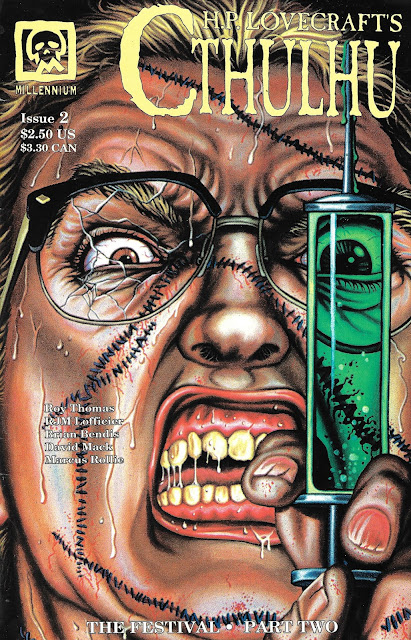 When it comes to the Cthulhu mythos in comic book form, I find that there exists three broad categories. One type are direct adaptations of Lovecraft stories, such as the Corbin Haunt of Horror books or Adventure’s H.P. Lovecraft.

The second are new stories that share with the mythos a backdrop, theme, and tone. Good examples of this type would be Alan Moore’s The Courtyard or The Fall ofCthulhu series.

The third are like our story for today, the second book in the second three-part series called H.P. Lovecraft’s Cthulhu. These types of books contain mythos characters, places, objects, and monsters, but are so far removed tonally that they can’t be grouped with type two. That Howard Lovecraft and the Frozen Kingdom abomination would be another.

Now I reviewed one of the books in the first series of H.P. Lovecraft’s Cthulhu (The Whisperer in Darkness trilogy) and found myself hating its “Call of Cthulhu” game-session style storyline. That Frozen Kingdom thing must have been really horrid, because I find myself happily skipping through this book, regardless of how many liberties it took with the source material.

I mean, I still don’t like it. But I find myself too tired to muster enough emotion to actively hate it. It’s blah. I am a fan of Roy Thomas and RJM Lofficier…I can stand Brian Bendis’ pencils a bunch more than I can his writing…but they still take poor HPL’s great universe out for a spin and bring her back all covered in road grime and bugs.

This isn’t a recommended series.

But I would rather review 100 pages of this than another 10 pages of Howard Lovecraft and the Cold-Hard Cashgrab or whatever that last mess was.

As we jump into page one of this one, I’d already forgotten the way that last arc wrapped up and what all was involved. So, if my head spun around three times at seeing Randolph Carter sitting front and center of the annual Kingsport weird cult pot-luck known to HPL fans as the titular “The Festival,” you’ll be understanding. Carter is HPL’s famous good-guy sorcerer who generally inhabits his dreamlands tales. And I haven’t read The Festival in years, but I never remembered Carter being a part of that story. 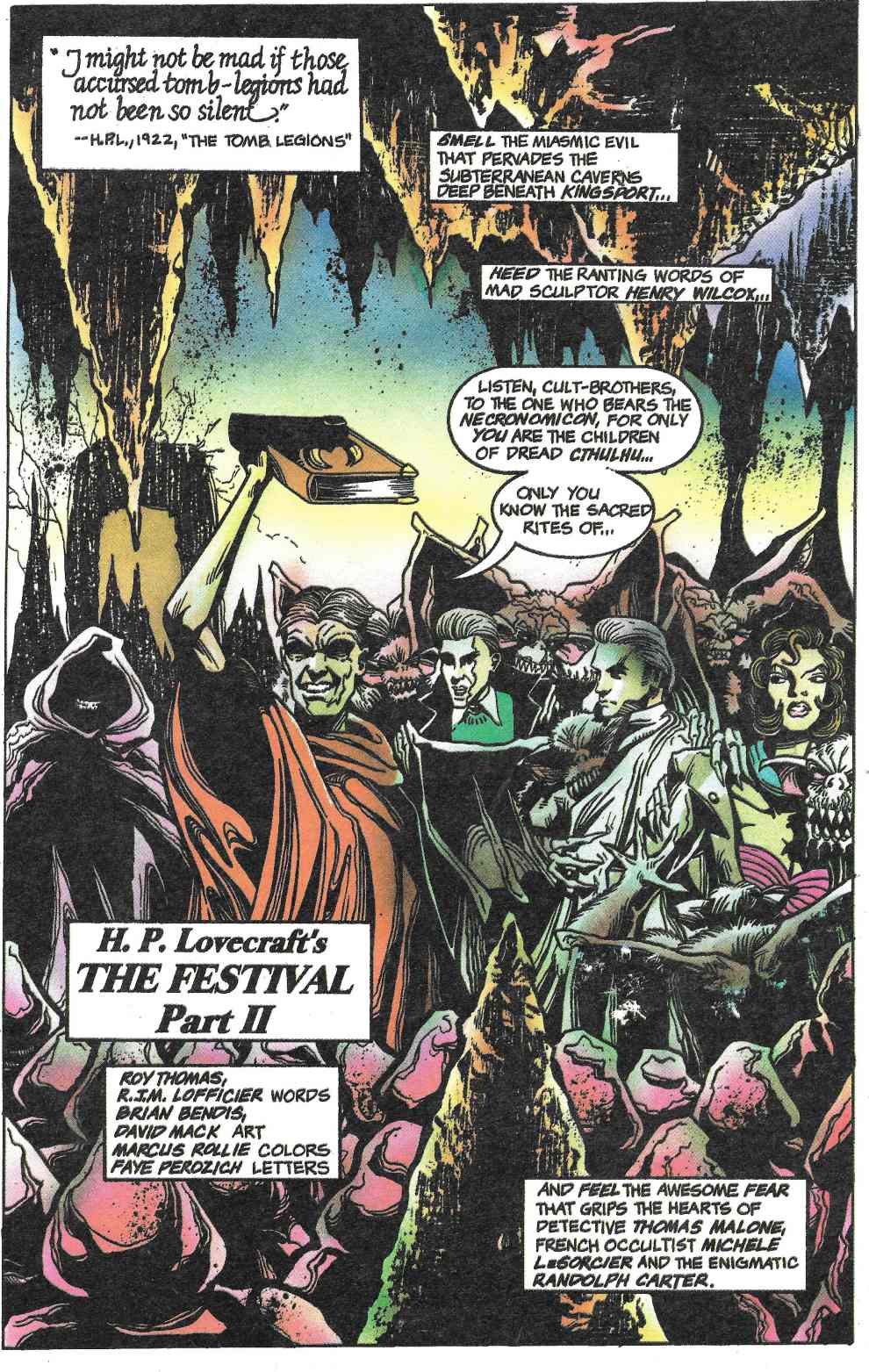 Don’t know the two people captured with him. They don’t appear to be Lovecraft mainstays.

The other thing causing me a bit of confusion is that the art in this is done by none other than Brian Michael Bendis, the chief architect of the Marvel Ultimate universe and current Superman scribe. The guy has more credits on more books than you can shake a 10 foot pole at, but always, to my knowledge, as a writer.

I didn’t know he could draw, too.

I’m off-balanced by all this and drop any pretense I have to being above the silly storyline and the “pour all the Lovecraft words into a blender on high and see what comes out” mindset. We have The Festival cultists having captured Randolph Carter. Fine. Okay, take it away book… 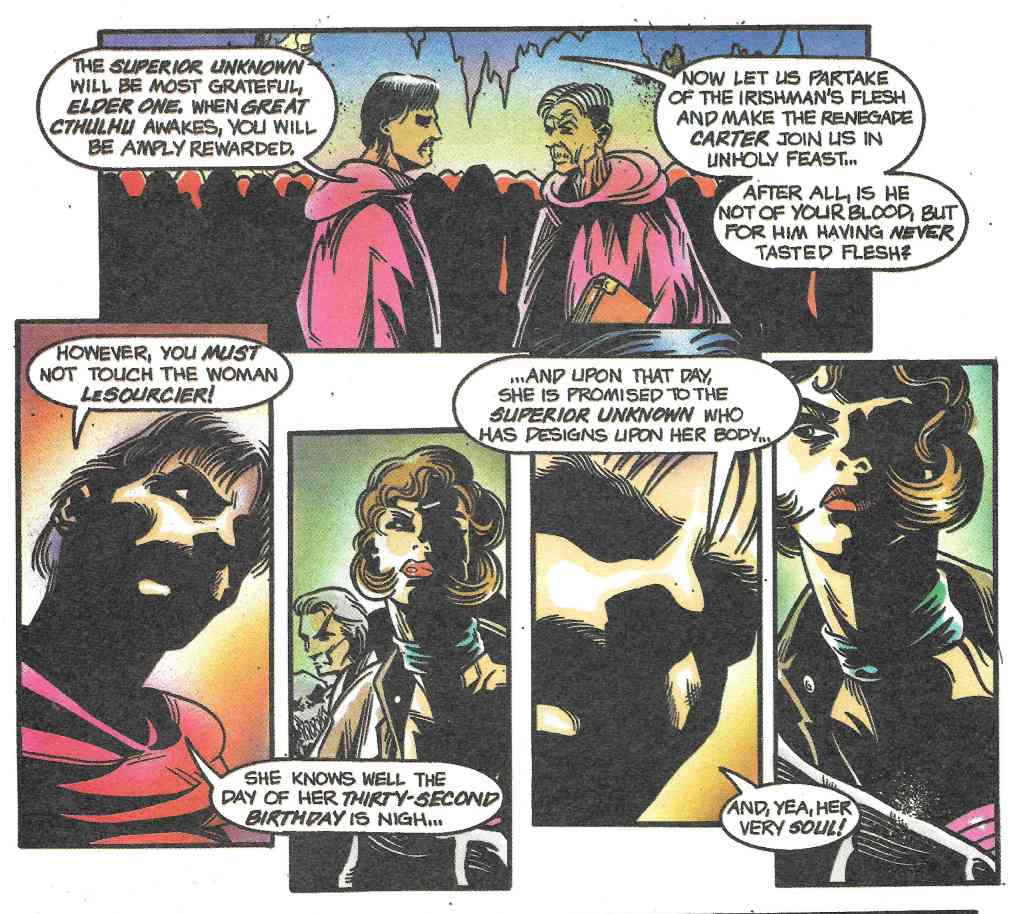 The tone of this series, like its predecessor, is that of a pulp adventure story with fantasy-horror elements…and if you are looking for that, the book succeeds, I suppose. It isn’t really my bag when it comes to HPL stuff, I want a more horror-centric tale. This feels like the center of Shadow Over Innsmouth, the one tale where Lovecraft went with a bit of fast-paced action. Arguably, that is one of his most successful too, but it is moreso for the blending of the elements than for the fact that it has a chase scene in the middle.

But to the story at hand: Stop me if you’ve heard this one before -Carter, a Detective Malone and an occultist named Michele LeSorcier walk into a crazy cult gathering in a cavern under Kingsport featuring otherworldly creatures and are captured.

The trio are following a mad sculptor’s ramblings seeking “Cthulhu” and “The Superior Unknown,” which sounds a bit like a metal band. The cult leader seems to know something about them though. However, before they can ask him what they are, the three of them will have to avoid fates he and cultists have planned for them.

Which wouldn’t be easy, except that last issue they planted some timed charges in the cathedral that led into these caves…which, I assure you, means that blowing up churches of religions you didn’t like must have been commonplace in the 1920’s. Just go with me here. 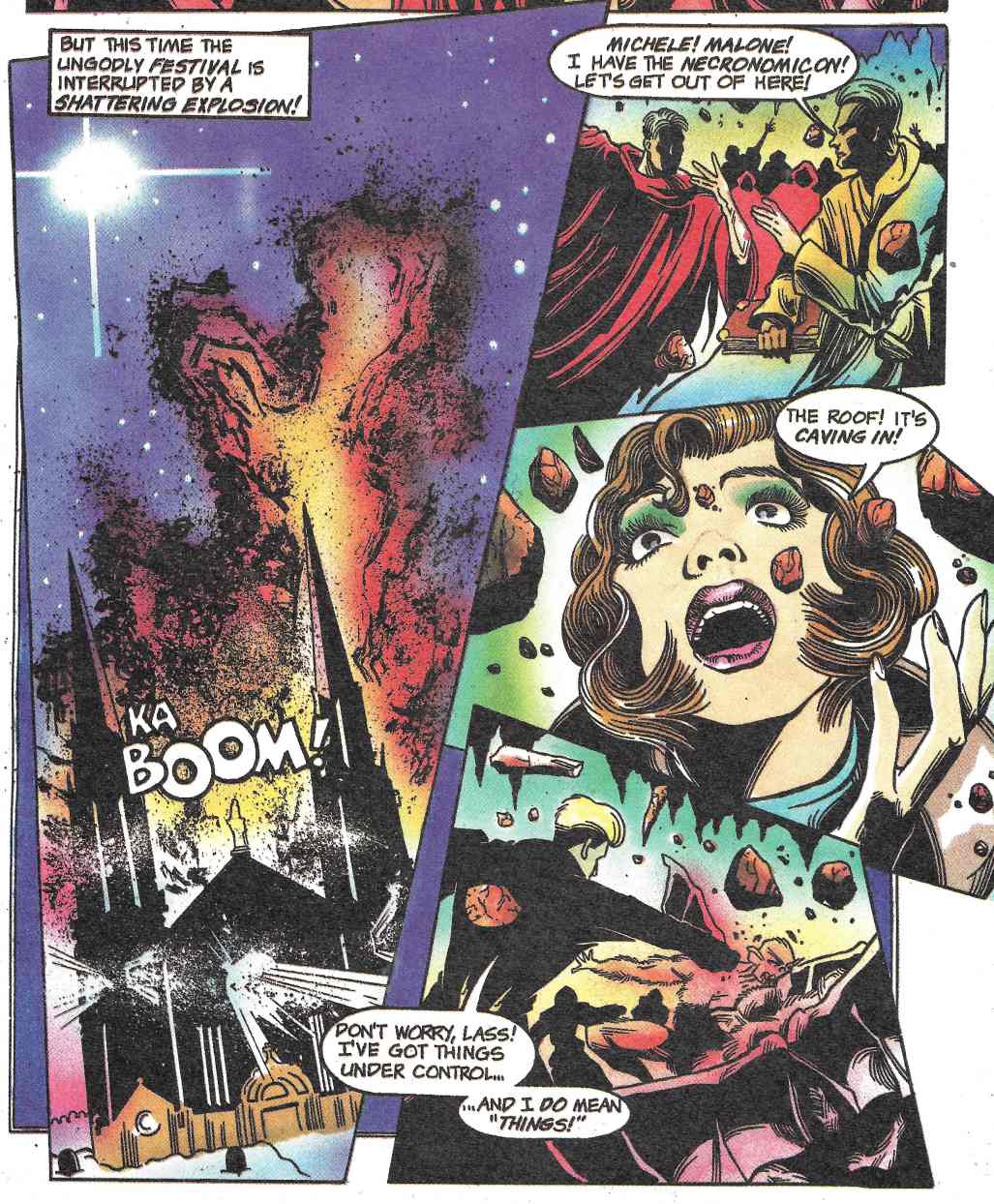 There’s a bunch of crazy scramblings as the roof comes apart. Carter and friends beat a hasty retreat…until Carter gets nabbed by the cult leader… 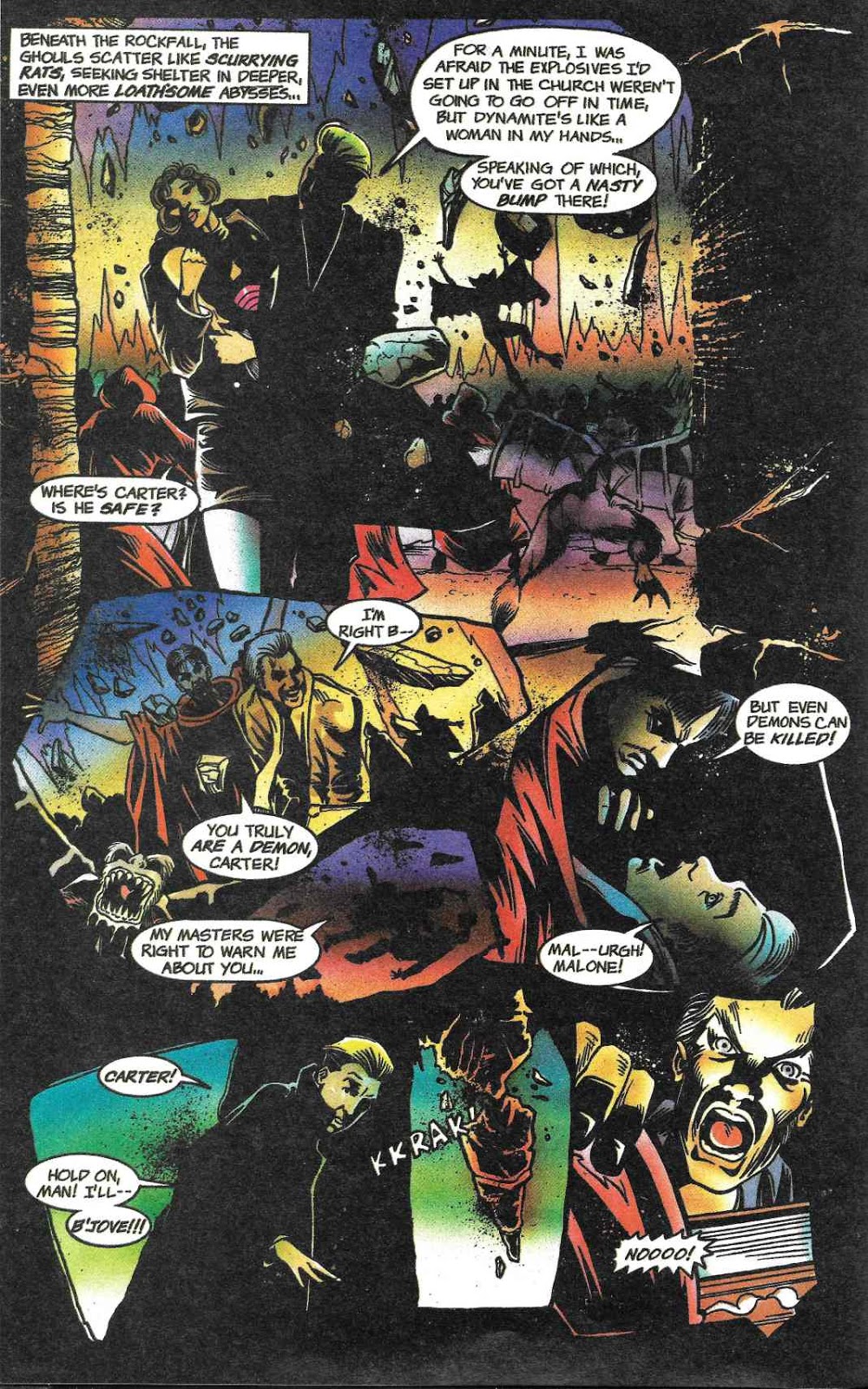 …but he rolls free as the man gets impaled by a falling stalactite. 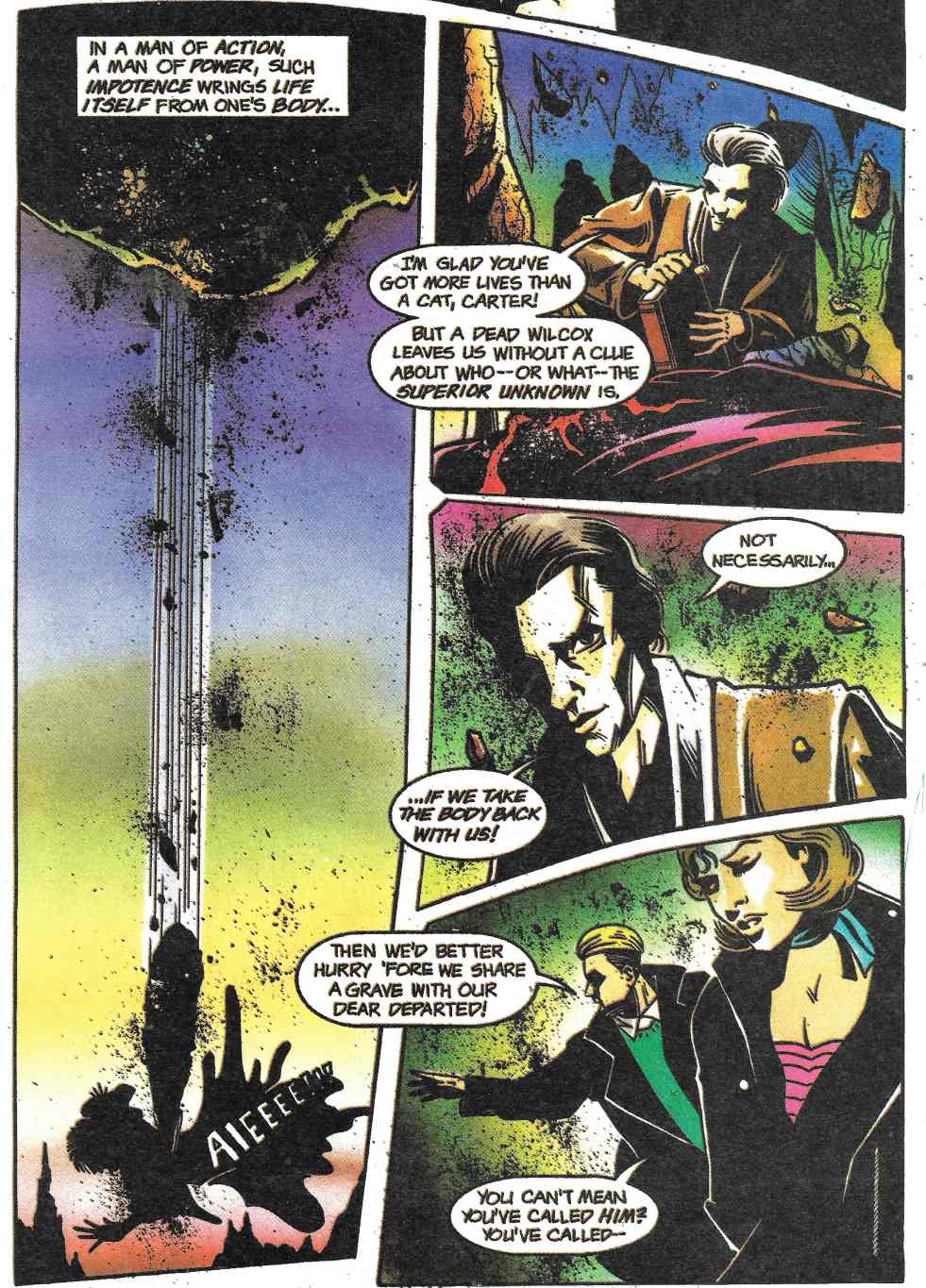 You’d think the cult leader being dead would prevent our heroes from gathering any further information from him…and there you’d be wrong. Because this is the hook that brings in… 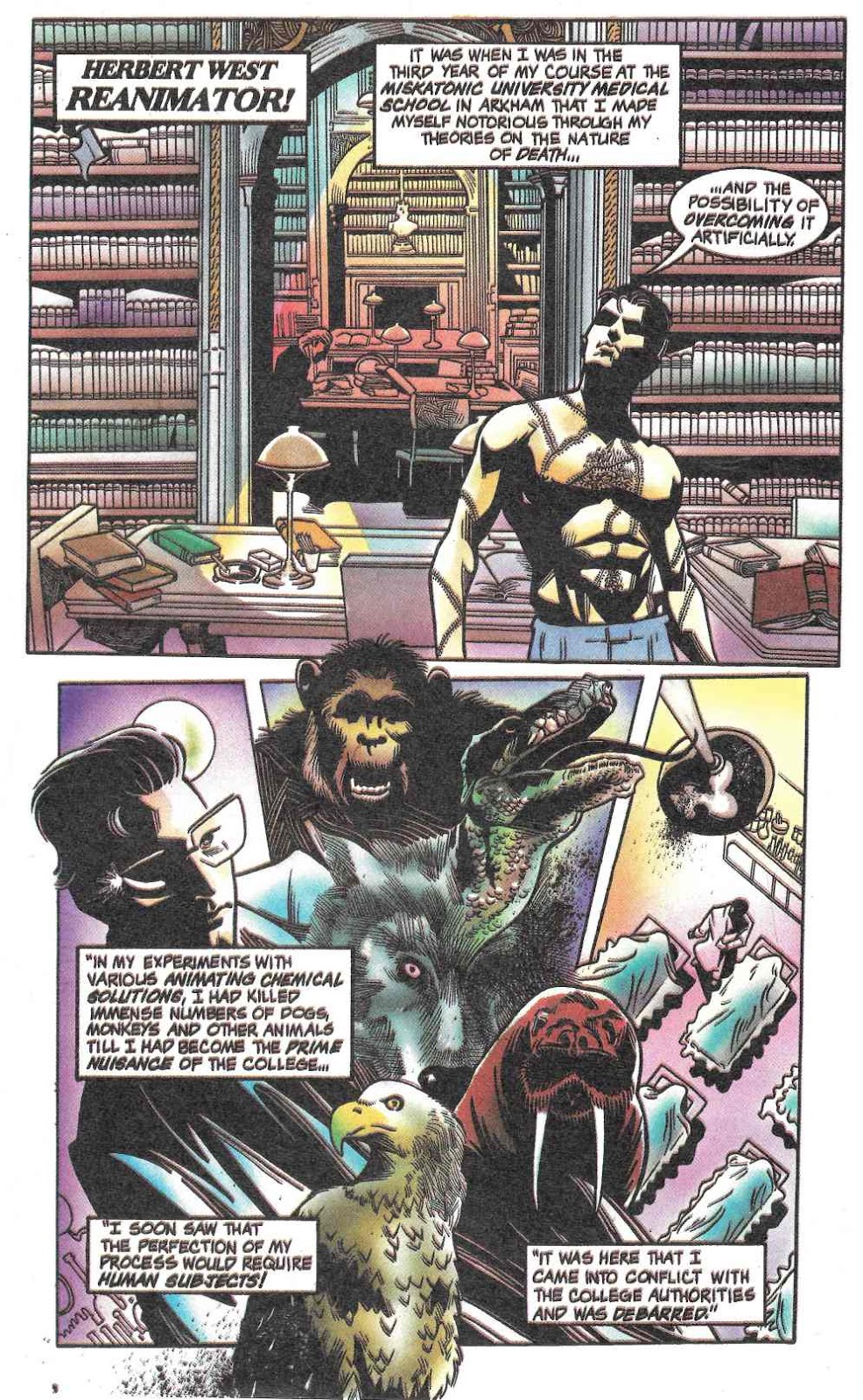 …yeah, by the WILDEST of coincidences, Randolph Carter knows Dr. Herbert West. Sure. Sure, he does.

What follows is a brief two page summation of the six-part Herbert West storyline from HPL, minus the narrator. 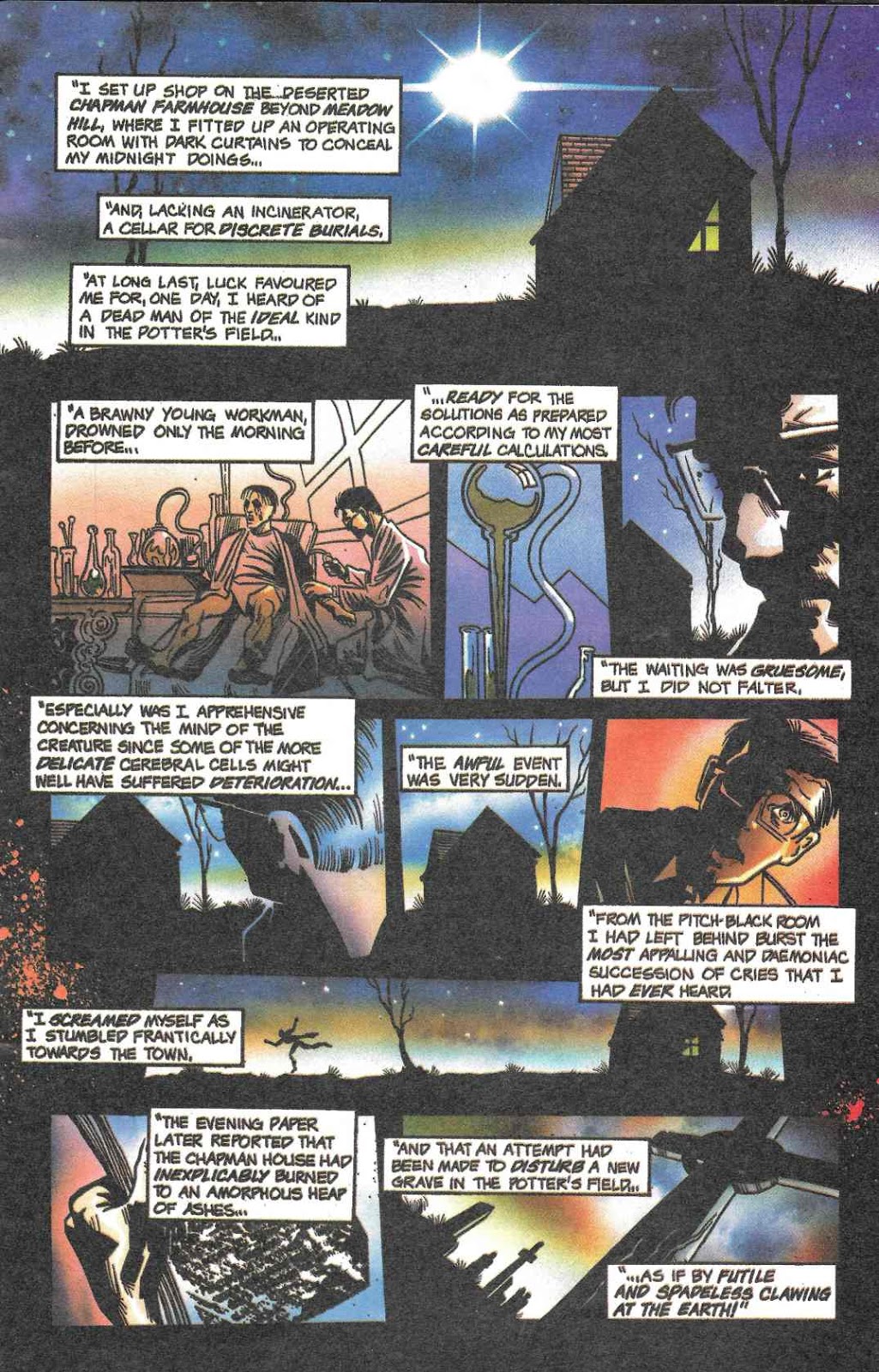 Also added is a part where West was injected with his own revitalizing serum by the creatures who tore him apart. Thus, he survived until one of the monstrous ghouls tracked down all his various body parts and put his body back together. Uh….sure. 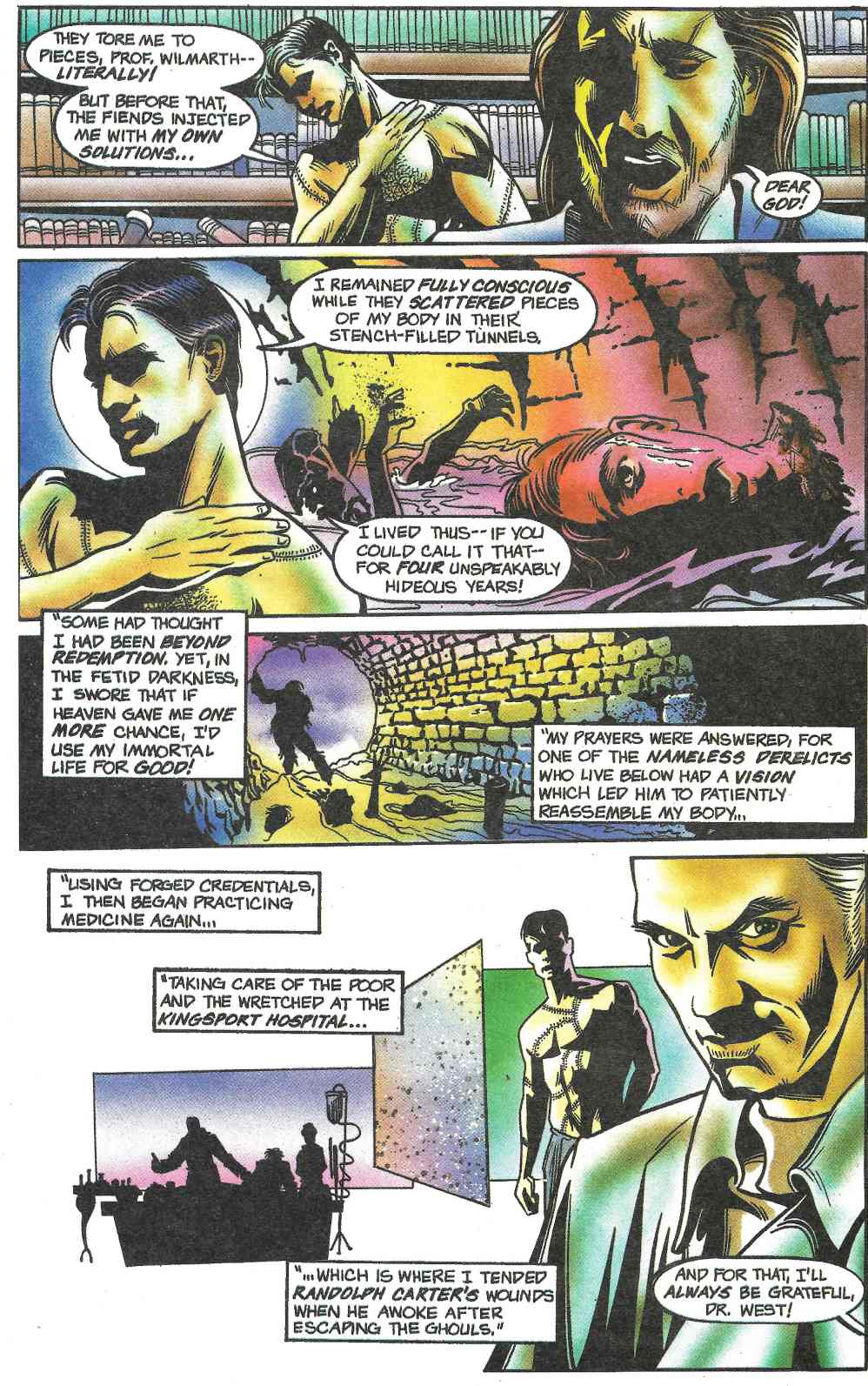 It’s not like the book is just throwing in every well-known Lovecraft mythos reference it can find at this point. 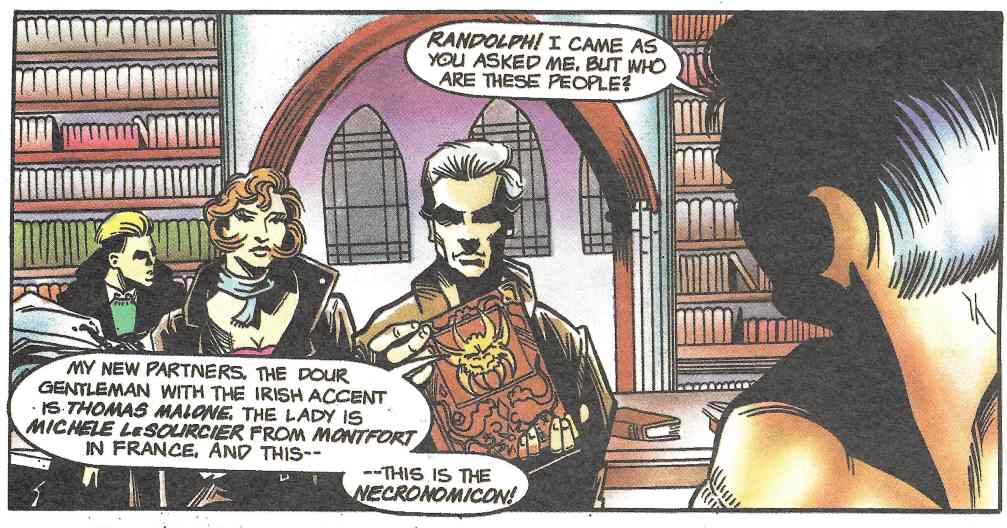 And for some weird reason the guy that loves reanimating corpses, suddenly has a bout of conscience and has to be coerced to do so. What is that all about? West barely needs a stiff breeze to get him to reanimate things. That’s one point the movie got right. 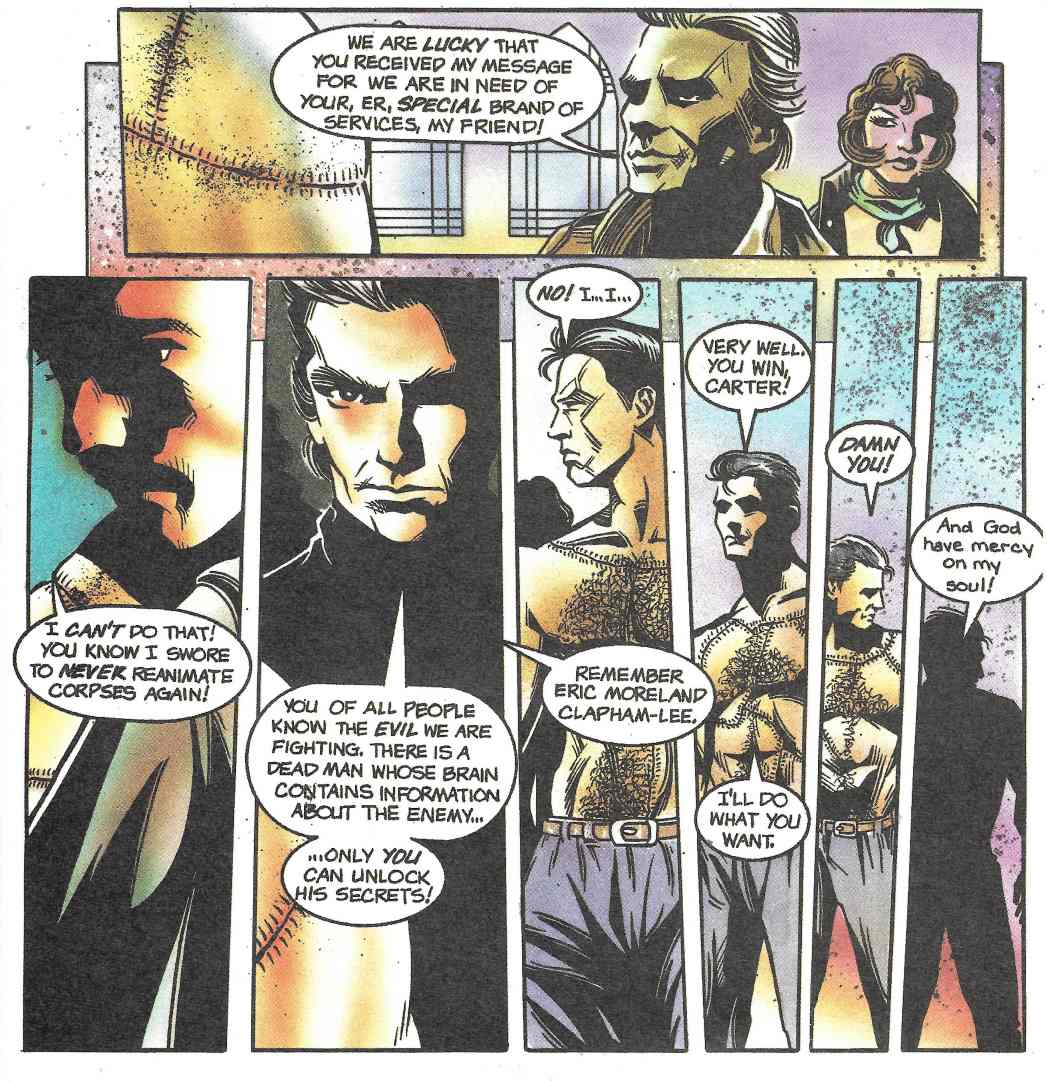 Although, weirdly enough West has to do something to the body alone to get it to come back to life. Not sure what that’s all about. 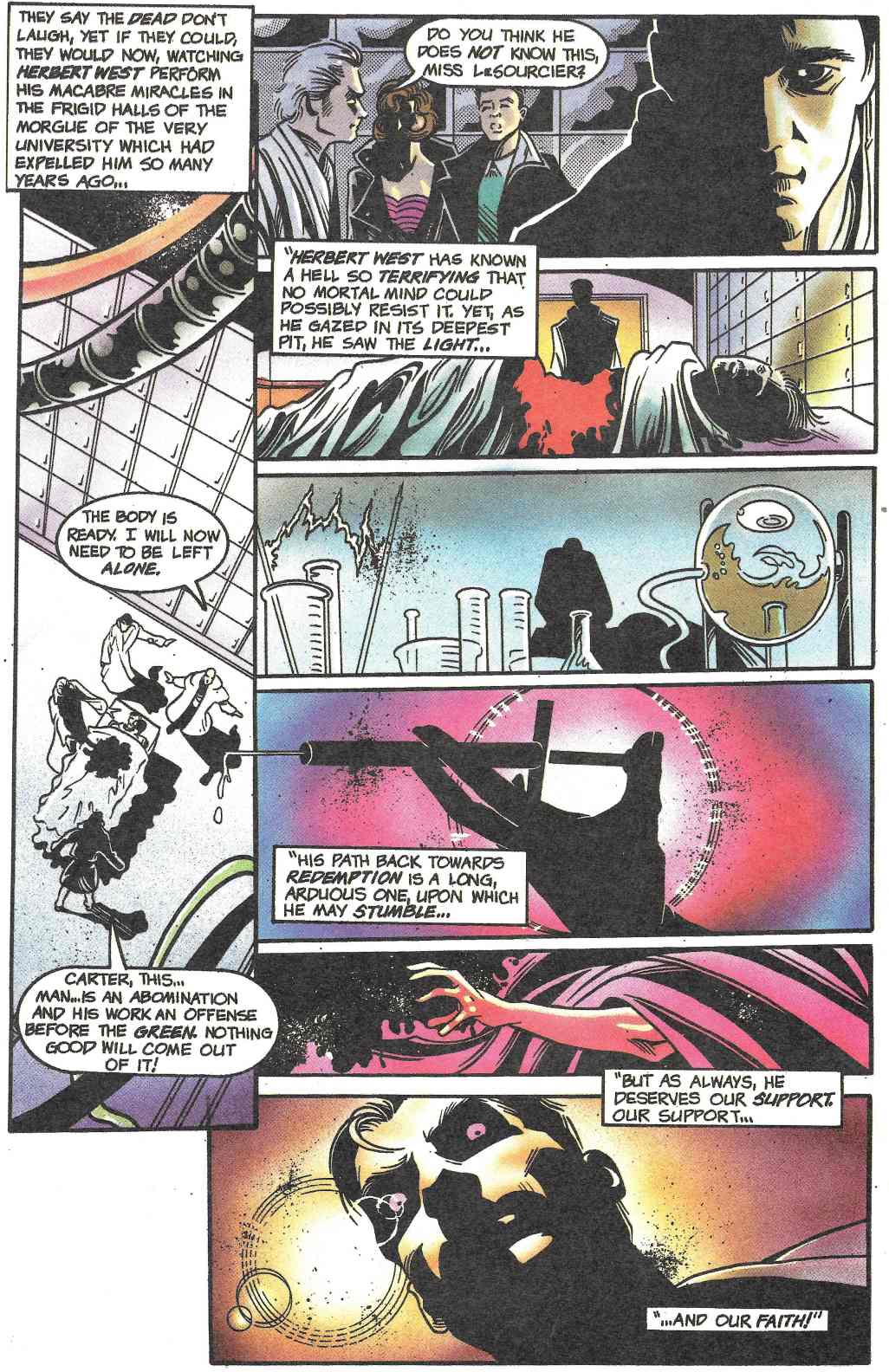 Stupidly, the three heroes allow this. The cult leader does indeed come back to life, full of fresh vim and vigor. Unfortunately, that doesn’t work out well for West who takes it on the chin. And while West “goes to pieces” quite literally, the cult leader uses the rest of the serum on the bodies in the morgue. 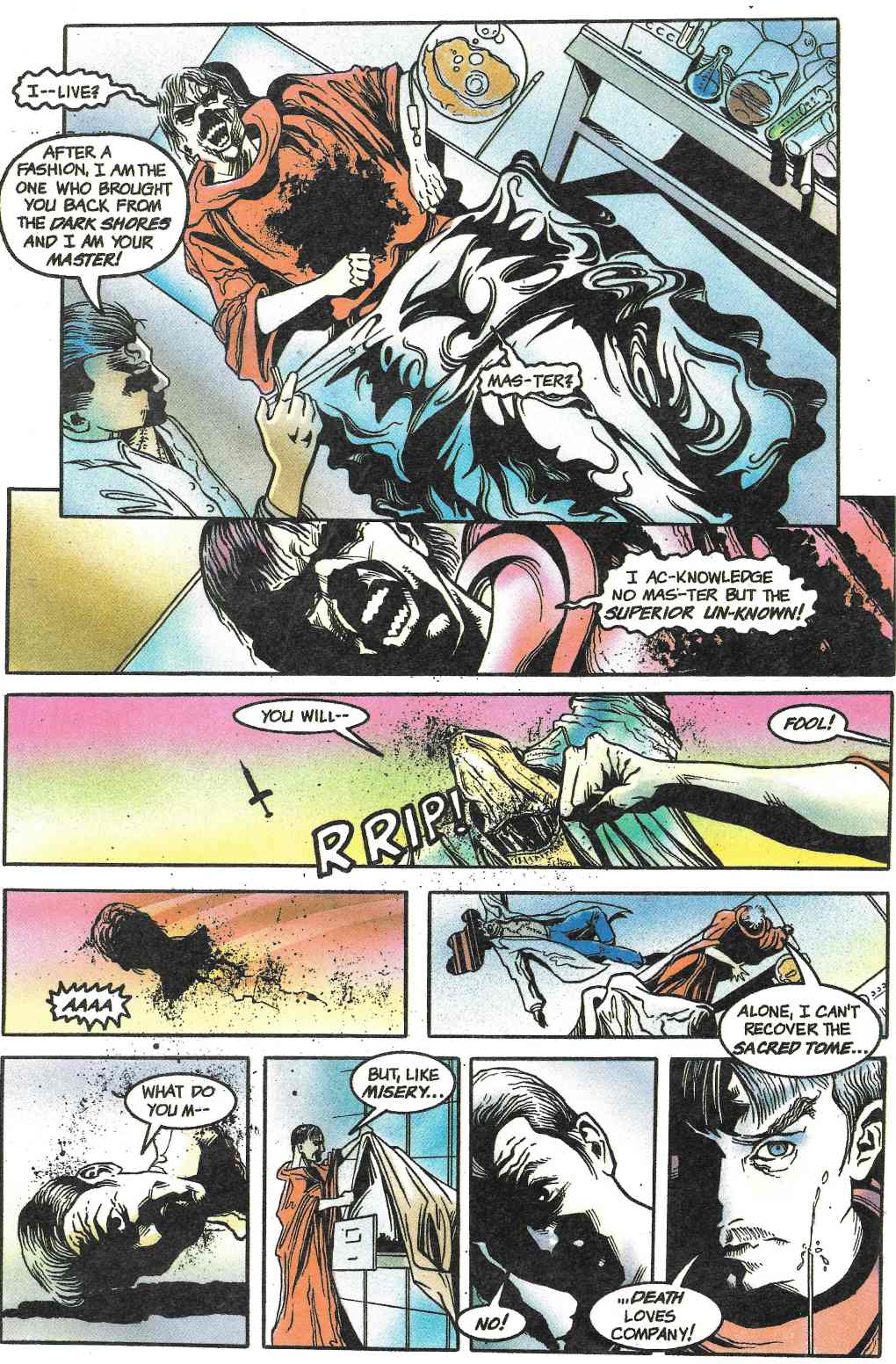 Which is why you NEVER split the party. I mean this is a Call of Cthulhu RPG adventure. And now we have a mess of ugly, half-decomposed fiends raring to go at our principals. 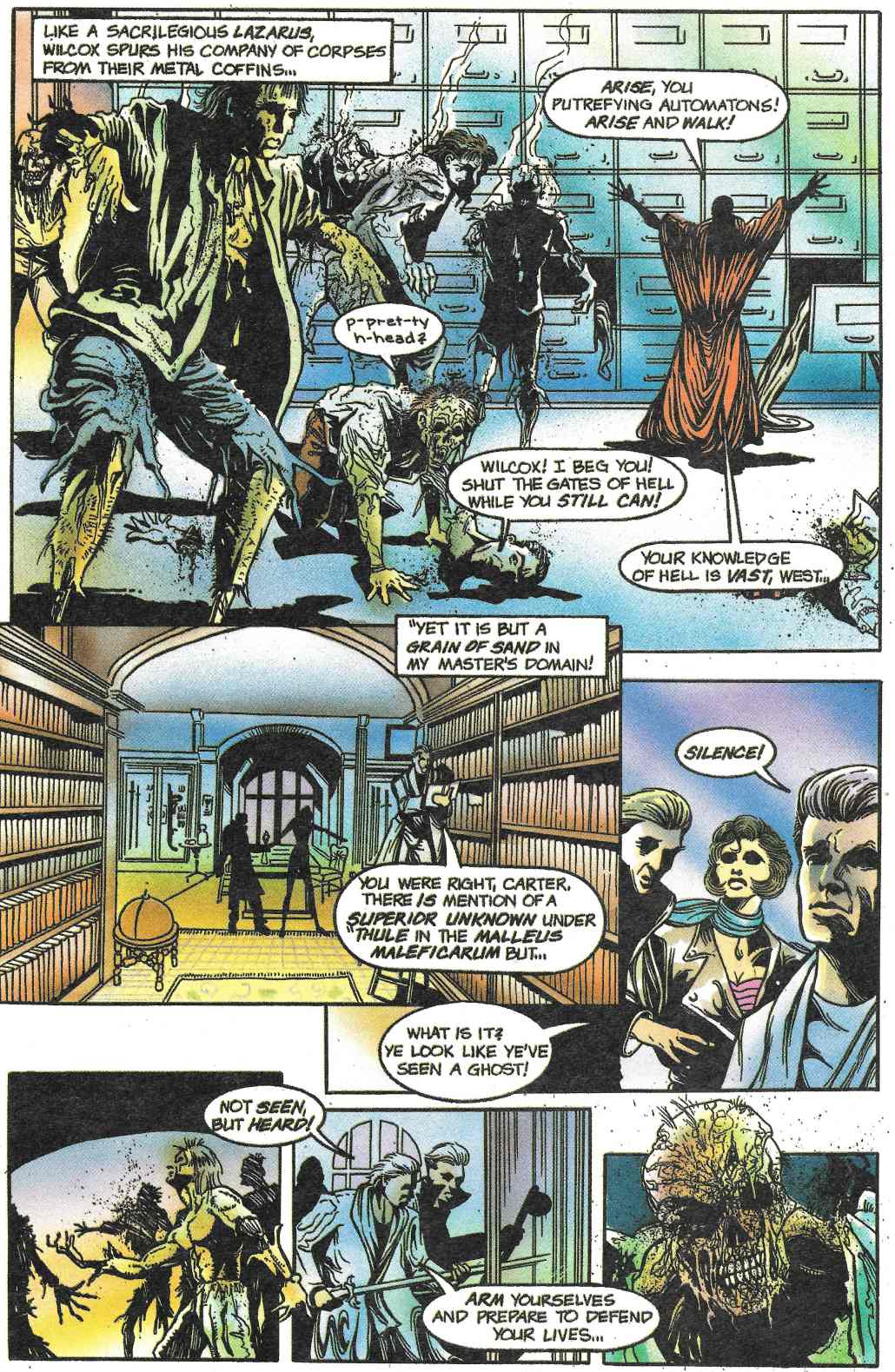 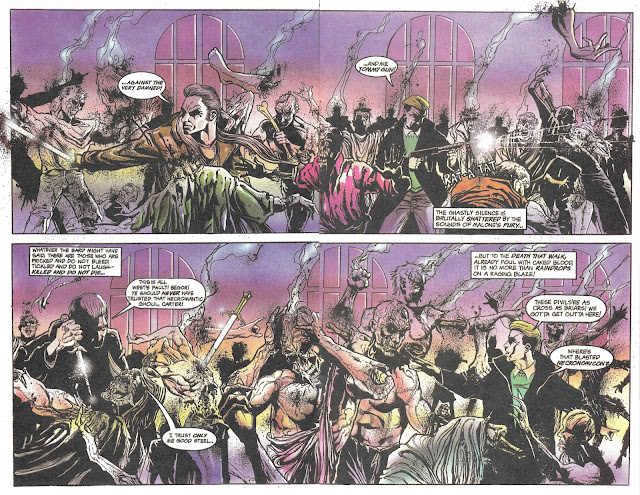 ...our female protagonist nabbing the ole Necronomicon and boot-scootin’ out the side door while using mind-powers to melt zombies. Okay…whatever you say, comic book. 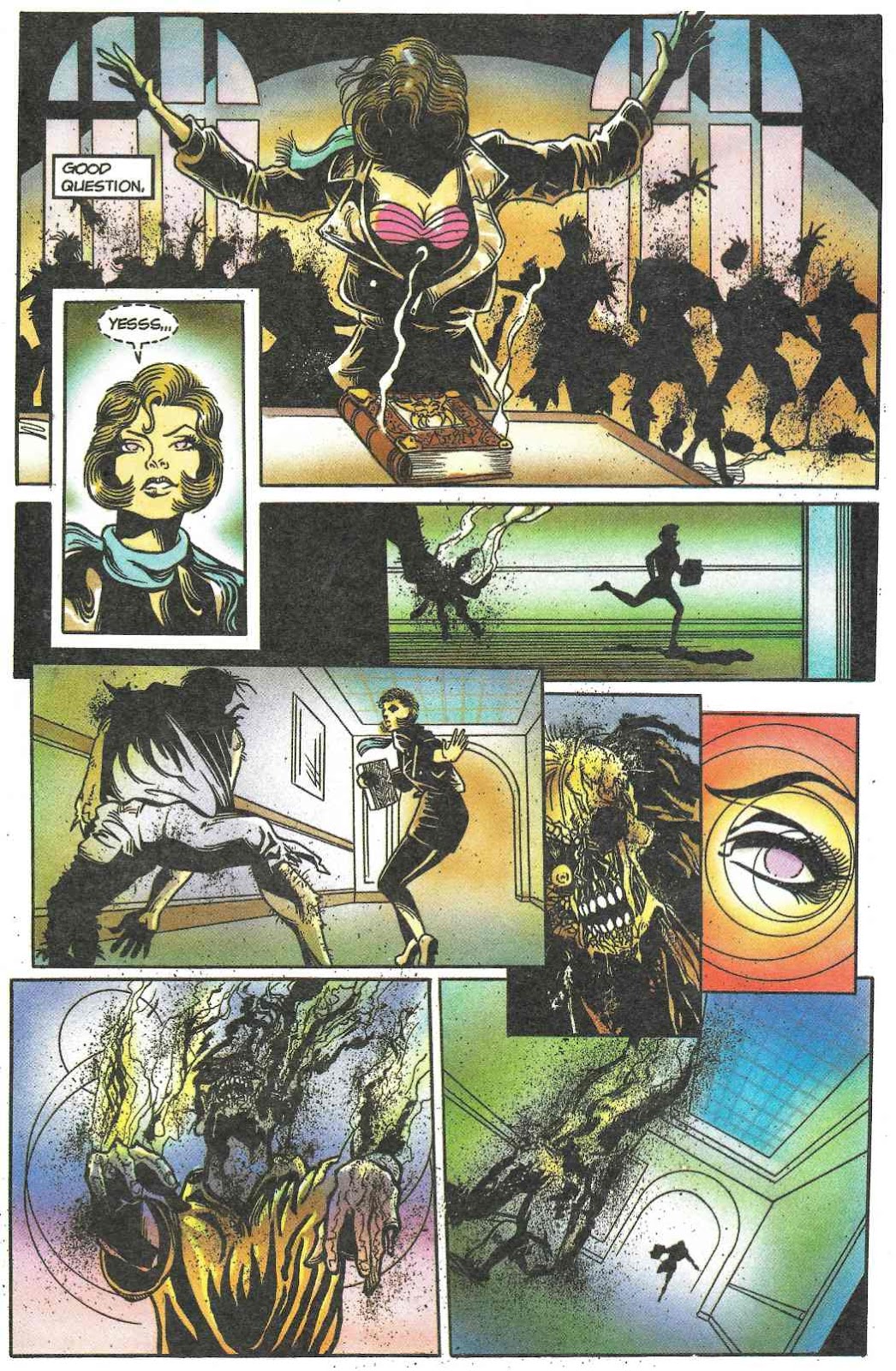 Carter and the detective get away by rushing upstairs, however they guy they meet on the landing isn’t quite so lucky… 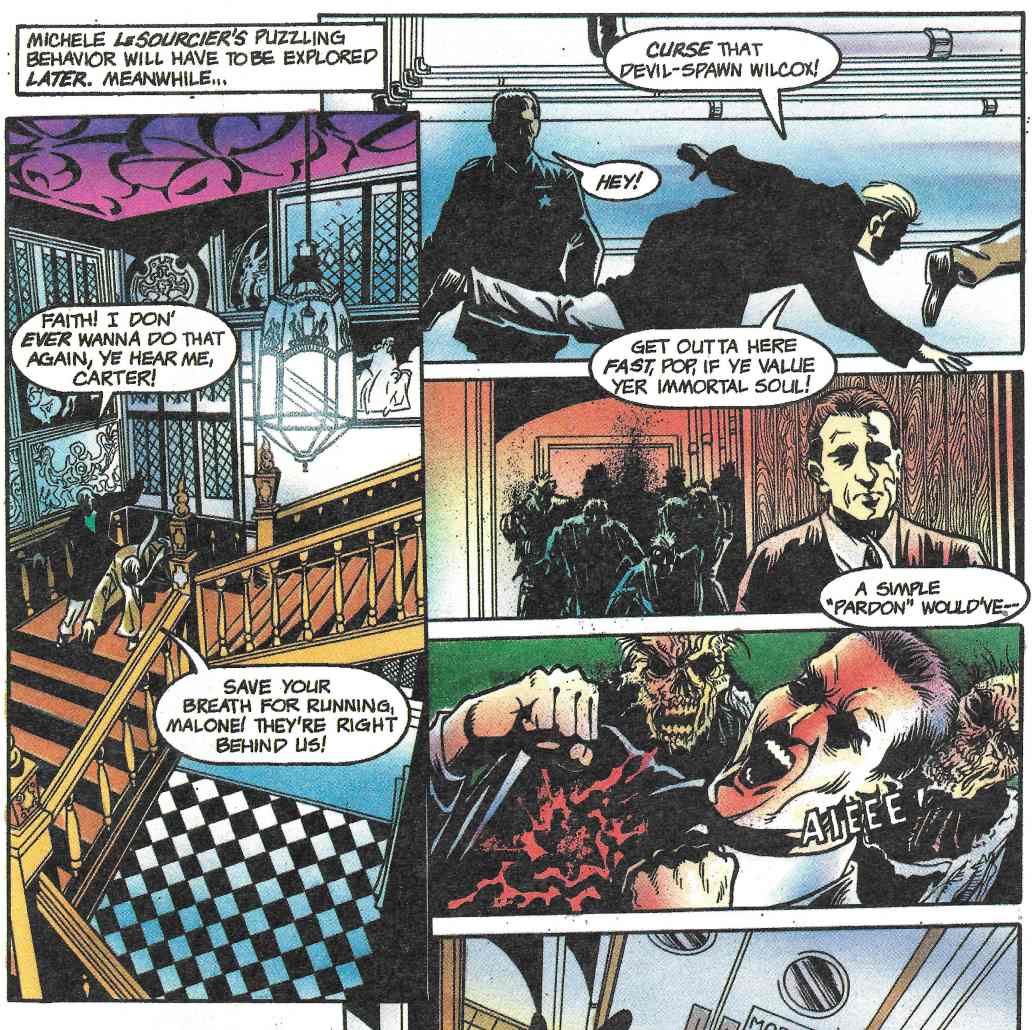 And while Carter blocks the doors, the Irishman puts West back together again in what has to be the grossest game of Humpty Dumpty ever. 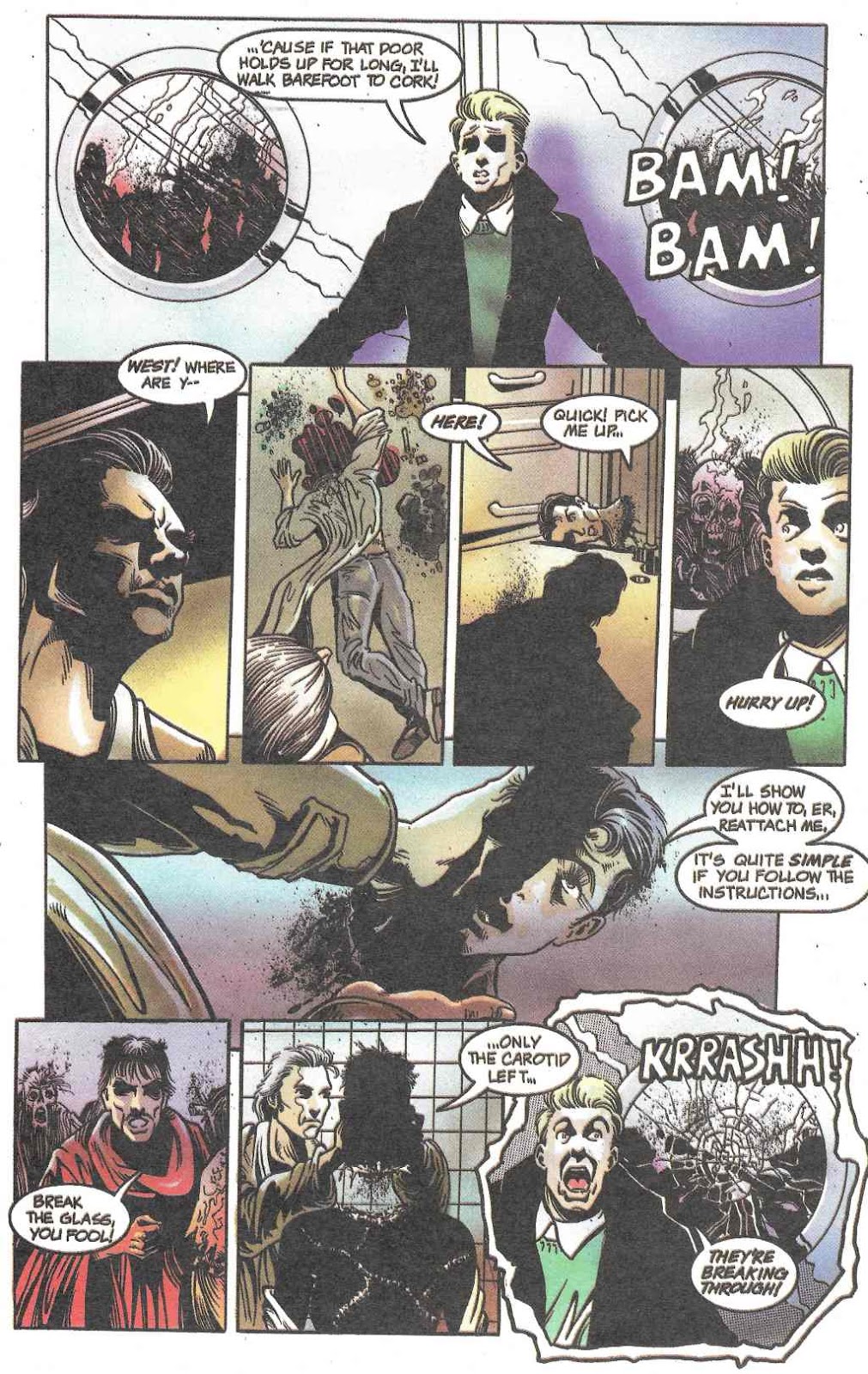 Which allows West to pull out his secret formula: a vial that instantly dissolves any reanimated flesh it comes in contact with. 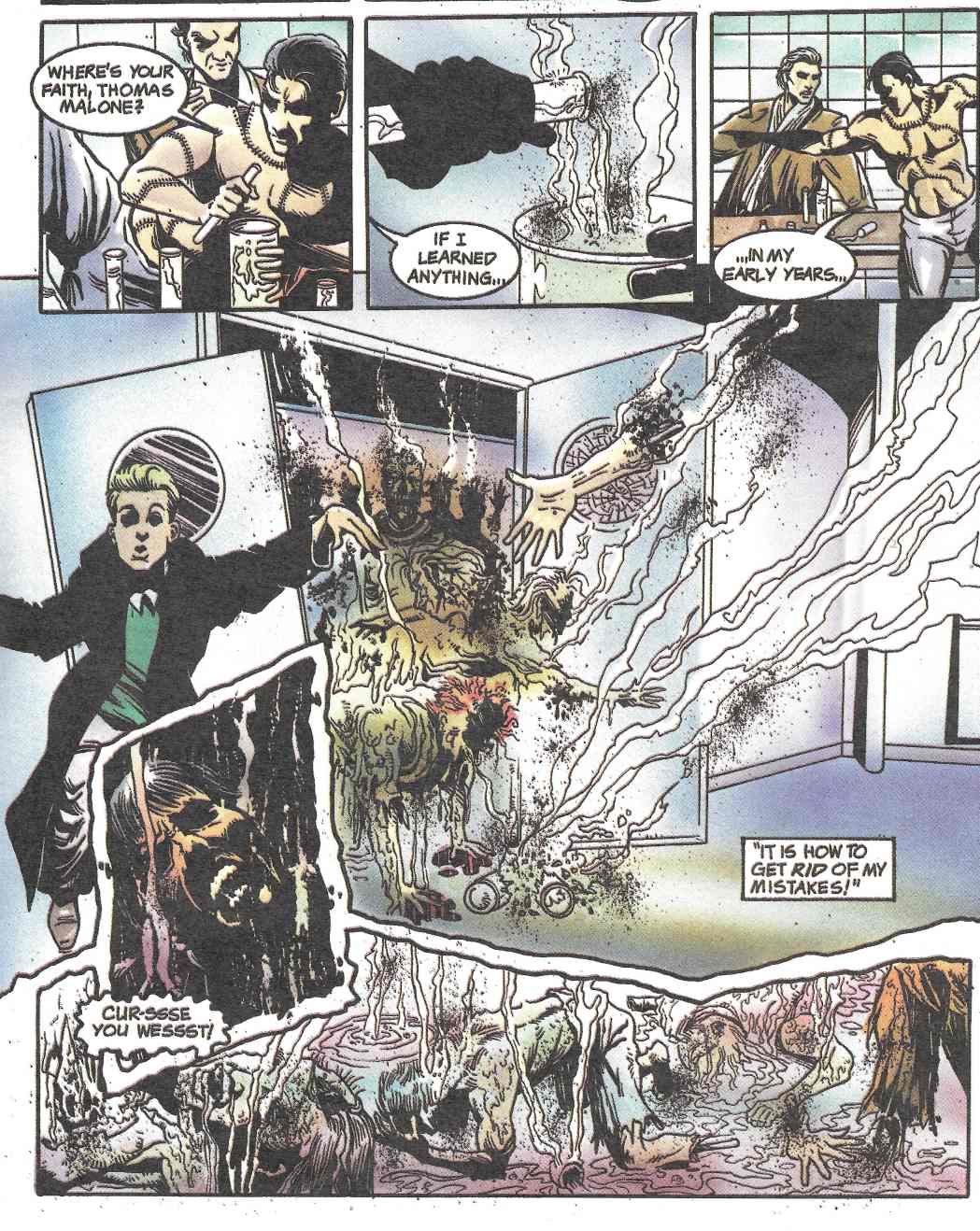 Except West’s, of course. He is immune. As is the head of the cult leader. 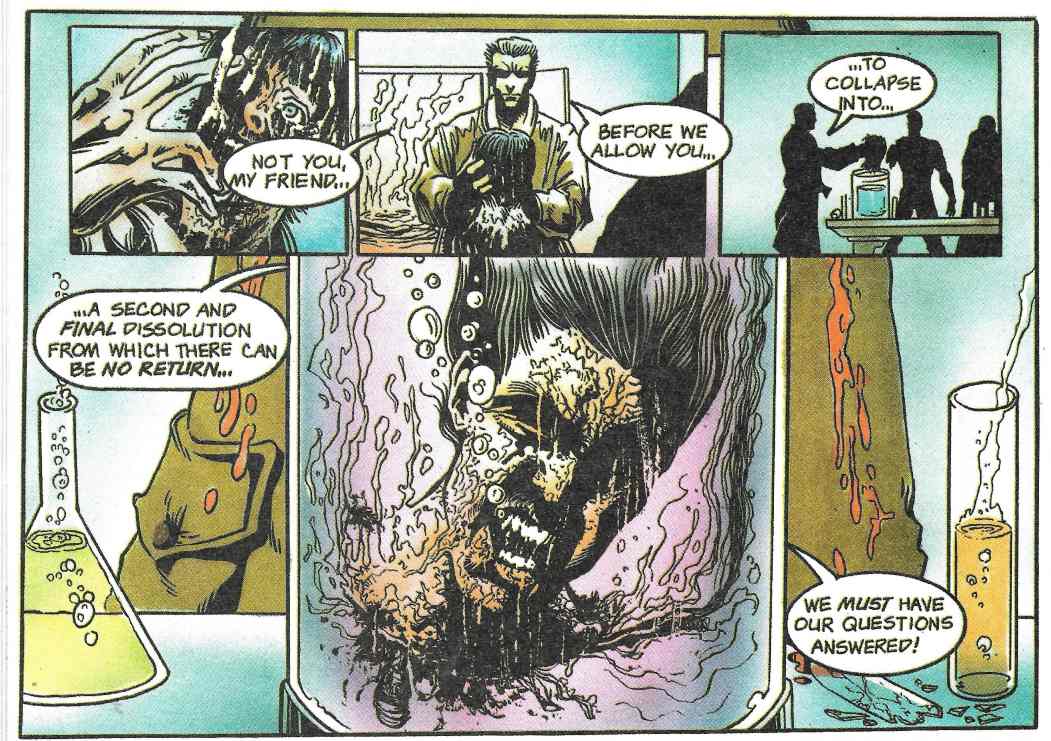 Which gives us a chance to check on Michele, who is now drawn to the snowy beach…(are their beaches in Arkham? I thought the town was a bit further from Kingsport than walking could take you? Bah!...whatever) 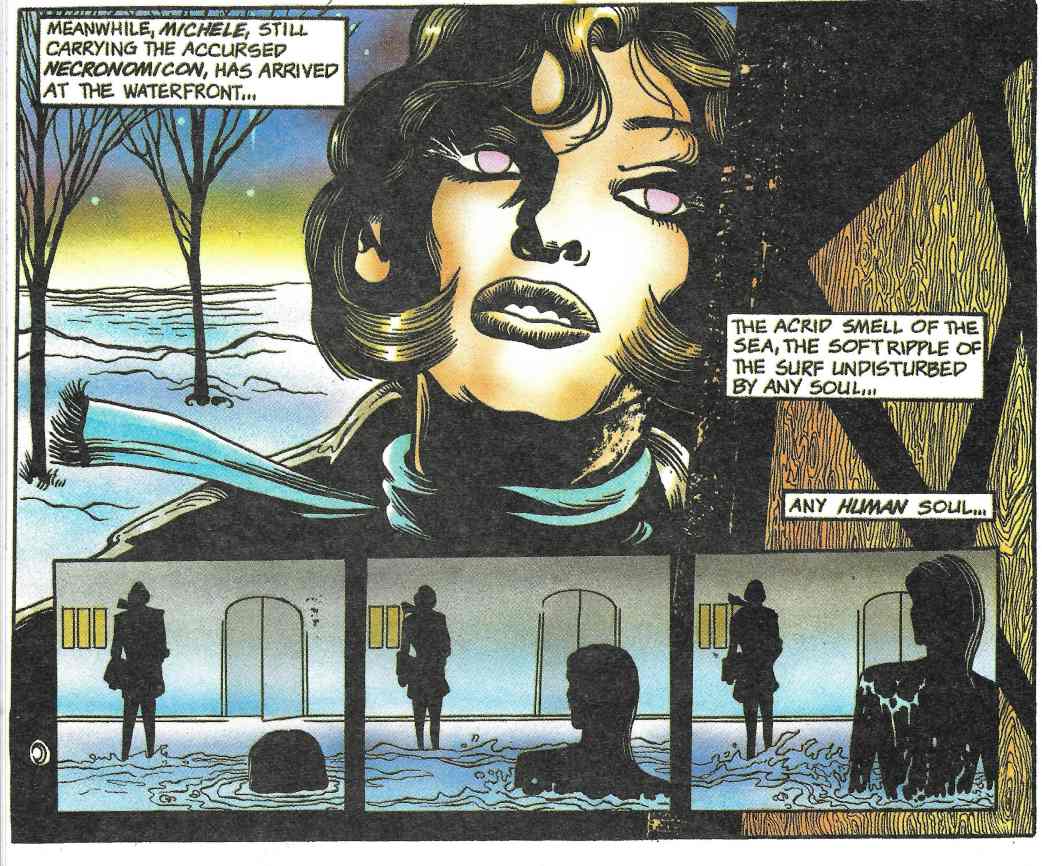 Michele greets this young woman named Ph’Ragn’ Thtul rising from the waters. Clearly a Deep One hybrid of some sort, but not as harsh on the eyes as those are usually found to be. 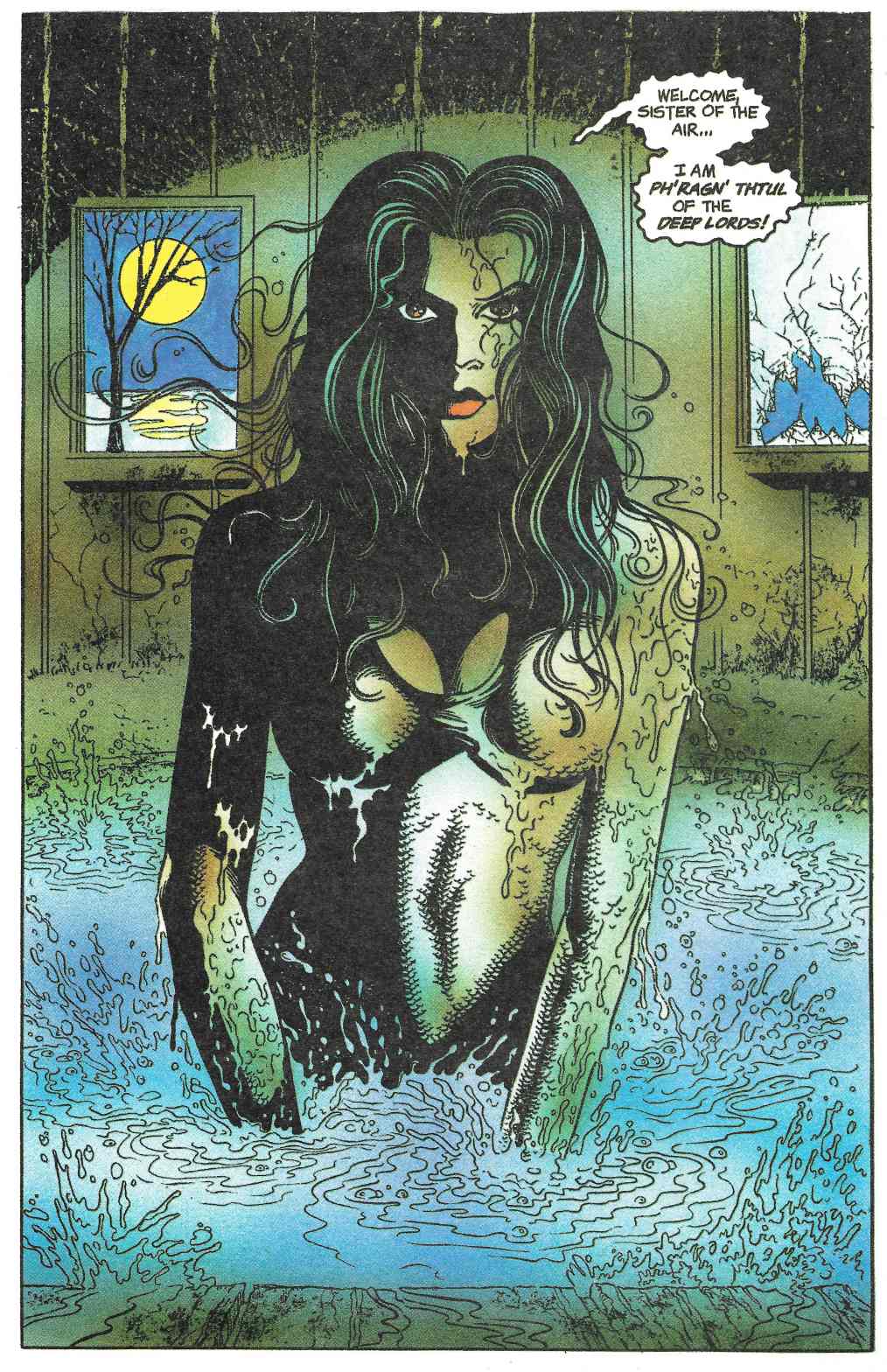 While this “Lady of the Lake” meet ‘n greet is going on, our mail contingent is interrogating the floating decomposed head in a jar. The head lets slip that this is all going according to the Superior Unknown’s supervillain plan. That while they battled the dead bodies, ‘ole S.U. got both Michele and the Necronomicon. 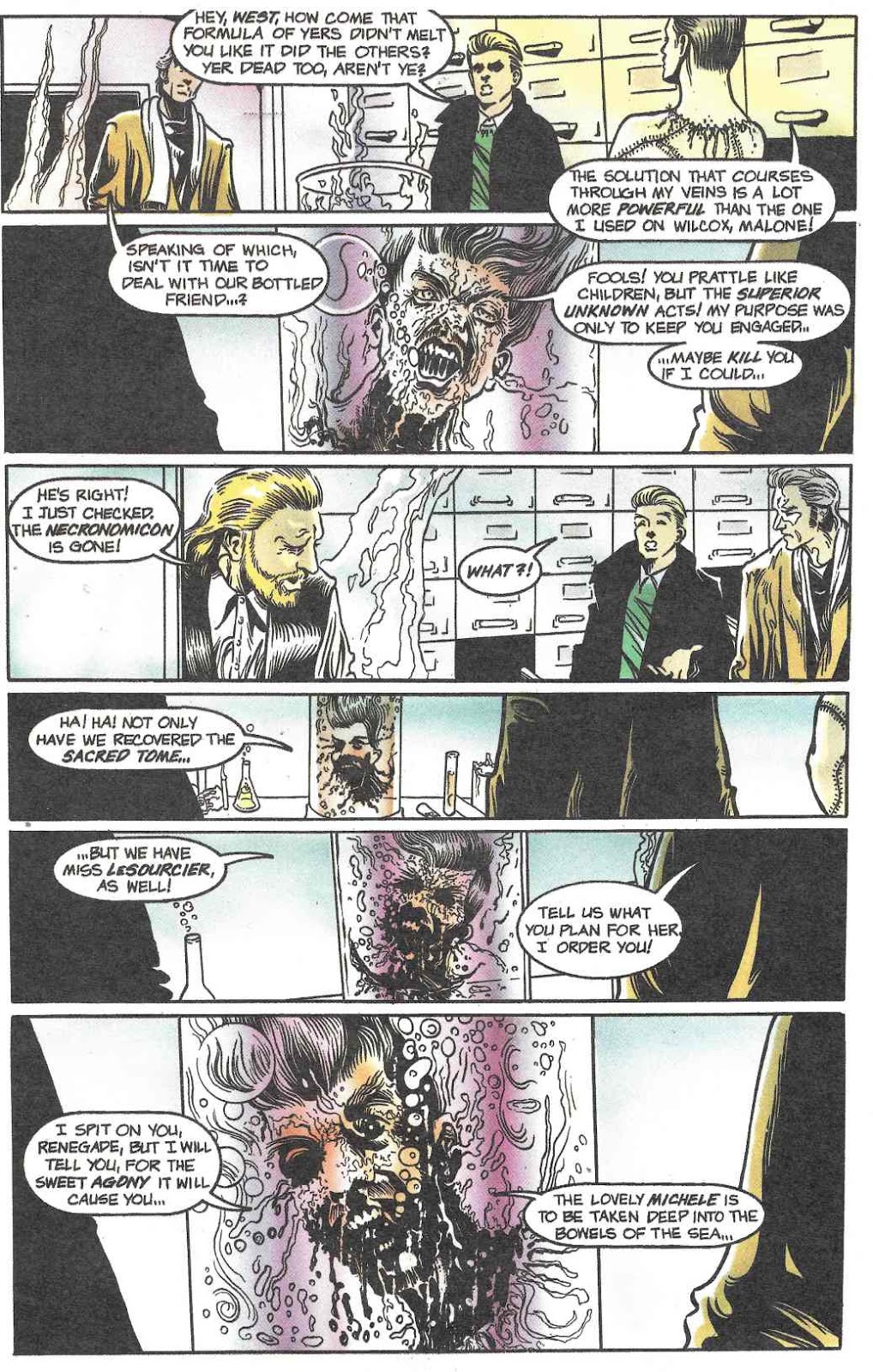 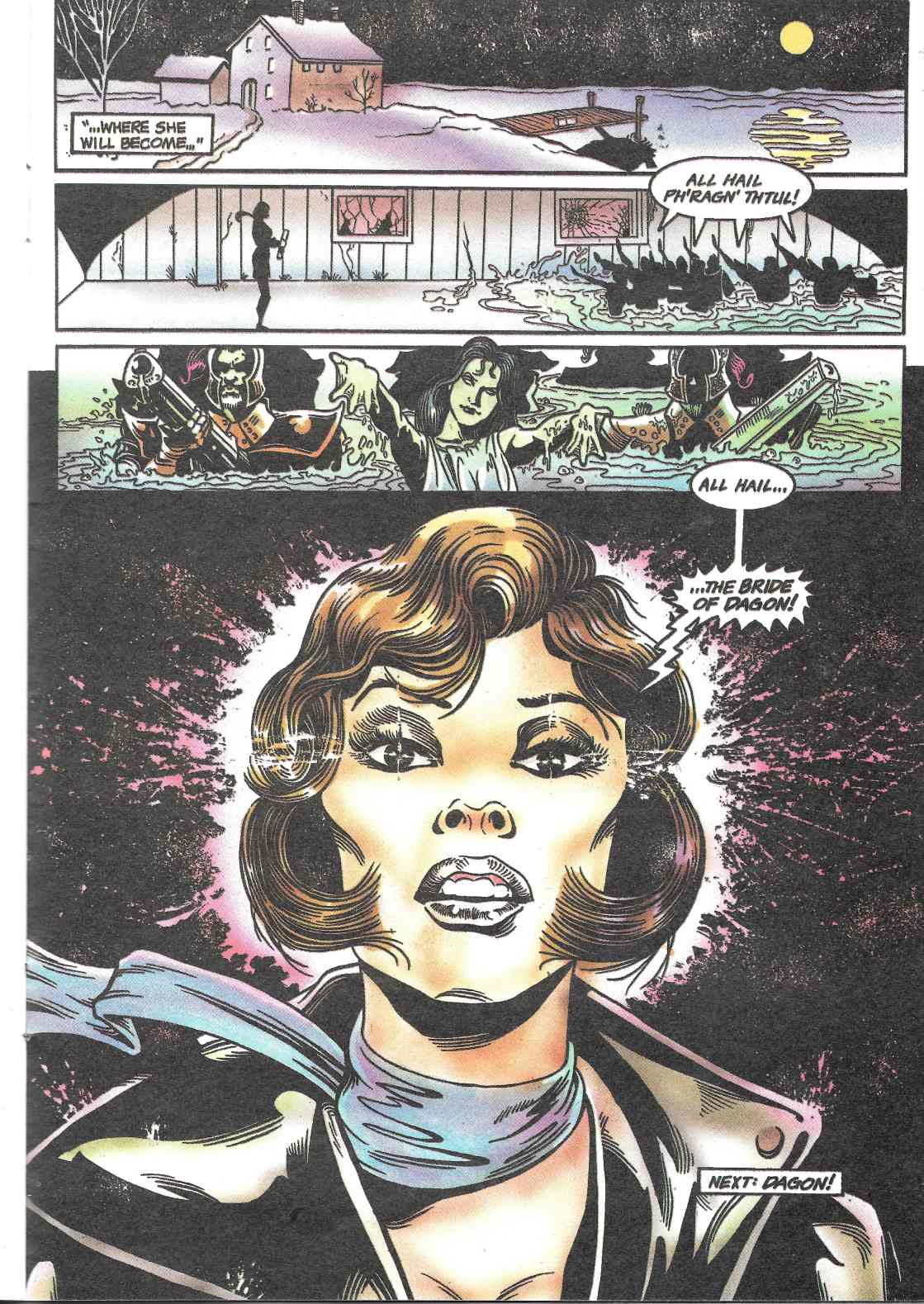 Which sounds suspiciously like the end of Neonomicon, except I’m sure our boys are going to stop things before they get too rapey. Also when did Deep Ones start to look like extras from Marvel comic’s generic army of Namor soldiers? I mean..guns? Armor? Seriously?

Again, if you are a true Lovecraftian, you will loath these books a little and possibly see your last CoC campaign mirrored in their contents. Each issue piles on the HPL WTFs in such heaps that at some point even the most patient of us will shout “STOP! STOP! I’M OUT!”

Until then enjoy the last four pages of this mess, a printed narrative about Herbert West. 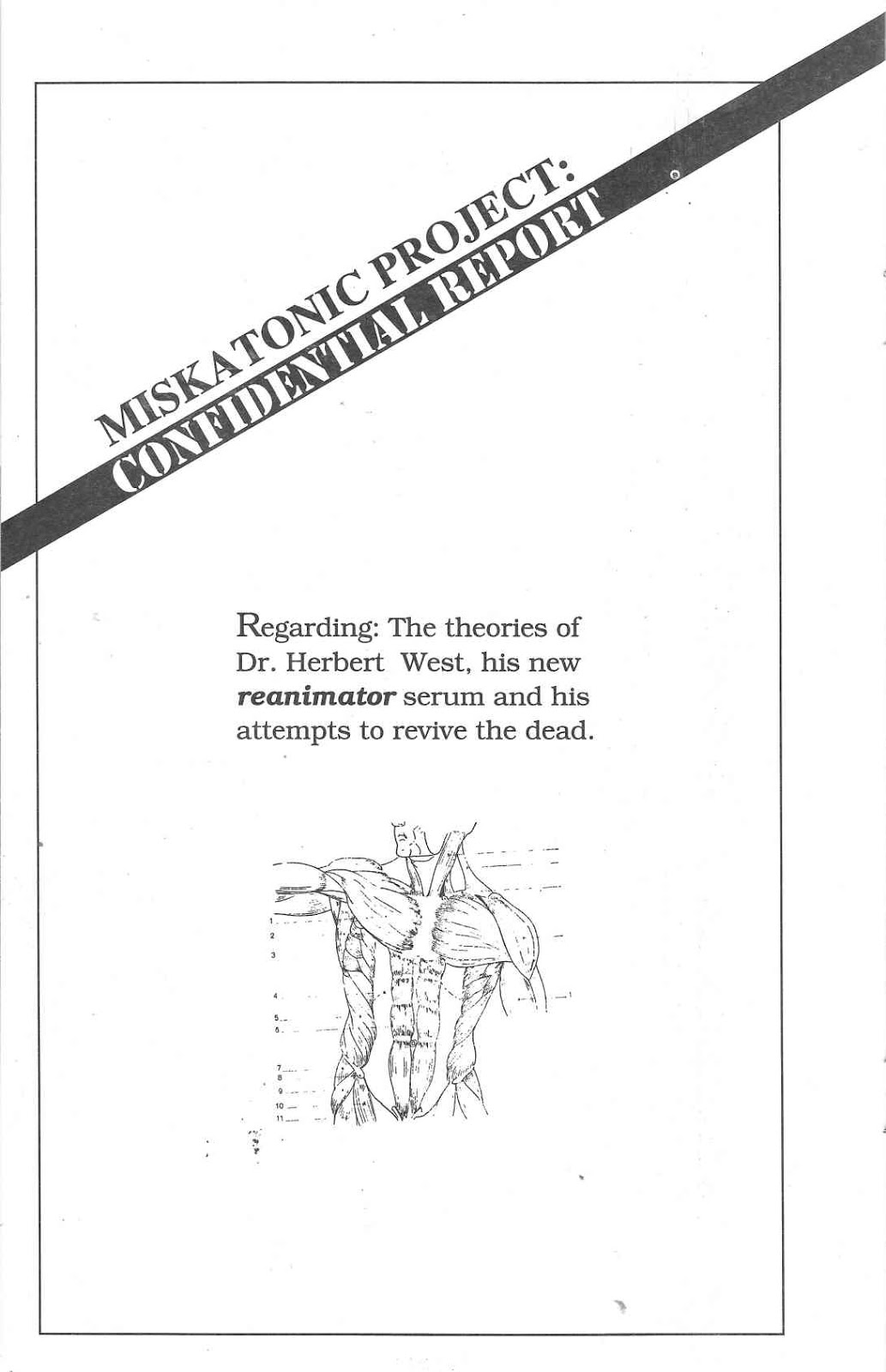 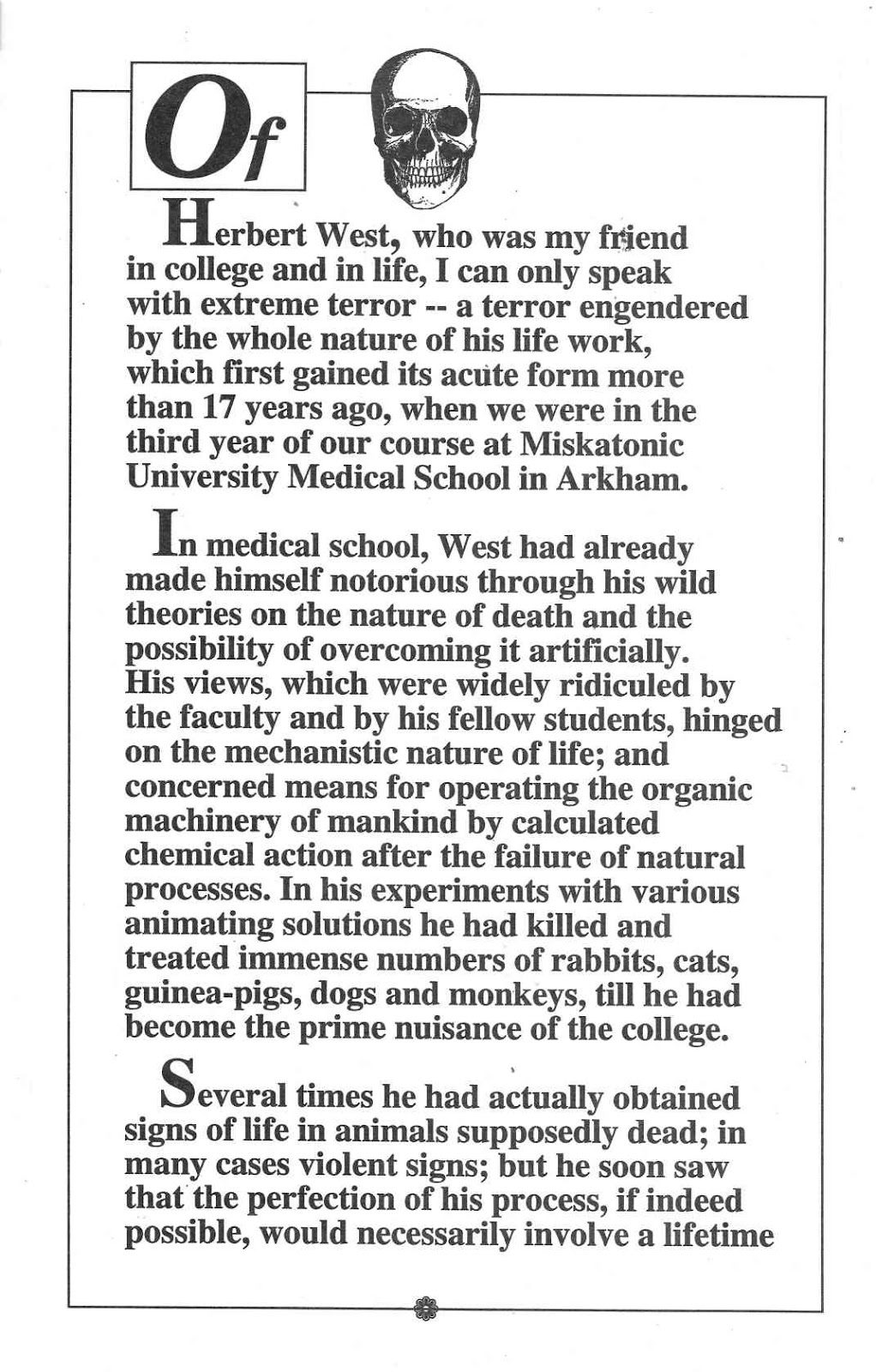 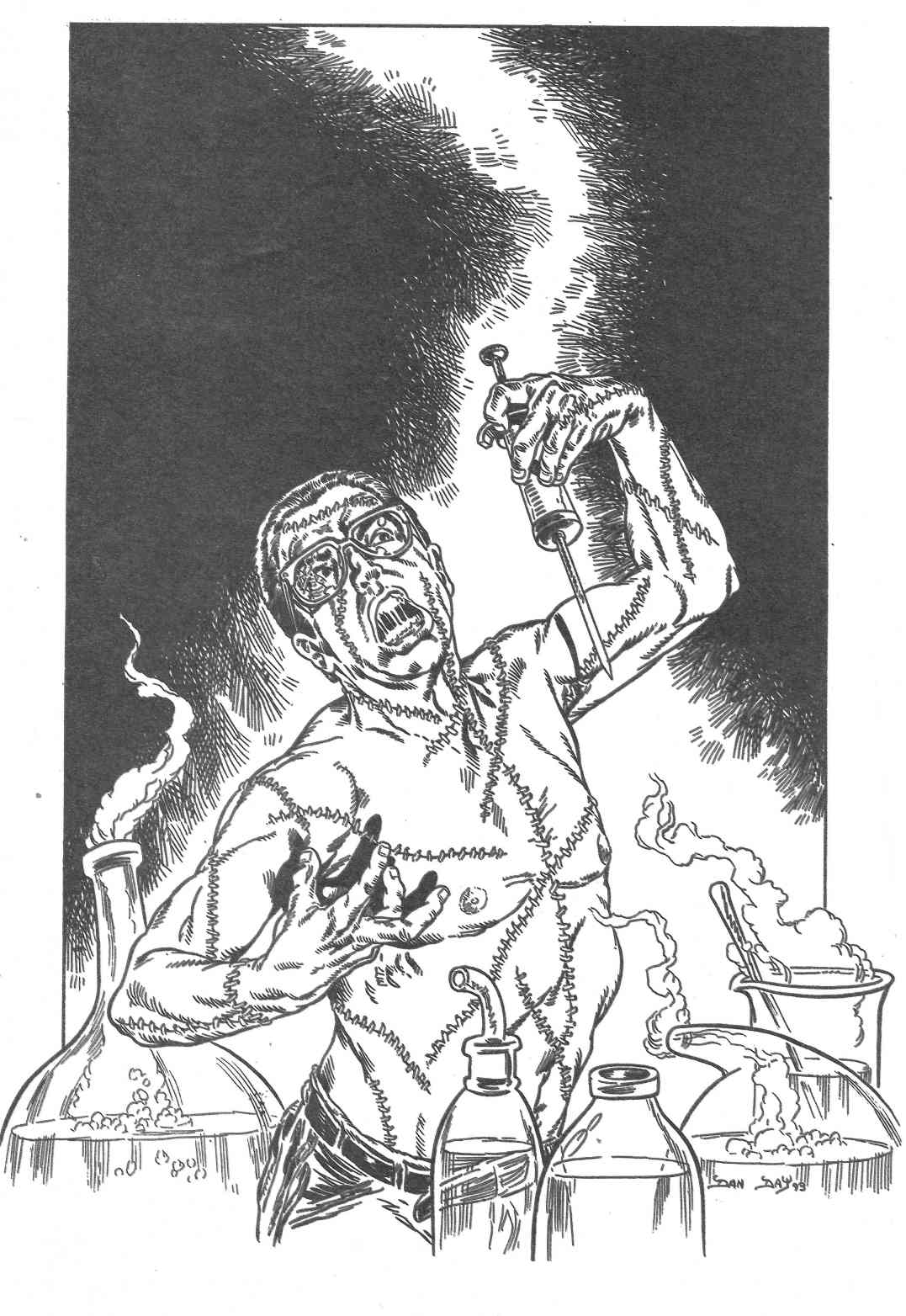 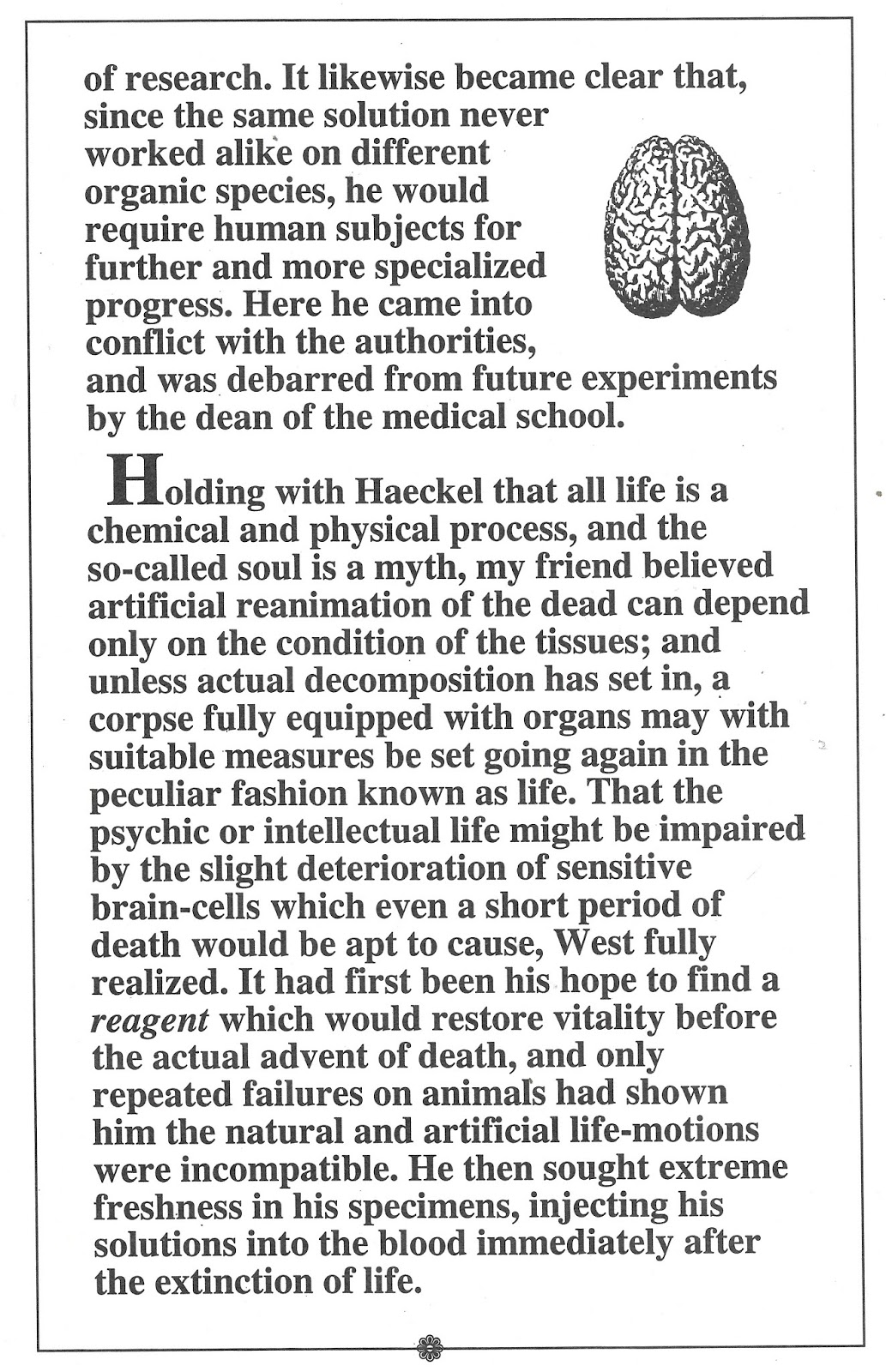 Posted by SonOfCthulhu at 5:48 PM