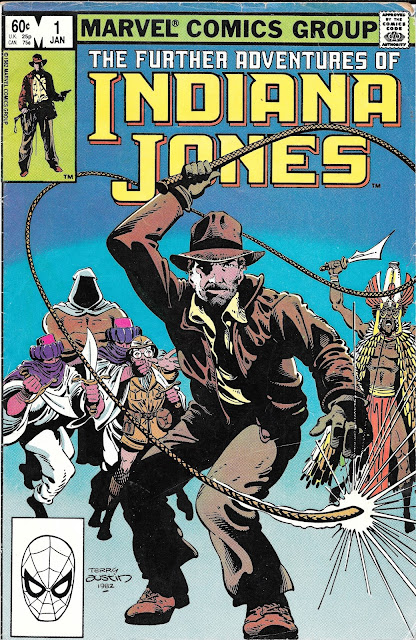 These Indiana Jones comics are definitely missing something


When I was fifteen, I received a gift of a free 12 month comic book subscription as a Christmas present. I poured over the Marvel list of titles. So many of their books were tied in to each other and I felt if I got one I would be missing out on much of the story that transpired in other titles. Also I was older and wanted something beyond capes and superpowers.


In an odd moment I chose The Further Adventures of Indiana Jones.


And from the moment I received the first book, I hated it.


To me the book felt hollow, like someone (in this case John Byrne) had taken wonderful silly and thrilling Indiana Jones tales and hollowed them out of all the elements I loved.


Okay, that may seem over harsh. Especially in retrospect. I had come to the book expecting to be swept away in the action and intrigue of what was going on. Nazis! There should be Nazis! And lots of hijinks. But most off all what was missing wasn't something the comic could provide at all.


Whatwas missing was THIS!


Yes, John Williams' score. Probably one of the most iconic pieces of filmmaking music ever. A march that pulls you in and sweeps you up in such a way that you feel the majestic adventure playing out before you. No, more than that. It is a theme that makes you A PART of the journey. It evokes feelings of grandeur and bravery, courage and pride.


And it isn't included with the comic book.

Therein lies the problem. As Billy Joel says: "you can't get the sound from a story in a magazine…" and he's correct. Without those notes and that melody, this is just a bunch of character models running around. I just never felt it had the Indiana Jones vibe.


Many people did though, enough to carry the series on for 34 issues over three years and past the two sequels. It had guest appearances from many of the cast including Marcus Brody, Marion Ravenwood and Short Round.


We begin this issue with a very un-Indiana looking character trying to whip a cigarette out of a student's mouth. John Byrne is scripting and penciling and I should cut him some slack here. The second movie didn’t come out until the following year. However even seeing the first movie should have clued him into the formula to follow. 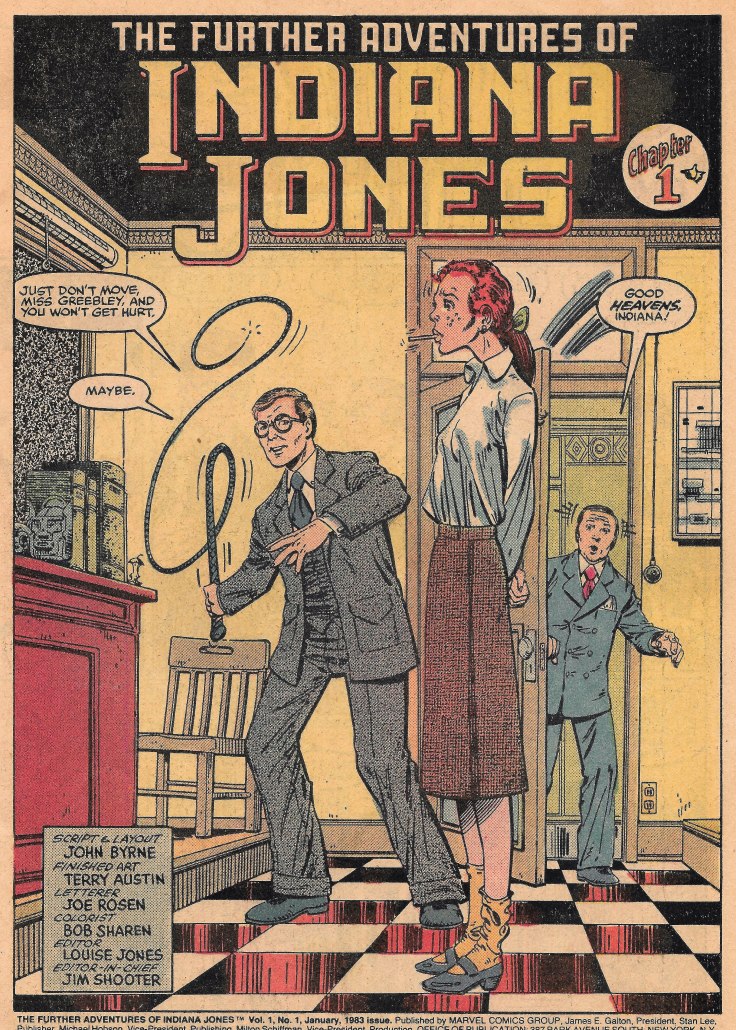 And the first rule of that formula is you don't start an Indiana Jones story off with something boring.


Instead we get a cold open. Indiana Jones is bored and is endangering his students to show off his whip handling skills. It is a lazy way of introducing him to this series. And kind of makes the character unlikable. 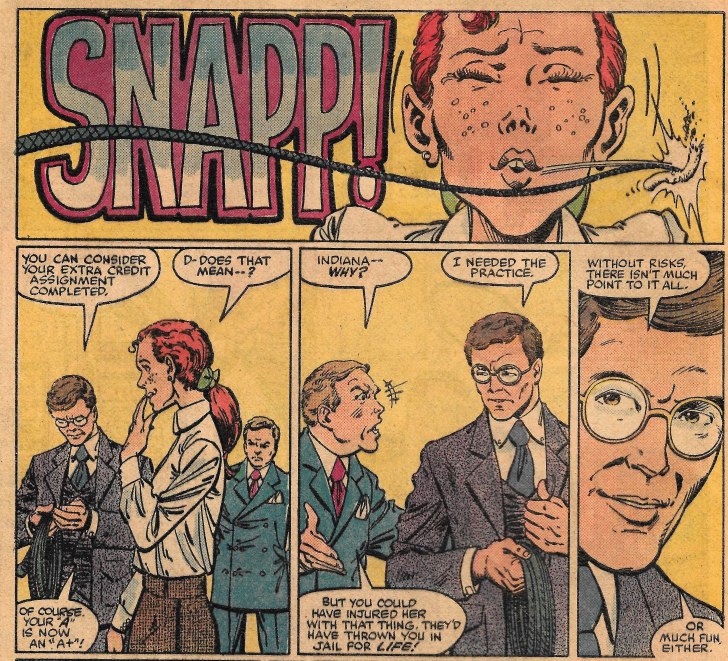 Byrne is using some very standard models here as I'm sure Harrison Ford's likeness isn't something up for grabs. So we have generic human stock figures, which is sort of a letdown.


We get this "risk is its own reward" or "without risk life isn't worth living" nonsense and then Marcus remembers an old friend/former student of Indy's is what led him down here. Seems the fellow came looking for some help with an archeological site he found with his sister's help. 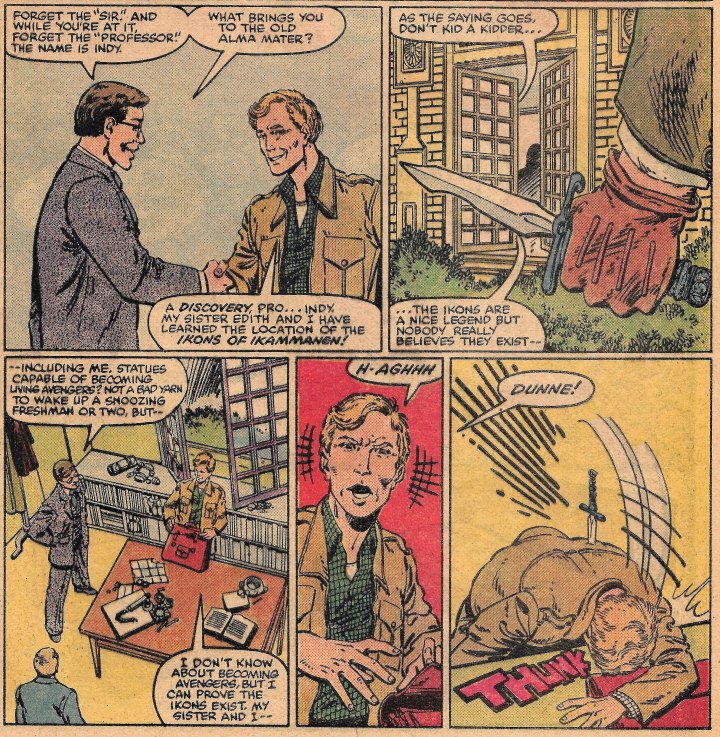 …Annnnnd he's dead. Someone sure wants to get those Ikons of Ikammanen. Every time I hear them mentioned, I think they must be some kind of weird emoji or something. 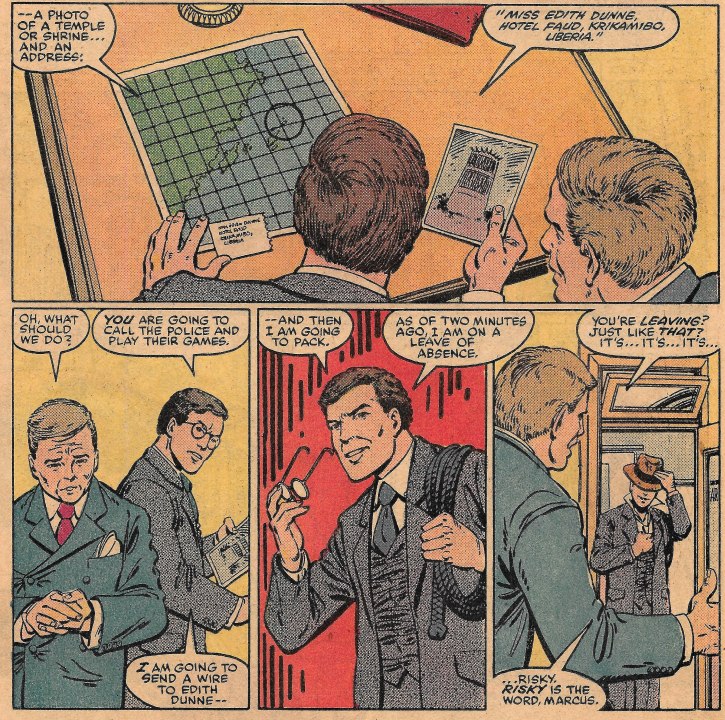 Either way, hidden in his dead friend's backpack is direction to where the Ikons are located, so Indiana leaves Marcus to clean up the mess and takes whip in hand off to raid those tombs. Little callous there, Indy. 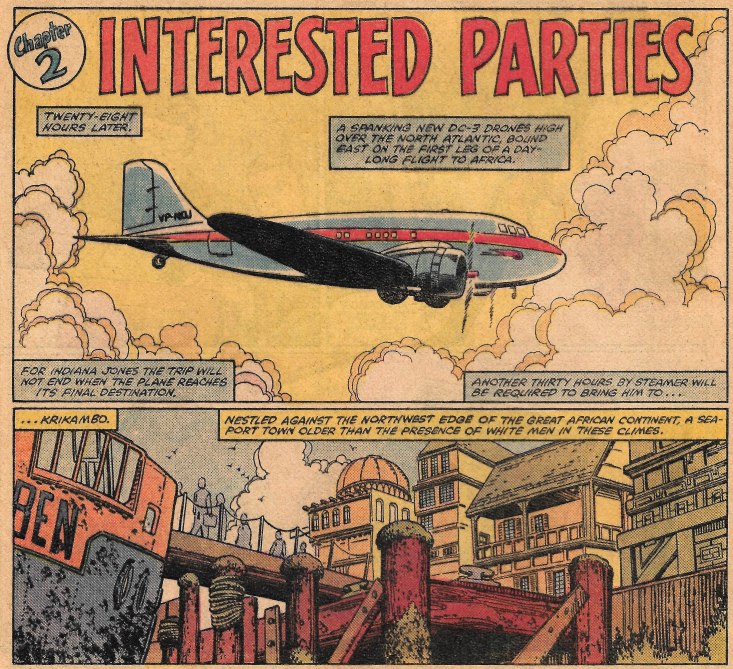 We get a brief scene transition showing Indiana taking a plane to his destination and….yes, the map with the red line is missing. That's just it: these issues were devoid of the flair that made the movies so much fun. It is static and boring by comparison. Such a shame as Byrne is usually a terrific judge of storytelling. 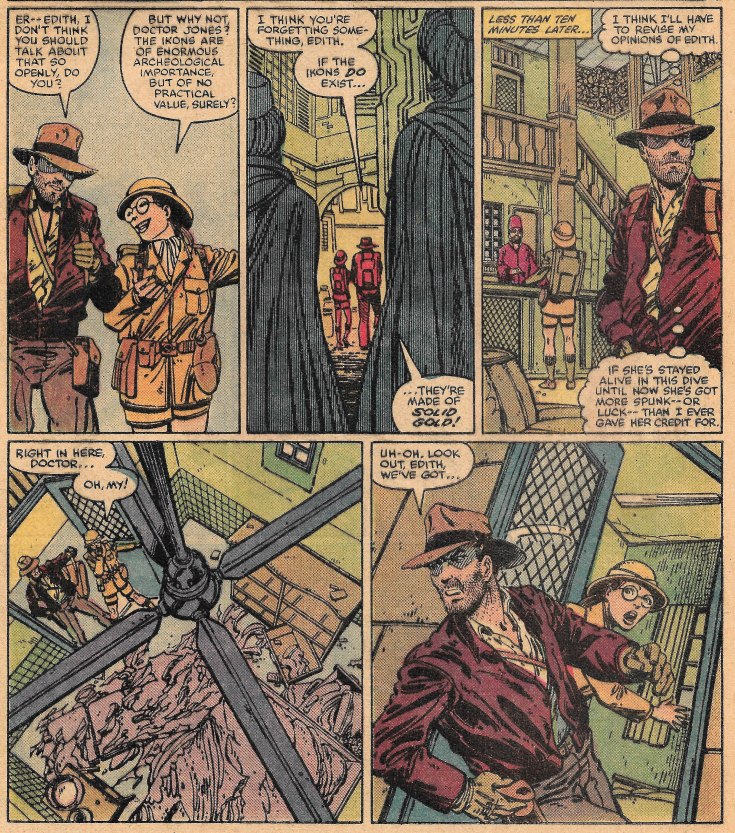 My son mentioned this to me today when I showed him the issue: he said that Indiana Jones isn't a real archeologist. Real archeologists try to persevere everything about a dig or site. Not just the bits with monetary value, but all of it. He's right. Indiana is pretty much a dick to history. Edith appears to be more in the right mindset here. 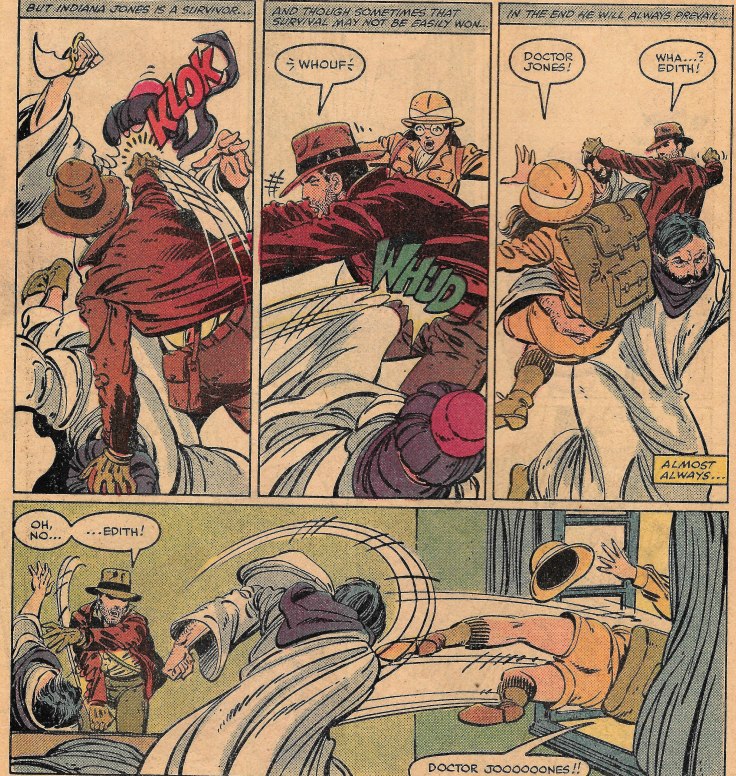 However not much time to worry about that as they are accosted by generic robed thugs from backlot 23B in a sequence that unlike most of the book has some really good action to it. Love the way Byrne captures some of these motions of the robed figures battling Indy. NOW we are talking. 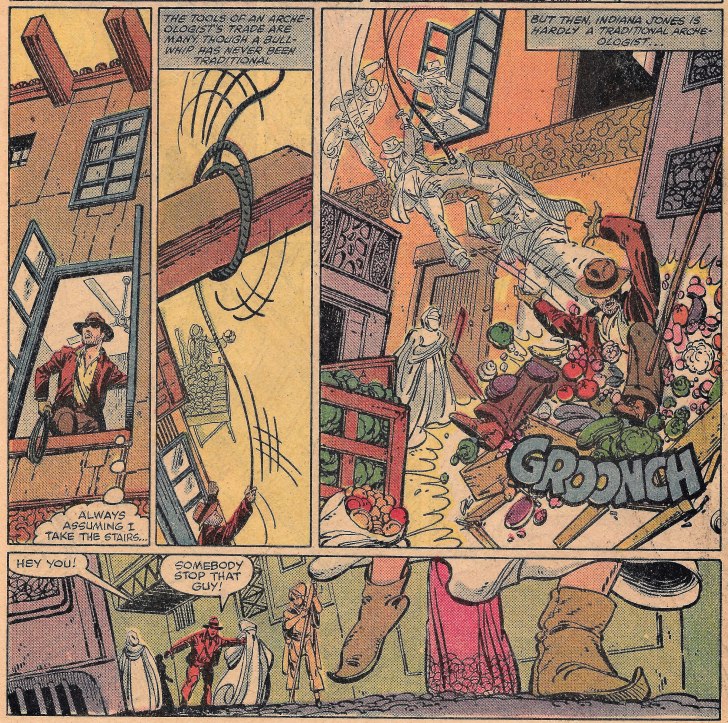 Edith is captured by someone waiting below the window and Indy gives chase in another series of panels that almost has me forgetting our false start.


The chase comes to a dead-end… 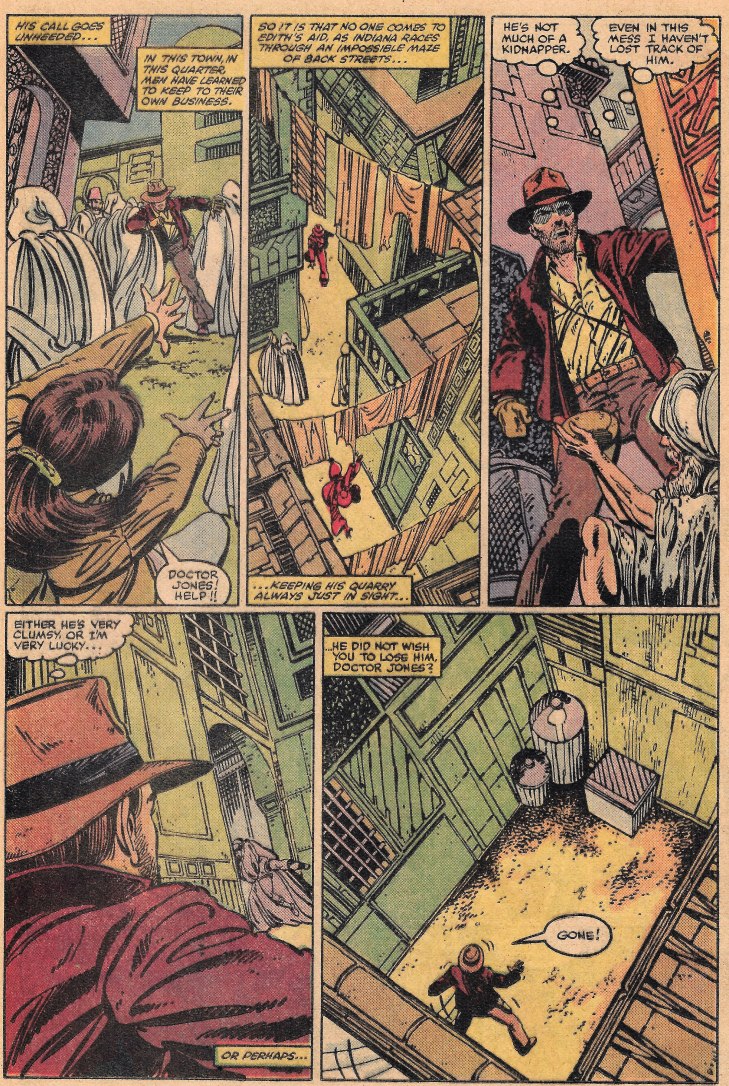 …that turns into a trap door funhouse ride depositing Indy… 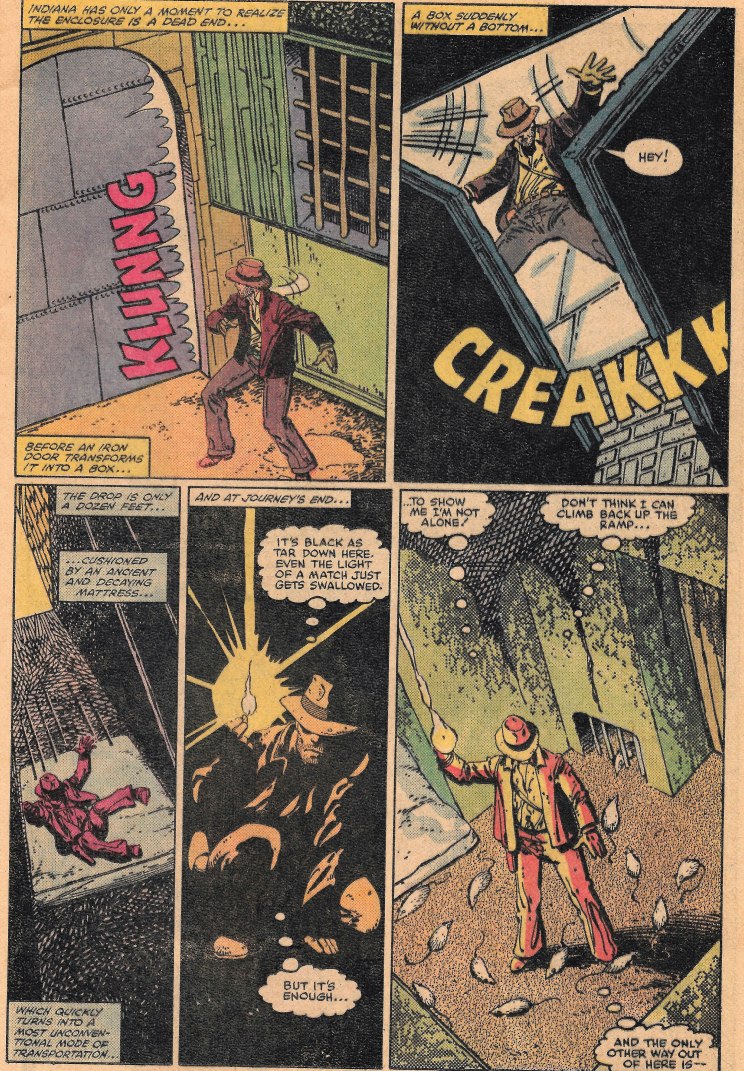 …right into the lair of the villain of the piece, a man by the name of Solomon Black. 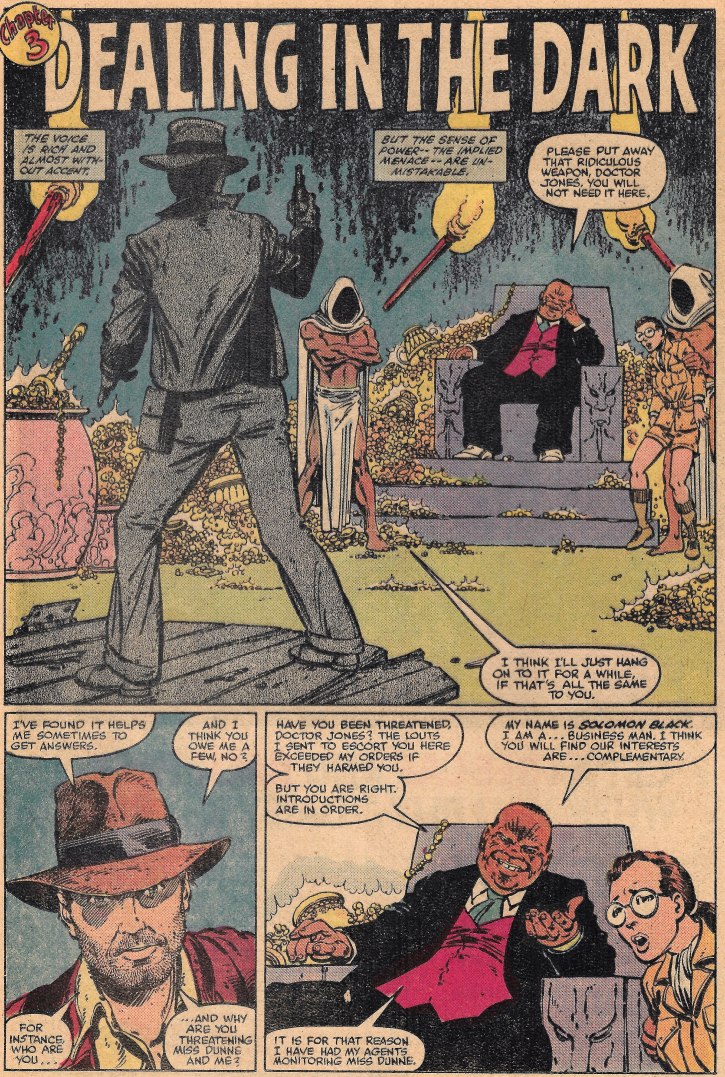 Solomon looks like a Bond villain here and it is obvious he wants the Ikons for their valuable gold. See piles of it shining behind him? Indy is forced into a partnership with him or else he will be made to watch the white robed assassin who kidnapped Edith open up her throat. 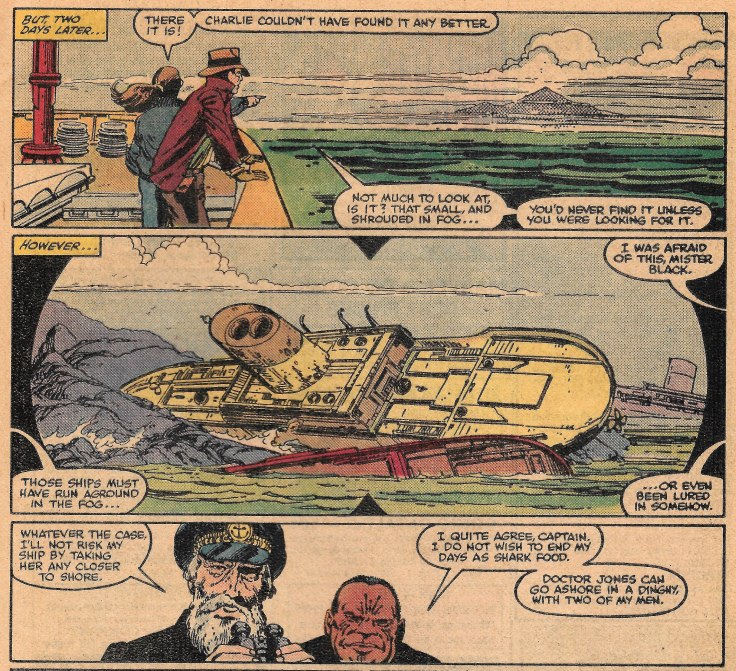 So days later they are off the coast of the island where the Ikons are located, only to find it a shipping hazard. Indy, Edith and two guards go ashore. 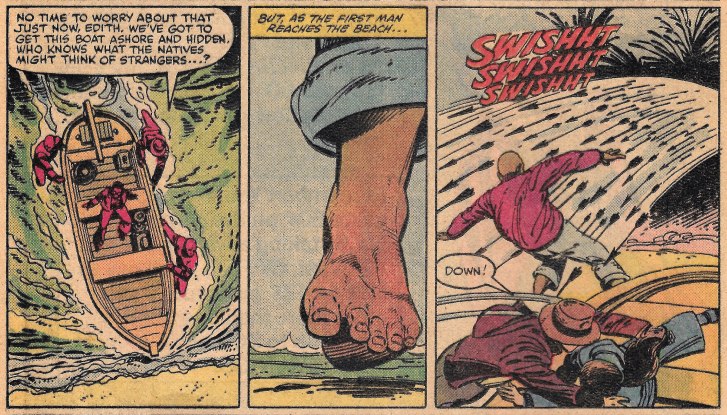 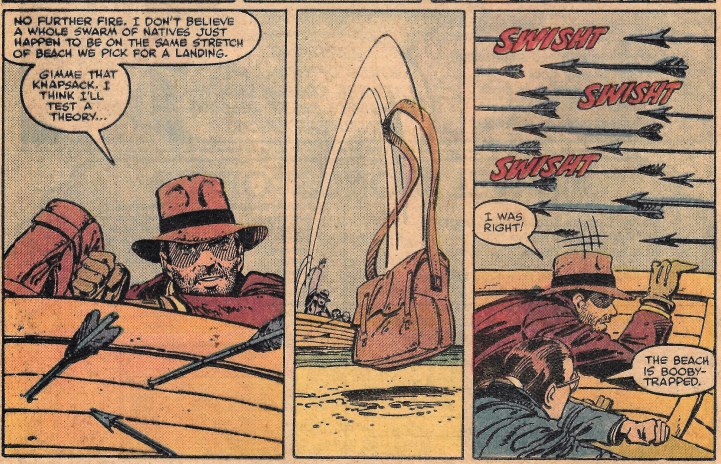 …only come to find out via Indy that it is just a booby trapped beach. 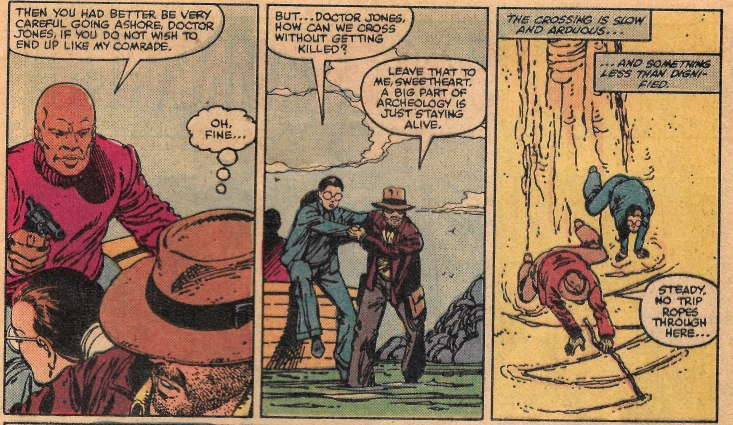 While the guard stays behind, Indy and Edith find this odd shaped temple thing that…wait a minute! 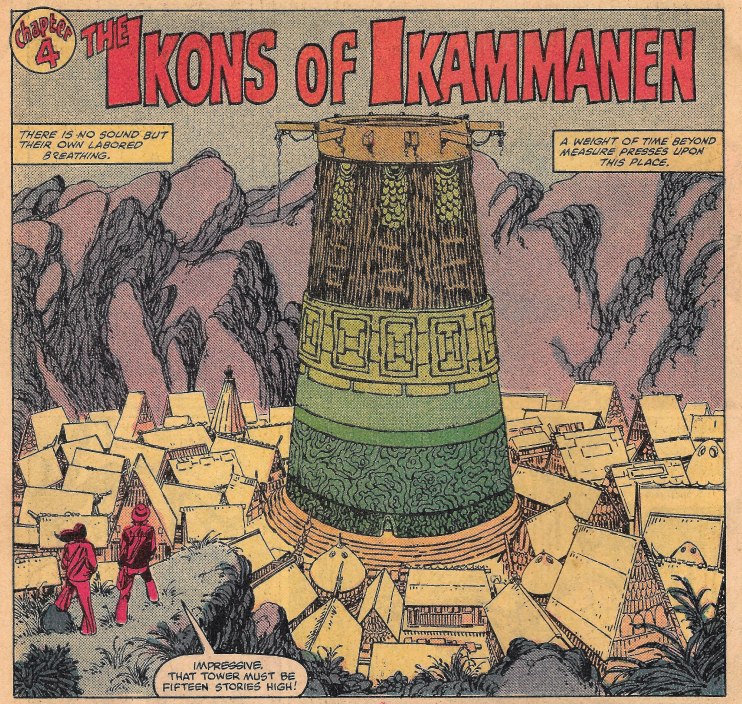 Hmm? Could Kingdom of the Crystal Skull be stealing from the comics? 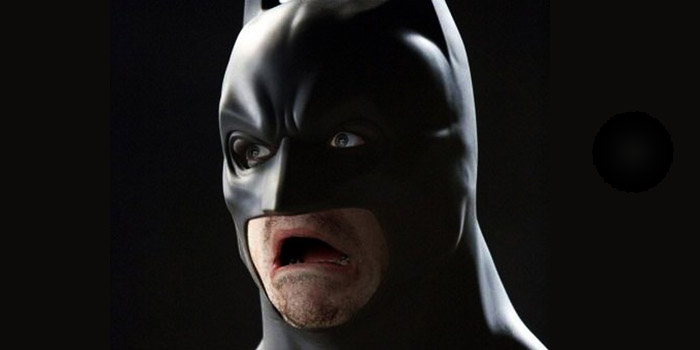 They enter a chamber where the Ikons are located and…wait! 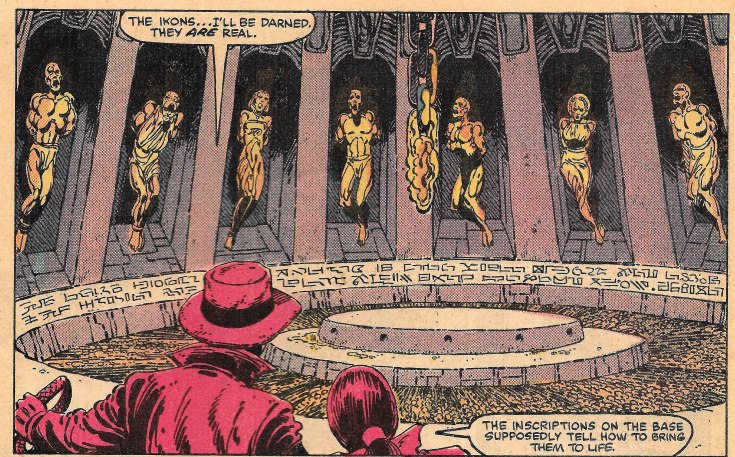 Am I alone in this, because seriously?

So someone is totally stealing ideas from this book for the worst movie in the franchise. Only those bodies in the above aren't aliens. They are… 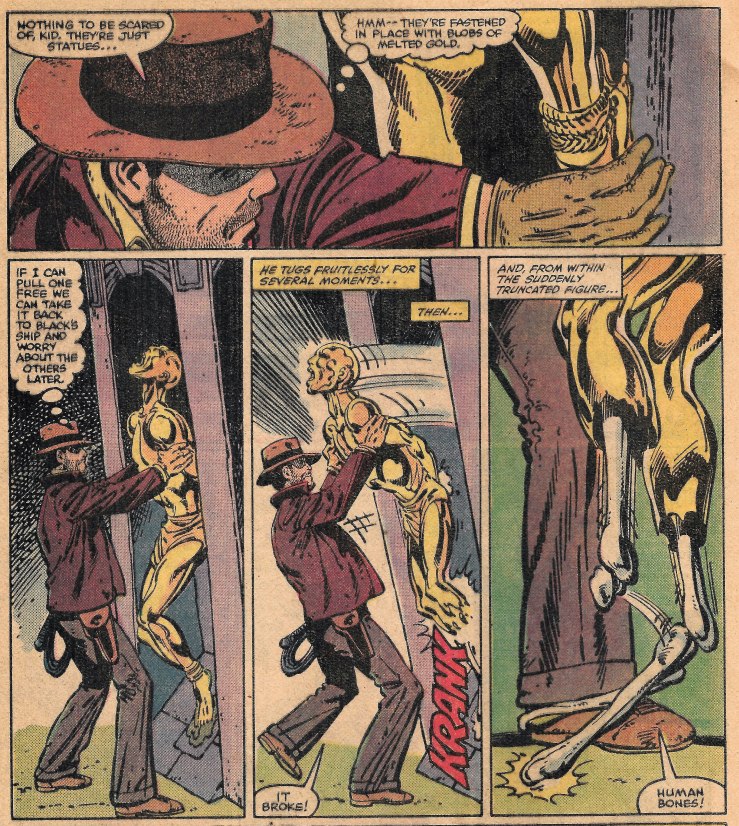 Ikons of Ikammanen are people!

People dipped in gold the same way cake balls are dipped in chocolate. Except with more molten death awaiting the people. Just as Indy finds this out, but he and Edith are conked on the head, knocked out and trussed up by some VERY old Ikammanen natives. Who proceed to explain the process of making new Ikons by way of example. 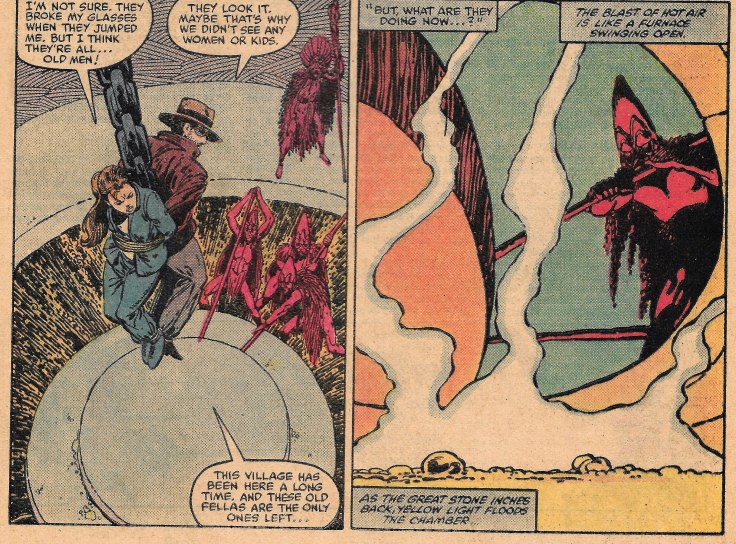 And as we being the slow dipping mechanism, the issue fades out with a "To be continued…" 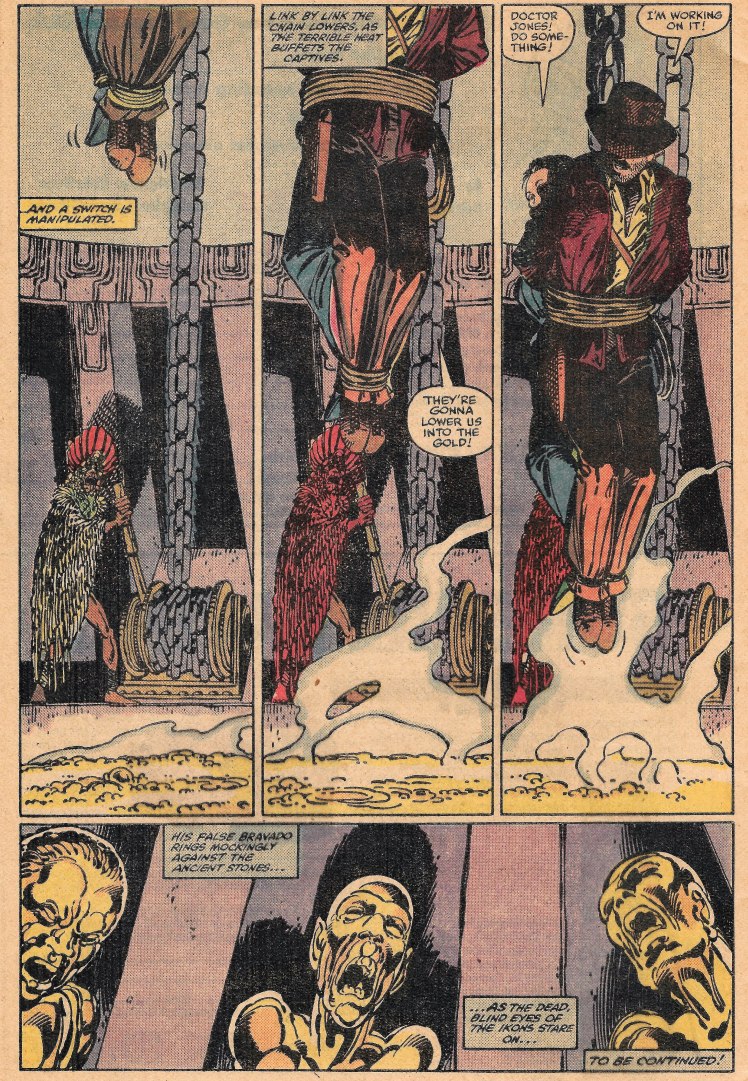 So how do we rank this one? It doesn't feel like Indiana Jones really. There are moments that make it, but they are few and far between. It misses that all important opening on an action piece structure that made the movies so fun. It has a boring beginning and that is almost unforgivable.


Is Byrne capable in this? At times, yes. And at other times he appears to kind of mail it in. This should be over the top action from start to finish and I feel it only reached that in the ambush at the hotel. His artwork is fine for the most part, but doesn't evoke the crazy franticness of the movies.


So story, art and pacing are all way off. And it is silent as a tomb. No iconic score to liven things up means we wait for things to pick up and run. And since they rarely do we are left a little disappointed. I remember wishing I'd spent my 12 issues on Iron Man. While revisiting here, I have a greater appreciation for the book, but still it needed work. Maybe if it has included the soundtrack on cassette tape?
Posted by SonOfCthulhu at 2:24 AM