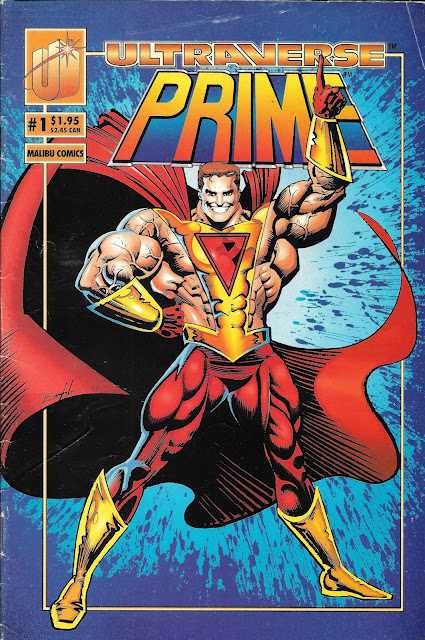 A Superman-clone book that's lite on story, heavy on mystery

For the space it occupies in the Crapbox, I really haven't given the Ultraverse its due yet.

Created mid 1993 during the boom in superhero comics, the Ultraverse was fledging publishers Malibu Comics foray into the genre of shared superhero universes. They followed the successes of Image and Valiant comics, the latter's tight continuity becoming a model that the Ultraverse attempted to emulate.

The titles attracted many top tier talents from the big two but the storylines of the books were tightly integrated, leading to many crossovers and little autonomy for each creative team. This continual storyline was a bit much for some readers who balked at having to read titles they had no interest in to find out the rest of the story. However the books became popular and shortly after inception, the line came to dominate Malibu's catalogue.

As the mid-90's decline came about, Malibu was bought out by Marvel comics, mostly to prevent DC from doing the same. The Ultraverse as a line of books saw cancellation. Only a few titles and some one-shot crossovers were issued after that, most of them not lasting very long. Of note, the book Ultraforce did last long enough to have a short lived cartoon.

Prime was one of the initial books Malibu, released alongside titles Mantra and Hardcase. I immediately thought "Superman-clone" when I looked at the cover and I was really a smidge off in that regard. See if you can figure out what Prime's real architype is from this issue. 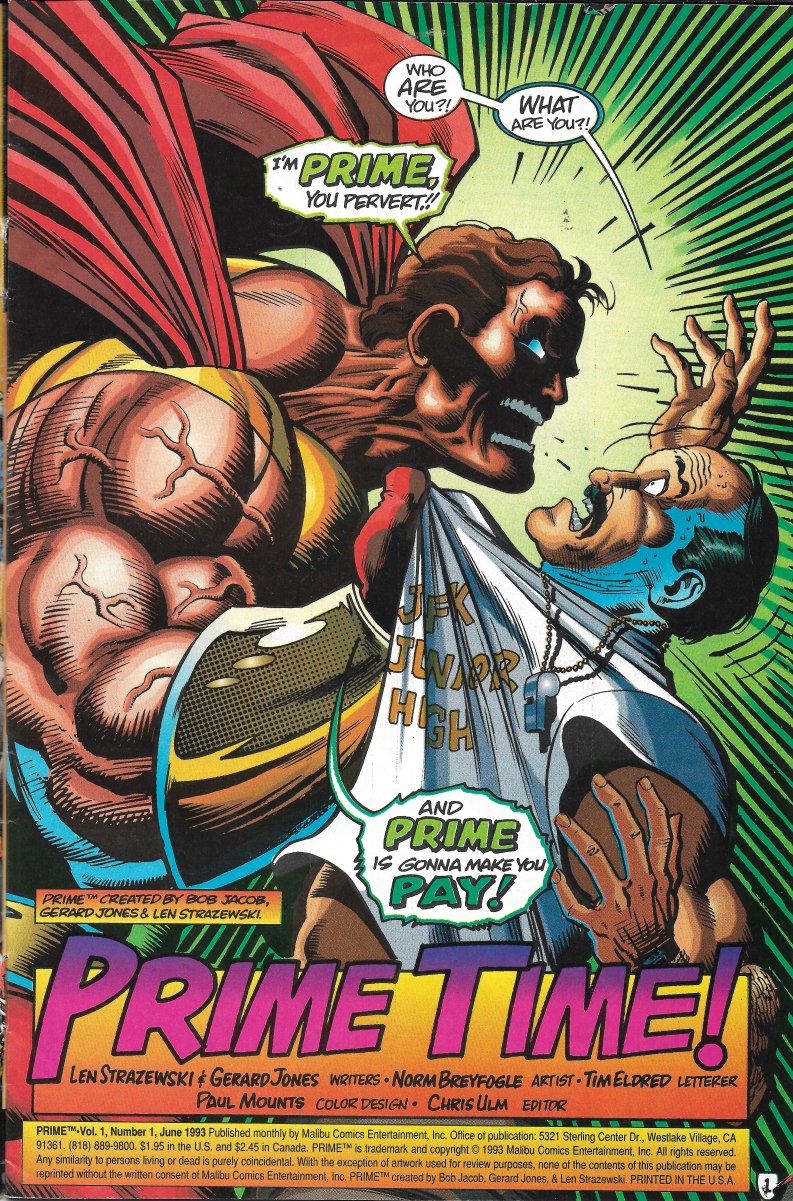 We begin with a giant splash page of Prime threatening a guy in a manner VERY un-Superman like. In fact this reminds me of Supreme at his most violent. The fact that we never see Prime kill anyone is the book's saving grace of not having him go that dark, however. We do get a "bully" sort of vibe to the character. Let's hope that gets better. 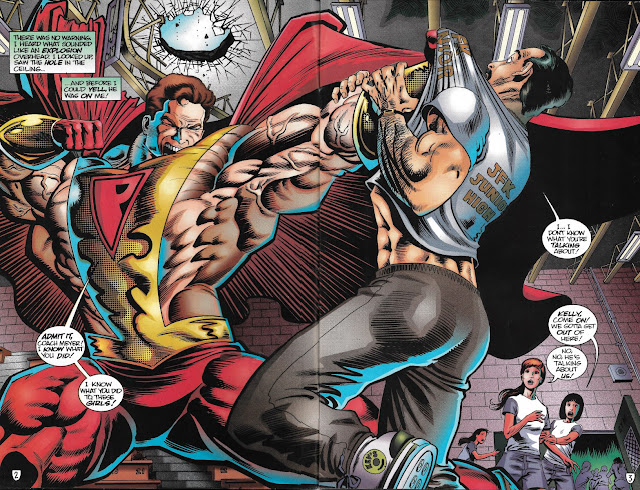 On the next page is sort of does. By the way, check our Breyfogle muscling Prime all up in that over-the-top Bane manner. I dig it.

I'm stating it gets better and you probably aren't seeing it. It gets better because the story moves into first person accounts by the victims of Prime's assaults. Not only that, this first account by a coach that Prime accuses of molesting several high school girls, recounts how poorly prepared for this the super hero is. 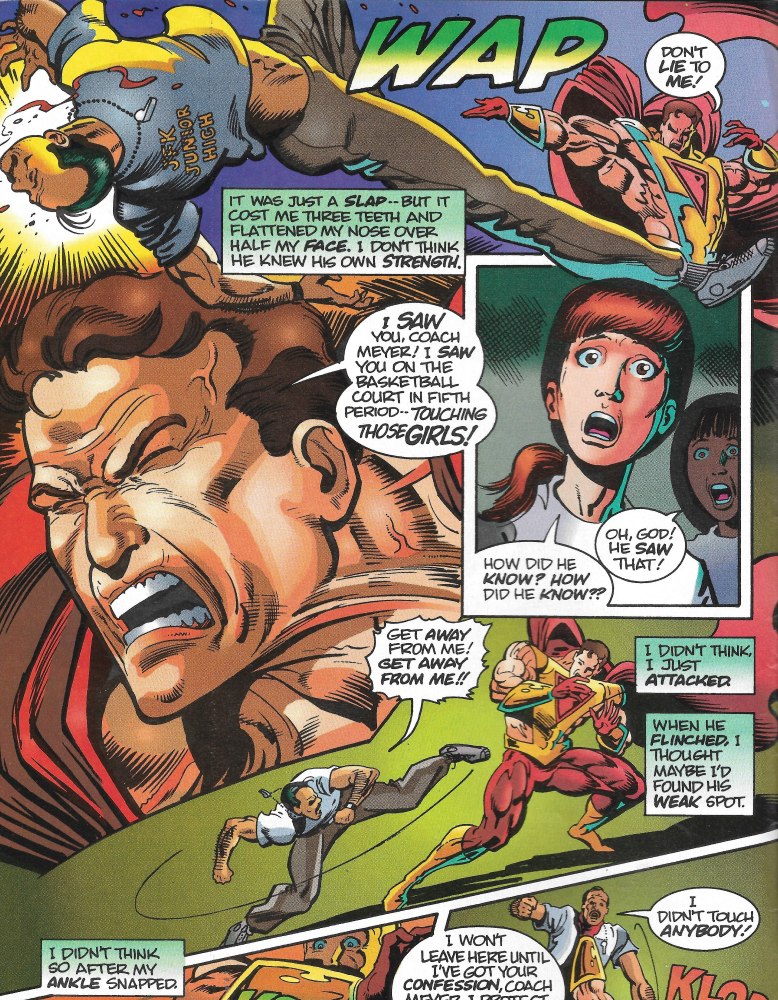 Prime is so new to this he doesn’t know his own strength nor what he can endure. The coach is a martial arts expert and he comments that Prime knows nothing at all about fighting. This is a costly thing, because Prime is much like a bull in a china shop. 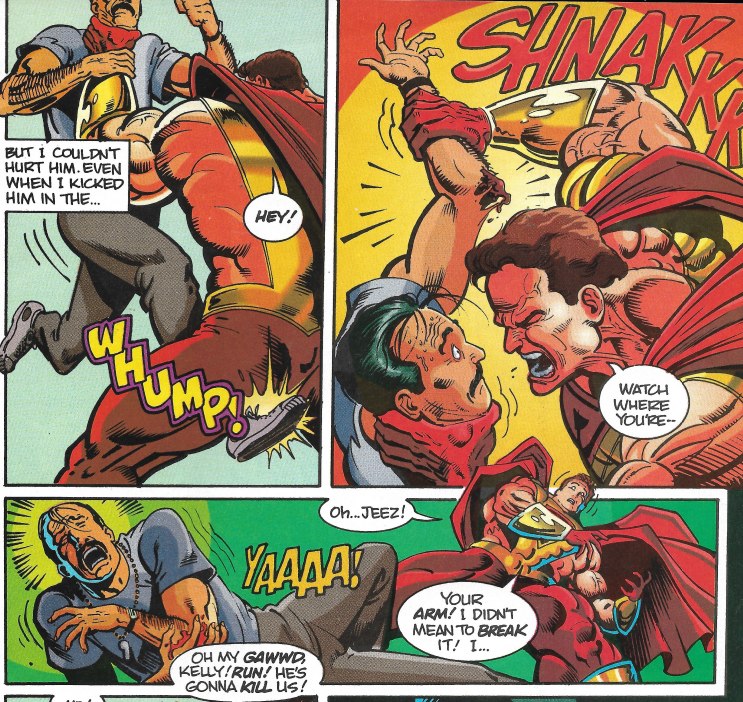 Prime freaks out the very girls he is try to shield from this guy. Not too swift at following his own "Prime Directive" of "protecting the innocent and exposing the guilty." Only thing he's exposed here is this guy's radius and ulna to open air. Note how upset Prime is by the accident. You can tell he didn't mean for this to happen.

The account ends there, with Prime trying very hard to reassure one of the girls that she needn't ever be afraid of him, while at the same time looming over her like a monster from a 50's creature feature.

And where exactly is the account coming to us from?

Why they are in some vault-like shadowy government interrogation chamber. Coach Meyer has already exposed his sleazier side here, bemoaning that the girls in his class would probably give Prime "whatever he wanted." Then he proceeds to wrap up his tale. 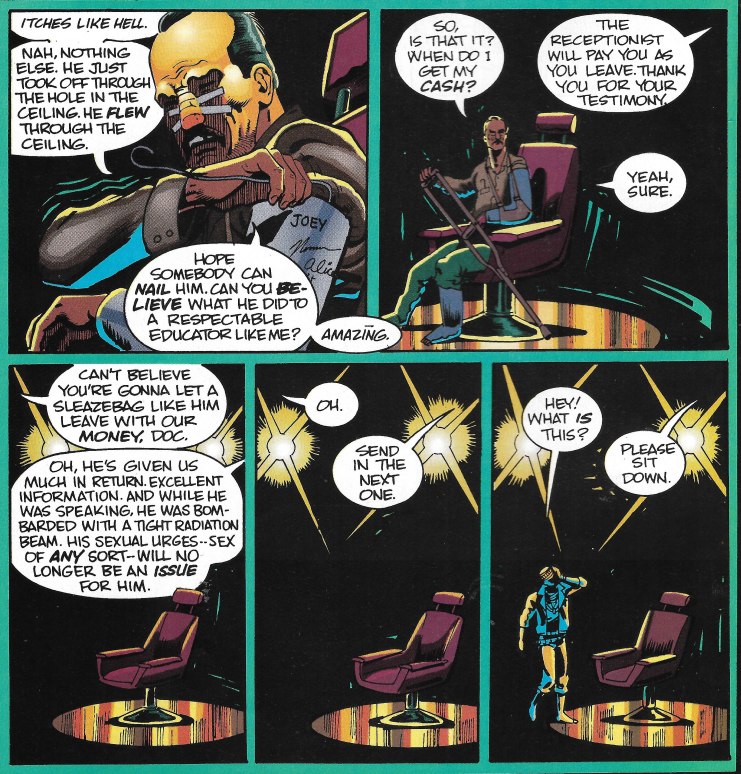 I am going to give these unseen gentlemen a little latitude before marking them off as "bad" guys. That lower left panel where the state that they've basically hidden laser sterilized that pedo wins some points however I'm not completely convinced. 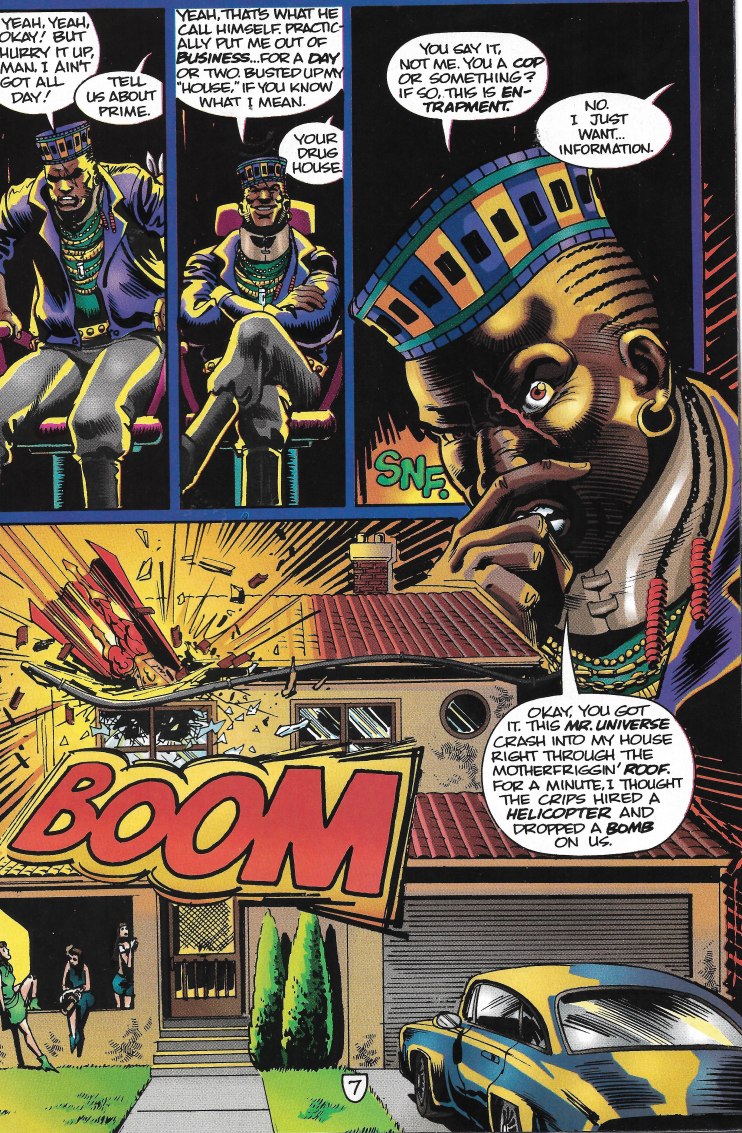 Moving on to our next Prime encounter, we get introduced to this repugnant drug dealer. He's not happy about Prime's little visit as the man shut him down for a couple of days. Let himself in without invitation too. 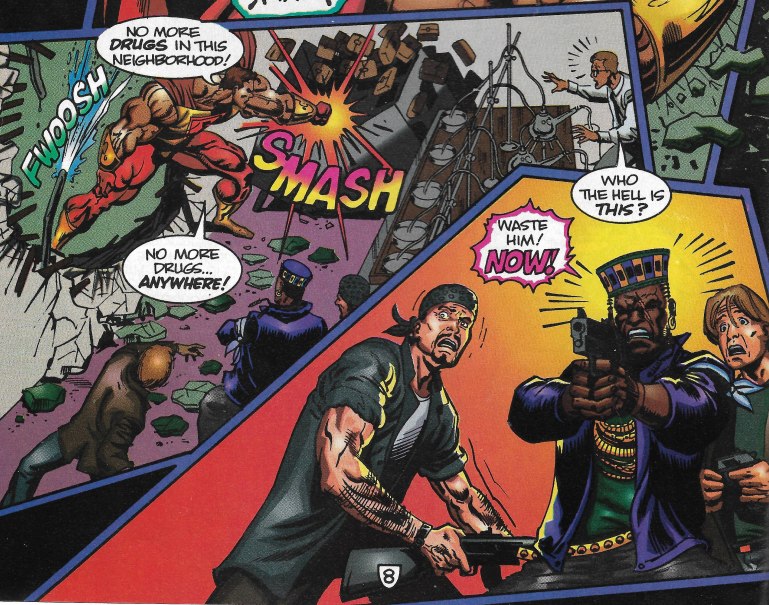 And then proceeds to bust up the place. Which would be worrying our pal in the chair if he didn't just so happen to have a few spare Uzis laying around the place. 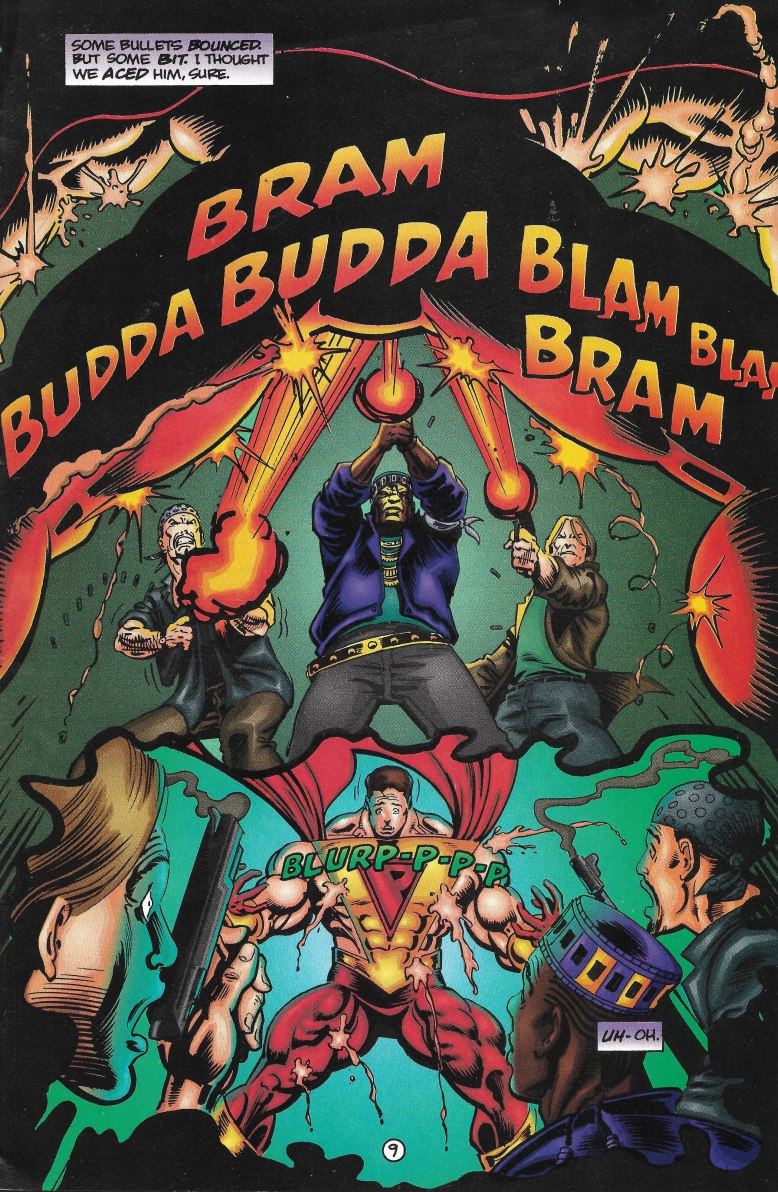 With possibly the worst sound, Prime's oozing wounds heal up. Since that did no good, the dealer is forced to pull out the bigger guns... 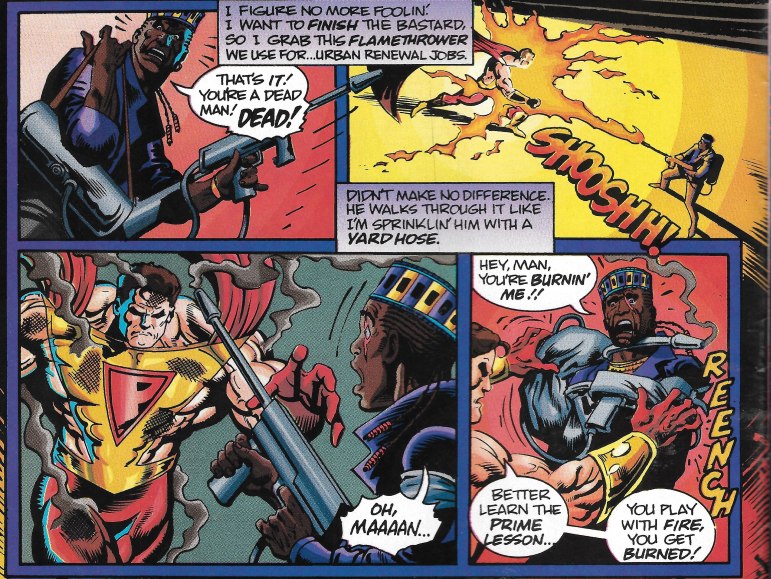 …which turns out to be not a gun at all, but instead is a flamethrower. For all the good that does him. Prime isn't even singed. Next he spins like a top and demolishes the house with the wind gusts it generates.

And then flies off. However he's left a little bit of himself behind. And Mr. Drug Dealer has it in a vial around his neck. 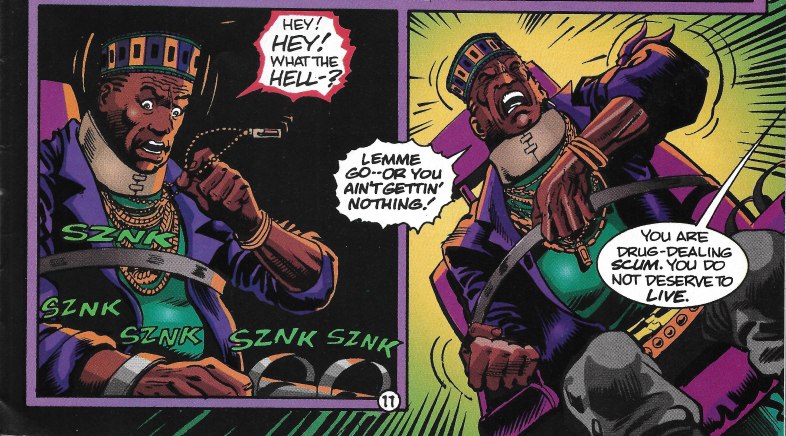 First he tries to auction it off to the men in the shadows. Just when that looks like it will work, the chair comes to life and locks him down. Looks like he isn't going to survive much longer after all. 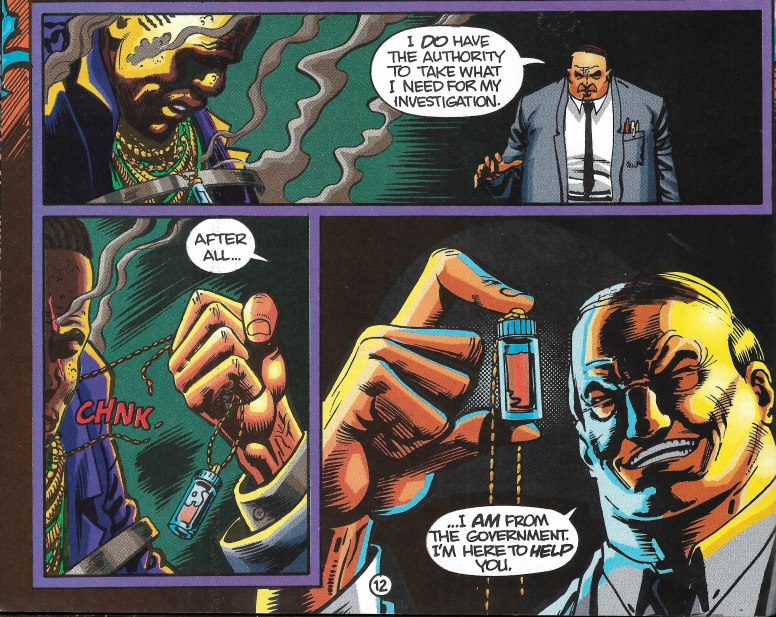 I'm right, too. They fry the dealer and then this heavy-set gentleman relieves him of that vial of Prime puss.

After those words we skip over to a newscast in progress talking about the "Ultras," superhumans that live among us, the most notable being Hardcase. 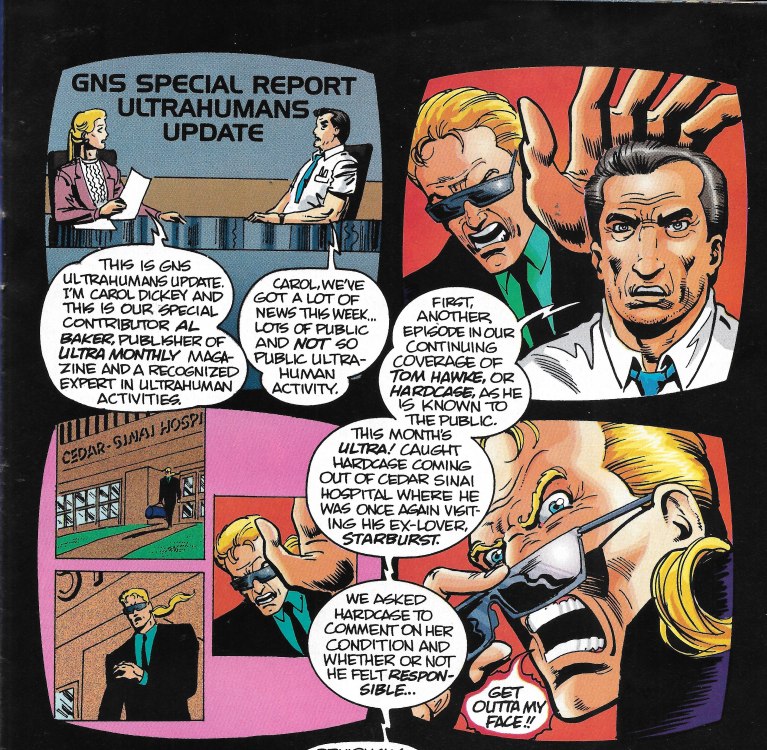 This is that "interconnected universe" that people were talking about. How the story from one book would end up with one page in a completely different book. Hardcase had his own magazine, starting around the same time, so while this looks like namedropping it isn't. What it is doing is setting the stage for these characters to appear in each other's mags on a reoccurring basis for marketing purposes. 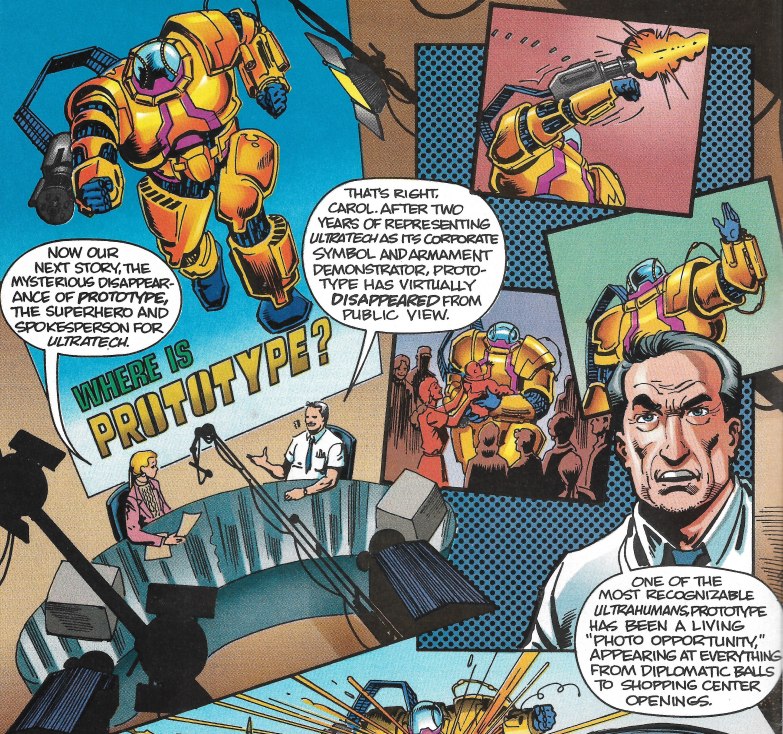 Need more proof of this? The next news story is on Prototype. Guess who had a series starting right after this?

If you guessed Prototype, you would not be wrong. The newscast moves on to the story our government agents want to see, a report on Prime. What they hear seems to bring up some concerns. 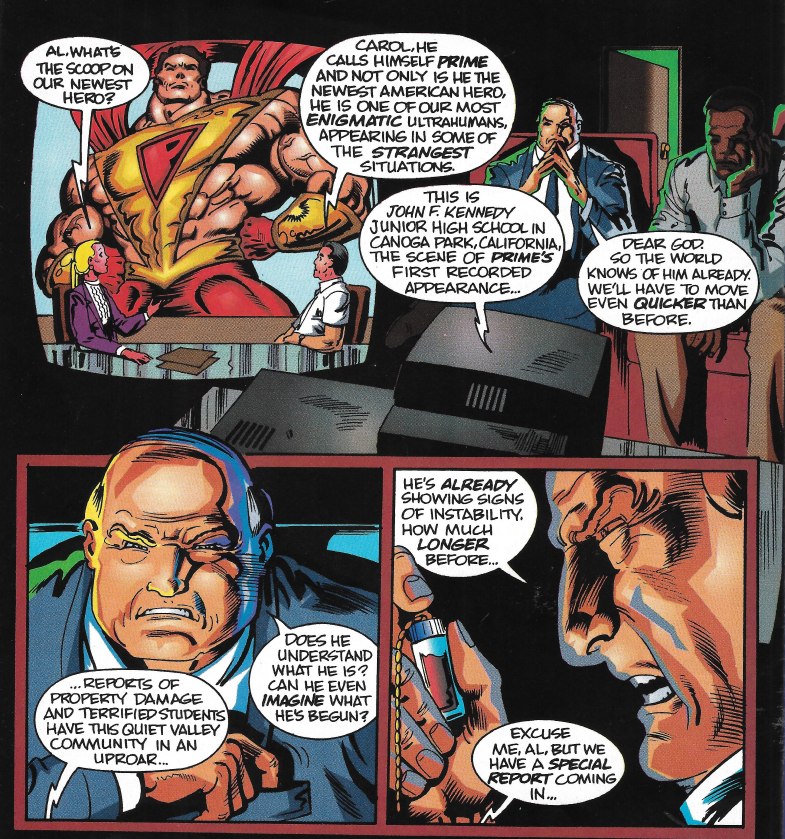 And that special report is from Somilia, where Prime appears to be assisting a special UN troop delivering food while fending off rebels. We jump from the report to just watching as Prime addresses those troops, admonishing them to follow him. 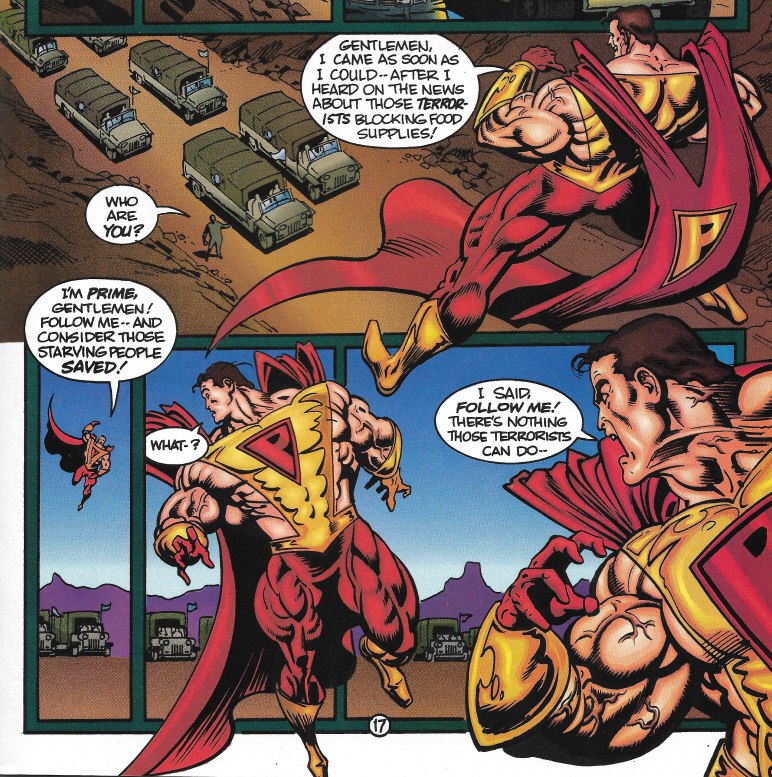 Prime rushes in head first to battle the rebels, tearing through their forces heedless to the danger. His body appears to take a pounding from shells, gunfire, explosives and you name it. None of it appears to cause him any physical pain. He shrugs it off and keeps going. 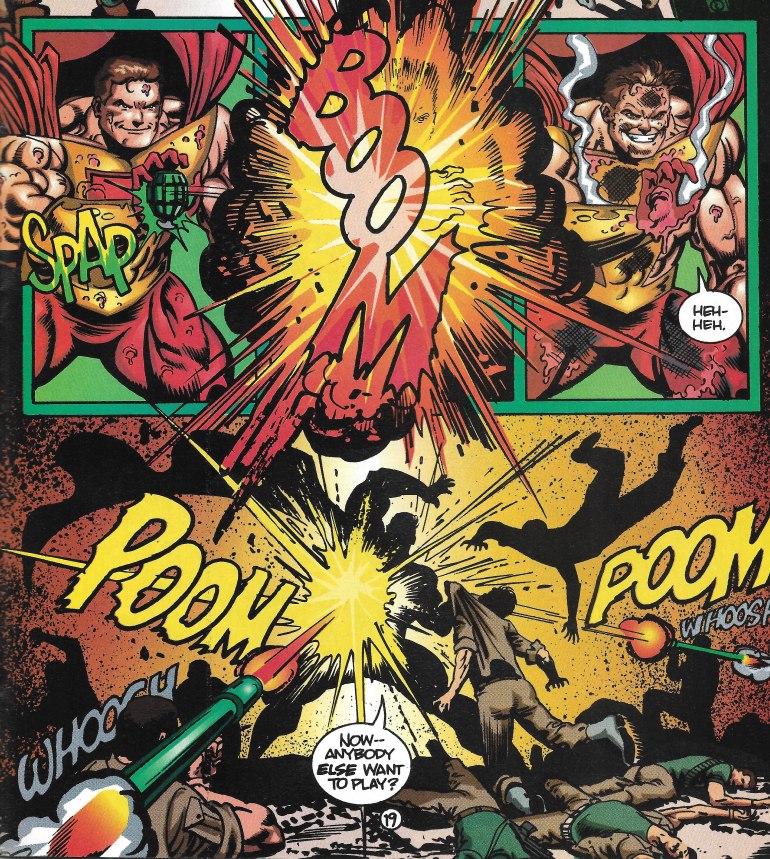 However, after the battle is won there appears to be something dramatically wrong with him. 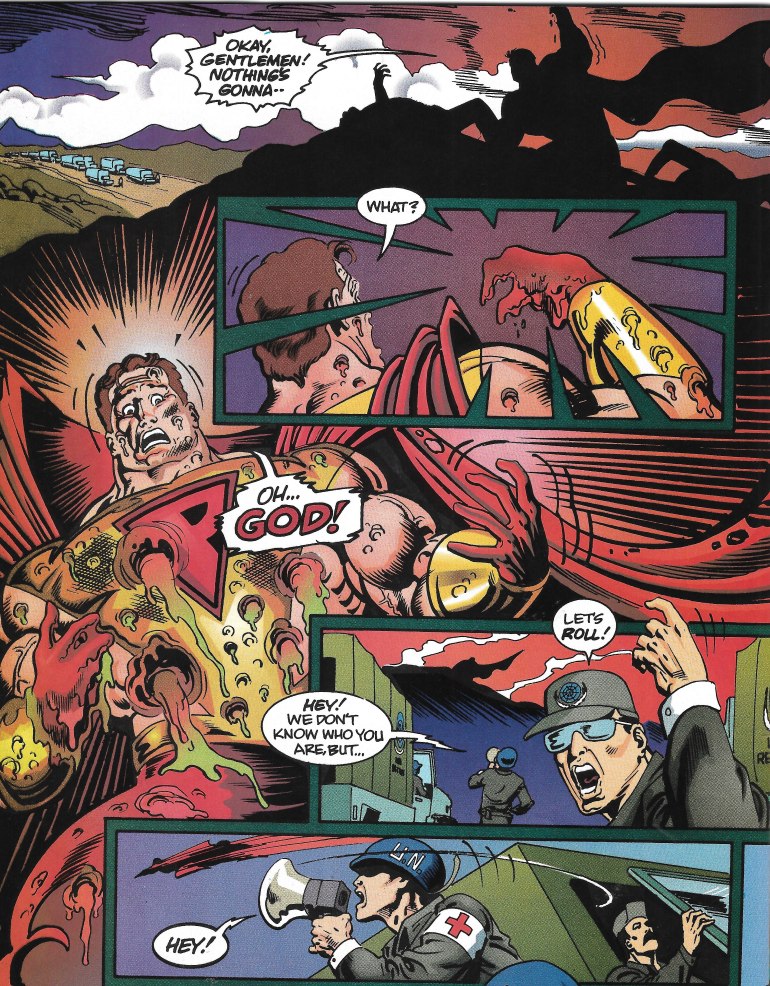 His hand is melting and he is oozing goo from several large holes in his body. He still doesn't appear to be in pain, he just appears worried about this condition. Before the troops can thank him, Prime flies off back to America. He loses control of his flight ability shortly before reaching the building he was aiming for, crashing through a window. Once inside a startling transformation begins. 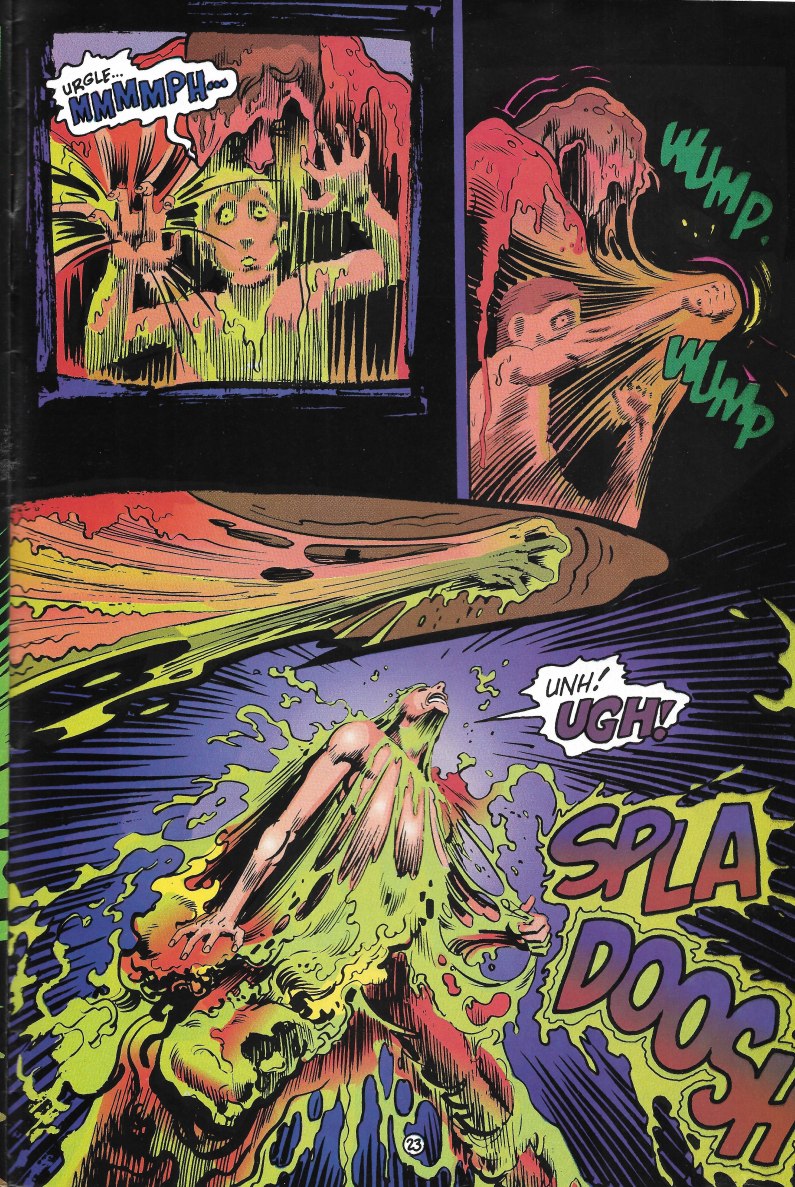 Prime's body melts like candle wax to reveal a figure of a young teenage boy inside. The boy punches his way out of the exterior to crawl away covered in the goo from inside what was the superhero's body. 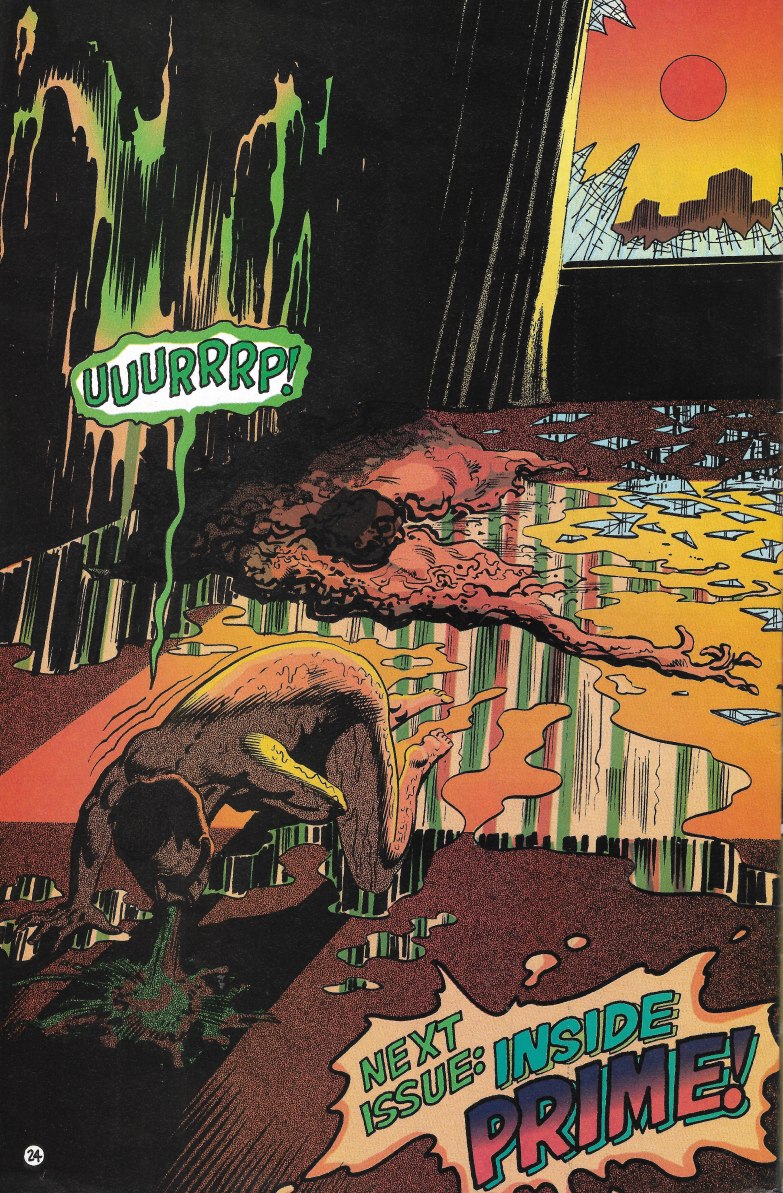 And that is where we end. With a mystery of WHAT exactly Prime is.

The answer of course is that Prime IS that thirteen year old boy and that the government knows all about this process he is undergoing to become the newbie superhero. At the beginning of this I called him a Superman clone, but that isn't really accurate. The template in play here is clearly Captain Marvel (the Fawcett/DC one) only his method of switching back and forth is much messier than saying the word "Shazam!"

It's an enjoyable first issue. A little thin on actual story, but it builds interest in the character well and I found myself intrigued enough to search the Crapbox for issue number 2 (not there yet, but likely will be once I run across it). The art is oddly garish at times, but defies looking like every other 90's book by not aping Todd McFarland. If you're wondering half as much about the mystery presented, you'll want to check out future issues to see what becomes of our teen wonder, his government investigators and the gooey powerhouse he can become when he suits up as Prime.
Posted by SonOfCthulhu at 6:12 AM