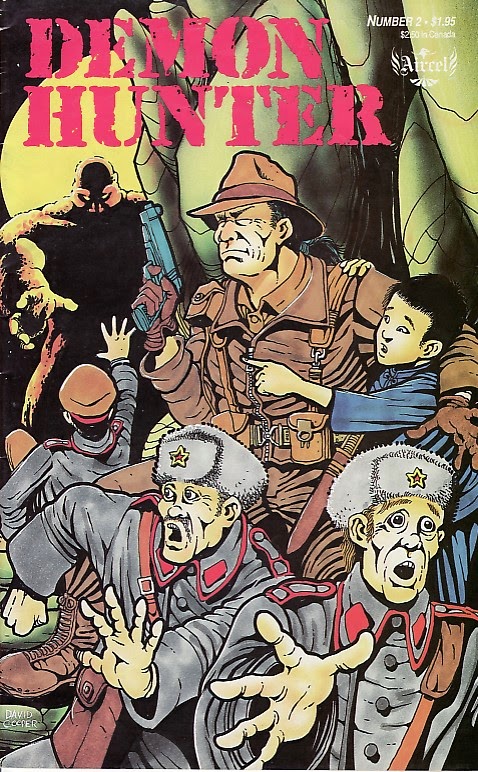 A supernatural horror comic with nary a hint of either.

The brainchild of creator/writer/illustrator Barry Blair, Demon Hunter is a slow-moving B&W comic. Blair would be best known for his creation of the series Elflord. No, I’ve never heard of it either. Elflord came about after Blair sent in some fan art pages to the book Elfquest and was encouraged by Wendy and Richard Pini. Blair then took his ideas to the owner of a failing insulation company and convinced him to create the publishing house Aircel, with the Elflord books as one of its tentpoles. The Elflord books had to have been popular with someone, as they lasted through several spin-off series under different publishers. All told, I counted over 50 individual Elflord issues, which should indicate the title was a moderate success. Again, I never heard of it. But the Elfquest people were always a bit odd in my book and perhaps this book appealed to that demographic.

Just as Demon Hunter should have appealed to mine. There are two things that prevented it. First the storyline moved far too slowly for my taste. It was 25 pages, yet it was all build-up with no payoff. Secondly, the art did nothing for me. Blair isn’t doing a rip of Pini for this series. In fact the figures have a vague resemblance to Richard Corbin drawings. Unfortunately Blair doesn’t have Corbin’s sense of layout or composition. Nor is he able to convey the mastery of gore that Corbin does to make his horror stuff really stand out. Put all these complaints together and I find that while this series isn’t a stinker, it doesn’t have anything to recommend it, either. Demon Hunter got all the way up to issue 4 before it gave up the hunt and went home.

Let’s begin setting up the story: Zak Hunter is an international supernatural troubleshooter. He is sneaking over the Russian border into Mongolia to look into a mysterious “Demon wind” that is plaguing several villages. Why is it when they mention demon wind I picture Satan farting? Anyway, here’s Zak and the soviet sergeant who is taking him over the boarder. The sergeant is a bit like the Russian version of Barney Fife as you’ll see a bit later. 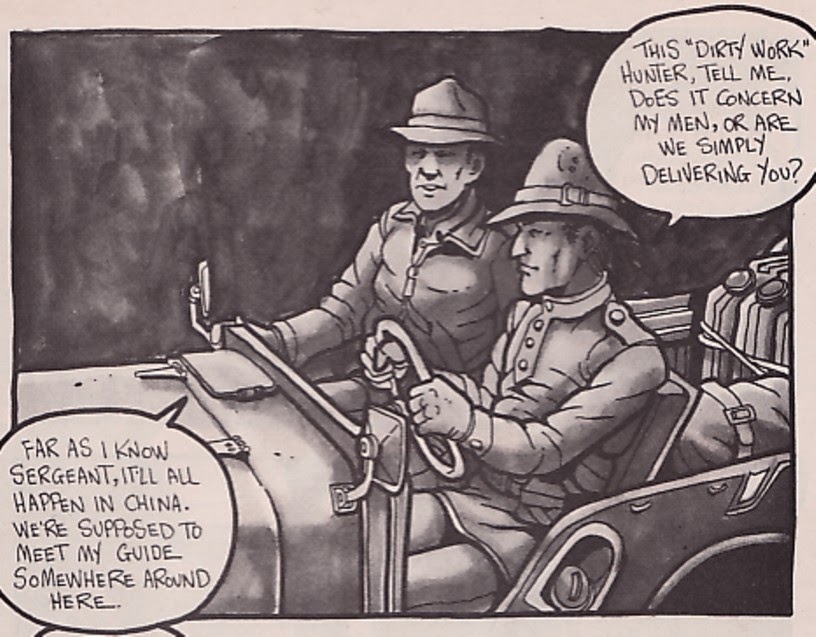 Zak has them stop the two jeeps for a child standing in the middle of the road. The sergeant seems ready to just run the kid over, thinking he might be with rebels in the area. When Hunter talks with the kid, it seems he’s going to be his new guide. Caucasian supernatural adventurer with fedora and Chinese kid…where have I seen that before?

Note that the Devil’s farts are mighty powerful, capable of destroying whole villages. The sergeant repeats that he thinks the boys with local bandits and shouldn’t be trusted. Hunter decides to side with the boy. Right about then “peanut”, as Hunter nicknames him, faints dead away from hunger. 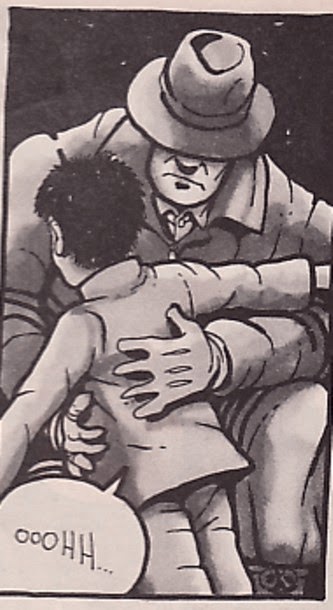 See why I’m not too taken with the art? The boy’s posture in this panel make it look like there are boards up his sleeves. Hunter’s left-hand ring finger is not rendered very well nor is his whole right hand. I’m all for artistic license, but panels like these make some part of me cringe. It’s not horrible art, but there’s just something “unfinished” about it all. Anyway, bandits find the two jeep convoy and start shelling them which prompts the sergeant to decide the boy set them up. His solution? Shoot him. 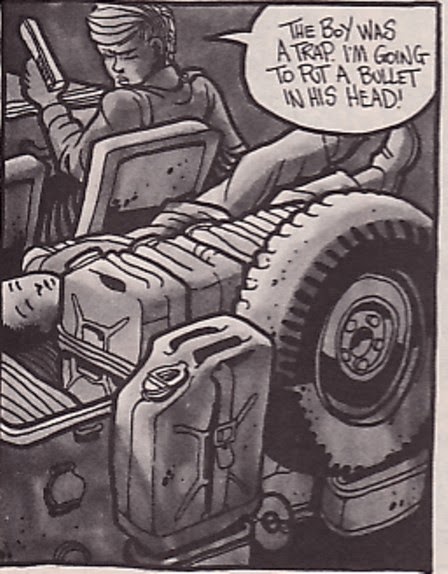 Zak doesn’t let sarge pop a cap in the prone boy’s noggin. We end up with our heroes scrambling behind some oddly drawn boulders for cover, Zak making the scramble while carrying the napping kiddo. The child sleeps like he’s got rigor mortis. I’m not sure that he isn’t a puppet. Also check out the striations on those boulders. It’s a wonder that the characters aren’t dizzy from just looking at them. Those swirl patterns are enough to make anyone see demons. Anyone but the reader of this magazine, that is because here we are more than halfway through the book and no demons. Suddenly the shooting/shelling stops. Hunter and Sarge go for a look see. 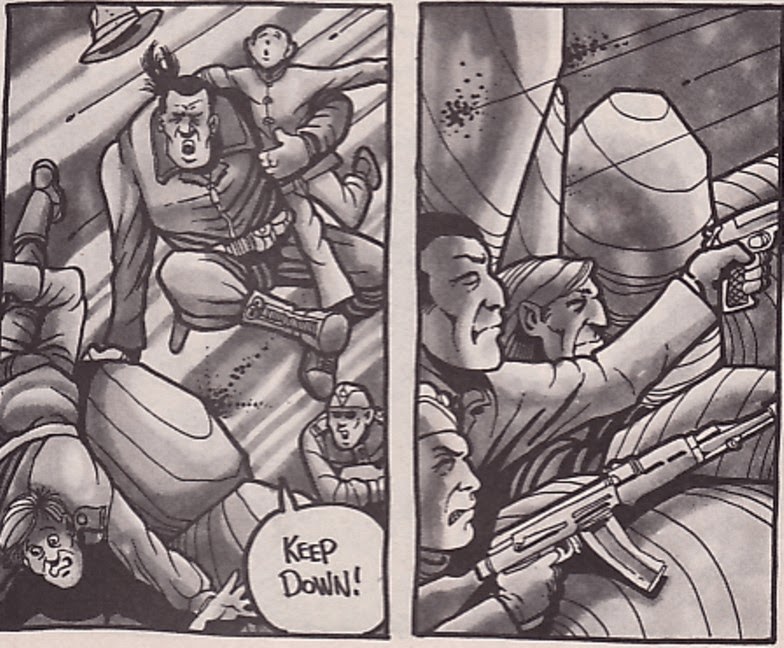 Yay! Demon victims. I was afraid we’d go the whole issue without nary a hint of the supernatural occurrence. Now we have an honest to goodness demon attack. Not that we got to see anything. Also I’m really miffed that this Baird isn’t a better artist. Corbin would have had entrails and blood splattered everywhere. Instead we get a black gash on one guy, some blood dripping out of a guy’s mouth and the impression that one guy’s head was opened up like a Tupperware container. But no real gore. It’s like the demons had maids with them to 409 the blood off the rocks and bag up all the unsightly innards. Lame. 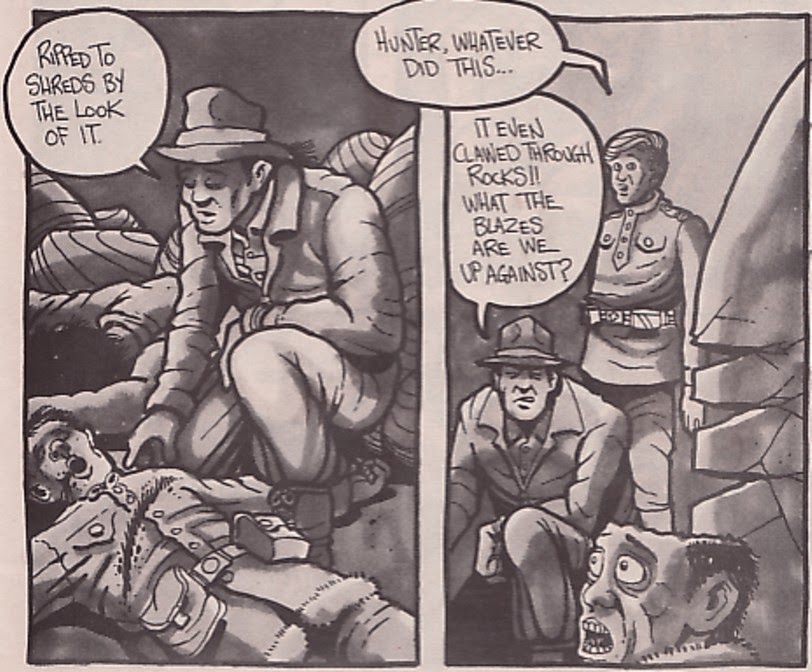 The only survivor of the attack is this lone young girl. Of course the sergeant has the perfect way to handle here: shoot her. This guy wants to blow away unarmed women and children, folks. Ok, so maybe she is armed, but Zak seems to have her well in hand. Sarge has got to be in line for the next humanitarian award somewhere. Needless to say all this is too much for him, so he packs his men in the other Jeep and leaves Zak to carry on to the deserted village with the woman and “Peanut”. 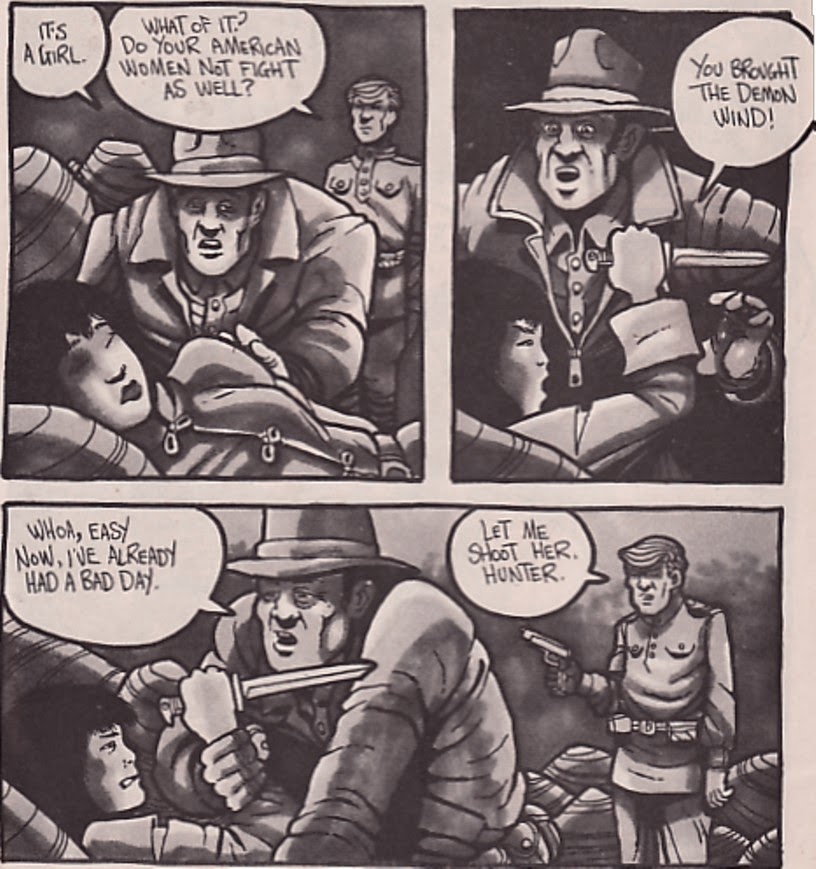 The village is no surprise. Same kind of “toss bloodless mannequin bodies around to indicate demon attack” scene. The characters decide to camp there for the night before continuing on to see the monks that are suppose to be behind the demon attacks. 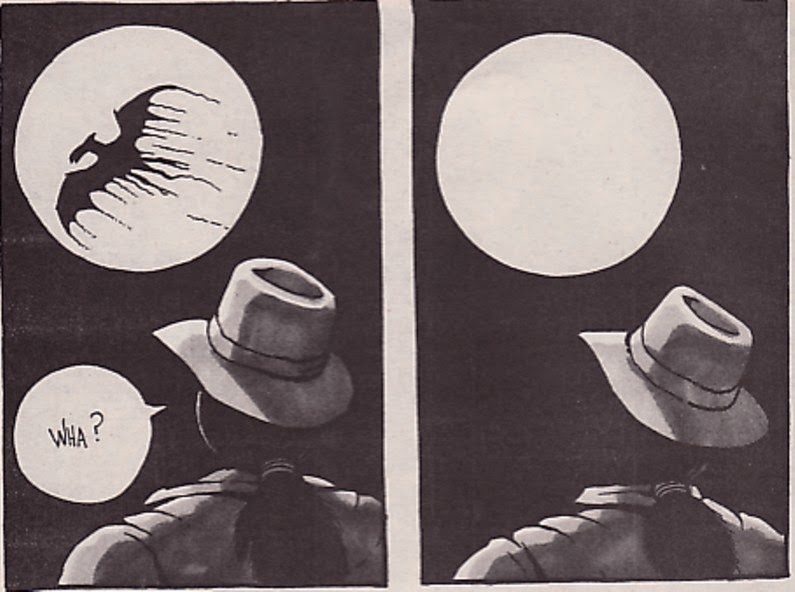 *Gasp* Was that a demon? I think I feel faint from all that excitement. Yes, folks a demon’s shadow shows up on the moon on the very last page of the comic. Or maybe it was the bat-signal? At this pace they might actually see a demon sometime around issue 12. I ain’t waiting that long, are you?
Posted by SonOfCthulhu at 8:37 PM