Horror-ible, Part XVI and Guide to Werewolves Part "I thought we were done": Captain America #404 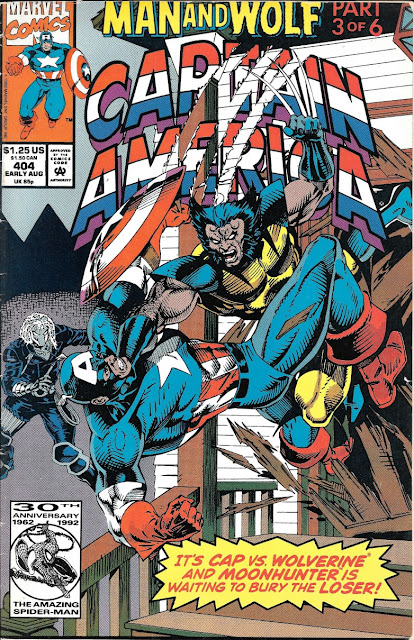 Cap vs werewolves sounded like such a cool idea...

And then I read the actual comic.

Okay, so as you can see from the above, I'm a bit into this six issue arc in Captain America, so you're thinking maybe my mocking of this book is off base. It IS a Mark Gruenwald story, a guy who did a decent job with Cap throughout most of the late 80's-mid 90's. It has Rik Levins on pencils, who steered the book for over three years. The book has werewolves. And a Wolvie vs Cap fight, which are always fun.

And then you open the cover and realize a few things. 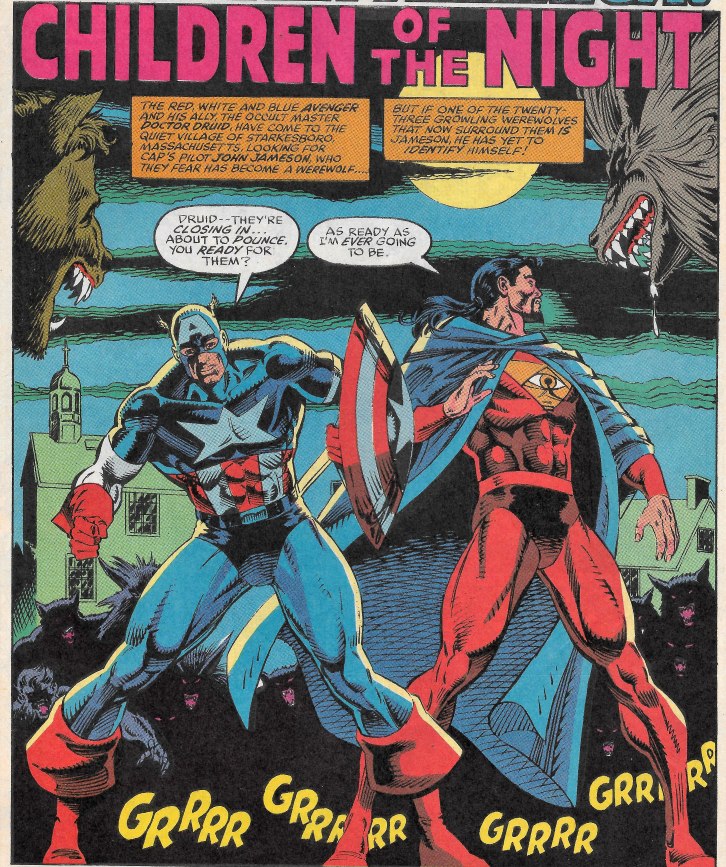 First off, the issue features Dr Druid, a blatant rip-off of Dr Strange, which would be okay if he was from DC or Valiant or wherever, but it's not. Because these two characters occupy the same universe.

I mean it's not like Marvel needs two Spider-Mans or two Hulks or two Deadpools or two Captain Americas or …okay, maybe not such a good argument given the very recent Marvel trends, but this was early 90's. Druid ended up mind controlling the Avengers for a short time before being killed trying to take over the team for good. That being a storyline I take to mean someone at Marvel looked at the character and said "why do we have two Dr Strange-types?", then offed him.

Second is the villains in this bit all seem rather new. Don't get me wrong, new villains are a blast if they are correctly menacing or interesting. These guys probably had backstories explained in the first two issues of this six parter, however I'm not really feeling any interest in hearing what those origins are. Mainly because of their lamestatic naming: Dredmund, Dr. Nightshade and Moonhunter. I'm not even sure Dredmund isn't already the name of a Reggie band.

Lastly, the issues were done during a time the title was being pushed bi-monthly. Six issues normally would mean half a year of character growth and you wouldn't invest in a silly storyline like this one. Here six issues means three months. With those shorter deadlines that means there was less time to edit ideas and art. So we have three inkers on this issue: Bulanadi, Hudson and Kryssing, who all do a decent job. The story, however…this arc is just way out there, is all I'm saying. And not in a good way.

I will admit that I sought these issues out. I knew what they contained. I bought parts three through five and I didn't get all of them on purpose because even I can only spend so much on comics this trashy.

But I got them for you because YOU deserve them.

You'll find out what a dubious honor that is as we go along.

We begin part three of this tale with Cap and Dr. Douche, er…Druid surrounded by "twenty-three growling werewolves." That's the narrator's count, by the way. It was important that it be less than two dozen, I suppose. The duo was looking around Starkesboro, Massachusetts for Cap's pilot-friend John Jameson, known to most of us as Man-Wolf and the son of J. Jonah Jameson.

John disappeared near here and this sudden appearance of LESS than a two dozen werewolves would lead one to believe he's around somewhere. Except John's werewolf-ism never seemed to make others into werewolves in those Spider-Man comics, so what really gives here?

The answers are coming, but trust me when I say you won't like them.

The key thing is, our heroes have to escape from this mongrel horde if they are going to find John, who they seem to know isn't one of these hairy fellows.

So Cap attacks them… 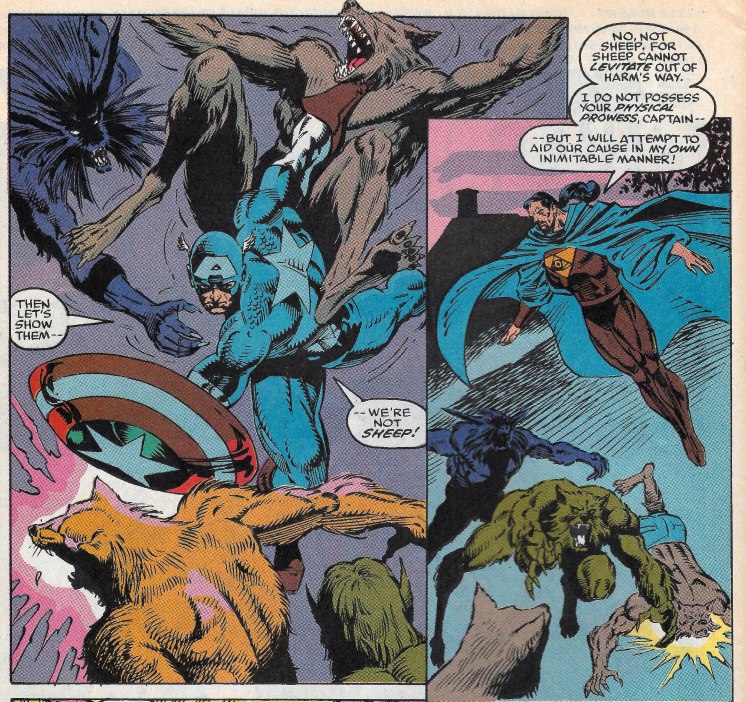 While Dr Druid floats away and does absolutely nothing to help him.

Alright so maybe he does a little to help Cap. First he acts like a dog toy held out of dog's reach. Then he hypnotizes a few of them… 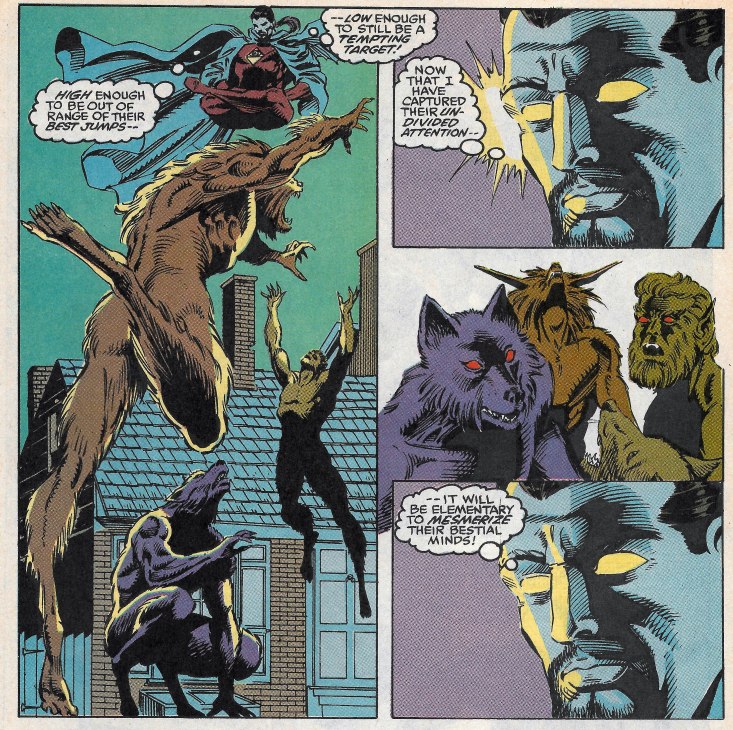 And then he makes them fight the other werewolves. Cap meanwhile is preoccupied with what I would worried about: lycanthropy. 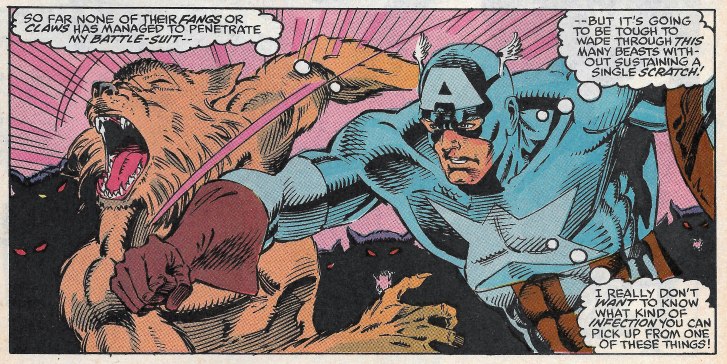 In an odd rumination, later we find that Cap is immune to this type of lycanthropy infection. I wonder what other viruses Cap's super-strength serum could fight off?

That's a thought for another time. First we have to finish off these werewolves. 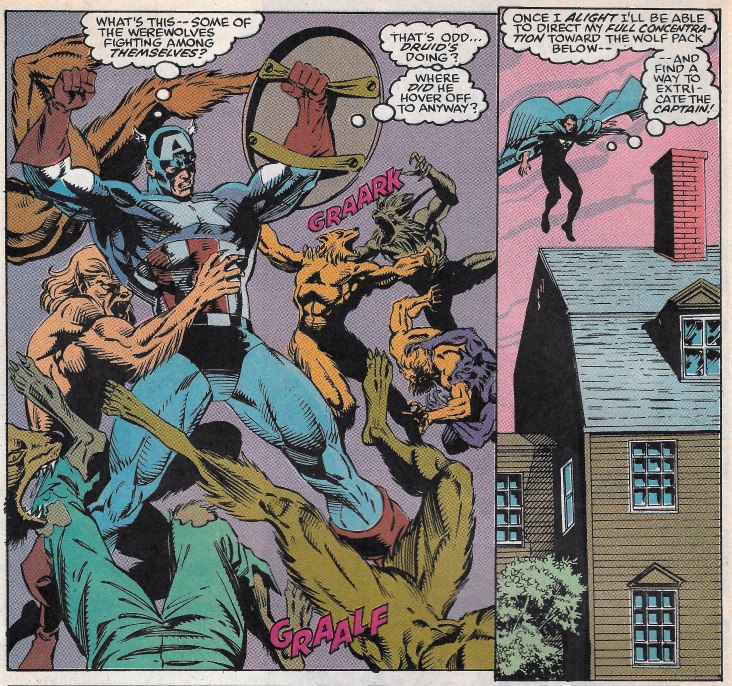 So Druid's wolf-hypnotism powers seem to be working and Cap is doing his share of werewolf tossing. Then Druid floats over to the roof and plucks the good Captain out the fray like he's a stuffed animal in a claw machine. Then he makes him vanish. 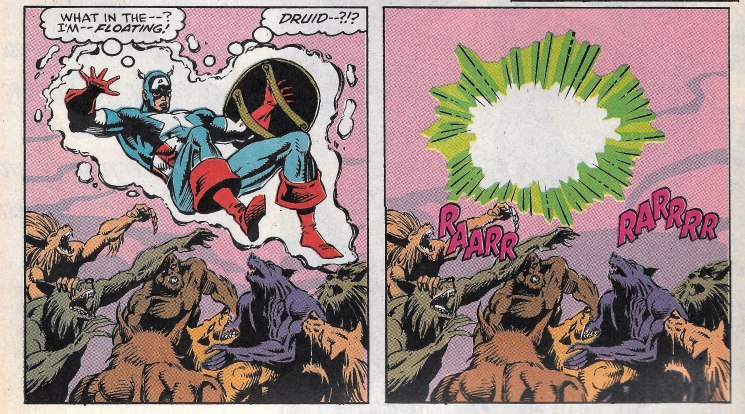 While we wait for Cap and Druid to figure out how to dial the city dog pound, we switch over to two of our bad guys who've captured THE most marketable character of the 1980's: Wolverine. The hidden figure in back is Dredmund, who is the leader of the nefarious trio. His assistant here is Dr. Nightshade, a young lady with a penchant for turning folks into werebeasts. 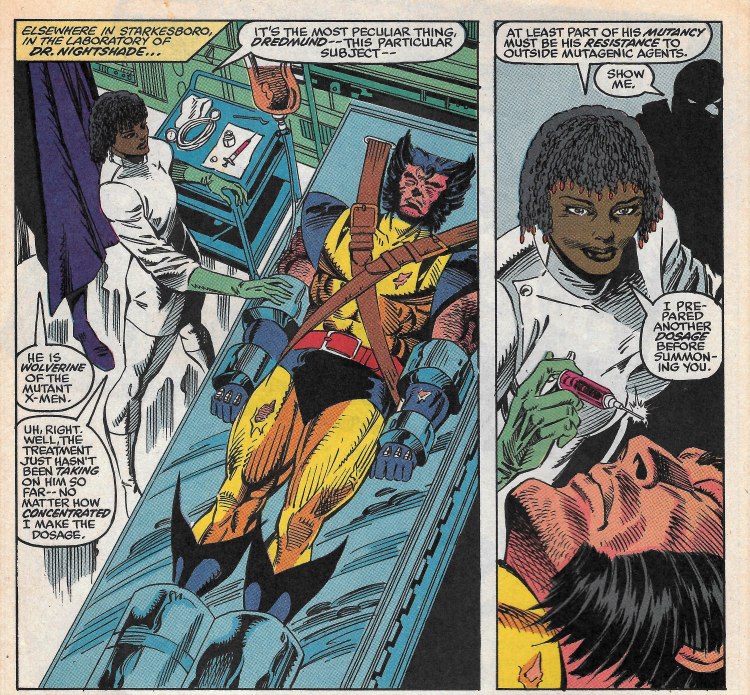 Here she has a go at turning Wolvie into a werewolf for what must seem like the umpteenth time. 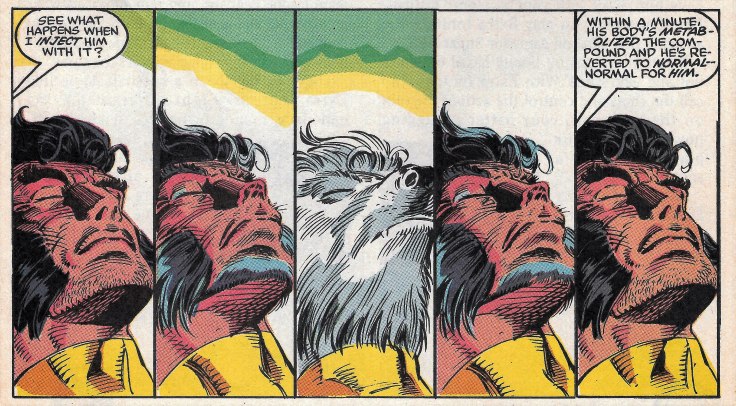 Might have something to do with his pesky mutant healing factor. Am I the only one that finds it funny that Wolverine would turn into a silver haired wolf instead of a brown one? He looks like a sweet pooch in that middle picture.

Anyway, Dredmund decides to mind-control Logan instead, turning him into a feral, bestial state. 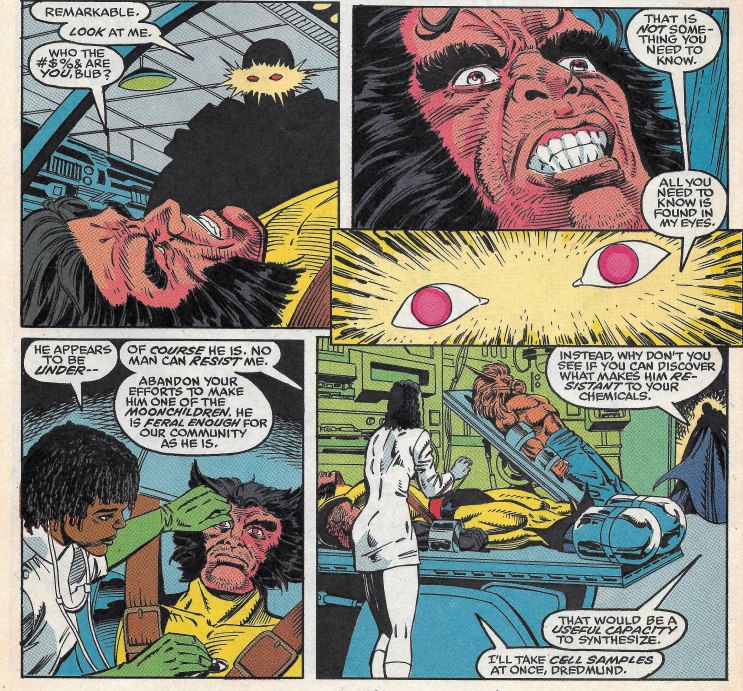 While Dredmund and Dr. Nightshade converse, Cap and Druid watch as Moonhunter searches fruitlessly for them. Druid has made the pair invisible to all of Dredmund's minions, leading to lots of frustration. Moonhunter seems particularly annoyed and thus treats his werewolf companion very poorly, leaving the creature to turn into a naked human in the middle of town at night. 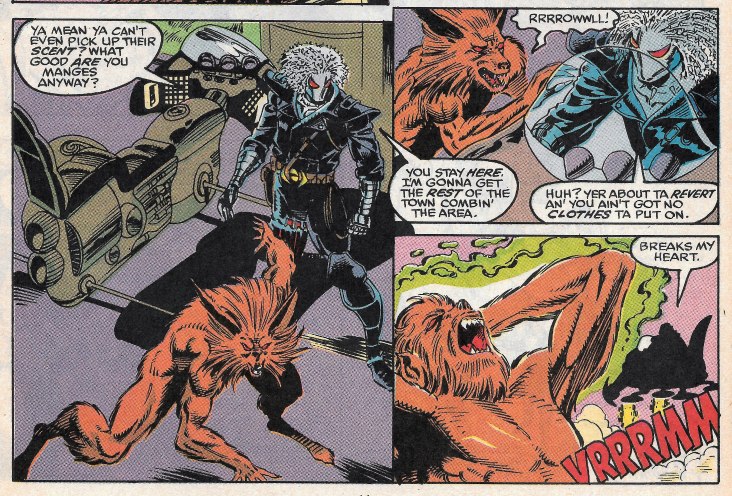 I wonder if I could use that excuse next time I'm caught nude in public. "I was a naked werewolf and I just changed back, officer." Guess I'll have to try it to find out.

So dicky Moonhunter returns to the house Dredmund is using for his evil werewolf headquarters and after landing and walking inside, he goes to the door outside Dredmund's alchemy lab and this happens… 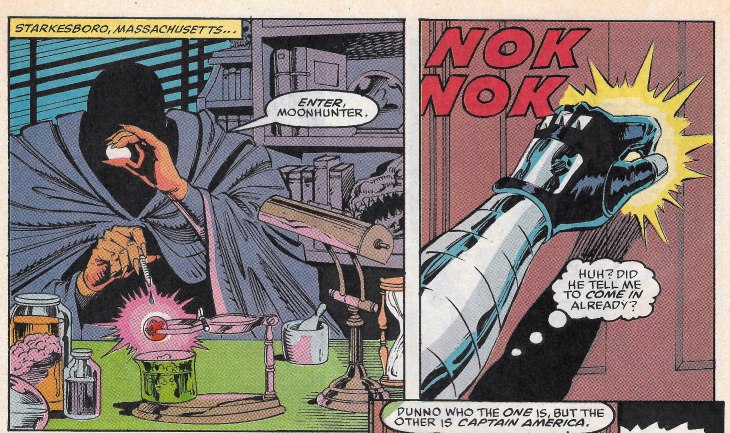 Moonhunter is perplexed, but perhaps he shouldn't be. He drove a noisy-ass flying bike around the house, probably slammed the door coming in and quite possibly asked everyone there in a very loud voice where Dredmund was at. It's not like the guy's psychic or something.

And when he reports his failure (which Dredmund would know already if he was psychic, duh!), the big D-man chews him the heck out.

Wait, is Moonhunter's hair made out of barbwire? That has GOT to be hard to comb. Either way I love the very stupid "Aw, come on, boss…" line he spits out like a wounded twelve year-old. On his way out, he's heard muttering "Shucks."

Cap and Druid find their way to the same place undetected due to Druid mind messing with everyone they come in contact with. However they burst in to this awaiting surprise. 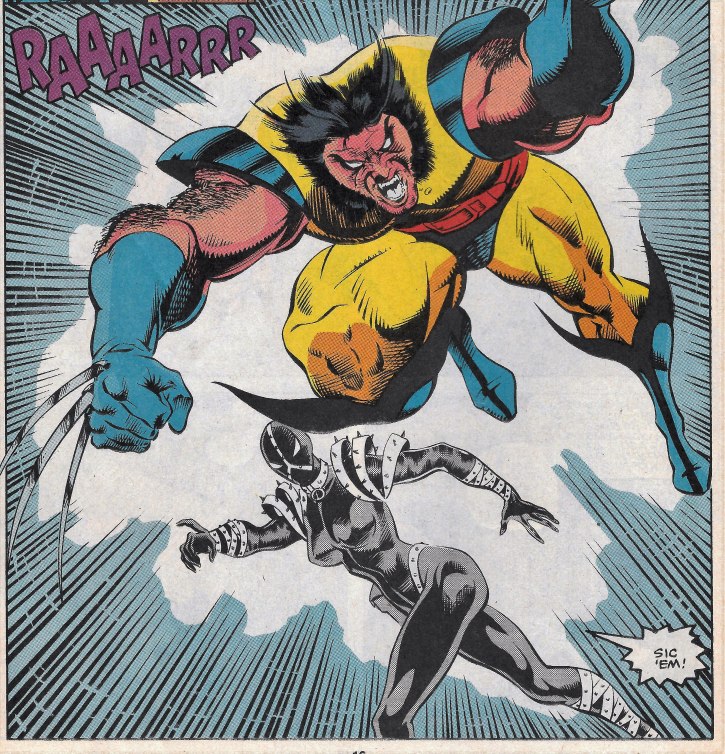 That's Dr. Nightshade behind our mutant friend, out of scrubs and into a studded latex bondage getup. No clue how those dreds fit under that gimp mask, though.

And at this point we get to the fun part of the book, where the two heroes fight. Cap always has Wolvie's number though, especially when he's in his feral state. It is a bunch of fun to watch them both tumble around and to wonder how any of this would look in a movie that we will never get because of how the licensing of these two franchises are held right at the moment. 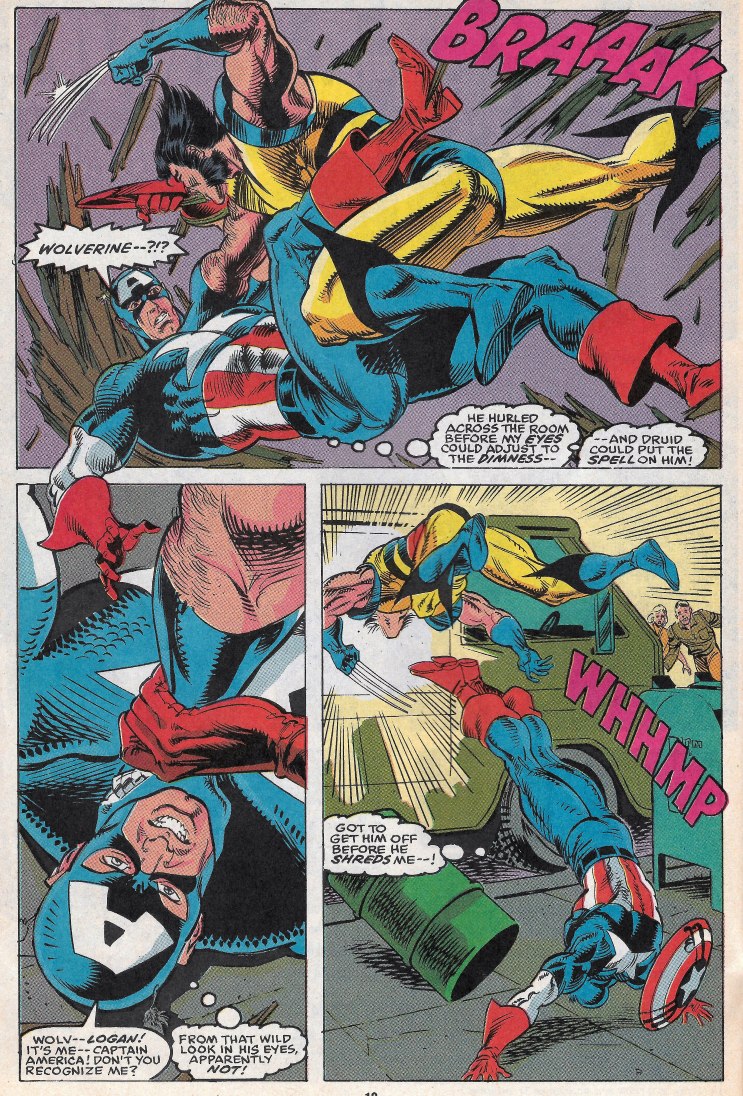 Cap keeps tossing Logan around hoping it will knock the sense back into him while looking for Druid whose mind-bending power would come in handy right about now, but to no avail. We get a couple more pages of this stuff… 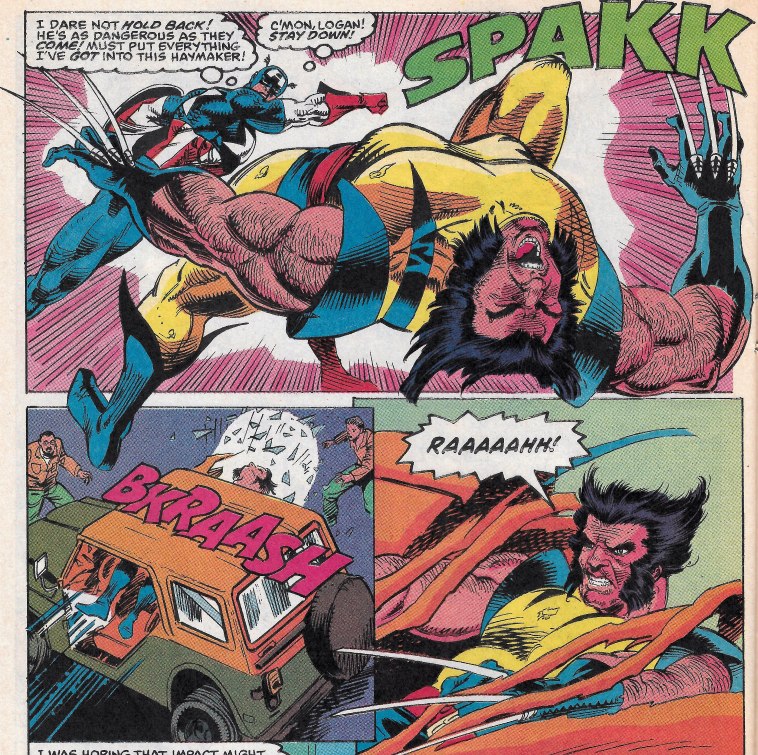 …and then Logan head-butts Cap with his admantium noggin. Which ALMOST knocks Cap out, but when it doesn't Dr. Nightshade is on hand with a tranquilizer dart to finish him off. 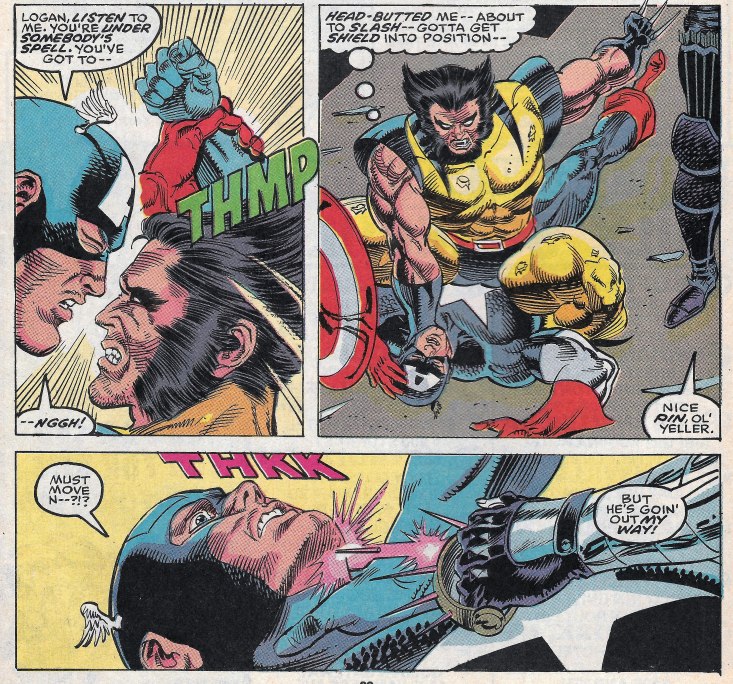 All of which is leading up to this: 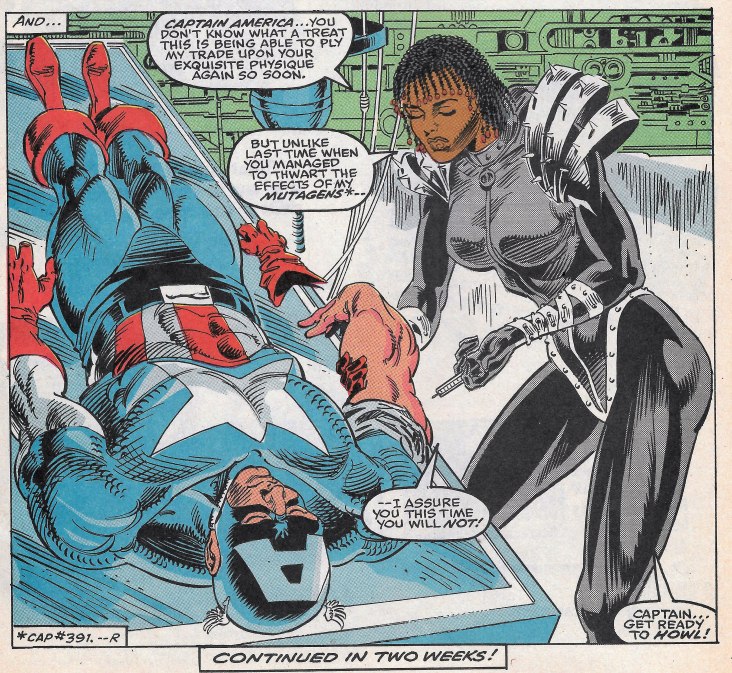 Yup. Next issue folks you are going to witness something "ruff" and it will make you wonder how the writers could have been barking up the wrong tree with this storyline. Prepare yourselves for the coming of CAPWOLF!

Posted by SonOfCthulhu at 2:48 AM

Email ThisBlogThis!Share to TwitterShare to FacebookShare to Pinterest
Labels: Guide to Werewolves, Horror-ible