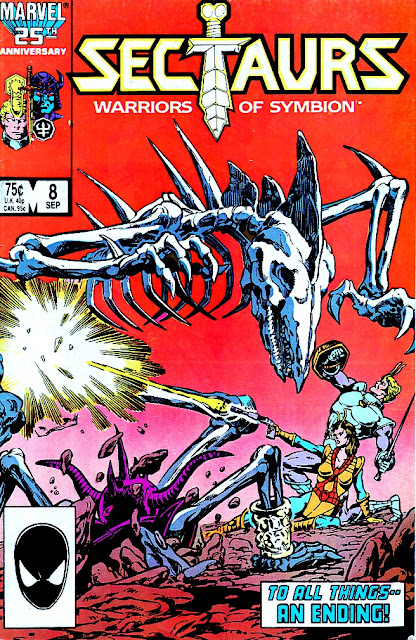 Sectaurs premiered in 1984 but had possibly the shortest life of any toy tie-in. Manufactured by Coleco, these action figures had a small slew of coloring books, a comic book that lasted eight issues and a five episode cartoon series. Not the ton of marketing push we saw with the other toys that came out around the same time. I think only Shogun Warriors received less promotion dollars than these guys.

Who were these “Warriors of Symbion”? The world of Symbion was once like Earth until genetic scientists make an oopsie during a very important experiment. The effects of the experiment spread throughout the whole planet making insects and arachnids grow to huge size while changing the human population into a species that has attributes of insects and/or arachnids. Also folks become bonded to the insects, allowing them to control their actions through empathy. So it’s sorta like the planet where everyone gets to be Spider-Man, only in a much more literal fashion.

Eventually the populace joins one of two rival factions: the peaceful Shining Realm of Prosperon currently led by Prince Dargon or the Dark Domain of Synax whose leader is the evil Empress Devora. The factions war across the surface of Symbion, seeking to possess the Hyves which are ancient fortresses of terrifying knowledge and power. Sectaurs has a very accessible setup. What would have kept me from adding them to a Christmas wish list was the fact that all the little buggers looked a little…buggy. 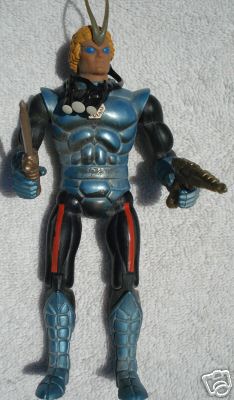 Yes, as a child I was afraid of spiders. And as fascinated as I was with insects, I really didn’t want to identify myself with them through my action figures. That guy above would have grossed me out worse than Goldblum’s Brundlefly. Not only that, he’s one of the good guys. The bad guys looked much scarier. Not to mention the deluxe Sectaurs figures that came with puppet like spider parts and battery powered wings. 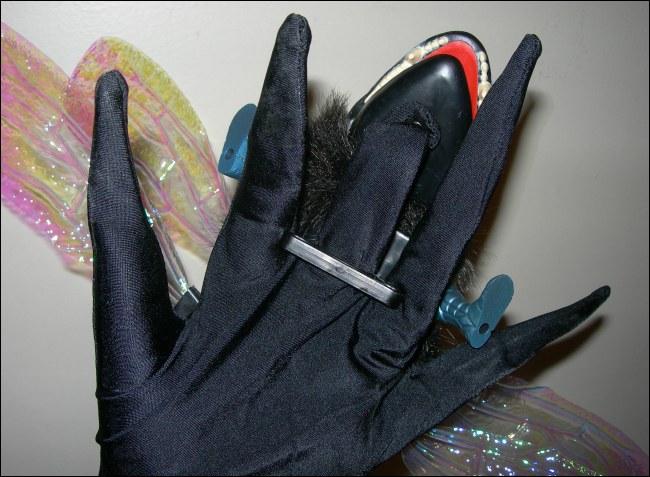 I would have ran if someone came at me with one of those. What was impressive was Sectaur’s Hyve playset. It was gigantic in size and sported two puppet monsters, a crane, and multiple levels inside and out. 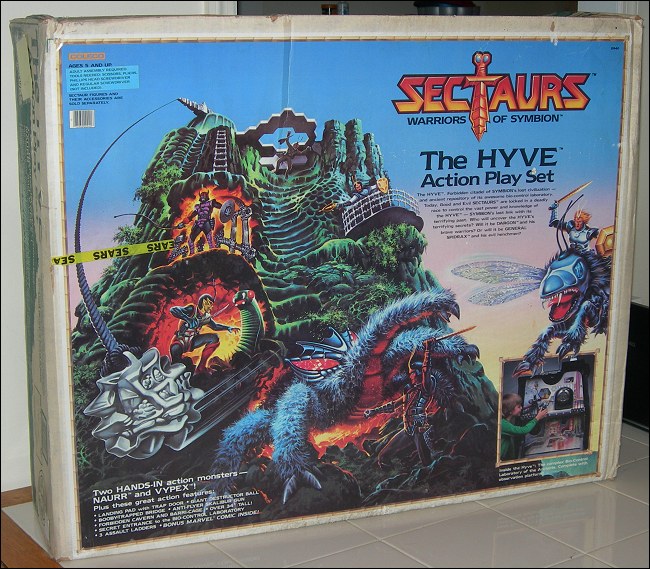 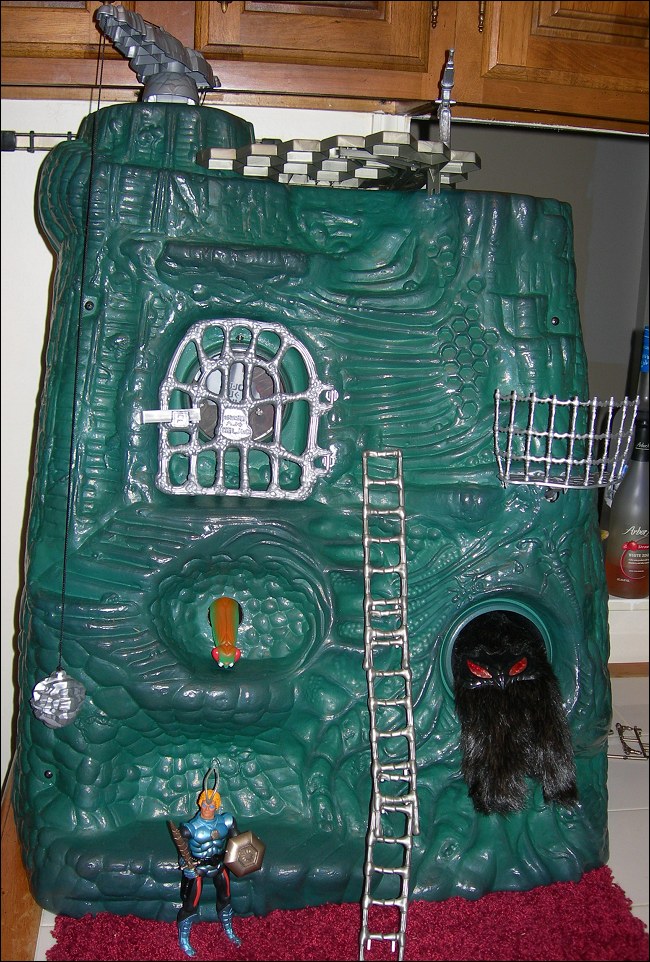 I’m not the only one who dug it. THIS GUY gives what can only be called a definitive review of the place. As for the lowdown on the Sectaurs themselves check out the site HERE.

We open issue 8 of Sectaurs with a lot of backstory to catch up on. 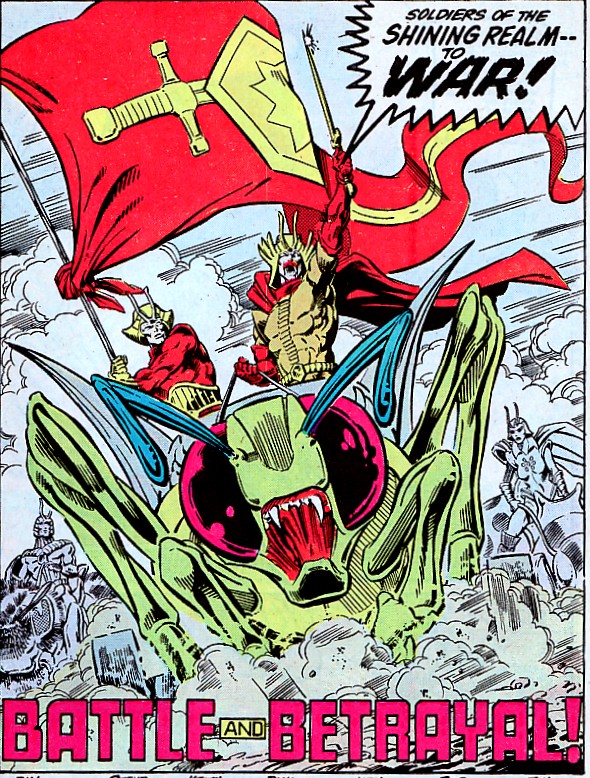 Just like in the toy ads, the evil Synax dominion and the good Prosperon realm are trying to secure the power of the Hyves, ancient repositories of terrible power.

Prosperon’s leader Regent Galken has sent his nephew, Prince Dargon, off on a secret mission to secure one of the Hyves and capture its power for the Shining Realm. Under the guise that he has been branded a traitor and outlaw, Dargon has taken with him four companions: his best friend Zak, his wise mentor Mantor, the secretly-in-love-with-Dargon warrior woman Stellara, and Pinsor, who stands around a lot and has about two lines. Here we have the army of Regent Galken arriving in front of the Hyve and taking the field opposite Empress Devora sizable force.

Galken expects that his nephew is in complete control of the Hyve’s power and doesn’t anticipate any problems in battle. He is in for a nasty shock. The fact that Bill Mantlo is helming this book means you can expect some decent storytelling to take place, including some unexpected twists and turns. The next page gives us a nice 2/3 page spread of the battlefield, a look at our opponents and the sought after Hyve playset…er, fortress.

The guy speaking is Skulk, one of the grosser looking Sectaurs. His action figure would have probably gone in the closet when I went to bed each night. Maybe even in a locked chest in the closet. Yuck! What transpires next is a conversation between the evil Empress Devora and her top commander General Spidrax. They mention that it is convenient how Galken is here to oppose them, seeing as how he’s supposedly a coward and all. They give full credit to Prince Dargon, who seems to have taken control of the Hyve they are about to battle for. This exchange leads to one of the strangest metaphor I’ve ever encountered.

I’m sure I never want to visit Symbion if they have roaring cockroaches. Meanwhile Galken is chatting with one of his female warriors, a young lady (lady...bug?) by the name of Belana. They both are confident that they will be victorious but Belana is conflicted about the victory. Seems she’s smitten for Prince Dargon, but is betrothed to his best friend Zak.

Prince Dargon and his troop have their own problems. Seems that the Hyve’s power isn’t as benign as was thought. It’s almost sentient and wants to destroy all life on Symbion. Or at least it wanted to. In the last episode, Zak was possessed by the Hyve’s power source and Dargon destroyed it before Zak could kill them all. So now they are atop a Hyve that has all the real power of that plastic playset. 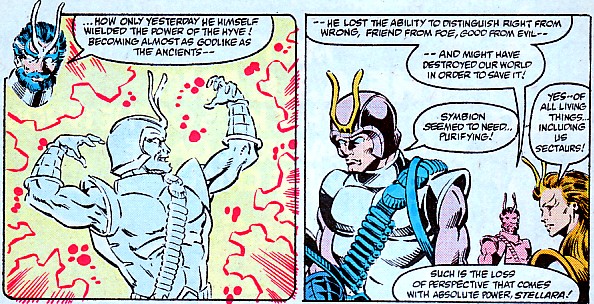 I’m actually starting to root for the Hyves after seeing Devora’s soliders. Would just a bit of purifying be so bad? By the way, that’s Mantor recounting Zak’s tale. He’s like the wise man of the group and he’s got a ace up his sleeve. Mantor has siphoned off a small bit of the Hyve’s power into his staff before it was completely lost. He’s keeping that info to himself it seems. Pinsor gets one of his two lines, which is “What do we do now, my Prince?” To which, Dargon doesn’t have a real idea.

Meanwhile, Galken and Devora meet before their assembled armies, Galken to sue for peace and Devora just to taunt him. Galken isn’t about to stand for that and he calls down the lightening. Or attempts to at least.

Even though nothing happens, this freaks out Devora’s generals a bit, so much so that she feels inclined to show them how it’s done. 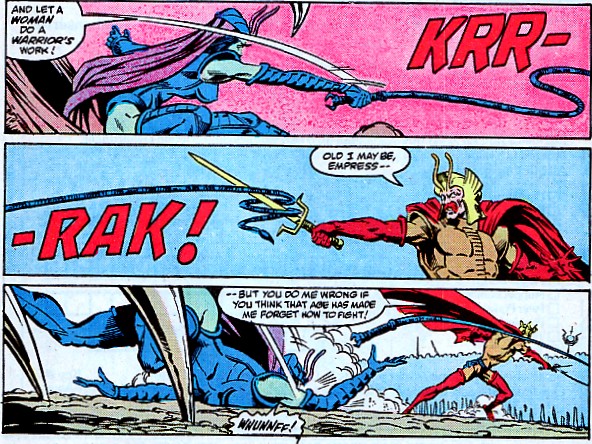 Maybe that should read “attempts to show them how it’s done.” Not looking so good there Empress. I noticed that we never see Devora’s face throughout the whole book. She’s always shown in shadow. At first I thought it was to heighten her sense of power and mystique with the audience. Now I realize that it must be to hide all the facial scars she’s gained over the years by trying to be a “warrior-bitch” and failing miserably. Galken lets her leave and the two armies prepare to meet in bloody combat. 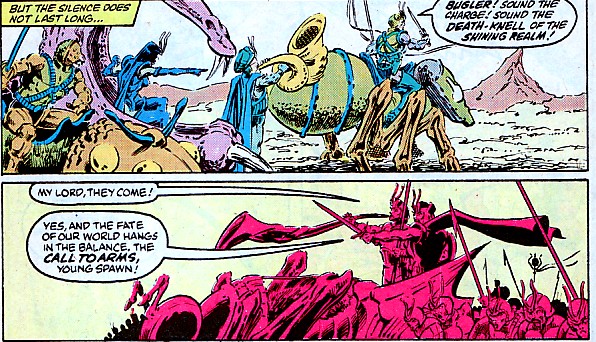 Young spawn is meant to replace “young men” here. Don’t get excited thinking Sectaurs somehow was crossing over with McFarlane’s character years before he became popular. Not that a crossover with a big name wouldn’t hurt the title any, sales wise. As it stands we get lots of shots of bug guy vs bug guy, some of which Ken Feduniewicz takes the time to color and some of which everyone is the same shade of Blue or Red.

Belana gets tired of waiting around or just gets tired of being painted the same color top-to-bottom every other panel and she uses her insectoid to fly to the top of the Hyve to see what’s up with her boy Dargon. Dargon has to confess he’s powerless to stop what’s going on below. He then tries to sound hopeful in the face of defeat.

Notice how Pinsor (second from right) is kind of looking off panel, as if he’s a movie actor trying to spot the director to ask what his motivation for this scene should be. Dargon takes Belana’s words to heart and is about to join the battle on his flying bug thing, when Mantor talks him out of it. Instead Mantor insists they flee…er, fly off to find the other Hyves and destroy them before Devora can find an active one. Something that might mean the end of all life on Symbion.
Dargon agrees. But only after he sees the symbol of his Father carved into the Hyve is he truly convinced. Seems that Dargon’s Father left the Hyve functional because he knew Dargon would understand the threat the ancient battle fortresses posed if he experienced their power himself. So off they all fly to find the next Hyve and destroy it. Devora watches what’s happening and totally misses the boat. 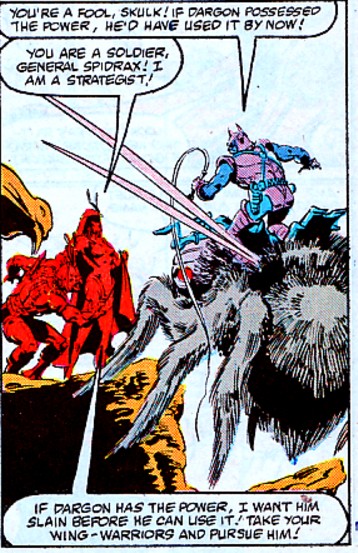 She and General Spidrax argue about how splitting their forces to go after Dargon’s group will spell disaster to their army on the field. Devora is stern and demands Dargon be captured. So General Spidrax and more air support than you could do in with four hundred cans of Raid Flying Pest Killer take off in pursuit.

Meanwhile, Dargon’s going all emo on us. 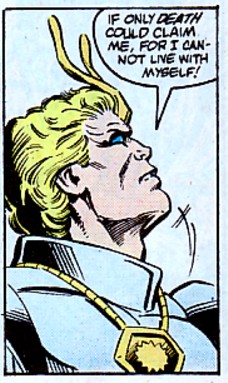 Mantor gets him to cut that crap out as soon as he notices the swarm of bad guys zooming after them. In an act of desperation, Mantor uses the fortress power in the staff he’s carrying to try and halt their advance.

The appearance of which gives everyone a chance to make a comment: 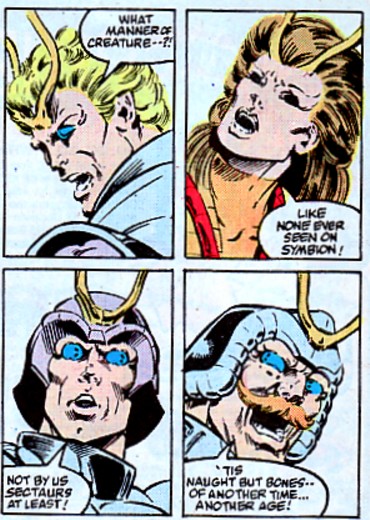 Pinsor: “I got a line! I got a line!” Poor bug-dude. If it were up to me, I’d give you your own limited series. Four issues and you can chat about whatever you want to. Instead, that’s it for you. Last line ever.
General Spidrax has an impossible time with these bone creatures and his troop’s numbers are reduced so quickly, it’s like the things had giant fly swatters. They beat a hasty retreat back to the main battle force only to find that things didn’t go so well there either. 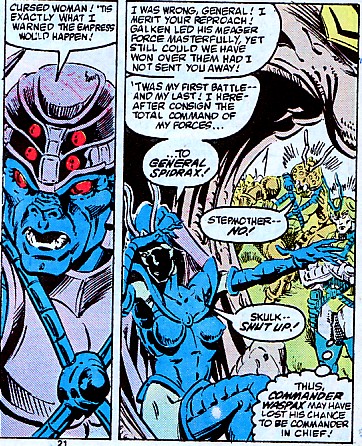 “Whoops! I messed up and lost the battle by way of sheer incompetence. Sorry about all the lives lost. Guess I’ll just step down now and appoint a new leader.” If I were her I’d hide my face too.

And while Dargon’s group decides to continue to seek the Hyves, General Spidrax vows that their power must be his. It’s an amazing thing that the book ends, yet nothing is really resolved. Sort of like most sitcoms. 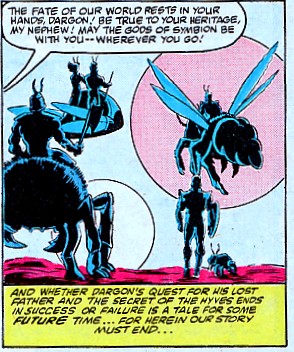 Sectaurs was released as a ongoing, but number 8 wraps up the first story arc with the knowledge that the series ain’t coming back. It’s nice of Marvel to actually allow the story to complete before dropping the axe. And even I have to admit that for a tale about creepy insect dudes, the story doesn’t bug me one bit.
Posted by SonOfCthulhu at 2:51 AM