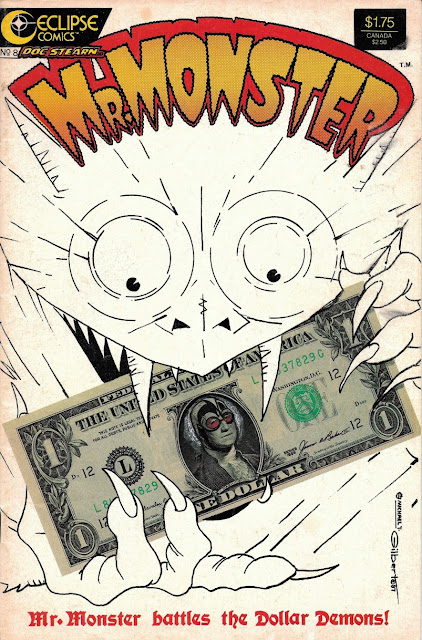 Horror, comedy and superheroing don't mix, or do they?


If you are as old as me, you probably passed by Mr. Monster comics several times at your local comic book shop and never once picked up an issue. If you had you would have found the genre bending stories of Michael T. Gilbert and a rotating handful of artists making something that feels like at 1940's pulp newspaper tale between those covers.

You'd be part right in that assumption, since the concept for the character was derived from a very little known and little used (appearing 2 times) 1940's superhero who had lapsed into the public domain. Gilbert saw an opportunity there and took what he needed to craft the Doc Stearn / Mr. Monster character, infusing it with a horror/humor hybrid. The concept has bounced from company to company over the years, teaming up with various standard-bearing characters and spinning out tales providing both chills and chuckles.

The books are anthologies containing two or more tales with Michael T. Gilbert on scripting and occasionally layouts. A rotating stable of artist handle pencils but of the two issues I found both had decidedly pulpy, Spirit-like designs. I found the story concepts to be unique in a way that would provide an occasional chuckle or creep-out. I'm sure you'll want to take a gander so let's jump in on the first of two tales issue 8 tackles. 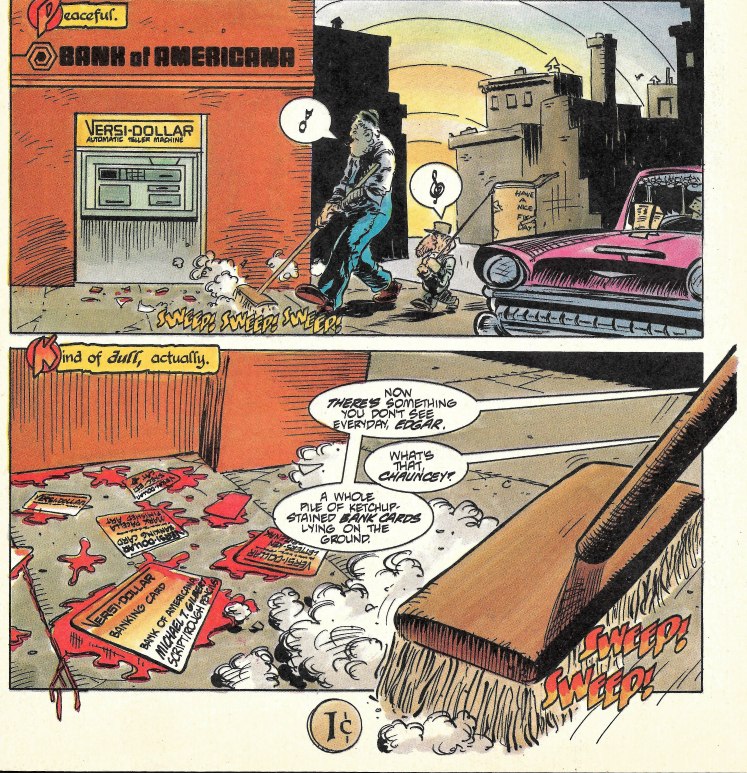 The morning in Doctor Stearn's hometown of Potterville finds these two street sweepers, Edgar and Chauncey, arriving at a gruesome discovery. A pile of bloody ATM cards beneath the Potterville Bank of Americana's instant teller machine. This is enough to get Mr. Monster, Doc Stearn's alter-ego to investigate. Here he is staking out the machine to see what's afoot. 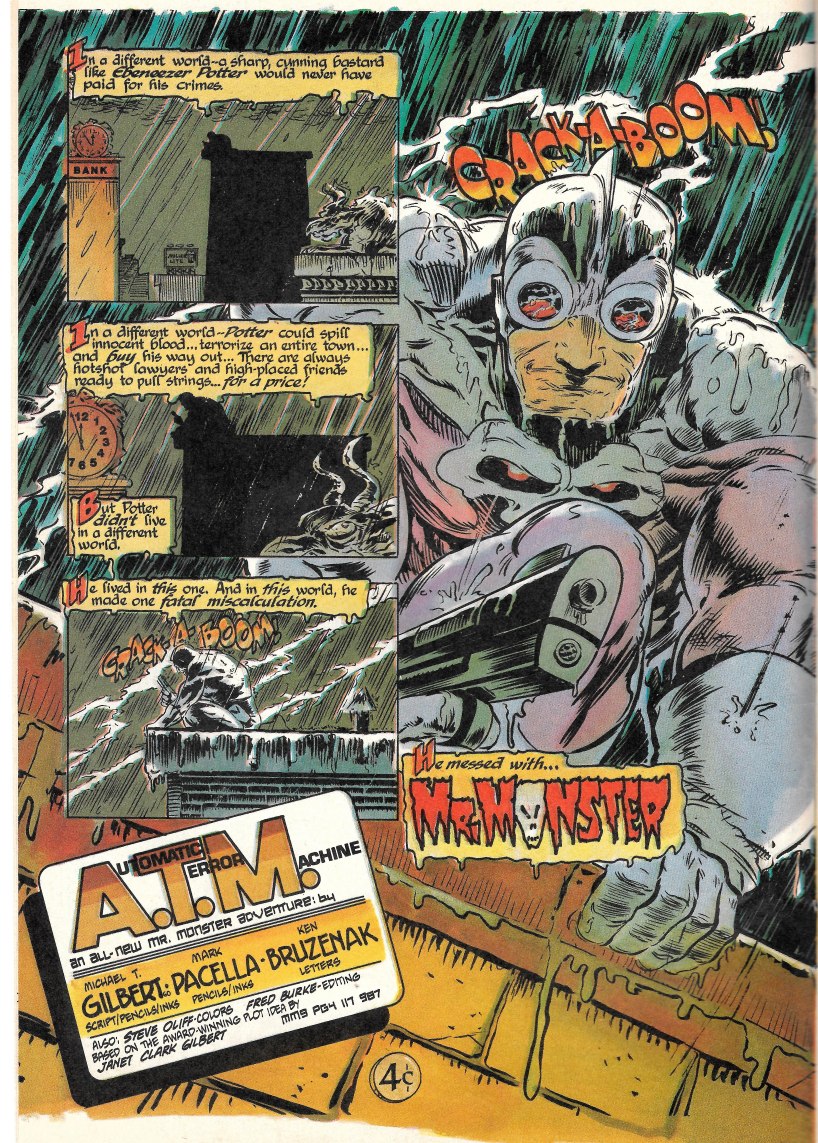 An overnight withdrawal becomes a bloody deposit of an unexpectedly horrid kind. Notice how much effort goes into making the female victim appear unsympathetic? These are standard storytelling tropes to help us enjoy the mayhem without our conscience getting in the way. 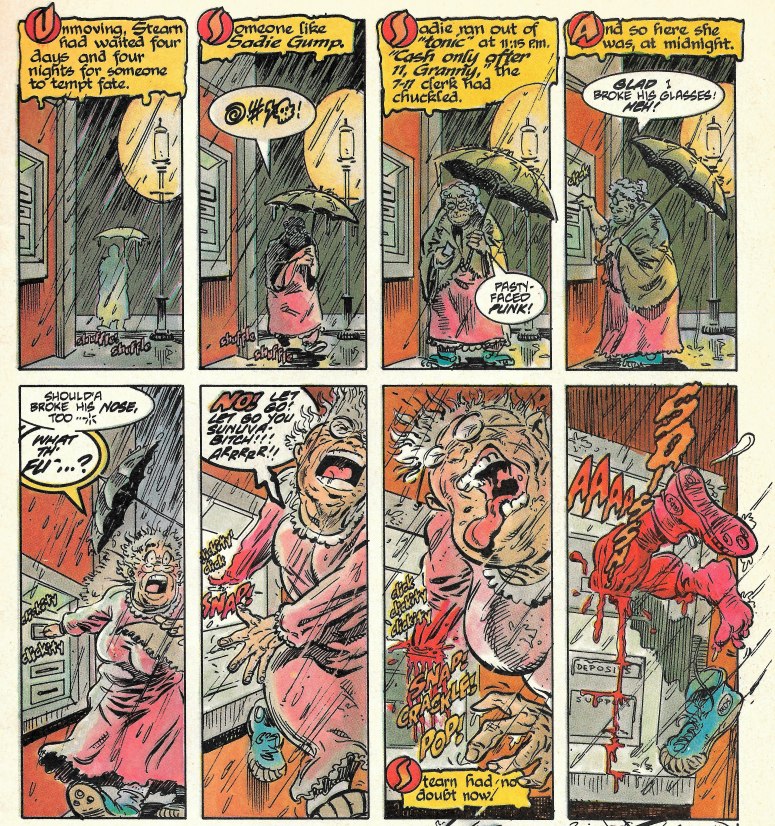 Investigating that bank is what's next for Mr. Monster, so he breaks in using his "skeleton key" (that's made from real bones) and finds a gruesome scene. 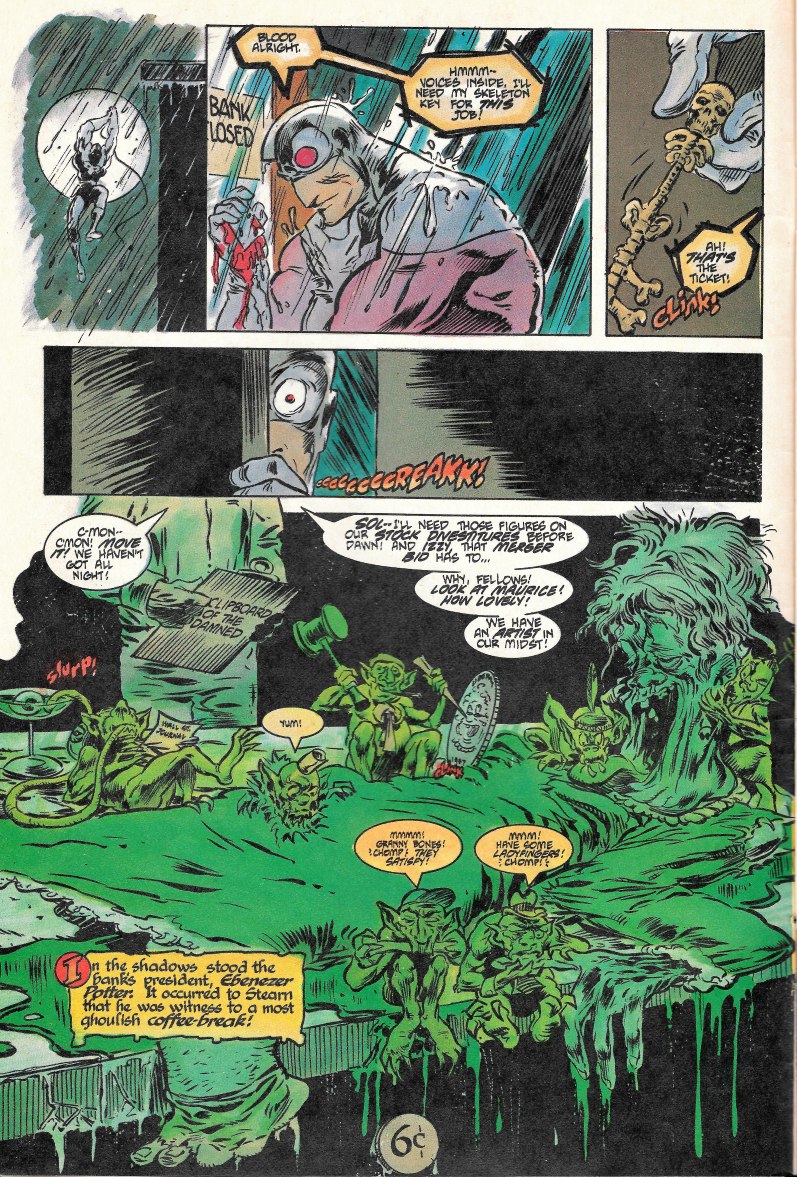 Appears the Bank Executive in charge has sold his soul to the Devil in exchange for a "free" workforce. Except for they aren't entirely free. Instead of money they take their payment in the flesh of his customers. Mr. Monster knows how to take care of him and his crew. 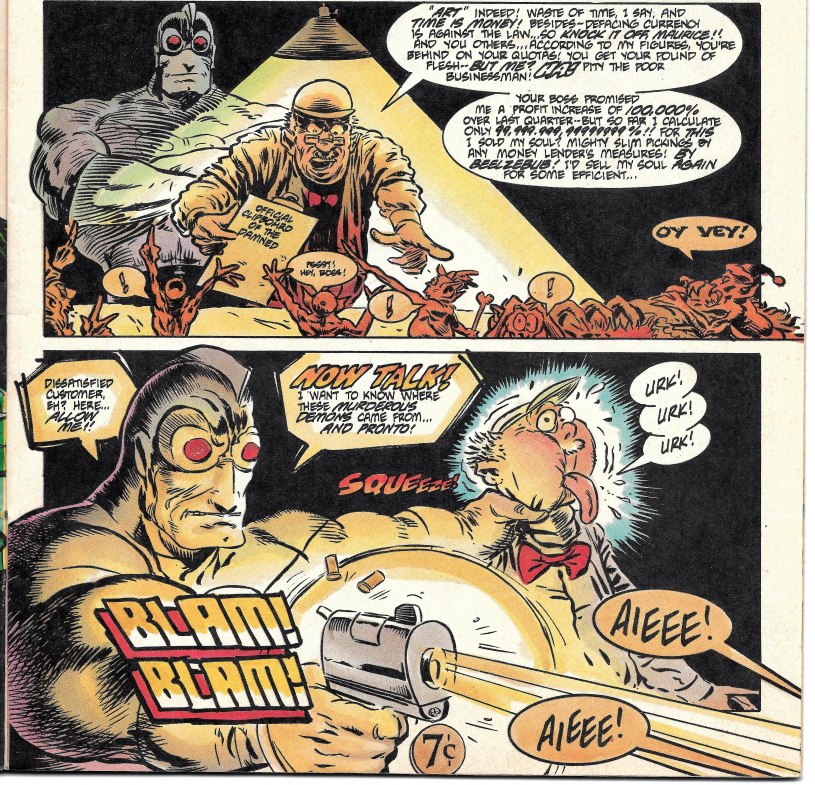 Or so he thinks. Apparently the bullets bounce right off the demons and one drops a gold bar on M.M.'s head. The Bank Executive doesn't have time to clean up two bodies and feels his indestructible demon army can protect him, so he just drops Dr. Stearn outside. 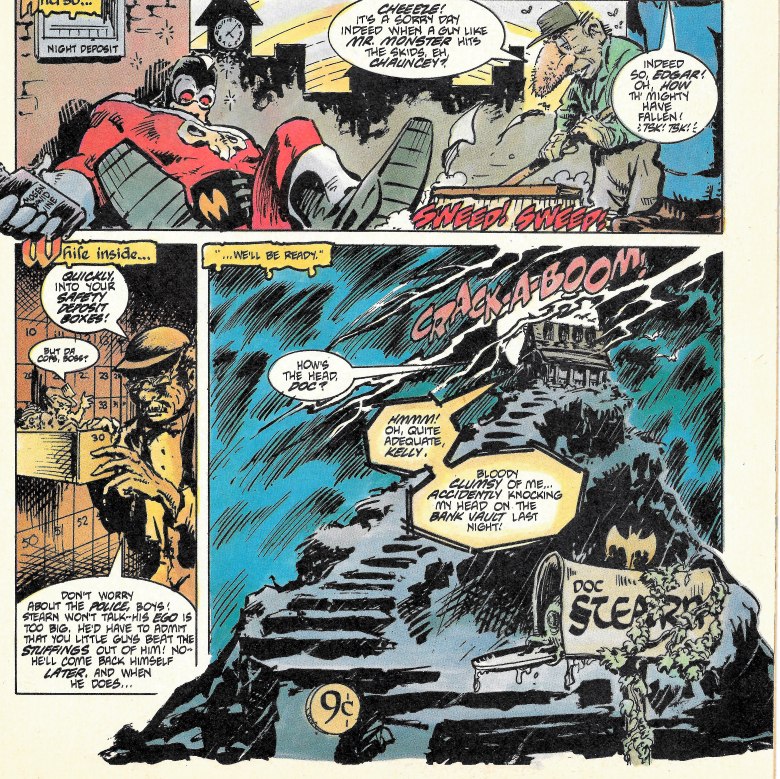 Except Mr. Monster is way more resourceful than that. The next evening he comes back armed with a very special weapon. First he waylays the Bank Executive with a wooden baseball bat and then he inserts a card into the ATM machine. Suddenly all of the demons turn first on their master… 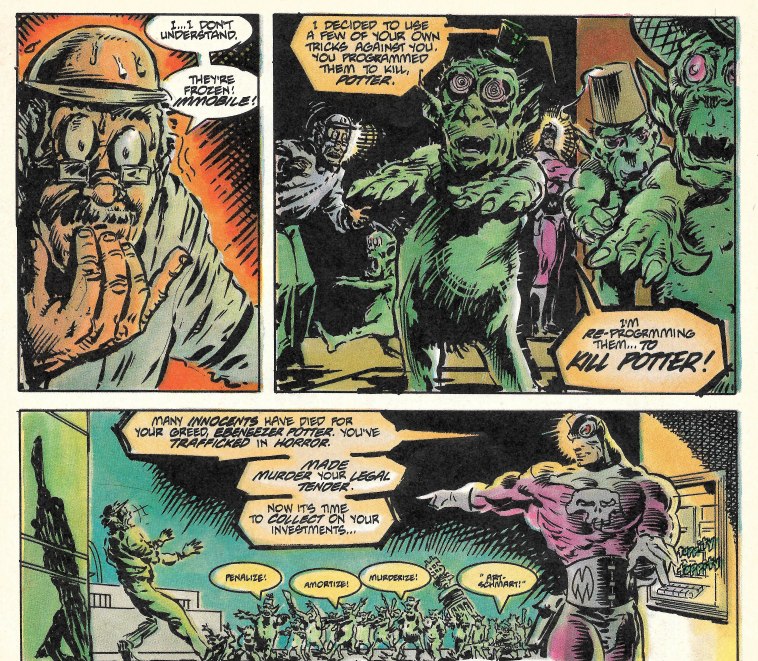 …And then on each other. 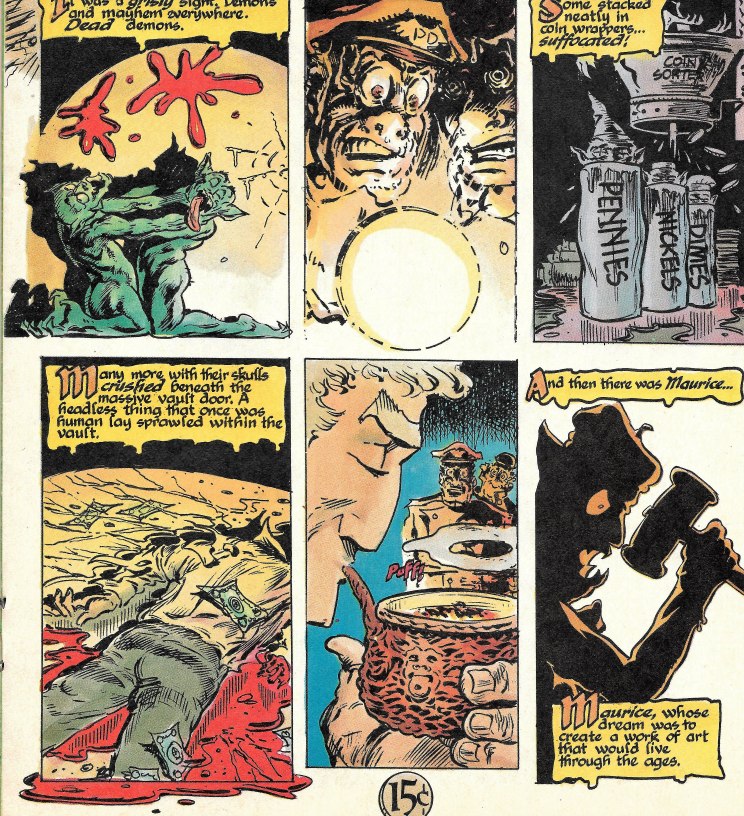 The commentary is from this police inspector who appears a bit miffed at Dr. Stearn. Then the ending of the tale is summed up in a long bit of exposition that I would sin anywhere else, if this wasn't so well timed. It did have me waiting with baited breath and besides the length of it, was pretty neat as a capper for the tale. 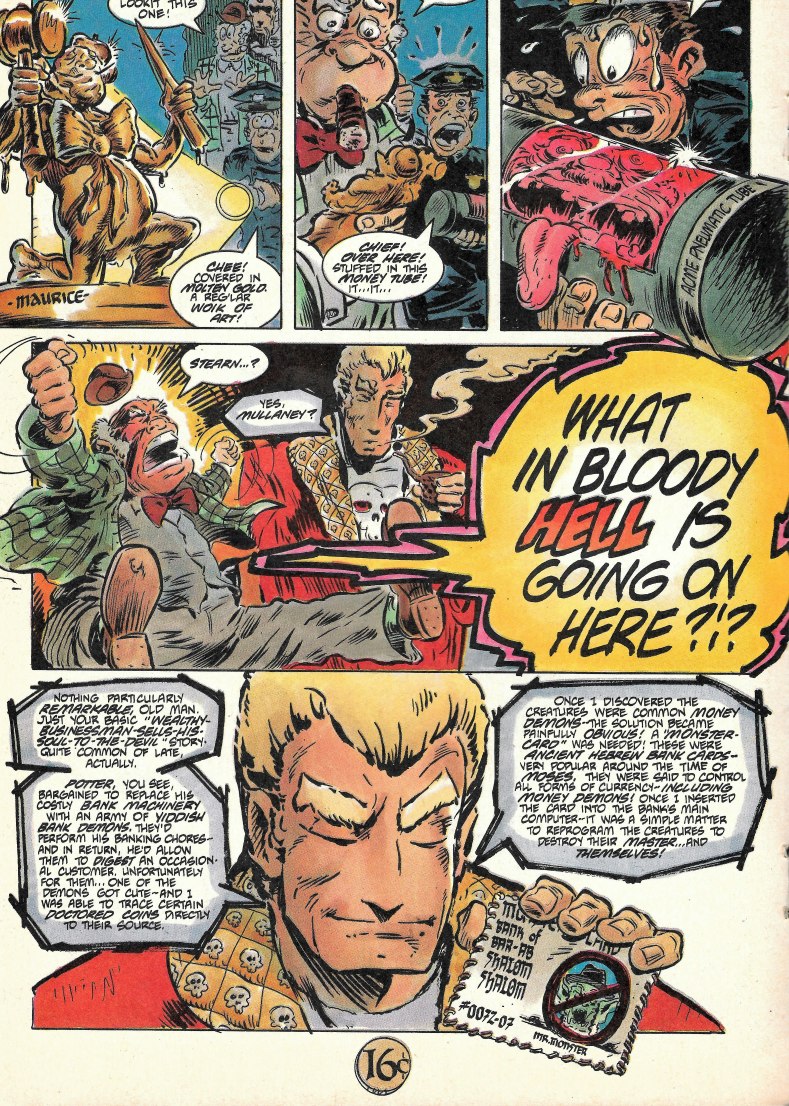 As for tale number two, it suffers greatly by comparison. First off the art isn't nearly as dated as the first one, losing that old-old school appeal. Bill Wray provides pencils, but they don't feel up to snuff here. See what I mean? 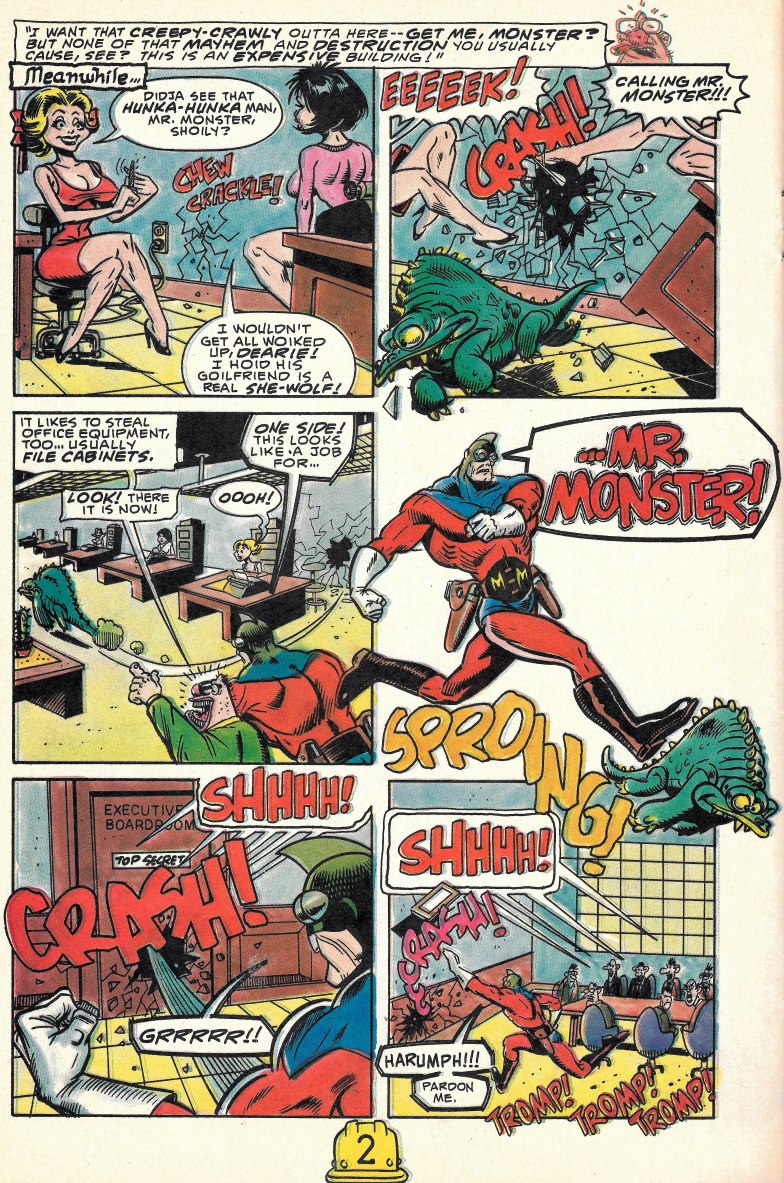 The story is pretty disposable too. Still Gilbert at the helm, Mr. Monster is asked to clear a green reptilian pest out of a building. He chases around for a bit and then learns it is part of a family of monsters living in the basement. He leaves them alone because the man who hires him is a jerk who won't pay him and this happens. 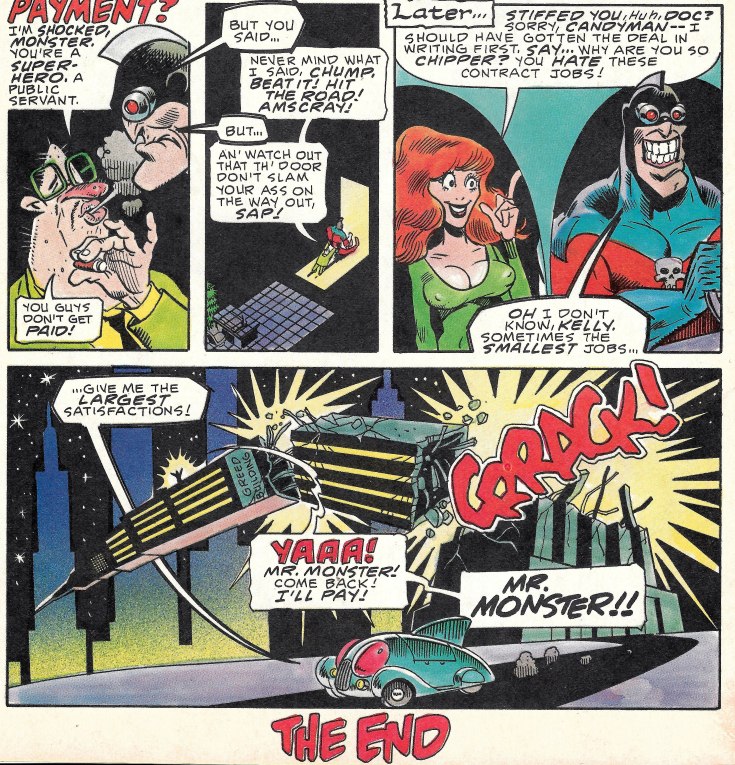 It's a much weaker effort that doesn't enthuse me.

Still that first piece is enough to guarantee a purchase out of me. As a whole, when the book shines it feels like an EC comic met The Spirit in a blender. When it doesn't, it is not offensive, just dull. Those high points make these a worthwhile find though.
Posted by SonOfCthulhu at 11:21 PM