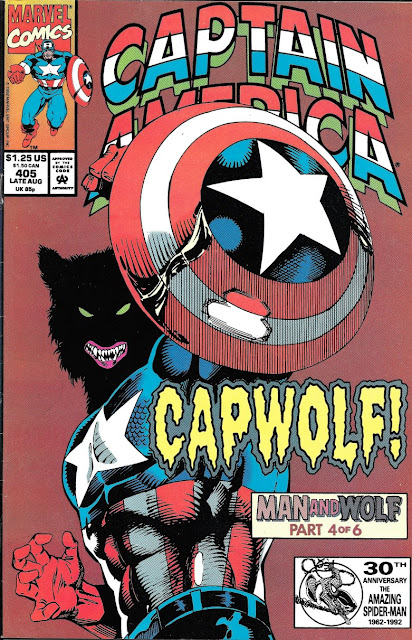 Marvel has always been known as "The House of Ideas" but notice how there's no "good" or "bad" conditional statement before the word "Ideas." Well, here is the proof that there should be.

Someone over that late Summer of 1992 said "let's turn Cap into a werewolf." Now as I've said before, this was during a period where the title was going bi-monthly and that has to put a lot of pressure on your writing staff for new, untried ideas. Additionally any changes made during this time that were reversed would have seemed short-lived. It is easy for an audience to go "dumb story" and move on, given that in two short weeks they would have the start of a new arc beginning. So if ever there was a time to get this out of their system, this was it. And no one would really remember it even happening with the flood of new issues coming after it.

History always remembers. As does the Crapbox. And neither of them will let me forget.

For those of you joining us with our story in progress, we are up to issue four of a six issue arc. The Crapbox only yielded the issues 3-5 to me, but they are the core of all this silliness. Last issue Cap was knocked out by a mind-controlled Wolverine and taken to the lab of the mad scientist Dr. Nightshade, a young woman who just loves her some werewolves. Nightshade is working for Dredmund, some kind of evil magical weirdo who ALSO likes werewolves for some reason. Also in his employ is Moonhunter, a jerky dick who leaves people turning back to human from werewolf form in the middle of a city street with no clothes.

Why is all this going on? We are unsure at this point. Something, something…take over the world, I think.

OH! And Dr Druid is there too. At least I think he is. The guy is about as handy as a Swiss Army Knife that's been superglued shut.

But where we start is Dr. Nightshade's lab. Hold on to your seats, kids. 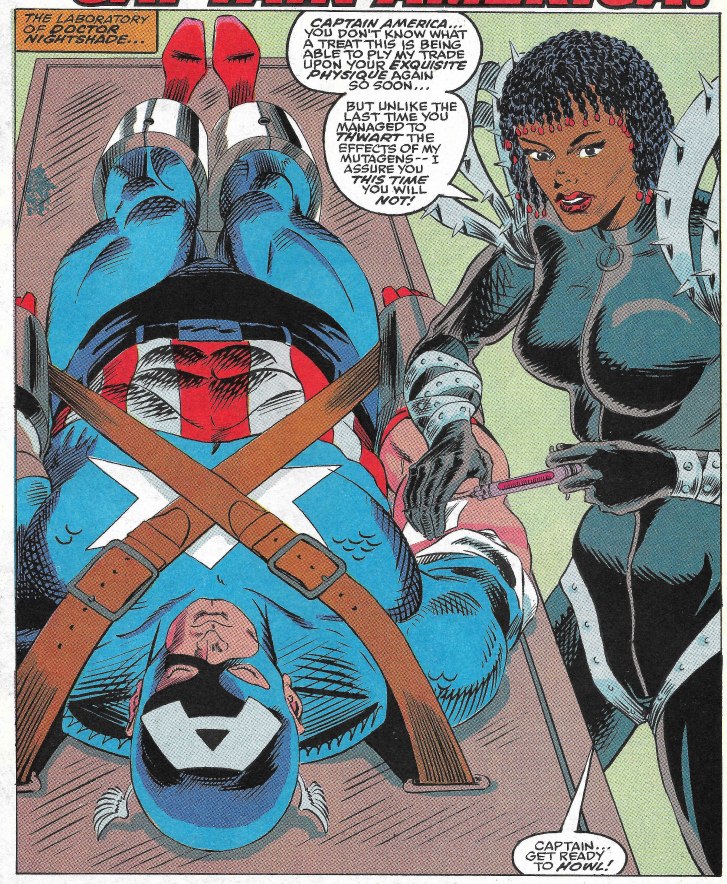 Like a bad cliffhanger in an old Republic serial, we begin were last issue ended, with Nightshade injecting Cap with her werewolf juice and using the admonishment "Get ready to howl!"

What exactly is Dr. Nightshade's deal, I wonder? Is she some kind of sick furry that wants everybody to share her penchant for pelts? I mean it's okay to BE a furry, but forcing everyone to become werewolves is taking things too far. That's like forcing everyone to be straight or gay. Let well enough alone lady!

Or maybe she's just a really overzealous dog lover? I don’t know, but I'm beginning to wish I had those two starting issues so I might have a better clue what the heck is up with her. Whatever it is, she certainly knows how to distill a good lycanthropy serum because… 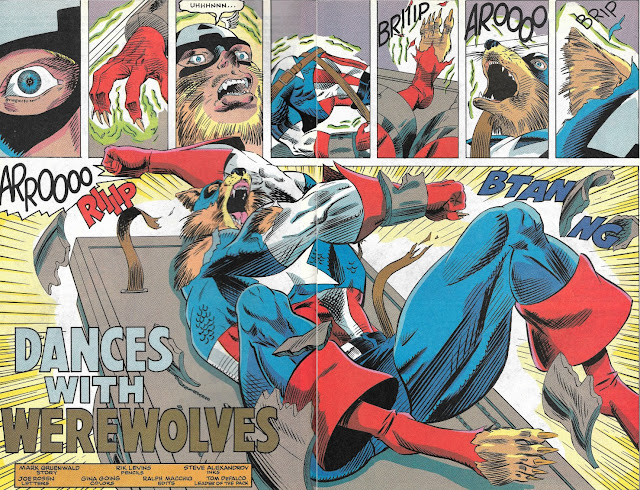 She turns Captain America into a werewolf.

It won't go as easy on them with Cap as it has with the other werewolves. He's still part super-solider. Before Dredmund can wolf-mind-control him… 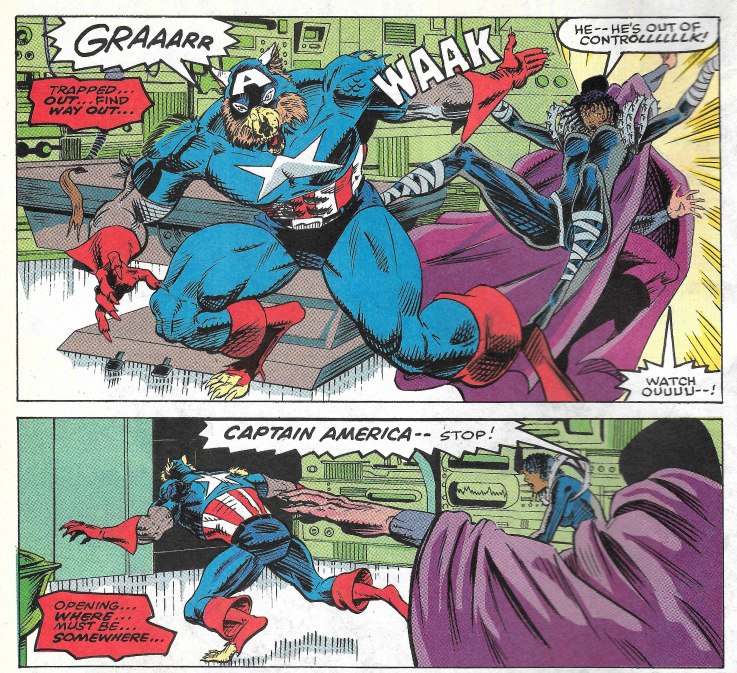 Note the red boxed thought balloons. Those are CapWolf's and they make this whole book a joy to read because every moment you can hear how mentally challenged he is as the werewolf Captain. Like this next part where he remembers to take his shield. 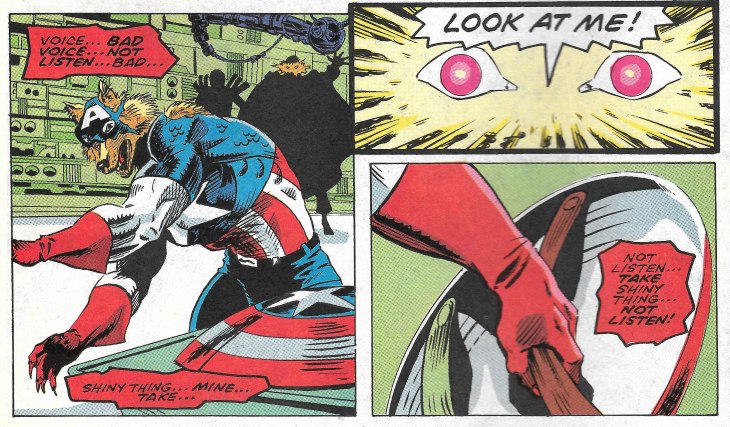 Or this part where he goes outside.

I'd joke about these but…I can't. It's like talking bad about your neighbor's poorly housebroken German Shepard. You expect Cap to chew up the bad guy's shoes and throw up all over his new rug.

Cap is getting away now and Dredmund can't have that, so he forces a random group of passers-by to transform into werewolves and hunt him. Note this the first look at his face that we've been given. Anyone recognize him? No? Me neither. He's just some random jerkwad with werewolf controlling powers. 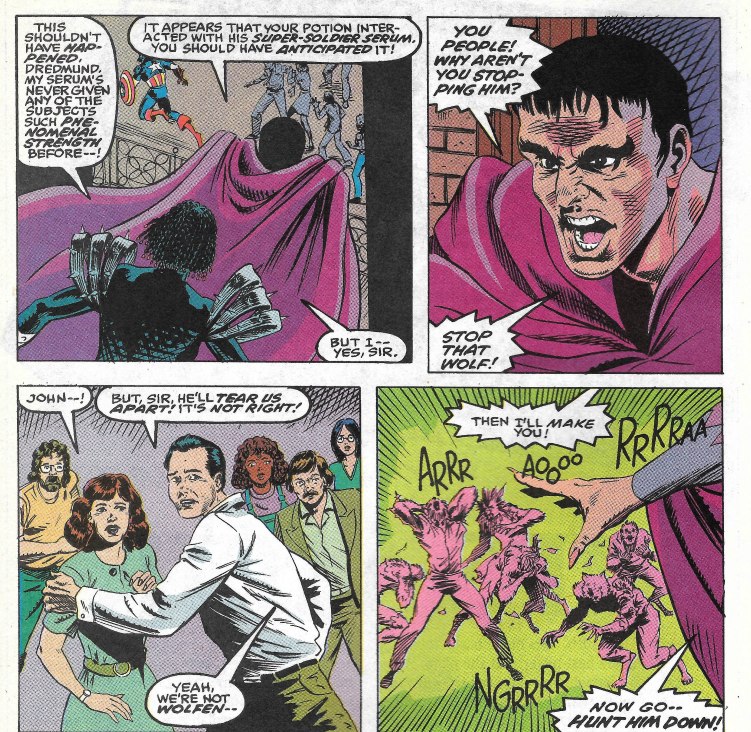 Meanwhile Dr. Druid is wandering around the bad-guy's house wondering if Cap thinks he's abandoned him. Which he totally did by the way. Wolverine attacked them both and Druid-baby left. Cause that's his super power: being a big wussy. 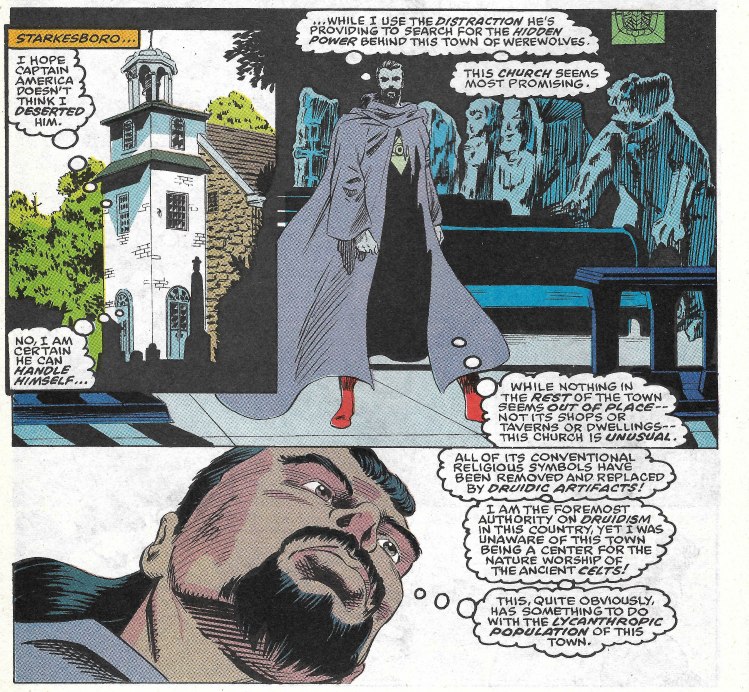 So it isn't any wonder that Dredmund sneaks upon him and puts on his evil hat. Then the battle of Druidic wills that we've been waiting for all these issues takes place. 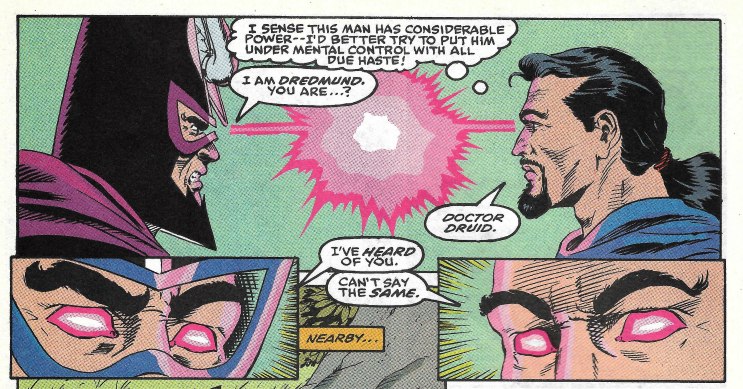 (Actually have to give a point to Doc Druid here, that was a third degree burn there)

Cap is hounded (ha!) by the werewolves, still mentally slow and beginning to more and more resemble Rocket Racoon. I know Ric Levins is doing what he can here, but there are seriously some issues with the costume staying intact on a werewolf body and not looking completely and totally goofy in most panels. 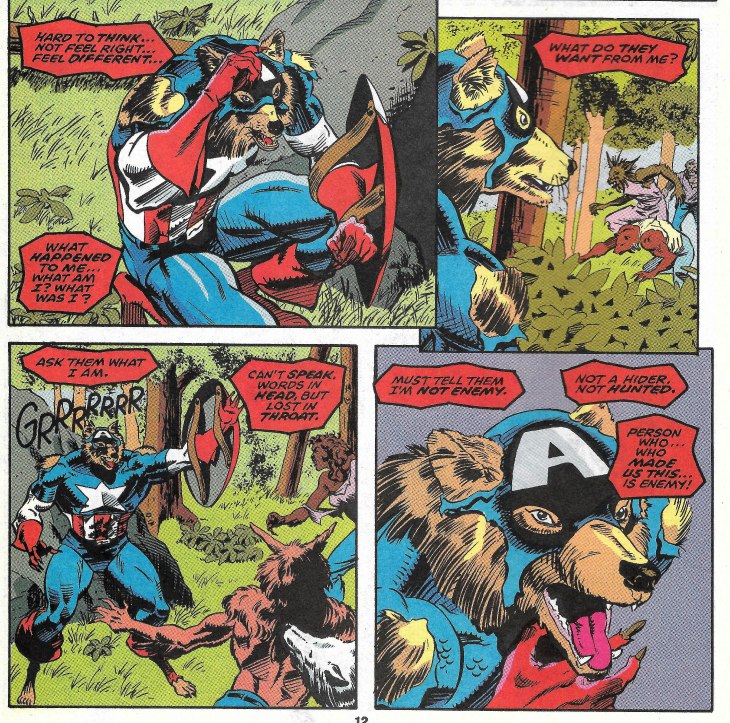 Captain America has always been about hitting with both his fists AND his ideals, and it is during panels like these that you can't help but chuckle a bit at his inability to articulate his thoughts.

It's about this time that our special guest from last issue shows up to again, that guest being mind-controlled Wolverine. 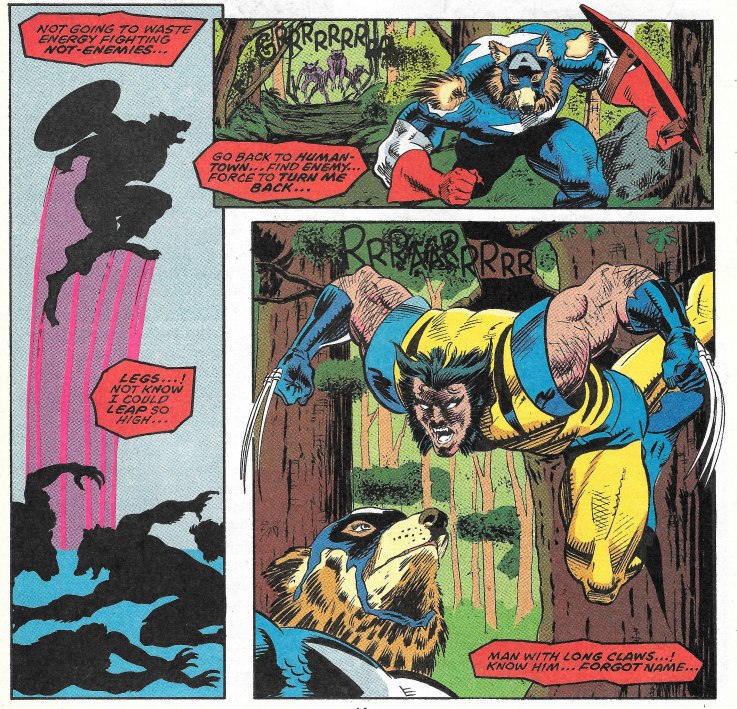 Cap may not be able to remember Logan's handle, but he does recall enough to know how to handle him. 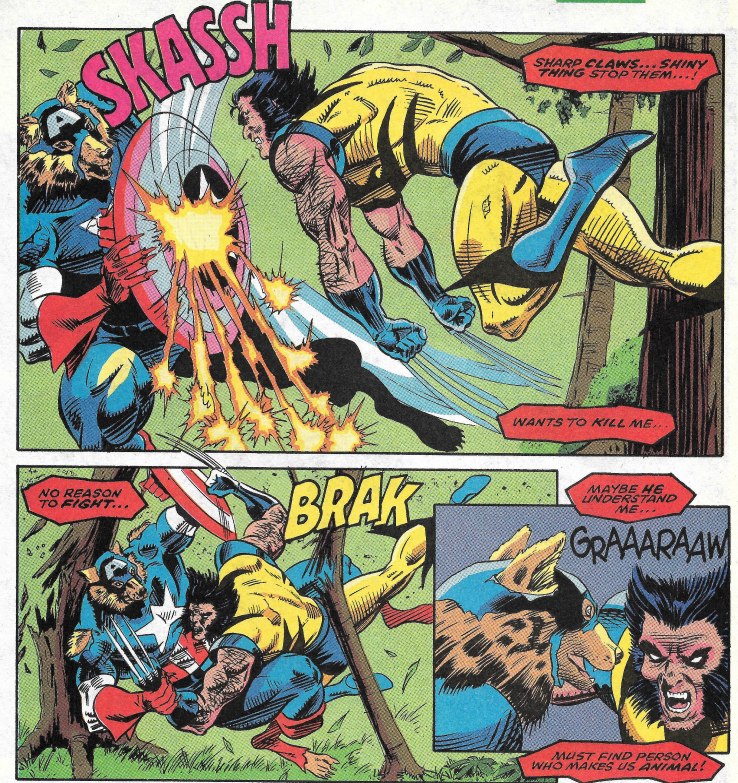 Or at least he does for a bit. Then he gets cut. And it all goes to the dogs from there. 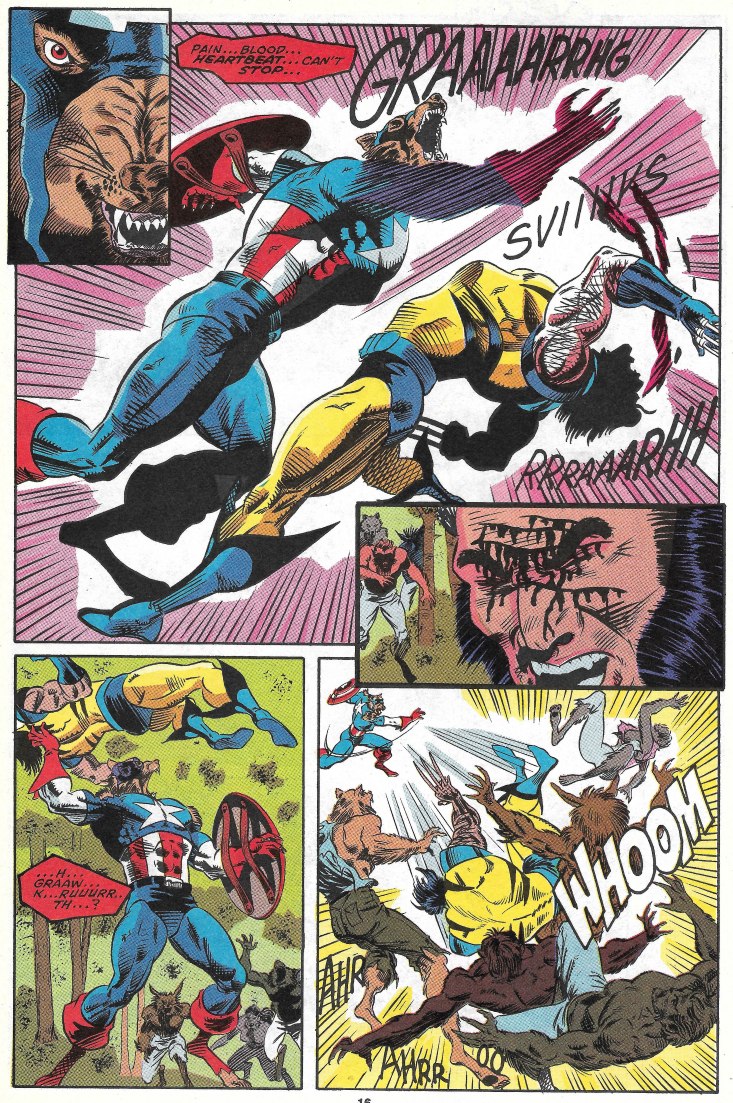 CapWolf literally screws Wolverine up, and then uses his limp body to take out about six other werewolves. I hate to admit this but aside from how flipping crazy those panels are, I'm smiling at seeing Logan brushed off so easily.

With all this fisticuffs going on outside, it is time we check back in with Dr. Druid's battle with Dredmund. 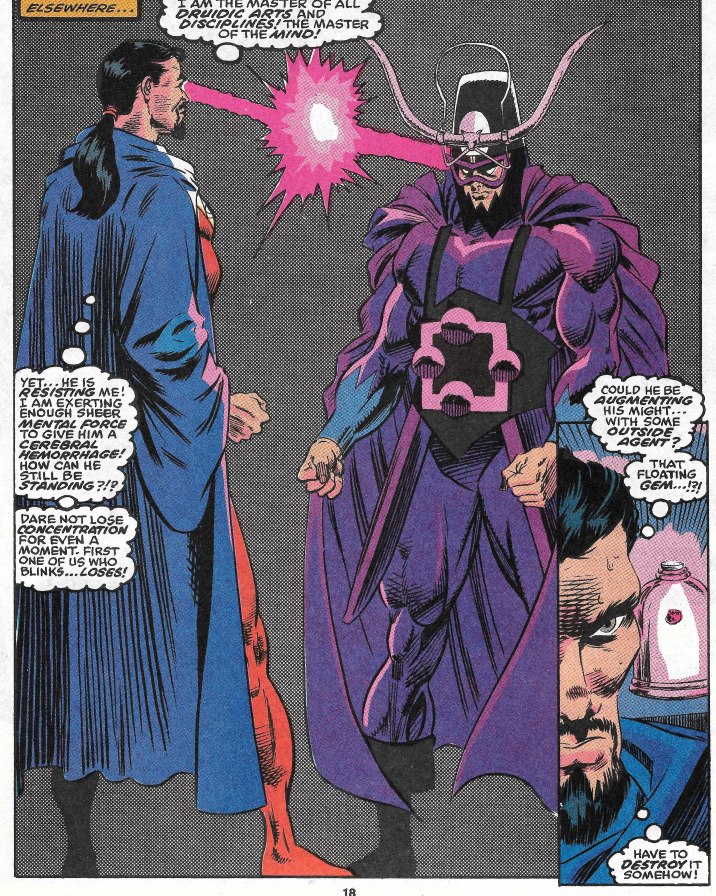 So they are just standing there? That's it? Sweet jeebus, what boring ass powers are at work here? At least Dr. Strange gets to shoot mystic bolts and make magical shields. These two are battling with all the intensity of two kids having a staring contest.

Imagine, if you will a Dr. Druid ongoing. Every issue he meets a new foe he has to defeat. The battle starts and the penciler draws one panel of the two of them "fighting", he then takes that panel to the Xerox machine and copies/pastes it on each page for the remainder of the issue.

It looks like the two of them will be a while, so let's move on shall we. Off to Moonhunter, who decides it is a good idea to lasso CapWolf… 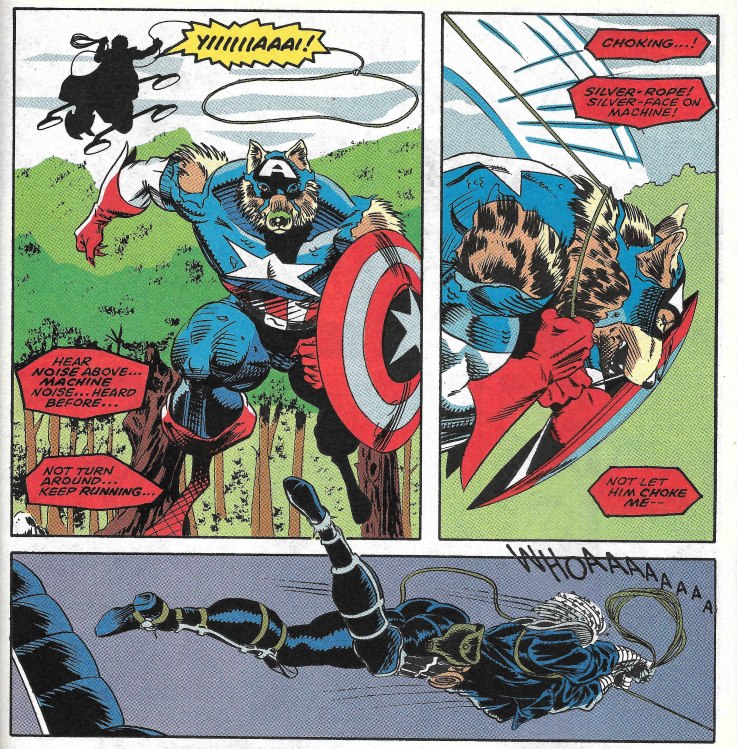 …and promptly realizes how wrong he is. I do love this reaction though: 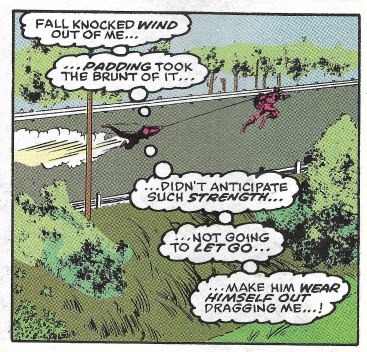 "I've used terrible judgment, but I'm a tough supervillain, so I'll just let him DRAG ME until he gets tired." I don't know what to say. I hope Moonhunter gets the worst case of rugburns ever recorded for thinking such a stupid thought.

Deciding things were too interesting, the writer switches back to Dr. Druid who makes a stupid mistake and gets knocked out by Dredmund. Our villain has something in mind for Doc D. And to finish off the issue, Cap makes it back to the Dredmund's headquarters (dragging Moonhunter, I might add) and appears to fall under Dr. Nightshade's sway. 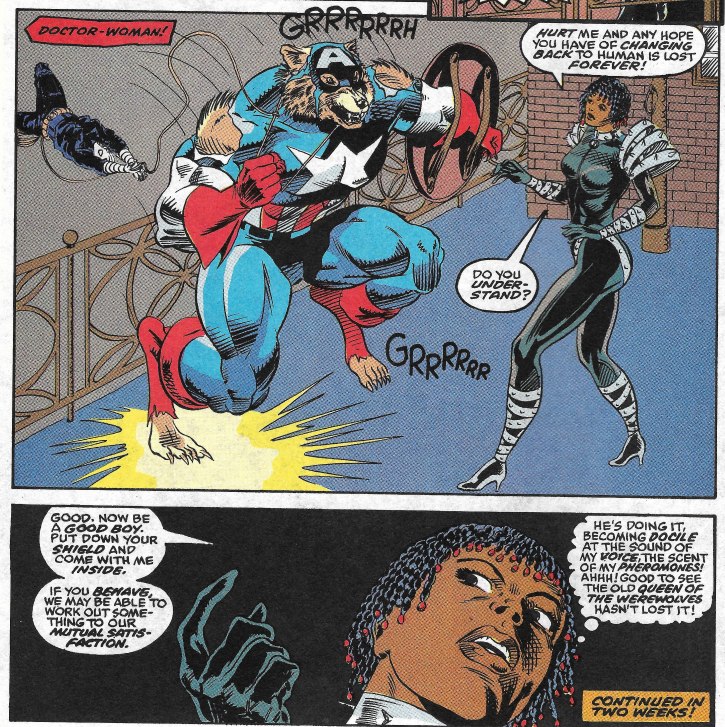 And as silly as this issue was and is, you ain't seen nothing yet….
Posted by SonOfCthulhu at 2:34 AM