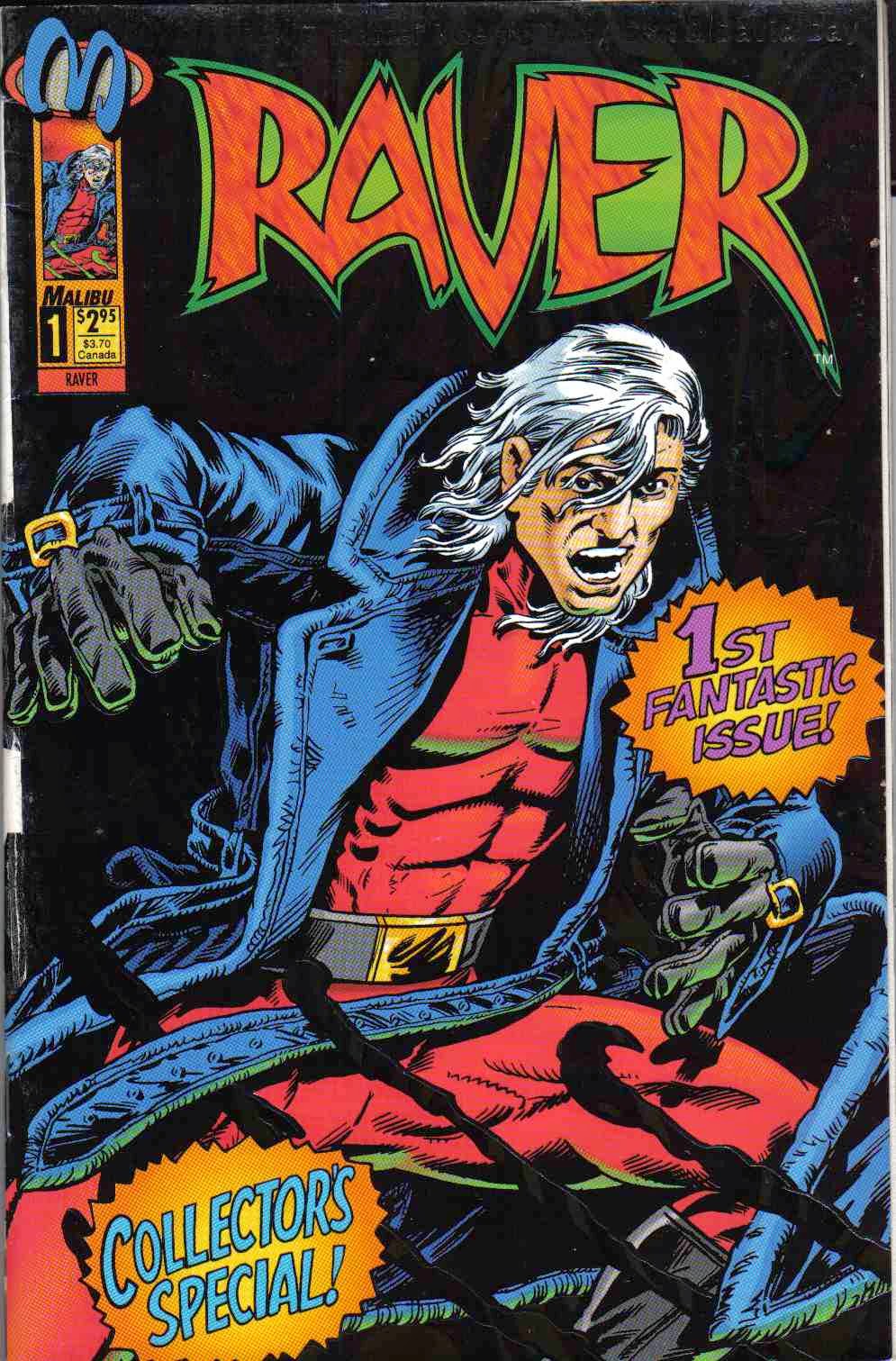 Ok, not really. That would have been much cooler than what Walter Koenig came up with. You may remember Koenig as Pavel Chekov from Star Trek. He joins the ranks of fellow Trekker William Shatner and Lost In Space’s Bill Mummy as having written for a comic book. Huzzah! Note that at no point did I add the words “good”, “well-written” or “intelligible” to the above sentence.

The background on Raver has to be found somewhere other than in the actual comic book. He is Norman Walters, an ordinary guy who is picked by aliens to save the universe from falling into entropy by creating new habitable planets using his bizarre mind powers. Unfortunately, Norman usually creates insane worlds with evil or malevolent rulers who can only be destroyed by his alter-ego, Raver. Trick is that on each new world Raver is given a new set of powers that equal his adversaries.

Right now you have this huge leg up over anyone who just picks up the book in a store because Koenig explains none of this in the actual book. Our story starts with Norman visiting his girlfriend Abigail’s work. She’s a rather mediocre grade-school teacher. 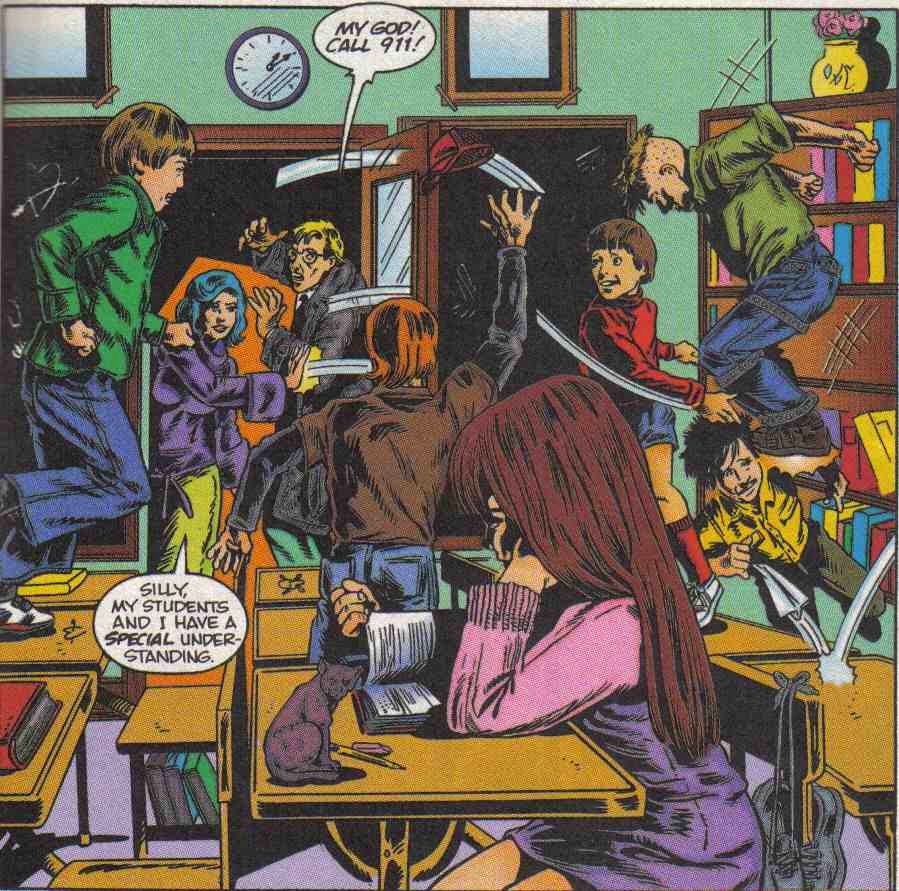 I know who’s not winning teacher-of-the-year. Abigail needs some training in Positive Discipline or maybe just a big can of mace and the balls to use it.

Note the two boys that start fighting. Norman steps in and tries to break up the fisticuffs only to have the kid with the fade go ballistic on him. 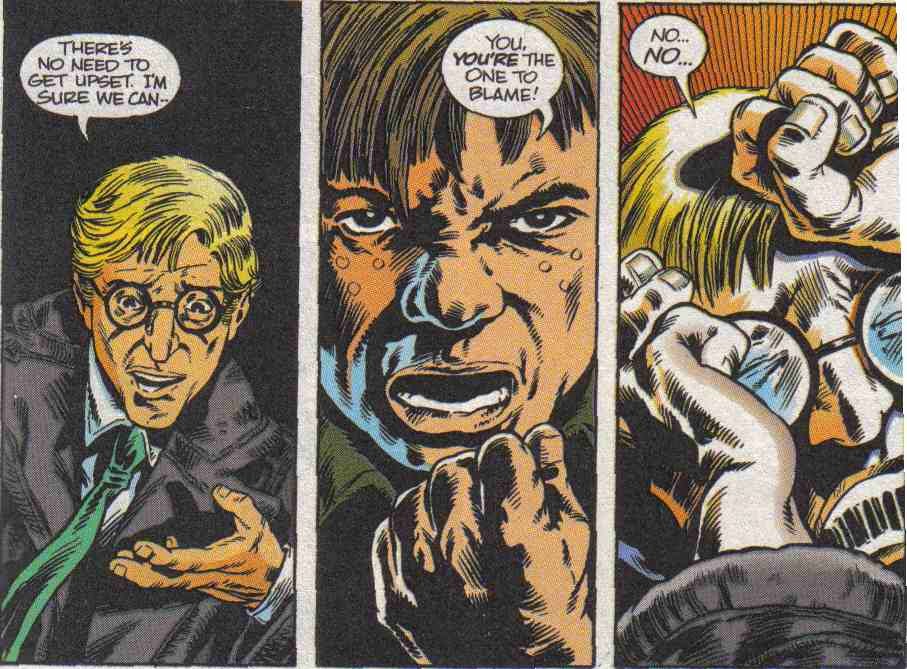 So big macho hero isn’t a description we can use for Raver. Heck I don’t think we can even call him a man at this point. He’s getting pwned by an 8-year-old. Not really. That’s just Raver’s power kicking in and creating a new universe. Here he is appearing on the newly created world like he just awoke after a night of drunken gay sex. 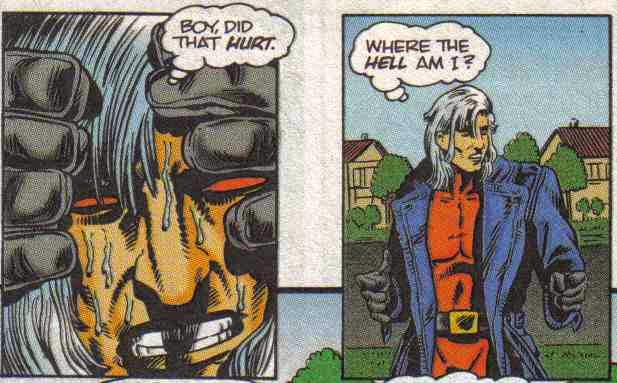 But Norman must have screwed up creating this world as the neighborhood ice cream man turns out to be a slime monster that eats a homemaker. This happens about three more times before Raver realizes that the enemy on this world is a shape changer and that he’s been given the power to change shape to fight him directly. 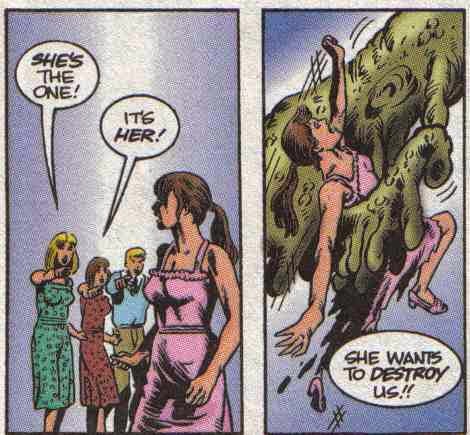 Did I forget to mention the art is by Dan and David Day. After Raver tanked they did booming business painting outdoor advertisements for strip clubs.

Okay, I can’t prove that last bit about the strip club painting. Meanwhile, the alien race that gave Norman his “Raver” powers is having doubts about him.

Yes, you read that right. The alien race in this story is called the -Ho-. Don Imus was script consultant. They were a slave race for many years to a race called the –pimp-.

They took this little girl’s what? I thought only boys had winkys?

Moving on, Raver finds the madman behind the selective monster attacks. It’s the kid with the fade all grown up. Wearing the same hair cut as he did when he was eight. This leads to an all out flying dinosaur/giant robot battle as everyone would expect at this point in the story. 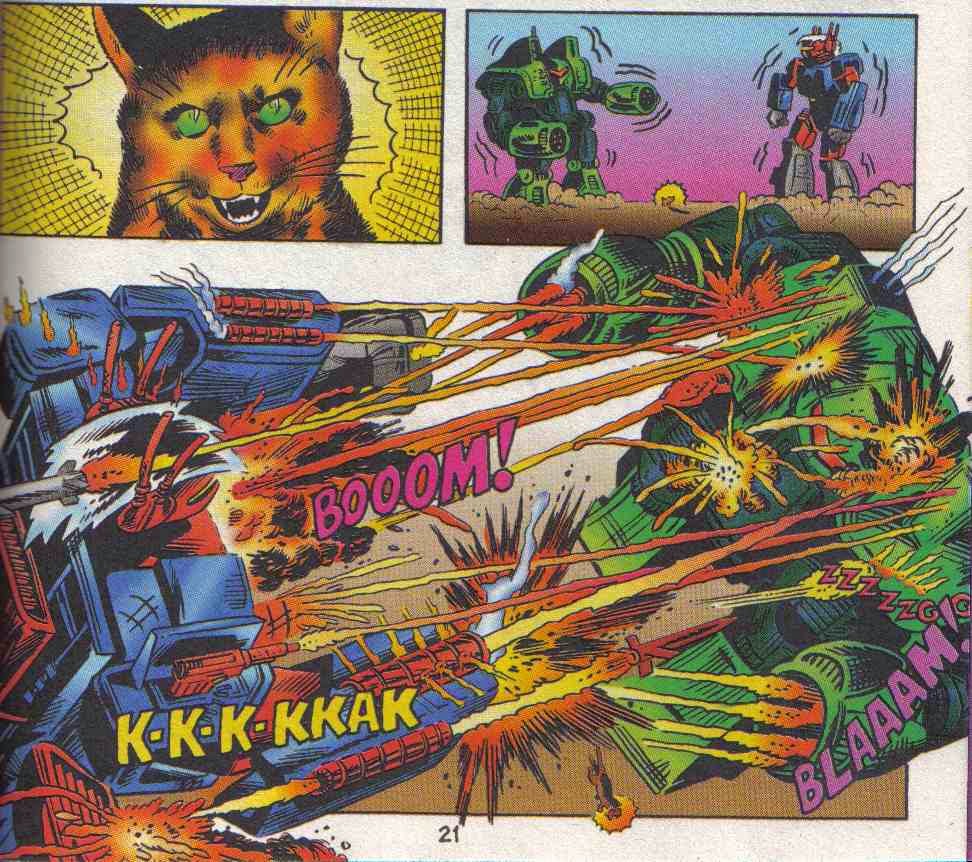 That cat’s expression cracks me up. If I were caught between two giant battle mechs, I bet I’d make the same exact face. In the end, Norman and the bully face off by turning themselves into 8-year-olds. The bully threatens to bash the cat’s head in and Norman says he’ll be his friend if he doesn’t. The bully backs down and they hug and are BFF. No, I’m not kidding about this either. And I’m not showing you because it’s even sillier than it sounds here. Just trust me on this one. And if you see any of those customized vans that advertise for Baby Dolls or The Jaguar Club, check the artist’s signature for me please.
Posted by SonOfCthulhu at 10:29 PM