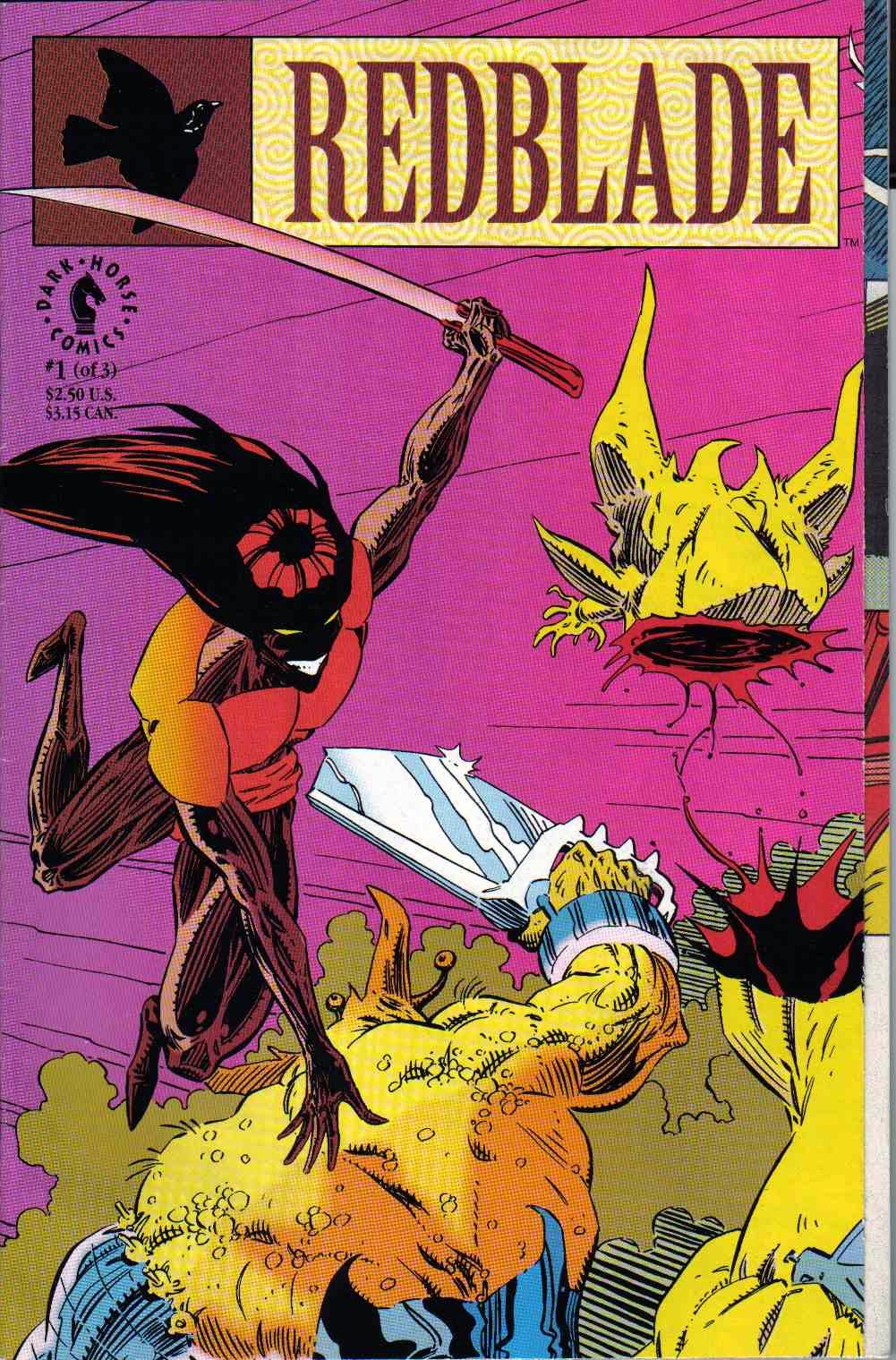 THE undead samurai superhero versus tech-demon comic you’ve been asking for.

Redblade is a guilty pleasure. A three issue run from Dark Horse in 1993 did not find a following and the character sank into obscurity. The book is a one man show presented by Creator/Writer/Artist Vincent Giarrano. Giarrano has worked on some of the big guys (Spider-man, Batman, The Terminator) but his runs were not that memorable to me. Currently the artist appears to be out of comics and on to more conventional work.

Mostly this issue features Redblade running around doing the same things that most of his counterparts in Image books were doing, hacking and slicing bad guys. While normally that would turn me off, strangely Giarrano somehow made this book endearing and managed to infuse something like a personality into the title character and his sidekick. I freely admit this book is trashy, but I warmed to the characters anyway. Kind of like how you can enjoy “Army of Darkness” but still see the cheap effects and inherent campiness of it all.


Also it’s packaged attractively, in a four page gatefold cover with art on both sides. Pity I didn’t get two of this particular issue, as I’d like to have had one to take apart so I could really see the inside cover picture. And the book never tackles Redblade's origin. Who cares, origins are for wimps. What this book is about is demon fighting. So we begin with Redblade attacking a group of demons in some other dimension. Here Redblade is kindly hacking away at one of them. Yah! 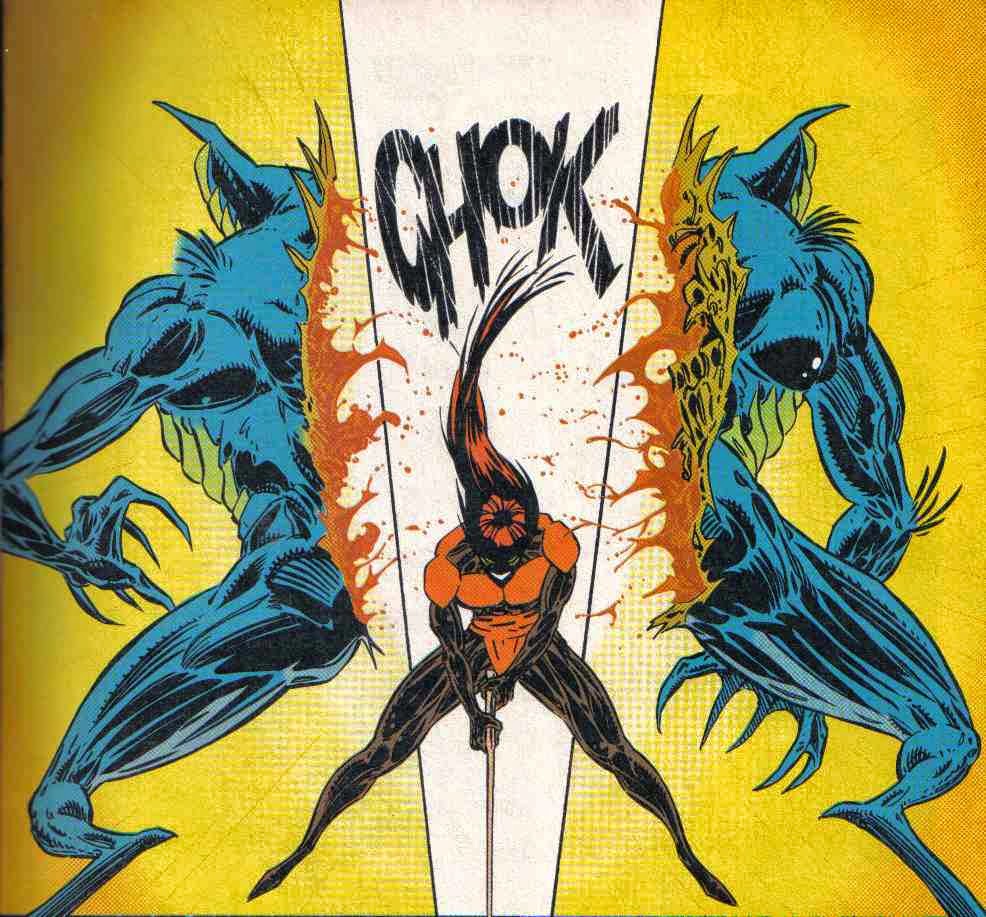 This demon was beside himself after his defeat. While Redblade chops up the remaining horde, there’s trouble brewing back on Earth. Seems someone has built a huge weapons factory that the demons could use to create planet-wide havoc and destruction. All they need is a human sacrifice to get things started. Lucky for them the corrupt and greedy CEO is about to remove an inspector that’s extorting money from him. 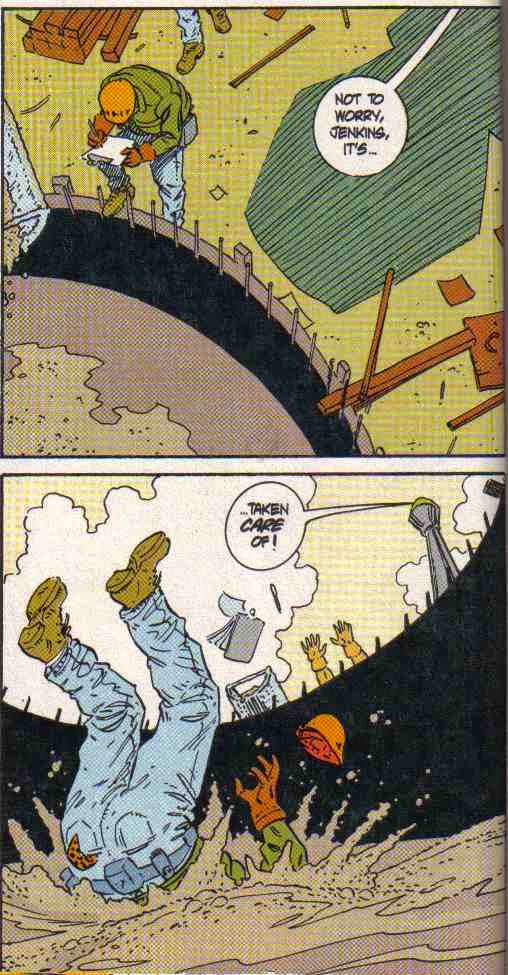 So he drowns in a pot of goo and then bursts from the container’s side covered in wet concrete only to have wires zip from the wall and electrocute him. I’m glad nothing complicated is involved in summoning these demons. What we are left with is the demon Engetsu, a long-time foe of Redblade. 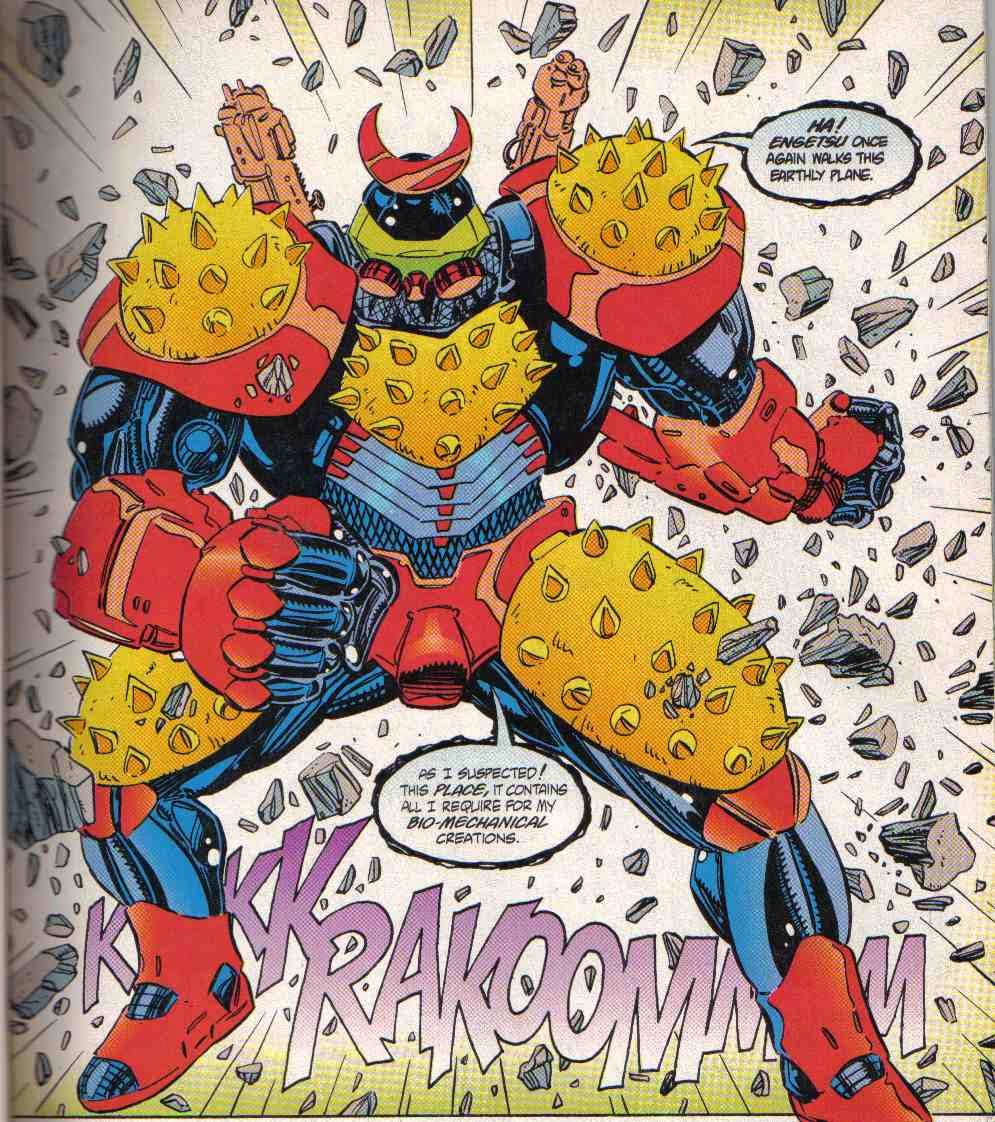 He looks like all the worst parts of my entire action figure collection put together. I see Micronauts, Shogun Warriors, Transformers and even a bit of Power Rangers in this strangely blended bad guy. Whatever his design, he’s bad news for the factory and its workforce.
Meanwhile, Redblade is summoned by his master Ganko. She? He? (hard to tell sex when someone looks like a spider combined with a plant bulb surrounded by floating eyes) knows all about Engetsu and orders Redblade to help. 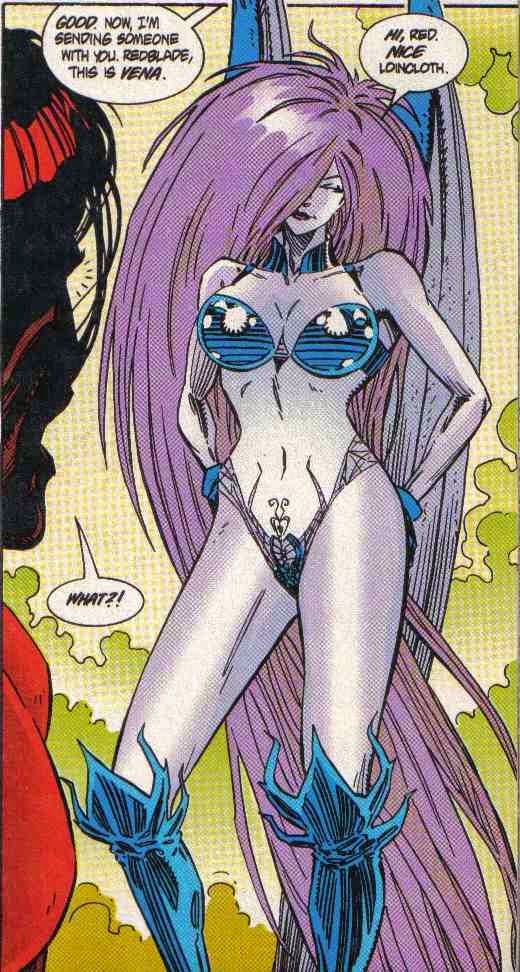 So suddenly Redblade is a buddy-cop movie as well as undead samurai vs demons possessing humans book. I’m still along for the ride. At least I get a semi looking at Vena’s chrome-plated chest and G-string. Ahem, anyway… Engetsu meets with his boss, a nasty demon called Gorn who gets a two page spread. Gorn sends Engetsu a lesser demon called Tull by process of human sacrifice. 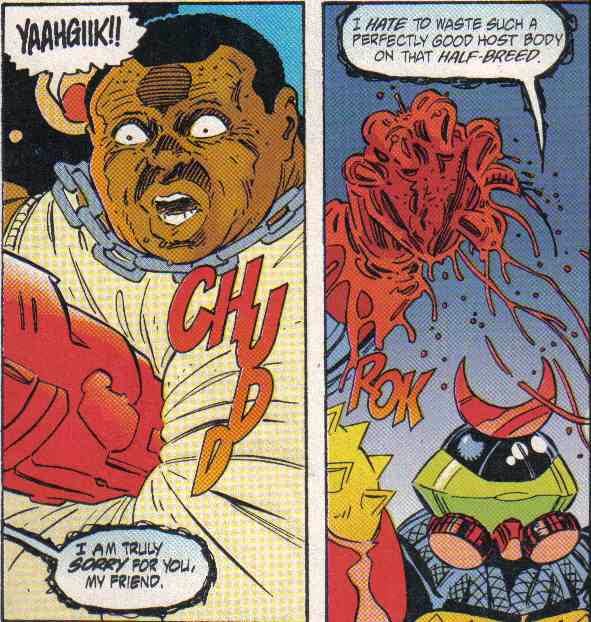 Next, Engetsu has turned the automated factory into a living demon production facility. It borgs all the workers including corrupt CEO guy and begins moving toward the big city. On the way it kicks a security van up into the air. 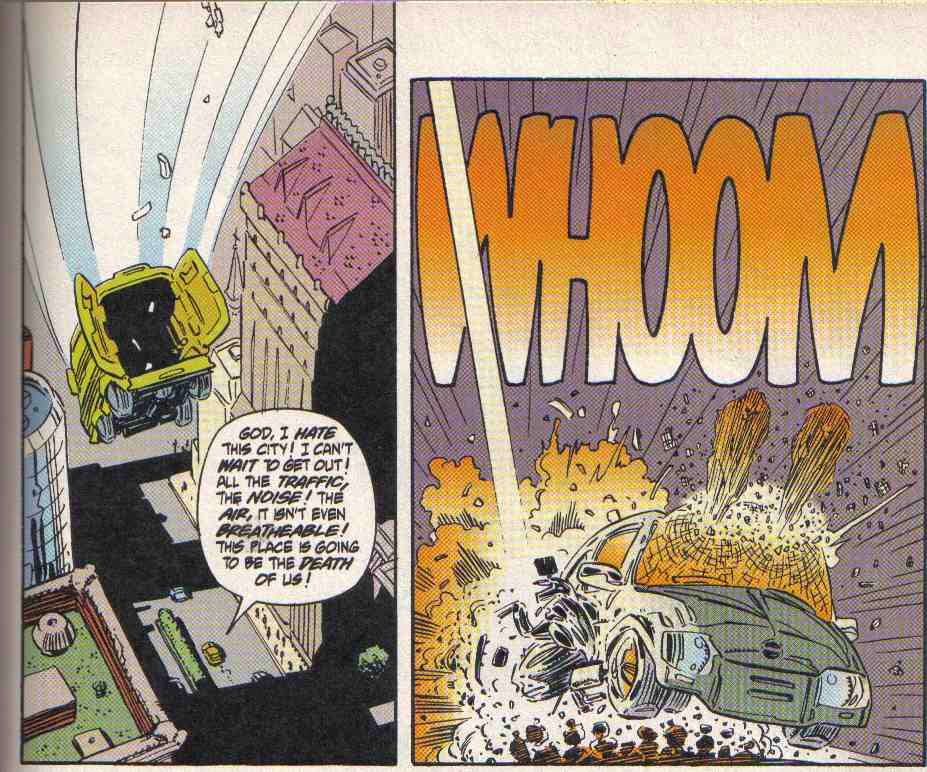 That’s actually in very poor taste, but I snickered anyway. As the demon-factory arrives, Redblade and Vena appear in Earthly guises. Seems Ganko gets their sexes reversed. Again, this is silly but I cracked a smile at the way Redblade reacts. 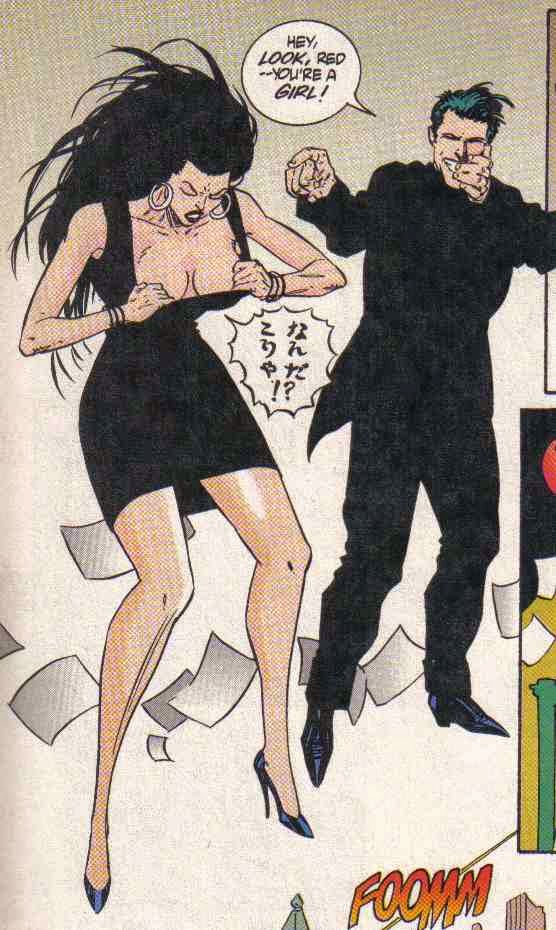 Is he truly shocked or just trying to check out his own rack? We’ll never know as the demon-factory shows up and the credits for issue one roll. In all, an enjoyable ride from Giarrano and one I would have enjoyed seeing more of. If only all the trips to the quarter bin uncovered such gems.
Posted by SonOfCthulhu at 3:47 PM