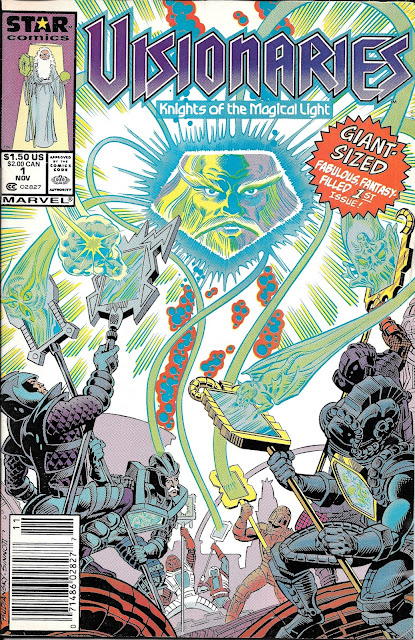 Hasbro sticks it to us again

There must have been a huge profit from those GI Joe action figures. I say that because here again is Hasbro coming back to the same watering hole with yet another action figure line, this time starting in 1987. And since every action figure line has to have some hook to make it seem different from the last, Visionaries: Knights of the Magical Light had one too. 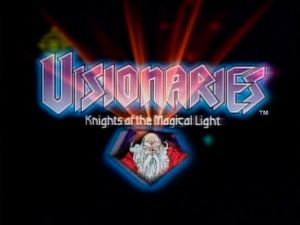 Sticks. Each action figure came with a stick.

Many of you are saying sticks are pretty much an all-purpose toy, appealing to both girls and boys. A day walk through any nature trail with a child will undoubtedly lead to them having a stick in their hand. It may also mean a long discussion about why the stick isn't coming in the car with you and how you already have similar sticks at home.

So action figures with sticks should seem like a sure-fire winner.

First off let me explain that we are not talking about actual wooden cudgels here. We are talking about small pieces of plastic with a "oh wow!" Hologram sticker on them. They are not something you can use to menace your sister nor bash up against a tree trunk a million times to see which one breaks first. 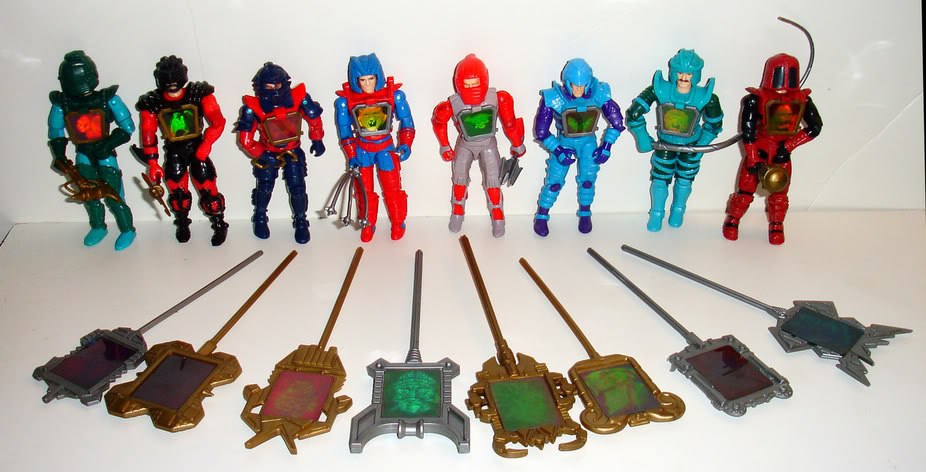 These are kind of lame in those regards. In fact it is kind of bad form to even call these sticks. These are more like toothpicks with attitude. The marketing materials called them a "staff," but I know a stick when I see one.

The hologram was the big expensive draw here, but even in the 80's I wasn't impressed by it. Big fat meh.

Yeah, I wasn't a big fan of these figures when they came out. I was beyond the toy buying age anyway, but that doesn't mean I didn't have a healthy respect for the industry and a love of product design. I was working my way through college and my major at the time was Marketing/Advertising. So I could take a purely business approach to analyzing them and state that I didn't think they would sell to their target market.

Even with the push of the good-ole double wammy of comic book tie-in and animated television show. I did not realize how much of the airwaves the late '80's was cluttered up with these types of toy tie-in shows. If you feel like you've missed something, you can start watching the 13 episodes that comprisedVisionaries one and only season HERE on Dailymotion. 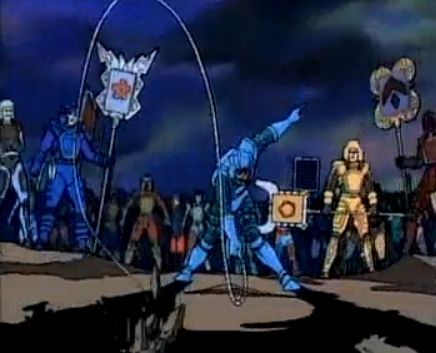 But for most of us it will suffice to know the show existed and that the first issue of the comic book mirrors the first episode in certain parts, the book there after diverging into different adventure stories. The animated stories are quite a bit less complicated and a bit easier to understand. The characterizations are clearer on the show than in the book too. Something about the color pallet used in the comics also leads to most of the Visionaries being indistinguishable from the others. However both dump a dozen or so characters on the audience and there just isn't anyone who can follow all of this detail unless you've picked out which action figures you want for your 8th birthday.

Let's dive into this one at the beginning, where the planet Prymos is about to suffer a cataclysm that will plunge it back into the dark ages. It all starts at this hovering, cliff-side restaurant complete with robot waiters. 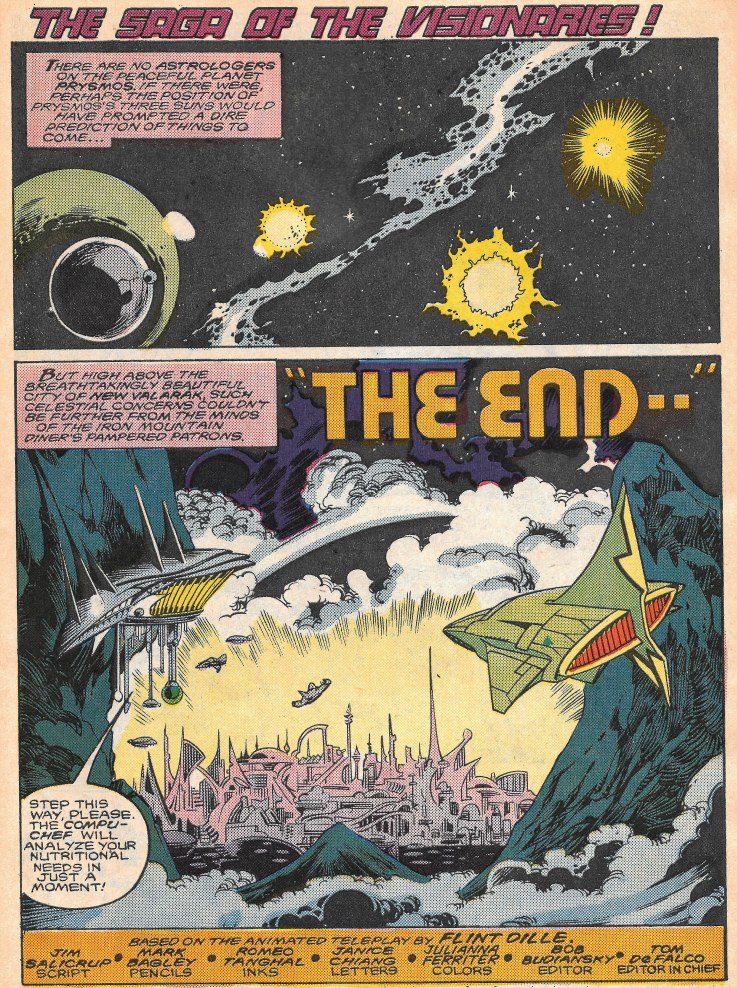 A sudden appearance out of thin air of this wizard by the name of Merklynn causes the robot waiters some trouble, as does his surly attitude. He pretty much acts like the drunk guy at the company Christmas party, wrecking things and shouting while shoving people around. So much so that he gets a robot sobriety test. 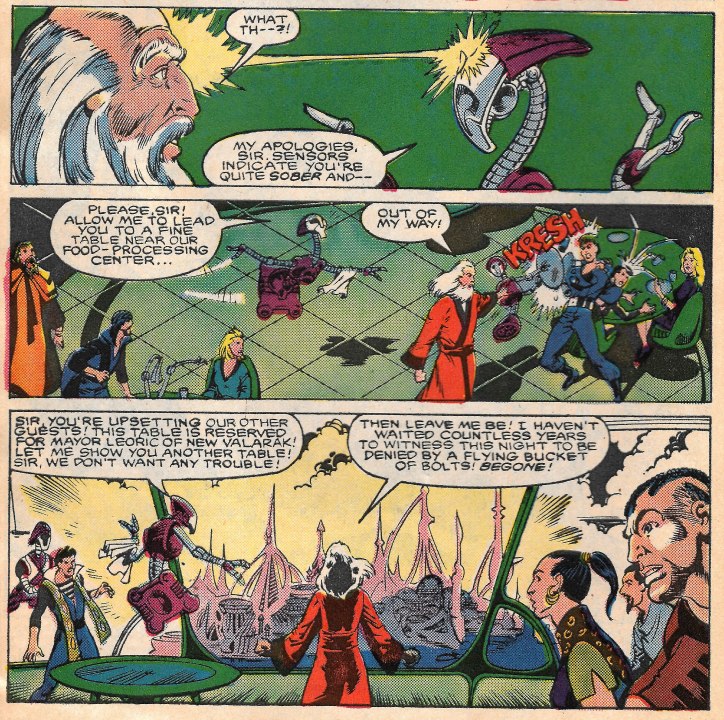 Merklynn acts as the catalysis of much of our action later on in the story. He takes no sides but appears be acting to find whichever person would be best suited to lead Prymos into the next great age. What he is so excited about here is that the planetary alignment is about to cause all the technology on Prymos to quit working and the rise of an age of magic and sorcery to commence. 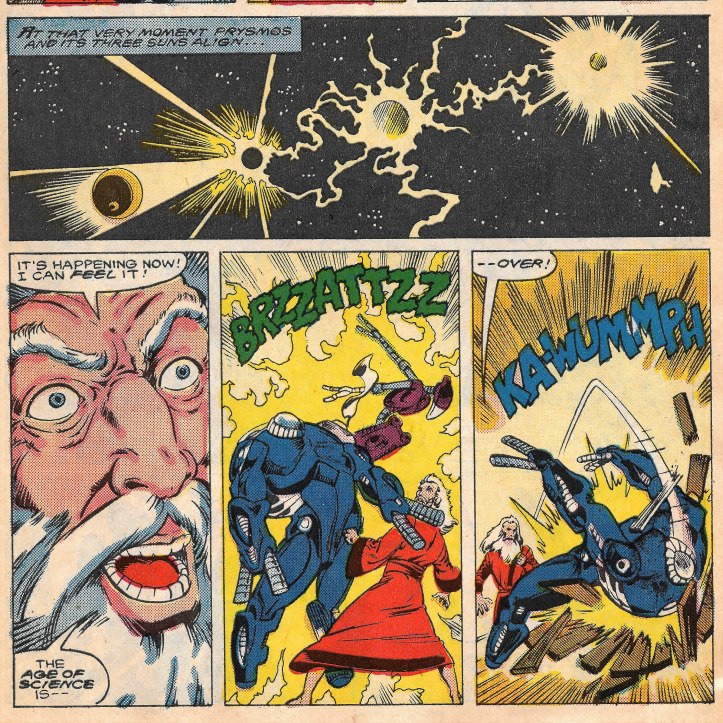 The floating restaurant falls from the cliff, but Merklynn saves everyone by teleporting them to the ground. 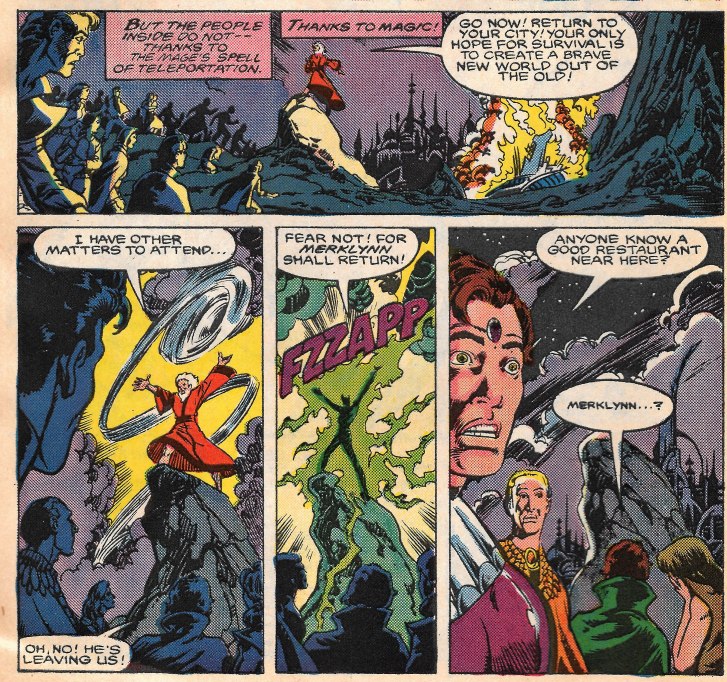 Saves them so they can begin a desperate struggle for existence in a world without the technological advancements in medicine and science to be able to support all of them adequately. He leaves them there as the society descends into a state of feudal barbarism in which most of them will probably die of starvation, lack of adequate medical care or in battle with others for necessities. Swell guy that Merklynn. 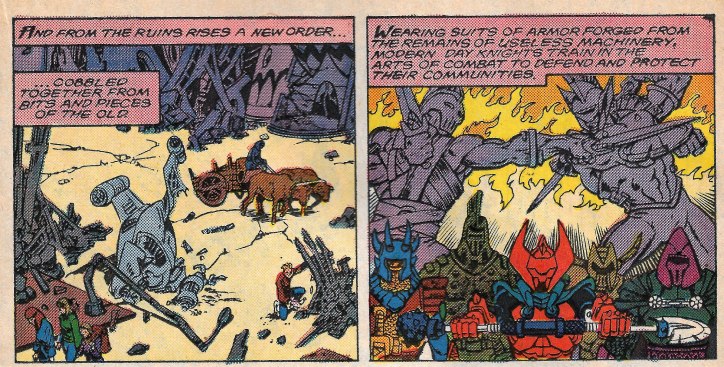 And it's here that we meet the knights who will make up the Visionaries of the title. There are the bad guys, like Reekon and Mortdredd here, who will eventually band together behind Darkstorm. They are pretty much all dicks. 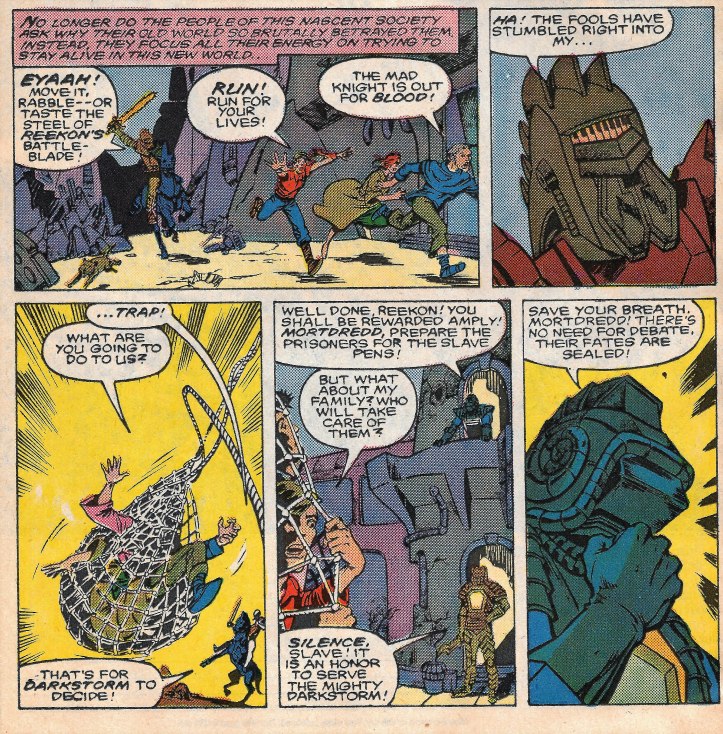 And then there are the good knights like Feryl and Ectar, who stand with Leoric in an Arthurian kind of round table way. And yes, the extra consonants/vowels stuck to their names does annoy me slightly. The fact that these two groups spend a majority of their time physically battling each other should come as a surprise to no one. What should come as a surprise is that the colorist does so little to make the knights stand out from each other or regular humans. It becomes easy to get lost in battles trying to figure out who is fighting whom. 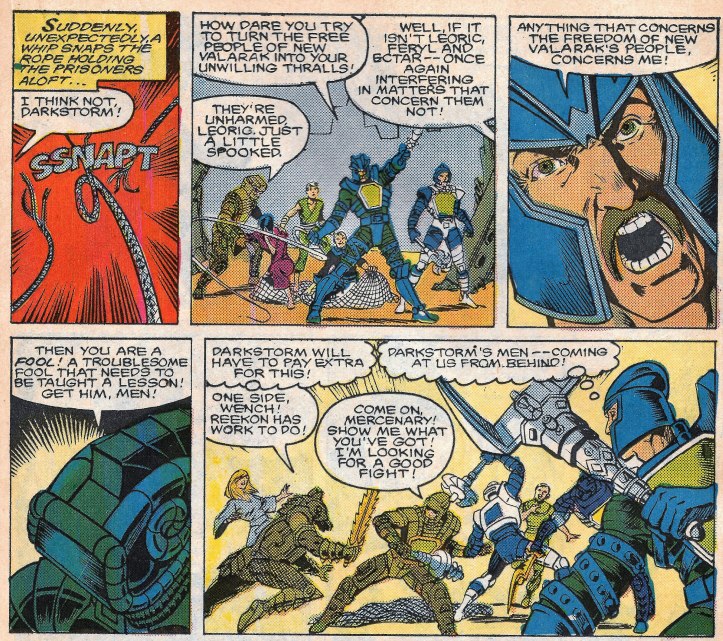 It shouldn't really as there are fourteen of these little rascals to remember, all of them having some part to play in this 44 page drama and most of them totally unmemorable. More on that in a moment.

First however, Merklynn steps forth after countless months? years? decades? to offer a challenge to the bravest of these warriors and a chance at gaining power to rule the planet. Both sides and many independent forces decide to give his contest a try. 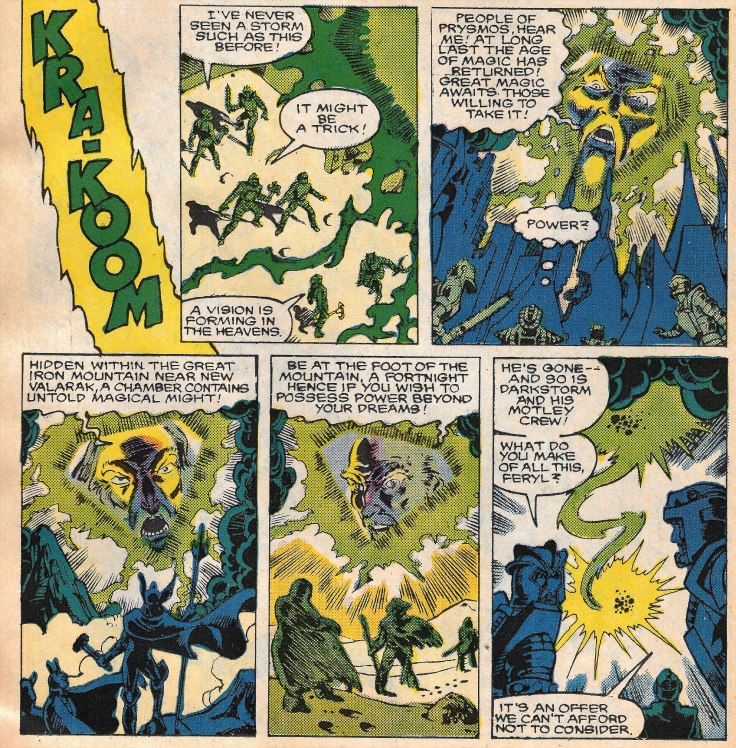 When the contestants gather at the mountain of Merklynn, the wizard appears on the side of cliff and tells them that whomever makes it to his private chamber gets a special prize. Which is the same thing a pedophilic uncle would tell you when you were in grade school. But these simpleton's fall for it. 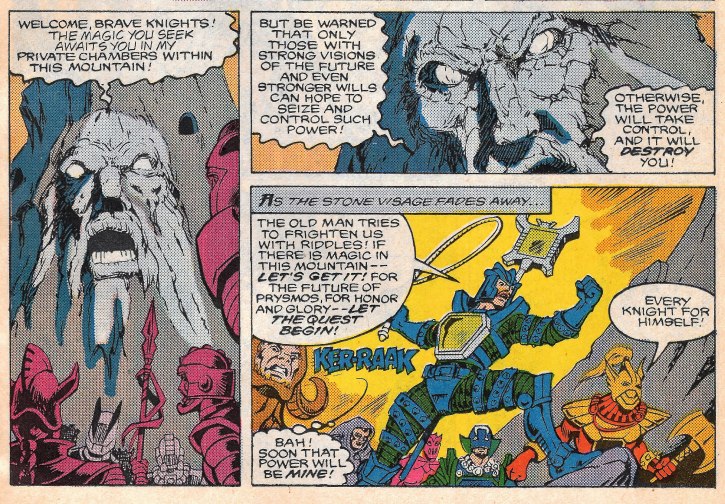 Which leads to trials that are kind of silly as the mountain abode stymie's attempts at penetrating its depths. 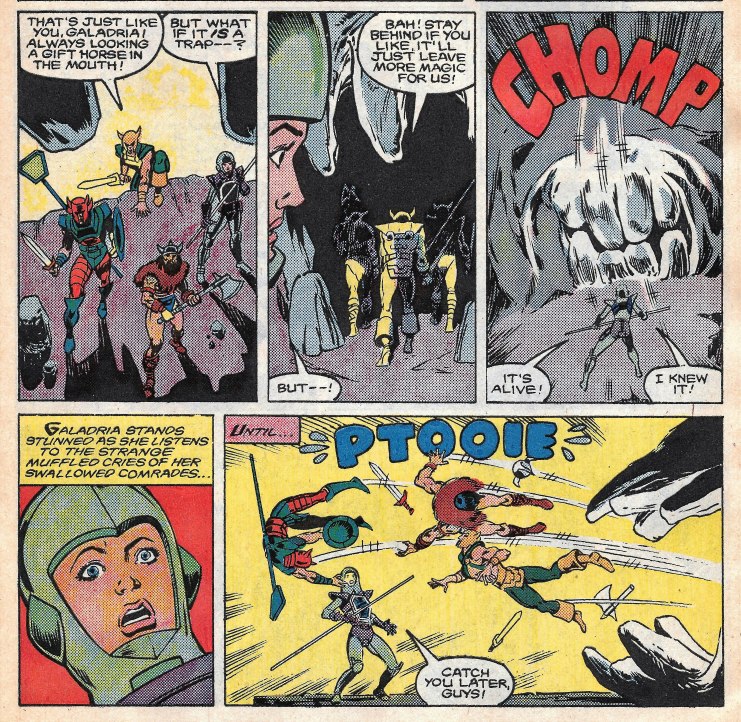 Many of these are slightly changed from the cartoon, such as this chamber where blades pop up out of the ground, walls and ceiling… 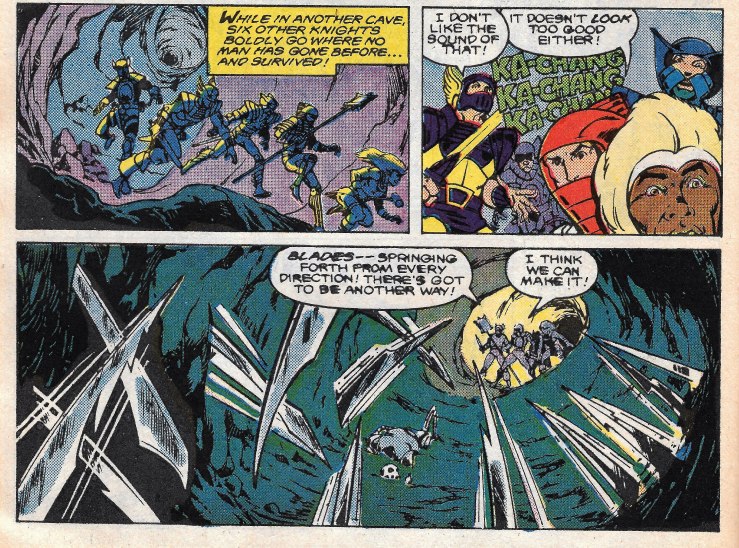 …is defeated by Witterquick by running real fast INSTEAD of it being a series of rapidly closing pistons he has to run really fast through.

Other sequences are lifted verbatim out of the cartoon. Like these sequences with the robe bridge and Darkstorm, Reekon and Mortdredd... 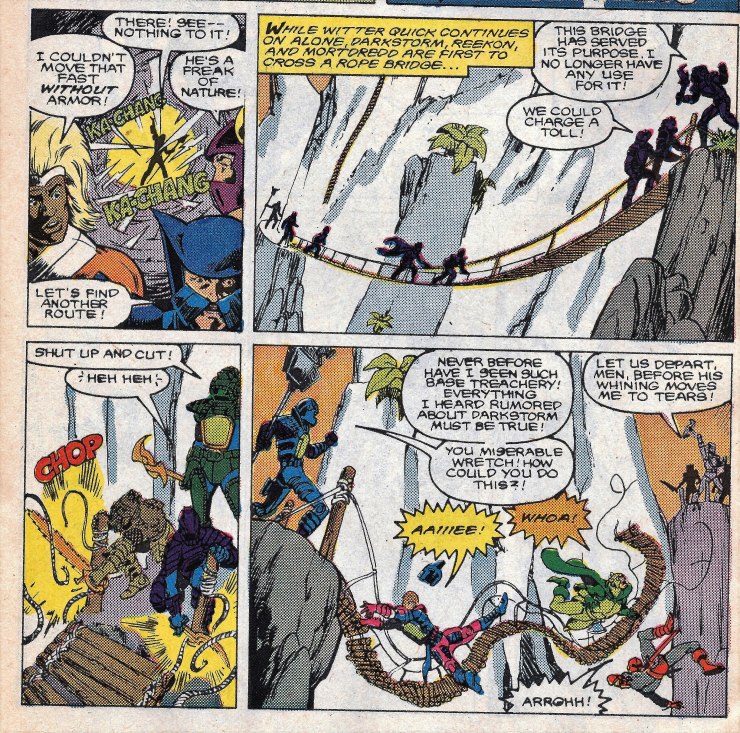 ...And this part where Arzon has to find a way to glide to another opening now that the rope bridge is gone… 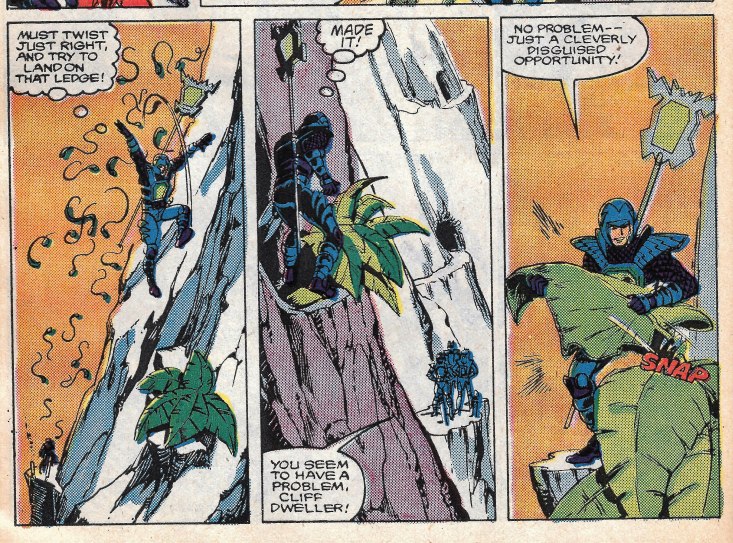 …which results in him using palm fronds as rudimentary wings. 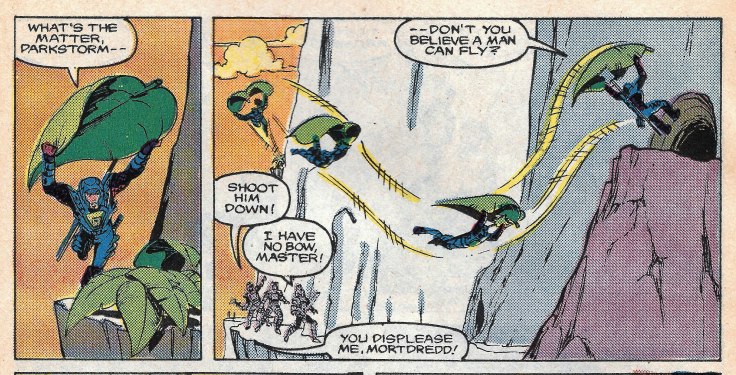 At first, it isn't really clear until the end why these sequences stay. Soon however, you realize that these "challenges" determine which "spirit animal" (for the toy-buying audience, that should read "cheap-looking 80's hologram sticker") each hero or villain receives on their chest plate. In fact that makes more sense as to why this book is so durned long. It has to shoehorn in segments of the cartoon that take a few seconds into pages and pages of panels that describe that action, leading to a bloated start to the series. Why it isn't spread over two issues, I can only surmise as it would not get the Visionaries their powers quick enough. And those marketing executives need those products to shine right out of the gate.

So we get Leoric fighting a giant cowardly, bullying statue,… 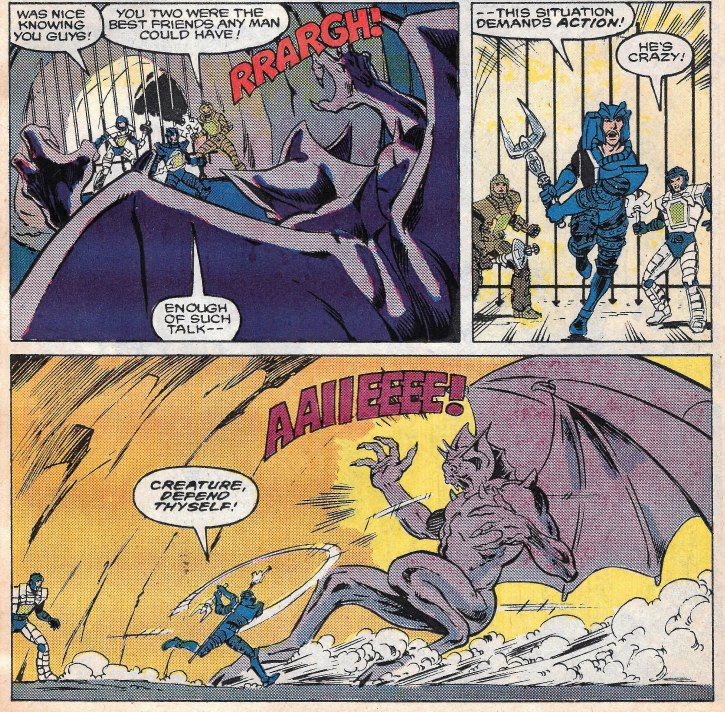 … Galadria and Virulina knocking themselves into the underwater lair of a goofy looking squid thing,… 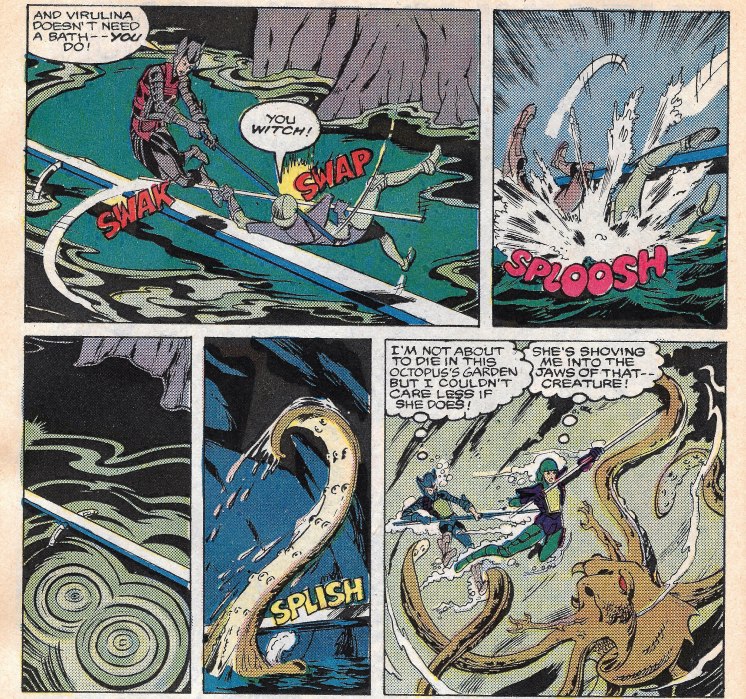 …and Cindarr facing off against Cryoteck in a chamber of ice. Each of these battles is lifted directly from the cartoon. 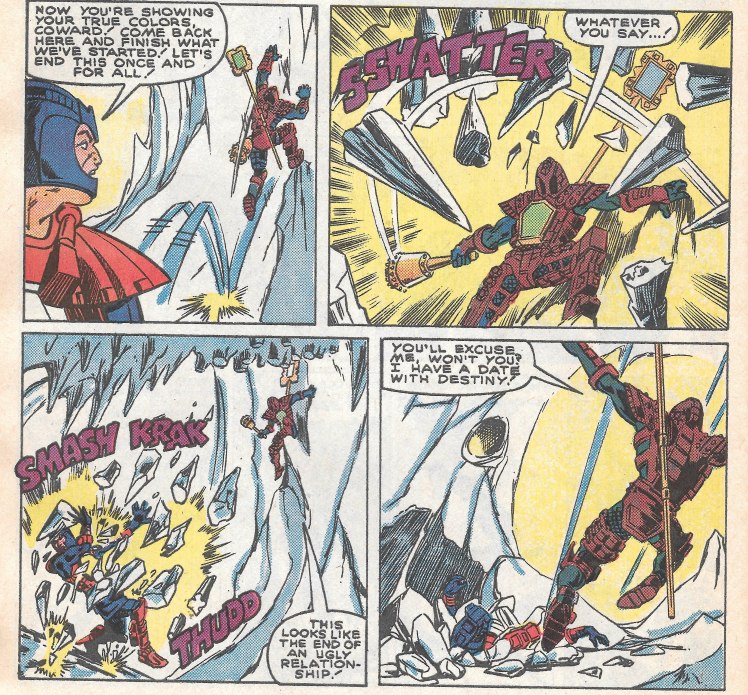 All so we can get all fourteen characters to have a character-defining moment before we move to a long-winded wrap-up by Merklynn that introduces the idea of the magical spirit animal chest hologram thingies and the stickers on their staves. But first a final CHALLENGE! 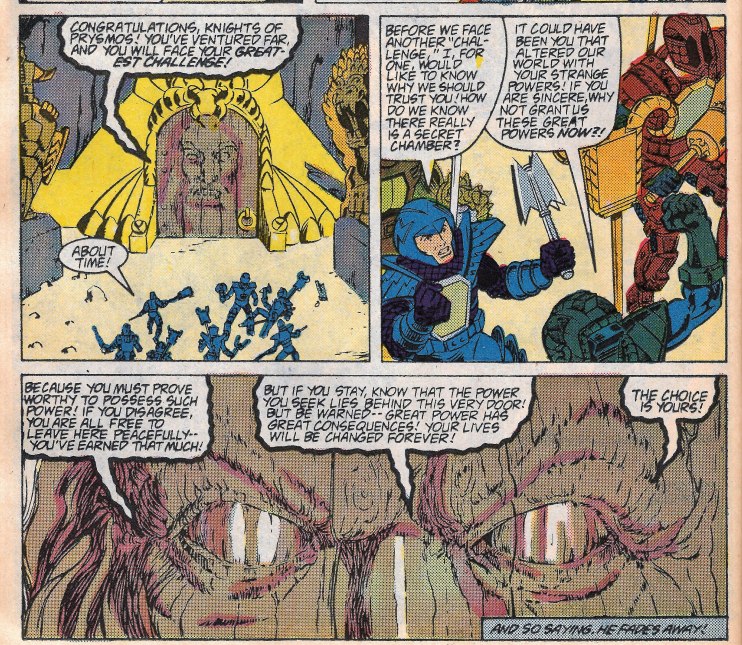 Which amounts to "Open this heavy door." Sheesh. 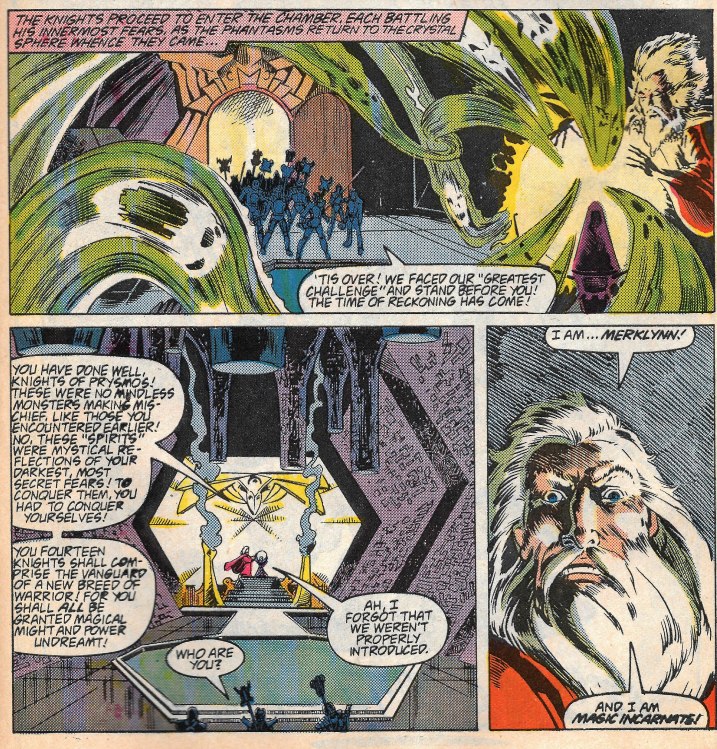 …and then it is stickers for everyone! This sounds just like my kid's preschool days. 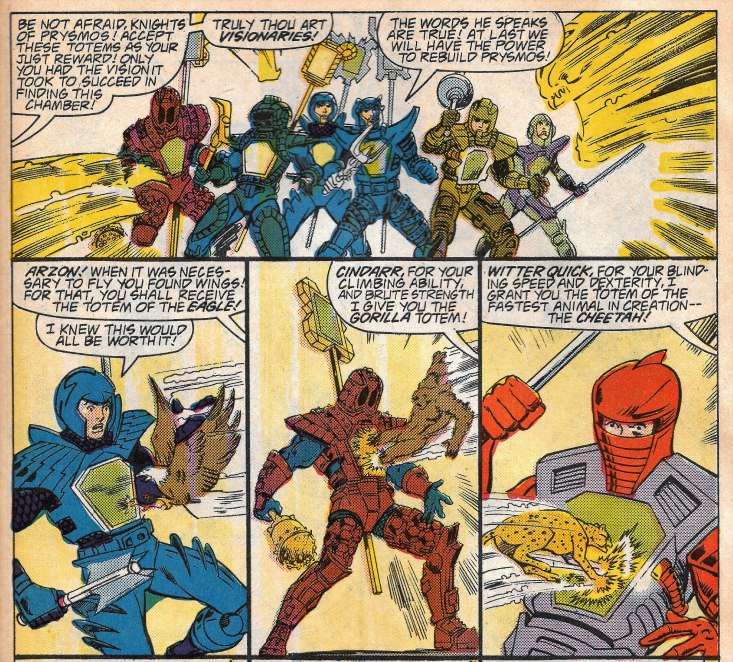 In all it wasn't a horrible read. The character models need A LOT of work though, as none of them stood out and if many were in panel at the same time, I couldn't bring myself to care which one was which. The series and possibly the action figure lineup could have been done a great service by trimming the product line down by half.

As for the toys themselves: they were released after the series aired and lasted longer than the 13 weeks it was on. It was deemed not very successful, perhaps owing some of that to the fact that the technique for producing the holographic images was quite expensive at the time. A second series of figures never materialized. In a very short-sighted move, the two female figures were never even released due to Hasbro feeling dubious at their sales potential. Additional pressure was applied by Tonka figures using the same gimmick called the Supernaturals being released at the same time.

There are a couple more of these in the crapbox, which is odd given that the book only lasted six issues (meaning I have half its print run). I'll get back to them sometime soon.

Enjoy your Christmas morning everyone. See you soon with Part 2 of that Harley Quinn Holiday Special.
Posted by SonOfCthulhu at 5:07 AM