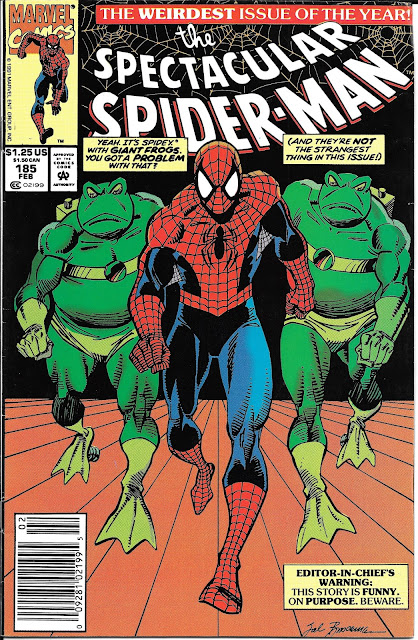 Jibes about "I am the Walrus" and "White Rabbit" aside, this is what you get when you allow a masterful storyteller to combine with a wonderful artist.

Oh I know this is part of the "Badder Bad Guys" section of the Crapbox, but in this one instance the title is self-assigned. Just look at that cover blurb.

"Another Fine Mess", scripted by none other than Justice League funny-man J.M. DeMatteis, follows Spider-Man in a tale that is a complete hoot as ole web-head deals with a would-be superhero by the name of Eugene Patilio. Eugene is the son of Vincent Patilio, a retired supervillain who went by the moniker Leap-Frog. Eugene has acquired a souped up version of his Father's suit and taken to calling himself…well, I wouldn't want to spoil the introduction to our tale. 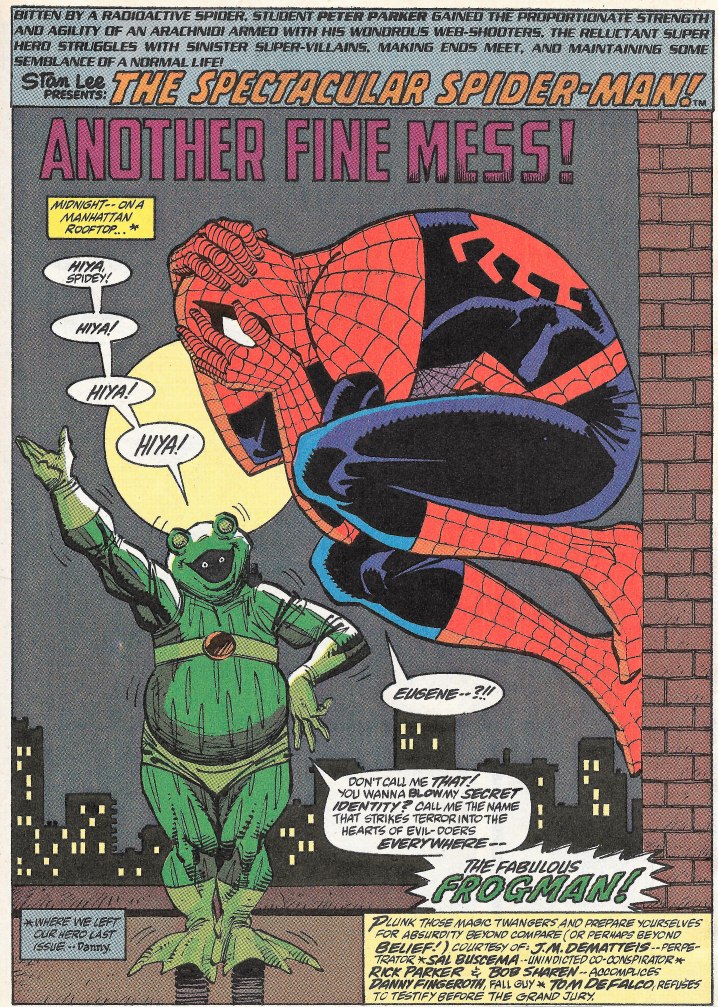 Would you believe me if I said a guy in a giant frog suit wasn't the weirdest thing in this issue? No? Okay, then. You've been warned at least.

Eugene wants to be a hero in the most earnest way possible. He's not in it for glory, but you feel he is guileless and just wants to help. DeMatteis has stated that Frogman is one of his all-time favorite characters to write and it is clear he has a lot of fun with him.

Who doesn't have fun with Frogman/Eugene is Spider-man, who tries to discourage the young man from following in his footsteps. A summation of their exploits together might shed some light on why he feels that way. The newly minted Frogman has had run-ins with Spidey before, and those ended with Spidey pulling his fat out of the frying pan.

Not to mention, in "Spectaular" at this time has Parker currently  struggling with friend Harry Osborn taking a turn for the worse by donning the mask and outfit vacated by his father. So Spidey is dealing with finding his friend suddenly becoming an insane version of the Green Goblin.

Spider-man has no time to deal with Eugene. 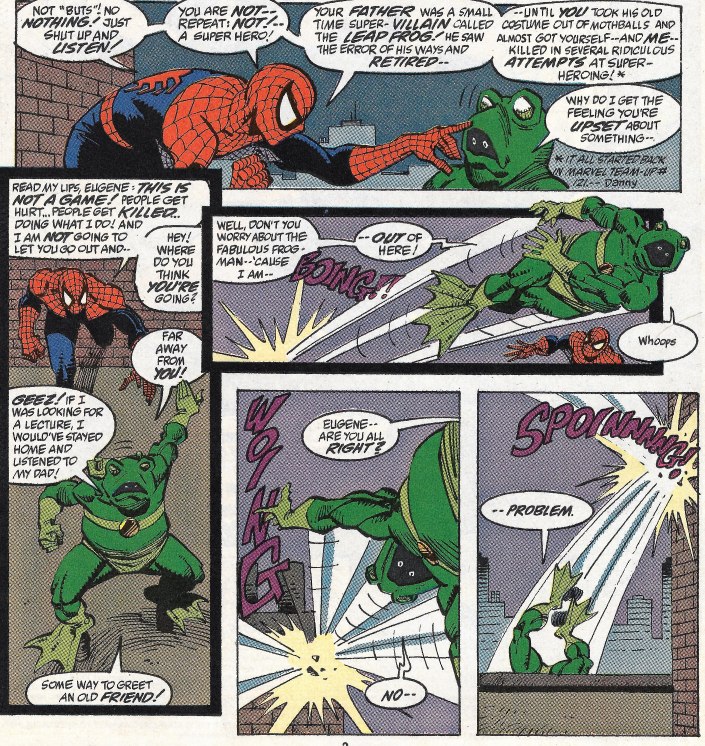 Yeah, Spider-man will have to save Frogman from going splat.

Art chores are submitted by the ever-present Sal Buscema doing work on both pencils and inks. There is lots to love about his panels here, specifically because his inks tend to be very minimalist. The style and tone put me in mind of Walt Simonson's work and I'm not quite sure if that's because Sal worked with him on his Thor run or if there isn't some genuine commonality between the two's art. It is a question we can ponder at a later time. Spidey has a Frog to save!

The neat reversal of years of Spidey comics (being that we have Parker in the mature, adult role and a new kid in the role of "starting superhero") isn't lost on me. And the art and scripting have so grabbed ahold by where we are here on page three that I've just let go of the handlebars and begun coasting enjoyably to the end of this tale.

But before I take off down the hill, let's have the reason for this issue's inclusion in the ranks of Bad-Guys-that-are-just-plain-bad drop in on us: 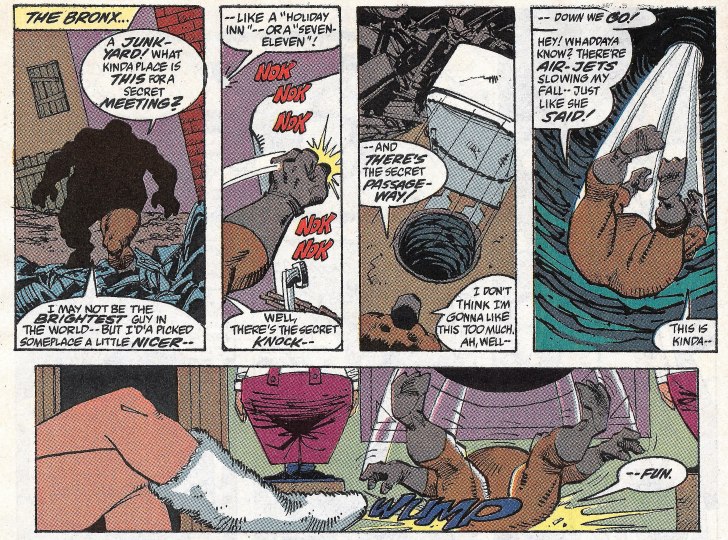 Ladies and gentlemen, I present to you The Walrus.
Cab driver Hubert Carpenter (in a clever aside to Lewis Carroll, obviously) underwent a mysterious experimental process created by his Uncle to endow himself with the Walrus powers way back in a DeMatteis scripted Defenders #131. Eugene was along for the ride on that outing too, which concluded in an ignominious end for our tusked friend. Right now he's back in town with a plan for a comeuppance.

And that plan involves the woman who will be his new partner, this little lady… 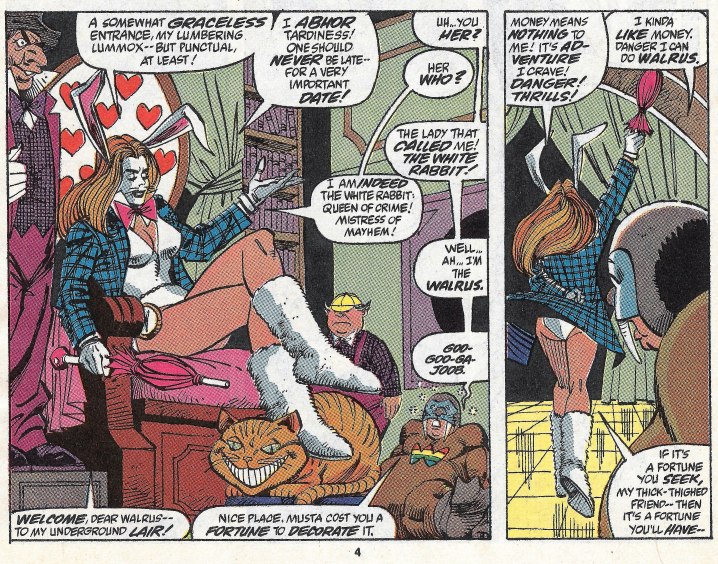 The White Rabbit! Not to be confused by the villainess found in DC's early Steel series. No, she's way more kooky…and crazy.

On the surface she appears to be nothing more than a knock-off Penguin. And not even the murderous Penguin from DC's late 80-90's, but the earlier 60-70's era Penguin where he was little more than a prop umbrella and a waddle. 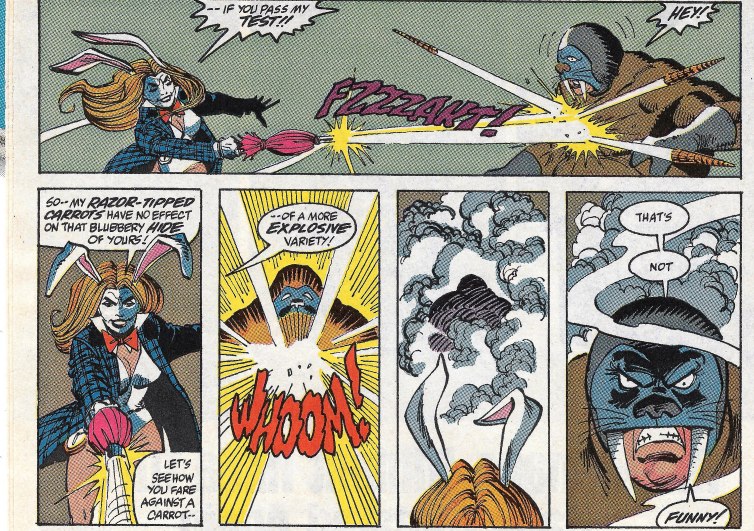 As she blasts the Walrus right in his rainbow-hued logo, I begin to admit that she seems a tad bit MORE insane than the Penguin ever was. However she stinks of the odor of dangerous and crazy thrillseeker not that of serious threat at this point.

And besides, she fits our Alice in Wonderland theme, so just go with it.

The above abrupt disregard for safety appears to start things off on the wrong foot with our tusked-but-slow-witted friend.

She quickly turns things around. And so witness the christening of a new group to rival the Sinister Six or the Frightful Four… 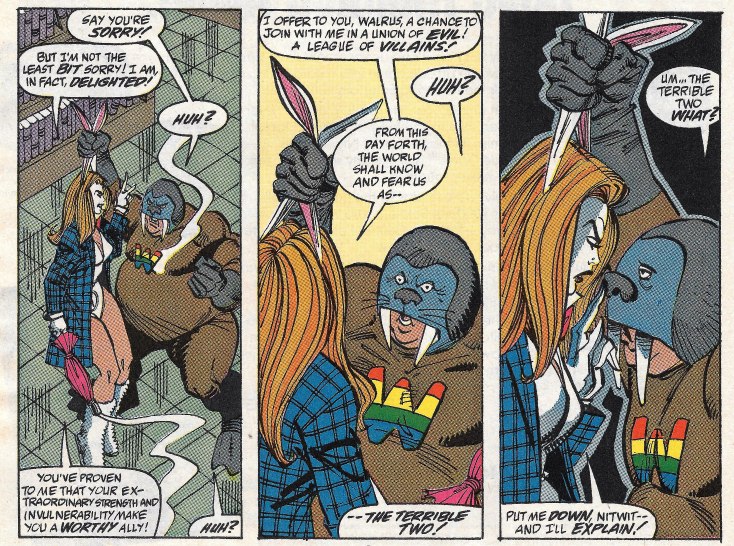 Uh, yeah. That's pretty awful. No supergroup has ever been confused with what you call a troublesome toddler before.

As for her explanation? It will have to wait for a bit as the story takes another turn.

I do have to stop and ask: Come on, surely these two are no match for Spider-Man? I mean, he could web them both up in one swing-by. If ever there was a lopsided battle card, this one would be it. And speaking of Spider-Man, Parker and Mary Jane have a little convo about his alter-ego bumping into Eugene… 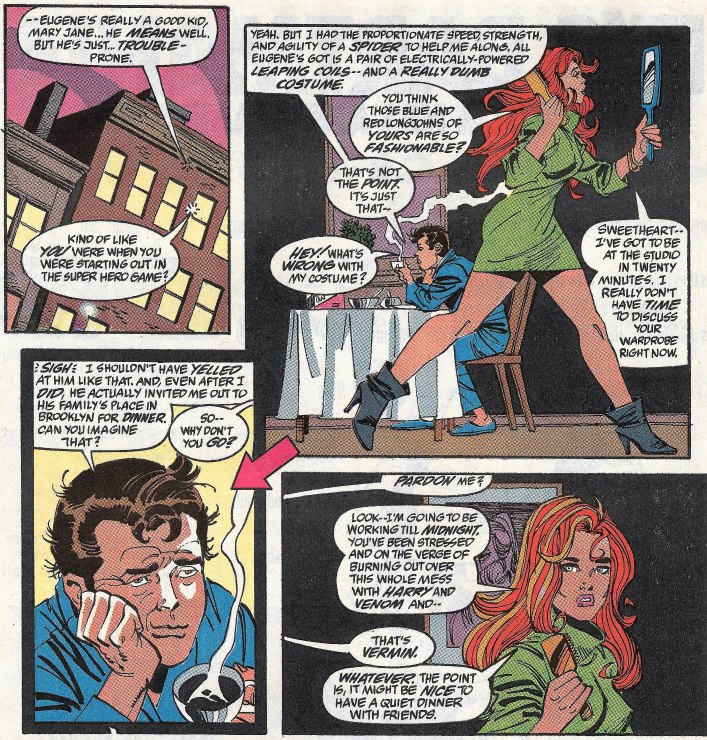 Mary Jane is so much the supportive girlfriend here, ending up forcing Peter to RSVP at Eugene's for dinner.

Parker relents after saying it would be nice to see Eugene's Dad, the original Leap-Frog, who reminds him very much of his own Uncle Ben. 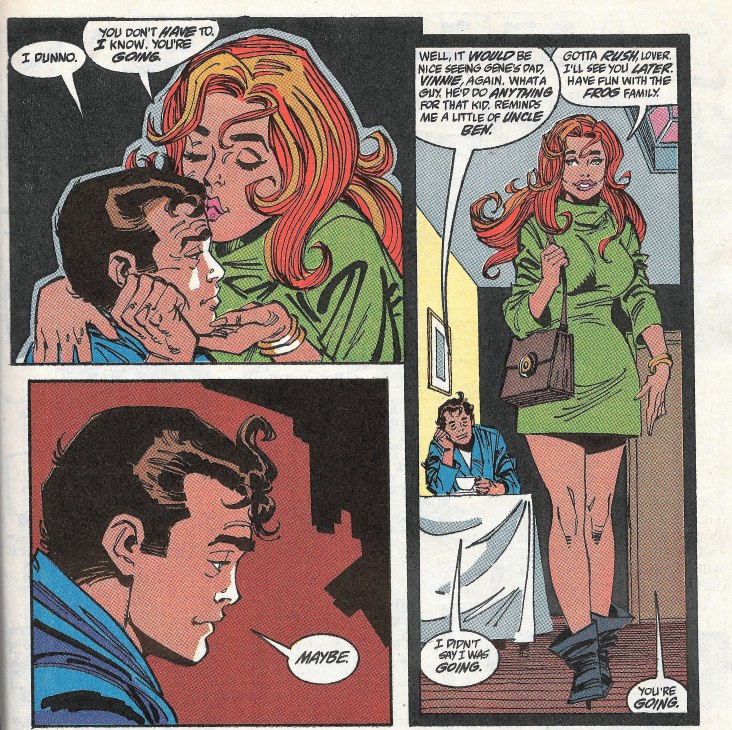 Have to take a moment out here and just say AGAIN that DeMatteis and Buscema pair so well in this tale. Parker's frazzled look, the comedic poses/lines upon the Frogman encounter contrasted to Spider-Man's own iconic look/barbs, and a story that allows all of these elements to shine…

I don't read Spider-Man books currently, but the crapbox spits them out occasionally. Dan Slott is about the only writer I've seen who has crafted stories on par with this issue from the current crop of Spider-scribes. Unless the ones my random sampling come across are wrong, it is a damn shame too. Spidey deserves a writer in tune with all the elements of the character, including the absurd nature of his powers and a true understanding of his backstory and cast.

And the ability to mix in a little humor now and again.

Anyway, his attendance is settled by MJ.

Eugene excitedly tells his Aunt Marie and his Pop to expect a Spider for dinner. It goes over in this amazing kind of "slice of Italian homelife" way. Love the parallels that are setup between Peter's upbringing and Eugene's as well. Such a fun story. 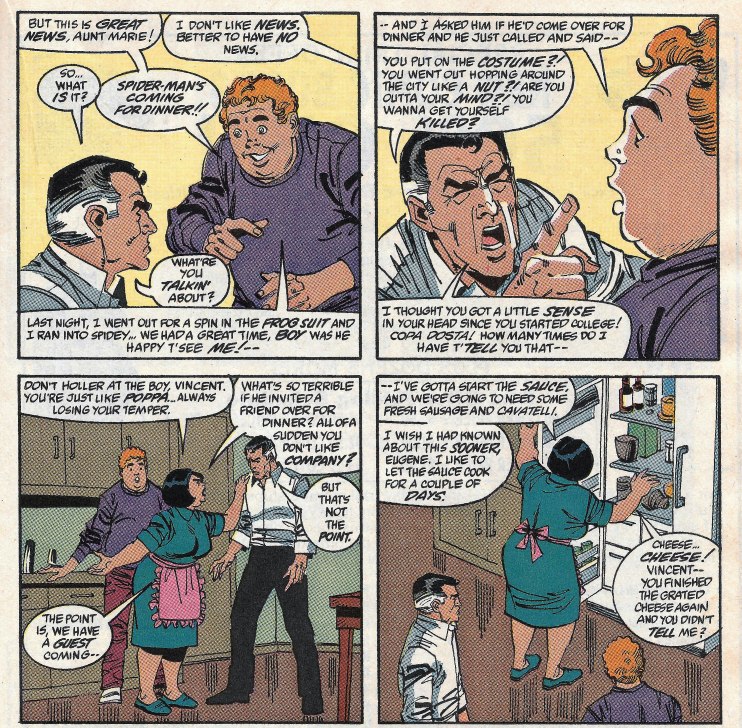 And it only gets better as Peter arrives as Spider-Man. 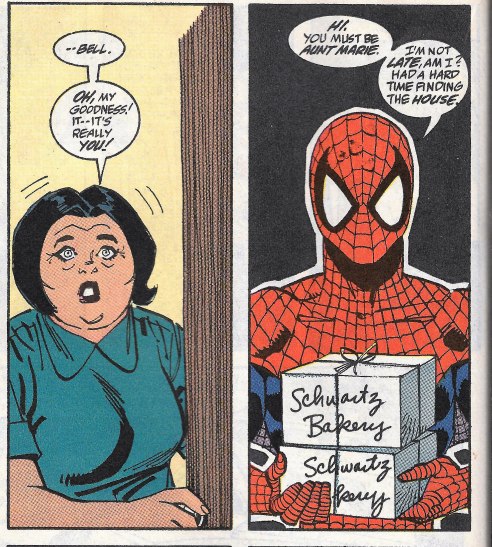 I have to admit that this "Spider-Man comes to dinner' storyline has some of the best payoffs I've ever seen. 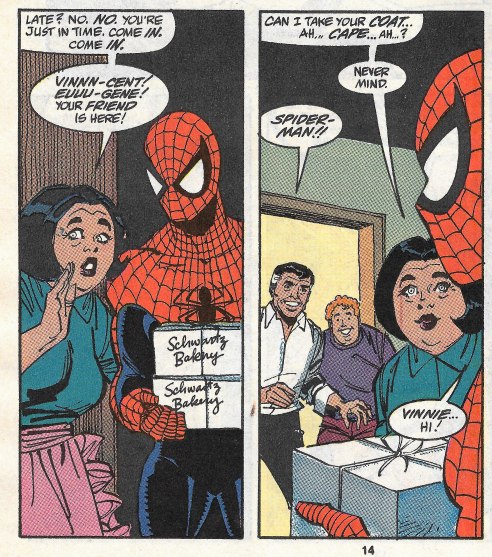 …to the "shop talk" about superhero biz… 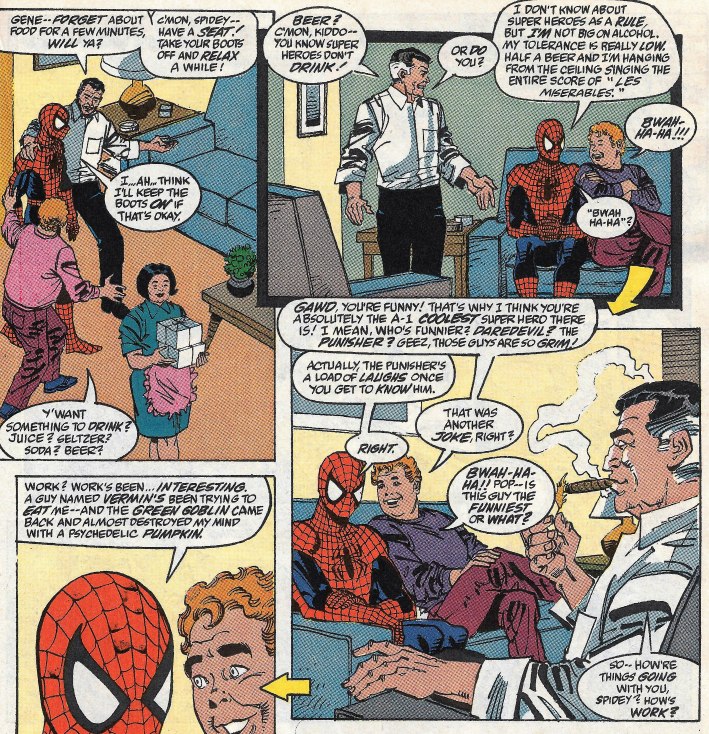 …right up to this part where we have an awkward moment that shifts us to more mundane topics.

All of this is such a credit to DeMatteis' scripting. So, so good!

But back to our Badder-Bad Guys: the White Rabbit drives her Rabbit car (yes, this is the 1960s again) into Frogman's territory while explaining her evil scheme. An evil scheme that even the Walrus can tell is quite idiotic. 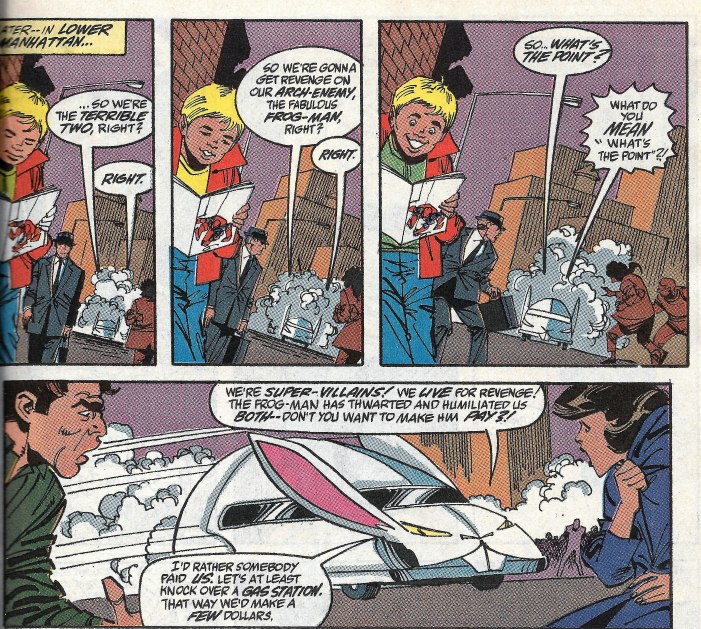 And as the White Rabbit starts making a ruckus, her tubby companion has even more doubts. 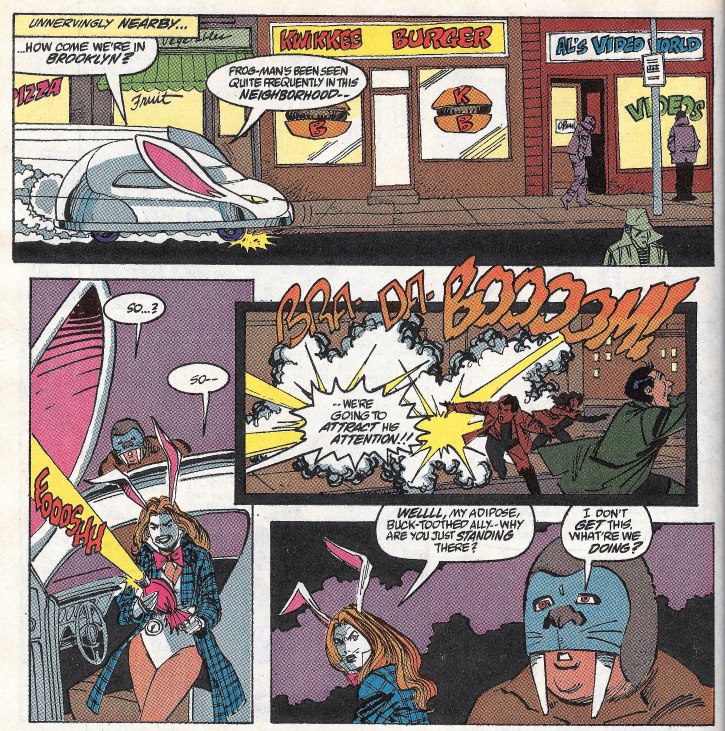 For a dumb guy, the Walrus asks some pretty smart questions. 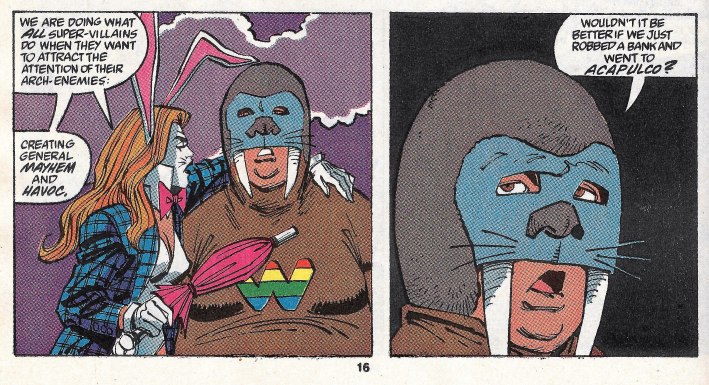 Unfortunately, he's not bright enough to answer his own query and give up being half of this duo of dumbness. Instead he pitches in and starts tossing around lampposts. 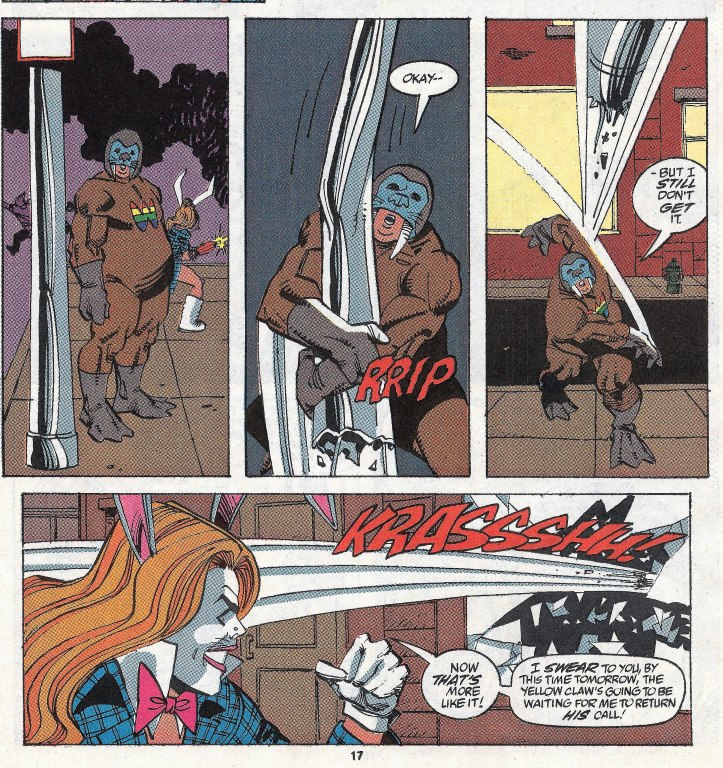 All this brings out the news media which gets their actions broadcast on TV, which happens to be on in the Patilio living room.... 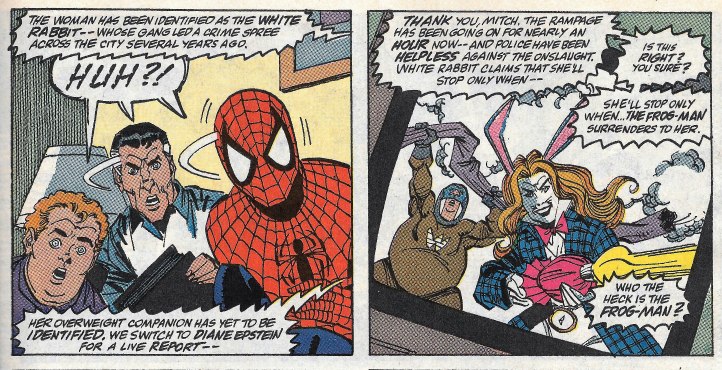 Which in turn DOES actually work according to the White Rabbit's plan, drawing out Frogman…but not before Spider-Man ducks out on his hosts to tackle them alone. Unfortunately for the White Rabbit she's bitten off way more carrot than she can chew. 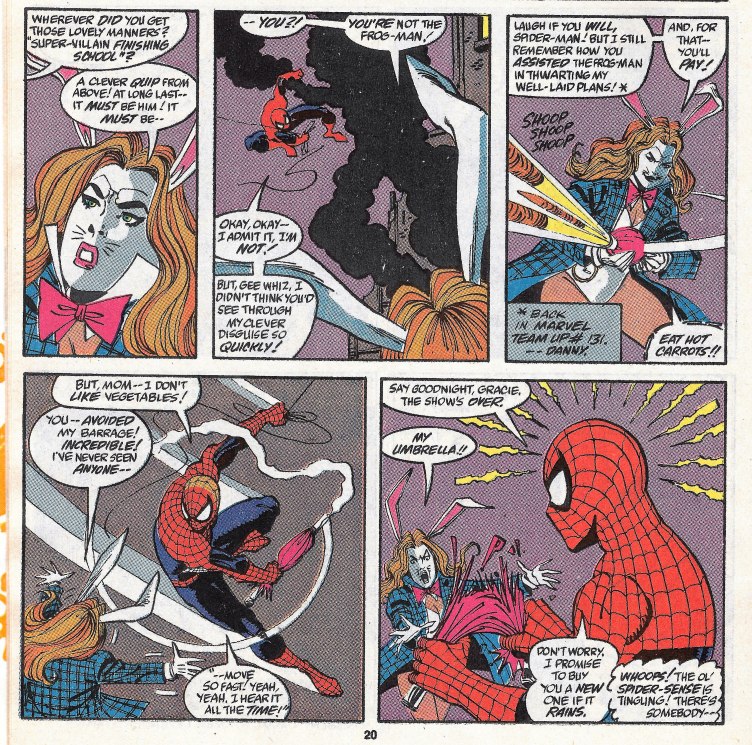 But before the Terrible Two can move on to the order of frog legs, there's a little matter of a spider-appetizer they will have to deal with. Parker starts by disarming White Rabbit of her carrot ammoed pea-shooter… 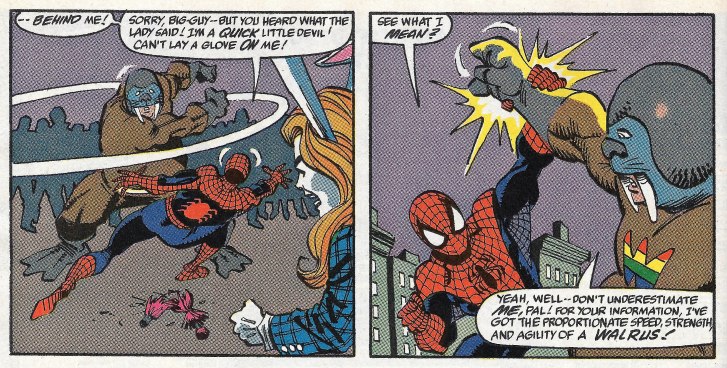 …but gets a bit distracted fighting the Walrus. 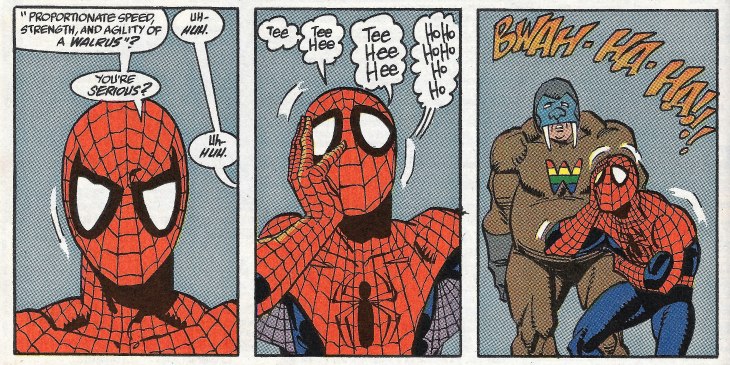 With a line like that, is it any wonder? I mean strength I kind of get. Those blubber-packed tusk monsters look to be horribly massive and you figure they've got to have muscles to move all that bulk. But fast? In the water, maybe. On dry land, those beasties barely chalk up a waddle.

Lucky for Spidey help is on the way. After a humorous intro, that is. 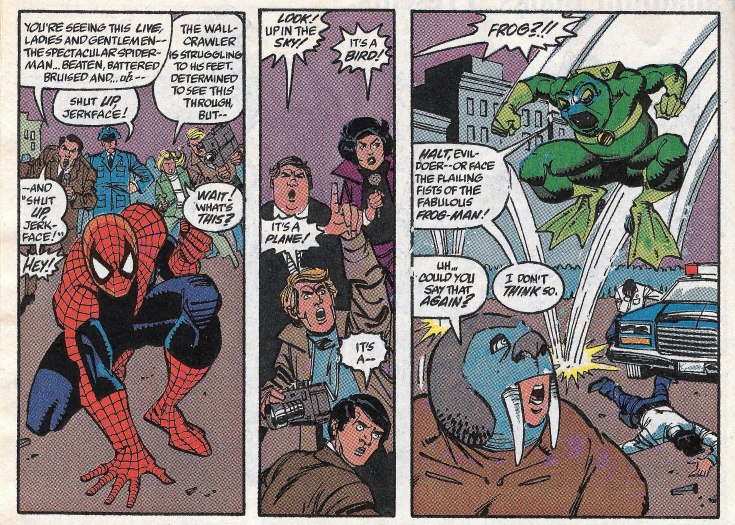 I'm all mile-wide grin at this point. So Eugene takes on Walrus and it is glorious. 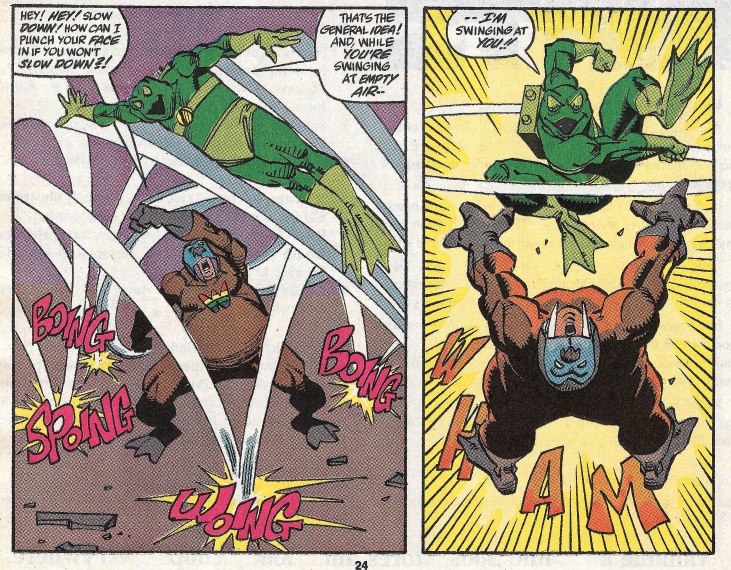 That final panel is almost cover-worthy. With all the work done to endear us to Frogman, there is a bit of emotional resonance to it as well. Goes to show that even the silliest concepts can bring you to your feet if presented in an enjoyable way.

The battle is not over yet! Appears the White Rabbit has a backup umbrella and still harbors a mad-on for Frogman. Eugene over-hops and loses control, making himself a sitting duck.

Fear not! All isn't lost. Before Spidey can swing into action, a second Frogman appears. Although this one is barely in control of his powers. 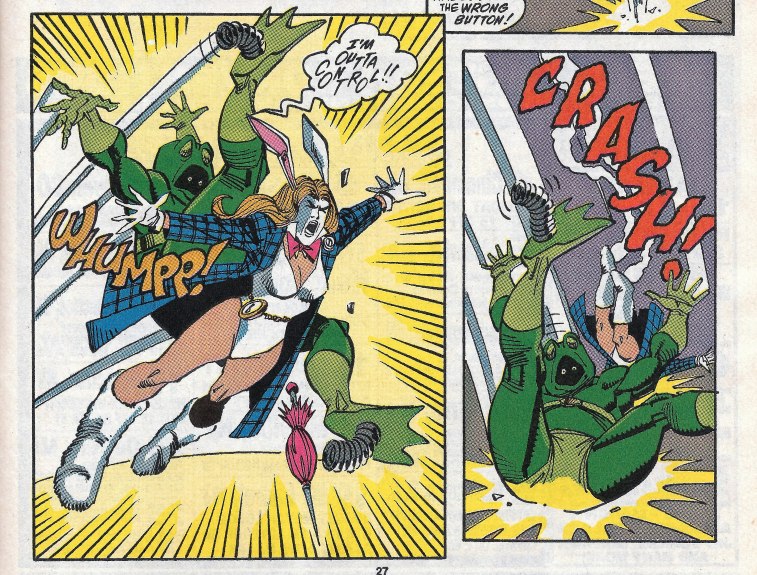 It doesn't take much to knock White Rabbit off course. When Spider-man looks confused, the first Frogman reveals himself to be none other than Vinnie. He upgraded his original frog-suit and beat Eugene in arriving. The second Frogman is Eugene, of course, still working the kinks out of his jump boots, but still enough in control to take down the woman trying to kill his Pops. 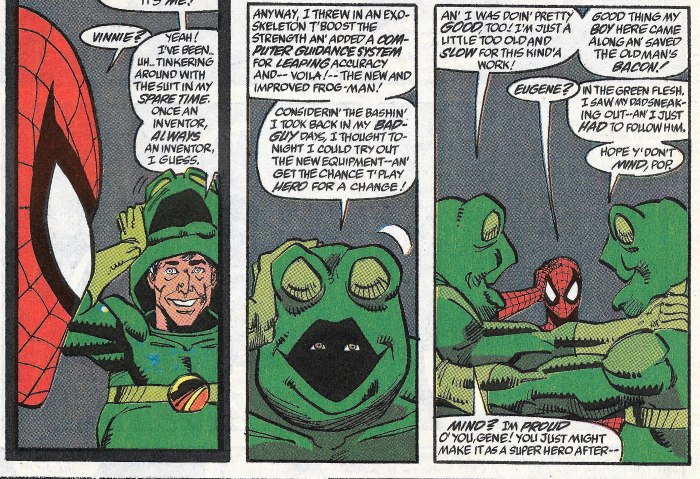 And we'd wrap up things right there, except someone in the Bullpin must have realized that Spidey hadn't gotten any licks in all issue, so they kindly woke up the Walrus and pointed him in the Frogmen's direction. 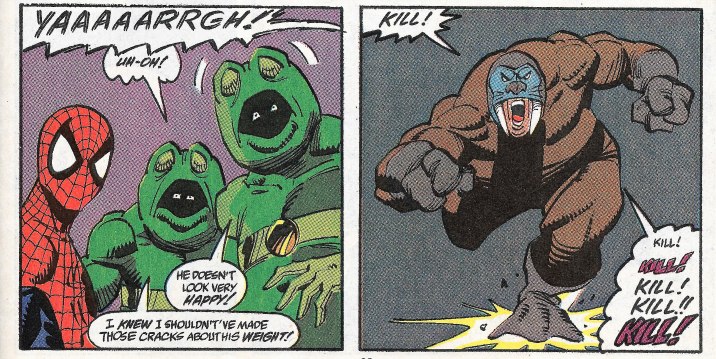 But one flick of a Spider-enhanced finger muscle and he's back down again. 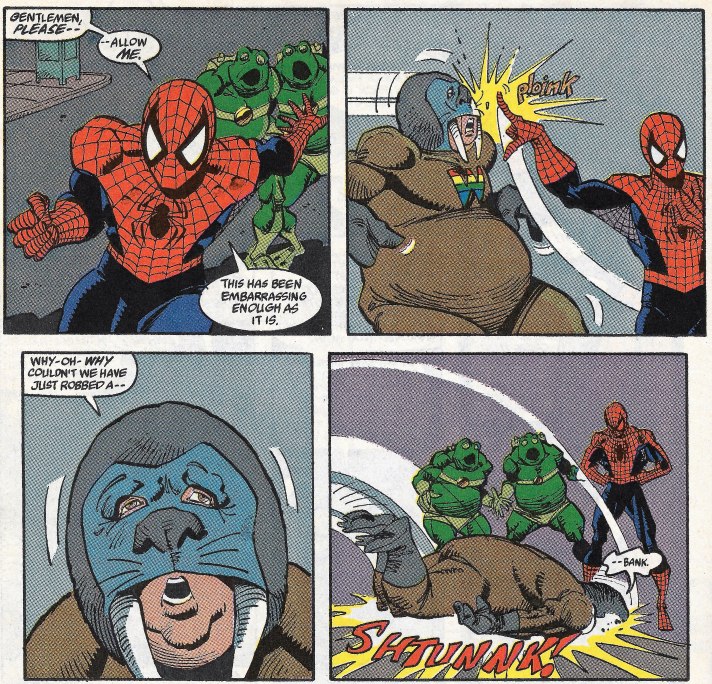 This was such a great find! Humor AND Heart AND Heroics. The Spectacular title may not have received as much notice as Amazing, but I've enjoyed the 70's and 80's version of the title whenever it crossed my path. Maybe someday the Crapbox will come across my first encounter with it, a book that featured the greatness of the Hypno-Hustler. Until then, hop on down to the back issue bins and see if you can score a few.

You'll be glad you did.

Posted by SonOfCthulhu at 8:20 PM