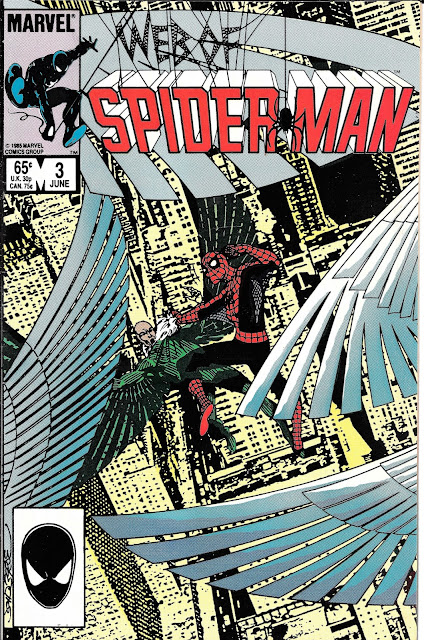 A story about with the villain of the new movie

The Vulture. The big-bad villain of Spider-Man Homecoming. Finally.

What we have here is a tale from the single digits of the Web of Spider-Man title told astutely by Louise, wife of Walt, Simonson. The more stories by Mrs. Simonson that I find, the more my frustration with her X-Factor run devolves into forgiveness. This is a GOOD Spider-Man story and a spot on Vulture tale.

Speaking of the Vuture, the comics version of the character had some divergences from Michael Keaton’s in the movie. For one thing, the Vulture worked alone and he was never too concerned with anyone but himself. To my limited knowledge, he didn’t have a family and certainly not the family the movie gives him. He was a petty thief who thought highly of himself, and he didn’t require a tinkerer to create his wings. Toomes did his own special effects. And he was quite protective of that technology.

I tell you all this to put you in the proper frame of reference for the story that follows. We begin our Spider-saga with Toomes in jail. 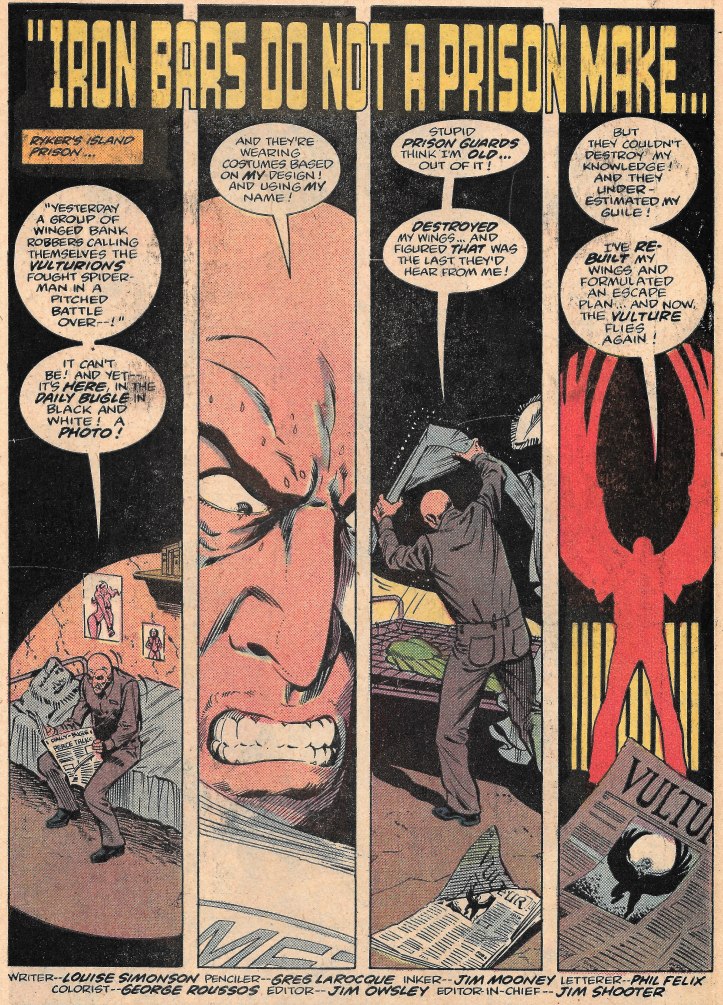 …but shortly to be out of his own recognizance. Appears he’s a bit miffed at four other people who’ve stolen his designs for flight wings. These criminals dubbed themselves the Vulturions and they mean bad news for Spidey.

Appears Toomes and Parker might be on the same side for once? We’ll see. 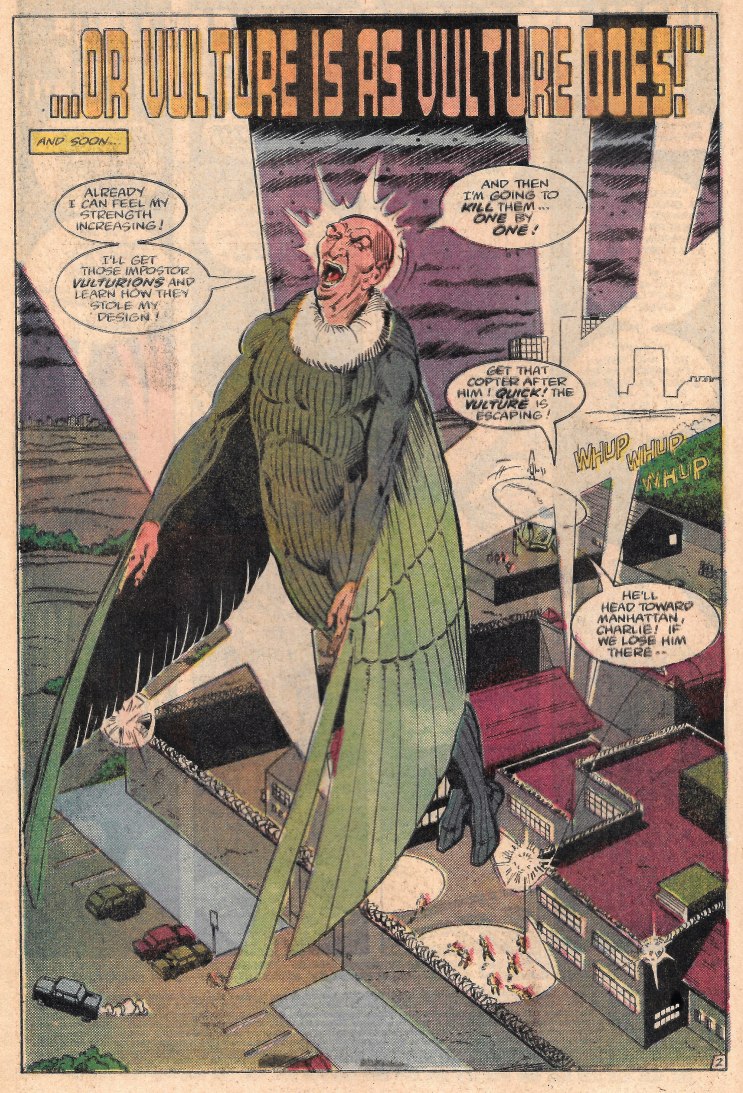 I mean except for that “killing them all” part.

The Vulture must evade this police helicopter first, something easily achieved via quick dash down a subway tunnel. 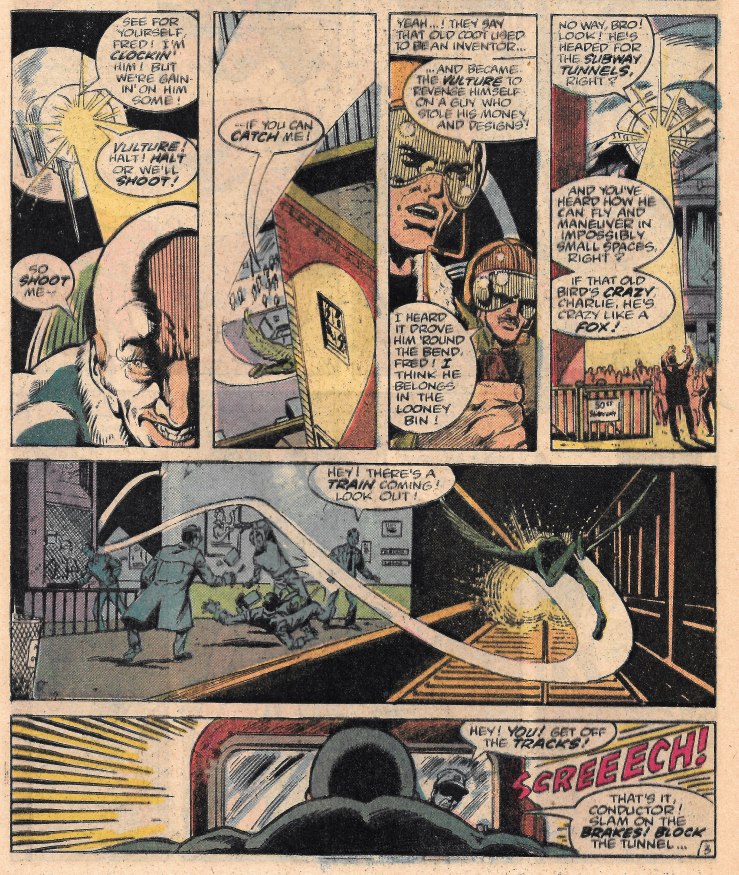 We catch Spidey saving a woman’s belongings from two purse snatchers who find themselves all webbed up instead of getting away with the woman’s loot. All in a day’s work for Spider-Man, however his mission this evening also includes delivering a birthday present to the local post office for Aunt May’s birthday. I find myself wondering if it was bought at Sanger Harris. 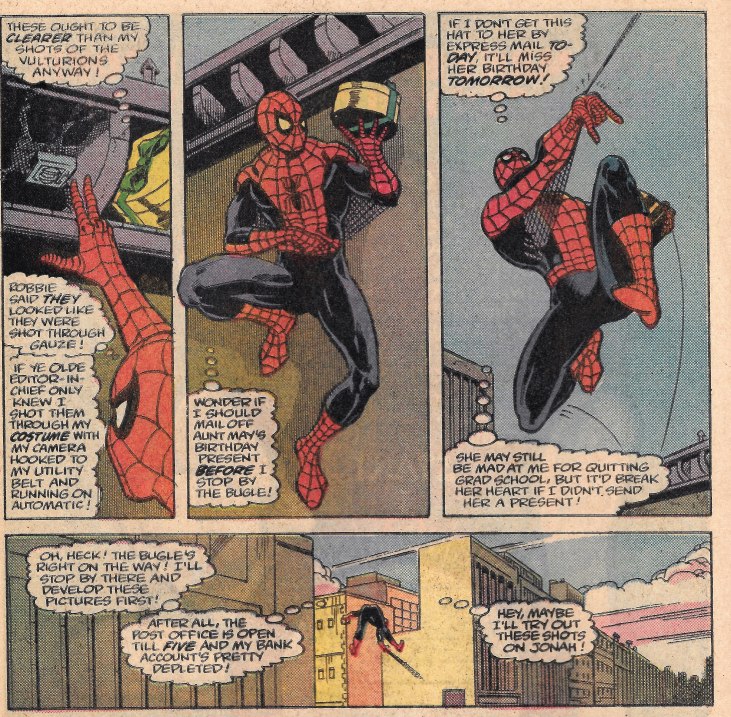 May’s attitude toward Peter took a bit hit recently due to his decision to drop out of grad school. Peter also finds himself light in the pocketbook area, so he decides to swing by the Daily Bugle to see if Jolly old Jonah would be some snapshots of Spider-Man fighting the Vulturions.
As always happens in these kinds of stories, the object of both Parker and Toomes search strikes a jewelry store at that exact moment. If only someone were there to stop them… 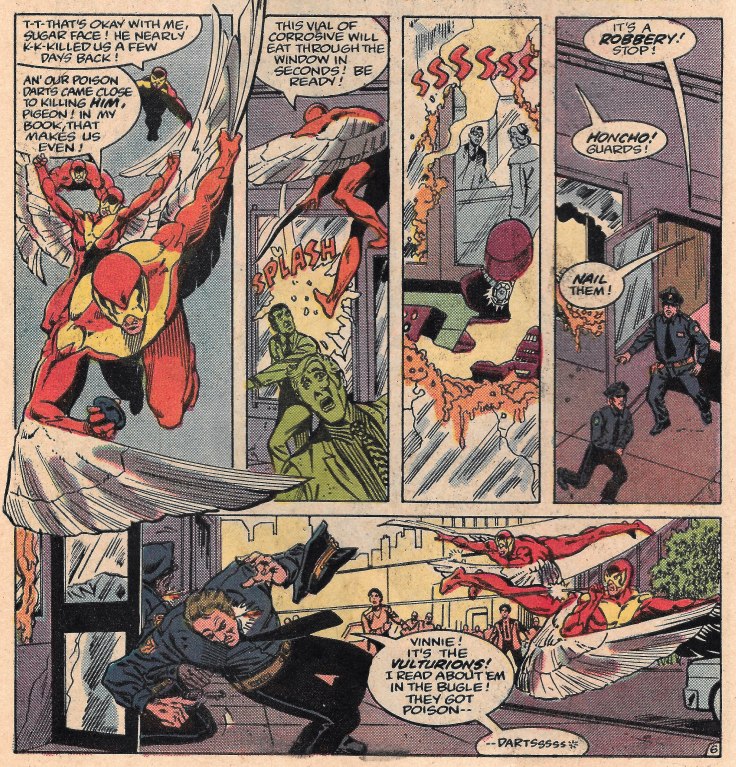 But this time there isn't and the quartet make off with their ill-gotten gains. 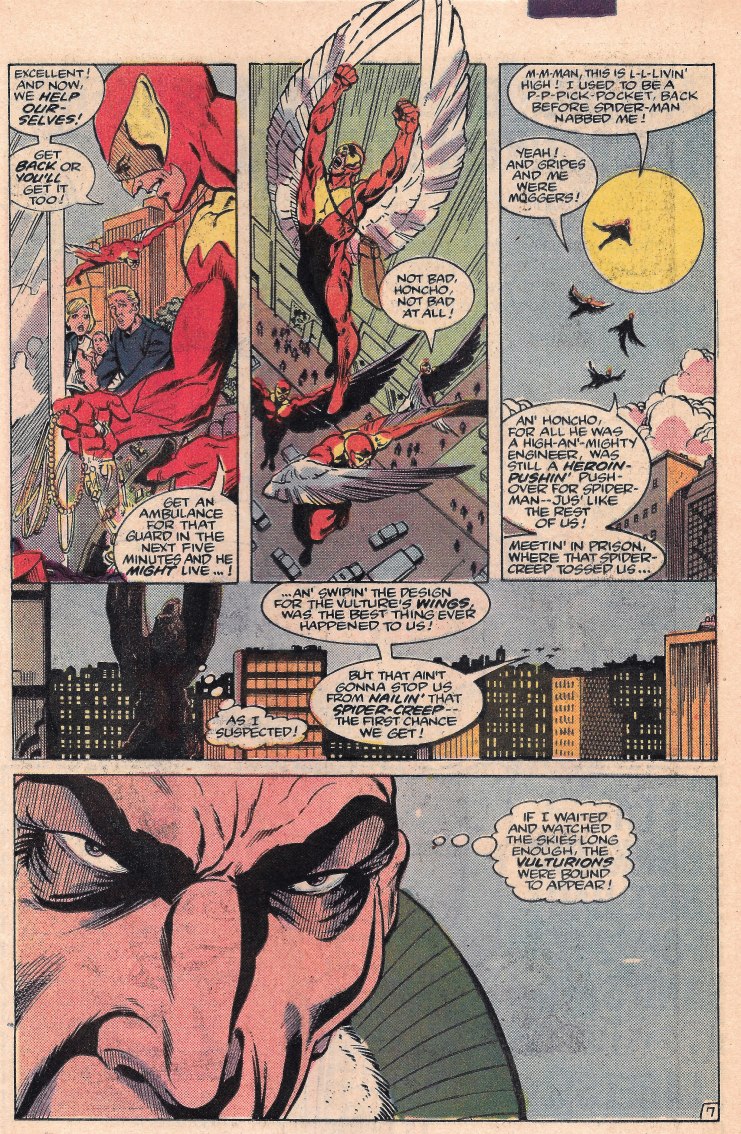 Love the wings in the upper panel extending to the edge of the page. Good call on the art for this issue. OH, and it looks like Toomes caught their scent.
As two of his enemies look to have a grudge match in the sky, Peter and Johan do the same dance they’ve done in countless issues of Spider-Man comics. Mary Jane pulls Parker to an unexpected lunch date, one that might cost Peter the time he needs to mail that package… 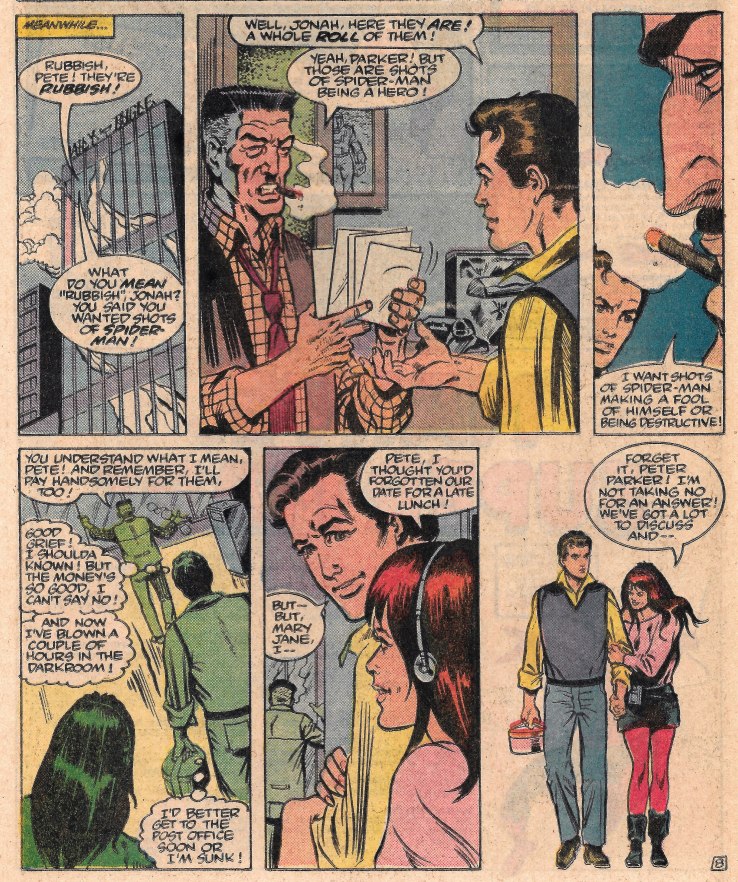 As Mary Jane relays the message coming over her Sony Walkman about the Vulture’s escape, Peter spills his beans about being in hot water with Aunt May. While they dine, Toomes takes on the Vulturions. 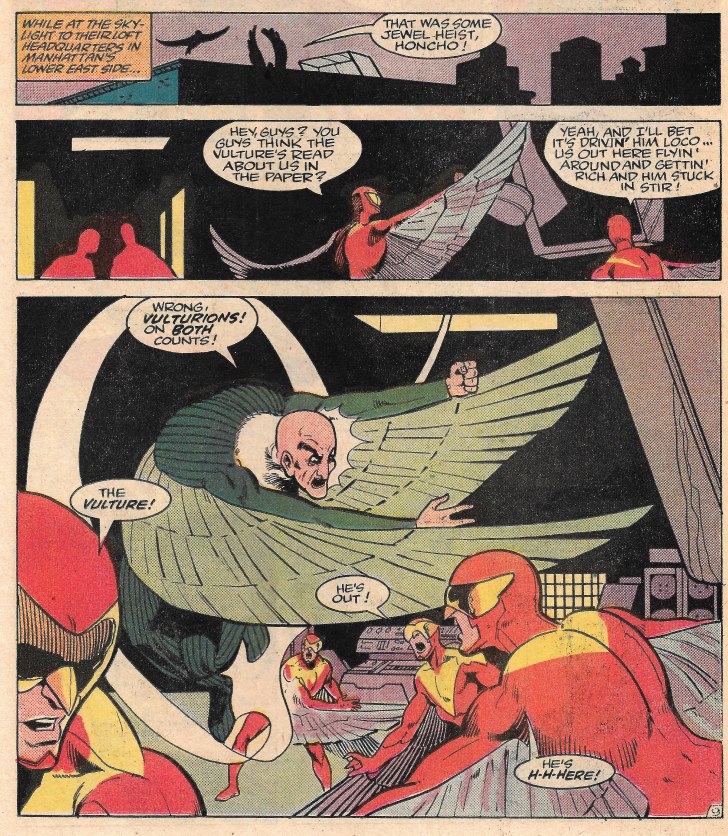 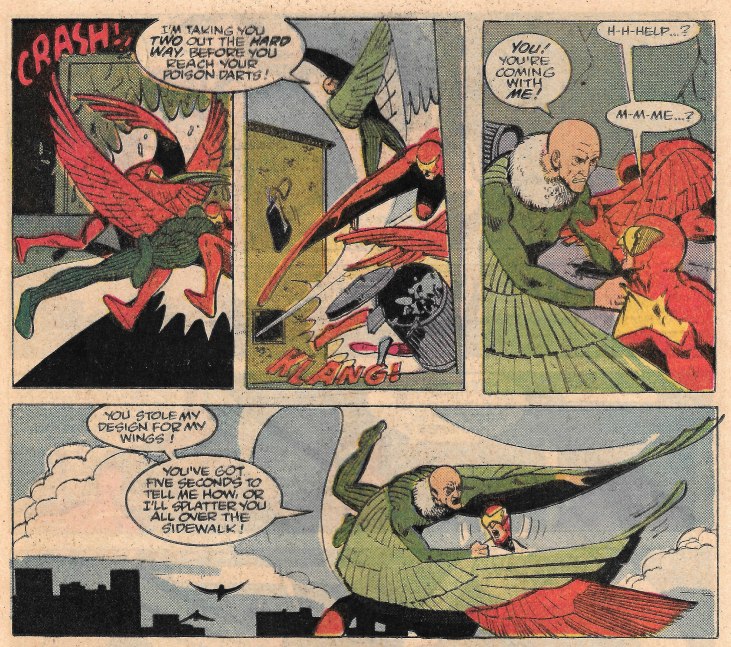 MJ and Peter’s talk gets down to exactly why Aunt May might be so upset with him. Some of those same themes play out that have been staples of Spider-Man stories since Lee invented the characters. Things like power and responsiblity, plus other things like the need for secrets that separate Peter from those he loves. MJ makes some breakthroughs with Peter at this point… 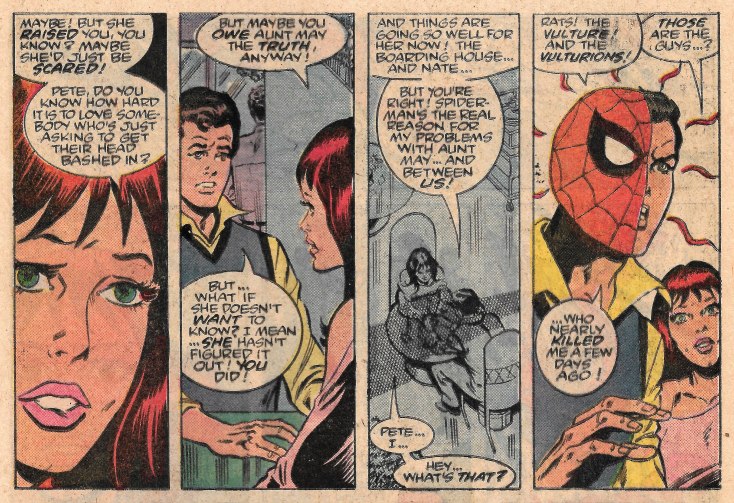 At least until the battle spills out into the sky above Peter and MJ’s lunch. 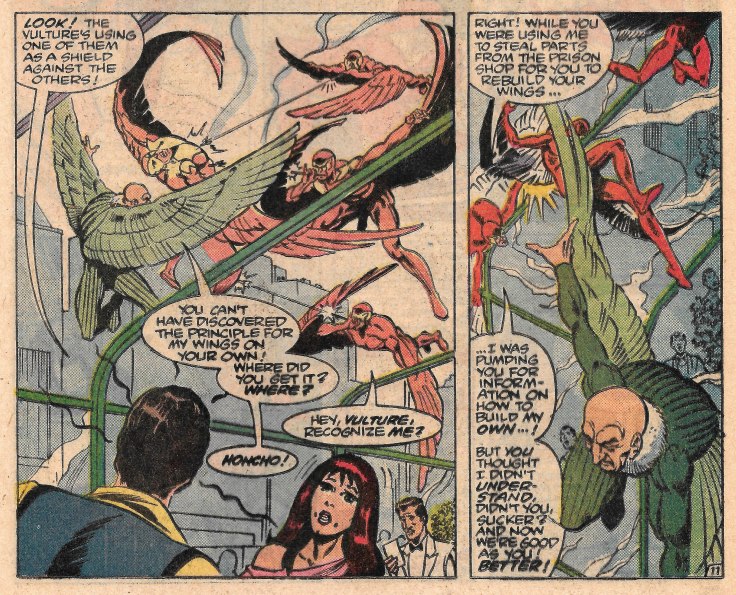 And right onto their table… 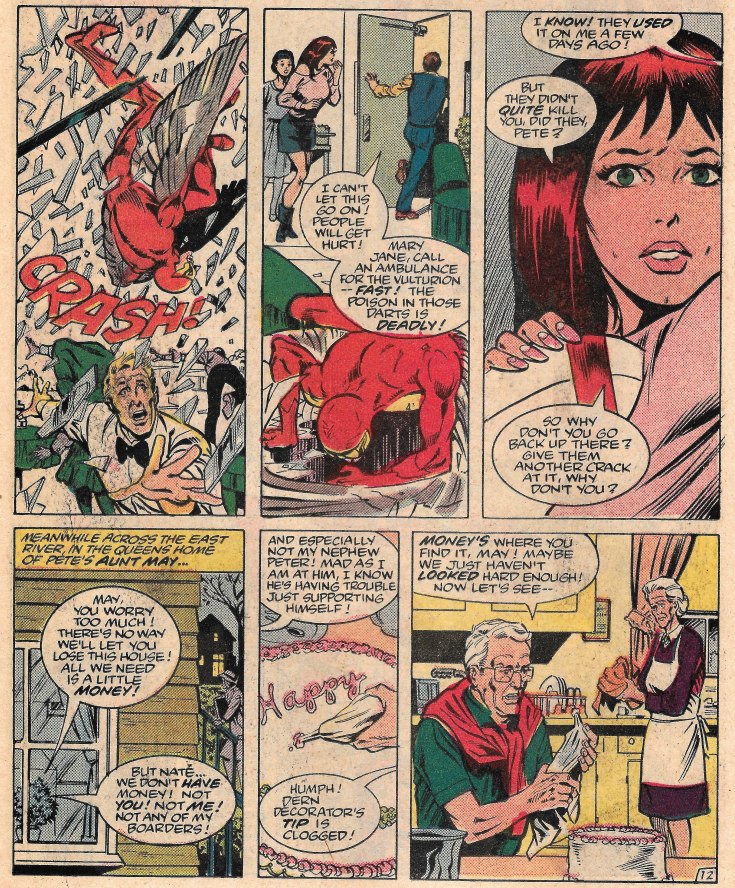 With all this going on, we turn to May and her suitor Nate discussing one of the hallmarks of the Spider-Man mythos: never enough money. That was the fuel for so many of the beginning tales and appears to be a well they can tap even in this new series.

The Vulture/Vulturions fight takes a turn as Vulture appears to run from the combined forces of the Vulturions. In reality he tests their flight capabilities to the point of knocking one more of the out of the sky. 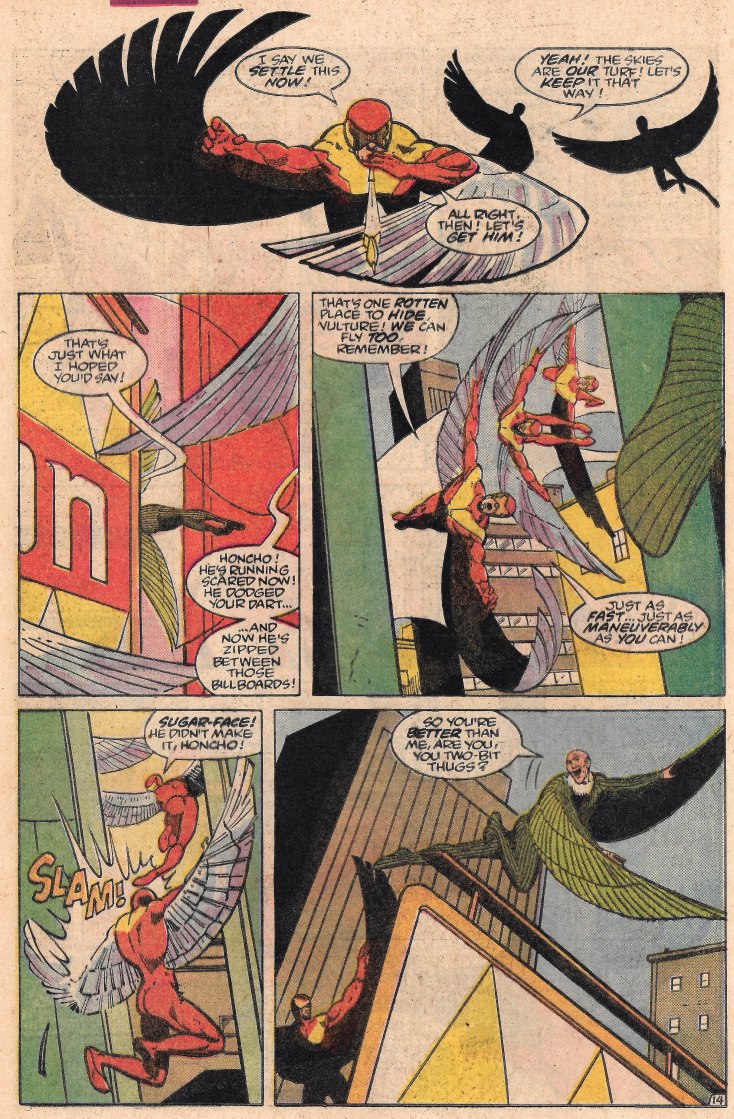 The Vulture is actually picking them off, one by one. He targets Honcho dead last. 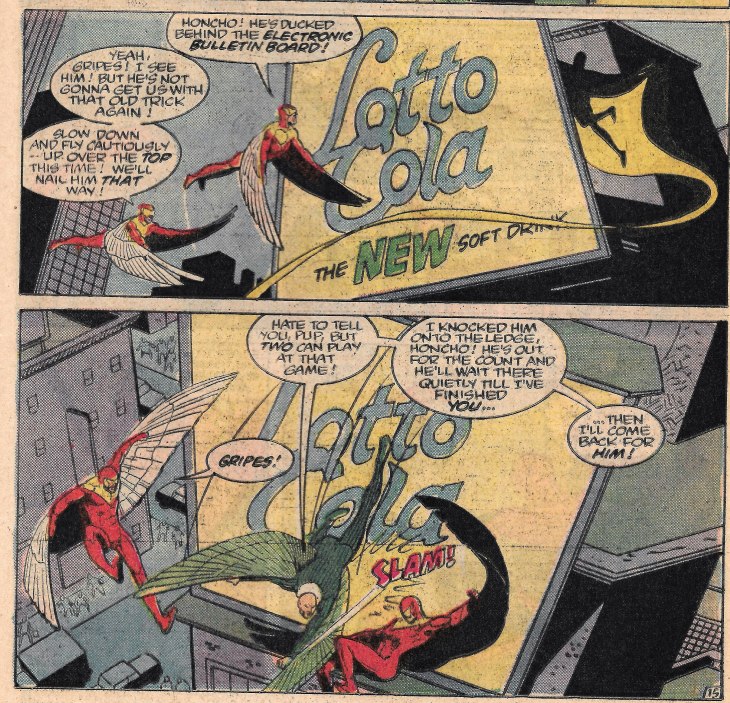 Spider-Man finally swings into action, however realizes he’s left his goodwill present behind. 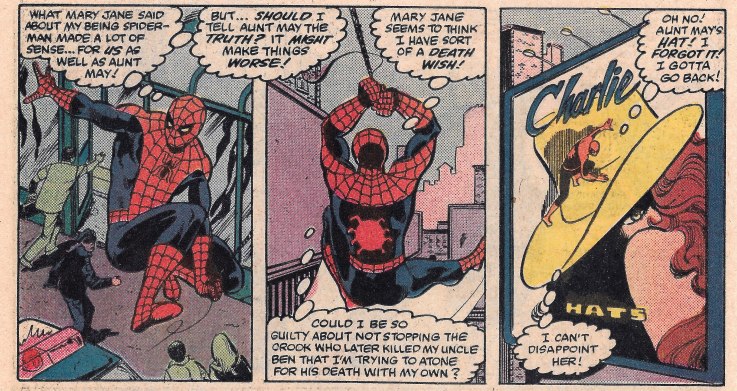 Unfortunate as that may be, he must let it go and concentrate on capturing the two flying adversaries before they jet off again. One bit of fancy web shooting captures the Vulturion before Vulture can dash him to the pavement… …saving the crook’s life while also alerting Toomes to his presence. Before the Vulture can escape, Spider-Man snags him to tag along for the ride. 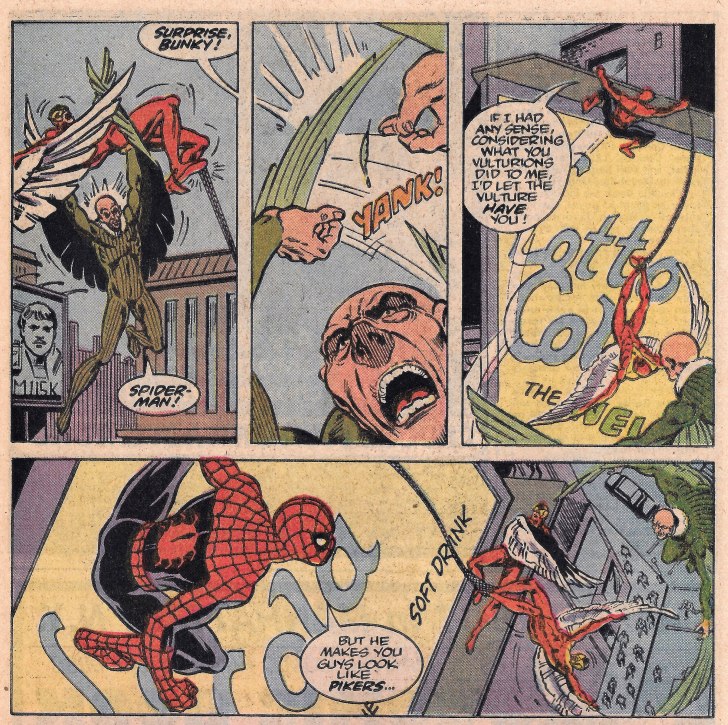 Toomes drags Spidey through billboards and through electrical wires without slowing his pace. 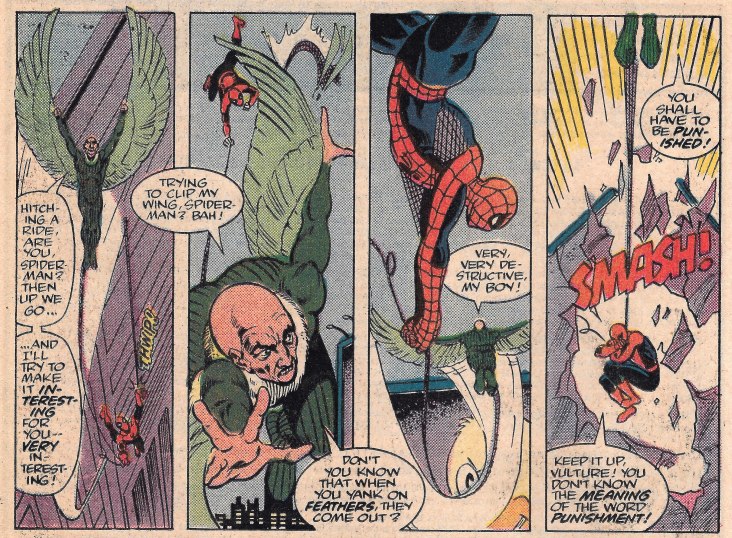 However, it isn’t until they take a swing by the prone Vulturions that Spidey’s luck takes a sharp downturn. 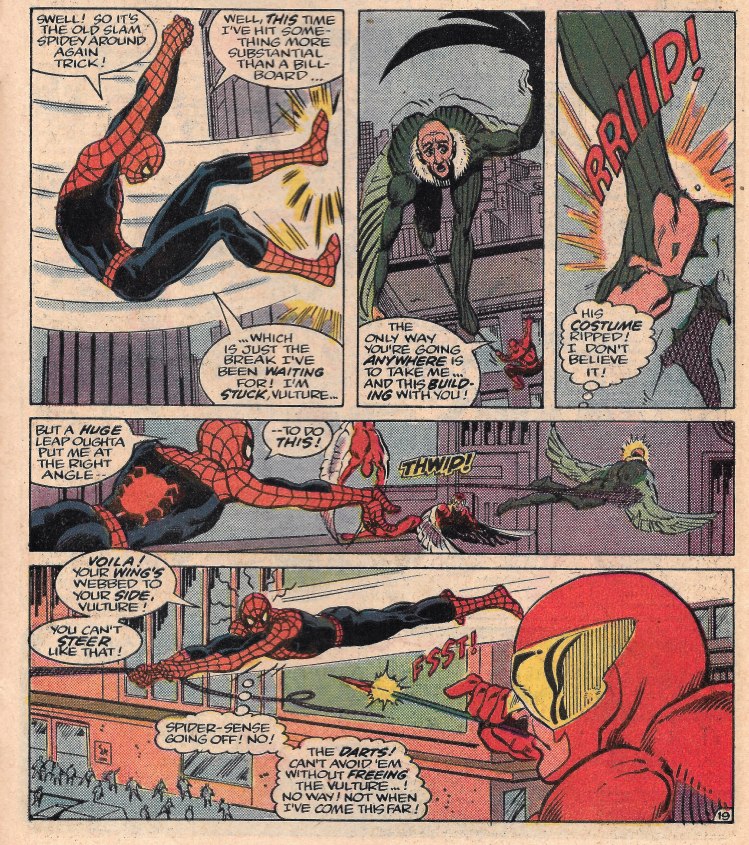 He ends up beaten, battered, and losing his hold on the Vulture, who makes good his escape. Not to mention the fact that in the daze Peter realizes he’s missed the post and can’t mail his Aunt her hat. With that, he blacks out. 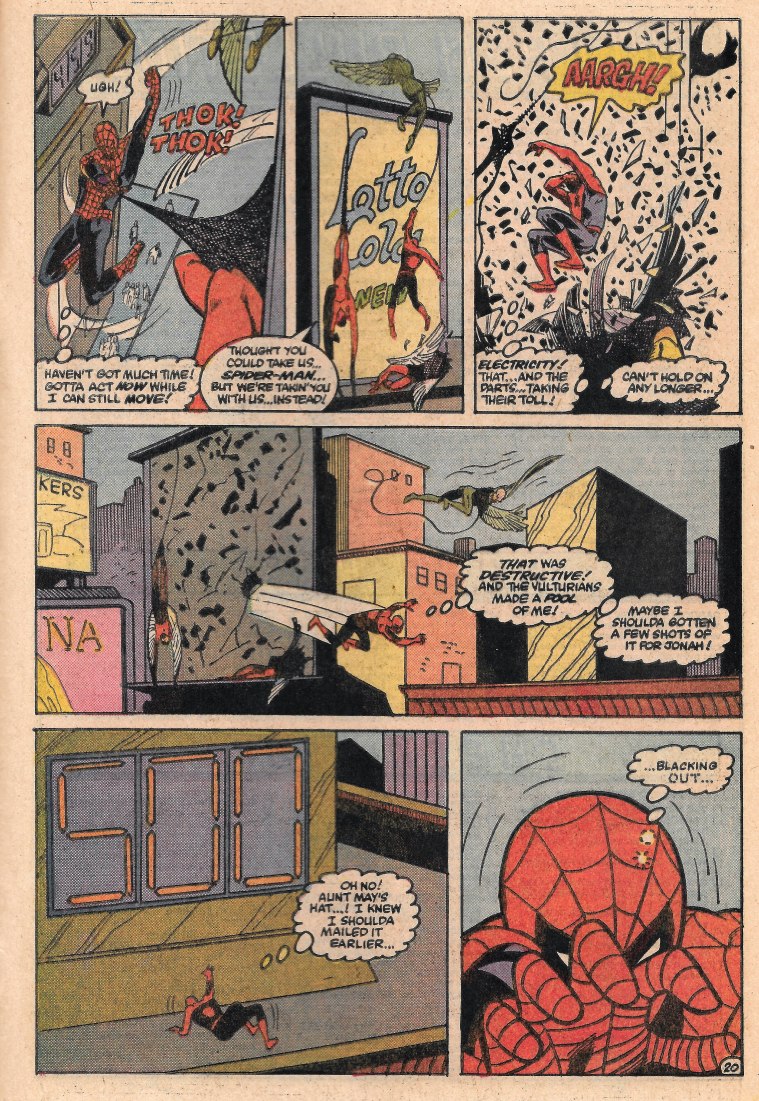 The next morning brings a visit from Mary Jane and a little surprise. 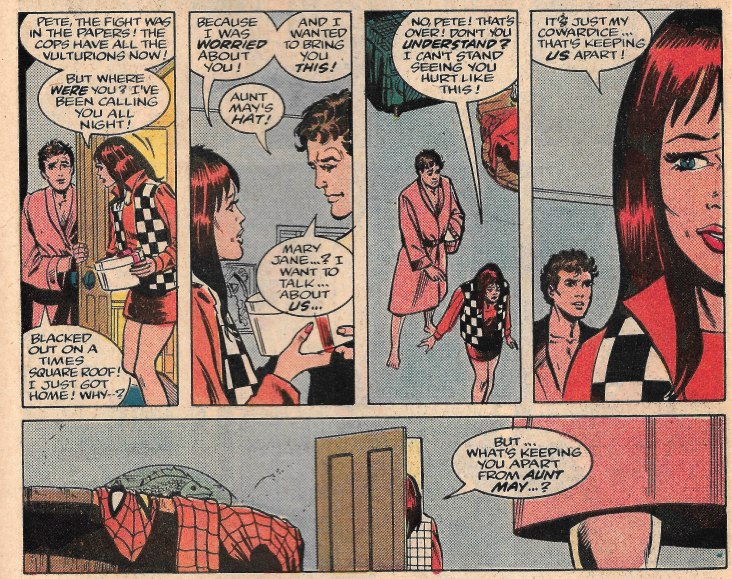 Thus Parker swings all the way out to May’s and delivers the hat to her doorstep, saving his relationship to his Aunt. 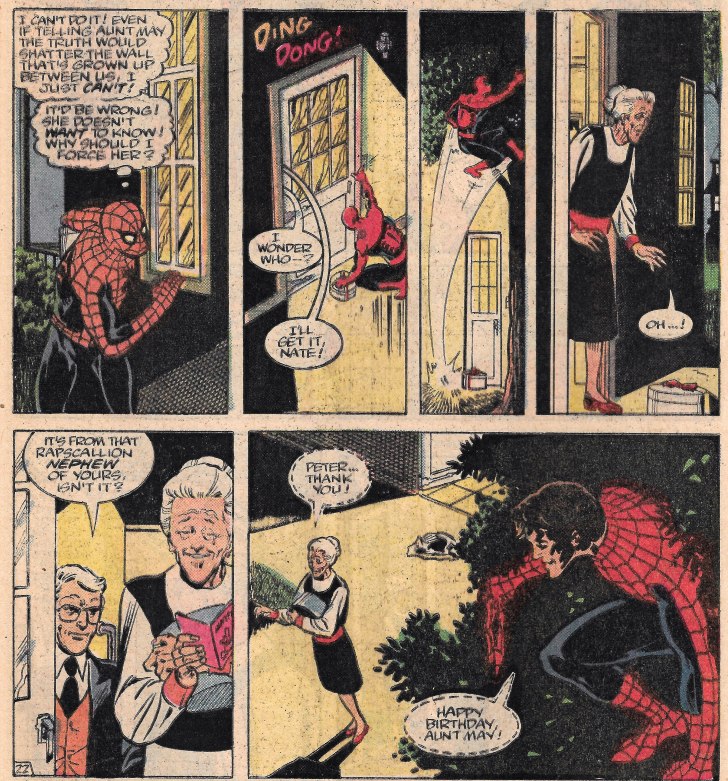 It’s a nice tale that weaves in tons of classic Spider-Man elements, from the characters to the situations.

And with this issue, I am leaving the Spider-verse for a bit. Too many other odd-ball books are calling to me from the nether-regions of the Crapbox. I will be back on Wednesday, however for a very special edition of The Crapbox with my pals from the Super Blog Team-Up. Our last gasp as *shock* the end is near for our merry little band of bloggers.

Prepare yourself for the DEATH of the SUPER BLOG TEAM-UP!
Posted by SonOfCthulhu at 2:27 AM