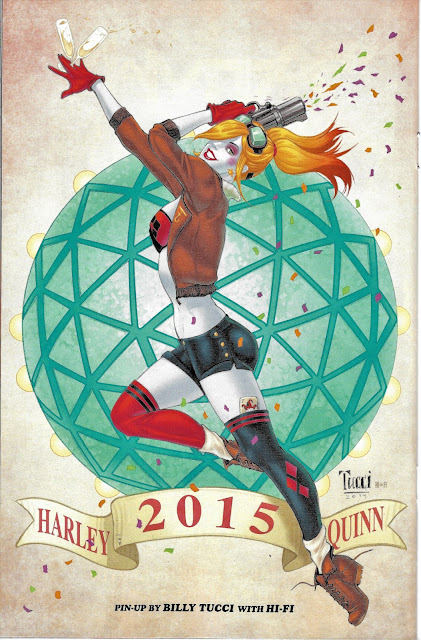 Harley's back half is a bit uneven.

The back half of Harley Quinn's first Holiday Special is two tales with very different art stylings. One of them is from possibly one of the best art deco pencilers ever to walk the Earth and the second is … well, not to my taste. I'll let your own eyes make up your minds on these two. We start with at tale called…

I have never heard of Brandt Peters before, and If I am honest, I really wish that was still the case. Maybe I'm being too harsh? Perhaps. Perhaps my beef is really with Paul Mounts color pallet that turns this entire story into one garish nightmare that bleeds color in a neon hue radiance blinding to behold.

Let's start with an intro to the pest that will be messing with Harley. An earworm in the physical as well as figurative sense. 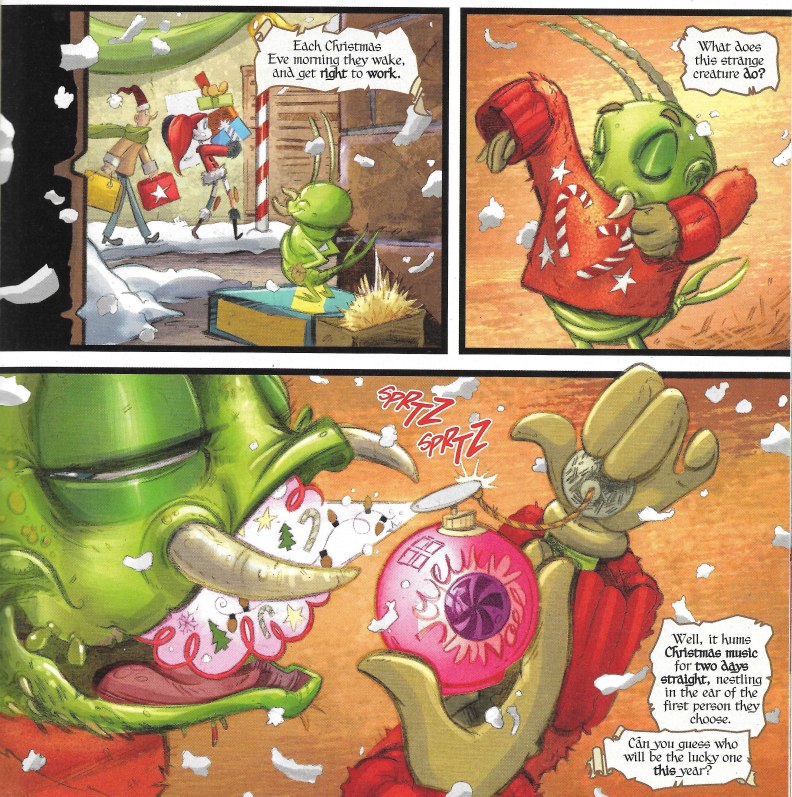 Woops! I've wandered into some child's bedtime storybook. And not one that I approved of. As stories go, this will be a simple one. Harley trips carrying packages. (and oh my LORD, that has to be some bug-eyed alien creature and not a person.) 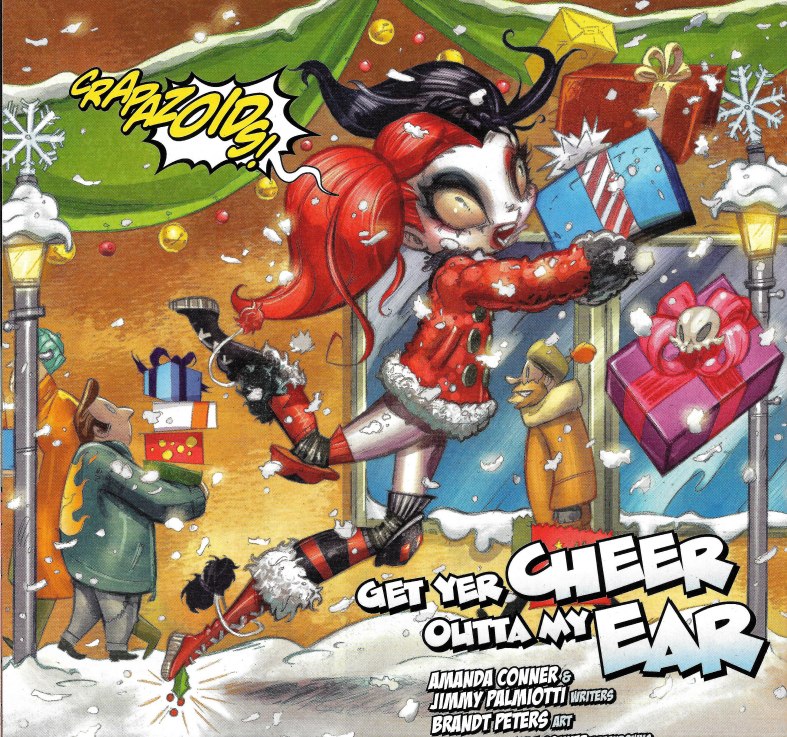 Which leads to this little critter taking up residence in her head. Let's be fair, it was probably pretty much vacant anyway. 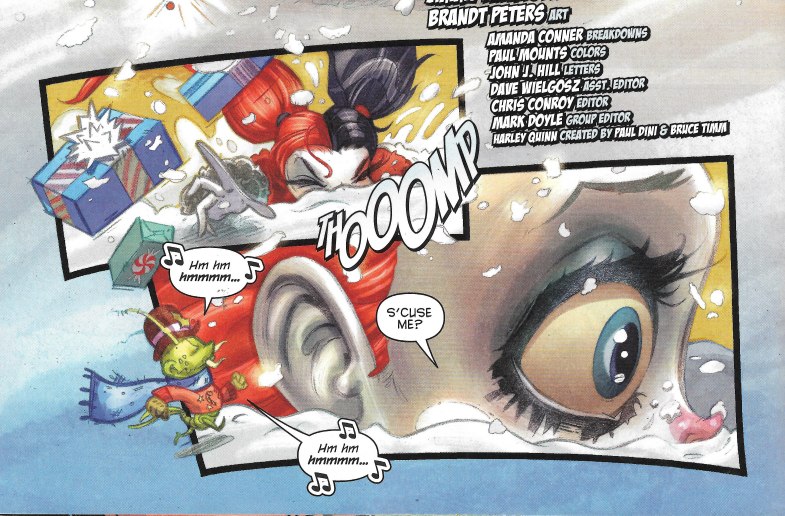 Leading her to act crazier than normal…and it's Harley, so that gives us a huge latitude. 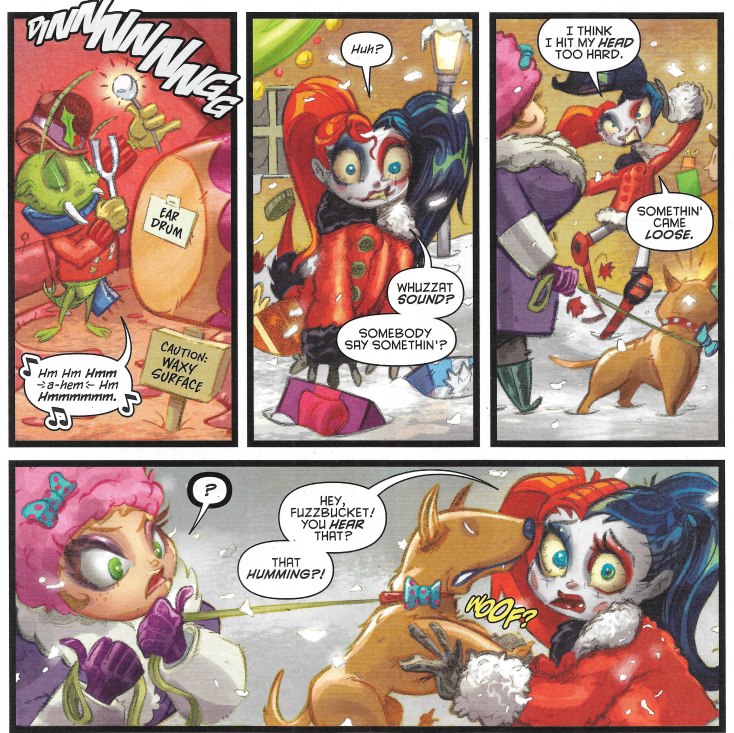 I enjoy the story being crafted here but there are many art panels that give me a kind of cringe. The storybook stylings are so at odds with both the other stories and there are occasional moments that look wrong no matter what. It has that Teen Titans Go flavor that just doesn't sit well with me.

She bumps into a cop…. 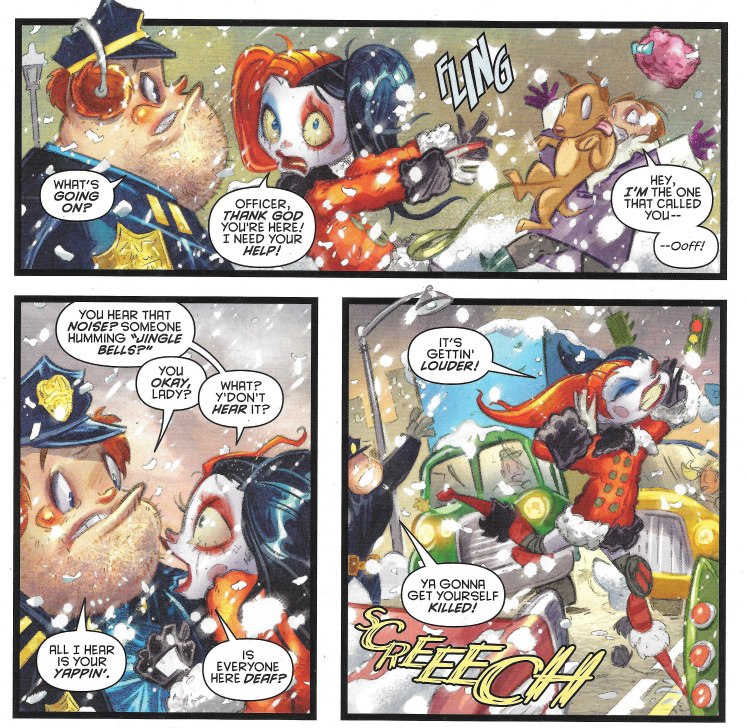 …and that doesn't end well. The gunshot seems a bit over the top as it would likely take that cop's crotch off. 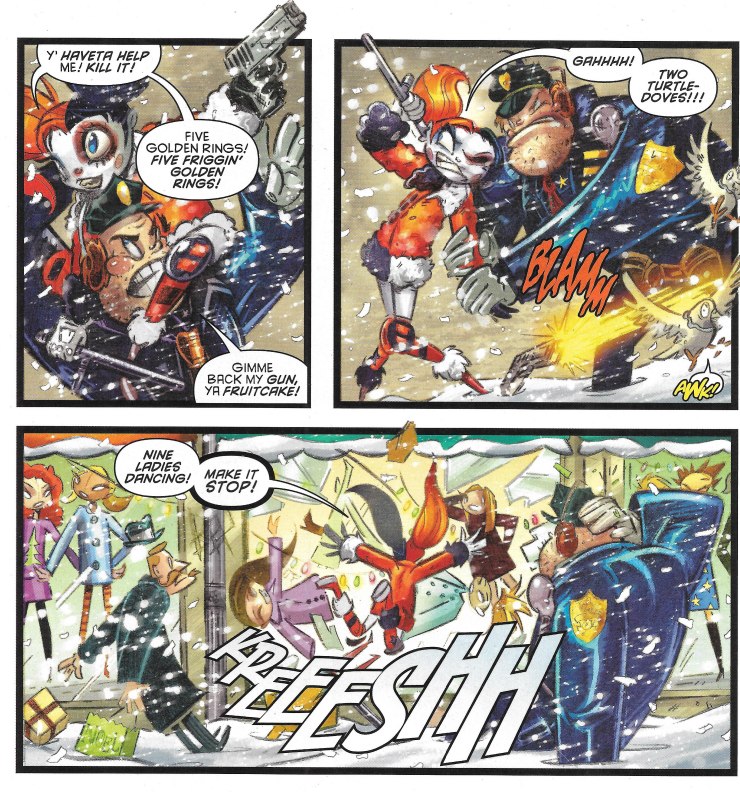 We end up with Harley visiting Santa… 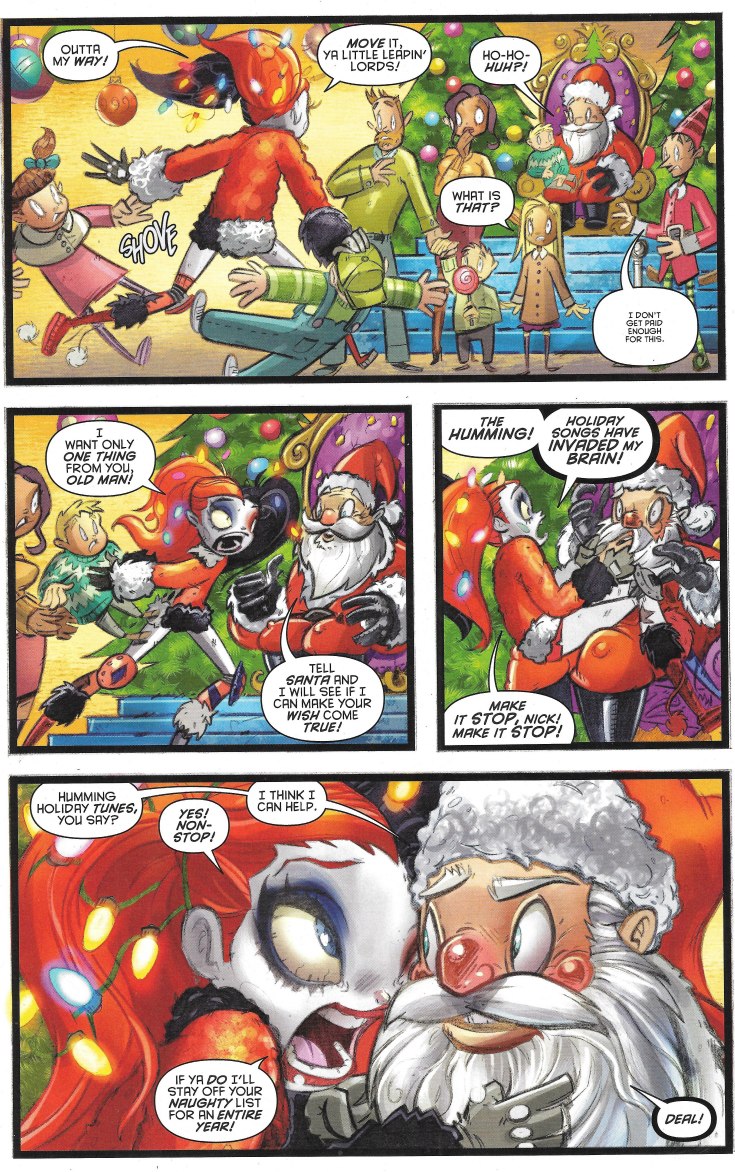 …who knows exactly what to do. 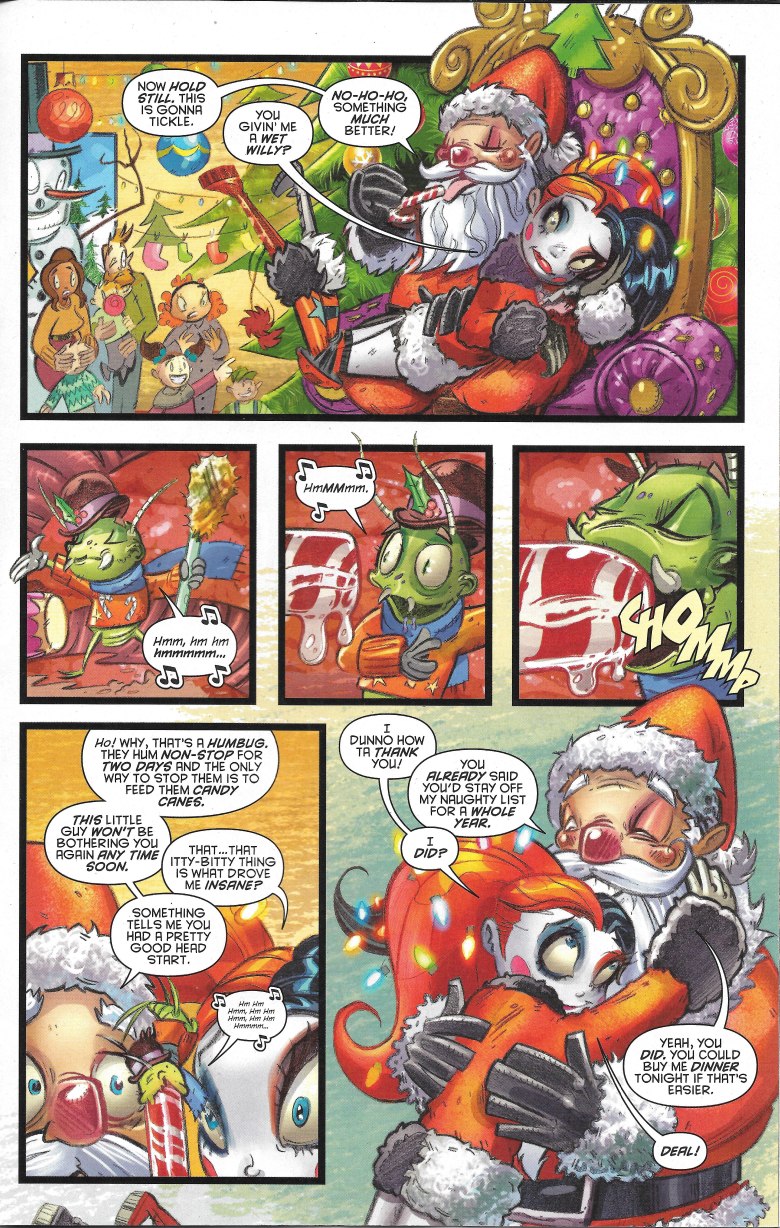 Which is good because I was already tired of this mess a page or two ago. There's a bit at the end about a Jewish deli, but I'm over it already. Just not up my alley.

Ah, yes! The incomparable Darwyn Cooke. His retro stylings and character models are so hard to beat. Even in this back-of-the-book fluff piece, his genius shines through. When we lost him mid-year (2016 was THE year of killing our dreams) at the age of 53 I was in shock. His DC: The New Frontier, Catwoman and The Spirit revamp series were amazing. His talent will be missed, so any little bit we can find of his work is like discovering buried treasure.

We begin this spot with Harley finding a gray hair. This appears to cause her great distress. 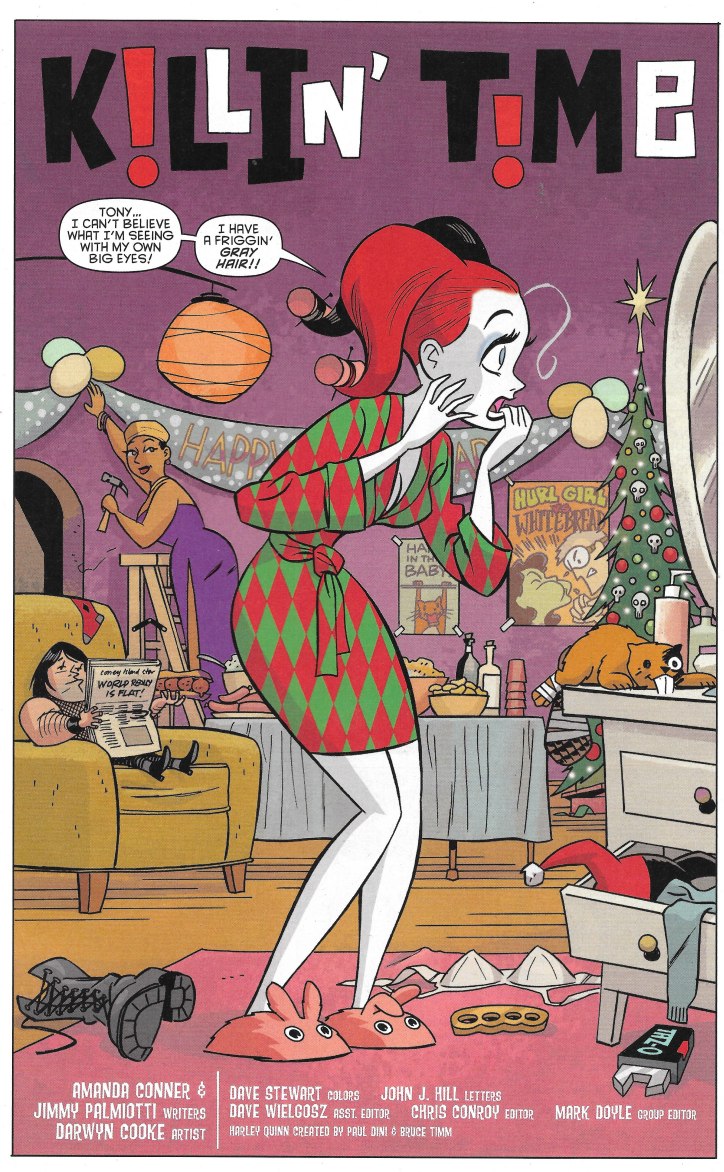 Tony makes things worse by giving her an anthropomorphized being to blame for the gentle aging one goes through. 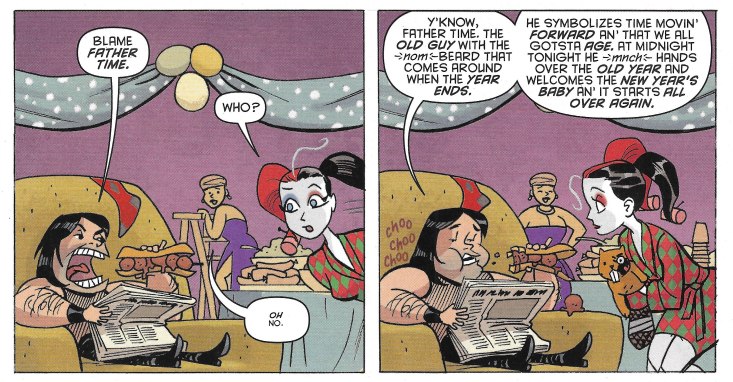 And of course Harley takes him literally meaning someone named Mr. Tyme is about to have a very bad day. Don't you just absolutely love that first panel? I do. I love it. Lovelovelovelove Love it! There is something almost Chuck Jonesian about it. And yes, that is a word. I just made it up, but it is a word. 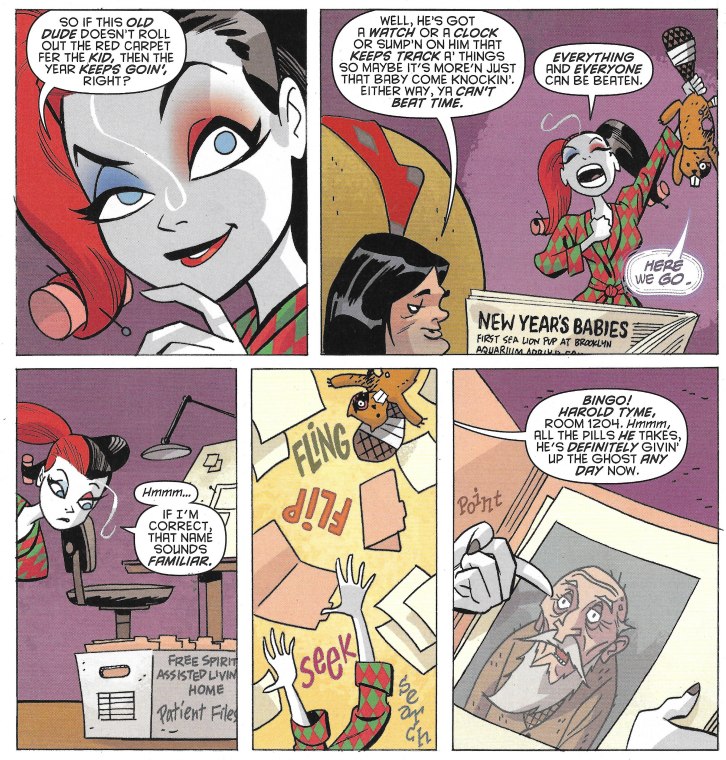 And speaking of words, Harley races off to the hospital to "waste time" with all the implications that has for the poor octogenarian. 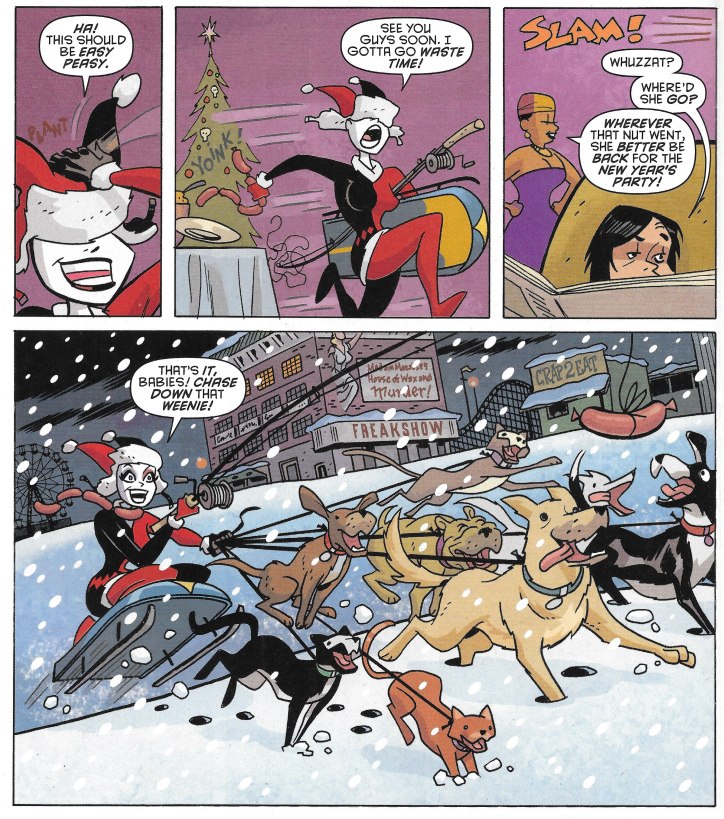 She arrives, sic's her pack of animals on everyone (I didn't know Harley was an animal lover, but apparently so) and then makes her way up to Father Time's room. 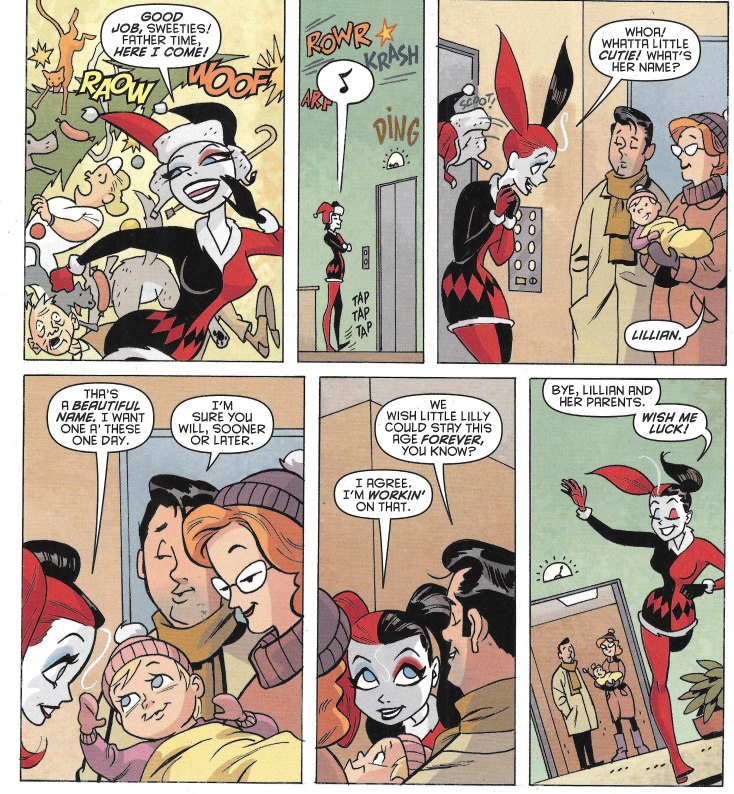 Center bottom picture of Harley's face is just perfect in many ways. It captures her spirit with a minimum of fuss and line work. Why did he have to be taken from us? Man I miss his sense of style. 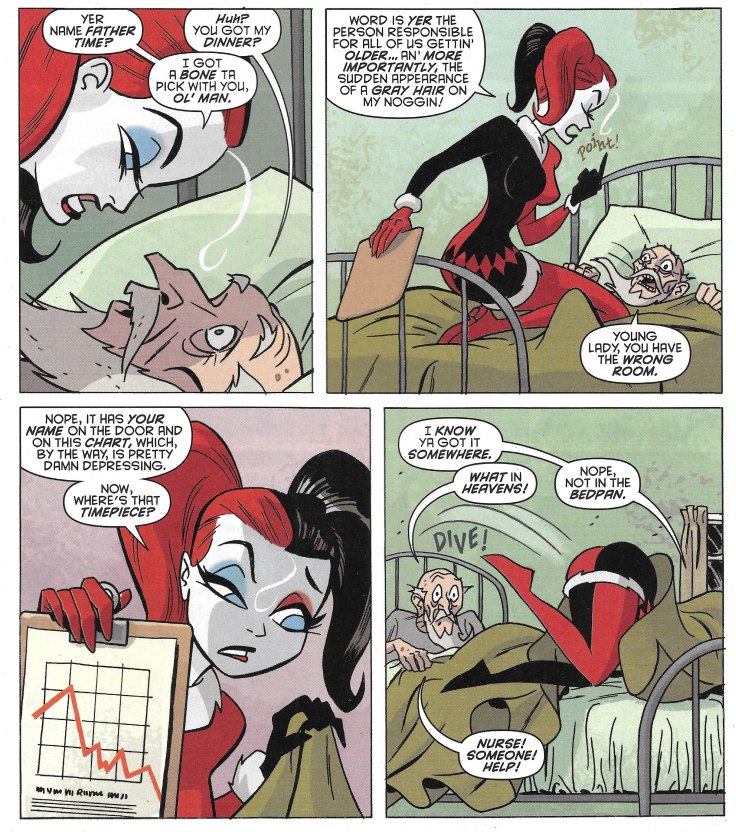 Thankfully, Harley doesn't just off the innocent geezer, but instead attempts to find his timepiece so she can turn back time. 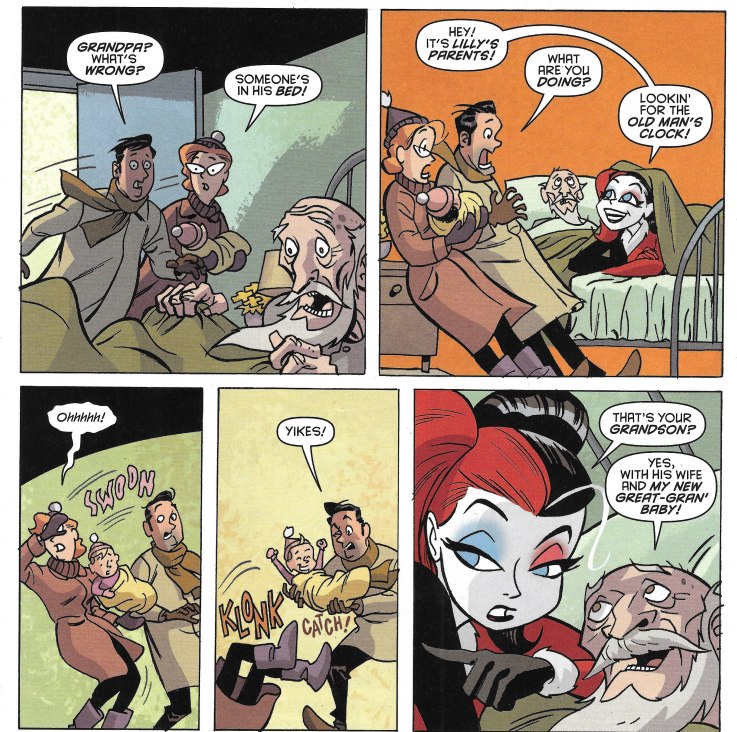 Mr. Tyme is saved by the timely arrival of his grandson and Lilly, who happens to be his great grandchild. I love the look of shock here as Harley pops up out from under the bedsheets. 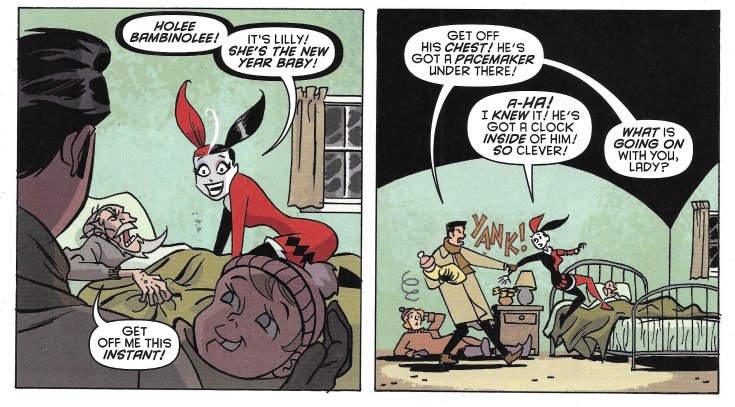 The awareness that Lilly is part of Tyme's family gets Harley the exact wrong idea about her being the Baby New Year. 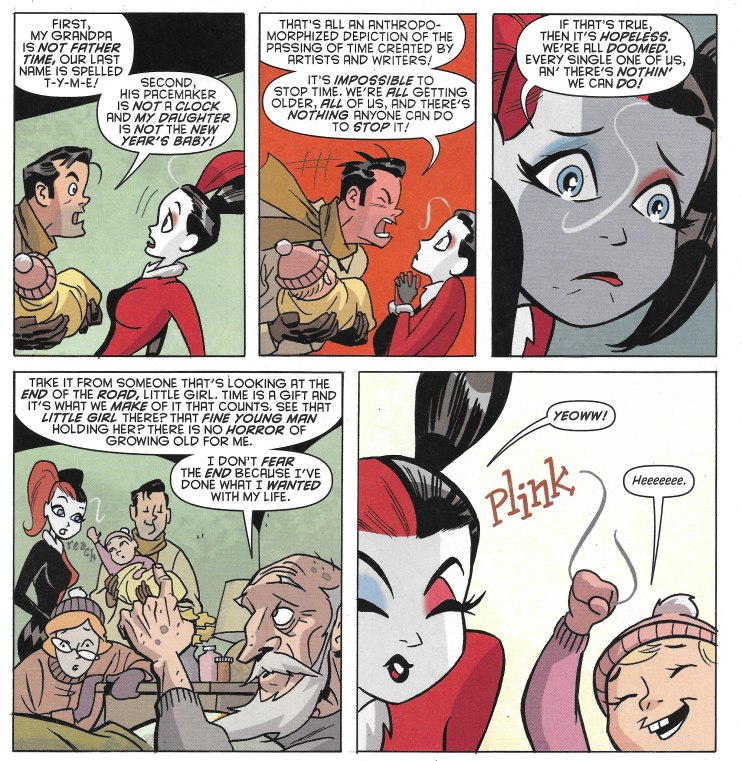 Before too much can go on though, Lilly solves all our problems… 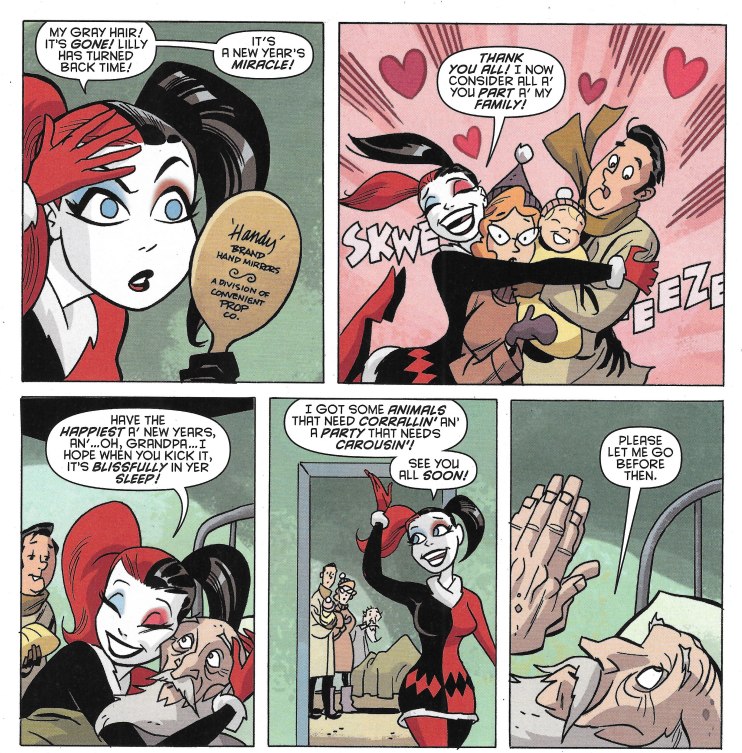 …and just like that, all the conflicts are resolved. 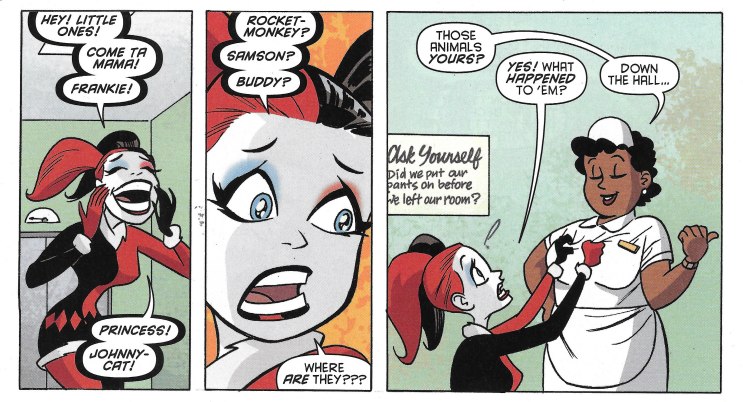 Well, except for the mystery of where Harley's pets are. 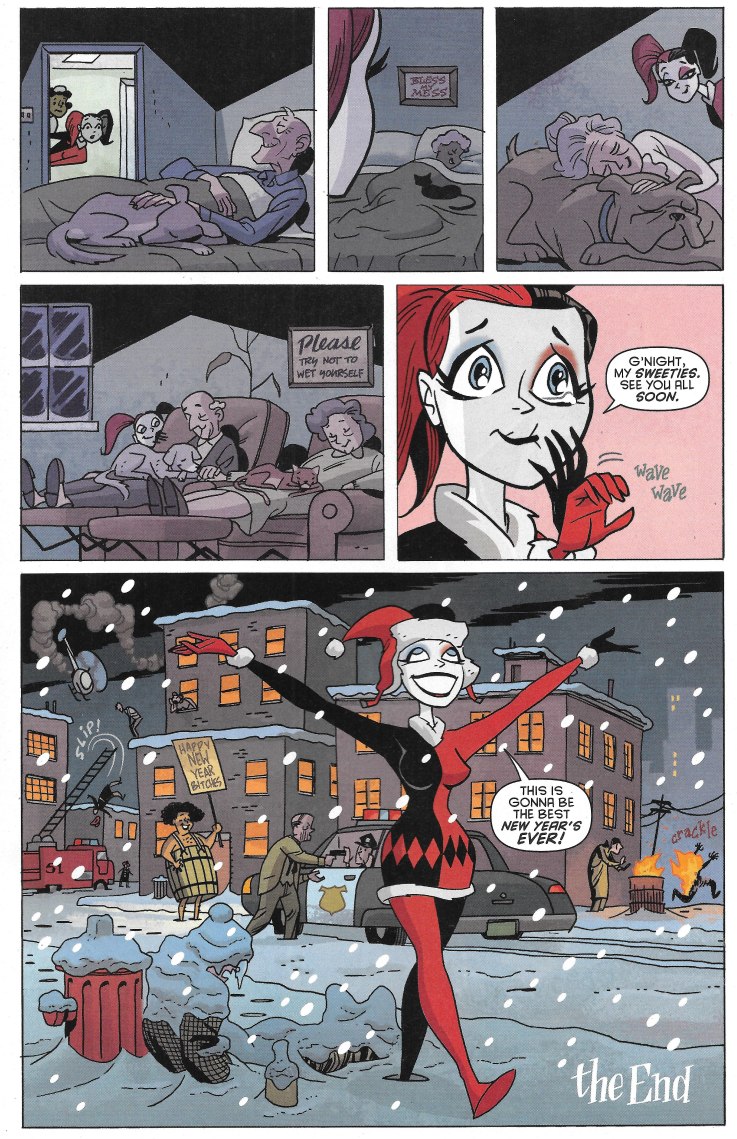 And that turns out to be the sweetest ending of them all.

Great short with WONDERFUL art. I stated in part one that I didn't know what DC was doing with Harley. Being completely honest, I still don't. It appears to be just a comedy book that lacks any real import to either the universe or the character. Maybe that's just the New 52 version. Maybe it is All versions. Hard to say at this point.

However if they have any more Darwyn Cooke stories slated to appear in the book, count me in!

Happy New Year, everyone. The Crapbox may return on Friday for one last hurrah if all goes well this week. Until then be merry!
Posted by SonOfCthulhu at 3:42 AM