From the TV show that started it all

“Inthe great Hall of the Justice, there are assembled the world’s four greatestheroes. Created from the cosmic legends of the universe…”

…and from that point on, you know you are hooked.

At least I did back in 1973. Saturday morning cartoons were serious business for a child of the 70’s. My own kids really never experienced what it was like to not have 24-hour cartoon channels on cable and later, the variety of programing options that Netflix, Amazon Prime, and YouTube provides.

Back then, cartoon options during the week were scarce and the depth of content provided early morning on Saturday was a veritable feast. I can remember spending hours poring over TV Guide Magazine ads like the few below trying to determine the optimal viewing schedule. Back then, the networks would even host prime-time specials touting their upcoming shows in hopes of snagging important younger demographics during those Saturday viewing slots. 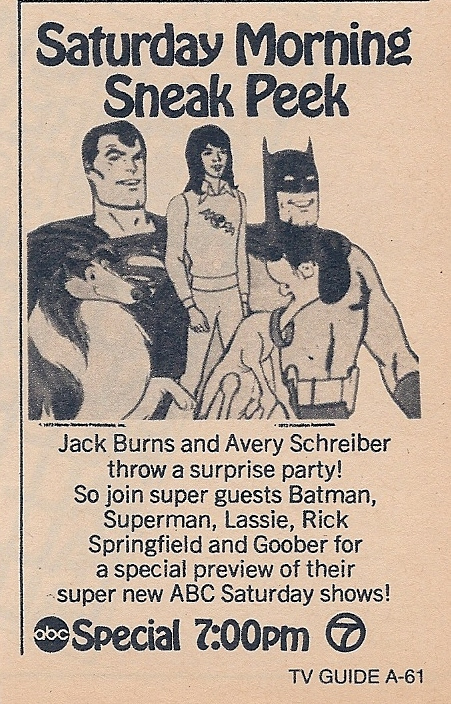 I believe it was toy and cereal advertisers who benefited from my partaking in these early morning weekend romps through toon town. Or at least I remember them being on during the breaks the most. How else do you account for me knowing “Honeycombs Big – yeah, yeah, yeah/it’s not small – no, no,no/Honeycombs got/a big, big taste/big, big taste in a big, big bite” yet not how to multiply fractions?
And don’t even get me started on “Follow your nose…”

Decades before DVR and On Demand (or heck, even VHS recording), if you missed the beginning episode of a show there would be a long wait until you could see it in re-runs. So if you scheduled a show that turned out to be lame, you were at the mercy of the programming gods of ever seeing what was on the second choice channel.

I’m certain I saw the Super Friends debut in 1973 and I know I watched the show possibly until the 1978 season where it became Challenge of the Super Friends. I know that I was crushed when the Wendy, Marvin, and Wonder Dog got the axe. I remember looking forward to the Wonder Twins up until Zann proved so unimaginative as to always become a puddle in a bucket when he could have been anything he wanted to ice-wise. I remember leaving the show when I matured and its scripts tended to grate more than excite, when the promise of all of DC’s greatest superheroes distilled through scripts dumbed down for a kiddie cartoon show failed to lift my spirit.

By the end of high school, my feelings of the Super Friends was pretty much the same as anyone raised in that era: it was a silly program aimed at kids. It tainted the DC characters in an unexpected way, making Marvel’s content appear edgy and mature. Never mind that Spider-Man and his Amazing Friends show was on par with Super Friends.

As we age, we look back on tokens from our youth in a kinder way.

And Super Friends deserves a soft filter. The show lasted from 1973 through 1986 in either ten or eleven seasons (depending on how you count years where the same episodes were re-run). It kept DC’s trinity (plus Aquaman) household names while also introducing the publishing giant’s B-and-C-list heroes to new audiences.

And when the show was re-introduced in 1979, it was given its own comic book title. Originally just a tie-in to the show, writer E. Nelson Birdwell treated the adventures with a more serious attitude, giving last names and backgrounds to both Wendy and Marvin, as well as removing the camp that followed the Wonder Twins. In fact, issues 6 through 9 of the book explains the departure of Wendy and Marvin, something never addressed in the TV show. 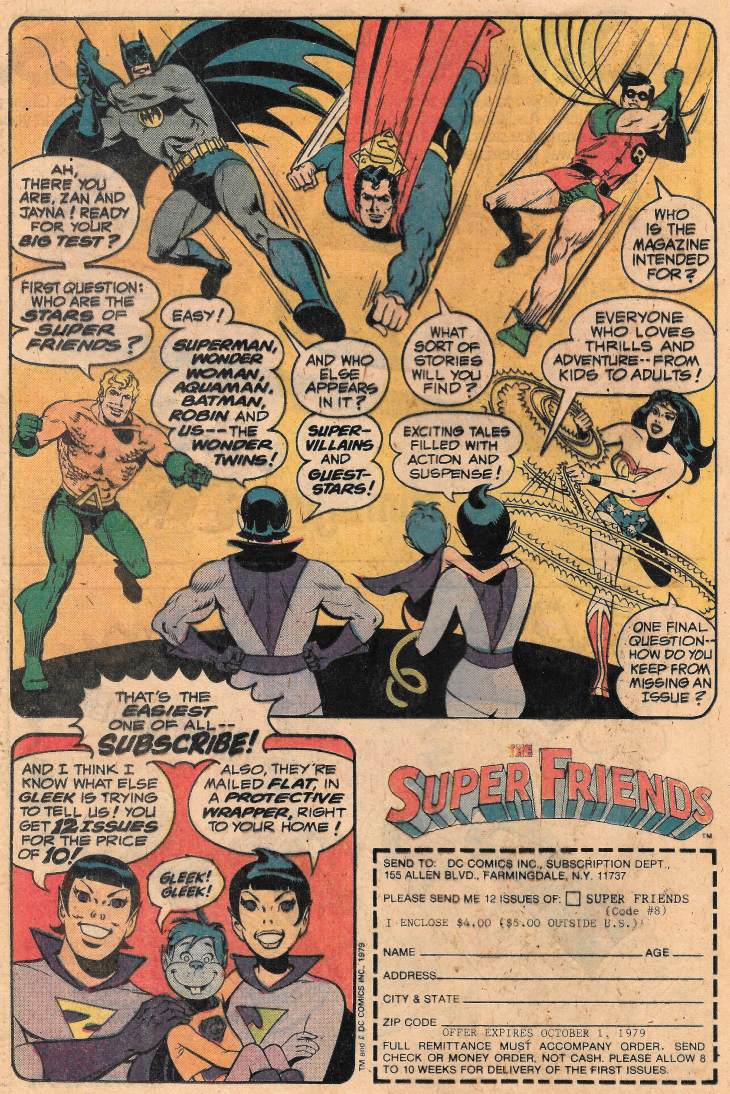 Popular nerdology at this time places the adventures of the Super Friends book as taking place on Pre-Crisis Earth-One, citing specific issues of DC proper comic books like Superman Family and Brave and the Bold as having unexplainable details if you take Super Friends out of continuity.

Before you settle in for this issue, I will warn you that the art and story are still mostly simplified and kid-friendly. It won’t blow your socks off, but it might give you a greater appreciation for Birdwell’s attempts at a serious Super Friends comic book in a world where we already have a Justice League of America title.

Our tale is called Puppets of the Overlord, a villain character that I don’t see referenced in the show nor one I remember. His power is mind control and at the onset of this tale it appears he has tricked the Super Friends into believing that another man was “pulling all the strings” in a prior issue’s villainy. 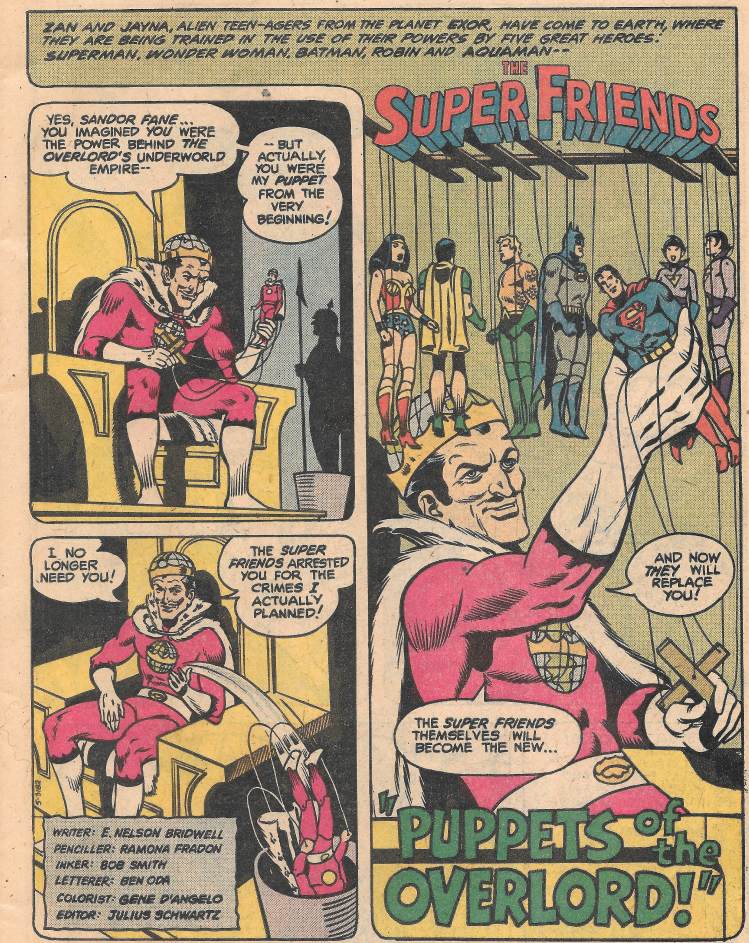 The fact that the book has a continuing storyline came as a shock to me. Kid friendly shows and their associated spinoff material were usually like 1960’s sitcoms, nothing ever changes from episode to episode and they can be viewed in any order. But here we have a story that looks to arc beyond a few issues, so color me intrigued by this page one dialogue. Maybe I thought too little of the Super Friends comic?

Overlord plays with himself for a bit. 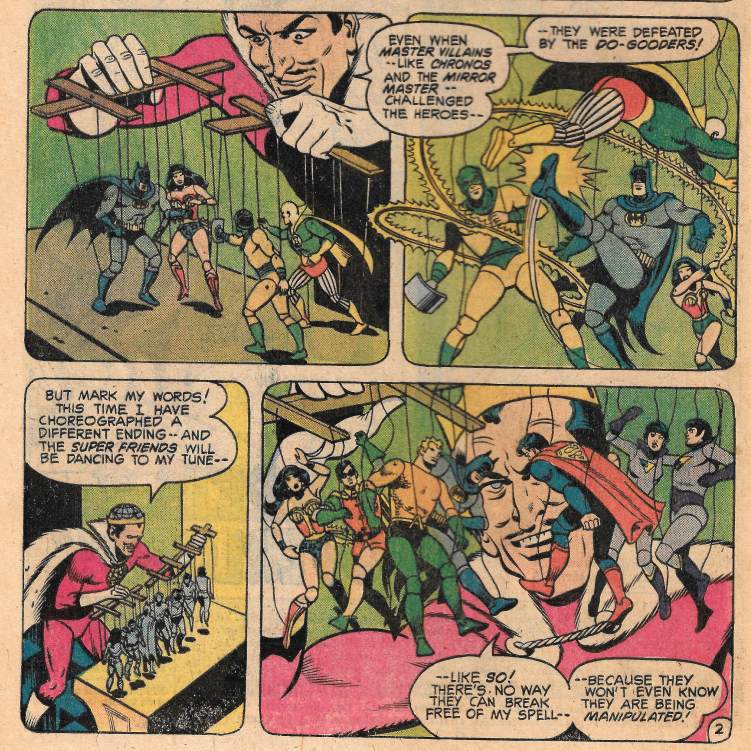 …with the PUPPETS! Get your mind out of the gutter.

It appears he isn’t done messing with the Justice League. He puts on his Thought Induction Helmet (which would mean magnets, right?) and uses it to influence the Leaguers to do his bidding. And the Overlord’s bidding means taking over the entire Earth. 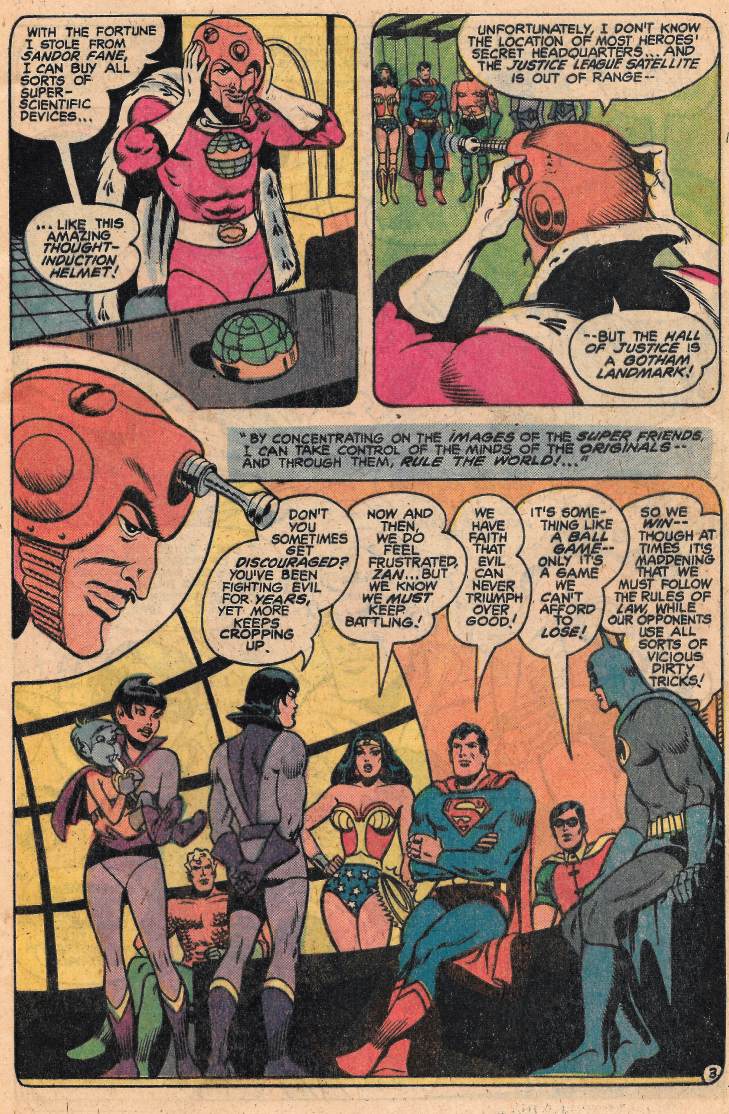 That means the good sentiments above get twisted into the nefarious plans below. 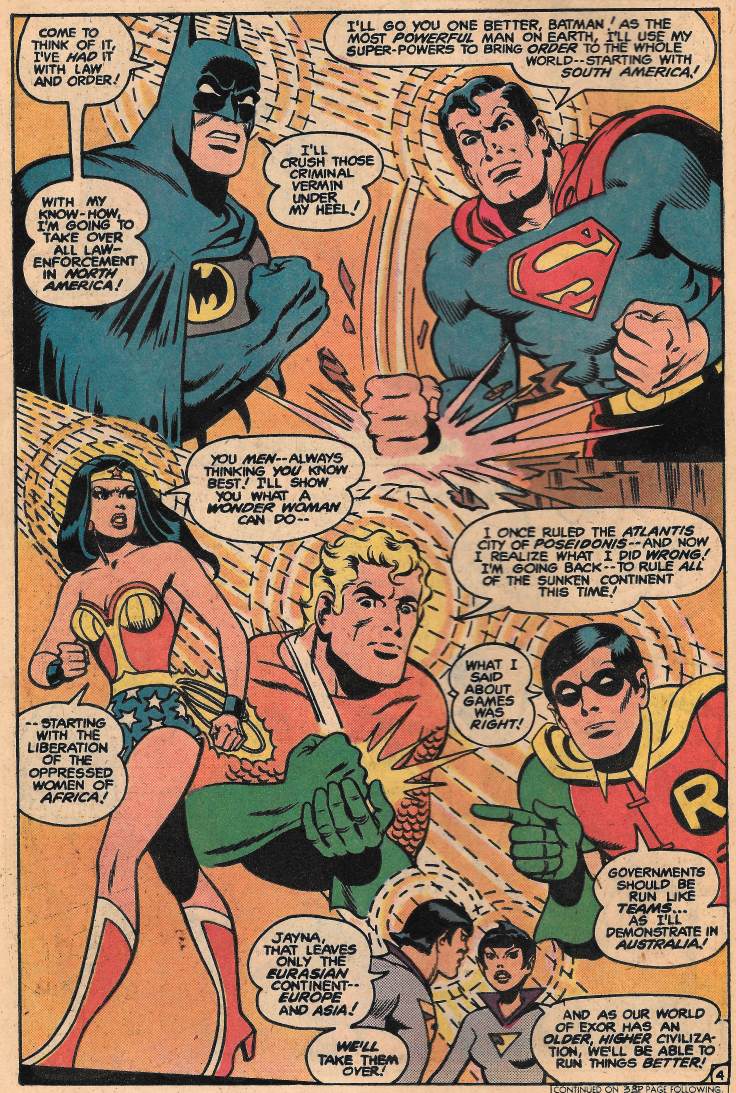 Our heroes are starting to sound a bit like fascists. Even the Wonder Twins aren’t immune to the ray’s effect, which I felt for sure would be the plot of this book: Wonder Twins trying to stop the four bigs from completing their mind controlled tasks. Instead no one will be there to stop them. 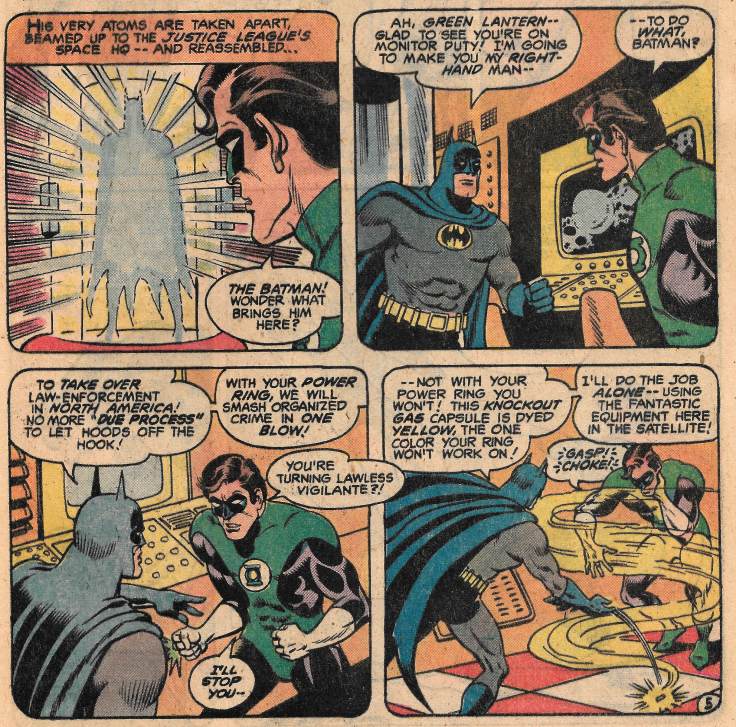 …where he spills the beans on his intentions to Green Lantern Hal Jordon.

Of course, Hal moves to stop him, but this is Batman and you know what that means. Yup. He knocks out the emerald leaguer with some kind of yellow gas from his utility belt. Looks like Batman is going to effortlessly take over the USA and Canada.

Moving on to Superman in Brazil, we get a surprise: the introduction of the Green Fury, Beatriz de Costa. She would later go by the handle “Fire” and be a huge part of the Giffen era Justice League. 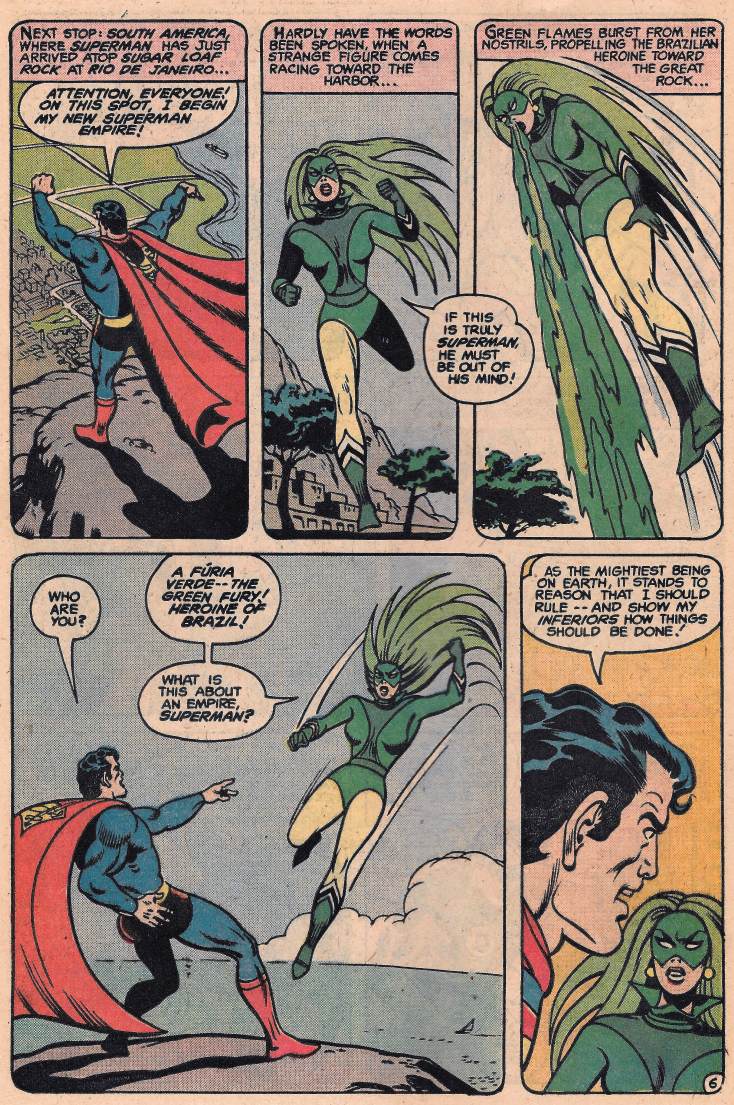 She would not, however, fly by shooting fire out of her nose. Who thought of this as a method of travel and what were they smoking?

Superman being all super-arrogant and bossy doesn’t sit well with Green Fury, who tries running hot and cold with the man of steel. Note: I did not know she could do “cold fire”. That’s a new one on me. 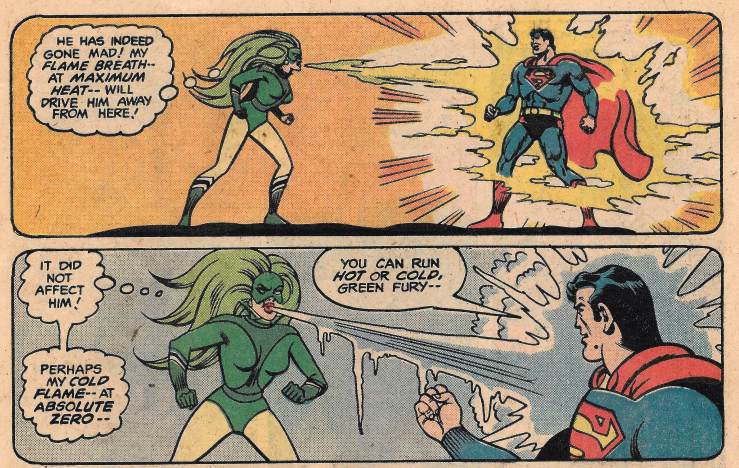 Neither affects the Supes and he kicks her off his rock. 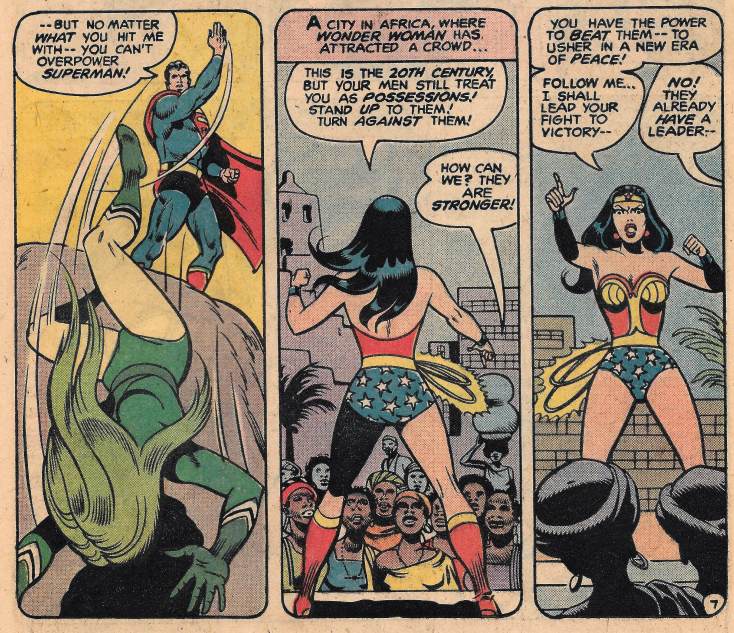 Looks like green-based heroes are not having any luck against the mind controlled heroes, so let’s see if anyone else in the color spectrum has a shot? We move on to Wonder Woman in Africa trying to turn women against the men, only to be challenged by… 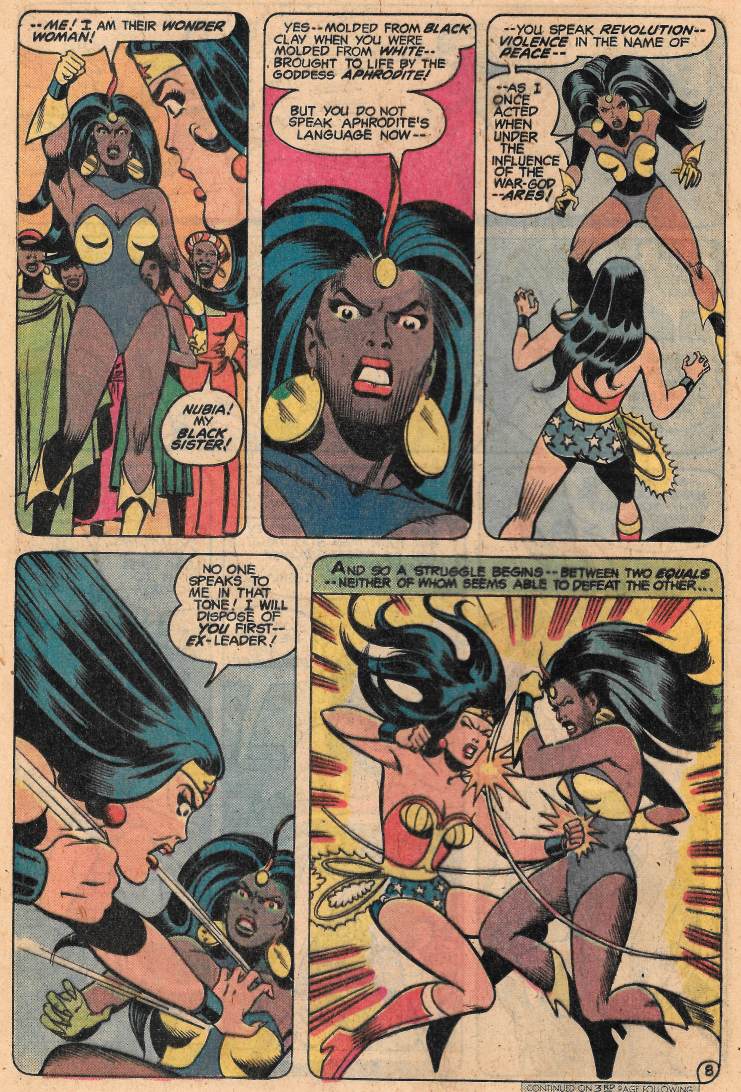 Nubia, the black sister of Wonder Woman also known as the Wonder Woman of Africa. She was molded from black clay (that’s racist!) and brought to life by Aphrodite. WWA had been through this mind control thing once before when she was hypnotized by the war-god Ares, so the sisters get to punching each other in the greatest cat-fight a children’s comic book has ever seen.

I just realized I was doing this wrong. I need those “lights flashing throughspace with the odd swooshy sound effects going off” transitions if I’m going to do all the cartoon tie-in justice.

Okay, so maybe that kind of trailed off into a beatbox remix, but what can you expect?

Back to Australia, Robin is inciting the kids to riot against their elders when he is approached by the Tasmanian Devil, who tries to shut him down. 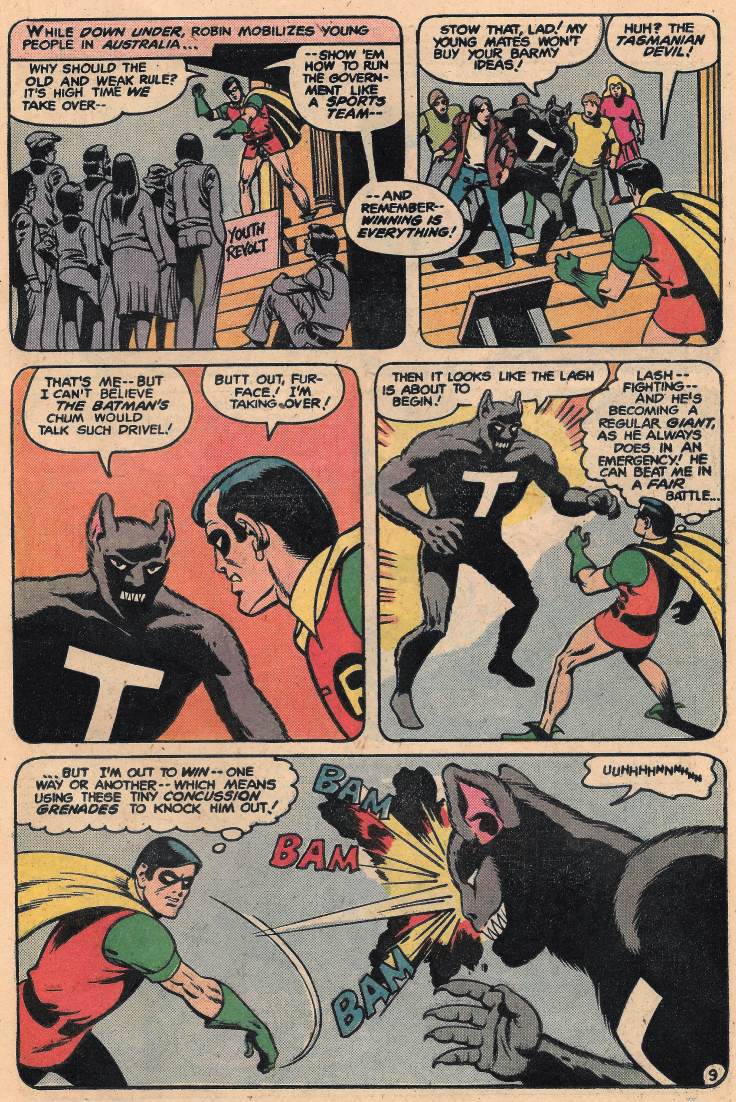 Tas doesn’t use his spinning around power and he’s a bit more eloquent than I remember from his days fighting the evil, gray-rabbit villain Bugs something-or-other, but he is no more successful, being taken down by a face full of concussion grenade.

Meanwhile, under the sea…

Mera and Aqualad have similar issues preventing Aquaman from attacking the surface world. Both are taken out by Arthur’s fishy pals. 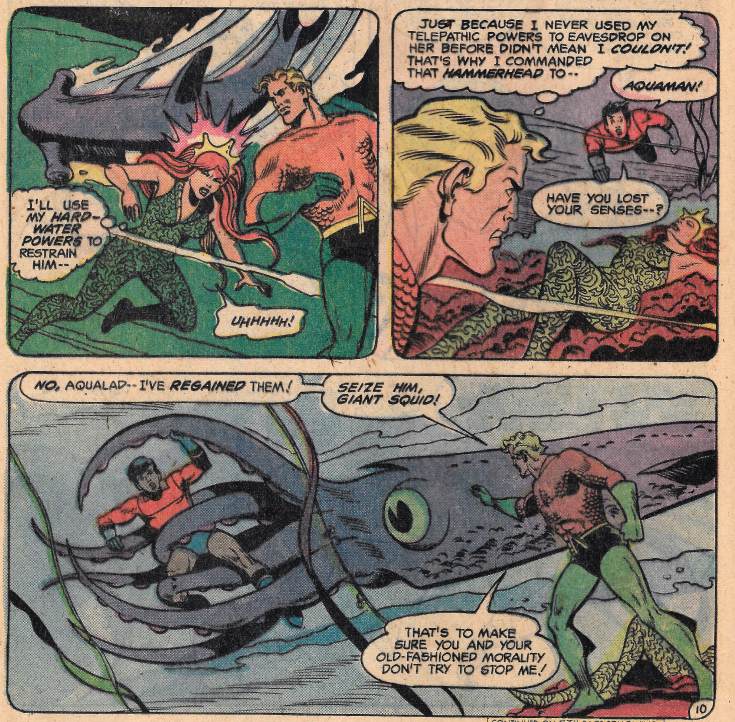 Zan and Jayna try to turn the Arabian peninsula into New Exor with themselves in command, only to be confronted by The Seraph, an Israeli superhero. 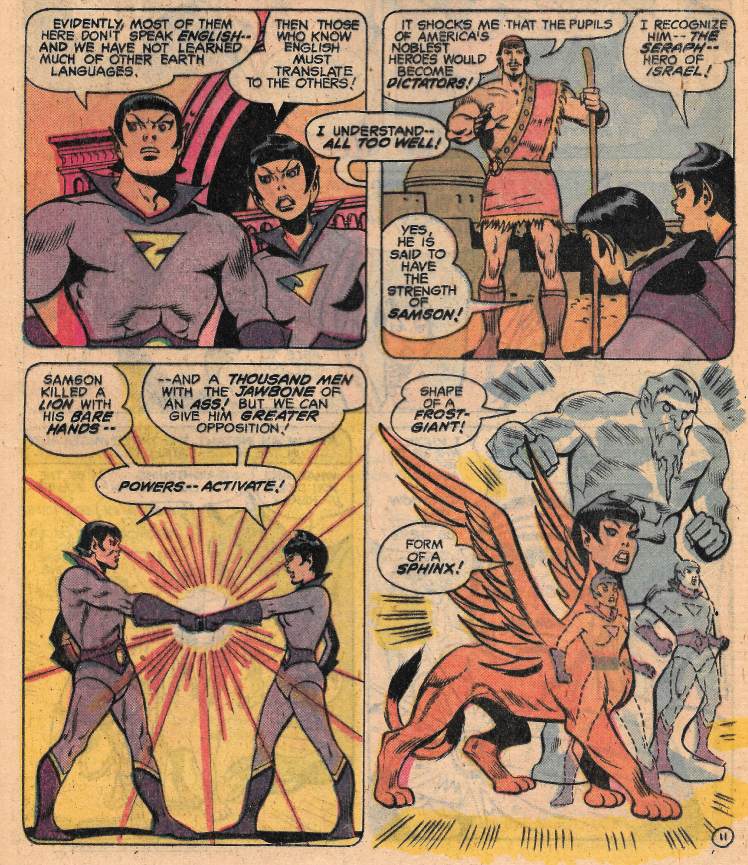 They go at him using more than the standard “Eagle carrying a pail of water” tactic. Jeebus the writers on the show were really lame when it came to choosing what the twins turned into. Either that or the animators cost too much to bring them back weekly for additional cels.

Nicely, I was sort of right. Having the kids go through their transformation causes the Overlord’s power to short circuit. They are no longer mind controlled. 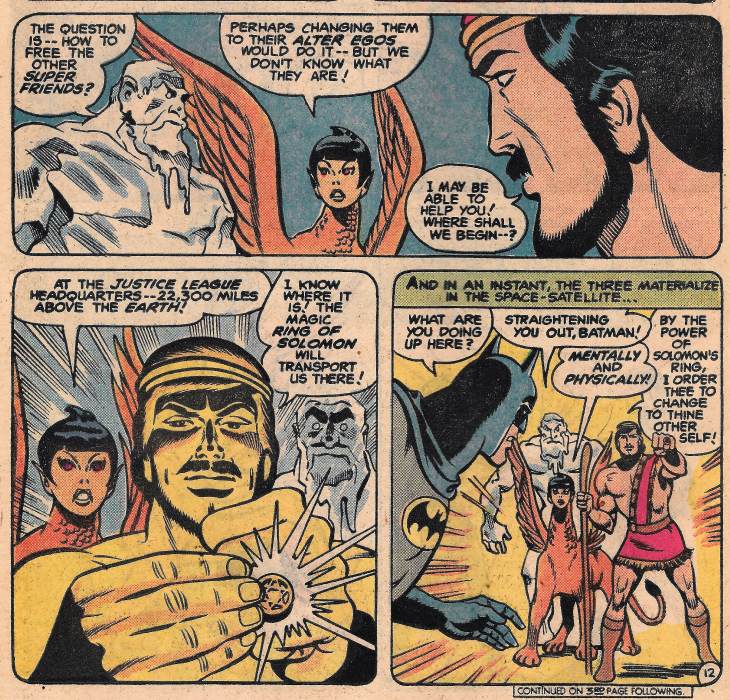 They decide to keep these forms until all the other leaguers are freed. To break the Overlord’s hold, they determine they have to cause the superhero to change back into their secret identity. The group decides to start with Batman.

While Jayna holds him down, Zan’s ice giant takes off Batman’s suit and dresses him in business casual millionaire-style. Or Seraph works magic on him, whichever is more appropriate for a kid’s magazine. 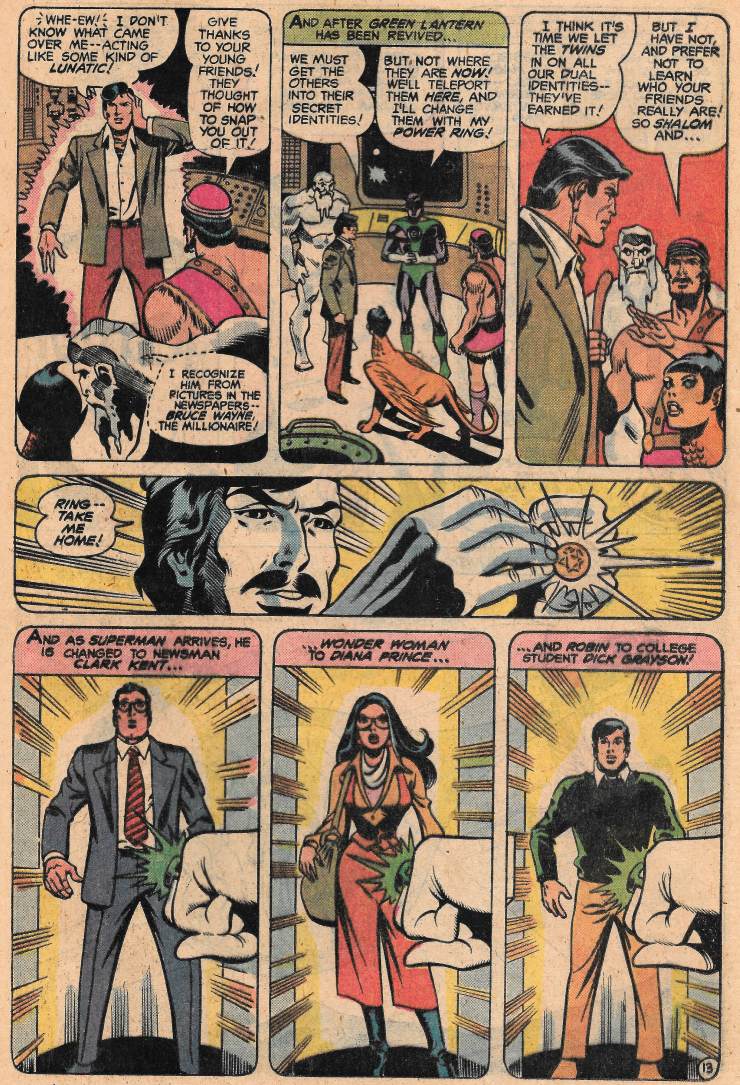 And not only does it work for Bruce, but for the other Super Friends as well. The only problem…is Aquaman.

Technically Arthur Curry is Aquaman, but that’s common knowledge. A plan is put into place to use Wonder Woman’s golden lasso, in her civilian identity, to make Aquaman see the light. The Super Friends take off across the Atlantic, searching for Arthur. 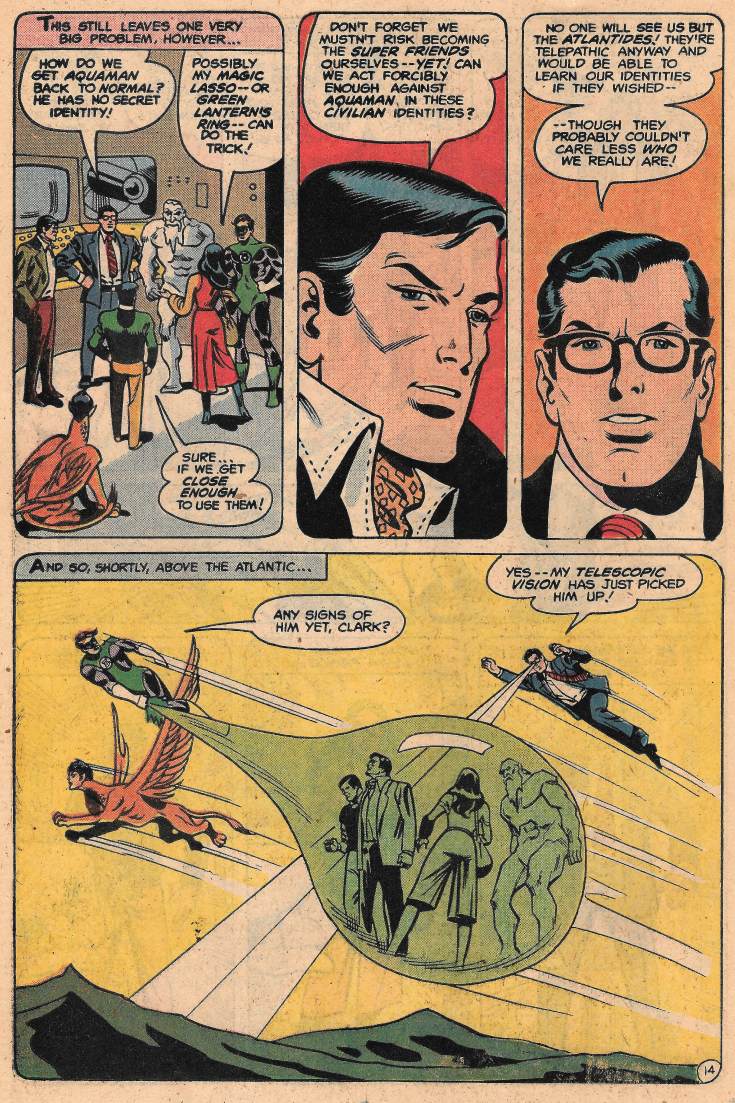 When they locate him, he is leading an army of sea creatures toward shore, and he’s even been thoughtful enough to bring along a chunk of Kryptonite to take out Clark. And he uses his blonde hair to beat Green Lantern. 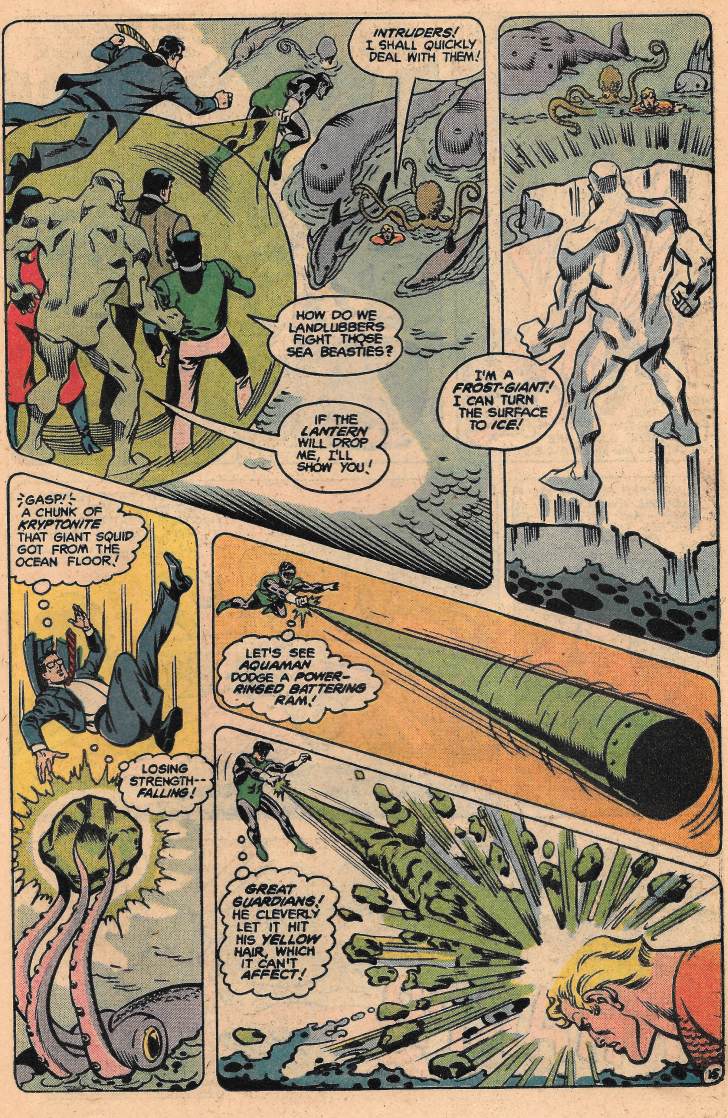 So GL can’t fight anyone with blonde hair in this era? Yeah, that’s pretty lame. Next Aquaman have a school of yellow fish attack Hal.

As for the others, Arthur calls in a pod of whales and flocks of gulls to attack them. Now in the drink, Wonder Woman continues her part of the plan using a mental radio message that I don’t think the character actually has. 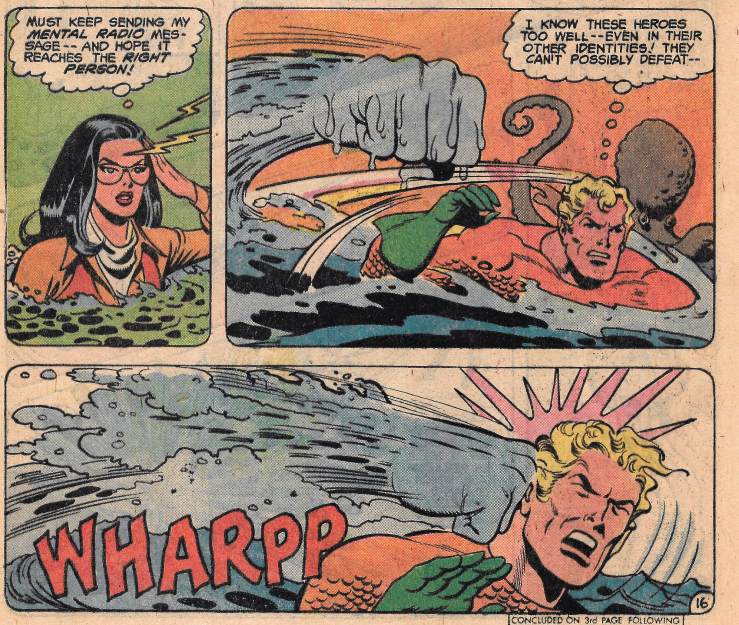 Her efforts pay off, as a giant water fist smacks the heck out of Aquaman when he isn’t looking.

And with that Wonder Woman has her opportunity to “fix” Arthur and everyone is back to being okay. 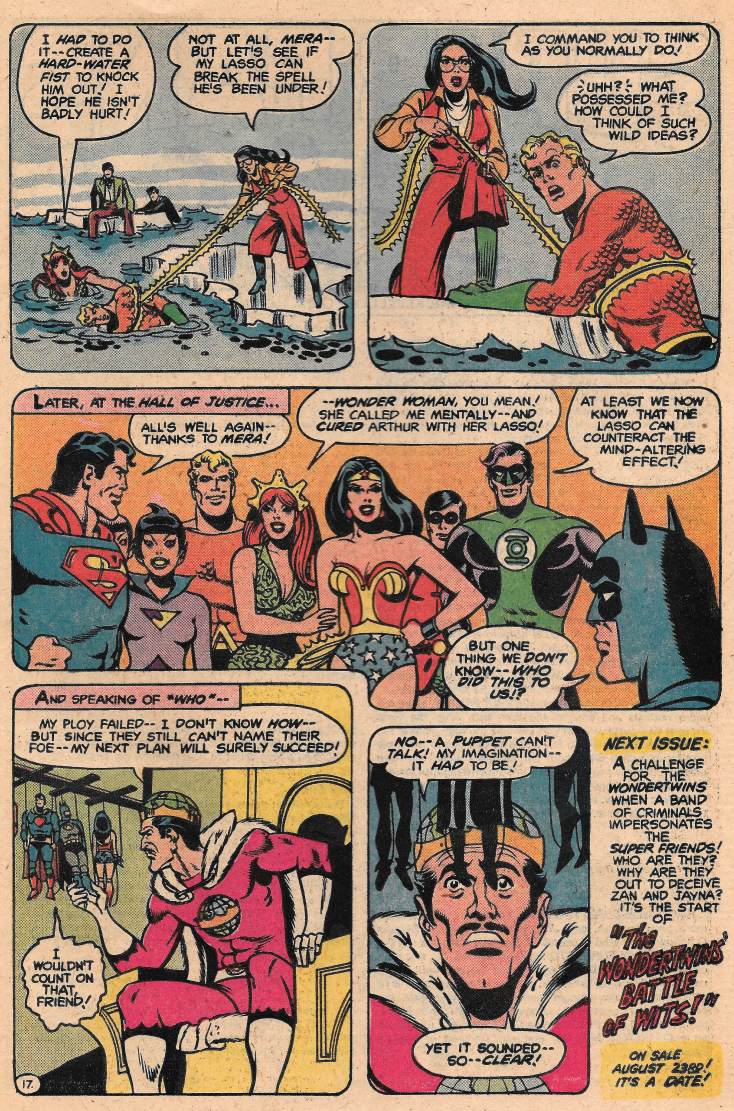 Everyone except the Overlord, who clearly is starting to lose his marbles.

I must say that this issue was better than I expected. There was far more thought put into the story and care with its unwinding. These weren’t gritty JLA books, by any stretch. However, they were far from the Saturday morning kid stuff I remember on the flickering TV tube.
Posted by SonOfCthulhu at 7:46 AM