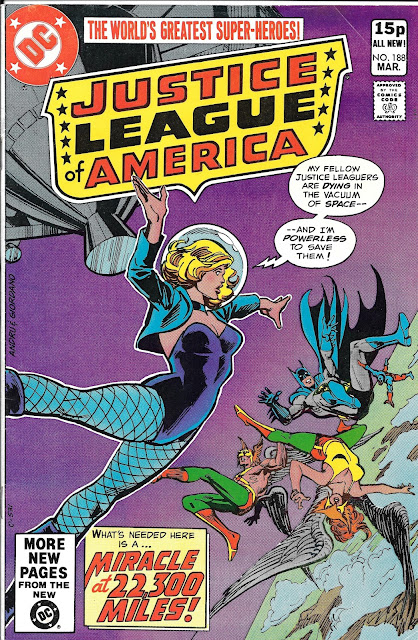 TWO tales! Two different art teams. Count ‘em. The end of issue 187’s story and a new short story. Be sure to check out Professor Alan's Darkness to Light podcast on this issue as well! But there is so much here we need to jump right into things:

You’ll root for the heroes to lose!

This book wandered across the pond somehow, and boy am I glad it did. This was a neat issue, starting off with this odd-ball tale of body snatching, part two of a two part adventure. I’m going to let the narrator sum up: 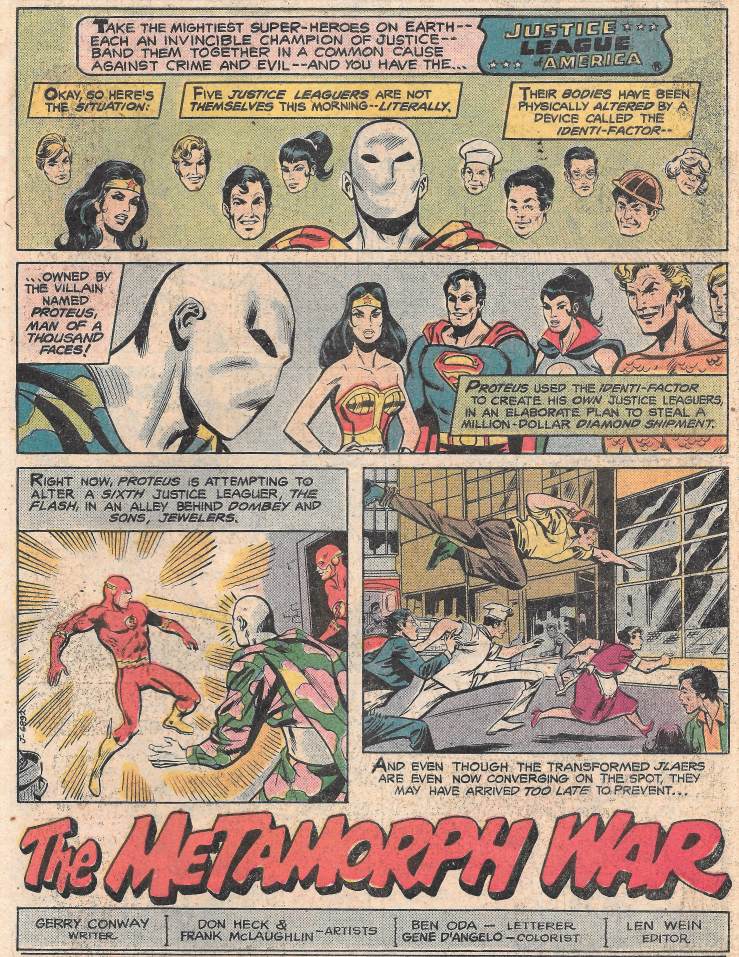 So everyone in the Justice League except the Flash is currently in new bodies, replaced by doppelgangers under the command of Proteus, Man of a Thousand Faces.

Interesting setup and it’s neat that the leaguers still have their powers, but are trapped in other bodies and lives.

Flash is the last guy on Proteus’ list, but he’s no slouch. Proteus goes to zap him with his “Identi-Factor,” but something goes very wrong. 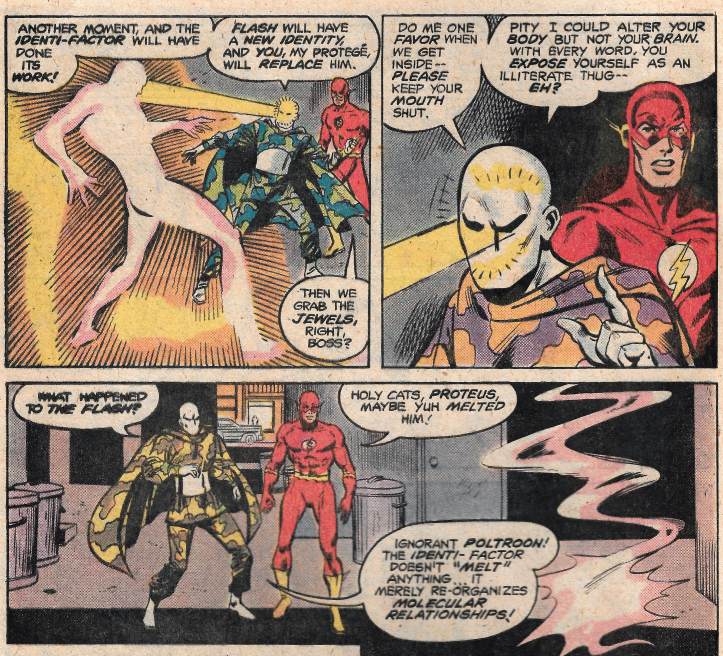 Of course that isn’t what happened at all. Barry simply vibrated into the ground when Proteus turns his back, Flash returns seeking vengeance. 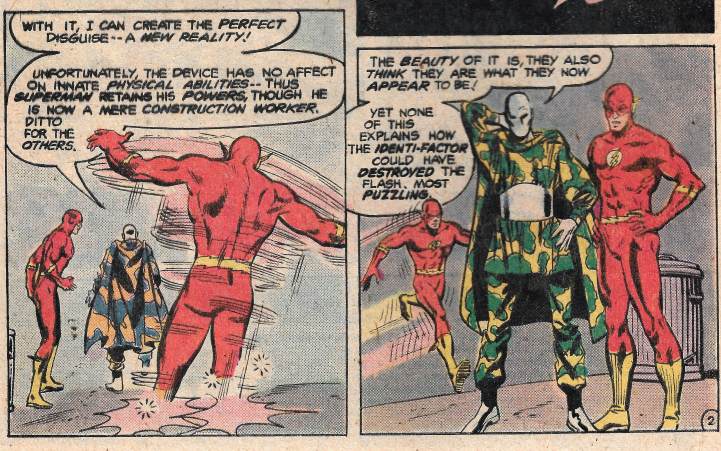 And lays Proteus out flat with one leap. Fighting his doppelganger may prove to be a different subject though. He has Flash’s speed! 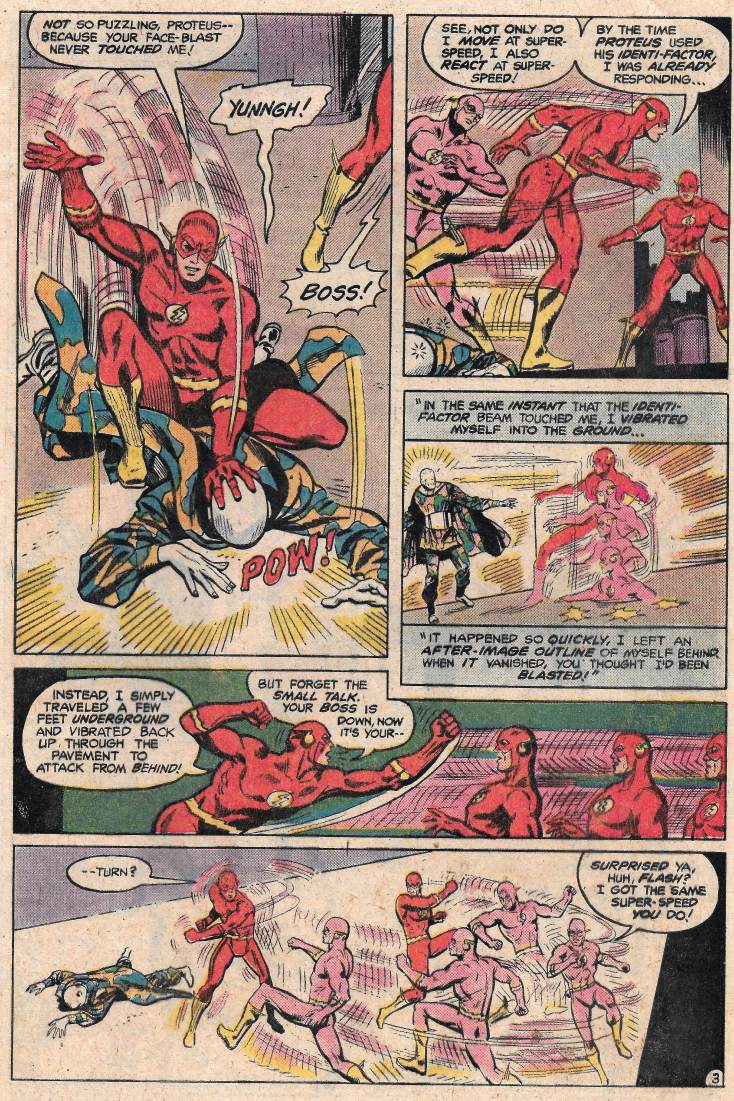 Caught unaware, Flash gets knocked out by luck more than anything. 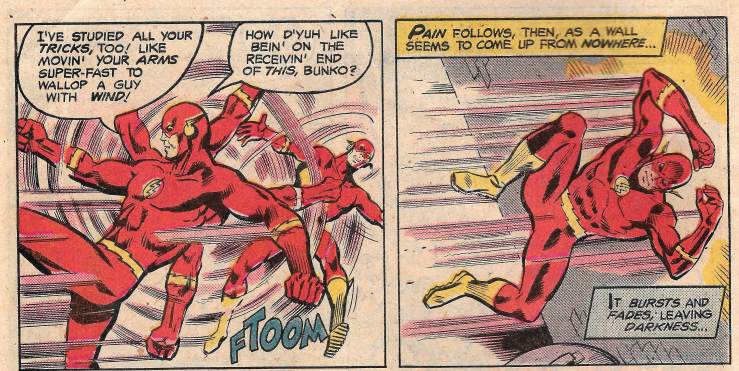 Meanwhile, the other JLA doppelgangers use their powers to rob an upscale jewelry store. 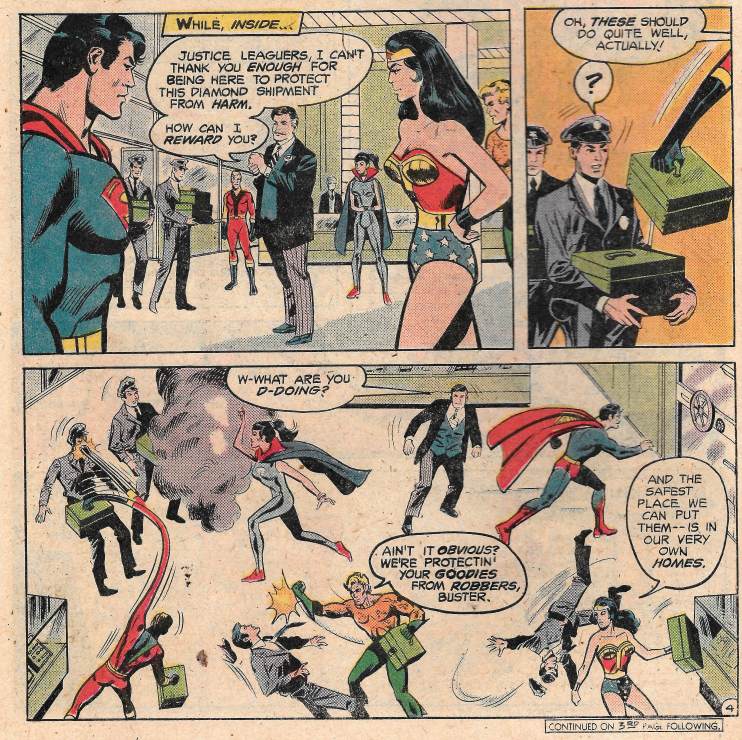 Superman yanks off the vault door even. The other collect the loot and deal with the guards, but as soon as they start to skedaddle… 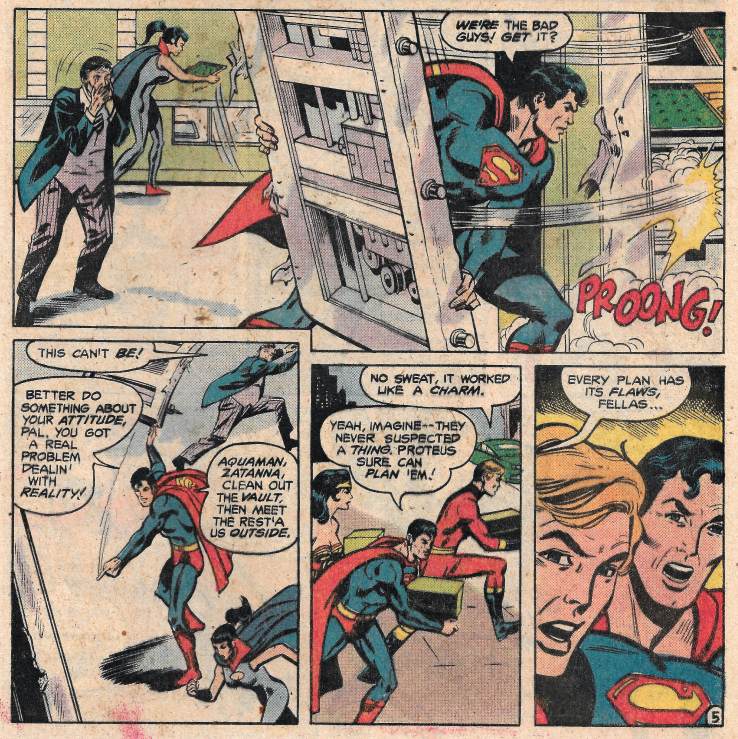 …They are confronted by THE LEAGUE OF RANDOM CITIZENS! Er, I mean The Justice League…sort of.

They look like a tribute band for the Village People. Do “YMCA” guys!

Now we get into silly fight scenes of Aquaman being a waitress and talking Superman’s imposter, Wonder Woman as a guy out doing her imposter, and a baker and imposter Elongated Man in a stretching contest. 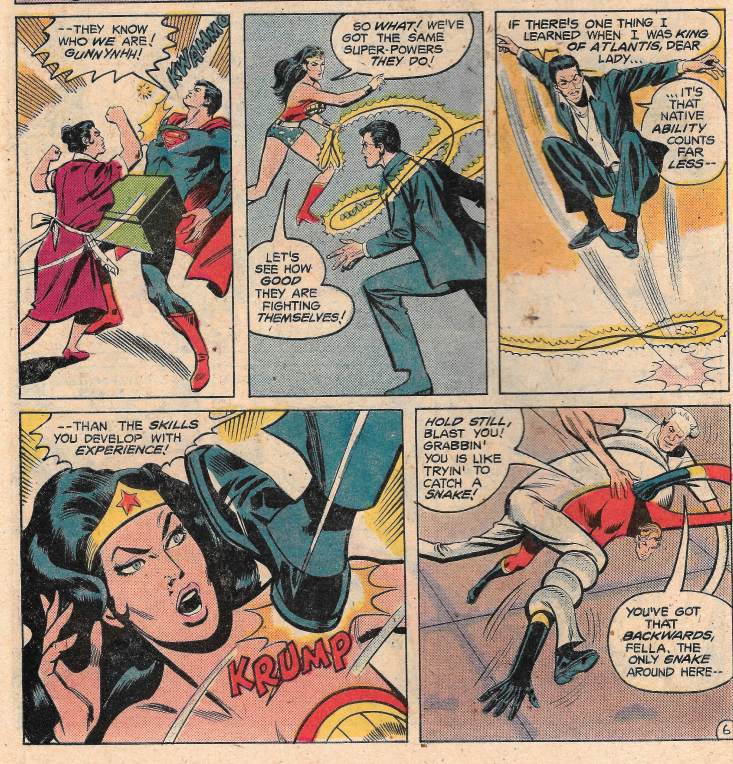 It isn’t long until Ralph uncovers the secret, these heroes are using technology to mimic the JLA’s powers. From there it goes downhill for the villains. Construction worker takes out phony Superman. 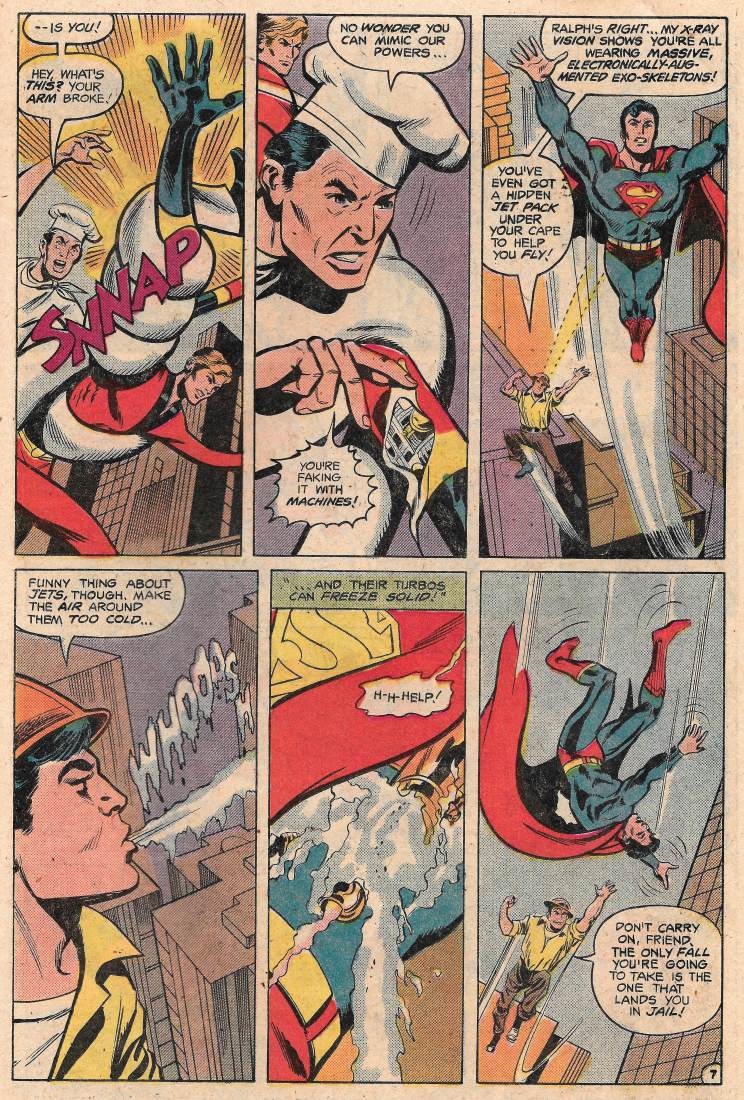 Fake Aquaman and Zatanna try to sneak out, but the real Flash shows up dragging Proteus along with him and quickly takes down the imitation good guys. 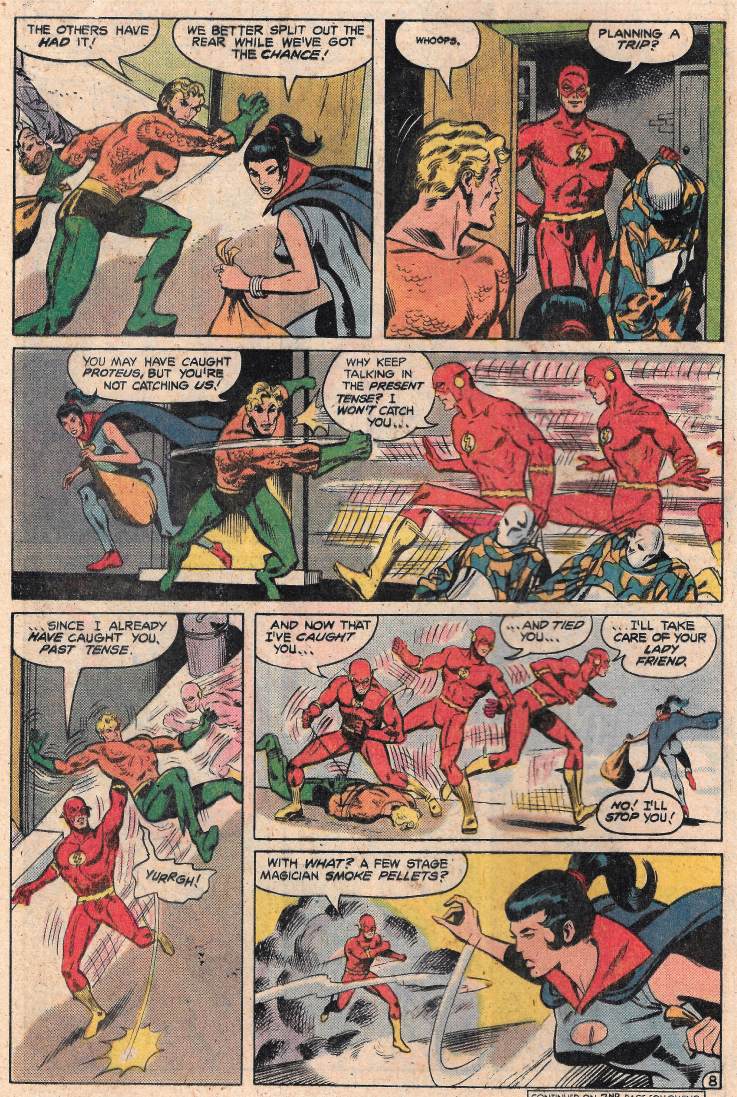 Sadly, it appears that Proteus has some bad news for Flash. The Identi-Factor is damaged beyond repair and that means he can’t change the Justice League back. Flash realizes that the real Zatanna is the key to fixing this and rushes off to find her. She is one of the few leaguers that didn’t realize who she was. 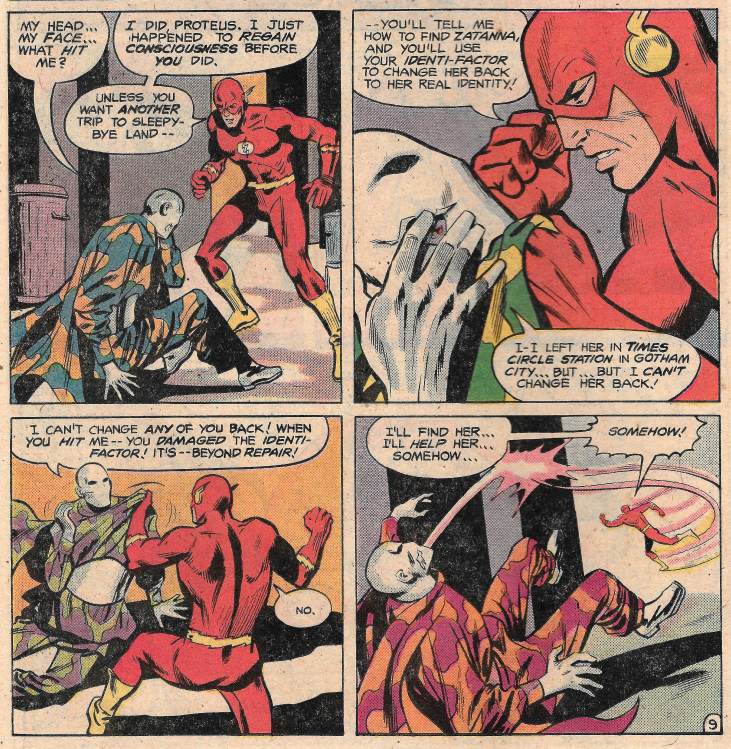 Meanwhile the other leaguers round up the fake bad guys and take them to jail, including the Flash-that-never-was.

While the real Flash finds Zatanna in a subway tunnel. He uses information she’s shared with him to jolt her back to her senses and she undoes the Identi-Factor’s meddling. They leave on an almost romantic note to return their friends to themselves as well. 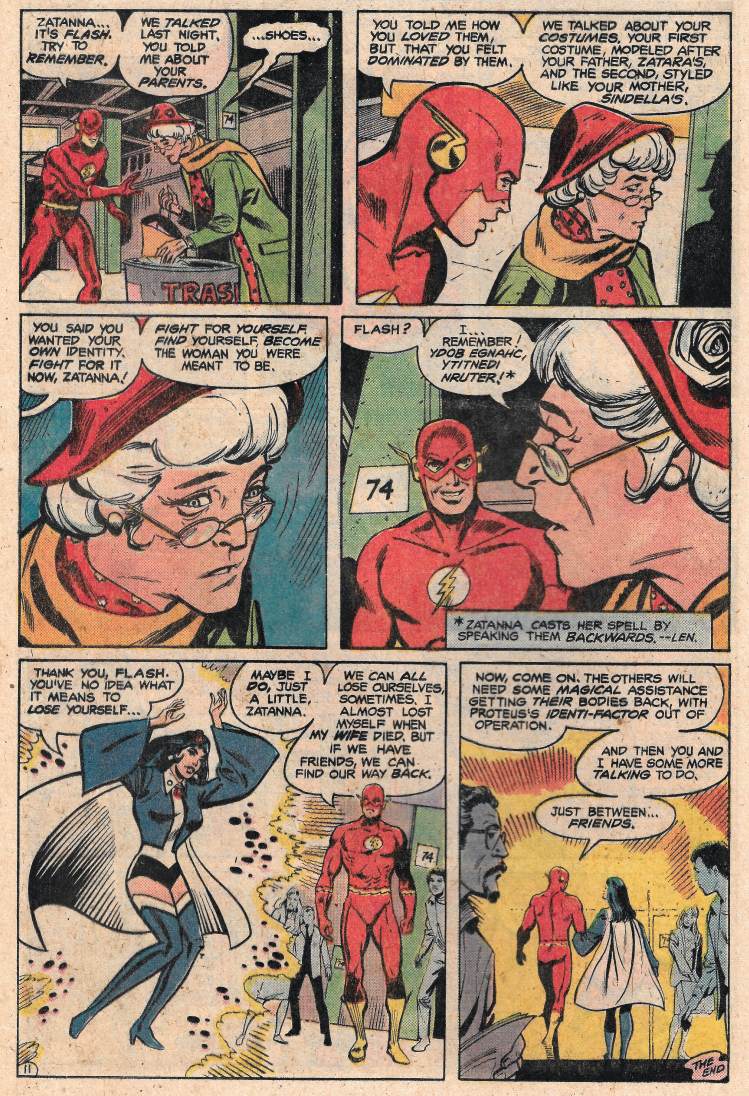 That was a bunch of fun for the first eleven pages. I enjoyed the puzzle of figuring out how these other people had the Justice League’s powers and the final reveal. It was neat to root for the heroes to lose, in a way and the ending of the tale was very sweet. I never knew Barry and Zee had any kind of connection, even if it was just for these two stories. Heck’s art looked good and the story was enjoyable.

…or how Atom became Jewish

One tale down and I’ve already got my enjoyment level satisfied. We turn to the back story, a short tale with Rich Buckler pencils that starts off looking very good. Love that Hawkman and Hawkwoman. Let’s see if he can maintain it. 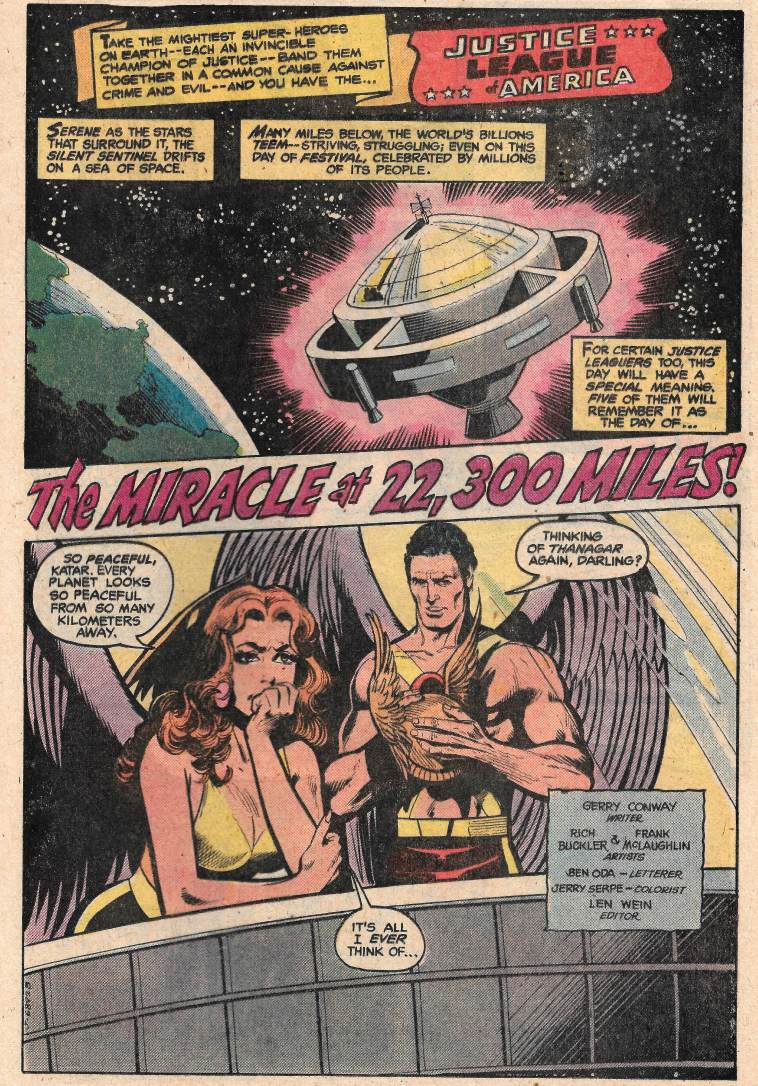 In fact it gets better. We have Shayera and Katar sharing an honest moment of reflection, something humanizing and character building. This is one of the quieter JLA tales with a little action sprinkled in, and I’m loving it too. 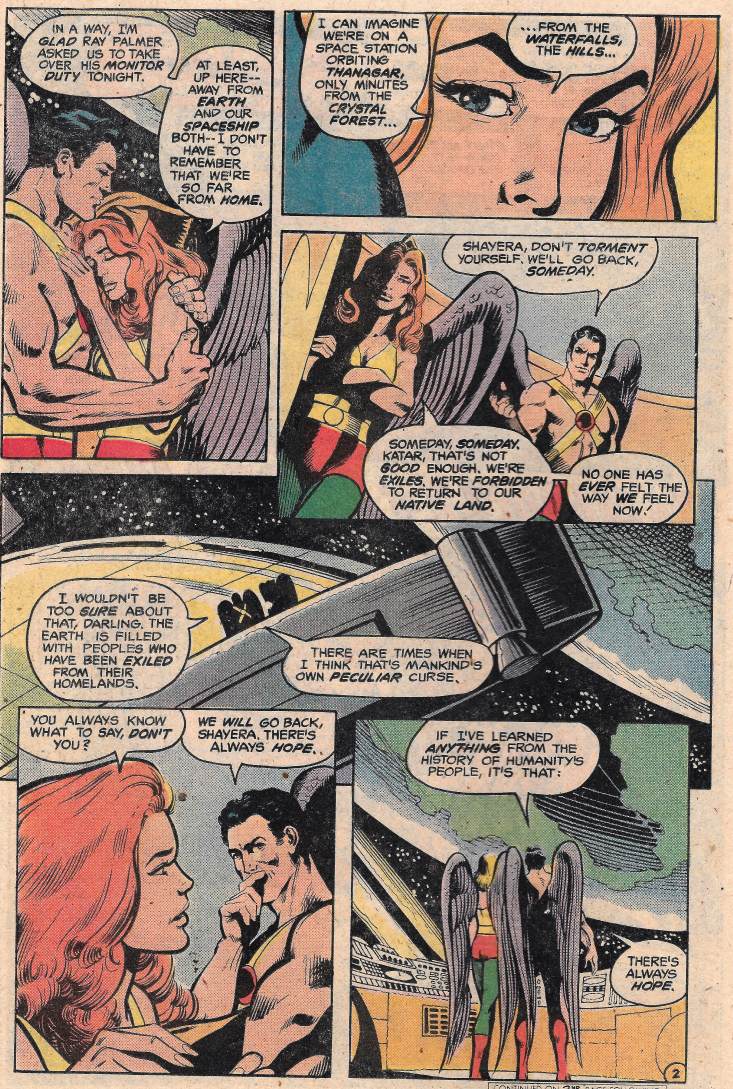 But tales with NO action wouldn’t come along until Giffen’s JL book, so we have this pink satellite inching closer to the JLA headquarters and it is just bristling with weapons. Pink ones. Like some kind of “Barbie’s Death Star” or something. 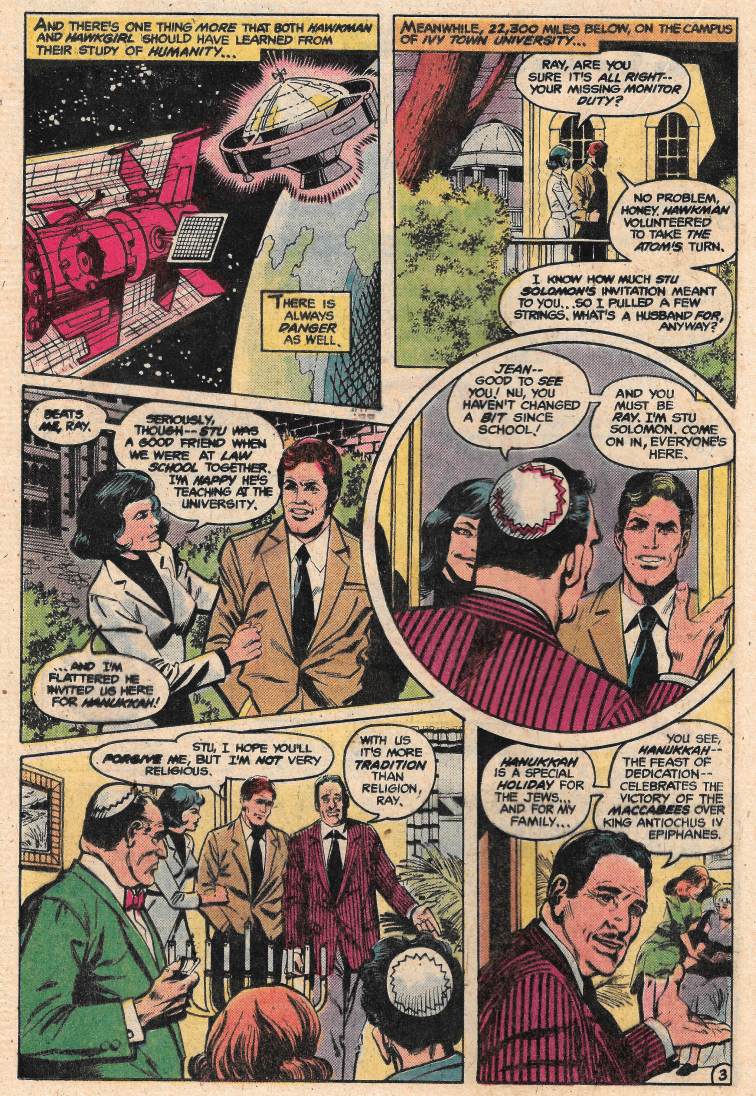 Anyway, also we get Ray Palmer (Atom) dropping in on some Jewish friends with crazy old Jean. Sure hope she doesn’t take a flame thrower to them later.

Ha-ha-ha! That joke always kills me. And you know who also dies? Anyone she hits with a flame thrower.

Okay, seriously now: the book wanders into the realm of religious education for a bit. 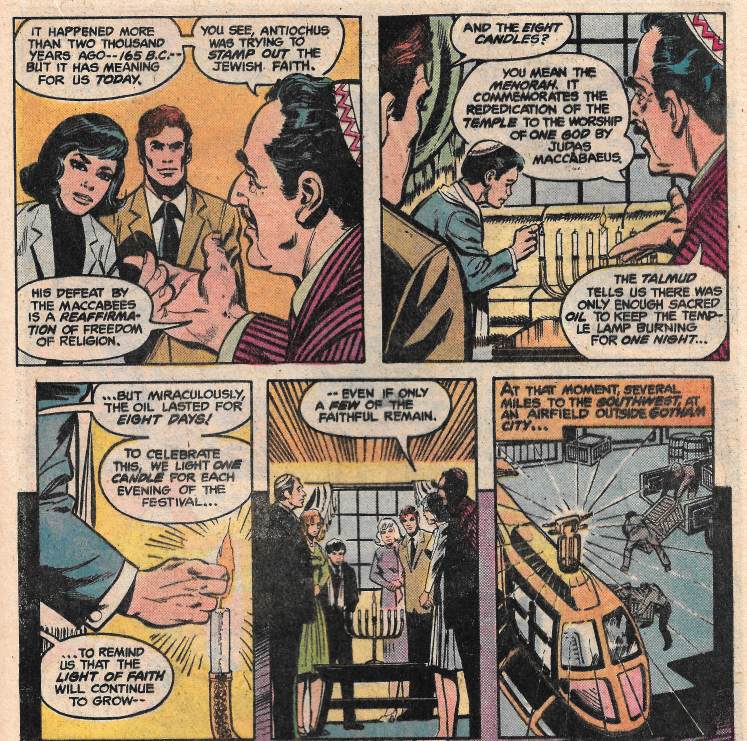 By the by, Hanukkah comes up December 12, 2017, in case you were wondering when to wish your Jewish friends a happy Hanukkah this year.

While the Atom is getting his dose of religious education, the thugs are making off with some stolen loot… 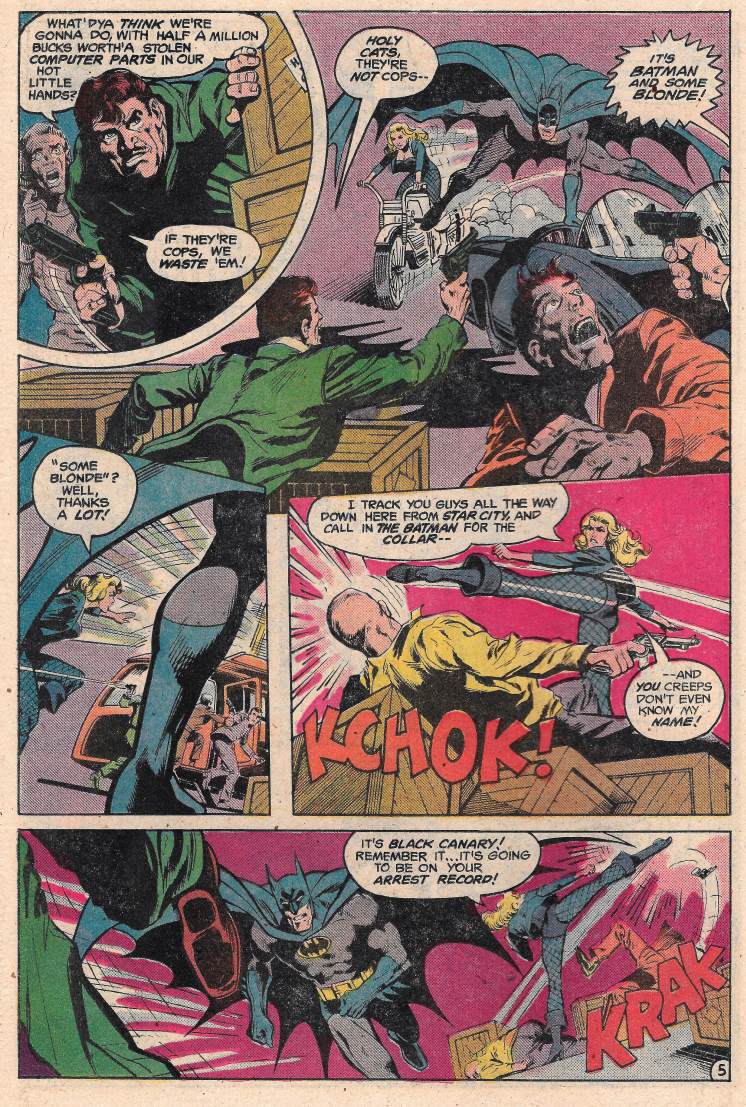 Buckler really shows some chops here. And some kicks. His stuff feels like a blend between Aparo and Adams, which isn’t a bad place to be.

Batman and Canary finish off the bad guys… 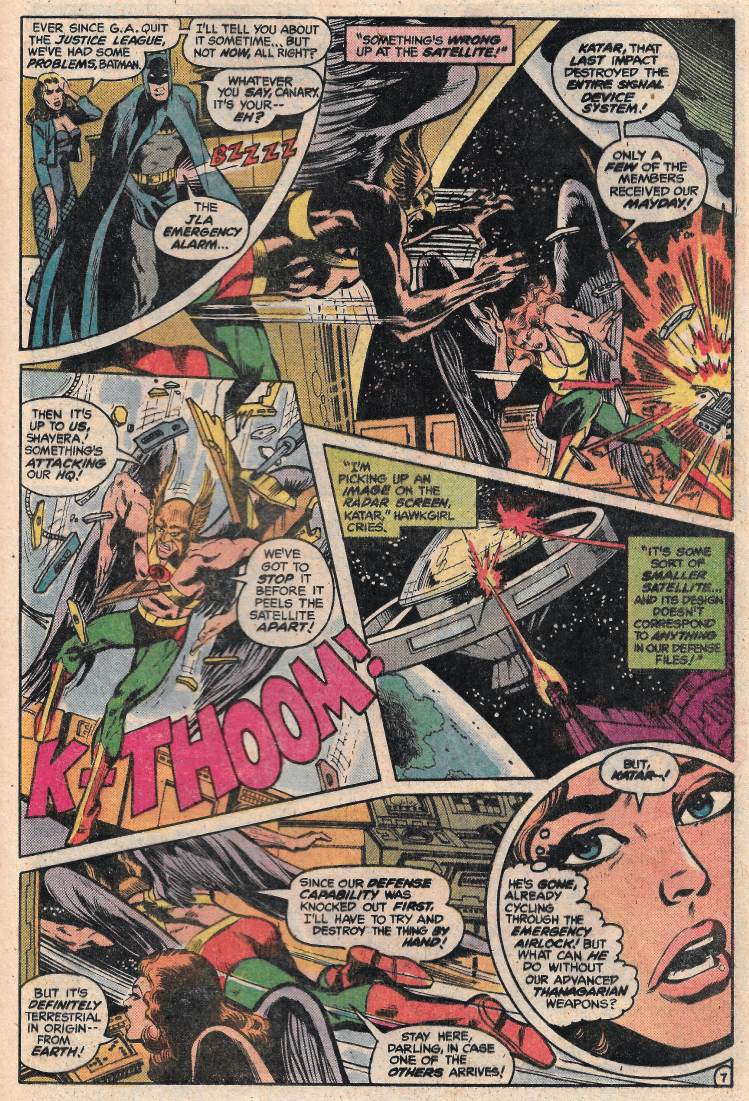 …at the same moment the JLA’s floating headquarters it attacked by the pretty-pretty death rays of the unmanned floating pink death station. It automatically triggers their communicator’s emergency alarm, as in space Hawkman rushes out to take on the floating enemy “dream house” of death.

Katar moves into position to disable the deadly version of Skylab, but he is injured in the attempt. Buckler’s pencils make it impossible to cut any of these pages, not just because of the panel shapes, but also because the inventive layouts are a big part of what makes the art look so good. It is non-standard and exciting. 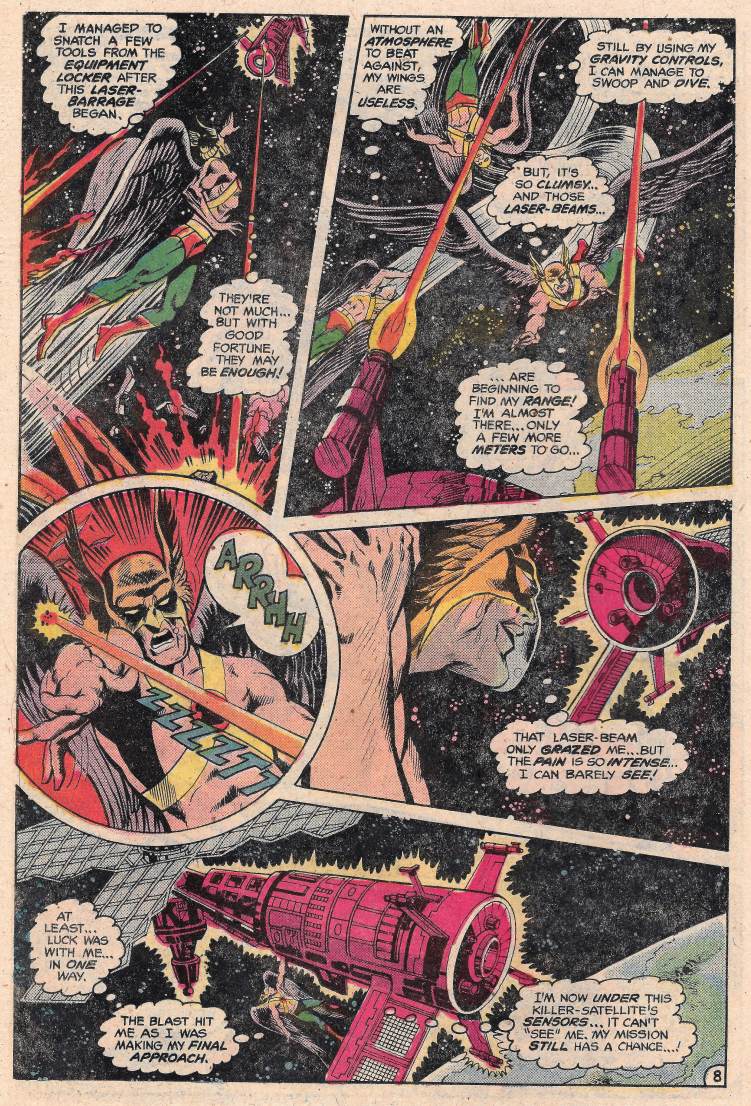 Batman, Canary, and Atom teleport up to the station just as everything blows to crap, trapping everyone in an Apollo 13/Gravity with Superheroes-type story. Now they are marooned in space. 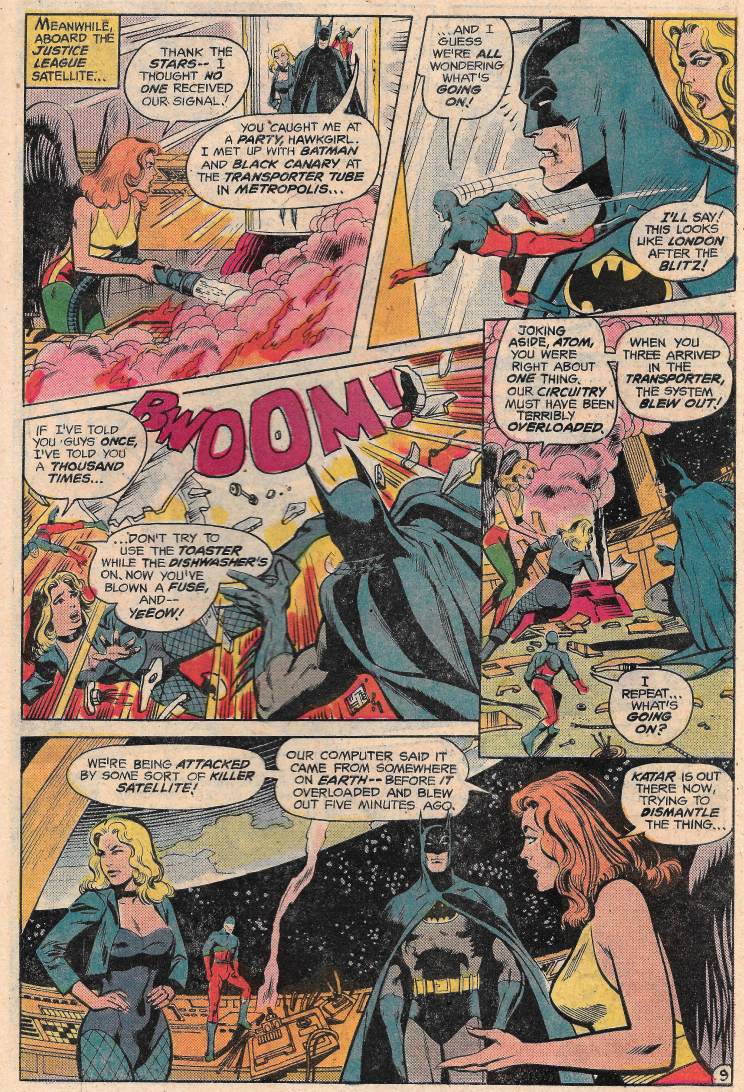 Katar takes out the satellite using his bare hands, but suffers a knockout blow in the process. The rest of the team discovers they have no working life support systems, meaning if they don’t work fast, they will suffer a slow suffocating death. The hassles of putting your super-secret headquarters in space. 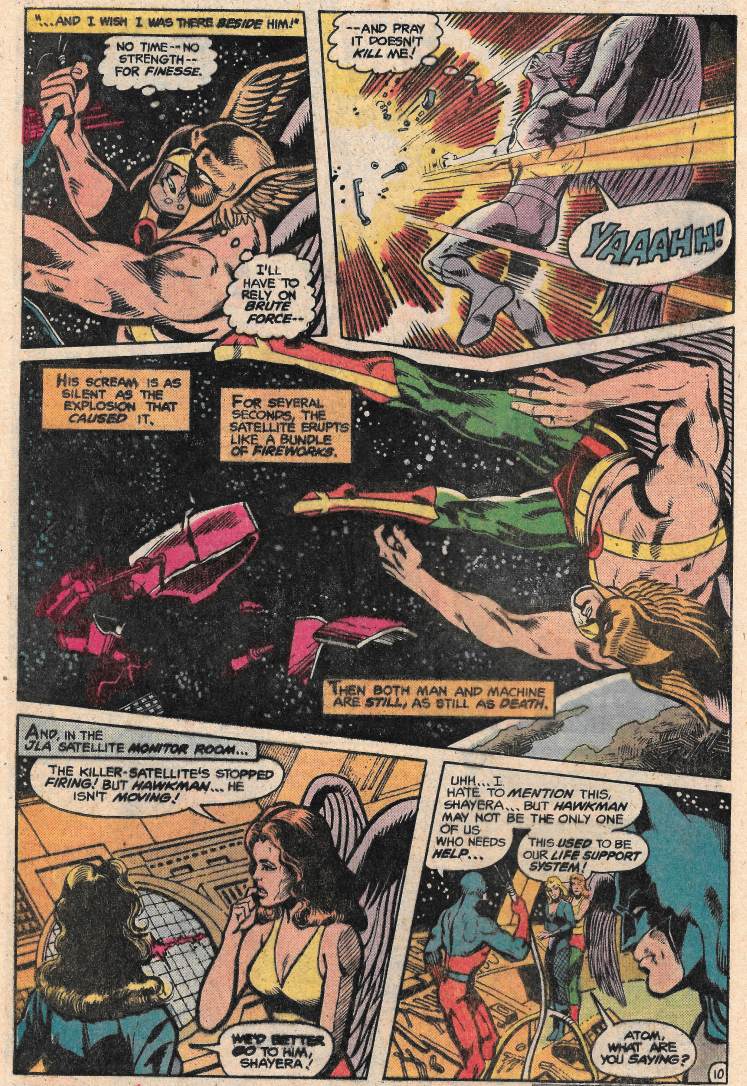 More bad news as they find only one working spacesuit (Canary has dibs on it too) and one E.V.A. Jet-Sled, but no working life boats. Seems the JLA satellite designers bear a striking resemblance to the guy that made the Titanic. 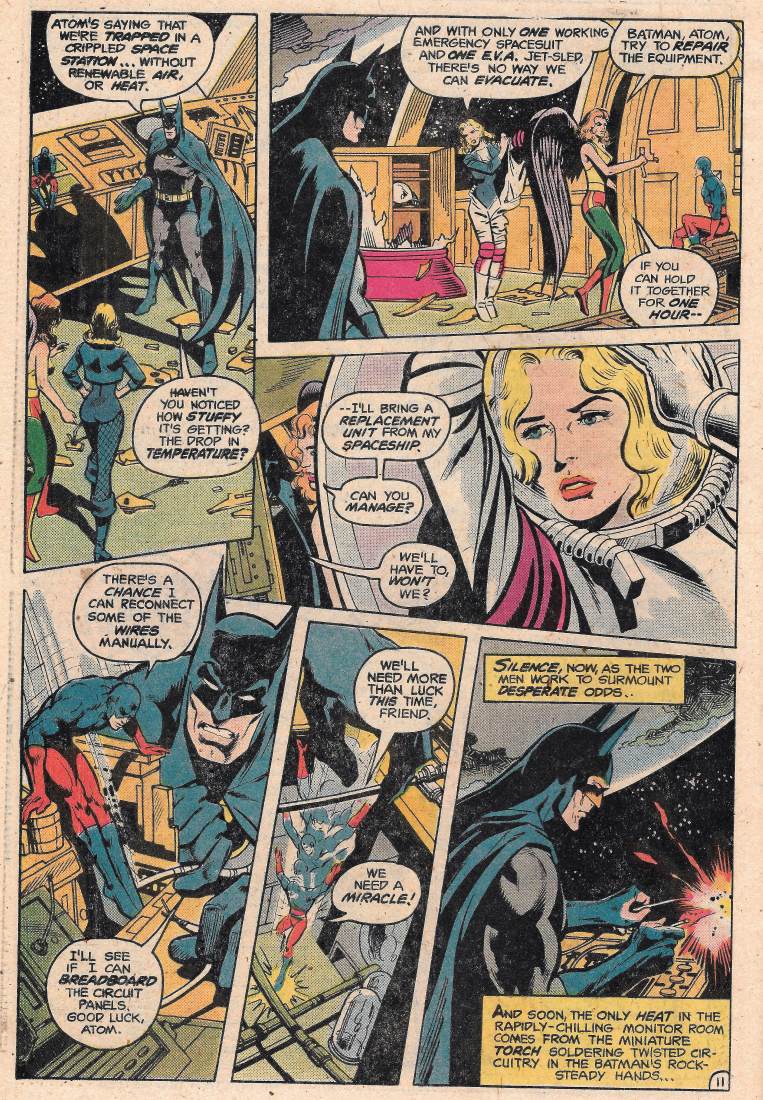 Shayara goes EVA to reach her spaceship on the other side of the PLANET and bring back needed equipment, while Canary brings in Katar’s unmoving body. GREAT art in this. The more I go back through it, the better I appreciate it. 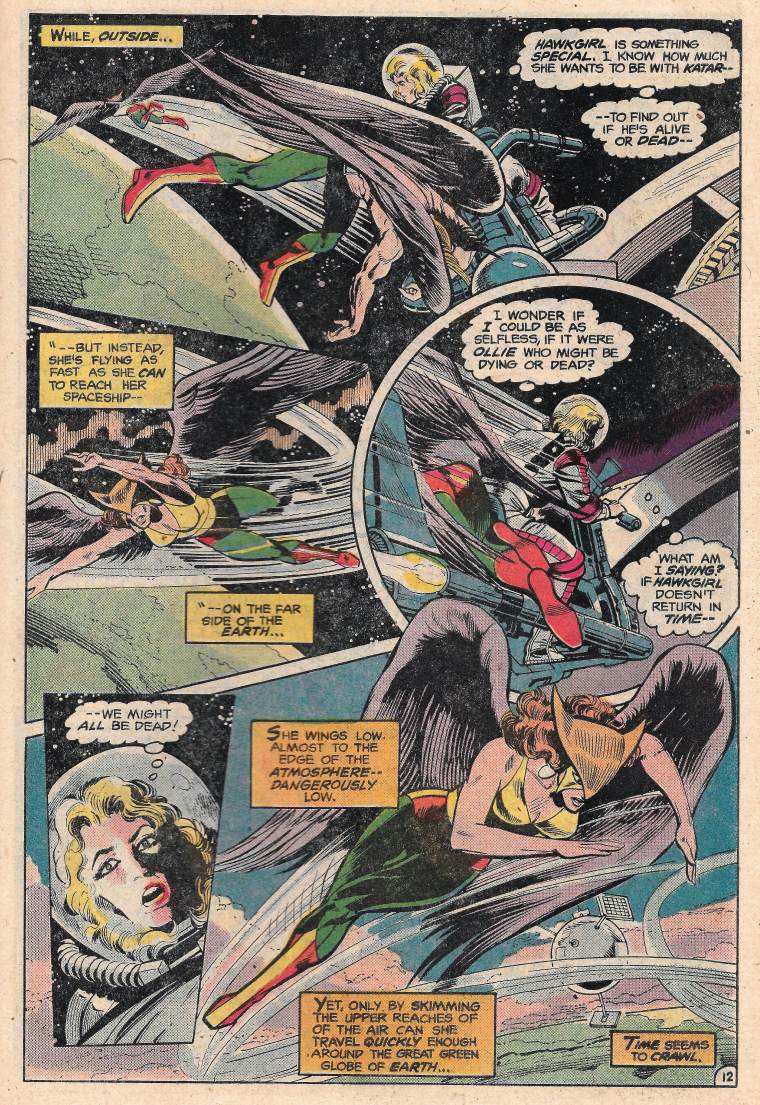 At the last moment, Atom fixes a circuit and then blacks out. The station limps along a bit more… 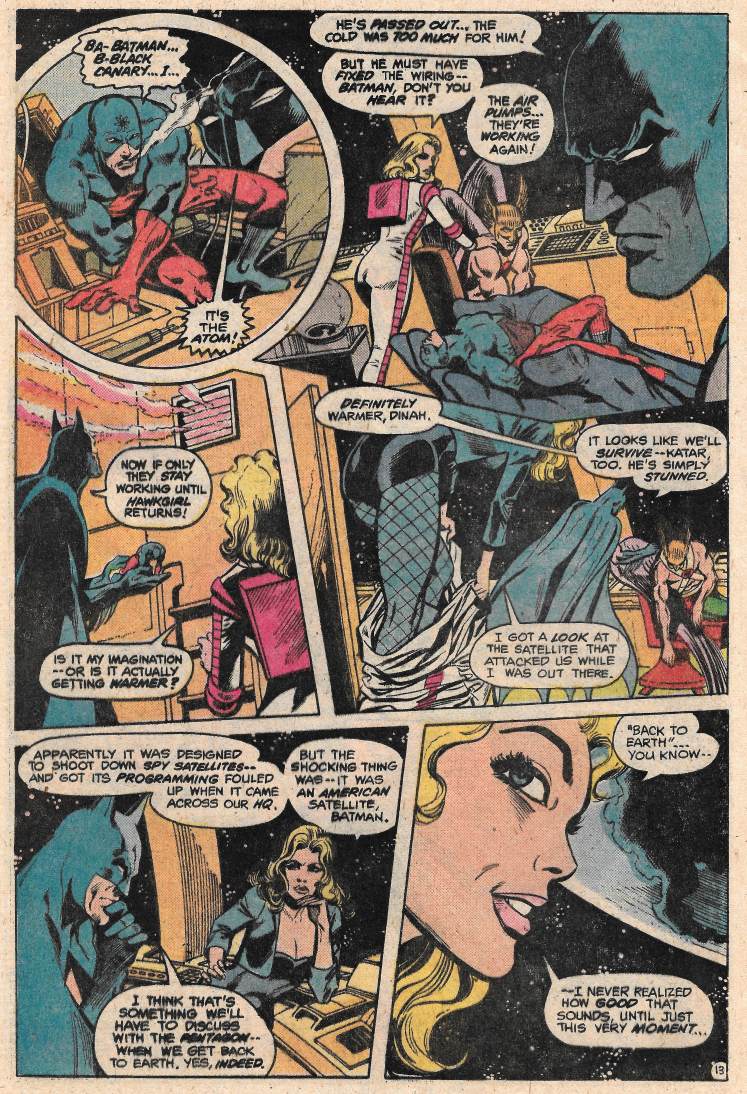 …enough for Hawkwoman to make it back… HOWEVER, Ray wakes up to explain he didn’t fix anything at all and to mirror their miraculous survival to that of the Maccabees. 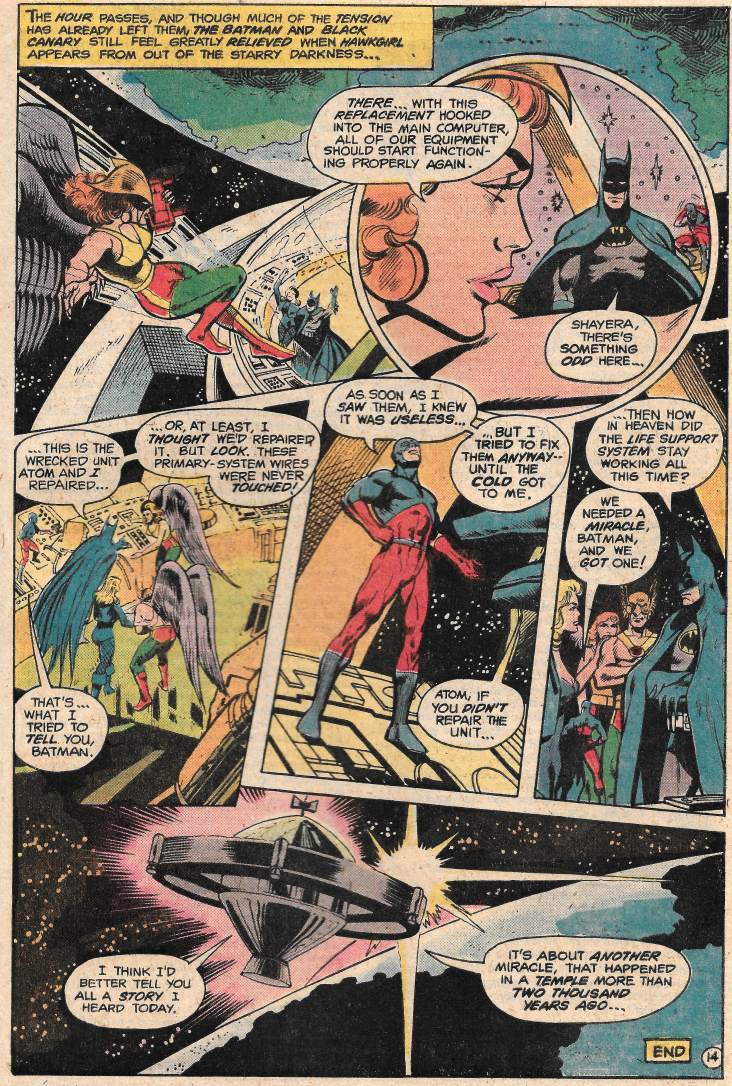 That’s an odd ending, to bring a religious overtone to the story in DC universe. I still love it for the Hawkman/Hawkwoman parts and the wonderful art. This one is a keeper.

In all a great issue. I have no idea why it is a British import or where it came from. Nor do I know how that affects pricing as a comic. I’m just glad it was in the Crapbox. Sort of like my own little “miracle” you might say.
Posted by SonOfCthulhu at 4:30 AM