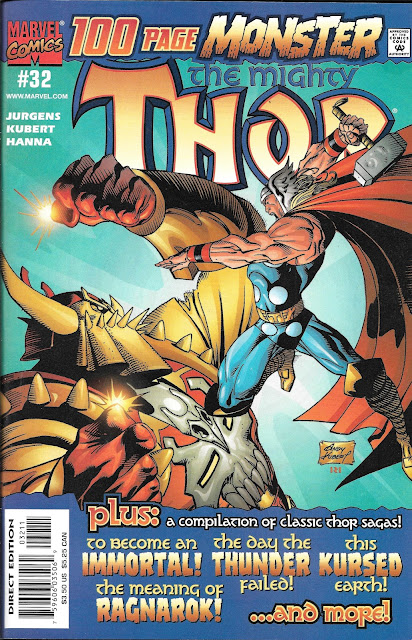 100 PAGES!
If you think I’m reviewing all of this one, you’re crazy

I don’t know what Marvel was drinking in my birth month circa 2001, but I wish they did it more often. It’s like they knew years of decompressed storytelling was on its way and they tried to make up for it in one issue of Thor.

This is a serious issue, folks.

There are four complete comics in this, one new and three classic. Also two Tales of Asgard “shorts.” And the price for all these pages? $3.50.

I mean, you should sit down when you say that because DAMN. Sure these are mostly reprints, but the eras are so removed from one another, it is unlikely that a majority of the audience has seen ALL of these stories.

But we are here about the new movie and tie-ins and getting people excited and stuff! Not about telephone book glimpses into Thor’s world. So, one of these tales will be a lucky winner of a review.

Not this first 22 page original story “Forever Kursed” which features Malekith and Kurse, the villains from Thor: The Dark World. Although the art from Andy Kubert is nice and Dan Jurgens spins an entertaining tale, if feels like we’ve been here before with these two characters and Thor…and done better even, perhaps. 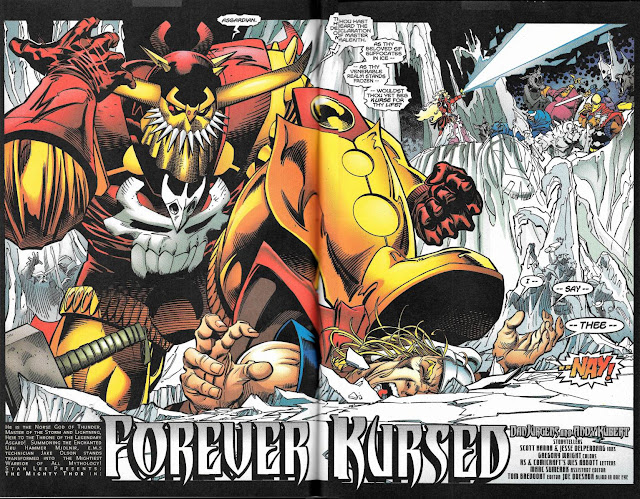 Okay then if not that tale, what of this classic Lee-Kirby era yarn called “To Become an Immortal!” which when viewed by today’s audiences is sure to get a laugh. 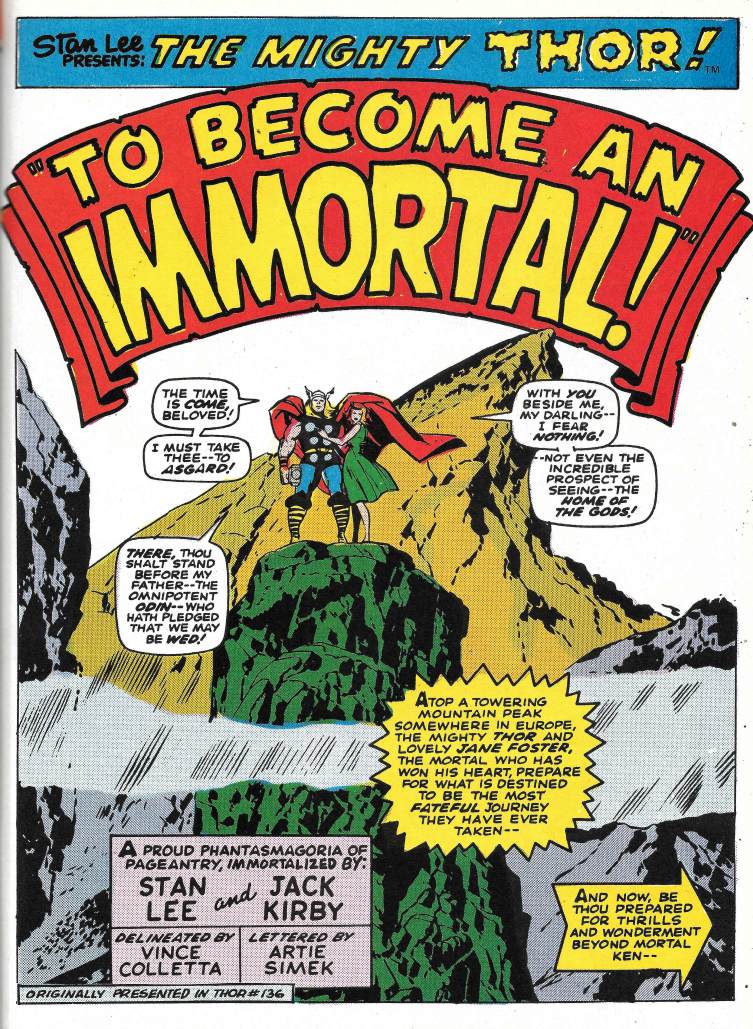 For you see, in it Thor takes Jane Foster (Natalie Portman, in the movies) to Asgard via the Bifrost… 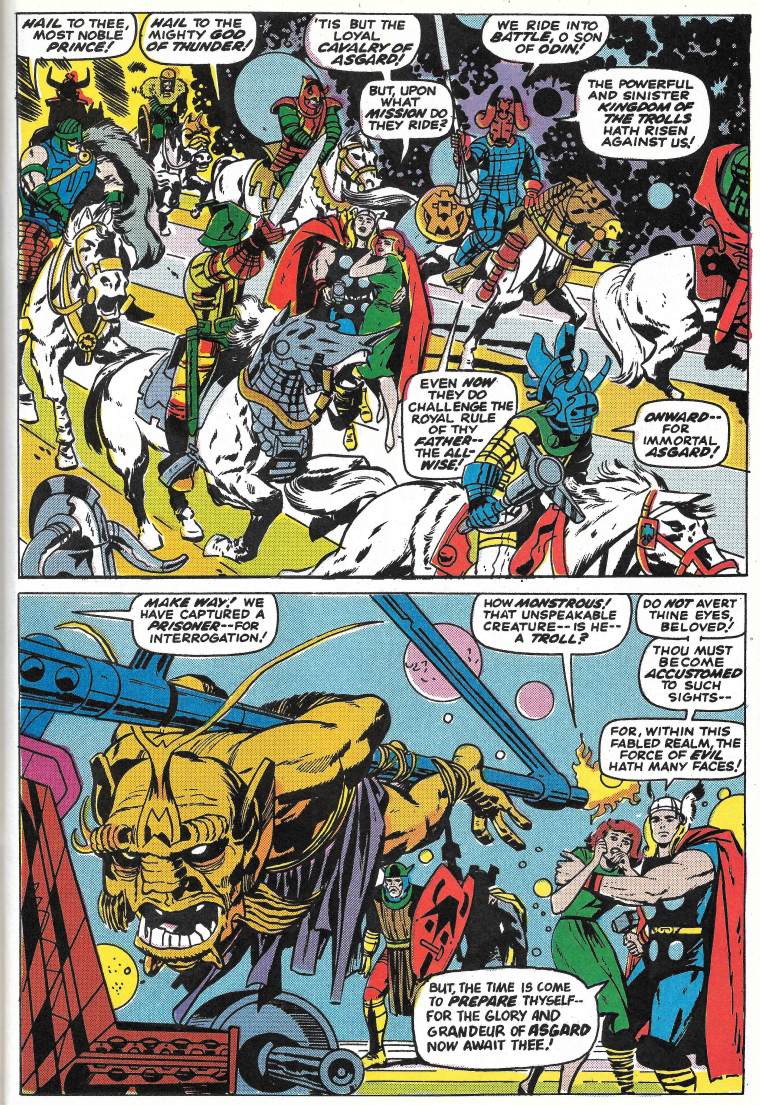 …and it freaks her the heck out! Once they stand before the All Father Odin, he bestows upon Jane a gift because she is Thor's beloved. 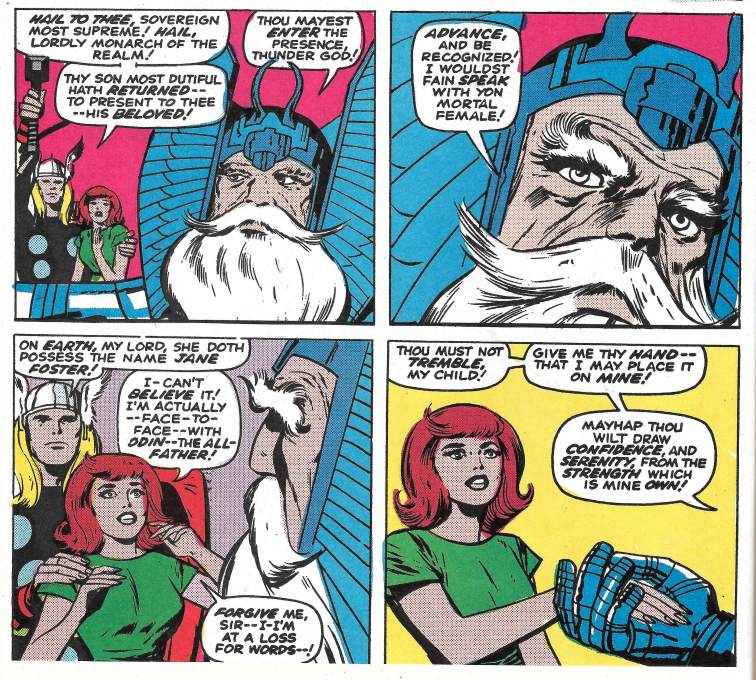 …a gift which turns Jane into a goddess with the powers of an Asgardian. 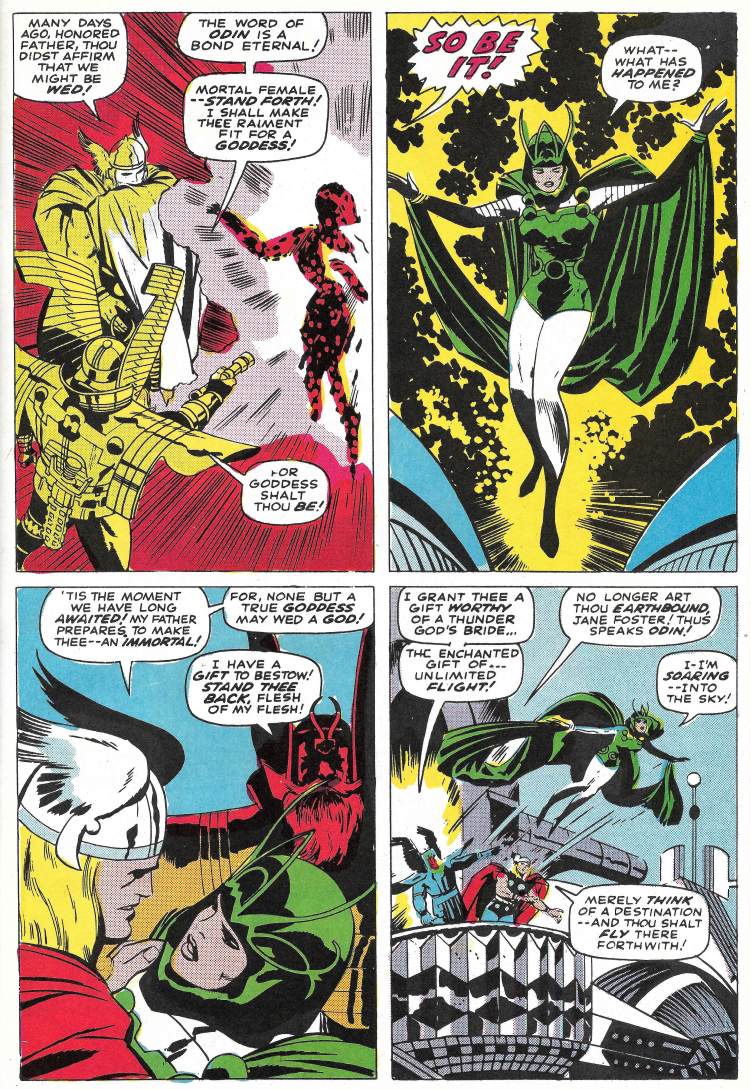 Which she has for about ten seconds before she freaks out and forgets how to fly while in mid-flight. Then she fails a test where she has to punch a multi-armed monster to prove she has the mettle to be a god. Thor has to jump in and help her, which leads to this: 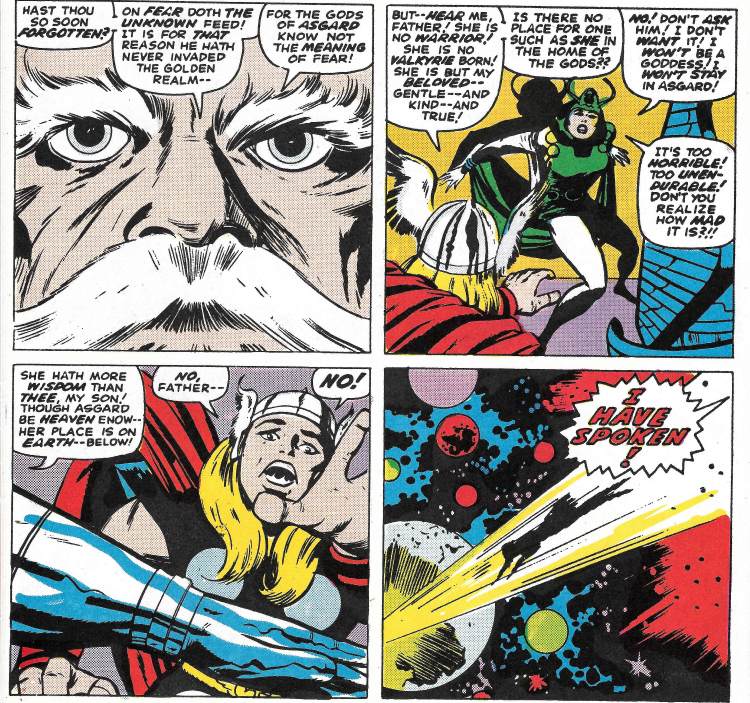 And Jane is seen with a new guy in the VERY NEXT PANEL. A nice man. A dentist. And Thor moves on to Sif.

I find that so funny given Jane is the current God of Thunder in the Thor books at this time. It’s like they aren’t even the same person.

But NO, it isn’t that story either. Perhaps it is this one? 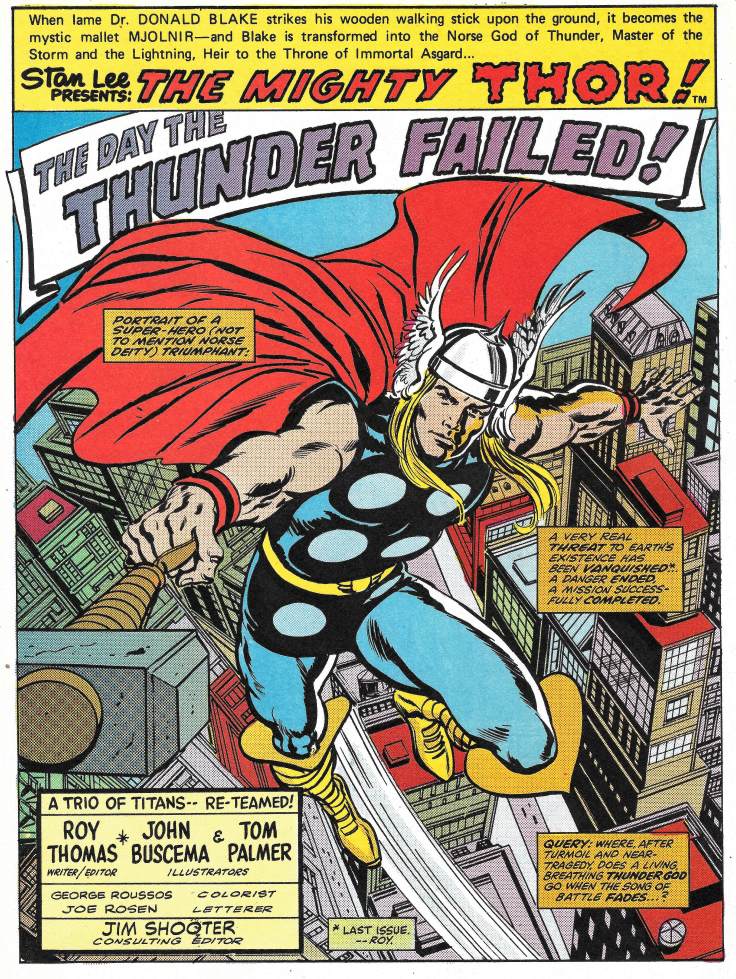 “The Day the Thunder Failed!” is a great Roy Thomas tale with classic Buscema-Palmer art that has Thor telling some youths about facing up to bullies even when they are bigger and stronger than you.

Still! Not the one. Nope.

Okay then, what about “This Kursed Earth…!” the culmination of a large part of the Malekith arc from Walt Simonson’s epic masterpiece of a Thor saga? It’s got everyone from Power Pack to the Beyonder making appearances. How about it? 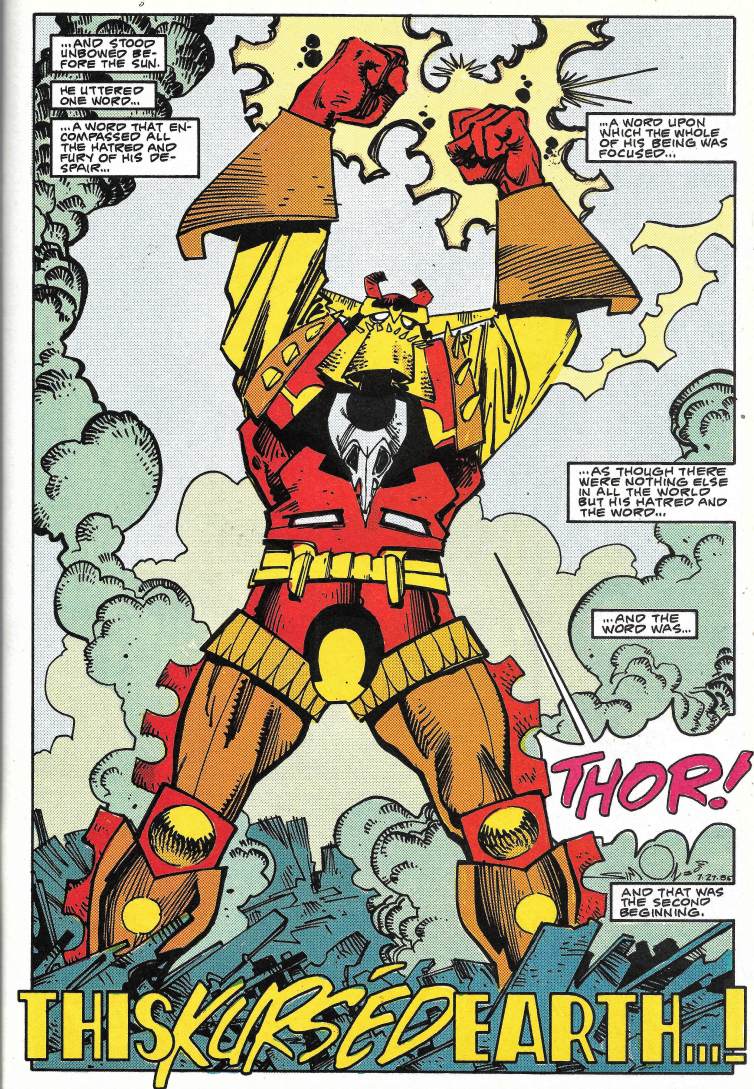 Alas, no. Again that’s treading on Dark World territory and where we are headed is forward.

Forward to the silver-age tale “The Meaning of RAGNAROK!” 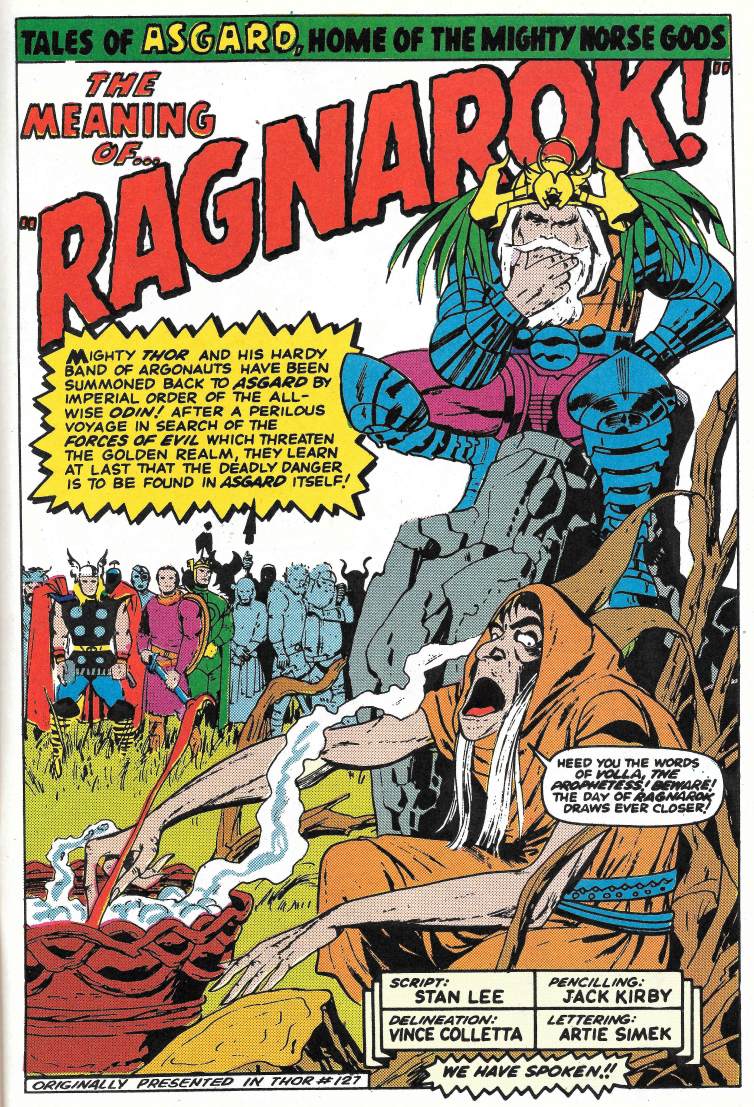 For the first time I really see how botched Vince Colletta’s inks are. There are several panels in here that needed a lite touch and received either no subtlety at all or no ink. It was truly feast or famine.

To the good we have a story where Thor, Loki, and Balder? Is that Balder? have been summoned back to Odin’s side to hear the words of Volla, the Prophetess, who is going to explain THE THING THAT WAS SAID IN THE TITLE! 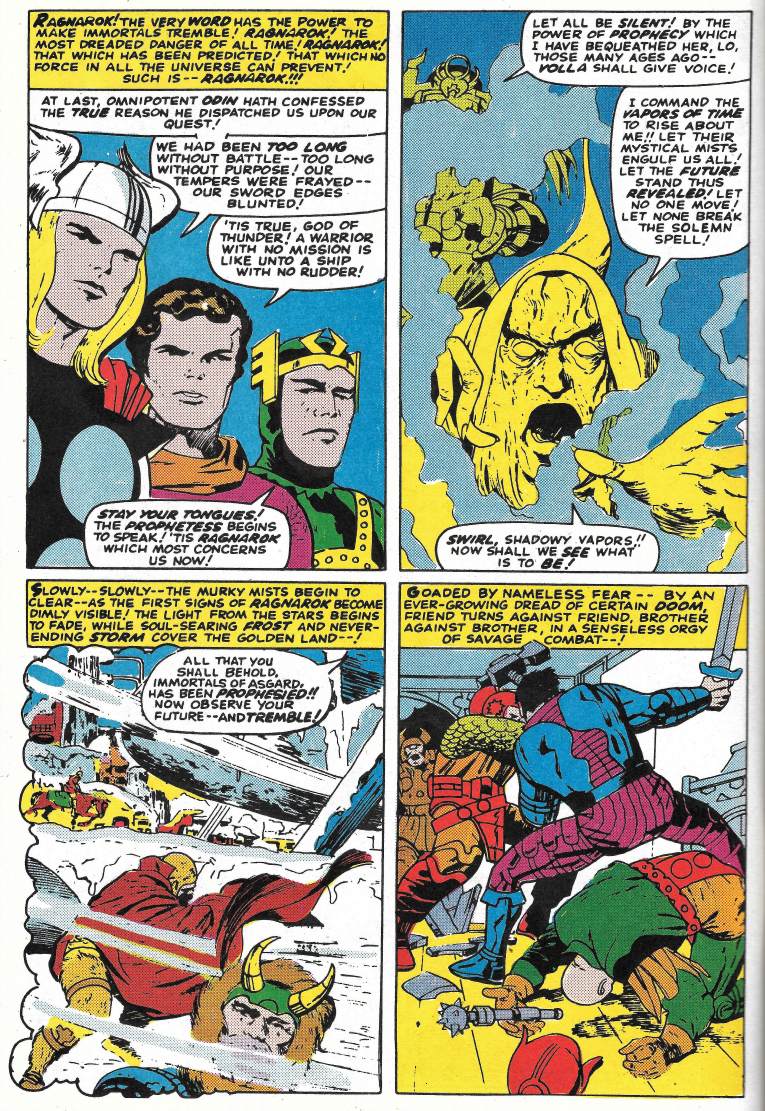 So from her smoky visions, we make out that Ragnarok will begin with a horrible winter the produces a nameless fear driving all of Asgard mad. As anarchy and chaos descend upon the gods themselves… 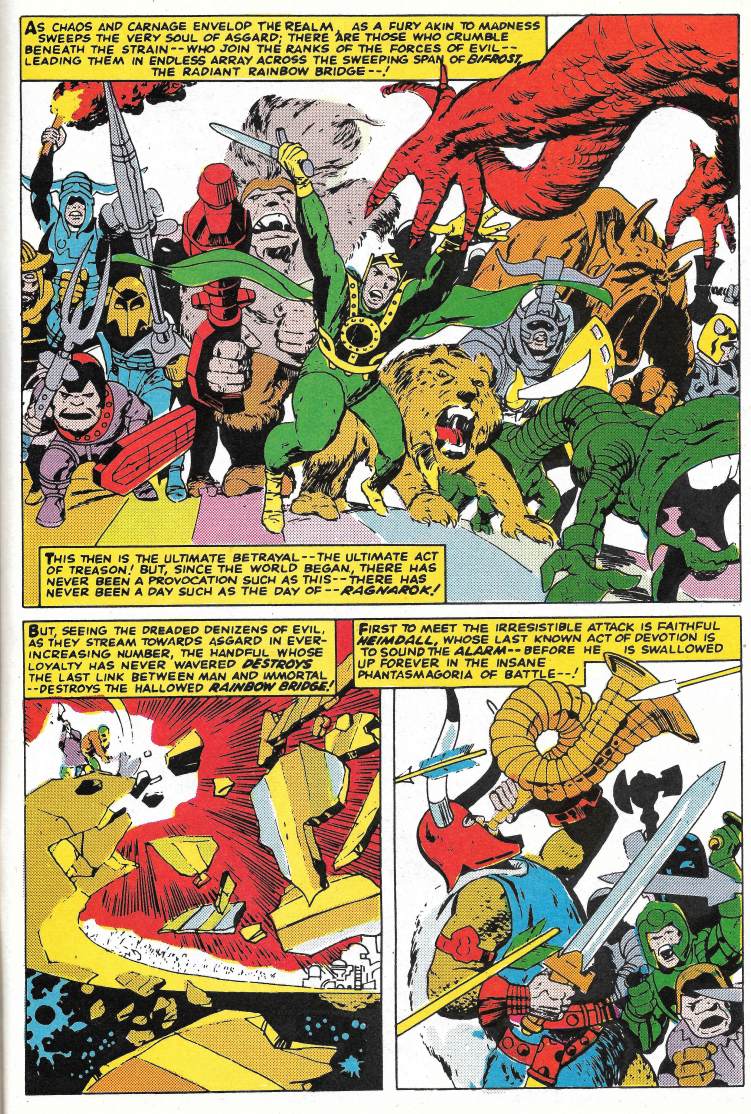 …a god (to be named later) betrays everyone and leads frost giants and monsters across the Bifrost to destroy Asgard (psst! It’s Loki. You can tell it’s him from the picture), causing the gods to destroy the Rainbow Bridge and Heimdall to sound the alarm as his last act of devotion. 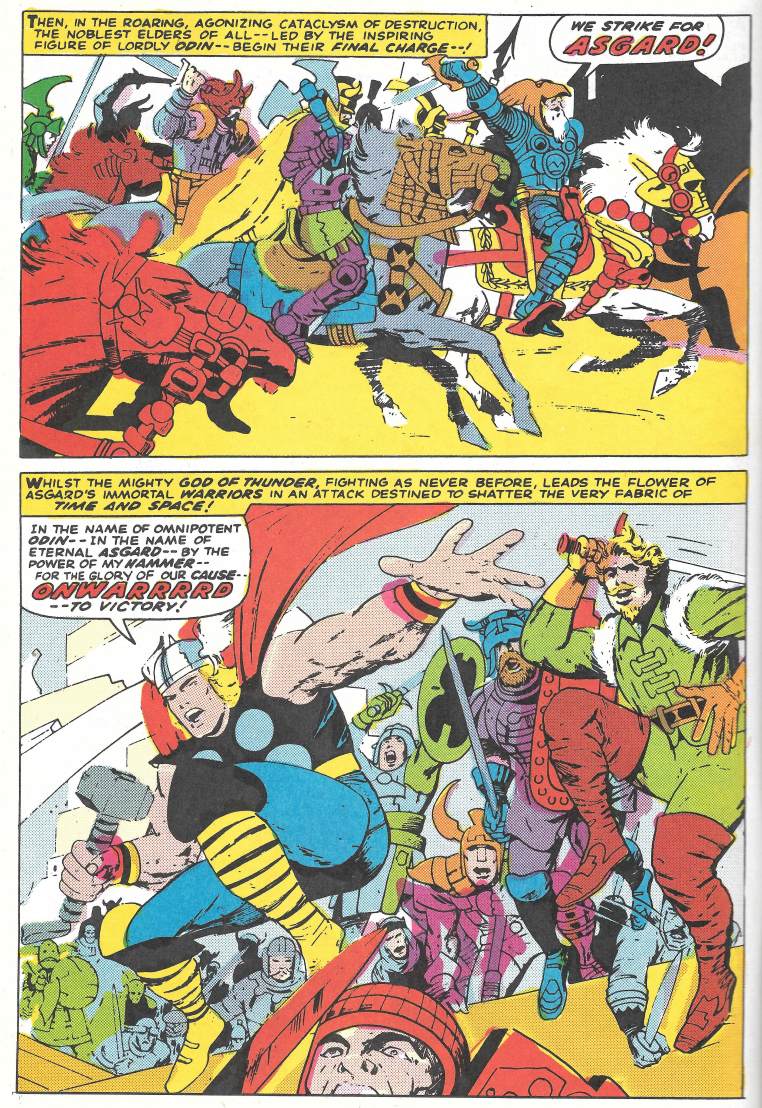 Which prefaces All Father Odin and faithful son Thor moving to defend the golden realm with their very heart and badly inked, poorly color-separated souls. 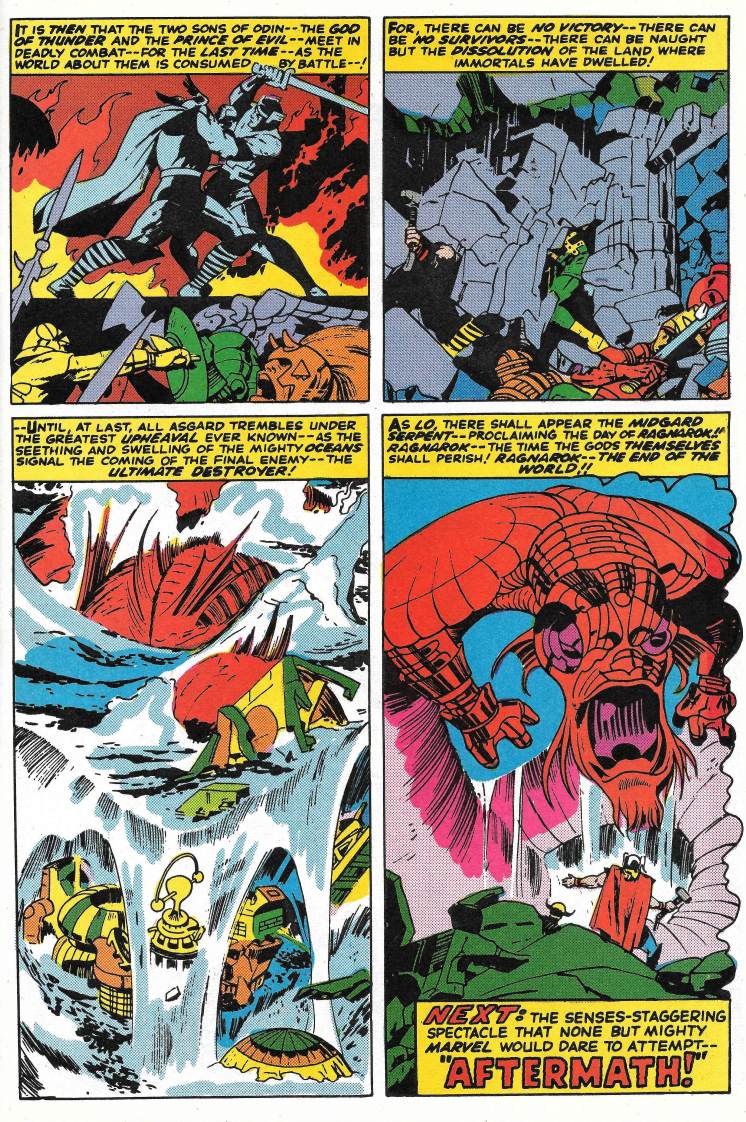 Until only Thor is left alive and must face the betrayer (Loki!) alone in single combat. But defeating him only leads to the ultimate foe rising to avenge him. The appearance of the terrible Midgard Serpent…

And then we even get to see what comes after all this in the next “Tales of Asgard”…but first this brief one-panel recap. 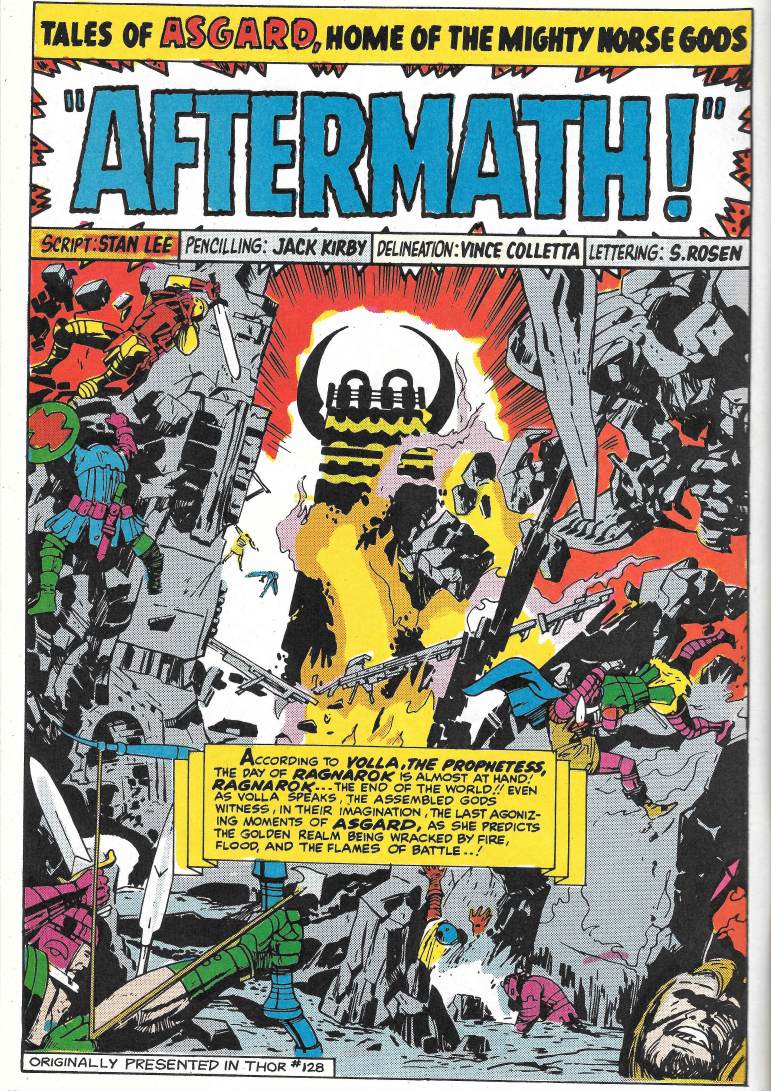 Followed by page one which has Asgard EXPLODE! (seen that in the trailers) shaking the very foundations of Infinity itself. 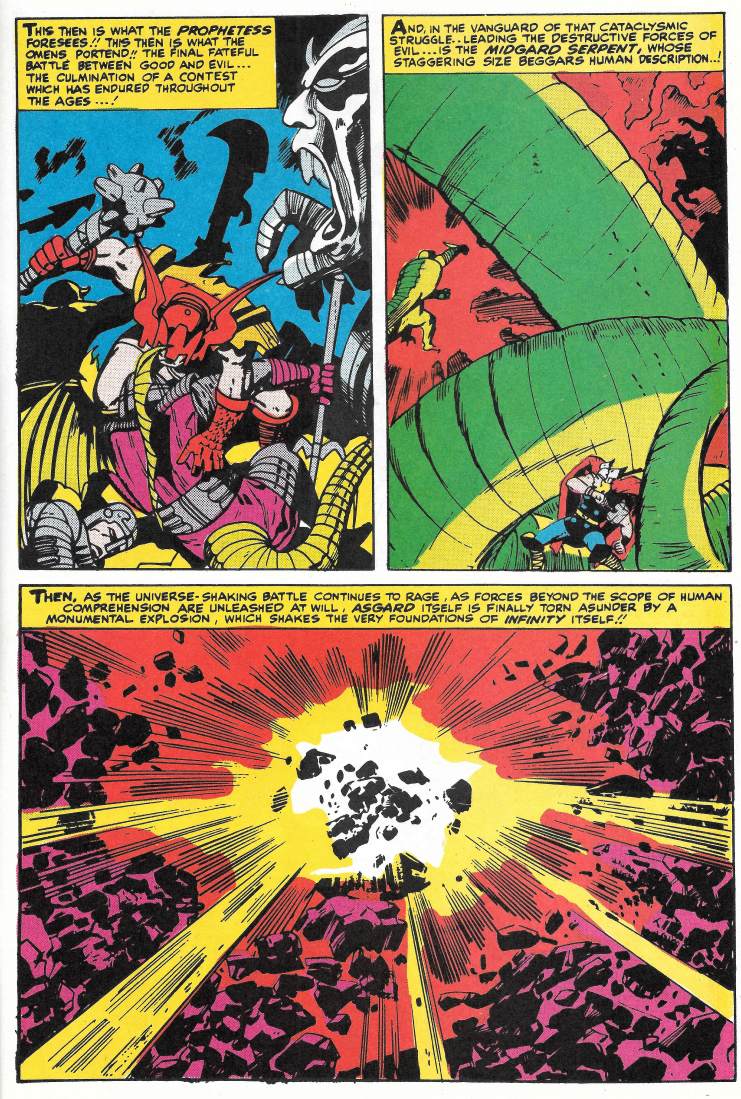 In the wreckage Surtur appears and burns the rest of Asgard as a final “middle finger” since he himself will die next. 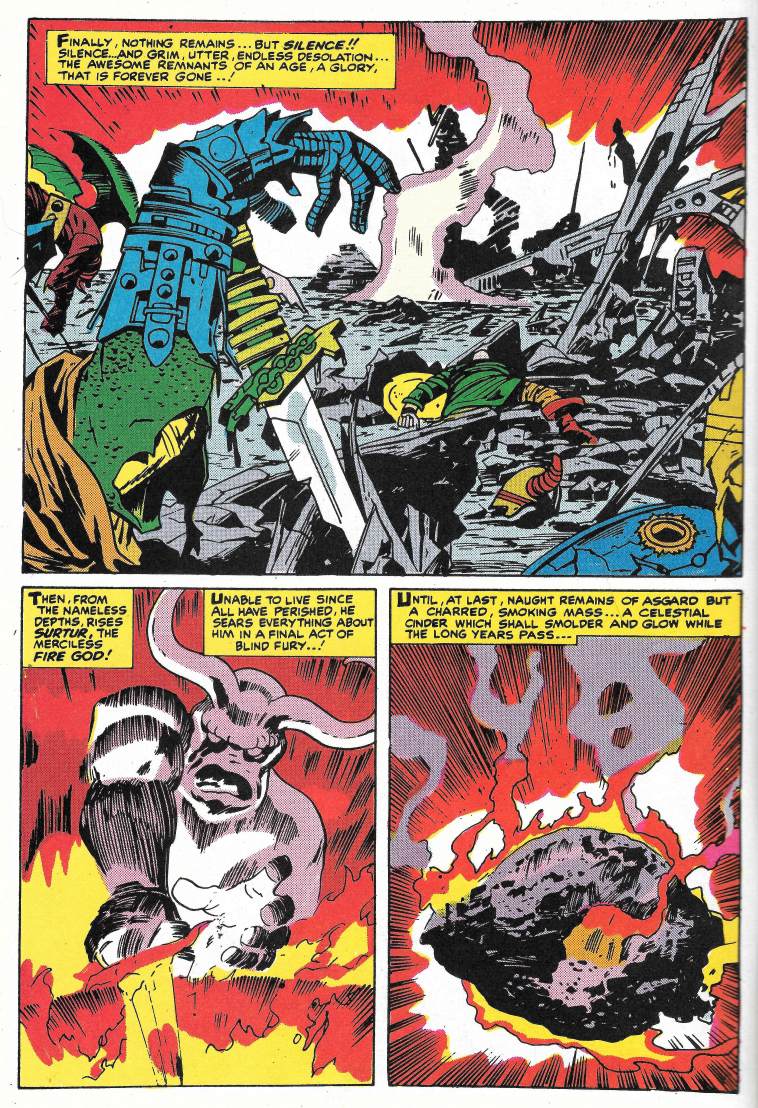 And then some bullshit that everything will start back over again and everyone will be happy, including all the dead people…who I would argue are not happy, but just dead. 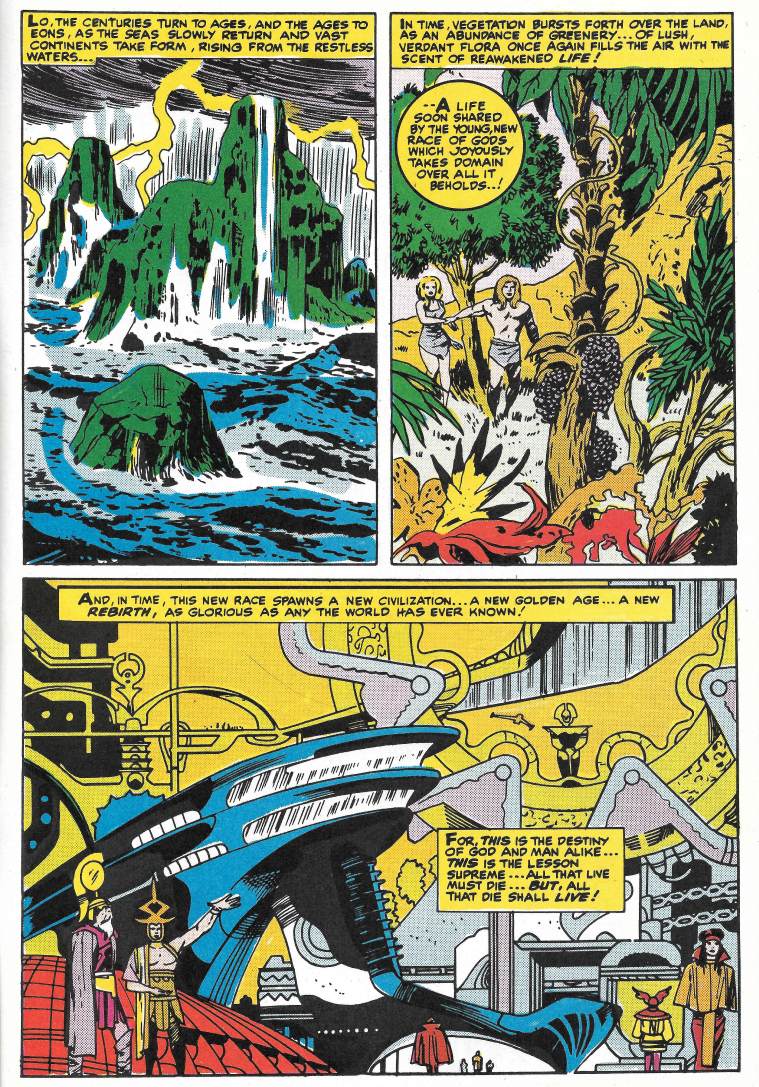 And I think this part was all Jack’s imaginings, since he planned something like this for the New Gods at DC as well. The idea of creating characters and then later throwing them all out and starting over really appealed to Jack. Probably because he had so many NEW characters popping out of that amazing noggin of his that he constantly wanted to clear the way for them.

He really was a tremendously imaginative dude. 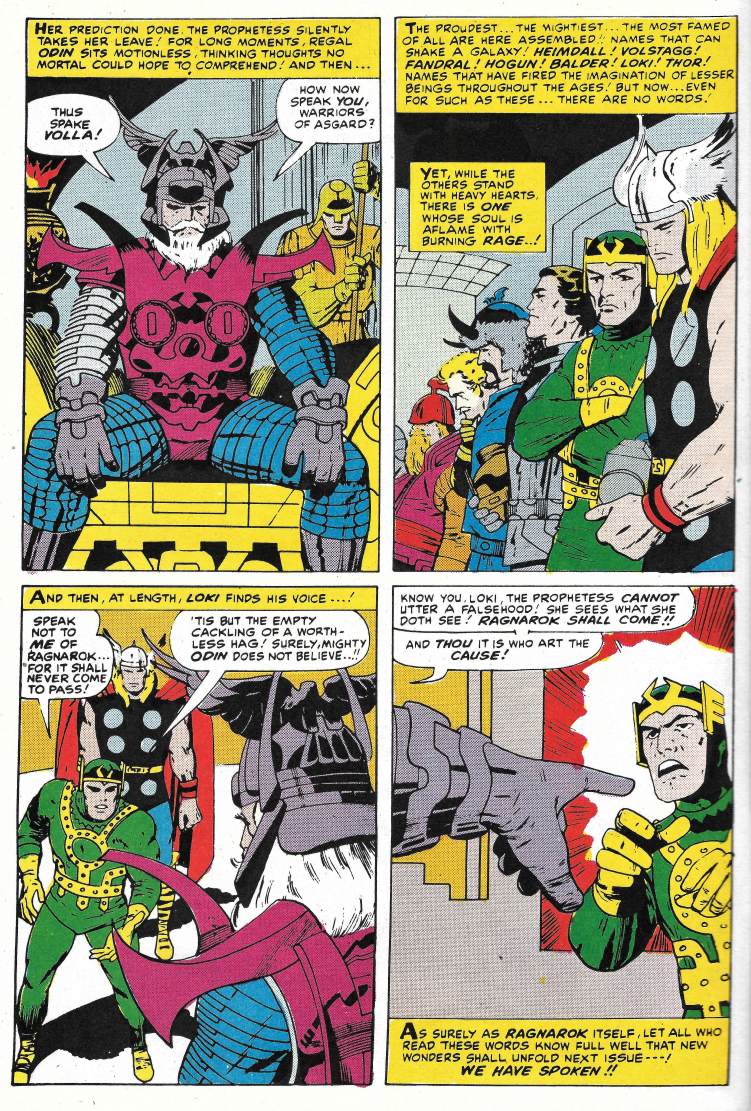 Anyway, with that last bit, Odin concludes and then points out Loki as the one who will bring this all about. Which makes me wonder if that was the case before he pointed or if this is some kind of “self-fulfilling prophecy” deal.

Either way – Asgard in ruins! Explosions and flames! The gods themselves fighting in the streets for the Golden Realm! Thor defeated! Ragnarok!

Yep, should be a great movie.

Posted by SonOfCthulhu at 3:28 AM