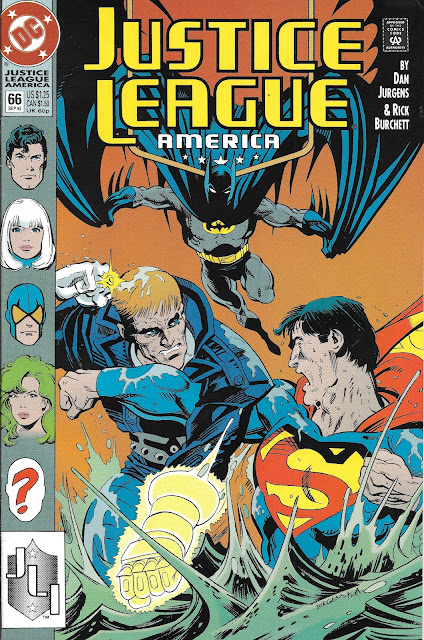 Guy crosses fist with Superman – will he survive?

We begin this one with a brawl already in progress between the “jerk with a ring”, Guy Gardner and the most powerful man in the world, Superman. And don’t think I don’t know that Supes is pulling his punches so he doesn’t hurt Guy. 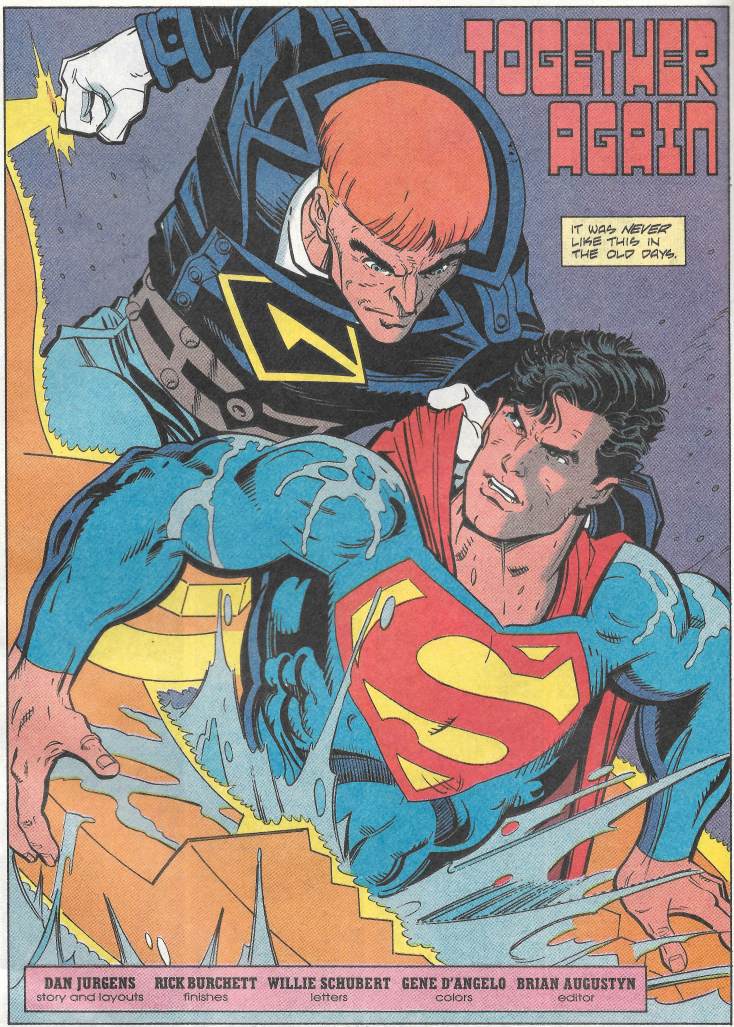 Also Guy is technically not a “Green Lantern” at the moment, having lost his green ring and somehow come across a yellow one. To me that’s a minor quibble. His powers are still the same, he once was a Green Lantern, and…well, that’s enough for my tough grading system.

This fight rages on as Guy does his best at keeping Supes off kilter, possibly knowing that once Guy runs out of stamina, Supes will likely heat vision his ring finger off. Well, he WOULDN’T, but that’s not to state that he COULDN’T. Supes is better than this fight by about nine billion times. 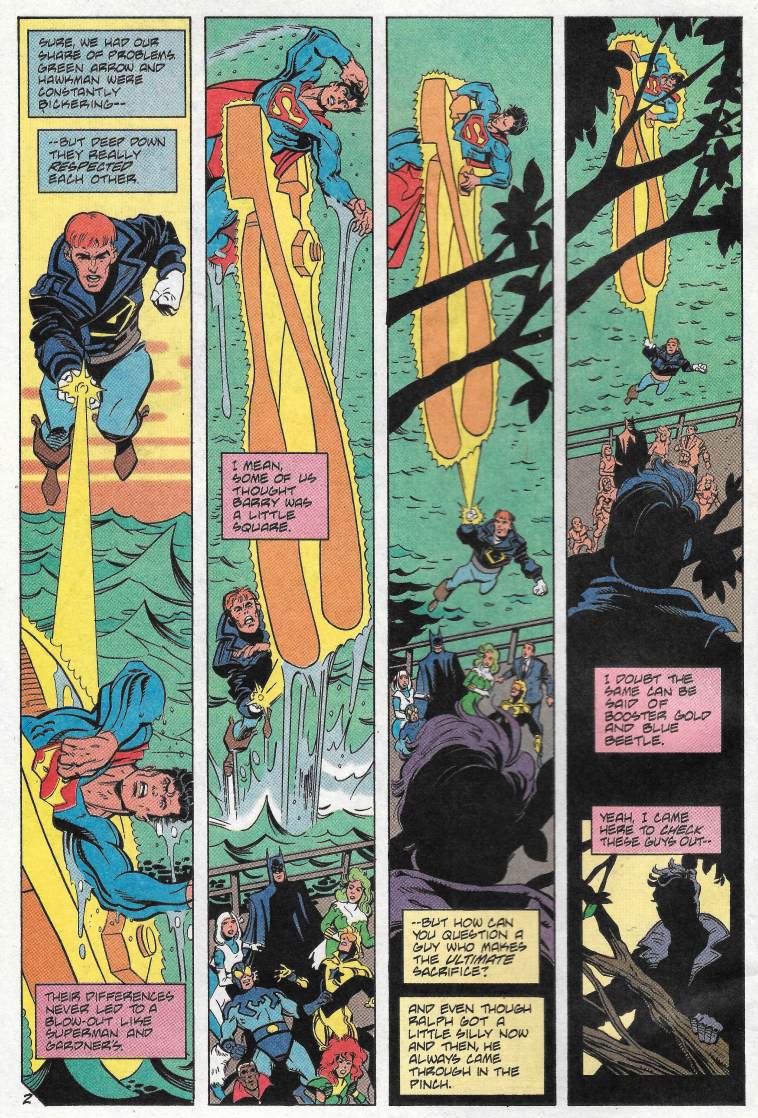 While it rages though, a mysterious figure watches from… it’s the ATOM!... damn it! I’ve spoiled the reveal. Anyway, THE ATOM watches this unbeknownst to the participants or the other JLAs members in attendance. He laments how this league doesn’t measure up to the leagues of the past and how he came to check these guys out, meaning he’s thinking of joining.

We then enter Ray’s thoughts as he has a flashback to that morning, snooping around the JLA headquarters in his pint-sized shape. He hears Oberon and Max discussing Maxima going with Superman to clear up a warrant. Ray recalls that in the “old” days, the league never had image problems.

We then switch from Ray’s remembrances to Maxima’s.  She explains why she is wanted for murder to Superman as they are led in to an office by a detective. 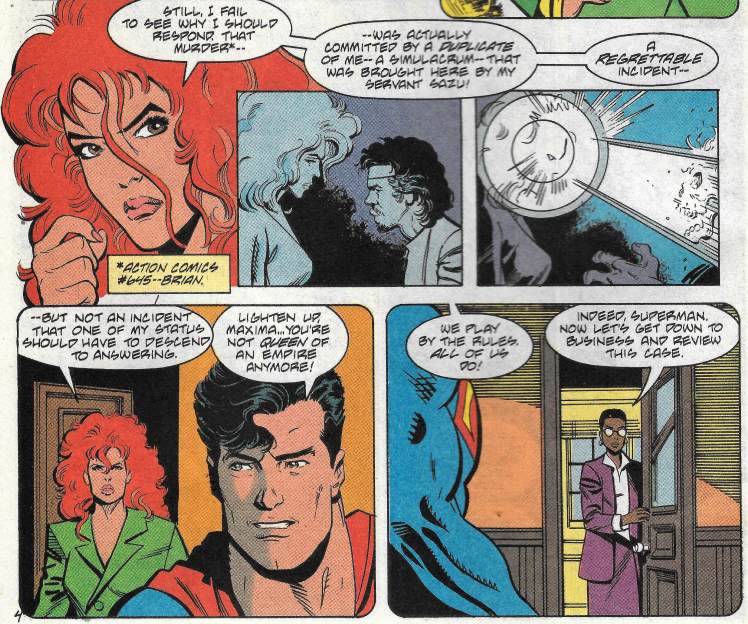 She then produces the very criminal that did it, having teleported her to a distant planet as a sentence for her crimes. This means that she can face Earth justice and also that it will lead to tons of paperwork. The detective excuses Superman from the proceedings. 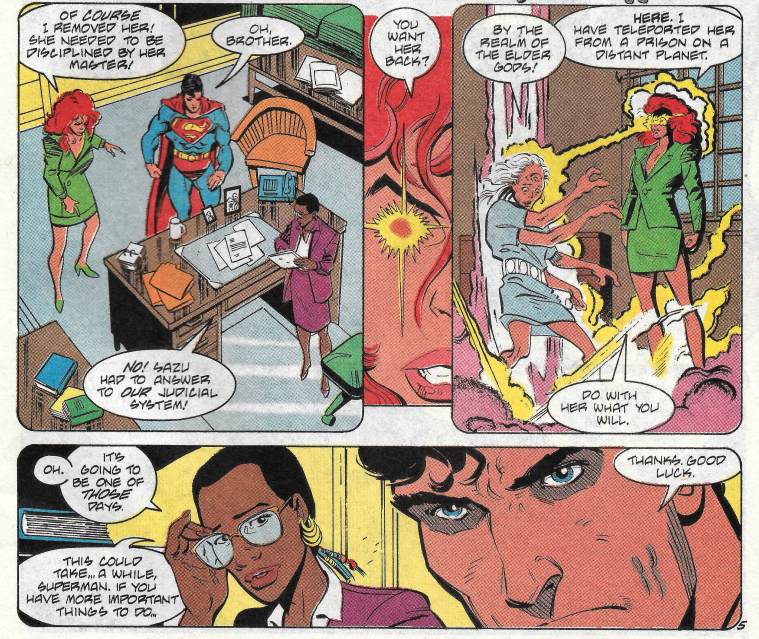 On his way out, he bumps into Batman, who gives him some friendly advice on handling the universe’s most annoying Green (now Yellow) Lantern. 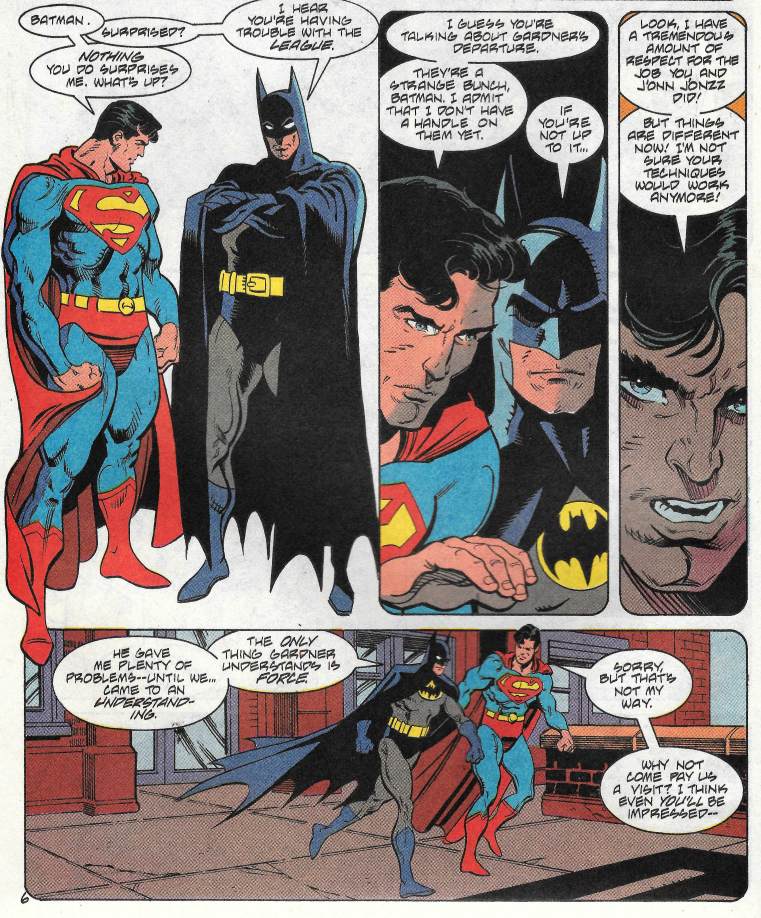 Next we do a little round-robining, checking in first on Beetle and Booster putting a tracking chip in the signaling device so they can figure out BloodWynd’s secret… 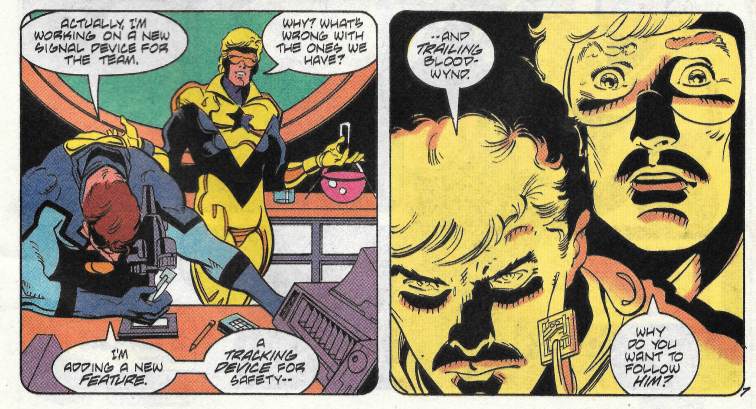 …which Ray watches with an air of dismay, then we are on to Ice and Fire, where this brouhaha has its beginnings. We begin with Bea asking Tora about if her sadness has anything to do with her crushing on Superman. Just about then, Guy shows up… 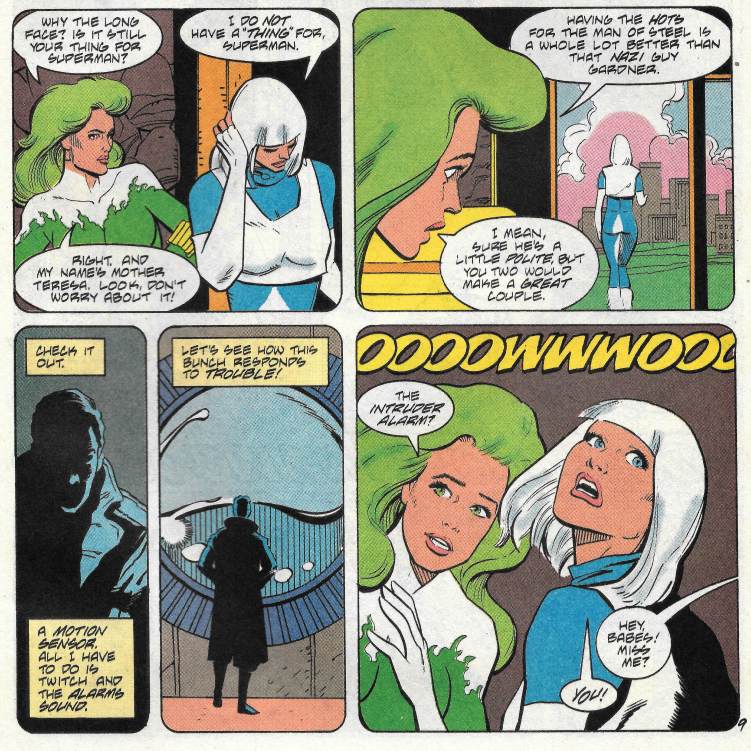 …and since he’s not officially affiliated with the JLA at this moment, he has to cut through the window to get in. Also he’s come to “claim” his woman, which Tora says "no" to and Fire says "no" in a much more physical way. 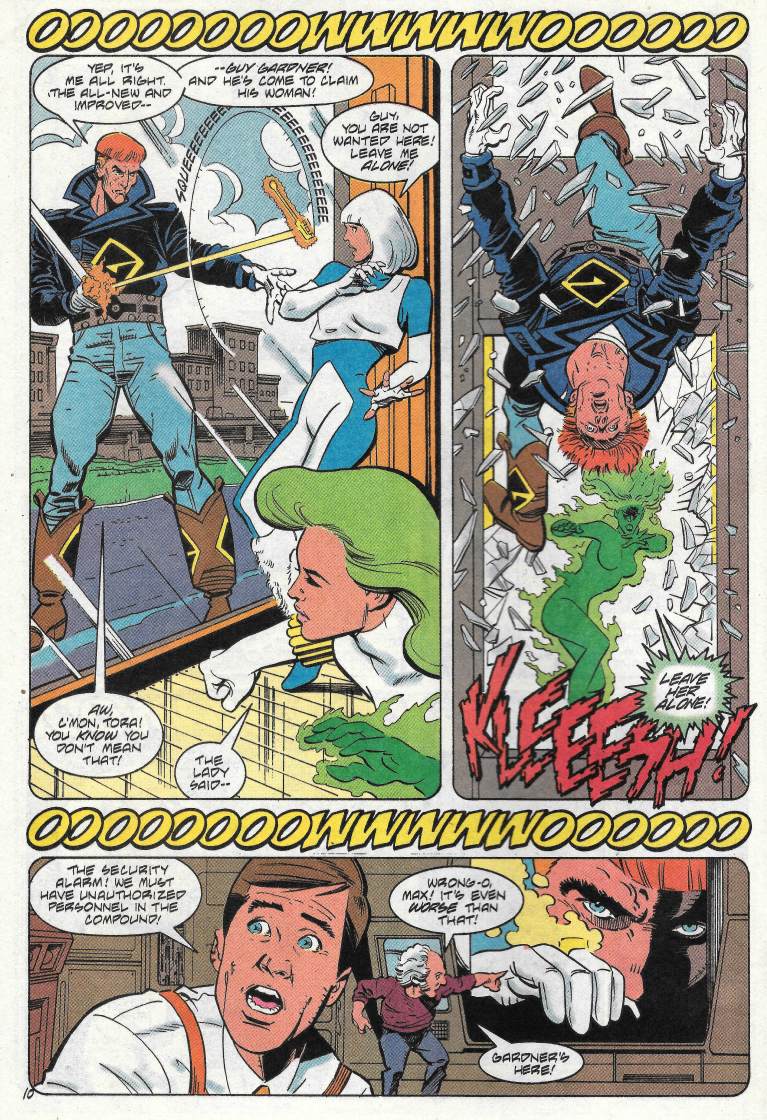 Love how at the bottom of the page Oberon states that Guy showing up is worse than a bad guy breaking in. (I guess they really are the same – both are bad “guys”.)
This leads to Guy taking on the present day Leaguers one at a time, starting with Fire and then Booster… 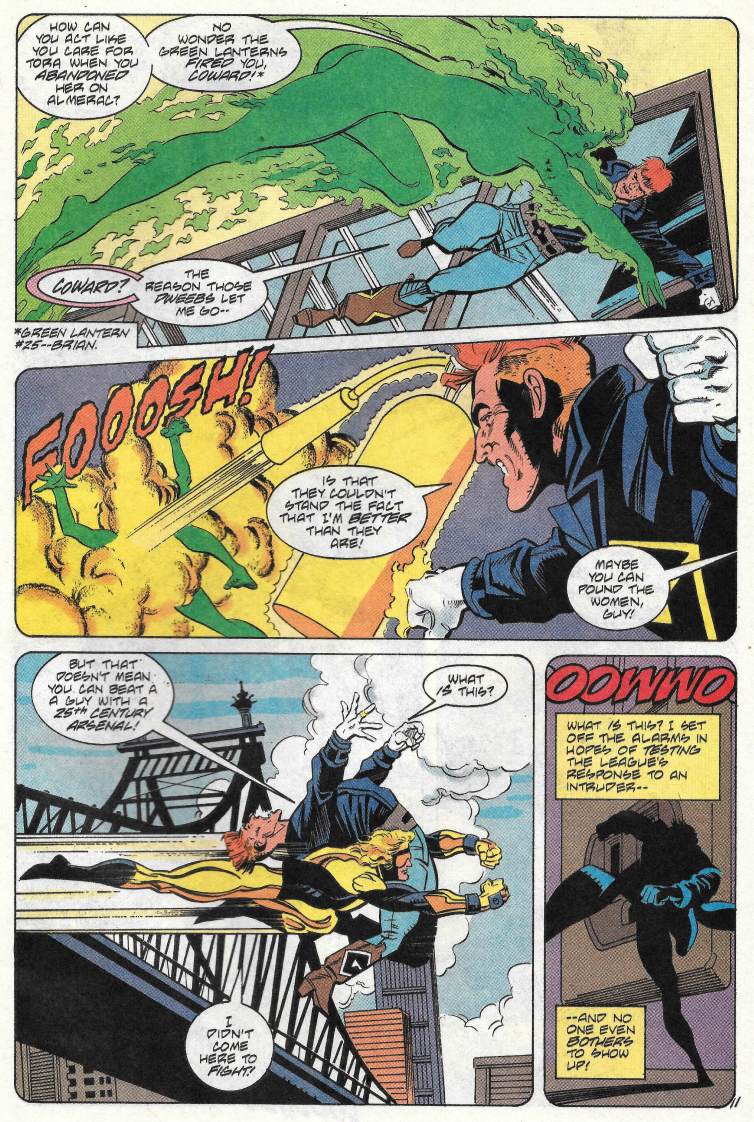 …who does good for a bit until Guy’s ruthlessness gives him the upper hand. 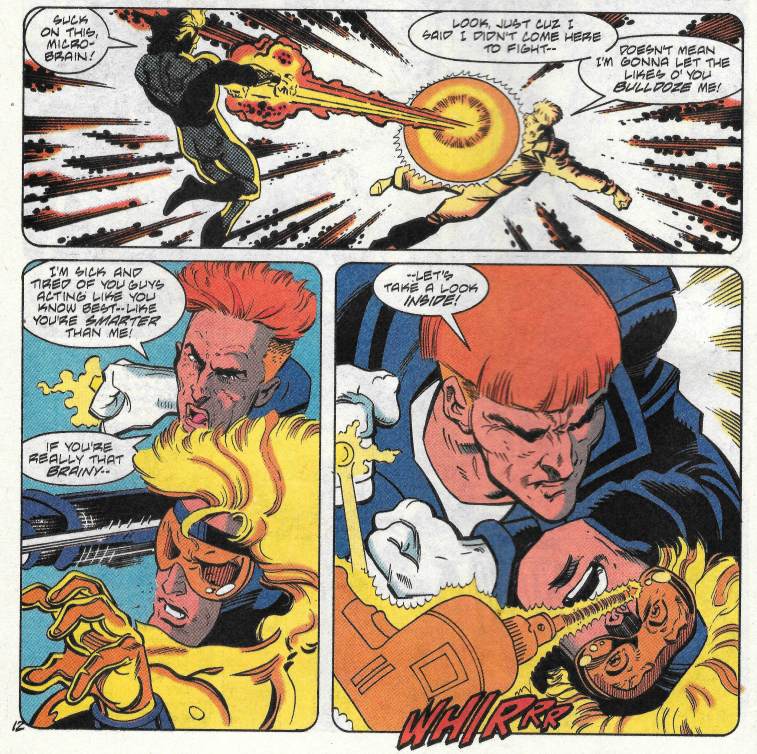 Which leads to Superman stepping in. 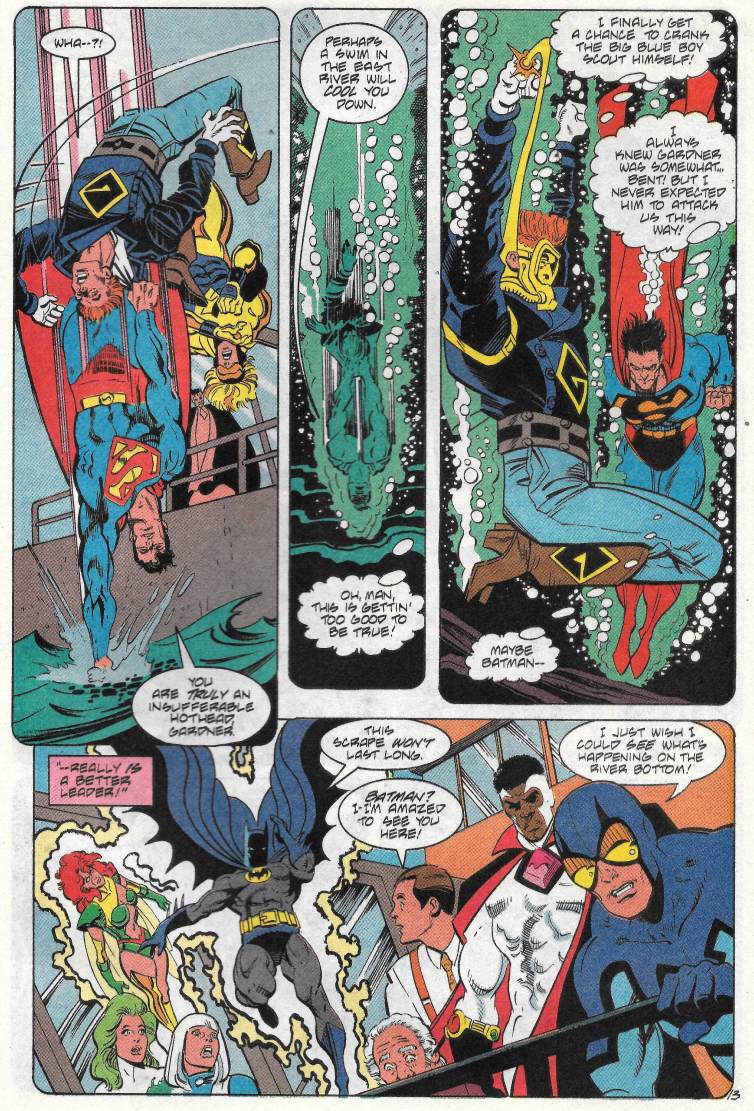 Odd to hear Superman musing if Batman might be the actual better leader here. The truth is that Guy is just a mongrel dog and Batman is a stronger Alpha animal. Superman is an actual human being.

But given that Batman is the one who has Beetle check the actual alarm to be certain the only intruder was Guy… maybe Supes is on to something. He might mean that you really need the DC trinity to have a proper functioning league. 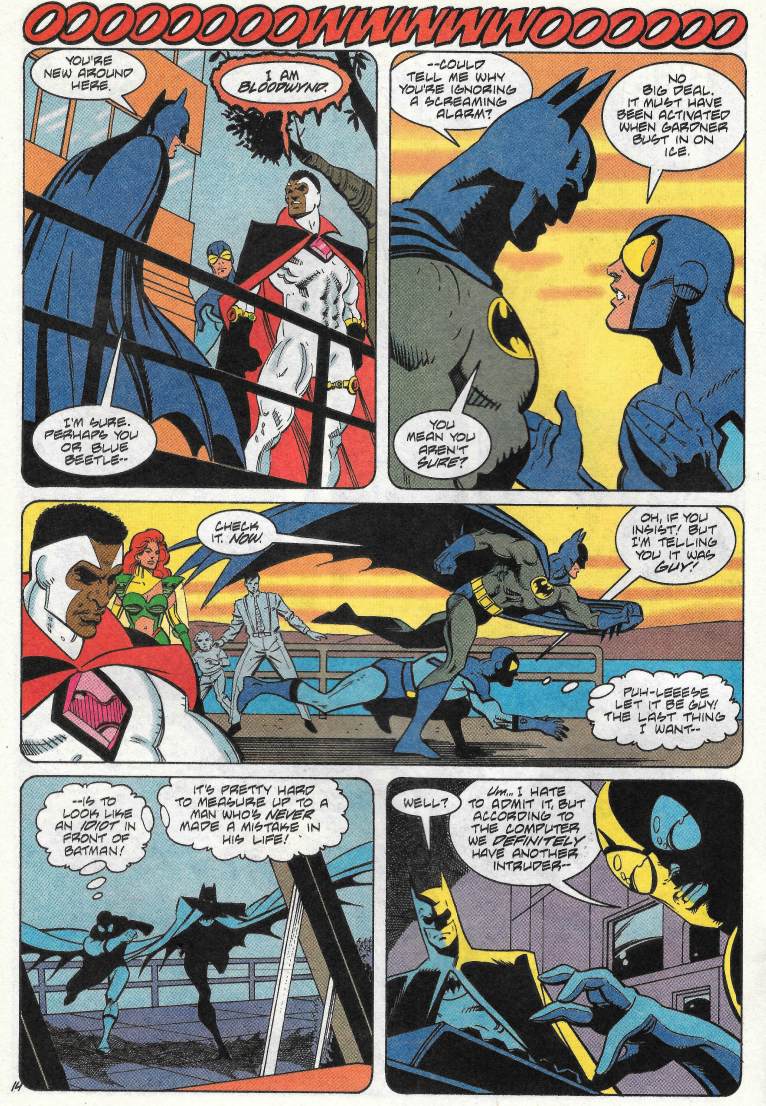 The Giffen years were great, don’t get me wrong, but a large majority of that fun came from interactions that we were rarely privy to before Giffen's league. It’s fine to watch the old school JLA burst into action. But beyond very brief moments we hardly got to know the people behind those masks at all. You can’t say that about Giffen’s tenure. We know all the people who are the superheroes and who they are in real life ways. Their strengths, weaknesses, struggles, triumphs. Every bit of it is on display.

Did they fight anyone of note? Sorta, but most of their adventures were jokes compared to the old-school silver-age league or the Morrison-Porter era that came after them. And I think that’s primarily because you need three functioning heads to make the League work. You need Batman’s brains and cunning, you need Wonder Woman’s heart and wisdom, and you need Superman’s decency and strength.

Even then, the book can fall victim to poor writing, but without them you don’t have a chance at a well-oiled machine. You have what this is. A mess.

A mess like Beetle is now in, since the sensors determined that there was another intruder. We already know who that is, though.
At this point we return to our underwater battle, where Superman is proving to the thick-headed Guy that he can take any punch Guy can throw without it doing diddly to him. Guy is too thick and stubborn to let it drop though… 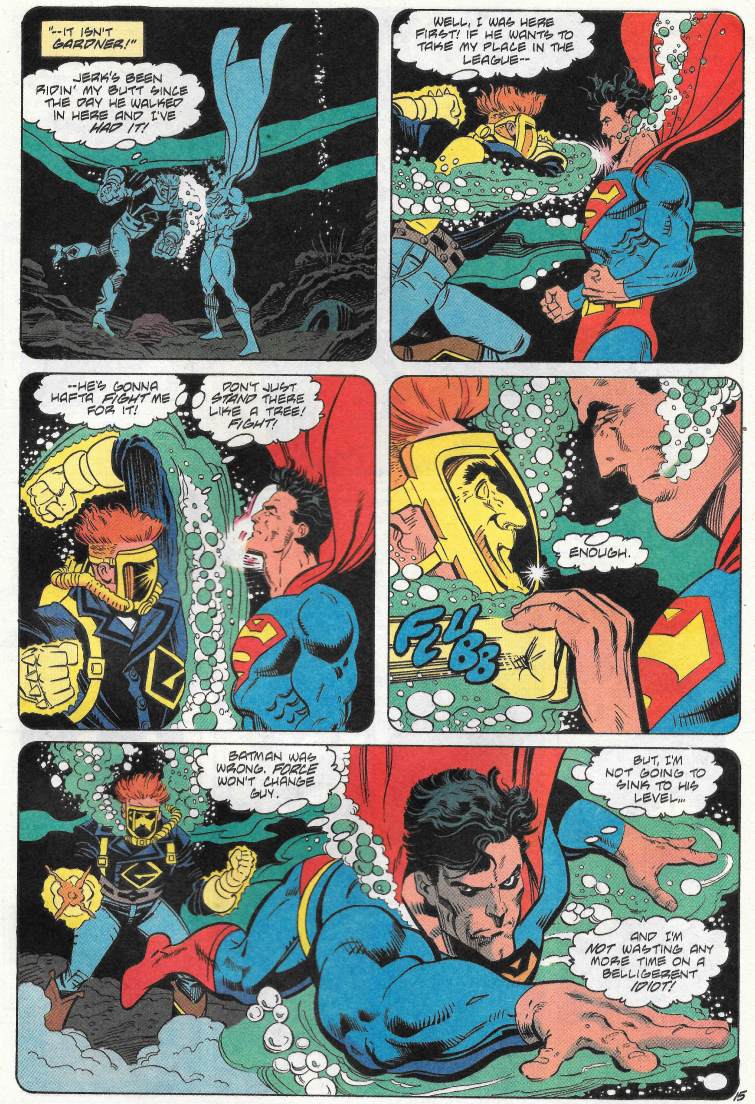 …Note that Supes isn’t “going to sink to his level,” which might mean that Guy won’t get the slugging he rightfully deserves.

Batman and Beetle return, warning the others that they have an intruder. Bats kind of blames Ted for all this, just as Ted states the intruder is only six inches tall. That’s when Bloodwynd does this, marking Bats as the next patsy in the Atom’s little charade. 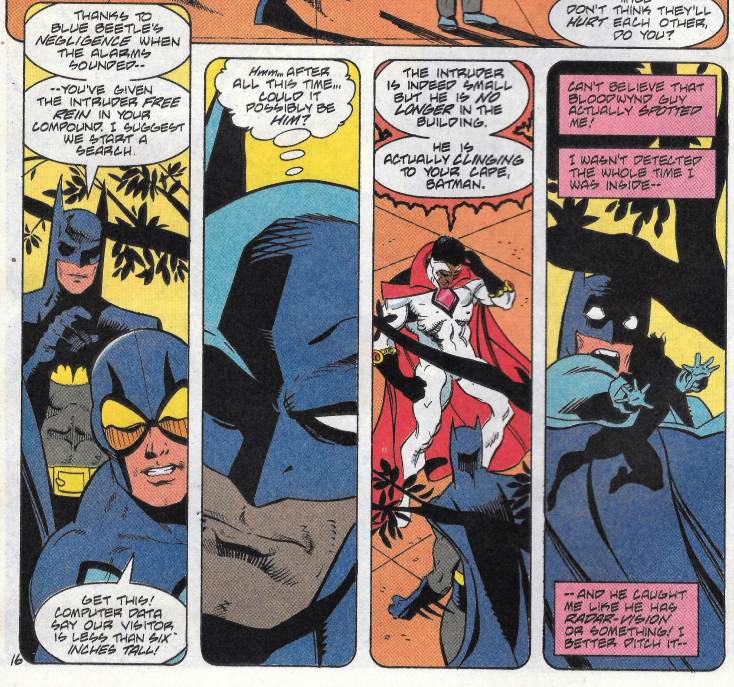 As the Atom hides in the foliage, Guy is still going at Supes. The man of steel isn’t taking the bait though, refusing to fight back. 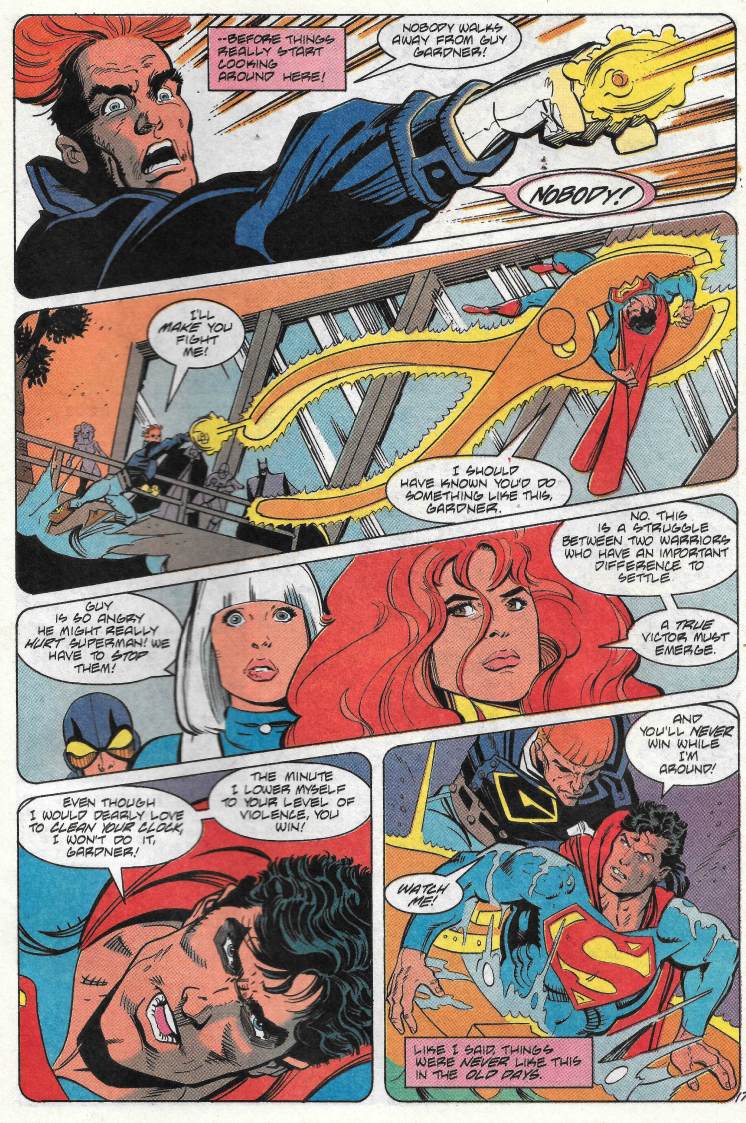 Guy gets all triggered by Superman’s words, just about losing it over his very colored version of the past few minutes. Looks like this is going to go on for a while… 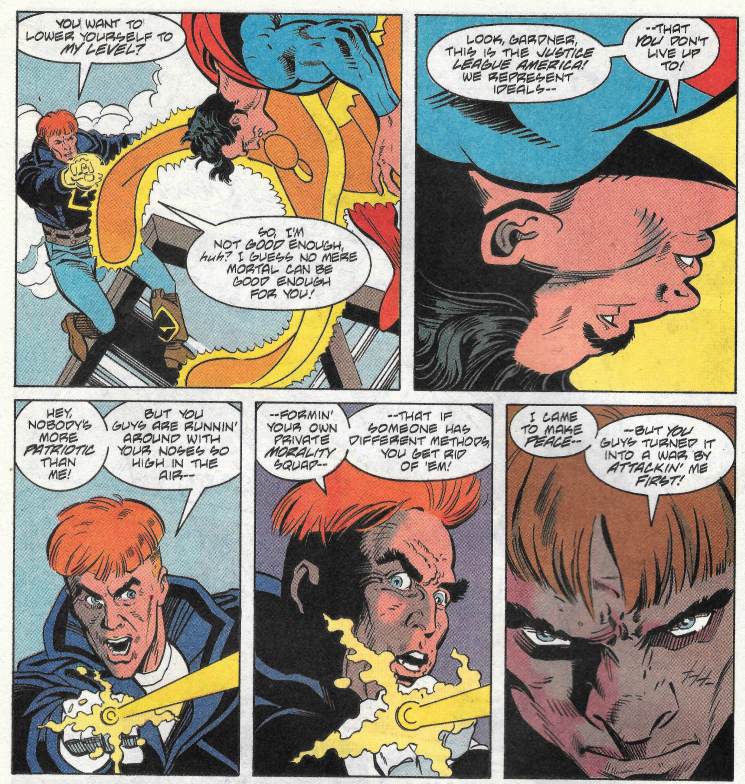 …which Ray decides to do. He uses his density power and… 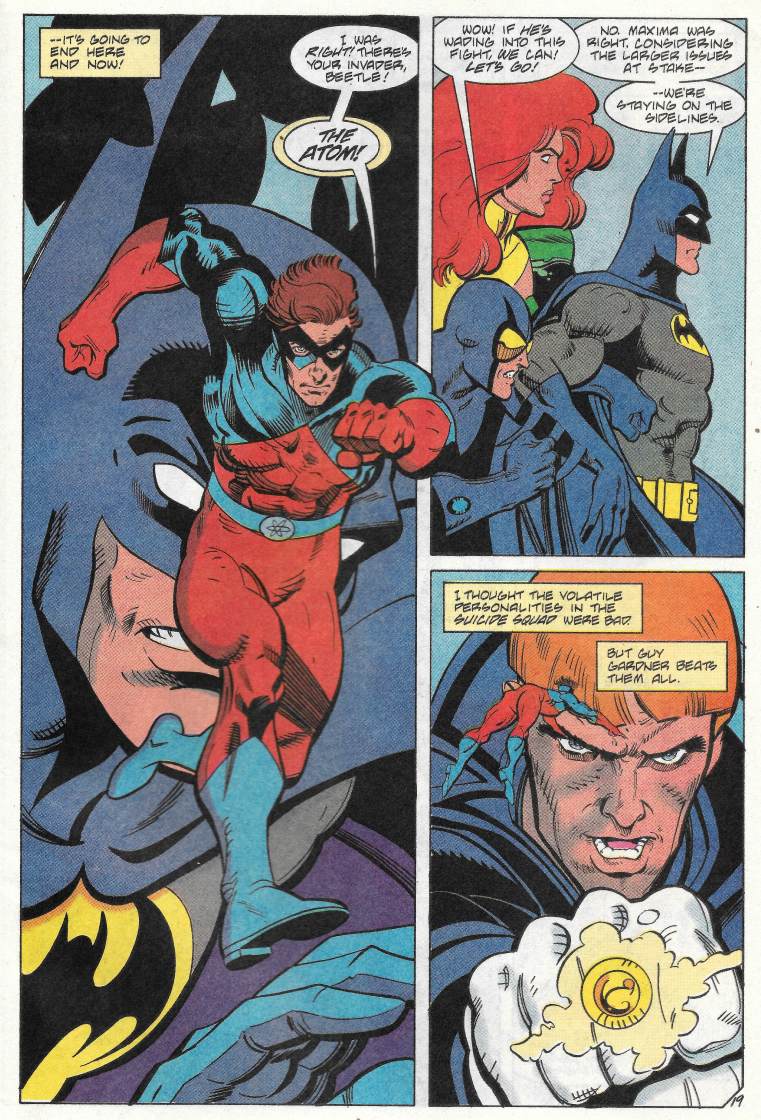 …delivers a tap to Guy’s ring finger in a manner that even the power ring can’t fully absorb. 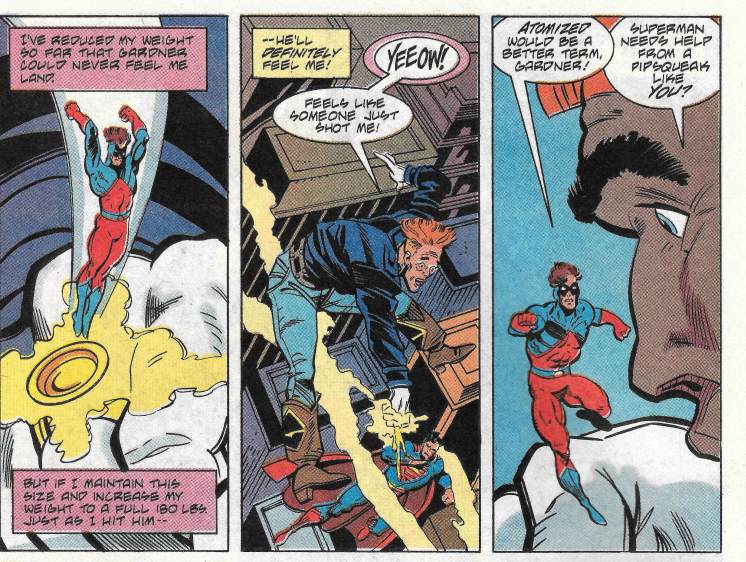 Ray then gives the stunned Gardner an ear chewing he won’t soon forget. This is a great moment, possibly the best that Ray has this go around with the League. 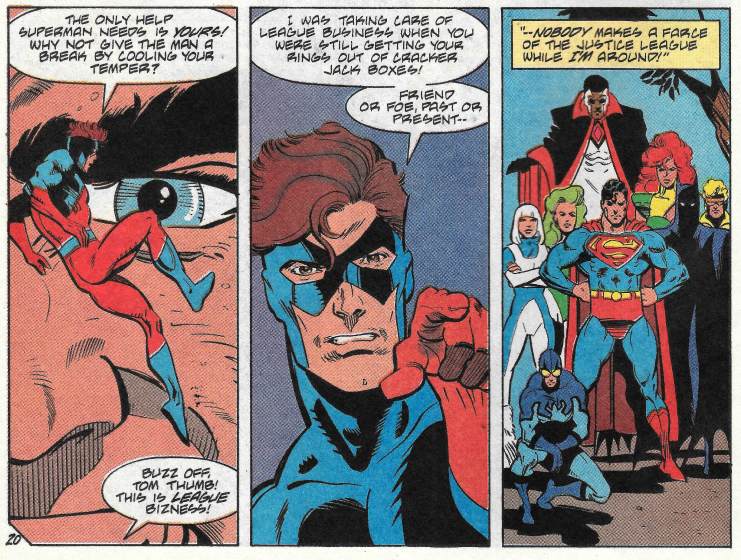 We end with this little chat between Batman and Superman… 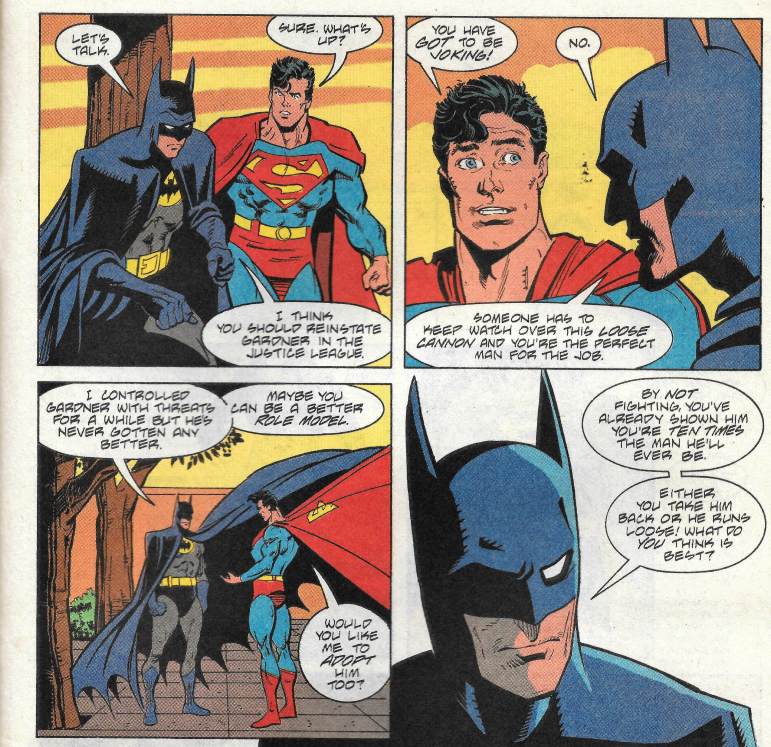 …and this moment between Guy and Ray, both of which point to good stuff coming down the line. 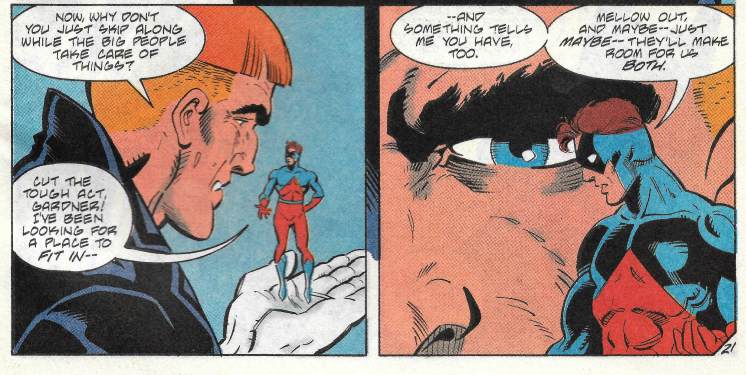 Most of what I’ve seen in the Crapbox after this issue didn’t live up to that promise before this version was disbanded. With good reason Ray is skeptical about his future with the league. 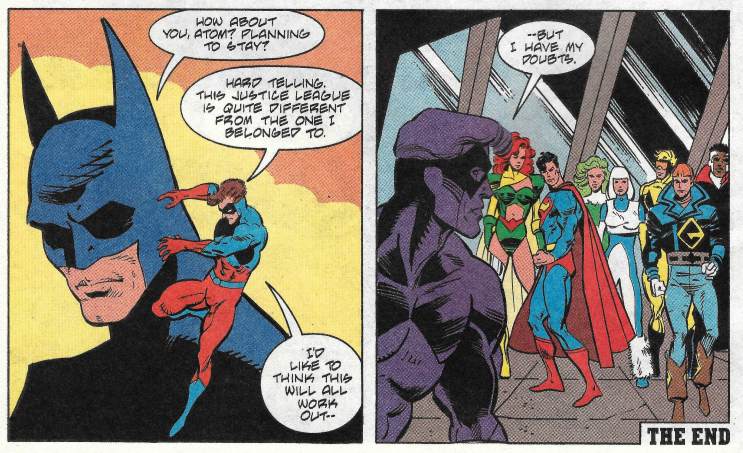 And the winner is: Justice League of America 66

Even though the punch is more like a kick and our Green Lantern is decidedly yellow, this still wins out as more emotion packed than JLoA #127.

The implications story-wise were greater as well. Through this bit, Guy has a bit of respect for Ray he didn’t have at the beginning and Ray feels a bit more in control of his destiny.

The sole outcome of the other issue centers around everyone feeling that Hal needed their support once he awoke. After that issue, it is business as usual and there doesn’t appear to be any long-lasting emotional impacts of Superman’s punch.

So enjoy your “second best” trophy, JLA 66. Oh and Justice League? While you are at it, maybe stop punching Green Lanterns so much? They are working on your side, you know.
Posted by SonOfCthulhu at 2:38 AM