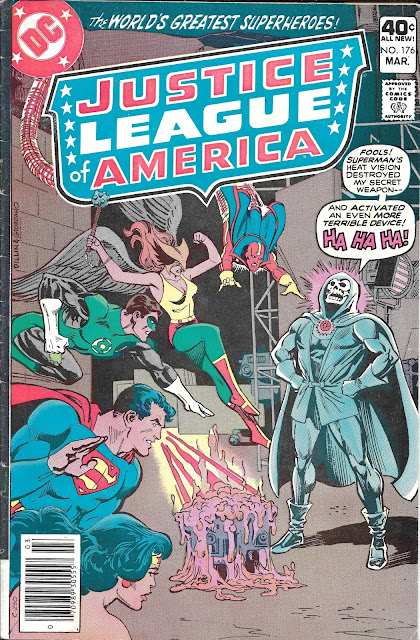 I glossed over the greatest hero on the Justice League of America title of the 1970’s. This hero isn’t a character in the book, but the penciler, Dick Dillin. I’m no DC scholar, having spent most of my childhood as a Marvel fanboy, but I can recognize when someone goes beyond the norm in their chosen profession. Dick Dillin was one of those exemplary individuals.

Dillin began his art career at Fawcett Comics and Fiction House in 1948. He moved on to working at Quality Comics in 1952 on their popular Blackhawk title. When Quality Comics went under he tried his luck getting work at DC Comics, who, unbeknownst to him, were looking for him to continue his work on the Blackhawk series.

After Blackhawk wrapped up, he moved on to drawing World Finest Comics before being assigned Justice League of America, where he would pencil the series from issue 64 until his death in 1980. His last issue was number 183 and aside from four reprints and two fill in issues (153 and 157), he was the only penciler to work on the title.

I’m still stunned by the length of this run. In many ways, his name should be synonymous with the Justice League title, however up until I started my research I had not heard of him. So much of the Giffen-DeMatteis-Maguire run and then Morrison’s excellent return of the classic team eclipsed what came prior to them.

For me, Dillin became lost in the shuffle.

Gladly let’s dive into a one of his adventures, beginning with this little beauty, part two of a two part tale involving a favorite villain of mine, Doctor Destiny… 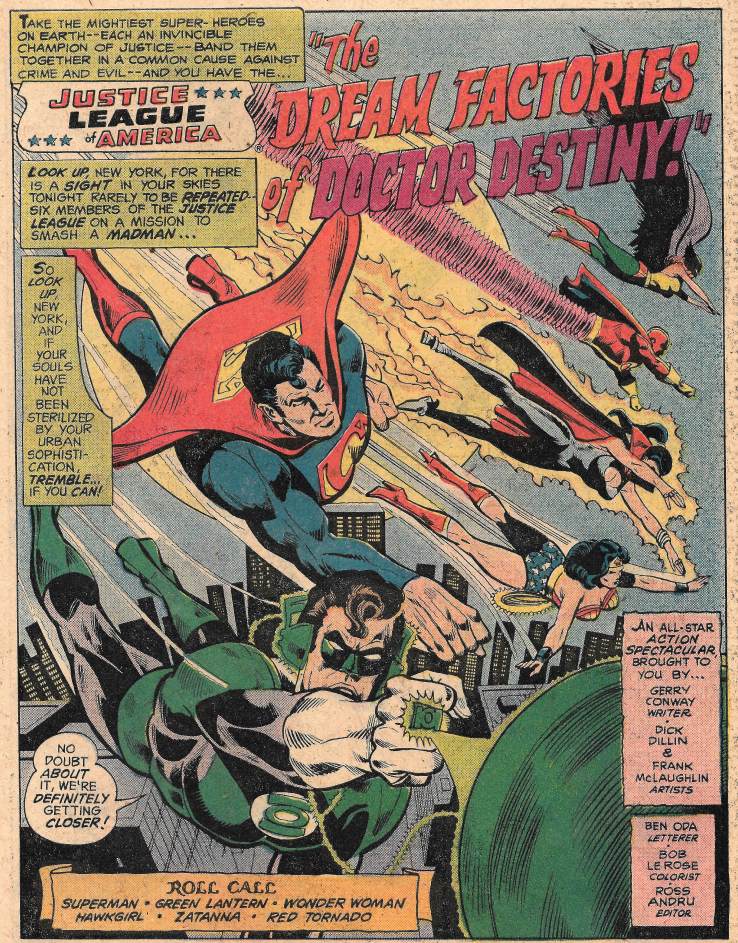 We begin with a Batman-less league roster desperately searching for Doctor Dee after the dream master has attacked them in their headquarters.

As they approach his warehouse hideout, however, the roof transforms into giant muscle-bound monstrosities who laugh at their pitiful superpowers. 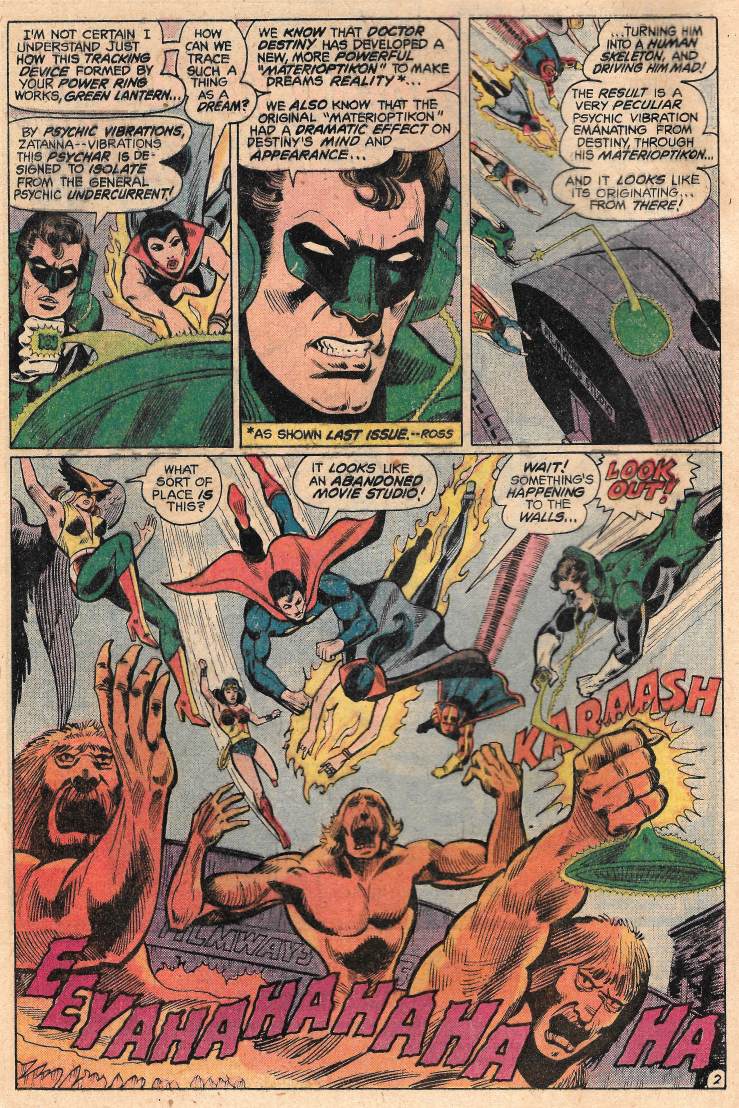 The monsters go on to transform into the heroes greatest fears BUT as Red Tornado points out, they are easily dispelled if one faces them head on. In fact, they seem rather easy to defeat. 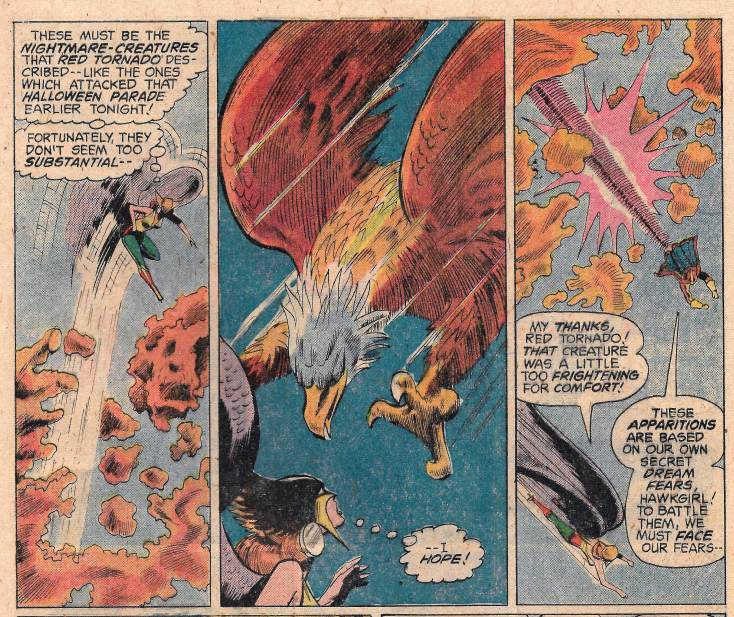 Armed with that knowledge, the Leaguers gain entry into the film studio warehouse and using Zatanna’s hard to read, backwards-speaking magic they dispel Doctor Destiny’s illusion of invisiblity.

The villain is adamant that they haven’t won though, which means multiple quests, you just watch. 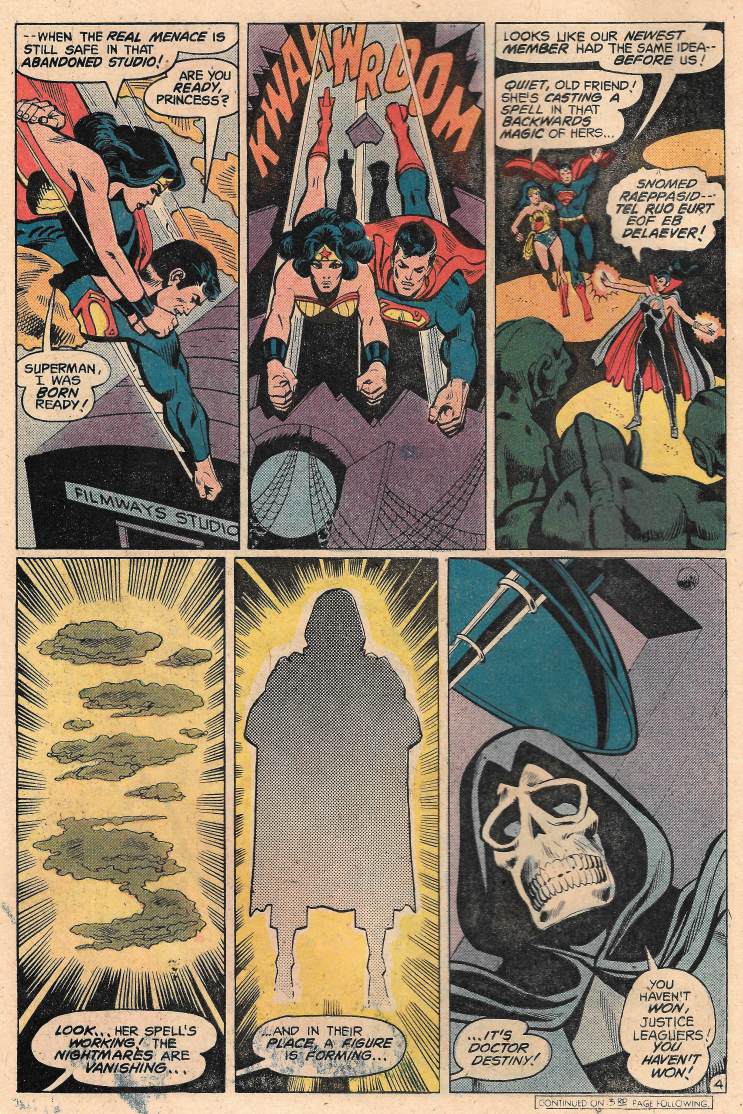 Superman melts Destiny’s “Dream Machine,” or Materioptikon, as the good Doctor likes to call it, setting off a chain reaction in THREE other cities across the globe!! 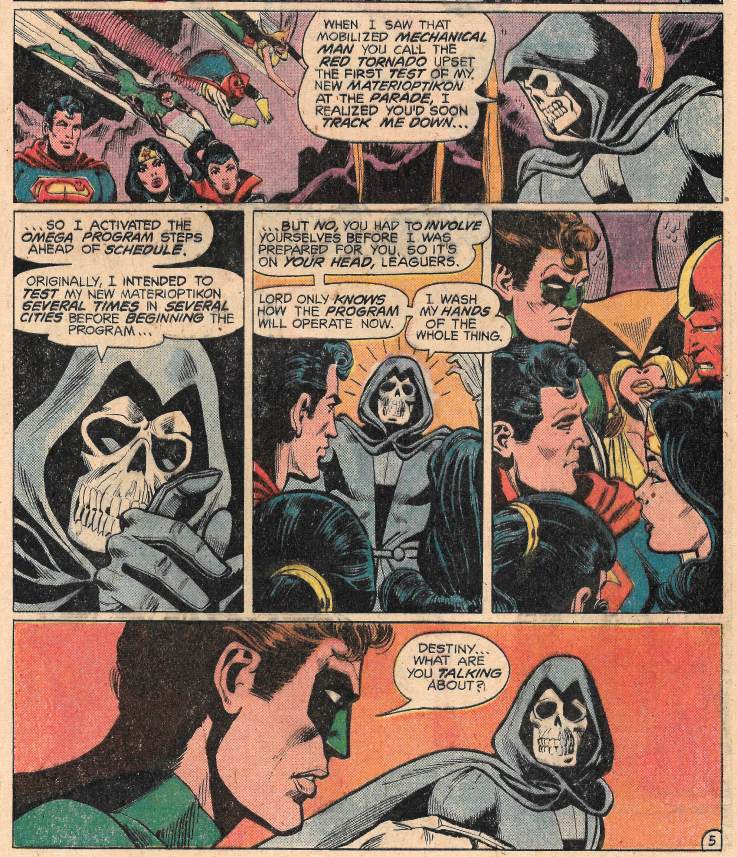 I like how everyone looks at each other before Hal speaks. Just like “Da foock he talk’n ‘bout?” 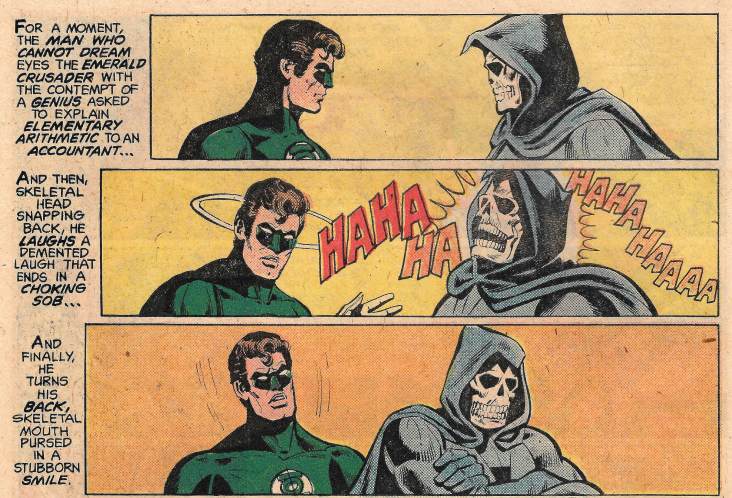 Well, Doc D don’t play that noise of giving up his master plan. (Note: There is NO WAY the good doctor can smile without lips. No WAY, guys!)

So, Wonder Woman does the ole Rope Trick that she’s so well known for and….wall-lah! 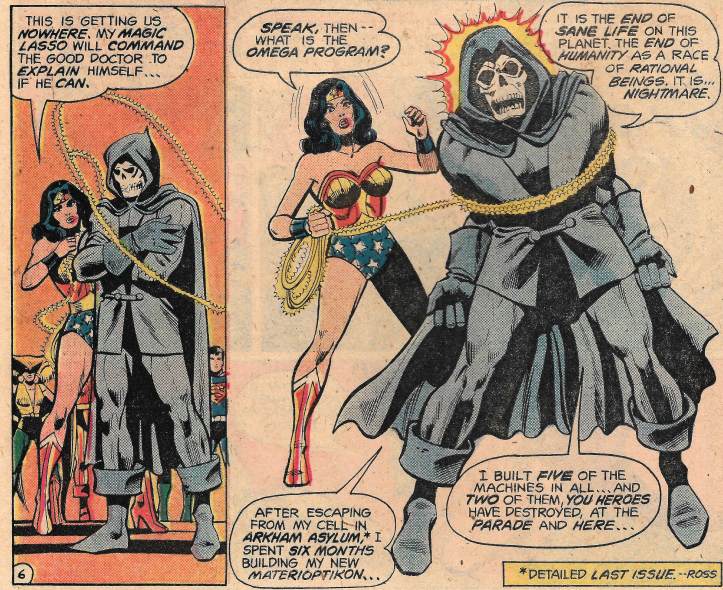 Mostly, anyway. Green Lantern has to give a helping imaginary mind reading box and then Doc Dee spins out his plan to destroy the world starting in three separate places. 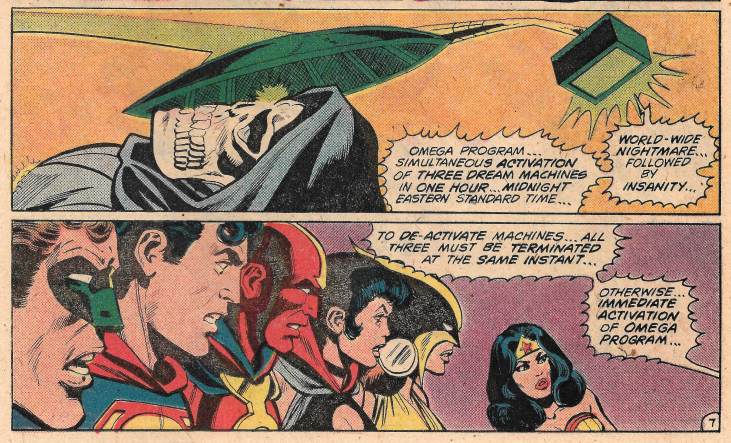 But the good Doc tells it setup like riddles so our heroes must do a little brain work proving they are more than just muscle. And for an added factor of danger, each machine is tied to the other two. Destroy one and the other two will start messing up reality immediately. 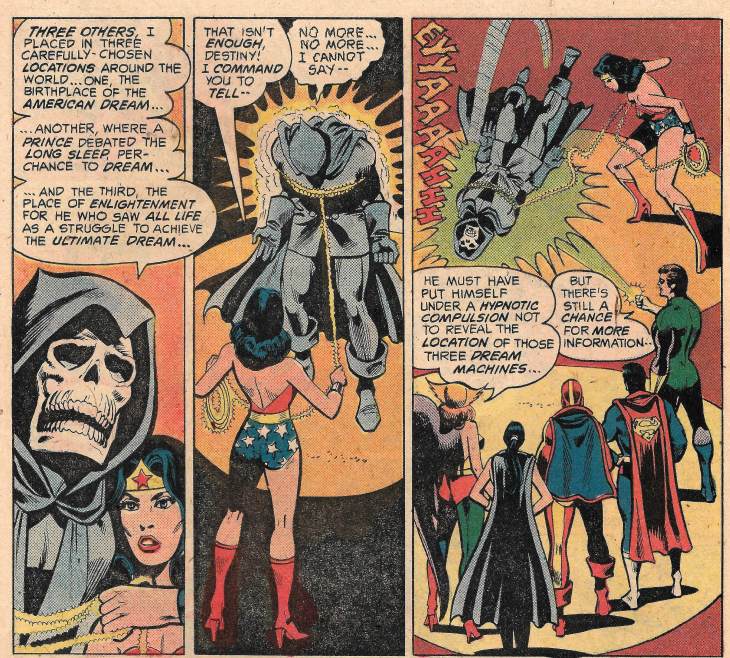 Which makes this one of the “split up into teams” stories, which are not really my faves. Here they head out as they leave the villain asleep in a GL made cage…which means what exactly? That he can break out when GL gets distracted? This seems like a poor choice in my opinion. 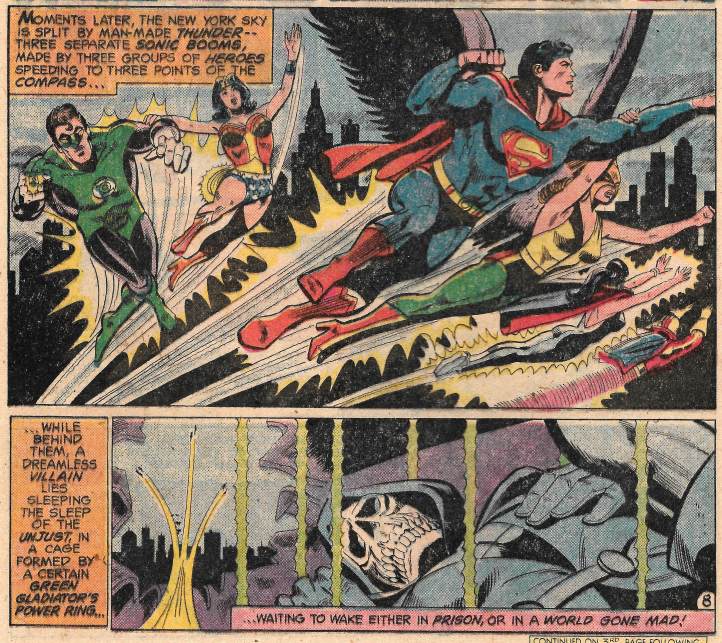 Anyway, we find out that while all this is ongoing, Batman has single-handedly saved America from facing a financial crisis by defeating Professor Plutonium with the help of his Batarang and some deftly tossed Twinkies. I wonder which pouch in his utility belt holds those sponge cakes? 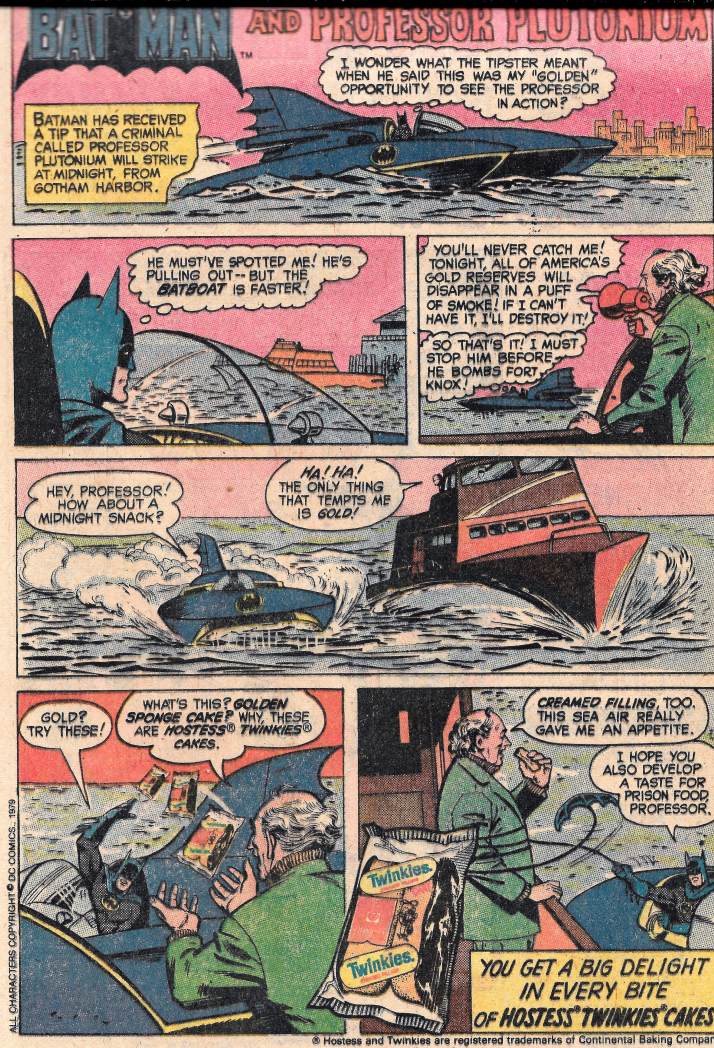 Meantime, Supes and Hawkwoman rush to Denmark to find Hamlet’s hamlet. There they are met by dream demons, who should be a breeze to get past. 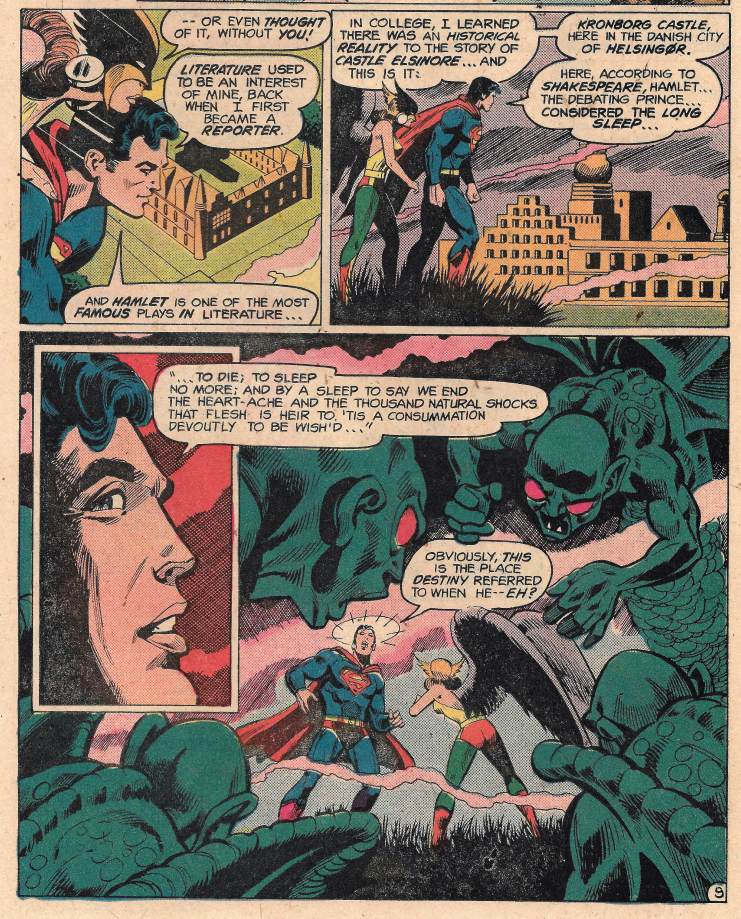 While superman uses heat vision on them, Hawkwoman makes it to the machine only to menaced anew, setting up out template for how all three of these quests will end: one of the team members running interference while the other finishes the job of destroying the machine. Next… 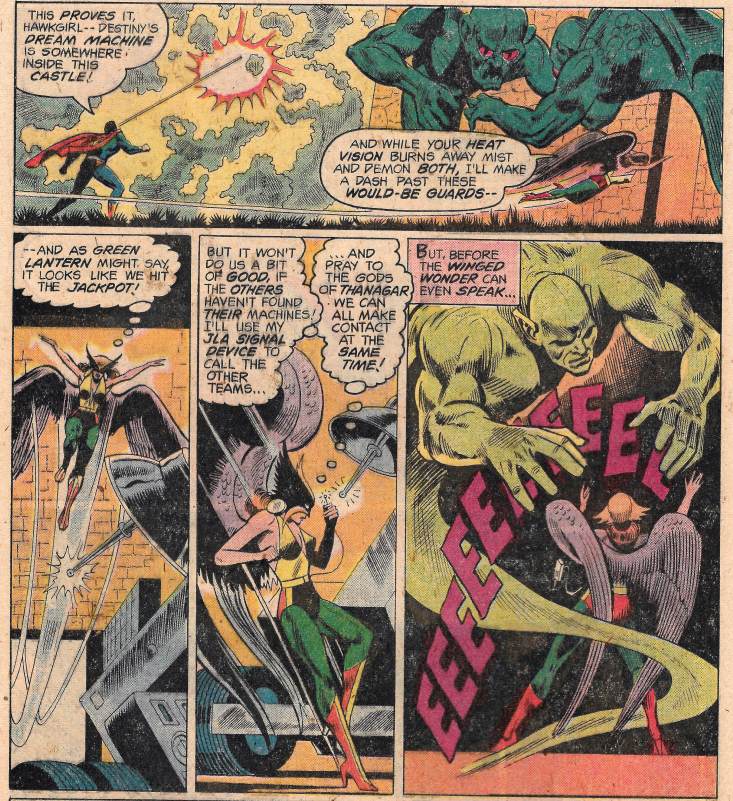 …in Bihar, India, Zatanna and Red Tornado discuss religion before being attacked by a crowd of people under the second dream machine’s influence. 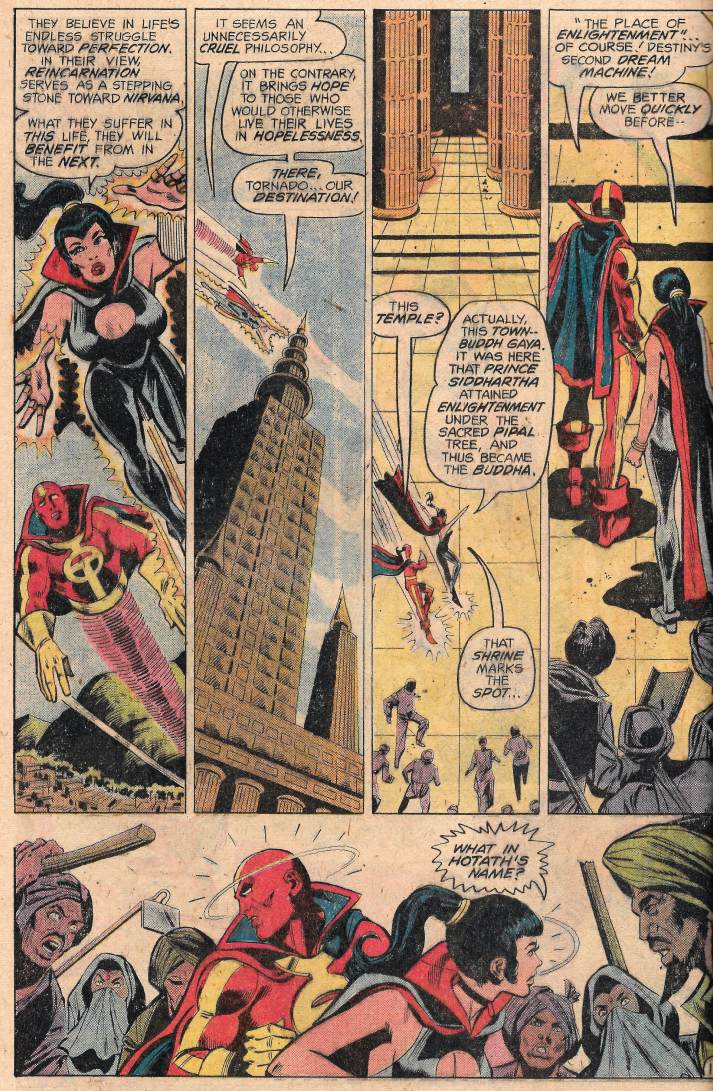 Between Tonado’s power and Zatanna making their clothes attack each wearer, they easily make it past their assailants… 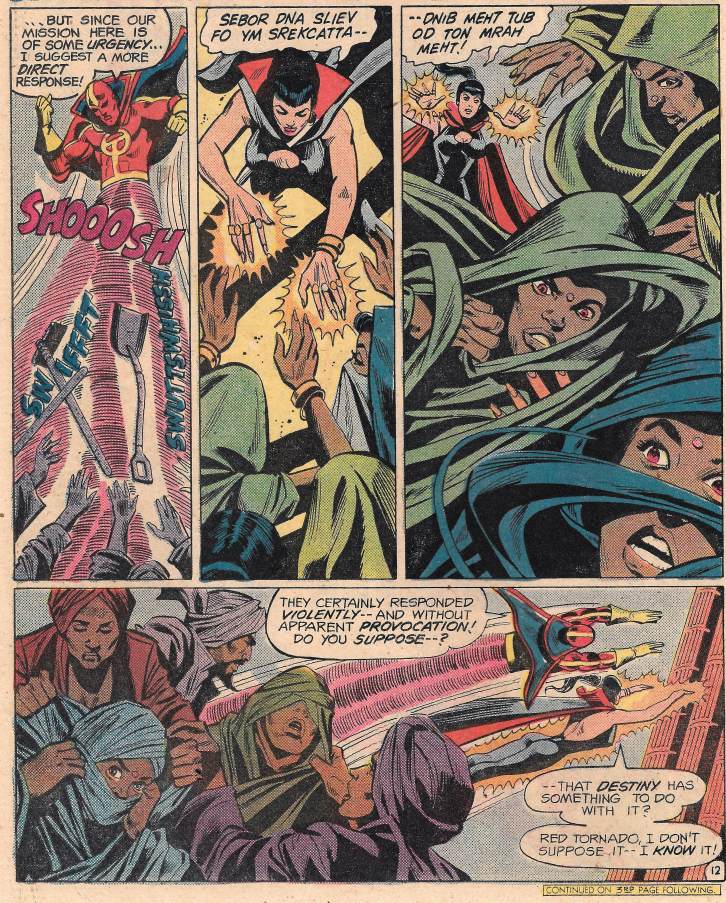 …only to find the temple itself has become a giant six-armed golem that will prevent them from entering. Moving on… 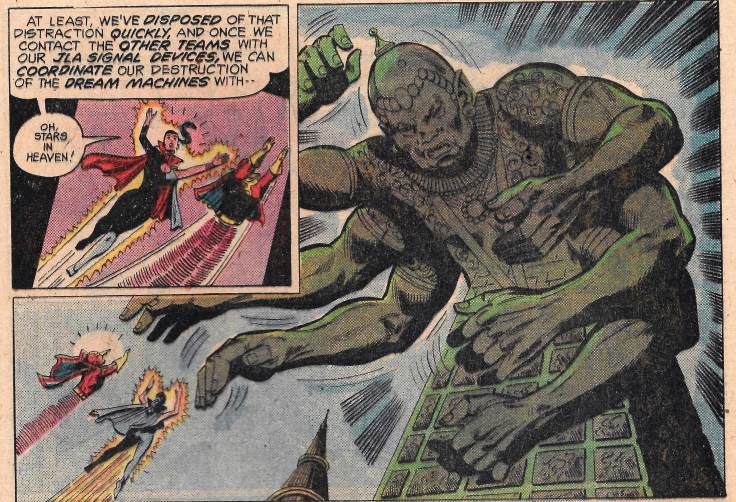 …We turn to Wonder Woman and Green Lantern Philadelphia where the Declaration of Independence was signed. Hal uses a giant green flashlight to look for dream machine interference, and after finding none, he tells Wonder Woman everything is safe. Then giant robot hands tear through the doors to grab them.
While all this is going on, Doc D wakes up and notes the time while laughing at the thought of the world soon going bonkers. Which is just silly since ALL is machinations are easily dispensed with if the heroes just disbelieve in them. Which they simultaneously do, making the threats they face vanish.

A new challenge presents itself, however. Seems the teams live in pre-cellphone reality and their JLA transmitters fail them (of course) at exactly the moment they need them the most. Where’s Martian Manhunter when you need him? 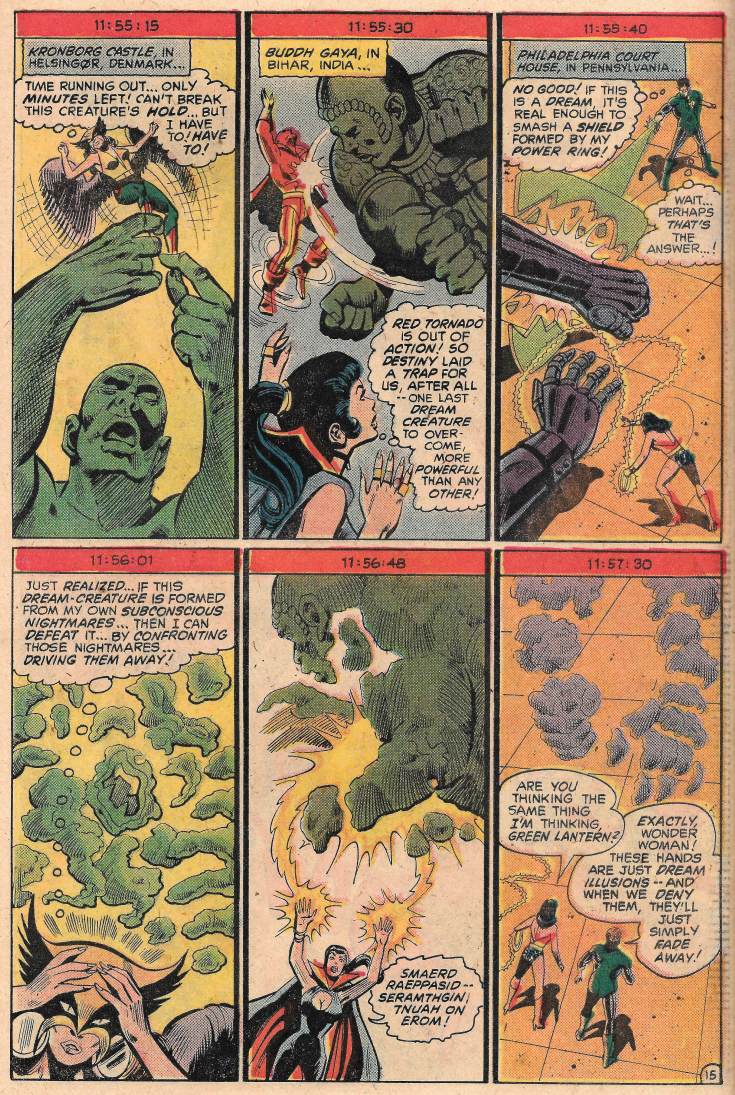 But they decide to just wait until the very last second and destroy the machines then because at that moment it doesn’t matter if their teammates have succeeded or not, the dream machines are about to go active. 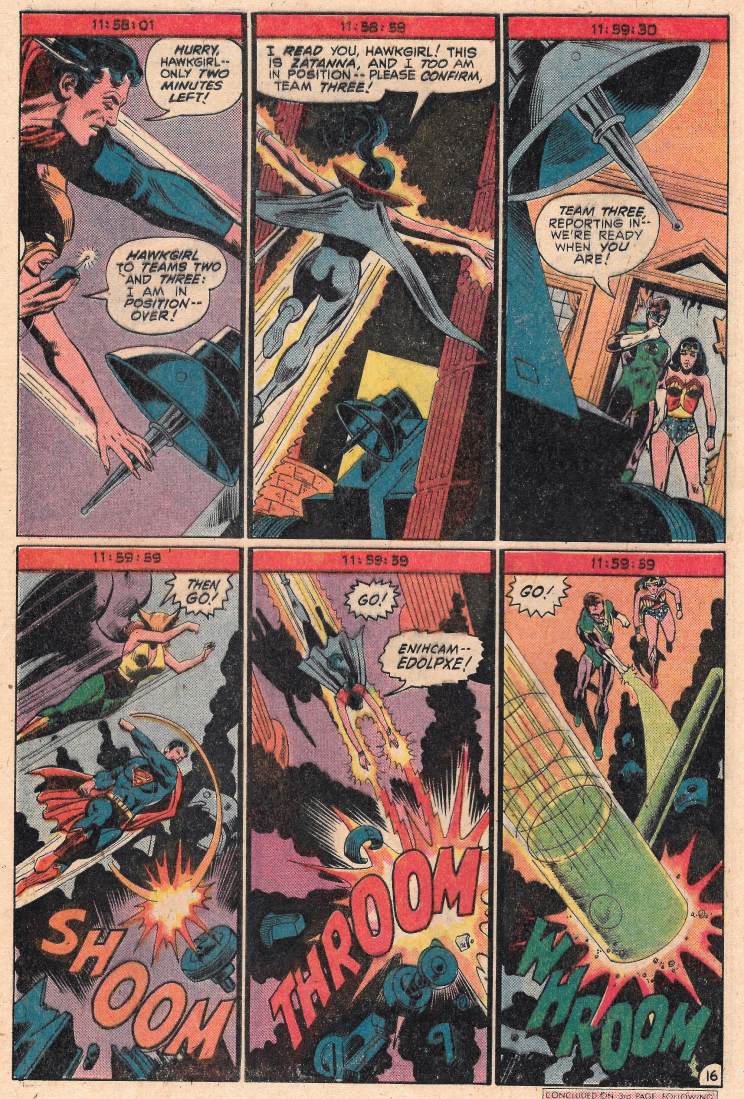 The leaguers confront a celebrating Doc Destiny who cries like a little baby and crumples up in a forward facing fetal position when told his master plan failed. It’s all very dignified, I assure you. 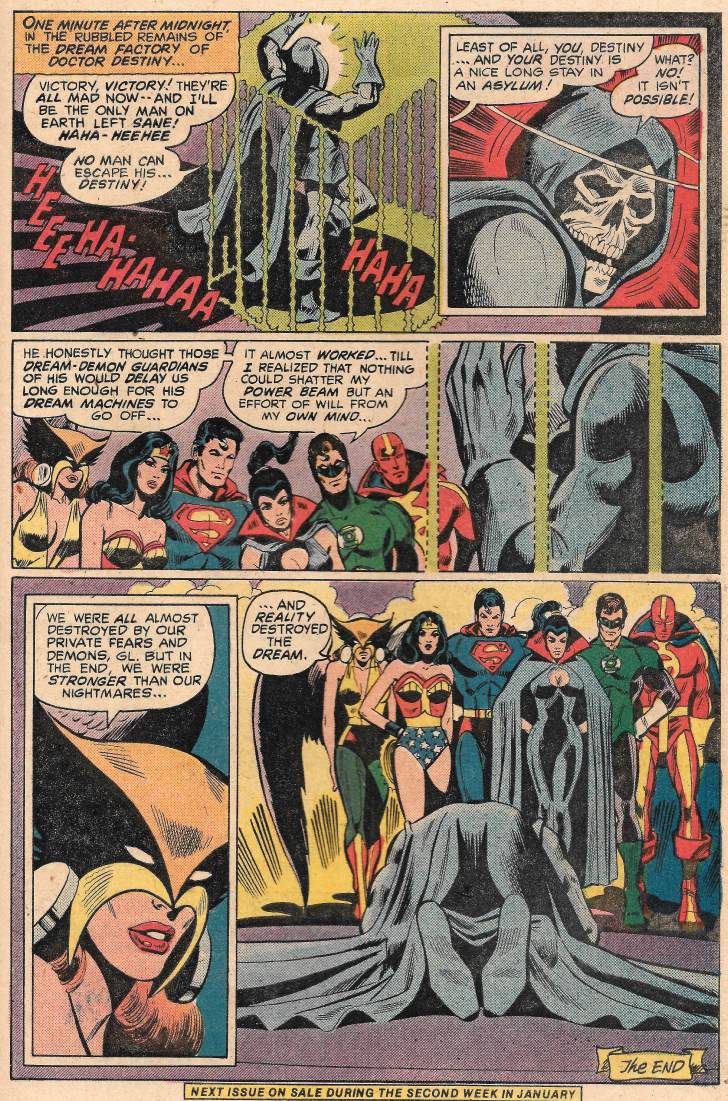 And as we fade out, Hawkwoman has the last word mentioning that they were almost destroyed by their fears and demons…except they weren’t. At no point did this feel like Destiny had the upper hand on them. The dream creatures were easily ignored and after doing it once, you’d figure the leaguers would be smart enough to continue disbelieving in them to get past them.

Also the whole reason to disarm the machines was to stop them from creating the dream-demon illusions, which THEY WERE ALREADY DOING. And brainwashing the local populous. They were already turned on and working…so what exactly were they stopping? Were the machines on ten and they stopped them from going to eleven? Why did Dee need to test them at all? It’s all rather convoluted.

Not my favorite story of Doc Dee at all.

As an aside, and I know this isn’t the season for this, I thought everyone would enjoy this page from the back showing the Marvel and DC softball results. 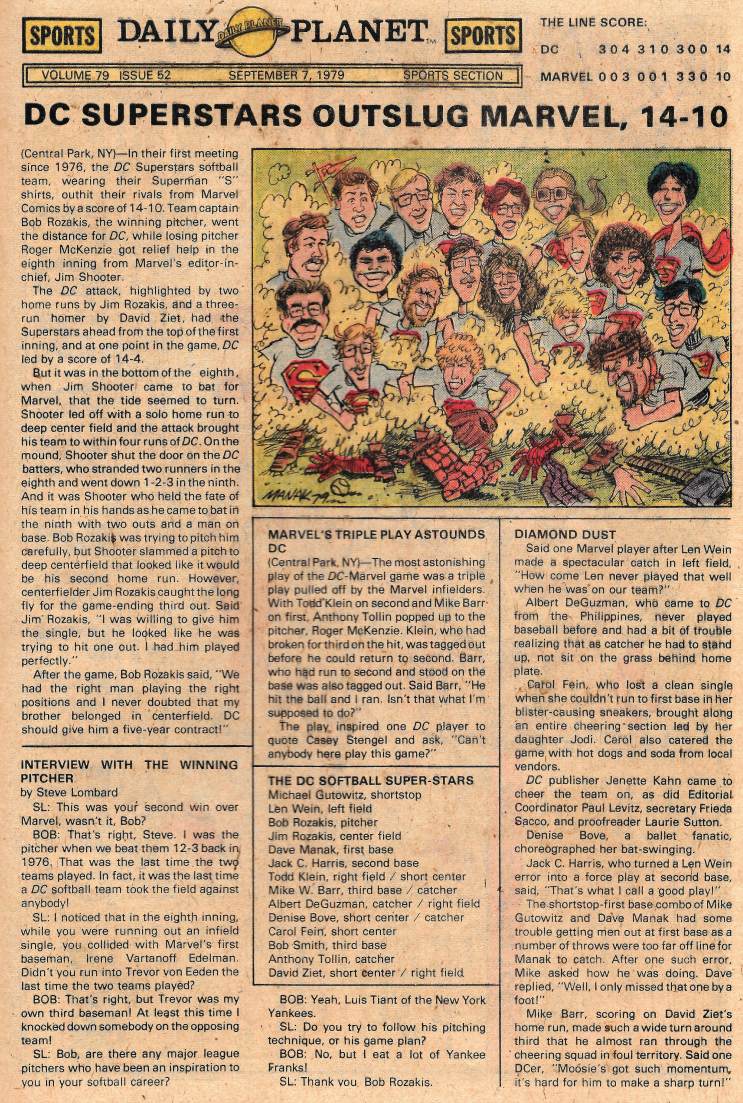 I’m not a sports fan myself, but it is kind of fun to read about coming from the bullpens of the top to companies in comics going at it on a baseball diamond.

And while Thor Ragnarok looks on track to trounce the Justice League movie in box office receipts overall, it feels good to post news of DC beating Marvel somewhere else. For fans of the series, if you haven’t seen the movie go check it out!

I’ll be back soon with more JL related stuffffffs!, so keep an eye on the Crapbox. We’ve been doing old-school goodness, but there are other stories that the Crapbox is spitting out now that need to be addressed
Posted by SonOfCthulhu at 4:04 AM