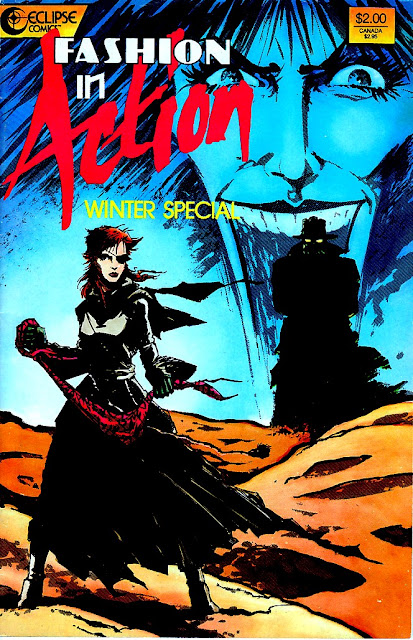 Beginning as a backup feature in Eclipse comics' Scout book, Fashion in Action charted the exploits of a group of well-dressed female celebrity protection agents. Years before V.I.P., this five member team got two solo shots at being “in style”; a Summer Special issue followed by a Winter Special issue. Unfortunately for them, the books never made a splash with comic buyers. I’m not sure if I found this issue in the discount bin or hanging on the clearance rack.

Wherever it was located, Fashion in Action was created, written, drawn and inked by John K. Snyder III. Snyder’s done work all over, although frankly I don’t remember most of it. He did a Dr. Mid-night painted series that looks interesting and he’s done comic covers for a variety of DC and independent books as well as interior runs on Suicide Squad and Grendel. His style in FiA is too heavily shaded for my taste, but it could be that my eyes are still healing from having to look the ultra bright panels in J.U.D.G.E. For the record, this makes the second book with a paper doll page in the crapbox. Maybe there’s a connection between paper dolls and the quarter bin? 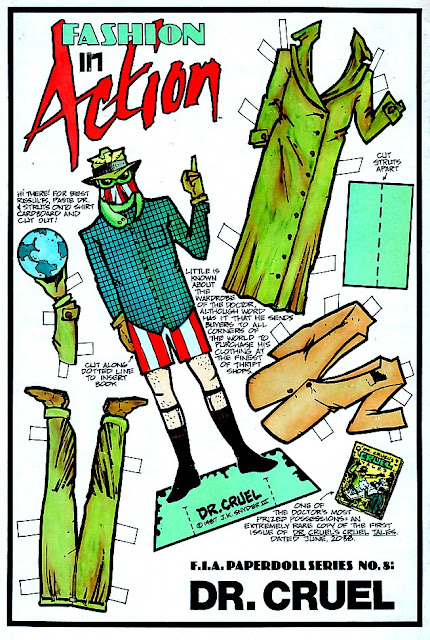 The story in this issue concentrates on the leader of the FiA team, Frances Knight. Frances has it rough. She’s become the target of a media smear campaign over something that happened while she was a foreign correspondent seventeen years ago. At the same time, her arch enemy, Dr. Cruel, has issued her an ultimatum: either she turns herself over to him or her fellow FiA agents will be placed in jeopardy. Not the TV show. These two plotlines are both sewn up in this issue, and even though the stories progress simultaneously they are fairly easy to follow. The only drawback to both stories is that Frances is mostly Fashion "Inaction", allowing events to just unfold around her instead of actually doing anything to affect what’s going on.


We begin with a reporter named Mark being given an assignment to interview Frances Knight. A magazine called “Bleed ‘n Die” has released a cover story outing our FiA leader as a murderer. The story cites her as the killer of a special forces commander named T.C. “Spike” Karson who was gunned down while assisting freedom fighters in a third world country called Ghudana. Frances asked specifically for Mark because she believes he will tell the real story of what happened. As Mark takes the assignment, we switch to Frances at the Fashion in Action headquarters. 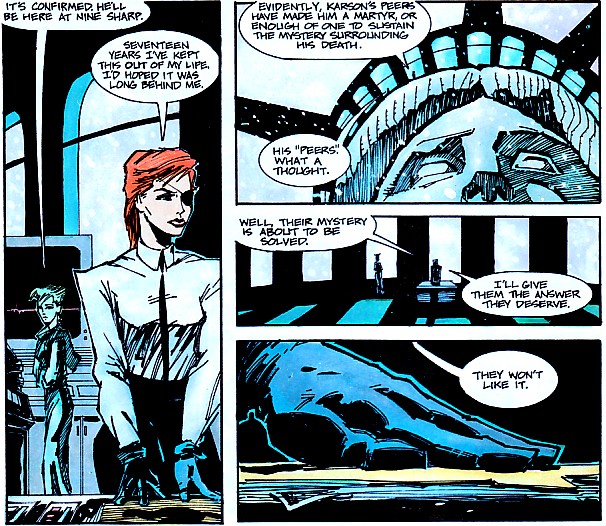 Notice that Snyder’s art in this book has a touch of old school Chaykin. It’s got that same angled look to many character features. Also notice that FiA’s headquarters *snicker* is in the crown of the actual Statue of Liberty. This is suppose to take place in the future, so I guess anything’s possible. I just feel really sorry for the guys leasing out those two floors where Lady Liberty’s butt cheeks are.

Frances has already prepared for Karson’s story to break. In fact it appears she’s been ready for years. What she isn’t prepared for is a surprise video call from her arch-enemy, Dr Cruel.

Frances acquiesces to Cruel’s demands. I mean he’s threatening everything she loves, which includes the F.I.A. crew, several cute puppies and Celine Dion. Maybe she could hesitate just enough for that last one to…sorry, on with the story.

That’s the basic setup of the two tales. Mark spends his time with the rest of the FiA team at the Statue of Liberty going over the sordid tale of Frances’s involvement in Karson’s death. Meanwhile Frances herself is whisked away to Dr. Cruel’s hideout in some ancient Egyptian ruins. Since the stories cross over every page, I’m going to break with tradition and tell each one straight through instead of following the book. In the book each is clearly told, but I don’t want my review be a confusing back-and-forth jumble because of which cronological story element I’m focusing on.

Let’s start with the contents of that manila folder that the FiA team gives Mark. It relates a story of Frances as a journalist in the poor African country of Ghudana. The Ghudanaise government has gotten sideways with this major U.S. corporation by imposing taxes and enforcing labor laws. Suddenly a group of “freedom fighting” rebels springs up with designs to overthrow the government. It appears the company will stop at nothing to keep its profits secure. Frances begins covering the story by tagging along with a group of government troops. This ends up being a bad idea. 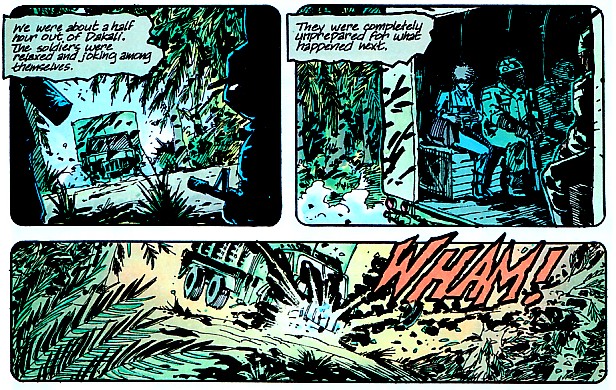 That’s one heck of a blow-out. Any troops that survive are surrounded by rebels lead by T. C. “Spike” Karson, the guy Frances will be accused of killing. Frances is led back to their camp while the troops get a one way ticket to the bottom of a ditch. This of course is courtesy of their captors and a bullet to the back of their skull. Karson’s guys may be ruthless, but they are too small in number to pull off a coup. When Frances points this out, Karson shows her his backup plan.

That kind of backup is sure to leave plenty of civilian causalities. But our government wouldn’t kill innocent women and children without some kind of clear threat to its own existence, would it?

Corporate dictated overthow by U.S. military operatives of third-world governments leading to the slaughter of thousands of innocents hiding behind alleged weapons of mass destruction charges all to uphold profits…why does all this seem so familiar? Being that the book was written in 1987, Snyder seems like a modern-day Nostradamus. Frances tries to leave their camp at this point but she’s prevented by all those guys holding guns. She’s locked up in a secure hut and force to listen to Karson prattle on. I think that’s outlawed by the Geneva Convention under “cruel and unusual punishment.” 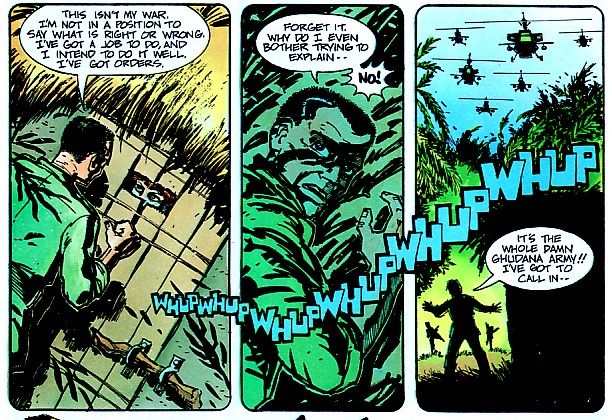 Then the Ghudana Air Forces show up playing the theme from Apocalypse Now. They blow up his camp and forces real good, although missing him, his radio, and only blowing up Frances’s shack, freeing her. As Karson struggles to make it to the radio and call in his air strike, Frances begins beating him to death with a handy stick. Karson takes umbrage to this and pulls a knife on the poor girl. She blacks out as Karson starts working her over. How does it all end up? 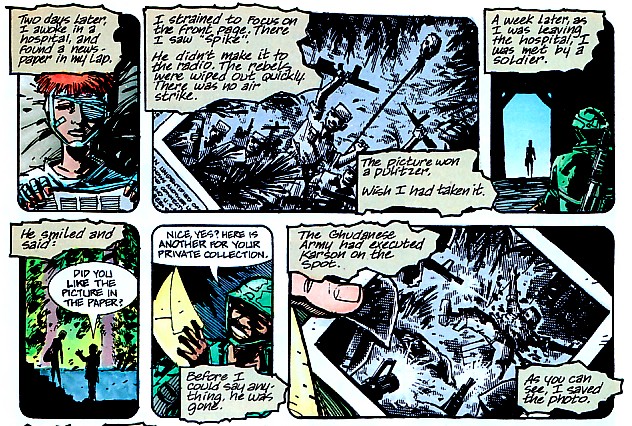 That’s a nice tidy wrapper there. We learn how Frances lost her eye, saw Karson get what was coming to him and now have proof that Frances wasn’t Karson’s killer. Except she sort of was. The photo was faked using Karson’s dead body by grateful government troops. Frances had already shot him when he first made for the radio. Only FiA member Kelly knows this story and she doesn’t tell anyone until after Mark leaves. Great ending, now what about that other pesky story concerning Dr. Cruel?

So skipping back to the present we find Frances in the care of a sympathetic henchman while rocketing away to Dr. Cruel’s hideout. Seems Frances killed Dr. Cruel’s love interest in FiA Summer Special. Said love interest being an insane young lady by the name of Roxanne. Frances’s driver wasn’t too crazy about Roxanne either. 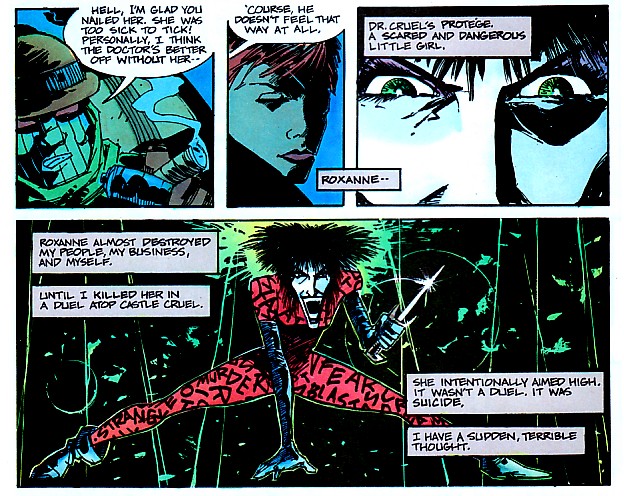 I’m really holding back on singing The Police right now. I know everyone is glad for my restraint. Roxanne looks like a red version of the Riddler’s costume mixed with equal parts Joker, Electra and Typhoid Mary. If there was some kind of runway-off between her and Frances, I know who I’d place my money on.

It also becomes apparent that Roxanne was suicidal and lost the battle with Frances on purpose. Dr. Cruel can’t accept that and has decided to resurrect Roxanne using magics from the ancient Egyptians. It’s also clear that he needs something from Frances to complete the concoction. I wonder if he’s a practicing doctor? Cause that knife looks awful sharp. 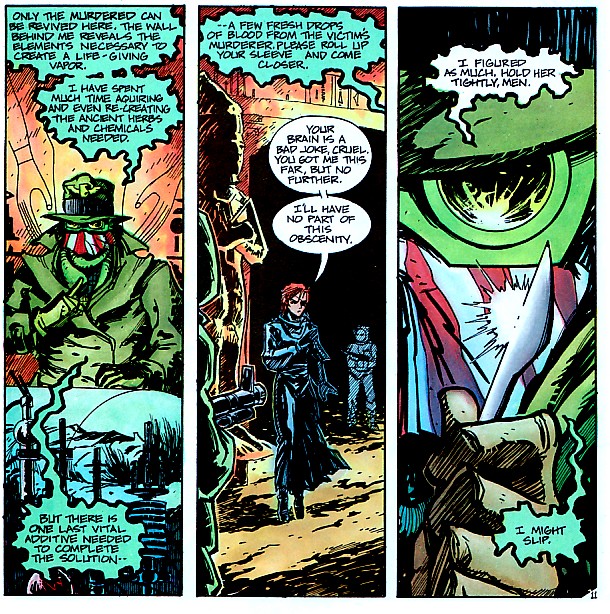 His potion obviously doesn’t smell like pine scented air freshener. Notice Roxanne’s “eww” face here. And she’s been dead for several months. Whatever that green cloud is, it smells worse than months of dead woman B.O. 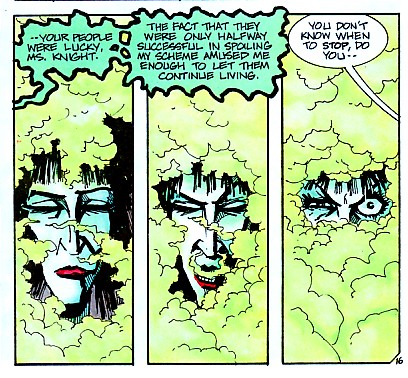 Roxanne bursts out of the glass coffin-type-thingie and starts strangling nearby henchmen. Dr. Cruel tries to kindly rekindle her memories, but no dice. Talk about ingratitude! You’d think Roxanne would be happy to be alive again. That’s what you get for thinking. 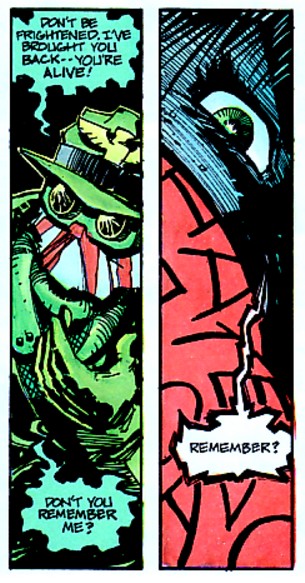 No, Roxanne wanted to remain dead. That’s kind of why suicides kill themselves in the first place. And fighting Frances was all part of her plan to leave this Earth without having to pull the trigger herself, so to speak.

Roxanne picks up Dr. Cruel and tosses him into this giant Erlenmeyer flask holding the rejuvenation formula. This releases more fumes that end up melting Roxanne like a dime-store candle. 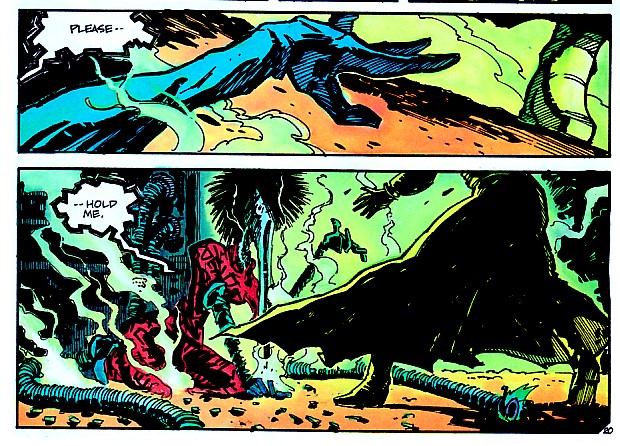 No way! I’m not holding anyone that can’t hold themselves together. It’s like that dude that gets sprayed with toxic chemicals at the end of Robocop. Yuck and good riddance. Frances then strong arms Dr. Cruel, who is completely busted up from his fall. She leaves the bad doctor alive, heartbroken and crying on the floor while the temple burns down around him. 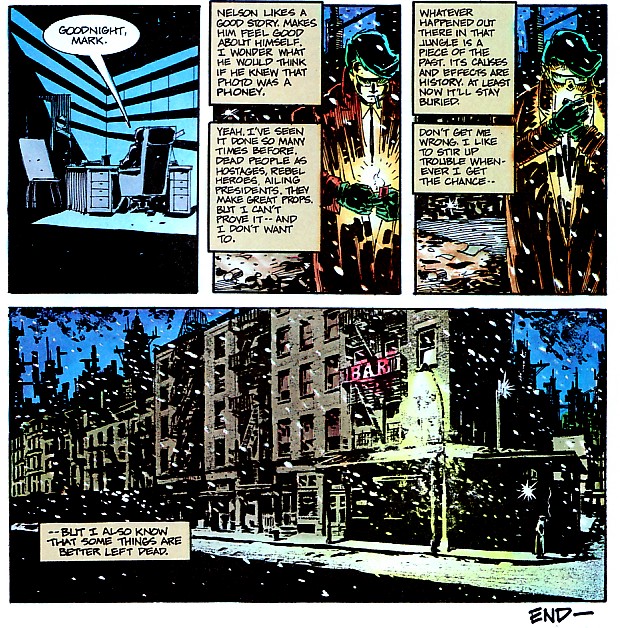 We end as we begin, with Frances and FiA reunited and Mark taking his story back to his editor. Appears even Mark recognized the picture for what it was. However, he keeps this information to himself. The issue is kind of old-school goodness. A nior-ish take on a future that hasn't happened. I like the characters and the story. Sadly that title probably kept it from becoming an ongoing. The title or that paper doll on the back cover.

Posted by SonOfCthulhu at 2:52 AM