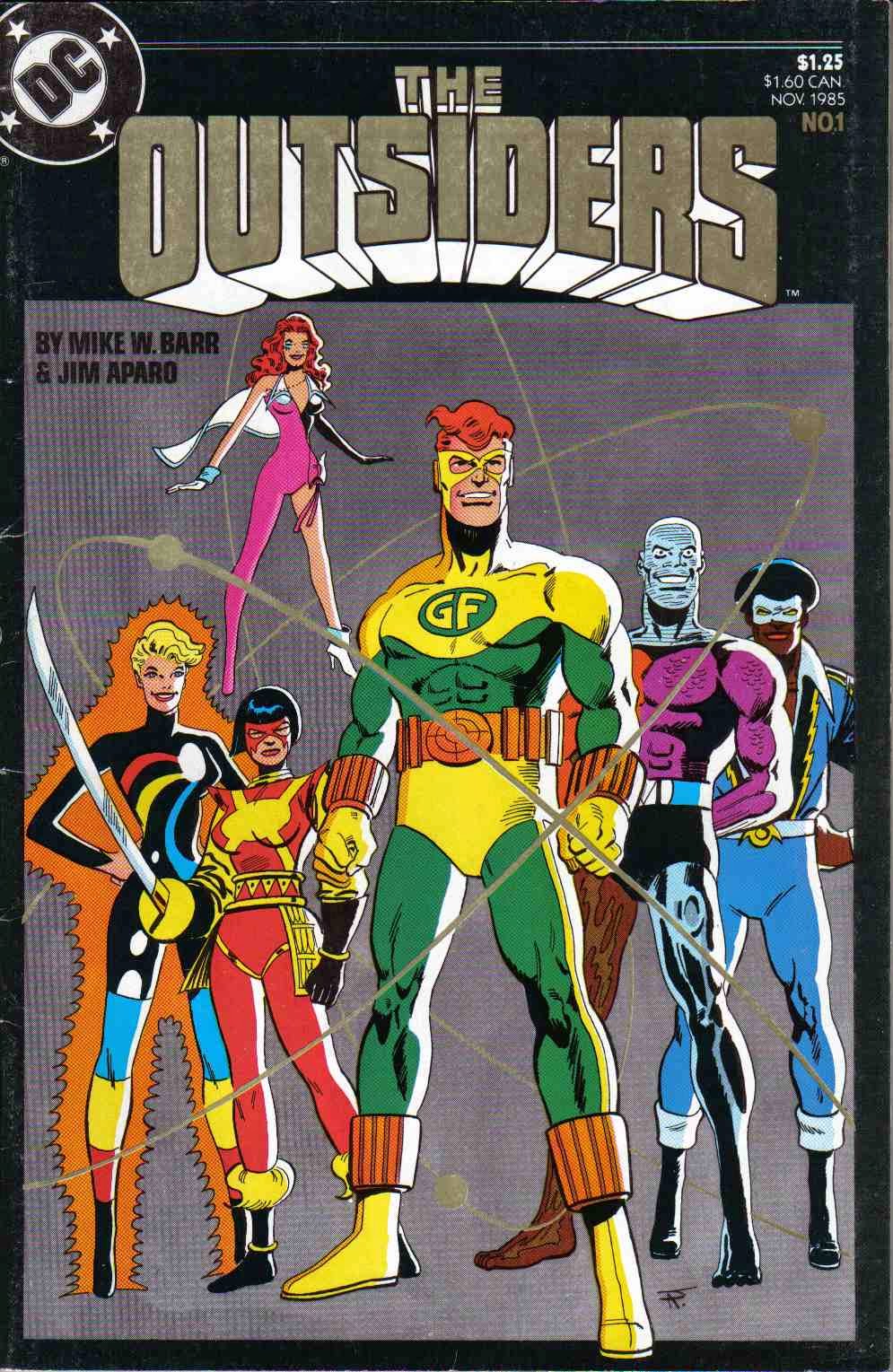 I have a lot of love for Jim Aparo. He drew the character Batman for almost 30 years in books like The Brave and The Bold, Batman and the Outsiders, Batman and Detective comics. All that Batman while continuing to handle tons of side projects. For a generation of Bat-fans, Aparo’s art was the standard by which other Bat-artists were measured. I take my hat off to any artist who can provide enjoyable comic art to readers at a rate that allows books to ship on time. I wish more artists were like Jim Aparo.

So it is with great reluctance that I make fun of Aparo and writer Mike Barr’s Batman-less prestige format The Outsiders. But make fun of it I do.

It’s the outfits, folks. I’m thinking that it’s impossible to find a more heinous grouping of fashion mistakes joining up for one superhero team. And that includes Rob Liefeld’s Pouch Force, who’s outfits completely cover the wearers in pouches from head to foot. 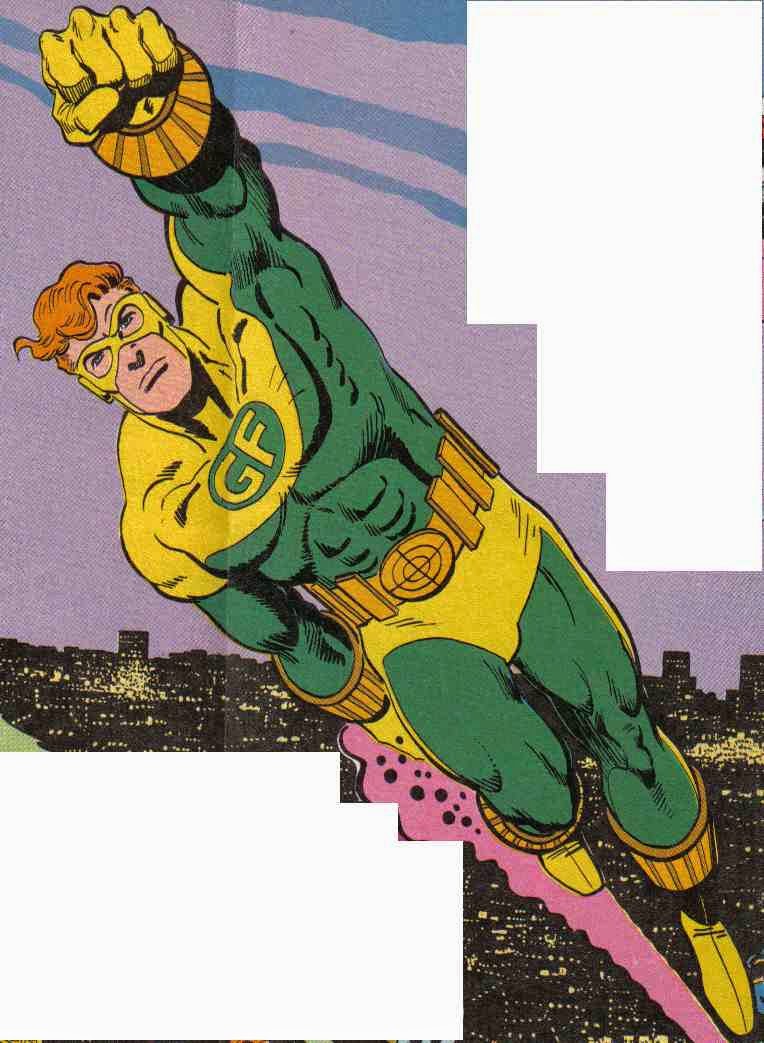 So GeoForce has all the powers of planet Earth itself, from scorching lava beams to gravity based powers allowing for flight. He’s also super strong, like a big pile of rocks. Yet this costume doesn’t rock at all. It’s a pansy-ish green and yellow mess with a huge GF in the middle. Since he’s a lesser known character, there’s a whole list of things we could confuse those characters with:

It’s not a wise costume scheme to use for a third-tier character.

Next up is the team’s energy projector: Black Lightening. 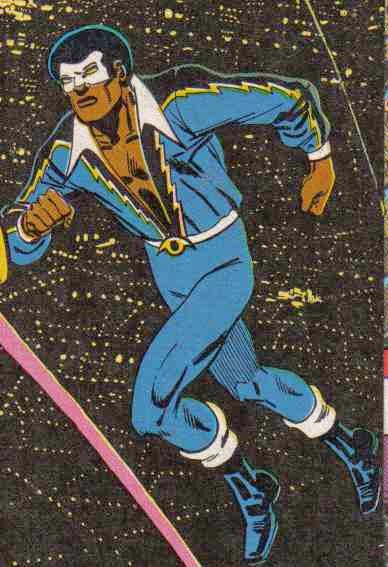 He’s a cool character but his outfit screams Saturday Night Fever reject. Look at those wide giant collars. And what’s with his shirt front being cut down to his navel. If he’s going to do that, might as well put on some Hammer pants and some Bling.

To finish up the males in our cast we have Metamorpho. 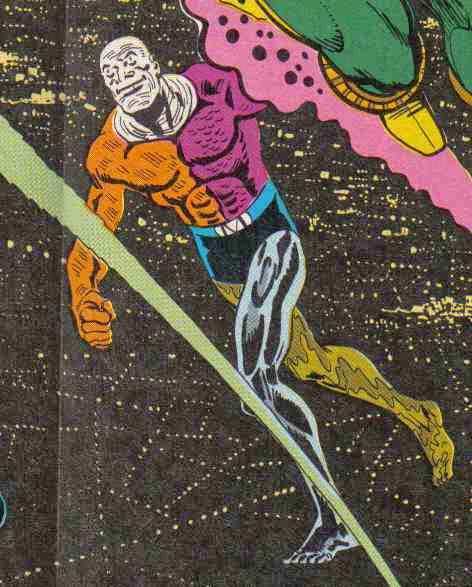 Again another great character who chooses to look as goofy as possible. Metamorpo can change into any element in the world, yet he while superheroing he makes his body look like a badly made puzzle. One leg is mud, one leg is steel, half his upper body and one arm is fish scales (fish scales is an element?), the other half body and arm is dirt while his face and head is white rock. Yay, I want to be a superhero so I can dress like grandma’s quilt. At least he covers himself with a pair of black shorts.

To start off the women of the Outsiders, we begin with Halo: 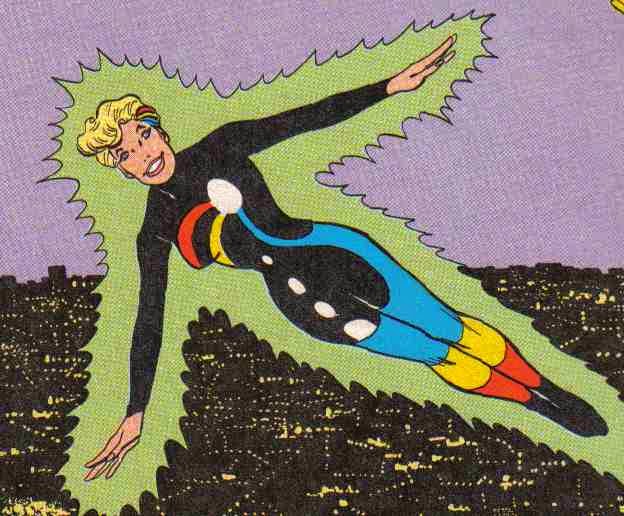 Halo’s a teen. Which explains those streaks of red and blue to the side of her head. Teen girls are constantly screwing with their hair color. In fact, the hair color argument goes along way to explaining the rest of her costume too. Allowing your head to marinade in those chemical dyes for so long is bound to make you think a black unitard with some goofy swirl pattern is the best costume to fight crime in. Mystery of crappy costume origin solved. So maybe she has an excuse for looking like a bad yard flag.

Looker. Heh, I’m saving her costume review for issue 2. It may take several paragraphs to dissect. Here’s a quick look at Looker: 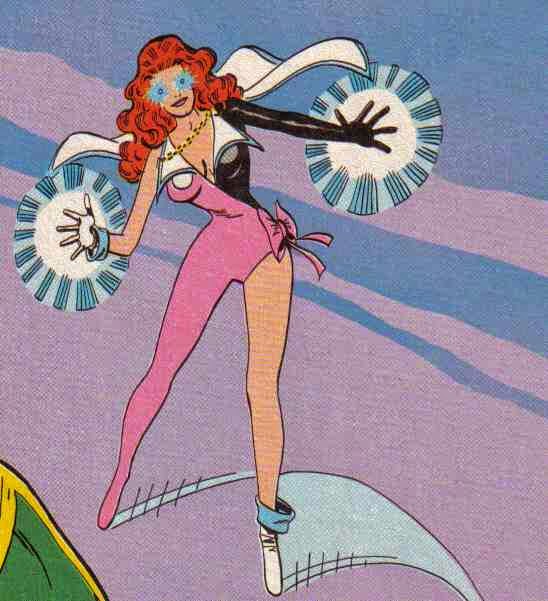 Last in line is Katana, the resident hot ninja chick: 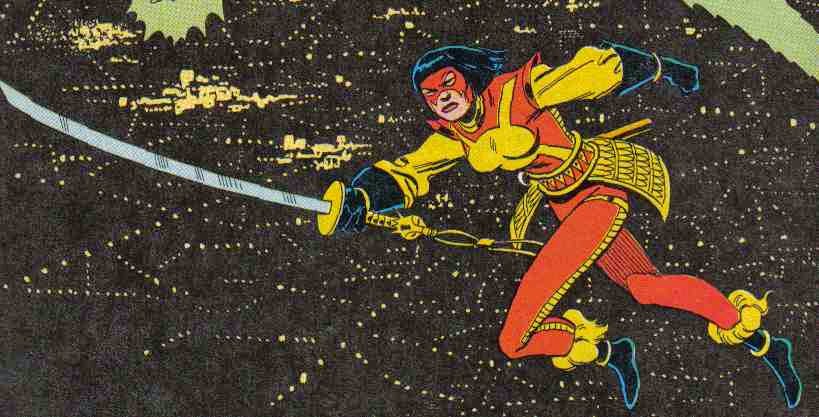 Katana’s costume actually kicks butt. I’m not sure why she’s hooked up with these fashion losers. She’s JLA worthy in this getup.

So with the important stuff out of the way, let’s get down to the storyline in the issue at hand. The Outsiders have split from Batman and are making a go of it with new member Looker. Their first task is to defend a nuclear power plant from a terrorist attack. Sounds like a good start for a team book. Then they bring in the terrorist’s agents to destroy the plant. 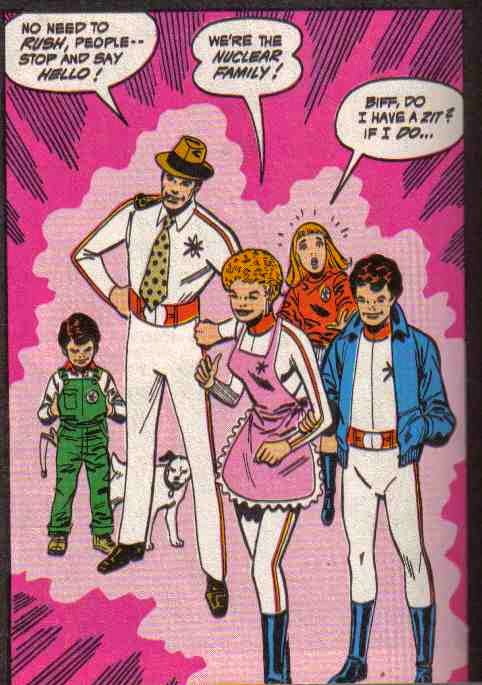 The object here must be to come up with villains who’s outfits are dorkier than the Outsiders. I must say that they success brilliantly here. I would never have thought to model a villain after J. R. “Bob” Dobbs from the Church of the SubGenius. Nor one that looks like June Cleaver, complete with half the cast of the Brady Bunch. Devilishly clever guys. After they blow up the reactor, they are going to slack off and bake cookies. 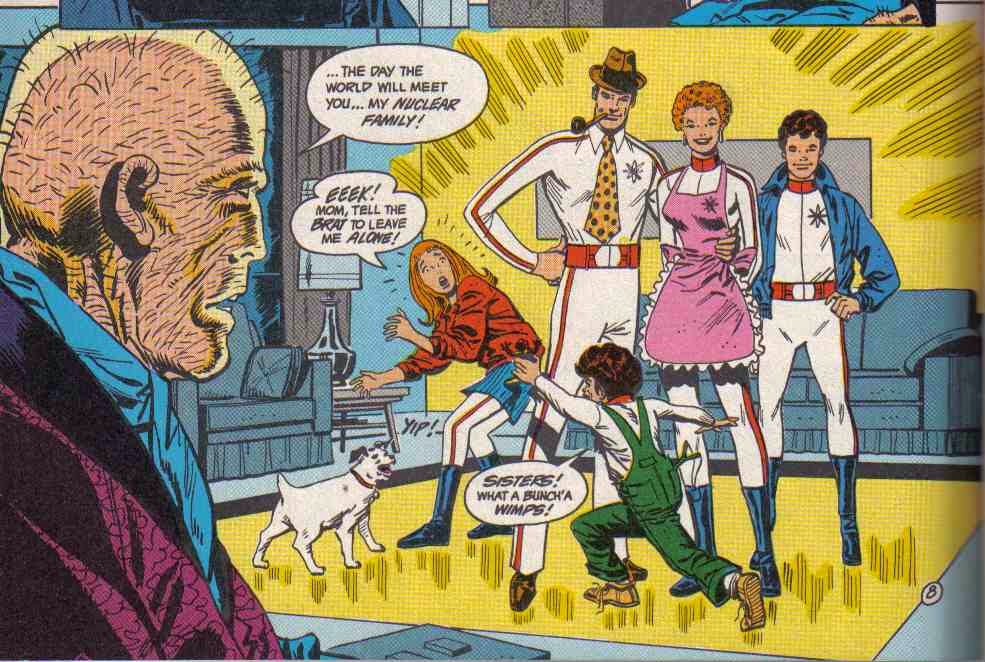 Nuclear Family is lead by this wrinkled face old man who lost his own family by lethal dose nuclear radiation. Appears he’s dying of it too. Yet he still has time to plot out how to attack a nuclear power plant to kill a bunch of people and show them how horrible it is to use nuclear power. The safe kind that doesn’t kill anyone. Oh, and he’s hooked up with an environmentalist that doesn’t know he plans on killing anyone, she just thinks they are going to take over the plant in protest.
The day the plant opens, The Outsiders are…outside it. Maybe it’s just what they do? Anyway, suddenly ninjas attack. I’m serious too.

Metamorpho takes a couple down by turning to a giant tar baby, proving that Song of the South should be let out of the Disney vault as it has redeeming educational value. One of the ninjas get a shot off, leading to… 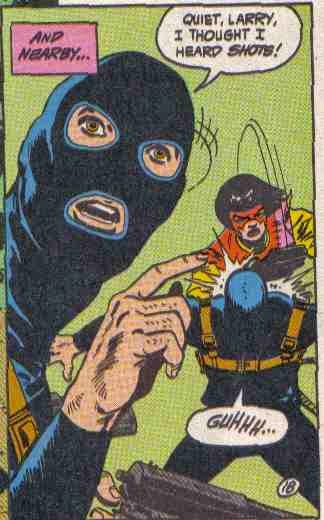 So they are quite probably the worst ninjas in the world. So what? You try to find good ninja terrorists to take the fall for you on an environmentalist’s paycheck and see what you come up with. And don’t start about all the money I spent on those Sheryl Crow CDs. She’s against greenhouse gasses so they don’t count as personal purchases! It’s totally work related. Even Tuesday Night Music Club.

All of this ninja fighting leaves the Nuclear Family free to break in and sabotage the plant. Before anything too drastic happens, The Outsiders rush inside and Halo knocks them all unconscious. Dr. Jace, the team’s friendly neighborhood scientist determines that the Nuclear Family are actually robots, but are too sophisticated for her to tamper with or add a tracer to. At this point, Looker has an idea! 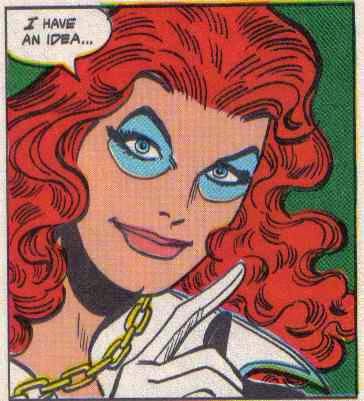 I do too, honey. Stop getting your makeup advice from Tammy Faye-Baker. Put down the eyeliner and step away from the mirror. Shesh!

Looker’s idea is to substitute herself for Mamma Nuclear and allow the team to follow her back to their hideout. The team agrees and away she goes. 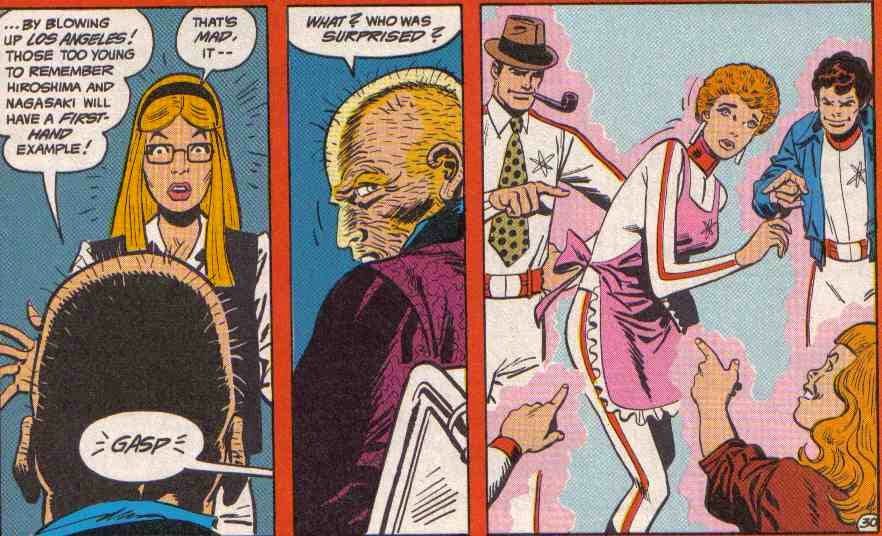 Her plan doesn’t go so well, as prune-face finds out she’s not a robot when she gasps upon learning of his plan to nuke LA using the Family. Score one for Looker! Our environmentalist isn’t to keen on the idea either. The issue ends with Looker in the villian’s wrinkled clutches.
Posted by SonOfCthulhu at 11:24 AM