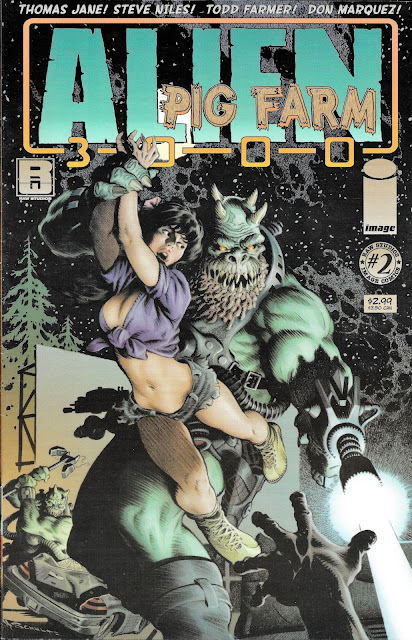 I am not sure what I was expecting when opening the cover of Alien Pig Farm 3000 #2. The title says it all though, really.

In the vein of the truth in advertising camp that brought us Snakes on a Plane and Killer Klowns from Outer Space, the book delivers EXACTLY what it says it does: a southern fried alien invasion tale done up like a wacky slapstick comedy.

It's actually quite good.

The brainchild of Todd Farmer (screenwriter of Jason X, My Bloody Valentine, and Drive Angry), Steve Niles (30 Days of Night and more comics than I can shake a stick at) and Thomas Jane (he was The Punisher in 2004 and made me cry in 2007's The Mist), you know going in that this isn't going to be a typical storyline. And what these three gentlemen concocted is ANYTHING but typical. Let me whet your appetite with the inside cover "bring you up to speed" box:

Reader beware! Within these pages awaits a story of lust (mostly un-natural), betrayal and heartbreak! A town under siege! A brother fighting to save the sister he longs to get nekkid with! Pigs will die! Women and children will be carried off into the night by meat-eating greenskins. Moonshine will spill! You will laugh, cheer and curse with a slight Southern twang. If Shakespeare were alive today he would golf-clap while shedding a salty tear. It's just that good!

I'd agree with much of that. What this odd troop have come up with is a blast to read. Plus when paired with artist Don Marquez's pictures, you get a tale that feels a bit Heavy Metal and also a bit wacky b-movie sci-fi cinema.

With only our box of text to guide us in, we find ourselves thrust into a barn watching step-brother Johnny Ray hiding moonshine in the cellar. He's being careful because his hubba-hubba sister might catch him and throw him out on his ear. 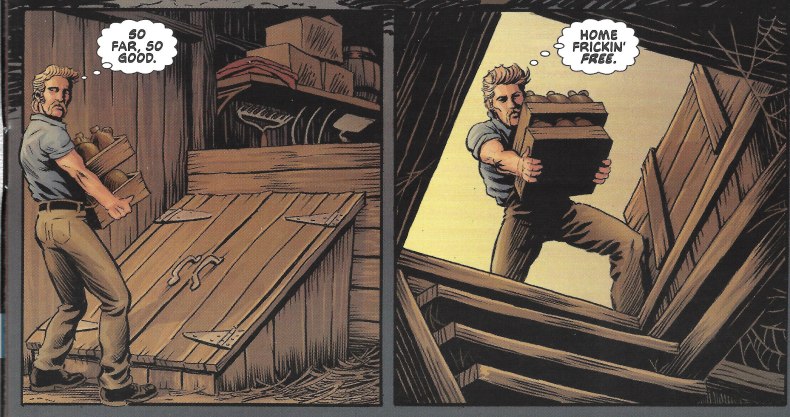 Johnny Ray having a thing for his sister bothered me for a bit. The book does everything to try and make this right. First off they are step-siblings and while that doesn't do much to ease my feelings around this, I have a feeling they will end up finding out one of them isn't genetically linked to the other.

Johnny's about to have a bit of trouble, however. The local po-po is pulling up to the farm house and our Deputy Clyde knows what Johnny Ray and his step-brother Elvis are up to. 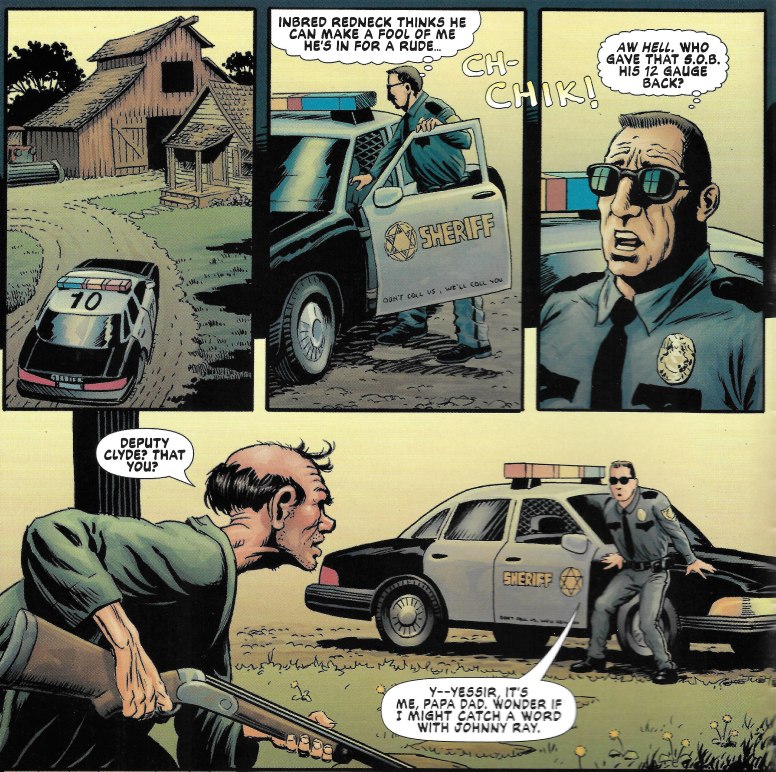 Papa Dad is such a great name. He calls out his daughter Cindy to deal with Deputy Clyde using the words that she has a "gentleman caller," thinking the Deputy is a great catch for his daughter. 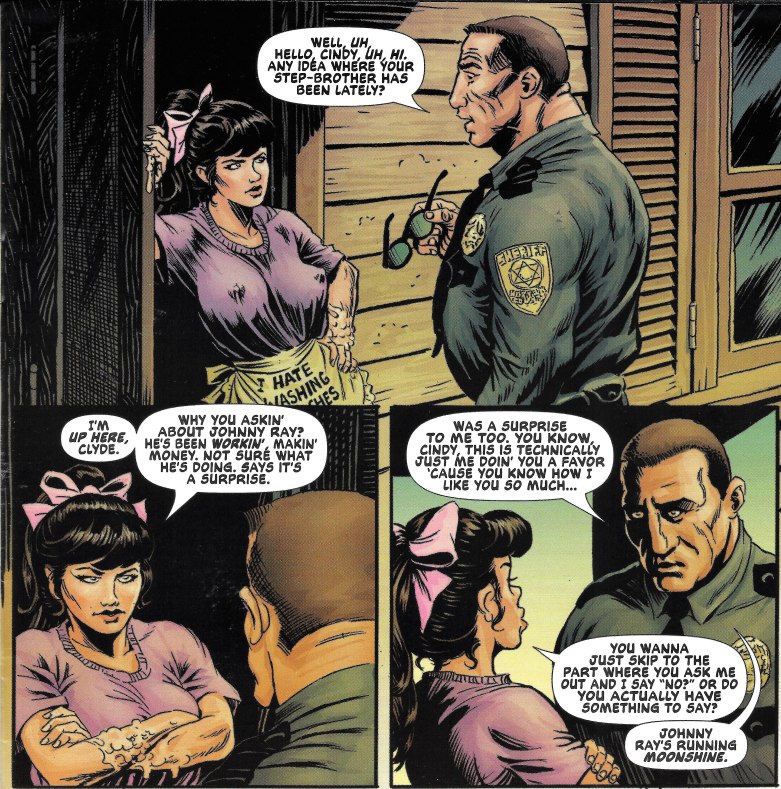 Great catch or not, Clyde can't seem to take his eyes of Cindy's goods and for that matter neither can I. I mean, those nipples are staring at me so it's only fair that I stare back. In truth, this is the old "farmer's beautiful daughter" cliché in a story full of clichés. That does not mean there isn't some fun to be had from backwoodsmen running moonshine vs alien monsters.

Oh, yeah. The Aliens. We'll get to them in a minute.

Right now, however, Cindy is going to toss Johnny Ray out on his ear for getting Elvis involved in the illegal moonshine scheme. Clyde lets that slip while discussing matters with her and she storms off to the barn to chew Johnny Ray out. 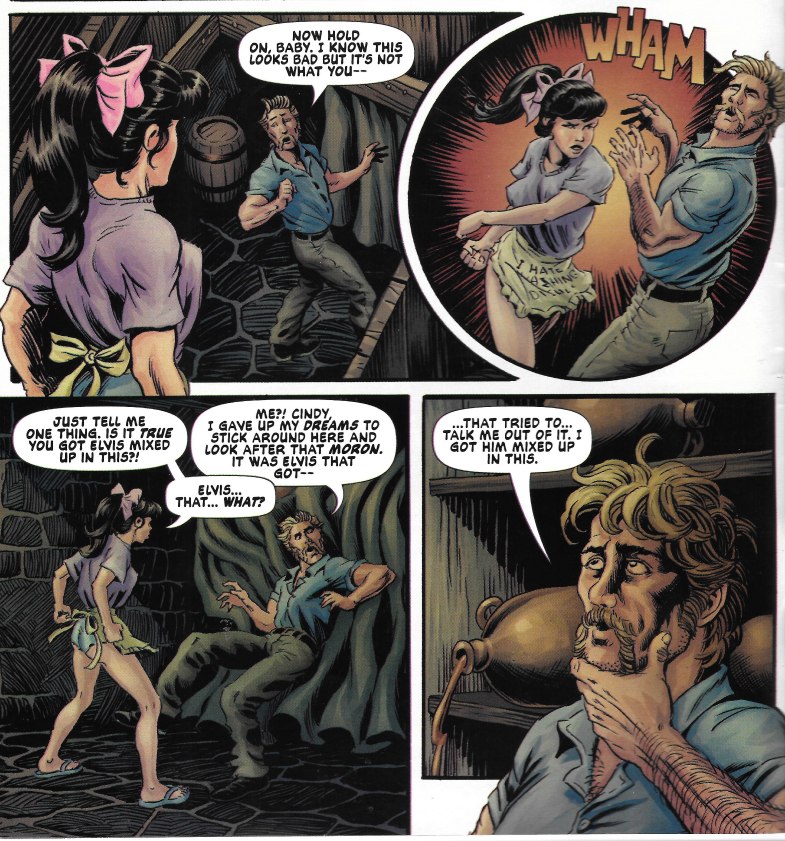 She catches him red handed hiding the hooch. Johnny almost lets out that it appears Elvis is the brains behind the moonshine scheme, but due to Cindy's overprotective feelings for her natural brother, he covers for Elvis. But covering for him, meaning Johnny Ray's butt is the one left exposed. 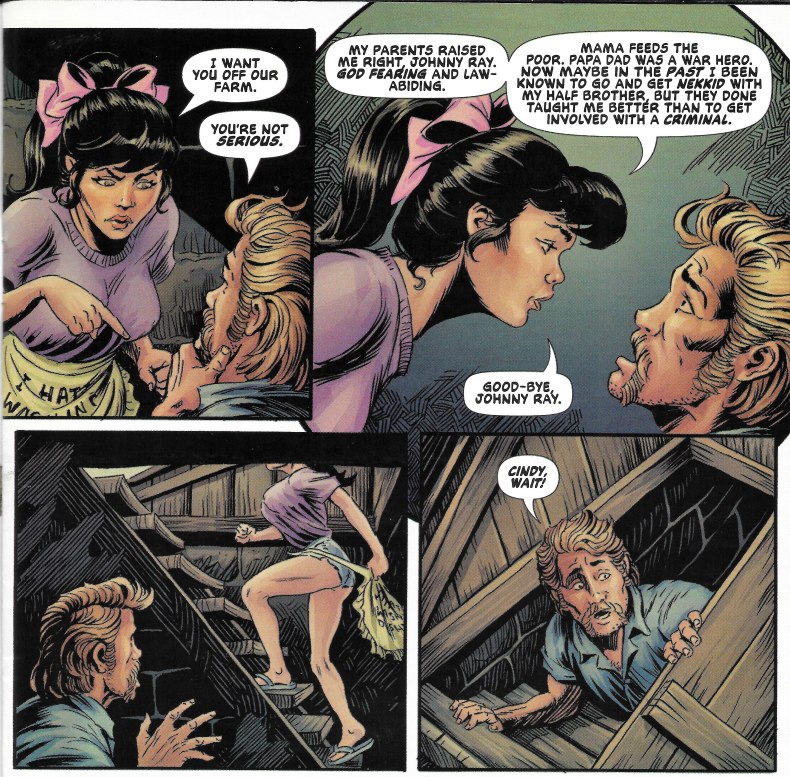 And with that she storms off, thanks the Deputy, gives him a peck on the cheek and takes off with him to the drive-in.

Which should be fine for Johnny Ray and Papa Dad (who can't stop singing the Deputy's praises) since they have a "heap o' trouble" heading their way. 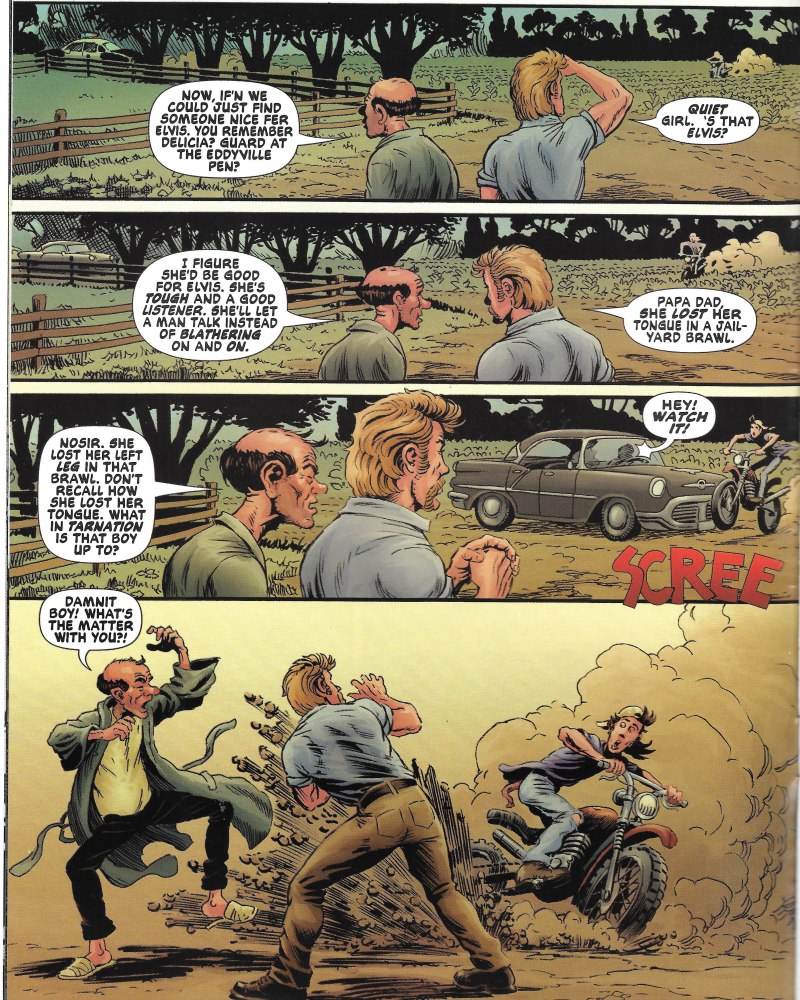 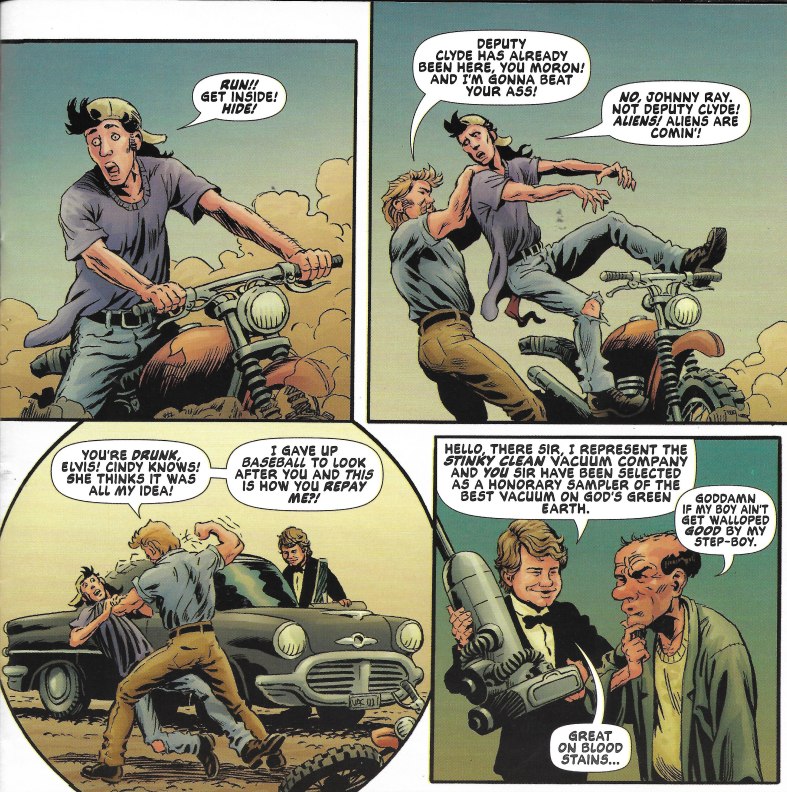 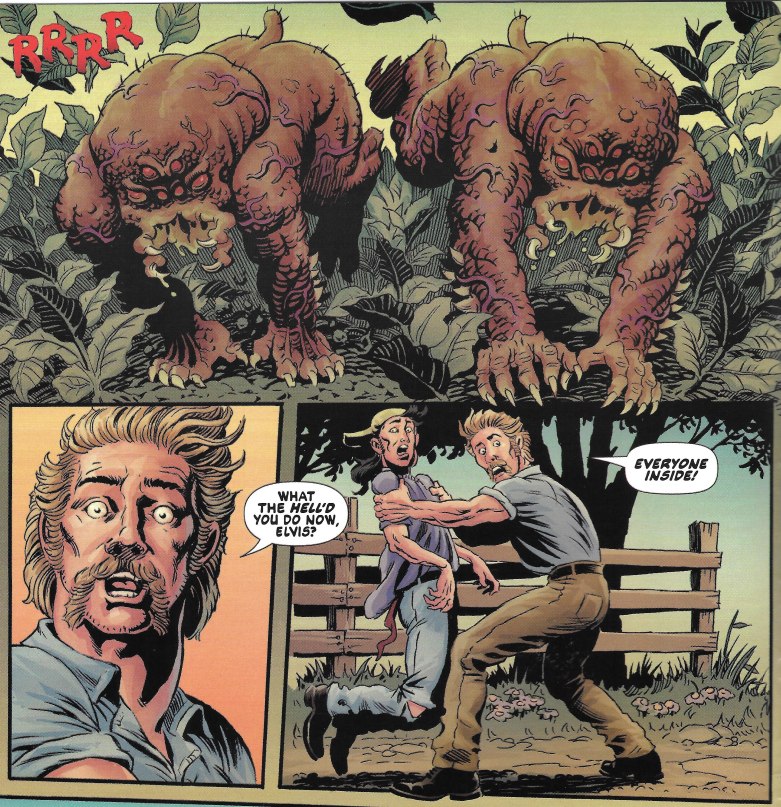 No. It's these alien dog things with predator faces and bodies of charging gorillas.

The build up to this scene more than any other tickled my little heart. It starts with Johnny Ray jerking his brother along. And then the vac-sales guy… 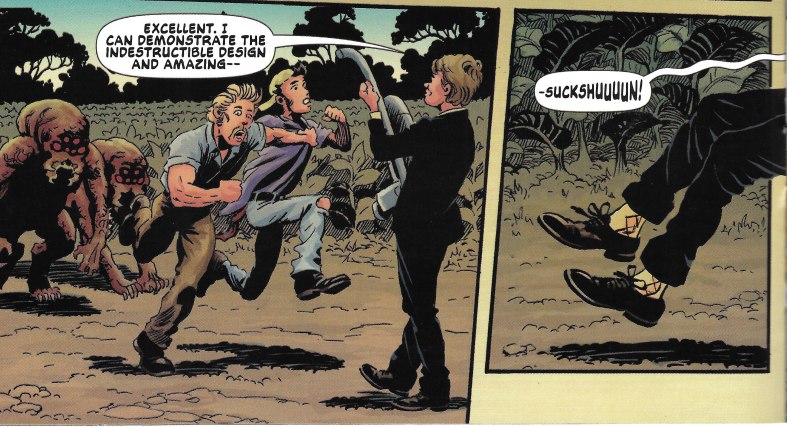 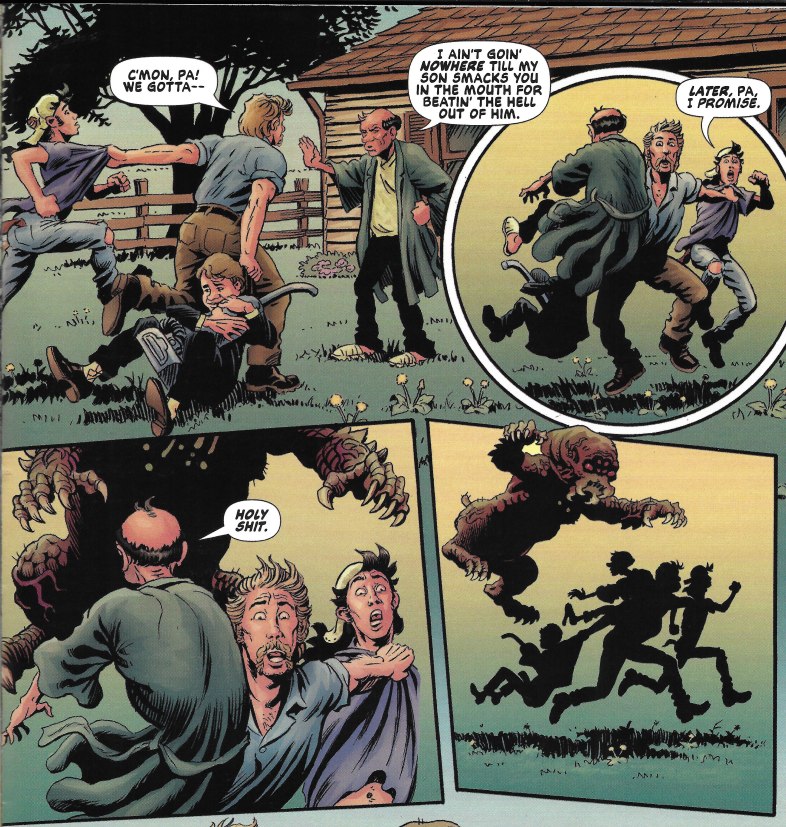 Here we have Johnny Ray carrying three people in a full on run-away-from-crazy-alien-monsters trot and I suspend disbelief FULLY. It is so well executed in a Looney Tunes-type vibe that I WANT to believe in this so I can see what other silly, amazingly clever things Farmer, Niles, Jane and Marquez will throw at us.

And yes, they have more great stuff. 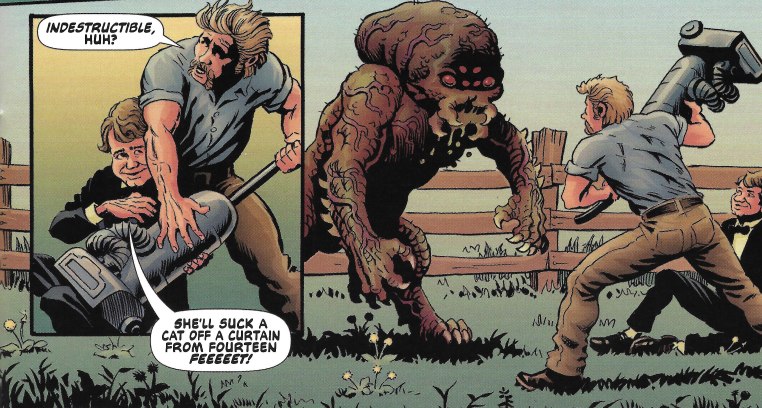 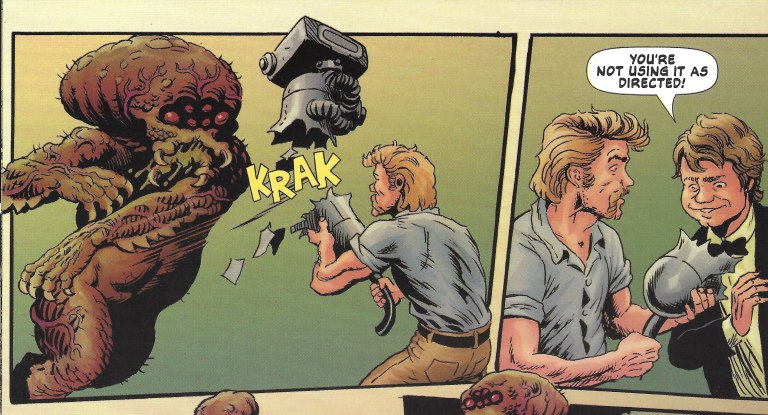 Yes, I laughed out loud at that one.

These critters don't give up and neither do our four-some of heroes. Johnny Ray takes one down by lassoing it with a wench… 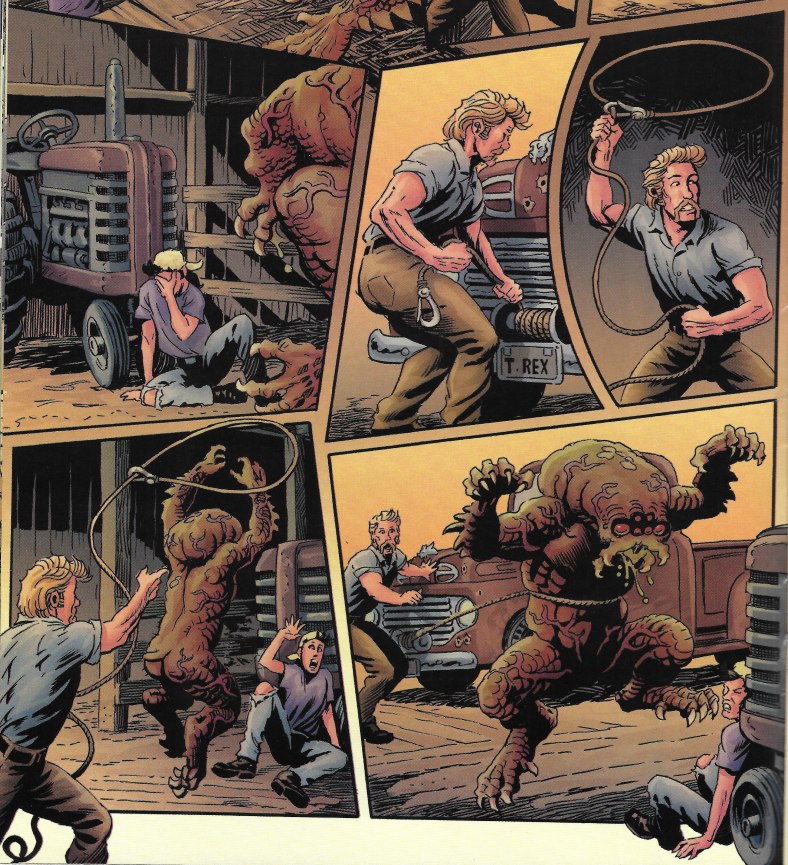 And then turning it on… 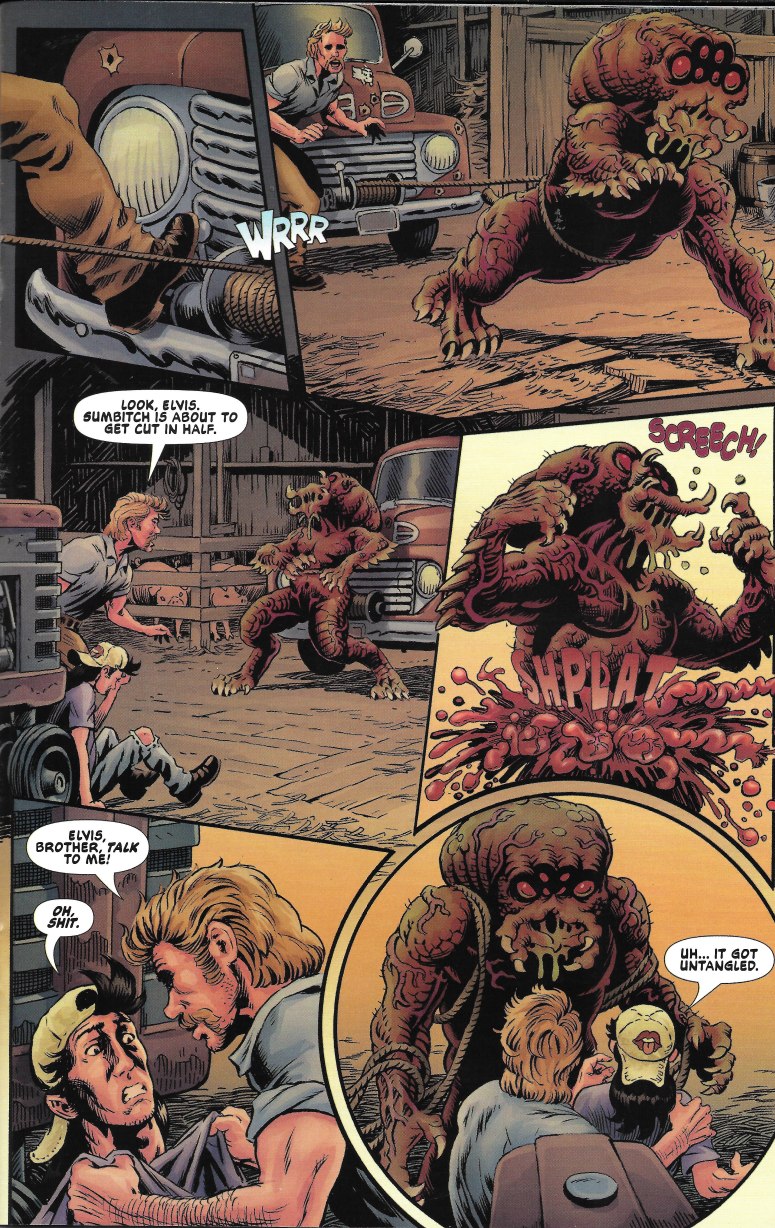 …handily slicing that mother in half. There are not words enough to express how much fun I'm having with Marquez's illustrations through this. Dynamite stuff. And speaking of explosive beginnings… 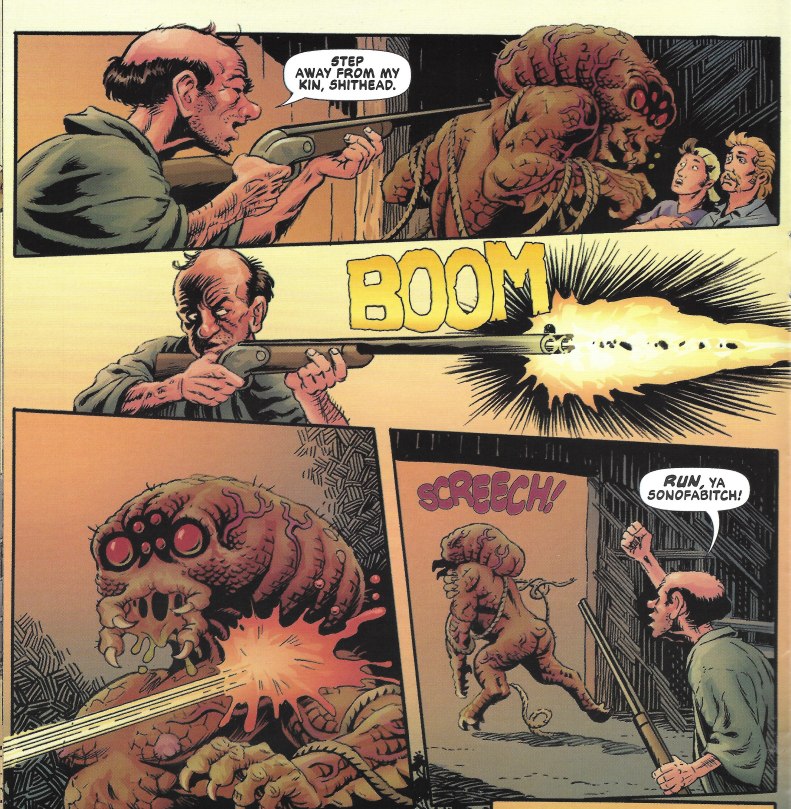 Papa Dad is around to wound and scare off the other one, which probably wasn't the best of ideas. 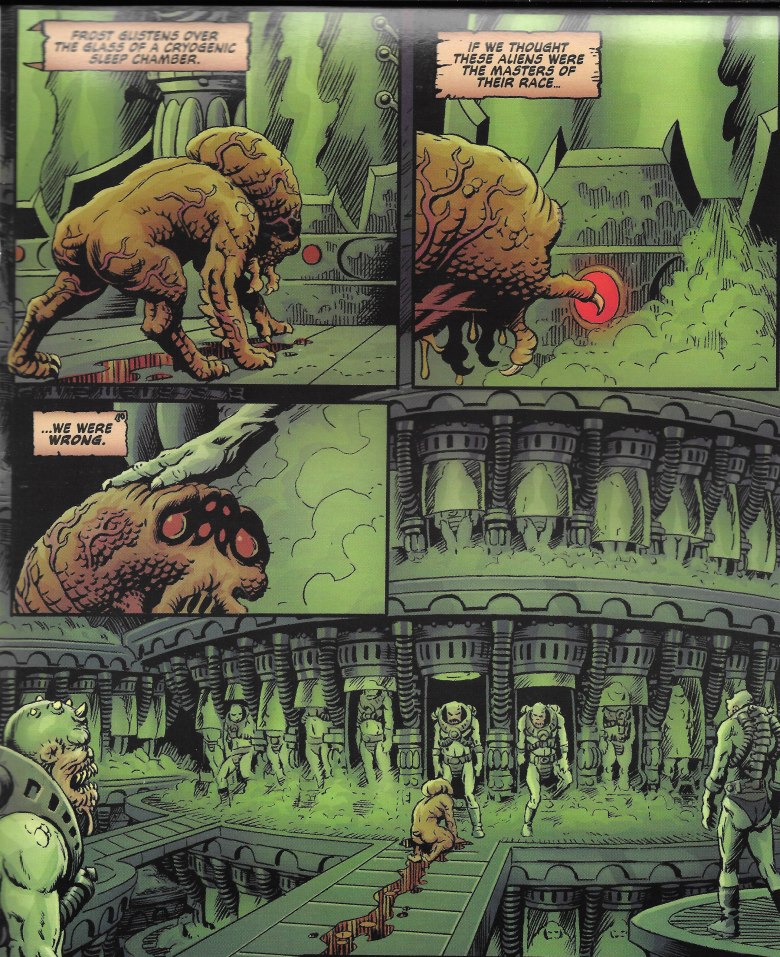 Seeing as to how it heads back and unfreezes the TRUE alien threat. A threat that promptly heads off to a different neighbor's pig farm for a lite snack. 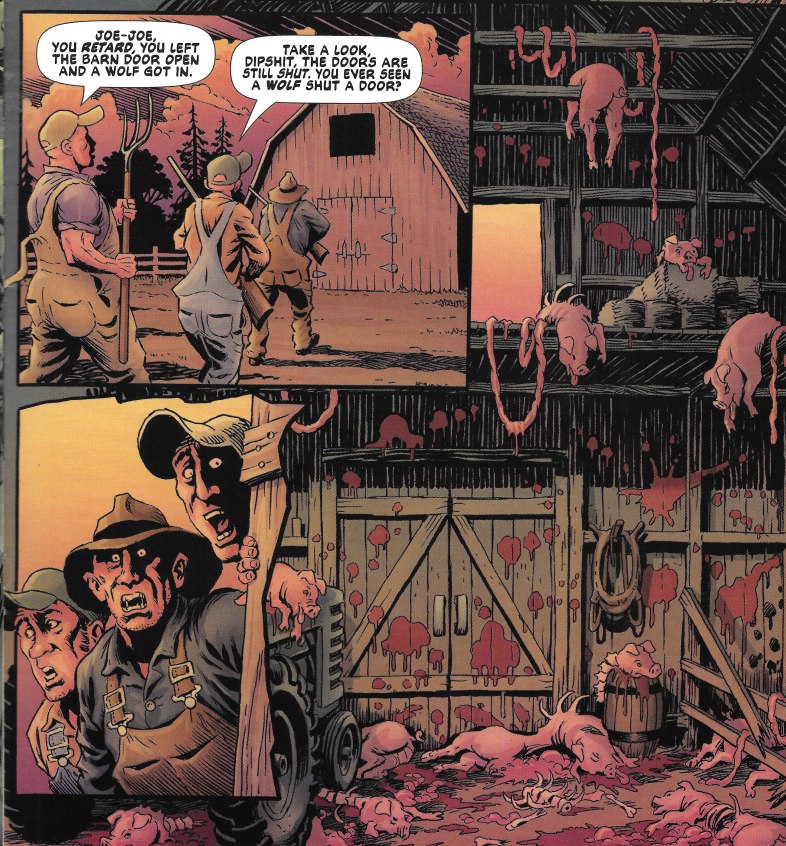 Ew…that can't be kosher. Or can it? Either way, in picking up the pieces (literally and figuratively), these guys end up adding to the mess with their own dead bodies. Doesn't look like our good-guys will make it as reinforcements in time. 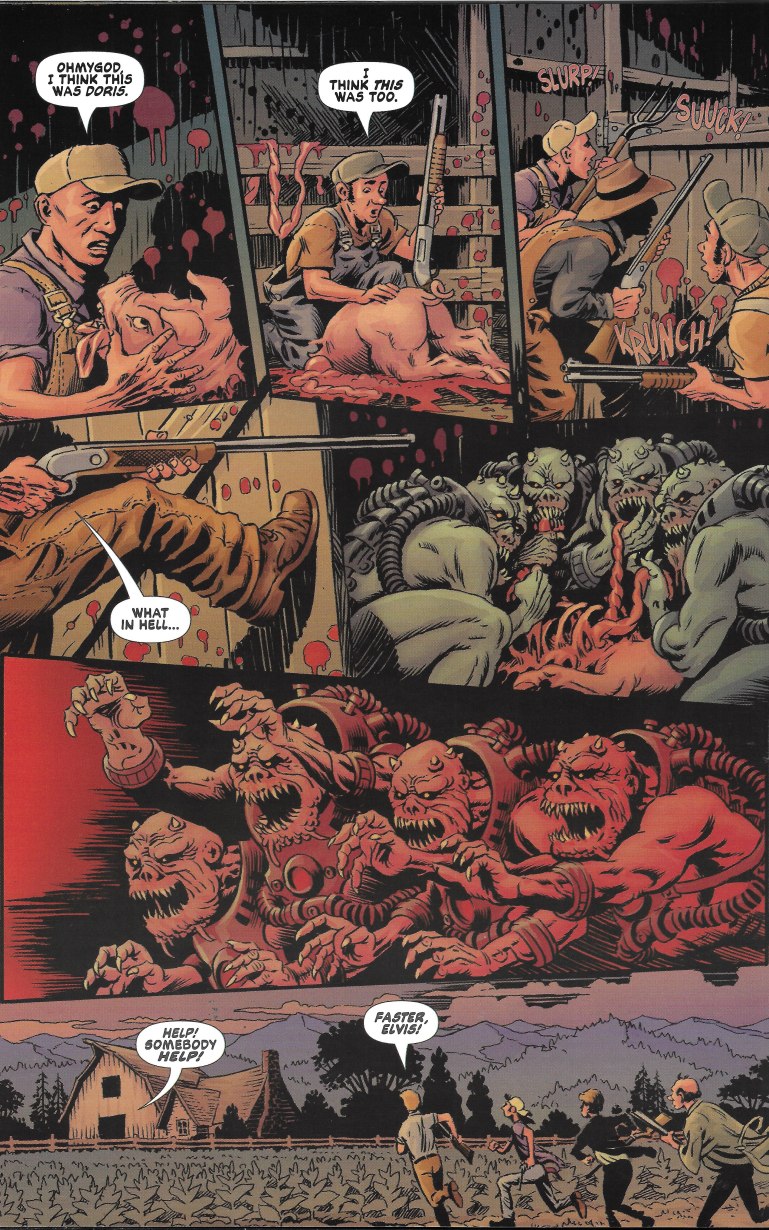 Meanwhile Cindy is fending off a "probing" of a different sort as Deputy Clyde stops hiding how much of a jerk he really is. 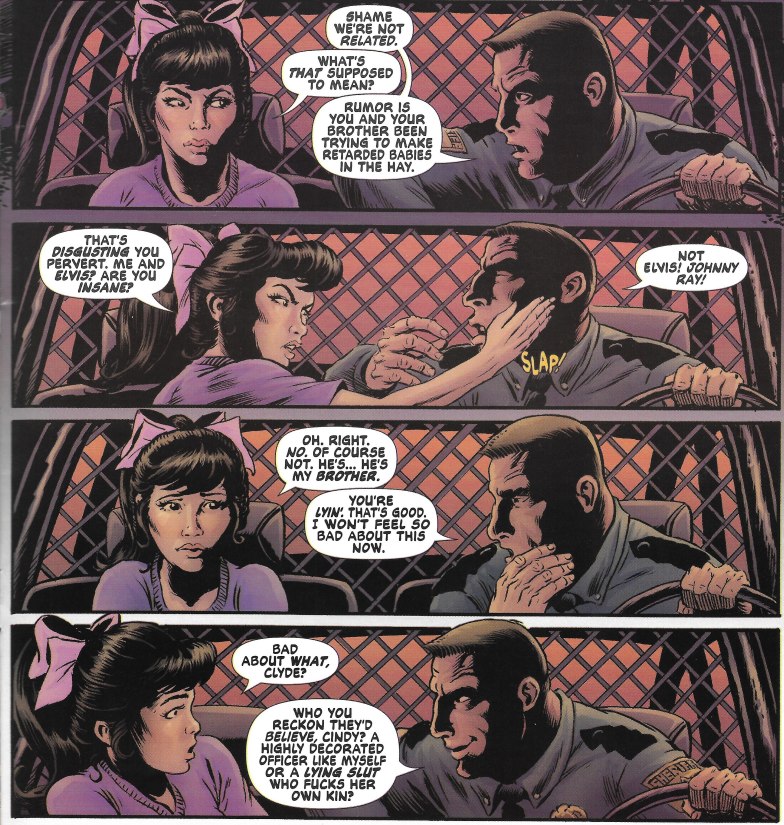 He follows this up by actual sexual assault. And things only get worse from there as something "rescues" her by ripping off the car door. 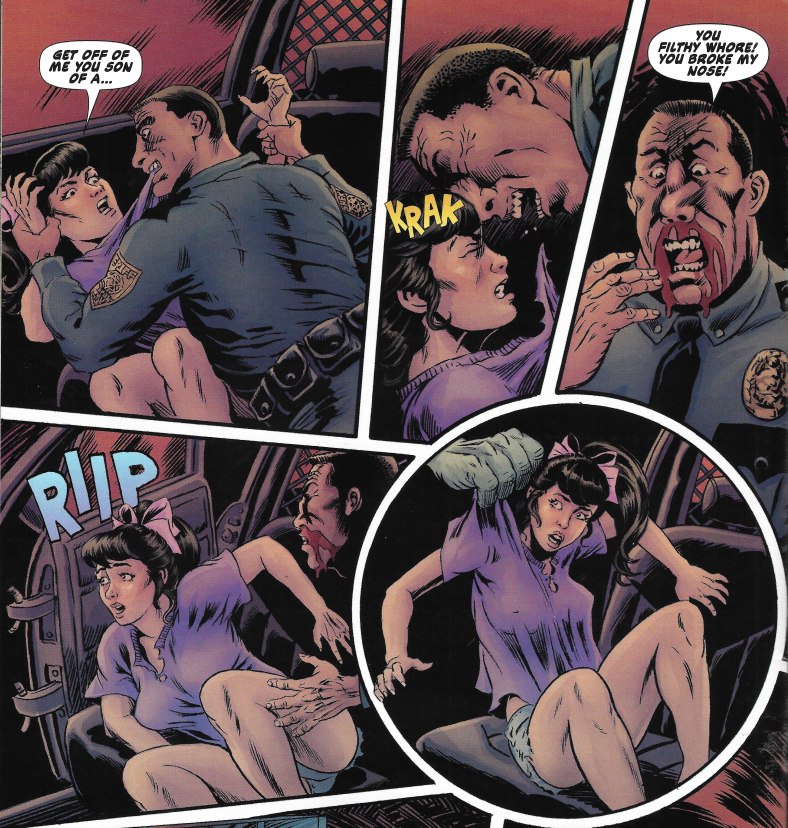 As deputy dipstick beats feet out of there, Cindy is passed to the biggest and ugliest greenskin there. And that lick doesn't look like he's hungry to eat her so much as "glad to meecha." 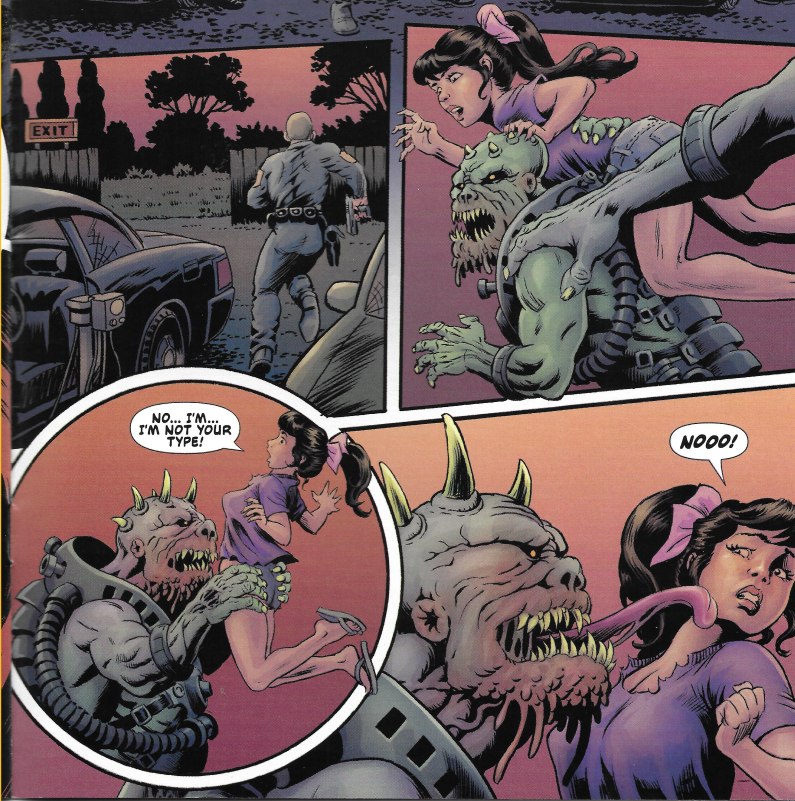 And this is our ending splash cliffhanger: Cindy in the arms of a huge hulking alien begging for Johnny Ray to come save her. 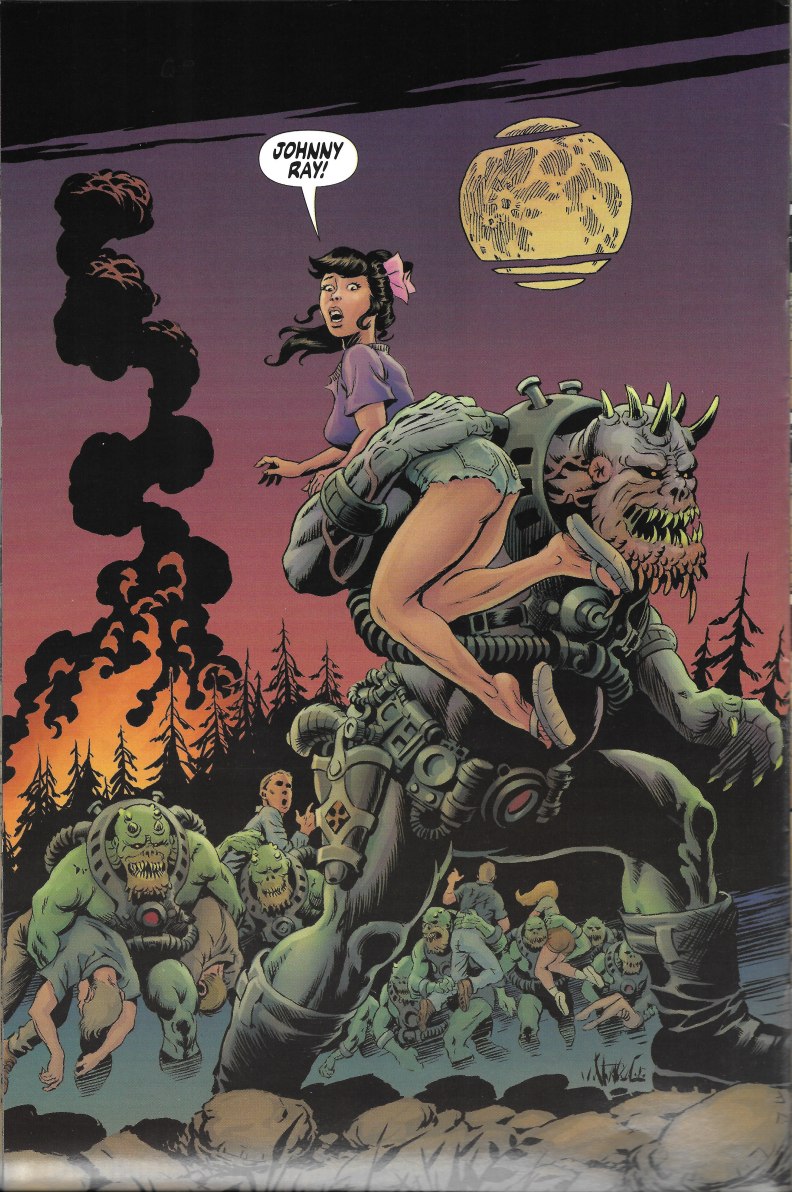 Alien Pig Farm 3000 was a limited series and the cutoff was issue four. I haven't seen a trade of them listed on Amazon, but e-bay has plenty of copies of the individual books for cheap-cheap. It is well worth your time and coin. I hear the last issue hints at a sequel. If it has these four multi-talented gentlemen behind the wheel, I'd gladly sign up for that road trip.

So I LOVED this! It is chock full of laugh-out-loud bits of humor, the art is just simply amazing and I enjoyed all of the characters. The book come from surprising sources but it delivers, so who am I to question what makes good comic book chemistry. Urge you to rush out and find these. They will put a smile on your face.
Posted by SonOfCthulhu at 2:27 AM