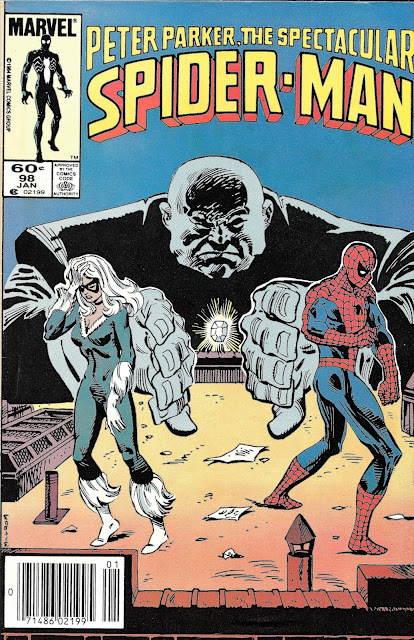 I felt the need to cover this issue due to many reasons.

For one, the book covers Spider-Man’s origin a bit in the most concise way possible. I’m hearing we won’t be seeing this in the Spider-Man Homecoming movie (take that Bat-saga!). Secondly, we get the origin of the Black Cat, one of Spidey’s many loves over the years. She hasn’t shown up on screen yet, but I figure with Ned Leeds being brought in that it is only a matter of time before we pull in the rest of Parker’s troop of pals. Lastly to cover the origin of one of Spider-Man’s stupider villains, who even get created in a stupid way. I give you the origin of The Spot!

But before we get to that we have to talk about the art and story in this. I am not a fan of Al Milgrom, yet I’ve bought much of his work. From his lackluster pencils, his heavy-handed inking style and his over expository writing skills, Al Milgrom is not a name I like to open a title page and see.

And while that may be harsh criticism, it comes with the understanding that Milgrom’s been in the industry long enough to have an astonishing body of work. He’s drawn or inked nearly every hero from both the DC and Marvel stables. There are so many works with his handprints on them that even I have to admit that occasionally I enjoy something he’s done only to notice his involvement after the fact. It is usually on inks, where sometimes his dark line art will mesh well with a penciler’s style (such as his work on Simonson’s X-Factor).

And here is a tale by Milgrom, the first that I’ve encountered. I’m stuck, because there are good and bad points to this issue. It covers a lot of ground, but at the expense of lots of expository dialogue and characters talking to themselves in an unnatural way. Plus it is Herb Trimpe art, which I am also not a big fan of.

To the good is the introduction of a silly villain for next issue which is always a treat. Let’s jump in, shall we? 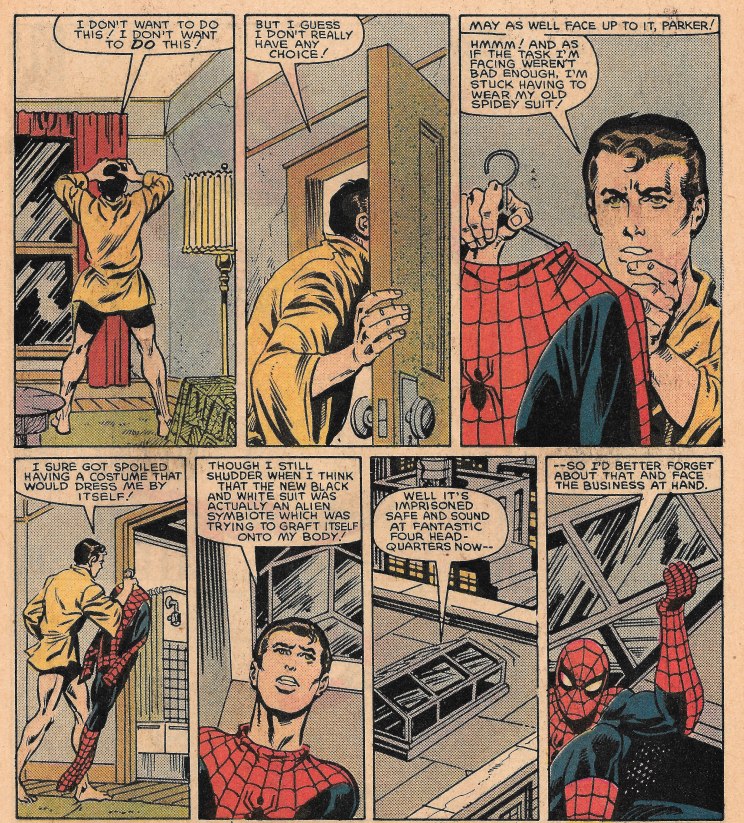 We begin with the overly talkative Spider-Man who feels compelled to break any drama over this “thing he has to do but doesn’t really want to” by recounting how he misses not having to change into costume, doesn’t miss the hassles of his symbiotic black suit however, and where the suit is currently being held. All this feels very in-organic and forced. Milgrom is force-feeding us a synopsis of prior Spider-Man issues.

And it wouldn't be so bad if it ended with that page and we just had him web-swing his way over to his objective, which is the Black Cat’s apartment. 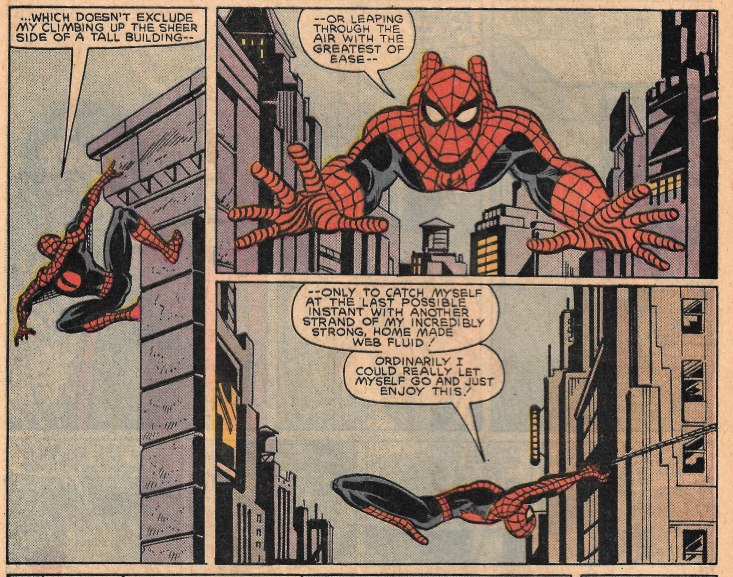 However, Milgrom feels the need to clutter up every panel with dialogue about how Spider-Man feels all angsty about even swinging around town now or describing every bit of action in panel. Trust your artists, Al. They can do the visual part for you, you know? 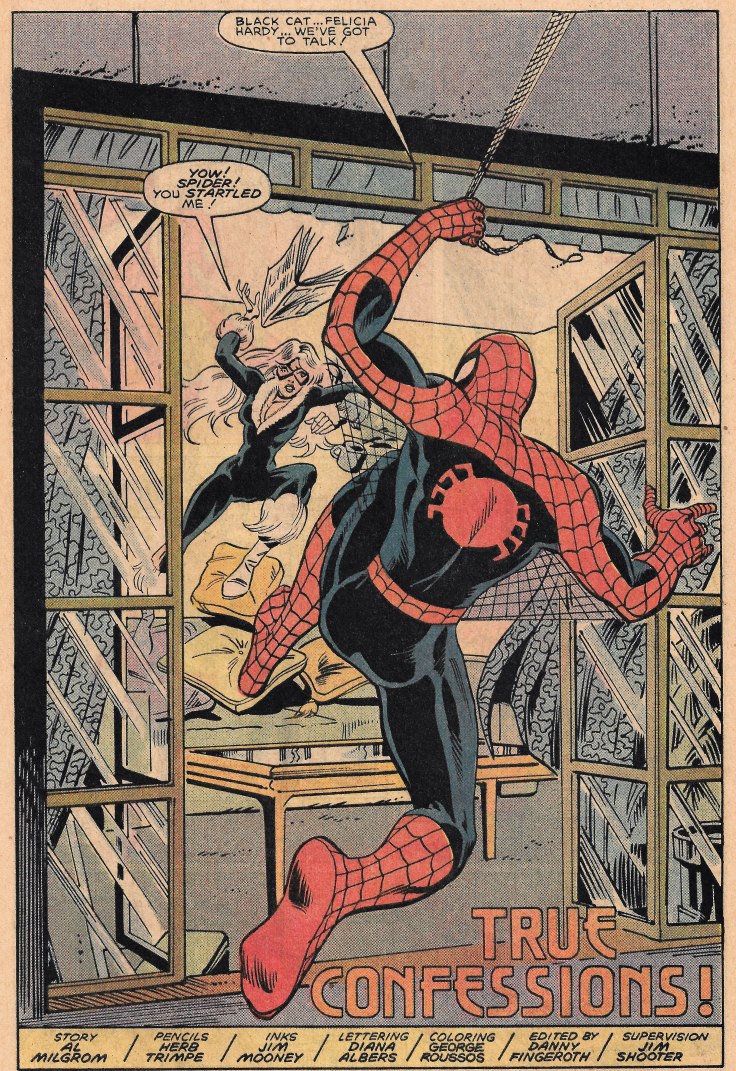 See! This panel says it all. You don’t need the Black Cat saying “You startled me!” It’s kind of evident.

I’m going to put aside any more comments about the dialogue from here on out and just concentrate on the story. Spider-Man has come to breakup with Felicia Hardy, a/k/a The Black Cat. She knows this but chooses to deflect his discussion by taking him for a nighttime patrol, perhaps in hopes of changing his mind. 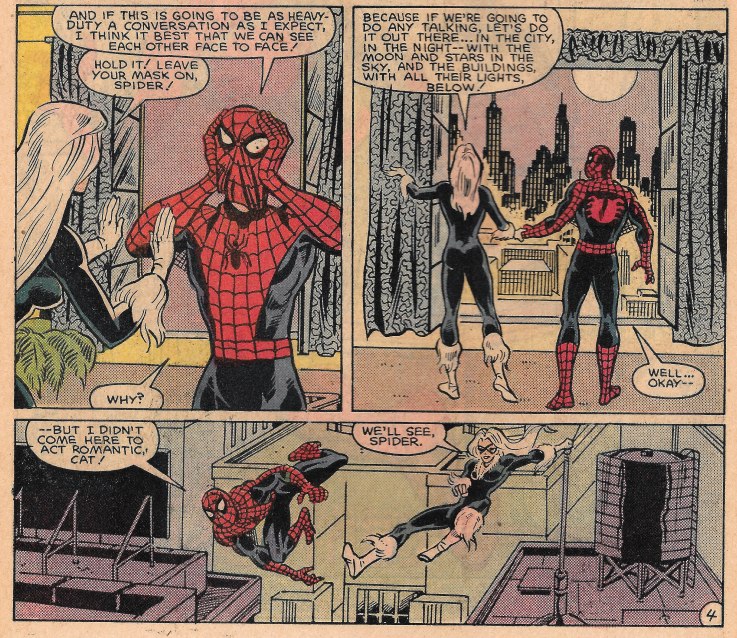 From here we skip on over to Kingpin, who has just had his towering headquarters attacked by…well, I’m going let Milgrom fill you in here on the last few issues… 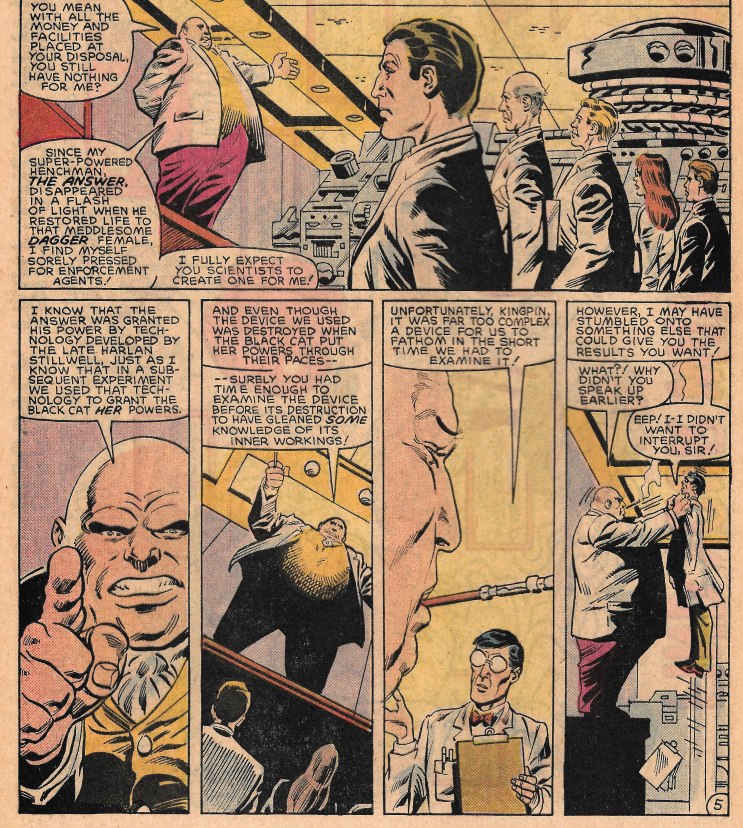 In doing this Milgrom destroys the character of Kingpin. Gone is his aloof nature as he is reduced to a mouthpiece, vomiting out the past in a series of "I know this..." statements meant only to fill in the audience and not to establish the nature or bearing of him as a villain. You have only to look at how different Kingpin is here than he is in a Miller penned issue of Daredevil to understand how underutilized he is. Neutered. That scientist (Doctor Ohnn) has the same problem as well, just info dumping to move  the audience where this story will go next. 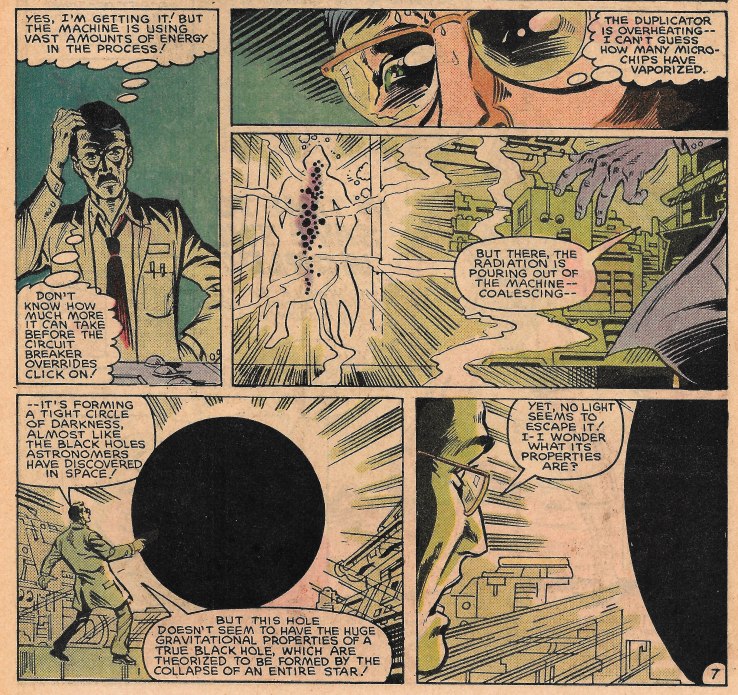 While Kingpin leaves him to his work, we spend a page of him leading us through creating a link to Cloak’s darkforce dimension. A link that occurs like a big floating black blob. 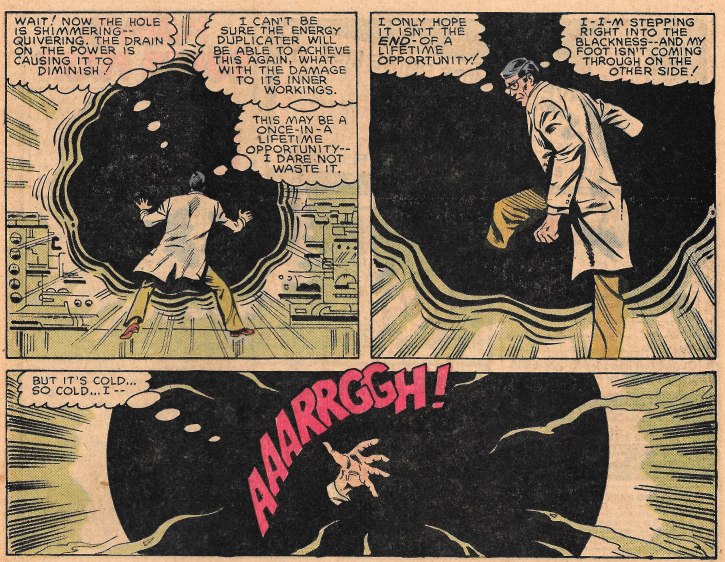 However it is completely unstable and before it disappears forever, Doctor Johnathon Ohnn decides to step into it. What a dummy!
Creating the blob does blow a transformer that leads to a blackout, which allows the black suit, currently broken out of Reed’s lab, a chance to move more freely about the city in his search for Parker. 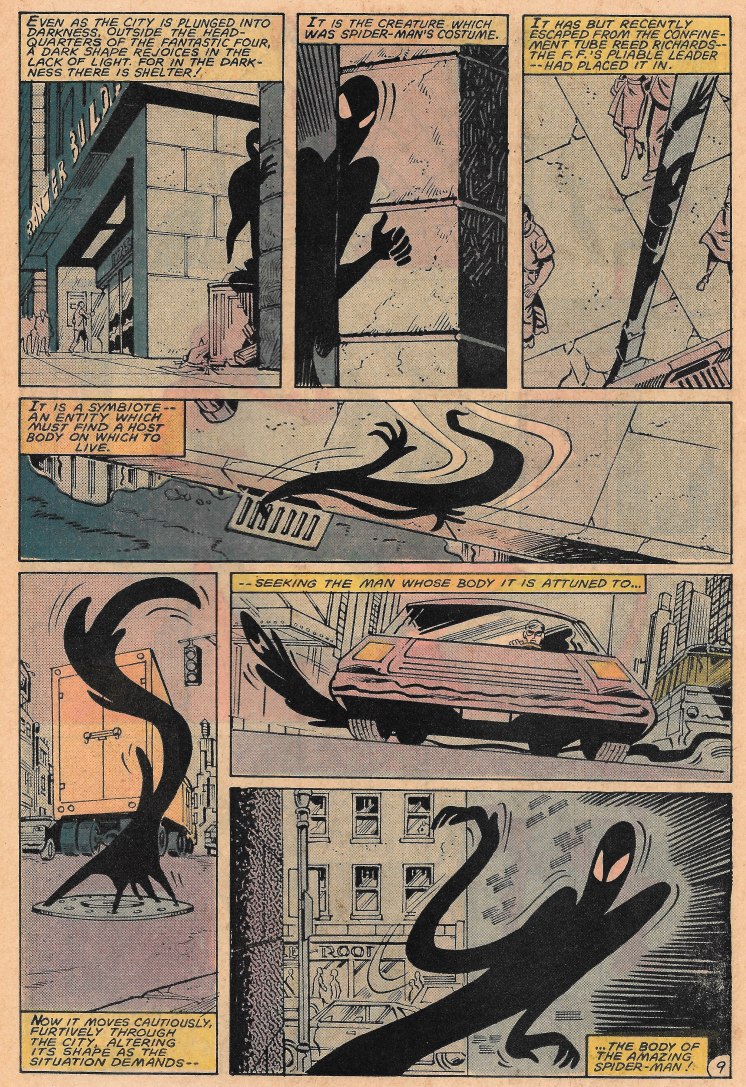 Blackouts lead to looting, something Spider-Man and the Black Cat can help with. Felicia only wants to cuddle, but Spider-Man tells her no and swings off awkwardly to fight crime (ugh, what is he doing in that panel?). 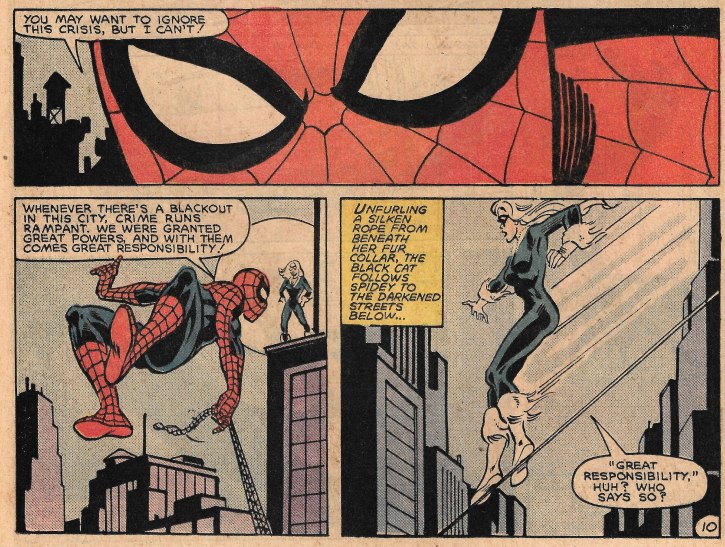 And they do bash some bad guys. Or whatever this is. How do you make a punch delivered at the angle of motion shown in that bottom panel have any kind of power? 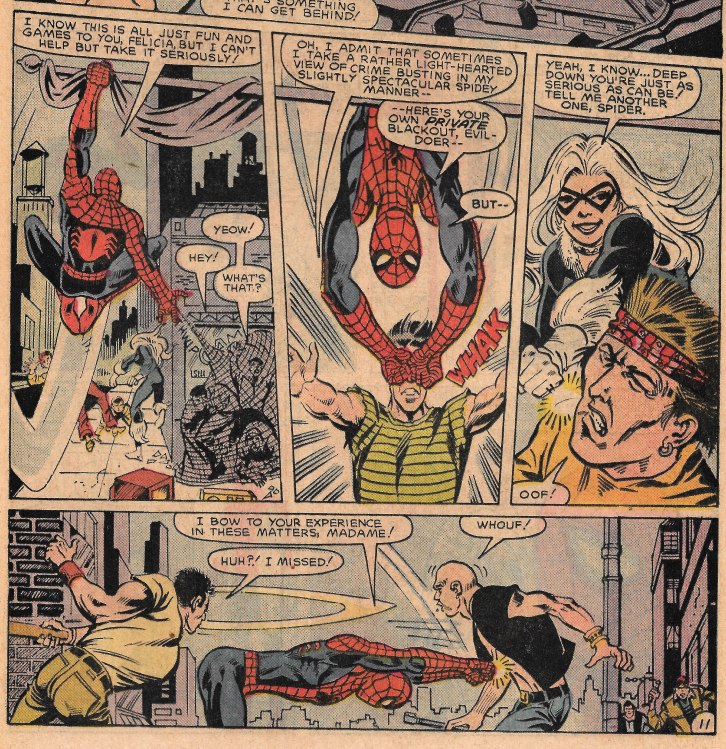 All this smacking folk around gets Spider-Man whimsical for the good old days, so he starts to reminisce about how he got his powers and learned the “great responsibility” lesson. It is so weird doing this in the MIDDLE of a fight though. 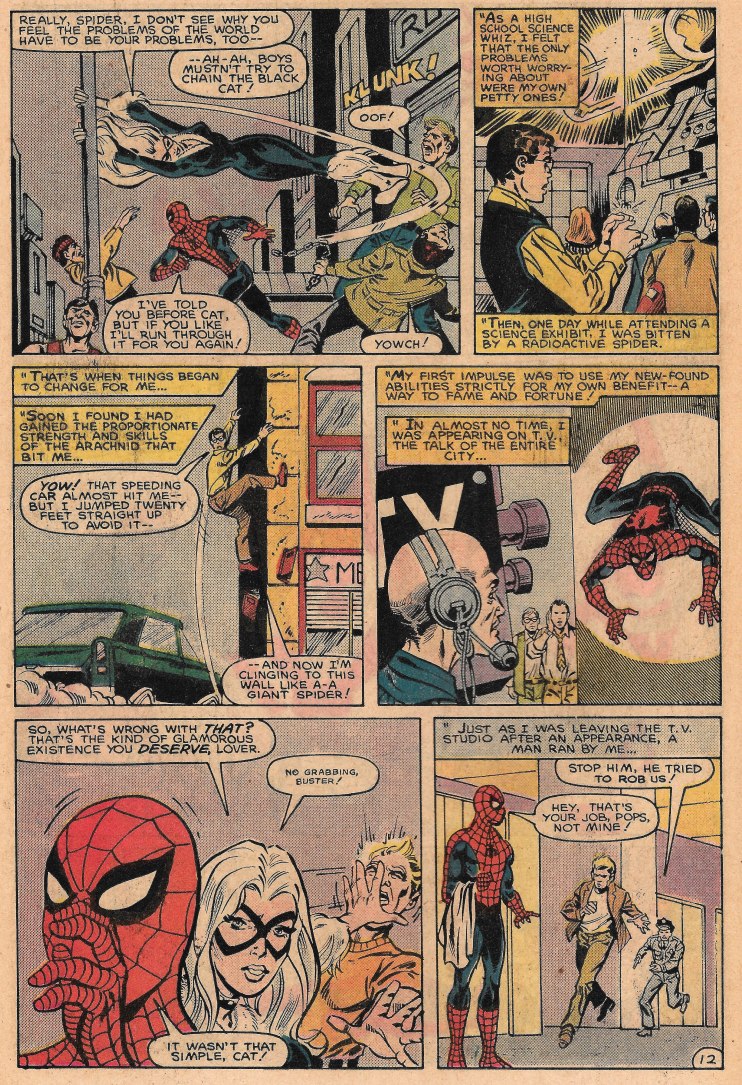 Well, okay. So maybe toward the tail end of a fight. Still… 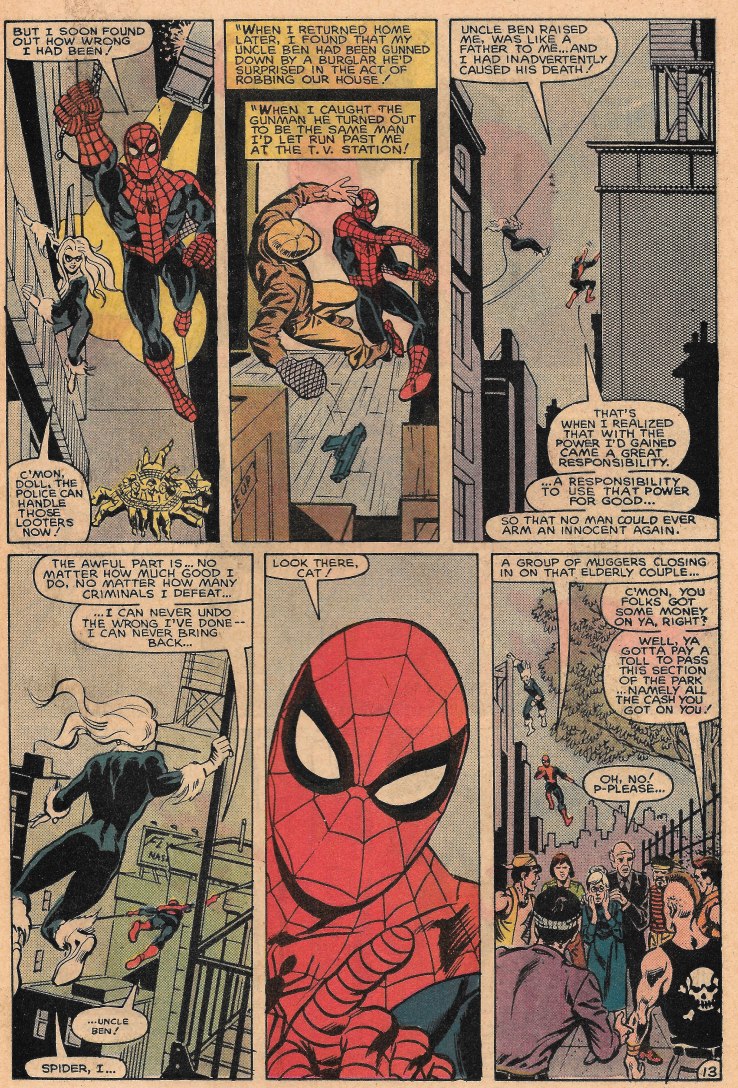 And I hate to admit it, but Black Cat has a point here. Spider-Man doing the hero gig out of a twisted sense of guilt is kind of a big call out for psychotherapy. He has some major unresolved issues that he needs to work on.

It is here we get a bit of the messed up side of Felicia Hardy and her background being the daughter of a world-famous cat burglar. 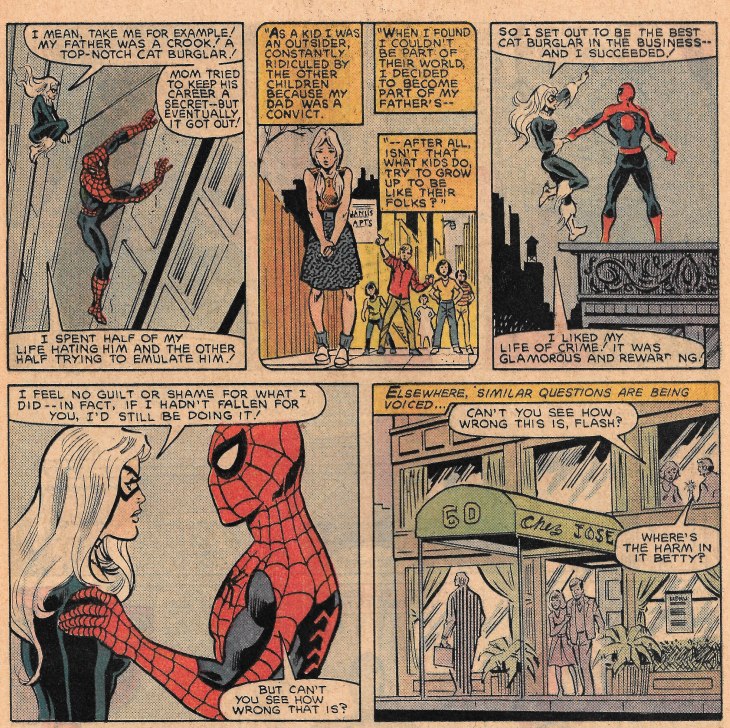 Then we stop for a quick interlude with Flash and Betty, who are both stepping out on their significant others…as good friends, is how Flash puts it and then we are right back to Spidey and Cat, trying to work out their differences. 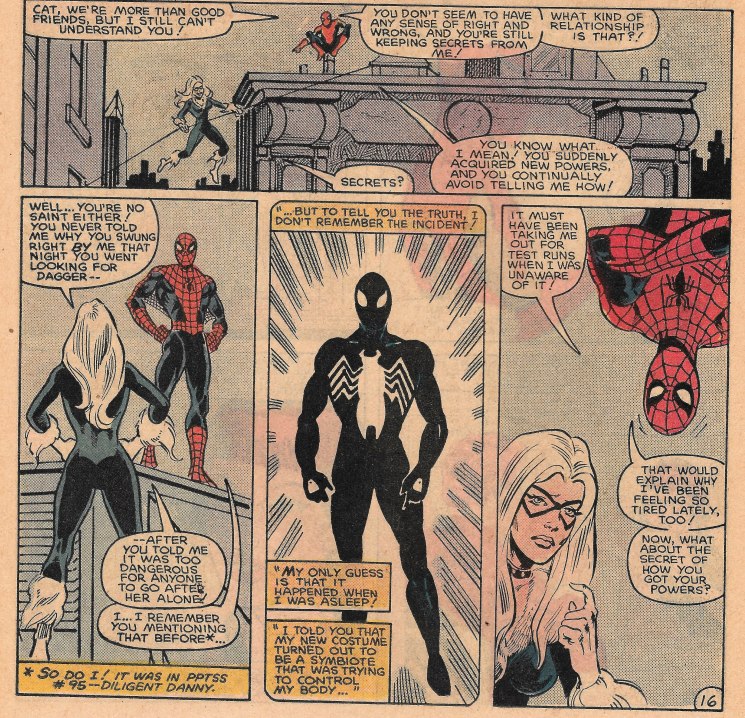 And this will be an answer Spidey doesn’t like…

But put that thought on hold as we spend a page with Doc Ohnn floating around in not-the-darkforce-dimension as he expected, but someplace…else. 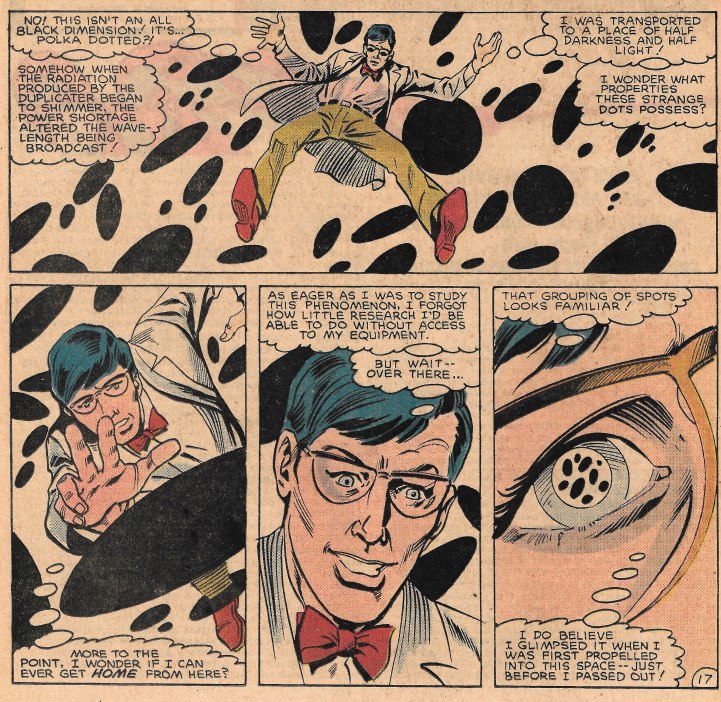 As Ohnn makes his way back to the grouping of blobs he thinks will lead back to our Earthly dimension, he emerges to a big, big surprise. Hey, Doc? What’s black and white all over? 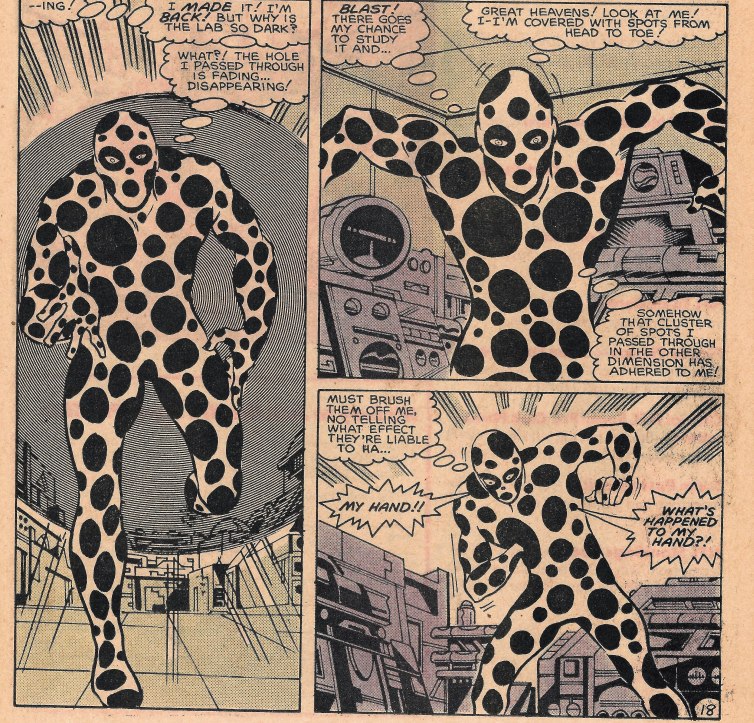 You! That’s what. Meet the menace for next issue, ladies and gentlemen. I give you “The Spot!” Sure to be the bane of inkers from this point forward.

I now return you to our Spider and Cat relationship discussion. Cat is just about to let herself out of the bag… 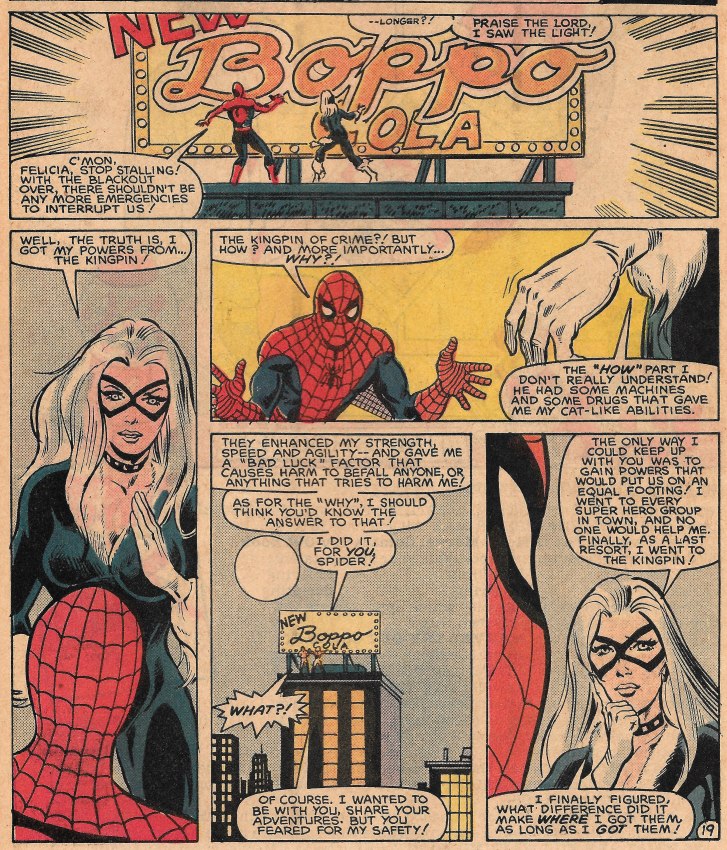 …causing Peter to freak out and think about shaking some sense into her. But before he can get all violent, Cat’s new powers cause the roof to give way and anything he touches to fall apart. 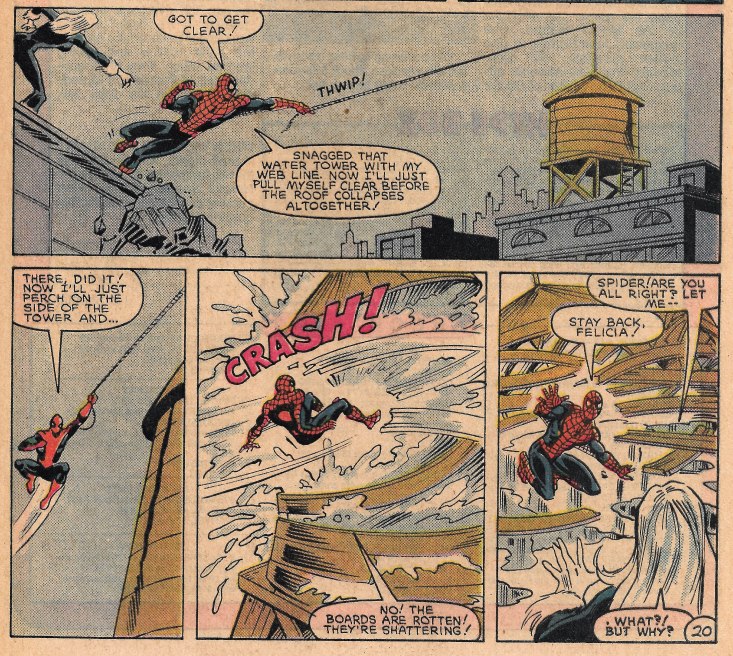 Spider-Man is upset at first, thinking Cat did that to him on purpose, but then learns Cat’s powers are activated unconsciously. She professes her love for him, but he appears to be concerned. 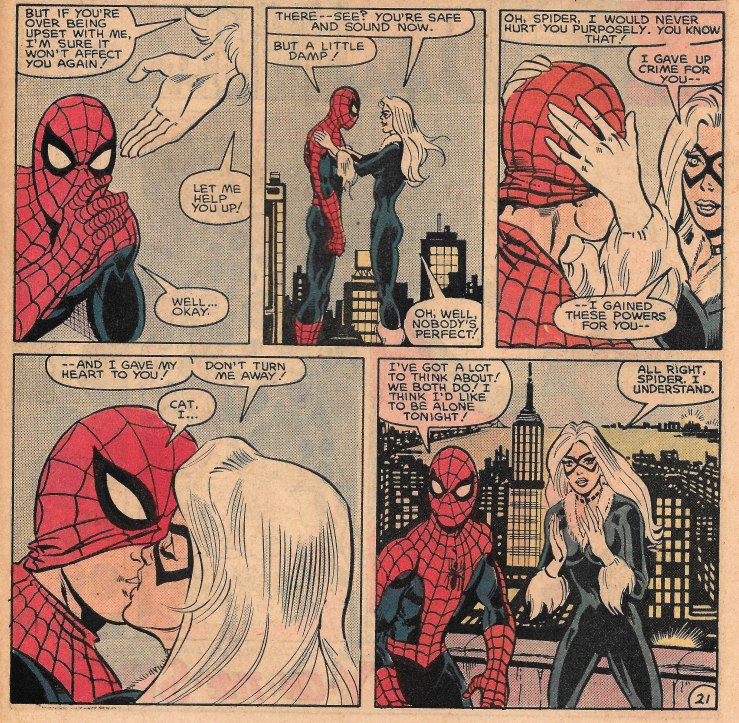 As they part for the night each thinking of the other, a new menace lurks just around the corner. 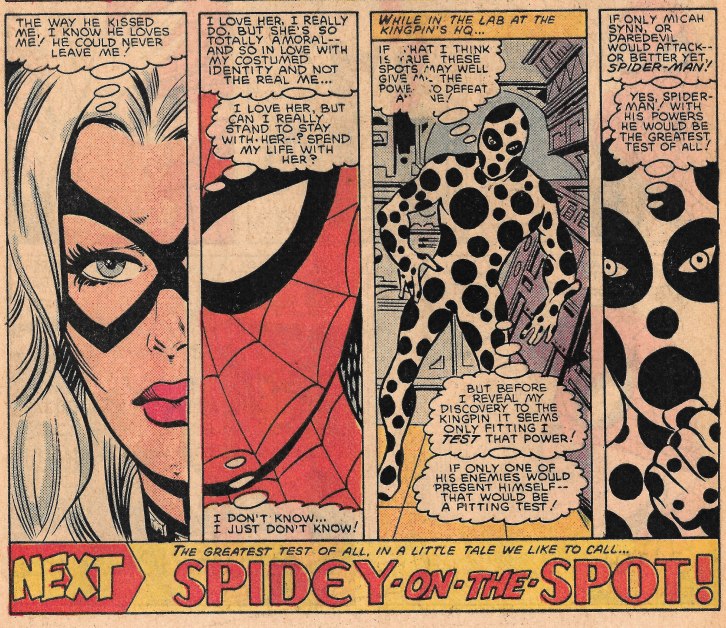 I’ve made my difficulties with this book very clear. It is serviceable art, if nothing special. And the storyline and plot isn’t really the problem, either. But Milgrom’s use of dialogue to explain and work as his mouthpiece for moving the plot along is too much. More than half of these word balloons should have been slashed to promote better characterization and to make the issue flow better.

If this is indicative of Milgrom’s run, I wouldn’t recommend it to any but a completest. It serves to fill the holes in the Spider-verse, but you will find yourself swimming in a sea of dialogue. In the comicbook medium, you should let your art do a majority of your telling the story.