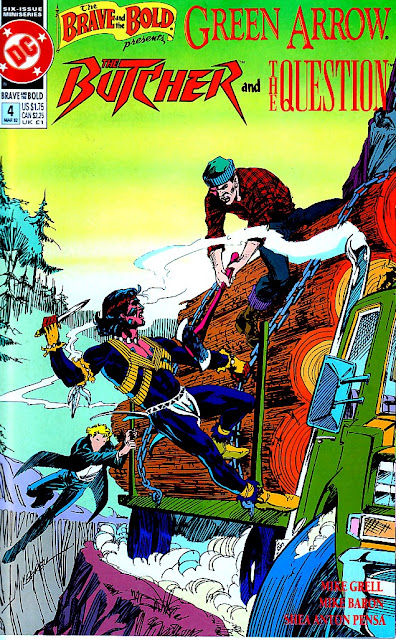 I never thought I’d see art this bad in a mainstream comic book.

The Brave & The Bold title for DC has created legends. Cave Carlson, the Silver Age Hawkman and Metamorpho all got their start in the magazine’s pages. Likewise the Silver Age Suicide Squad, Teen Titans and the mighty Justlce League of America all began in Brave & Bold. Beginning in 1955, volume 1 of the comic ran for 200 issues ending in July 1983. It started as a title about adventurers in past ages, was reinvented as a try-out title for new characters with issue 25 and finally with issue 50 became the team-up book we are all familiar with. Batman predominated much of the issues run and 200 lead into his Batman and the Outsiders title.

In 1991 a new six-issue miniseries Brave and Bold came out with the focus on a three way team up between DC’s venerable Green Arrow, the newly un-Charltonized The Question and a newbie American Indian hero known as the Butcher. Mike Grell and Mike Baron scripted the book, but a new artist by the name of Shea Anton Pensa got a chance to showcase his stuff between the covers. And his stuff is the most dreadful unattractive penciling I’ve ever seen in a DC or Marvel book. Don’t believe me that the art sucks so badly that I can say something like that? You soon will. 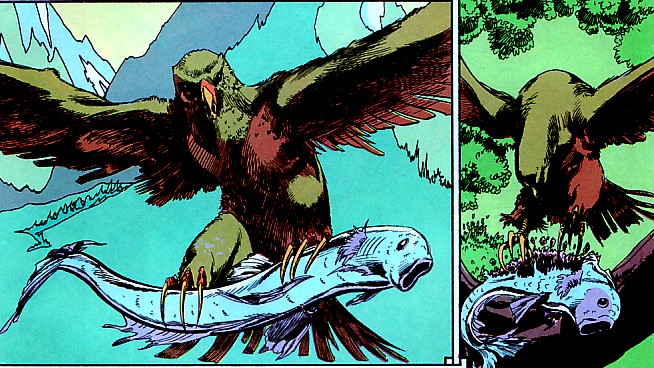 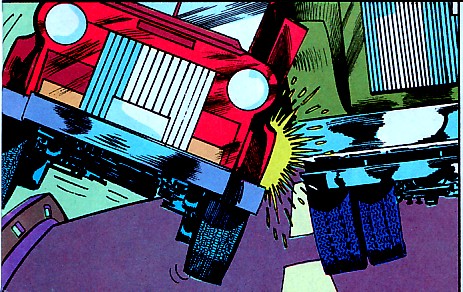 The red car in this picture has completely forgotten about gravity and has lept up and into the green semi. There’s no other explanation for this panel. The road is level. The semi isn’t coming over into the red car’s lane. The car has just suddenly decided to defy the laws of physics. It won’t be the first time we see that in this book. What’s sad is that what this is suppose to depict is the semi running the red car off the road, something so awe inspiring that it must be shown in a splash page. 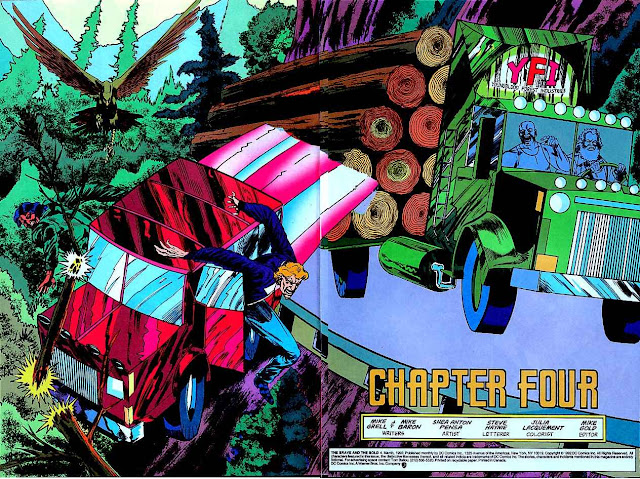 It’s like a Rabid Rachel flashback. Where to begin? That’s The Question leaping from the driver’s side. Or rather it’s what the Question would look like if he had four foot long arms connected to his shoulders by a ball in socket joint. By the look on his face, he appears to be in mid crap and very constipated to boot. The car he’s driving has suddenly taken on the ability to shoot magical rainbows from it’s trunk. Oddly enough, I think that car is a Scion xB which weren’t produced until 2004. No other car has that boxy square look about them. Another oddity is how the semi is able to drive at all since its wheels don’t appear to be attached in any way to the cab or the trailer. What do you expect from a truck driven by Santa Claus and his friend evil Mr Clean. Yes folks, we are in for one heck of an acid trip on this one. 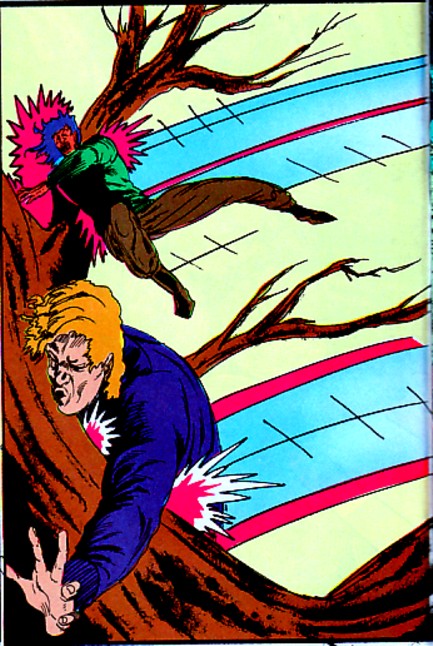 The dude with The Question is The Butcher, DC’s newest Native American superhero. Something about his name seems very un-“PC” to me. Perhaps they should have called him The Scalper. Sadly this is his last issue as he and Vic Sage/aka The Question are thrown against a tree trunk and killed instantly. 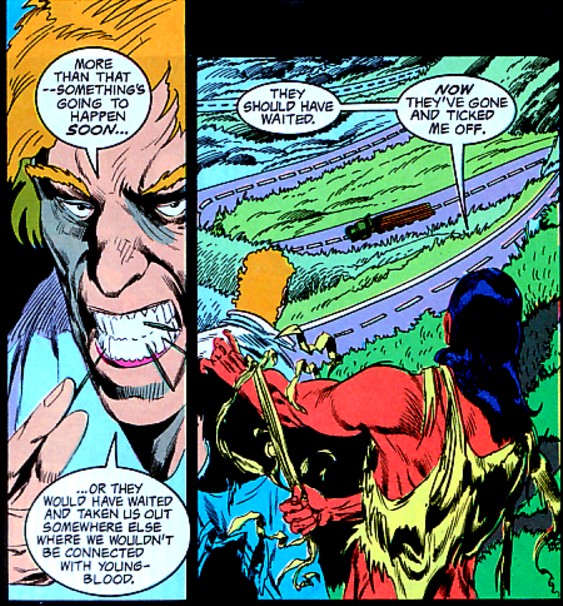 Actually they just wish they were dead so they wouldn’t have to suffer the indignity of having this artist draw them anymore. Unfortunately they survive. Survive so that Vic can be rendered like a demon with four toothpicks stuck in his teeth, the number of which would make a shark envious. 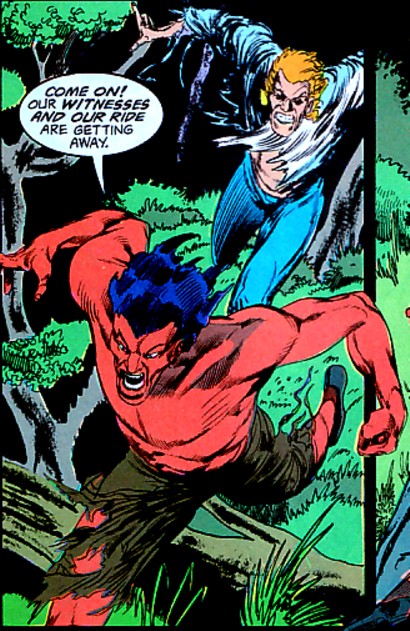 Why is the Butcher’s shirt all ripped now? He was wearing a jacket and a shirt just a minute ago and neither were torn in the fall. I guess his superpower causes clothes to burst into shreds while he’s wearing them. Did I mention the script is done by Mike Grell and Mike Baron? I did. That’s good, because the art is so completely distracting that it has bleed any desire I have to read the word balloons that accompany it. The gist of it is the two heroes decide to chase after Santa and Mr Clean’s semi.
I’m trying to bend my arm in half like the one on Bucher’s right side, but my elbow doesn’t fold in two places. Oh if only the two panels at the bottom of this page showed the extent of their chase. Instead we get to watch them bent out of shape like some 3 year-old’s action figures for two more pages. Some of the more heinous offenders are below. 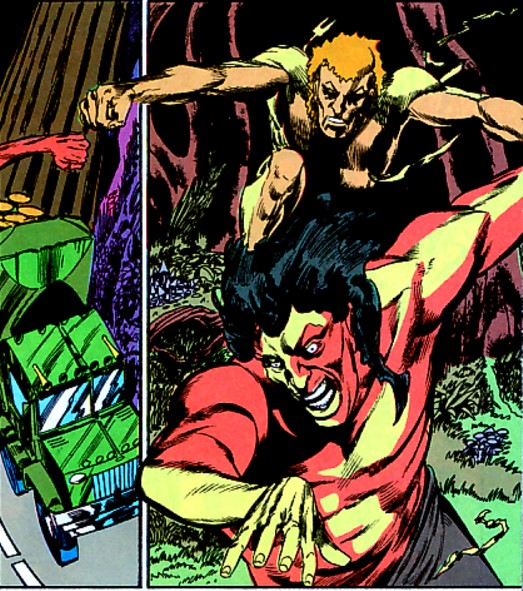 I wonder how Butcher runs with his face stapled to his shoulder like that. Looks like it’s causing him pain. Course I’d be running as fast as I could no matter how bad it hurt if I were him too, since it appears that Vic has stripped off all his clothes and is now chasing him.

That semi is currently negotiating turns that are physically impossible to make in a vehicle that large. This is how they even have a chance of catching it, because it’s going down a winding hill of unworkable roads while they cut through the middle. Their clothes must be impeding them though, because every time we see them they’ve taken off more.

When they do finally nab the bad guys, there will be no way for them to arrest them. The cops would have to haul the heroes away on indecent exposure charges. Luckily Butcher catches up to the truck before having to shed his trousers. Vic misses the boat, however. 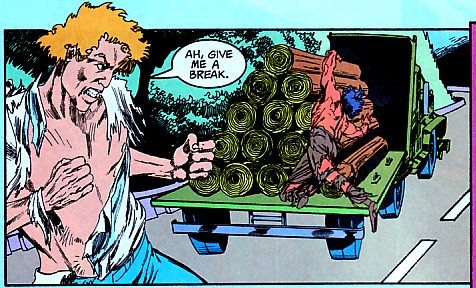 Give you a break? Why? I’m not getting a break from this horrendous art the penciler keeps inflicting on me. Nice to see you stopped to put your pants and half a shirt back on. Look out Butcher! Mr. Clean is getting on to the flatbed of the truck carrying an axe.

I had no idea that Mr. Clean had the ability to stretch his arms and legs like that. Reed Richards, Plastic Man, the Elongated Man and now Mr. Clean are all able to …what do you mean he can’t? What do you mean it’s a mistake on the part of the artist? Really! I had no idea that was the case. Also, Santa Claus needs to get back behind the steering wheel as it appears he’s gone missing.


In a wordless two page battle, Butcher gets the best of baldy and ends up pushing him off the truck. The battle made me want to shred the comic, it was done so appallingly. This final panel took the cake. Here we have our falling evildoer impaled on a tree limb. Except the limb is clearly too wide at the top to go straight through his shoulder as depicted. 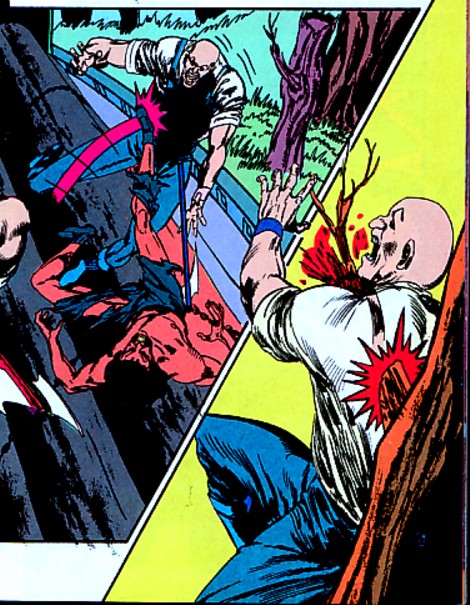 The sights of his cab mate stuck on a tree and of Vic Sage landing on his hood is just too much for Santa Driver. He loses control on one of the hairpin turns. Vic tries to help him correct, but is distracted because his hair has burst into flames. 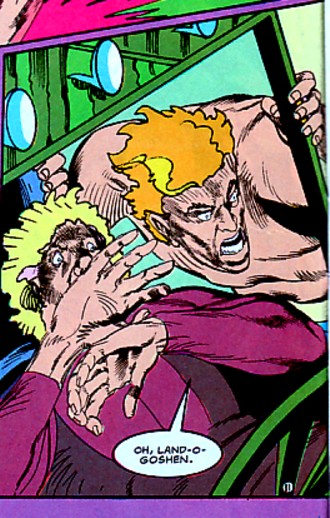 The truck crumples like tinfoil as all large semi’s are designed to do upon impact with a solid object. 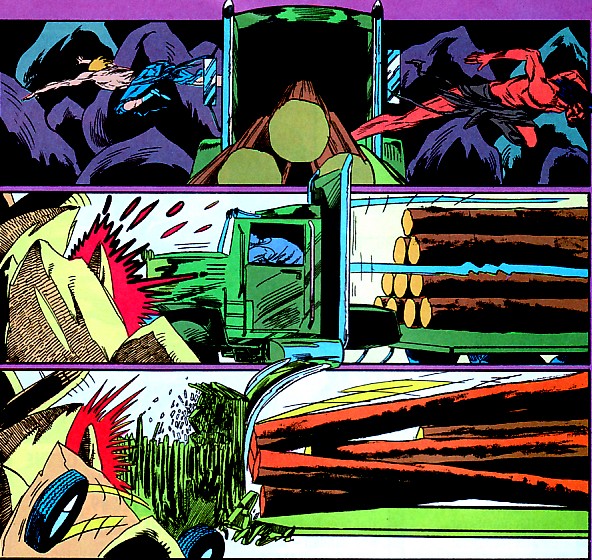 Suddenly naked again, Butcher and The Question ponder whether to clip their nose hairs or not. 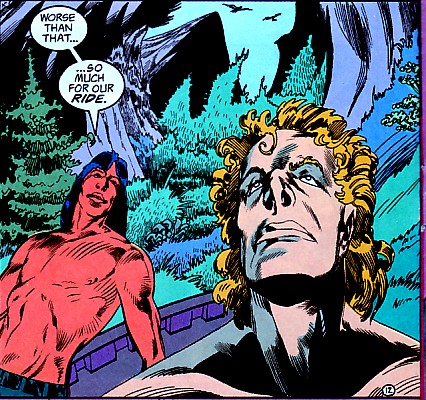 Meanwhile, Green Arrow in his Oliver Queen persona is scoping out the tourist festival at the nearby Indian reservation. Seems this whole “killer loggers” affair started with the death of a local developer who was setting up a land deal with the Indians. Queen is looking for a radical Mohawk and an IRA gunman who may be behind the killing. Neither of which explains what these Indians are doing.

Could they be dancing? Yes, but they might also be having elliptic attacks. Or desperately trying to escape from this poorly drawn comic. Or writhing in pain from the anguish of having to appear on this page. There are many layers to this panel. Like an onion. And like an onion, all those layers make me cry.
Oliver checks in with someone at his office. The someone is female with short dark hair. Given how most characters are being drawn in this magazine, this could be Black Canary. It could also be Lois Lane or Linda Park or one of a million other people. Only the artist and writer know for sure and they don’t let on by telling us her name. She points Oliver to the local florist shop that sent a wreath to the developers funeral. A wreath that was ordered the day before he died. Dun-dun-Dunnn! 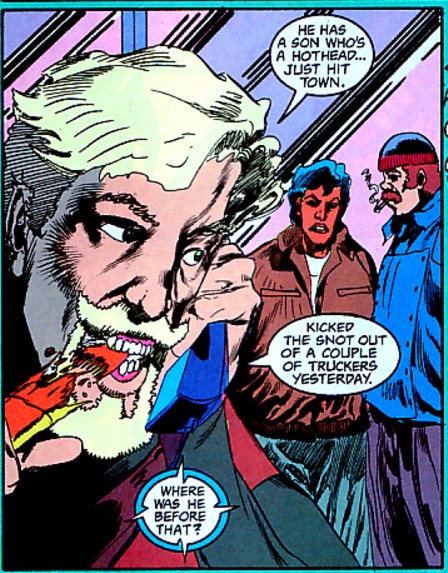 This is the ending scene of Oliver talking on the telephone. I really want to know what the heck it is he’s eating here. It looks like the body of a giant lobster but there is no way that you bite into something that has a shell on it like Oliver is doing here. So what is it? Also check out Mr. Queen’s fake plastic hair in the very next panel. Weird, huh? 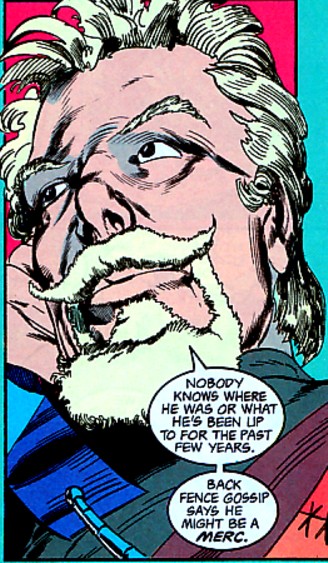 So Oliver follows the trail to Moonblossom Floral where he encounters this beautiful Indian maiden with a delicate tear tattoo by her eye. She is a fragile desert flower who’s gorgeousness is exceeded only by her exotic exterior. Queen is so stunned by her loveliness that his face goes flat at one point as he gathers the information on who sent the wreath. 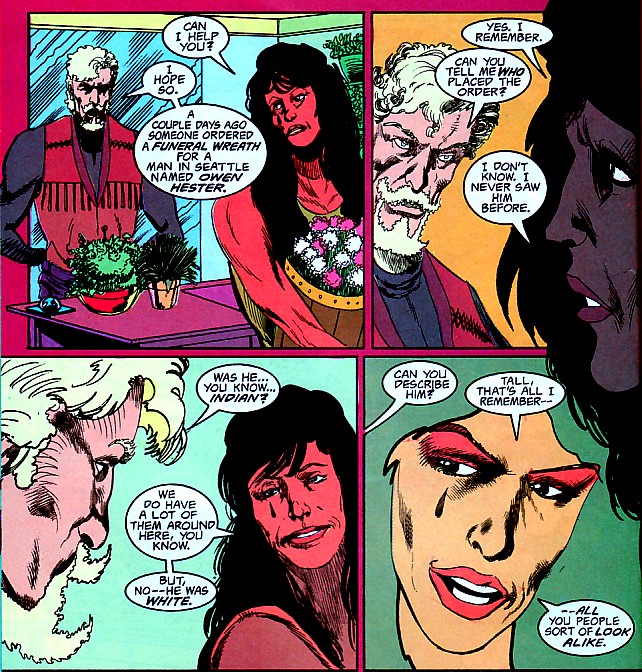 Help! Help! I’m slipping into sarcastic self parody! The art is taking away my will to comment on it. I just want to post panel after panel while remarking “It sucks” over and over again. I’m not even showing you the panel at the bottom where Queen's neck bends around almost backwards as he exits the shop. Suddenly the woman’s son arrives at the shop. I think he’s behind the Indians being stirred up or the murder or 9/11, but at this point I DON’T KNOW because the art is so frightening that I’m having a hard time reading the text bubbles.
I do notice the family resemblance between the two, however. 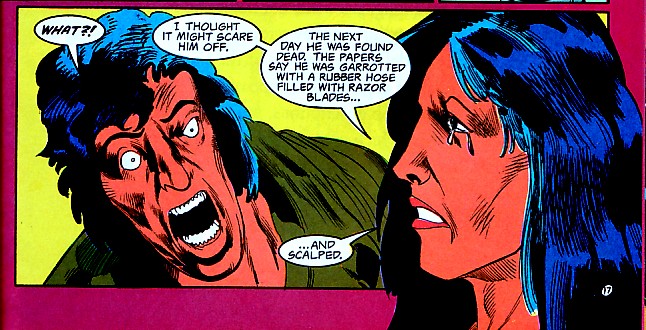 This is the son’s reaction to finding out his Mother sent the wreath as a warning to the developer, meaning the wreath had absolutely nothing whatsoever to do with his murder. Somehow this implicates the boy’s Father which causes his face to turn into a Christmas Nutcracker. 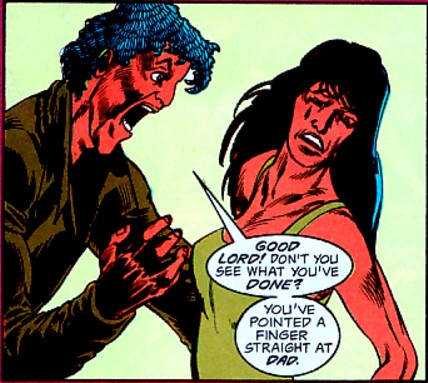 The son takes off upset and is next seen unloading automatic weapons in a bar as the Harvest Festival Dance takes place a few feet away. While doing this he talks about how the White Man is keeping him down or something. Meanwhile one of those “White Men” with a very red neck is harassing every Indian he comes into contact with at the Festival. 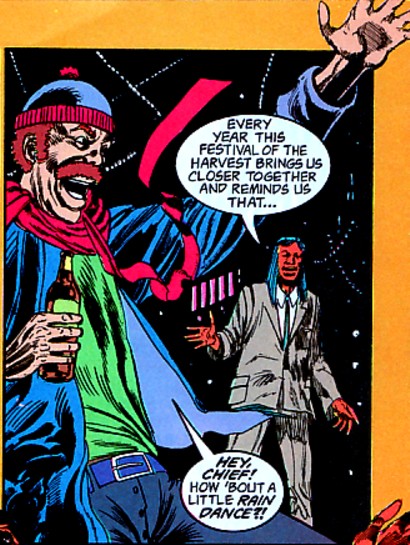 He crosses the line when he puts the squeeze on this squaw. 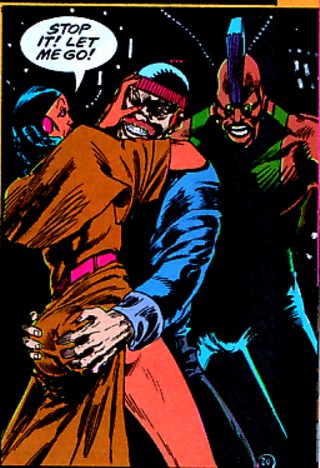 Groper guy starts a big huge ugly fight. And by ugly, I mean rendered poorly on the page. Florist’s son seizes the opportunity by firing one of his guns off in the air and then making a little speech. He riles everyone up into a frenzy against the white oppressors. They barricade the roads into the reservation with armed men and trucks. Our heroes are a bit confused by all of this.

What I don’t understand is what DC editorial was thinking when they released this book. Surely someone must have noticed how poor quality the art was. According to the source I have, the whole mini was drawn by Shea Pensa. One fan in the letters column even said “Shea Pensa delivers some of his best artwork.” If this was his best, pray we never see his worst.
Posted by SonOfCthulhu at 8:12 PM