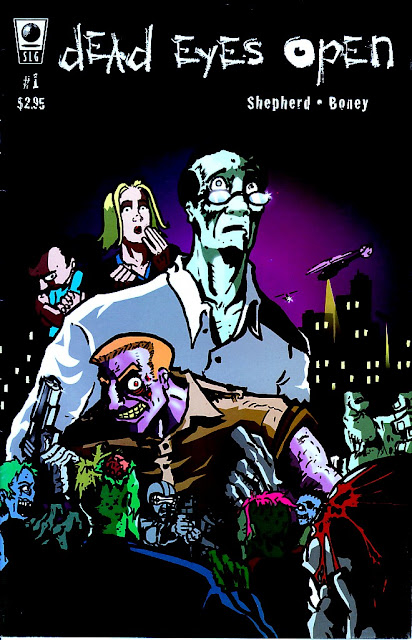 Produced by independent publisher Slave Labor Graphics, Dead Eyes Open is a thinking man’s zombie comic. It was a six issue mini series started in July 2005 and wrapped up one year later. The brainchild of writer Matthew Shepherd, DEO presents a world where someone could die in their sleep and wake up “not even knowing you were dead.” The book looks at a zombie plague and asks the hard questions about individual rights. Shepherd likens it to the “1960’s civil rights meeting today’s right-wing paranoia, except it is discrimination against the Undead.” An undead book with sociological overtones? Yeah, and it works really well. Better than Romero’s Land of the Dead, anyway.

The art is provided by Roy Boney, Jr. and in most instances wouldn’t score favorably with me. In this story and with this topic, Boney’s dark and heavily inked style is the perfect medium to convey the complex topics handled in this material. Superman or Spiderman it’s not, and we should be glad of it. 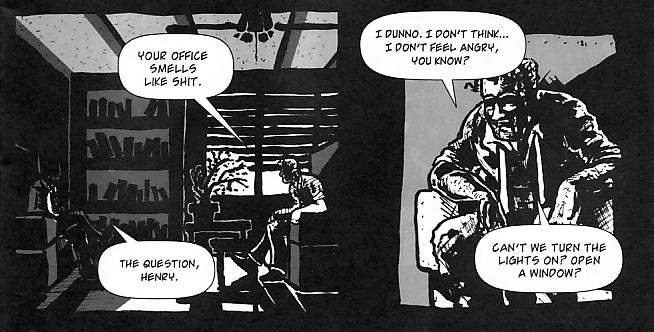 We begin our tale in the office of psychologist John Requin. Note the dark pencils originally drew me to this book when I saw it in the quarter bin thinking it would turn out amateurish. Give it a few panels to grow on you. Oh and shh! Dr. Requin is with a patient, Henry is his name I believe. 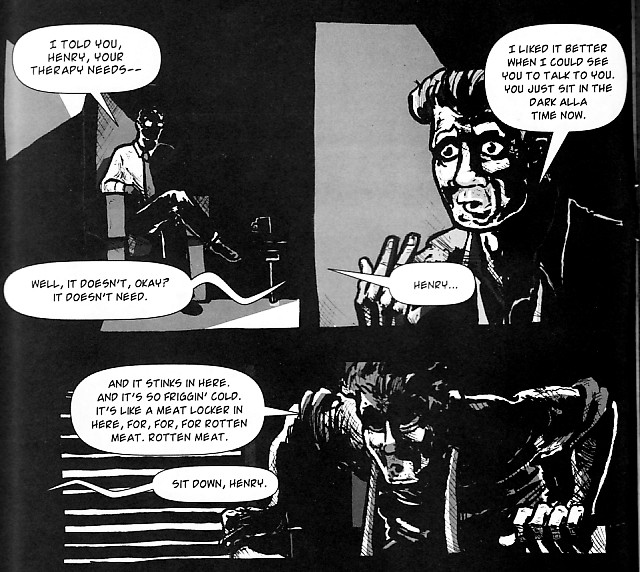 Dr. Requin is seeing Henry because Henry has lately been experiencing difficulties controlling his anger. Currently the doctor believes he’s made good progress at arriving at a channel for Henry’s violent behavior. Unfortunately his recent addition of having sessions in a freezingly cold, dark room aren’t going over so well with his patient. It’s also unfortunate that Henry’s seen through Dr. Requin’s ruse. It appears the good doctor has something to hide. Henry decides to seek therapy elsewhere. Dealing with Henry appears to have unsettled our physician. I wonder why? 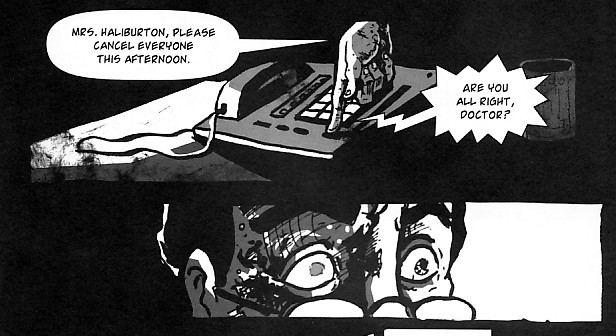 No, he’s not alright Mrs. Haliburton. In fact Dr. Requin is quite dead. With such a simple beginning we enter into a zombie tale unlike any previous. John Requin is dead yet still walking around among the living, and as we’ll find over the next few pages that presents a whole slew of problems. First up as he starts his drive home is a call from his wife. 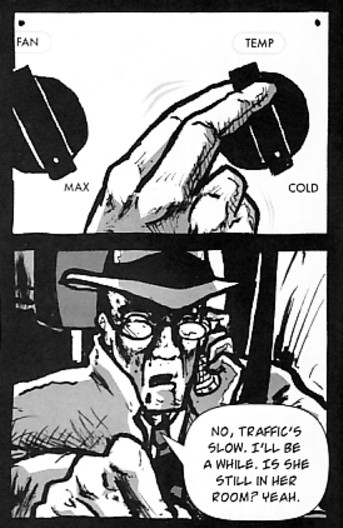 It appears his daughter is having some trouble. She’s going through some tough emotional times. Couldn’t have anything to do with the fact that Daddy is a reject from a George Romero flick, could it? Naw.

It’s right about this point that DEO grabbed me by my balls and pulled. I’ll tell you why in a minute.

I’m a Father of a ten year-old and a twenty-three year-old. The most heart wrenching thing you can imagine as a parent is to be shunned by your child. Additionally the thought of becoming a burden to the ones you love because of forces beyond your control, make this series very cerebral. Shepherd isn’t just talking about zombies here. He’s making a clear statement about the real life terror of aging and all that goes along with it: infirmity, disease, decreased mental faculties, and changed familial relations. Heavy metaphorical stuff for a simple zombie comic. And yet it’s done so effortlessly. Watch this next series of panels and see if the hairs on the back of your neck don’t stick up just a bit.

Physician, heal thyself. John’s in a bit of denial about how serious his “condition” is. Note that they next try to discuss if he should see a doctor. His wife is pro on the idea, but John quickly tables it as “having been discussed.” About this time his daughter pokes her head into the kitchen. Guess she’s worried he’s snacking on Mom. 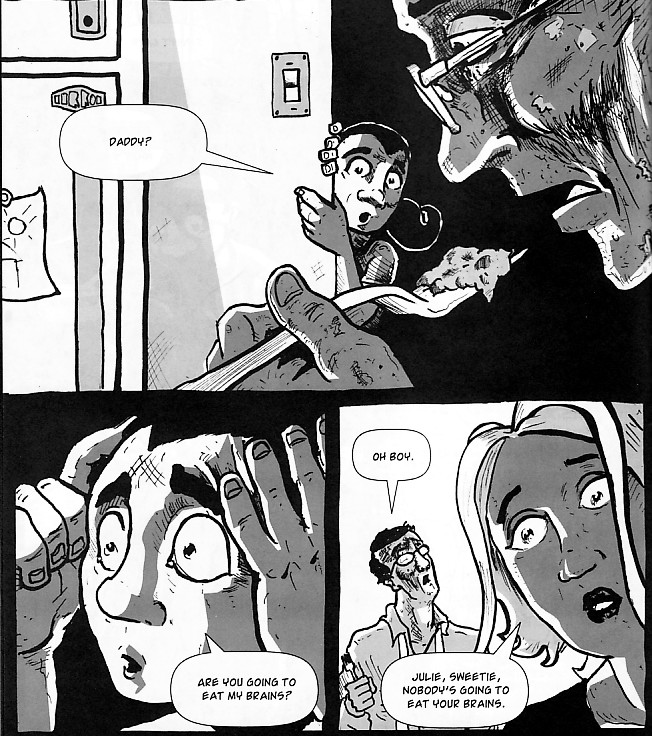 Imagine how it must be for all the trust built up over the years between yourself and your child to just disappear in an instant. While we ponder that issue, Shepherd decides to distract us with a humorous twist. 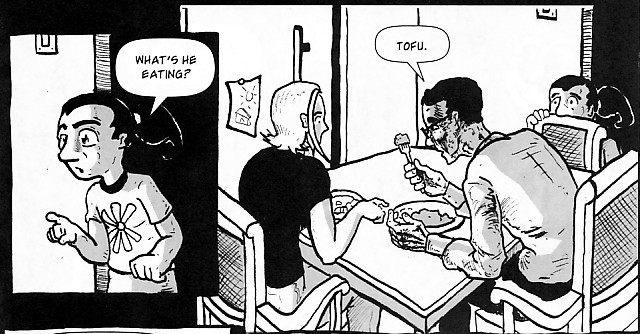 And then digs right back into the mega-heavy bizarreness of this situation. Followed by another brief chuckle. 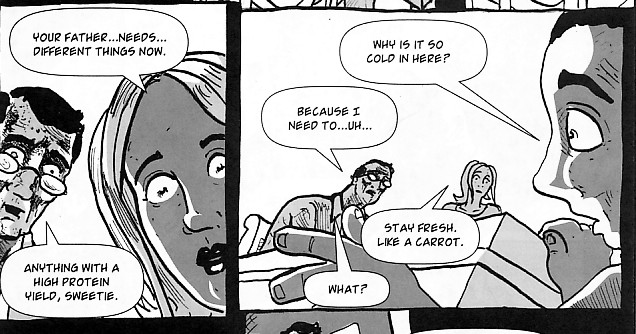 But the end result of all this is the visual representation of a total break in the bond between Father and daughter. John’s death has made him into a monster in the most horrible way possible. He has become a monster in the eyes of his child. Even if his spirit and actions do not paint him as such, that is what she sees. Again, this is symbolic of what aging does to us in modern society, where our seniors are shuttled off to nursing homes lest their gruesome appearance offend the eye of those still in the bloom of youth. 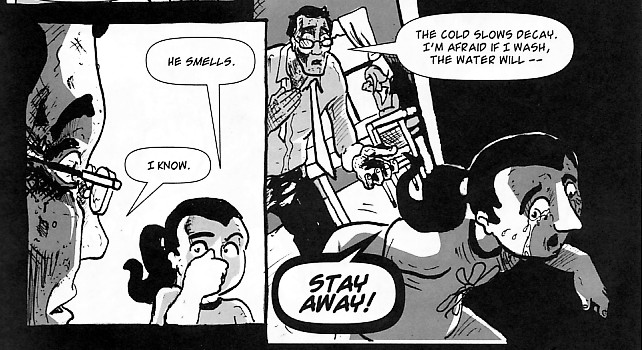 Julie’s confusion becomes a point of hostility against her Father. She threatens to tell everyone at school what’s happened to dearly departed Daddy. John clearly is afraid of her telling anyone and tries to barter with her. Next he threatens her with the normal grounding-no allowance-no toys responses. Seeing this is getting him no where and desperate to not have his secret out, John does something regrettable and utterly human. He lies to save himself, further damaging his relationship to his daughter. Desperation is a horror unto itself. 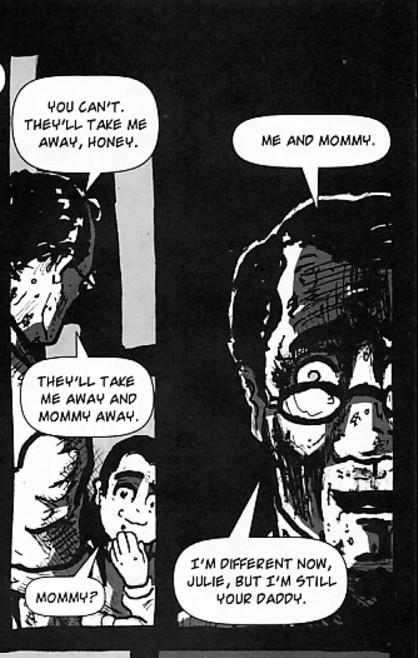 The final panels in this sequence underscore Julie’s frustration with the situation, her Father’s need to reinstate his position in the family and his complete and total anguish at his physical and emotional state. I’m speechless at how the minimalist art and on point dialogue translate all of the raw emotions so well here. Bravo! 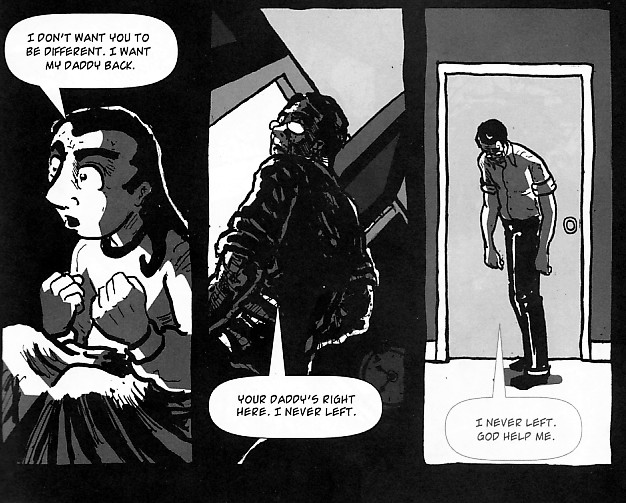 There’s more to the issue. John finds out there are more “people” just like him through an Enquirer-type article. The same article mentions that the government is destroying any living dead they find. John spirals into despair as he notices he can’t smell anymore, a subtle hint that more of his humanity disappearing. Julie, frustrated and in trouble for fighting, spills the beans at school. But not before Henry calls John, having OD’ed on pills but failed to “pass on” so to speak. All of this being overheard by our big brotherish government, who promptly send in the troops to dispose of Henry’s still moving body. The army men turn zombie Henry into Swiss cheese.However, John is rescued from the same fate by Major Garrett and his underground group of zombie revolutionaries. I’m not going to show you any of this because for once I’m going to heavily suggest you trot down to your retailer and ask for the trade paperback. Expect me to be in line for a copy too. I’ve got to see how this turns out for “Mr. Carrot.”

Posted by SonOfCthulhu at 5:50 AM