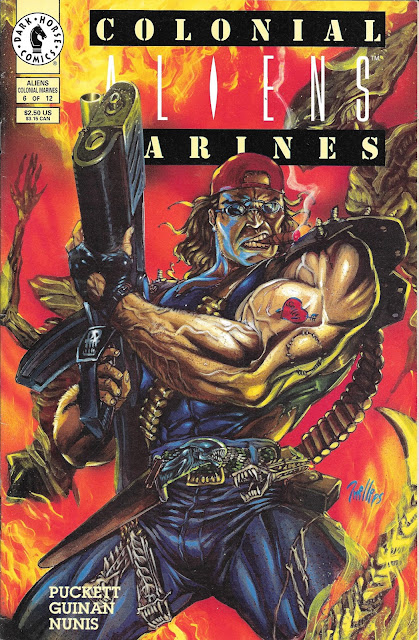 This is where overkill started to set in. Dark Horse realized they could make lots of money off the Aliens series and they started throwing everything they could into new scripts. This series was slated to run for 12 issues although other sources state it only ran for ten of those. Creative team shifts and mid-run delays dropped two issues off the number. It didn't wrap up as cleanly due to the lower issue count.

Either way, due to its long publication time, it shared the shelves with no less than TWELVE other Aliens titles at one point or another.

Not saying there weren't some good titles out there at this time. Just stating that any drop in quality of the Aliens properties during 1993-1994 could possibly be attributed to the sheer volume of stories getting green lit.

Let's dive right into the middle of this one and see how it plays out?

Six issue in is a lot of history to unpack, so let's lay some groundwork. We begin with our leader Lieutenant Henry who winds up leading the absolute worst troop of marines ever as a reprimand for past offenses. That includes one private Carmen Vasquez, sister to the late bad-ass who bit it in Aliens. Also along for the ride is a suspicious company man by the name of Beliveau who may not have the marine's best interests at heart.

Henry's troop found themselves stranded on a space station called the Sun Gun, a place at the tail end of space that was full up of Aliens. Once they fight their way clear of the station, the hope is to catch some R'n R on the nearby planet Bracken's World. Unfortunately, the troop finds the watery ball to be infested as well.

And they are now under a full assault… 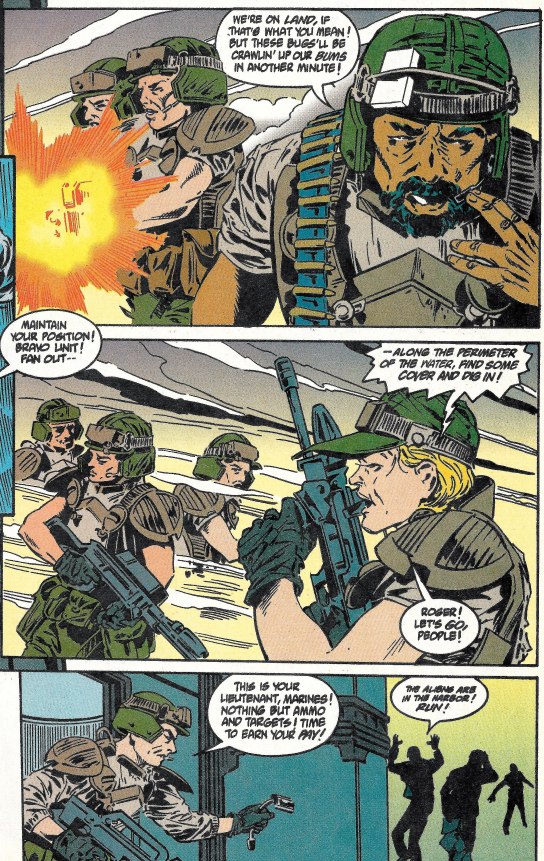 The planet is an algae farm for other colonies and the Alien "bugs" have been kept out by a water gate that just fell. As this solider puts it, doesn't appear they will make it out of this one given the number of bugs attacking. 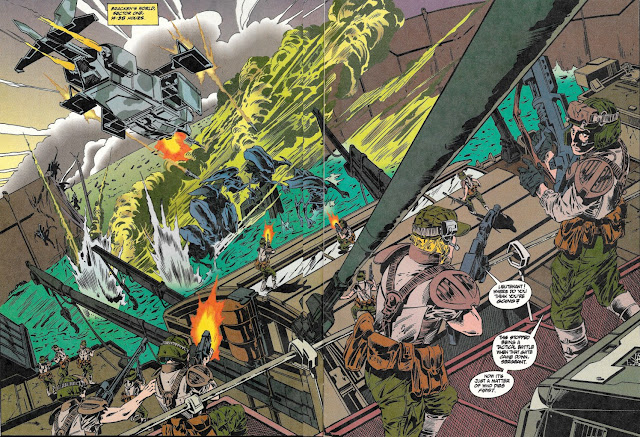 The do have dropship support and right now that is evening the odds somewhat. Meanwhile Beliveau and another unidentified get watch and seem to almost admire the Alien's strength. Never trust Company men is all I've got to say. 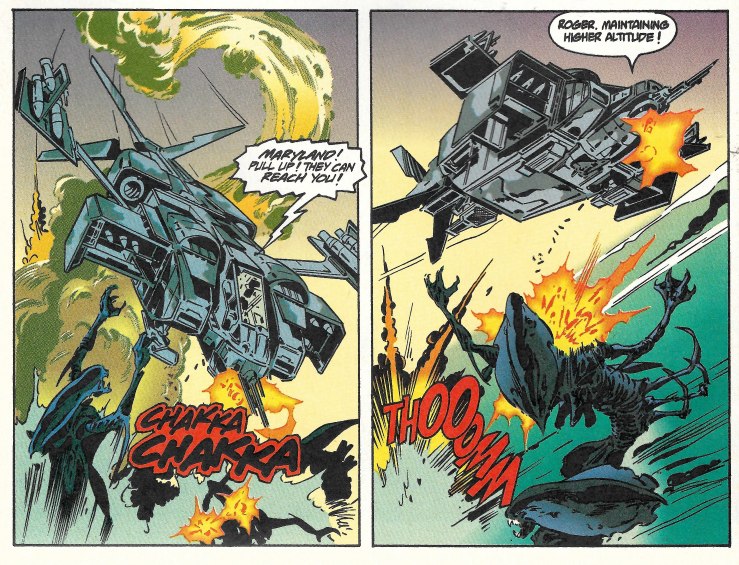 Meantime, Vasquez's sister is trying to hold it together. She thinks she's tagged this bug, but it is about to come over that box and take her down. 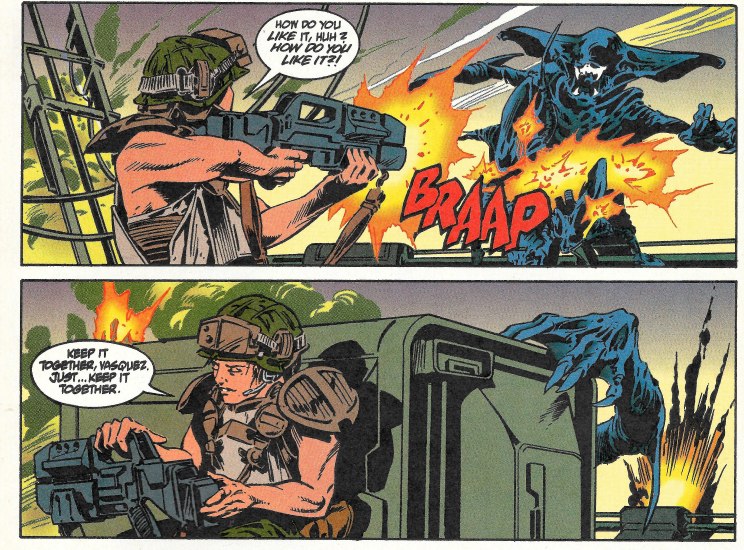 Lucky for her that someone chunks a beer can at its head at precisely the right moment. 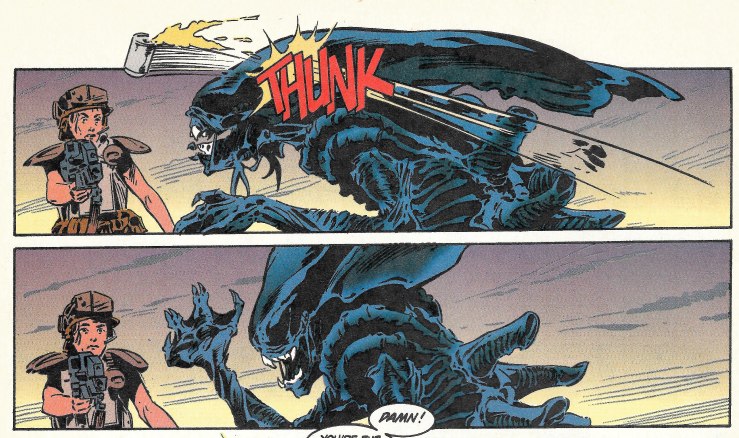 Meet my least favorite part of this book. In his first appearance, allow me to introduce Herk Mondo. Mondo is an Alien-killing mercenary that you'll learn more about in a bit. Let me say this: Aliens doesn't need a "Schwarzenegger" Commando-type in it. The idea is fear. Fear of death. Over the top, fearless, invulnerable heroes have no place in this universe. They turn the whole thing into a farce. 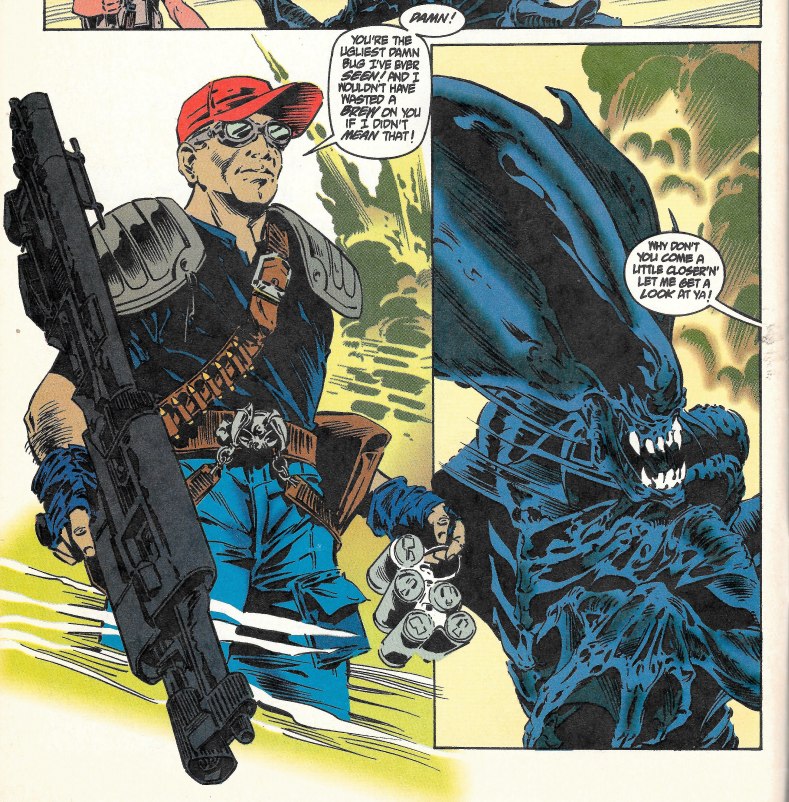 But what do I know? Herk became a "fan favorite" and showed up in other stories. He wasn't a fave of this fan, for sure.

So Herk's big deal here is to throw a beer at the Alien to get its attention, insult it, and then… 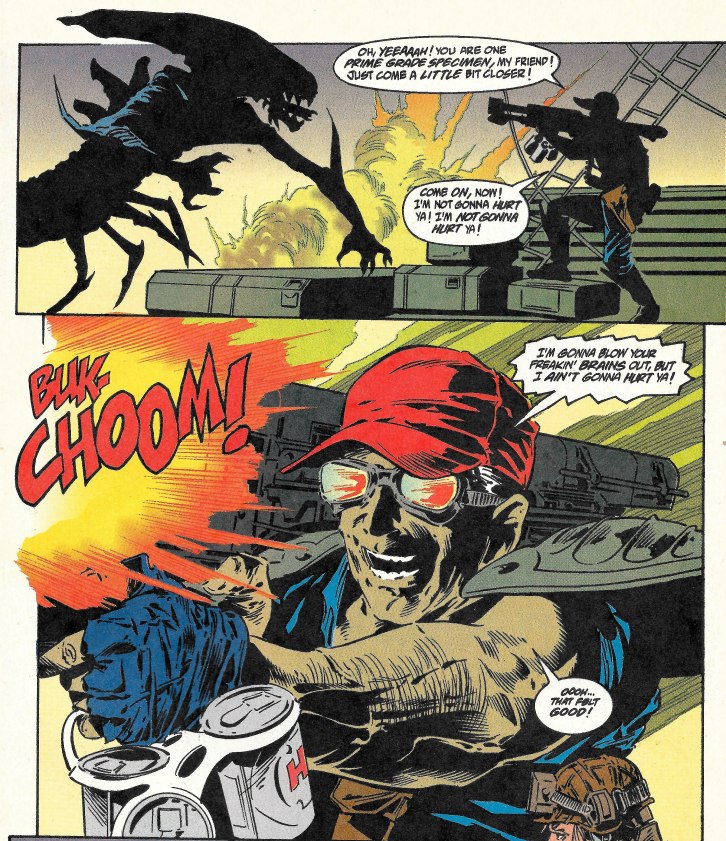 …shoot it with an impossibly huge gun. Because that is what the Aliens franchise is all about. (no, it's not – just in case you were wondering) 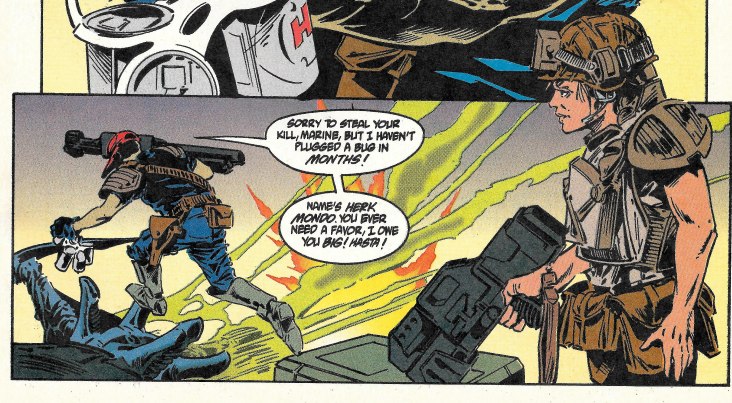 And with that, he disappears off panel and doesn't kill anymore Aliens that we see. Ugh these two panels were jump the shark time for me. It turned the book into a farce and I'm not having it.

But the review must march on, so here we go.

Back to marines that are afraid of dying and such. With the odds still not looking good (especially since the unkillable super-marine has bagged his one and only kill and retired to drink the rest of that six-pack, I suppose), Lt Henry receives a wild plan to save their butts.

That's great and all, but I can't parse this page with the prior. In the Herk Mondo panel, there are no stakes. No one is at risk. It is all fun and games with the good-guys winning never in any doubt. Now the book asks me to believe they are in a life-or-death battle that they can win only by destroying the population of this world's only crop.

I'm not buying it. If it was such a desperate situation, why isn't Herk out here tagging Aliens left and right too? His butt is on the line as well. Makes no sense.

Anyhoo...they do the thing and everything catches on fire… 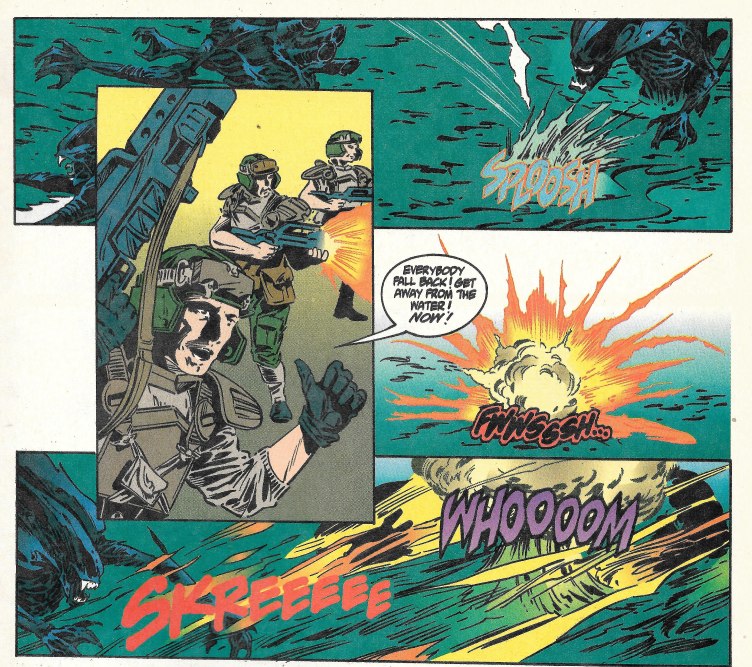 …including the Aliens in another two page spread. 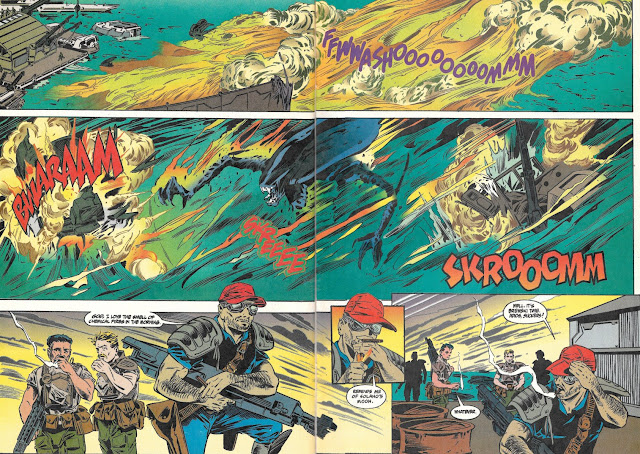 Oh, and I guess Herk WAS around, we just didn't see him doing anything. Possibly because he wasn't. He was only on-hand to say his plithy one liner and the vamoose. 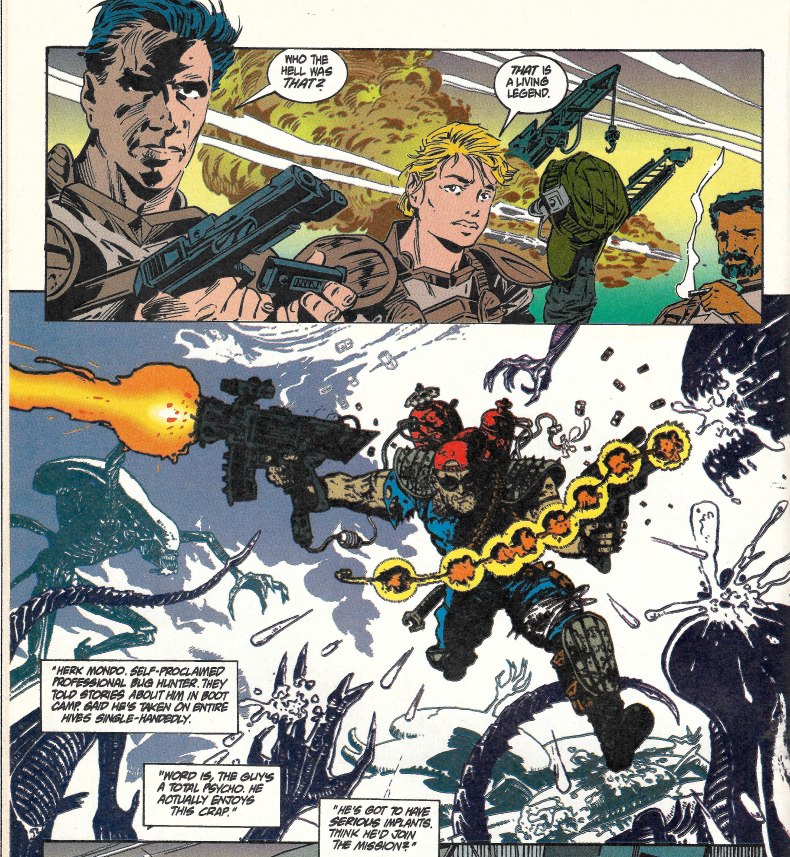 As he leaves we get his backstory which sounds too good to be true, like some kind of Mary Sue character. It is just grating. Let's move off to something else, please? 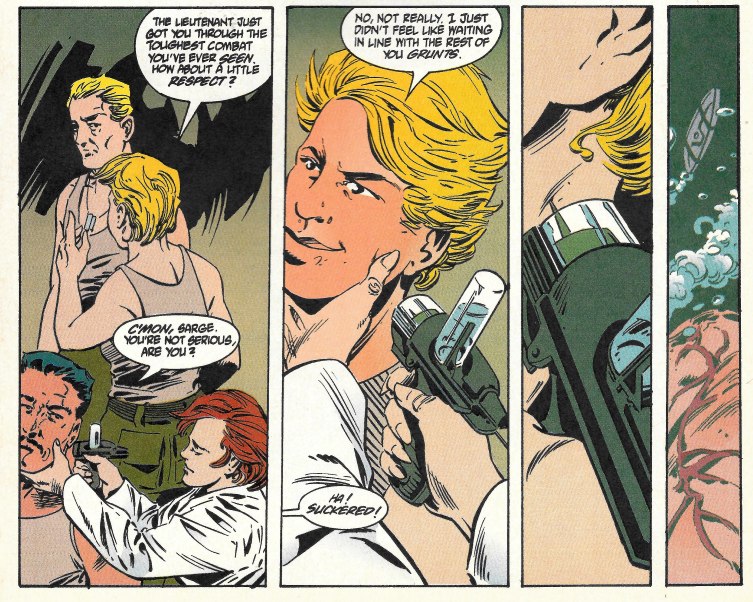 So we move on to the troop getting there Zip rations, at least I think that's what this is. Whatever it is, by the end of this series they will be out and dealing with withdrawals at the same time the Aliens are attacking. I've seen the plot summaries. 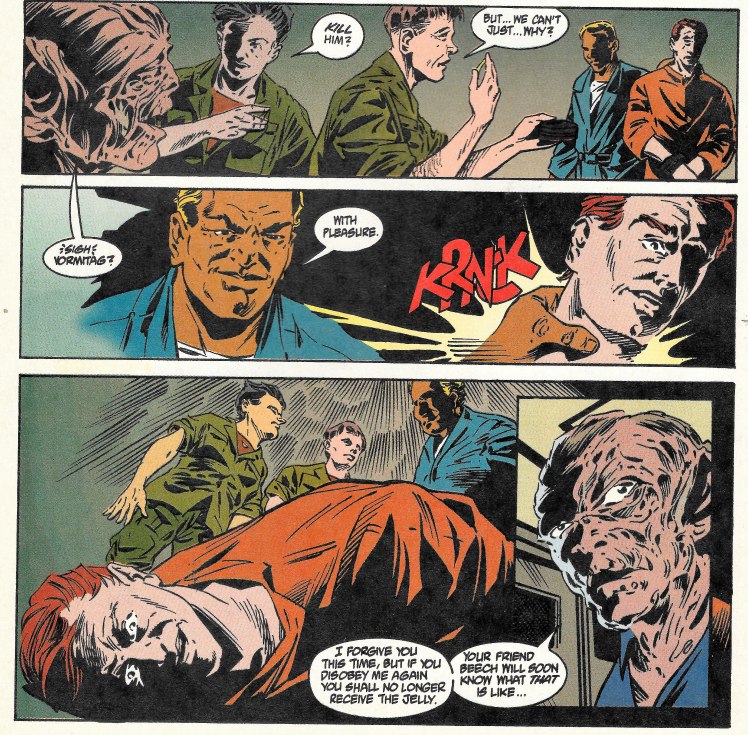 Next up we've got these two, Chen and Rosemas, who may be soldiers and who may also be in prison. They've been getting a supply of Alien royal jelly from the acid-scarred-face guy who then tells them to kill another inmate(?) as a sign of loyalty. When they don't, this happens.

Meanwhile the people the marines saved are mad because they now face an uncertain future with no crops to sell. 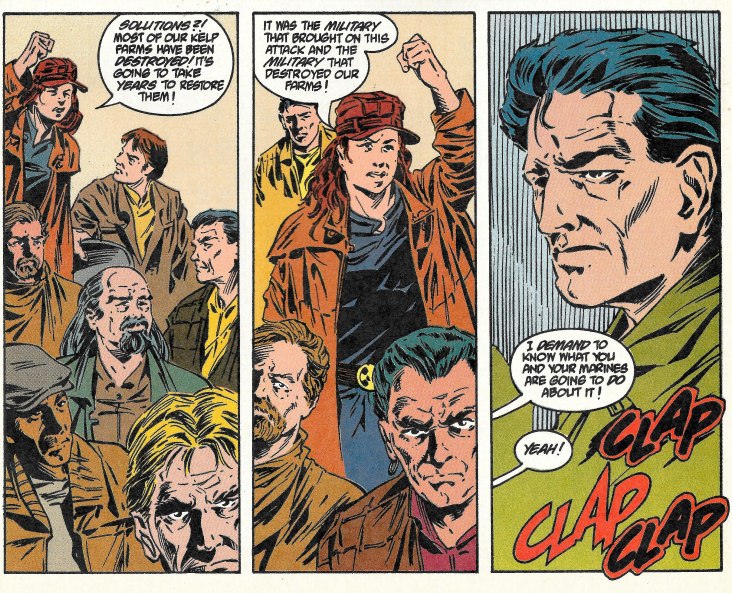 The Lieutenant's answer is to get in their face. 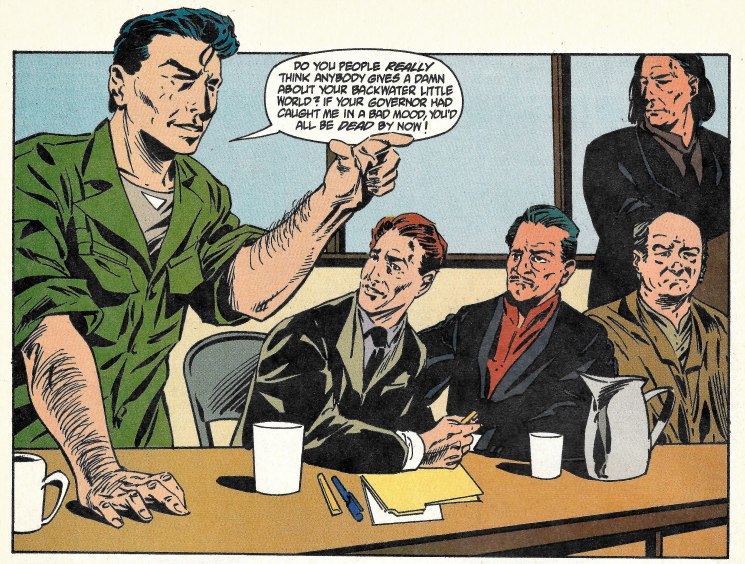 And while he is kind of right, he's also kind of wrong. You can't just do as you please just because you have rank in the service. That's dictatorial, authoritative nonsense. It's wrong to claim he has NO responsibility for his actions just because it was a military operation. I mean, that kind of absolution gets us all in big moral trouble.
But whatever. He stalks out and we turn the page to Beliveau asking if he and Vormitag (another company shill) can go along. He even makes an offer to Lt Henry of private info about what's been going on with the Aliens and the military industrial complex. 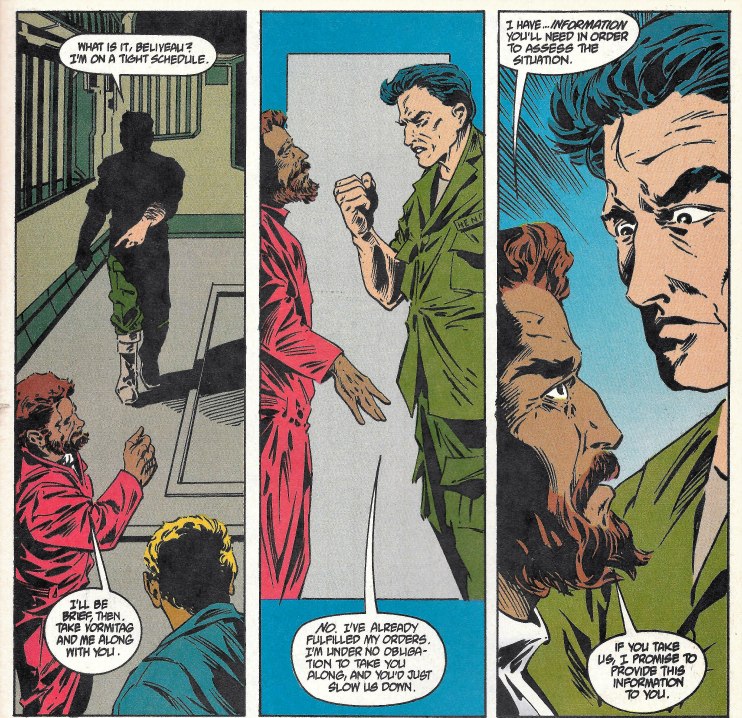 After Henry agrees, Vormitag has words with his coworker. 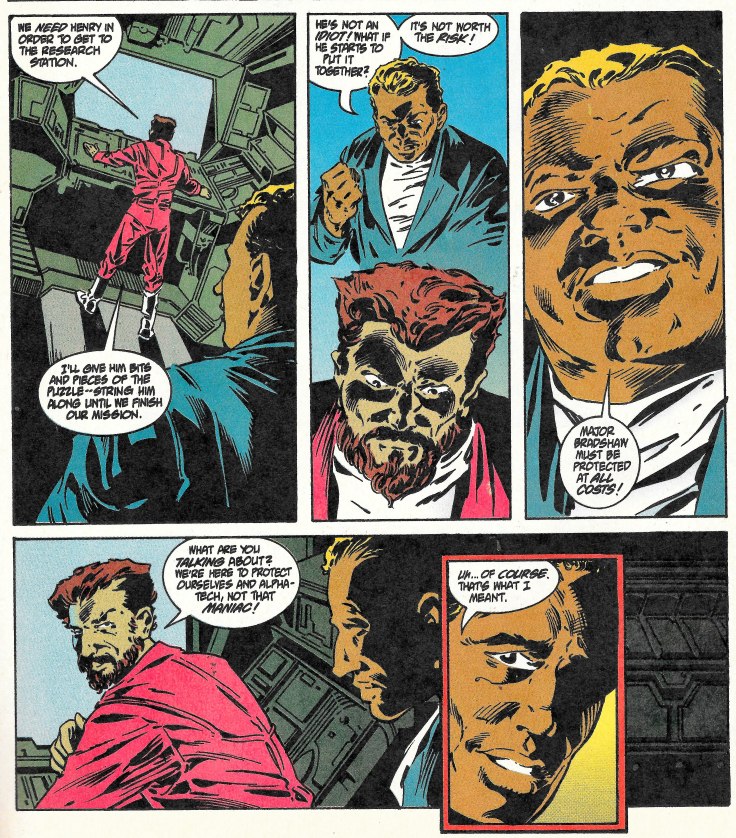 Appears this "Major Bradshaw" must be behind everything and Vormitag has undying allegiance to him. We'll see how undying it is when he ends up on the wrong end of a Xenomorph.

We turn next back to Lt. Henry laying out the next mission for the troops. It is a grunt's worst nightmare: building a communications array that has been taken down (by whom? Hmm) and in anticipation of all the belly achin', Henry has taken some drastic proactive action. 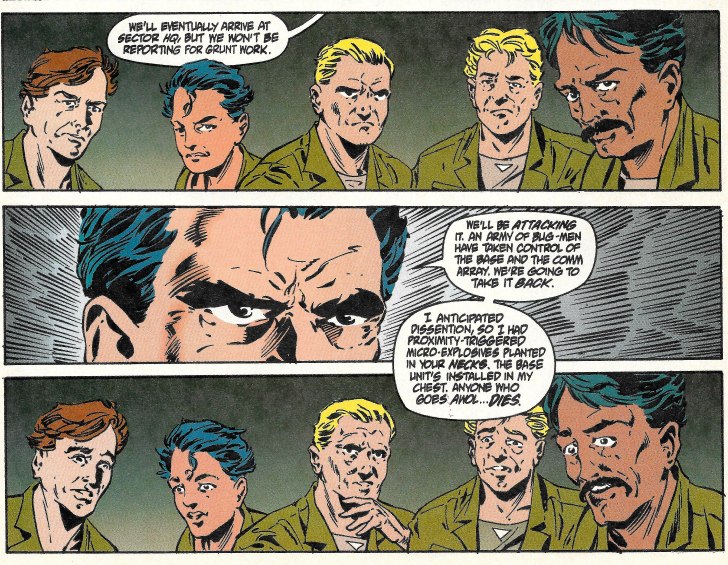 Yup! And to make it seem MORE like Aliens meets Suicide Squad... 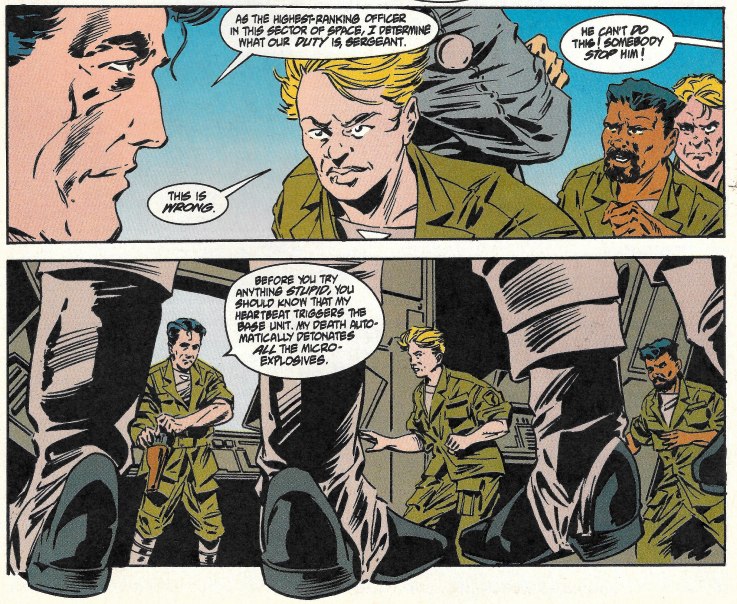 All this fun is interrupted by the team's synthetic, who tells them their ship in orbit is breaking up. 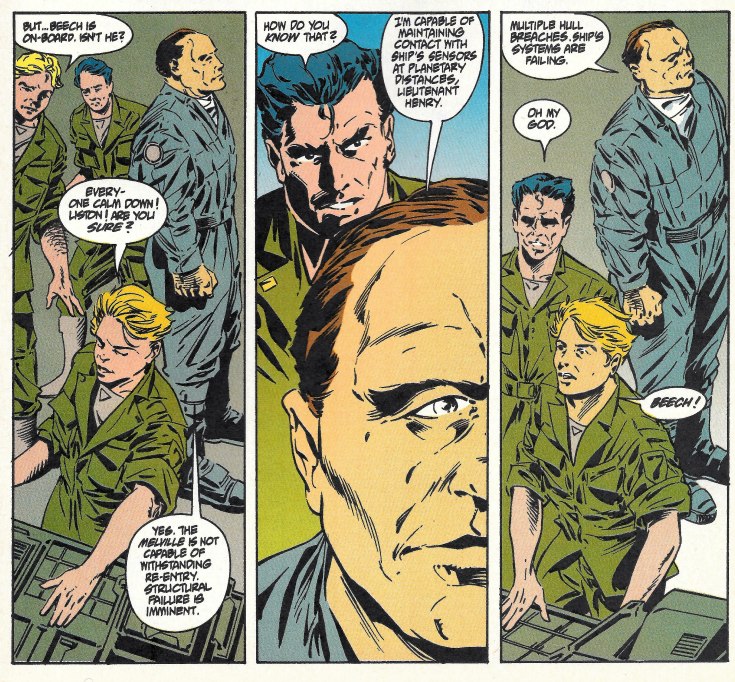 They express concern for their pal left on the craft, but he's in some blue dream riding a Big Wheel while being chased by Aliens, so he doesn't notice he's about to die… 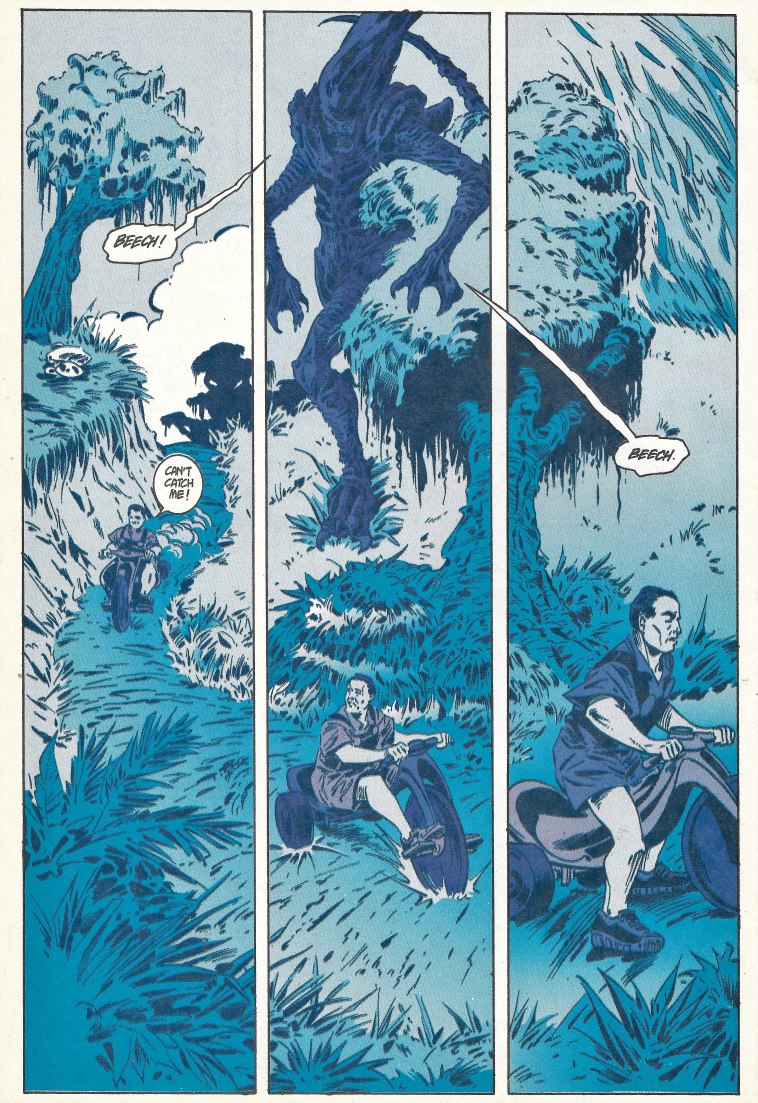 …at least not until it is too late. 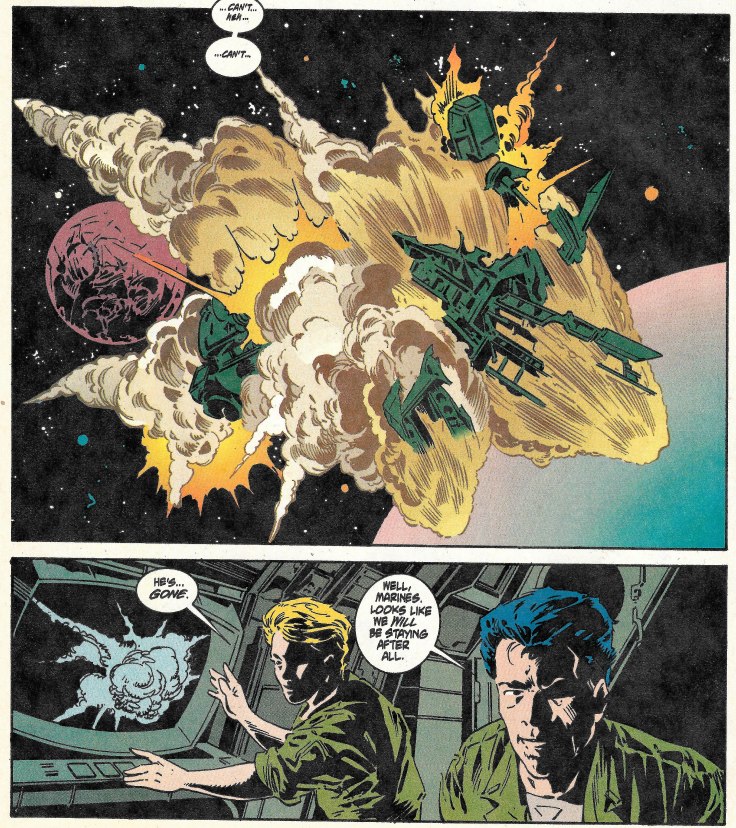 And that wraps up this issue.

My thoughts are that this was possibly the worst out of all the Alien issues I've read, even of the ones to come. The pacing is way off and the tone deflated of all suspense. The added Herk Mondo character grates and there appears to be no one to root for, not even to root against. I can see why it was a 12 issue series that was cut down to 10. I'm disinterested after one issue.

Starting tomorrow we visit a few issues of books that pit Aliens vs Everybody, beginning with our old pals the Predators.

Posted by SonOfCthulhu at 3:06 AM