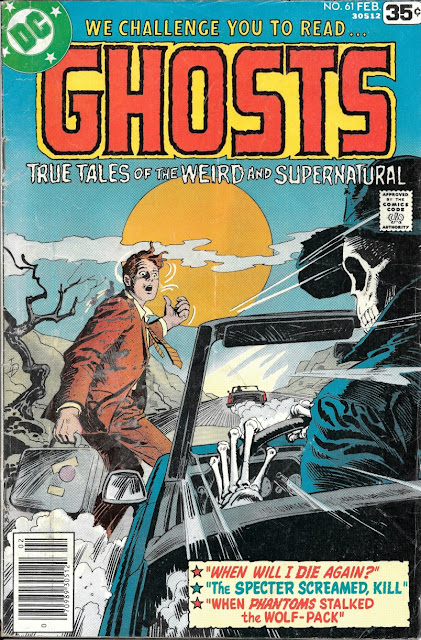 Based on a True Story!


This is the point where I lose a huge hunk of audience.

So in 1971 DC comics began a "horror" anthology series that would last a 112 issues and run for eleven years. While not setting sales records, the run sold disproportionately well, according to DC Comics executive Paul Levitz, which is to what it owed its longevity.

I have to smirk at that last part.

Because you see, I am one of the world's most ardent of skeptics. And these tales seem to have the most tenuous link to the truth ever. But I know I'm in the minority on this one and likely my views will offend someone here. I only have to look at the success of "Ghost Hunters" to know I won't find many afterlife skeptics in any crowd.

The Ghosts title's content can primarily be traced to the work of one writer: Leo Dorfman. Dorfman is the guy that created Pete Ross way back in 1961 and he's also the one responsible for the 1963 tale of "Superman Red /Superman Blue". In addition to his work for DC, he also did a bunch of supernatural stories for Gold Key comics "The Twilight Zone," "Ripley's Believe it or Not!", and "Boris Karloff Mystery" magazines. One of Gold Key's editors at the time told comic historian Mark Evanier that "Leo writes stories and then he decides whether he's going to sell them to DC [for Ghosts] or to us. He tells us that if they come out good, they go to us and if they don't, they go to DC. I assume he tells DC the opposite."

My buddy Chris from Chris is on Infinite Earths tackled issue number 100 just a few days ago, but I'm unsure if they were still doing the "True Ghost Tales" at that late date. Still, you should check out his review of Ghosts 100 too.

This issue comes after Dorfman's exit from this life in 1974 at the age of 60, so likely all of the uncredited stories were the work of Carl Wessler, however without names attached it's a little difficult to tell.

Whomever is to blame, the premise is still a bit "out there," as each story is supposed to be a true tale of haunting spirits. Most of these however are full of speculation and embellishment, with much of the details left to the reader's imaginations. 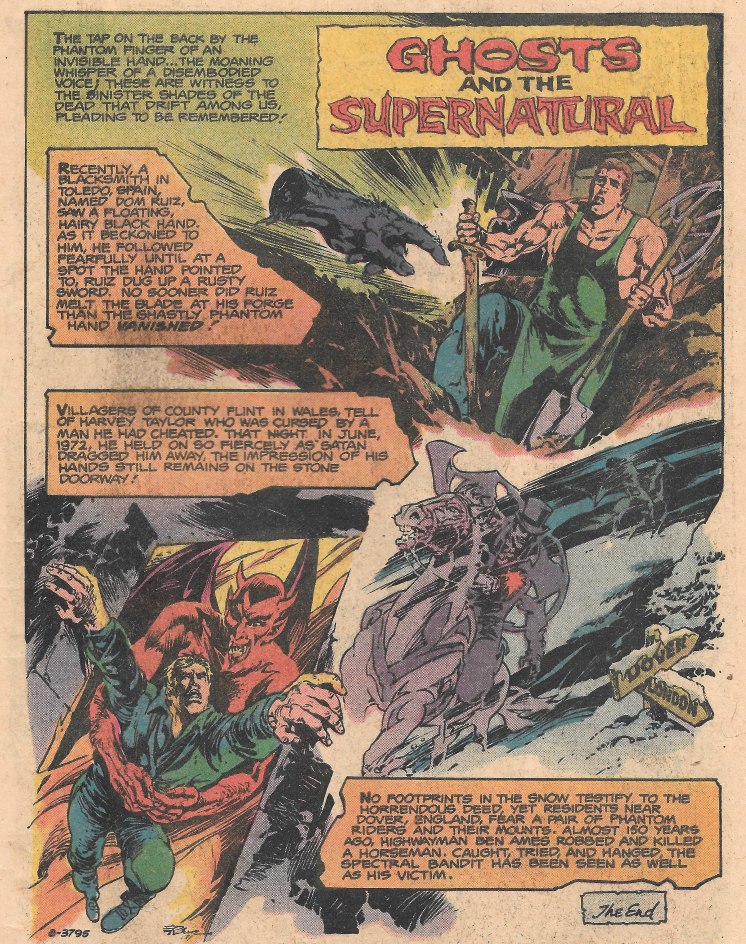 Each issue would begin with a one-page frontispiece done up in "Ripley's Believe it or Not!" style listing some short famous supposed sightings. Here's issue's 61's, just to get you started in that ghostly vein.
So a delusional blacksmith, a tale of a cheater vanishing in the night and bored people snowed in to their house over a long winter make up the three tales in this issue's splash page. Yeah, see I'm sort of a doubting Thomas about these things. But enough about me, let's get down to our first feature in all this (I suddenly feel like the Cryptkeeper), a chilling little tale called… 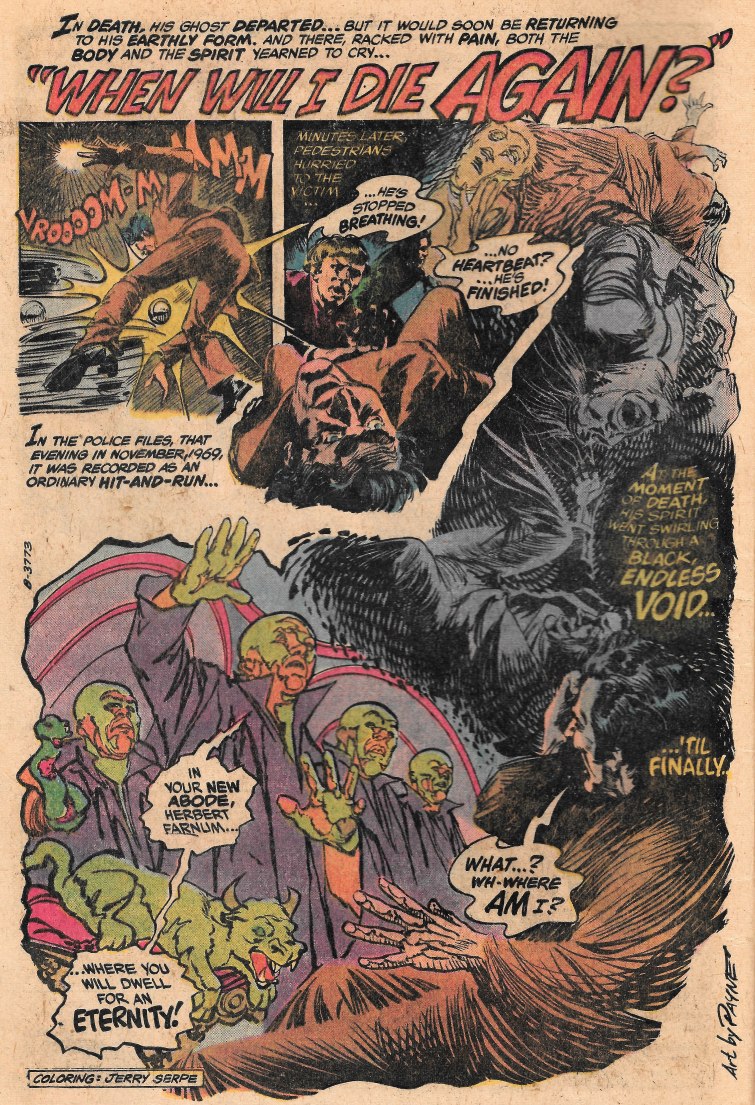 So forgiving for a moment how the author knew this happened in this "True" ghost story, we are to believe that when you die you go to a psychedelic heaven populated by the four bald men of the afterlife? I don't know which Raelian cult spinter-group the author is citing as his source for this, but I would beg to differ on its accuracy.

Either that or that dead guy is tripping balls.

Whatever the case, the new-dead has some startling news for these angelic eggheads: he was MURDERED! 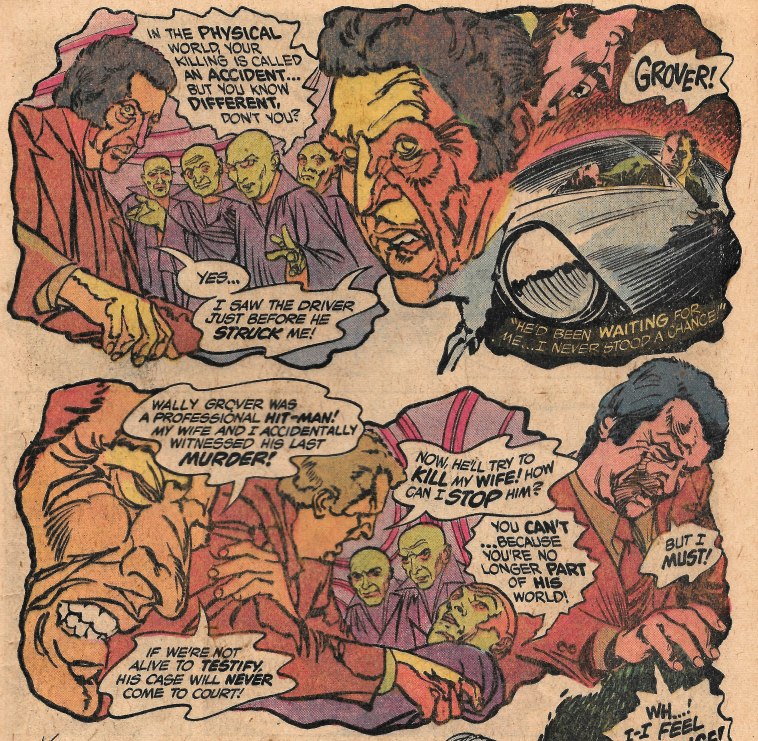 And he might get a chance to warn his wife before she is killed as well. But only if he can come back to life. Got to say that the old school art in this really pumps me up. I know it won't be to everyone's taste, but it kind of reminds me of home. I must have read through spinner racks of these types of stories as a kid and for me that art still harkens back to that younger, less cynical time.

The docs manage to stabilize our hero, but there is some unfortunate news in this as well… 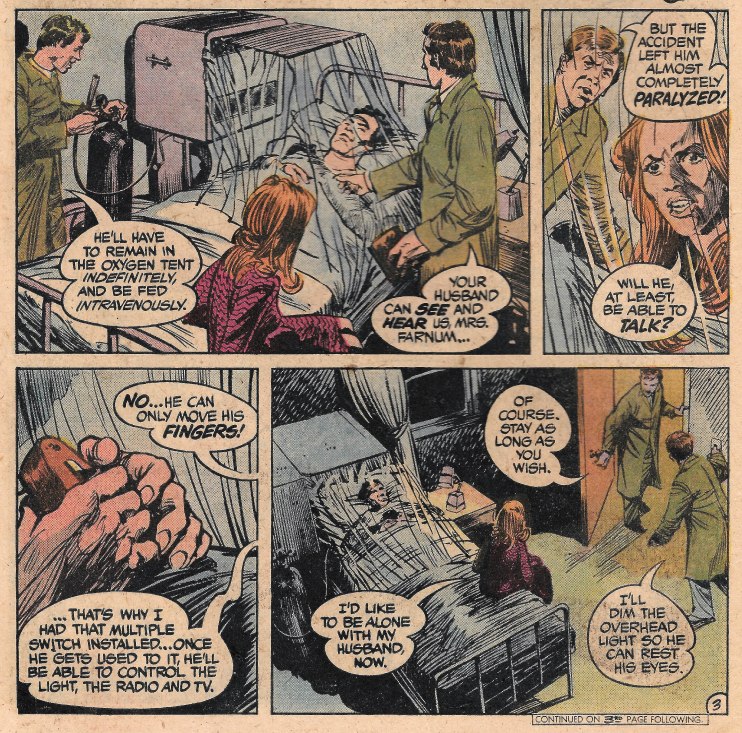 Okay, so there is NO way he was able to tell anyone about the four St Peters of baldness in this state. At this point the author's Pinocchio meter is about broomstick length. Unless he gets the ability to speak back by the end of this tale, I am discounting this whole story as bunk.

His wife can't even understand him. She gets frustrated and leaves. 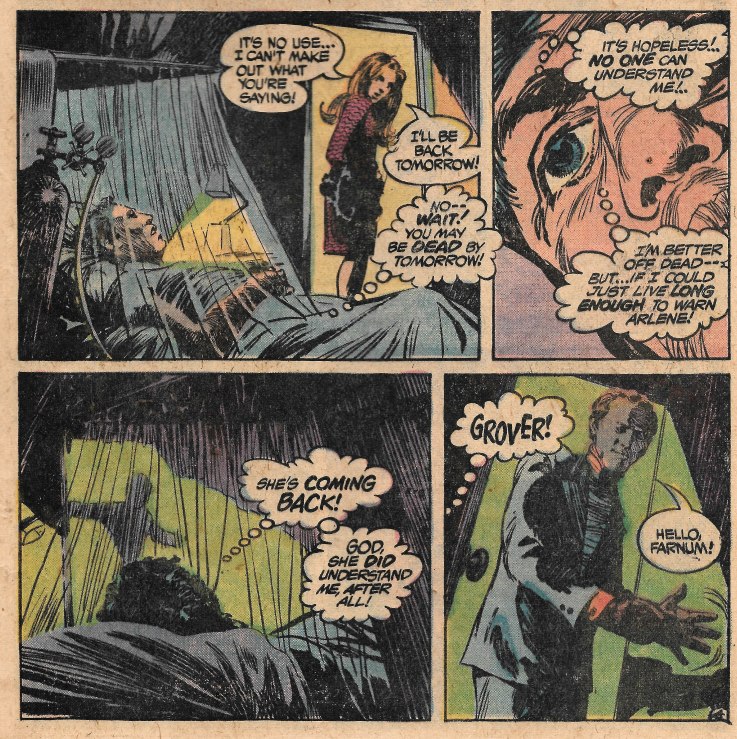 Oh noes! The guy who killed him (almost)! He must be back to finish the job. Maybe he should tell HIM the story of how heaven is a place in need of Rogain and hair plugs?

Doesn't look like he's much in the mood for talking though. He just wants to administer a hypo that will put him to sleep "painlessly …and FOREVER!"

Luckily our hero still can turn off the light switch, which leads to this… 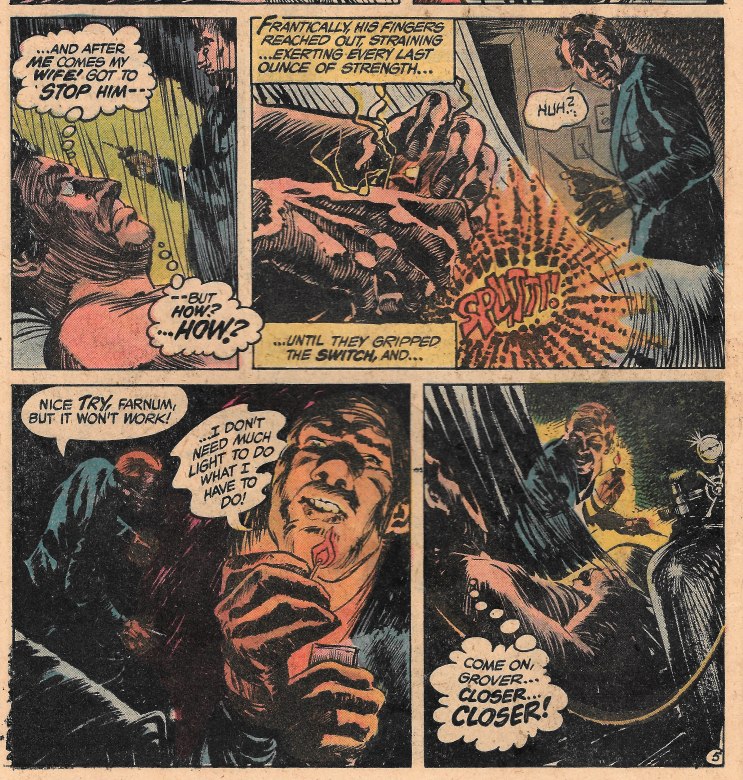 See, in today's world the guy would just have used his cell phone flash. Heck he would be vaping so he wouldn't even have a match TO light. But because it's the late 70's, this happens. 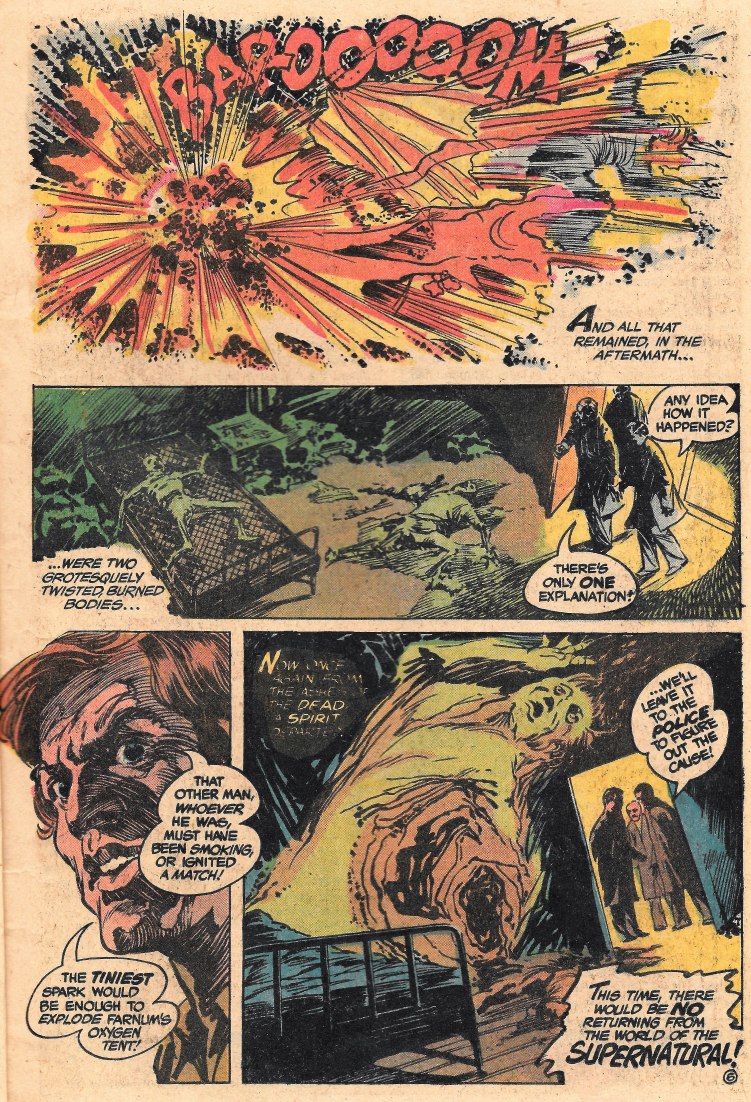 They both got burned all up. I'm calling bullshit on this one.

Our next tale is more historical, although that might not make it historically accurate… 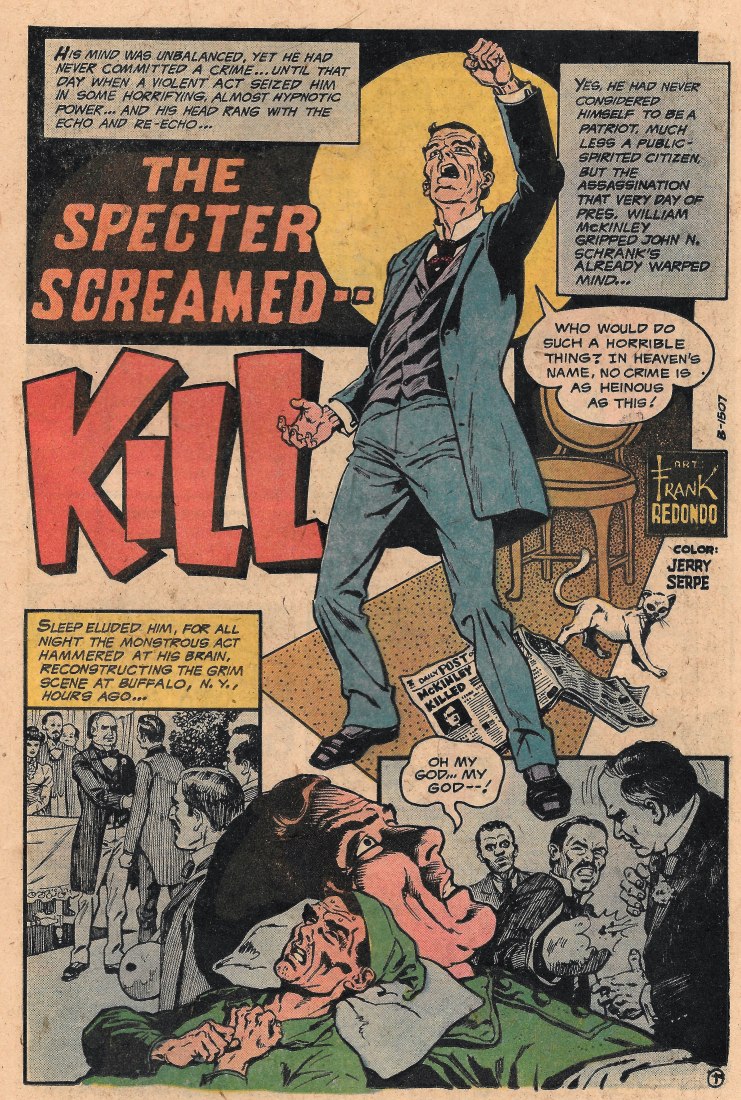 So we begin with another of these really neat splash pages, and if there is anything that gets me going it's the art in this. Frank Redondo is the brother of Nestor Redondo, both of whom did lots of work back in the 70's and 80's. Nestor is the more well known of the two, but Frank's work here really catches my eye. I love that statue-like pose of his foreground figure.

Our story here concerns John F. Schrank, a guy I never heard of before picking up this book. Schrank was a Bavarian immigrant who came here at the age of 9. His parents passed when he was young and he was fostered by his Aunt and Uncle, who died before their time, leaving him a bar. His girlfriend died in a steamboat accident around the same time, leaving him very sad. Since everyone appeared to be leaving him, he became profoundly religious. And then he went a bit nuts.

I'm tempted to finish his tale via what I learned from wiki, but…well, let's let the book tell us… 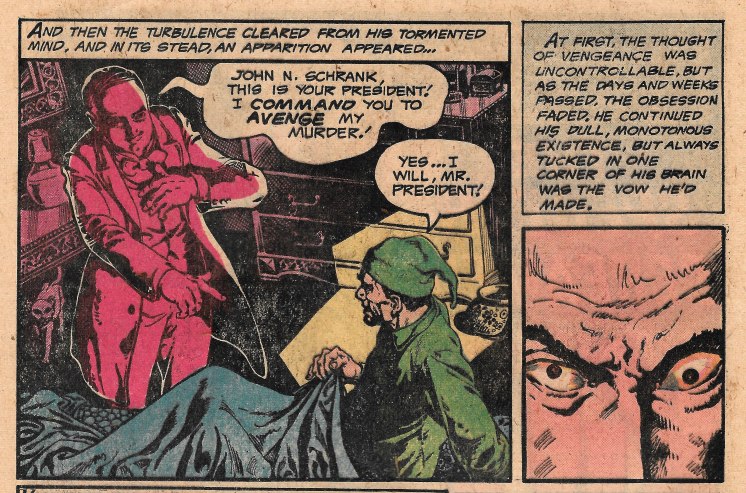 And that's accurate. Schrank thought that Former President William McKinley's ghost visited him in a dream and told him to "avenge his death" and then pointed at a picture of Theodore Roosevelt. I'm going to eat crow on this one, I can feel it coming. 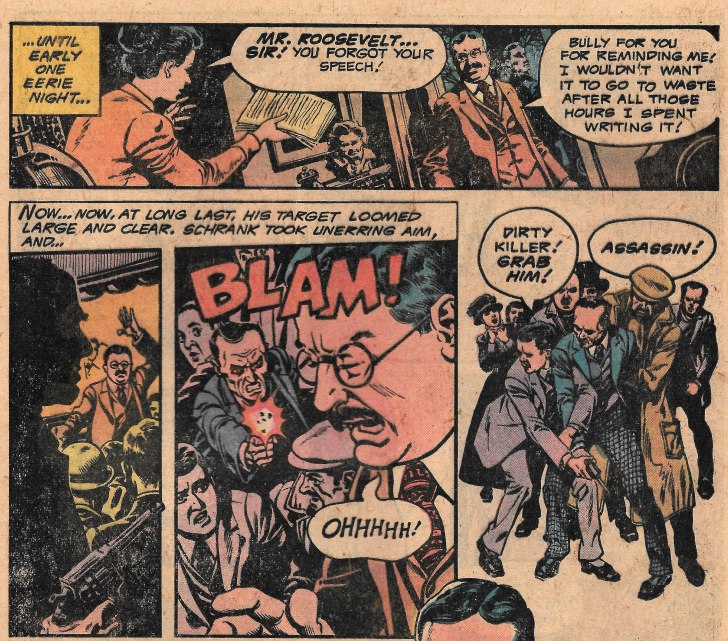 Yup…and this is accurate too. Teddy was saved by… 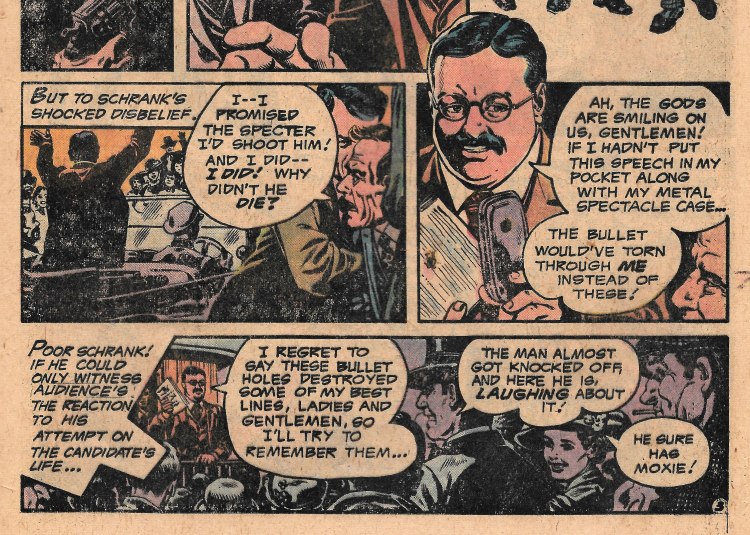 Although in real life, it actually penetrated his chest and lodged there. Teddy even went on stage after the shooting and said his prepared speech, sometimes talking in a whisper, his chest hurt so badly. His opening remarks were:

Friends, I shall ask you to be as quiet as possible. I don't know whether you fully understand that I have just been shot; but it takes more than that to kill a Bull Moose. But fortunately I had my manuscript, so you see I was going to make a long speech, and there is a bullet - there is where the bullet went through - and it probably saved me from it going into my heart. The bullet is in me now, so that I cannot make a very long speech, but I will try my best.

I am in shock but in a good way. Appears I could have learned some actual history from a comic like this. Who knew? Oh, and Schrank was declared insane and sentenced to a mental institution. Since this is a DC book that probably means Arkham Asylum. 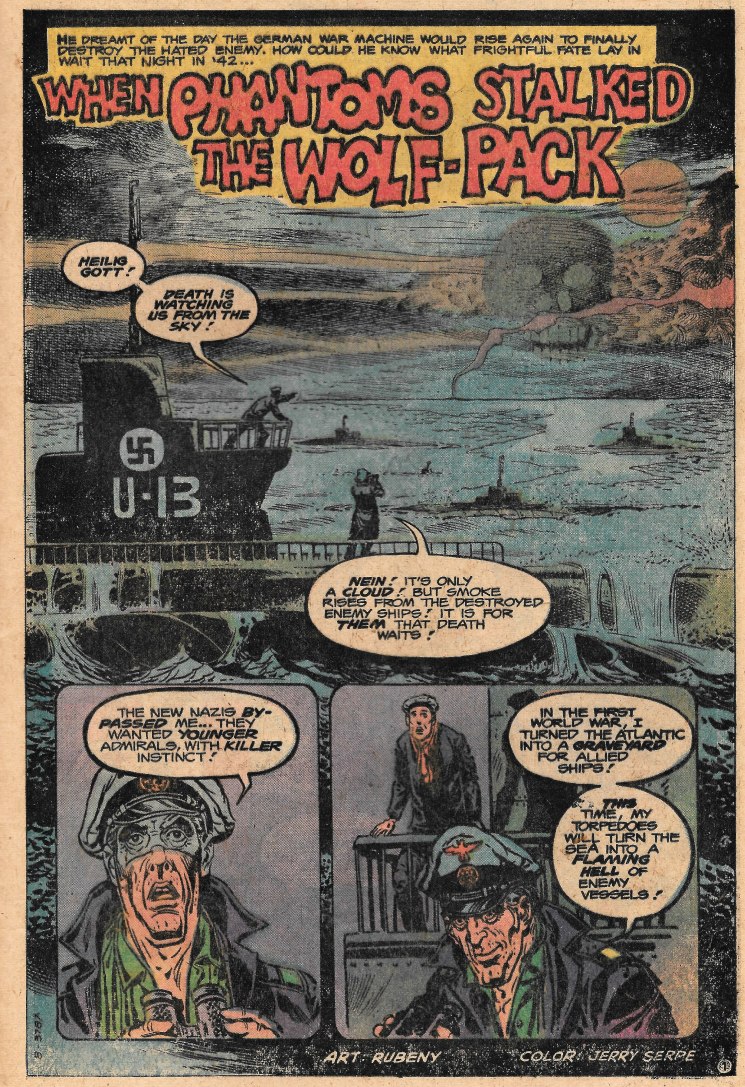 It's also loaded with a heavy dose of cow-plop. None of the source material can be verified. So this unnamed German WWI and WWII commander called "The Sea Wolf" is about to encounter an "allied" convoy off the coast of Ireland heading for an unnamed port… 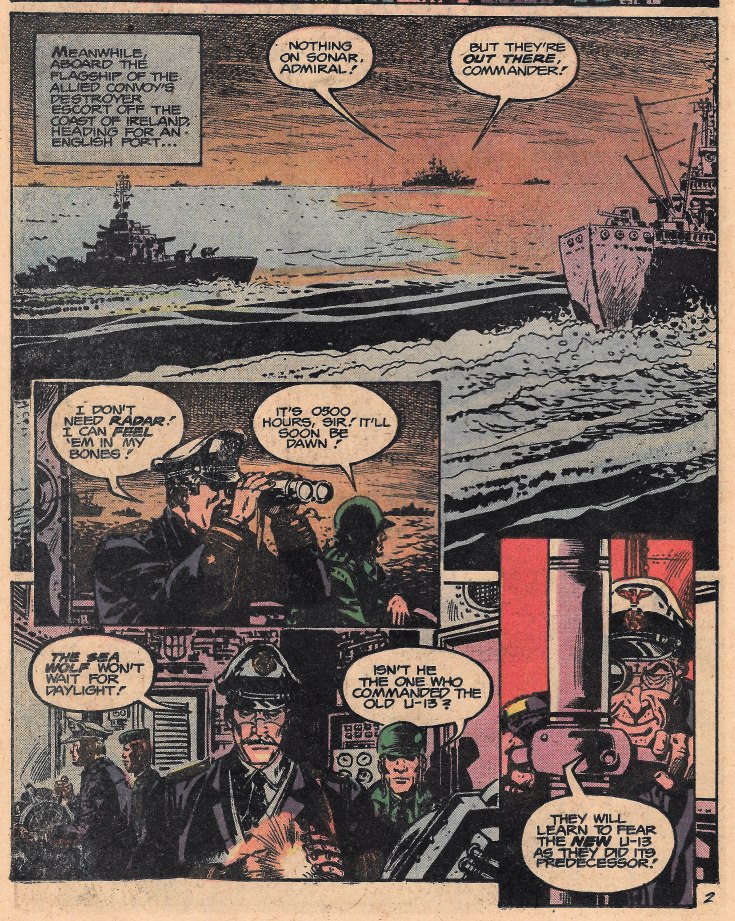 …when suddenly they find this blocking their path. 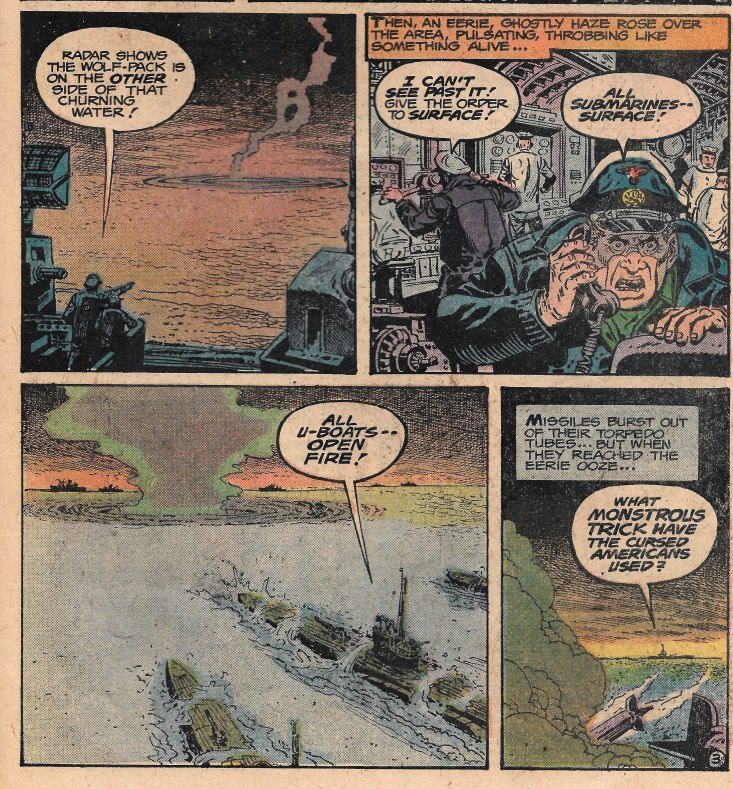 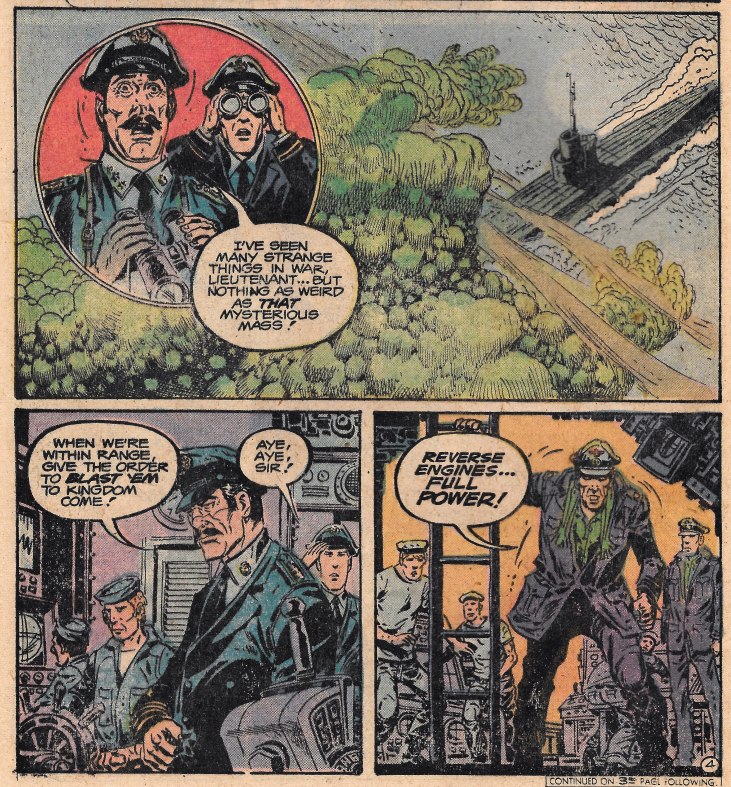 Yeah, I stopped believing when it ate their torpedoes. That muck monster…sheesh. This isn't Swamp Thing. You guys know we had cameras back then, right? Somebody would have snapped a shot of this happening. I've looked up "The Sea Wolf" and don't find mention of him or of this episode happening. 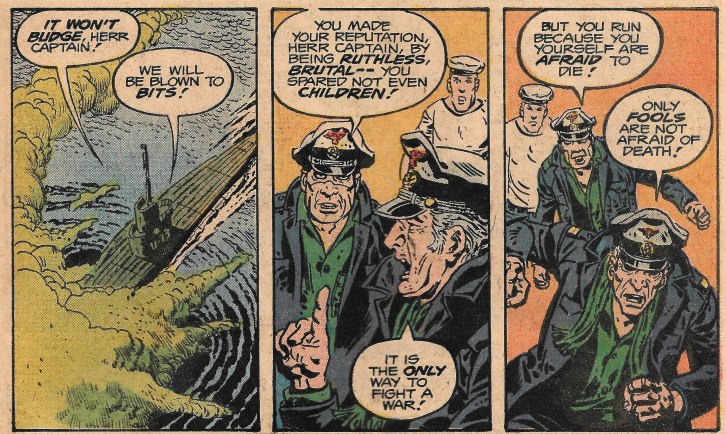 …and forms into seaweed people to break inside it… 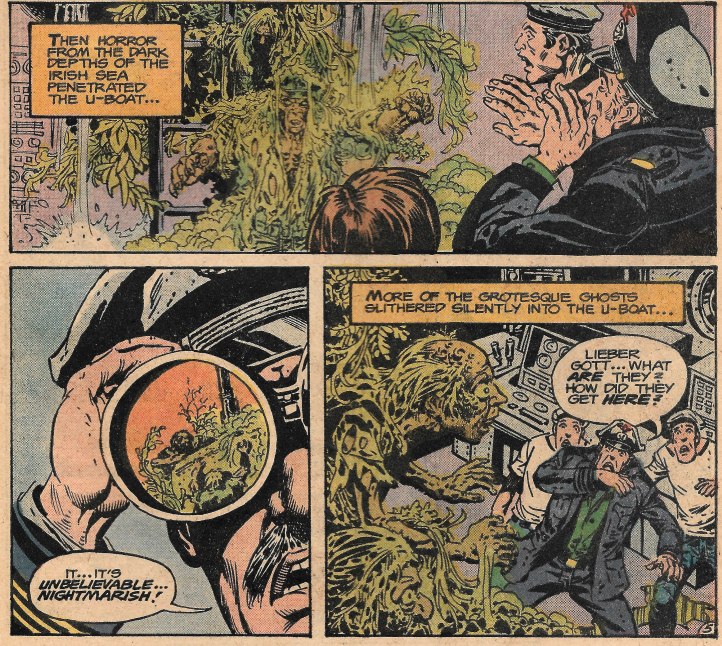 …and that's how everyone inside dies.

I'm like 99.9% none of that happened. And to make matters worse the author throws in this little tidbit about a ship with a famous name to give the story resonance…but not much factual information. 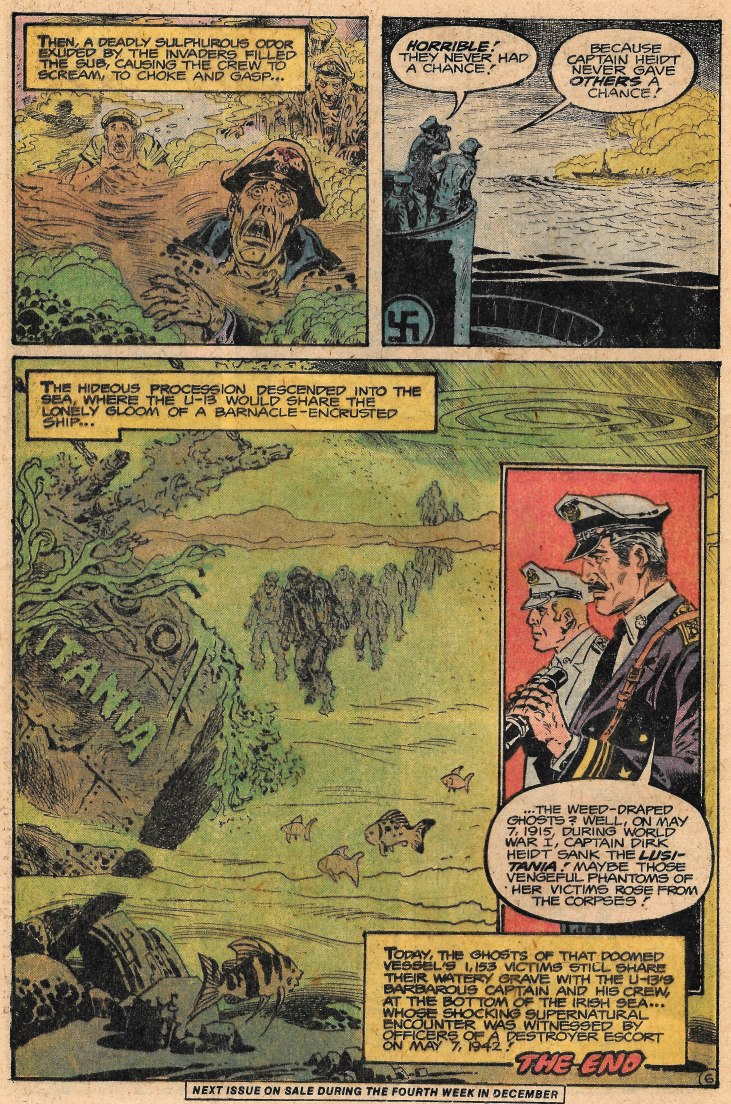 In an interesting side note that relates since we are dealing with the Lusitania, H. P. Lovecraft's first published book was a poem about the ship called "The Crime of Crimes: Lusitania"

So the final tally on all this? As stories, they are a little weak but acceptable. As factual histories, two are full of baloney but the third makes up for them by being very true to the events as described. For entertainment though? They aren't bad. The stories are okay but the art of the time fits the genre very well and overall I found myself enjoying them.

I might look for more of these to haunt my crapbox if I come across them.
Posted by SonOfCthulhu at 4:35 AM