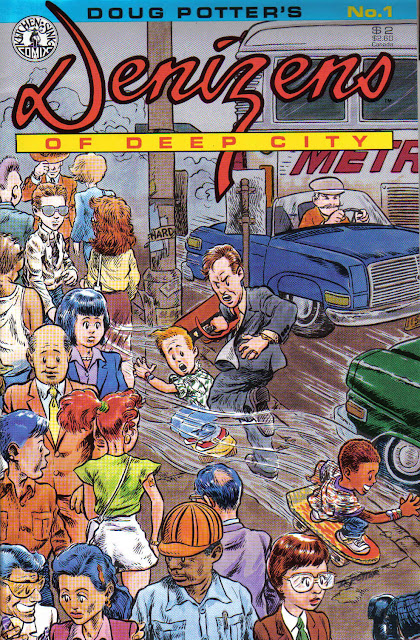 It made me cry and that’s a good thing.

In the introduction to Doug Potter’s first issue he writes “Most of these characters…I couldn’t tell you what will happen to any of them. You never know why a person will act a certain way and they’ve done some things I didn’t plan.” While this sounds like a sophomoric attempt to cover up bad plotting, Deep City ends up being a very cohesive and absorbing story of oddly realistic characters. Potter both writes and illustrates, doing a fine job with each.

Our focus in issue one is Jamey Hooter, an accountant whose sole comfort is his late night TV shows. He lives in an apartment complex that will house a bunch of our main characters. One night he arrives home to find his apartment burglarized. Note what his main concern is. 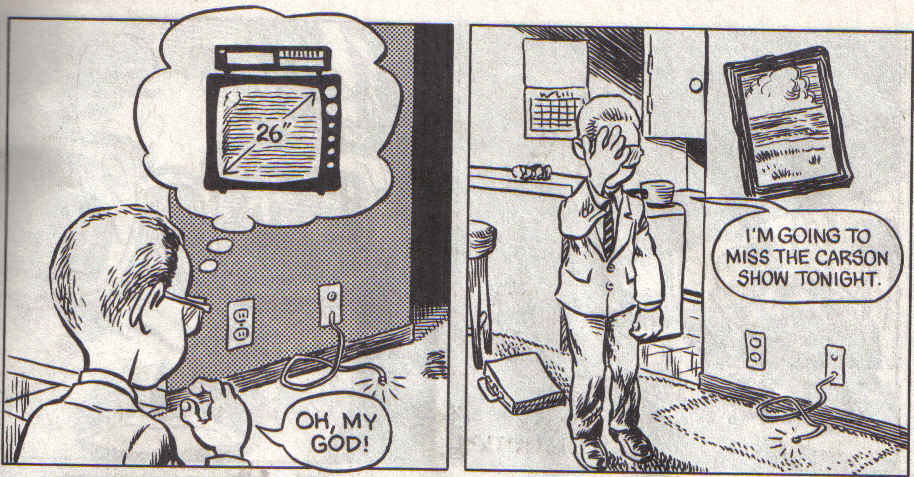 In the real world you file a police report, make an insurance claim and buy a new TV with the proceeds that is better than the one that got stolen. In Deep City you file a police report, buy the TV but find it doesn’t work. You soon find that no model TV will work with your apartment’s cable except the one that got stolen. Also in the real world you never hear from the robbers again. In Deep City… 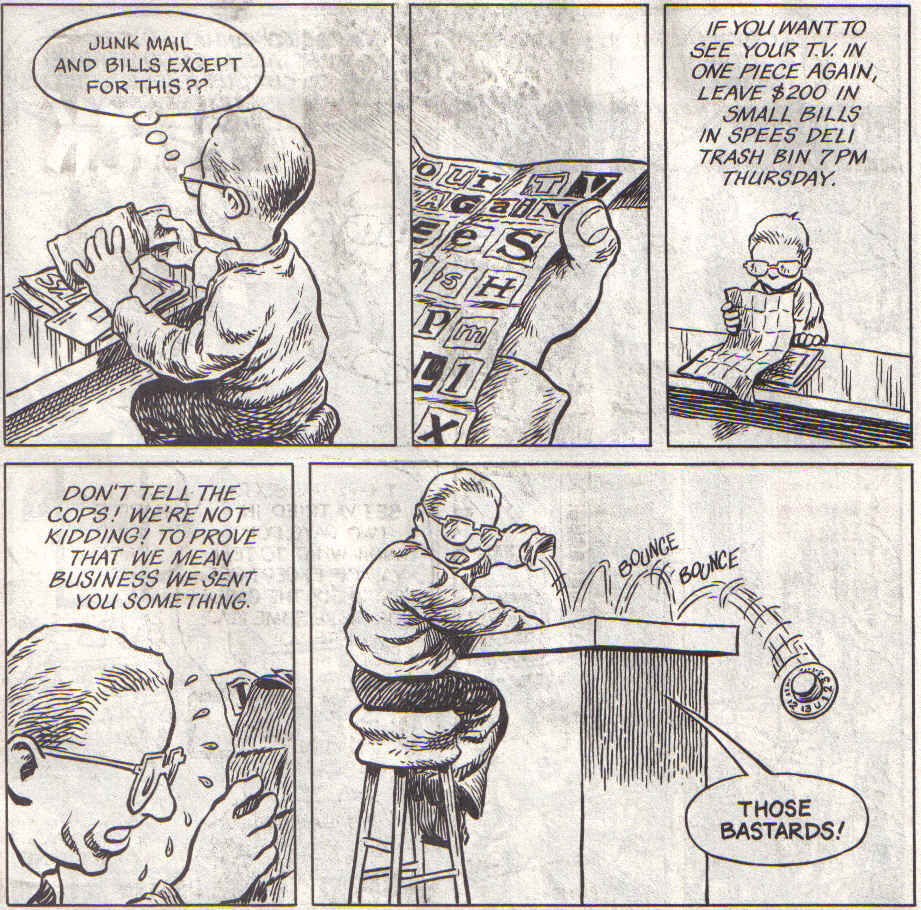 Why am I imagining Reservoir Dogs with a TV set now? Possibly it’s just me. So Jamey shows the cops and they treat him quite a bit better. Even make a big deal about how long it would take someone to paste up the note he got. They even setup a sting operation with snipers and everything to catch the TV-nappers.
But the bust goes bad as a wino mistakenly picks up the drop and the real perps get away. Who are these diabolical miscreants? Two preteen boys, a modern day version of Oliver Twist and The Artful Dodger have acquired Mr. Hooter’s TV. Unfortunately all of this excitement with no pressure release has caused Jamey to lose many nights of sleep. 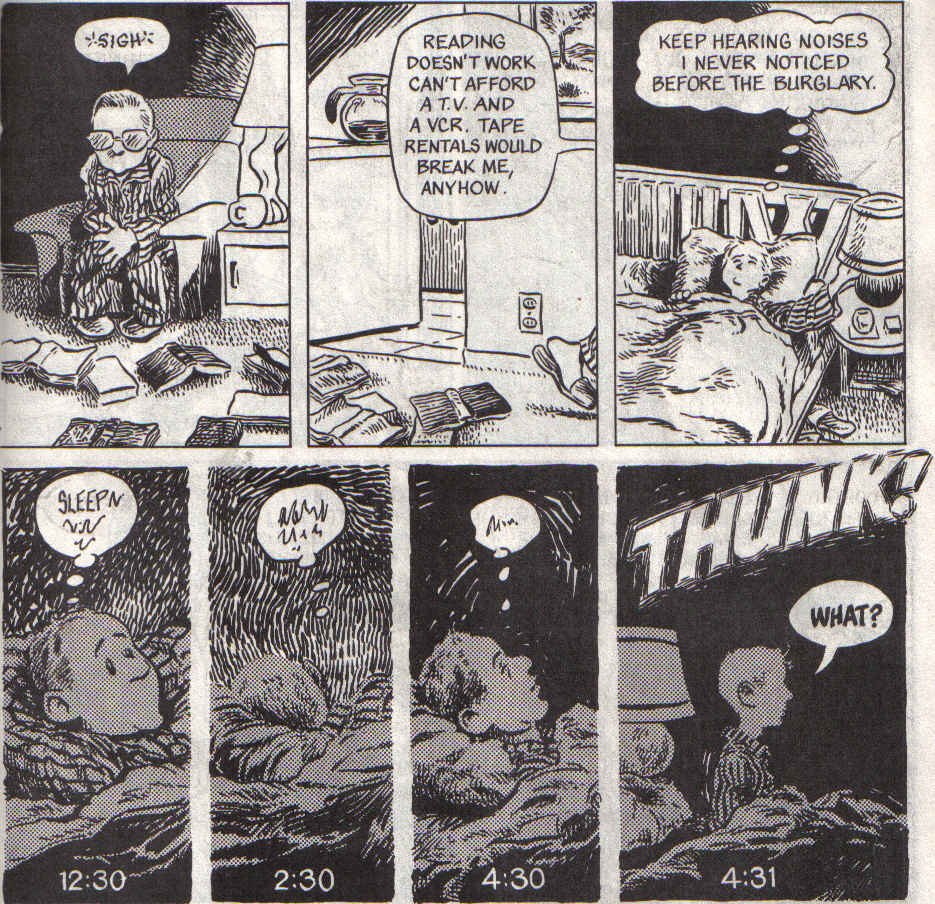 That “thunk” was the newspaper boy making a morning delivery. While all this is occurring, we meet several of Jamey’s neighbors in the apartment complex and get to know a bit about their personal lives. This is all buildup for future stories and it is done well enough to keep us interested but doesn’t distract us from Jamey’s plight. Note also the quality of Potter’s art. He gives enough details and nuances so we get a range of character emotional depth from the pictures, yet the still retain a very simplistic, cartoony look.

Deep City keeps pouring it on for Jamey too. The TV hijackers continue to harass him by sending more envelopes. Filled with what you might ask… 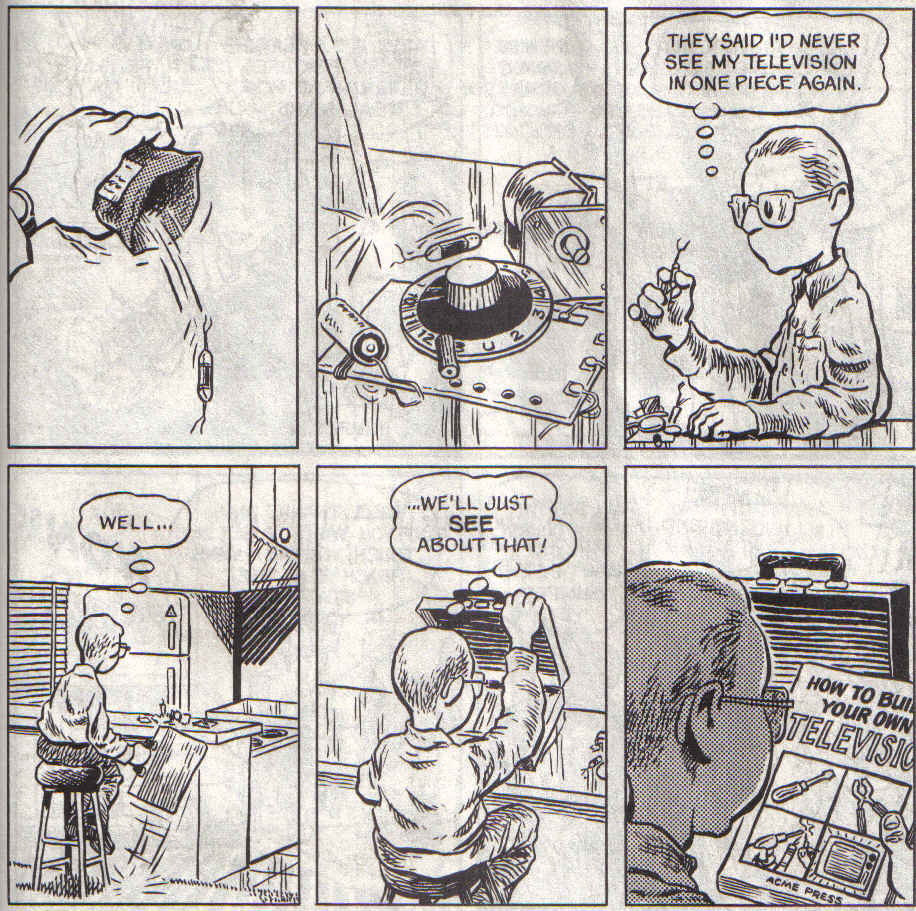 Jamey’s going to be picking at those parts for some time. Two other characters in the apartment complex try to picket against the owner because of the substandard quality of the place. They get picked up by police on a trumped up charge, yet Regina uses it as an opportunity to make a date with her arresting officer. Jamey becomes frustrated with rebuilding his lost set and continues to lose sleep becoming more agitated in the process.

Meanwhile, one of our robber children meets with his friend Scotty, who is now working the paper route to Jamey’s building. Scotty thanks the other boy, Lee, because he got the job when Lee left to his current life of crime. And so the next morning we come to a vicious kind of full circle as Scotty is delivering the morning paper outside a mentally unstable Jamey. 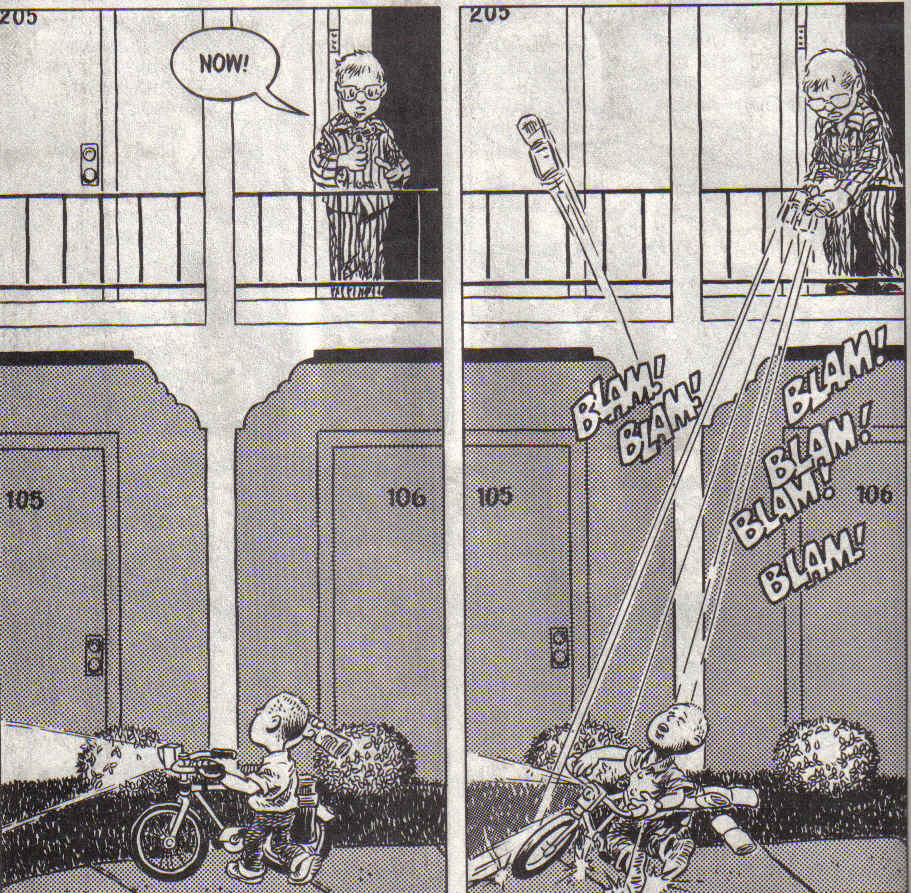 I can say that this scene didn’t seem overly violent when I first read the book. It’s sad but not a particularly likely an occurrence. Or maybe it’s an all too likely occurrence in our modern day world and I’ve become a bit jaded. But it’s the next few pages that really give it impact. Jamey is completely meek after being taken in, apologizing for waking anyone up. It’s clear he’s completely lost it. This however get me right in the gut.

Shit! The character wasn’t even alive for 6 freaking panels and I’m tearing up here. It’s all in presentation and careful plotting. Push the right buttons and you’ll have the audience eating out of your hand. And Doug Potter is clearly a good button-pusher. Not all things end badly in Deep City. 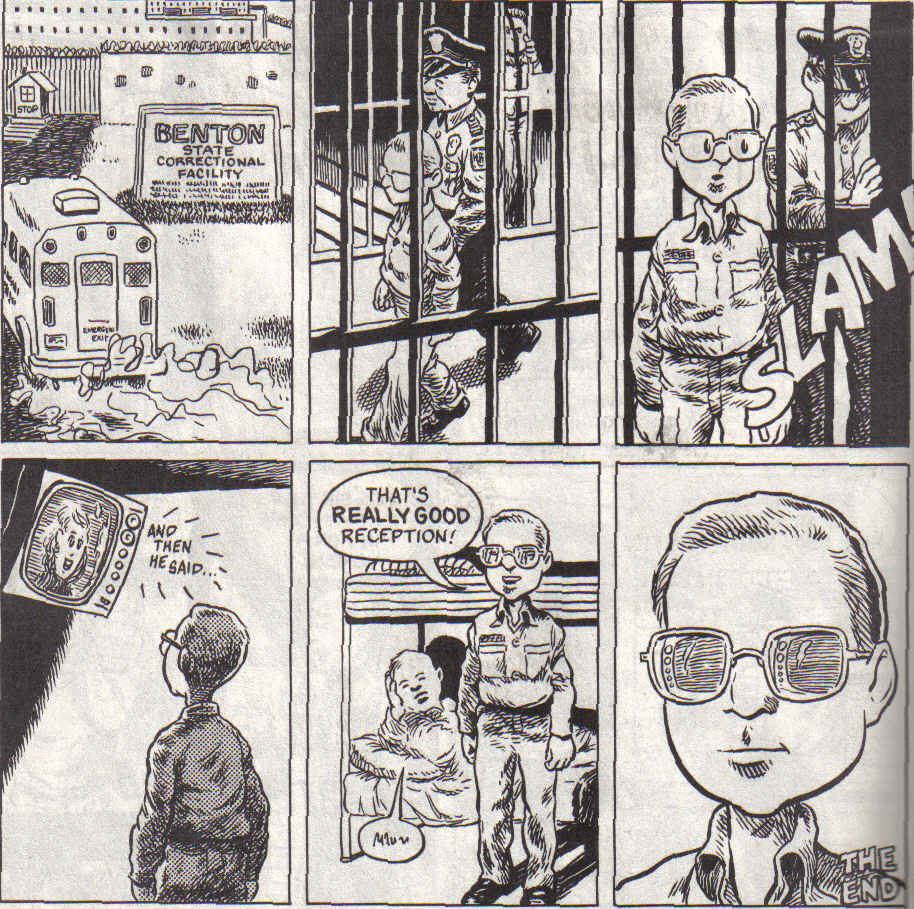 And with that bit of odd, screwed up justice, I take my leave of those streets and gladly head back to my own.

Posted by SonOfCthulhu at 3:09 AM