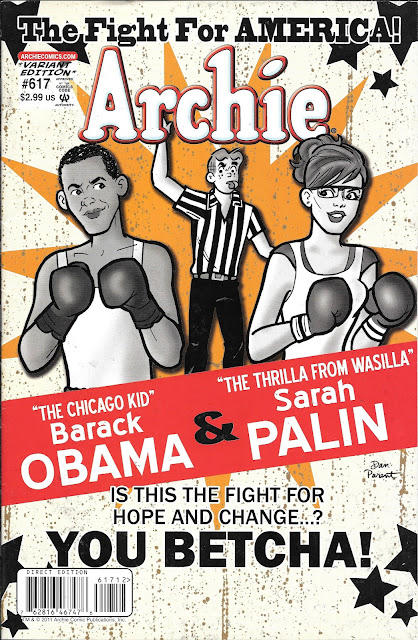 Only in the Archie-verse could Palin and Obama come together

Election time is almost upon us so settle in, for the conclusion of President Barack Obama meets Sarah Palin in part two of this Archie comic.

We begin where we left off last time after a brief one page recap. And that place is with both candidates arriving in Riverdale to confront our teens, but bumping into each other instead. For a moment, it seems they are thinking the other is responsible for this mess. 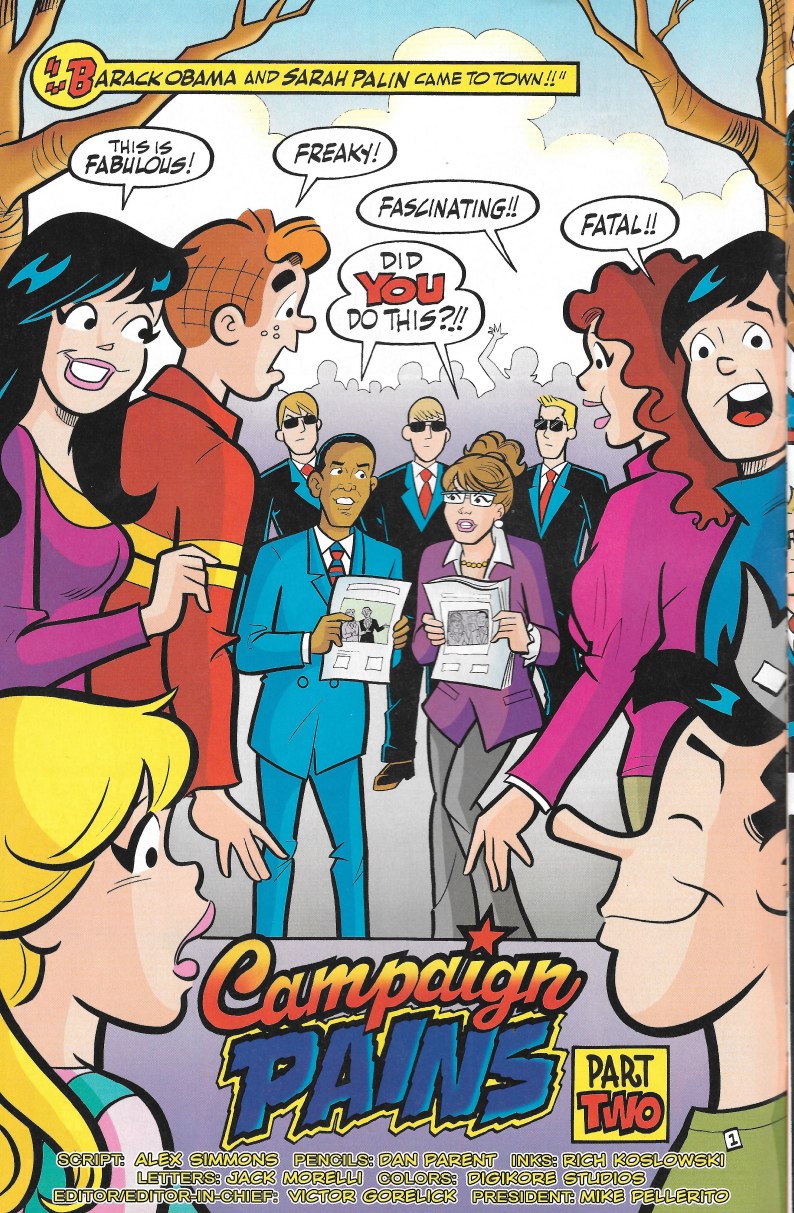 Neither of them being that slow on the uptake, leads them to quickly determine the other isn't to blame. 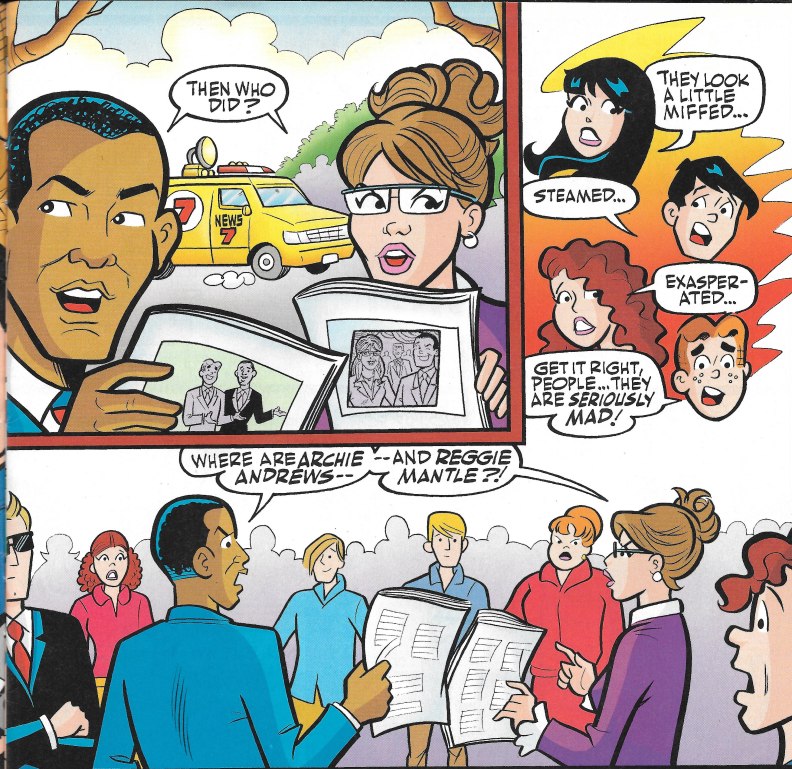 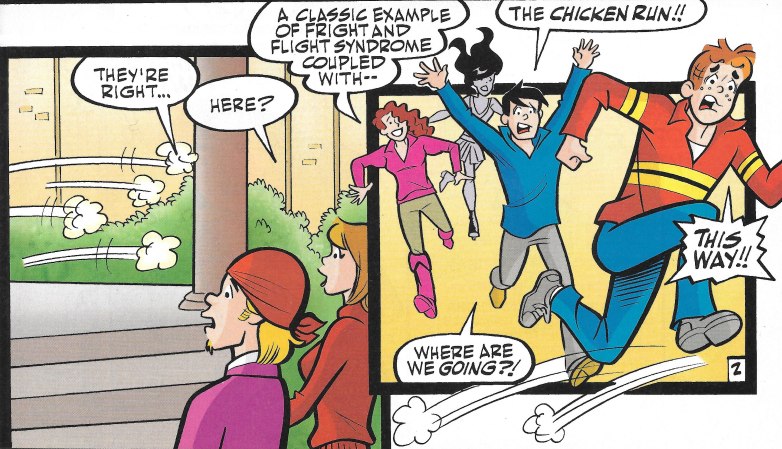 …especially when they disappear instead of facing the charges being levied against them. It feels like an "insert Scooby Doo chase scene" moment, but it only lasts a panel. Then they hole up in a back classroom to wait out the ruckus. Veronica pins hopes that Mr. Weatherbee will set things to right. 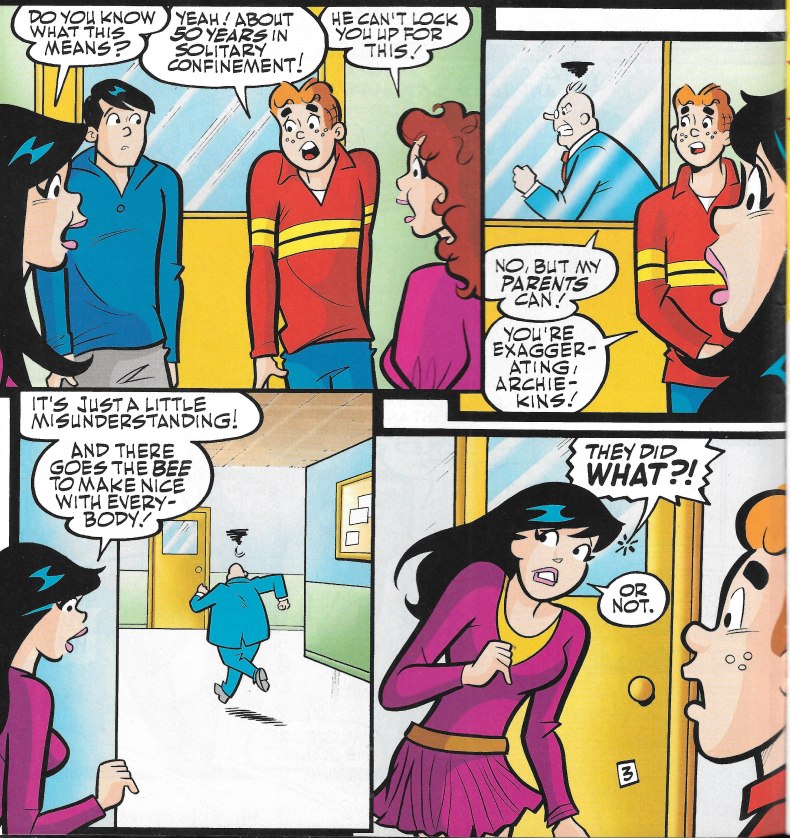 However she is quickly proven wrong. As are the politicians outside trying to clear things up on who or what they endorse. I admit that really all this amounts to is clever wordplay, but I found some of it made me smile so I'm giving it all a pass. Jebus, don't make me start liking Archie, Crapbox. What a shameful thing to be guilty of. 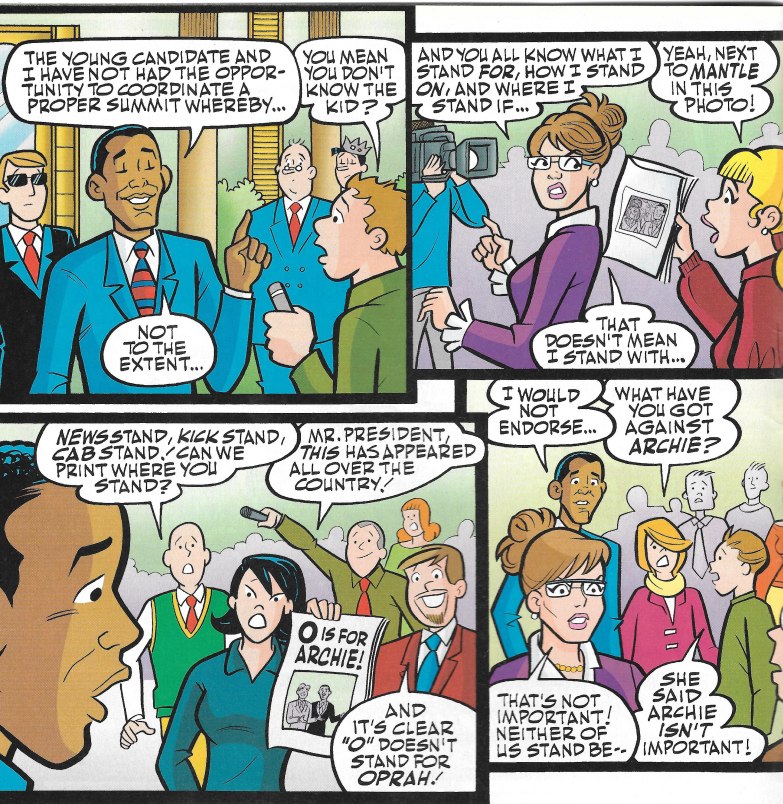 As the kids learn that Veronica's dad isn't going to buy their way out of this, the politicians finally stop getting into deeper doo-doo…

…and come together on the real issue. 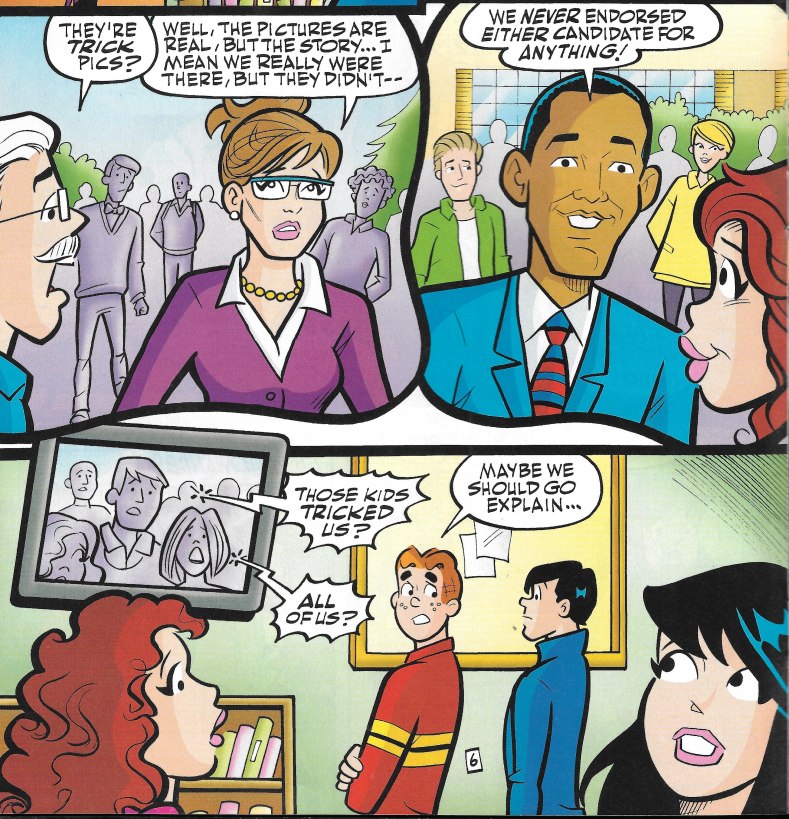 Which means the gang is exposed. That should be fine though. It's not like the town is going to form into a bloodthirsty mob and... 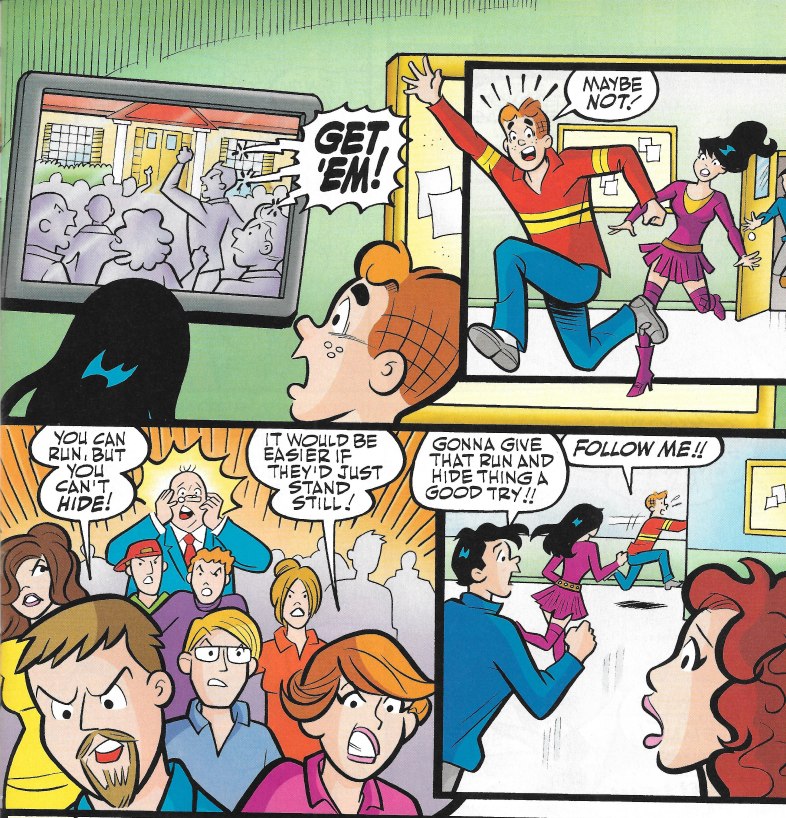 …chase after them? Really? Okay, Archie-verse. You really hold your individuals to an extremely high level of honesty and truthfulness. I'm amazed you didn't kill Obama and Palin on sight given this attitude. NO politician is a pillar of virtue. 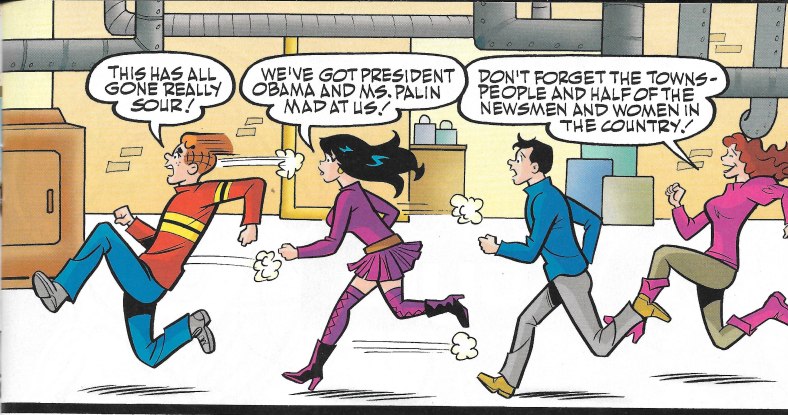 While Palin and Obama find notes in their cars for a private meet up to explain the situation, the kids are beating feet. And while they do, this shadowy character (possibly eating a hamburger and wearing an odd crown-shaped hat) meets with the President and Ms. Palin.

When we do make it back to the kids, Veronica has went to go talk sense into her Father, Reggie and Trula head for the hills on his motorbike, and Archie makes off on his own to hide out. His choice of hideouts is Pop's, of course and that's where he bumps into …. 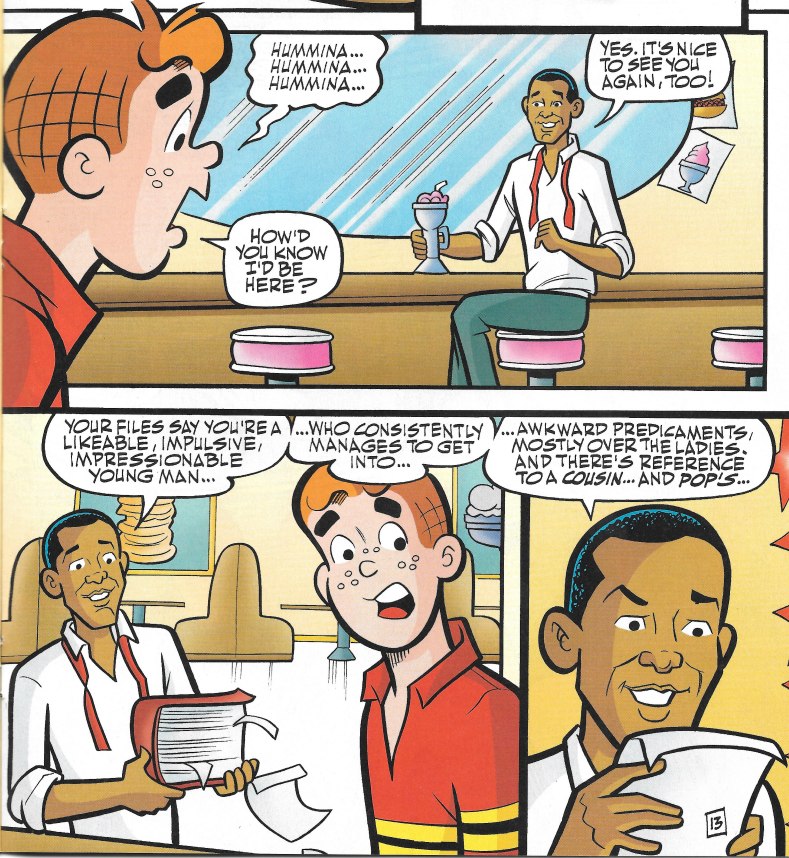 Which leads to the inevitable questions about what happened, to which Archie (being Archie) answers truthfully. 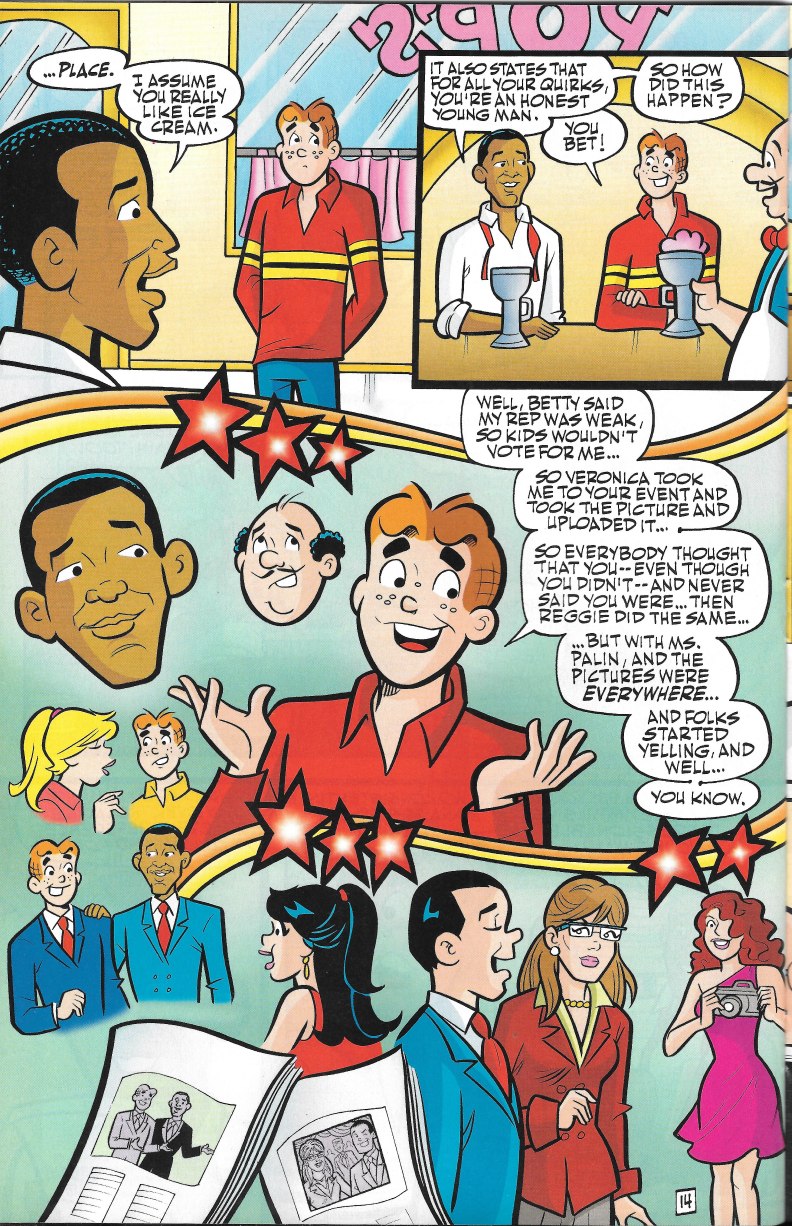 The conclusion of which is that the mess didn’t start out Archie's fault. 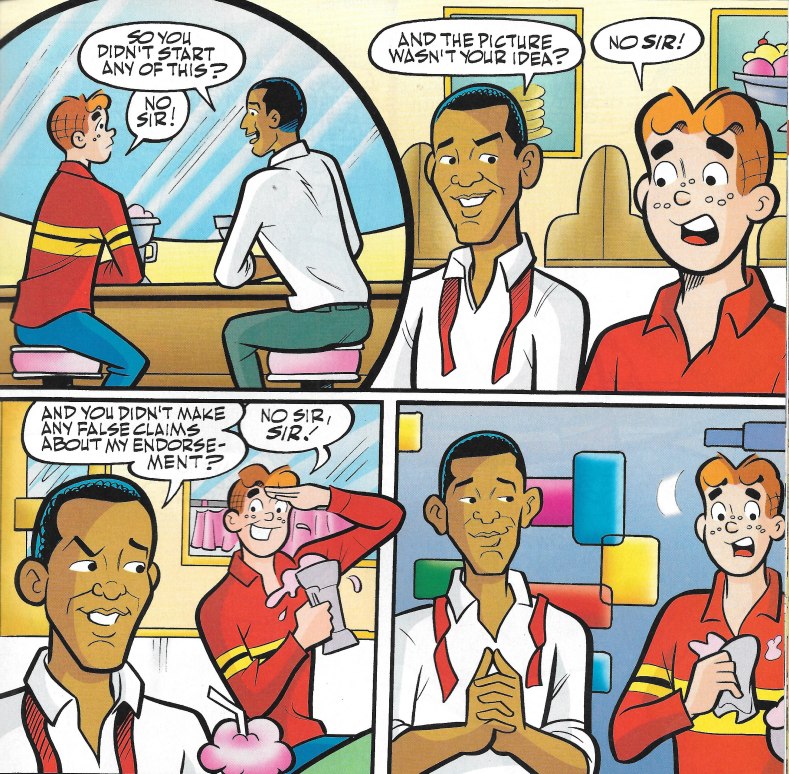 …but due to his negligence, it has become his responsibility. 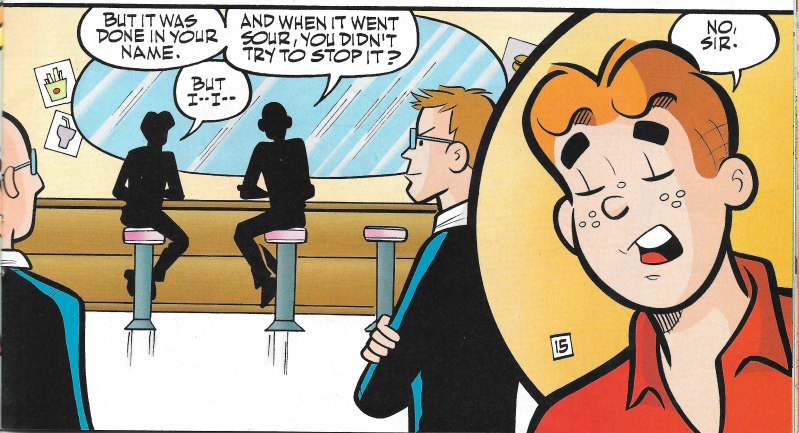 There a good lesson here and I kind of get that the book does these things regularly. I just want to tell it to stop getting me to like it.

Meanwhile Palin corners Reggie and Trula, if arriving at their off road motorcycle ride's destination before them can be considered cornering them.

After a bit about HOW she found them, Reggie lies about what happened. 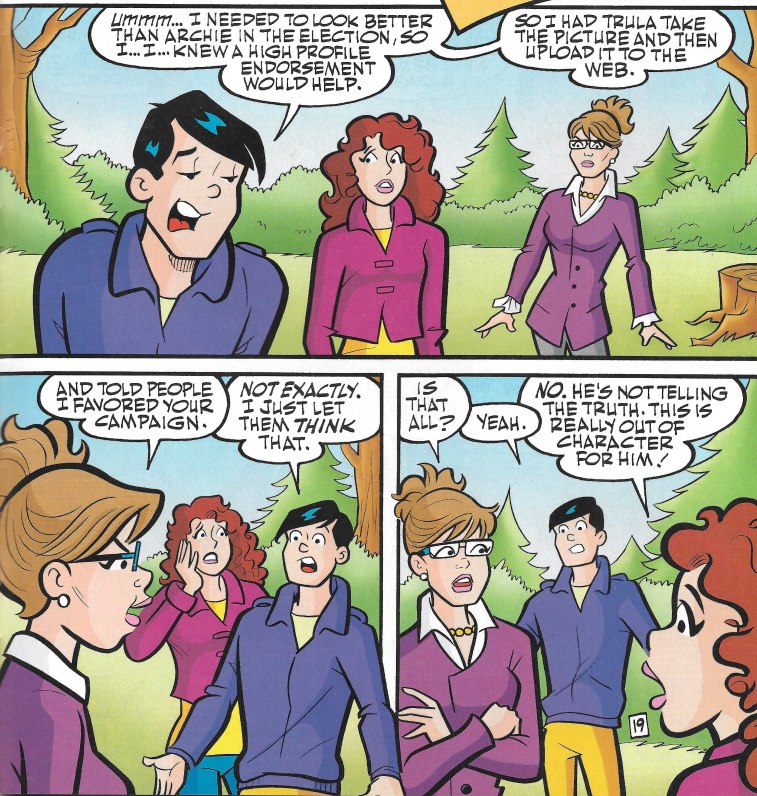 Which is totally IN character for Reggie. Except Trula brings up an important point about his lie. 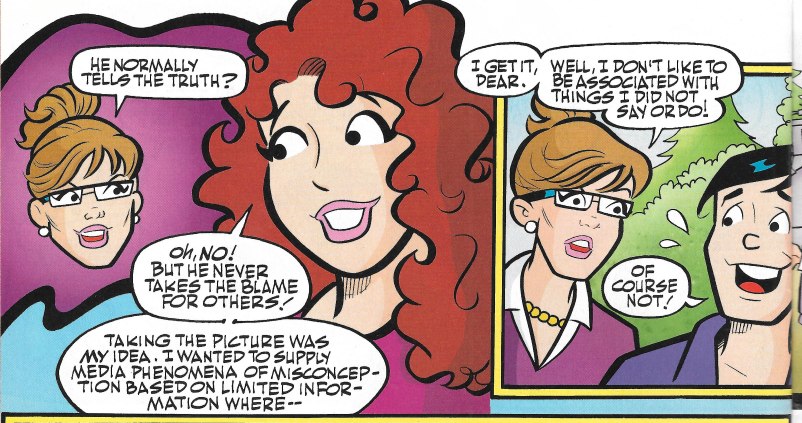 And yeah, you can go "aww" now. Reggie is a "heel with a heart of gold." Or something similar. But the gang isn't in the clear just yet. 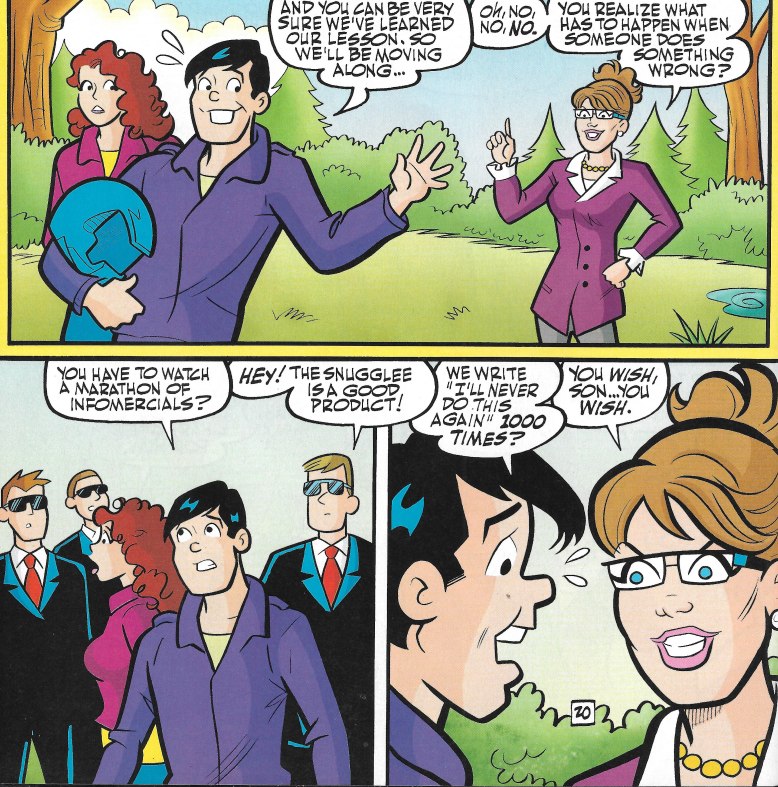 There IS a punishment coming, but it justly fits the crime. 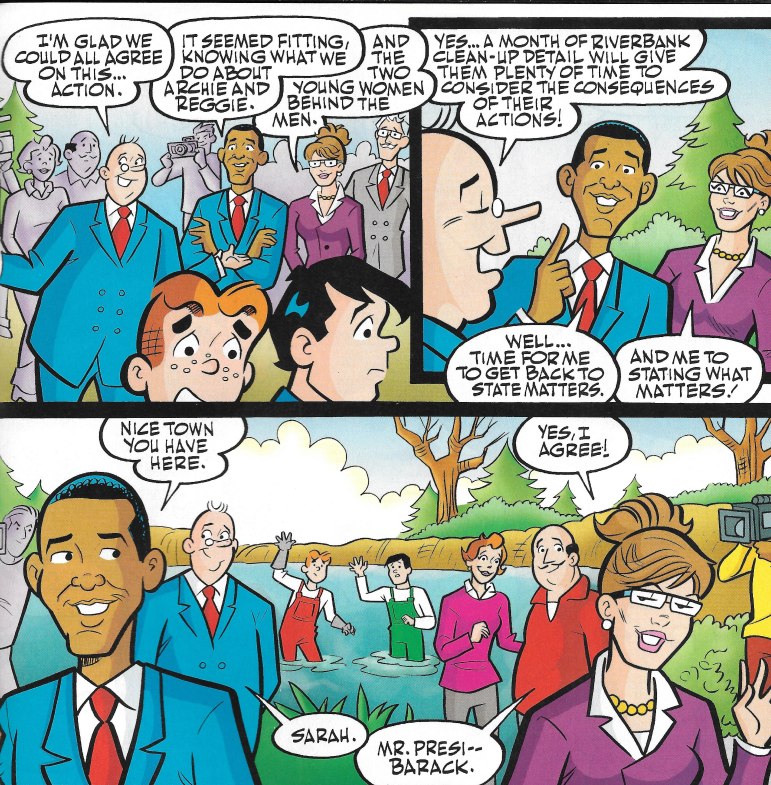 Neither boy gets to be class president and the river gets some much needed attention. As for our politicians, they can agree on one thing it seems.

With tomorrow being Election Day in the good ole U.S. of A., the Crapbox would like to urge all of our readers to get out there and VOTE! Democracy only works if you do the work! So go Vote tomorrow. Or if you already have, Thank you!
Posted by SonOfCthulhu at 9:45 PM