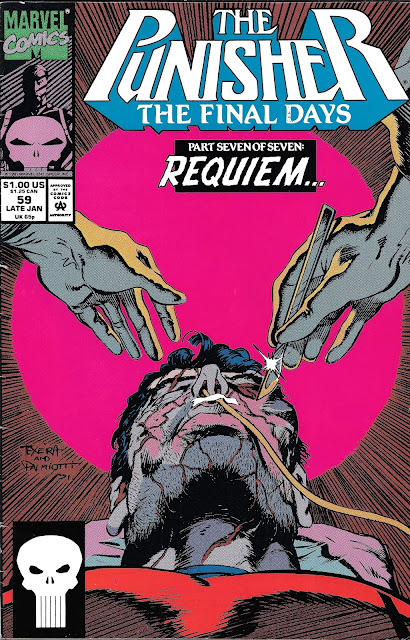 There was a moment when Arthur Herbert “The Fonz” Fonzarelli was the coolest person on planet Earth.

Tough. Manly. Italian. Street but with a sensitive side that he’d break your balls if you mentioned to anyone. Fonzie pretty much defined the bad boy slick persona most of us wanted to be when growing up. He knew all the codes of manhood. He got all the women to love him with the snap of his fingers. He had an awesome catch phrase. He was the best part of Happy Days.

Fonzi made an unforgettable and fatal mistake.

He jumped the shark. As in with a motorcycle. He physically rode skis pulled by a motorcycle up a ramp and flew over a shark tank in an effort to prove how badass he was.

Like that, *snap* he was over. You don’t pull ludicrous stunts to prove you are cool. If you need to prove it, you aren’t.

It also had a dual connotation in that the show had created such a contrived and convoluted storyline that it shattered the bounds of credibility and had lost sight of its core audience. Wiki states this is usually a result of writers being unable to maintain a standard of quality indefinitely.

Punisher #59 would agree with that. The Final Days storyline was finally wrapping up and Frank Castle looked about ready to punch the clock one final time. He had escaped from prison but was gravely wounded by his old nemesis Jigsaw. As payment for scarring the killer’s face, Jigsaw has done the same to Castle. And now the Kingpin had found out Frank’s location and sent everything he had against him.

This is where we end this story arc and lay the groundwork for the next, and had they killed Frank here or even taken him off the grid for a bit, things might have worked out. Instead, they went a different route.

And not the good kind of crazy, either. Let’s fall face first into this one, as Mike Baron bows out the series and leaves a steaming pile for the next guy to deal with. But first a bit showing where on the grid we find ourselves. 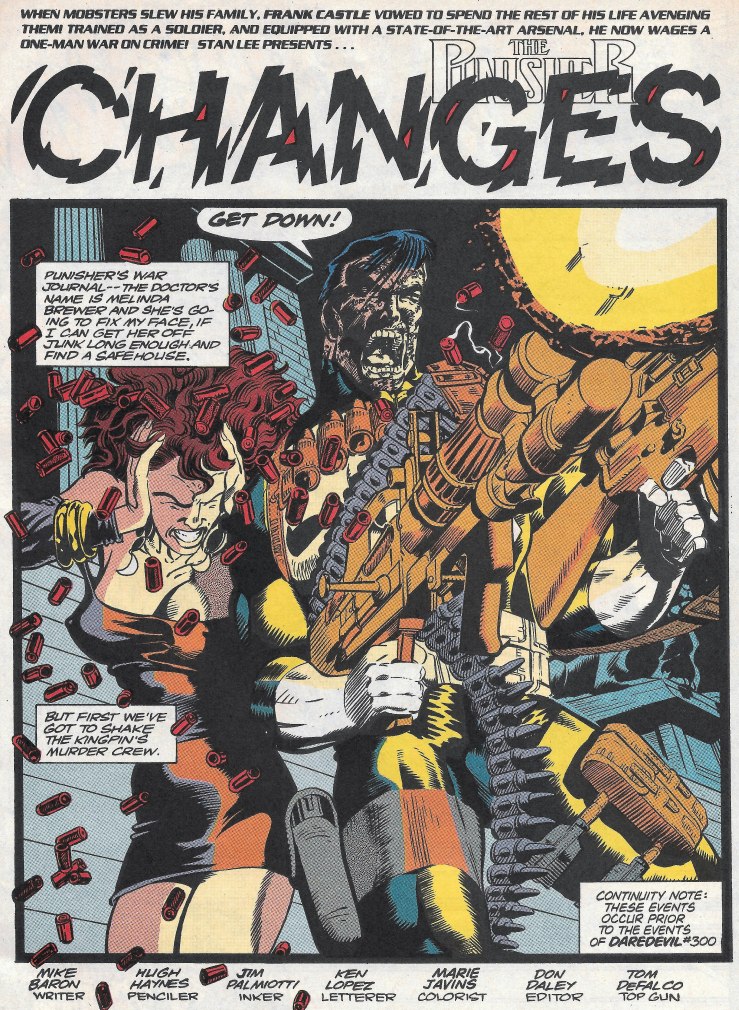 This is our opening page: Frank being Frank and shooting guns as only Frank can. Behind him is the beautiful but skanky-looking Dr. Melinda Brewer, a plastic surgeon Frank has forced to quit being a junkie so she can fix his torn-up face. And on the other end of that rain of shells are a few bad guys sent by Kingpin. 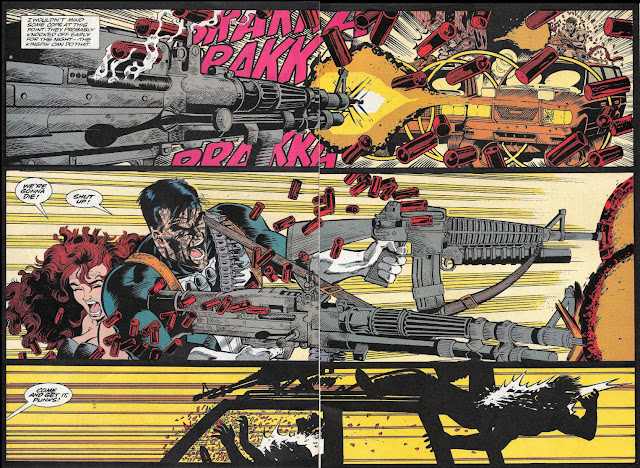 Lap up the action, boys. There won’t be much here. We will allow Messrs. Haynes and Palmiotti some indulgences here with the next two page splash of violence, although you might want to clap your hands over your ears due to it having enough speed lines to break the sound barrier. The noise you hear might be your eardrums blowing.

Which is a shame as that might cause you to miss this burn on the following page. And I don’t mean the explosion. 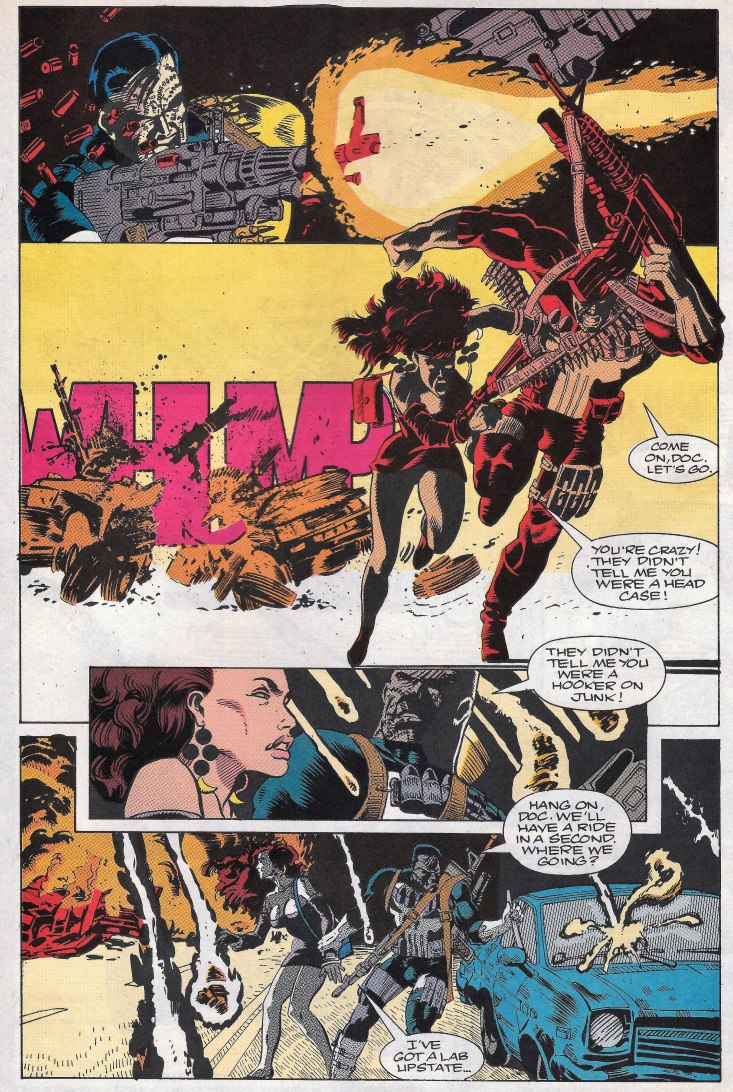 Sniping aside, Frank hands over the wheel to our junkie/doctor, which shows he really is in no shape to do anything and won’t be for the rest of our issue. It’s enough stress to make you start doing drugs again…but we certainly hope not. 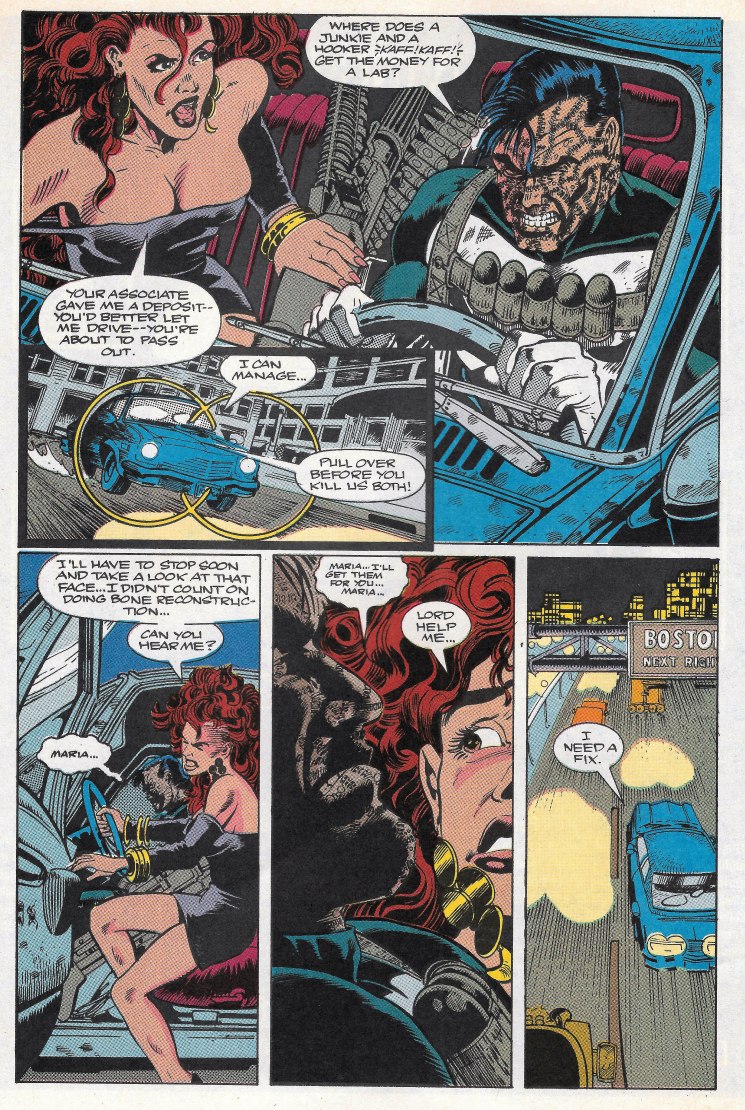 Now, the fat man that sent all those guys killed at the beginning of this issue and most of last isn’t in a very happy mood. He takes all of his frustration out on one Mr. Deems, who was apparently in charge of the band of killers. 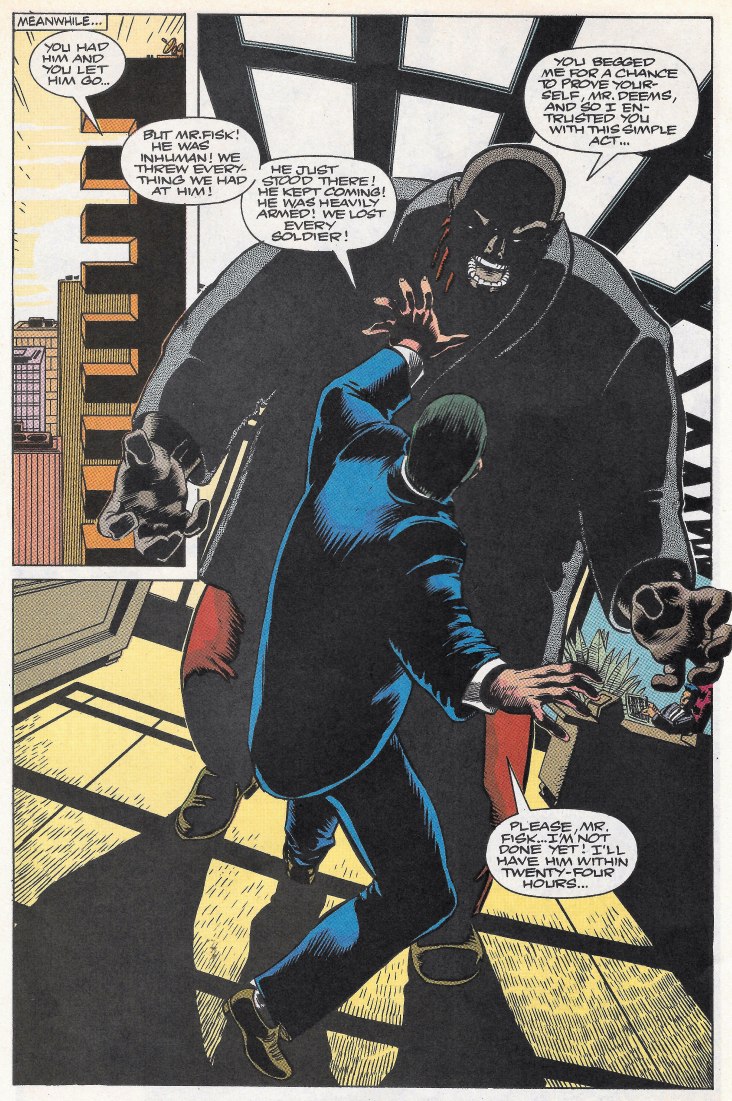 And by that, I mean he drops him down an air shaft to his death. 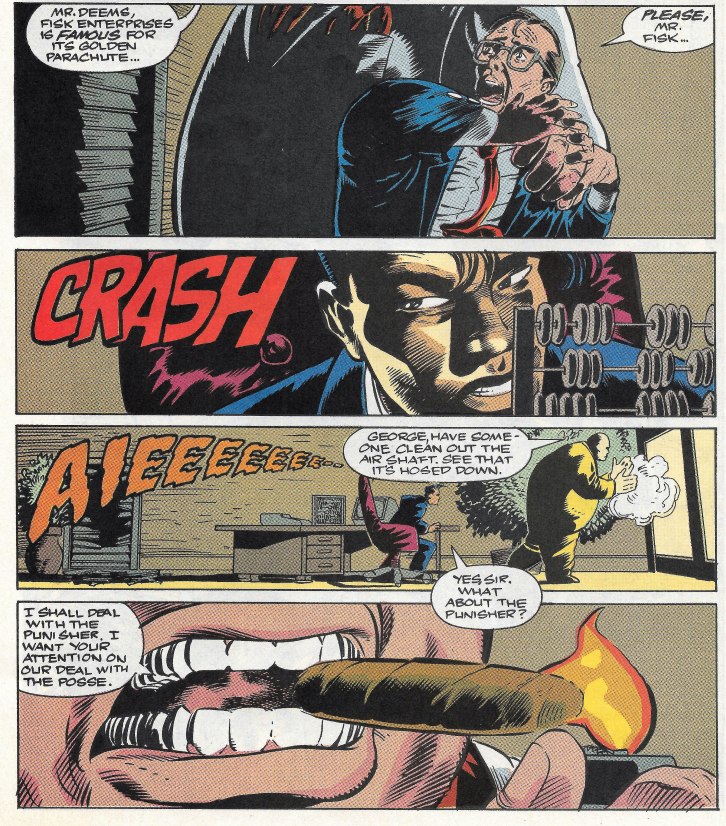 An event that is noted by a much more svelte Microchip hanging out in a building across the street. This story arc had ‘chip in the Kingpin’s clammy mitts back five issues ago, so I have no idea how he got free or lost all those pounds, but I’m glad he’s okay. He plays a bum in just a bit and affixes a transmitter to Mr. Tam’s car. Sure this will pay off later. 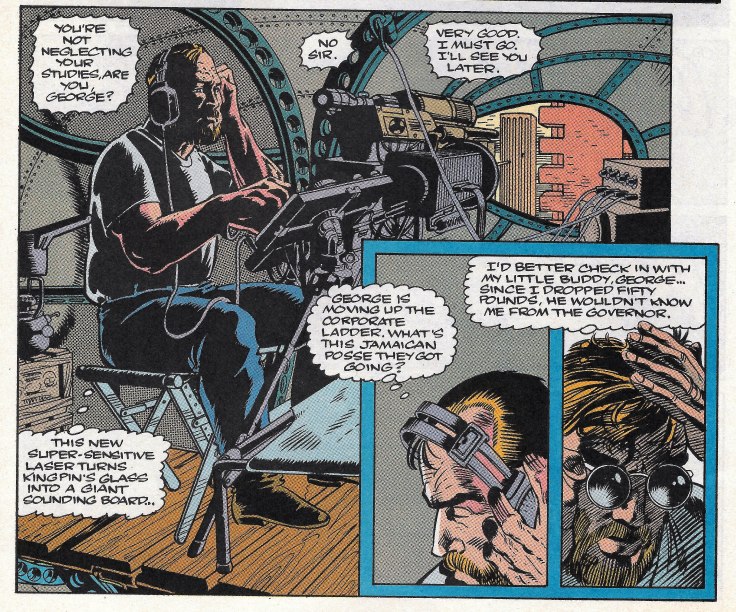 While all that transpires, Frank and Dr. Brewer arrive at her hidden lab. Before exiting the car and the rest of this issue, Frank has one final request of the good doctor…he wants her to “change” his face so people won’t recognize him. 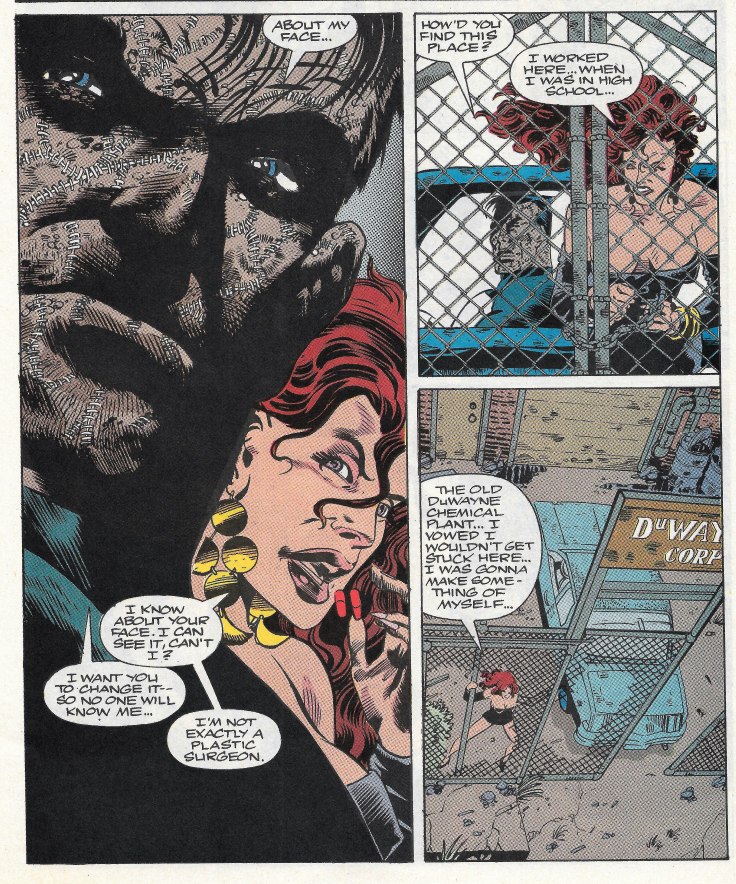 We’ll see how that little notion comes back to bite him in the end. 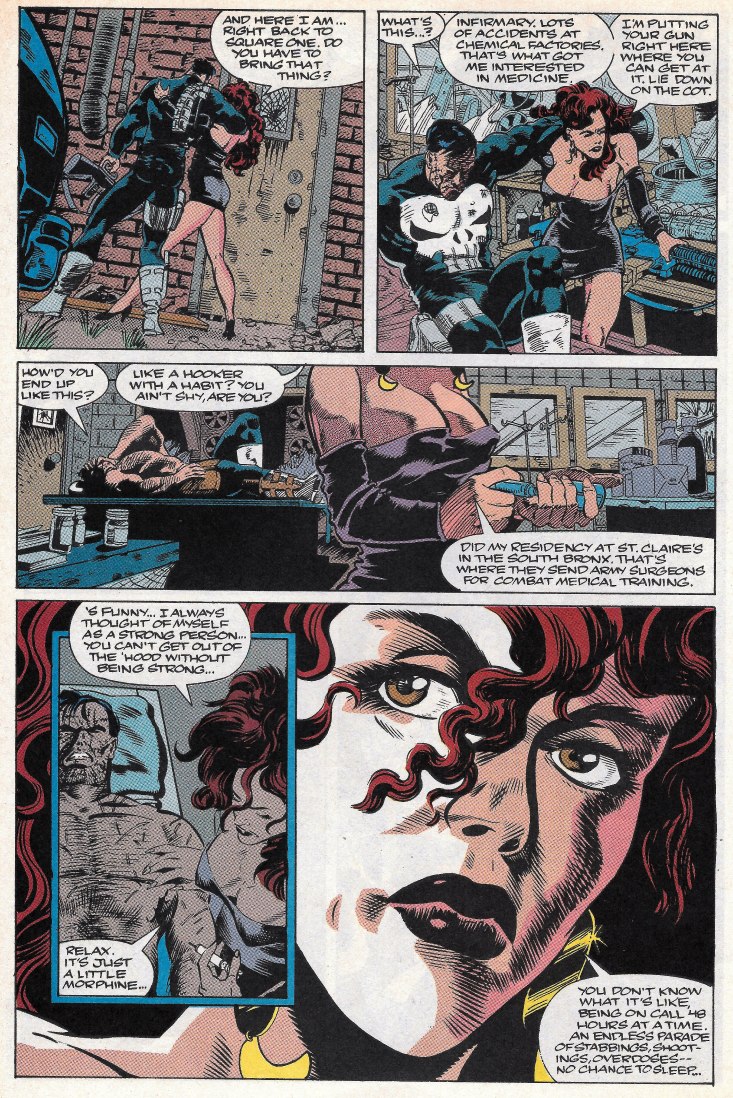 Dr. Brewer struggles getting Frank into her makeshift ER / drug lab and tells him how she became a junkie hooker while shooting him up with morphine to ease his pain. Basically, she was working too many shifts and the drugs to keep her going were just sitting right there…

After bearing her soul to Frank, he laughs as if he’s in on Mike Barron’s joke. The Punisher is going to let a junkie perform operations on him to save his life and fix his torn-up face, which isn’t the REAL joke that’s coming. Dr. Brewer drops a hint here if you pay close attention. 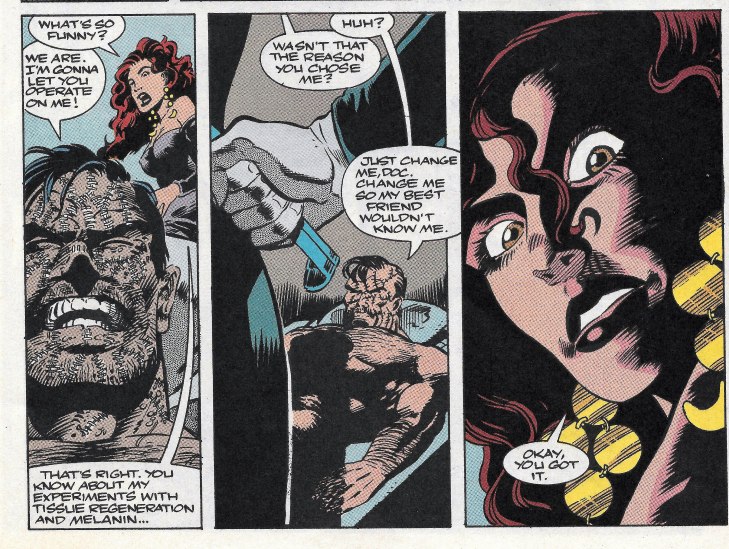 Yeah, Frank you’re going to get it. And so are we as the audience.

Next, we get Frank dreaming of Maria, remembering saying goodbye to her before shipping out. As that scene fades to black, a much uglier scene occurs in the bargain basement operating room. Two thugs show up demanding drugs. 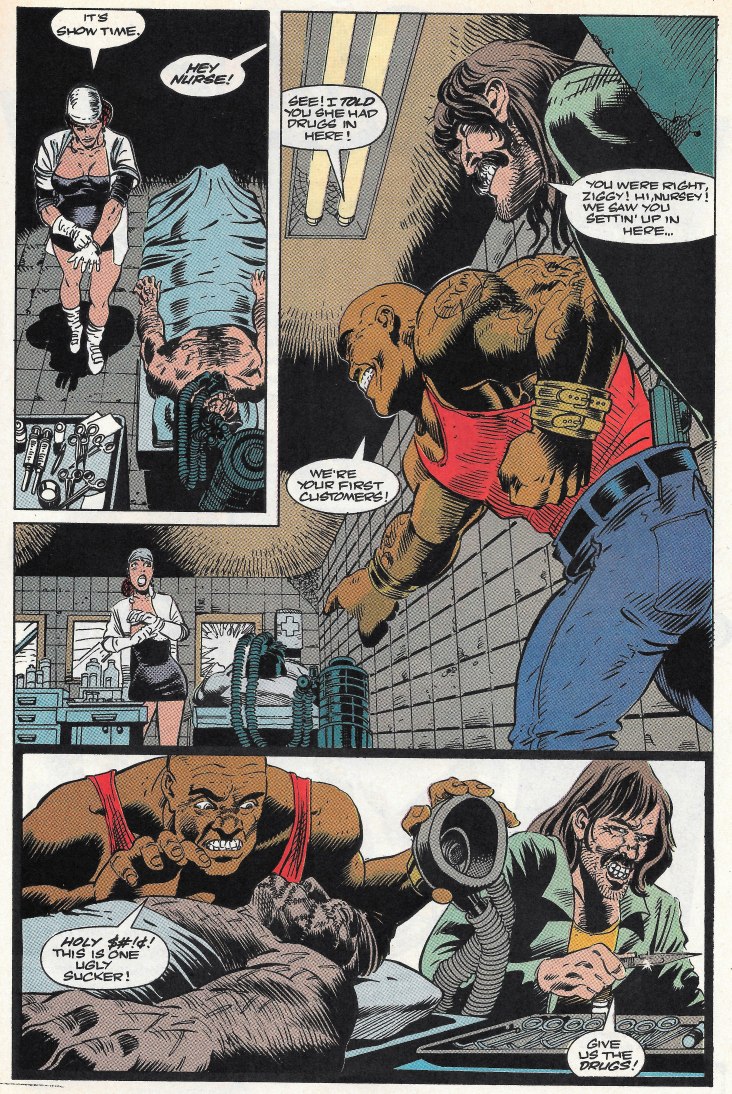 Shouldn’t Dr. Brewer change into something a little less skimpy to operate in? Just something I noticed. 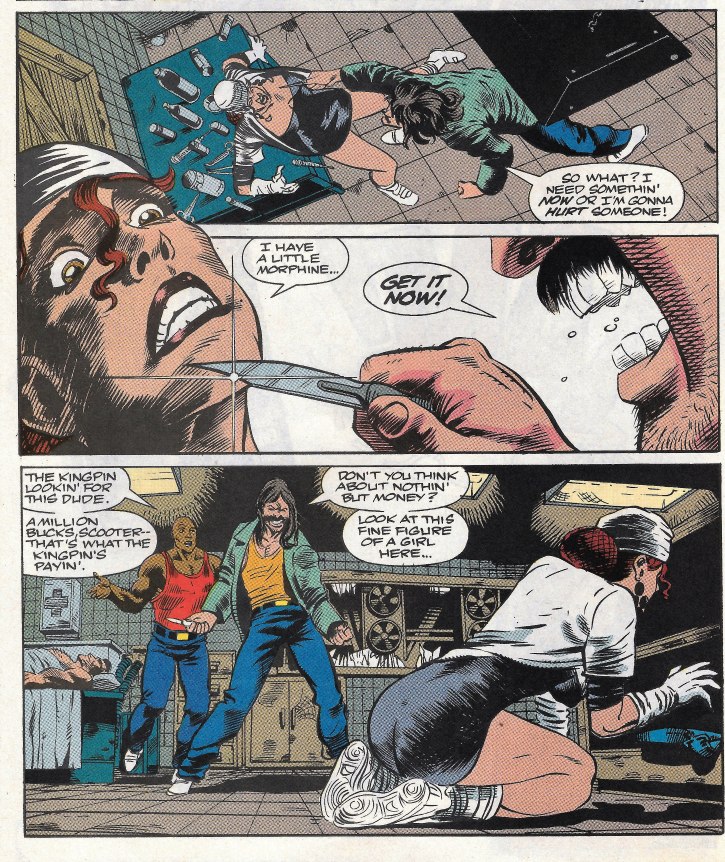 The street toughs finally recognize that’s the Punisher under all those wounds but only one of them cares. The other is hurting for a fix so bad he physically threatens Dr. Brewer. She goes to get the morphine from under a table… 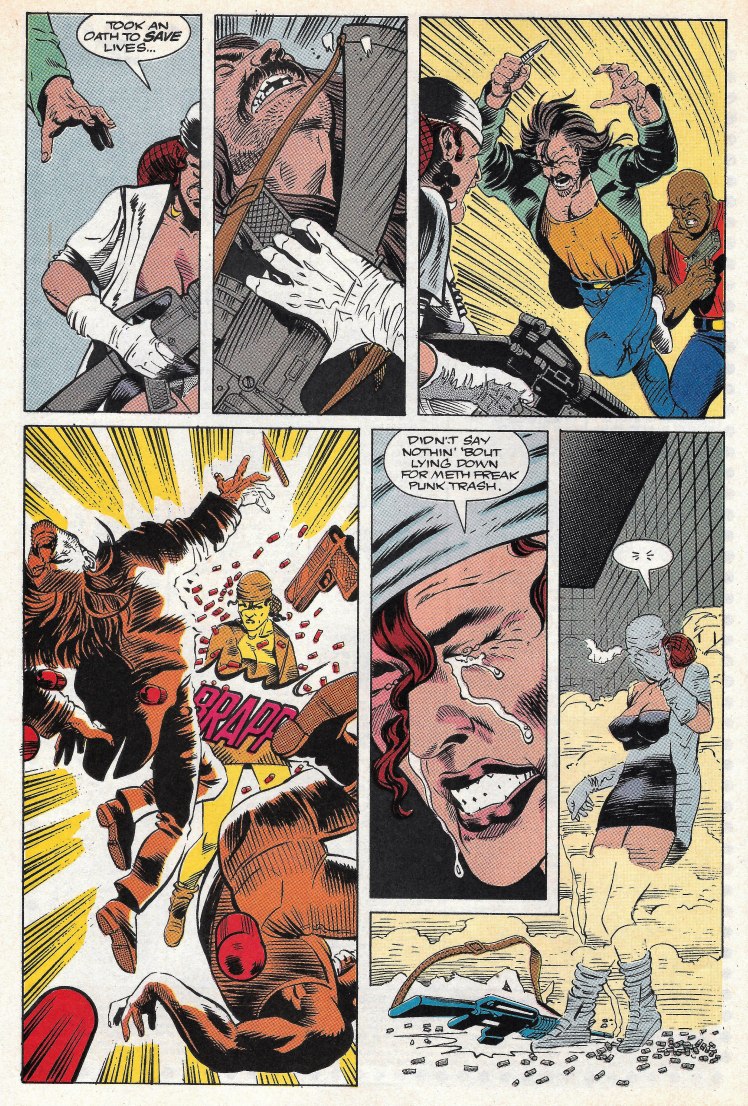 …and comes out with an automatic rifle, mowing down both of the mouthy punks.

Then she cries about it. Cause she’s a girl and stuff. Whatever.

After clearing the operating room of all the dead bodies…this is beginning to sound almost like a Frankenstein movie…she sets to work on Frank. Midway through she gets the shakes though... 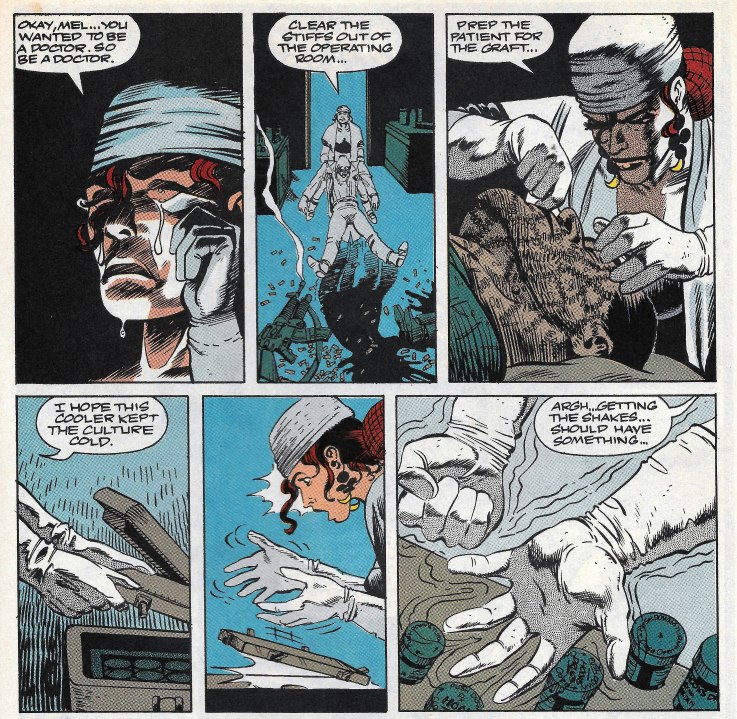 …which leads to a scene of her opening a bottle of pills and then saying “No” and tossing them away. Frank, meanwhile is lost in his green morphine dreams, this time as Maria gets killed and he is chased by a giant Kingpin 30 feet tall and menaced by Jigsaw and other tough guys.

He awakes five days later with his face in bandages and Dr. Brewer standing over him. She said she kept him out to give the graft time to take. 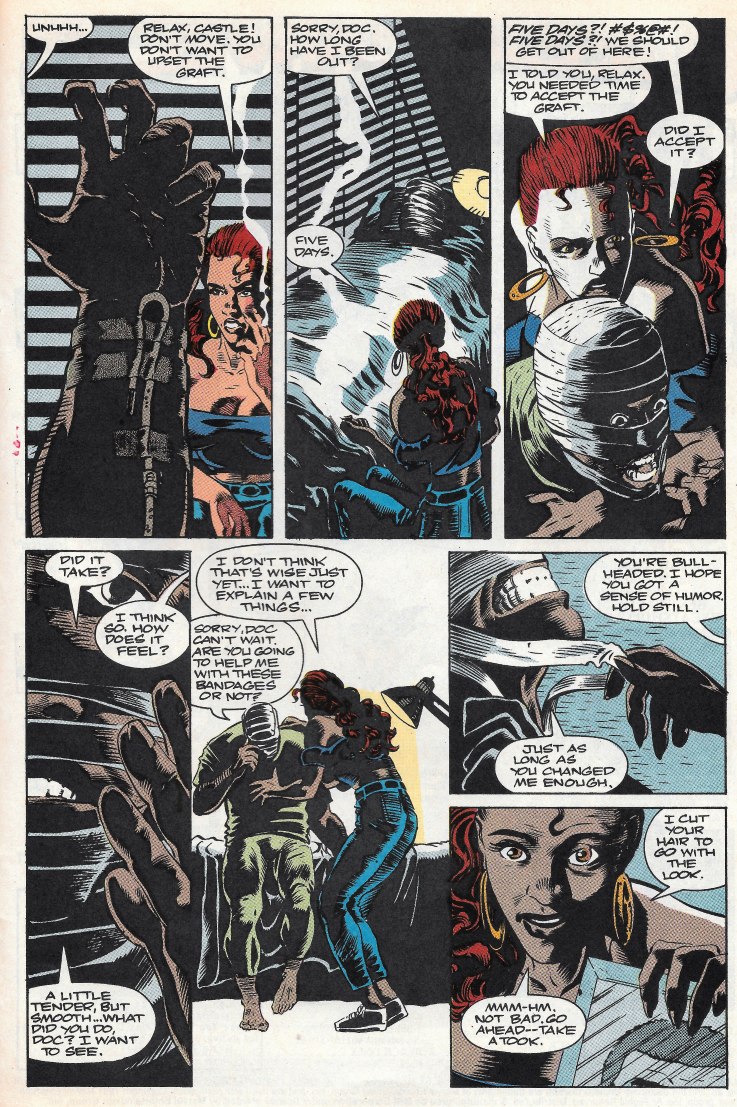 Frank impatiently asks her to remove the bandages only to discover... 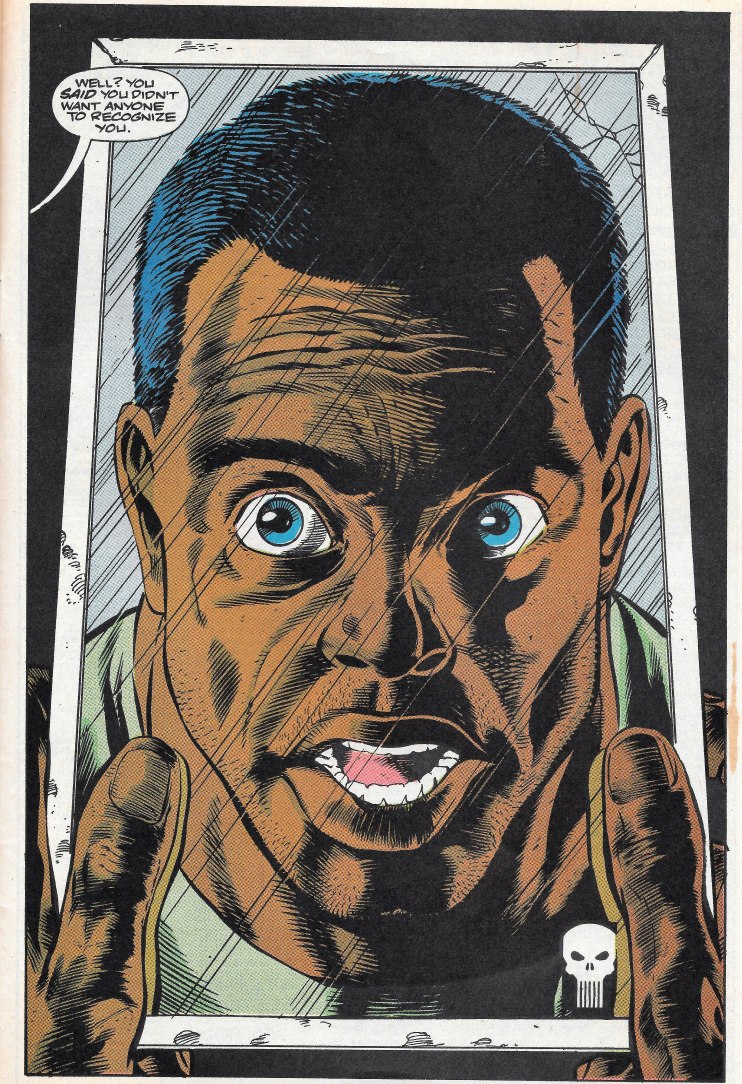 And somewhere Fonzie flies over a great white while riding water skis and being pulled by a motorcycle.

Yes, they changed the Punisher into a black guy. I’m not saying anything more. We will talk about what just happened when we get to Punisher #60 and meet Frank’s special guest star.
Posted by SonOfCthulhu at 3:16 AM