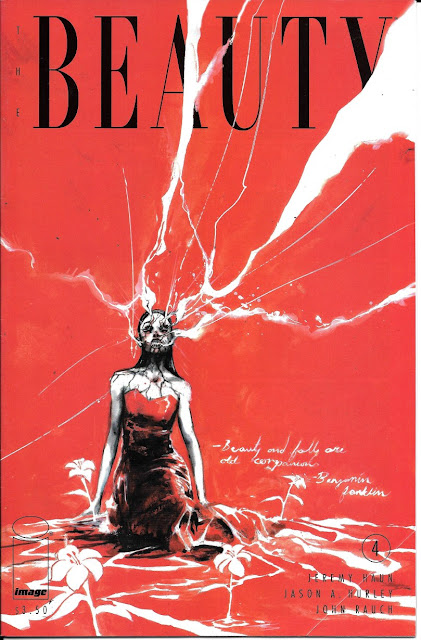 Definitely one of the better story ideas to end up here

I always play 'em where they land. In this case, I landed four issues in on a book called "The Beauty," a pleasant, if non-descript little book that I gave the shortest of glances at before moving on to the next discount bin find.

That was a mistake.

Good things sometimes come in plain packages. What we have here is one heck of an idea wrapped up in a conspiracy tale. Jeremy Haun and Jason A. Hurley take credit for the story idea and words, with Haun doing the art chores as well.

And while I keep saying "plain" to describe the art, the reason is not that it isn't competent or perfectly fitting to the storyline, it's that there is very little flash or pop to it. There's not capes or future cities or mythic landscapes. There's just people. Lots of pretty, clean-skinned people. So deceptively simple.

I'm going to admit to going in completely cold on this one, so I missed the entire thread of this tale. Jumping in at number 4 without any info as to what had gone before or the setup of this intriguing world was a mistake. A mistake that made it necessary to re-read the entire thing after a quick glance at the letters page unveiled what made this tale so special.

The Beauty is the story of a world where a sexually transmitted disease exists with the side effect that if infected you become beautiful.

Simple concept and an intriguing idea. The disease appears to act like herpes and once caught, you'll have it for life. It will melt away fat, smooth your skin, improve your appearance until you are flawlessly perfect. The only known symptom of the disease is a mild fever. More on that in a bit.

In the world of The Beauty, half the population of the country has contracted the contagion. The other half remain ugly or normal or perhaps naturally pretty, but the implication is clear: people are willing to undergo a constant mild discomfort to be attractive.

That's really not news, but what is shocking is the method of transference and the inference that we are so narcissistic a culture that half of us would rather risk our health than to appear ugly. It is telling in how easy it is to accept the idea that half the population would be infected. How is never discussed, but you can assume a couple of things. Either the people infected chose to be with someone infected or they wanted to sleep with someone attractive. It is actually a bit surprising that the book doesn’t carry the idea farther to state that  everyone is infected. But it doesn't push that boundary and there must be reasons it only goes so far.

Sadly for everything there is a price, and for this beauty the price is clearly something fatal.

Oh, don't act surprised! You knew it would be something like that. The odd part is that there are elements in power in this society that want to keep that tidbit out of the press. And they will go to great lengths to do that.

We begin with a reminder of what is at stake here, as an artist at a one-man play recites lines about the price of attractiveness. Then he coughs. And afterwards someone in the audience succumbs to a coughing fit. 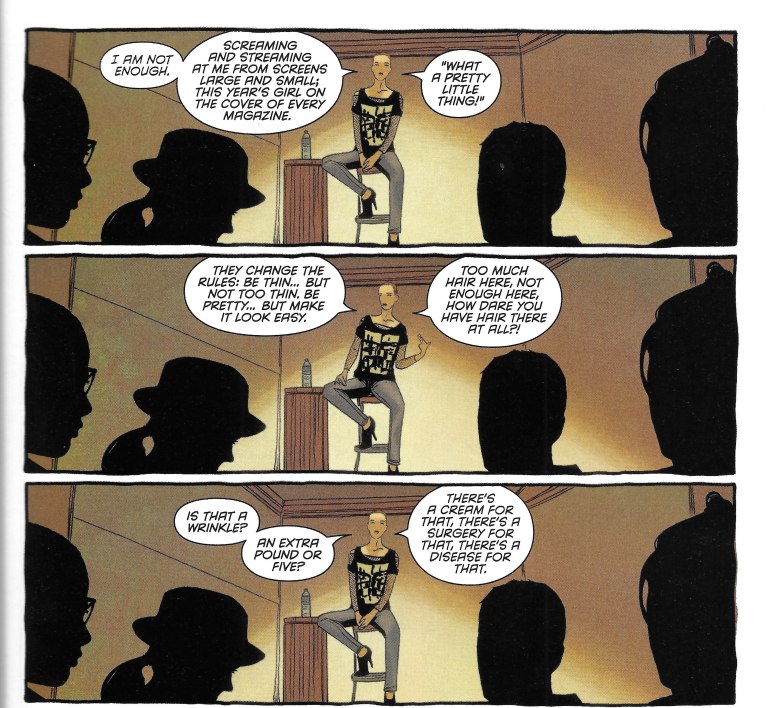 And by succumbs, I means his head explodes in a Scanners blood fountain. 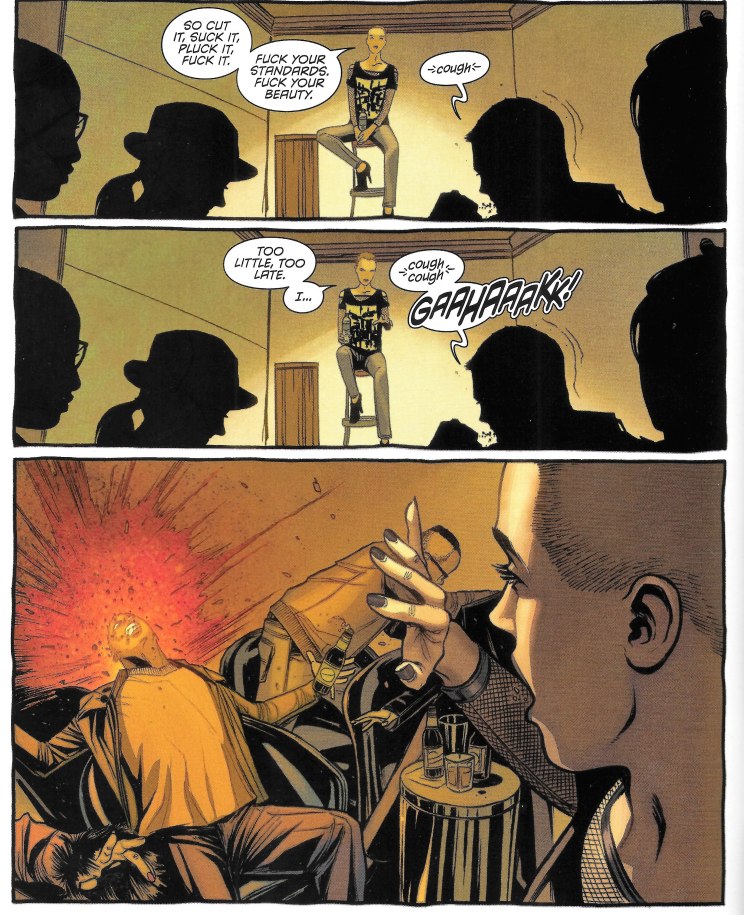 From there we quickly turn to two detectives waiting for some clandestine meeting with who knows who. The book is told without a bunch of narration, so it is very hard to tell context given this is my first run at these two. 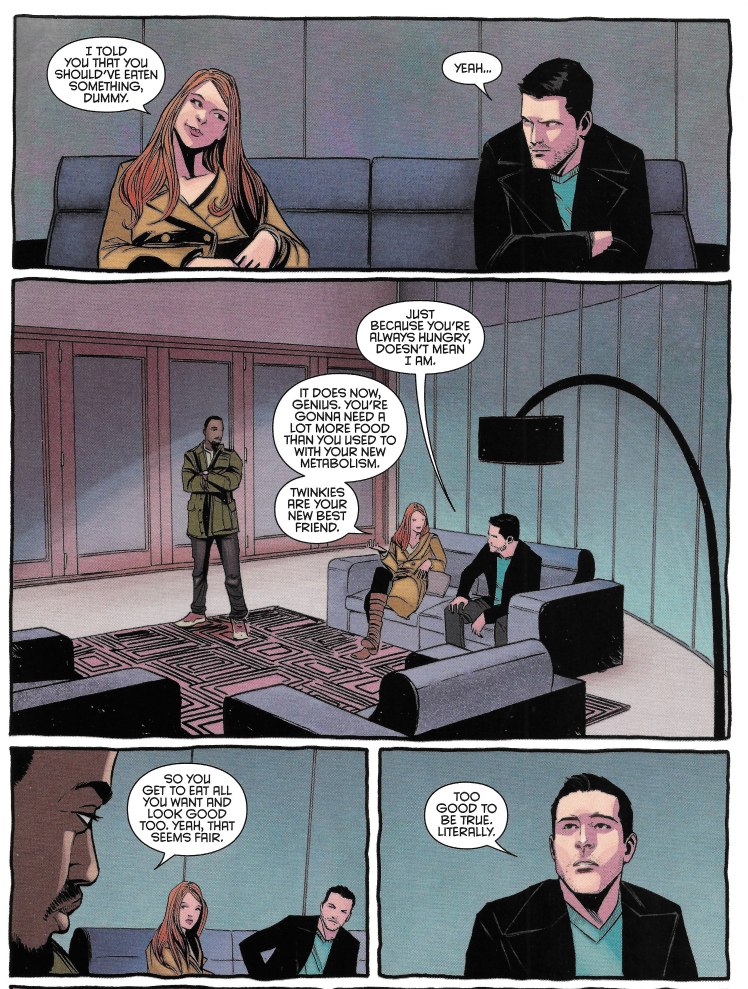 These are detectives Drew and Vaughn. Vaughn has just recently been infected with The Beauty and it appears to create an increase in your metabolic rate. We can infer that since Vaughn wasn't infected before that he had some reservation about the whole "harmlessness" of The Beauty. It is a fact he brings up to the man waiting with them in no uncertain terms.

In walks a group of four pretty professionals in business attire and they state they represent The Beauty community. We get no other explanation except that the leader's name is Jocelyn and she's a talk show host. What we do get is that they've worked with Vaughn Foster before and they noticed his new hunky looks. Vaughn appears to be uncomfortable with his new status. 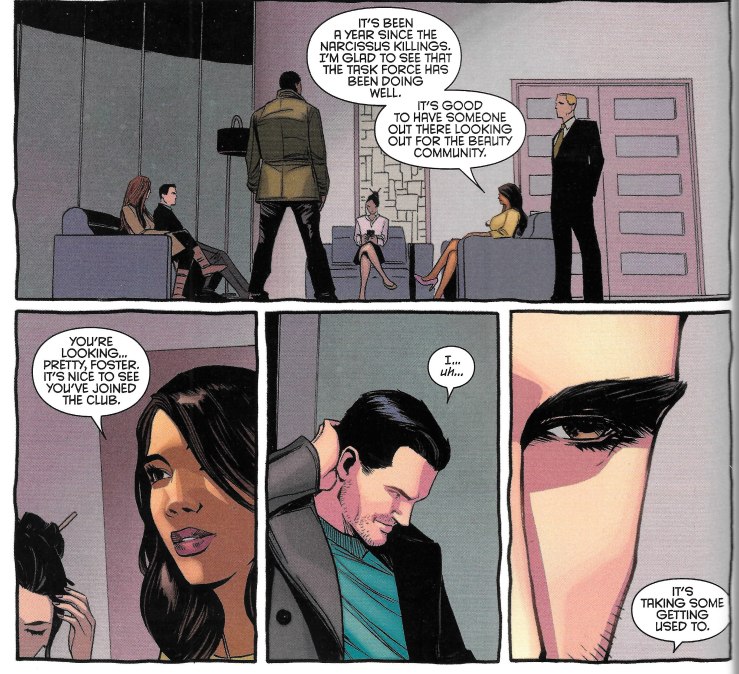 Drew is trying to get the word out that The Beauty isn't as harmless as everyone assumes and that her inquiry into cases is being blocked somehow. Jocelyn asks for a full accounting and while that happens (which is information I sorely need, but this issue doesn't recount) the scene shifts to a nice lesbian couple raising twin girls. 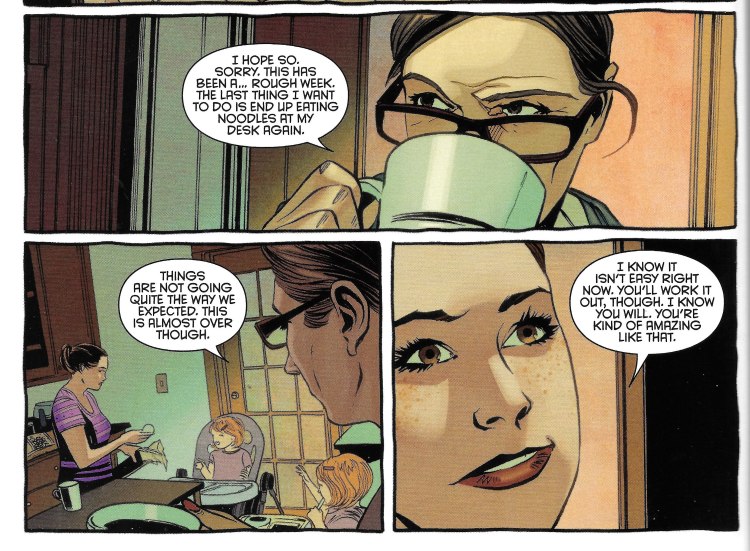 This young (and infected) lady drinking coffee represents yet another faction in this odd little suspense tale, but since the writers don't see fit to tell you where she plays in, I won't yet either. It is telling that they appear to be making an effort to humanize her in this, so I can only assume she's a bad guy that will turn good, or something.

So after that two page break we resume our conversation still in progress. I will admit to being completely lost at this point in the book first read through. And yes, I know I should do my research and that my high school journalism teacher is likely threatening to rise from her grave at this moment.

However in my defense, I like these books without any spoilers. They come to me from the bins this way and I seek to persevere the mystery and discovery of the potential treasure they hold. Typically it's like reading a novel by starting on page 40. But there is something pure in that. Something that says "if it's a good story, no matter where you start you will get swept up in it."

I'll admit that without the benefit of research this story did that. I had no clue what was going on but it was intriguing enough for me to try to fit the ten puzzle pieces I DID have into a coherent story.

And that leads us back to the next jigsaw piece, that there is something wrong with the disease and that fact is being kept under wraps. Our detectives are speaking with one of the few public figures in The Beauty community that might be able to spread the word in a credible way. We also learn that our African-American friend is an "anti-Beauty" terrorist, whatever that may be. 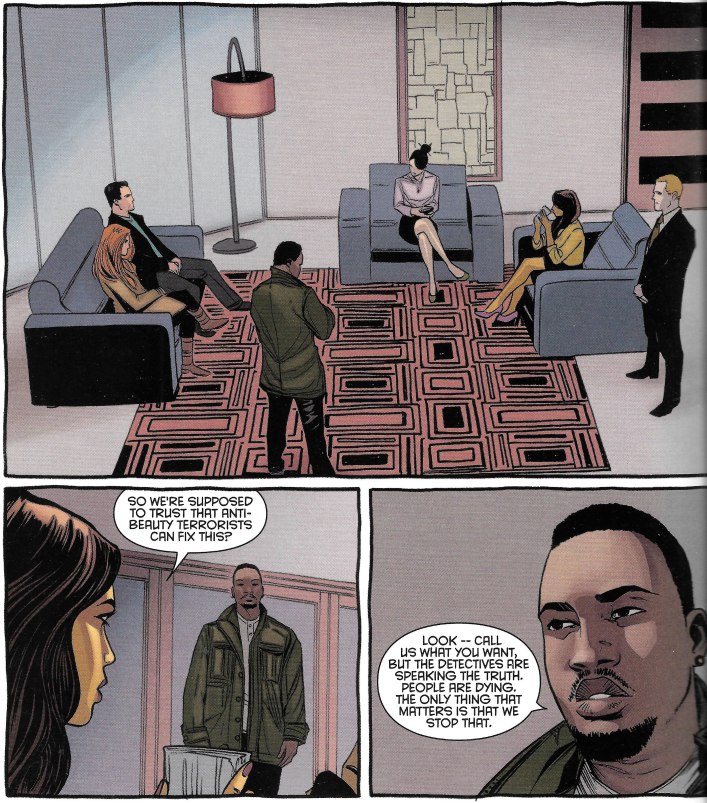 Now this lady, the one in yellow talking on her cell phone, just has to arrange for the media to cover this story in a fashion that people who are infected will listen to… 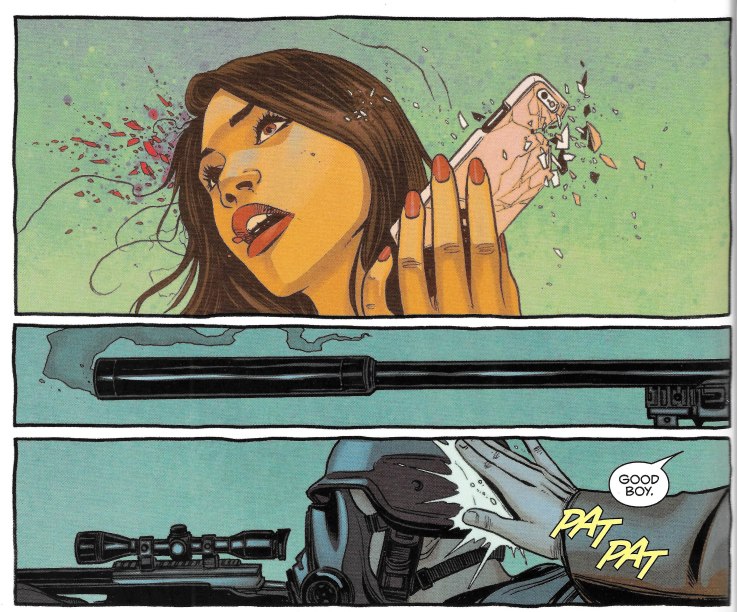 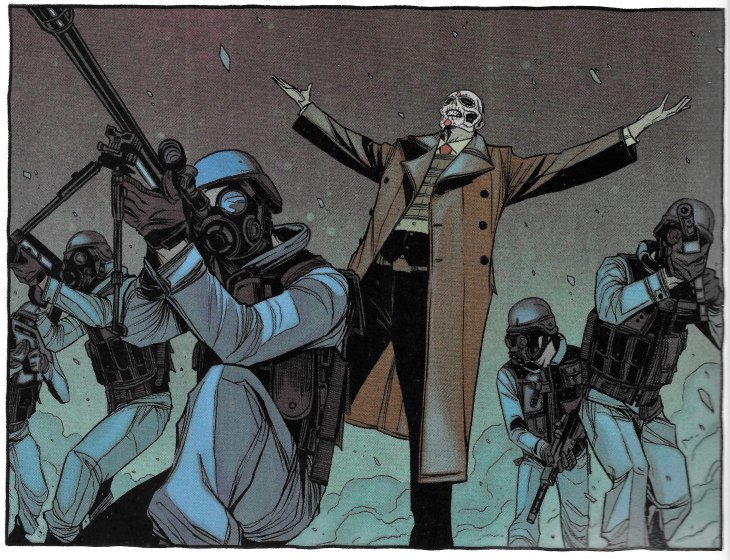 Shot by the discount SWAT team accompanying this fellow in the scary-skull luchador mask and trench coat. They bring with them conflict and an action sequence that accounts for the death of everyone but our three main characters and one other thing…

It is a minor quibble. It is an art thing. And a logic thing. And an OCD, can't-let-it-slide thing.

The two panels above show the person using a scoped rifle to shoot the lady in yellow through the eye. This is the very next series of panels. 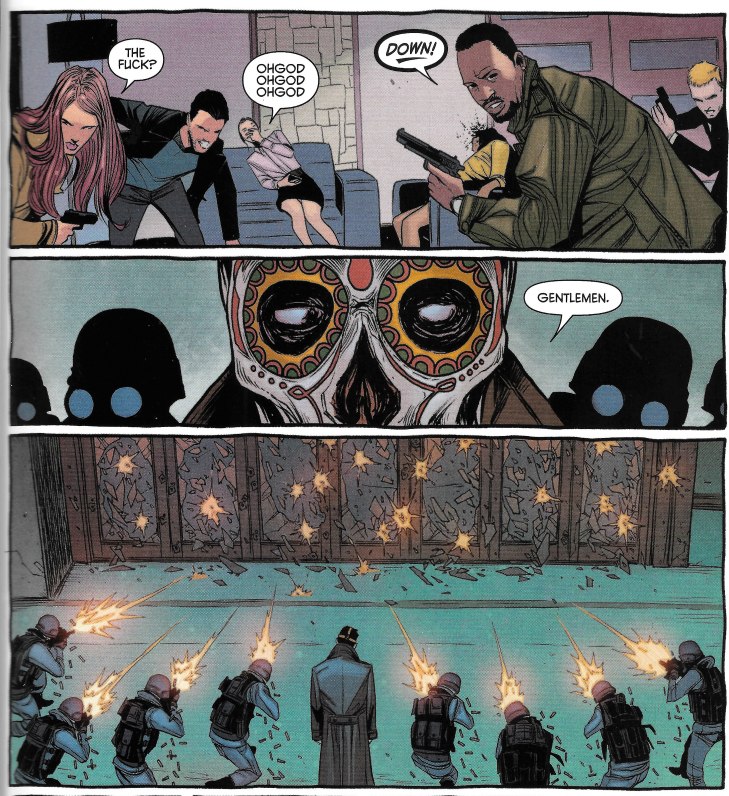 Exciting, isn't it. Lots of "budda-budda-budda" and the book kinda changes direction here to something more like Jason Borne flick.

But notice where they are: Right outside the window of the very room everyone is meeting in. Which A.) makes the scope less of a necessity and B.) creates the impossible conundrum of how they got out there without anyone noticing. It's all just a setup for a cool entrance by luchador skull, but still…

Oh and we need to get rid of all the extras, so here's some scenes of that. 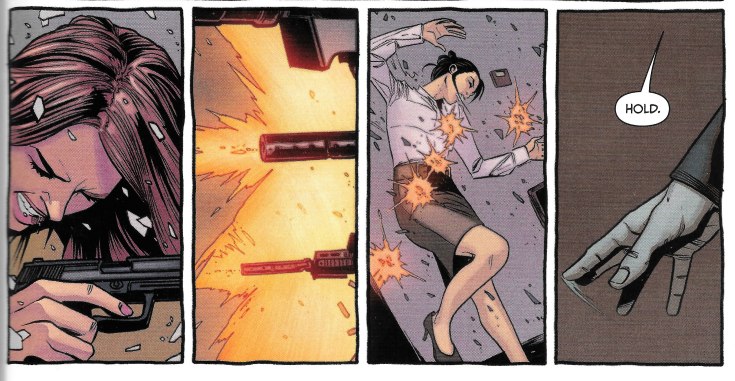 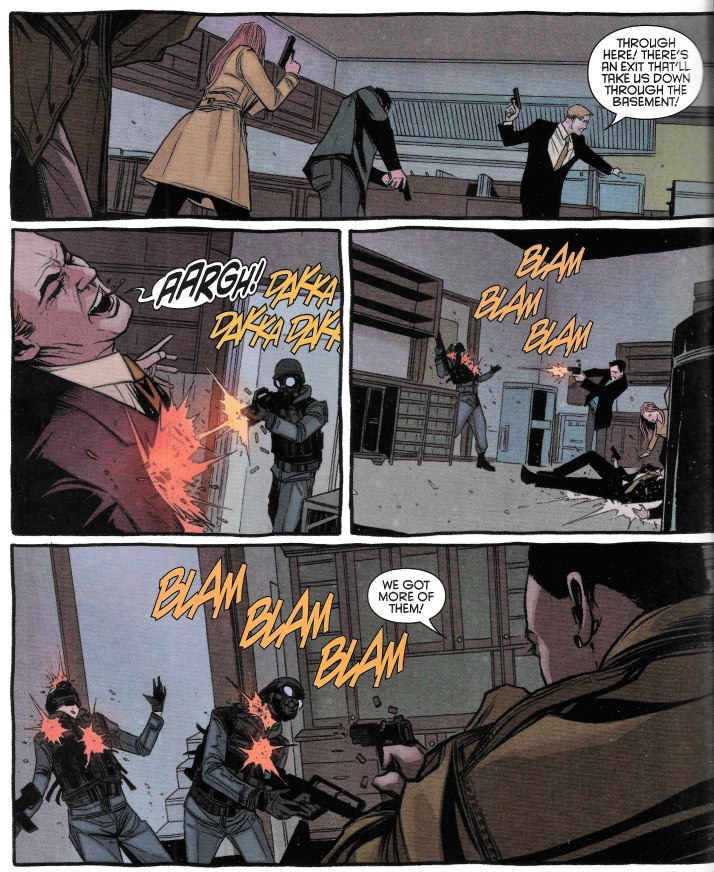 Which leads us to breaking away from this action as our three heroes escape, and into a quiet study where two elderly women discuss how they need to "thin the herd" with a story about actually thinning a herd. Not that we miss this is all leading up to them stating they have a cure for The Beauty. Something they won't be making mention of for an entire month. 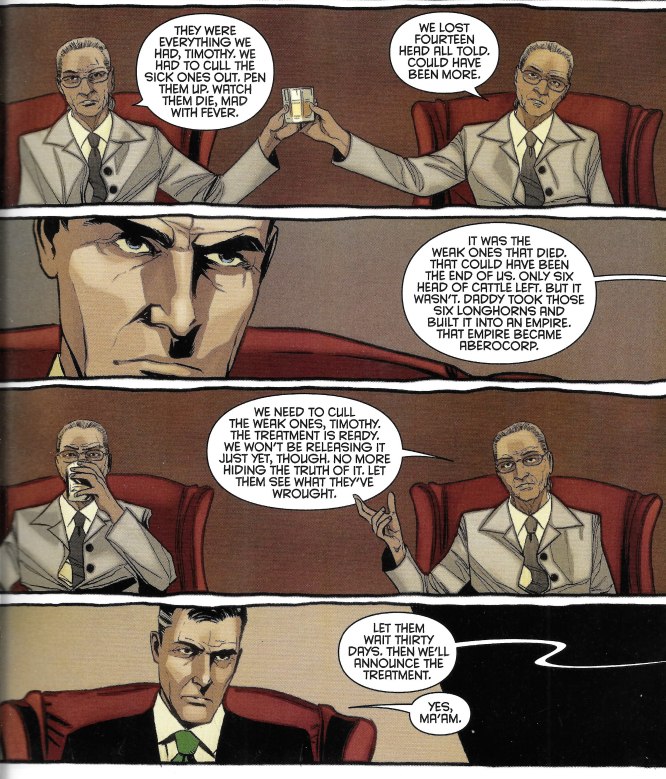 And speaking of nice people, our lesbian better half gets kidnapped by our heroes because they believe her to have sent Mil Mascaras in a trench coat after them. When she learns the nature of their attacker though? 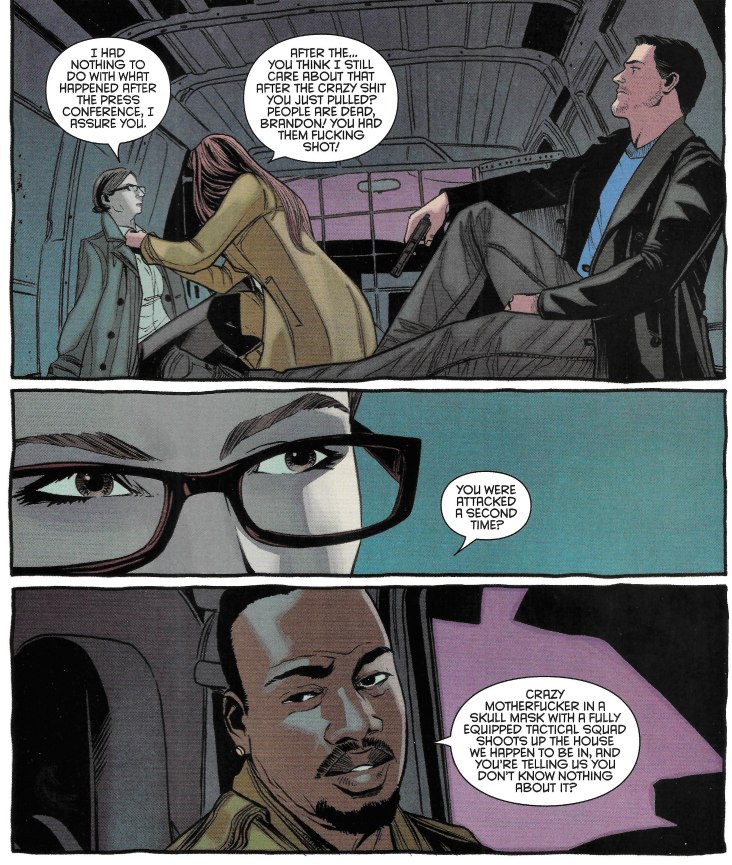 Let's just say she's a bit shaken up. Not shaken up enough to throw in with them though. Appears issues 1-3 must have held a plot point where our trio picked up a guy that can cure The Beauty, something this beaked nosed woman wants to happen. 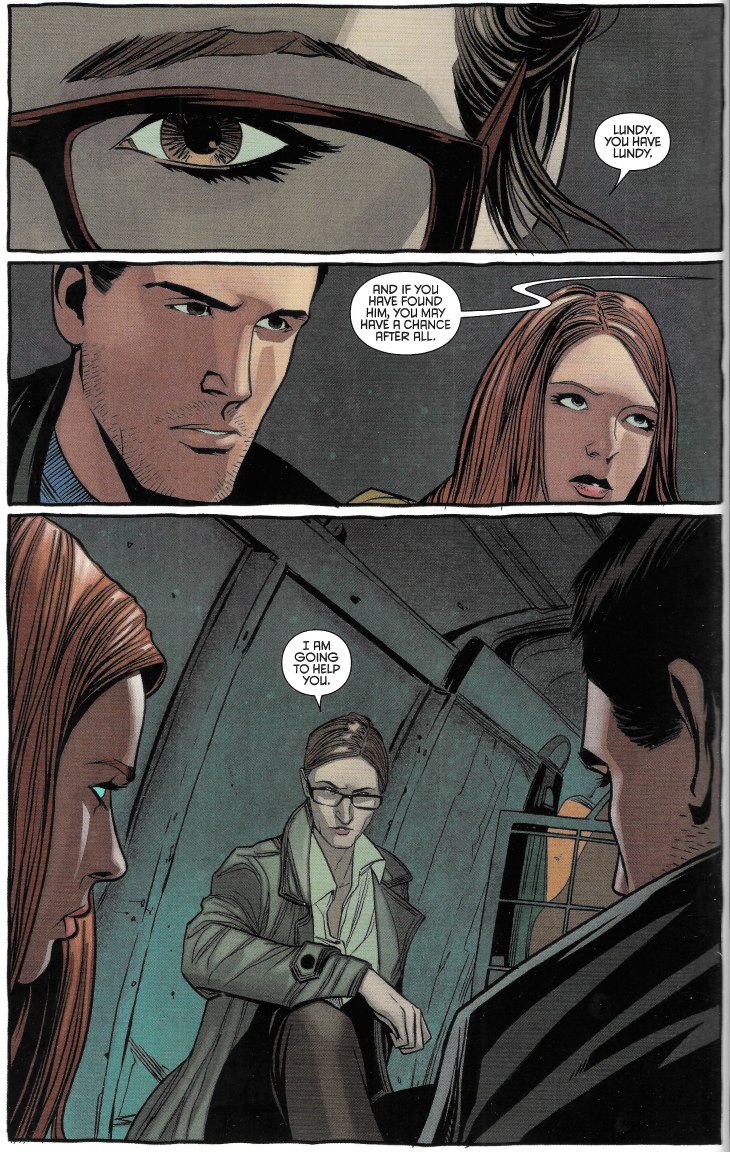 So my take on The Beauty? It is an extraordinarily good concept that, at least for this issue, devolved too readily into standard action tropes. The art tone saves much of it and the writing is good, I just want more of the story. And not just "the story" but more of the exploration of why someone would make choices given the unique world the authors have created.

This falls too quickly into bad-guy/good-guy suspense-thriller territory, with a setup almost James Bondian in its execution. I think the authors would have done so much better to have tackled the real social issue of The Beauty virus. It has a potential that seems wasted in many ways. Given the hard questions that their own world building presents, there should really be more meat in this story. And the trappings of action movie could be tossed right out the window in favor of those personal stories, at least for a long, long while.

I know, I know! Stick to what's on the page. It's decent to good and deserves far better than to end up in The Crapbox. But ah, what could have been… 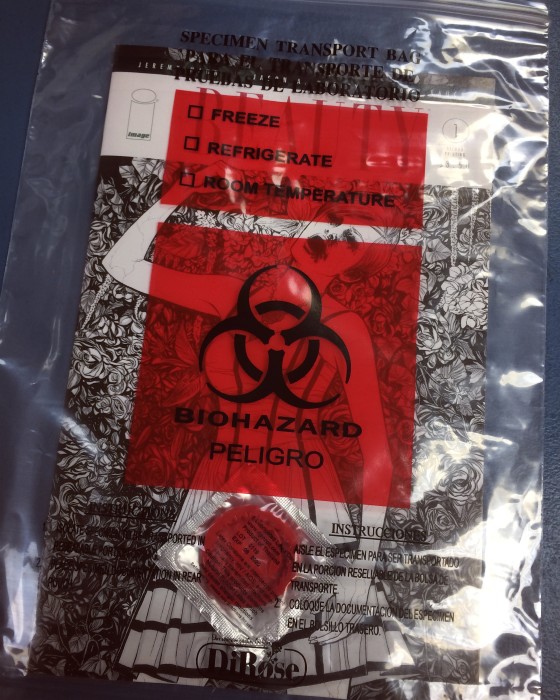 Epilogue: as an aside, I'm showing you what the first issue came packaged with at 2015's New York Comic Con. Yes, that red ring is exactly what you think it is. 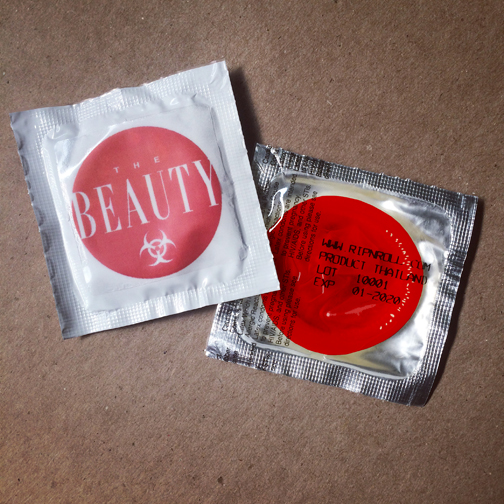 Posted by SonOfCthulhu at 9:56 PM