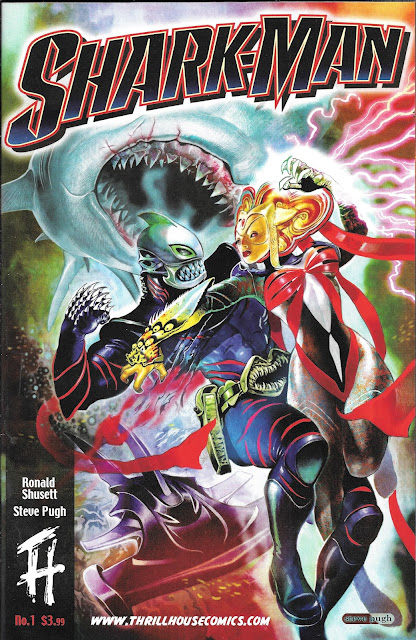 File this one under “Dumb name, good book” in your collection.

Seriously, this one came as a total surprise. I discovered this little fella floating around in the .50 rack on the bottom shelf at Half-Price Books and after a quick read through (had too – I mean look at that cover with all that rich color, those outfits, and the shark belt buckle that looks so inconvenient. The book screamed “move me to the top of your reading stack!”), I was more than mildly surprised.

Now that I have read it, I have to dig through the Crapbox to see if any more made it in unnoticed.

The why of that is simple: this book hooked me. The art looks marvelous, the story is derivative of the Batman mythos, and the book ends on a cliffhanger setup that made me want to know where it would go next. It’s also a hell of a lot of fun. Let’s get started, shall we? 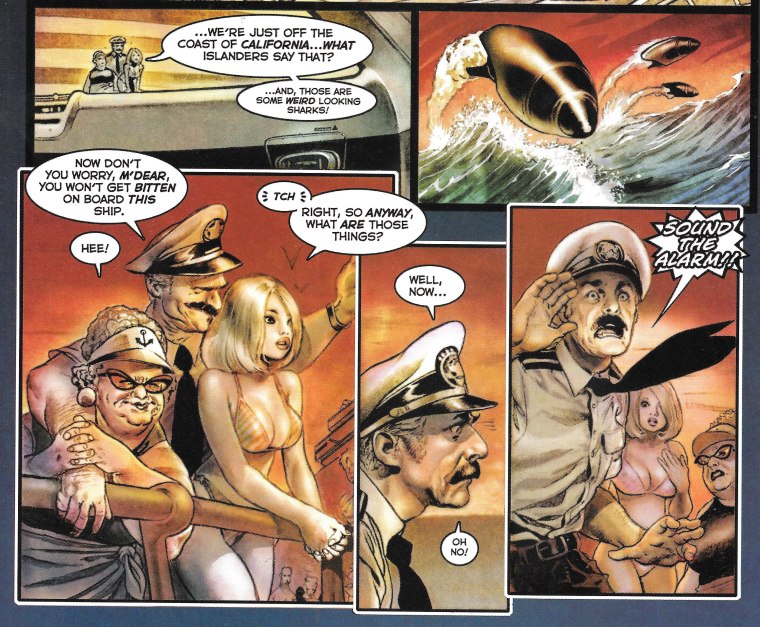 We begin on the deck of this luxury ocean liner called the Pacific Dream. The captain of the ship is regaling two passengers with tales of the sharks in the waters below them, currently in a feeding frenzy. He explains that islanders believe the eating habits are actually a tribute to a huge fearsome shark-god, large enough to bite their ship in two. I think he’s full of whoey and just looking to get into the young girl’s bikini briefs.

Something unnatural breaks the surface… 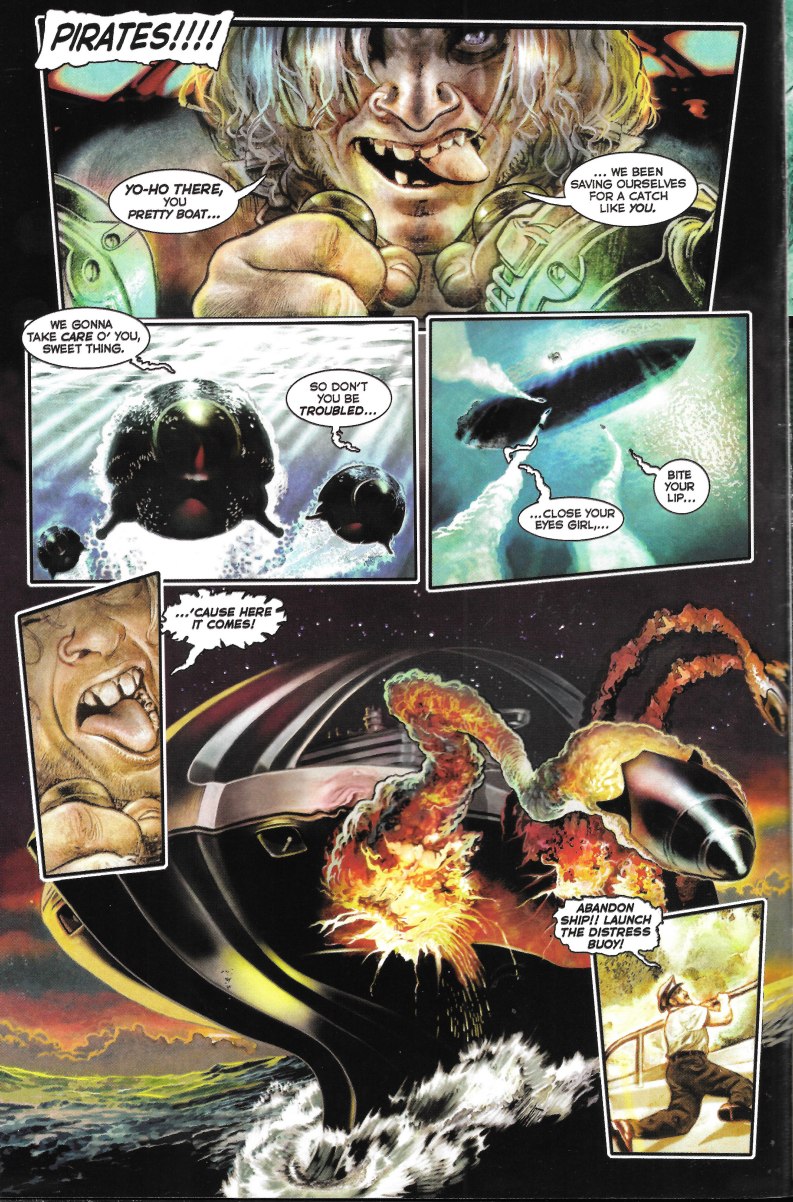 These bullet shaped objects are submarines equipped with jet engines. They quickly hole the ship, sending all the passengers and crew into those very same shark-infested waters.

The movement is actually a ruse to draw Shark-Man, who was heading to disrupt the very same group of pirates from hacking the city’s bank account and making off with all of his (and everyone else’s) money. This is clearly a distraction, but one he can’t ignore. 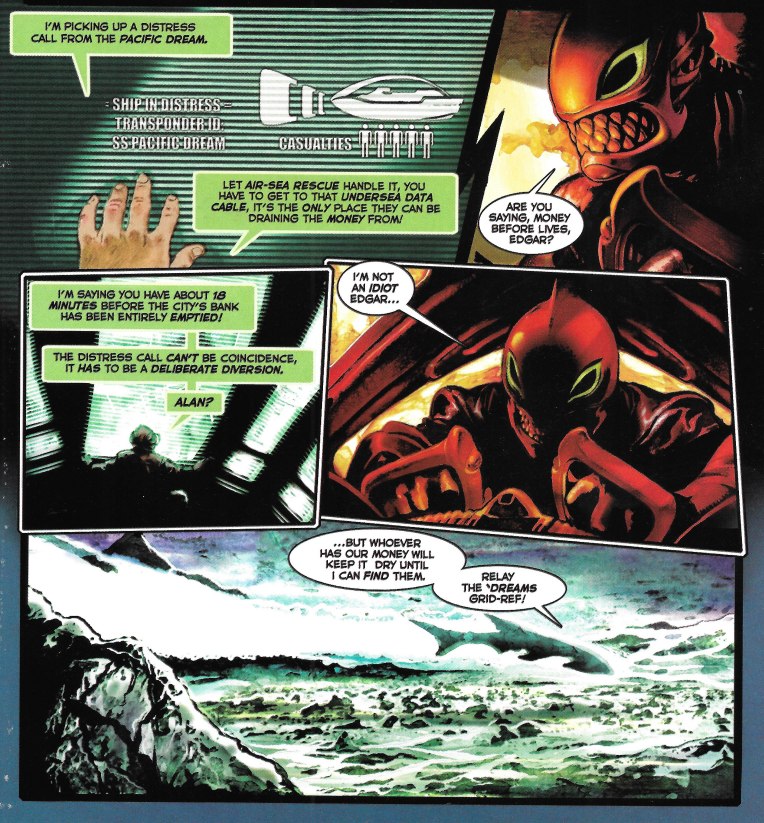 Note the interplay here. We have Shark-Man, who is billionaire Alan Gaskill, totally riffing the Batman hero vibe. Edgar, his faithful man-servant, pulling an Alfred Pennyworth completes the setup. We’ve seen this trope used so often that it fits like a comfy pair of loafers. Immediately we know the archetypes being used. That means we can shortcut a bunch of setup and immerse ourselves in the story without hesitation. And it is a really good story. 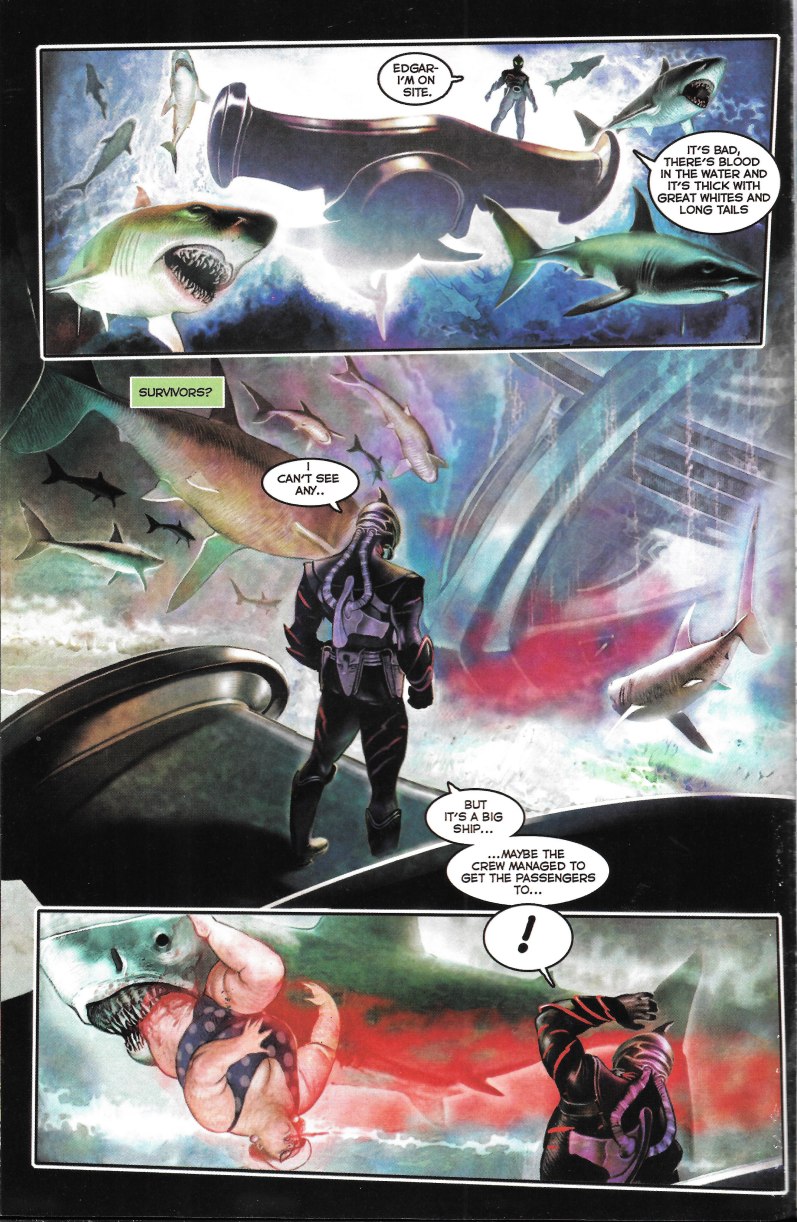 Alan arrives too late to be of any use to the passengers. They are already fish food. I wondered if Alan had any shark empathy powers that would come into play here, but apparently not. And while all he can do is watch, that doesn’t mean that he doesn’t try save someone. 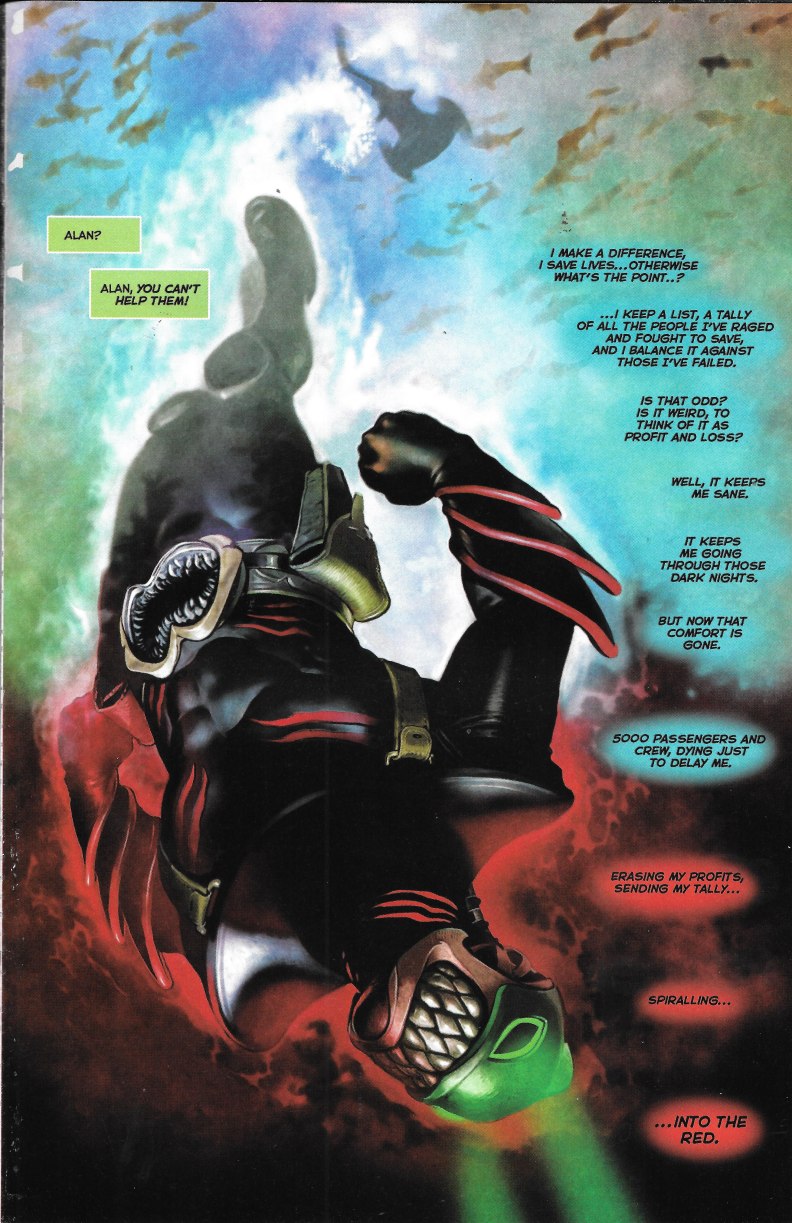 Visually the book is freaking fantastic. I thought the cover looked great, but usually the interior of books like this look muddy or overly dark. Steve Pugh’s sense of balance and use of bright neons in his color pallet prevent that. The book feels vibrant and powerful. I love scenes like Shark-Man standing on the top of his hammer-headed Sharkmobile backlit by the sun.

I have to warn that the book is a bit dark, however. If this IS a Batman book, it’s the Killing Joke or possibly one just as violent and bloody.

Look at those stunning panels, however. 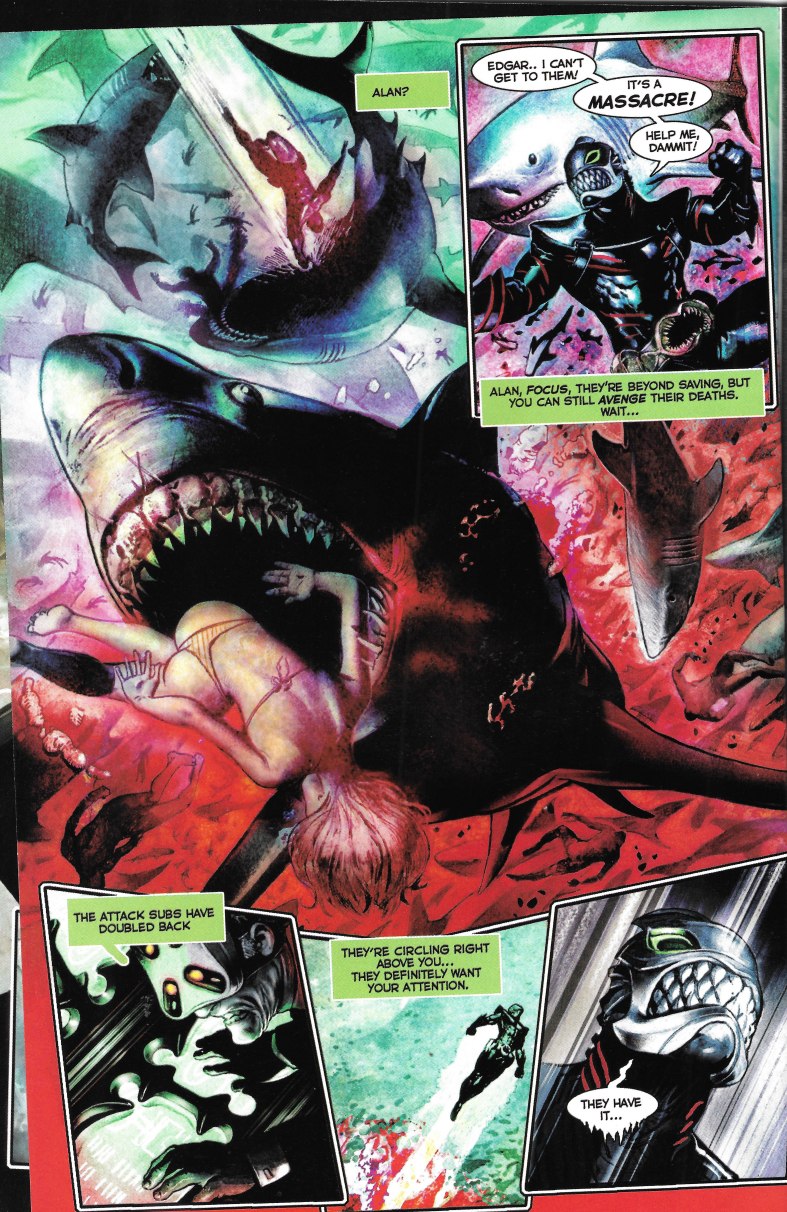 Shark-Man goes to confront the pirates who have killed all these people and are also stealing all of his money. 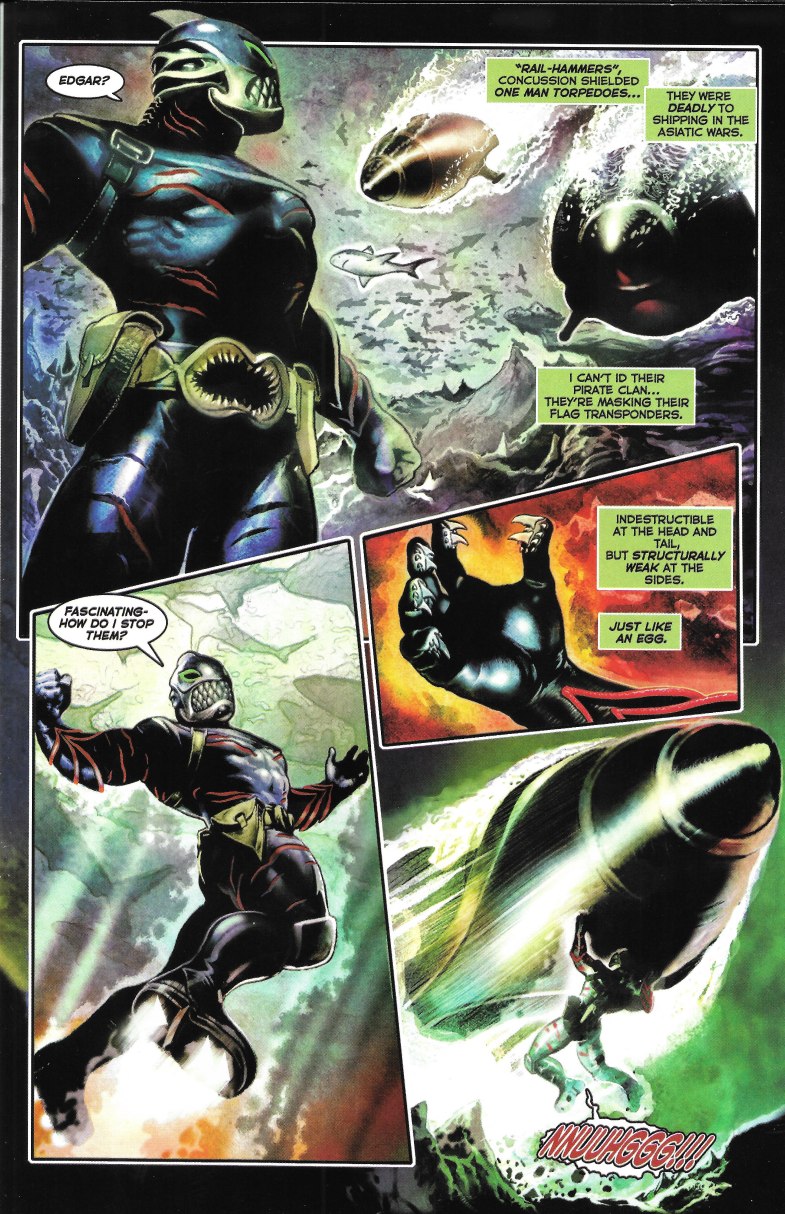 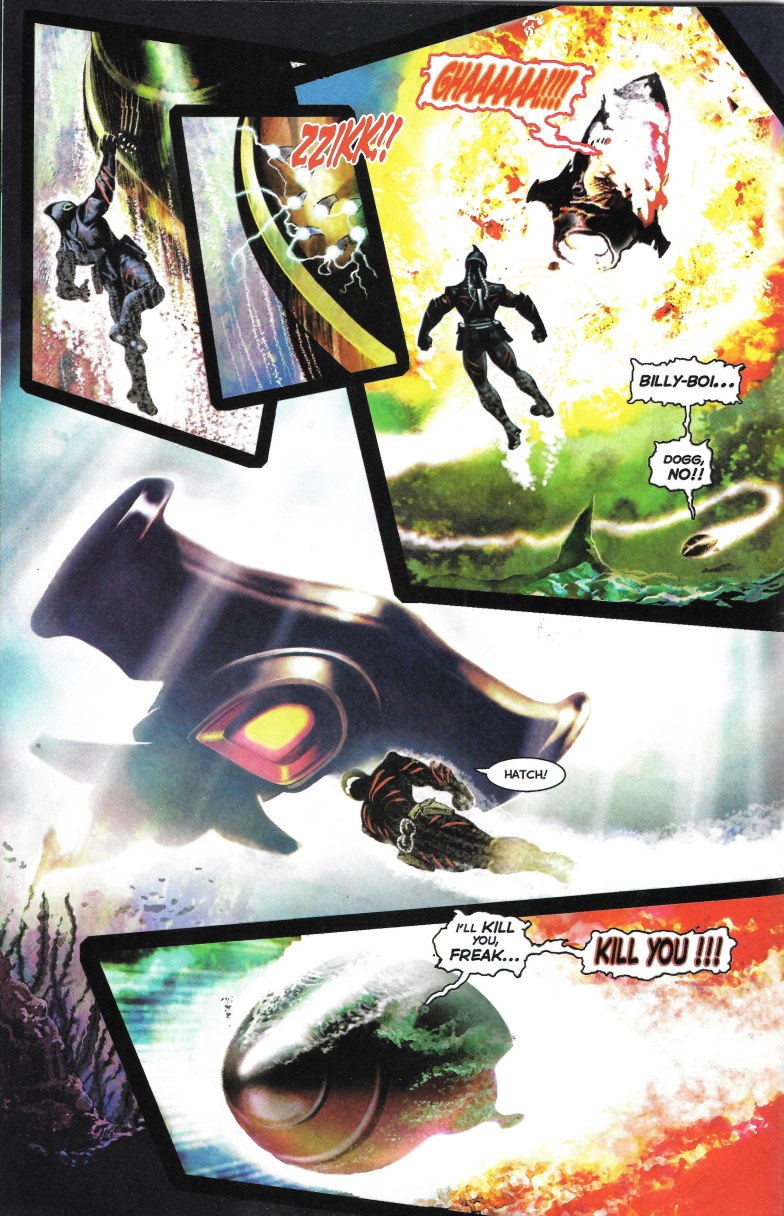 …applies a small explosive device and…blammo! This makes the other sub driver quite upset.

I’m showing full pages here, which I am loath to do usually. This is a review site, not a substitute for Pirate Bay, so printing only the panels I want to focus on is usually my intent. However I am showcasing what Pugh can do with a page. I love the touches like the ocean floor shown in the bottom left leg of the tranquil middle panel. Couple that with the inset picture of the bullet sub outlined in glowing orange-white and red, the juxtaposition of which shows even more the different temperaments between these two opponents. It is so great when the art tells the same story as the narrative. 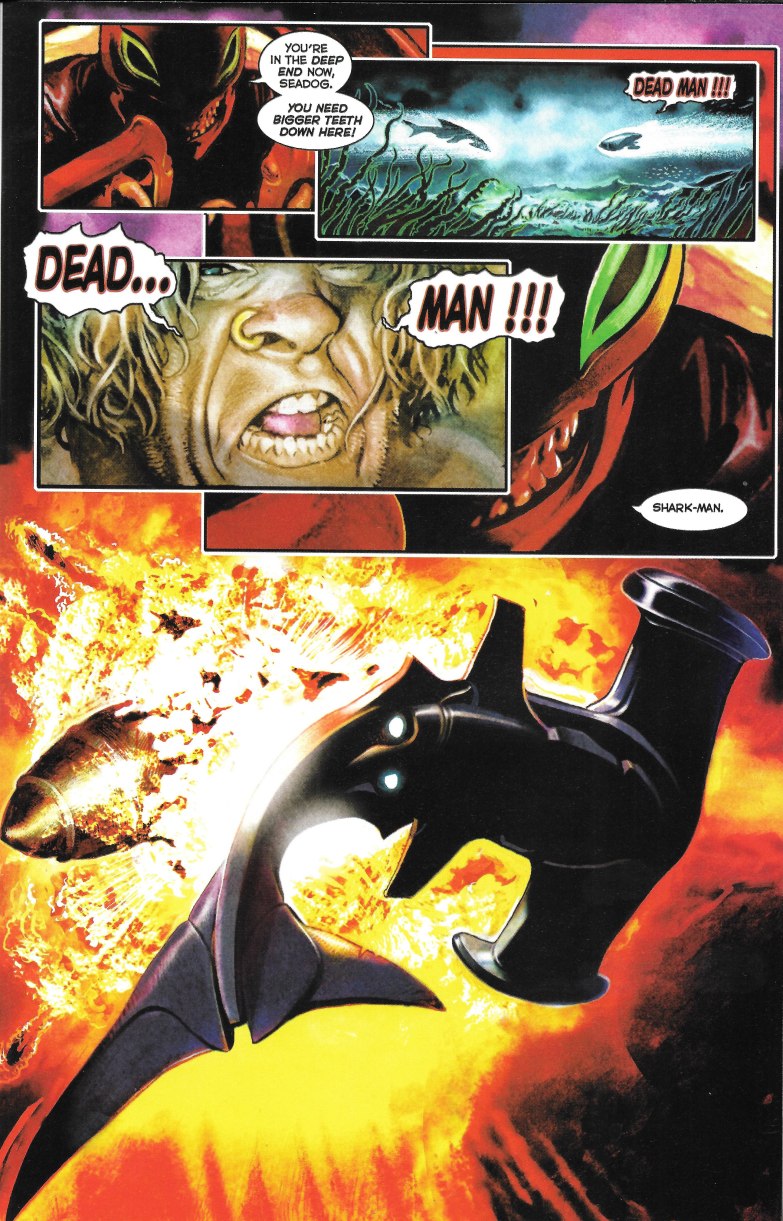 Likewise, the opposite page where Shark-Man plays chicken with a bullet sub shows a cinematic build-up and payoff. It is around here that the book netted me as a reader. I liked the way the story was being told and felt invested in the character, in part because we know this archetype so well.

From the shattered remains of the bullet sub comes a tiny sub that attaches to Shark-Man’s ship, tracking his movements. Edgar informs him that he is broke, as well as the city he shepherds. That’s not good news. 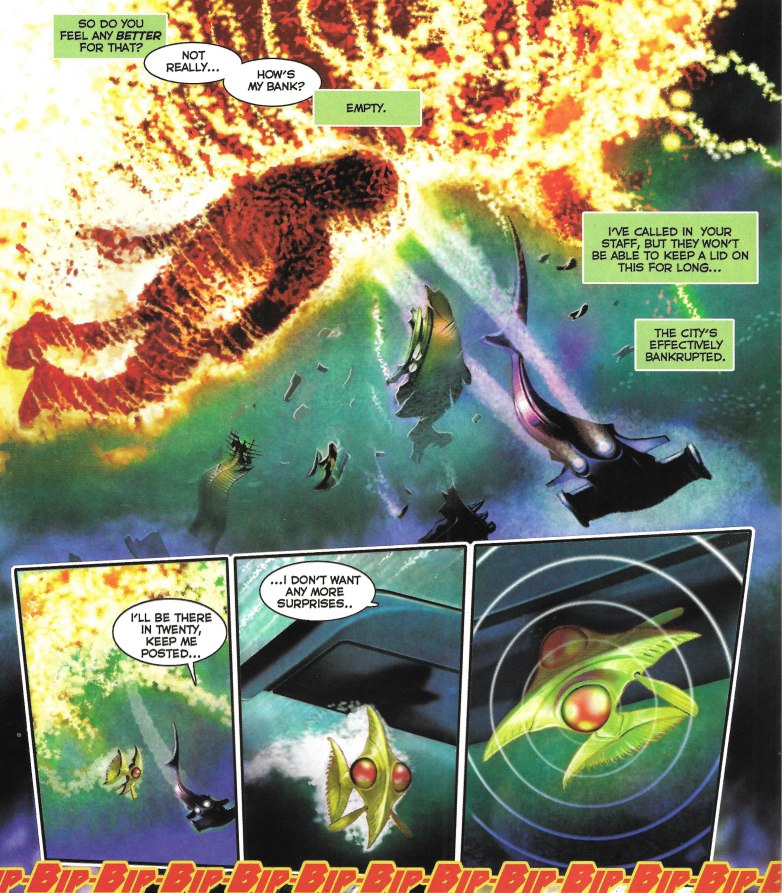 On the brighter side of things, we turn to Alan’s son Tom and his date Jenny. Tom seems the okay sort, if a bit conceited. Jenny works for his Dad and she is called in to deal with what is rapidly unfolding into a huge crisis for all of these characters. Tom, of course, ducks all responsibility and interest in these proceedings, apparently due to a rift with his father. 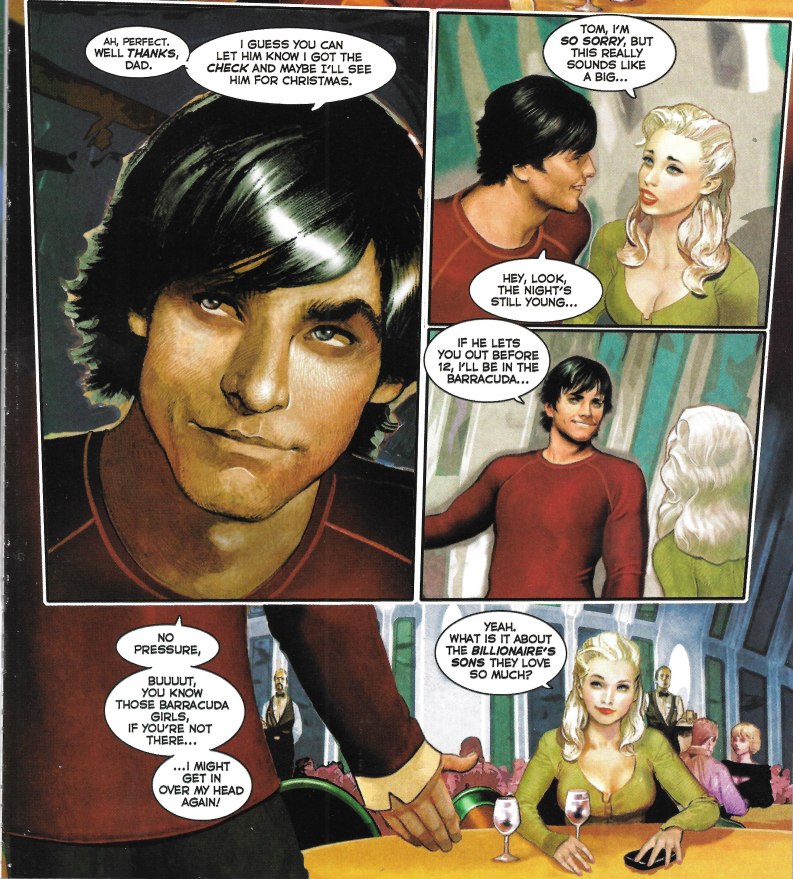 As crisis after crisis begin to pile up, Alan arrives just in time for the Governor of the floating city Alan has built to begin his crusade to put him behind bars and seize complete control. I love how Shark-Man’s concern isn’t about the political implications of what is happening, only the chance that some survivors might have been rescued. 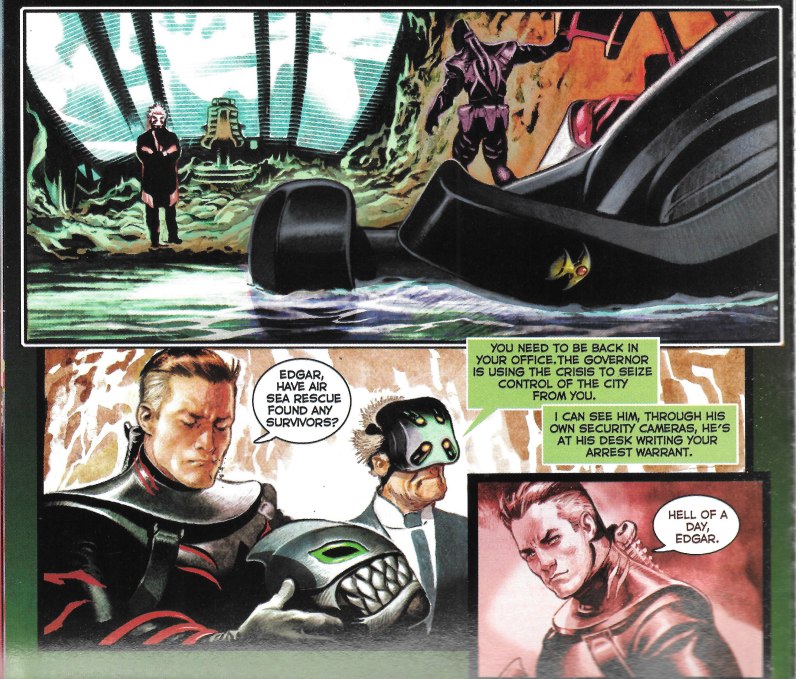 Alan leaves Edgar at the “Sharkcave” and heads up to face the music Governor Kane is playing. Edgar is wearing some kind of new fangled techno helmet that lets him tap into all kinds of data and information, for all the good it has done them so far. He’s literally Alan’s “man in the chair.”

While we are on this page, just look at the vibrant glow of that image. It feels alive and pulsing with neon energy. I love the vibe and power Pugh put in his paintings. And I’m going to say this right now, Ronald Shusett has cooked up an ending with Pugh that will leave you begging for more. 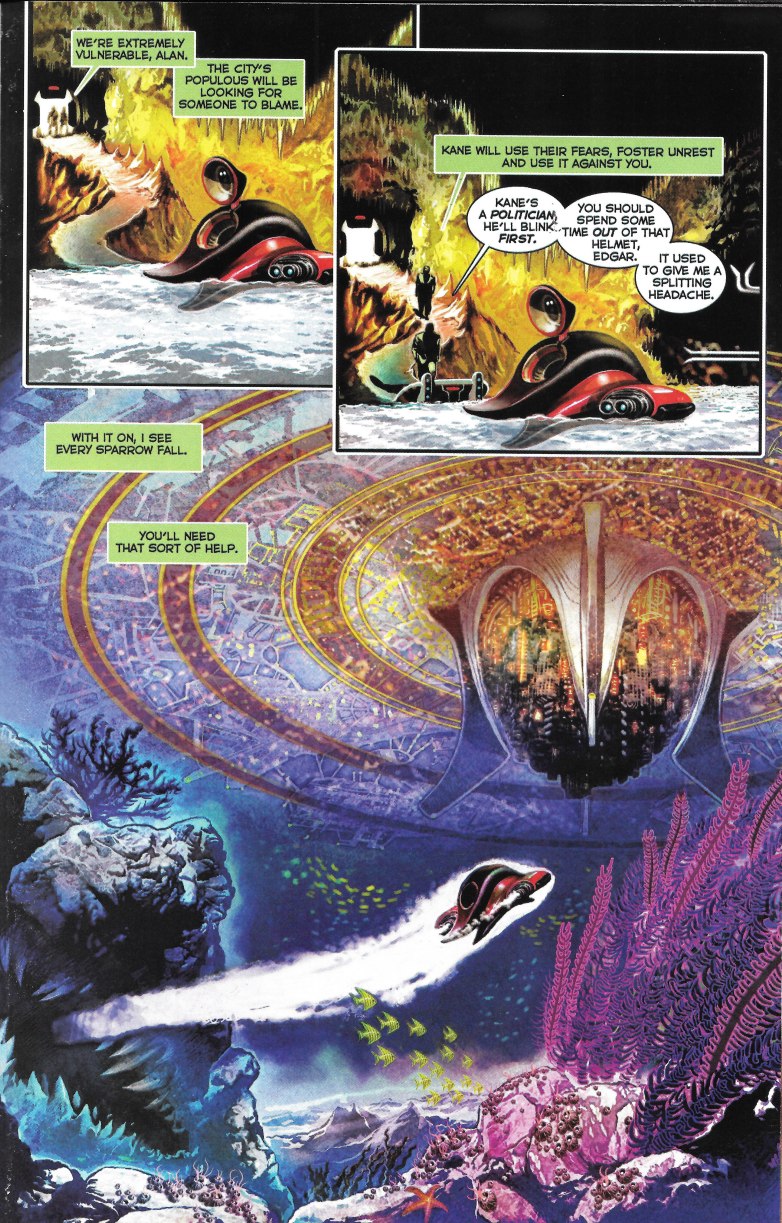 I feel the competition between the graphics and the storytelling trying to top each other. Pugh pulls out all the stops in creating Alan’s city on the waves. New Venice looks spectacular, however Governor Kane’s power grab floating over all the beauty mars much of that wonder. His words even reach Tom, who decides to stand with his Father in his time of need. 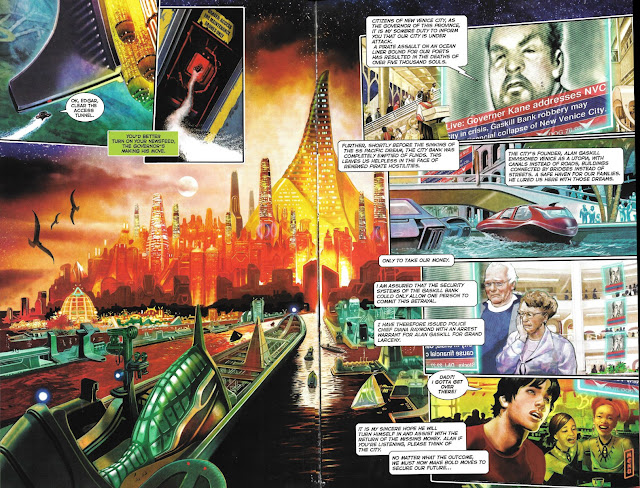 Alan arrives at his office on the heels of the Governor’s broadcast. He mentions that he will have to call in favors to refinance New Venice IF he can avoid being thrown in jail. A priority message from Edgar has him send Jenny away. The call is something sinisterly unexpected: the enemy pirates have found the cave. 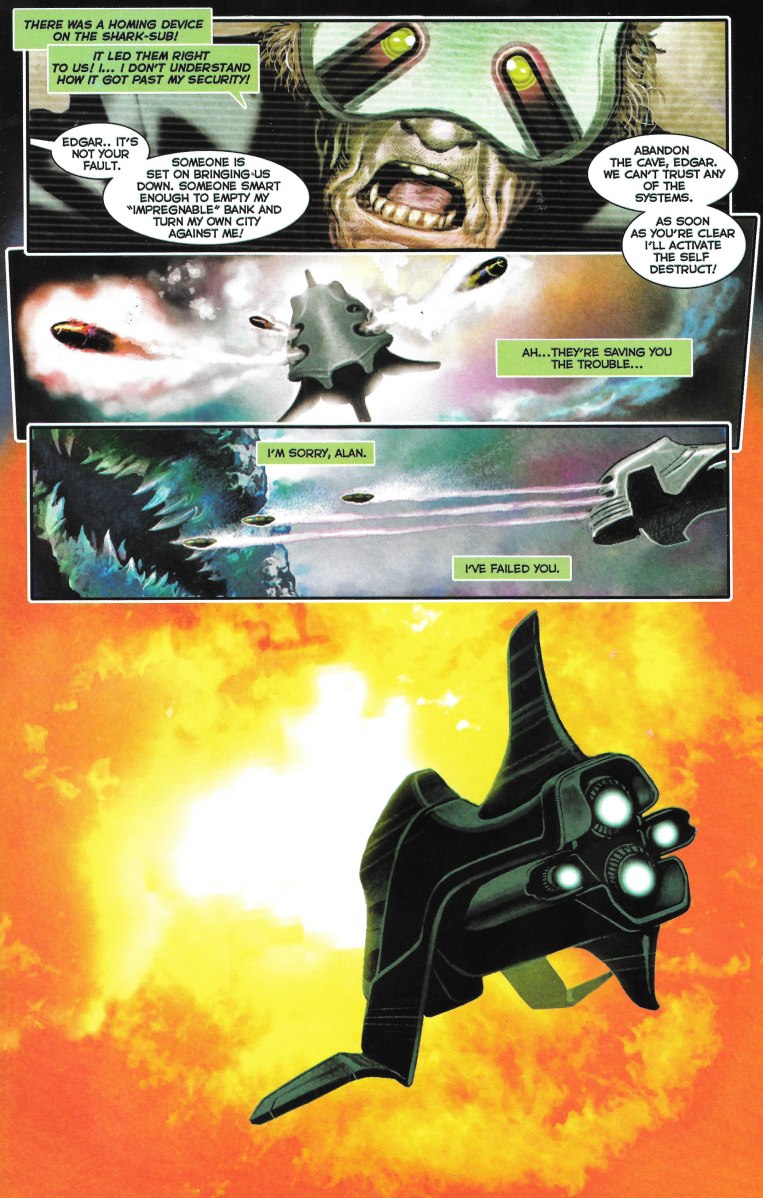 Sooo…Edgar and Shark-Man’s hideout with his very cool monitoring equipment and the Sharkmobile bite the big one in a fiery ball of underwater “poof.” That was unexpected. Who could be behind all of this? 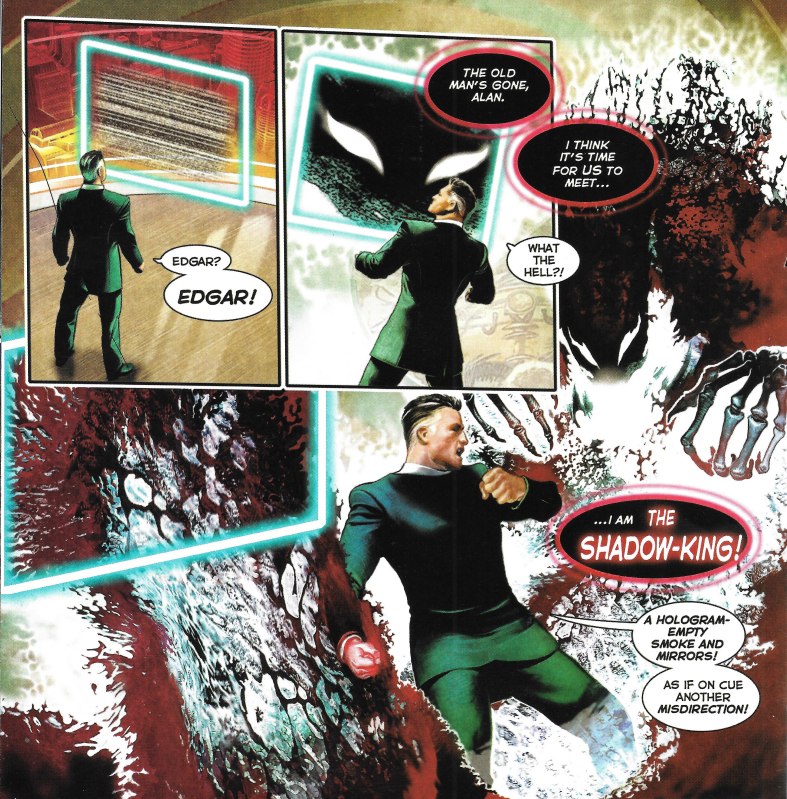 The Shadow-King, a new nemesis, who appears in Alan’s office via hologram. Alan isn’t afraid though, his icy exterior not cracked by this trickery. He throws shade and Shadow-King, if that’s even possible, and asserts he’s in control. Man could give Bruce Wayne tips on being unflappable. 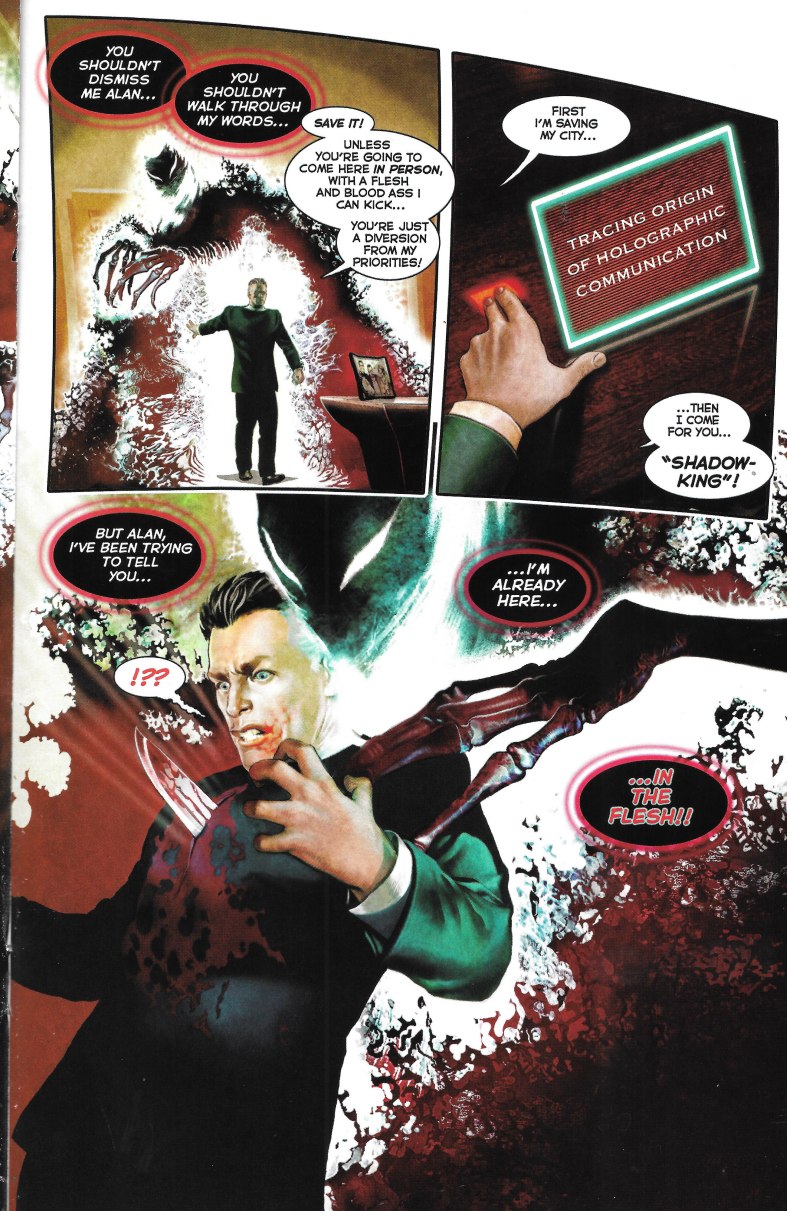 Unfortunately, the Shadow-King isn’t just an illusion, which he proves by shoving a large blade right though Shark-Man’s heart. This book is not going where I thought it was going, but I have to say…after losing our Alfred, Batmobile, Batcave, Wayne millions and now our Batman, I’m decidedly interested in what twists lie ahead.

To which Shusett replies: Tom arrives ahead of the police, meets Jenny in the hall and asks her to delay them while he talks with his Dad… 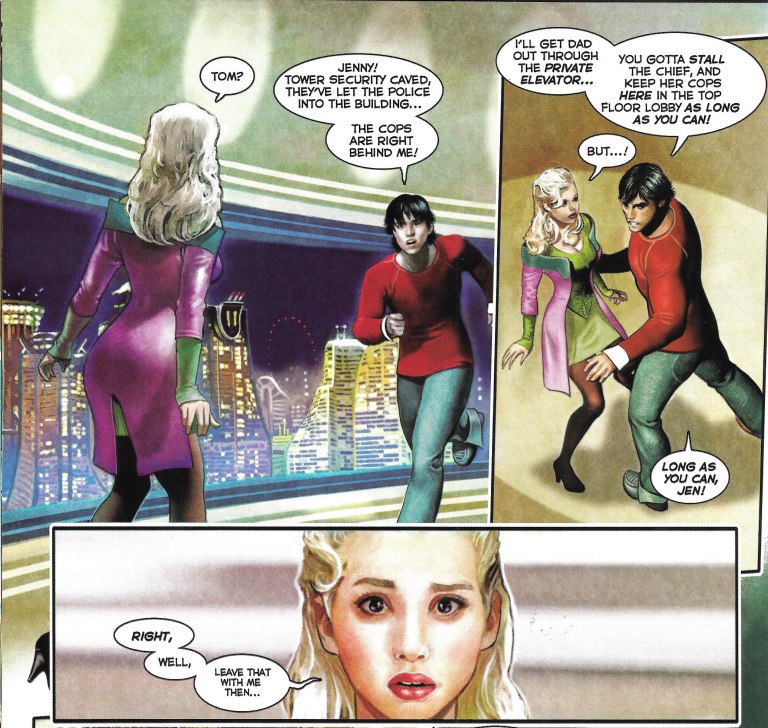 …which she does a crummy job of because he yells out upon finding his Father face down with a huge knife in is back. 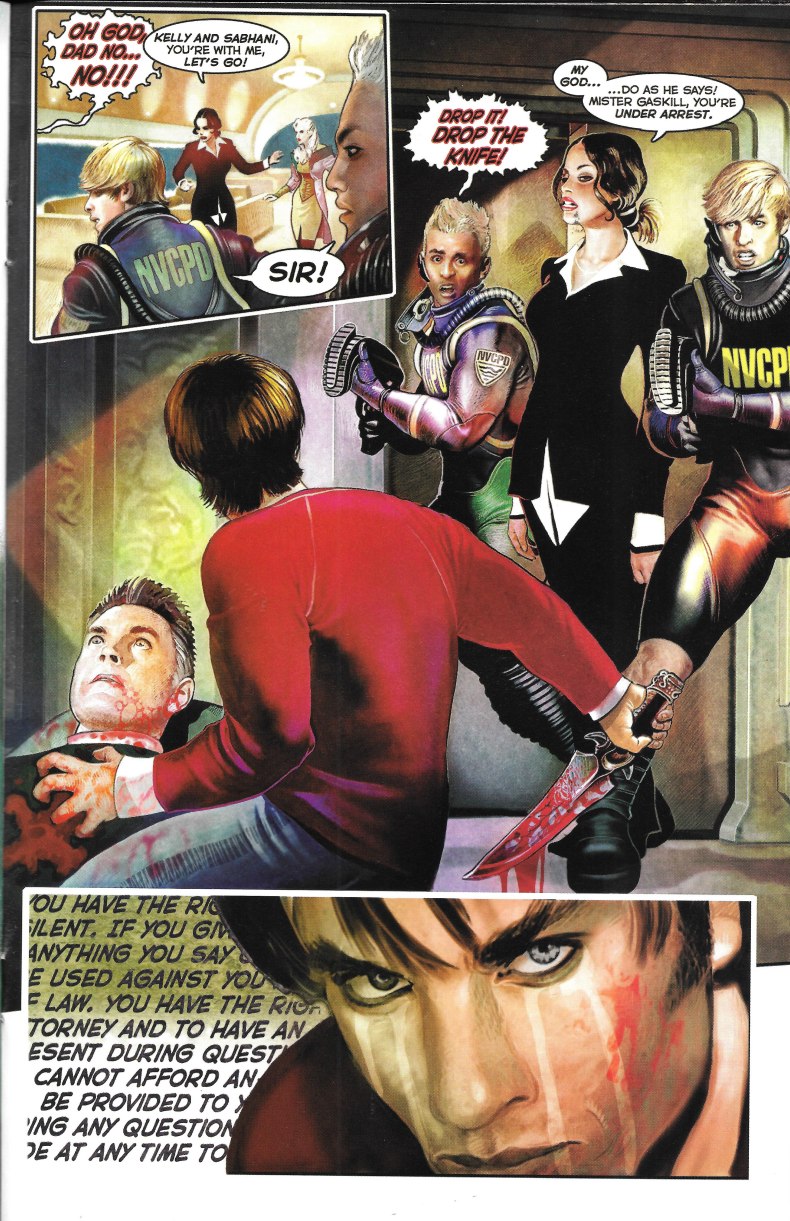 Which isn’t good, as he will now be blamed for his Father’s death.

That’s where issue one ends and I NEED MORE!

This is a hugely good start. The archetypes are washed away (pardon the water pun) and we are ready to start anew with the next generation. However, we’ve throw down IMMENSE blocks to that happening, a great evil to overcome and a city’s populous at stake. Good job guys. I’m intrigued. I want to know more.

But likely I won't.

Shark-Man got two issues under the Thrill House Comics imprint although they show to be six months apart in cover date. Perhaps Shusett and Pugh wrote themselves into a corner? I’ll have to see if that issue is anywhere near a Crapbox to find out.

Image picked up the title the next year in 2008 and it ran for three issues with additional help on art and story, however they rebooted the entire thing. By then, an entire year after the first issue came out, people lost complete interest. Sad, because this had the makings of a really interesting tale.

Too bad its ship has sailed.
Posted by SonOfCthulhu at 8:42 AM