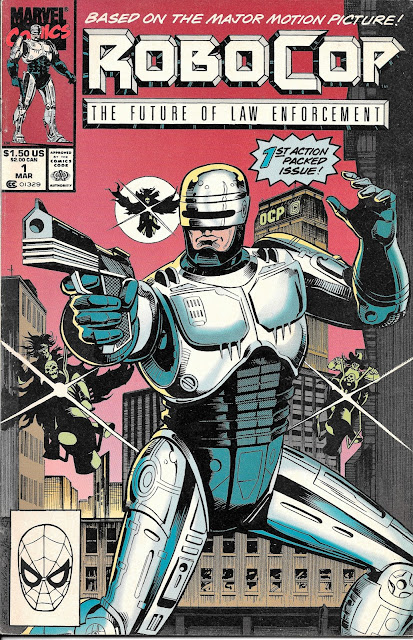 Dead or Alive, you're coming with me (to review this comic)

I will admit to thinking this book covered the Robocop animated series when I first saw it. There was something about that cover that looked too cartoony. Yet to my pleasant surprise, this book was part of a short-lived series from Marvel's House of Ideas that followed the movie character in all its non-PC and satirical wonder.

No, it's not heavy on the cussing and it isn't as witty, but it tries very hard and I'm giving it credit for that.

The movie this is based off of came out in 1987. Paul Verhoeven directing from Edward Neumeier and Michael Miner's script gave us 101 minutes of pure futurist satire action thriller. The story follows brave officer Murphy as he lays down his life to fight crime in the Detroit city of the near future. However due to the Machiavellian schemes of the corporate conglomerate that owns the police force, Murphy is brought back to life, albeit in the body of a robotic cyborg with his personality deeply supplanted under tons of programming code. The story of Murphy's triumph over his inhuman condition and the men who directly or indirectly caused his death is a thrill ride not to be missed, even if just for the running social commentary provided by the newscasts, ads and tv shows that constantly bombard you between the action set pieces.

It was so good that it earned two horribly awful sequels (more on them at a later time) and a 2014 remake that, while not a bad movie, was stripped of all the elements that really made the first film so special.
Oh, And a TV show. Two of them actually. And two animated shows, because blowing peoples limbs off is what children really enjoy for their cartoon dollars. Not to mention the scads of video games and spin offs.

And comic books too. Lots of those. Even team-ups, some of which we will be getting to very soon.

But none of those really held a candle to the original movie. This 1990 book tries really, REALLY hard. And I have to give it props for that. It isn't blowing off the source material or adapting it or changing key elements. Writer Alan Grant spent many years writing future dystopia over across the pond in the Judge Dredd 2000 AD series, so he gets where the heart of this book needs to be. It is possibly the closest thing to the original movie out of all the incarnations that I've seen, second only to the Frank Miller penned movie sequel Robocop 2, that almost got the formula right. It had an issue with balancing the humor and the violence that this book doesn't. 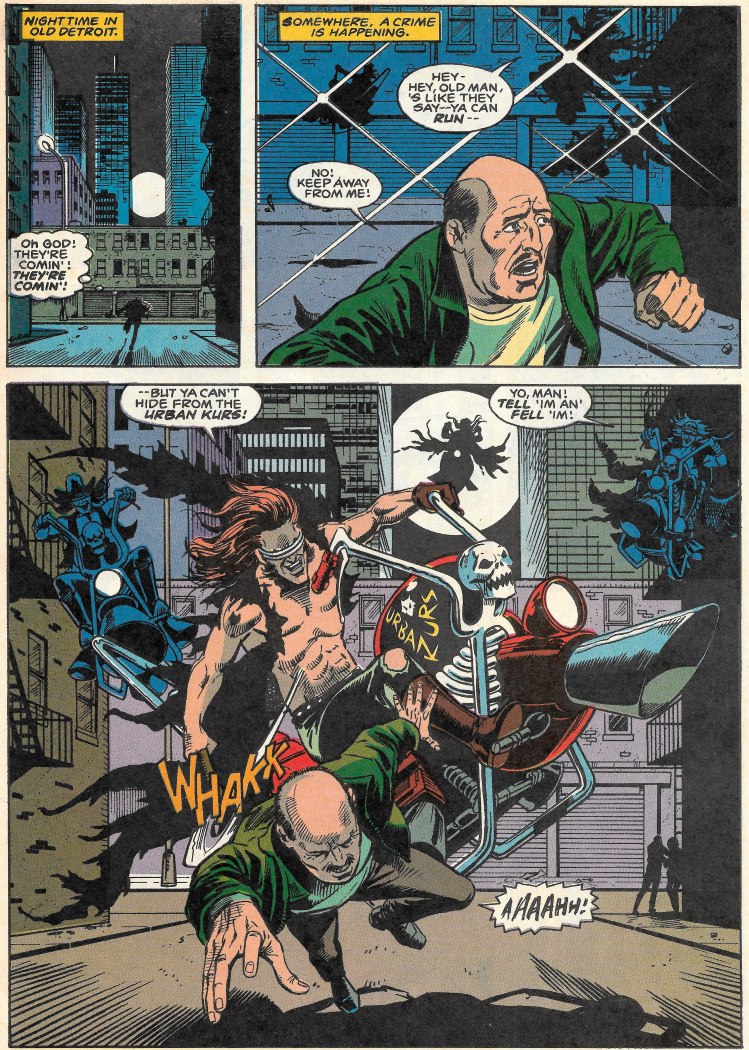 So let's dive in, shall we? We start with a hover bike gang menacing a lone pedestrian out walking in the dead of night. The art chores here are by Lee Sullivan, who is also UK based and worked with Grant on the 2000 AD title. Right out of the gate we get that Judge Dredd feel from this and it immediately becomes apparent what a good choice it was to have Grant and Sullivan on this title. They are perfectly at home in this type of universe, understanding tone and action intimately.

As the hoverbikers let it slip that they are performing a hit on our late night stroller, Robocop makes himself known with his usual style and/or flair. 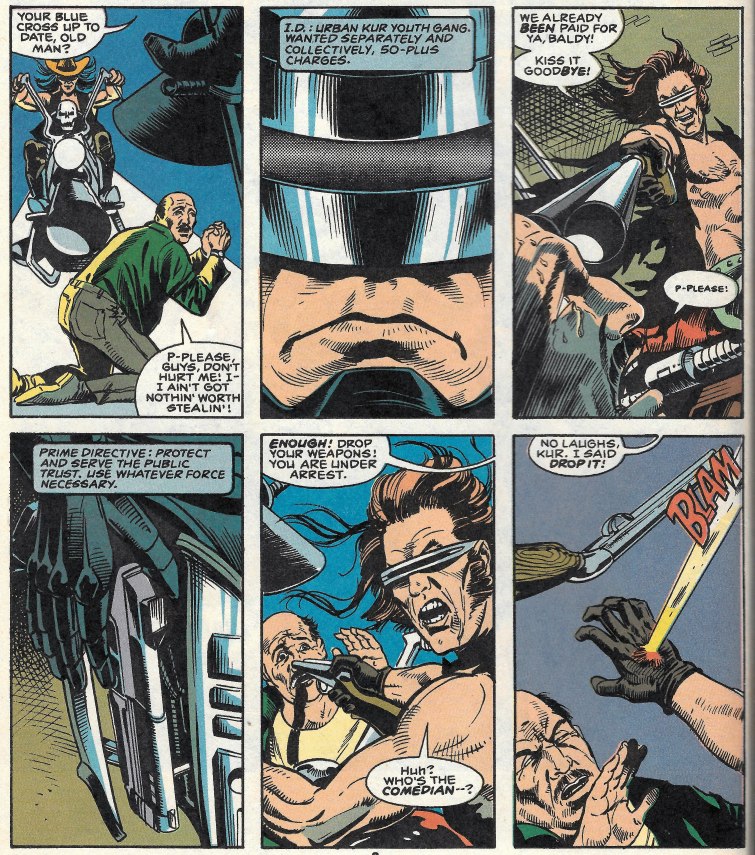 And of course they DON'T drop their weapons, so we are treated to some good ole bang-bang. First, though Murphy gets to make an entrance from a loading dock above street level. 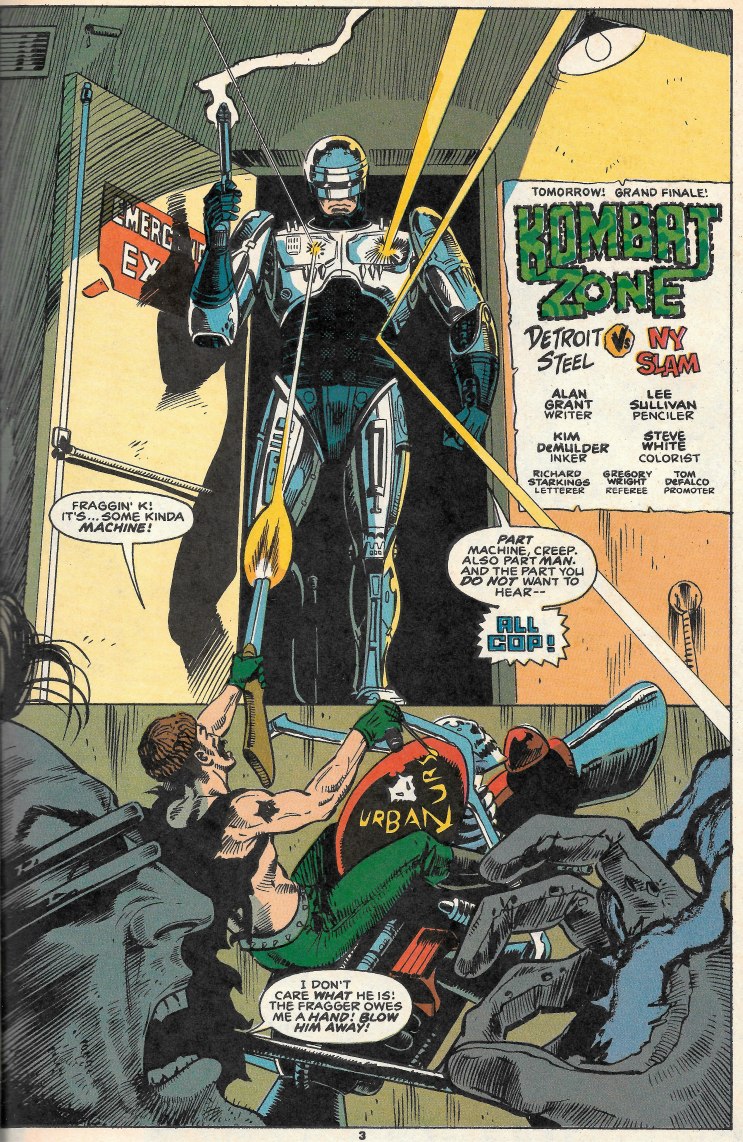 Then we get into the fracas proper, with a shadowy cameraman hiding around the corner trying to get footage of the melee. He lets slip that he's the one hiring these guys just to catch Murphy in action. And for his viewing pleasure, Robocop is asked to do one of those famous trick shots. 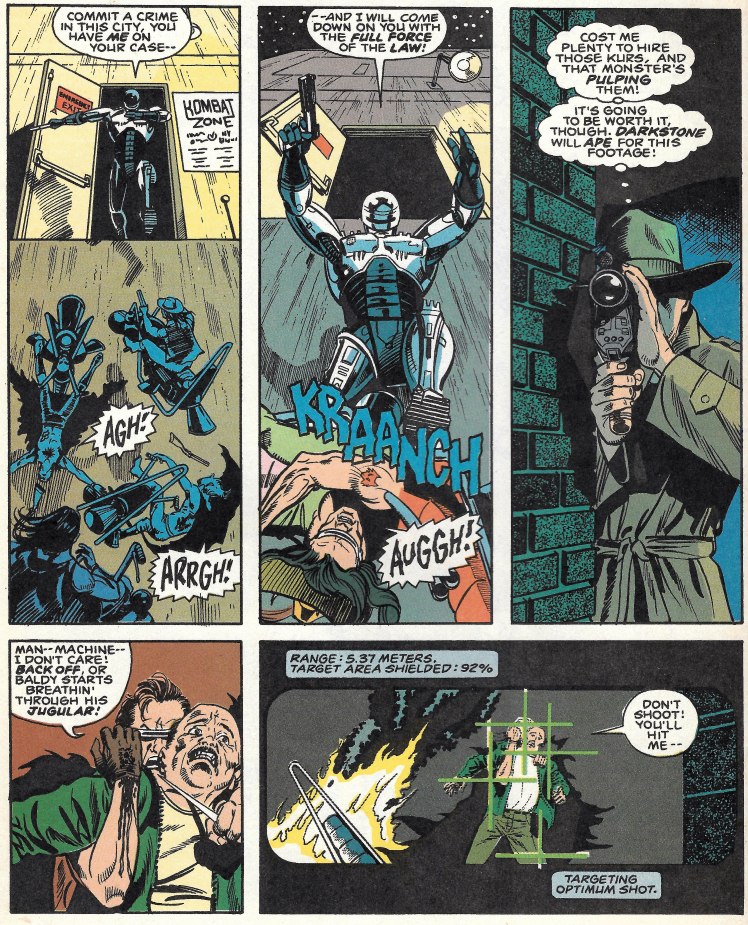 Which he does with the precision we've come to know and love (no crotch shot this time though, dang it! Love those!) Then the camera guy tries to get rid of all witnesses, but he's not fast enough. Robo takes out his flying death machine with it only wounding the intended victim. Robo pursues the camera guy but loses him. The guy being mugged passes out before Murphy can question him so he does a quick infrared scan of his body. It pulls up some parts that place him as part of the Kombat Fighter club. 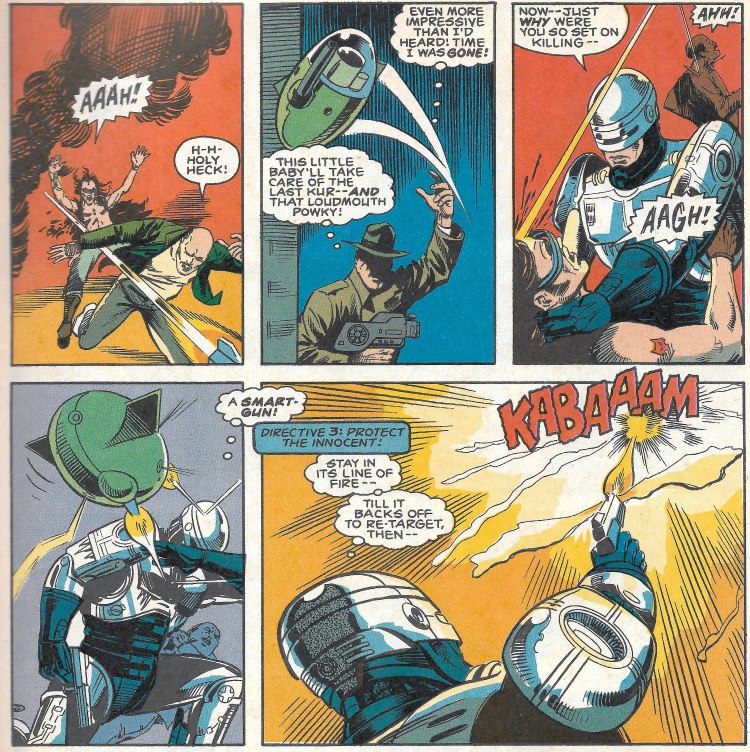 And then the book does something I love it for. It includes the sarcastic newscasts. These were some of the best parts of the movie and provided breaks and bridging scenes. Here they establish the new "heavy" in town, Nixco. Nixco is trying to take down OCP and it looks like all of Detroit will be caught in the middle. 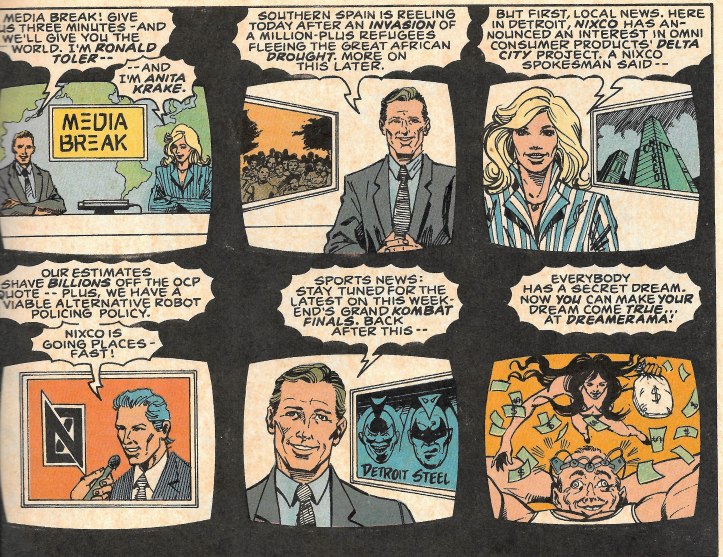 Meanwhile Murphy is trying to gain access to the Kombat Fighter club. The doormen attempt to stop him, he informs them that obstruction of an officer is an offense, they persist, so… 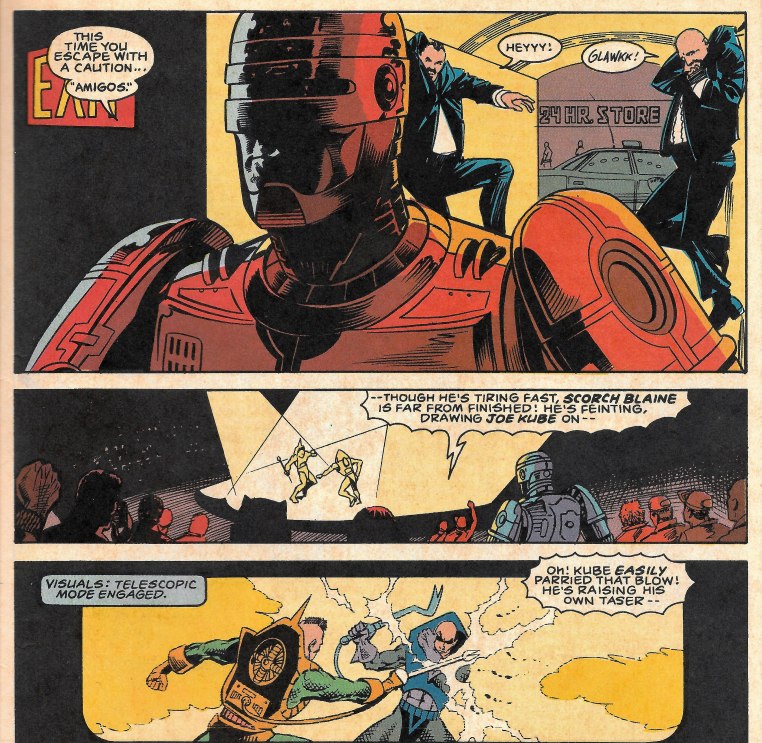 I feel like I should quote Joe Piscopo from Johnny Dangerously. Go look it up and come back when you figure out that joke. With Murphy in the club we can see what "Kombat" entails and it appears to be two guys in insulated suits trying to shock the crap out of each other with Taser rods.

Once inside, Robocop finds physical evidence that Dek Kyng has been fixing fights by rigging the insulated suits to fail. Evidence in the form of a tampered-with circuit board exactly like the one he found on out mugging victim. Kyng isn't in that evening, though but will be back for a big fight tomorrow, so Murphy heads back to the station.

We get a few panels of OCP worrying about Nixco trying to take over interests in old Detroit, especially in trying to create a replacement for the Robocop program. Then back to Murphy having a run-in with Officer Lewis. 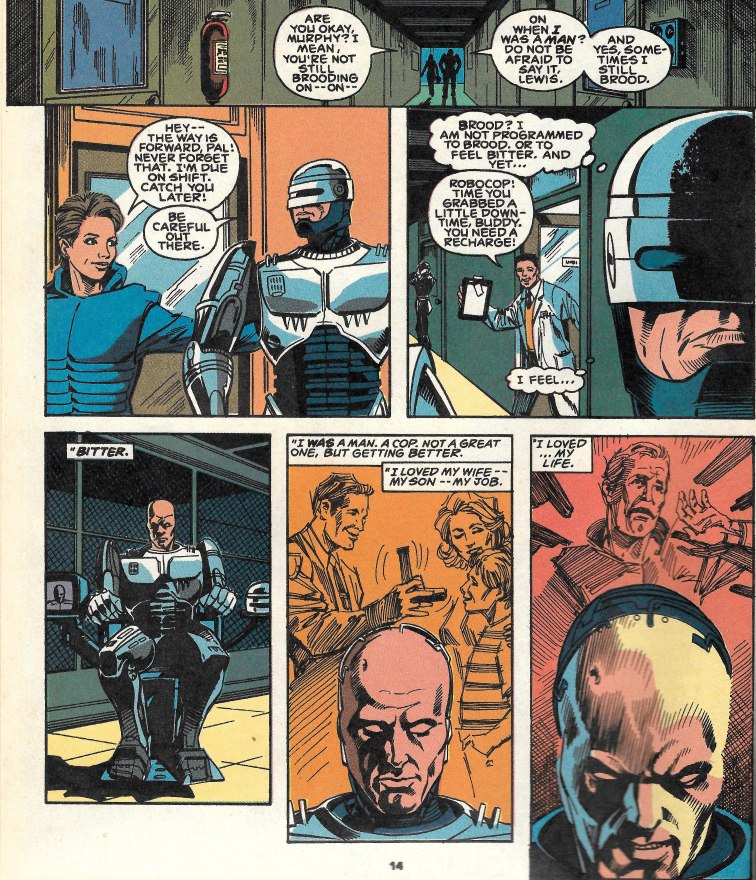 It's good that they have her appear here. And unexpected that we start showing Robocop's origin, which is one of the most violent series of imagery in cinema. They stop short of showing it all, of course, but still. Even alluding to it is kind of ballsy.

While Murphy struggles with his humanity, Nixco struggles with their Robocop replacement project. Stop me if you've heard this one before: Automated gun-toting robots. Yup. They are going the old "ED-209" route with predictable results. 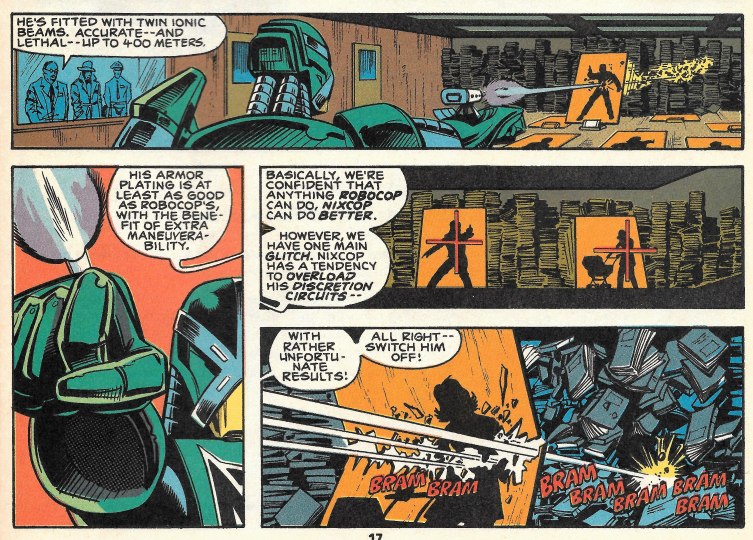 That won't be going into production anytime soon.

Or will it? Seems our cameraman is Dek Kyng, a sleazy fight promoter who is acting as house for bets placed on the fixed fights. He was capturing video of Murphy's moves so the techs at Nixco could program the Nixco-cops to anticipate (and possibly remove) Robocop from action. Then Nixco would be the only protection racket in town. Looks like Kyng's getting the old double-cross, however. 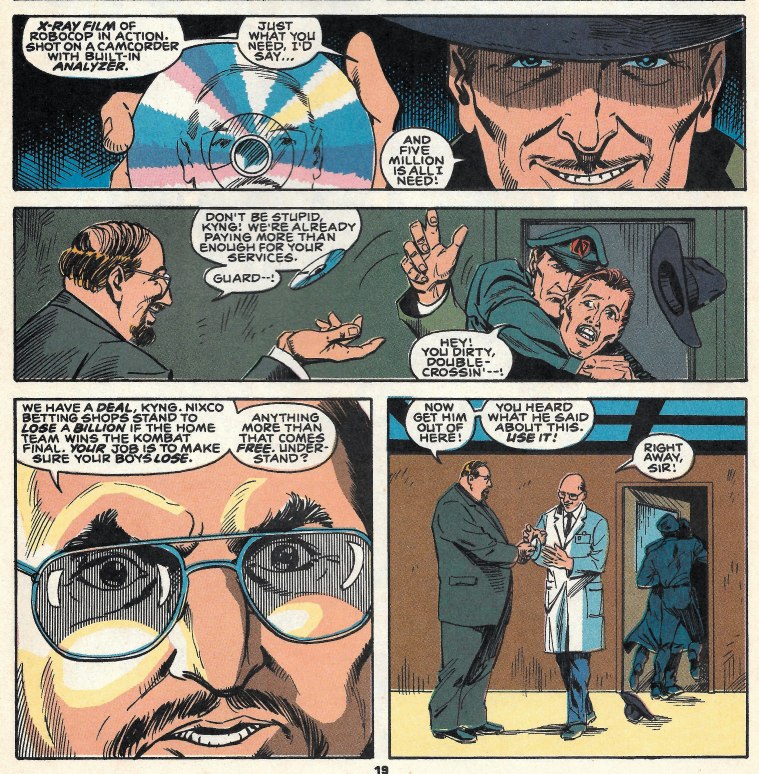 At least he's not dead

It looks like the information he was pedaling was good though, just what these gentlemen needed to make the Nixcops able to take on Murphy. 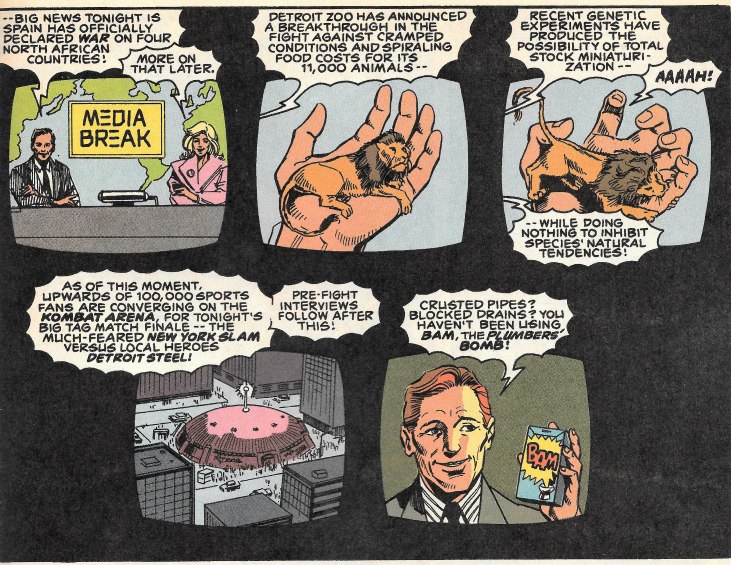 Robocop is waiting at the Kombat arena to take in Kyng for questioning. Our transition to this setting is another set of newscasts which I couldn't resist including. Then we are off to the fights as Kyng avoids Robocop by hiding in the ring. Looks like Murphy will have to show these clowns who is in charge. 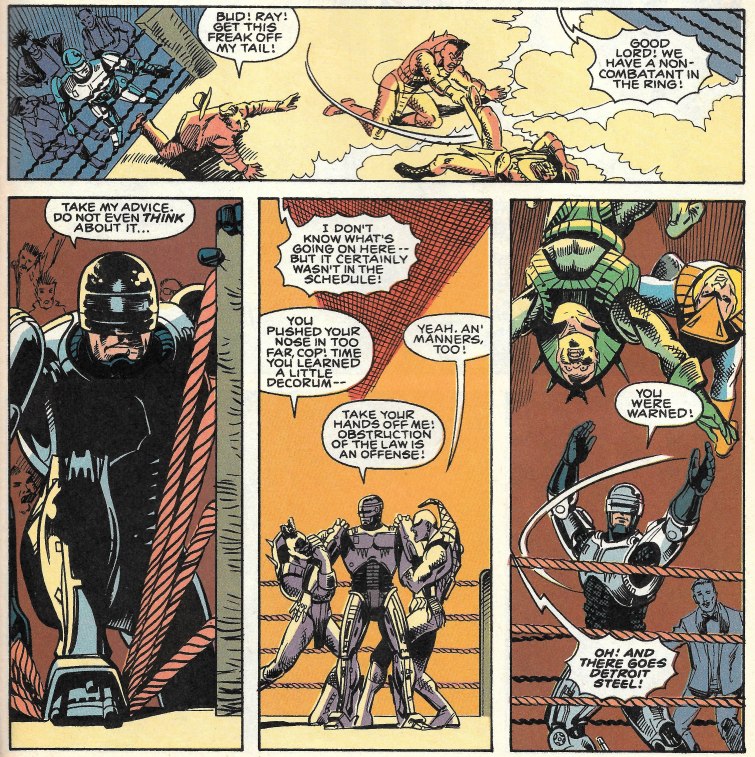 There goes Detroit Steel, blasting off again….(sorry, still possibly too much Pokemon Go playing). Anyway he makes short work of them. So we bring up the B-team. 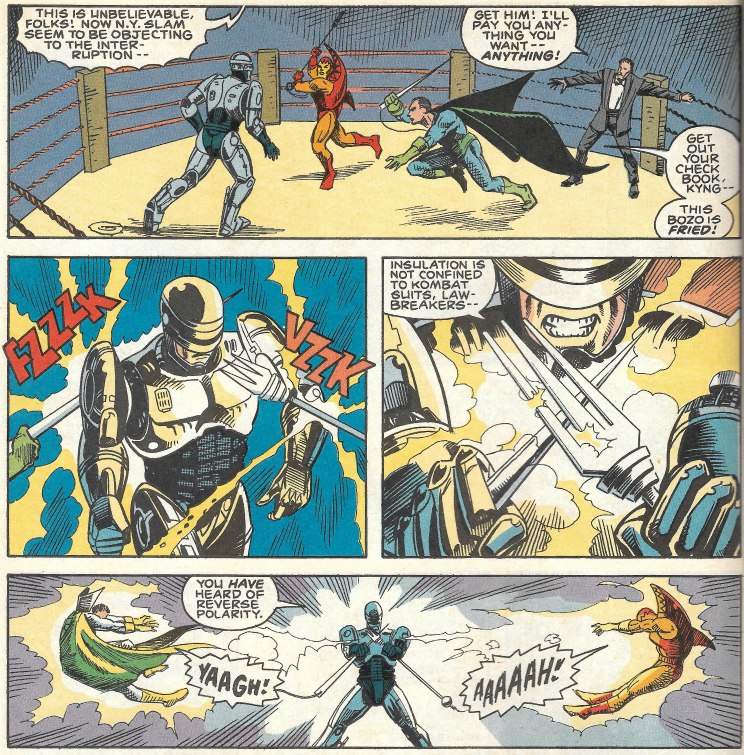 Shocking finale to this match. They all would be dead, but I digress. So Robo is free to drag Kyng's unconscious body out of the arena. This doesn't go over so well with the Nixco's head Mr. Darkstone. 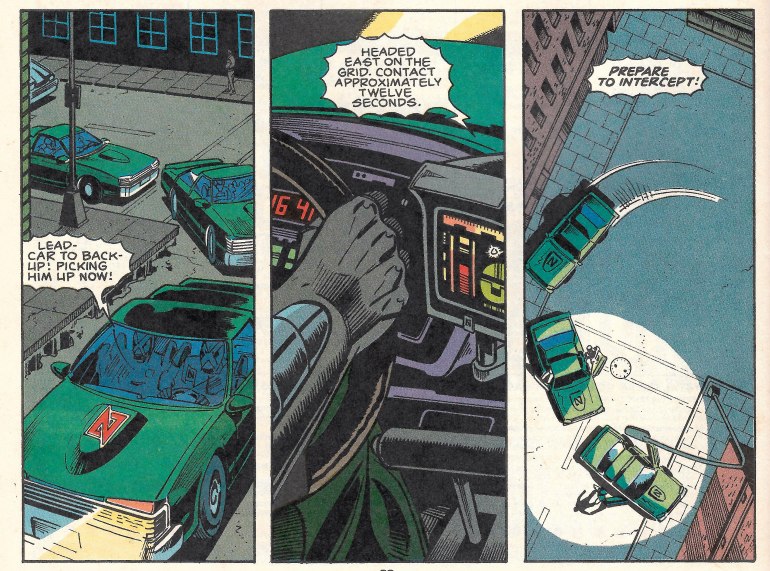 Worried that Kyng will talk, he loses the Nixcops to take care of Kyng and Robocop. 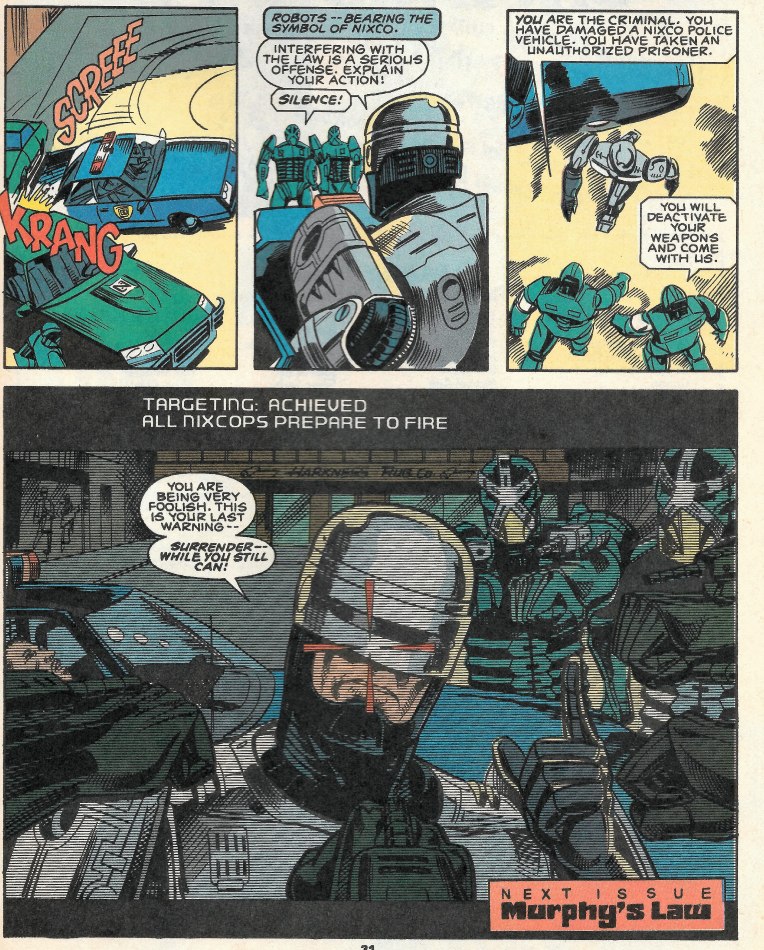 So surrounded on all sides, we leave this one to be continued next issue.

Sadly the series was short lived, lasting only 23 issues plus two movie adaptations. Afterwards the property bounced from Marvel over to Dark Horse then on to Avatar only to move to Dynamite finally ending at Boom!...heck, that's pretty much every company having a go at it. Most of these I haven't seen or only seen a few pages of, so the less I comment, the better. I do believe they will wind up in my hot little hands though as each had tiny print runs.

As for what the future holds? Who knows? I hope no more remakes or reboots or retooling. The original should get annual screenings, in my opinion. I'd love to revisit old Detroit once a year and watch Murphy take down those same bad guys again.
Posted by SonOfCthulhu at 5:15 AM