Guide to Werewolves, Part III: The Sword of Solomon Kane #2 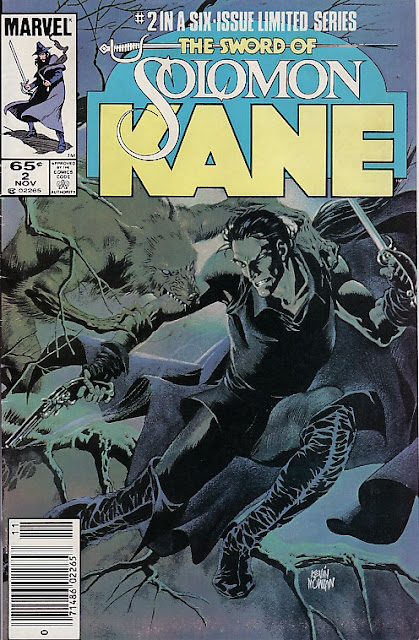 Robert E. Howard created the character Solomon Kane in a 1928 story for Weird Tales called Red Shadows. Howard is the legendary creator of the barbarian warriors Conan, Red Sonja and Kull. He cut Kane from a different cloth, however. Kane is a 16th century Puritan whose wanderings through Europe and Africa often lead to adventures thwarting supernatural evil. Puritans were separatists from the Church of England who wanted specific reforms. Oddly enough the term “Puritan” was used only as an insult by the church to refer to these religious rebels, who preferred to call themselves “the godly”. Neither Howard nor Sword of Solomon Kane’s scripter Ralph Macchio aspire to this level of historical accuracy. I’m very glad too, as it would slow down this werewolf horror tale gobs if we digressed into the exact theological underpinnings of the reformation or the Church of England’s position as a political vehicle vs religious institution. Instead we get a very straight forward adventure story that ends with a bit of heavy-handed proselytism.

Project Australia’s A-Npage - Hit "H" and scroll down for Robert E. Howard and you'll find all the source material on Solomon Kane, plus other great Howard stories.


Let’s start with the good part, Howerd’s Kane character doing what he does best. Here he is saving the life of a teenaged boy who’s run afoul of a man-like wolf creature. This sequence takes place on page 2 of the book, so you can tell that Macchio and artist Bret Blevins are wasting no time in bringing us the action. 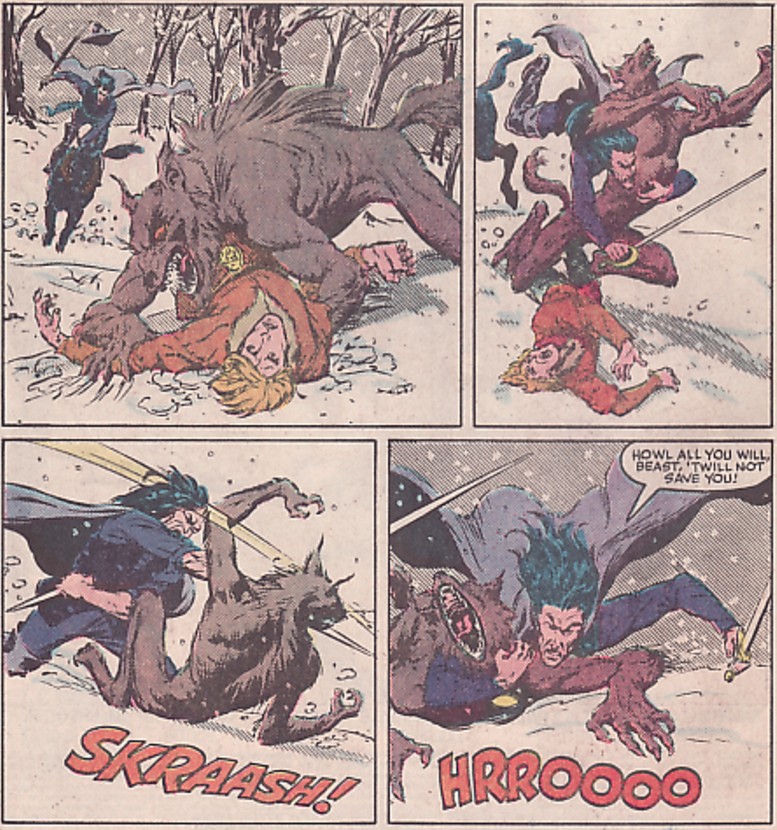 Solomon proves the werewolf’s better, saving the boy’s life and ending the creature’s. Call me old fashioned, but this level of gore is more acceptable to me.

Note that Marvel’s werewolves, while they may bleed profusely, do not drench the pages in entrails. Nor do they explode like a gerbil microwaved for more than 2 minutes…er, so I’ve heard. The wounded boy runs off while Solomon makes the startling discovery that the wolf’s body has turned into that of a naked man. He also finds a strange looking amulet near the corpse, which he pockets as a “mystery I shall ponder anon…” and proceeds to bury the dead body. Meanwhile a strange cloaked figure makes his way into the local inn, startling the locals. 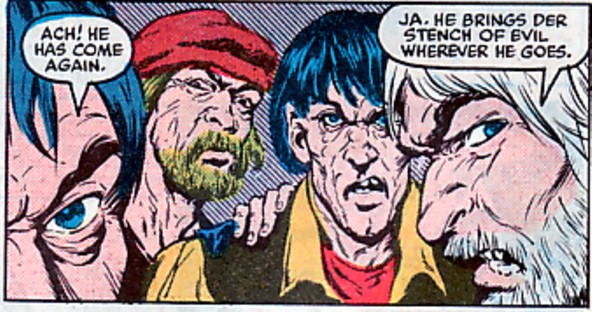 Maybe this guy should bathe a bit more? Anyway, stinky turns out not to be Solomon, but Solomon’s old pal Nathan Cabel. Nathan is hated by the locals not only because he is a fellow Puritan, but also because his current wife is a voodoo-magic potion brewing witch with a brother who’s a werewolf. I’m getting a bit ahead of the story here. Right at this point Solomon steps in and prevents a burly peasant from battering Nathan senseless. Nathan is genuinely surprised to see Solomon. 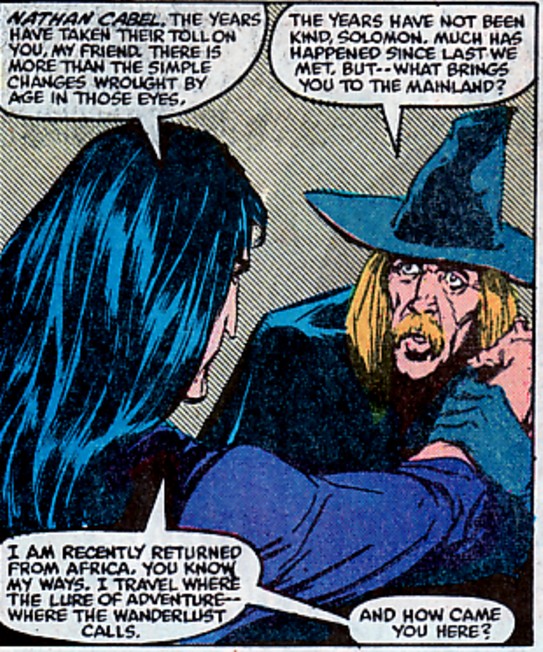 Actually Solomon travels take him anywhere the credit collection agencies can’t find him. Also he seldom leaves a forwarding address. But enough about him, it’s time to hear Nathan’s sob story. Seems a Bronte novel’s worth of hardship has befallen him since that last time he met up with Big Daddy Kane. He was injured in a war with Germany, nursed back to health by a local gypsy woman, returned home to find his wife bedridden and dying with his young son grieving at her bedside, took his wife and son back with him to Germany via a long ship voyage to find the same young gypsy woman who healed him, found her but was too late to save his wife, upon her deathbed he cursed and renounced God for letting his wife die, and then he married Martha the gypsy woman while settling in Germany as a simple farmer. The End.

Expected the book to be over? That was 2 pages worth of flashbacks. Man, they packed in the story back in the 80’s. Solomon agrees to be his houseguest for the time being and they head back to Nathan’s cabin. Once they arrive, they find Martha handing out a magic cure to one of the locals. I really expected Solomon to go kind of ape-shit on her, but instead we get this. 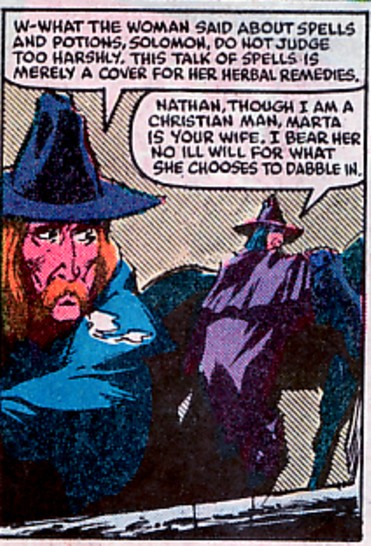 What Solomon doesn’t know is that what Nathan’s wife dabbles in involves pouring fruit-flavored yogurt on their house guest’s privates while they sleep. Solomon recounts his fight with the werewolf and the fact that it dropped an odd amulet after it died. Martha seems to recognize it and asks to keep it. About this time Nathan’s son, dead meat…er Justin bursts into the cabin and we make a startling discovery. 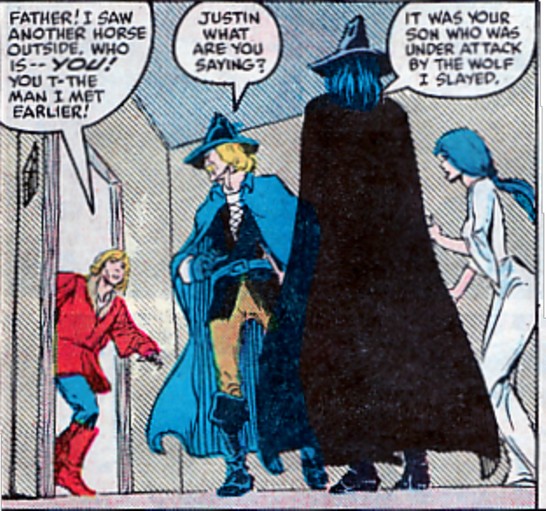 Justin was the one Solomon saved from being killed by the werewolf. Unfortunately Justin was injured in the fight with the beast which will mean he has inherited the curse of the werewolf. In secret, Martha matches the amulet Solomon brought in, muttering something about “let it not be him.” We later learn that Martha’s brother was a werewolf searching for a cure and this confirms that he’s dead. Meanwhile Solomon and Justin get pretty chummy. Justin turns out to almost idolize Kane, not that he does anything to discourage him. 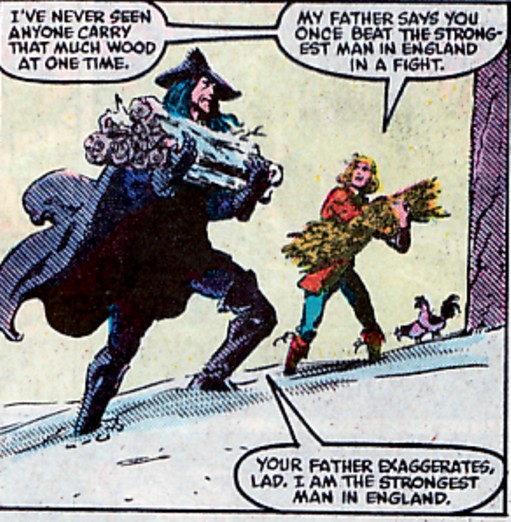 I’m thinking Solomon needs a refresher course on the seven deadly sins concentrating on #3, pride. Sadly, Justin and Solomon’s status as BFFs is soon to come to an end. The first full moon causes Justin to change into a raging werebeast. 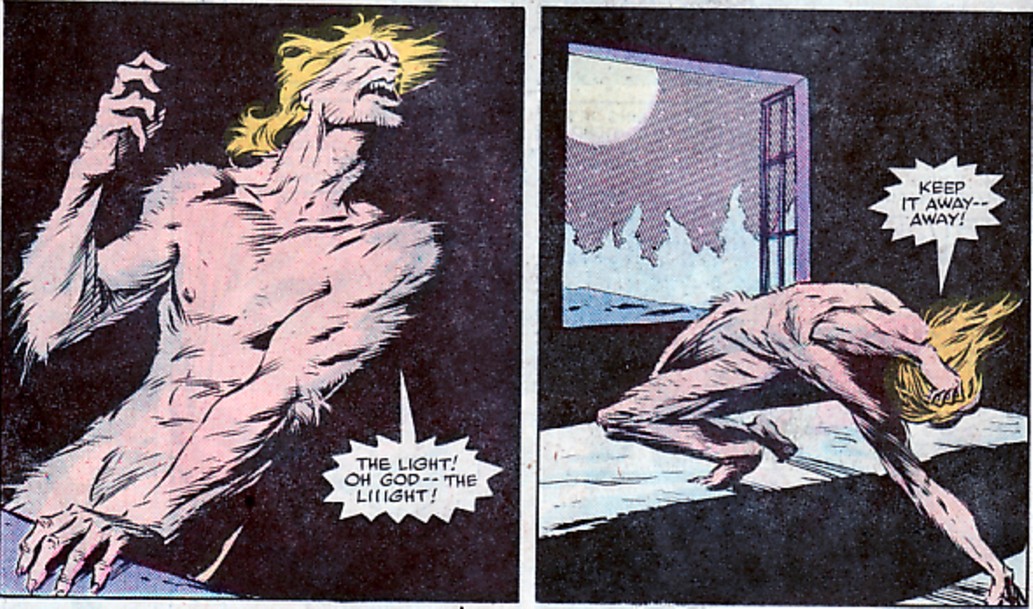 I haven’t seen that bad a reaction to light since the last time Michael Jackson made a public appearance. Justin munches through a few town folk, night watchmen, a couple of horses and one drunk lying in the gutter. Guess he was just a bit peckish. Solomon finds the animal prints leading to Justin’s window and when Nathan brings news from the village, he quickly puts two and two together. 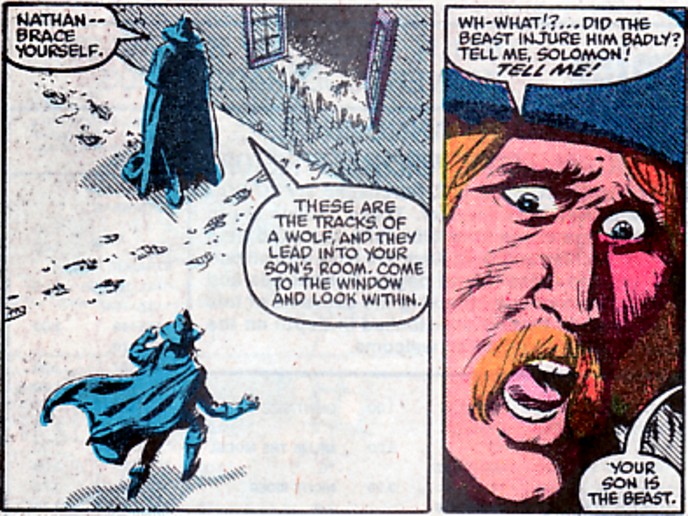 That’s more like it. Nathan freaks out for a bit. When Justin is told what he’s done, he freaks out for a bit. Solomon just kind of looks at the kid and says “Fear not, lad. God’s will be done.” Which sounds okay to anyone not in Justin’s shoes. Martha and Nathan attempt to voodoo the werewolf out of him by tying him up with rope and bedsheets while lighting candles and some really cool incense they got on sale from the local head shop. Solomon takes a more direct approach. 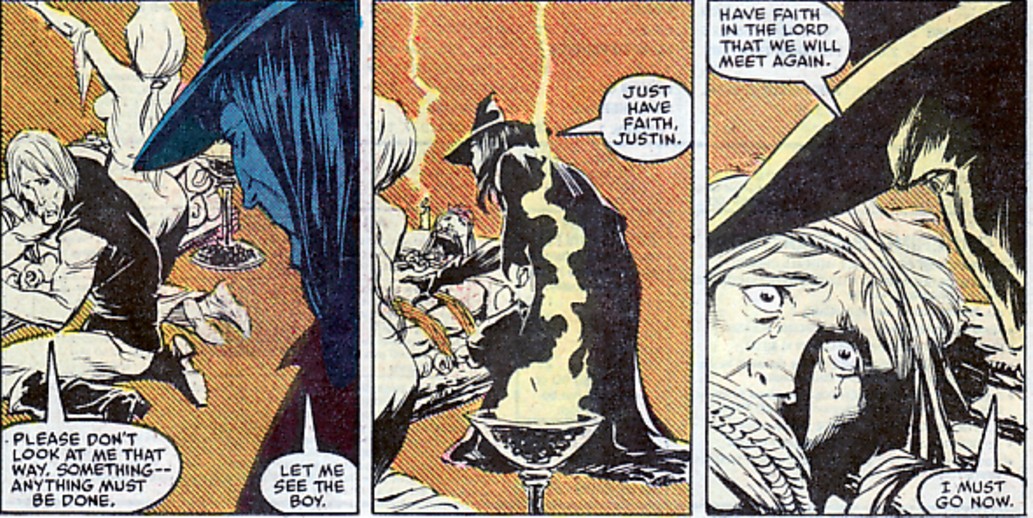 What that means is that Solomon strings silvered wire around the house and waits for Justin to go all “Teen Wolf” so he can stab him through the heart. The fight doesn’t go well, as Martha gets slashed to ribbons and Nathan ends up having to eviscerate his own son. Nathan gets a nice couple of panels pleading Justin’s impaled body not to die and leave him alone.

It’s about this time that Nathan and Solomon start having this odd faith dialogue that seemed so out of place in a mainstream comic. It was almost like some panels from a Bibleman comic had somehow ended up tacked on to the end of the tale. See what I mean here. 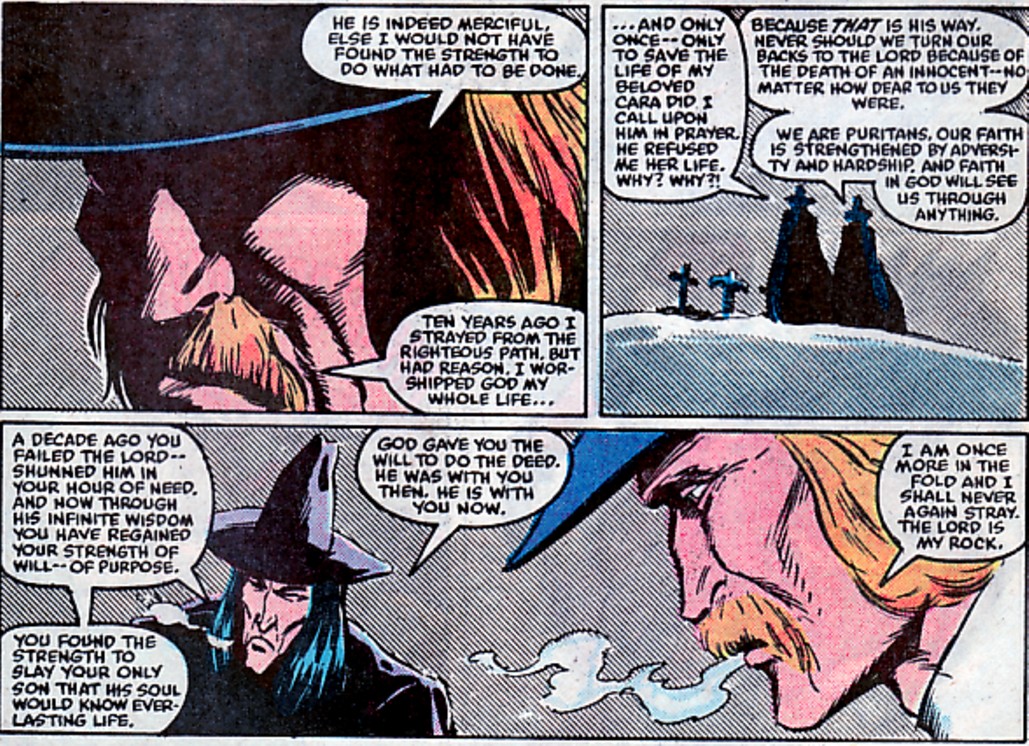 I really, truly expected to turn the page and come face to face with “Nobody else can save you. Trust Jesus Today!” and the Jack Chick four step process to becoming a Christian. I never knew Marvel played religious preferences like this. It’s odd and disconcerting, but I also have to say true to the source material. As for SoSK’s 6 issue limited series, I’m a believer and a big fan. Plus no messy clean-up like I had with Shadow Reavers.

Posted by SonOfCthulhu at 3:17 AM