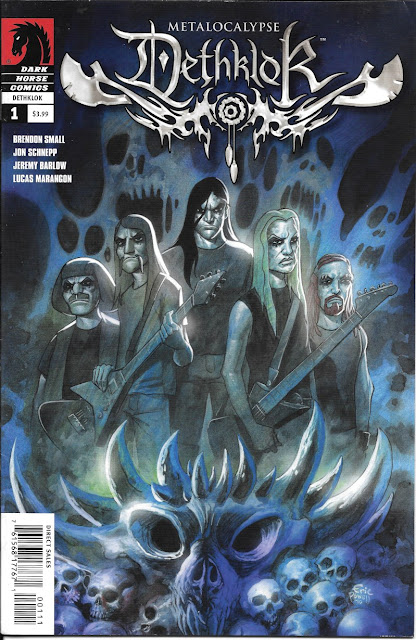 I'd do anything for Dethklok, even buy their comic books*

I'm not a fan of deathmetal.

It is all screaming and overpowered guitar cords and lots of noise to little effect. The singers from most deathmetal groups sound like they are "whisper-shouting" the lyrics. It just doesn't appeal to me.

The satire is so thick that you can't cut it with a black chainsaw powered by the blood of a church choir. A band of misfits who only want to make things more metal. Yeah, it's been done before.

I'm looking at you, Spinal Tap.

But this takes the dial on absurd up to 12 for no reason other than it can. This time the metal band isn't just a popular band but they are so popular that their profits eclipse that of most countries. Their fans aren't just rabid, they would (and do) literally kill themselves by the hundreds every time the band has a concert. And as for the overarching plot, Dethklok is not just a band that plays around with satanic imagery for fun, but are actually unknowingly bringing about the end of all mankind.

That might sound grim. In the hands of anyone other than writer/artist/creative force of Brendon Small and Tommy Blacha it might be. But these two geniuses pull off a miracle when it comes to Metalocalypse Dethklok.

The funny part is that the show is equally watchable by people who love metal as those who don't. The band being absurd stereotypes of heavy metal heroes works so well as satire because it hits so close to home. We can think that someone like William Murderface is a complete psycho loser worth laughing at while at the same time remembering guys we hung with in middle or high school that were just that same level of crazy psycho nutjob.

Or maybe that's just me. But I don’t think so. Dethklok racked up four seasons and a one hour special, which is quite an achievement, even on low-bar Adult Swim. It is a testament that somewhere out there this is resonating with someone.

So picking up Metalocalypse Dethklok #1 when I saw it in the discount bin was a no-brainer. Finding out it was true to the spirit of the TV show made the bargain purchase price feel like I had discovered a gold mine in my backyard. In truth, I believe as an audience your mileage may vary. I hear the voice actors when I read the book, but for those of you unfamiliar with the source material, this may not come across. I think if you watch an episode or two you'll get the gist of what this is putting out there. The link to the Adult Swim page with a handful of free to view episodes is located HERE.

We begin with the framing device that many of the episodes do: entertainment announcer guy filling us in on Dethklok's latest news. This week the band is considering entering the lucrative business of producing frozen TV dinners. This will end well, I'm sure. 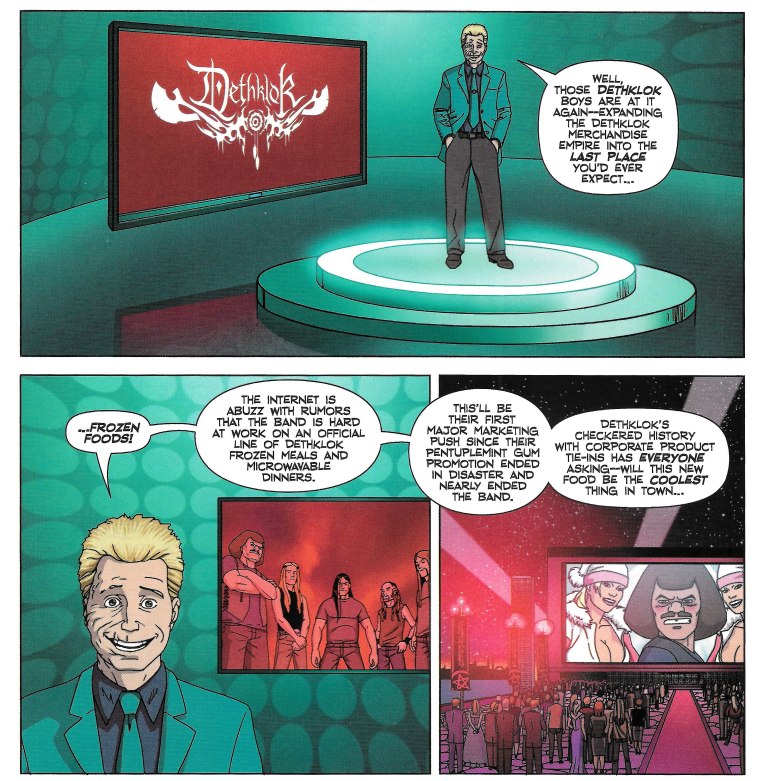 After the standard "…or is Dethklok selling out?" line, we switch to the band meeting with the ever-present manager/lawyer Charles Foster Offdensen. 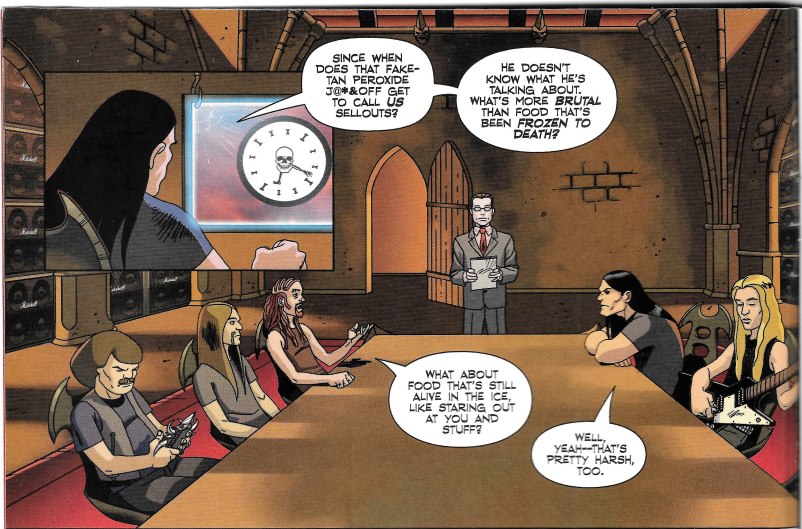 He appears a little concerned that the info on the frozen food line has leaked early. That's when William Murderface spills the beans that he mentioned it on his Chitter (which in-universe is analogous to Twitter). To which Skwisgaar Skwigelf, the lead guitarist has to throw in a comment. 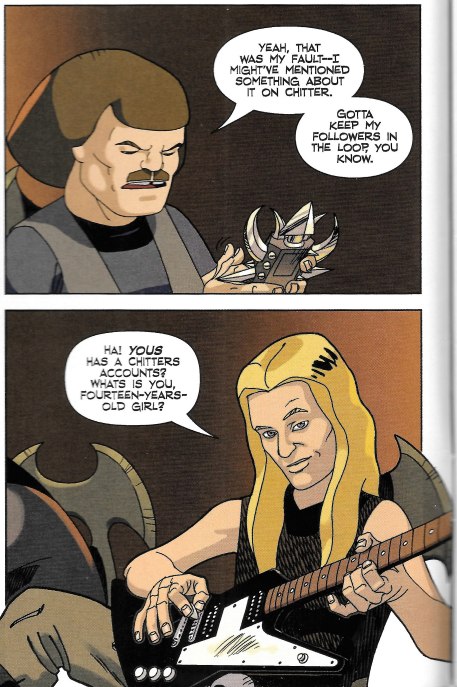 A bit of back and forth ensues after the band determines that Murderface used the name "cock_slapper" as his Chitter username. The conversation goes down to the juvenile level of whether that name is "gay" or not. Murderface also brings up that Toki Wartooth froze his Father alive (an episode of the series that would take far too long to explain) and then turns back to the frozen food suggestions. Offdensen would rather they forgot about helping in that regard entirely. 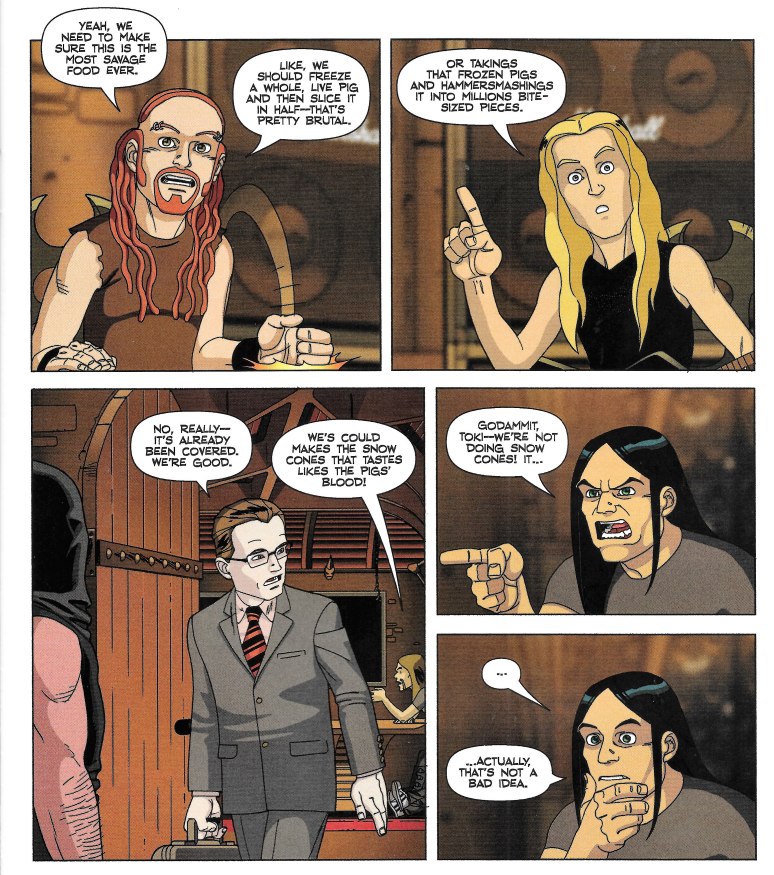 The book then picks up the beats of the show, turning to the council that have mysterious plans for Dethklok. These guys gather every episode in a room with a green light and discuss what Dethklok is doing and how it will destroy the world. The subject of their weekly meeting is also the upcoming frozen food release, but for vastly different reasons. You need to see the Dethklok food labels first. 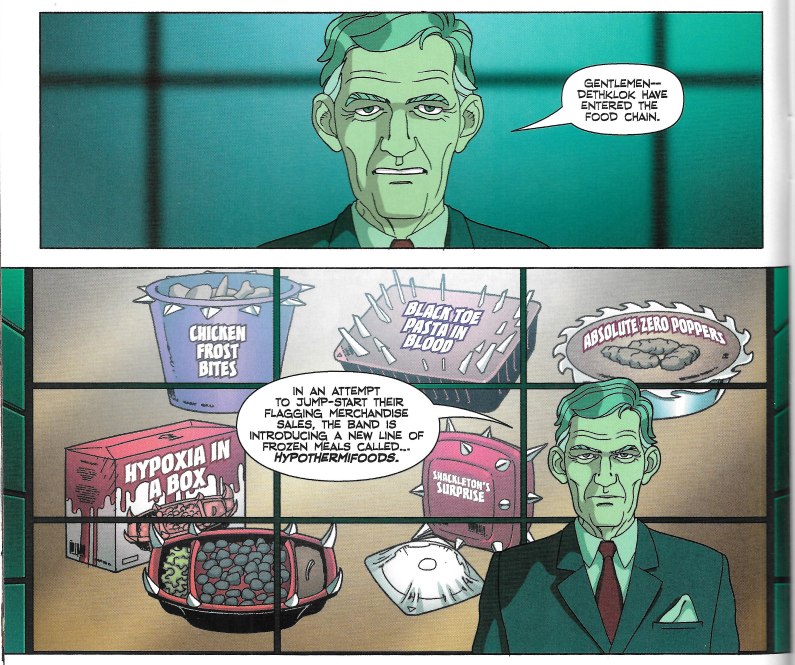 And then hear the explanation of how Dethklok's frozen food will destroy all life on the planet. 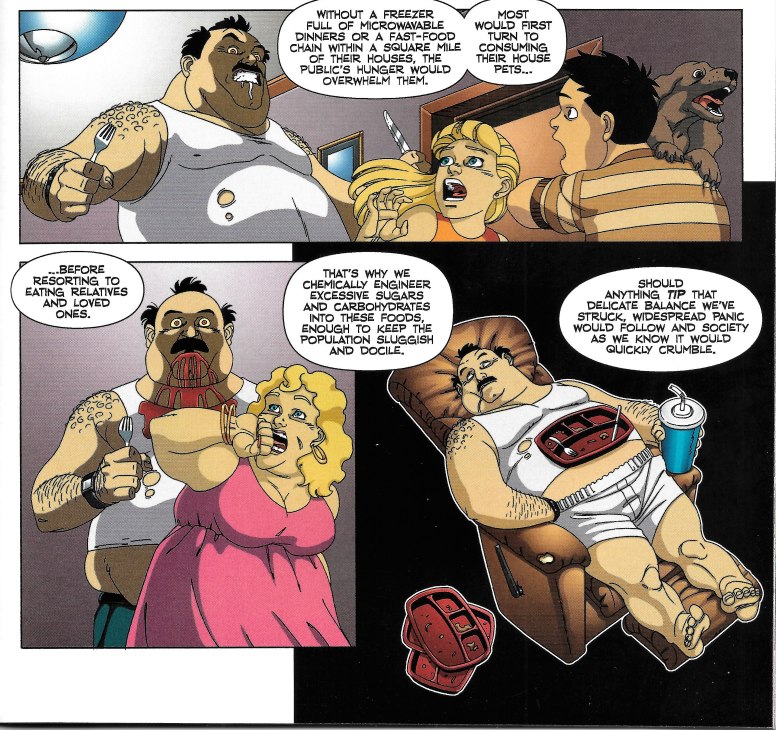 Basically it works like this: We've become so dependent on frozen TV dinners in the Dethklok future that none of us could survive without them. I love bleak humor and Metalocalypse really delivers on that point. 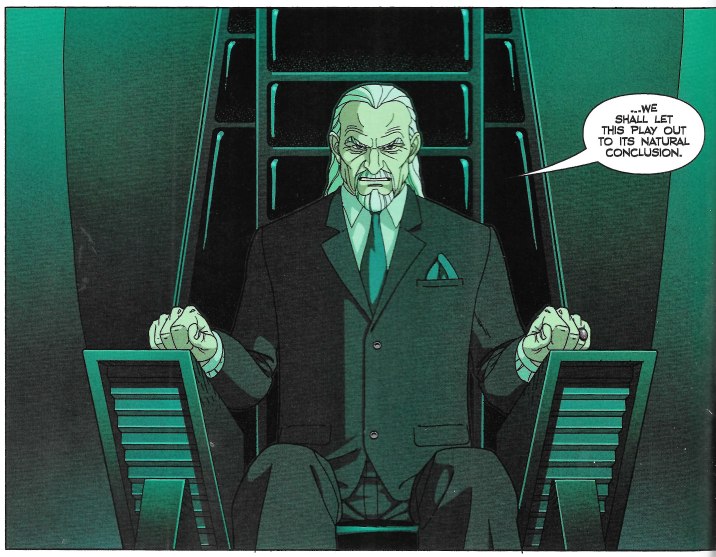 As always, the infamous "half-man" tells everyone that even though Dethklok's meals may mean the end of civilization that they must do nothing to interfere.


Since Toki is still upset about the father comment, Murderface takes him golfing to make up for it. He explains that freezing his father wasn't Toki's fault. 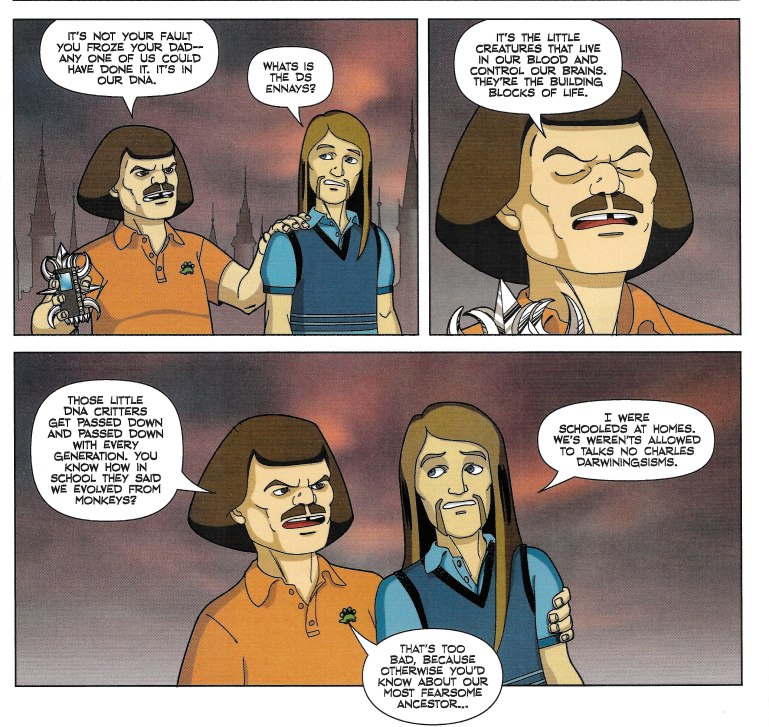 Murderface pulls out this fabricated story that is too good to miss. Seems there's this distant ancestor of man that looks like a Yeti… 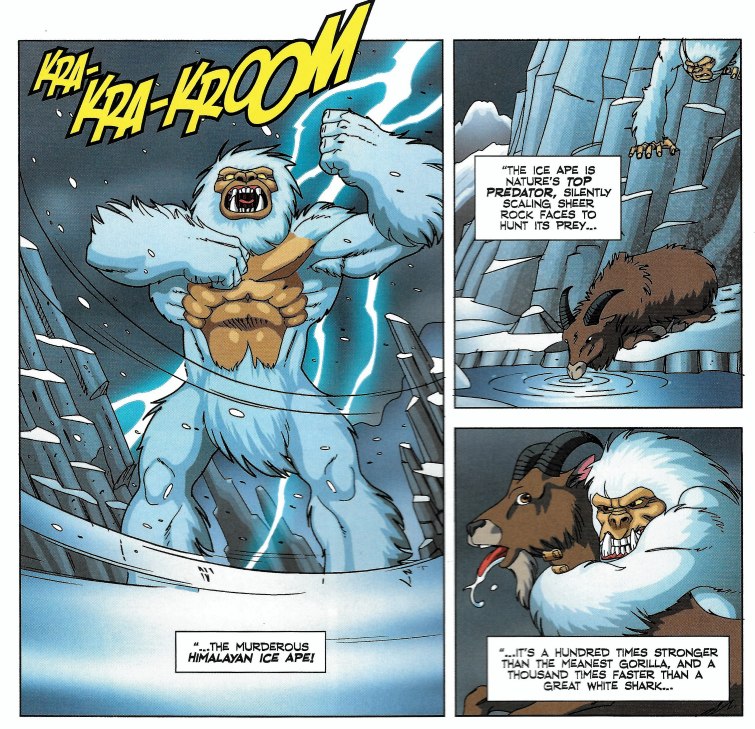 …which is all well and good, even if complete make-believe, but how does it factor into Toki and his ice cube of a dad? Appears the Ice Ape freezes its victims. And then it … 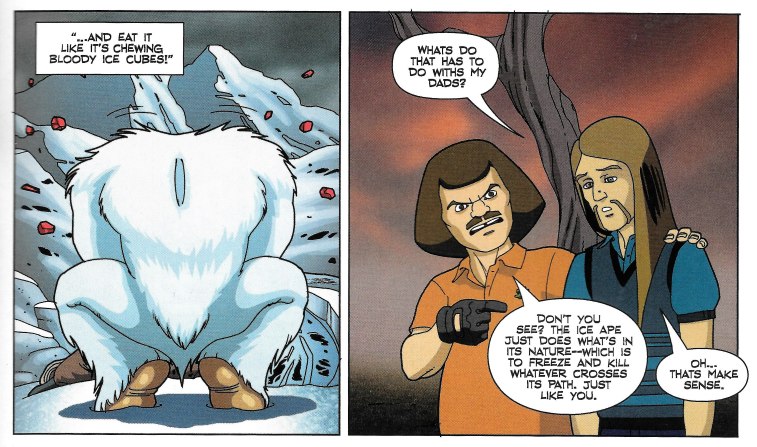 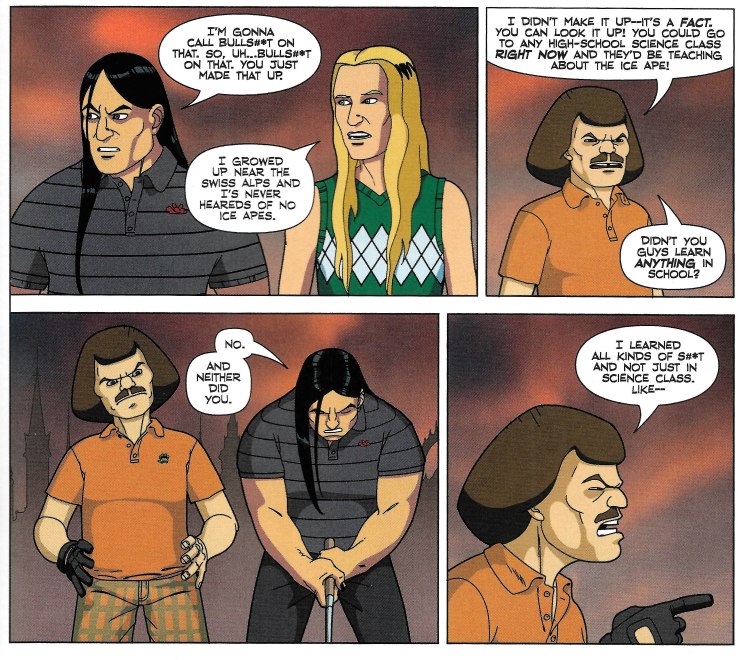 Nathan is so great in both the book and the series. I love his last line. I can hear it resound in my head in that deep, gravel-road voice of his. 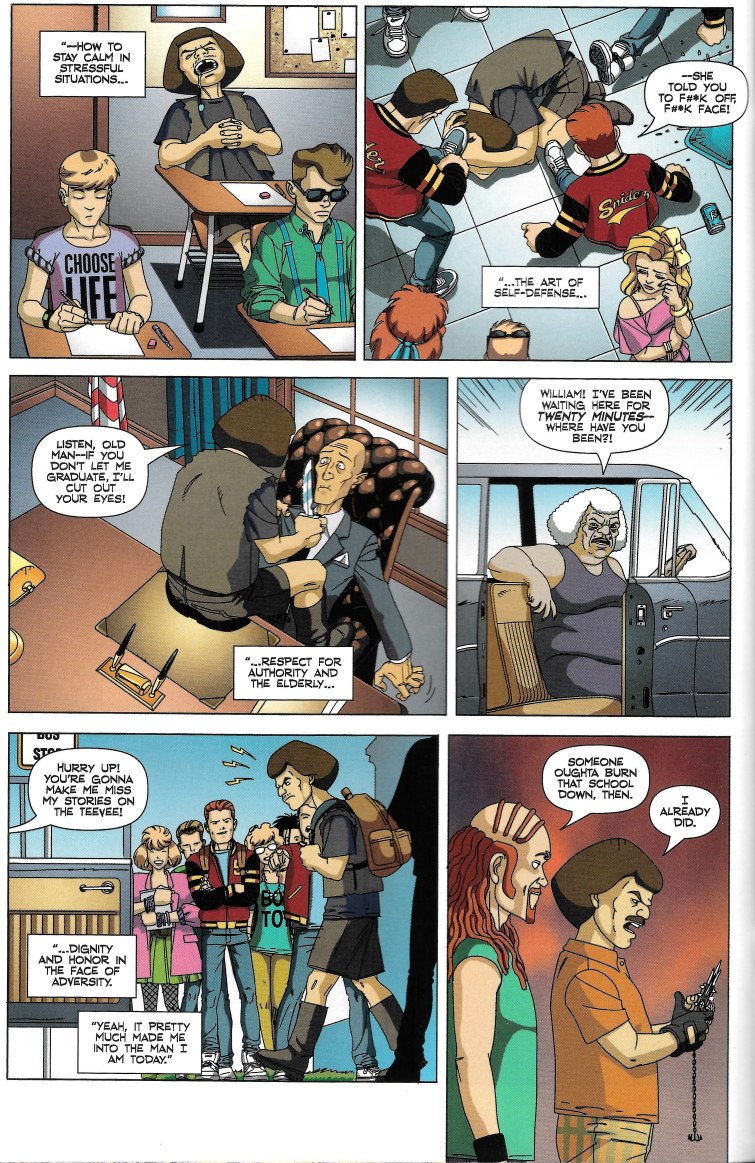 Same thing goes for Murderface at the bottom right of this page. The vibe of the book is the same as the TV show. Kudos all around on this one.


After a brief stop with Dr. Rockzo, the Rock and Roll clown (who does ka-ka-cocaine), we shift back to the news where the frozen food situation is looking grim. 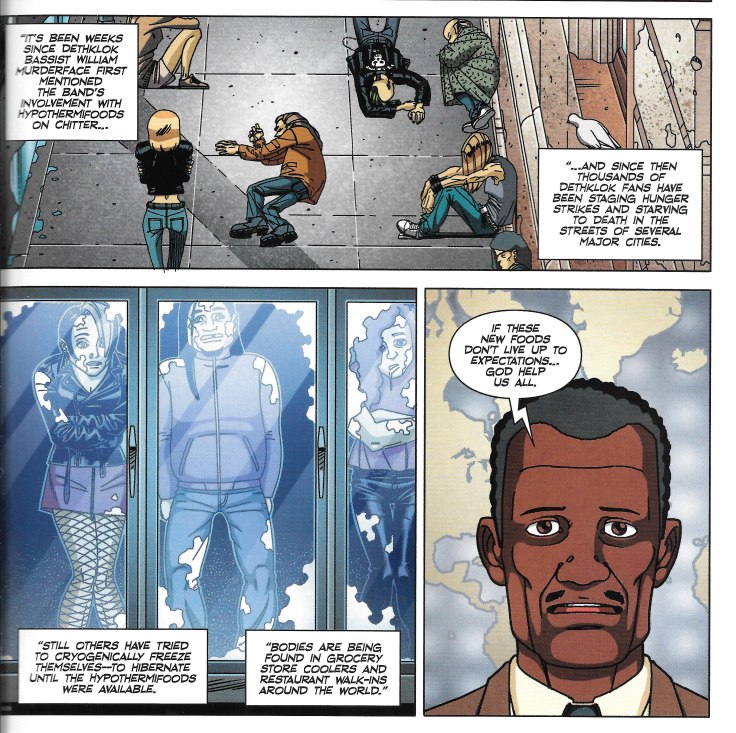 With the food set to debut just days away, Dethklok decides to unveil the product at one of their huge shows. Unfortunately Pickles notices a little problem. 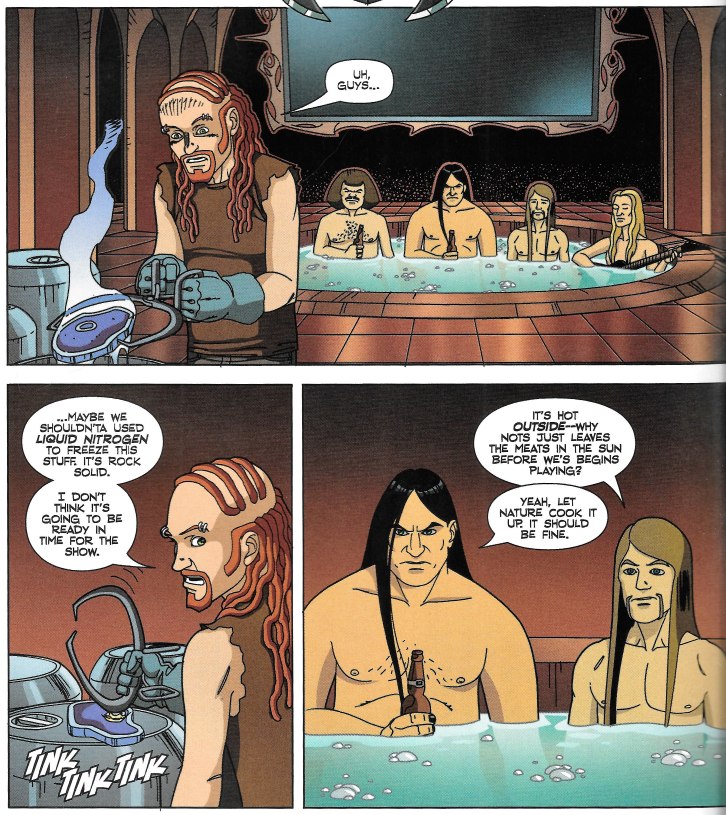 Uh…guys….that doesn't sound like sound food handling practices. But what do I know. Looks like these fans are ready to eat it up. 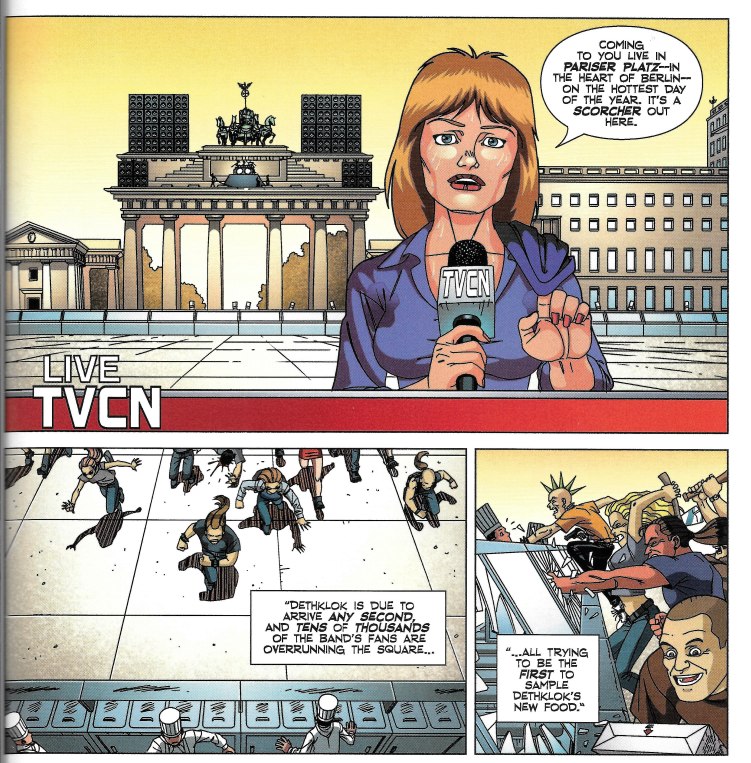 Something tells me this won't end well, and true to form, in the middle of Dethklok's set… 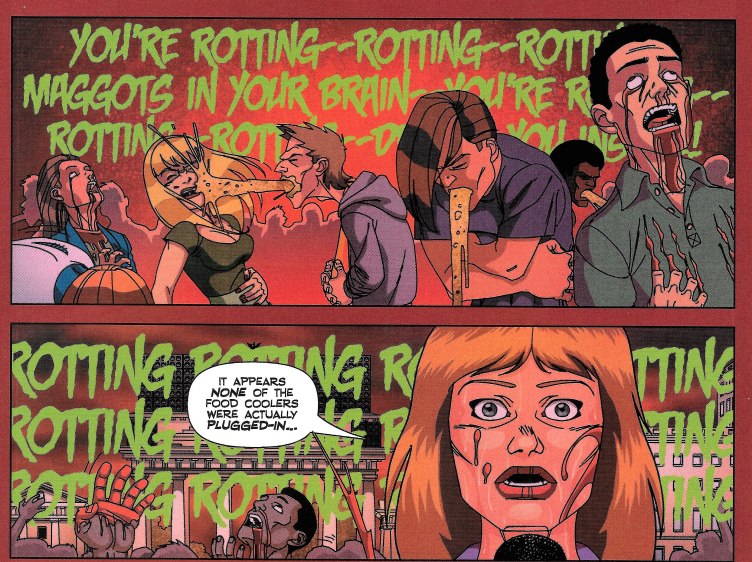 That is brutal. As the group sings on, the crowd dies of food poisoning. You'd almost feel sorry for them, but "people" in the Dethklok universe are so much sheep that you just can't find a care.

I'll let Dethklok's business manager/lawyer get in the last line. 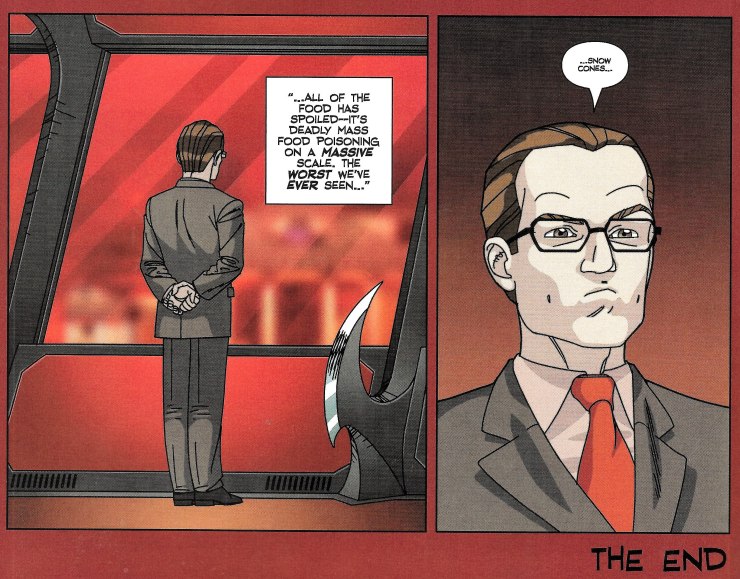 So I loved this. I know, that possibly makes me a horrible sicko, but I do. I loved the TV series too and the just as bloody "Superjail" that followed it (although for vastly different reasons – Superjail was a wonder of animation for its extended dolly-shots). The humor isn't for everyone, but if you liked the show you will quite probably love this mini too.

Posted by SonOfCthulhu at 3:13 AM