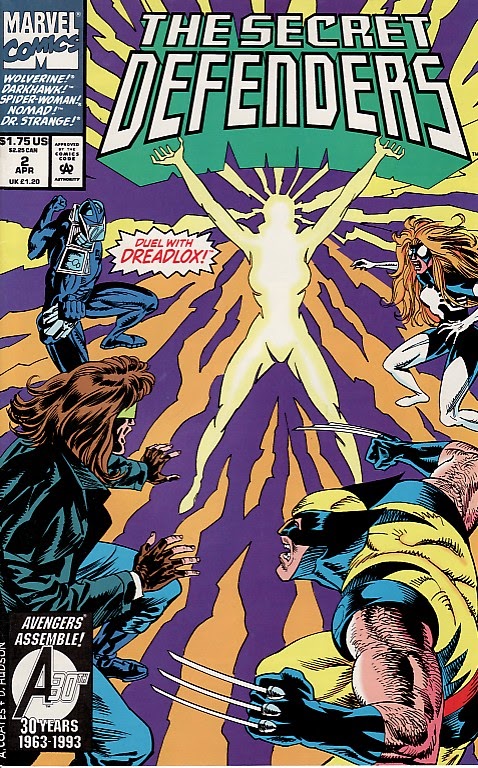 When characters like Wolverine team up with guys like Nomad, it’s easy to tell the "Secret" is cross-promotion.

I have found memories of The Defenders. Not the original band of four (Namor, Hulk, Sub-mariner and Dr. Strange), mind you. But the guys who were calling themselves The Defenders when I got back into comics. They were heroes who had no other place to go, guys whose solo sales wouldn’t support a monthly and/or had been discarded from other team books like so much chattel. My Defender team, the team I remember as “The Defenders” were the ones that carried the mantel from issue 125 until its cancellation in issue 152. These were the “New Defenders” and the team consisted of Nighthawk, Valkyrie, the Gargoyle, and 3/5s of the original X-Men (Beast, Iceman and Angel). So I’m not too picky that Marvel decided to change the lineup when they started “The Secret Defenders.”

What I do find pretty insulting is the blatant attempt at cross-promoting by using a popular character like Wolverine in this series. The setup for The Secret Defenders is to have Dr. Strange call together groups of heroes as he needs them for tasks that he cannot handle. For the first story arc, our team consists of the ever-present Wolverine, SpiderWoman II (Julia Carpenter), Darkhawk, Nomad and Dr. Strange (who’s curiously absent). SpiderWoman had recently been inducted into West Coast Avengers, a magazine that would be nixed the following year. Darkhawk’s own series was only two years underway and would be cancelled due to poor sales in less than two more. Nomad’s title was also on a short leash, ending the very next year as well. So all of these heroes joining Marvel’s number one mutant sales machine before their series are pulled seems a bit of a coincidence, no?

Whatever the reason for the odd grouping, it doesn’t really matter if the resulting story is good. Unfortunately The Secret Defenders misses the boat here as well. Our heroes have been left in Phoenix, Arizona with very vague information on what they are supposed to do. In the last issue, Wolvie and SpiderWoman clobbered two superpowered muscle men. Now this new villain shows up to challenge them. 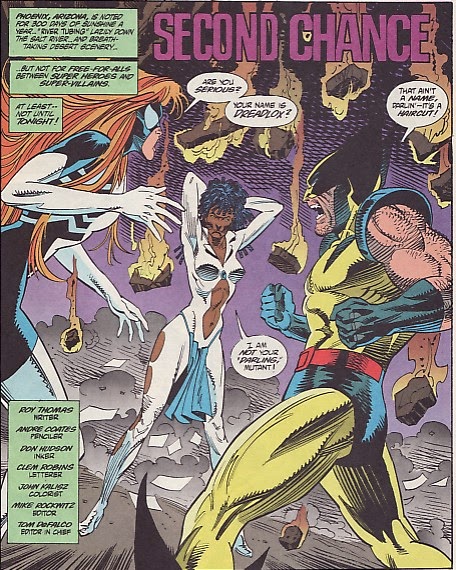 Dreadlox power works like this: when she runs her fingers through her hair she makes people see what they most dread. No, I'm not making that up. For Wolverine it’s carving up his X-Men buddies. For SpiderWoman it’s seeing her daughter die over and over again. Not a bad power, but the fact that she has to touch her hair to use it is really odd. It’s like saying she can only use her power when eating out-of-date bagel spread. (Get it? Dread Lox? No? Never mind).

Dreadlox’s two buddies wake up and they leave SpiderWoman and Wolvie to burn to death in a tenement fire. Before you laugh yourself silly, remember this book was published in the early 90’s. Wolvie hadn’t been overpowered to the point where nothing shy of a long swim in molecular acid would kill him. Burning to death was still a very real possibility. But of course they don’t. Darkhawk and Nomad come across a clue about these new superpowered individuals. Seems they are old bums magically made younger. 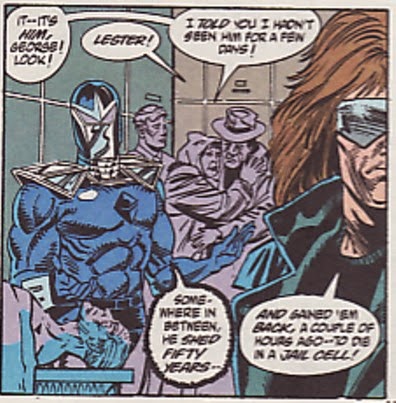 Our team reassembles and compares notes. Bums are turning into youthful supervillains is the only thing they have to go on. So they do the obvious thing, telephone Dr. Strange since none of them are detectives. You’d think Strange would bring on one hero known for critical thinking. No, maybe not. The doctor is out and all Wolvie gets is his answering machine. So he does something totally in character. 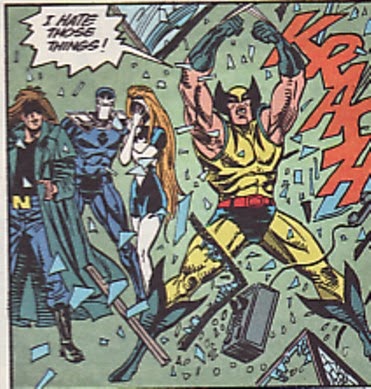 I’d hate to get Wolverine’s order wrong at the drive thru or be the driver who cuts him off on the freeway. I love it when writers make Logan into a lunatic with ginsu knives instead of an actual three dimensional character. It makes him so much more edgy and marketable. So failing to find the doc that way, our none-too-bright band decides to try holding hands and chanting. No, really! And they contact the good Doctor as he is battling Nightmare in another dimension. But Stephen has no time to chit-chat and instantly sends them back. 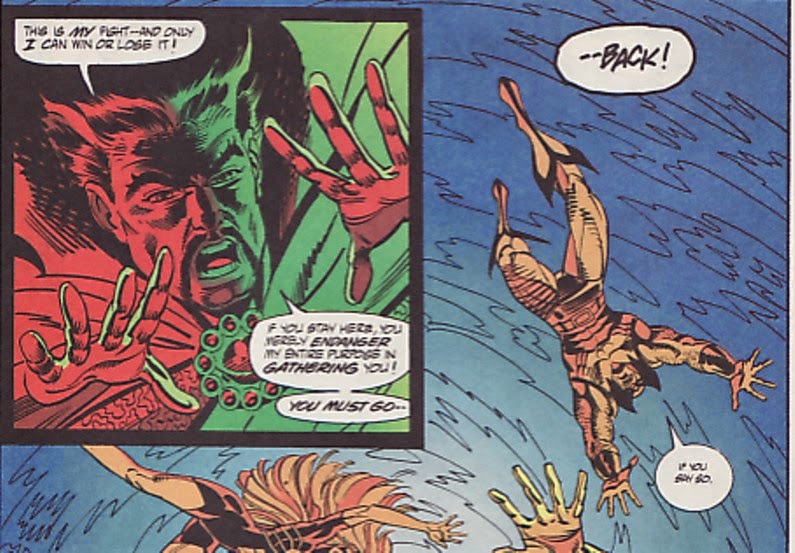 I love Logan’s line here. “If you say so.” I imagine him saying that in a dopey stupid voice. Left to their own devices they are still clueless. Darkhawk finally gets the idea of asking around some of the local bums. Maybe he’s the smart one of the group. He gets a lead. Someone is handing out cards from the “Second Chance Insititute” offering a chance for renewed health and vigor. Darkhawk decides to investigate it alone in his civilian identity. Without telling anyone else on the team. I take back what I said about him being smart. Of course he is captured by Macabre, the leader of this little gathering. Not to fear, even without knowing anything or having a clue what to do, the rest of our band of heroes arrives just in time to save him 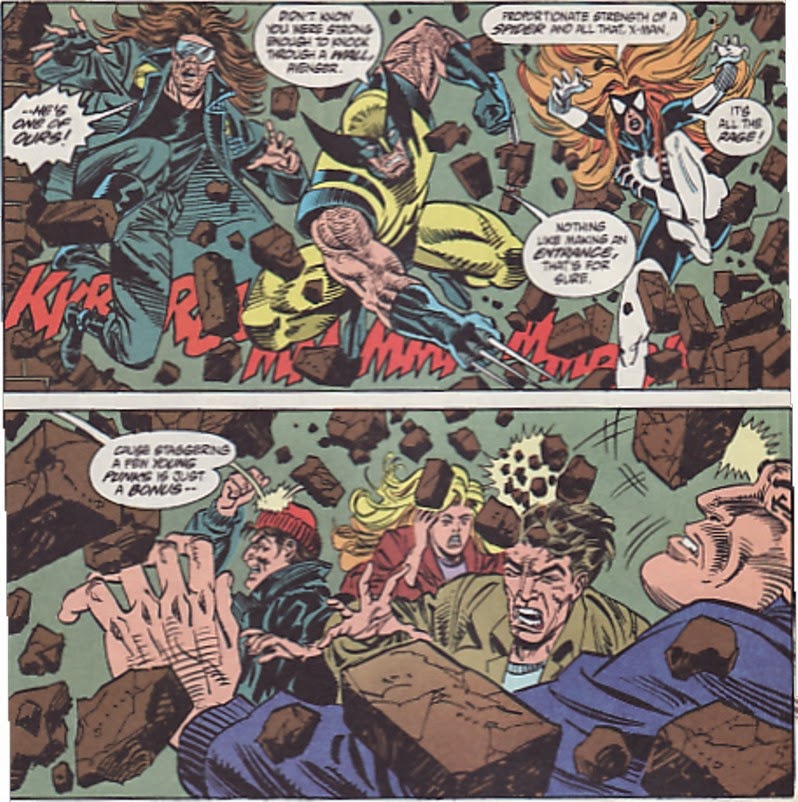 Their spectacular wall-smashing entrance has some unforeseen consequences. On the good side they knock out Dreadlox. But they also slam the crowd of hornswoggled bums with many brick projectiles. I know they may be villain-supporting bystanders at this point, but still you don’t pelt ordinary people with bricks. It’s just bad form, heroes. Macabre issues an ultimatum using Darkhawk and another girl as hostages. 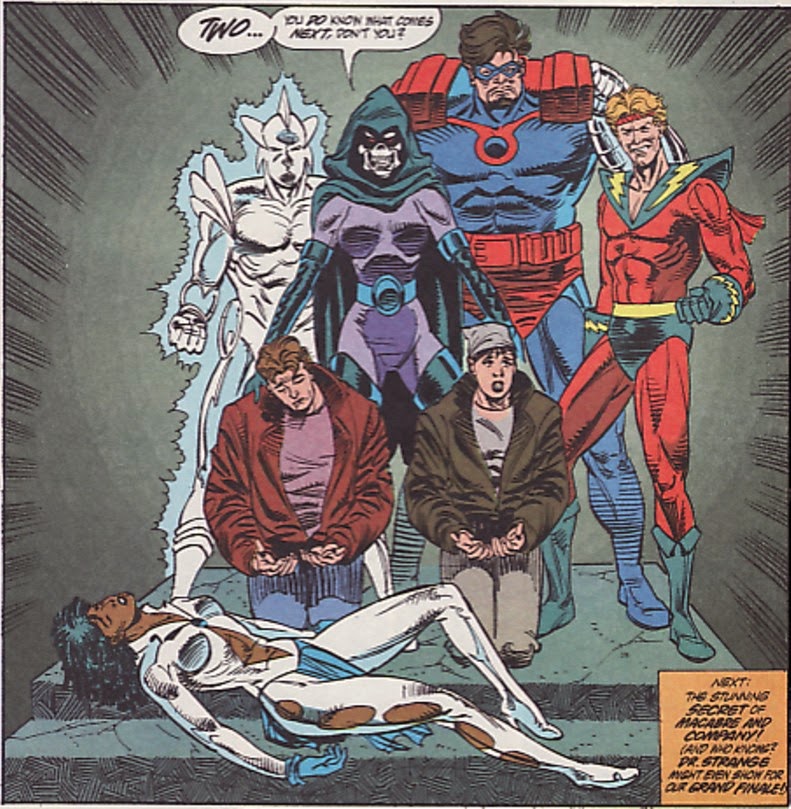 Three? Buckle my shoe? Freddy’s coming for you? This book of wannabe’s doesn’t hold a candle to the original Defenders, or even my New Defenders, nor was it a success at promoting these characters solo titles, Wolverine's not withstanding.The more secret we keep these Defenders, the better.
Posted by SonOfCthulhu at 1:06 PM