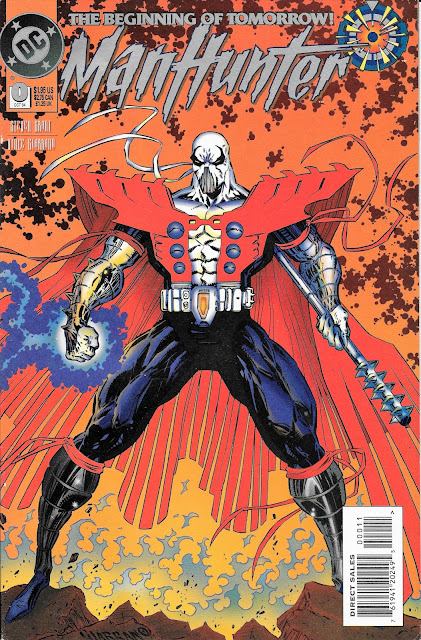 If a hero you've never heard of changes, does it make a difference?


Maybe I underestimate my audience.

This is one horrible change that I don't think anyone will remember. Manhunter was never a top tier character. 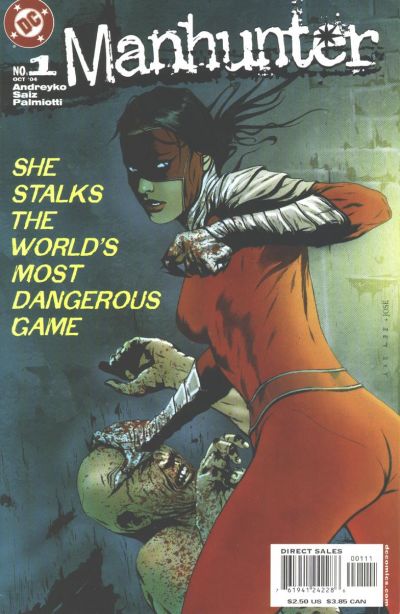 I think the Manhunter that most folks would know is Kate Spenser, a lawyer who decides to take justice in her own hands by cobbling together an outfit made from a grabbag of heroes leftover gadgets. She goes after those who have escaped the court system on technicalities. While her 2004 unlimited series was canceled back in 2006, it pulled in enough fan support to get a second chance in 2007 but still shuttered in 2008, a mere 38 issues in.

She comes after this version, however.

Before this 1994 Zero Hour tie-in series began, Manhunter was associated with one of two versions that were pretty much the same. 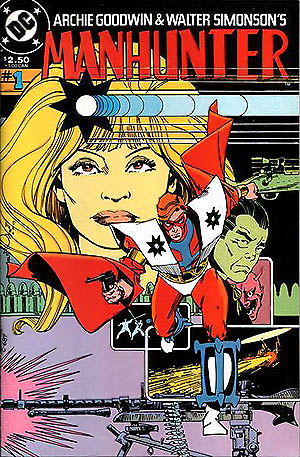 The more popular Archie Goodwin and Walt Simonson's update of the golden age crimefighter who used weapons to take down bad guys. This was Paul Kirk, a resurrected lawman who worked for a secret organization. He used a pistol, throwing stars and a katar to fight crime, encountering Gotham's Batman in a few tales. He bounced around a bit in the early to mid-70's and then dropped off the radar. 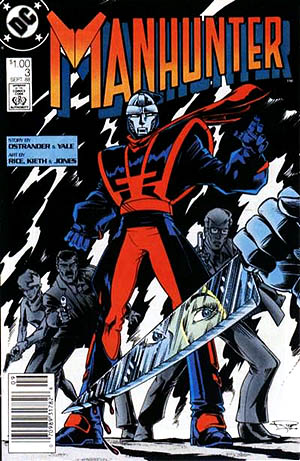 The character reemerged in 1988 prior to DC's Millennium event. In the most confusing of setups, Manhunters are the name of the Guardians of OA's first attempt at policing the galaxy. They were androids who appeared human. Soon they turned evil and the Guardians drove them into hiding, replacing them with the Green Lantern Corps. It was these evil robot/androids who drafted a young man by the name of Mark Shaw to help them sway Earth's heroic population to their side of the battle. Mark eventually turned on his masters and adopted a different identity.

Both of the above were non-powered humans and both carried the mantle of Manhunter. Then the 90's happened and DC was in a tizzy.

Image comics was likely the big driver here. Since it burst on to the scene in 1992, it created a huge buzz in the customer base and it drained talent from both of the big two. By 1994, DC had a sales strategy that it hoped would win it back customers. Along with mucking up the big names, DC started revamping the minor characters. Remember that it was at this time Dr. Fate dropped his doctorate and became "magic Cable."

As for the non-powered, crimefighter Manhunter? He became Spawn.

Spawn's whole premise is that the character dies and then, through a deal with a demon, is bought back to life with very loosely defined power set and a mission that requires him to send evil souls to hell. The demon is the one who names him Spawn.

You're about to see how DC gets away with ripping this off completely. Let's start with a typical Spawn setup. A record-producer guy is found dead with his chest ripped open in a car crash that takes place in a bad neighborhood. Ruthless street toughs are looting his car when they come across something that peaks their interest.

That's right! A hot shoe means a hot chick. And she is beating feet away from the scene. While the mean looking guys chase her, yelling for her to stop, she trips. That's when this demonic looking guy jumps the gentlemen tailing her. 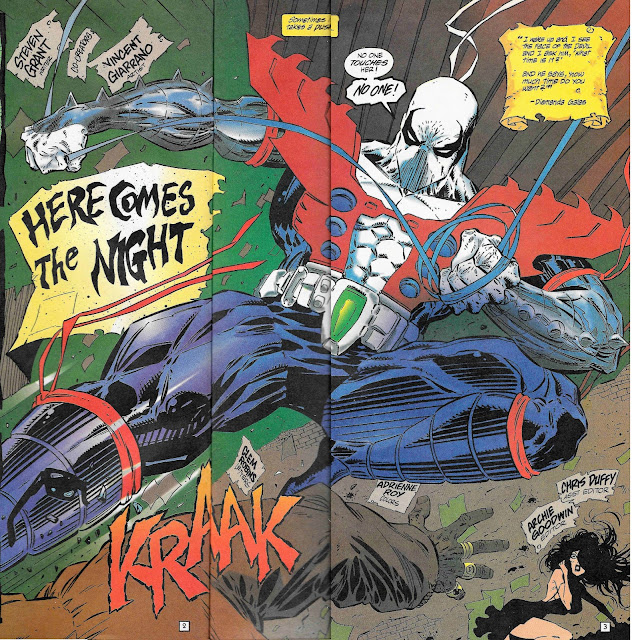 If any of that has a familiar look, it's because the artist is none other than Vincent Giarrano, who would one day write/pencil that crapbox favorite  undead ninja vs demon tale called Redblade. His current paintings are still going gangbusters and he recently won an award for his piece "Tribeca" from The Butler Institute of American Art.

He shows off all his strengths here. Same sense of visual storytelling style, same presence in his figures and pacing. In all, it is a good marriage for this material. The words and story to our pictures are provided courtesy of Steven Grant, a guy I know from First Comic's Psychoblast and the Lobo limited series that pop up once in a while in the Crapbox. Grant is better known for writing the first Punisher mini, Whisper, a handful of Defenders and helping co-write Marvel's Contest of Champions. Grant also penned work outside of comics including several Hardy Boys and Tom Swift books under pseudonyms.

Getting back to the work at hand, Manhunter beats up a few of the tough guys and then sees to the young lady. He knows her name is Brenna. She witnessed the producer getting his heart ripped out and it has completely unsettled her. Apparently, Manhunter knows the young lady personally. She was a singer that the dead guy represented. 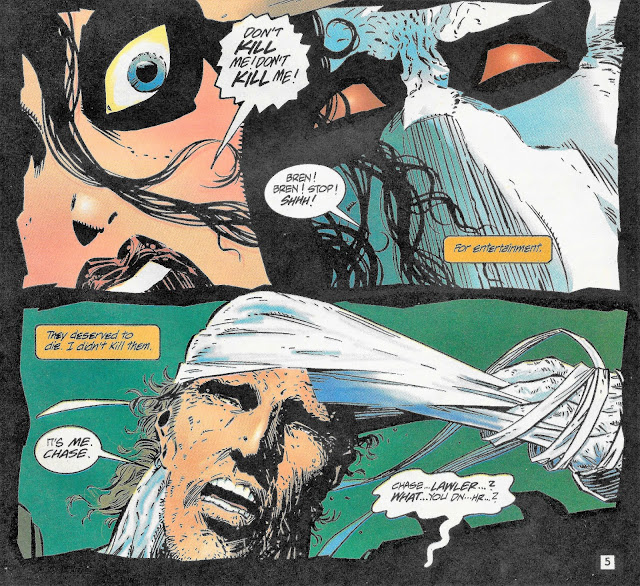 Everybody, meet Chase Lawler. Although you don't know it now, Chase is a musician friend of Brenna, who through mysterious circumstances now has a rather ill-defined set of superpowers. More on that in a bit. 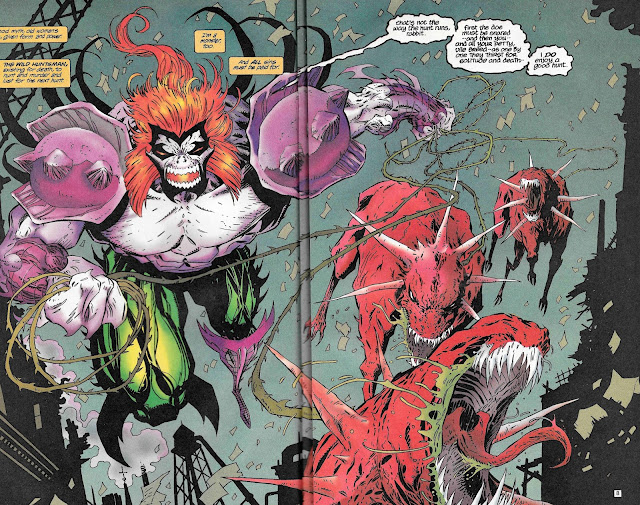 Right now though, they've got trouble coming. Trouble in the form of this guy on this huge two page spread. Meet the Wild Huntsman, a demon-like creature who preys on the souls of the lonely and abandoned. It appears he knows Chase too.

The street toughs turn out to be sympathic characters, and who wouldn't be humanized once the book turns up the heat by sprinkling in demon dogs and monstrous men? First they rush off to an abandoned apartment building leaving chase to face down this new foe alone. 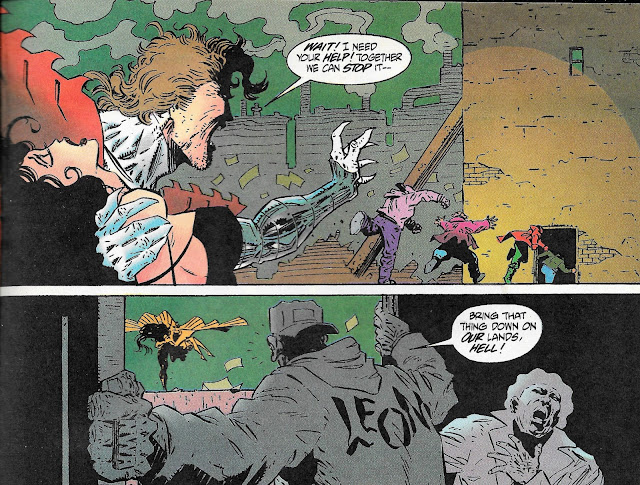 So Chase/Manhunter digs in to protect Brenna from the hellhounds and their Huntsman master.

A few things leak out of this. Like the fact that Chase knows the Wild Huntsman and what he does. Like the fact that the Huntsman lets it drop that something called him here to collect a lonely soul. Something that as the book goes on, it becomes more and more likely that it was Chase doing the calling. 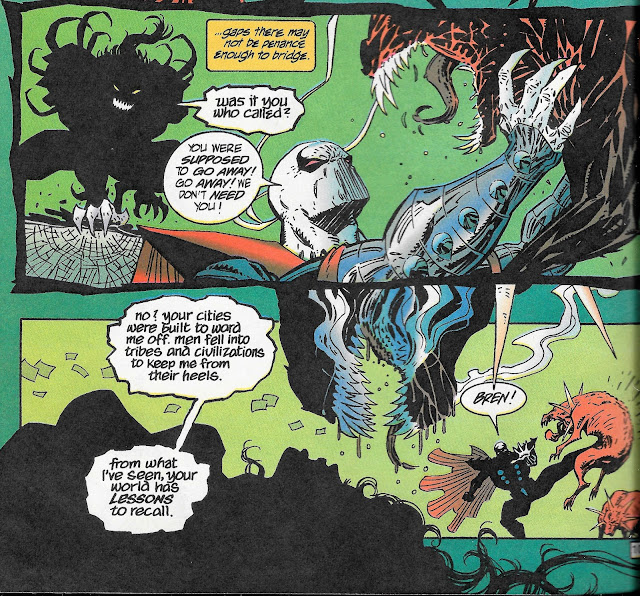 Meanwhile the conscience of the gang members gets the better of them and they rush out to defend Brenna from the dogs, one of them getting injured in the process. They succeed in dragging her to safety, however.

I kind of like that they are presented with more than a thimble-full of humanity. In lessor books this would be a pretty cut and dried storyline, yet here Grant creates some tension and draws out some character instead of leaving them as stereotypes. 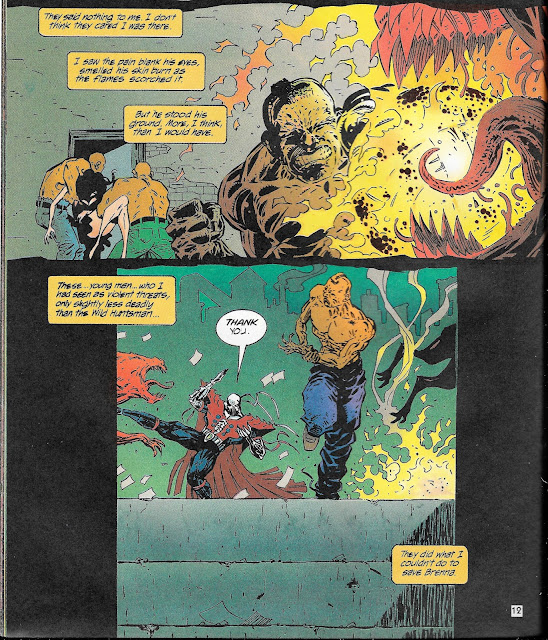 Chase has a scene with the Huntsman where he gives him his name, stating that he is his little Manhunter. The longer the story goes the more beats this has in common with McFarland's creation over at Image. 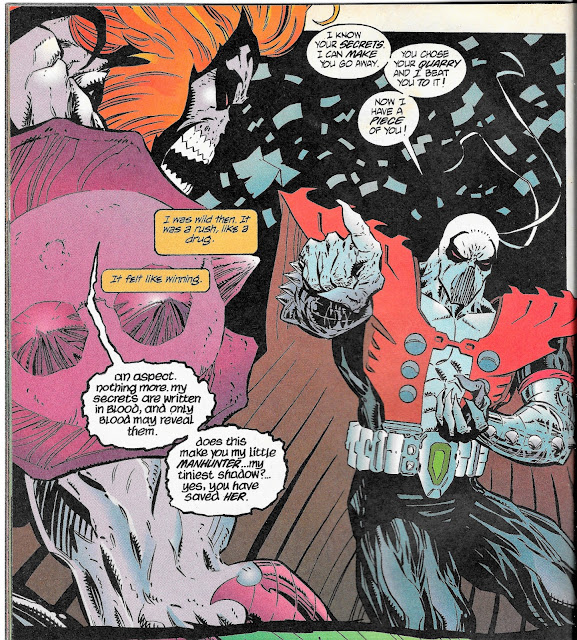 Manhunter uses his knowledge that the Huntsman has no power over groups of individuals and rushes over to the gang for protection. The Huntsman glowers at the entrance, feeding off the gangmembers fear until they begin to bicker over letting Manhunter stay inside. The Huntsman says he will let everyone go if they give up Manhunter. Manhunter explains it is a bluff and that the Huntsman can't attack them even if he wanted to. A brief argument occurs followed by a very unfortunate accident. 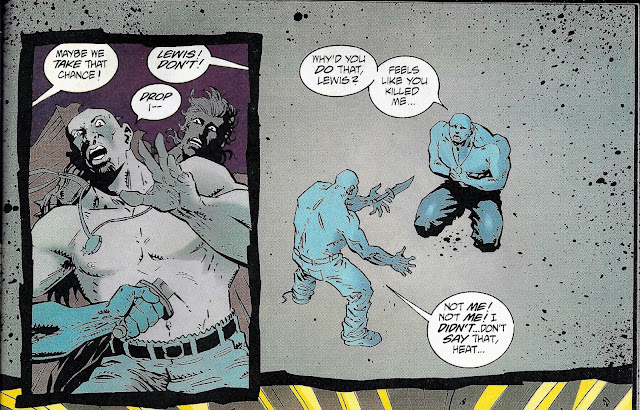 Which the Huntsman can use to his advantage. 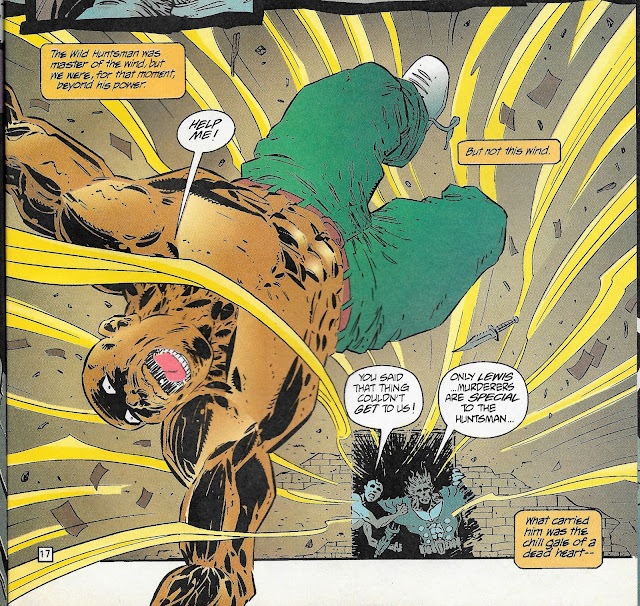 Without warning, Lewis is swept from the building by a mystical wind, sucked right out. It appears that being a murderer singles you out for special attention by the Huntsman and new rules apply to how he can treat you. 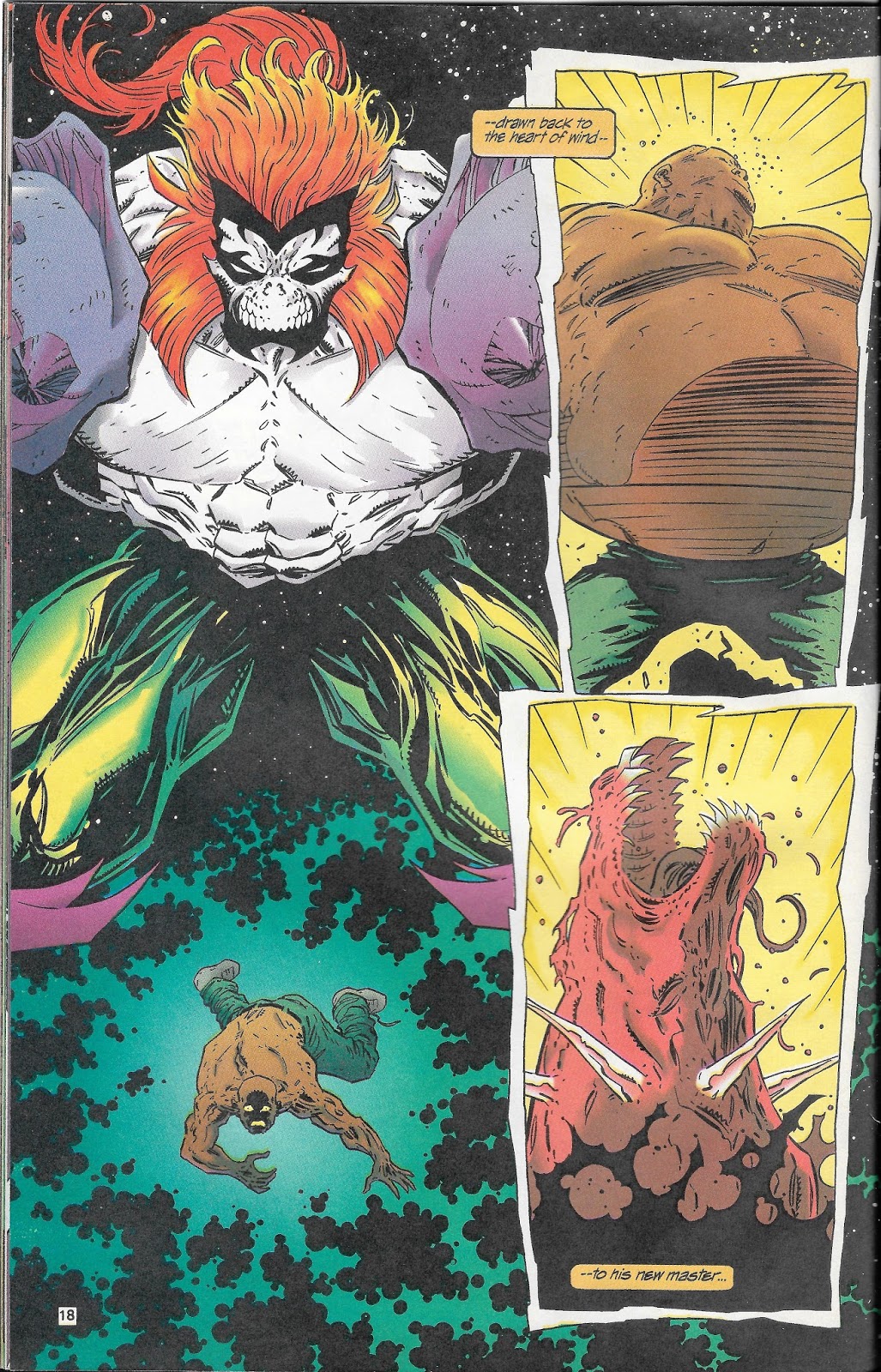 Well, this book is going to the dogs quickly.

Lewis is turned into a hellhound, part of the Wild Hunt. Surely there were some dogs at the pound the Huntsman could have adopted instead? I guess it is more menacing than say a twelve year old lab or a heard of dachshunds. Still, seems a bit harsh.

In a bit of altruism, Manhunter decides to take on the Wild Huntsman and the guy that is dying of stab wounds takes off to lead the pack away. This ends with the poor guy calling all his neighbors to take to the streets and chase the Huntsman away. After which he is forced to eat a bullet when they don't show up in time. Manhunter tries his best to contain the Huntsman, but it is too little to stop him. 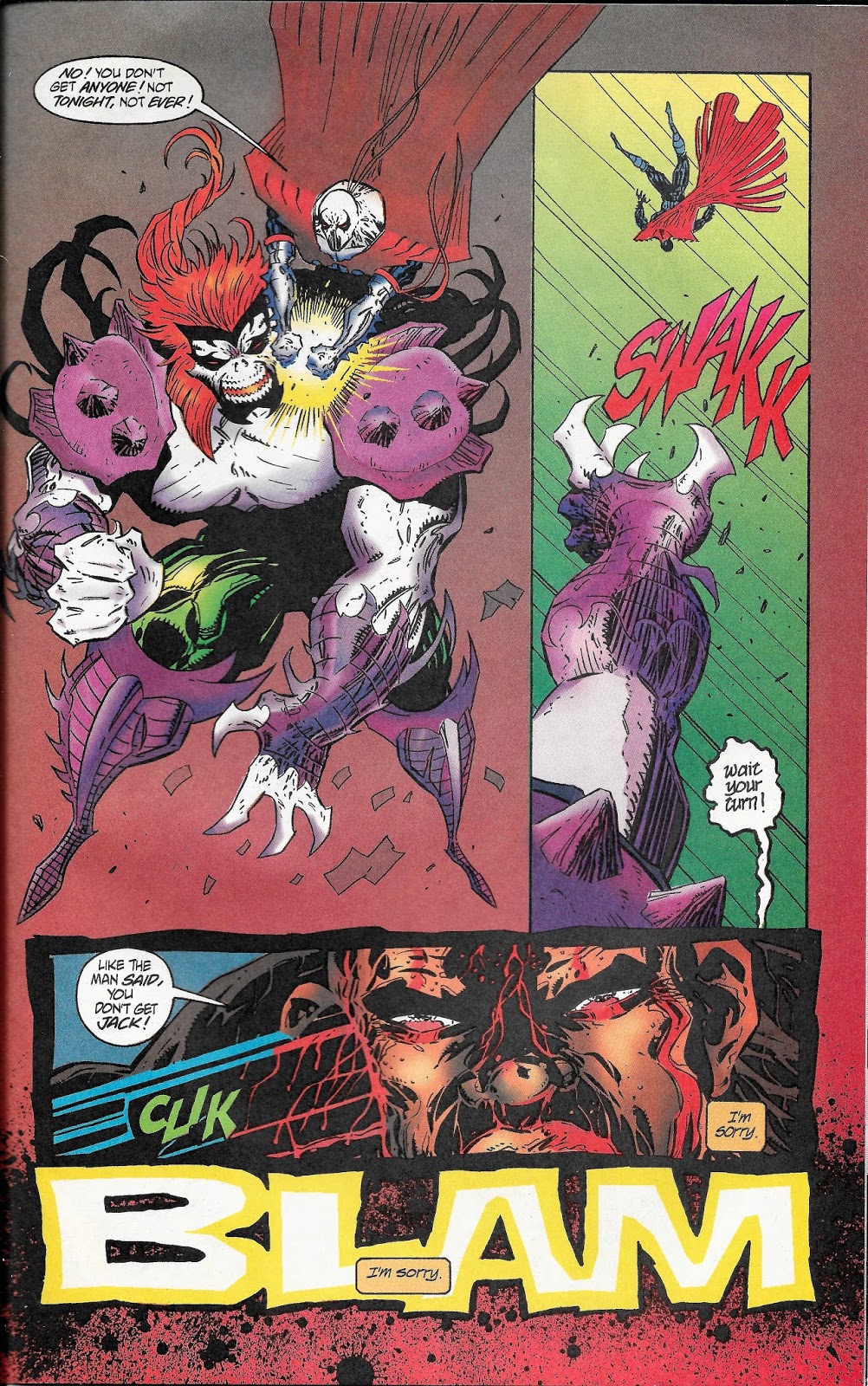 It's neat that a side character gets to carry so much of the story. It is unexpected and a good twist on the heroic tale. There is menace added to the Huntsman as well as a feeling that his power is that of a natural force. Manhunter is still shown as courageous, but unable to completely defend against the Huntsman's onslaught. I love where this story is going. Pity the run will end very quickly.

So the neighbors do show up, many toting weapons and the Huntsman is forced to retreat. We leave the issue with a bunch of unresolved questions and a slight hankering to see where this goes. If you did want to find out, you'd have to make it quick, as Manhunter's run in this incarnation lasted a year. Most of it was explained away as delusion by the time the series ended at issue 12.


Which is kind of sad. Yes, they are riffing off Spawn. However Grant has the chops to make a good story and Giarrano knows how to make a fun ride in this genre of superheroing. Obviously the experiment failed to make sales targets though.

Which is kind of sad, if you ask me.

Posted by SonOfCthulhu at 4:35 PM

Email ThisBlogThis!Share to TwitterShare to FacebookShare to Pinterest
Labels: Ch-ch-ch-changes