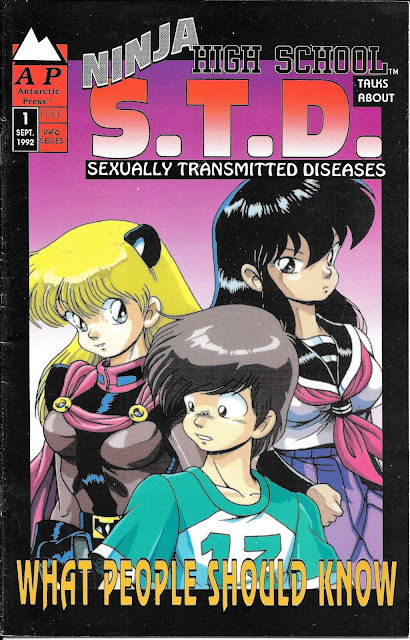 Guess which character on this cover has just been told they have an STD?

Before the giddiness and irresponsibility of Spring takes over, suddenly you realize that April is National Sexual Transmitted Disease (STD) Awareness Month.

Yup. Put that pecker back in your pants, we have to talk about all of the horrible things that you can contract from your sex partner. Chris over at Chris is on Infinite Earths is up for this throw down too. Check out his piece on the New Guardians fighting that AIDS master, Hemo-Goblin.

The Crapbox has spat out this offering from Antarctic Press featuring Ninja High School characters contracting sexually transmitted diseases. Or something.

Now I've maligned Antarctic in the past because most of their content doesn't suit my anti-cute-manga sensibilities, but I'm going to have to eat crow on this one. While this is definitely not an issue anyone outside of a Ninja High School fan would love, it does an admirable job of presenting the information about symptoms and risks of sexually transmitted diseases.

Much of that credit goes to the brother of Ninja High School's Ben Dunn. Ben Dunn was much of the creative force behind Antarctic Press. As legend has it, Antarctic was founded by Dunn when he convinced the owner of a failing HVAC company into converting his business into a publishing house for American Manga-style comic books. Dunn took over as owner/operator for several decades, putting out popular titles such as Gold Digger, Ninja High School, and Warrior Nun. He recently sold the company to start his own development company, Sentai Studios, and moved himself somewhere in the Dallas/Fort Worth neighborhood.

Welcome to my neck of the woods, Ben.

The book we have here is written by Ben's brother, however. Dr. Joeming Dunn provides all the technical details while Ben slips a wrapper around the medical information provided with an opening and brief ending sequence featuring his Ninja High School characters. I am doing my best to not turn that into some kind of condom joke…bear with me a moment.

And speaking of bearing with me, let me pause here and point out some other good sources of information on Sexually Transmitted Diseases, The Centers for Disease Control and Prevention and Human Rights Campaign.

Stay safe out there, Crapbox readers. Remember what Smokey the Bear says: "Only YOU can prevent sexually transmitted diseases!"

But back to the issue at hand, or in this case the issue IN my hand. What is a comic book about sexually transmitted diseases like? Well, it's much like an uncomfortable pamphlet you might get handed back in high school health class. Mr. Dunn doesn't provide much story to distract from the deadly serious nature of the medical information provided and Dr. Dunn provides the symptoms, treatments, and outcomes with clinical accuracy.

What I'm mainly saying is that the book ISN'T a casual reading experience. If you are like me, you will cringe at the thought of the ramifications of promiscuous unprotected sex by the end of it (assuming you make it through) and that is precisely the needed emotional context if you are going to change your behavior to help prevent the spread of STDs.

It is effective, but only to those who brave reading the entire thing and that takes an effort that non-fans might not put out.

Let's kick this thing off with a boy, a girl and a girl-shaped cat alien discussing female menstrual cycles. 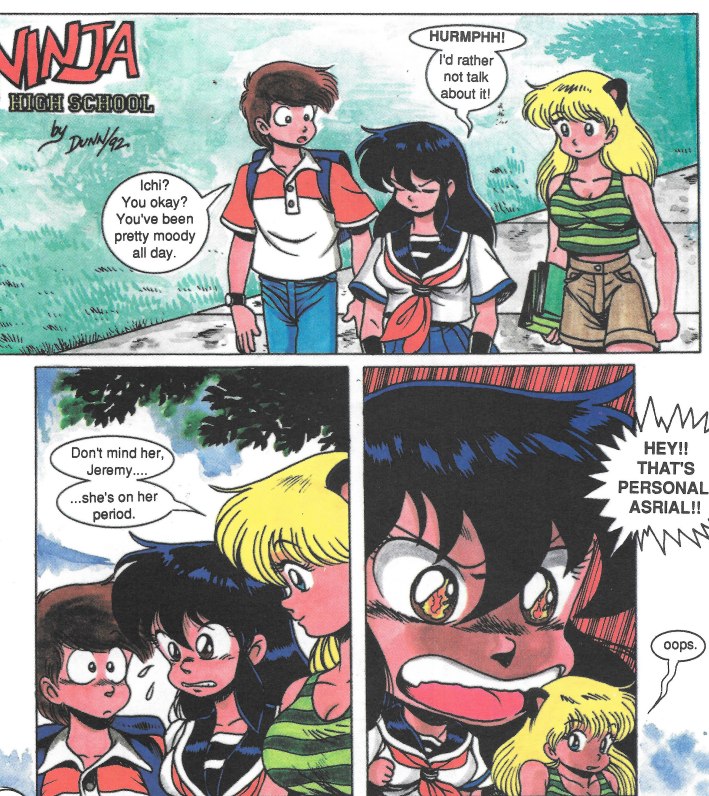 Jumping right into uncomfortable territory here, and the giant manga head in panel 3 is supposed to break the ice with some humor. Also should I giggle that a character in a book about STDs is named "Ichi"? Because I'm totally doing that.

Jeremy states that thing that all men think at one point or another in our lives, but never say. After watching painful menstrual cramps in more than one friend/partner, I can honestly state I'm glad I have the parts I've got. Even at the trade-off of never creating, housing and birthing a new living organism from my body. 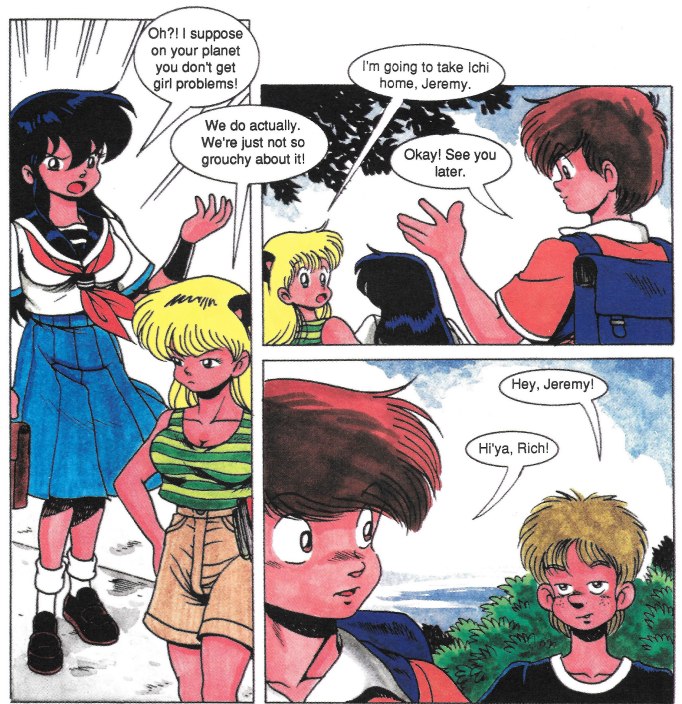 And as the alien-cat person Asrial takes Ichi home for Midol and any of these "tasty" cramp-fighting foods (while also causally telling Ichi backhandedly she's being a little bitch), we get introduced to Rich. I'm not certain Rich is a character in NHS or if he was introduced solely to have an STD. Imagine being Rich, if that last part is the case. Poor, poor Rich.

You can stop feeling sorry for him now, as Rich is the guy who has to brag up his sexual conquests, which we see him start to do here with Jeremy.

But then his STD kicks in and he doubles over in agony. 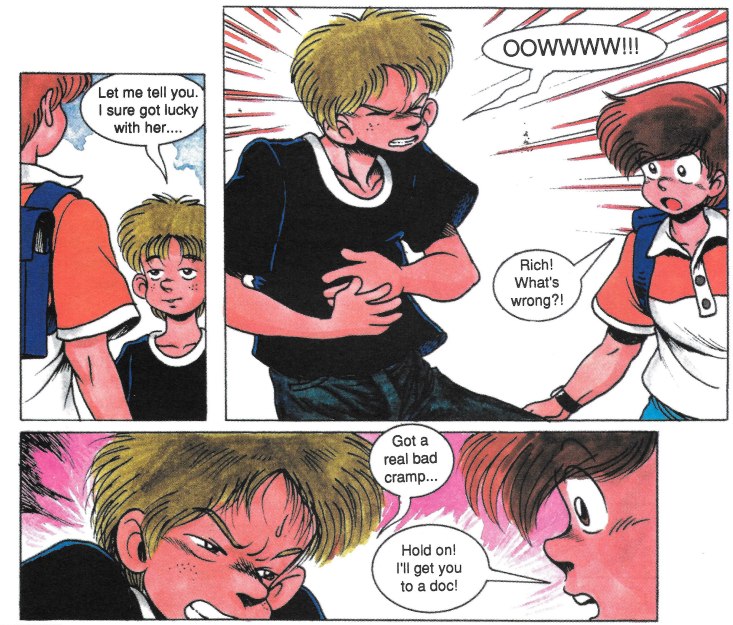 Woah, if that’s what having an STD looks like…(puts on a condom). I'll admit to wanting Jeremy to be an idiot character who would then ask Rick if he was on HIS period, just like Jeremy's friend Ichi. I mean, cheap laugh, but still a laugh, right?
That's not to be the case though. Jeremy is presented as a smart kid who knows when your friend doubles over in pain, you rush him to the nearest ER, which is where the book veers off the comic book rack and into the hospital pamphlet zone. 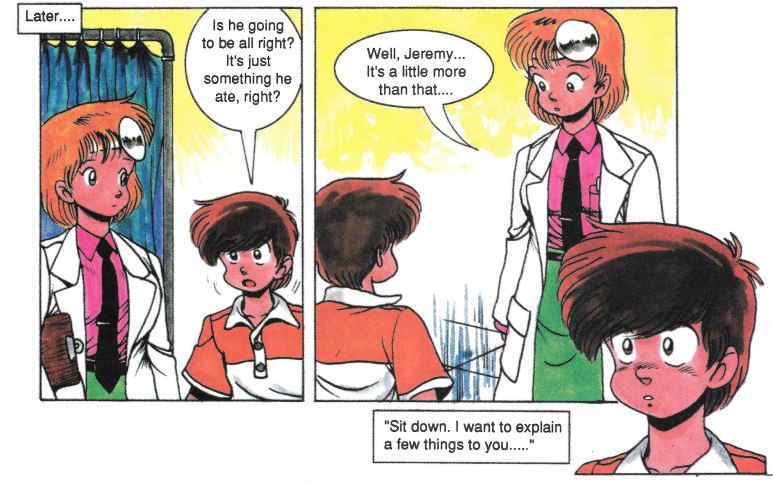 Two things: 1st this doctor is totally violating every rule of HIPPA that I've heard of in disclosing medical information about Rich's condition to his friend Jeremy. 2nd ….unless, she has assumed the boy is Rich's sexual partner and may be carrying the same disease or exposed to it. Which is kind of funny when you think about it.

We begin with a page long exposition by the doctor that feels very much like Dr. Dunn writing a class room essay on warning signs of STDs. And while she states that her purpose isn't to give Jeremy a lecture, the next twelve pages clearly are nothing more than one long extended lecture. 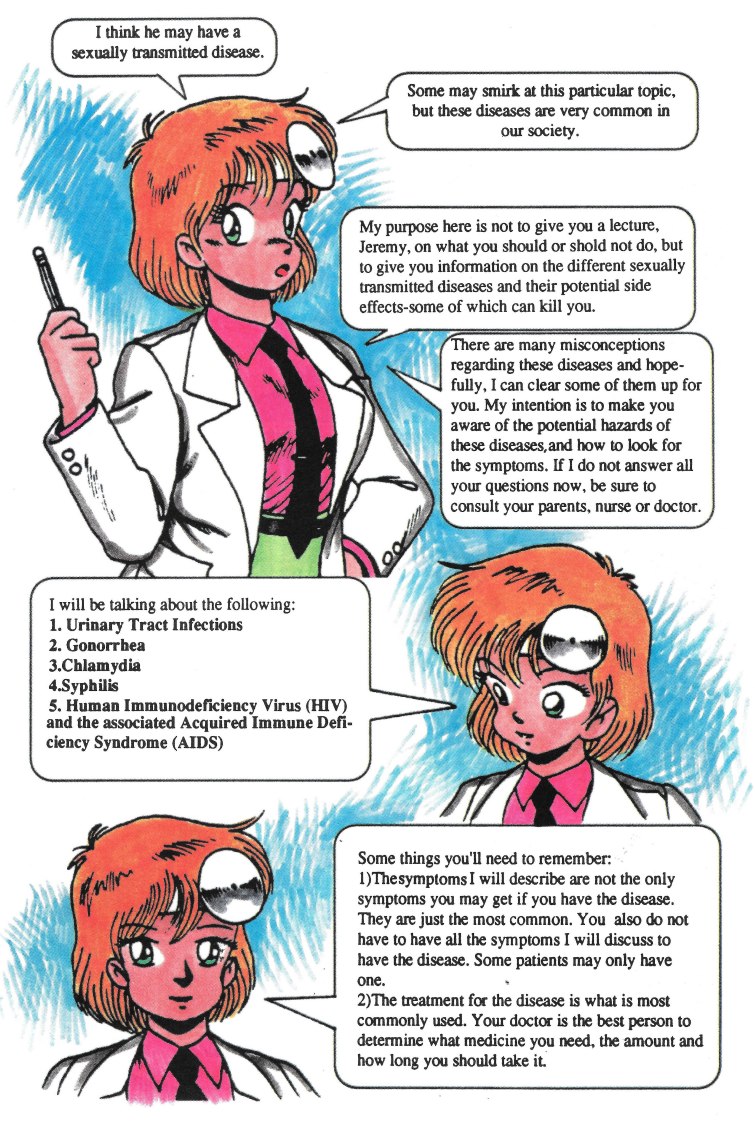 WAKE UP! Yes, that was nearly enough to put anyone to sleep, but you should read this like your life depended on it. We start down the STD path by talking about Urinary Tract Infections… 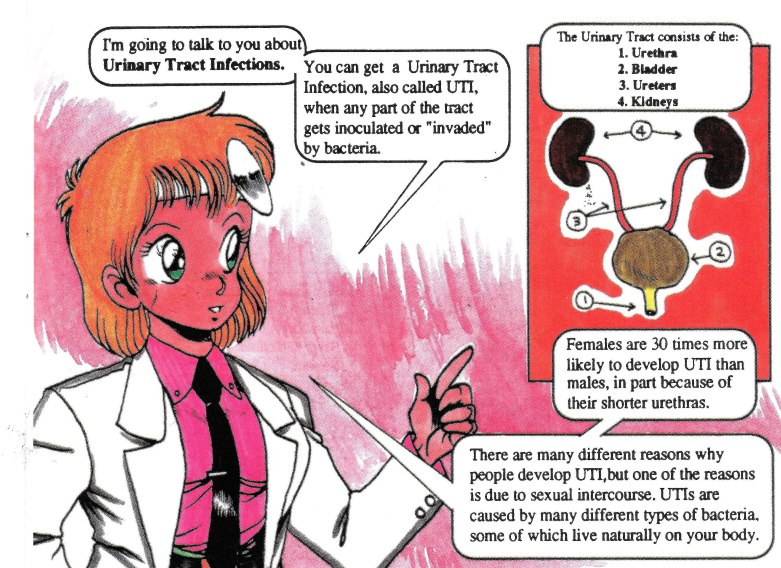 …and that part of me that was awake in high school Anatomy & Physiology jumps up and says "Because there's a Vas Deferens between boys and girls!" and then giggles like an nerdy idiot. 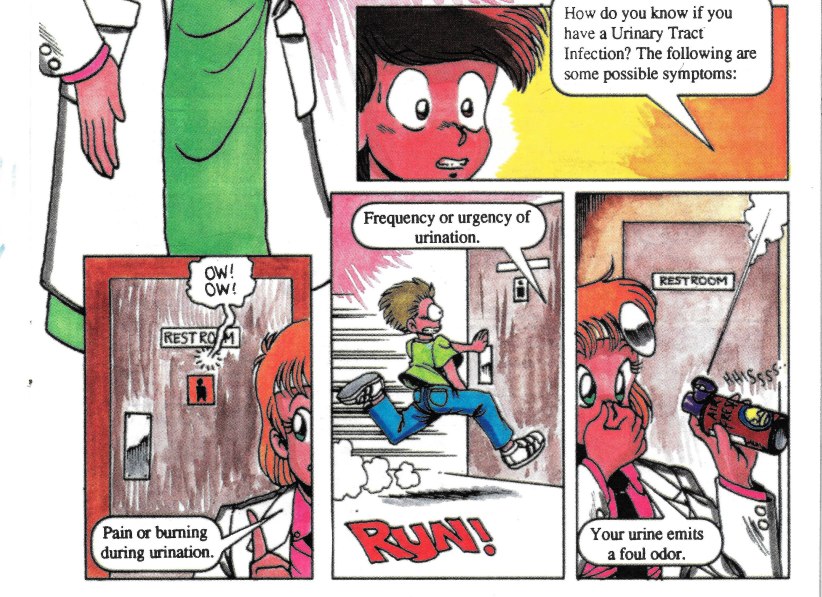 From this point forward, the book is basically the doctor verbally torturing Jeremy with various health hazard information that boil down to either "your dick will fall off" or "you will die." Note that if Jeremy's eyes open any larger, it is likely they will roll out of his skull. Let's listen in, shall we. 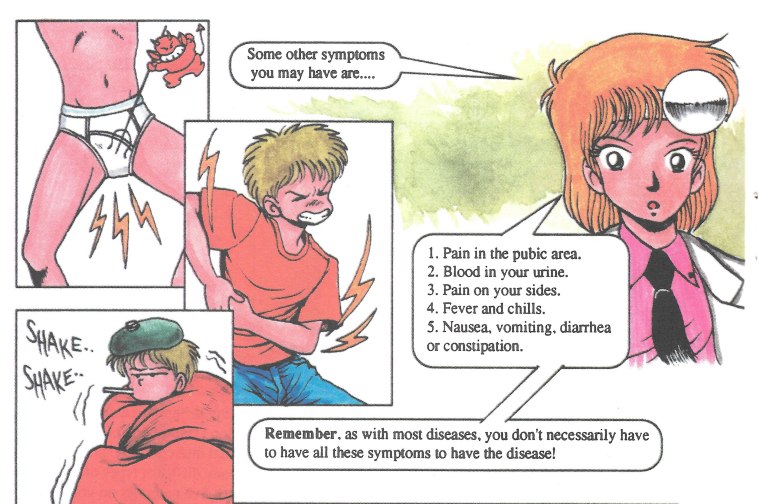 Where do the symptoms mention "stabbed in the penis by mini-devils". 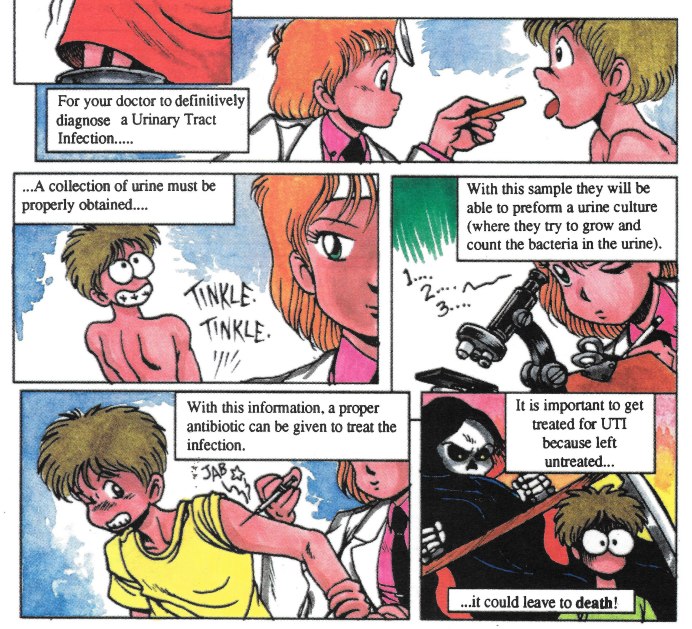 Urinary Tract Infections are probably the mildest thing talked about here and note how they can lead to death. Possibly death by obtaining a sample of urine, cause that dude looks like he's about to keel over.

But Urinary Tract Infections aren't really sexy. On to something that is sexy: Gonorrhea! 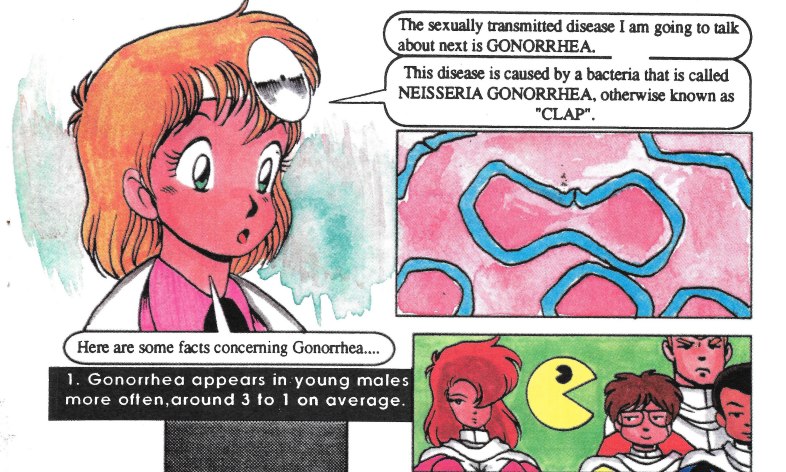 …and Gonorrhea appears in young Pac Men even less frequently, around 4 to 1 on average. 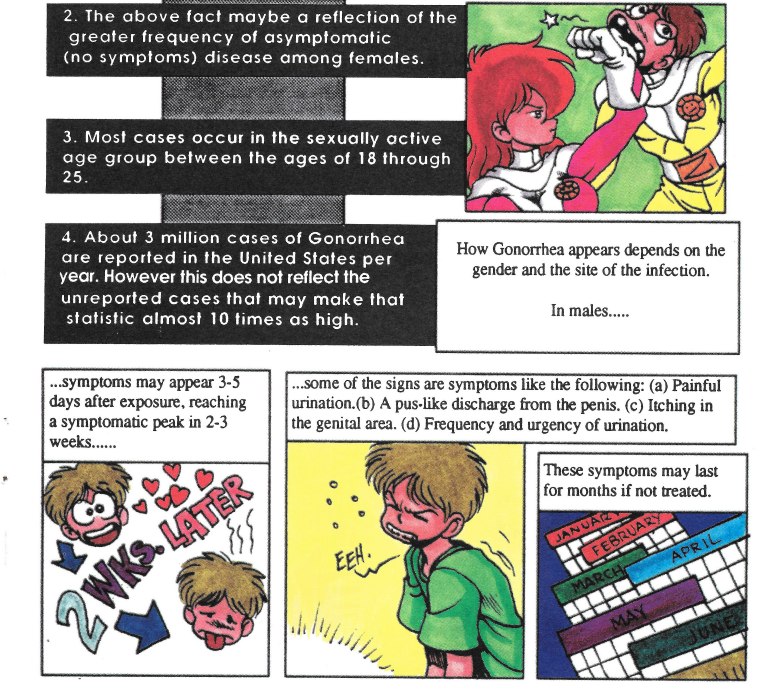 Pay attention, ladies: Apparently punching a guy's teeth out is an effective method of preventing the spread of this STD. Possibly because guys are less likely to sleep with you if you appear overly aggressive.

And for the guys, anytime you pee and it hurts, just go to the ER immediately. 'nuff said. 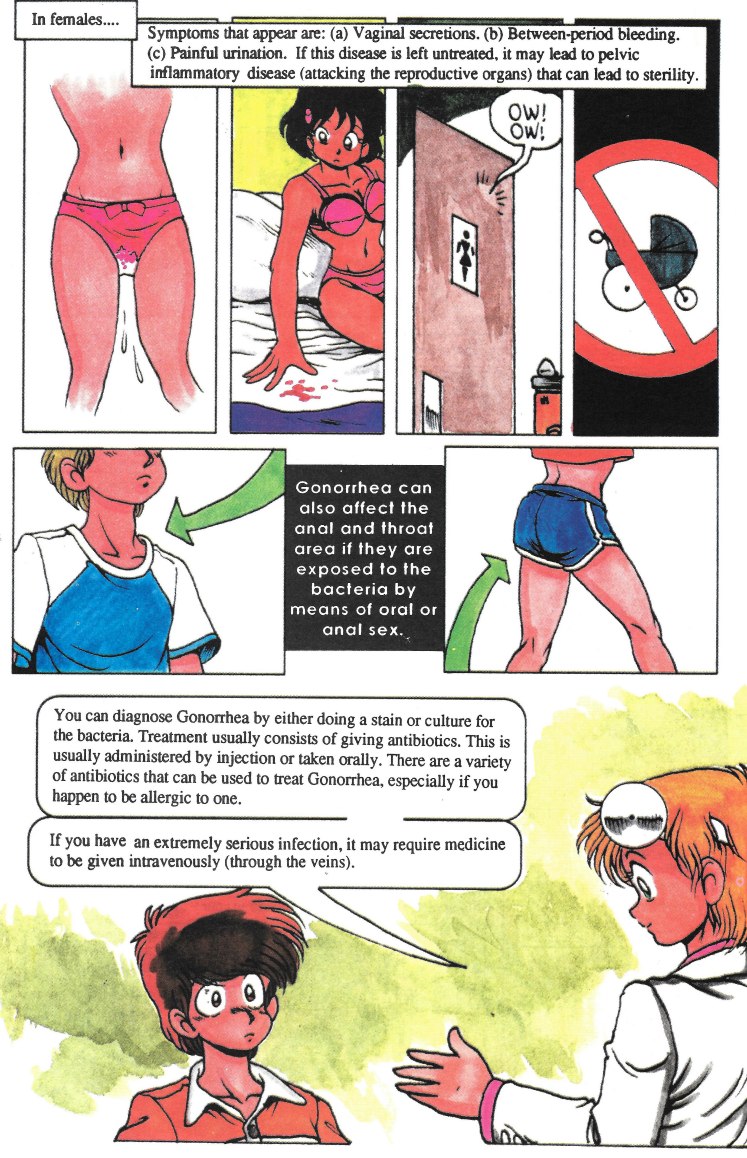 *raises hand* "Can Gonorrhea affect the hands, feet or breasts? I mean, you can have sex there too. Asking for a friend."

Look at Jeremy. You can tell he's all like "I just bumped into Rich in the park. Honestly. I haven't even HAD SEX YET EVER! Why are you hassling me?"

Let's be honest, he's probably going to have sex with the alien cat girl and there's really no telling what versions of STD that kind of sex will get you. "Sorry Rich, but you have hairballs that shoot out of your penis. Never seen anything like it. Looks very painful, however. No clue how to treat it. Hope the sex was worth it."

Speaking of things totally not worth it, Chlamydia looks to be a horrible illness.

Looks like how I feel after eating nachos that I load down with jalapenos. That boy's asshole is LITERALLY on fire. Not a disease I'd be comfortable with. And think of all the furniture you'd go through.

And the doc in this knows how to make Chlamydia sound soooo much less appealing. 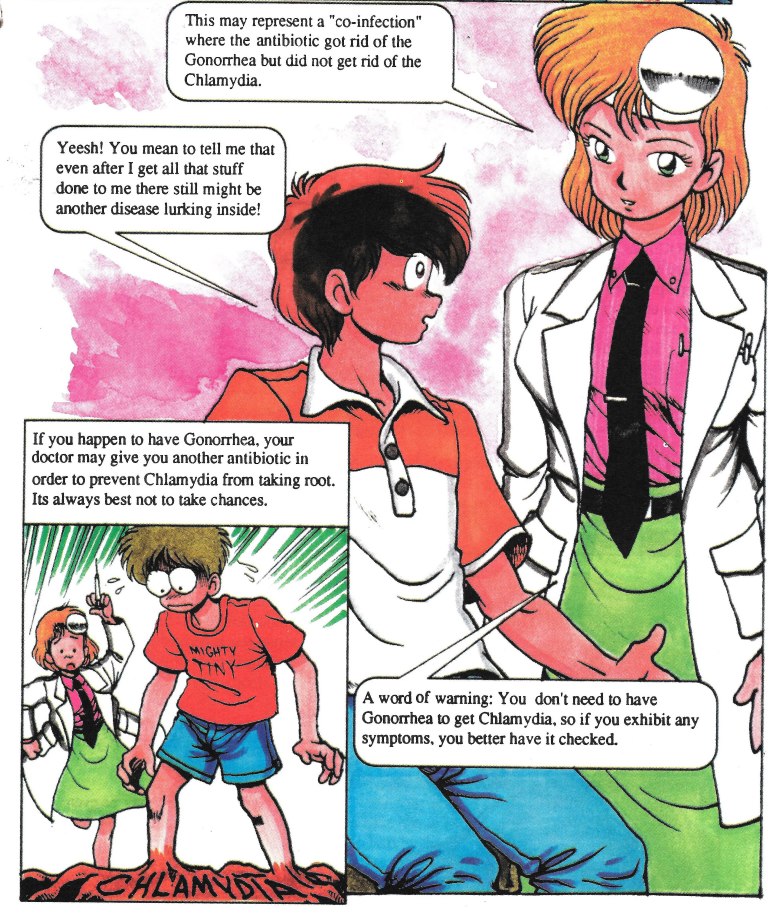 Now we are up in the big leagues: Syphilis 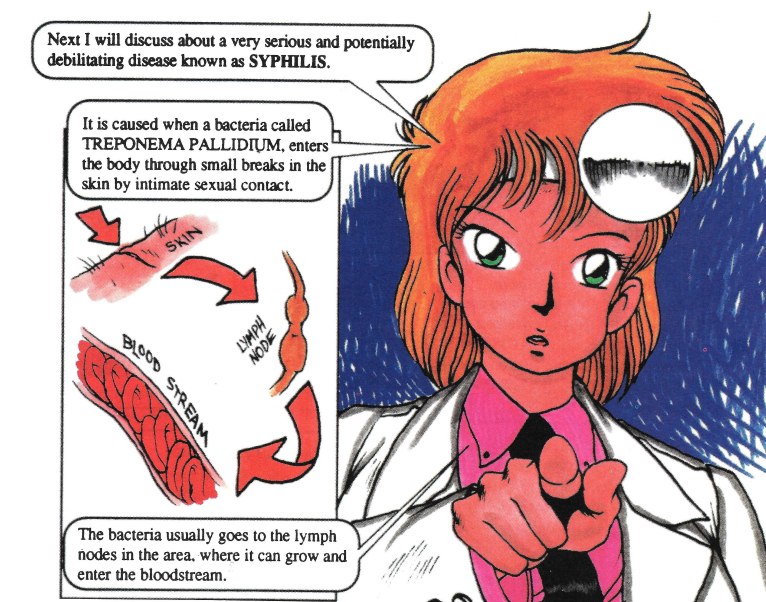 Syphilis is nothing to play around with. It killed people in droves in the middle ages. And even if it doesn’t kill you, look at all the fun stuff it causes: 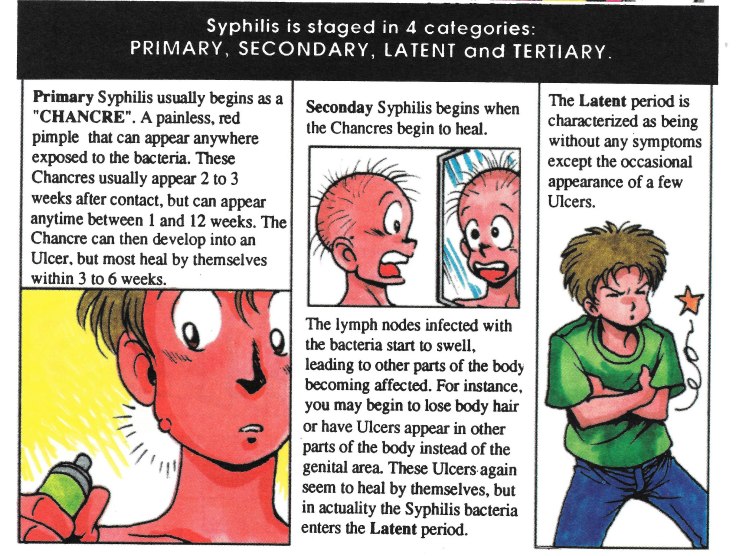 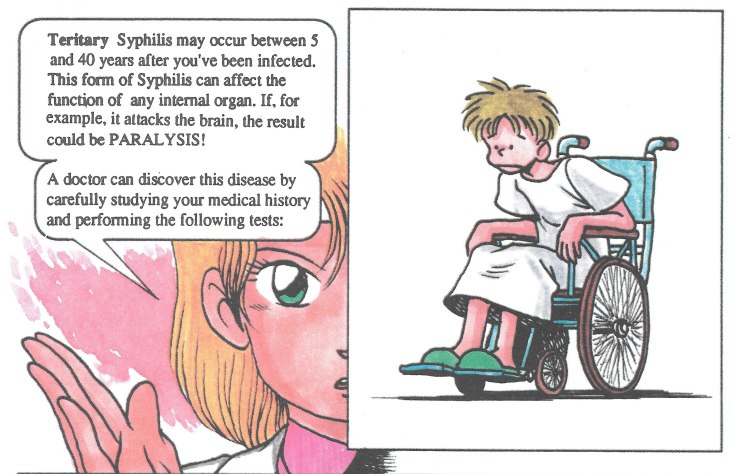 …oh! And we weren't done yet. Syphilis in the extreme can cause paralysis. *wraps dick in five ziplock freezer bags* Go on. Tell me more doc. This is fun! 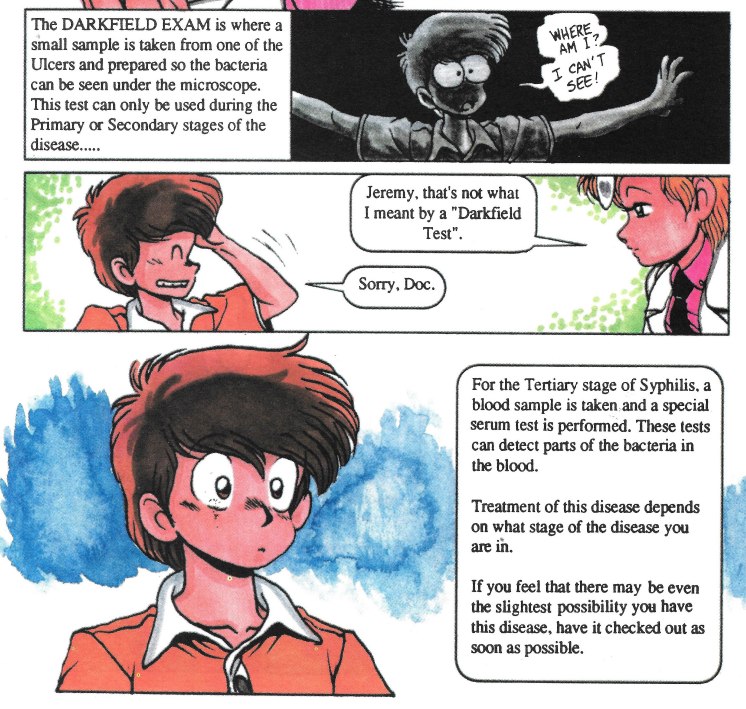 Jeremy makes a joke and the doctor rebukes him in such a tone that he's back to "scared shitless" face.

While he's doing that, I'm going to point out the one glaring fault here: the book skips one of my (least) favorite STD's: Herpes.

Yes, Herpes! Or as I like to call it "the gift that never goes away." Like the Everlasting Gobstopper of venereal diseases, Herpes is the thing you can't get rid of after contracting, the disease housing itself in the body of your neurons for all eternity.

Maybe it isn't as "sexy" a disease since it isn't likely to kill you, it does cause many uncomfortable and painful side effects.

For that reason alone, I've included a helpful video on the 'ole Herp to make sure everyone is up to speed.

So maybe not as bad as I've been lead to believe, but still not my cup of STD.

Which leaves us with the biggest, baddest STD of them all. 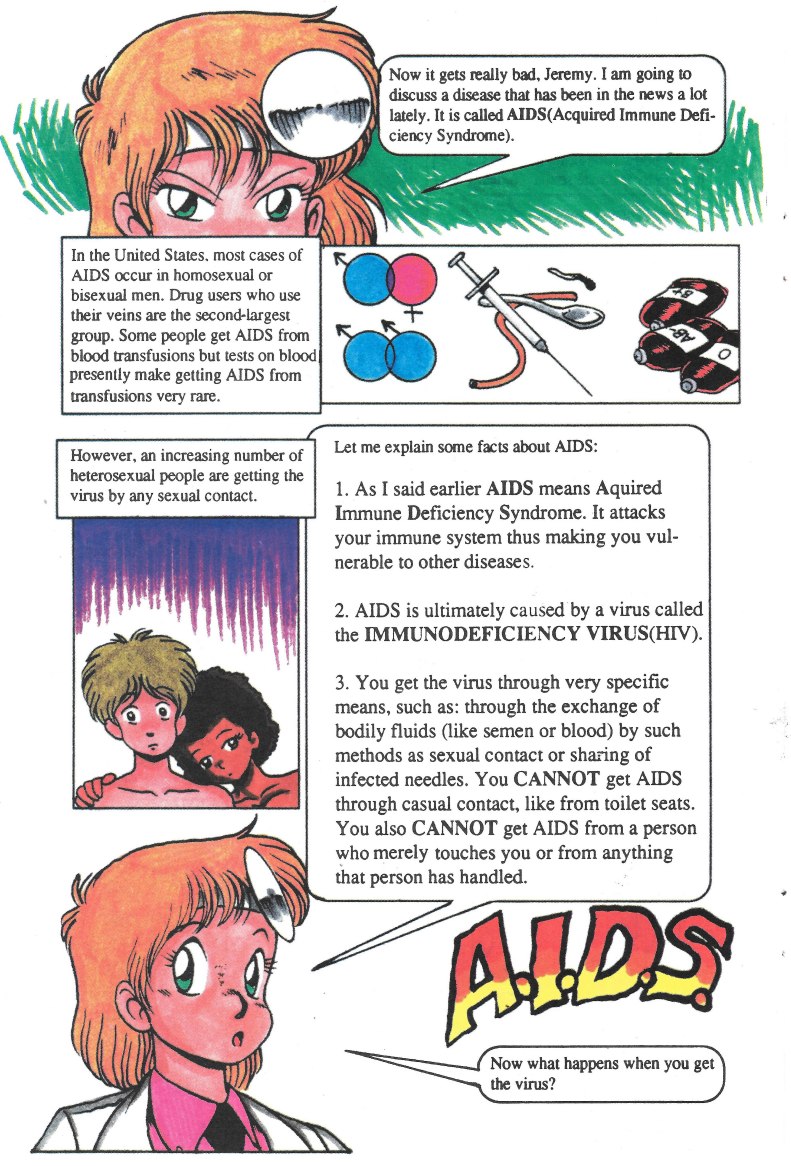 Yup, AIDs caused by HIV infection. And HIV even leaves SoC without any jokes. It's a killer and all of this info is really important stuff.

Yeah, that's not even a comic anymore, it is a pamphlet, but I URGE YOU TO READ IT. The more you know about HIV and AIDs, the better informed your decisions around protected sex will be. Stay safe out there, readers. I only have so many of you and each of you are important to me. 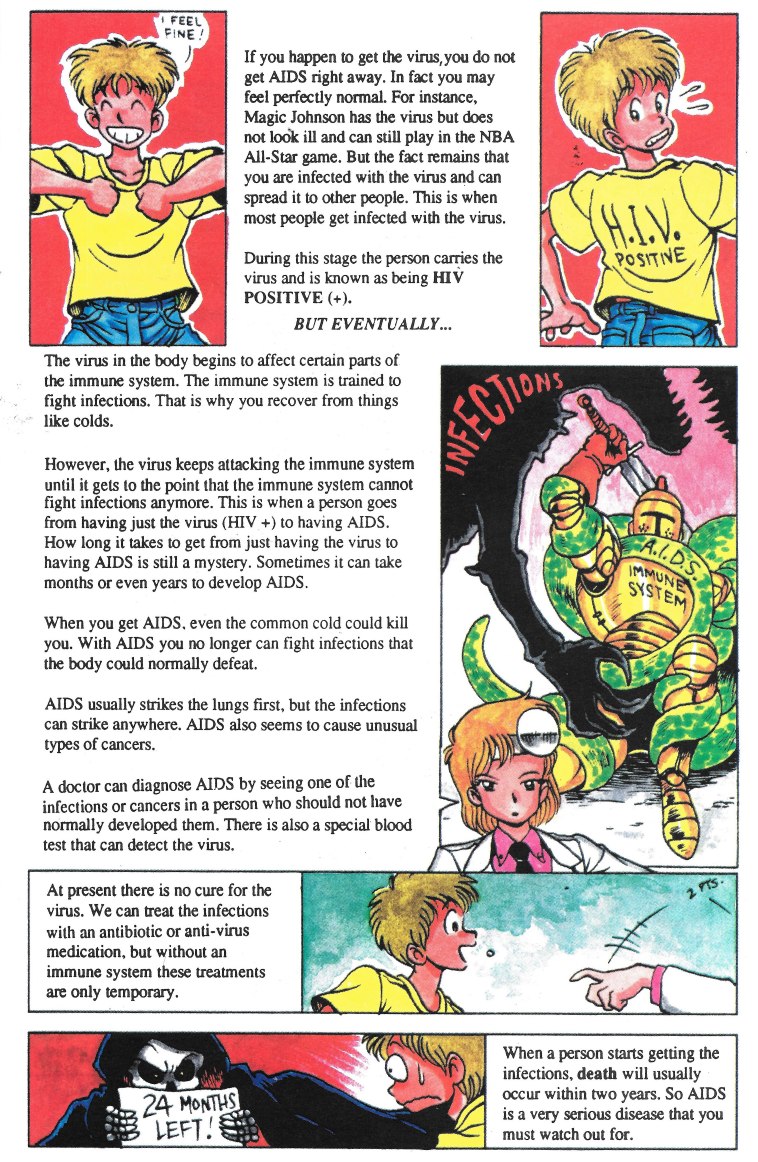 Back to Jeremy though. Who is now completely frightened out of his wits. 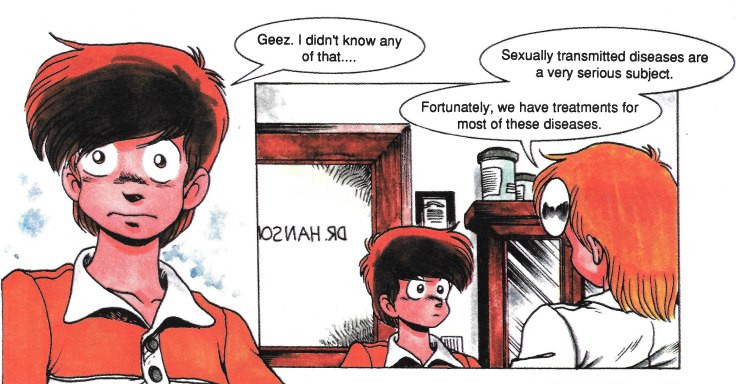 As he should be. He next asks "How about Rich?" to which I thought the proper response would have been "Oh, sorry. He died while I was rattling on about all the STD types. Guess I should have been working on him instead of talking to you." 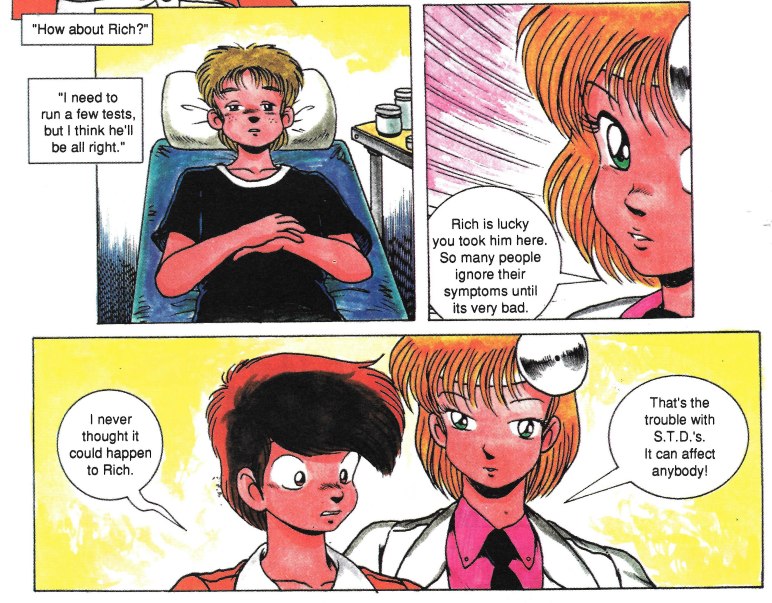 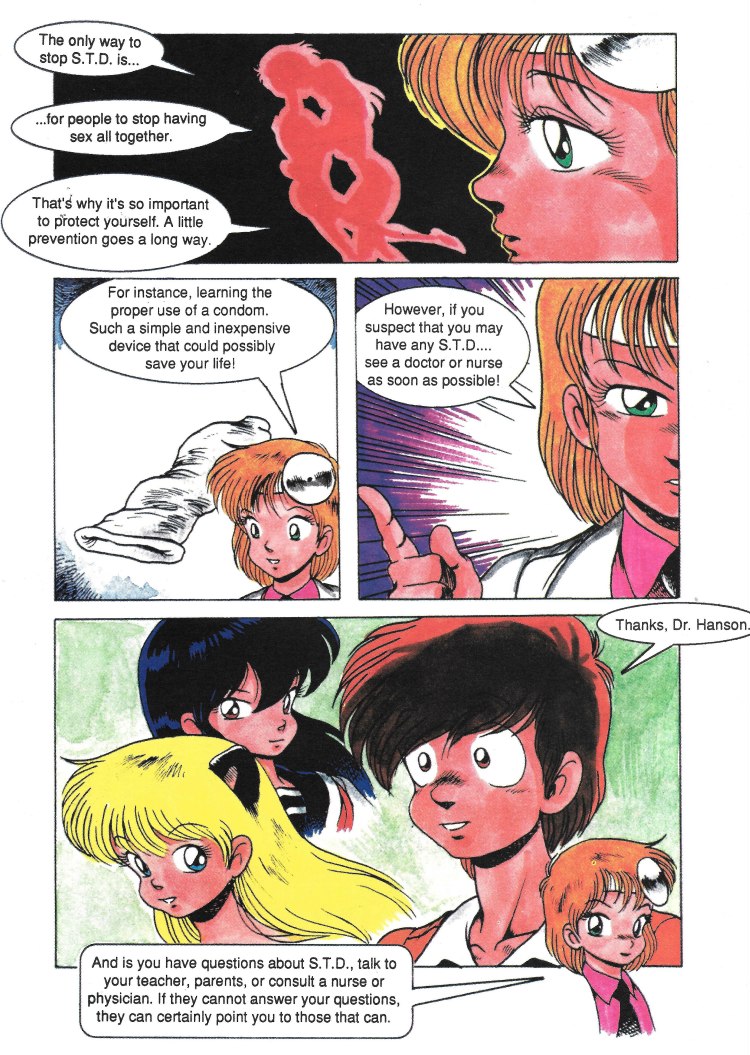 If I have to fault the book anywhere it is that it spends loads of time going into the types and symptoms of the various diseases and we get only one panel advocating condoms and knowing their proper use. The book could use some balance in prevention as well as identification.

So that's it for me this week. Hats off to Dunn, Dunn and all the folks at Antarctic Press for putting this book out there. Hope everyone has a safe and STD-free weekend.
Posted by SonOfCthulhu at 2:34 AM