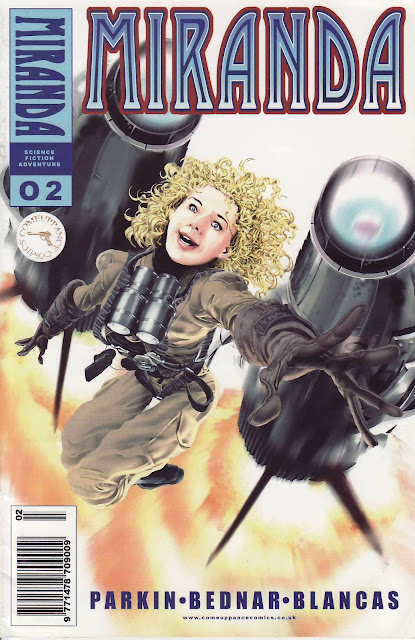 You have the right to two pages of colored art, anything you read can be used against you…

What is canonical? How far out from the source material can something go and still be considered part of the mythos. As a Cthulhu fan, I often pose that question about works I read. Take for example Stephen King. Somewhere in most of his stories he’ll drop a name from the Necronomicon. People like me who pay attention to stuff like that, appreciate the nod to HPL’s work. However we also know that mere inclusion doesn’t make it part of that shared universe of stories. It's not mythos, unless it is Mythos. A story has to have the same tone or work with the same elements to merit inclusion.

How does all this relate to Miranda? Miranda is the brainchild of Lance Parker. Parker was a fan fiction writer who made good, advancing to being a published author of his most beloved character.

That character just happened to be the BBC Time Lord called The Doctor or as we know him Doctor Who. In one of Parker’s novels he introduces the character of Miranda, an orphan living in our time who has escaped from a violent future where her Father, the Galactic Emperor, has messed up the timelines. It’s alluded to that her father is a Time Lord (Miranda has two hearts) and he may even be a future incarnation of The Doctor himself. That books is called Father Time and a synopsis of it can be foundHERE.

The series Miranda takes place after she’s left the company of the Doctor and is convinced by other time travelers to return with them to the future. Once there she is to take her place as the Galactic Empress. I’m going to be honest and say that all this came as a shock to me because I read the book before doing any of my homework. The links are so tenuous between the comic character and the origin material that it can be enjoyed without having any knowledge of the good Doctor. It has a very slight bit of the quirky humor found in the Doctor Who books/series, but nothing very overt. Miranda lasted a scant three issues, which was far too short to complete the six issue story arc setup in issue #1.

Allan Bednar handles the art and does an outstanding job. Sadly, the book is rendered in black and white with the exception of a two page color spread in the middle of the book. I say sadly not because I see black and white art as somehow inferior, but due to the fact that Bednar’s panels on those two color pages look gorgeous. That brief taste leaves you salivating for more. I’m sure all of you are salivating for me to get on with it and so I shall.

The issue begins with a full page of horrible art. Stuff so bad that you think you’ve found an awesomely bad book. A page of nine panels that look like these three.

I’m not sure what we are suppose to be looking at, all I know is that white on black background is hard to read when run through the art like that. I’m sure you agree. So page one crushes any expectation that this book will be good. Which we soon find is not the case.

Very next page we are introduced to Miranda who is getting ready for her big debut as Empress of the entire galaxy…excuse me, of 12 entire galaxies. With her is a guy named Ferran, he seems like an alright bloke here and it turns out he’s the one that plucked Miranda from the past and brought her back to the future. He’s got plans for her, it seems and those plans may not be exactly in Miranda’s best interest. For now he’s her support system. 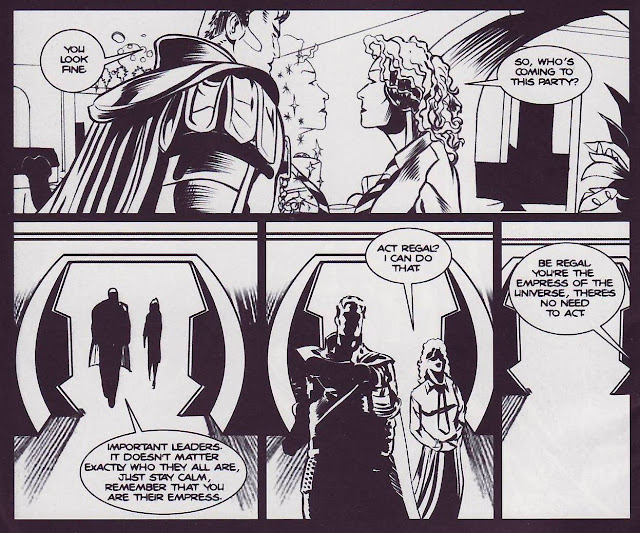 Her introduction to the dignitaries goes well considering that Miranda is a real fish out of water. Note the art here is really only minimally better than on the first page, but we are digging our way out of the hole. By page four, however the book appears to have hit its stride. 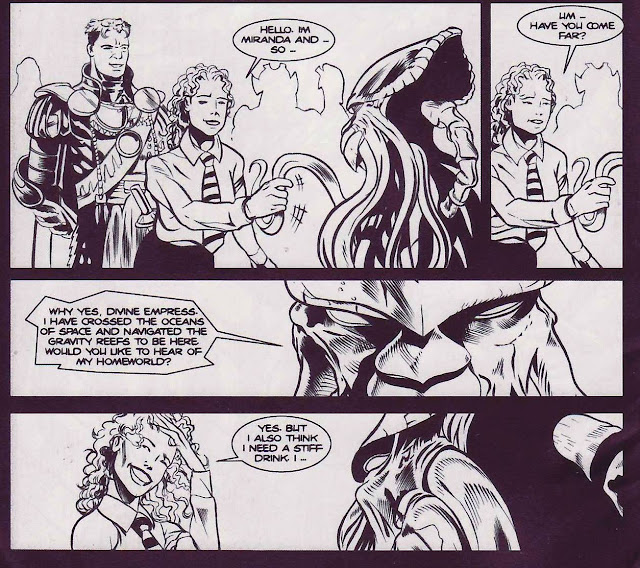 And we see the first inkling of real character from anyone in the book. The author does everything in his power to play up this “fish out of water” aspect of our heroine and in the end that makes up for the book’s main problem. A problem that amounts to a fairly decompressed storyline where very little happens. Miranda comes off as plucky, charming and thoroughly British and I find myself wishing that more was done with her character.

As the party slides along at a snail’s pace, Miranda bumps into a waitress who passed her a note as soon as she got out of the TARDIS or whatever time travel device was used last issue. The chick disappears into the crowd and Miranda loses track of her before she can riddle her with questions. Next she’s accosted by this monocle gentleman who she puts on the spot. 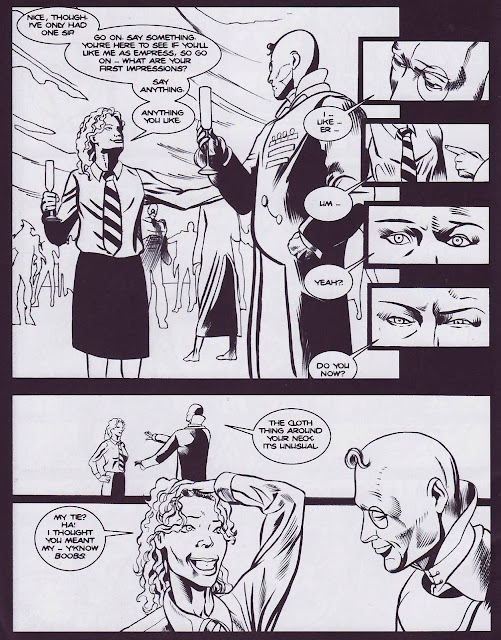 In that last panel he does appear to be giving them an appraisal. All these great comedic moments can’t last however because we are due for a confrontation of some type before book’s end. We get it in the form of a giant robot that snatches Miranda up. 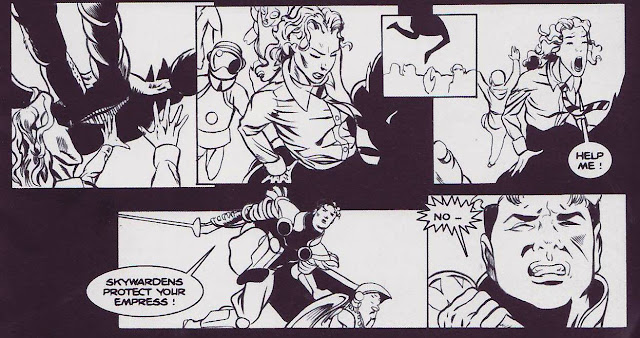 Ferran calls out the skywardens, who appear to be the future version of traffic cops. Or, given their effectiveness, the future version of meter maids. These brave gentlemen with jet packs slapped on their backs fly off to certain doom against the huge robo menace. By the way, you can definitely tell the book was a product of English sensibilities because these gentleman do not try use a gun to shoot the thing out of the sky. What they do attempt, in glorious full color, is to use harsh language against the techno-terror, the result of which is very efficient. 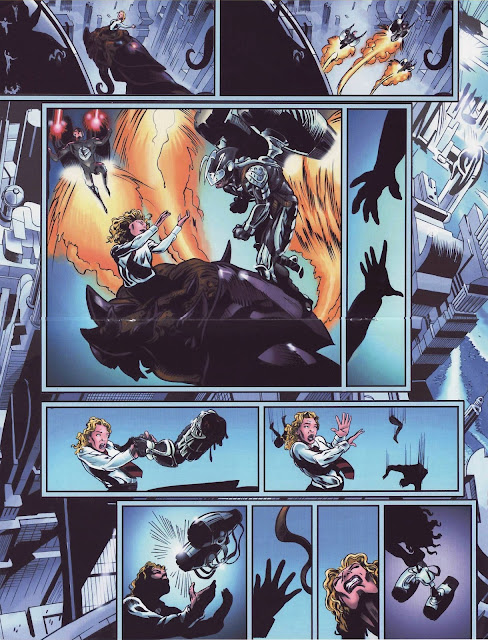 They are efficiently dismembered. The panels look really good and the overall image is almost poster quality. The next couple of pages have Miranda using the jet pack thing to get away, then this robot with religion shows up and battles the evil, Miranda-stealing robot. Evil bot gets the upper hand and is about to kill the good-guy bot, when suddenly Miranda on accident dumps herself in the sea and turns her jet pack into an unguided missile. While good-guy bot prays…well, see for yourself here. 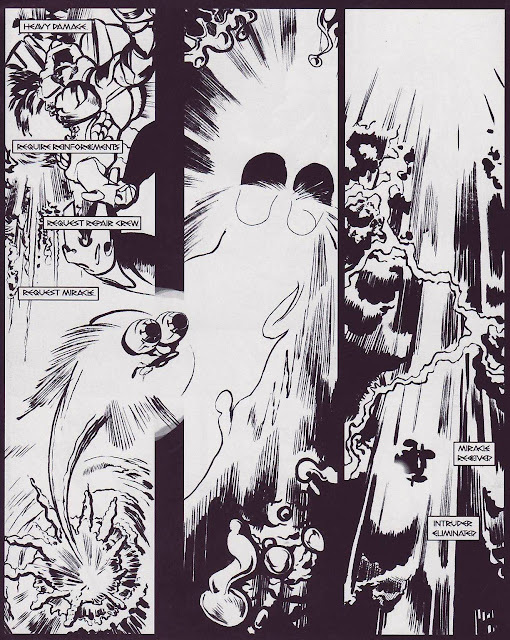 If you can’t make that out, it is the jetpack flying out of the sea and slamming into the bad robot. It goes kerboom. I guess those skywardens have balls of pure steel to be riding around with one of those “flying bombs” attached to their back. I can see the recruitment posters now: “Skywardens – If you’re lucky, you’ll be dismembered before your jetpack explodes!” Anyway, our robot feels thankful to Miranda for saving its life, the concept of which I have a problem with since it is a) not alive and b) shouldn’t be sentient enough to be thankful. After being fished from the drink, Miranda is back at the Emperor’s palace where Ferran violates her privacy. 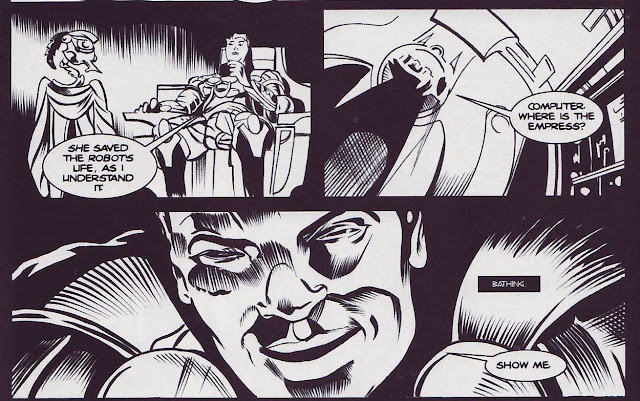 I think HR is going to need to have a talk with that young man. I’m pretty sure he needs another round of sensitivity training. You don’t watch a female bathing without their permission. Ferran’s nickname in grade school was “Tom Peepers”, by the way. And does anybody else find it odd that the Empress’s bathtub looks like something from a Walt Disney Resort?

I guess it really is a small world after all. And speaking of small worlds, that servant that tried to warn Miranda earlier about Ferran shows up. Just in time to put the skids on his peep show too. Miranda has a typical reaction to the news. 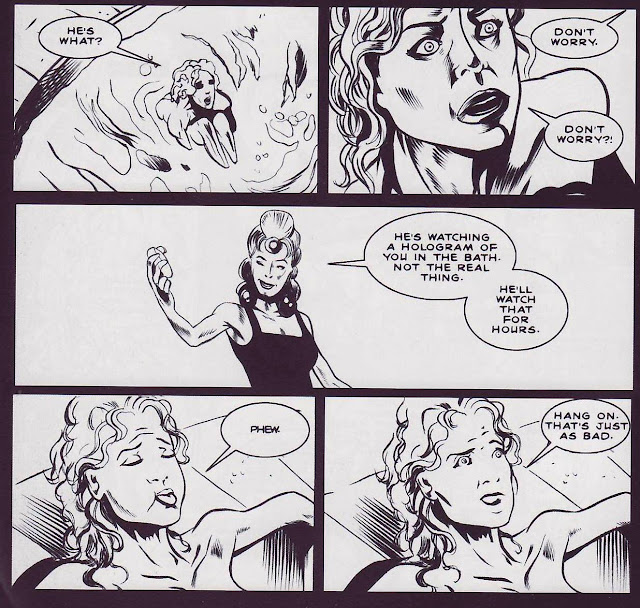 The issue sums up with Miranda getting a warning that Ferran expects them to be married and that he is not one for uniting the galaxy. He even gets a three-quarter page, sitting on his throne like Doc Doom shot to round out the last page of the issue.

It’s a shame there isn’t more here. Miranda is a likeable character. The book takes a leisurely pace getting anywhere and while the art is good, the color centerfold makes the rest of the book look bad. A shame more wasn’t invested in this because it could have turned out to be a top shelf product. Sadly after issue number 3, Miranda ceased to be.

Posted by SonOfCthulhu at 10:01 AM

Email ThisBlogThis!Share to TwitterShare to FacebookShare to Pinterest
Labels: The Fairer Sex, Tie-ins