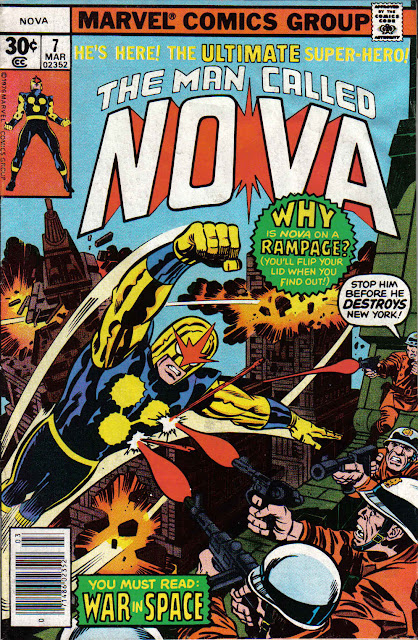 So many things wrong with this cover, just read on…

Remember back when comics had covers that had absolutely nothing to do with what was inside the book? The makers of TMCN #7 do. According to this cover, Nova is on a rampage and needs to be stopped before he destroys New York. Lid flipping may occur as you read this story.  Also the tale is called War in Space. Nova is shown destroying the tops of whole buildings. It’s enough to get one positively excited, until you realize New York is not in space. So a story called War in Space that takes place in New York is kind of misleading. For the record there is no war, but some of the issue does take place in space. Also my lid did not flip (sorry Marvel).
We find on the first page of War in Space, that Nova is under the mind control influence of a band of dastardly villains. Following the rules set up by my review of issue number 4, these guys have to be either original and crappy or stolen from another hero. Guess what? In this issue we get both. Nova is being mind controlled by these guys: 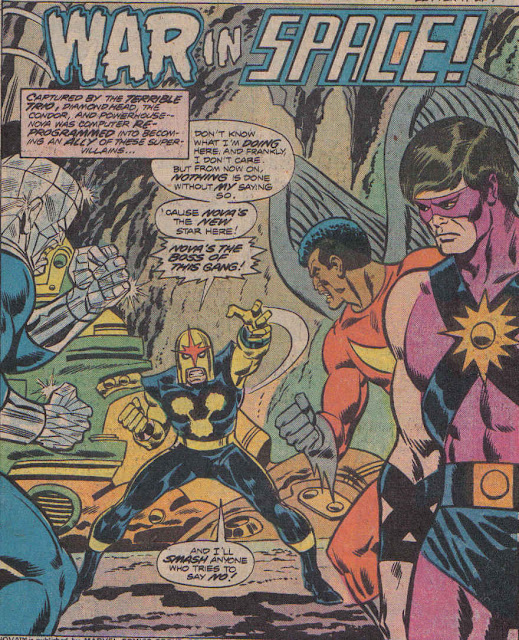 That’s Diamondhead, Powerhouse and their leader Condor. They are original and crappy villains numbers one, two and three. And while we need to take a moment to deal with each of them in turn there is one more villain in this piece: the Sphinx. The Sphinx fits into category number 2, having been lifted from the Fantastic Four. But on to the new guys. 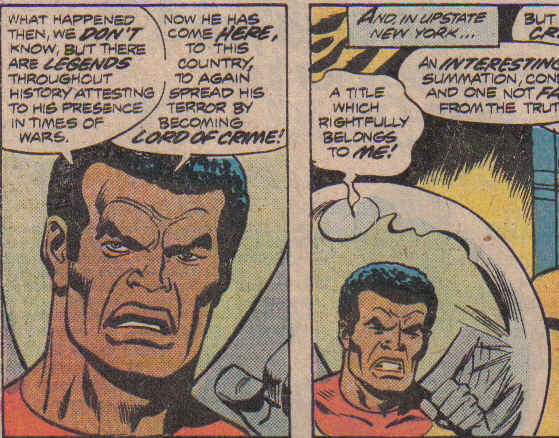 First up is Condor. Condor has the power of…Anyone? Anyone? Bueller? The power of flight. Surprising, isn’t it. That explains those enormous wing-like things on his back. He’s also super smart. So smart that he knows all about Nova, his space ship and the equipment on board it. So smart that he has built the computalyzer that turns good guys into bad guys. So smart that he can build a space ship and even a spray that lets you breath the air in space for 15 minutes. He is even smart enough to have a master plan – become the “Lord of Crime.” 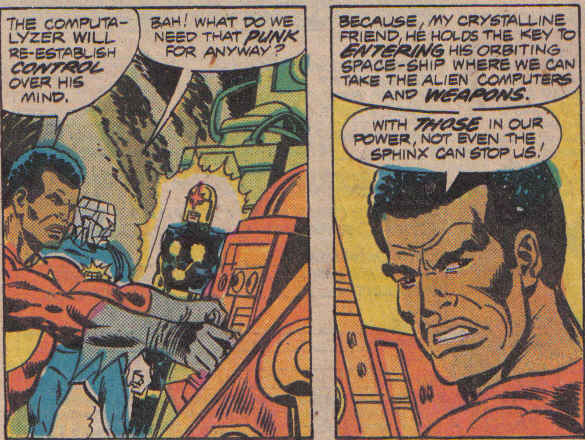 His only obstacle is the Spinx who also wants the title. The Spinx, however, is ultra-powerful. Condor, on the other hand, only has the power of flight and the ability to play a mean game of Trivial Pursuit.


I’m not putting the Condor down or anything, but why doesn’t he just patent some of these inventions and make a fortune. If that computalyzer can make Nova into a rampaging villain, think of using it to stop compulsive eaters, smokers or addicts who want to kick the habit or Donald Trump from opening his mouth. It could be a huge money-generating enterprise (I’d pay to shut Donald up.). And that’s just one of his inventions.  I guess I’m not really dissing him for that, but it does bring up the other hole in his (and the Spinx’s) plans. The Marvel universe already has a Lord of Crime. A Kingpin, if you will. No, he doesn’t show up here to smack either of these two around.

Who else is along for the ride with Condor? A guy named Powerhouse who wouldn’t be such a bad character if only he wasn’t moping around all the time. Seems like Nova isn’t the only character who’s head is getting messed with here. Powerhouse has the ability of draining a person’s natural strength. He can sap your will to live one of two ways: 1) by touching you or 2) by allowing you to read his emo-laden thought bubbles. My advice to Powerhouse is this; seek counseling 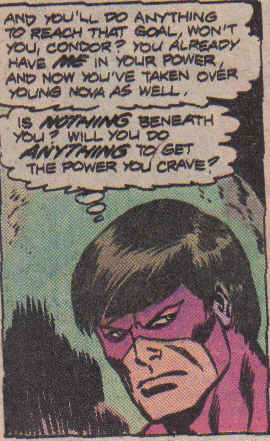 To answer Powerhouse’s final question: Yes, Condor would do anything, including enduring a sad-sack like yourself. Up last is this bright fella – Diamondhead. 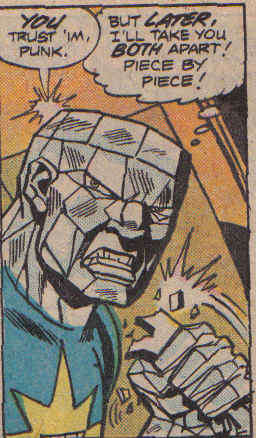 He’s like the Thing, a strong man that is almost indestructible. Yet the difference is that Diamondhead’s body is made out of diamonds instead of rocks. I am stunned at the level of creativity that went into a character like Diamondhead. The fact that he seems pretty thick and is looking to take out Condor after they succeed should come as a surprise to no one. 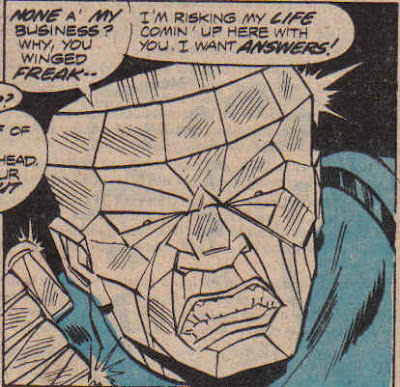 If Condor is a freak for having wings, you must be a super-freak, diamond-dude. Throughout the rest of this book, I keep wondering: “How many carats do you think Diamondhead’s cranium is?” Wouldn’t it be easy to just kill him and had a gemologist cut out those annoying ear/face features. His head is bigger than the Hope diamond. I bet he’s got a billion dollars walking around on his shoulders. I wonder if I could have it mounted in a nice four post setting. What an engagement ring that would make. Maybe it’s just me and because my wedding anniversary is coming up.

The plot of this story is convoluted. Nova’s already under the effects of Condor’s beam when we start the issue. Nova thinks he’s a bad guy and the leader of the gang. Diamondhead resents him, Powerhouse gets all depressed and introspective around him, and Condor wiles Nova into doing his bidding. Condor wants weapons on Nova’s orbiting spaceship that will allow him to conquer the Spinx. To get to Nova’s spaceship, Condor needs one of his own. So he uses Nova to break into a warehouse and steal them for him. They take out the warehouses guards and a security robot, but suddenly Nova breaks free of the mind control. Powerhouse saps his strength and Condor brainwashes him again. 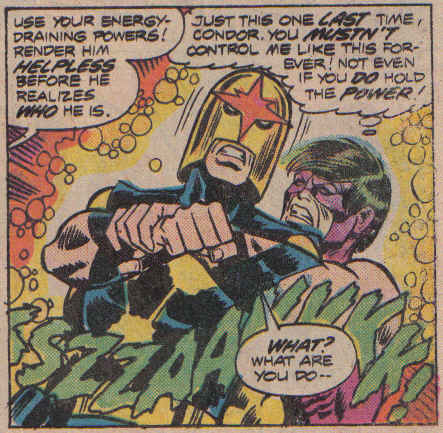 A team once more, they all hop in Condor’s ship and fly up to Nova’s.

I’m not sure about Diamondhead’s “skin-pressing” quote, but I’m fairly sure there’s only one sun in our solar system. Nova must have parked his craft in what we would call the “south-forty”. Once there they are attacked by more robots which they defeat and then by the busted up parts of the robots which they also defeat. Then Nova remembers who he is and Condor locks him into his own space ship and sends it off into the void.

That marks the end of the issue and perhaps the end of Nova. Now to take a tally on the 'ole Nova Villain Meter.

Nova Villain Meter:
The Condor – 3 out of 5 evil Nighthawks
Powerhouse – 2 out of 5 emo Bishops
Diamondhead – 1 out of 5 overpriced Things
Posted by SonOfCthulhu at 3:00 AM