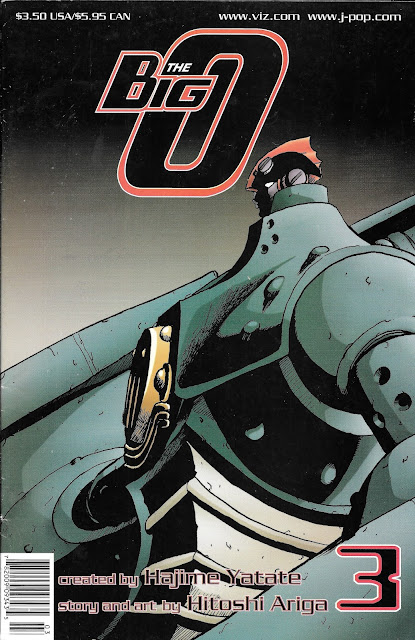 Shares one thing with the Anime: Nothing makes any sense

I rarely get into anime shows.

Like almost never. My love of the genre begins and ends with Starblazers and we all know how long ago that came out. I've sat through first episodes of Trigun, Full Metal Alchemist, Samurai Champloo (almost got me!), Robotech and so many others. None of them "caught me".

Okay, maybe I do enjoy the silliness of a Pokemon episode now and again. Also perhaps for the sake of my son, I will sit through an episode of Naruto.

But love a series? Binge watch from beginning to end? That doesn't happen.

It almost did with The Big O. I mean, I tried to like it. I was there on October 13, 1999 when it made its debut and for some reason I felt a pull to watch it. I mean it's a show about a giant mecha and we all know I have a soft spot for giant robots. The show patterned much of its look off of the Bruce Timm Batman: The Animated Series, adopting a tech-noir kind of vibe, which I found even more appealing. Best of all the lead character, Roger Smith looked and sounded ultra cool, like a James Bond-for-hire. 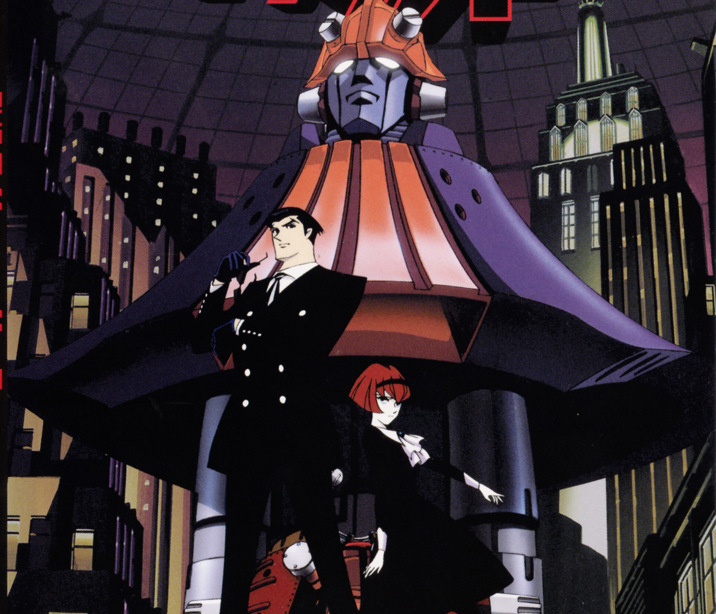 And then I sat through about three episodes and realized the world the show took place in was just bat-sh*t crazy and I gave up on it.

Big O's setting is Paradigm City, a city where everyone has amnesia. No one can remember beyond forty years ago when something destroyed the world outside the city. Most of the city is covered by a huge dome and everything is controlled by the sort-of-evil Paradigm Corporation.

I know it is asking a lot for my animes to feature both giant, building destroying robo-battles AND believable worldscapes, but what can I say? I'm picky. A boy wants what a boy wants and I need my escapism anchored in some realism.

So kudos on totally making your product sound like adult entertainment, Sunrise. You might want to work on that next time.

Even in my depression over the name and setting, there still was a giant robot to love and some clever camera work that played off B:TAS as well as a suave super-spy type and his one-eyed butler working on the a confusing mystery with bullets and rocket launchers and androids.

Oh! (Big O!), and that theme song which is almost a direct lift of Queen's "Flash" main title. I mean compare them side-by-side if you don't believe me. Same shouting the title, same musical structure, same beat with alarm sounding behind it section, same everything…

What I'm saying is that it tricked me into liking it more than just a little.

Other people too, apparently, as the series was originally only slated for 13 episodes, but Sunrise was convinced to produce an additional 13 for American audience when it didn't catch fire in Japan. However the resolution to the mystery of everyone's amnesia was so lame that even Americans abandoned it. What we were left with was lots of style, little substance and a few good giant robot battles.

The comic book fared better than the anime, although I'm not quite sure how. There were two different series, actually. The first had no subtitle and the second being called The Big O: Lost Memory. The original books had eight volumes comprising of three to four issues each. It tapped out after 21 issues. The second series had two volumes and lasted for 8 issues.

The book in my clutches is issue three of the first series and it is a might slow for my tastes. We begin with Roger performing his task as a negotiator, working to get funds for a school that has been subject to Paradigm City's version of eminent domain. This gives some background into the cruel setting the people outside of Paradigm City have to deal with, a harsh world where the sun doesn't shine anymore. Inside the dome is a kind of industrial paradise. Roger is shown to be a caring young upstart who fights for the good of all people. This was pretty much the tone of the series as well. Even if the details of what Roger is fighting against were rather vague, you always felt he was in the right. 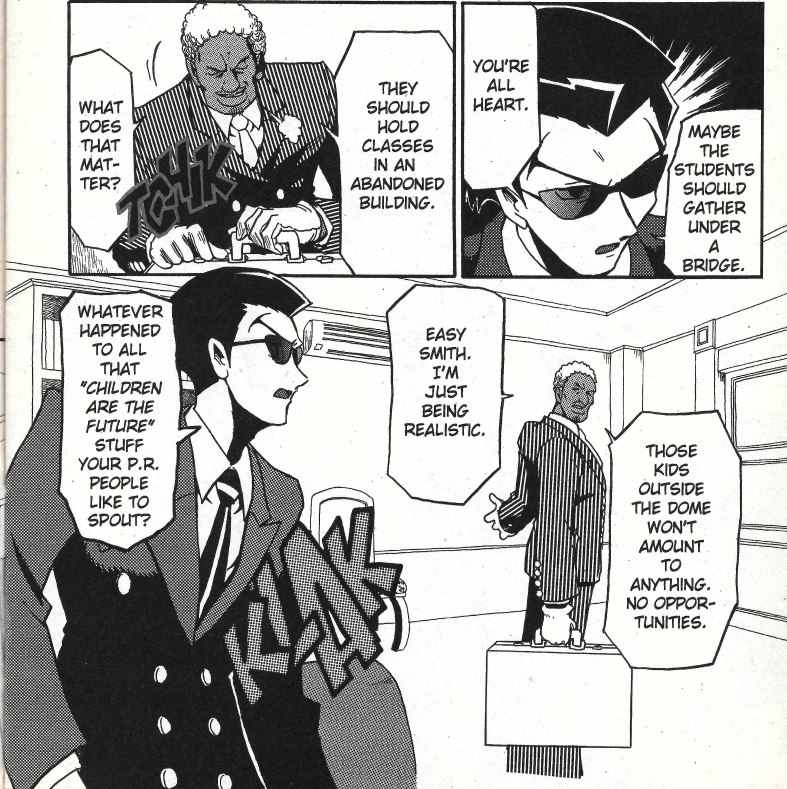 The problem was the "everyone has amnesia" plotline they had going. Prolonging that mystery was an incredibly difficult thing for the writers and I don't feel that did so successfully. Take for instance this part about Sheila and her "memory." The young student begins by saying a picture of butterflies is full of "lies." 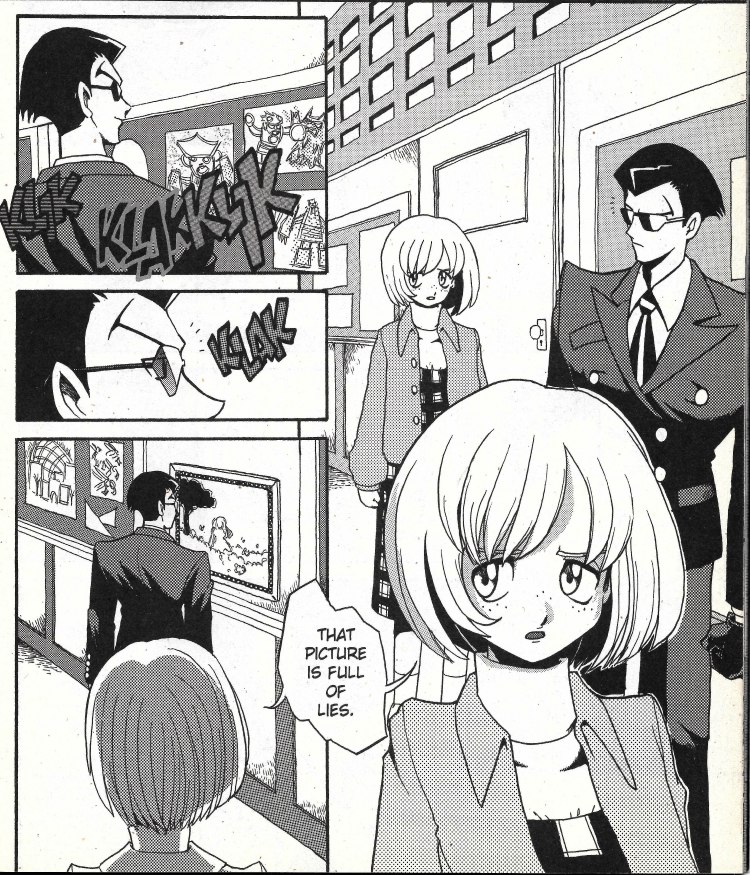 Sheila's being all superior, saying the sky wasn't ever that blue and that the girl got it all wrong, basically being a real dickish children's art critic. She points out the butterflies specifically, which will have bearing on things later claiming they don't look like this… 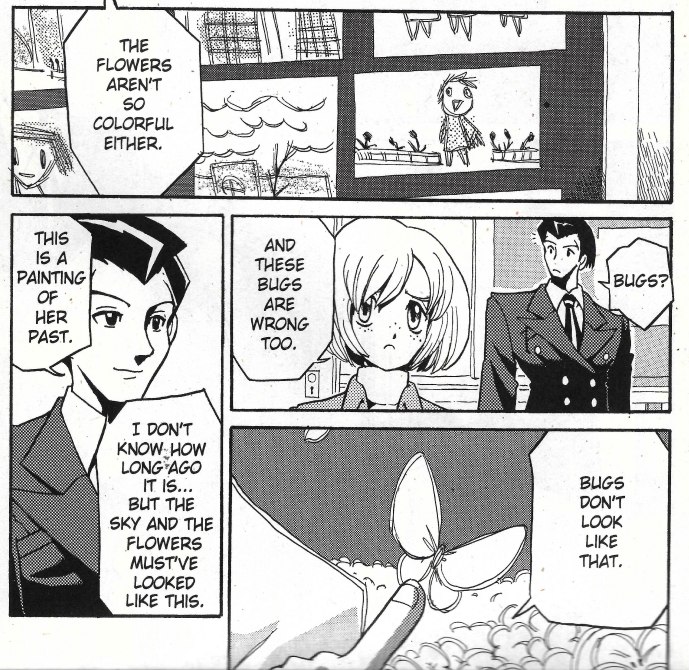 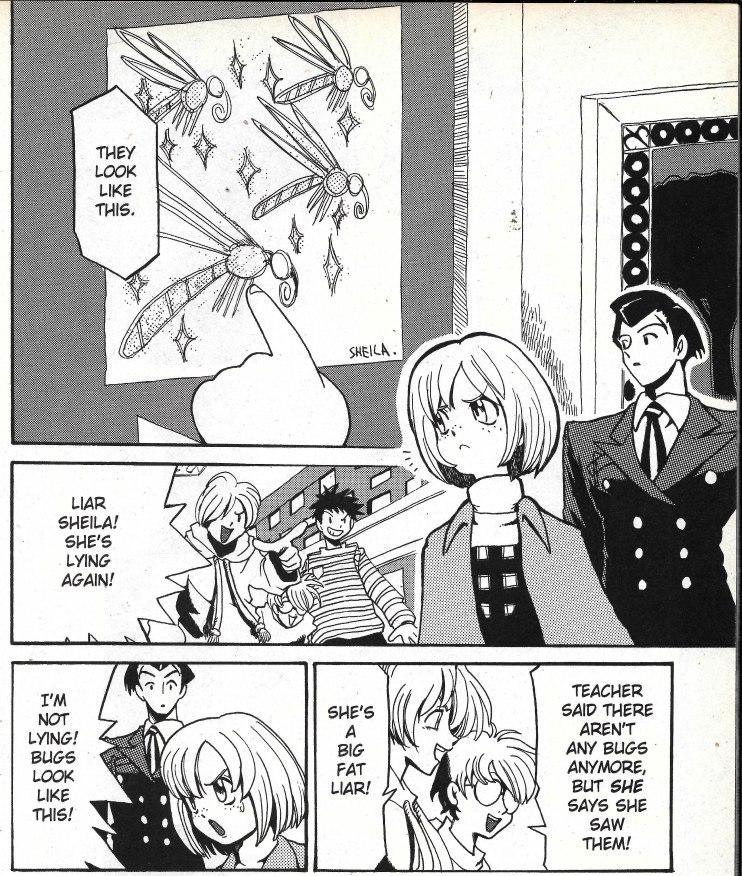 And she claims to have seen the actual bugs. Then suddenly the power goes out and Roger has to console the kids. 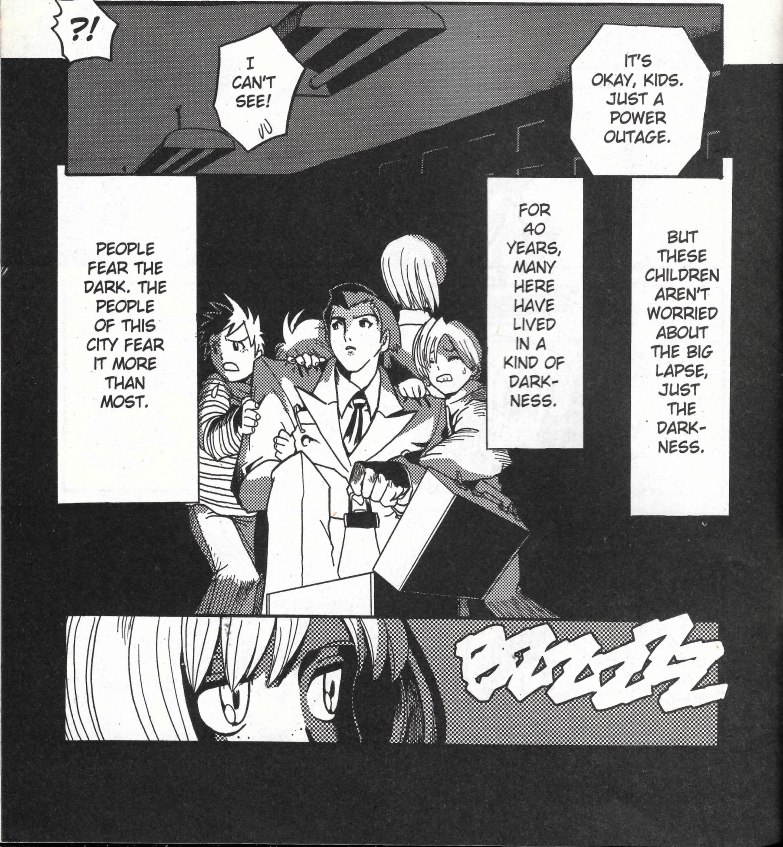 Which earns him an honorary title that I admit caused a grin. 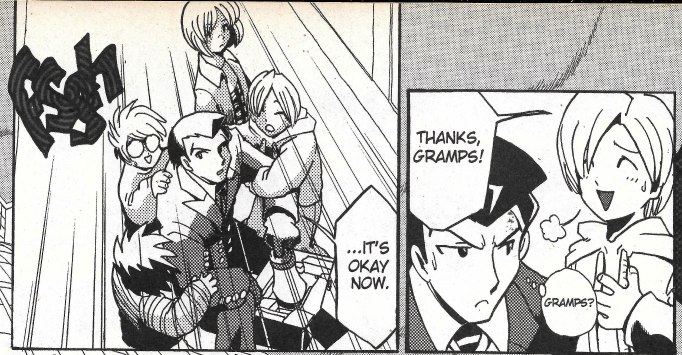 I know exactly how that feels.

But all of this is really just a bit of ham-fisted foreshadowing as The Big O will be facing…well, that's getting a little ahead of myself. Sorry, but I'm impatient for the big robo battles.

Instead we have to deal with Roger's world's social structure and how people have forgotten everything. 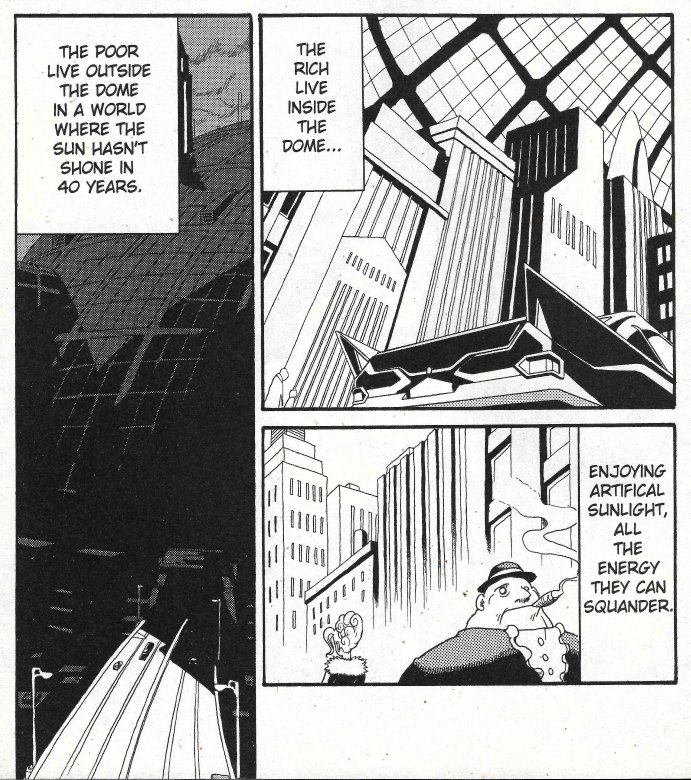 And we find out the Sheila frequently visits Dr. Miller, a crazy mad scientist. Dr. Miller has a few of those bugs she has seen in a jar. 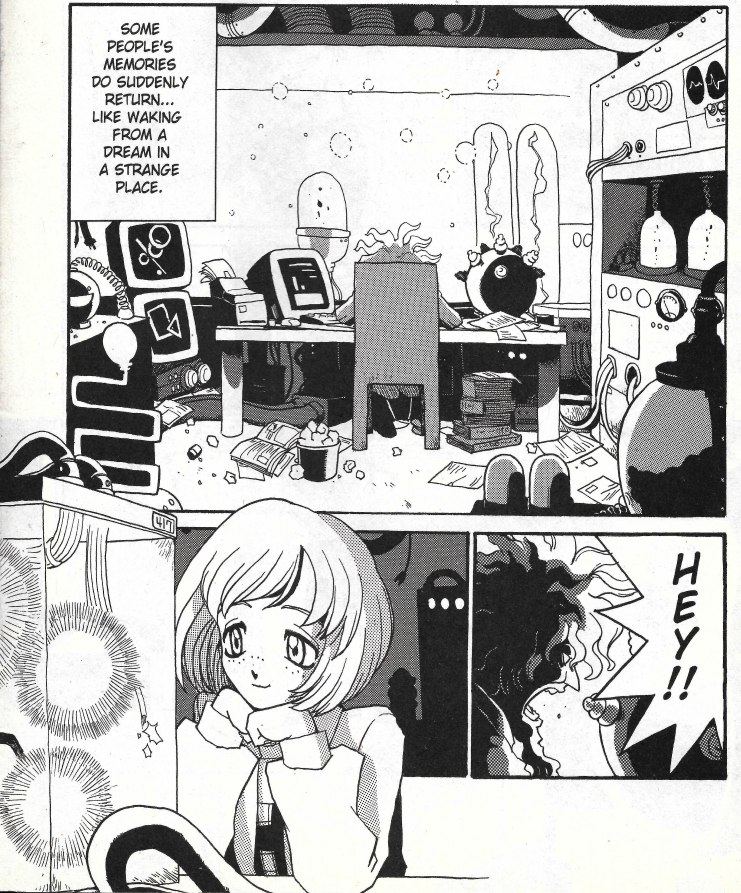 It works out that Dr. Miller is in the employ of the main villain of the series, Beck. Beck's motivations are shady and unknown, but Dr. Miller is clearly one of these mad scientists who is out to prove a theory without thought of the consequences to the rest of the world. And the method of proving that theory has something to do with Sheila's bug friends. 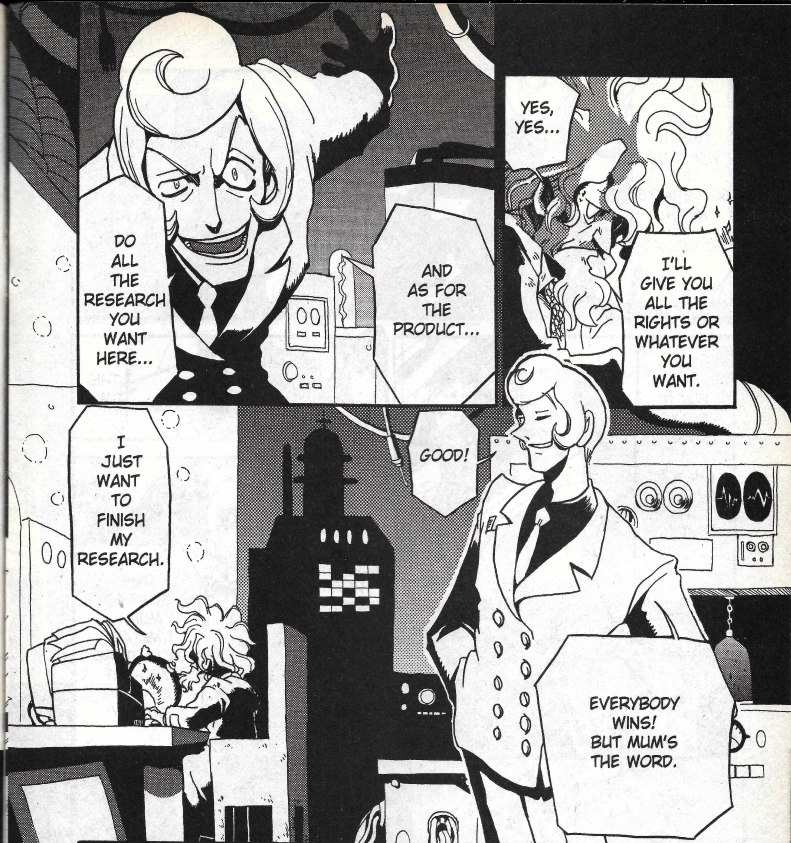 What is it with Japanese characters having hair the shape of cinnamon buns? That hairpiece looks like it came from the Kolache Factory. So odd.

And "breakfast bun-hair" Beck has plans for those bugs, which just so happen to siphon energy. His idea is to depower Big O, which is a "megadeus", and then destroy him. Also the term "megadeus" makes me think of taking a very large number two. 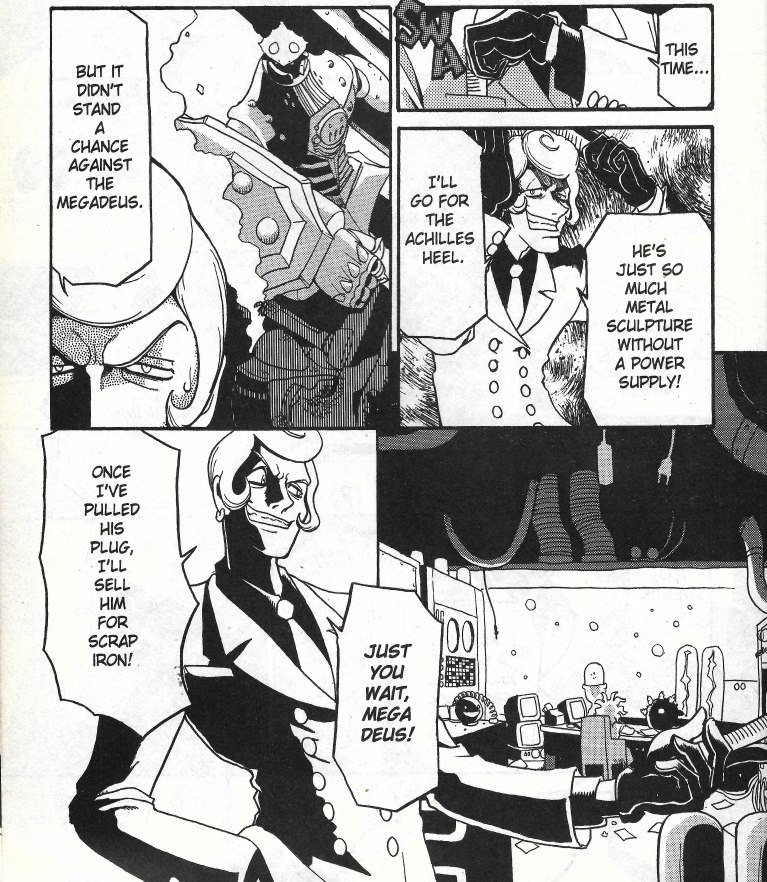 But during dinner, Roger captures (in a very unlikely sequence that shows off more of this series style) one of the bugs that is draining his estate's power. Also we get to meet Roger's butler Norman, who is perhaps the best manservant this side of Alfred. Having been based on that template served the anime well. In fact the dynamic between the two, although stolen or lifted from B:TAS, was one of the strong points of the show. That and Roger always being as cool a cucumber as Bruce Wayne was. If you have to imitate something, I suppose they picked both the right source and did a good job evoking the same feeling. 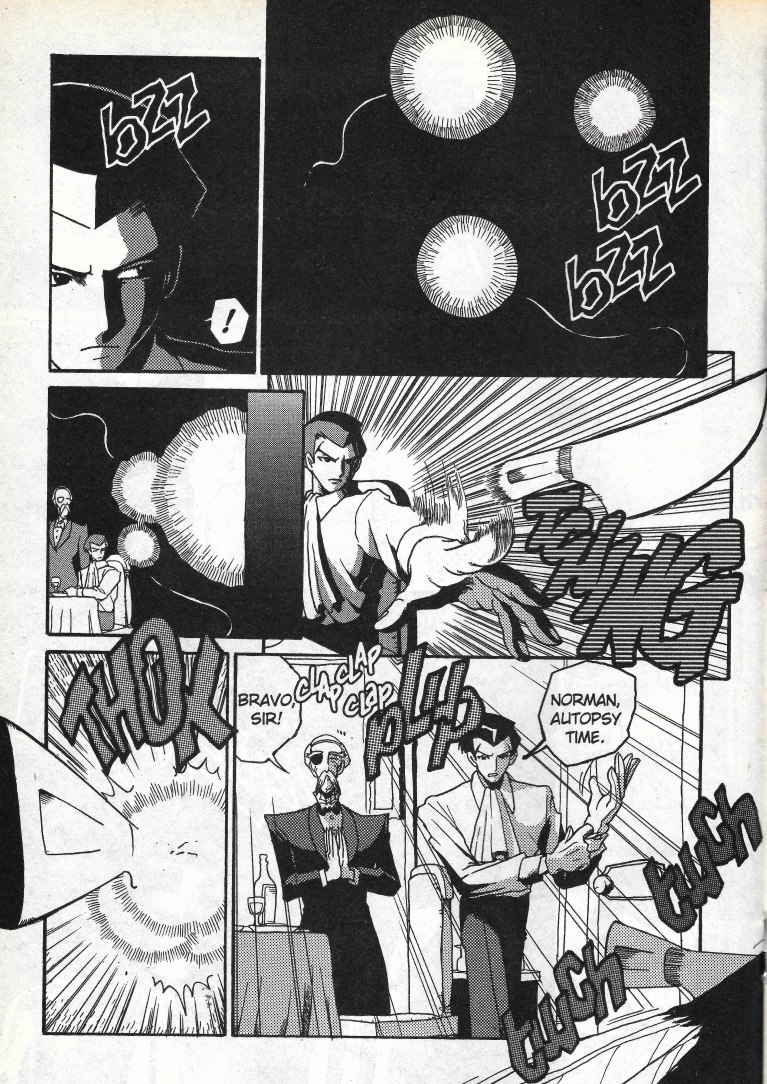 While Roger and Norman ponder and research the bug's appearance, which happens to be of a techno-organic origin by the way... 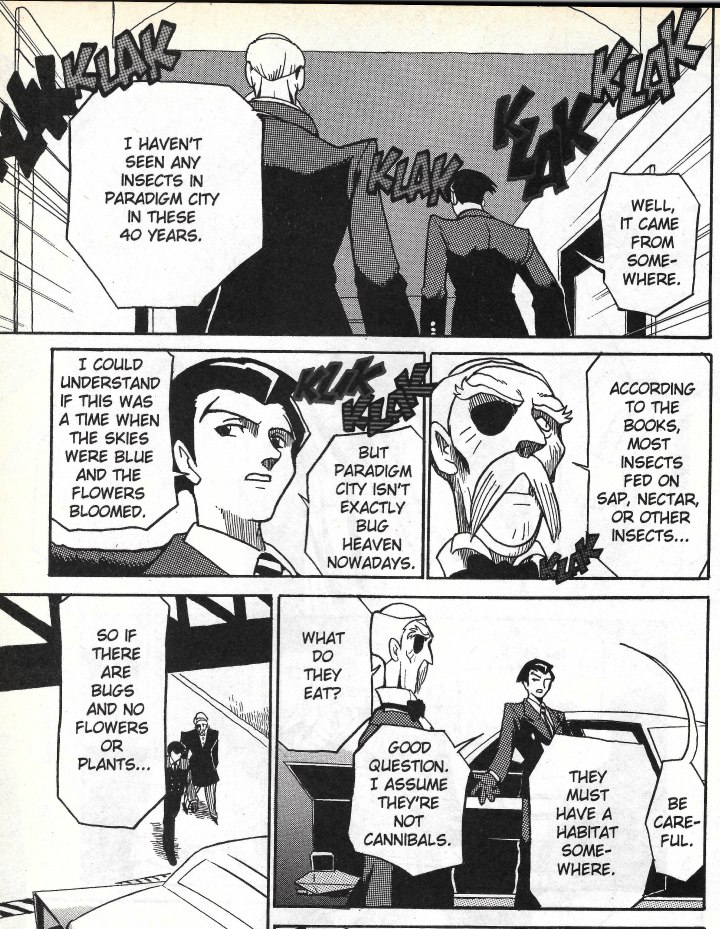 We learn that Sheila let the little fellas loose ahead of Beck's schedule. 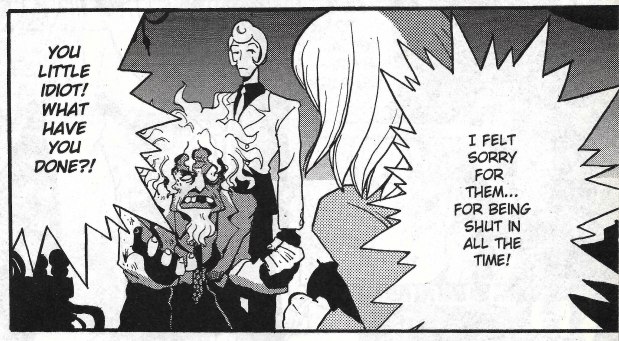 And as Sheila is shunned by her Uncle-Grampa-whoever, the military police try to maintain order and Roger goes on a bughunt in his car, Beck decides to use this opportunity to stop Big O once and for all. 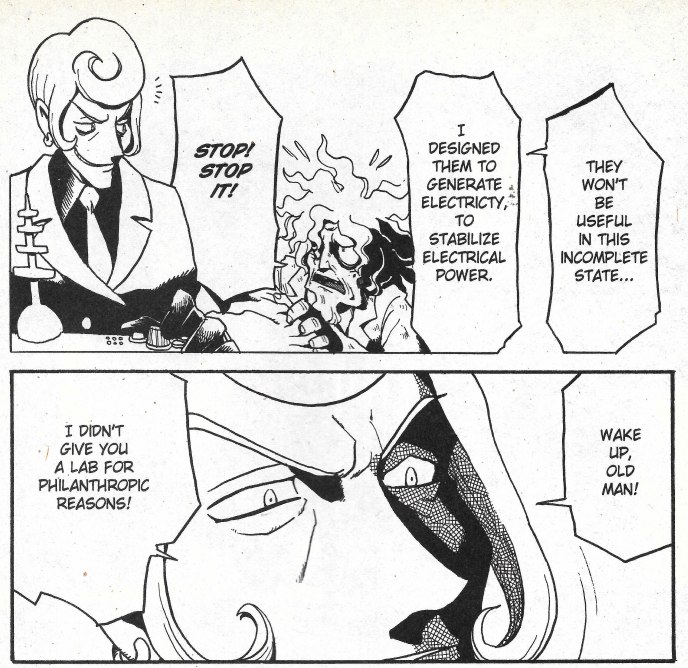 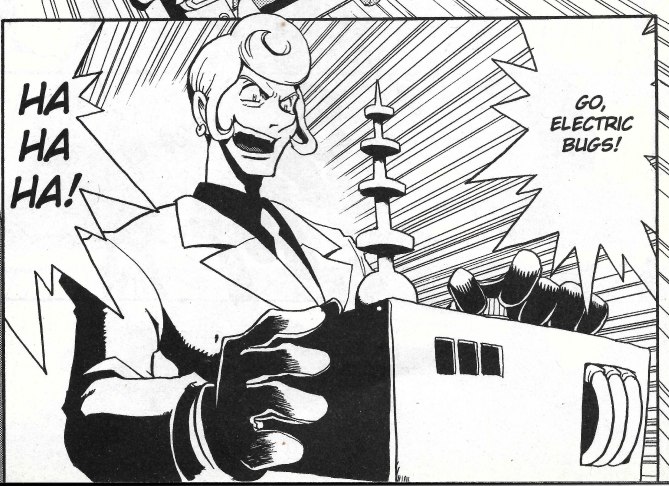 But Beck goes mad with power.
Roger decides the massing bugs have formed something Big O can tackle. (and the entire sequence is kind of cool) 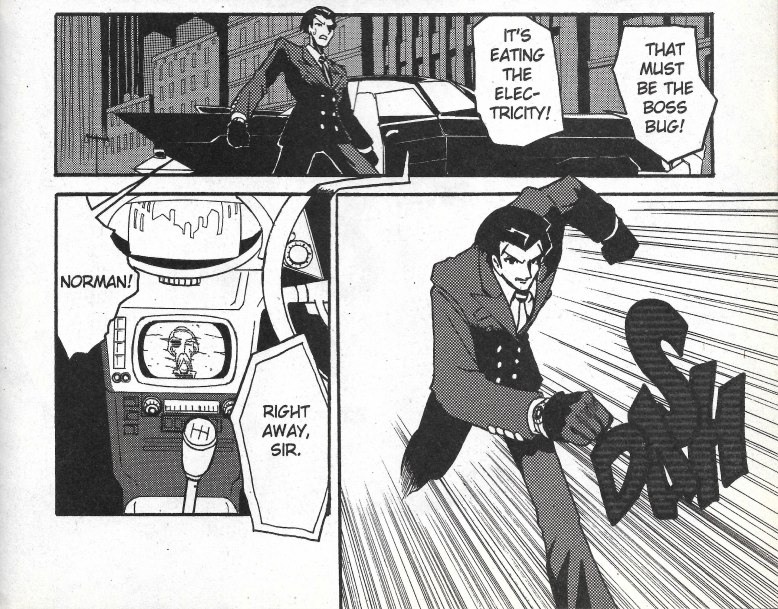 We get that long awaited series catchphrase and "It's showtime!" 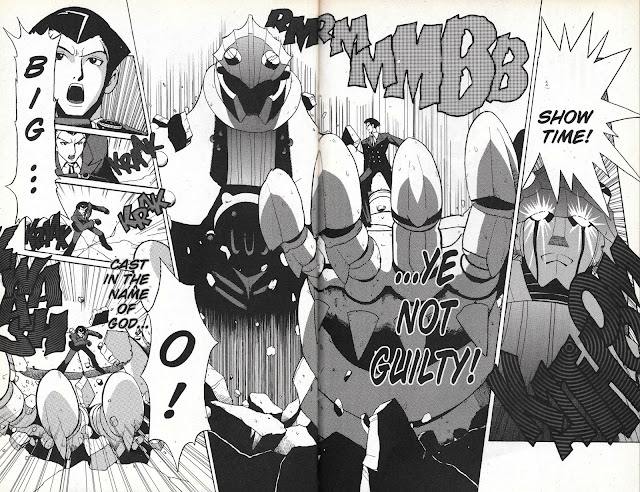 And we end just shy of the massive battle I was hoping for all issue long with Big O shooting it from afar and the shadow bug thing hiding. 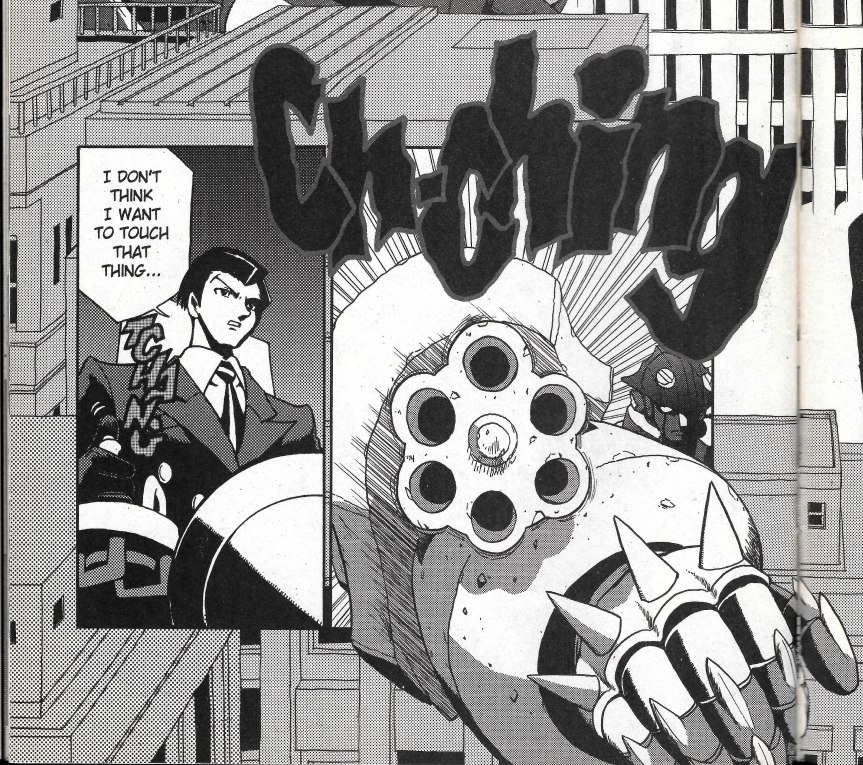 The last page is Roger coming across a glowing building, the mystery of which will have to wait until next issue. 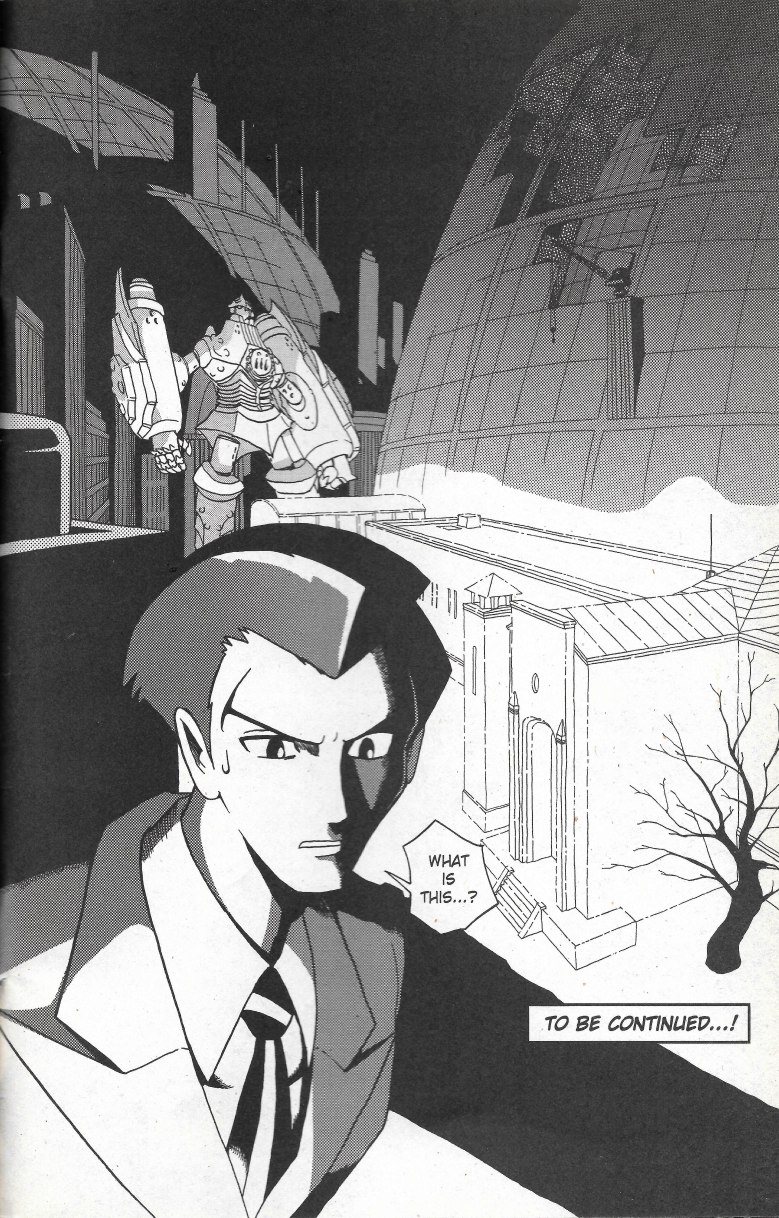 I've begun rewatching these on youtube and they are better than I remember. If you set the bar of your expectations low enough for a coherent plot and just go with the style of the noir vibe it puts out, you'll find a lot to enjoy. Plus giant robot battles abound, and you know that makes SoC ecstatic.
Posted by SonOfCthulhu at 3:40 AM