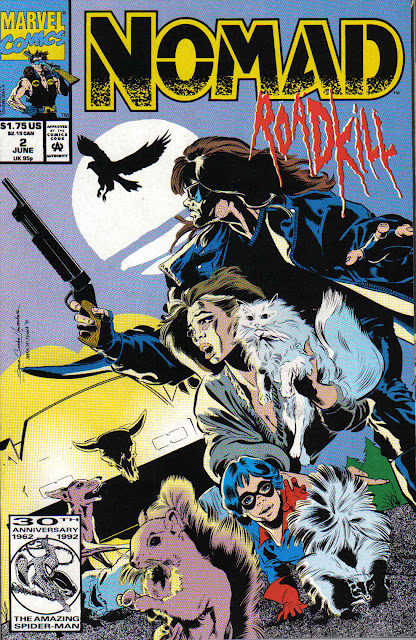 While no animals were harmed in the making of this issue, many were stuck dumb when they accidentally read the finished comic

I said after issue 1 that I thought this series would yield very boiler-plate stories. Issue number 2 proves me oh-so-wrong. It’s still the same “TV’s Incredible Hulk” wrap-around. Nomad still wanders into town, rights wrongs and then ambles down the highway. But this story proved how retarded those wrongs might be. In this story, folks, Nomad beats up hicks who like to run over animals with their cars. He’s like PETA Warrior. (not an actual superhero, at least to my knowledge) 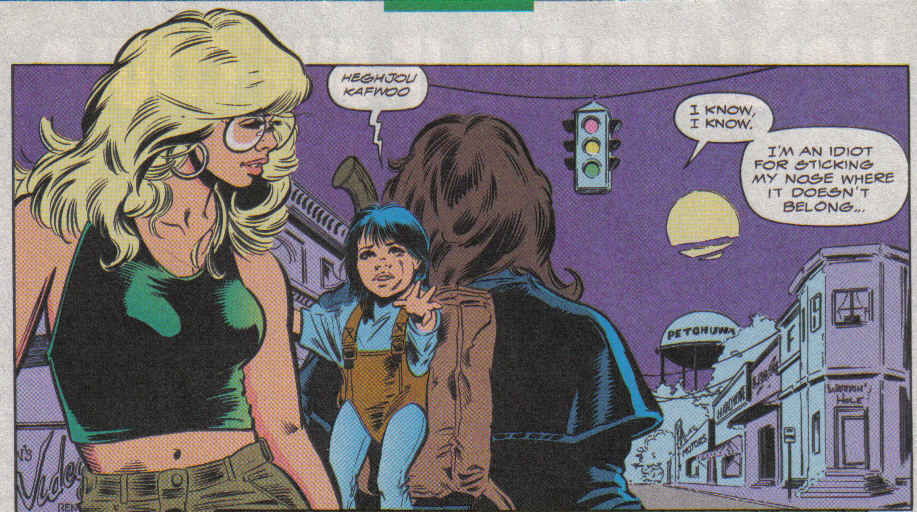 Another thing that hasn’t changed is the 80’s look of all the women walk-ons.
Someone on another board made mention that all women in comics are all depicted like some kind of male fantasy ideal. I mostly agree with that statement when it comes to lead characters, but disagree when it comes to women in the background. They tend to be regular joes. Heck, you can find some examples in this tread even. But Nomad presents every woman as a top-heavy Penthouse model. 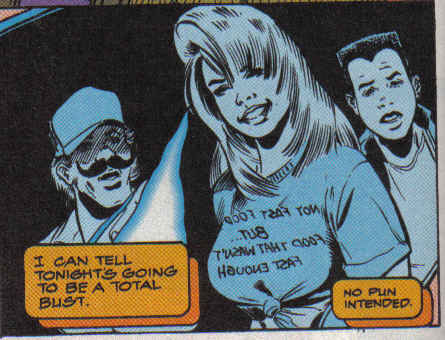 Nomad’s niche of the Marvel universe must be the one where you can get silicon breast implants by saving 10 cereal box tops. Right now I’m re-checking to see if Daniel or Dave Day had anything to do with the art chores. It’s like trying to do a superhero story between the pages of a Playboy mag. And I’ve already told you how silly this story is.
These retarded rednecks like to tie animals up and run over them with their truck. One lone bastion of justice has stood up to them, Ericka the waitress and local organizer of P.A.W. (Protection of Animals in the Wild – which should rightly be POAITW). Here she is at work being harassed by the Bambi squashers. 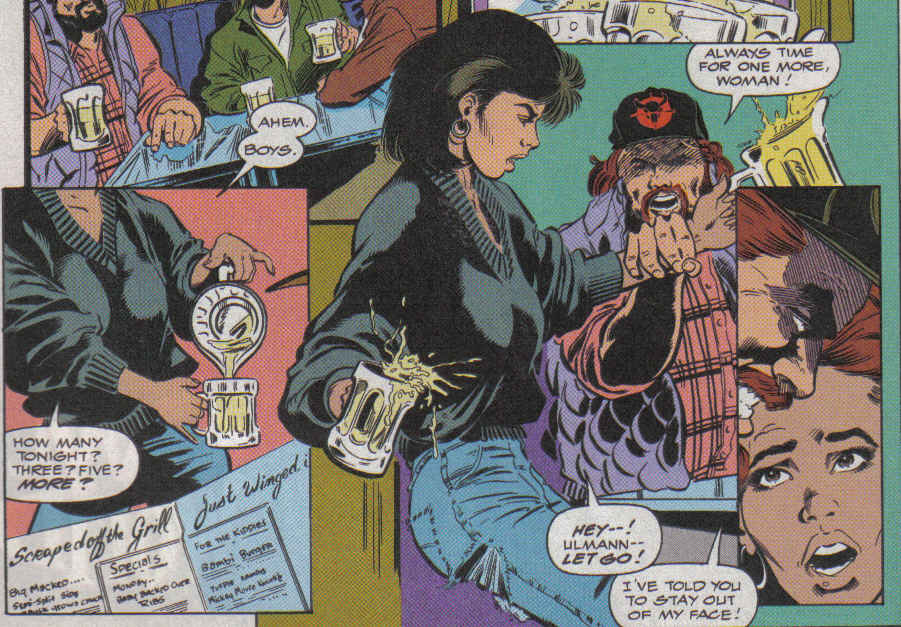 Note the menu offers such fare as “Baby Backed-Over Ribs” and “Big Macked” burgers. Clever. No wait, the opposite of that. Anyway Nomad shows up and scares off her attackers. Later he hooks up with Ericka to get the lowdown on an animal kill he found by the highway. It’s a good thing that he does because (cue dramatic music), Ericka’s cat has been kidnapped! (Da-Don-DAAAN!) So the rest of the issue has Nomad tracking down the cat nappers (wait, is that term right? Or does that mean they sleep a lot?) after first depositing Bucky with Ericka.
The first redneck animal cruelty lover is a dentist. Nomad whacks him over the head and then forces a shotgun in his mouth. Very “Dirty Harry”, Nomad. 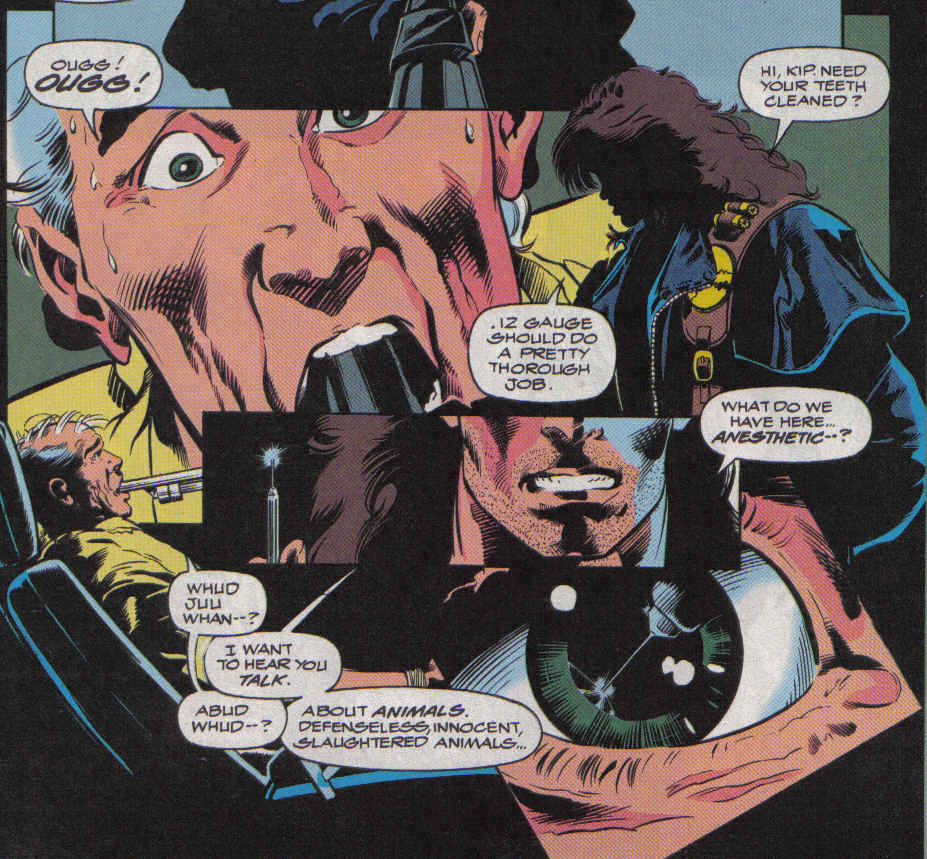 Next up on the “hit” parade is the auto mechanic who rides shotgun. Nomad does something with him tied to a lift. The panels are so poorly laid out I can’t tell if he’s stretching the guy or going to drop a car on him. You help me out here. 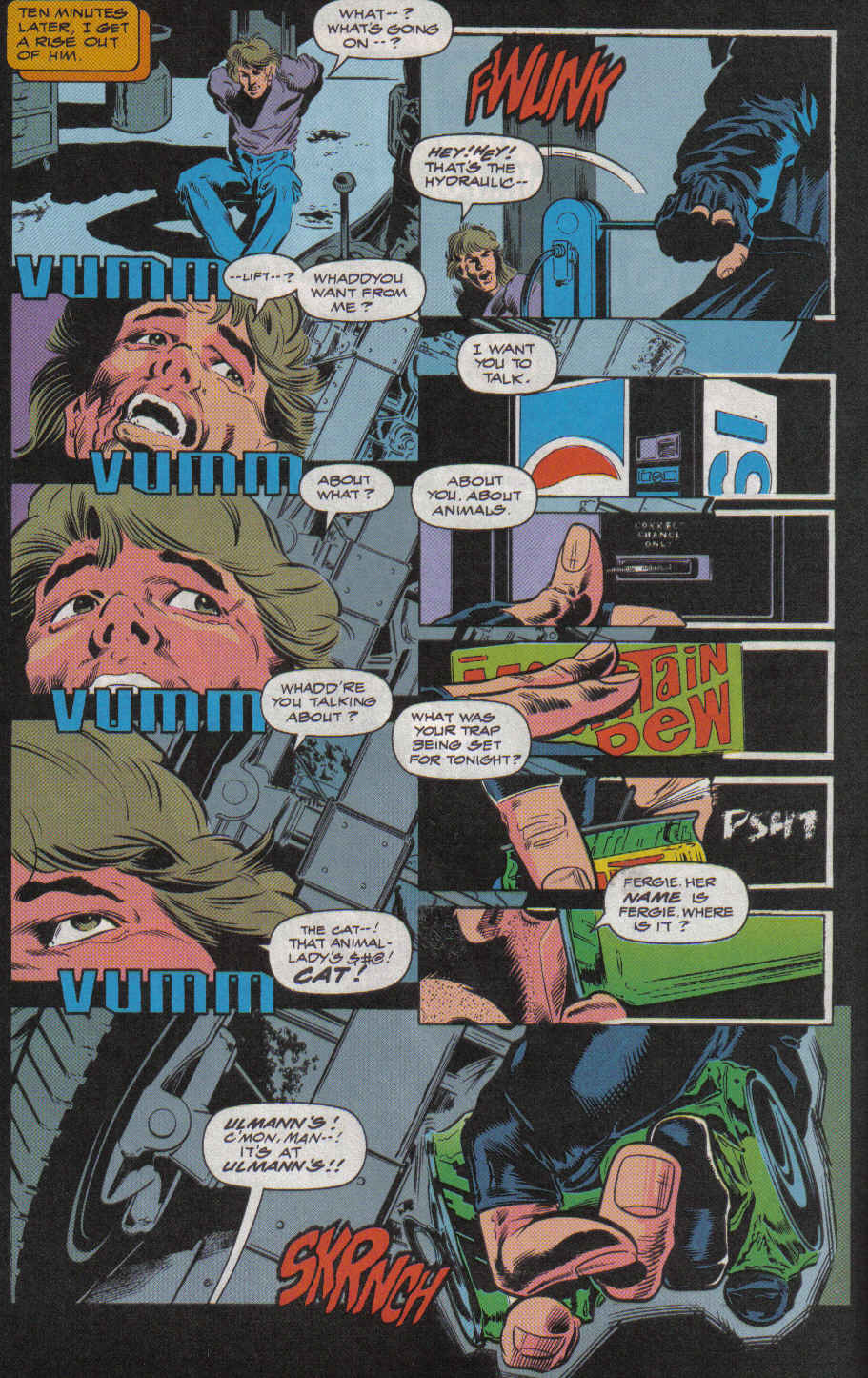 Nothing more intimidating that a man crushing a can of soda. And that’s not just any soda either, it’s Mountain Dew – the most caffeine you can get in a non-energy drink soda. So cough up who’s got the cat mister!

So Nomad proceeds to Ulmann’s in search of some pussy (sorry, I couldn’t resist) only to be confronted by his two killer Dobermans. In the spirit of the animal love-fest this magazine is trying for, Nomad smacks them both in the head with his titanium-steel stun disks hard enough to render the dogs unconscious. Then he confronts Ulmann, beats him up, releases all the animals he’s got in pens and rescues Fergie the cat. Ulmann is somehow left a shattered man because of this and is subsequently raped by a pack of squirrels he held captive. 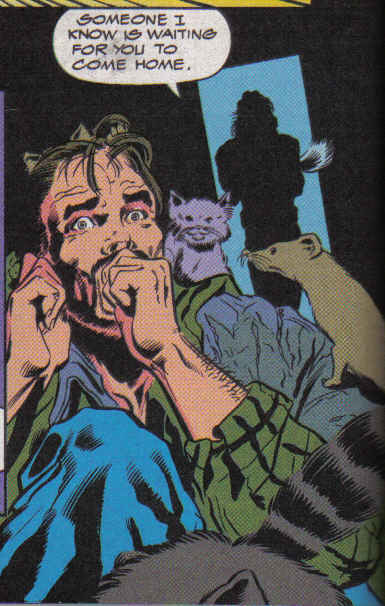 The last page gives me some hope as next issue features John Walker, known to Cap readers as U.S.Agent. Some superhero serum on superhero serum beatdown action is just what this series needs about now.
Posted by SonOfCthulhu at 3:37 AM