Since it's almost time for Alien: Covenant, I thought it might be time for: 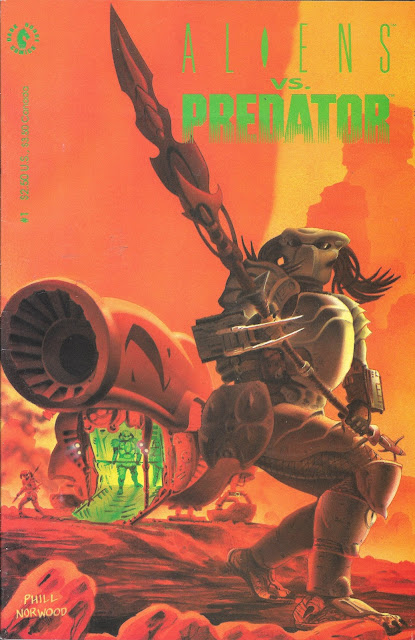 How could Hollywood screw this up?

The comic came first. I remembered it differently, but that's because I'm old. This came first, though. The dates confirm it.

I collected these as a kid, because Alien was and is my favorite movie of all time. It is a perfect film. Sound effects, score, practical effects, set design, acting, script, direction, casting, lighting…Alien is perfect 10's across the board.

So yes, I collected these and many other artifacts from that galaxy of terror. I was selective though. If the item didn't meet my standards, it got dropped. You don't blaspheme against a man's religion.

I loved Alien and that universe with that type of fervor.

At this moment, Dark Horse had put out many Alien stories, most of which were in the black and white anthology magazine Dark Horse Presents(DHP). I have a few of those, but had elected to instead collect them in Trade Paperback when it came available. I do have a complete set of Aliens, Vol 2 Nightmare Asylum, with its stunning illustrations by Den Beauvais.

Great series that is now non-canonical due to it being the continuing adventures of Newt and Hicks, which…well, that just doesn't work does it?

So this came out first, just not before those. DHP put out some an introduction to the concept in issues beginning around 36. The storyline was a short look at how these two races interacted. It began with two crewmen on a Chigusa owned, Nostromo-type vessel, engaging in a conversation while their path is crossed by a Predator vessel hurtling through space. Inside the vessel is an alien queen, fully restrained and egg sac laying eggs onto a convoluted conveyor belt. The belt tests each egg, queen eggs are destroyed while drones are allowed to pass.

As the reader watches, the queen uses her abdomen to push the mechanical claw so that a queen egg passes unnoticed and a drone egg is destroyed in its place.

We then follow the cycle of the automated "egg laying" lander that puts the eggs out on a planet's surface, the local animals get some facehugger lovin' and chestburster fever, and this is followed by the Predators hunting the alien drones in a "rite of passage" thing for their young. If the Predator youth survives, they get branded on the head using an alien's acid-tipped finger.

It was a very well done short story and Stradley, Norwood, and Story did an impressive job setting this all up for the limited series that would follow.

And here we go. We begin with a Predator seed ship descending on the planet Ryushi. 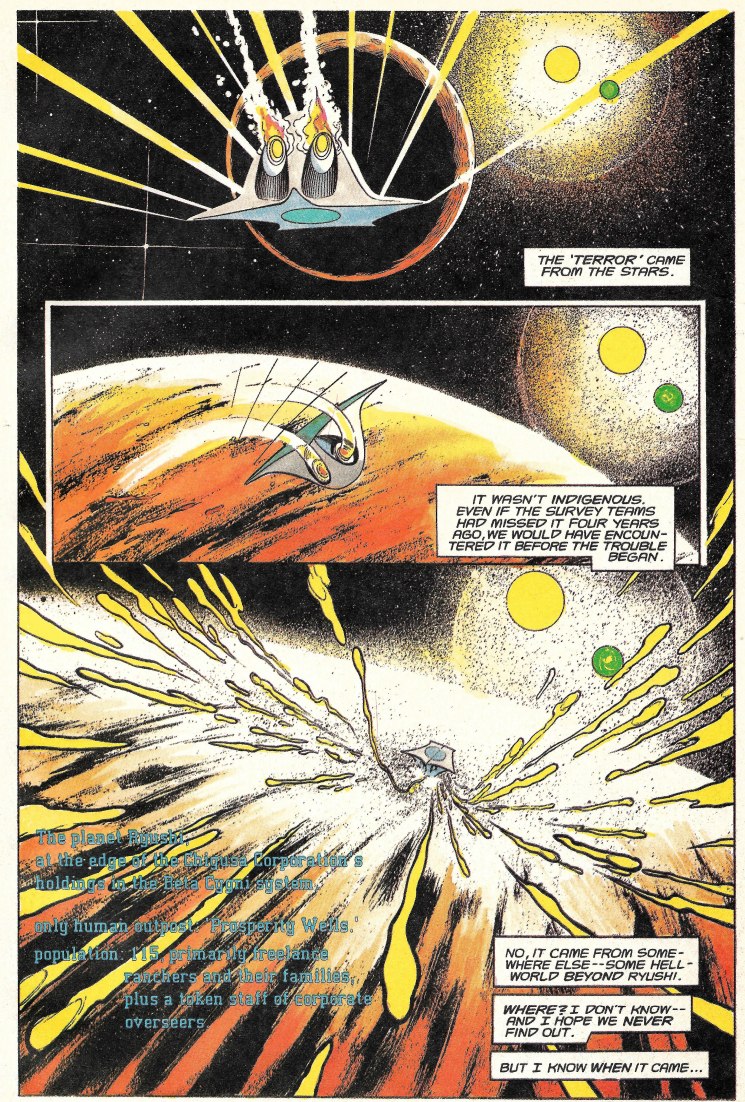 Ryushi is a harsh desert world. It's also colonized by humans. This is million-times better than having AvP take place on Earth. Sure the stakes as smaller, but that doesn't negate them. You can show the colonists in any way you please and gain sympathy for them on a personal level.

I hold in contempt the writer that placed AvP: The Movie on current-day Earth. It made the ending a foregone conclusion because you know the Aliens have end up dead and destroyed before being discovered. Otherwise the future Ripley and the marines would have documented evidence of people encountering the Xenomorphs before. And it negates the stakes of worrying about them making it to Earth if they have been here for centuries.

And by placing it on this remote, desert world, we don't know how this will end. Don't write yourself into a corner, especially one the audience can see coming a mile away. Especially one that negates the reason for the first two Alien movie's secondary suspense draw: the Aliens mustn't reach Earth.

Oh, and getting back to those humans…they appear to have noticed the object as it crashed on the planet. You know what this will mean? 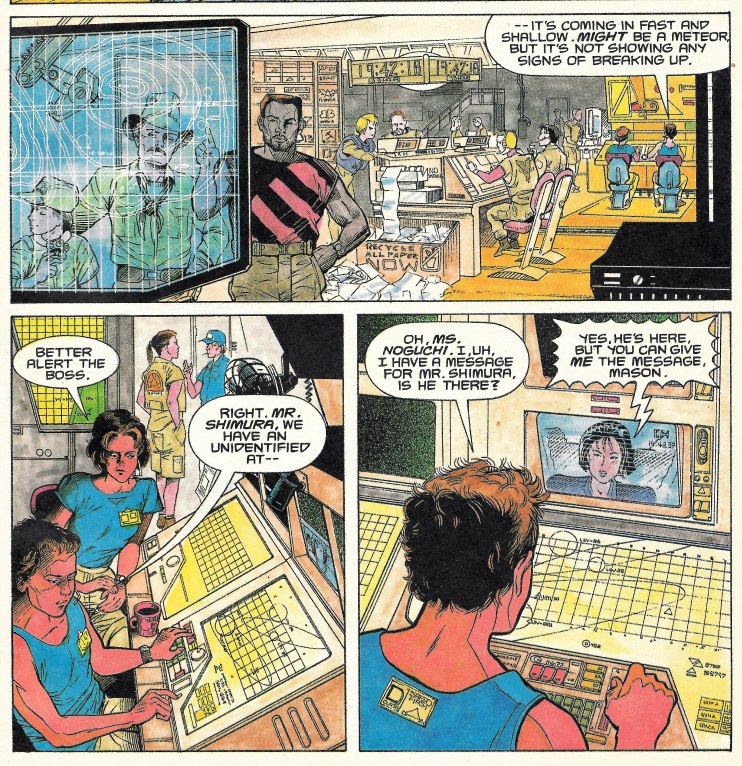 Time out for props to Phil Norwood's amazing pencils. I prefer them in good-old black and white, but I want to point out that he does astonishing work here. Norwood is a Hollywood storyboard artist and animator whose done work on everything from Filmation's Tarzan/Lone Ranger/Zorro Adventure hour to the Den segment of Heavy Metal. He has storyboarded The Abyss, Terminator 2: Judgment Day, True Lies, Batman: The Animated Series and many of the other Timm DC shows. Having him on to do this five issue mini was a BLESSING.

Another blessing, Randy Strandley's handling of the writing chores. It continues to astound me when I find such high caliber books in the bargain bins. Why are these over looked?

Anyway, Meet Machiko Noguchi. She's taking over running this colony from Mr. Shimura. However that transition appears to have hit some bumps.

And Mr. Shimura has some friendly advice for her. "Get out more and press the flesh" is what he's saying. If only he knew where that will lead. 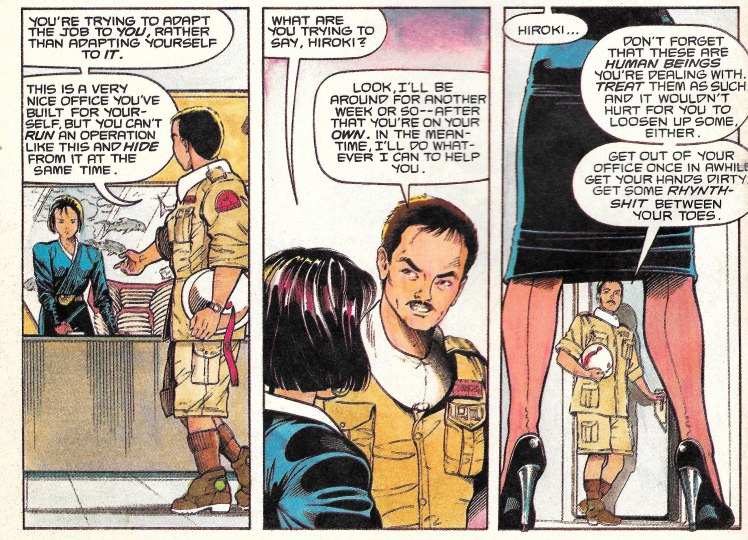 Across the plains the Predator craft begins the task of creating a few Xenomorph targets for the hunting party. Little do they know that one of these eggs contains the queen embryo that the brood mother sabotaged the machines to get through. 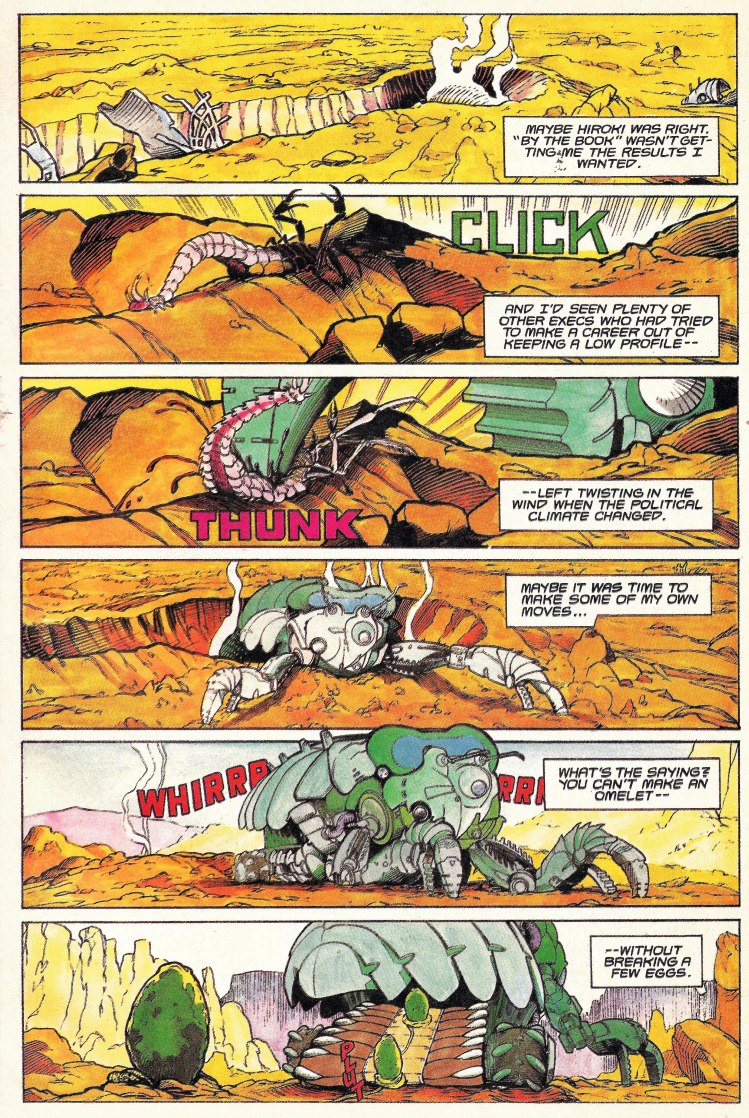 This won't be a normal hunt.

Shimura meets with some ranchers who raise hers of rhynth, large rhino-like beasts bread for their meat. They are upset. There has been a substanial uptick in the price of rhynth meat and are threatening to tear up their contracts. The talk turns ugly as they bring up Ms. Noguchi. 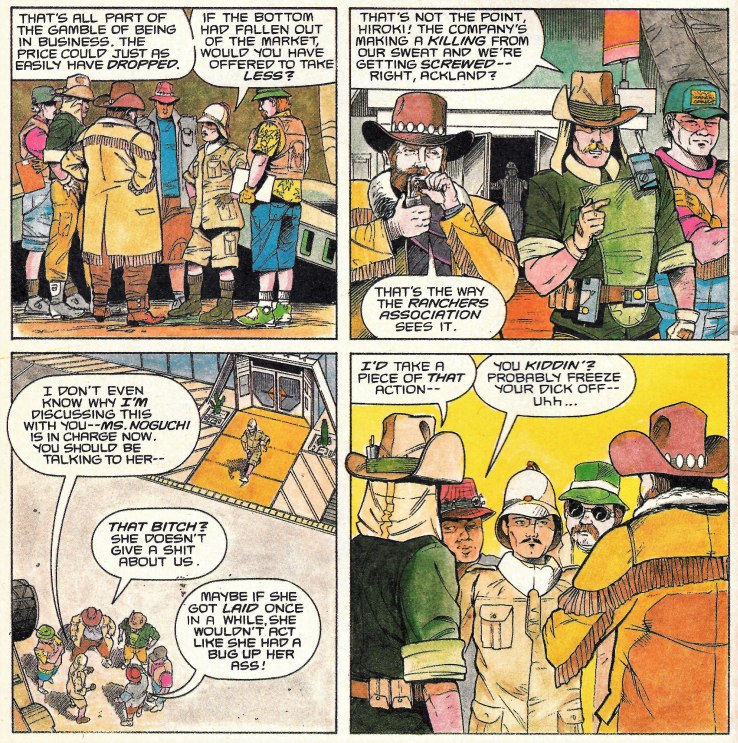 Who happens to take this opportunity to step out to deal with the ranchers face-to-face for the first time. 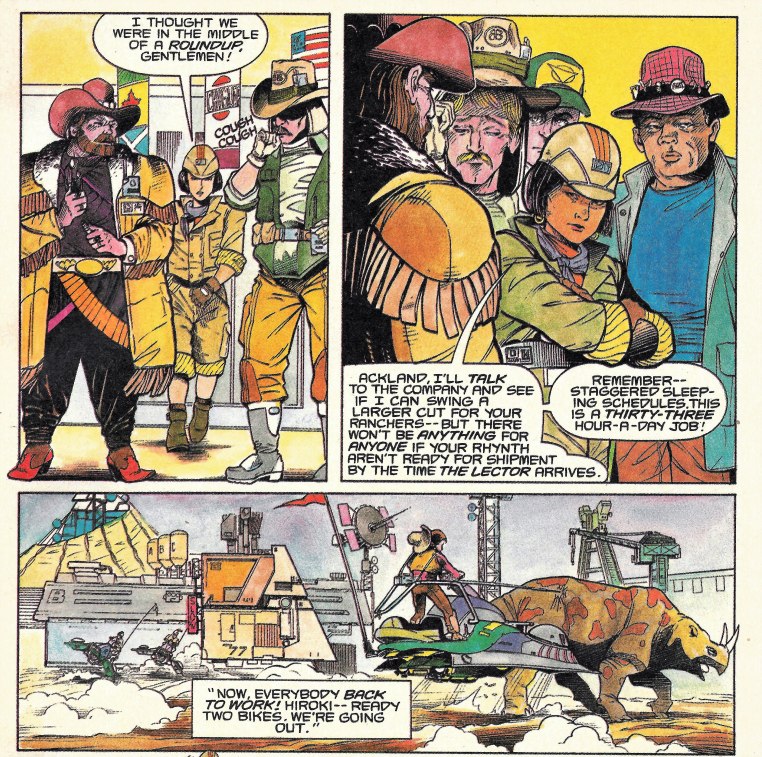 Not sure if the ranchers believe her or not…but man this story is so much like an actual big-budget movie. Deep motivations for every character, beyond just being scenery. I'm loving it.

But while we are investing so much time in the ranchers, their flock of rhynths have found something deadly for everyone. 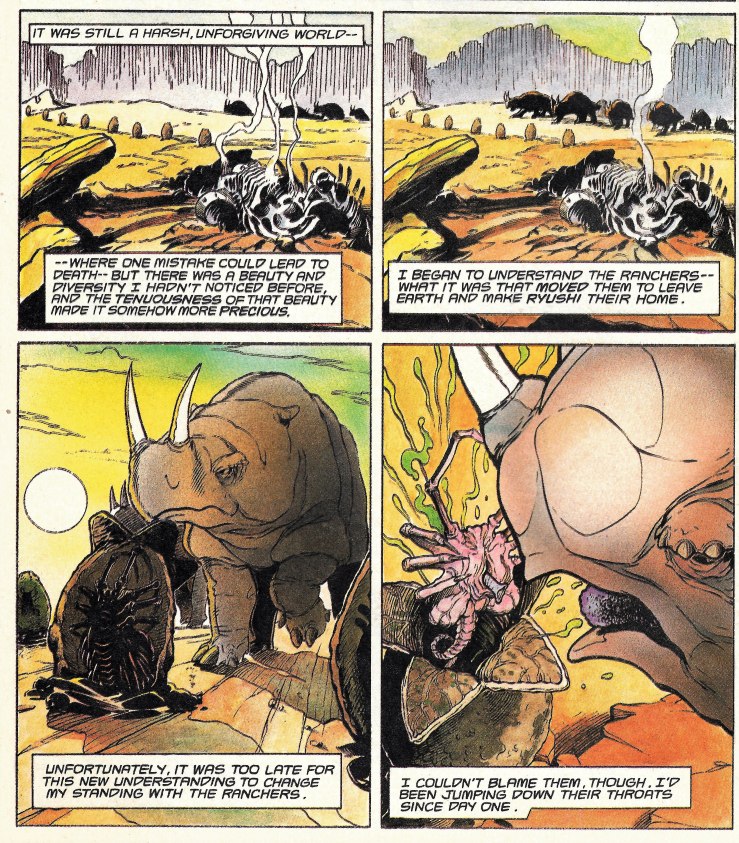 Yup. Here we go. Love how panel three there shows that in the setting sun you would see the translucent quality of the Alien egg and the coiled up facehugger within. MAN this would have made such a great movie!

There is a moment of real, genuine human interaction at the first camp of the day. Ackland, Machiko and Shimura are given moments to just be real without anything forced. 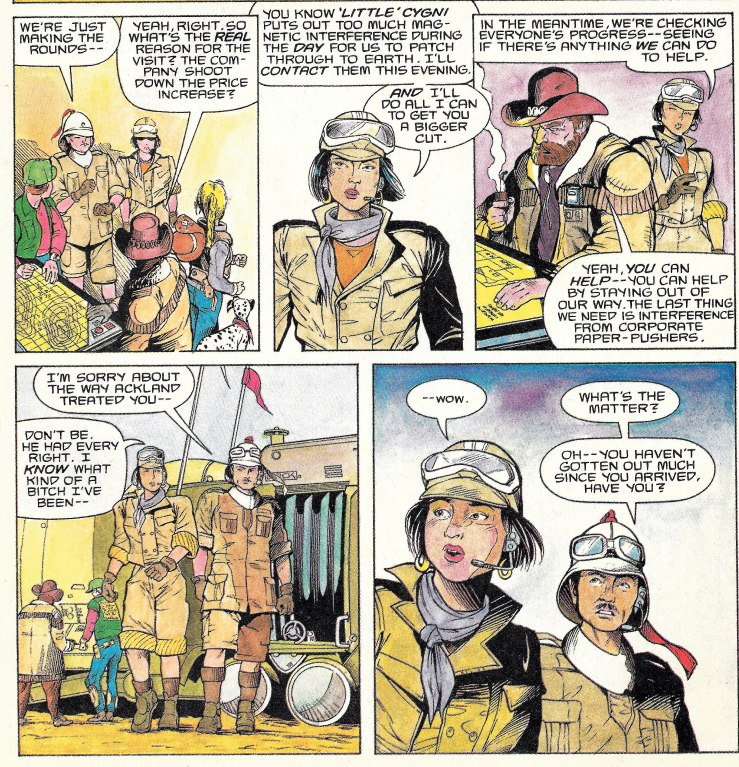 After watching the twin sunsets from the colonists eyes, we skip out to space for the view from two very different ships. The freighter Lector from the miniseries arriving to pick up the rhynth "cattle" and… 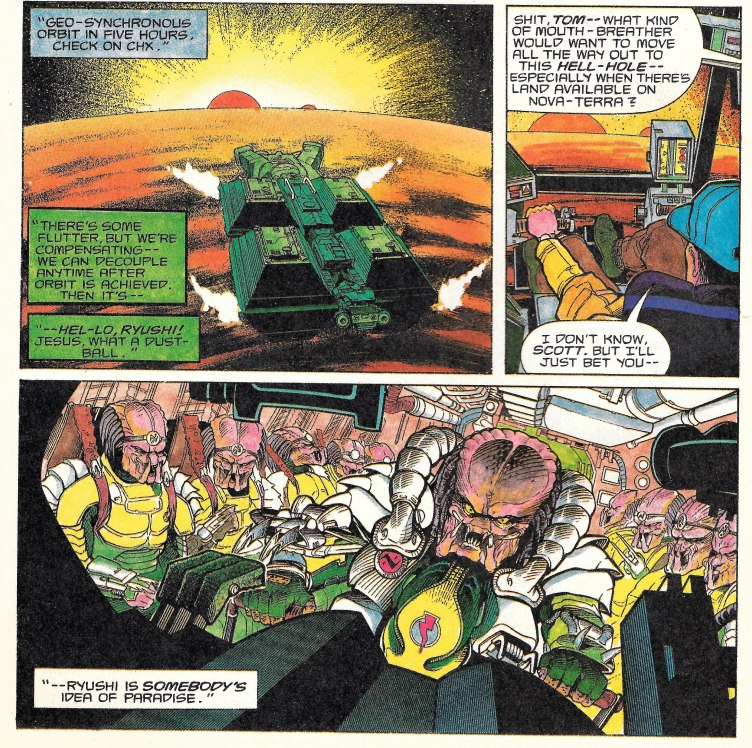 …the number 2 act from out title. A full contingent of Predator warriors geared up for the hunt.

While Machiko receives word that the head of Chigusa will be arriving on the Lector to check out the colony, Ackland gets a much more troubling call from one of his herders. Seems she's found some interesting new life form. 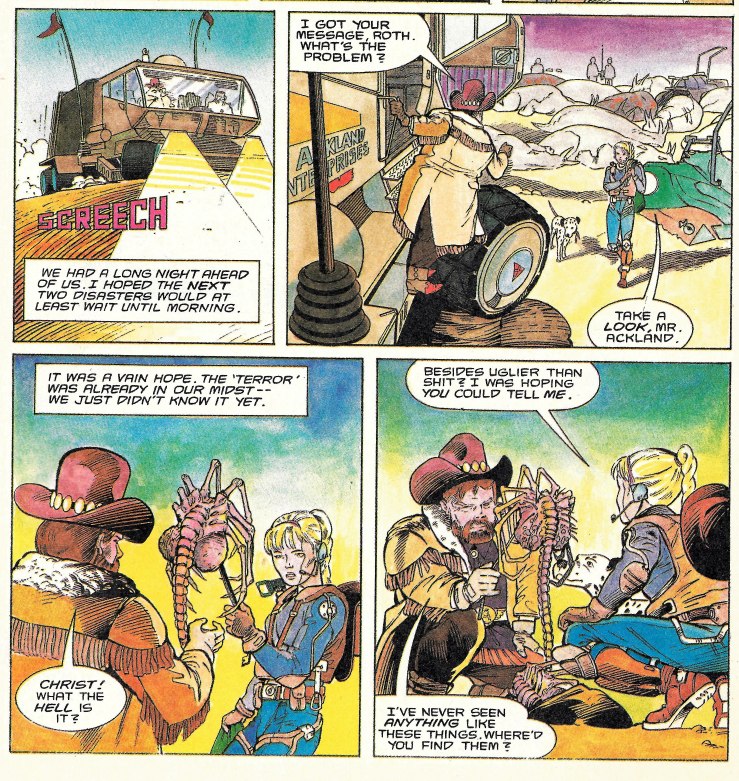 We know where this will end up going. 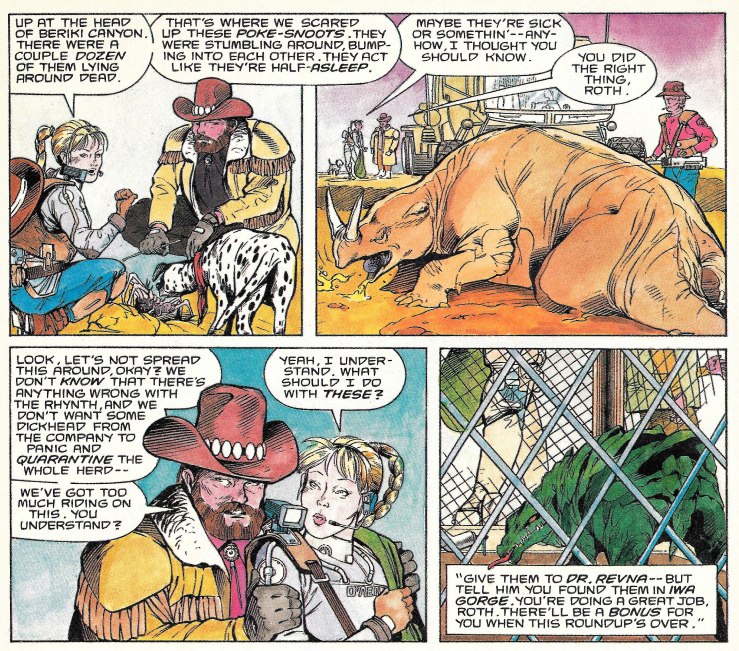 Oh, and some of Ackland's rhynths appear to be sluggish and sickly acting. Yeah, so they cover up where Roth found these. Dr. Revna is VERY interested in her new find, too.

This book is long on showing how this planet is like a city in anytown, USA and I'm digging the heck out of it. Sure pages like this move the plot along very slowly. But they do so by creating a higher set of stakes. This isn't just 10-12 company people who will be affected by the bloody battle that will take place between these two races. This is a town that will soon be under siege by unimaginable horrors. 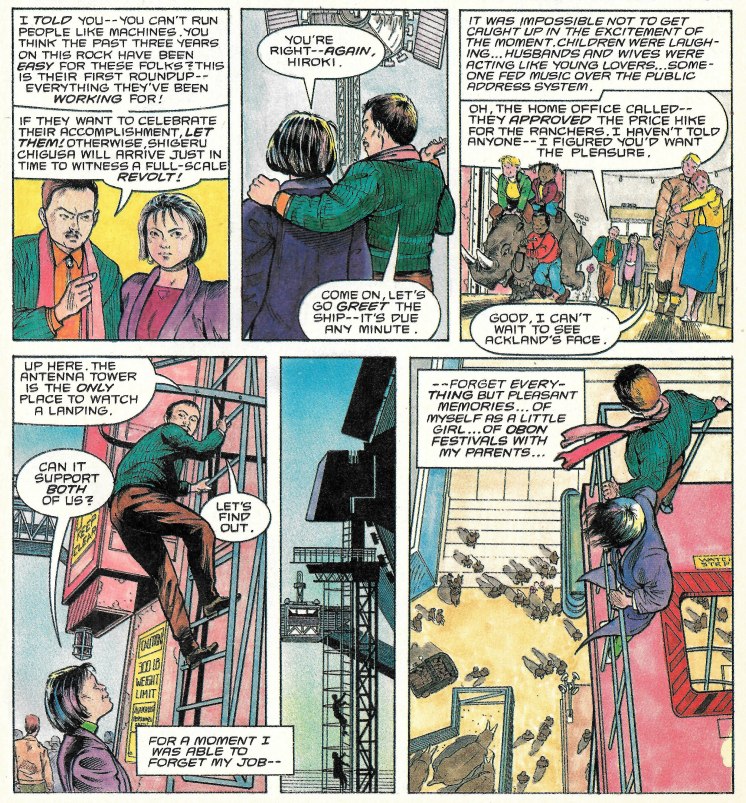 The suspense ratchets up with each page.

And as the Lector lands, we meet Captain Strandberg (or Captain asshole, as we will soon dub him) and his co-pilot Scott Conover. They both hold a dubious honor between the end of this issue and the beginning of next. 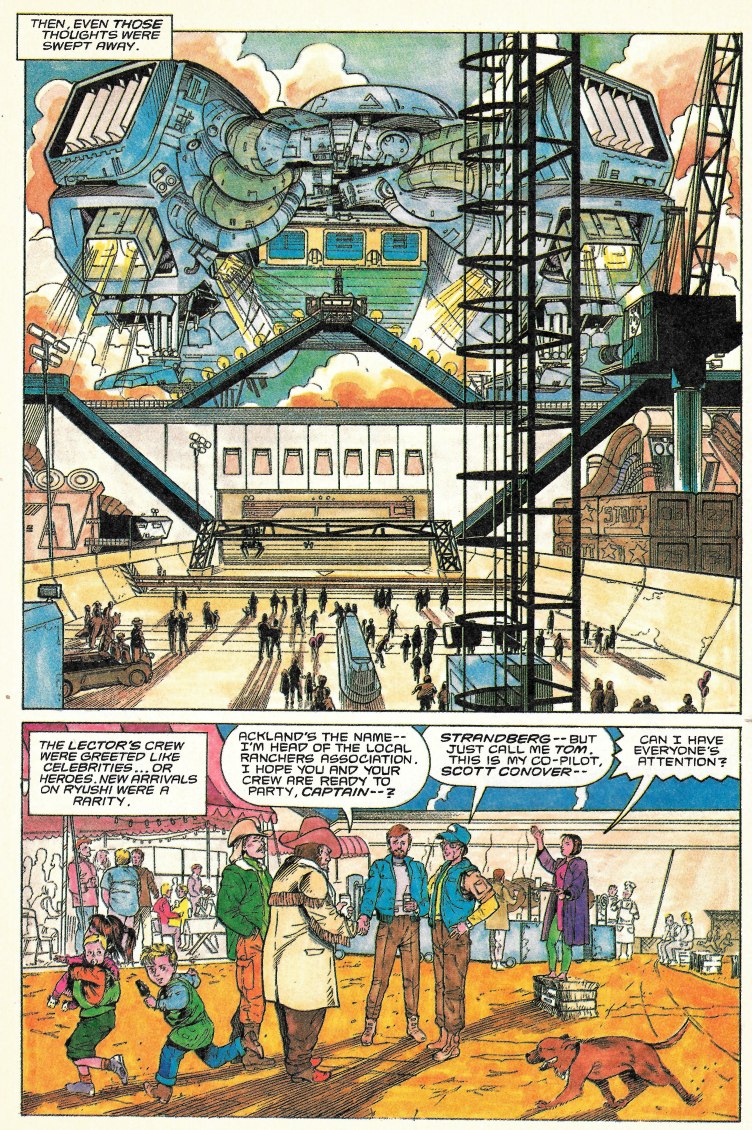 Right now though, Machiko has some news to share. 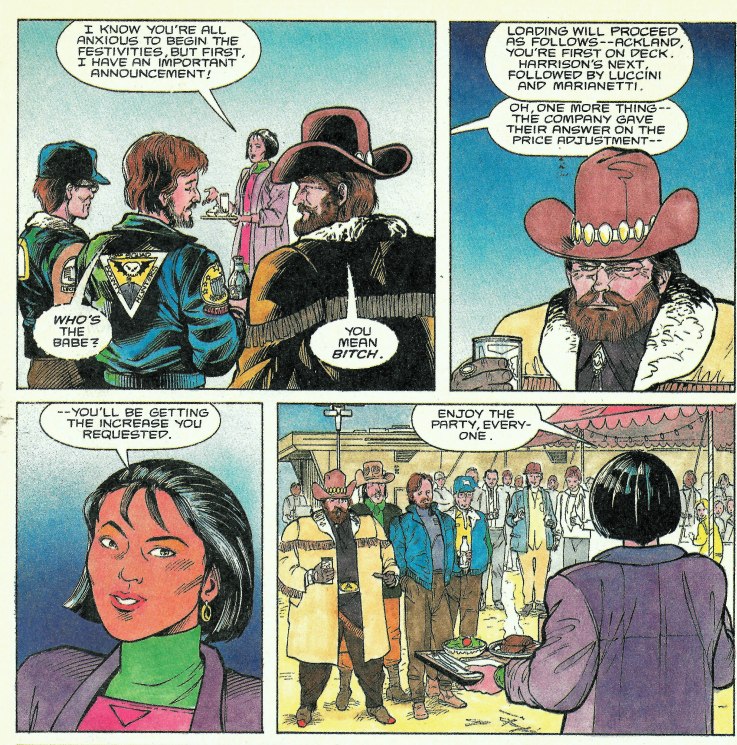 Even this news doesn't soften the rancher's appraisal of Mahiko, but note that Captain Stranberg is already showing his jerkface colors. Be patient, is all I have to say. 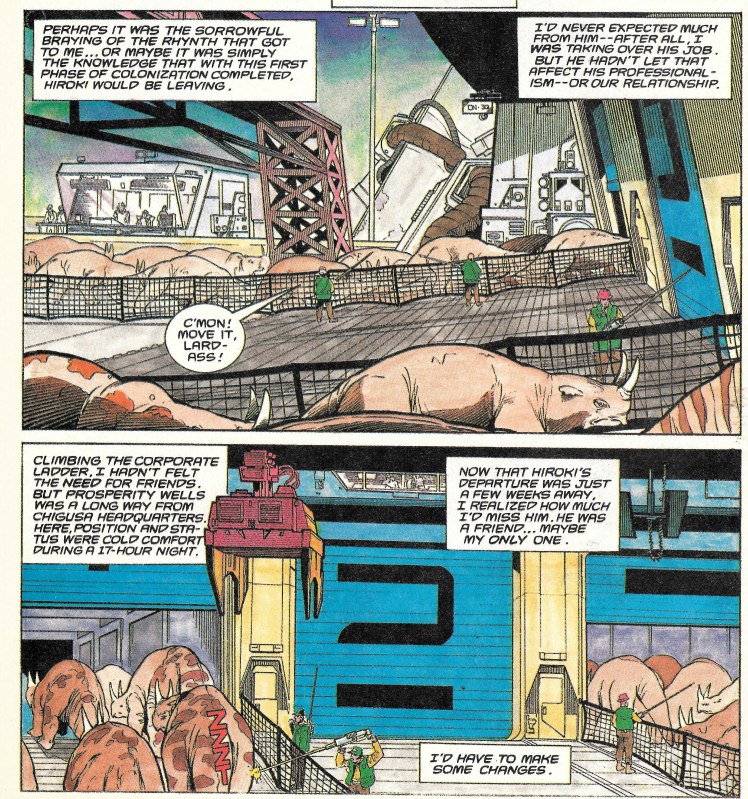 And these rhynth will come to no good end other than someone's food supply. Just "whose dinner" is what is in question.

When the boarding finishes, Machiko gives her crew a break for the night to attend the rest of the festivities. Before they leave, she asks about the whereabouts of the animal doctor. As they tell her, we see he has gotten in over his head searching for new lifeforms. He's found some, but he definitely isn't equipped to handle them. 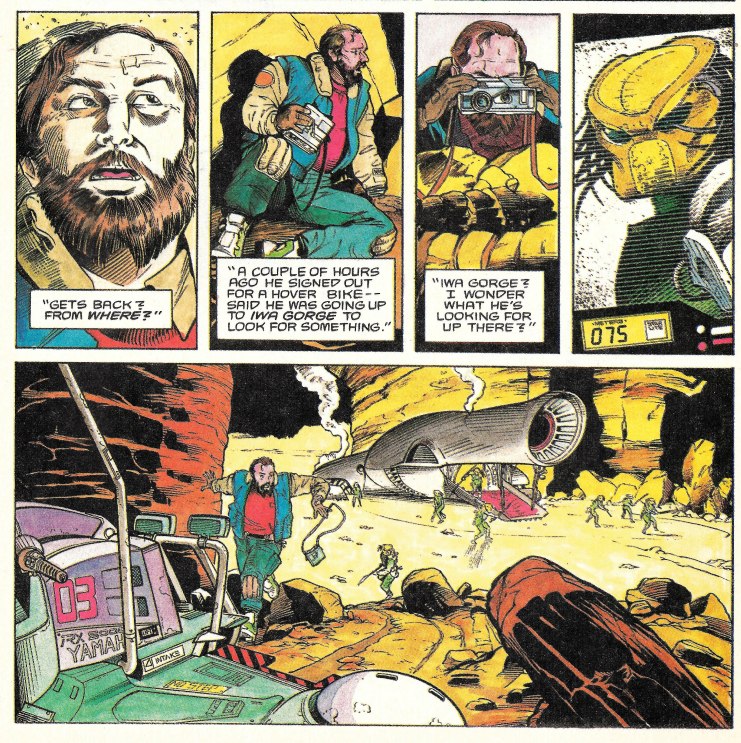 The Predator have arrived, so the party can now officially get started. Luckily for our vet they haven't seen him yet. Now if he just doesn't make too much noise starting up his bike… 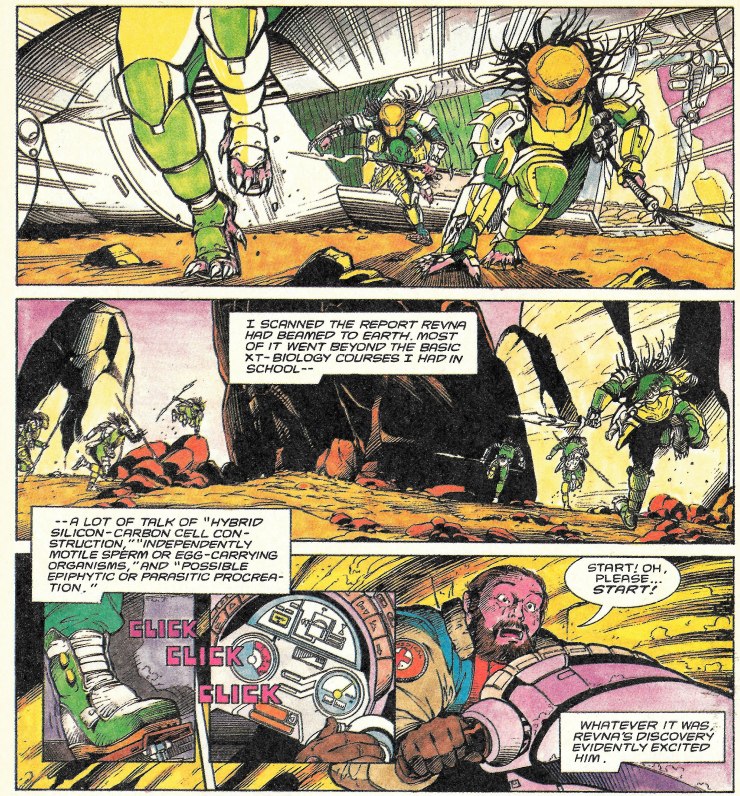 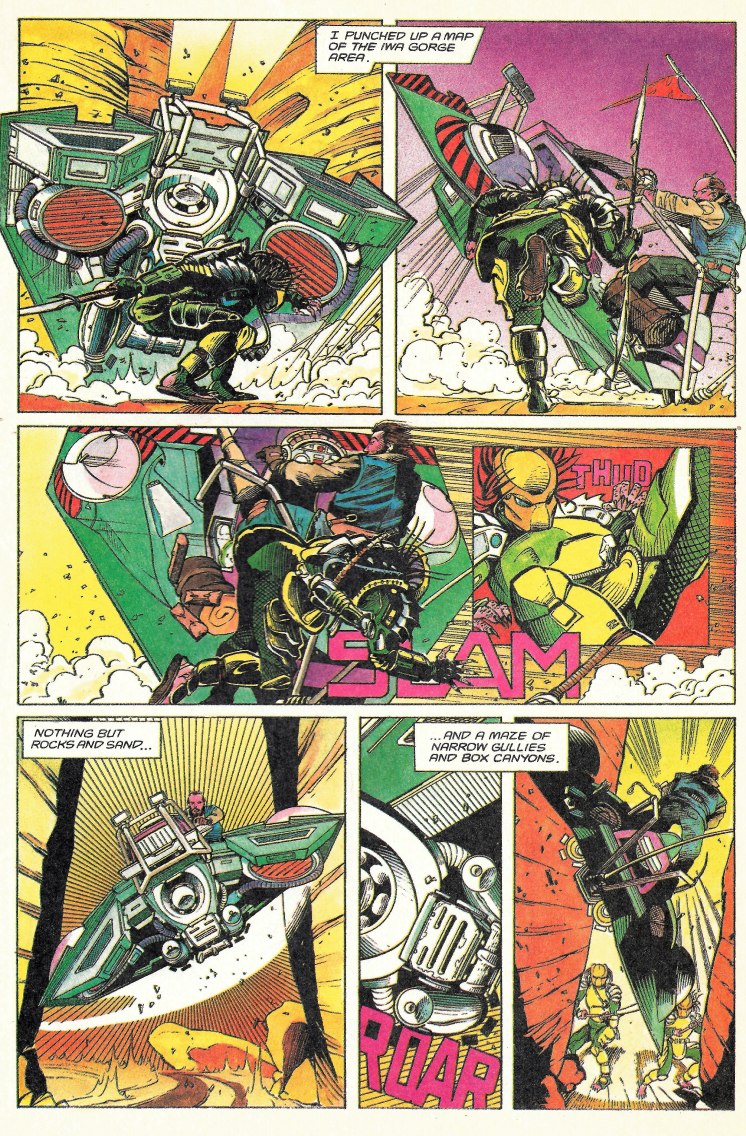 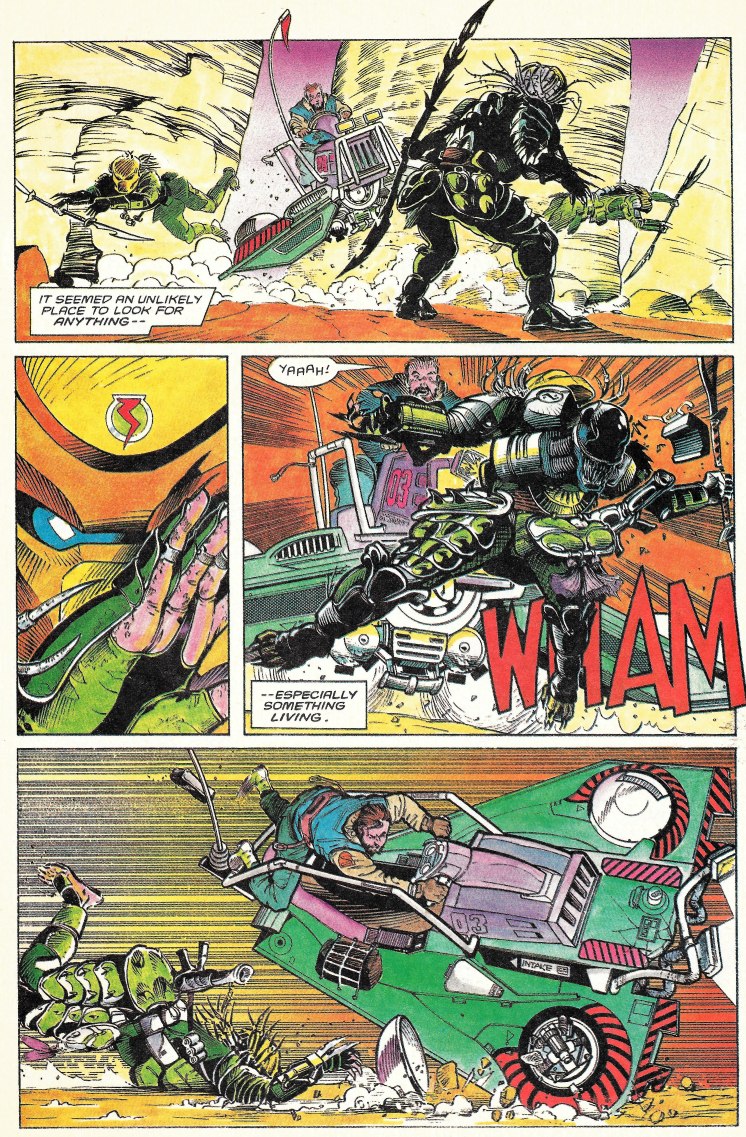 We are treated to an amazing four-page action sequence that showcases Norwood's storyboarding skills where Doc Revna tries to escape the hostile hunting party only to end up…well, see for yourself 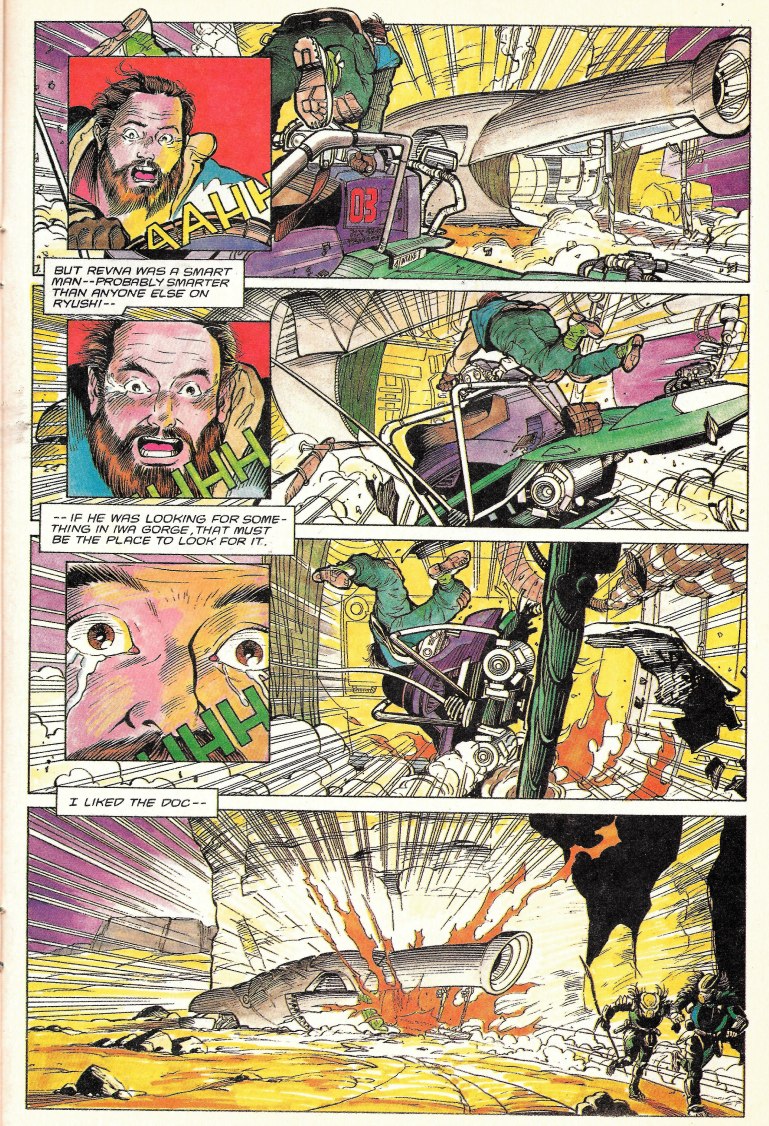 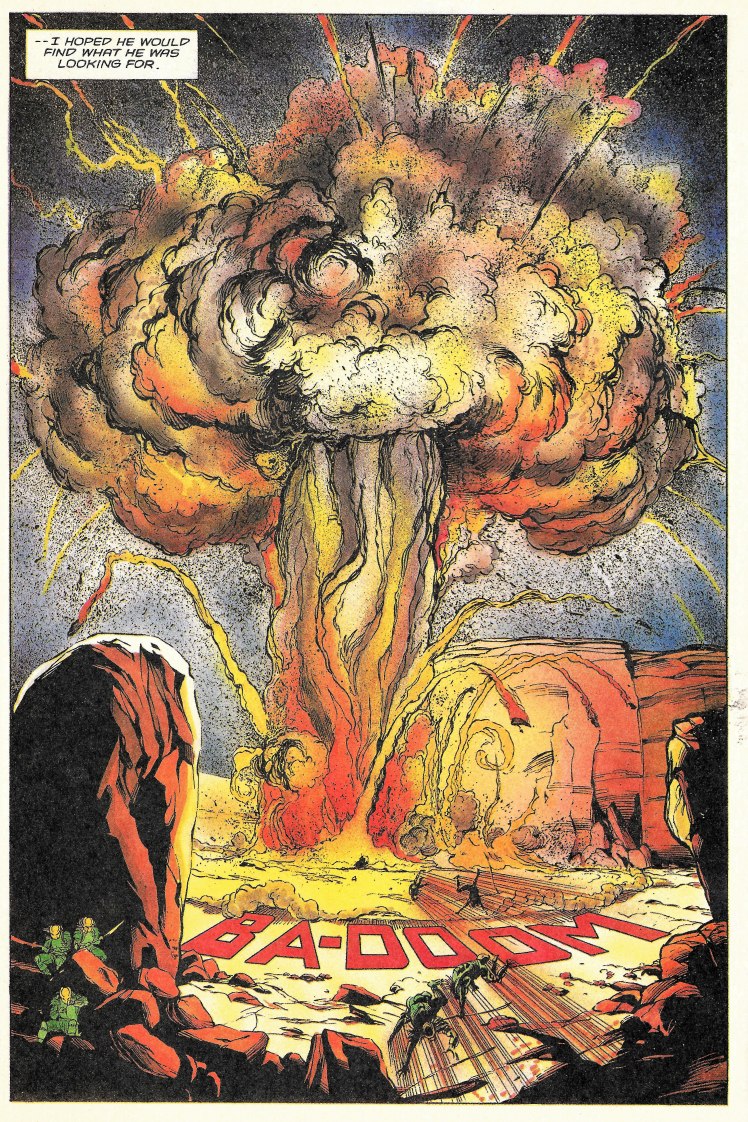 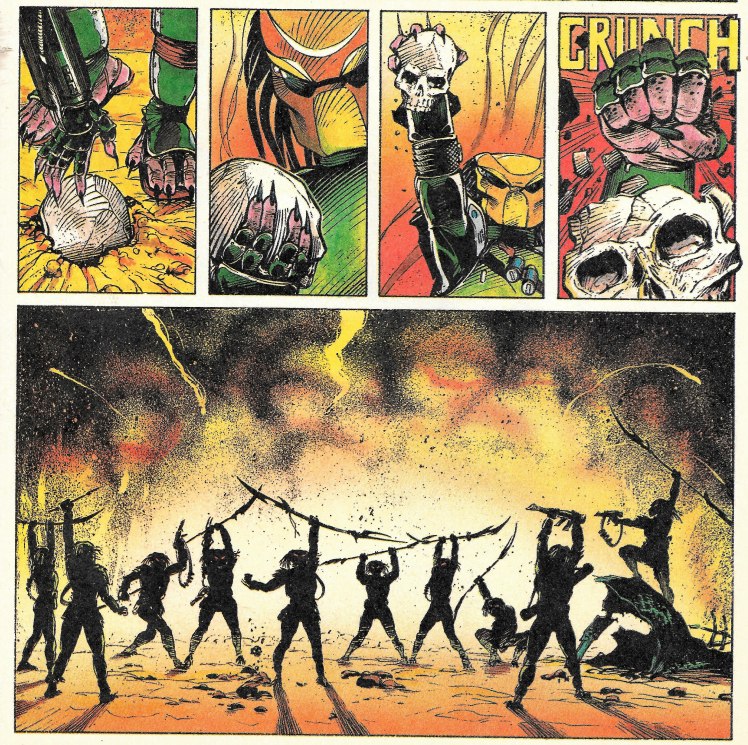 Say what you will about them, but they are pretty much the alien race with the most bad-ass attitude toward life that you will ever meet. I mean nothing gets these guys down. Blow up our ship – fine, we'll just kick all your asses. *Predators cheer* 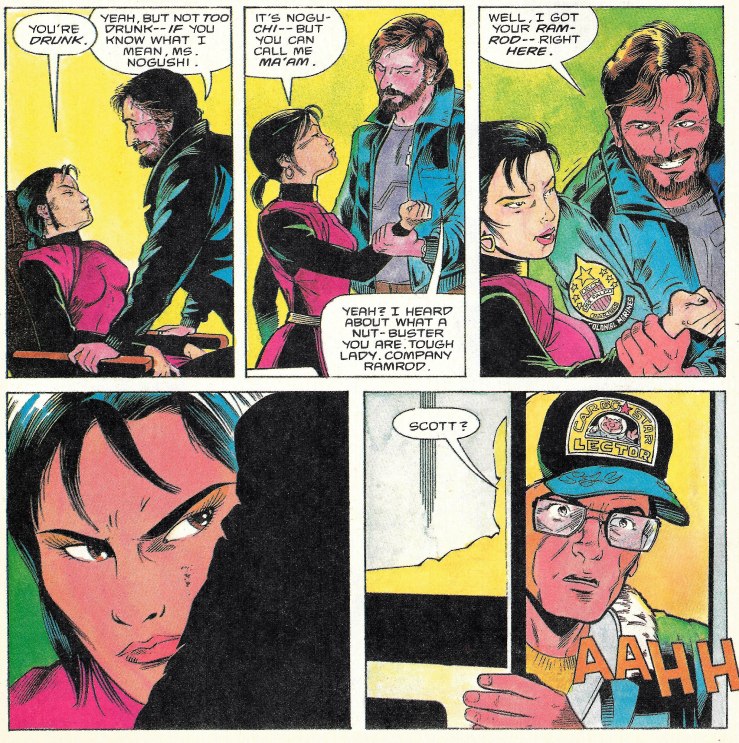 Meanwhile, Machiko fights off a very different type of "facehugger" in the form of Captain Scott "can't keep it in his pants" Stranberg. I sure hope he doesn't hurt her too much… 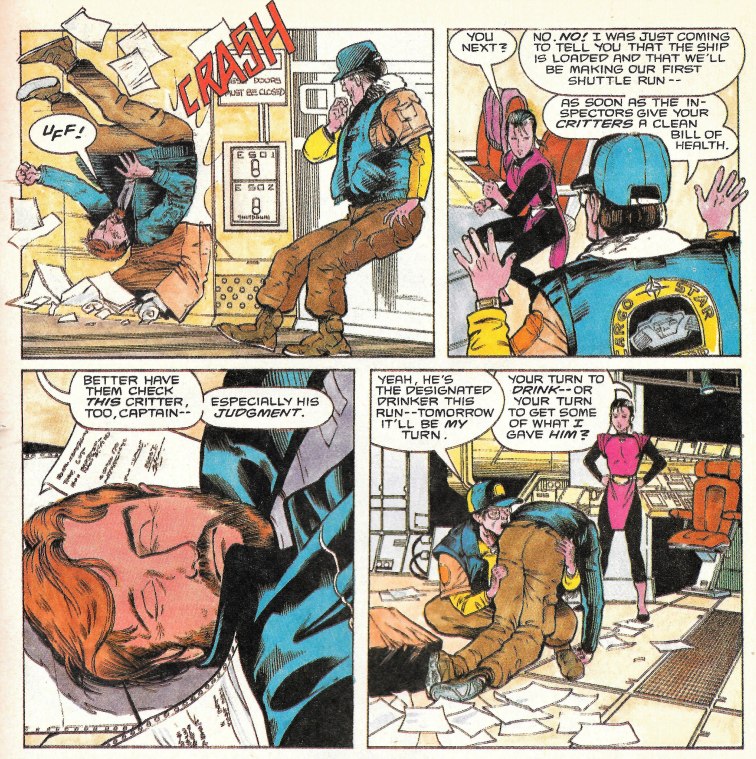 …make that "I sure hope she doesn't hurt him too much." The co-pilot quickly states he will give her wide berth. 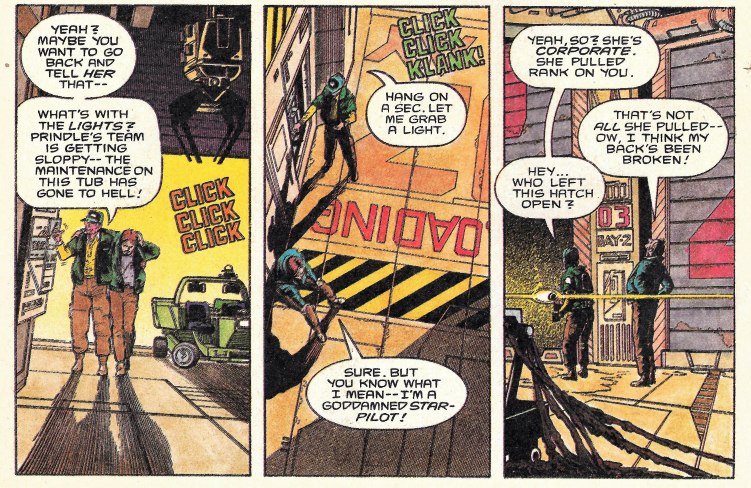 In dragging the Captain back, Stranberg comes to and starts to complain when they notice something odd about the freighter's doors. 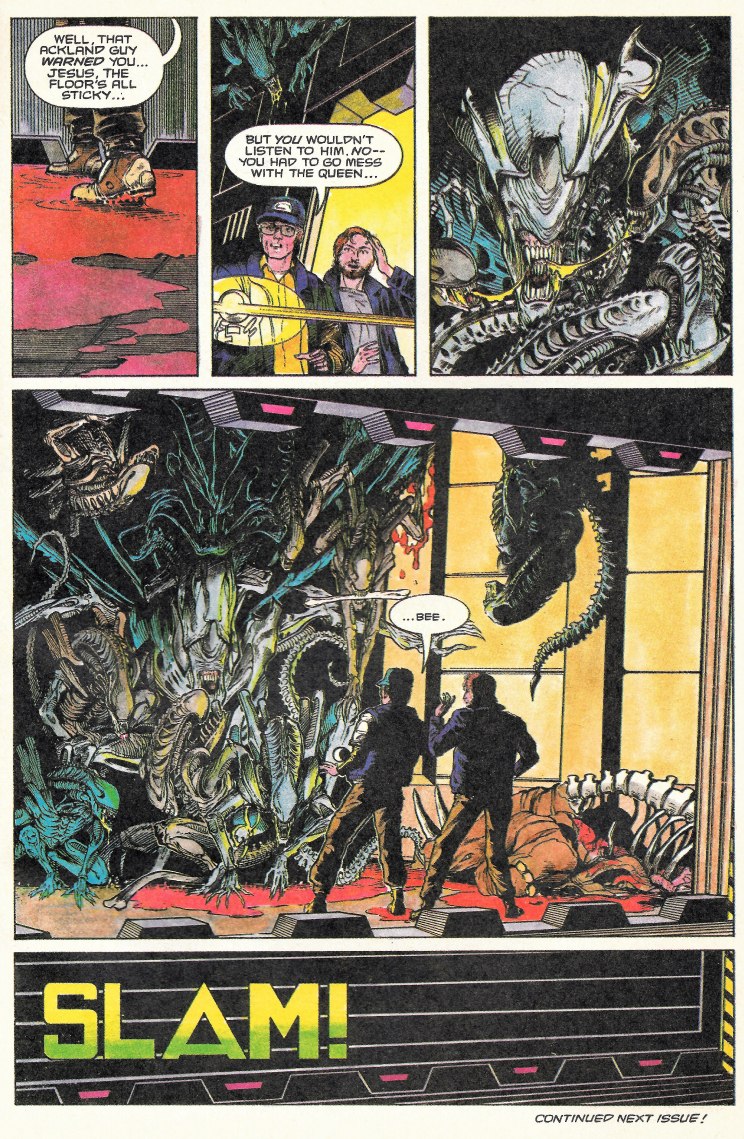 And as they wander in our issue closes with their obvious demise and the introduction of not just a limited number of Aliens for our Predator friends to hunt, but an infestation that will wipe out the colony and continue growing to consume the planet.

The Alien queen egg has hatched and she's pumping out children.

Great issue. Love the art and the story. A MUST reading for Alien or Predator fans.

Oh, and what did all this come before?

Well, the Alien vs. Predator movie obviously, with its botched premise that the Predator brings an Alien to Earth, thus negating the stakes for every Alien movie that predated it in a mess of wrestlemania disguised as a movie.

But that wasn't the movie I was referring to.

No, I meant where many of us first got wind that Aliens vs Predator would be a REAL thing, a movie we could munch popcorn to, was the spaceship scene in Predator 2. The one where Danny Glover as the sole survivor police detective finds the trophy room of the Predators which includes an Xenomorph skull (as well as what is possibly the head of a Star Wars Rancor). That single image linked the two properties so irrevocably that even the horribly received first AvP movie couldn't dash hopes of an inevitable sequel.

If only they had followed the plot of these comic books instead.

Posted by SonOfCthulhu at 3:10 AM