Horror-ible, Part XIX and Guide to Werewolves, Part "I should reopen this": Scratch #2 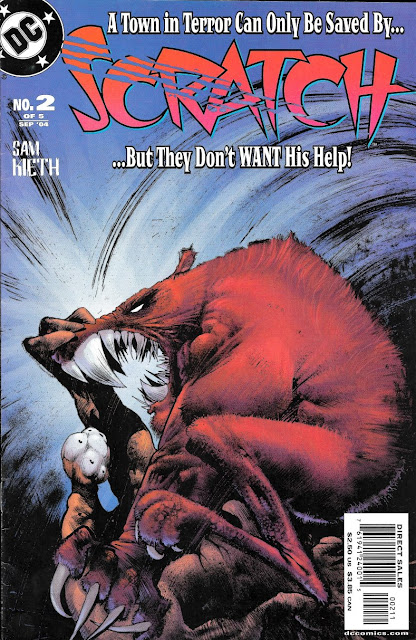 Sam Keith takes another book to the Maxx

Sam Keith is an Artist.

That's the kind with the capital "A" at the beginning of its name. What I mean by that, simply put, is that his work isn't like anyone else's. If you are like me, you primarily remember Keith as the artist who filled in the  pictures that re-introduced us to Sandman in those first few issues of Neil Gaiman's and gave us shivers from a C-list DC villain we hadn't heard from or cared about in a decade or more. Keith is also the guy who came up with the look and story around The Maxx, a short lived but much beloved MTV animated short. Never mind that it was a comic first that ran for 35 issues.

Keith has a list of credits as long as my arm, but there are a lot of artists who could make that claim. He's a writer too and a good one. Someone who comes up with involving characters and plot, stories that make you beg for more. We'll see that in just a bit.

But in my mind he will always be an Artist.

Keith has a style to his stuff that blends childlike innocence with stark explosive figures full of violent potential. I felt a bit like I was when reading Bill Sienkiewicz's New Mutants upon encountering Keith's art. There is more vibrant feeling going on in a handful of his panels than most artists put in an entire series run. I have no clue how he does it, I'm just glad he does.

It does what Art is supposed to do to you: make you feel something.

Even when that something is a silly tale set in the DC universe about a man infected with lycanthropy who turns into a goofy looking wererat-thing to protect a bunch of mutant children from other, more feral mutant children and a town of bigoted small-minded jerks. With Batman.

Well, okay THIS issue doesn't have Batman, but the first issue does, reviewed by my good friend Chris over at Chris is on Infinite Earths. I don't know how he factors into the rest of the story as The Crapbox didn’t provide more than just this one slim book.

What I do know is that we start this issue with our hero, Scratch the werewolf guy whose real name is Zach, being manhandled by this…THING that is totally a Sam Keith creation. 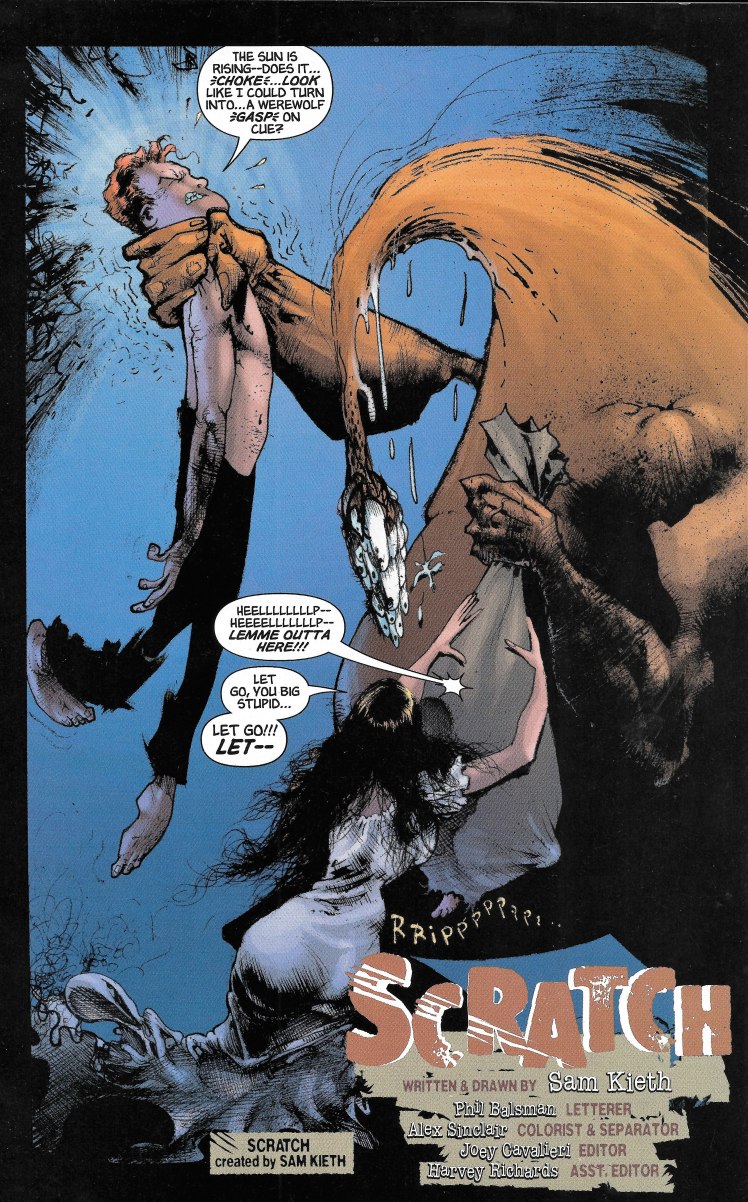 Look at that neck with all those eyes and the weird tapering body. I'm pretty sure that comic buyers unfamiliar with Keith picked this up and put it back down after one flip through. Which is sad, because while Keith's character design is a bit "out there," he gets human emotion. Also he knows how to work a panel to maximum effect.

The woman at the bottom is Sage, a kind-hearted soul who is more than she appears. She has formed an emotional bond with Zach and this book on first read through gives me the sense that they are star-crossed lovers.

Anyway the creature has snatched up some of her charges, cute little deformed children that it appears no one wants, and she's trying to get them back. And since morning just broke, Zach appears to be of very little help. He's kinda new at this werewolf stuff.

The creature somewhat understands and complies with Sage's wishes by dropping Zach. Luckily there's a rip in the bag and she gets one child out… 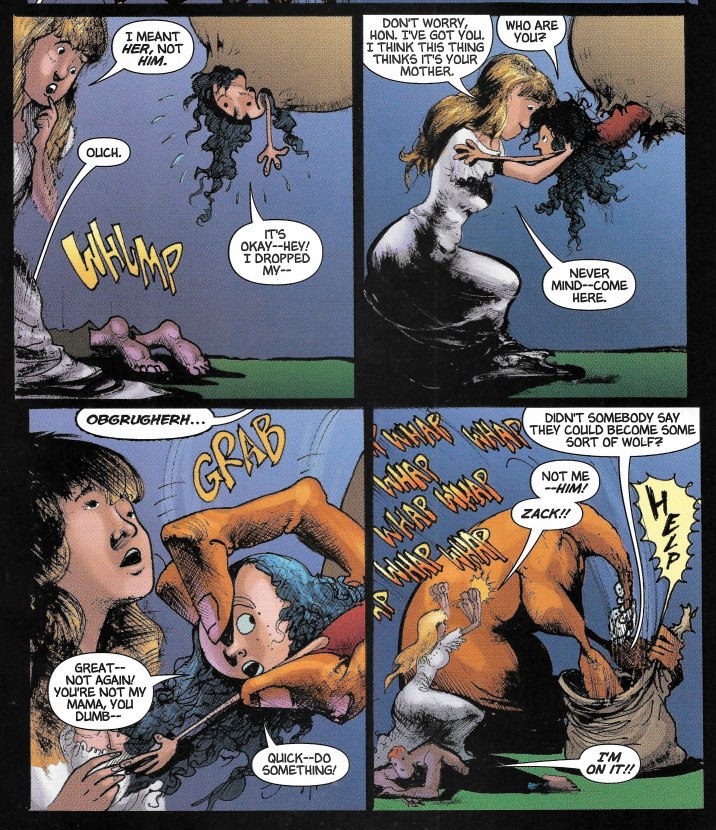 …only to have the creature put her back in. Sage is both spunky and innocent. She has a misaligned eye that I missed in these first panels but that is clearly evident later on in the book. You get the feeling she's been a victim of prejudice but the only way it has impacted her is to make her kinder to those like herself and stronger as a person.

If you find yourself not liking the art, I just have to apologize now and say move on. This art does exactly what it is intended to do emotionally. That's Keith's forte: tapping into our subconscious on an emotional level with his pictures. I LOVE the look of Scratch. It isn't standard comic book pictures, but that is what makes it so good. 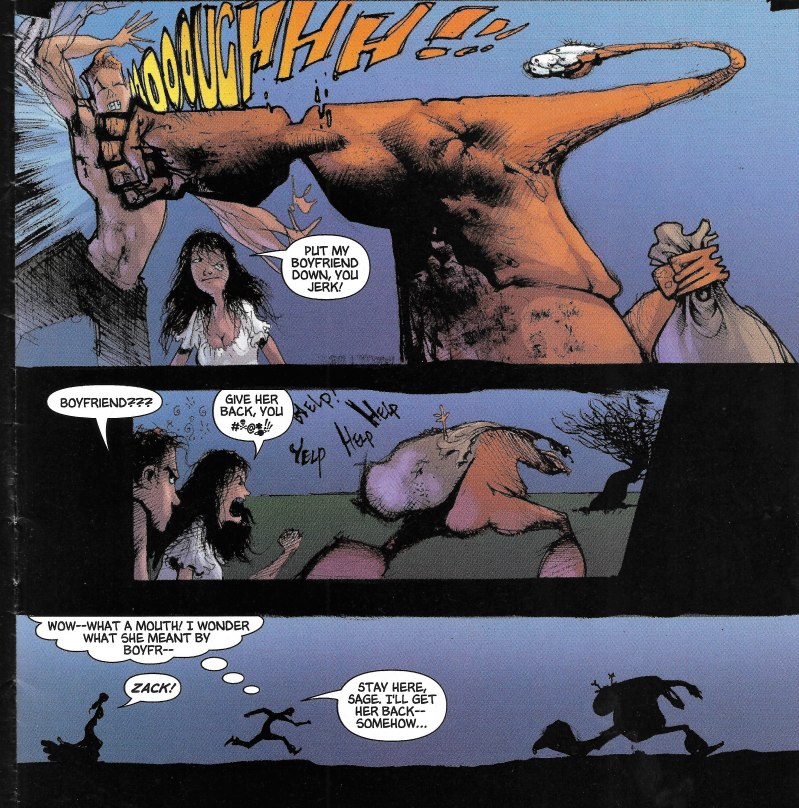 Zach doesn't fair very well and the creature gets away with the kids, but not before Sage calls this man that she just met and barely knows "her boyfriend."

Zach mulls that over while chasing the beast. Here Keith uses page layout to stun me and to make my job of scanning quite a chore. These graphics need to be experienced in full though, so here goes. 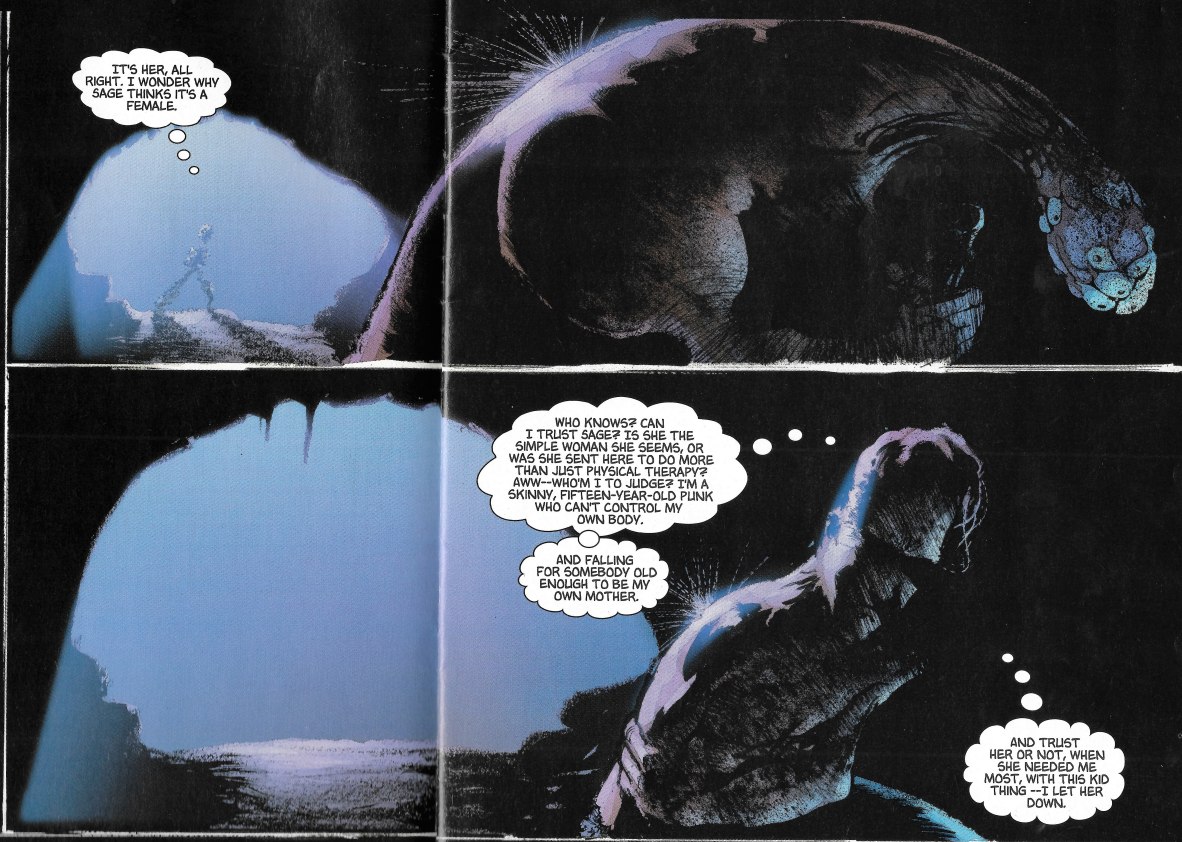 I'm sorry about the crease. And I mean that for both our sakes. Keith's art deserves to have no marring to it. Notice the juxtaposition of the creature and Zach between these two panels? How the progression shows motion even though neither is in motion? The glint of the coming sunlight as it reflects off their skin is almost like raindrops of white light. I love these little touches that pop out at you.

There are points where the art looks a bit like Richard Corbin's work and I will not complain about that.

Zach continues to chase the creature but decides he needs to revert to being a werewolf. His first attempt at doing this during the day is met with only partial success. He succeeds at getting one arm and claw transformed, but nothing else. 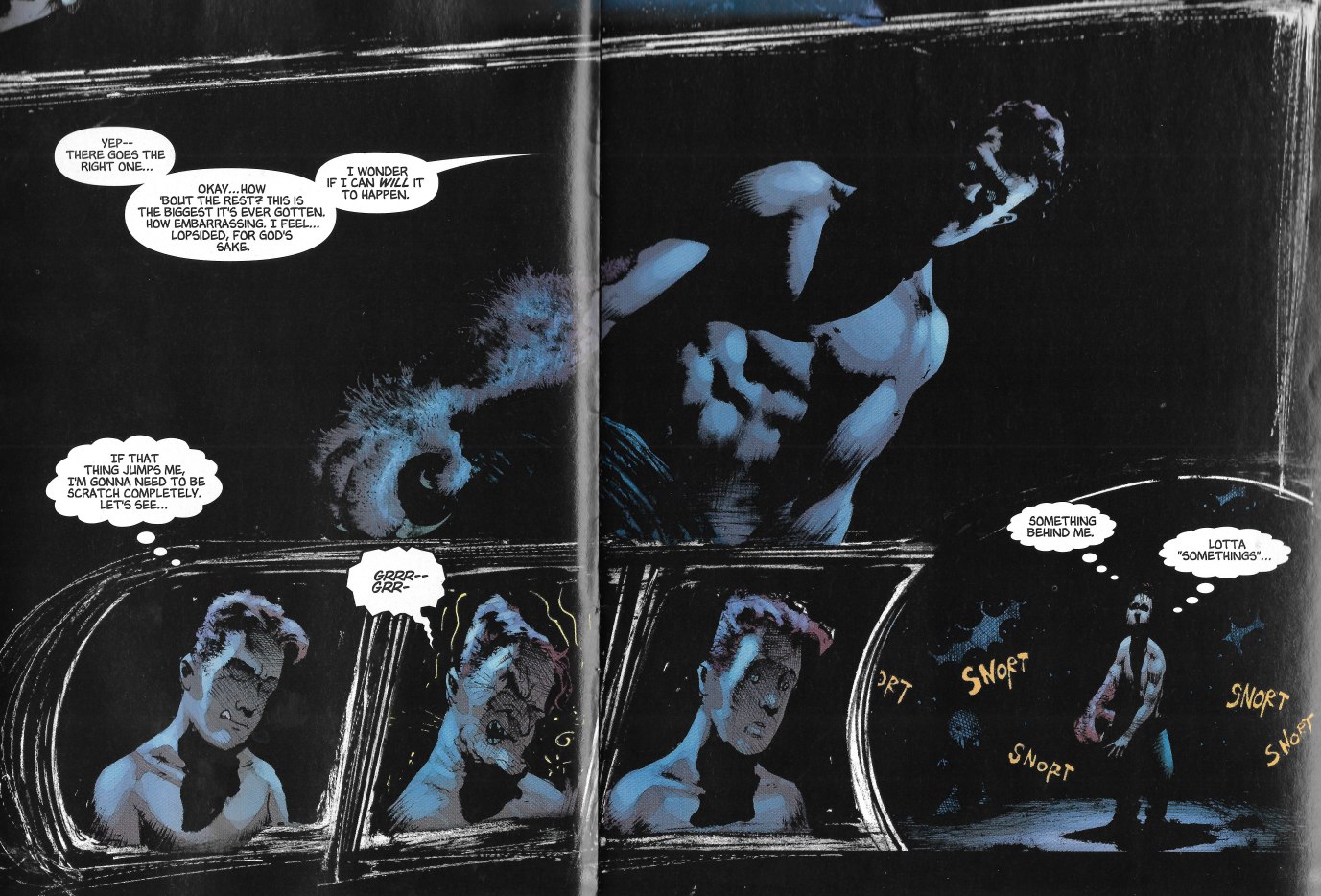 Which is sad because he is completely surrounded by feral crazed mutant children. And they are hungry. He finds this out as he ascends one stalagmite with a flat top. 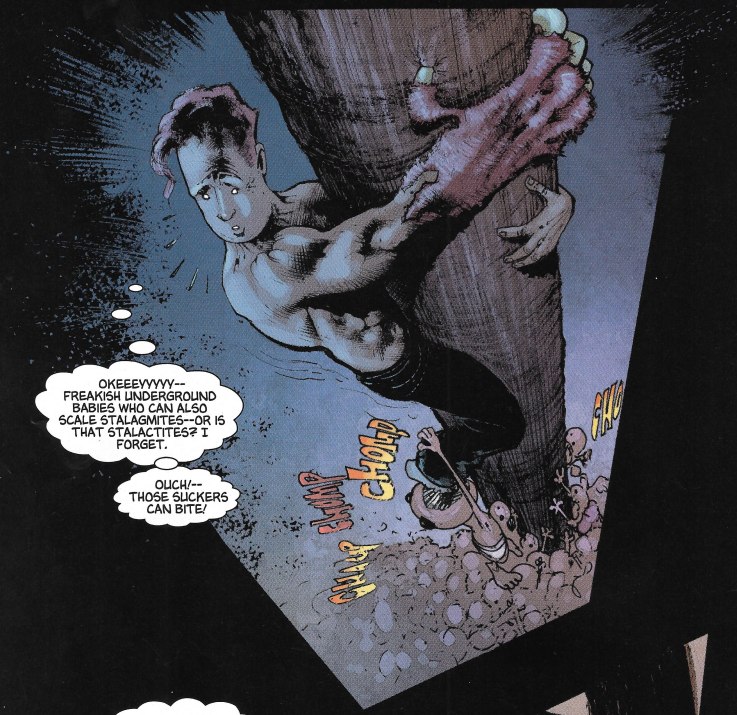 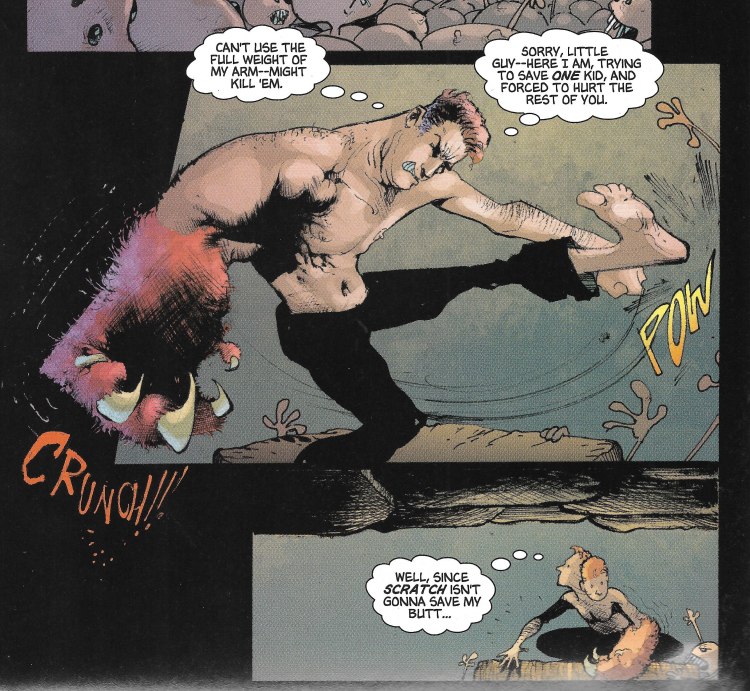 …and that the roof has a crack leading to the surface… 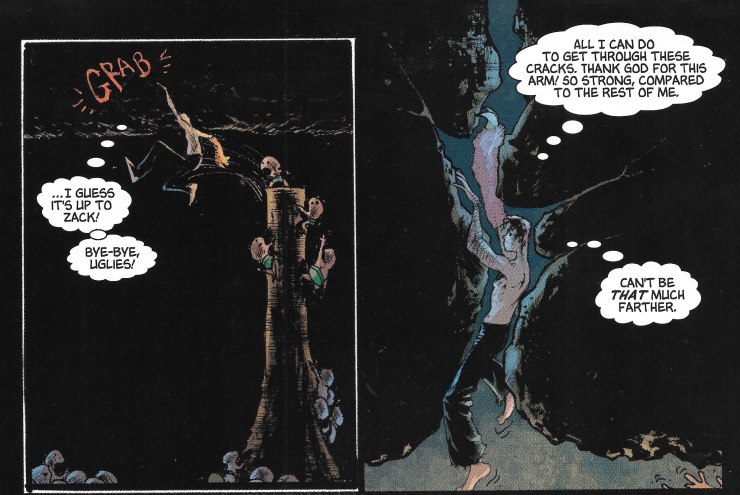 …and on the surface he is greeted by a party of townspeople out to kill all the mutants. Including him. 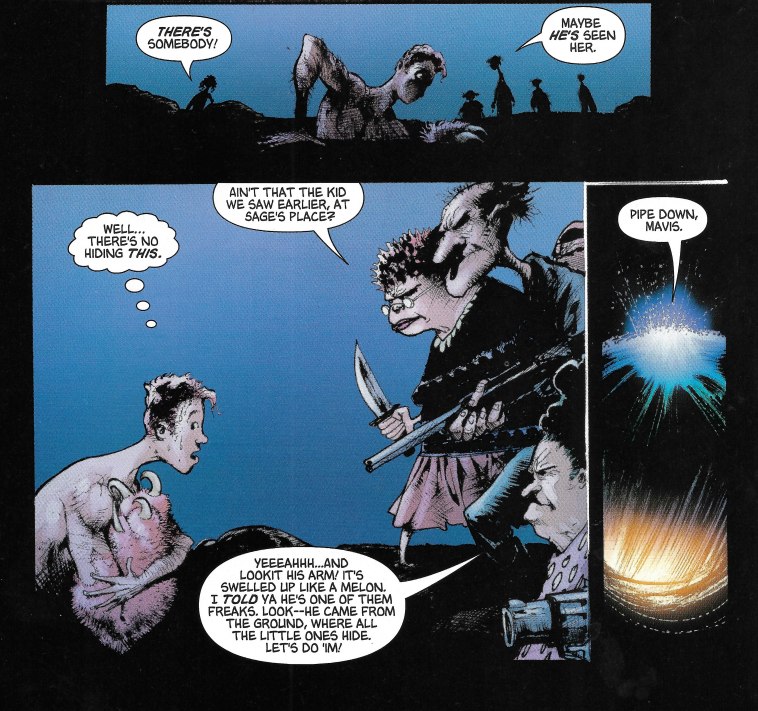 There's no reasoning with them, so he's forced to use his strength to break free. 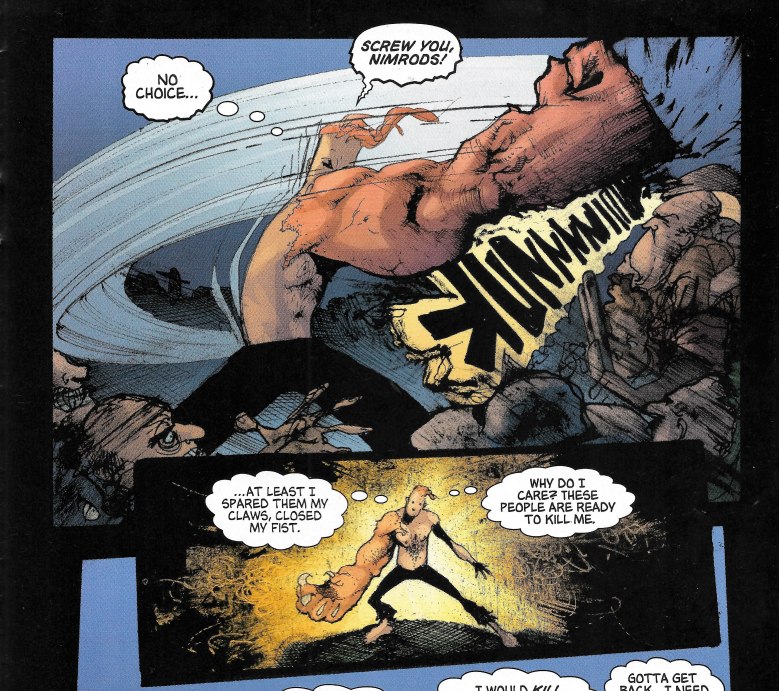 He does his best to not cause any loss of life. Then Zach hightails it out of there, hooks back up with Sage and then locks them both in her house with the unruly mob not far behind in full "torches and pitchforks" mode. 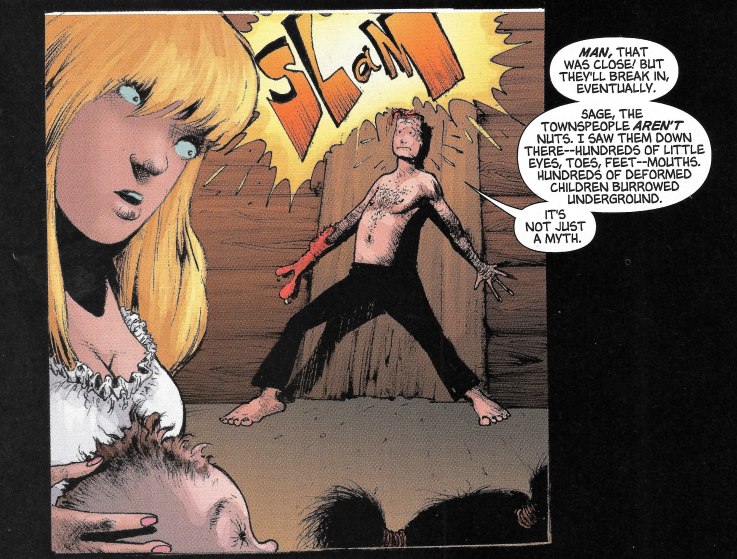 Sage then drops a bomb on him. She knows about the caverns full of mutant children. 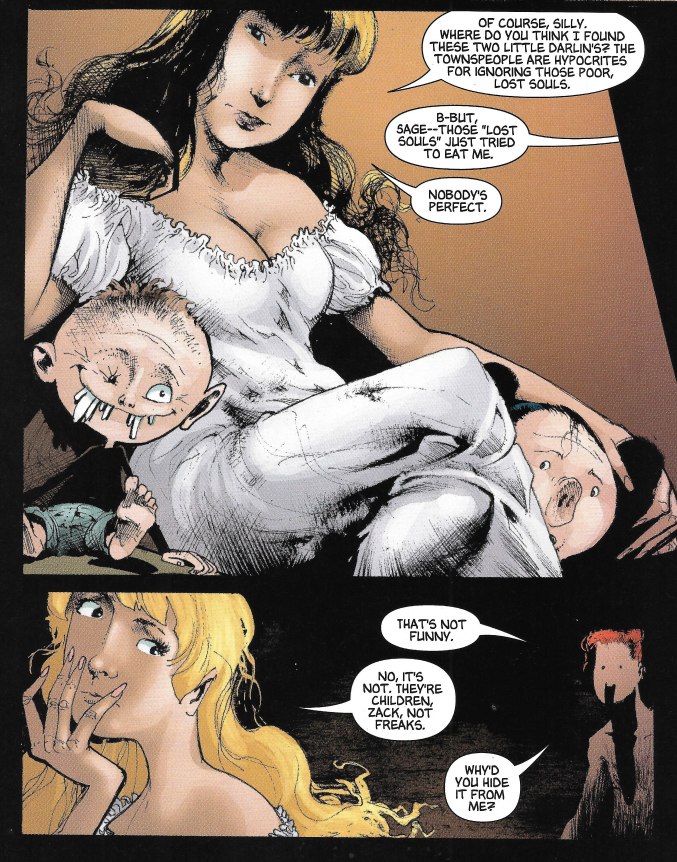 Which brings into play the moral quandary: if the children Sage is raising are intelligent kids with physical deformities, then are all the children in that cavern the same. If so, the townsfolk are about to murder a horde of disabled kids. Leaving Scratch probably the one person standing between the two groups able to do anything about it. 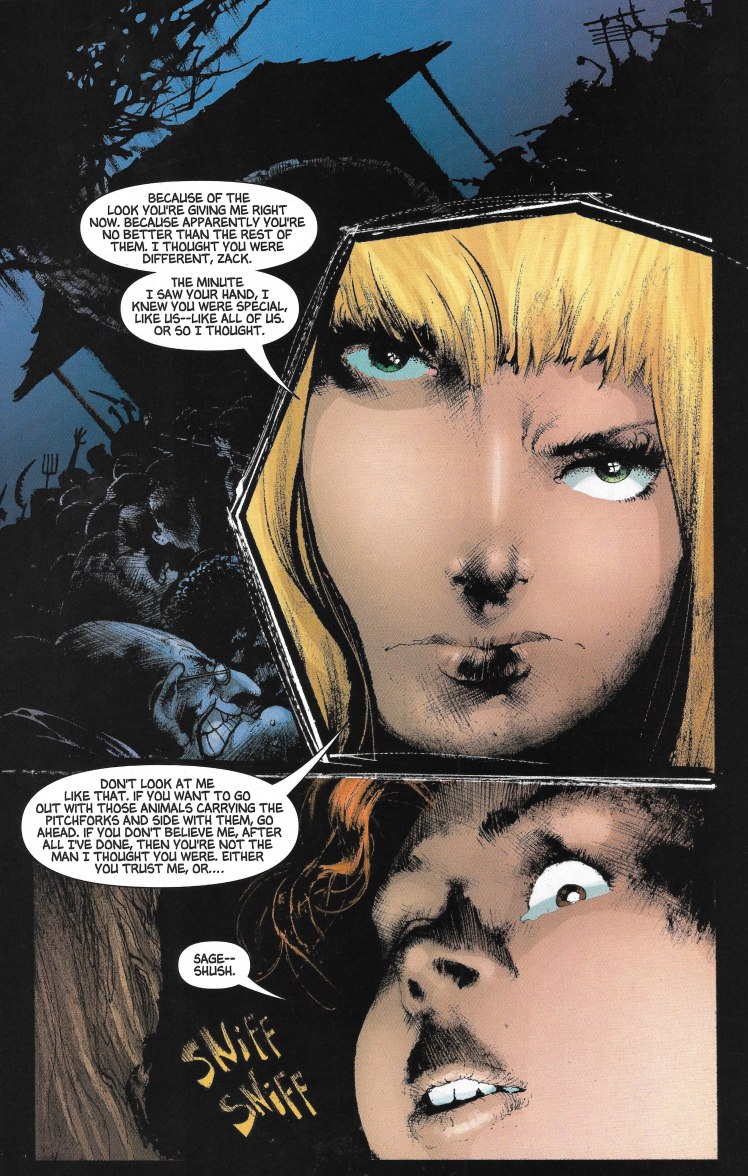 But he can't now as the villagers have set fire to Sage's house. She asks if he trusts her. 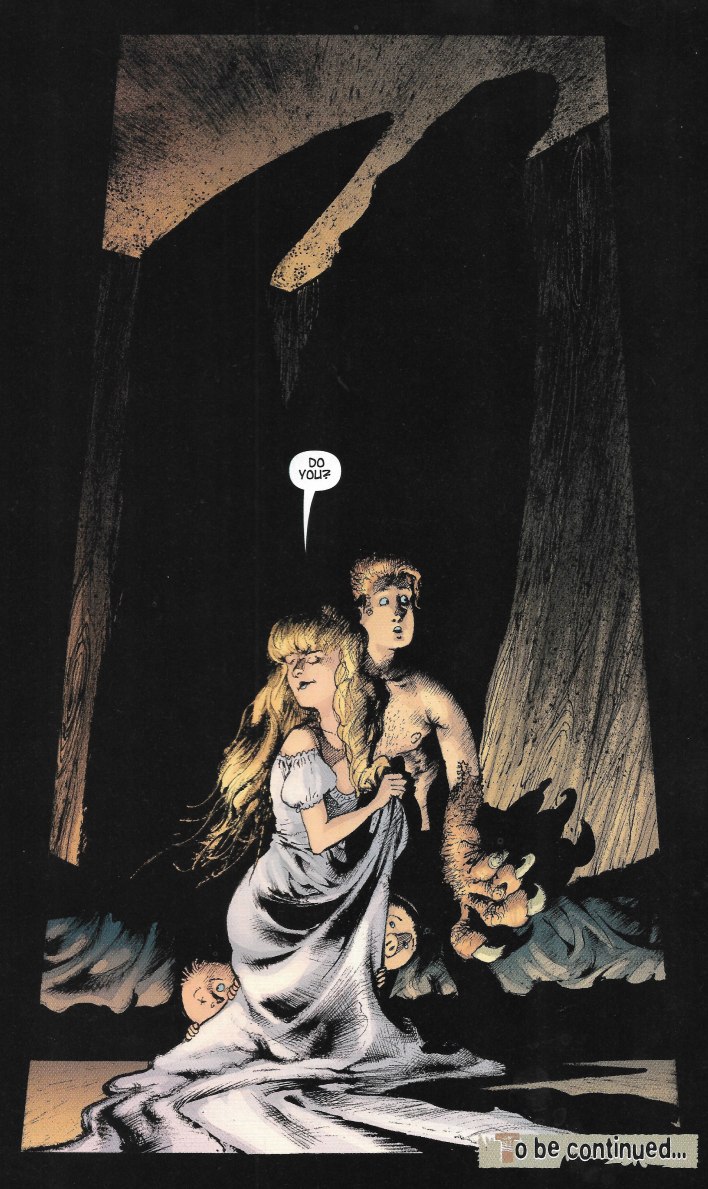 And we fade out on that cliffhanger.

Sadly Scratch wrapped up after a measly five issues. Not sure if DC audiences weren't drawn to the art, if the pacing of the story was too slow, or if Keith had told all of this story he wanted to tell. It does seem like there wouldn't be much more to do in this corner of the DCU once peace was somehow brokered. I do think that Keith's artwork in this is outstanding. And for me, sometimes smaller is better.
Posted by SonOfCthulhu at 6:37 AM

Email ThisBlogThis!Share to TwitterShare to FacebookShare to Pinterest
Labels: Guide to Werewolves, Horror-ible