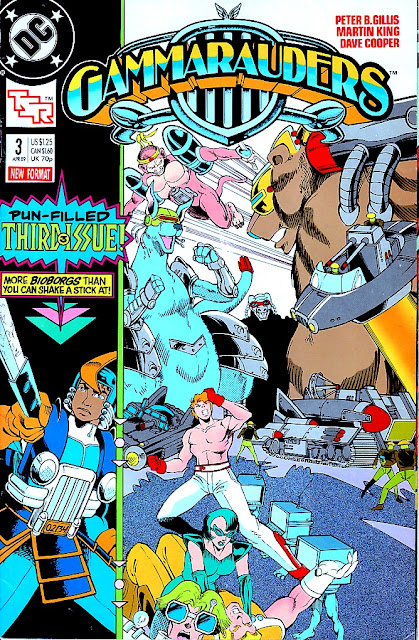 Essentially the same story as Pokemon only stupider

TSR Inc, the house that brought you Dungeons & Dragons, slipped this game into its marketing mix in 1987. Not an update of their Gamma World RPG or in any way connected to it, Gammarauders was a stand-alone strategy board game. The object of the game was to destroy all your opponents fortresses or a certain number of them, depending on the number of players. 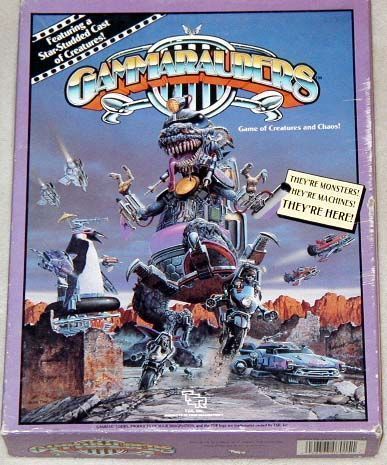 BoardGameGeek weighs in on it HERE and RPG net does the same HERE. 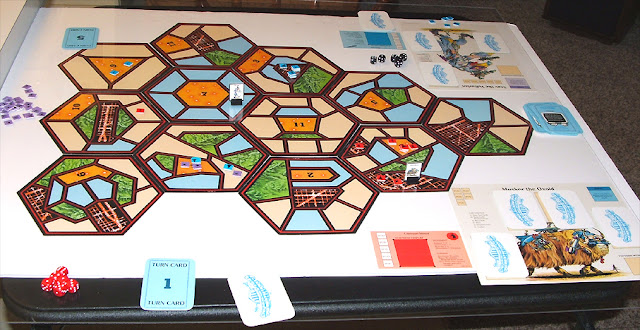 The game consisted of 12 hexagonal terrain tiles that could be arranged in almost limitless combinations to create the game board, 108 weapon, reinforcement and special cards, 6 Fortress cards (up to six people can play), 4 six-sided dice, a rule book, 200 tokens representing soldiers, tanks, jets and energy pods, and 6 Bioborg layout sheets printed back and front. Bioborgs are giant mutant animals that have been outfitted with various weapons. The original set came with stats for a turtle, two different rodents, a couple of dinosaurs, a bear, a kangaroo, two different apes, a musk ox, a vulture and a penguin. 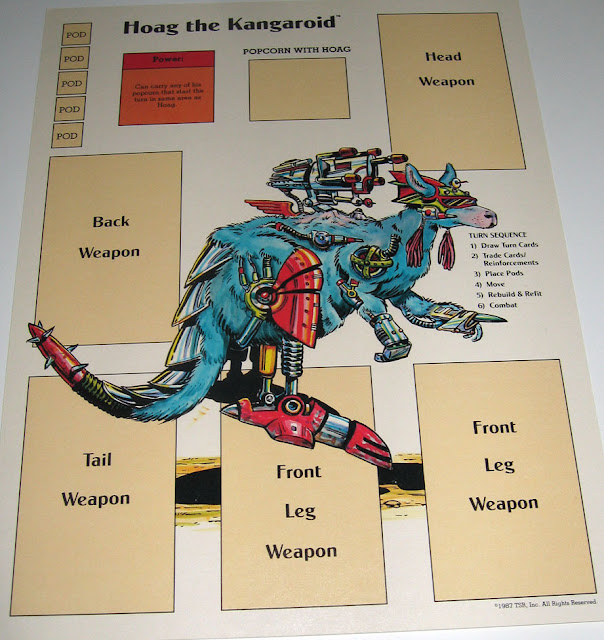 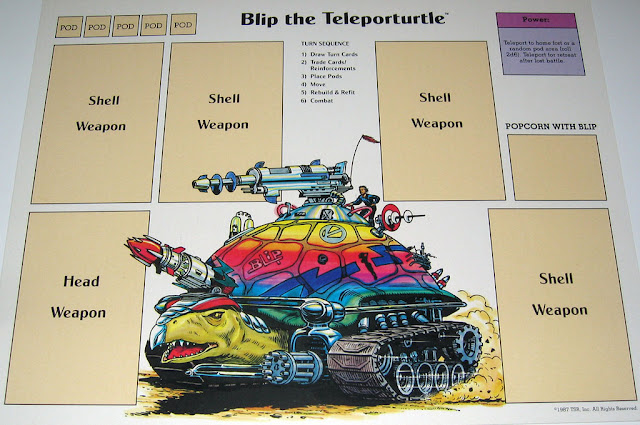 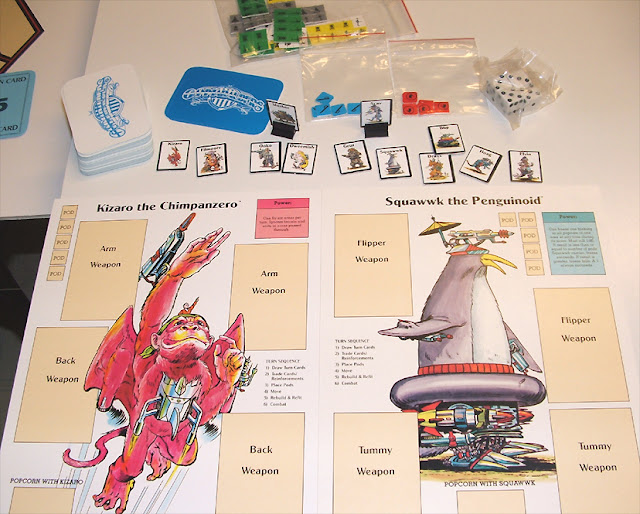 I never played Gammarauders personally. I was highly anticipating it to be an extension or expansion of TSR’s Gamma World RPG. Both games were set in the future, contained mutants and had a couple of starting syllables in common. I think the disappointment I felt with it being a strategy game was what kept many loyal TSR customers away from it. 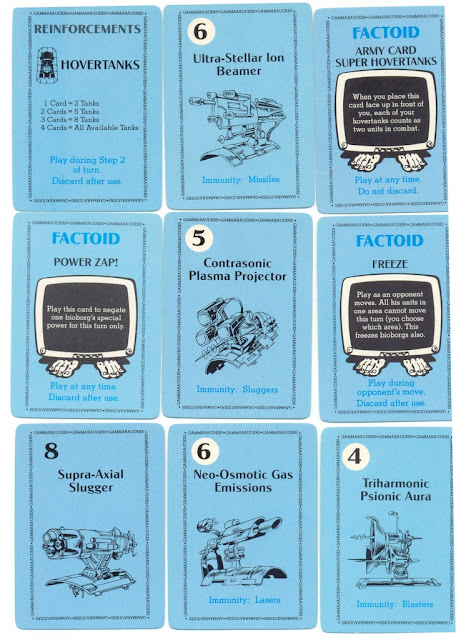 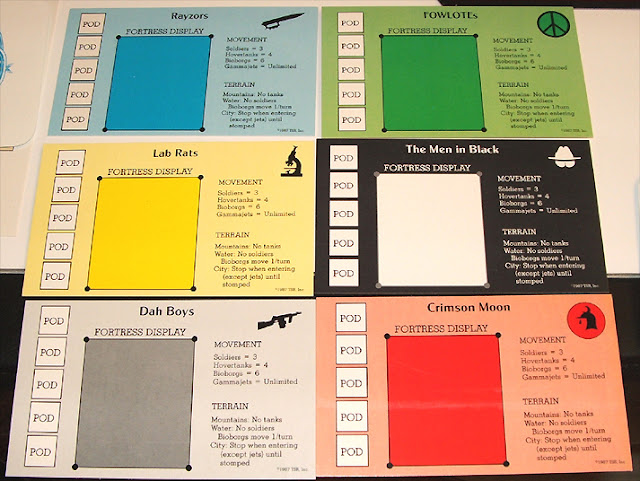 Even though it was set in a post-Apocalyptic world, the game’s theme was tongue-in-cheek. Hard to imagine anyone taking a giant weapon laden penguin too seriously. 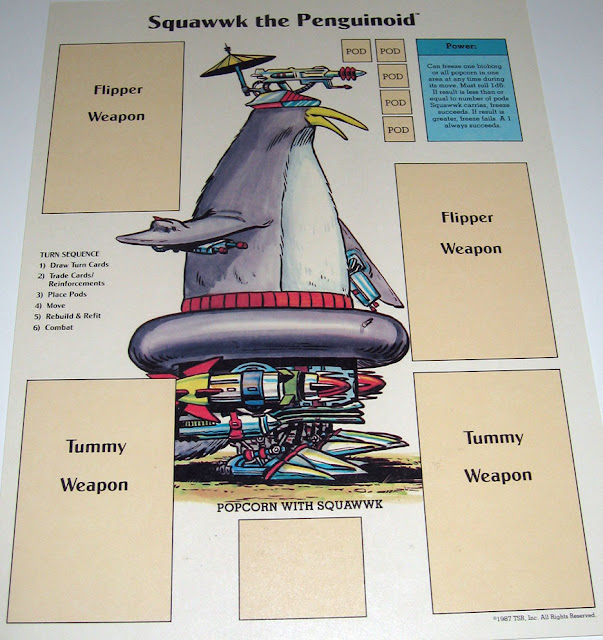 People who have played the game stated that it was fast and a lot of fun. An expansion pack was released shortly after the games introduction, but it wasn’t enough to pull Gammarauders sales up. The game sank into obscurity.

DC comics begain publishing comics based on TSR’s Advanced Dungeon & Dragons, Forgotten Realms and Dragonlance games in 1988 and Gammarauders seemed like another good horse to add to the stable. Maybe horse is the wrong term; mutant Kangaroid might be a more accurate assessment. Whatever the term, poor sales lead to a quick exit for the title, but not quick enough for it to evade a trip to the crapbox.

Gammarauders takes place on Earth sometime in the near future. Full scale nuclear war has rendered most of the planet uninhabitable wastes. The environment does provide one benefit: naturally occurring energy pods dot the planet’s surface. Properly harvested, they have multiple uses.

Two post apocalyptic inventions make the Gammarauder’s Earth different from Mad Max’s. Factoids are TV sets on two legs that literally run wild across the planet’s surface, gathering knowledge. Millions of these things were accidentally produced and they spend time spouting gibberish and passing information to one another.

Professor Womba’s Bioborgs are the second discovery, a development that costs the professor his life. Womba is killed by the evil Slugnoids for the technology and the race to conquer Gamma Earth begins. On one side are the evil Slugnoids who want to rule everyone, on the other are the Gammarauders who want to return the Earth to its former state, and in the middle are the Cryptic Alliance. The Cryptic Alliance is made up of six factions (the six factions from the game) and are courted by both Slugnoids and Gammarauders.

Our comic begins with Bioborg handler Tadsworth waking up after a battle. Tadsworth and Hoag were fighting another Cryptic Alliance faction called the Rayzors who had sided with the Slugnoids. He’s coaxed back to consciousness by Jimbo, a fellow handler. 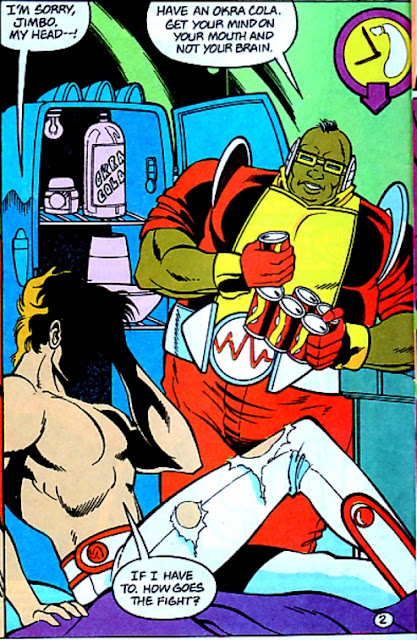 Orka Cola? The day they start making soft drinks out of vegetables is the day I eat a bullet. If this is the future, I’m glade I die in a fiery nuclear holocaust. Jimbo tries to prod Tadsworth’s memory of the battle back, which ends up being a bad idea because Tadsworth’s sole thought becomes concern over Hoag, his Kangaroid. That single-mindedness is sure to get him into trouble. 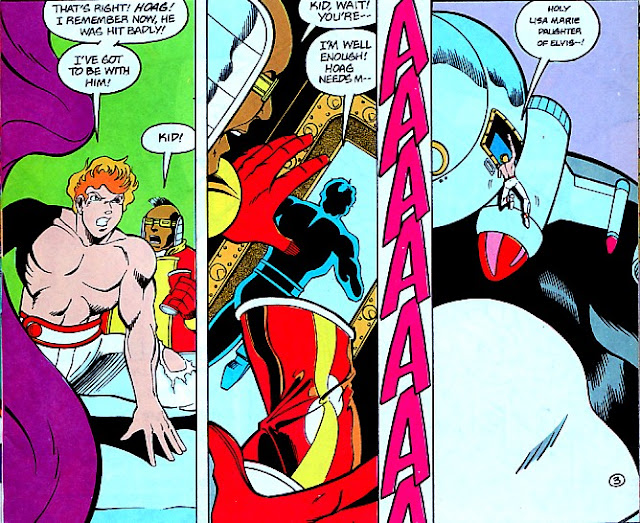 I love it that they take “The King’s” name in vain in that last panel. Seems Tadsworth didn’t realize he wasn’t on the ground floor. But what the heck is he on? 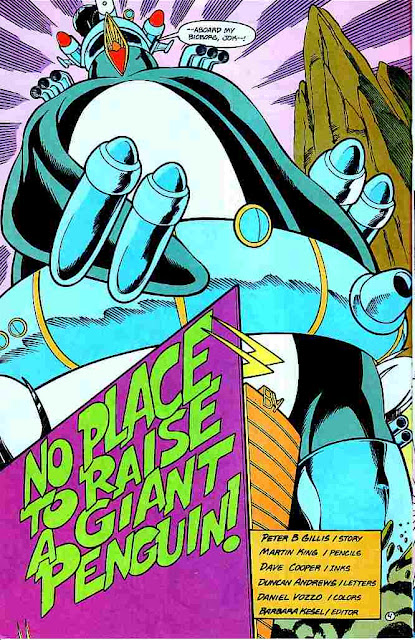 Oh, a giant penguin. I should have guessed. The art style in Gammarauders has a silly, cartoony feel to it. Without the bright, bold “four-color” pallet they use, much of the art would look almost manga style. I’m not really a fan of it, but I do have to give DC props for finding a look that fits the tone of the material.

And speaking of that material, some Rayzor boys have been tracking Jimbo and Tadsworth. They show up now on their flying motorcycles, forcing Jimbo to activate his giant penguin. Yeah, that’s a line I never thought I’d ever type. 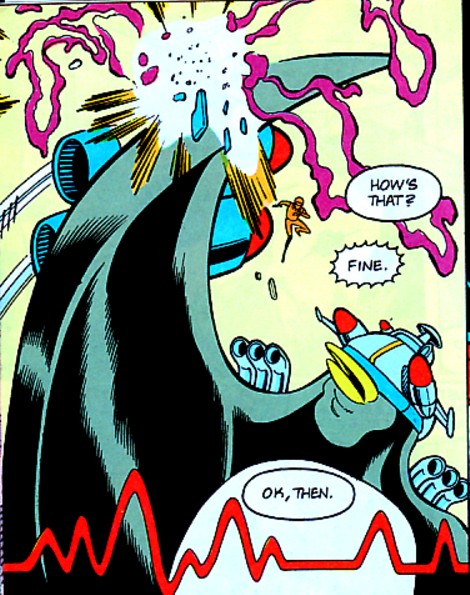 I might need to mention that any kind of attack craft (soldiers, jets, tanks) in Gammarauders are called “popcorn” due to the ease with which a Bioborg can destroy them. So Squawwk dispatches them with a flick of a fin. This leaves our heroes to travel on to the regrouping of factions aligning themselves with the Gammaruders. 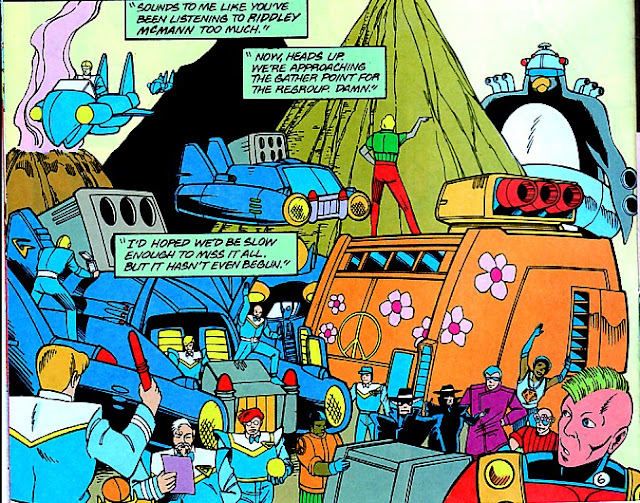 From this picture you can pick out members of The Men In Black, Lab Rats (scientists), Crimson Moon (samurai types), and Friends of Whatever Is Left Of The Earth (hippies) factions. The only faction unaccounted for is Da Mob, which we latter learn is pledging support, but hasn’t shown up yet. Since we’ve already seen the Rayzor faction, all of the groups from the game are accounted for.

The Peguiniod is sent to the pen with the other Bioborgs, who are about the only things worth the price of admission in this book. 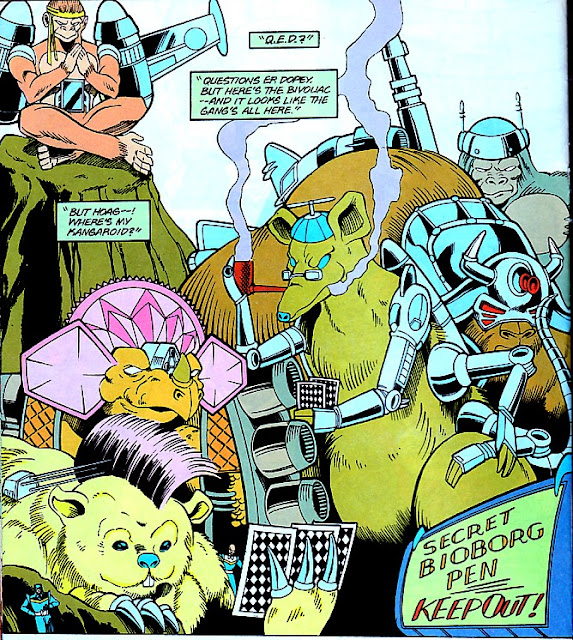 They make for a rather goofy looking ensemble. I’m especially tickled by the meditating monkey and the pipe smoking rodent. Hope they fight better than they look here, which, now that I think about it, is pretty much assured. No way they could look worse in battle, right? I’m wrong about this, by the way. Also if you put up a big sign saying "Bioborg Pen," there really is no purpose in putting the word “secret” in front of it. Just some more tongue-in-cheekyness from the writers. Moving on, Tadsworth is reunited with his injured/damaged Kangaroid Hoag, in a scene that needs some drippy, overly sentimental music.

I expected to see French kissing in the next panel, this was so overplayed. I guess bonding with a Bioborg is a bit like falling in love. Awwww. Like falling in love with several tons of smelly giant mutant war machine. Sort of like how Dick Cheney’s wife must feel. Tadsworth gathers with his fellow handlers to get the lowdown on their tactical situation from Admiral Haynes. 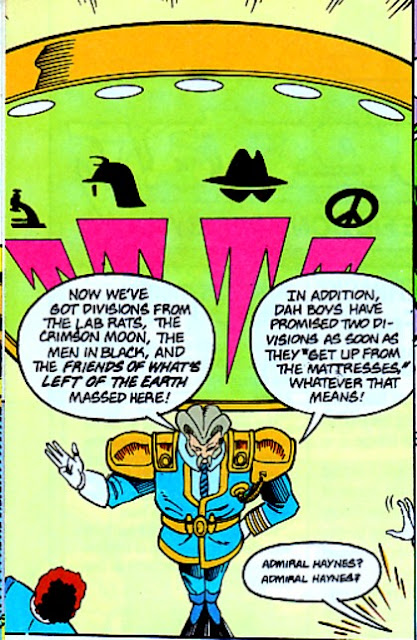 Admiral Haynes looks like he stole his hairstyle from the Beatle’s Sergeant Pepper’s Lonely Hearts Club Band album. He’s also got bad news for the Bioborg handlers: they are to take position at the rear of the attack column to be held in reserve. While the Admiral does have a lot of “popcorn” out front, it makes no tactical sense to keep the seven best fighting units (which the Bioborgs are) out of a fight that contains multiple enemy fighting units (other Bioborgs) of equal strength. Basically the Admiral is going to turn all his popcorn into cannon fodder for zero gain. A smarter move would be to use the Bioborgs as a thrust with his units in support…you know, screw it. I’m buying a copy of the game. Meanwhile Tadsworth is trying to get the lowdown on what the Admiral’s forces will be facing. 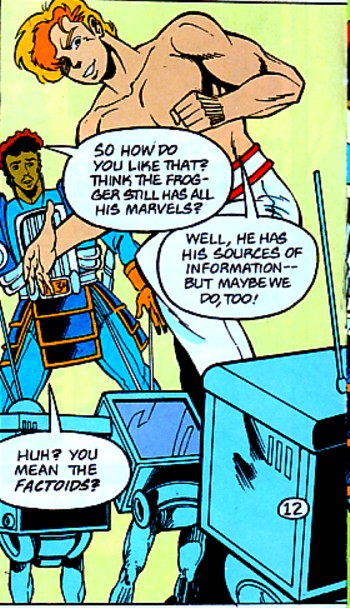 Talking with a Factoid is not the recommended way of doing it however. They do carry a bunch of information but they tend to convey it in cryptic ways. Take the first part of this very direct exchange. 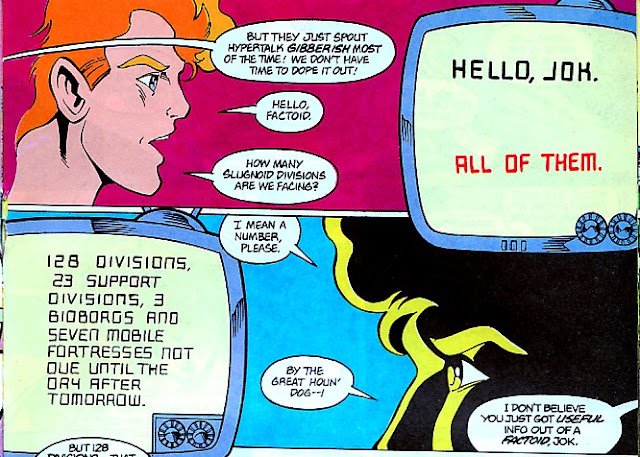 That “All of them” line is pretty good. It answers the question without actually telling them anything new. That second part is just a pure “one in a million” lucky shot because Factoid speak gibberish more often than Paw from the Hillbilly Bears. To prove it they are back to it in the bottom panels of the same page. There’s no time to ponder what they say, however as Admiral Hayes forces get their butt resoundly kicked by the Slugnoids and Razor factions, leading with three goofy Bioborgs. 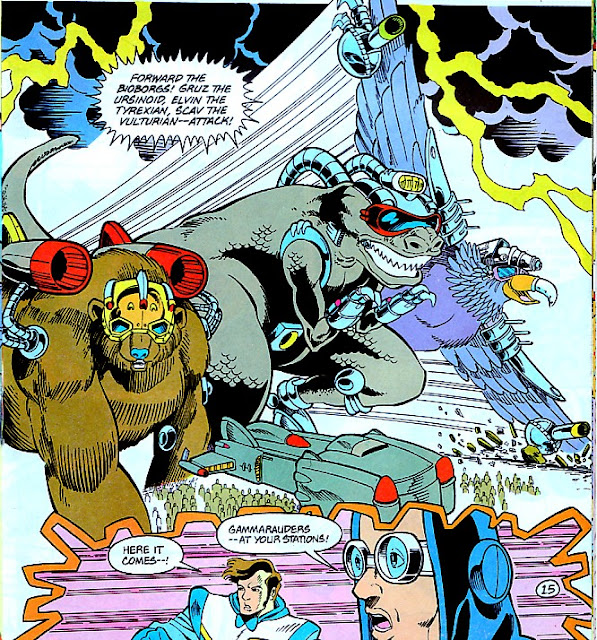 Cyborg Vultures and Dinos and Bears, Oh MY! These three Bioborgs proceed to trash all the Gammarauders troops (as I predicted, and I’ve never even played the game –yesh!), but the Tadsworth and the other six “good-guy” handlers decide to ignore the Admirals orders and enter the melee. 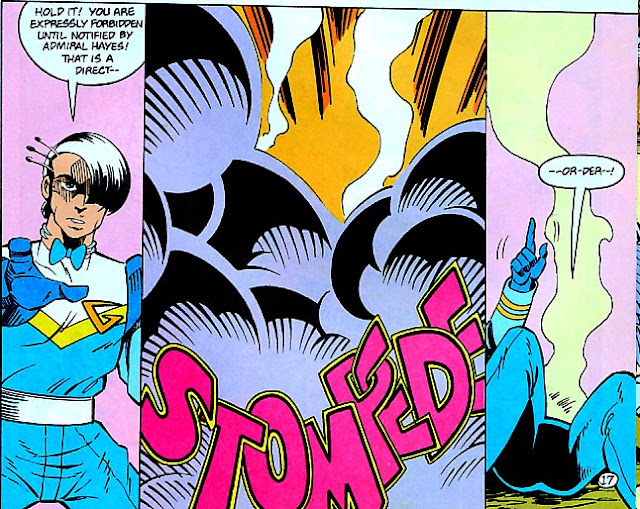 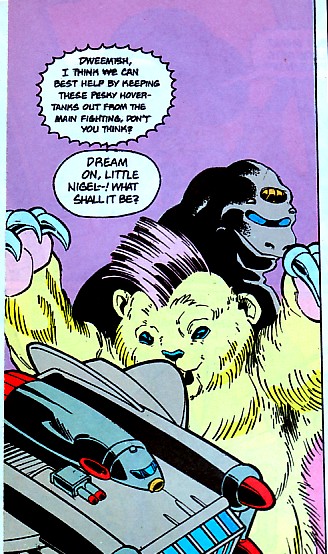 The giant fight scenes don’t thrill me as much as they should. Perhaps it’s the fact that all these skirmishes take place in a wasteland instead of around a “Godzilla” quality fake cityscape. Giant monster battles need some convenient buildings to topple or else you just don’t get the feeling of scale that you should. I did like this series of panels as the T-Rex gets a bit of what’s coming to him. 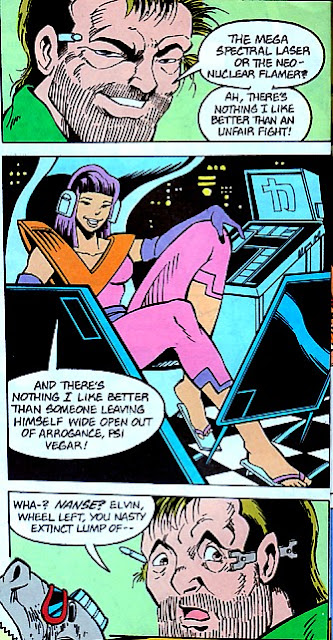 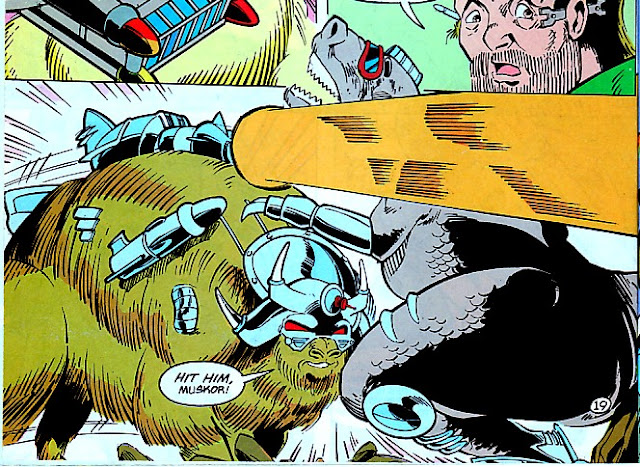 The rest of the battle is not done as well. It’s some random scenes of the characters that add neither to them nor the ongoing action. Then we get a big plot twist. Da Boys show up to lend a helping hand to the Gammarauders, looking like Al Capone with rockets glued to his suit coat’s shoulders.

He proceeds to double cross them to the Slugnoids. Who would have thought a faction based on mobsters wouldn’t be trust worthy? Nice “Budda-budda-budda” sound effects. I haven’t heard that one used since those first few issues of Punisher. All of this fighting leads to an overuse of the phrase “Good night, Gracie” which is so dated that even comic readers in 1987 didn’t know where it came from. All of this culminates in the bad guys unleashing their most awesome weapon yet:

Armpit-mounted laser beam cannons. Which knock out all the good guys and their Bioborgs. I can only assume that they keel over from the awful smell of the armpit lasers. The issue ends with everyone, including Tadsworth, slipping into unconsciousness.

Gammarauders the comic book lasted 10 issues and I’m wondering how many of these began and ended with Tadsworth comatose? At the end of the 10th issue, DC ran some backup features that told how the tale was suppose to end, meaning sales on the title must have really stunk for them to pull it before the arc was completed. We can count this as “strike one” for TSR’s properties-to-comics. It will be a long time before they hit one out of the park. For me (and maybe most of us) the quirkiness of Gammarauders was either too much or too little. Comedy is very hard and comedy in a burned-out radioactive wasteland inhabited by political factions that war using giant moles, dinosaurs and penguins is even harder. I’m seriously looking into that game, though. Might be a blast.
Posted by SonOfCthulhu at 6:16 PM