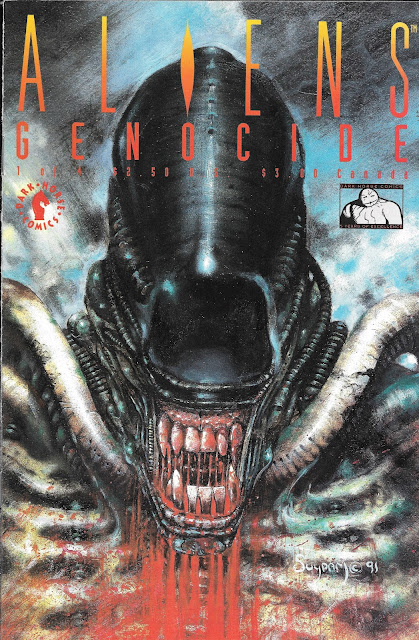 Dark Horse got bitten in the first three Aliens books it published.

Specifically because they chose to use characters from the movie as the basis for their story, the publisher ran into continuity issues when the movies…did something different with those same characters. (Spoiler: namely kill them all off.)

Aliens: Books one, two and three all had to be rewritten to remove Newt, Hicks and Ripley and any mention of LV-426. The action in the subsequent publications occurred to different people who had encountered Aliens in exactly the same way on another world and were aided by a synthetic android Ellen Ripley.

Sheesh what a headache that must have been.

Learning from that experience, this book marks a departure from the movie characters for Dark Horse. Completely.

I think that was a good step too. It got Dark Horse's writers and editors thinking in new directions. This particular issue is setup for the Alien action in the three that follows, but all that is okay with me because the concept they present is so very intriguing.

And I'm not certain we would have gotten this if it hadn't been for the fact that Dark Horse was burned believing the studio would NEVER remake a happy ending into a tragic one. So, silver linings and all that here we go.

We begin with lots of Alien stuff as setup for where we are going. This takes place on the Alien homeworld, where if I don't miss my guess, a prior issue of the Aliens series had the humans abducting an Alien queen but leaving her hive mostly intact. 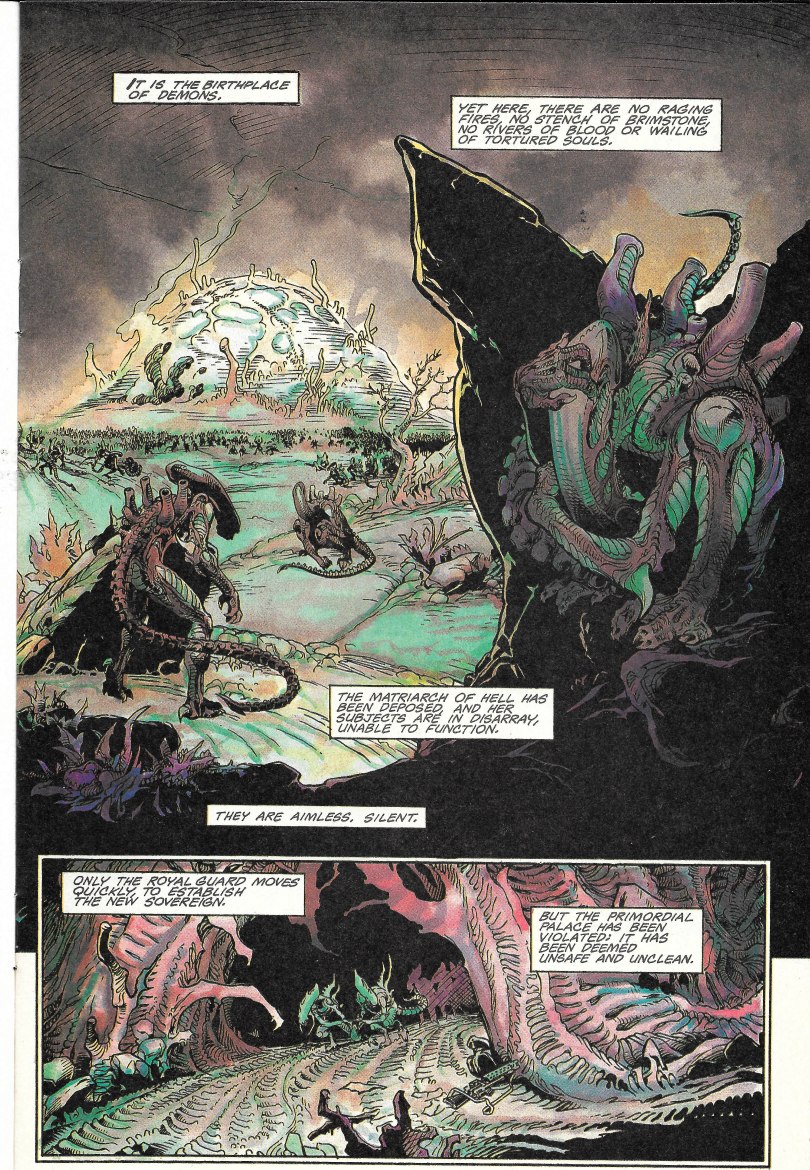 The loss of the queen means the hive colony on her home planet is in disarray. All save her royal guard drones, who leave the hive to establish a new one. 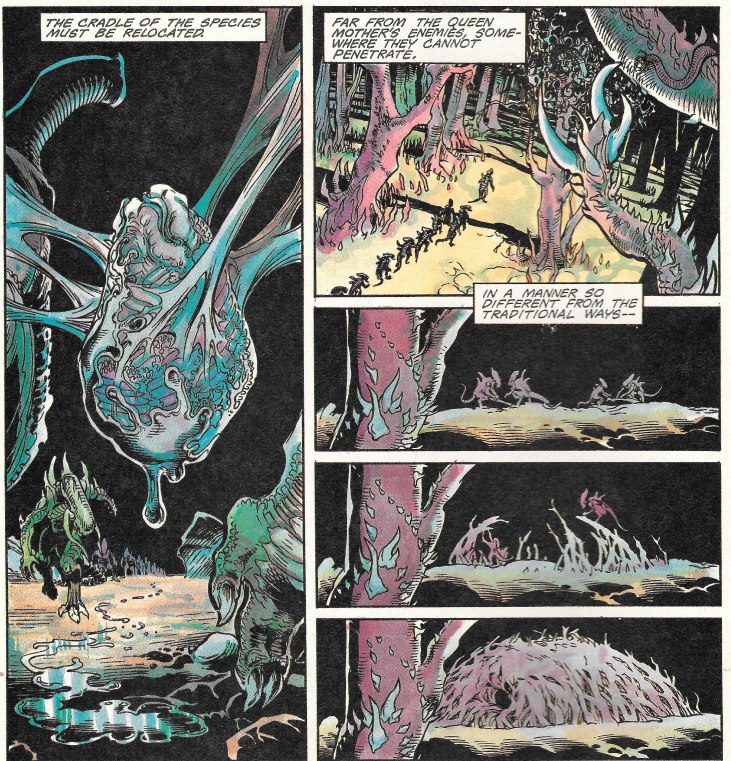 They carry a seed of a new queen with them and once they "setup shop" as it were, a slightly altered Alien queen emerges. Her difference showing most visibly in her coloration. (Listen to me go on. I sound like Steve Irwin. I'm like the Xenomorph Hunter. Next thing you know I'm going to rush in and try to wrestle an Alien drone. Not bloody likely!)

Now we've got your traditional "black" Aliens living alongside our non-traditional "red" Aliens. 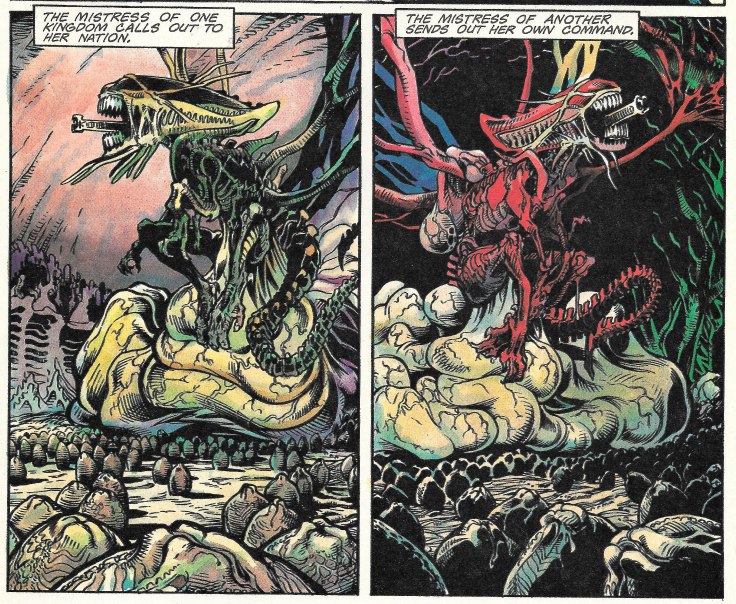 As any biologist will tell you, when you have two predatory species living in a confined environment that subsists off the same dwindling food supply what you end up with is… 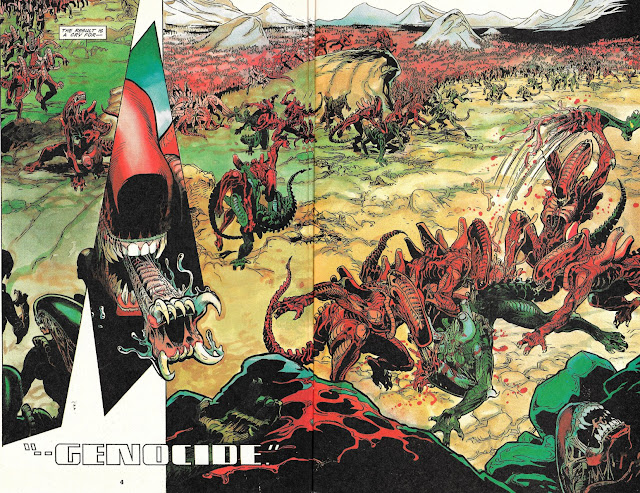 And be glad of these five pages, because we are Alienless for the rest of this issue. At least in any measurable way.

Instead we retire to the peacefulness of Earth, now cleared of the Aliens that infested it during the first three book series. In the absence of the Aliens, the book takes a renewed interest in the human's leisure activities. Specifically this sprint race during the goodwill games. 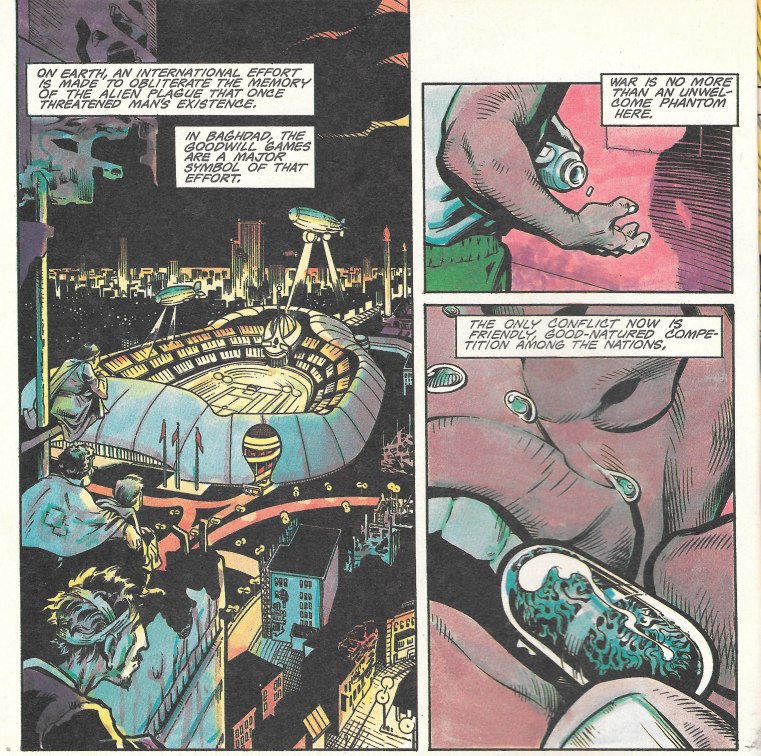 One of the racers appears to be doping, with a decidedly wicked looking set of vitamin pills.

The race starts and he is off like a shot. Literally. 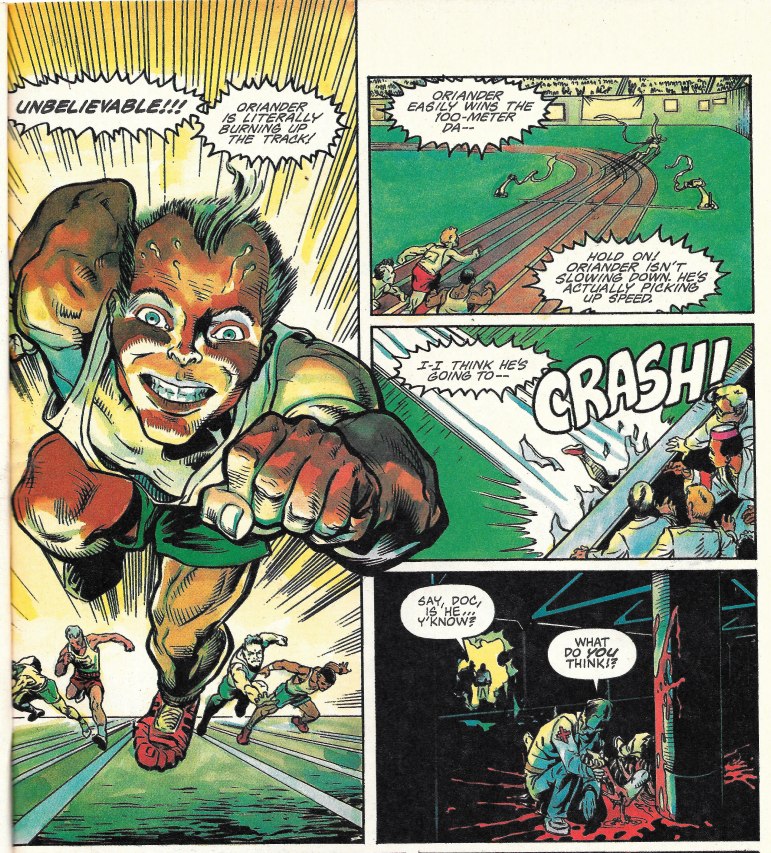 Because just like a shot, he doesn't stop running until he smashes through the wall below the stands and impacts with lethal effect onto one of the support columns.

What would cause this?

Xeno-Zip supplements, a product of Alien and synthetic elements that appear to be the drug of choice for performance enhancement. How is it that this can be legal or that anyone would ever take something so dangerous? The answer in just a few. 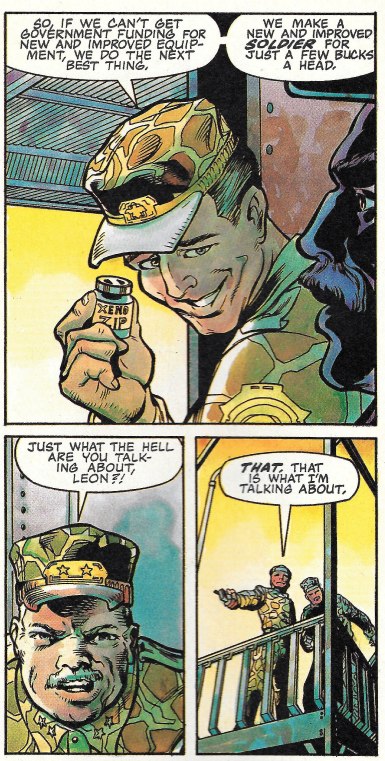 We know what he's going to be pointing to: a poor dogface downing a Xeno-Zip…

…and we are right on the money. Behind him come the brute squad in full beat-down mode. 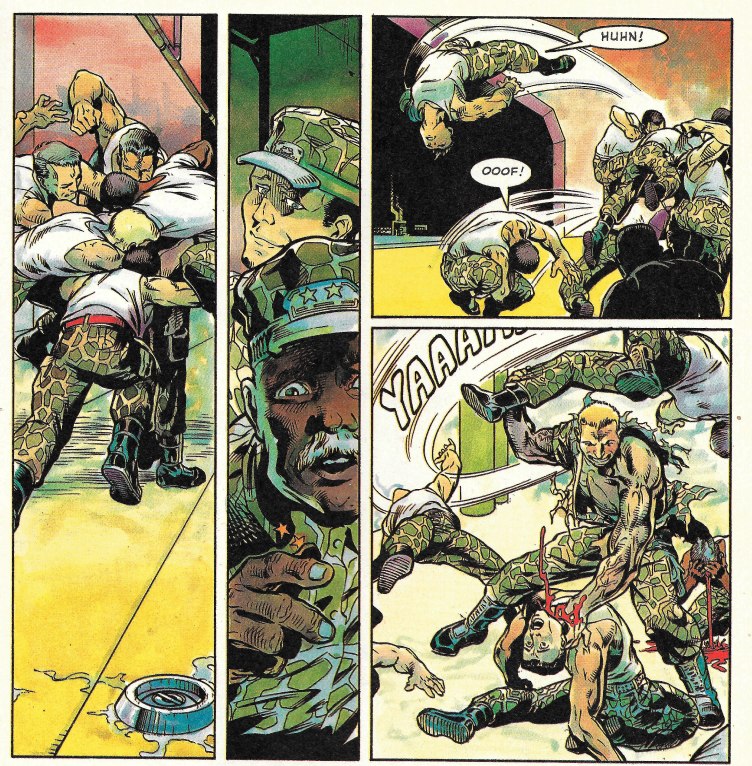 Our marine isn't having any of it though, tossing guys around like rag dolls and literally tearing out their throats….

…as well as their hearts. Note he doesn't just pull it out, but is actually showing it to the guy.

That last Xeno-Zip guy that we saw only stopped what he was doing when he ran smack dab into a post. I hope there's a post on this military base. (Get it?…a post IS a military base.) 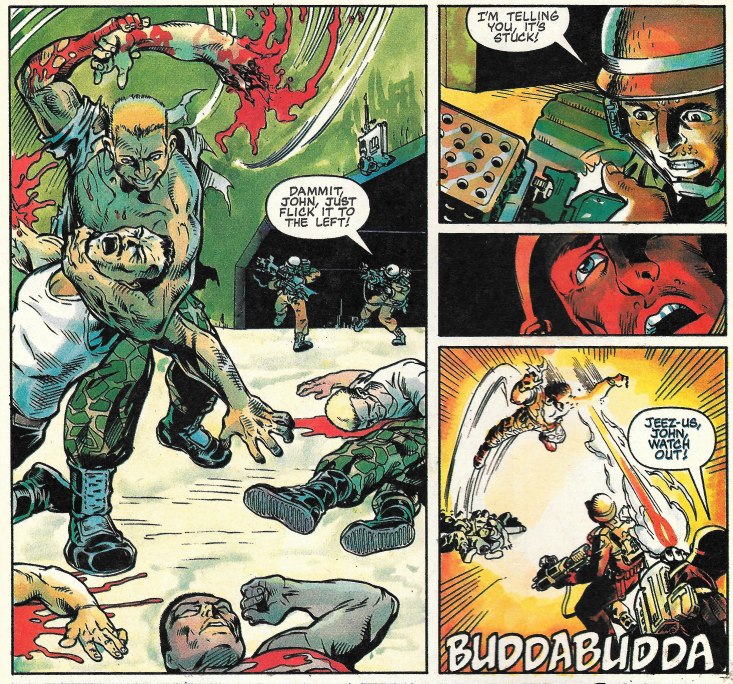 Sadly that doesn't appear so and the Xeno-Zipped solider has now taken to ripping off people's arms and beating them to death. Yeah, I'm kinda smiling at that since it is like every over-the-top death in the book of cliched deaths.

He takes out these two guys with guns and now we have an ARMED, crazed super killer on our hands. No one is safe. 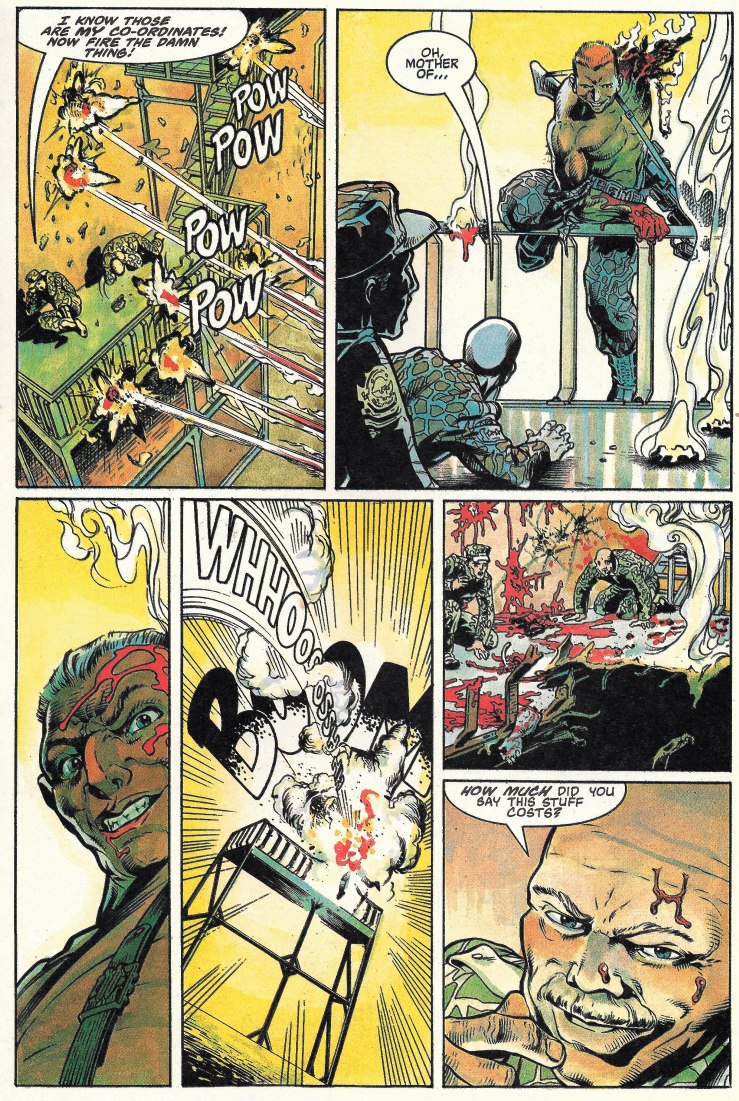 Including his CO, apparently. Luckily (?) they can expertly target a remote grenade strike on Zipped guy before he kills both of our military masterminds.

Not sure how effective these guys would be in a squad, guys. It looks like their berserker fury is more handicap than help.

The real question we should ask is who is making this stuff and why? The answer appears on the next page with the arrival of Daniel Grant, who is our head corrupt businessman for this story. Listen as he answers one final question before making it from limo to his apartment. 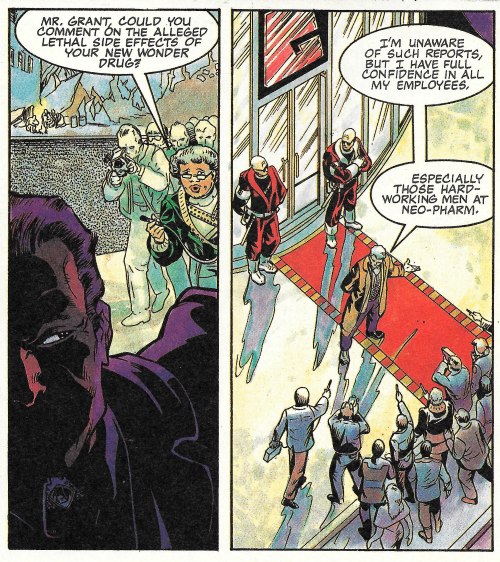 He isn't unaware and he is about to show us, after a brief two page walk-through of his lab… 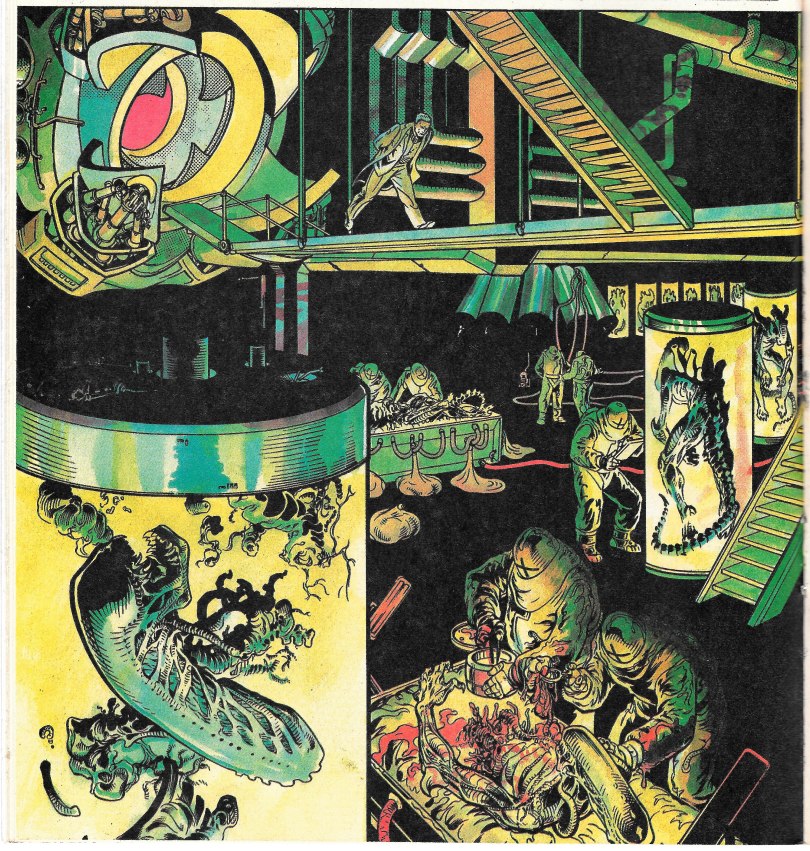 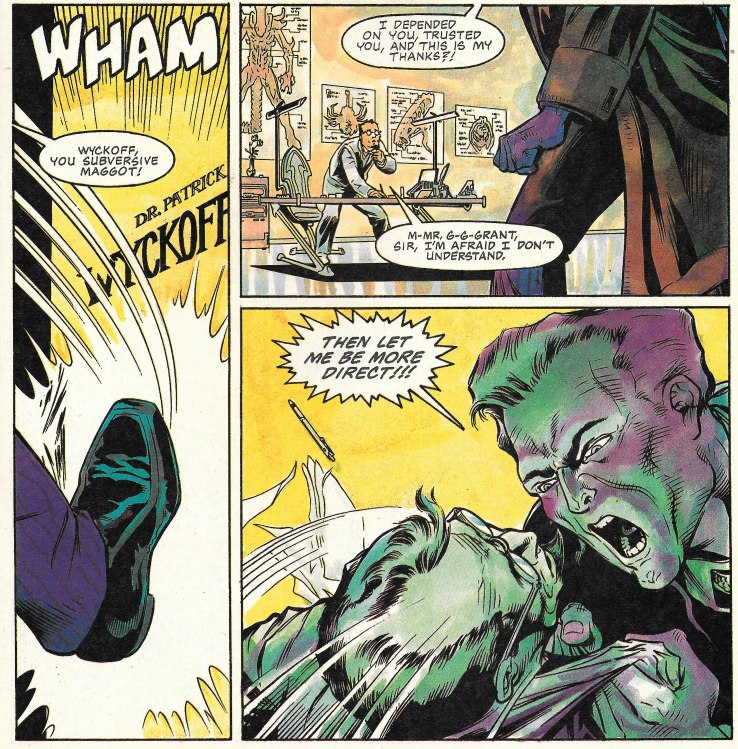 …that his faith in his employees is less that one hundred percent. Why might that be? 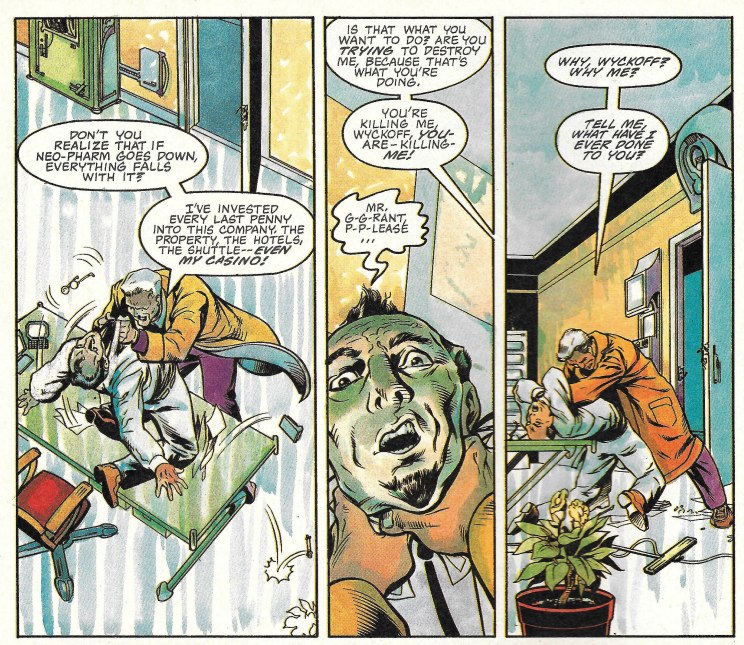 Ah, well okay then. Persuaded to NOT murder his head scientist because the door is still open and the workers in suits are preeetty-much watching him do it, Grant decides to listen and find out why his Xeno-Zip is causing so much madness. 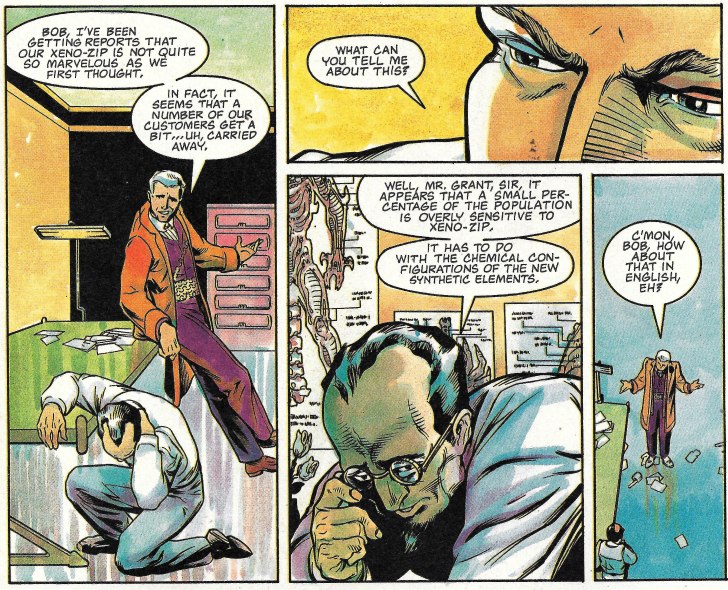 What Bob explains is that without the ACTUAL royal jelly made by the Alien queen, the Xeno-Zip formula will kill a percentage of the population that ingests it by causing these maniac like destructive phases. Let's see if Mr. Grant gets it? 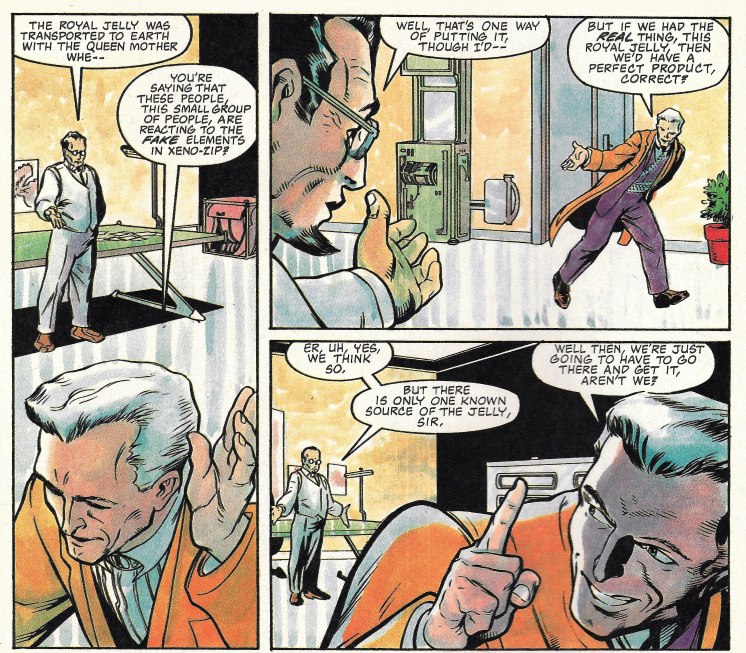 Oh he does, but his answer is not what anyone would expect. Grant takes his case to the military, who are just fine with his product only creating crazed weapons of destruction. Still he proposes a mission to extract another queen. 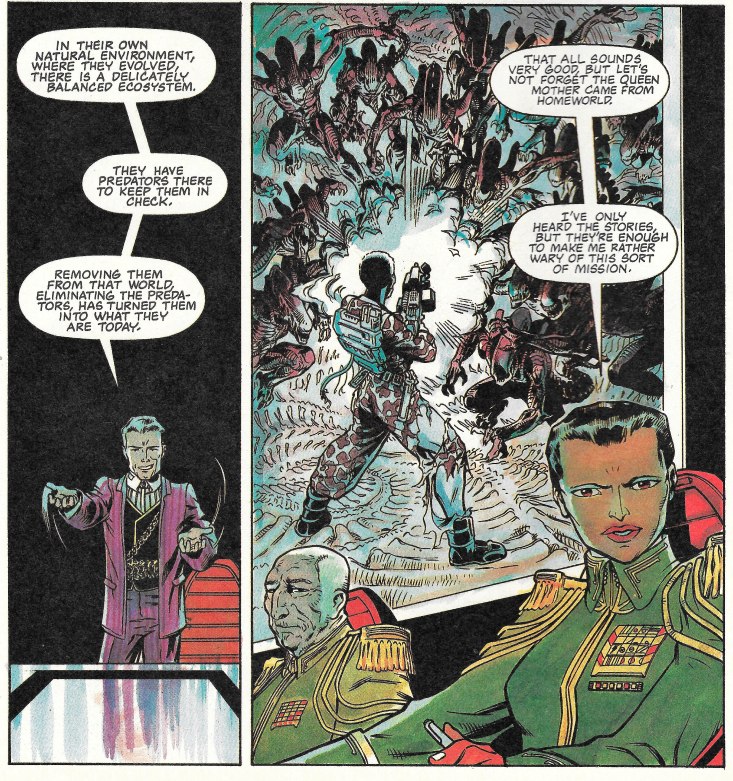 A mission to the Alien's homeworld to gather the most coveted member of the Alien hive. He doesn't sense the danger this Major understands about the environment and chooses to insult her instead. 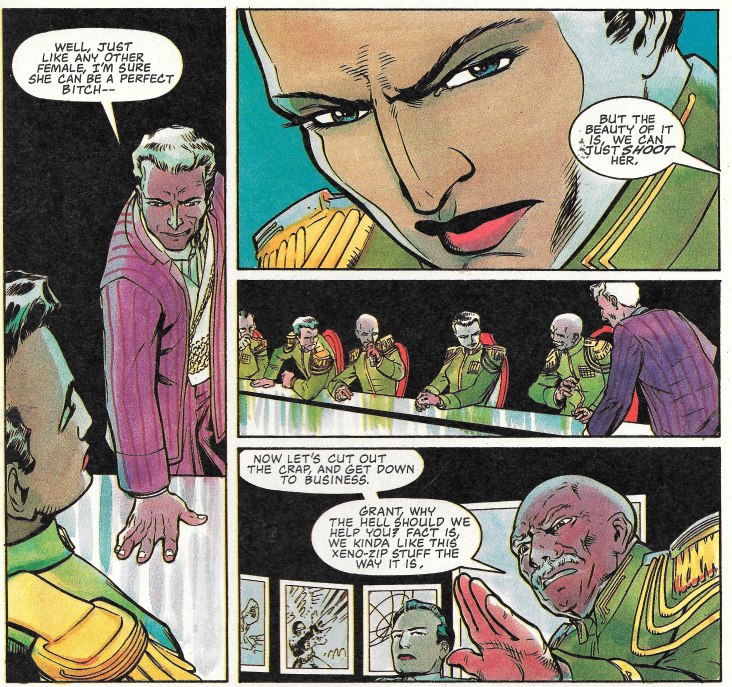 …until he makes it clear that to get what they want, they will have to give him what he wants. 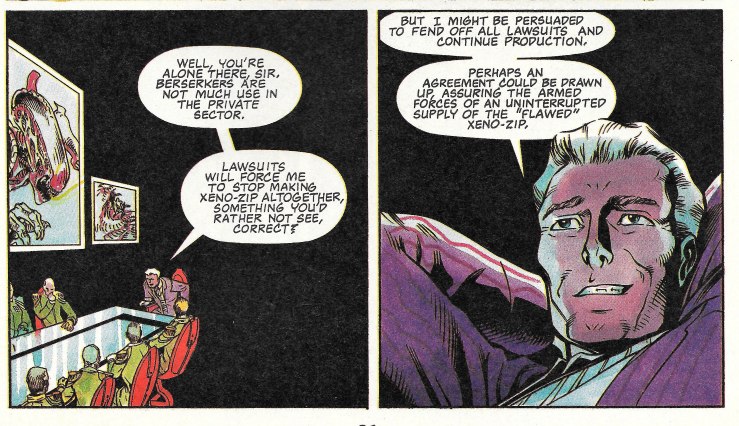 Every thinking person in the audience believes this will turn out badly. Some characters in the story do as well, including the lady Major… 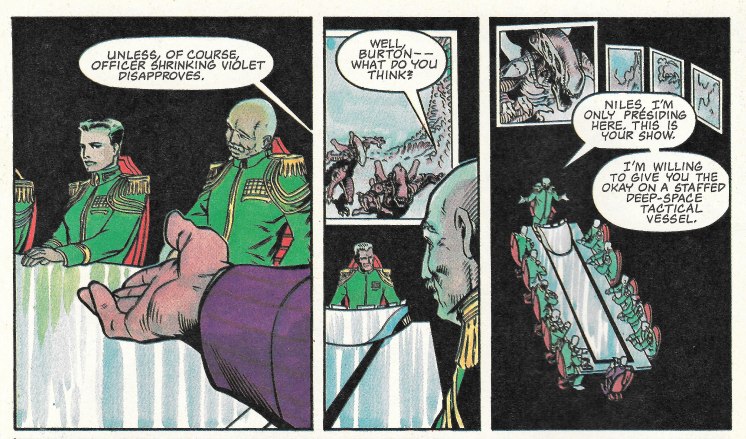 …and Grant's top scientist Bob Wyckoff. He also thinks it's not a good idea for Grant to go with them. Or that one of the research scientist team is an odd duck character who recently quit Grant's firm to join the mission when they see him loading the 'boat. 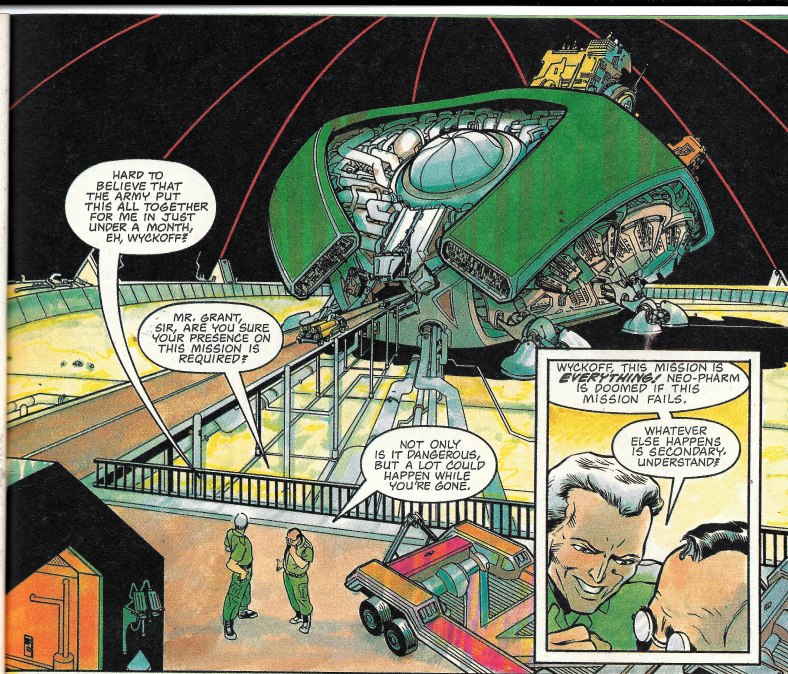 Grant blows all this off while remarking that the "Major Lee" who will lead the mission is a huge war hero/medal winner. As he's talking about him, this massive mountain of a man in uniform comes striding out and Grant mistakes him for the Major. 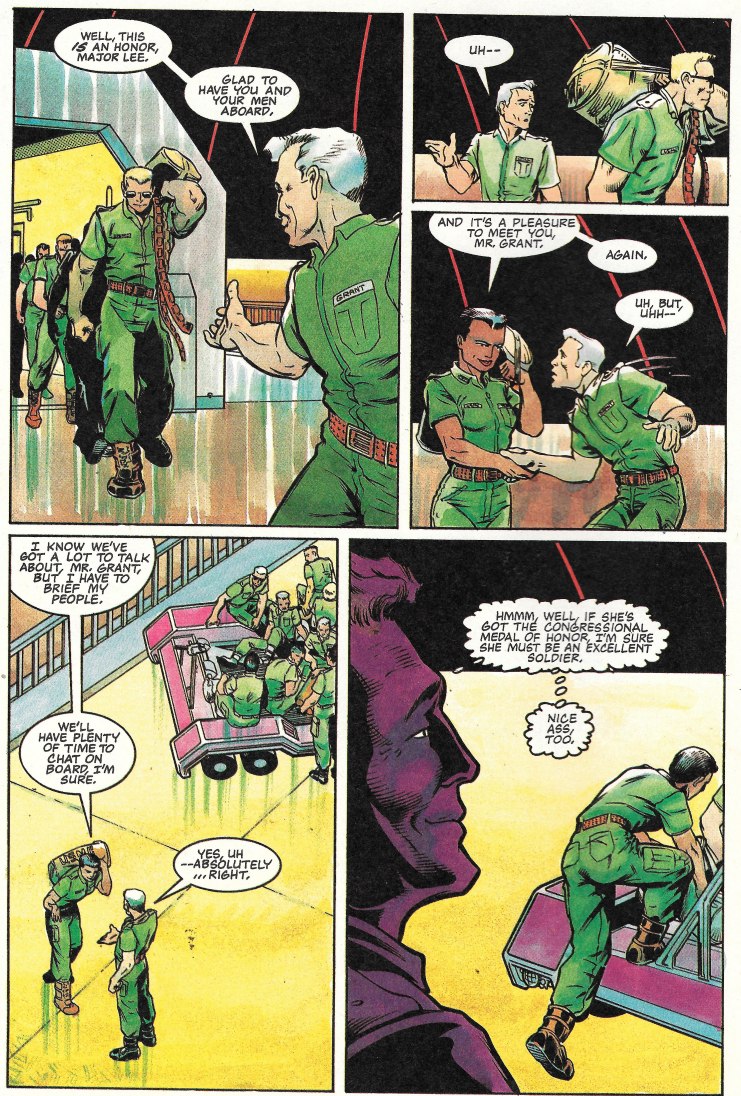 Heh! So just like with Burke in Aliens, we have someone to root for the Aliens to eat in some horrible, terrible way.

Good book so far. Wish I had the rest so I could see their reaction to finding the Alien homeworld awash in a Genocidal war. Should make for good times. And a heck of a read.
Posted by SonOfCthulhu at 2:04 AM