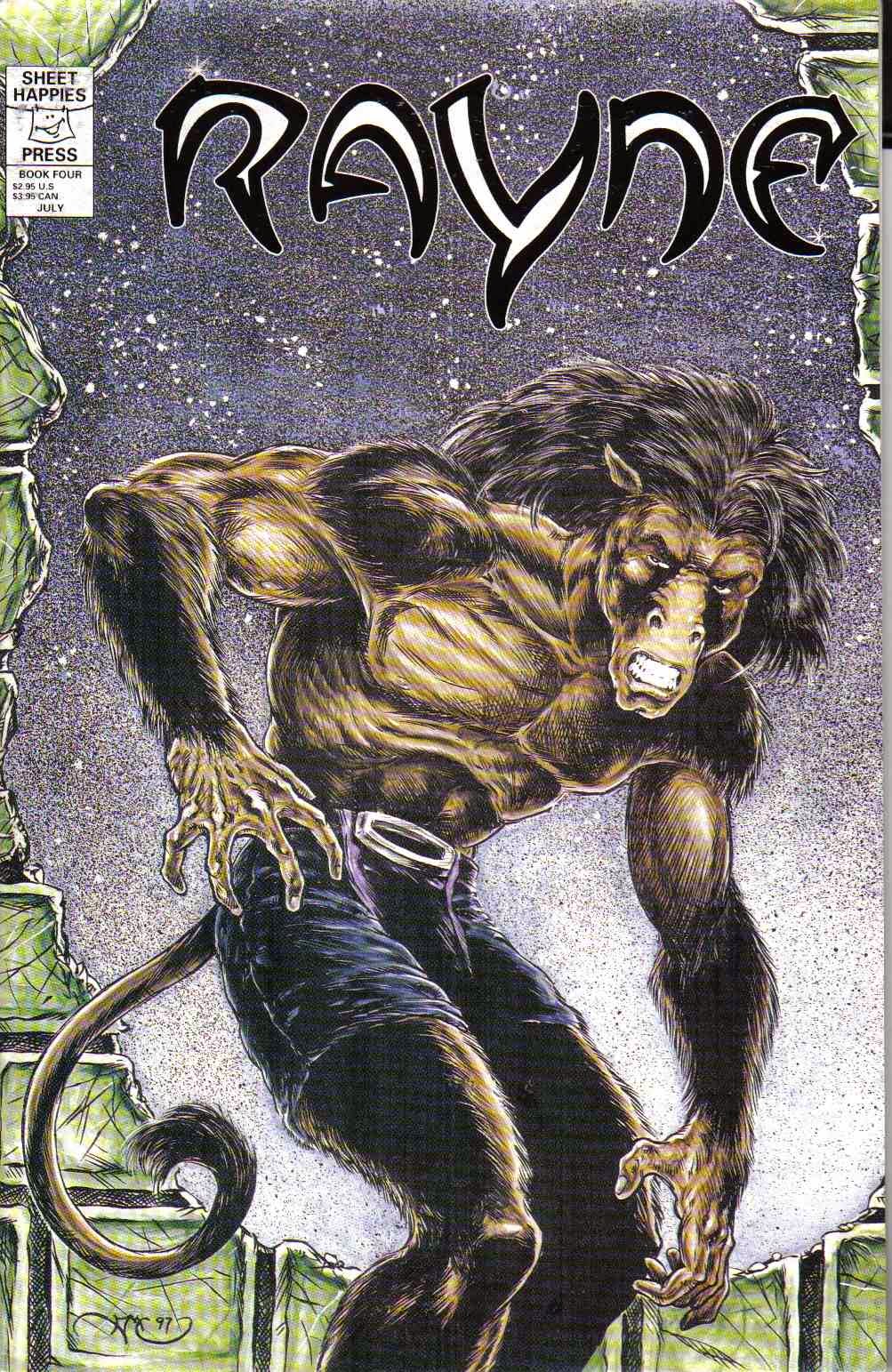 A fantasy concept that the publisher should have said “neigh” to.

Rayne is a sword and sorcery tale with a twist. In Rayne’s world all the characters are portrayed by anthropomorphized animals. This was possibly an attempt at cashing in on the TMNT popularity of the times. Needless to say, this book took a wrong turn in its execution. The villains in this issue are bird-men, a rat-man and a large man-cockroach. 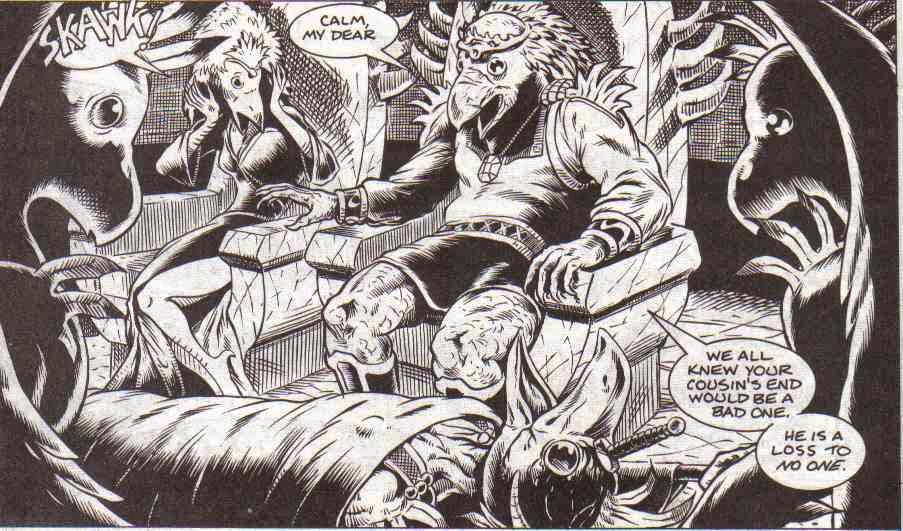 The worst thing about evil bird-men is that they aim. Think about it.

Who are our heroes, then? Why Rayne and Dohr. 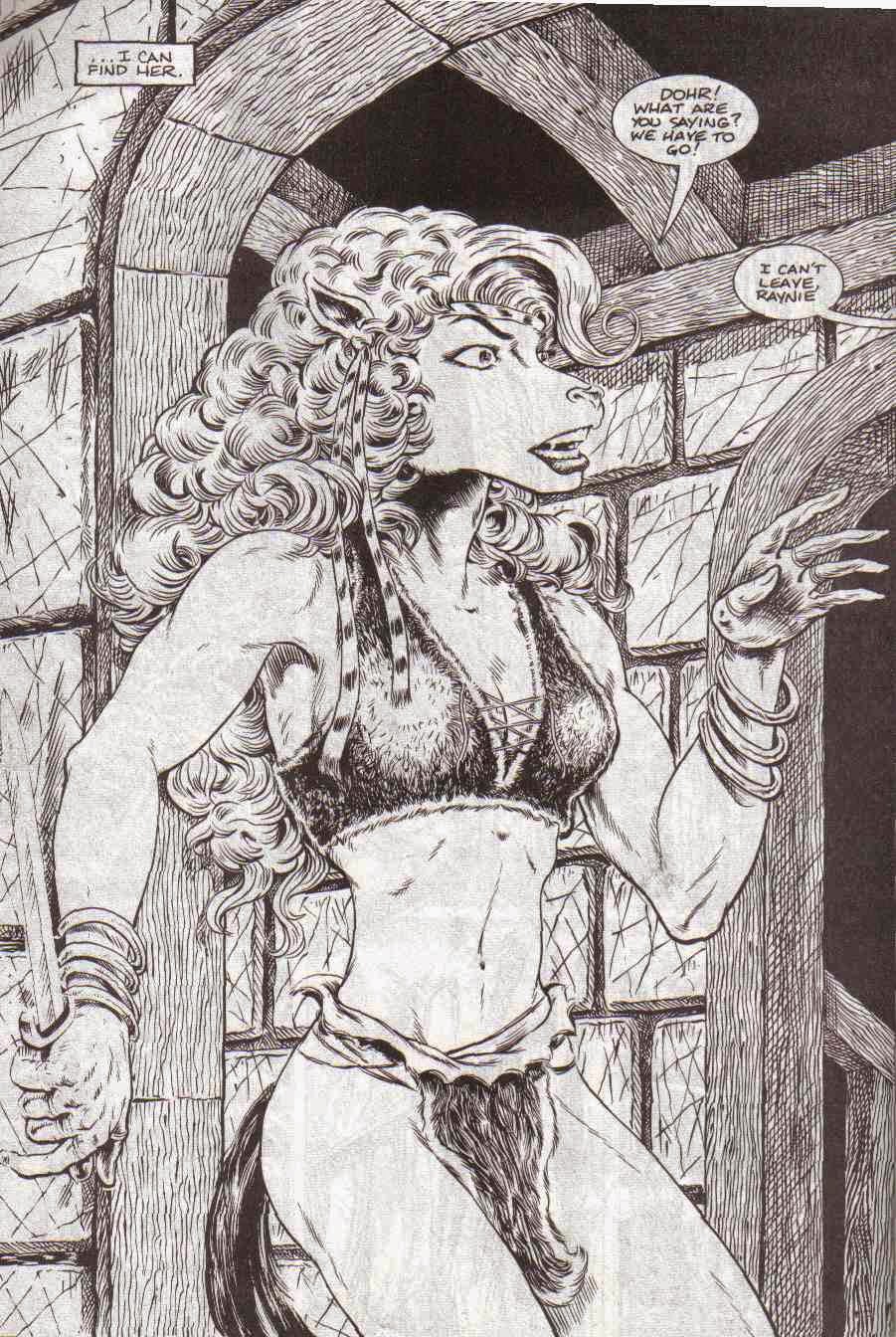 Whoa there, Rayne and Dohr are horse-people! Rayne is clad in a sexy mid-drift and cleavage-baring barbarian bikini. Ewww. I will agree that this character idea hasn’t been tried before. There’s a very good reason why: it sends very mixed signals of sex and bestiality. That’s something I wouldn’t want my youngster to be saying “Giddy-up” to.

The story is pretty standard: Rayne and Dohr were seeking medical help from the lord of this wizard tower. Seems Dohr was bitten by a rabid monster and needs a cure before he goes insane. They dispatched the host last issue when his true motives became apparent (he wanted Rayne’s body to transfer his mind into). Left on their own in the tower, Rayne and Dohr have to find a way past the monsters in residence to get outside. Unfortunately Dohr gets pushed out a window with one of the monsters.

Bye-bye, horsy, Bye-bye. So Rayne teams up with this useless bouncing puffball thing. Note Rayne’s legs and hooves in these pictures. Doesn’t something just seem wrong about them? like one too many angles or knees or something? 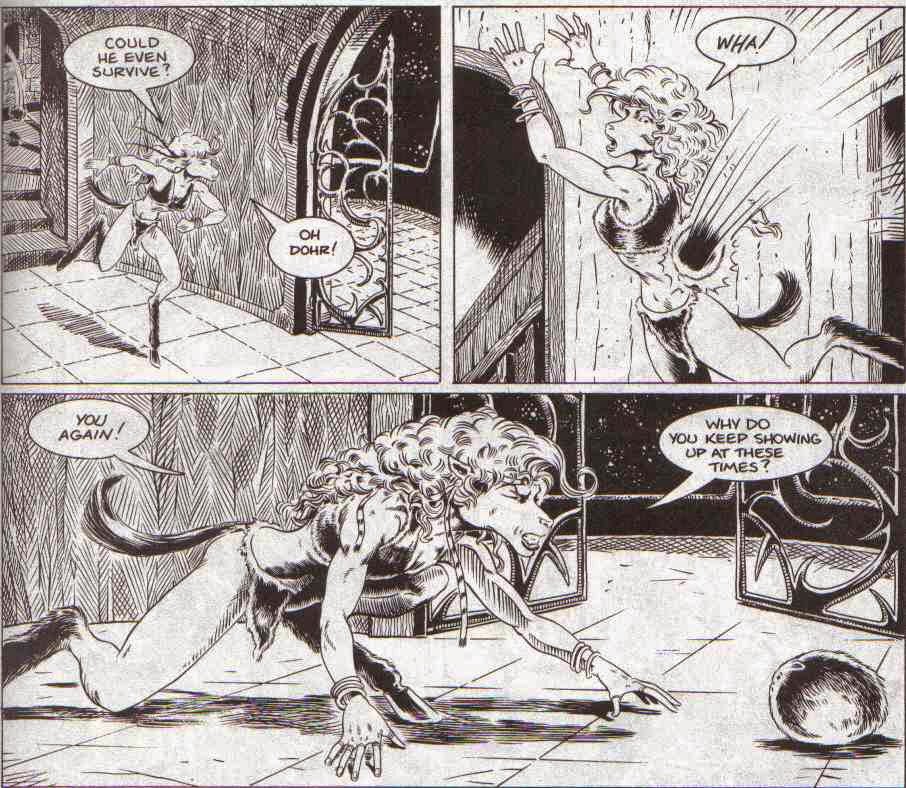 The puffball thing ends up being handy later… 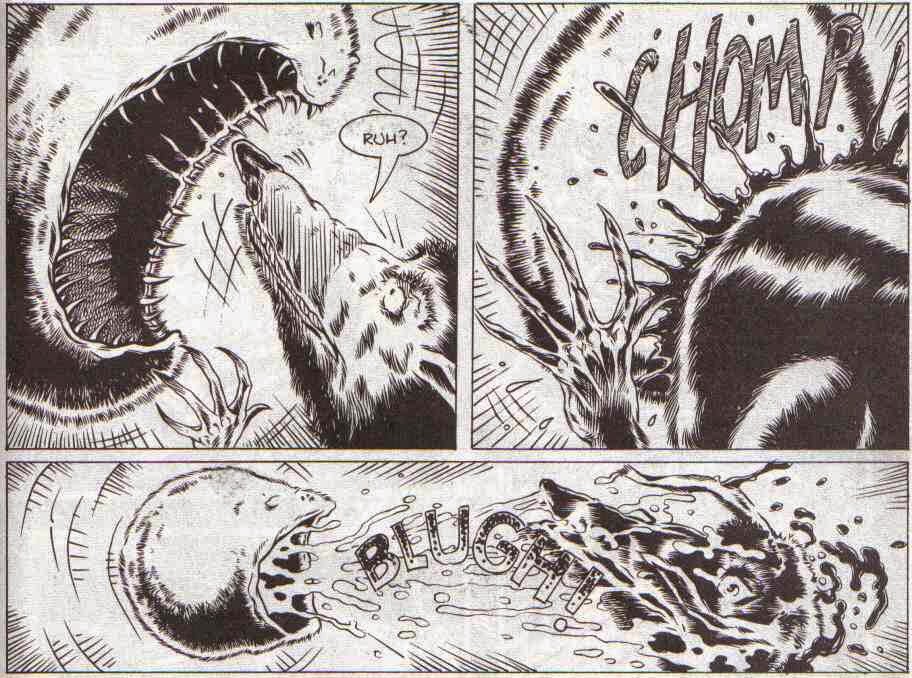 Before Rayne can trot on out to check on Dohr, the man-cockroach blocks her exit. That’s where the story ends. And by ends, I mean the book was cancelled.

There is a bit of good news in all of this. Rayne had an real winner of a backup feature by Richard Moore called “The Magic Jester”. The art was crisp and clean, dialogue was snappy and the story was just enough to fill 6 pages without seeming rushed. Four bored jesters borrow a magician’s staff without permission. 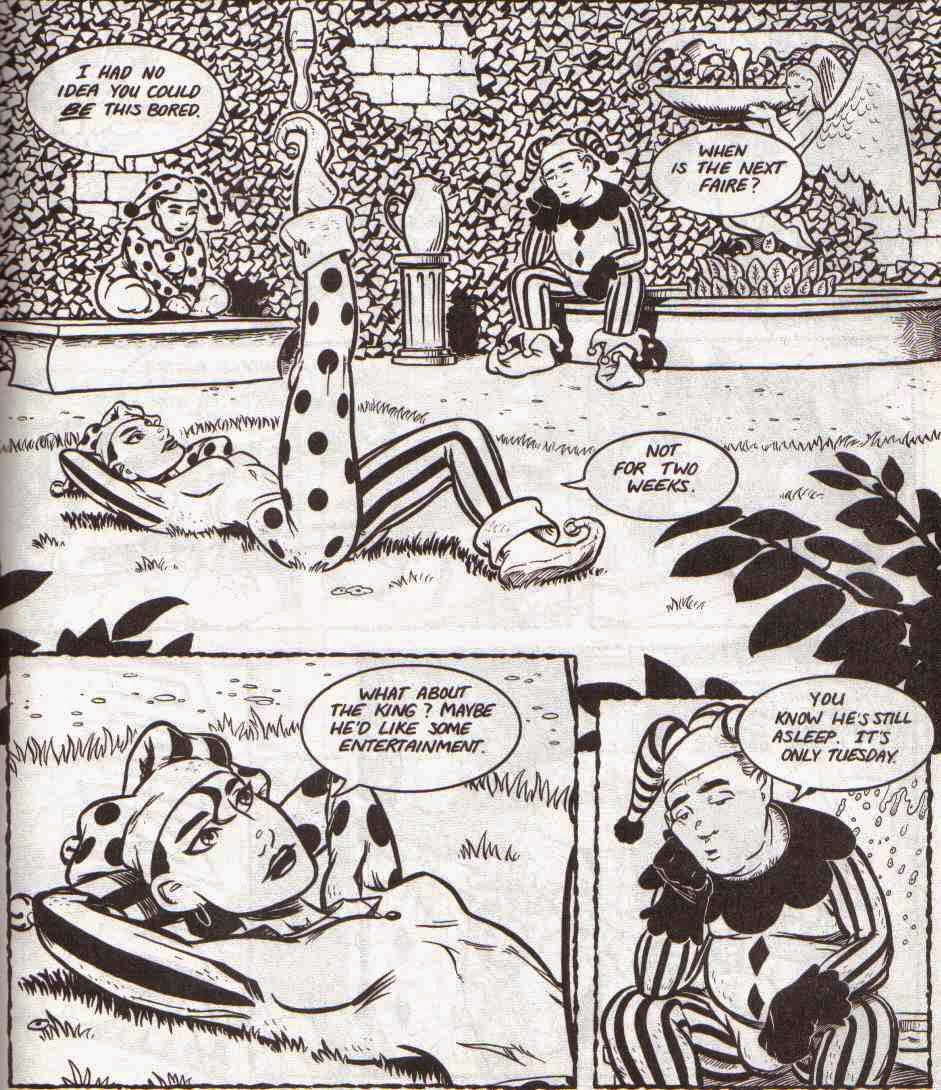 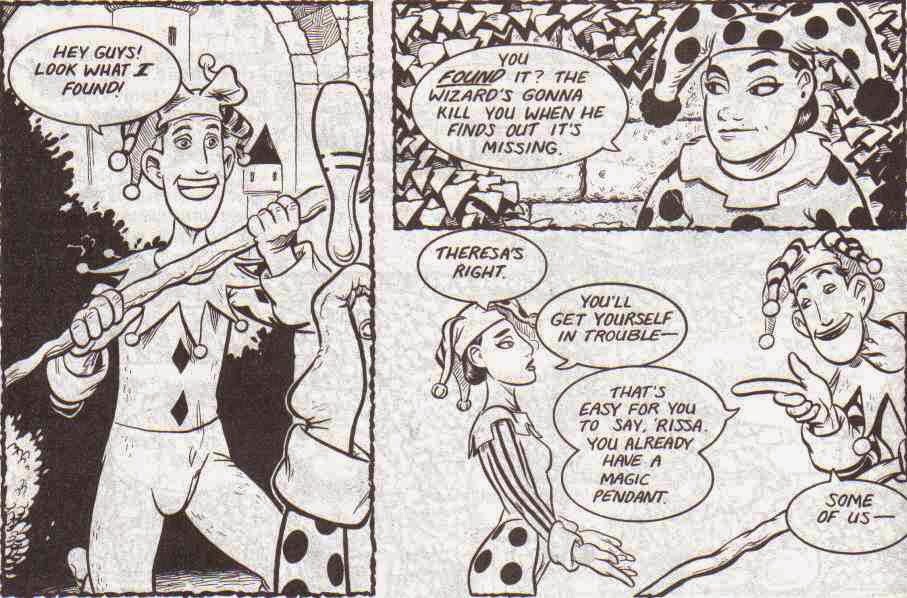 Sadly they don’t understand its power and end up transmuting themselves into all sorts of oddball things. 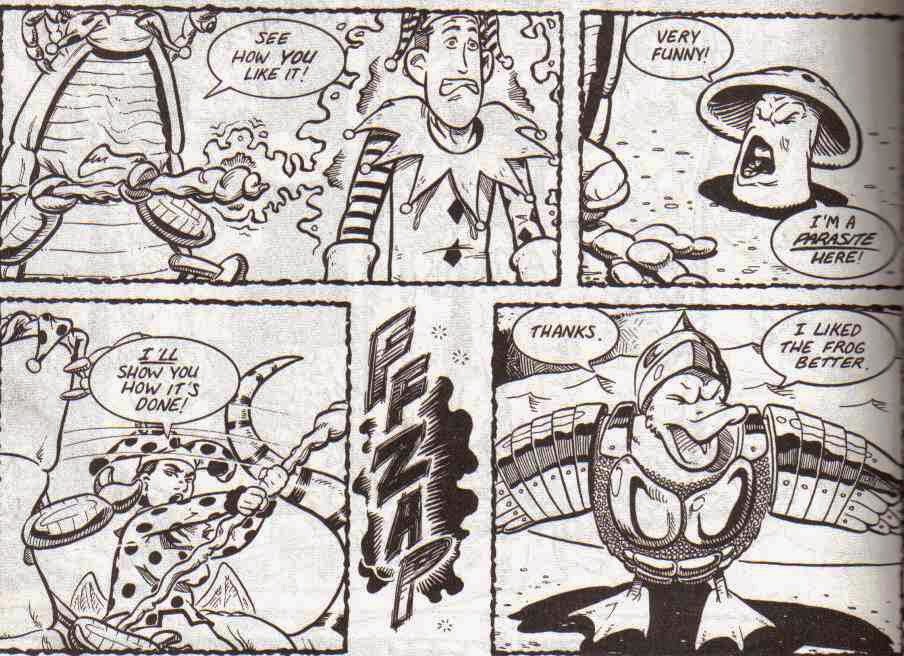 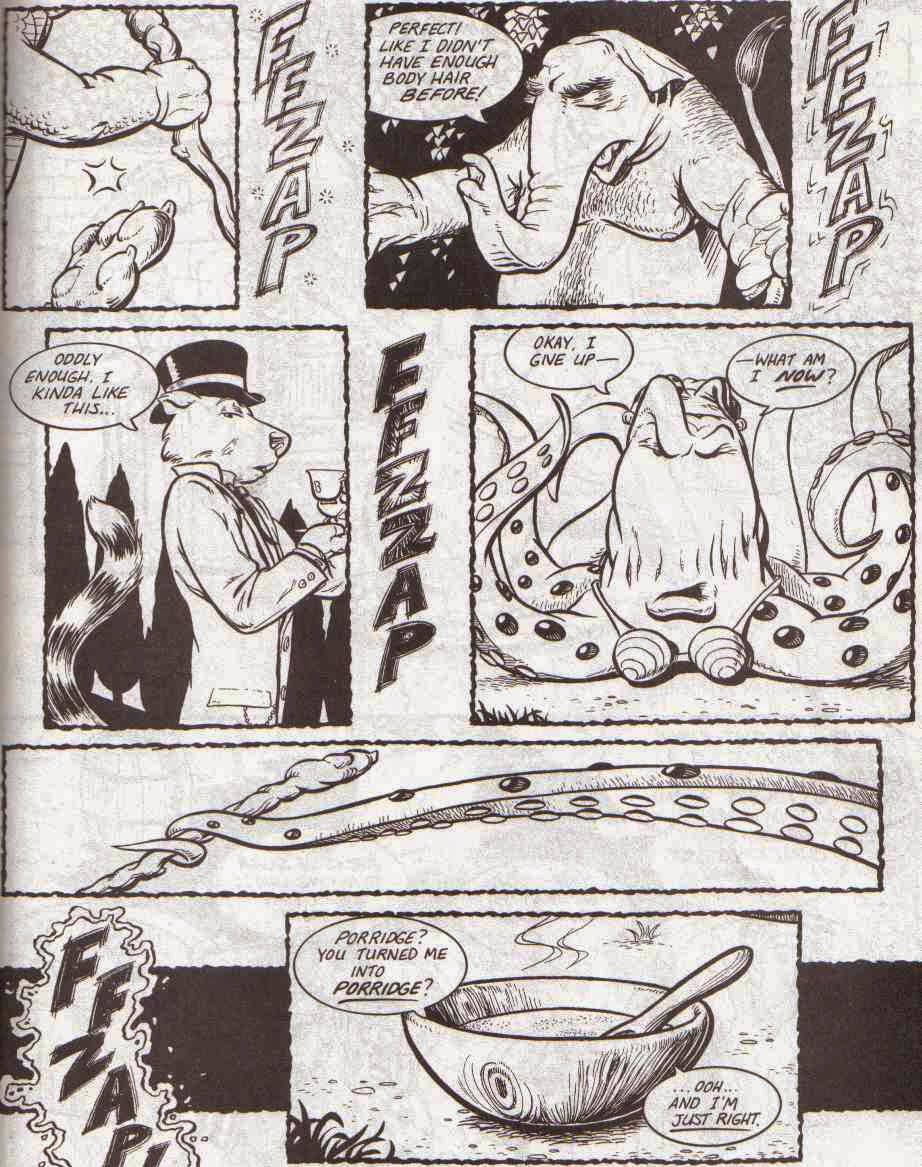 That porridge line kills me. It’s possible that this is the same Richard Moore who ends up doing “Far West” and “Boneyard” from NBM Publishing. The style looks very close. Plus the fact that Richard Moore is known for some of his own “furry” art would lend itself to him being involved in a project like Rayne. Either way, this backup feature is worth the price of the book.
Posted by SonOfCthulhu at 9:38 PM