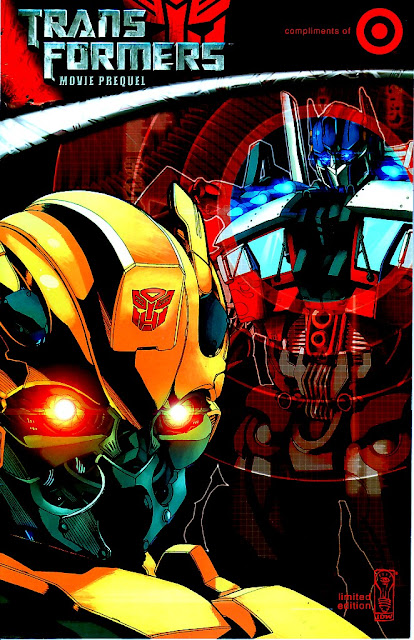 Near the top of the food chain when it comes to toy tie-ins.

There is a hierarchy of children’s marketing successes. Right near the top of that heap sits Transformers. In its right hand is an ancient battle-hardened toy army men. In its left hand sit a mound of fuzzy imaginary animals with limited vocabulary. But near the pinnacle is a spot reserved for the Transformers, robots who are in disguise as other cool toys.

Released by Hasbro in 1984, no one could have expected the Transformers to still be hot property 39 years later. It was a pretty cool idea and all, cars and planes that turned into giant robots, but who knew the idea would fire the imaginations of so many youngsters. I suppose Hasbro had hopes, of course. 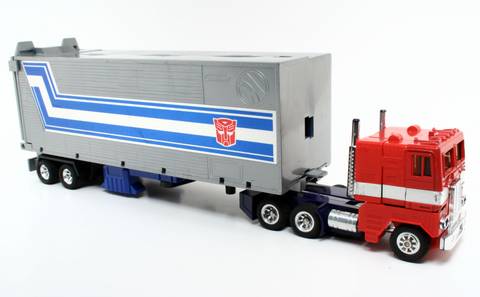 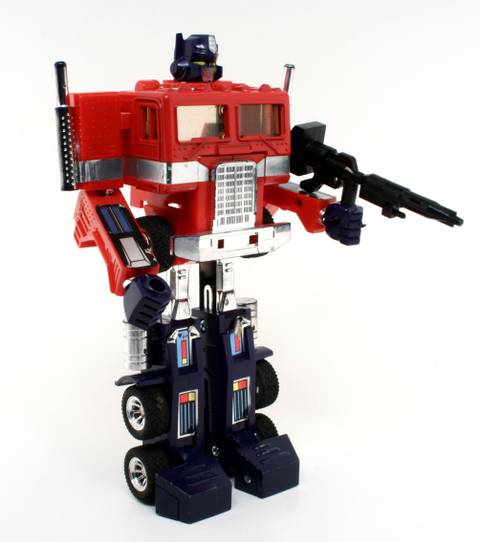 To cross promote the do-gooder Autobots and their nemesis, the evil Decepticons, Hasbro followed the same formula that had made the relaunch of G.I. Joe such a success two years before: cross promotion with a TV series and comic books. The books based on the product were so enduring that they survived multiple publisher changes and several relaunches of the product line with completely new characters. The TV show had a similar lifeline, eventually getting a big screen movie in animated form in 1986 and four live action films with the first released back in 2007. Truly Hasbro struck golden robot Heaven.

There are plenty of fan sites dedicated to Transformers, but HERE and HERE are two of the best I've seen.

Why did Transformers survive the test of time when so many other worthy candidates didn’t? I believe it is due to two factors. First is successful branding and cross selling. Hasbro never abandoned the brand name. It continued to promote transformers through various channels, investing in the product long term even when some ventures didn't pay dividends. The 1986 movie was a critical and financial flop, yet Hasbro kept right on with other Transformer projects, shirts and games. The payoff in this long-term strategy was a highly successful brand image that is still creates sales.

Secondly, the product was never allowed to get stale. So kids didn’t care about the car/trucks/planes into robots? Swell. We introduce a line of dinosaurs and insects that turn into robots. Or a set of construction equipment. Or we make a blaster gun game out them. And a set of underwear and Halloween costumes. Basically Hasbro kept reinventing ways to sell Transformers the same way Madonna reinvents herself every few years. And that constant innovation while staying near the core brand image has created a marketable product that will continue on, perhaps indefinitely.

Do I really have to explain what is the premise of this popular series? Do I have to tell you that the good Autobots and the evil Decepticons are alien machines who have brought their age-old battle to Earth? Who hasn’t heard about how the robots took on disguises to wage their battles in secret? And even though it’s sometimes called Energon or a Space Bridge or the Matrix of Leadership or the Allspark, there’s always a “Macguffin” that both sides of this war want desperately, so conflict is assured.

So where does all this leave us in the Complementary Movie Prequel book from Target? It leaves us before the start of Michael Bay’s first live action Transformers movie, without much story that can actually take place that won't seal the tissue thin plot of the big screen epic’s thunder. Bay played fast and loose with Transformer history, keeping some things and discarding others. Yes, the cars still turn into robots, but there’s been some issue with the Transformer that is the focus of this issue: Bumblebee. 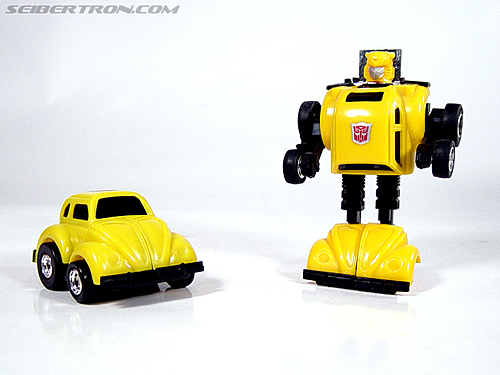 Seems Bumblebee was a VW bug in the original cartoon/comics and now he’s a beat up Camaro. While I can understand the argument that being a Camaro makes this character “cooler” than he was previously and more edgy, I just can’t bring myself to care one way or another about the change. What I can care about is how this story develops. Even though it’s only ten pages in length, there’s a certain element missing that stands out like a sore thumb. Let’s see if you can figure out what it is.

Here’s Bumblebee describing what he’s looking for. In this case, it’s the Allspark, a mystical powersource that was torn from the heart of the planet Cybertron and sent hurtling into space to keep it from the greedy clutches of the evil Descepticon Megatron. Then Bumblebee recounts how he’s on a recon mission searching Earth for its presence.

Bumblebee has a lead on where it might be too. His one lead is an ancestor of the Witwicky family discovered the Allspark’s whereabouts way back in 1897. Using his wireless computer hacking skills, Bumblebee hacks the medical records while his engine is idling in the parking lot.
And therein lies a big part of this preview’s problem: lack of Transformers. By Transformers, I mean pictures of giant robots. Bumblebee the giant robot finally makes an appearance on page NINE of this ten page preview. By that time we’ve watched him drive around for eight fricking pages. It’s like an extended commercial for beat up Camaros. 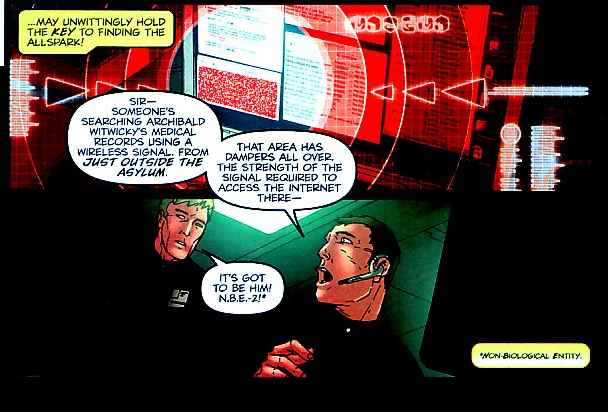 But wait, there is worse coming: Government types are instantly alerted to his hacking and send in a strike team to capture him. It’s almost like they are prepared for him as they rush him with black ops vans and Apache helicopters. And that’s when it happens…

That tenuous link between storytelling and product placement becomes transparent. He just happens to pass by a semi pulling a truck with Target’s logo on it. And the book is a freebee given away by Target stores. What. A. Coincidence! To be honest, it’s hard to really be bothered by this. I mean the whole Transformer universe is built on using a story to sell robot toys. It’s not like product placement is bad in all cases…

Uh…and it’s not like the Target folks are canvassing the book with ads for their stores.

Well, at least it doesn’t affect your reading of the story… 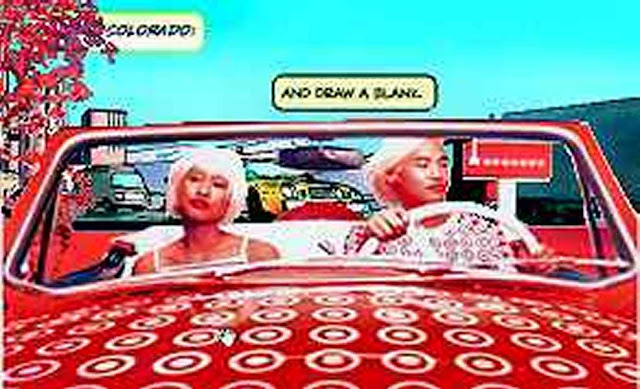 Alright! Stop now. That goes over the line. No more of this Target! Or I swear I’m not going to spend any time at all ogling those four pages of Transformers toy ads you also included.

Now where was I? Oh yeah, Bumblebee is searching for the Witwicky heir and being pursued by black ops agents. Looks like someone else is on his tale too. 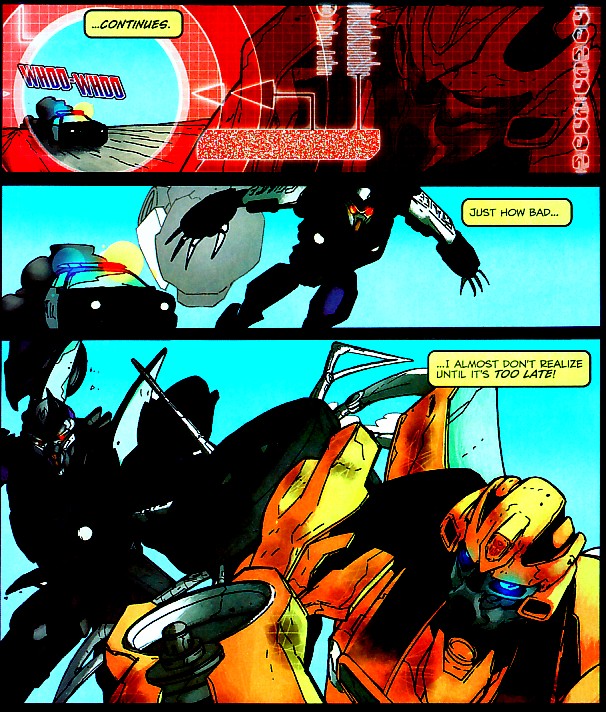 Yup, Barricade is about to make life very painful for Bumblebee. Or at least it looks that way. Hard to tell since after eight pages of following around a car as it drove places, we’ve reached the end of the free preview. Sadly this would end up having a better plot than the four Bay Transformer movies it helped usher in.

Target does mention that you can get the exclusive to Target actual movie prequel comic at Target. Oh and did I mention Target.

No matter, the Transformers are here to stay for a long, long time. I’m sure a slew of new (and better) Transformers comics will come with each new transformation.

(Oh, and for those who care: here are the undoctored photos from above. The semi one is real, the rest are kind of my reaction to that one panel.)

Posted by SonOfCthulhu at 5:07 AM