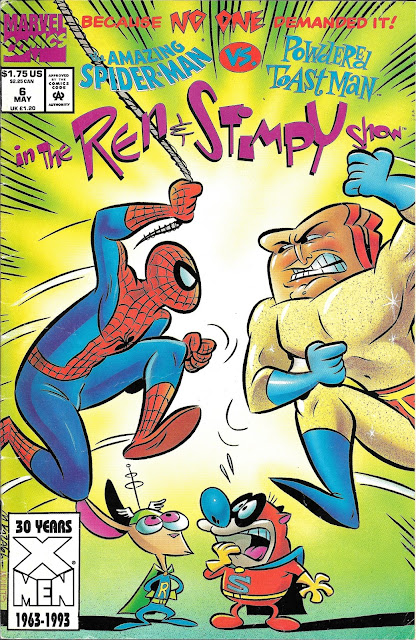 Bizarre mixups continue to trickle out of the Crapbox

Texas heat and my poor organization skills must have allowed an Amazing Spider-Man comic and the Nickelodeon tie-in book for Ren & Stimpy to meld together.

And just like last week's Barack the Barbarian, this blending of two things that shouldn't work, kind of produces a decent story on both levels. Not great mind you, but decent.

My love for Ren & Stimpy might have something to do with my affection for this one. Also my love of a good Dan Slott scripted story, Slott being one of my favorite Spider-scribes. 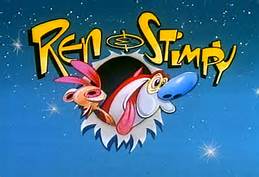 When I say that I love Ren & Stimpy, there is always a pesky asterisk that has to be added to that statement. The odd duck pairing was the brainchild of John Kricfalusi, a duo he created while studying at Sheridan College. He was signed to produce a series by Nickelodeon in 1989, one of the first three original series that network created (the other two being Rugrats and Doug.) Kricfalusi would only work on the show for the first two years, however, as tensions over his racy and violent episodes clashed with Nickelodeon's Standards and Practices section. Eventually the relationship between creator and network devolved to the level that Kricfalusi would only talk to them through his lawyer. Some of these tensions were ascribed to missed deadlines due to the approval process.

These first set of episodes are golden to me. They skirt the line of good taste in the BEST way possible. They are accessible to children yet are entertaining to adults as well. Kricfalusi produced an amazing, marvelous thing.

And then Nickelodeon pulled the plug on him. They ousted him as director, offered him a position as a consultant (which he refused) and gave creative control over to Bob Camp.

Camp's Ren & Stimpy wasn't the same. In the original, Ren always seemed our everyman, our hero. Even in the most bizarre situations, it was still easier to identify with the crazy, Mexican-accented Chihuahua than it was to find a commonality with Stimpy, the dim-witted cat who ate litter. Camp reversed these roles and made simpled-minded Stimpy the centerpiece. Gone were the more racy, Cheech & Chong type story-line vibes you got in the first year, replaced by endless goofy preachings from Stimpy.

The cardinal sin, however, was that the show wasn't funny anymore. 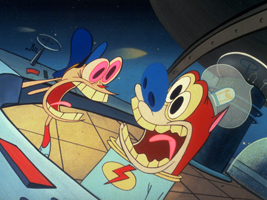 Something about holding back these characters after they had already infected us with their particular brand of SPACE! MADNESS! defeated the humor inherent in their adventures. It would struggle on for two more years before being retired. After a long hiatus, it was revived in an even more Adult version on Spike network in 2003, but by then the moment had passed and the new content went too far for all but the most die-hard fans. I hear tell they might have a short before the next SpongBob movie too, but that might just be rumor.

What we have here is Slott doing his best to put Spiderman into a Ren & Stimpy episode and not the other way around. So we begin with the duo eating breakfast when an emergency occurs… 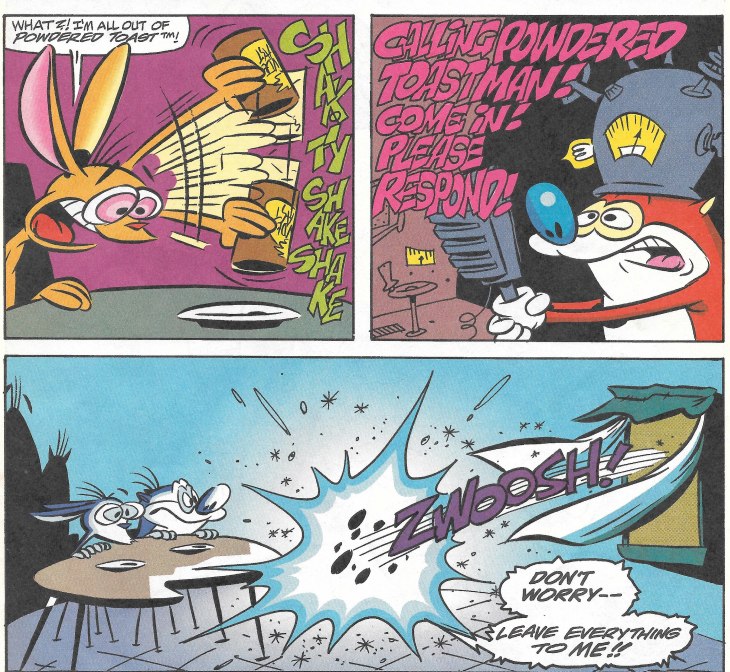 …Which, of course, Stimpy summons… 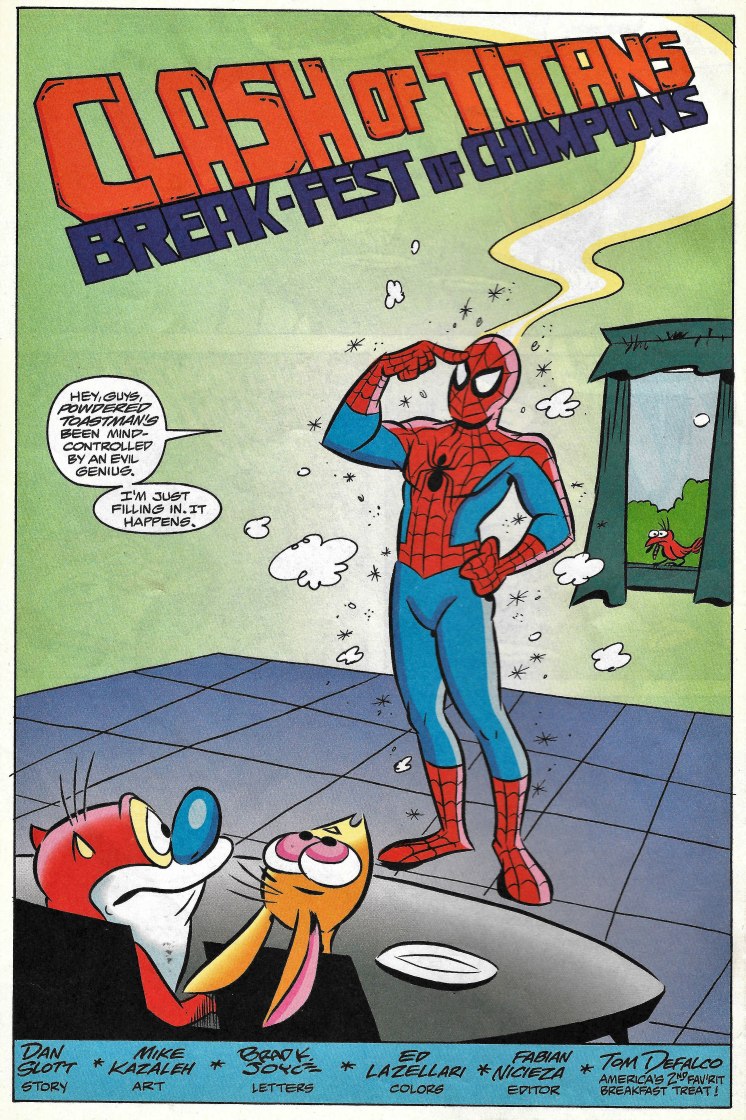 Yeah, so Spider-Man appears and his little pronouncement kicks things off to a great start. Powered Toast Man is mind controlled by this talking donut-thing. Spider-Man uses his webs to create web-based toast for the dog and cat and then vamooses. Which is where get the standard Ren & Stimpy trope of "oh, there is lots of evidence they are going to say one thing…" 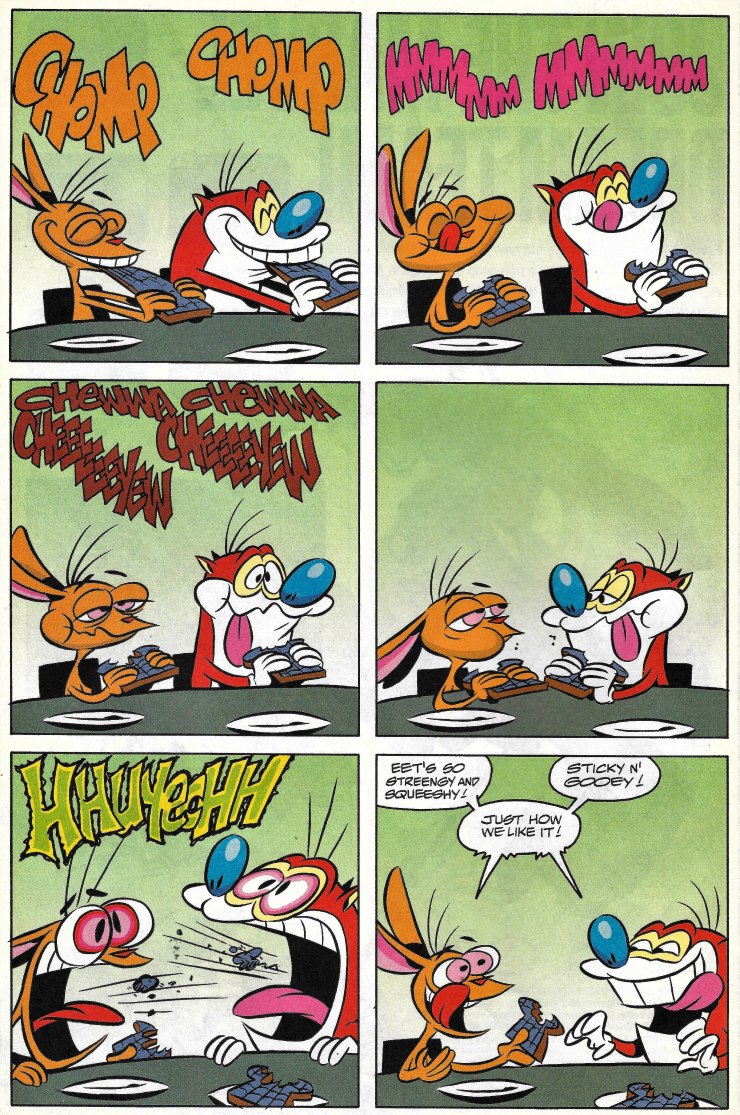 "…when instead they say the opposite."

Spiderman gets a call from headquarters (through his spare pair of Powered Toast Man underwear – don't ask!) only to find that trouble is brewing. 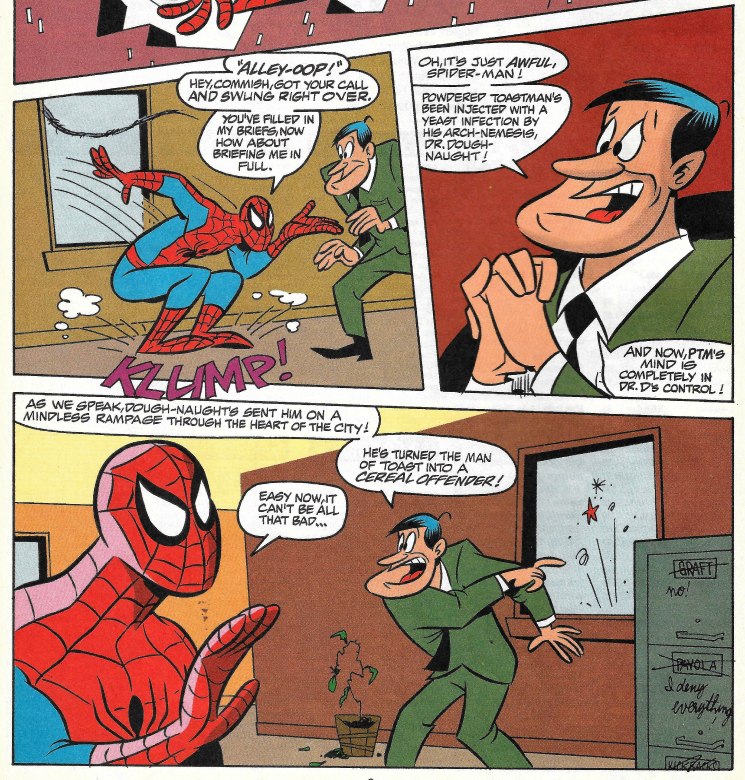 And here you have it: the formula for the rest of the issue. Every few panels will be some bread or breakfast related pun. If you enjoy puns (and I do, for the most part), you'll love this issue. If you find puns groan-tastic wastes of your time, you'll hate the issue. Like a breakfast cereal, all comes down to your personal taste. 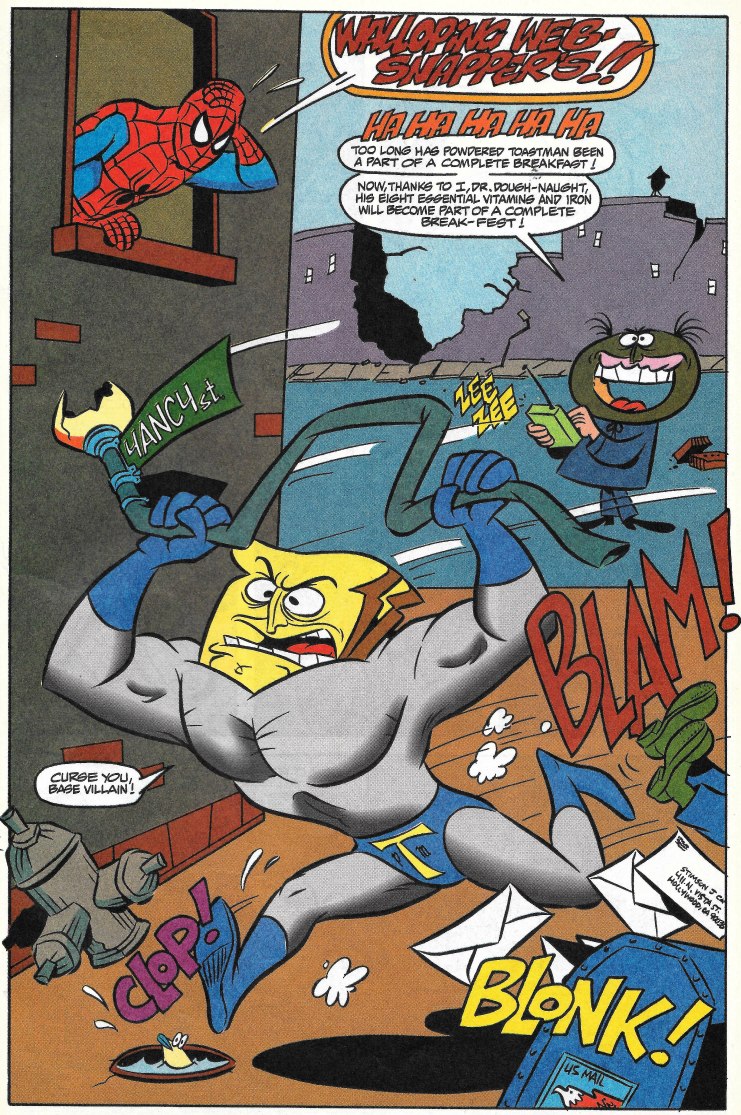 And the art is pure Ren & Stimpy.

Oh, there is a few smatterings of other types of humor, like this self-referencing bit on the comics industry here. 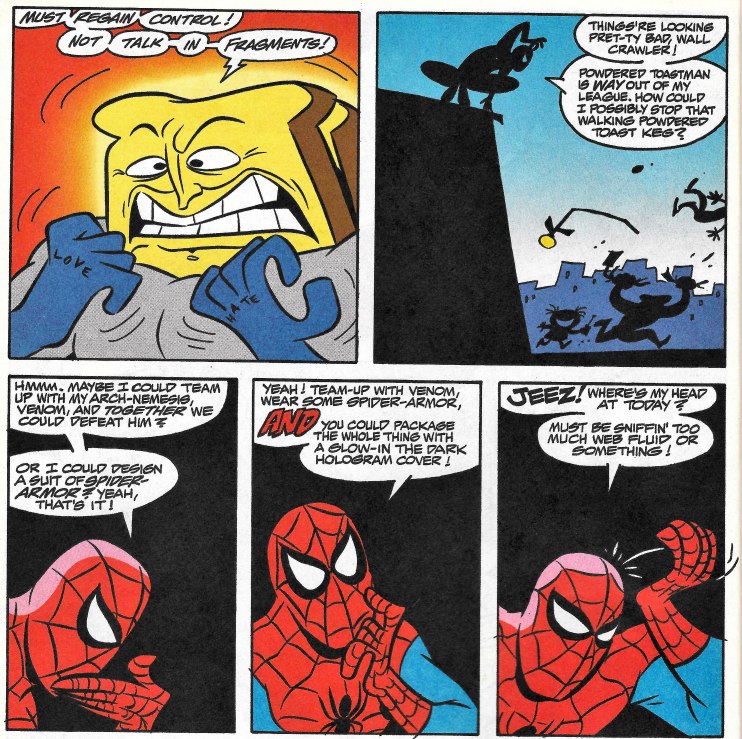 Chuckle-worthy if you ask me. And I did smirk at P.T.M. using the underarm fart sound motion to fire croutons at Spidey. Silly stuff. And the issue is literally packed with this battle. It goes on for several pages, almost to the point of being too long. 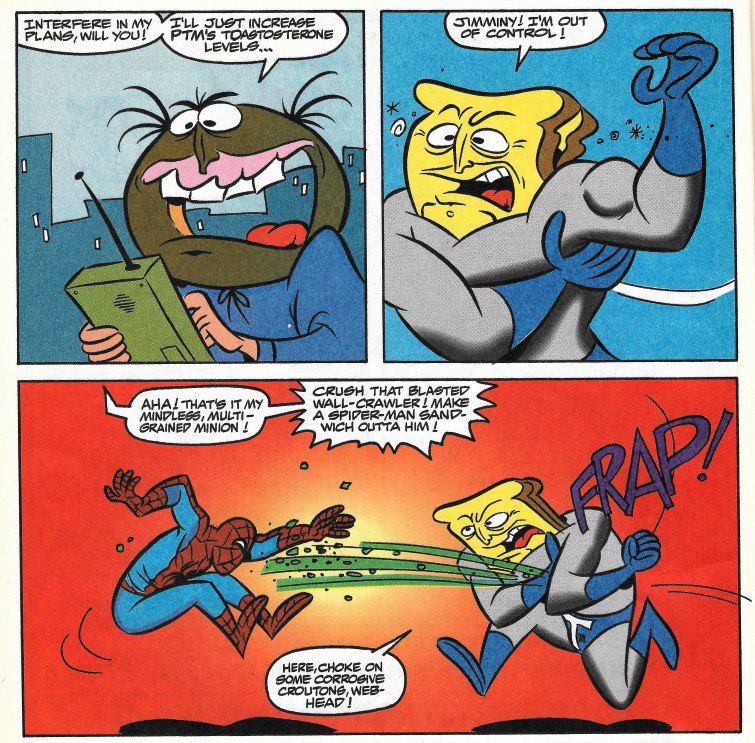 We have Spider-Man get the upper hand. 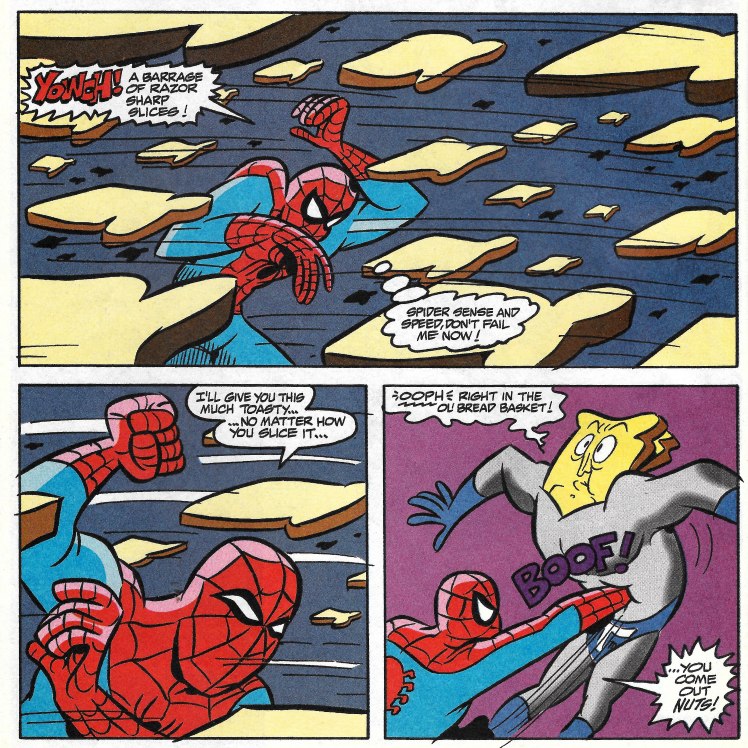 Only to be trapped in Powered Toast Man's giant booger. Eww! 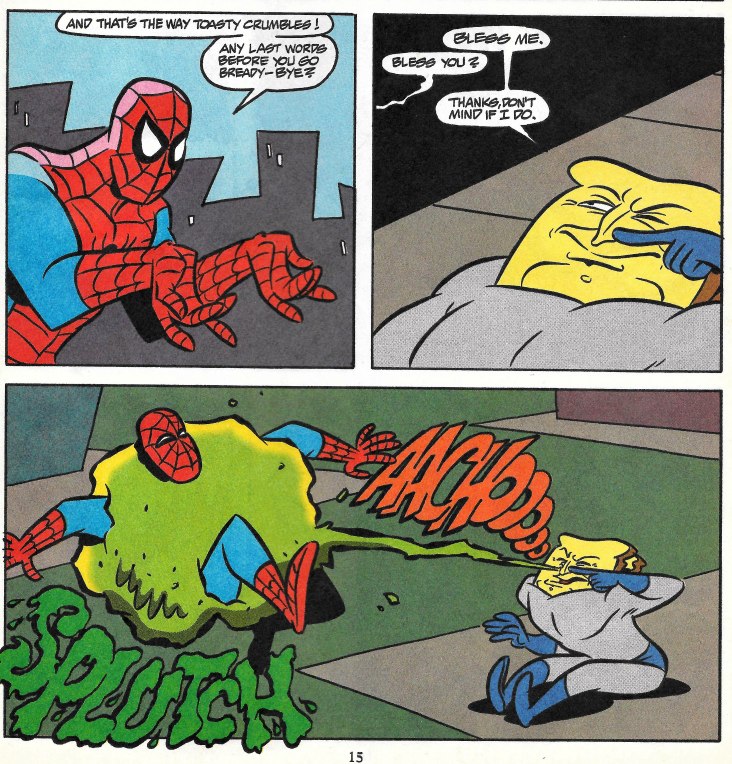 Which leads to the "Spider-Man talks himself into not giving up montage." 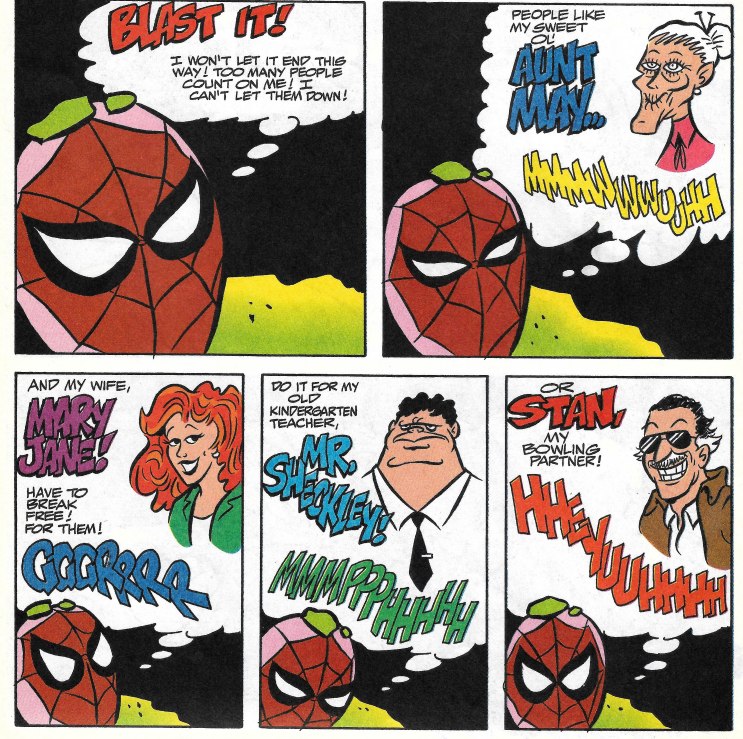 And yes, I snickered a bit at this part. 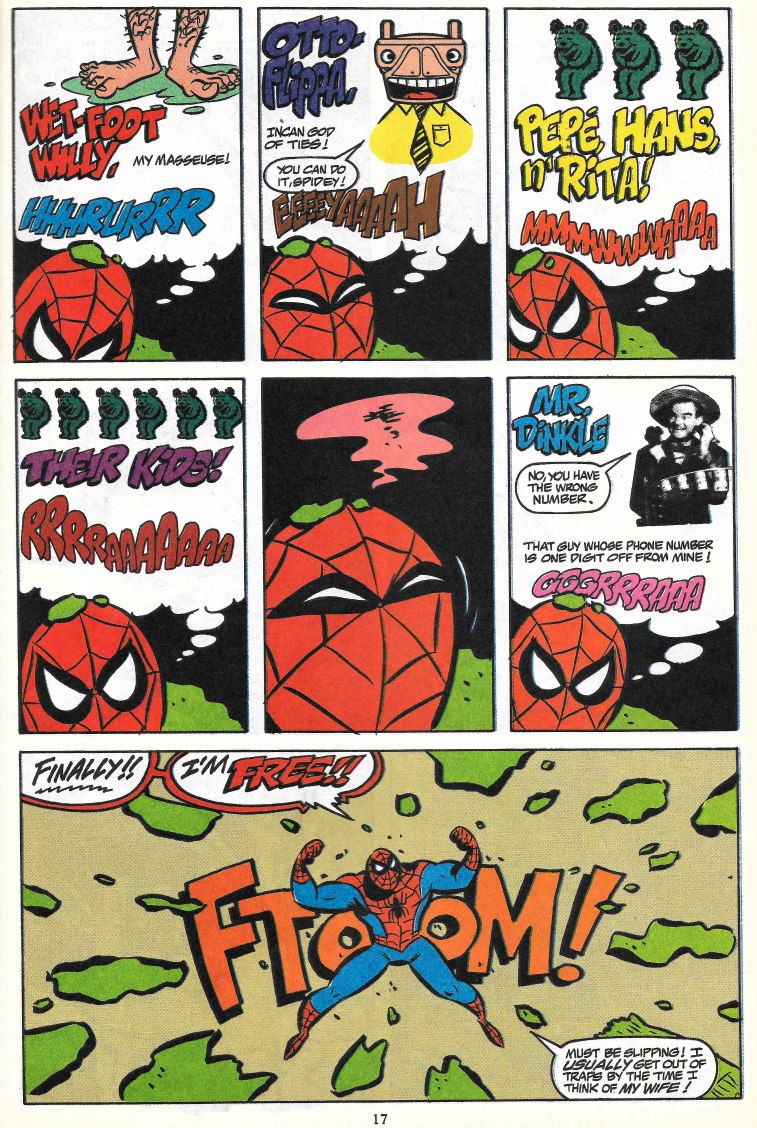 Slott's a good match for this material. Generally his writing is a bit humorous and here he dials that up to eleven. Either that or he just lets off the shackles that normally keeps him in check. Whatever the cause, the effect is some genuinely silly, funny moments that caused me to crack a smile.

What I thought would be a groan-filled issue has some cleverness to it. Most cartoon-to-comic transitions lack the finesse of the source material, but Slott seems right in the groove of Ren & Stimpy's madness.

Madness that includes dunking P.T.M. in milk so he's too soggy to fight… 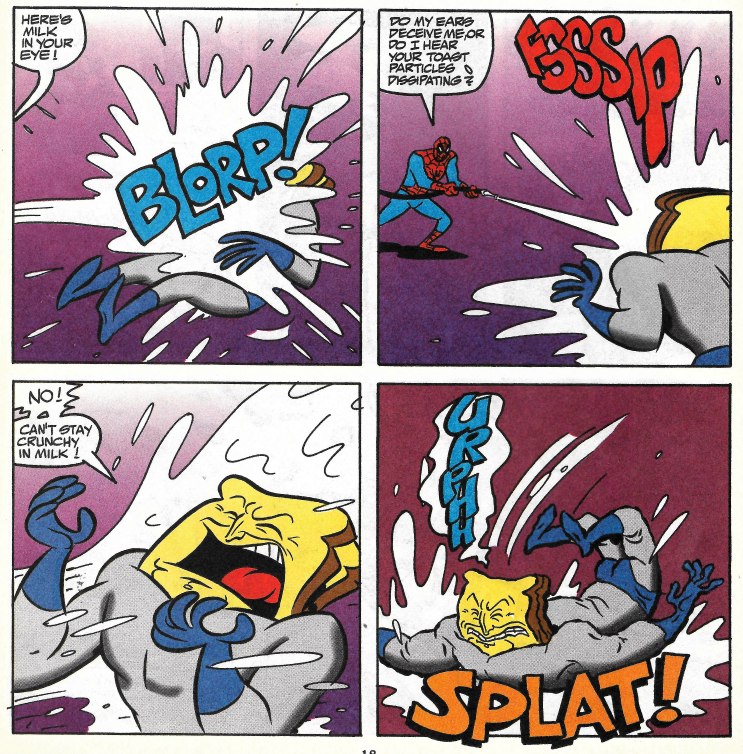 …and then letting Spidey get a lead pipe to the head. OUCH! (Remember that bit about violence in R&S cartoons? Well, here you go…) 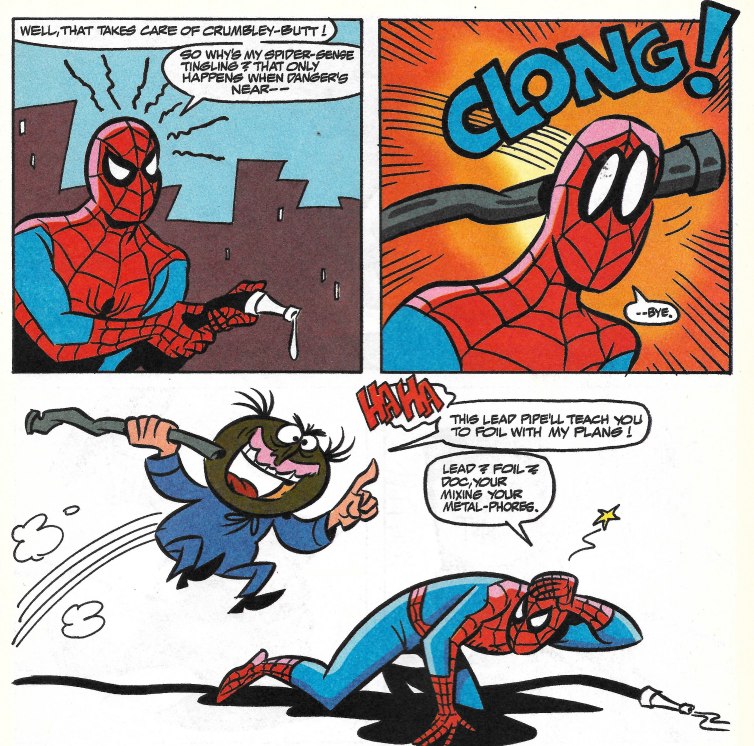 Which leads to a P.T.M. "Popeye" moment. 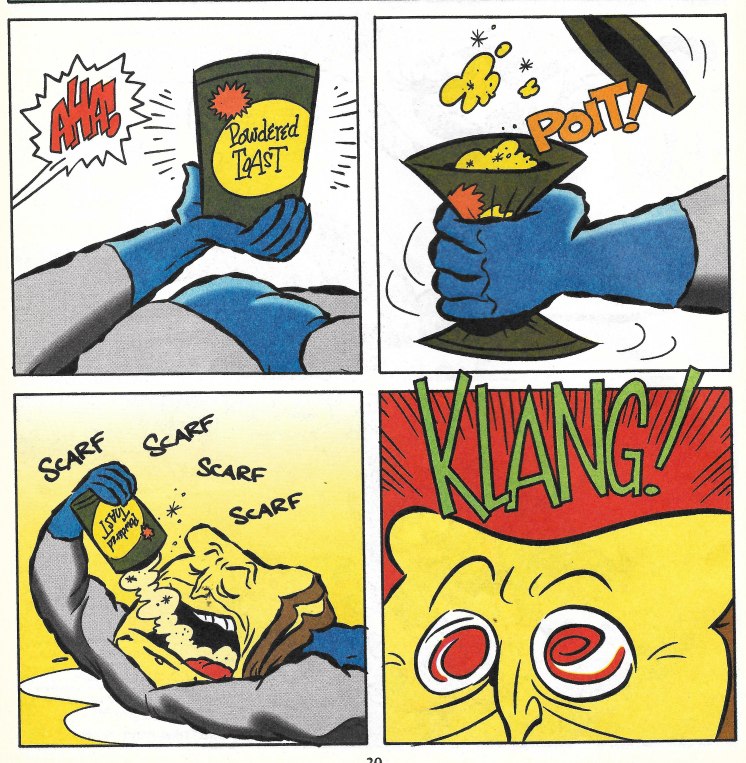 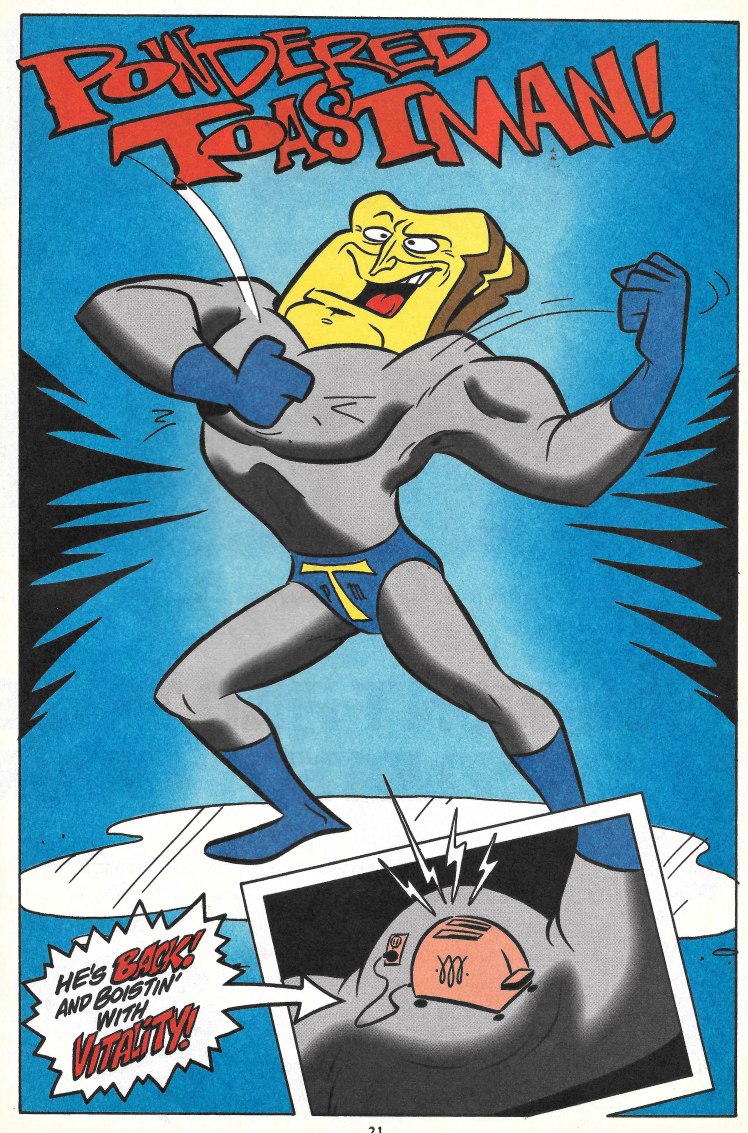 Again this is silly fluff that is well executed, given the art stylings of the cartoon. And Spidey gets to help foil the bad guy, so it's all good there too. 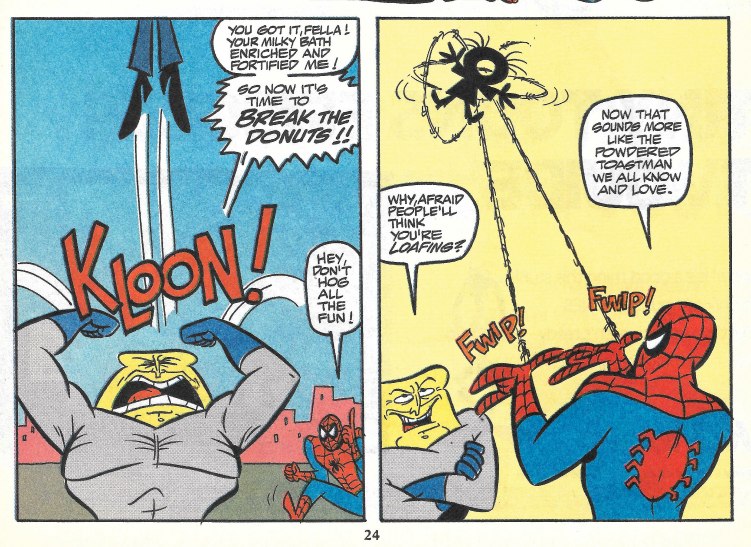 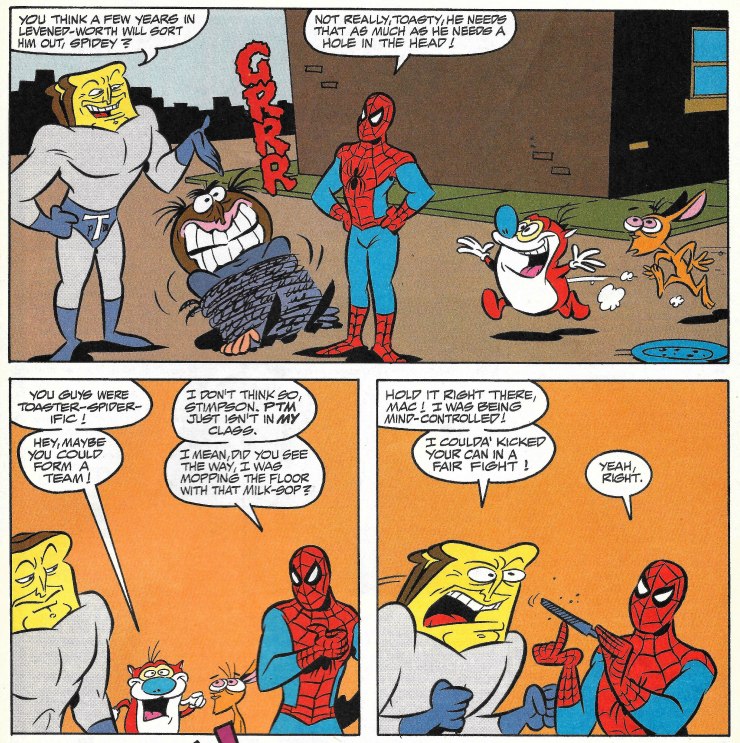 To which P.T.M. punches him through a building.

There are also two short joke bits starring Spider-Man at the end that are just as silly as the story, the smaller of the two presented below. 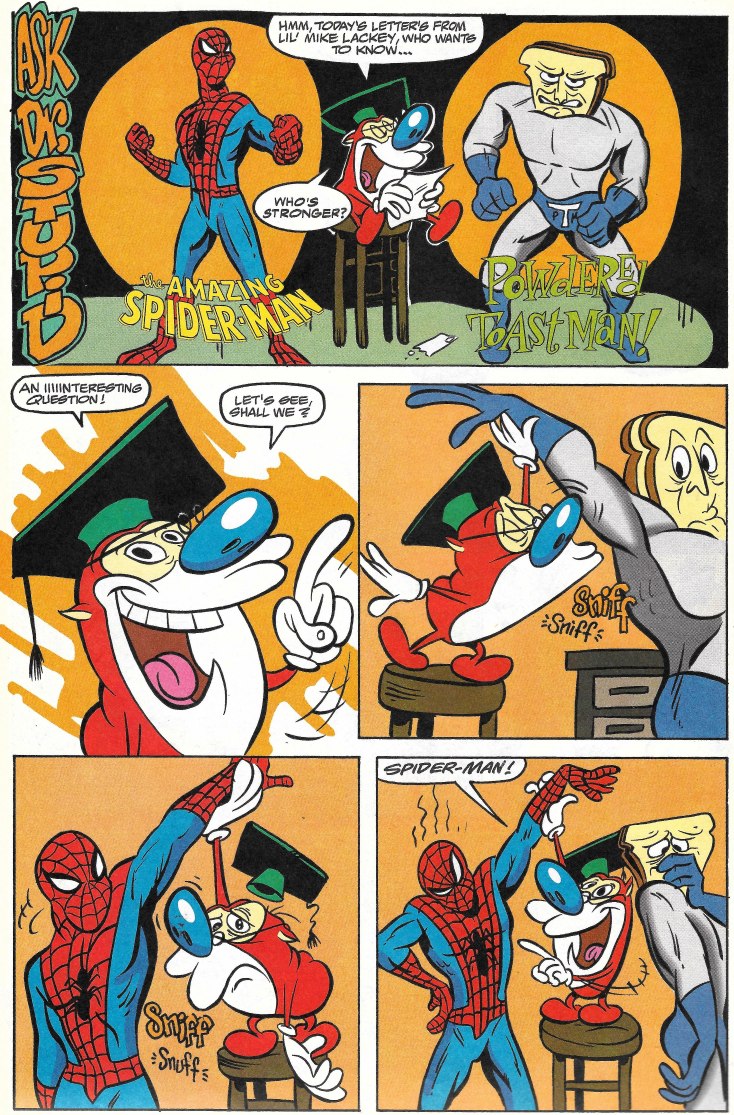 So the issue fairs pretty well for having to give due to both of these characters. It is definitely more of a Spider-Man visits Ren & Stimpy Show rather than the other way around. But it is handled as competently as the What The… magazine stuff from the late 80's, so I rated it worth a pick up.
Posted by SonOfCthulhu at 2:42 AM