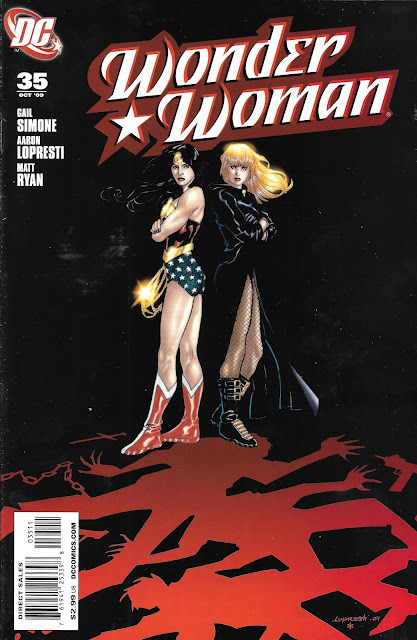 With a hefty dose of Girl Power!

There are many bright and shining spots in the Crapbox. Overstocks. Issues that were overlooked. Discounted books that weren't supposed to be.

Every time I find a Gail Simone book in there, I smile. Simone is one of those authors that if I had enough money (I don't! Stop asking me! I have to eat! And my house needs a new foundation! And I have flying ants in the bathroom! I have no room for them! Stop! Stop!)…I'd buy every book she put out, new and old.

I came across Simone in the Half-Price tpb section. The store I was at had two Birds of Prey trades (Of Like Minds and Sensei & Student) at SUCH a deal that I couldn't pass them up. Instant love. Yeah, pretty much.

I've unearthed from the pool of single issues making up the Crapbox much of her body of work since including: Villains United, Secret Six, Killer Princesses (always issue number 3, for some reason), a smattering of Birds of Prey, this single issue of Wonder Woman and a large run of the post-Cassandra Cain Batgirls. I'm saving those Batgirls for a day I am laid-up and sick in bed to act as comfort reads.

Why is Simone so enjoyable? I think she understands the hero (and especially the feminine hero) archetype better than most. Her stories always make me feel satisfied that good triumphed over evil, and that teamwork will save the day. It's similar to how a good Indy movie will make you feel as you walk out of the theater.

And nothing quite uplifts like her writing Dinah. Or Barbara. Or Diana. (And with Dinah to boot!)

Come along with me and I'll show you what I mean.

We start with Wonder Woman posed over a defeated giant robot holding aloft a tremendous sword. If this feels to you NOT like what a Gail Simone written Wonder Woman book would be like, you're not alone. 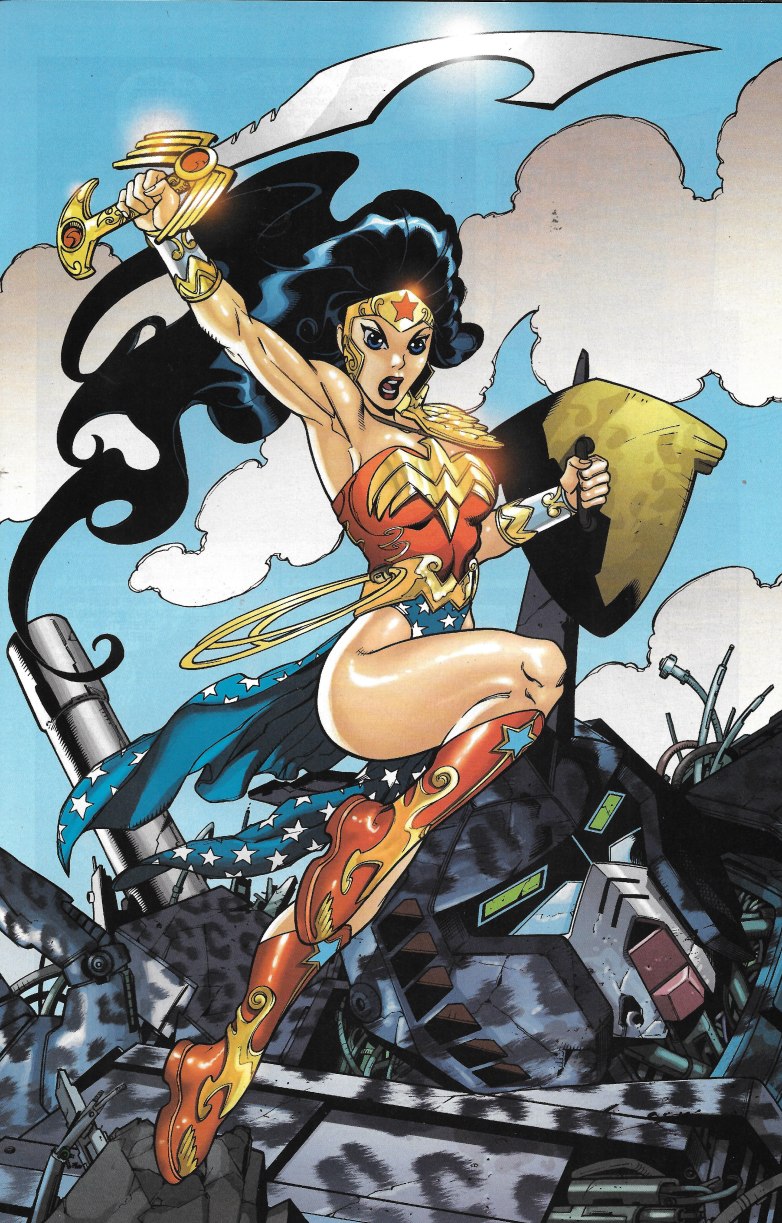 But don't fret! This image is one of those high-dollar statues that litter the counters of your favorite comic shop. This is the "Wonder Woman Happy Magic Fun Swordgirl! Sexy! Sexy! Fight! Fight!" statuette and she's fairly expensive according to Dinah Lance A/K/A Black Canary. Diana and Dinah are in a shop that sells superhero merch in a world full of superheroes. 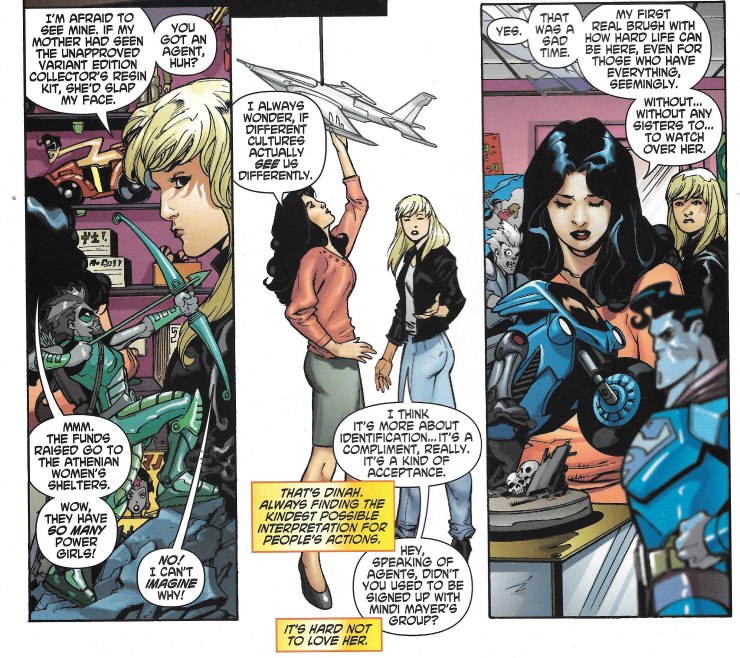 And Gail is nibbling at the hands that feed her in a way that doesn't feel childish and is totally just for fun. Yet, still makes a point. So mark down "witty" and "brave" in that list of reasons why Simone is so enjoyable. (also kudos to the entire art team on this one).

Not only that, but as the panels above show (with their "so many Power Girls" joke) is that she can also develop two women characters without making use of who they are dating. Simone passes the Bechdel test. Time after time she gives us real, incredible, and interesting people who just so happen to be female superheroes. Which is how it should be.

In this conversation we are setting up the big whammy for this issue. There is still a part of Wonder Woman that feels she is missing a "sister" in Patriarch's World who has her back. Within a few pages, we are going to see that Dinah does, in every way that could be. 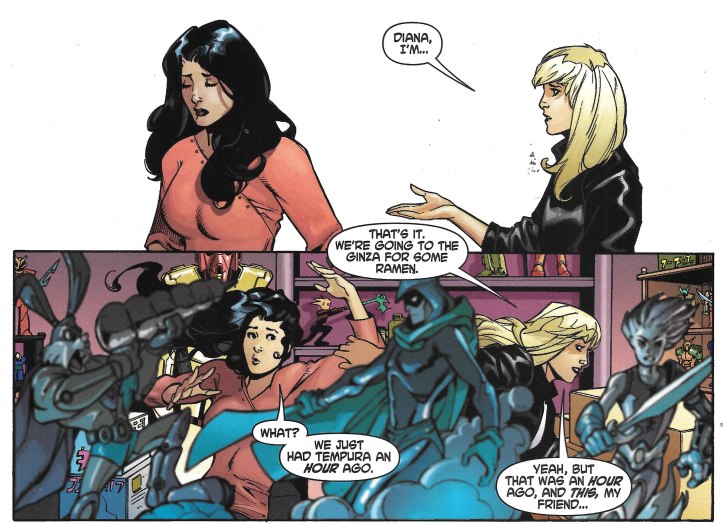 They are in Toyko and I don't have the issue before, so like all Crapbox finds we just jump in and swim. What I quickly glean is that they are undercover, investigating a superhero fight ring that might have something to do with Roulette and might have something to do with Dr. Psycho and might be about rescuing Sarge Steel. The pair are of course disguised as metahuman fighters for the sake of the contests, looking to get dirt on what is really going down.

I worry a tad as, on the way to the noodle house, Dinah starts talking about a "hot salaryman" she spots but quickly it evolves into this… 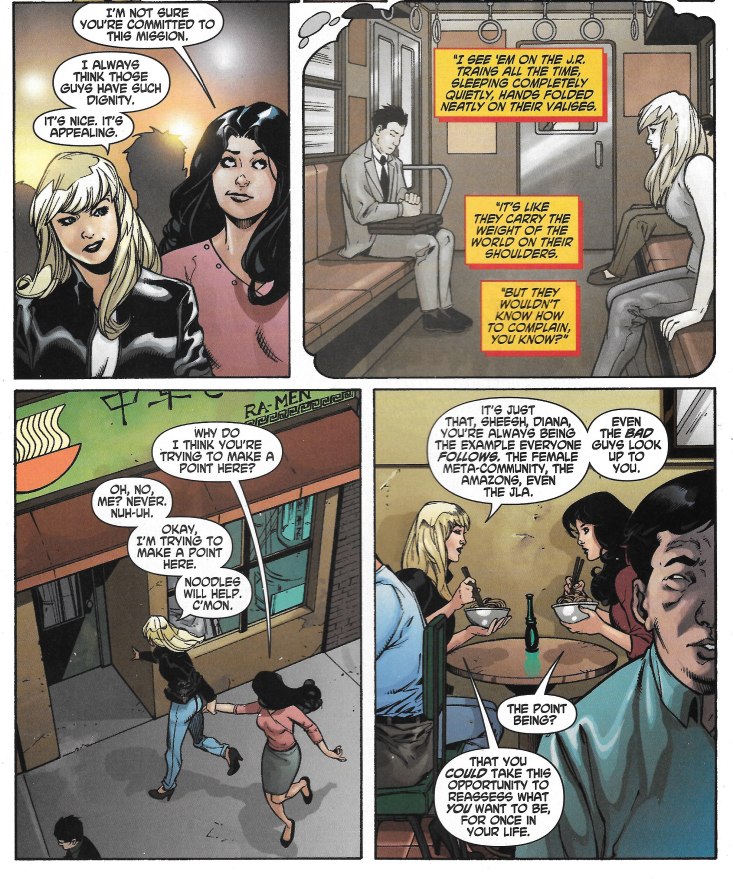 …which is clearly NOT about the type of man she prefers (sheesh, have you seen Ollie?). It's a commentary on Wonder Woman, veiled in terms the princess doesn't miss.

Which begins a conversation about how Diana is perceived and how the Amazon has the ability to make that whatever she wants. 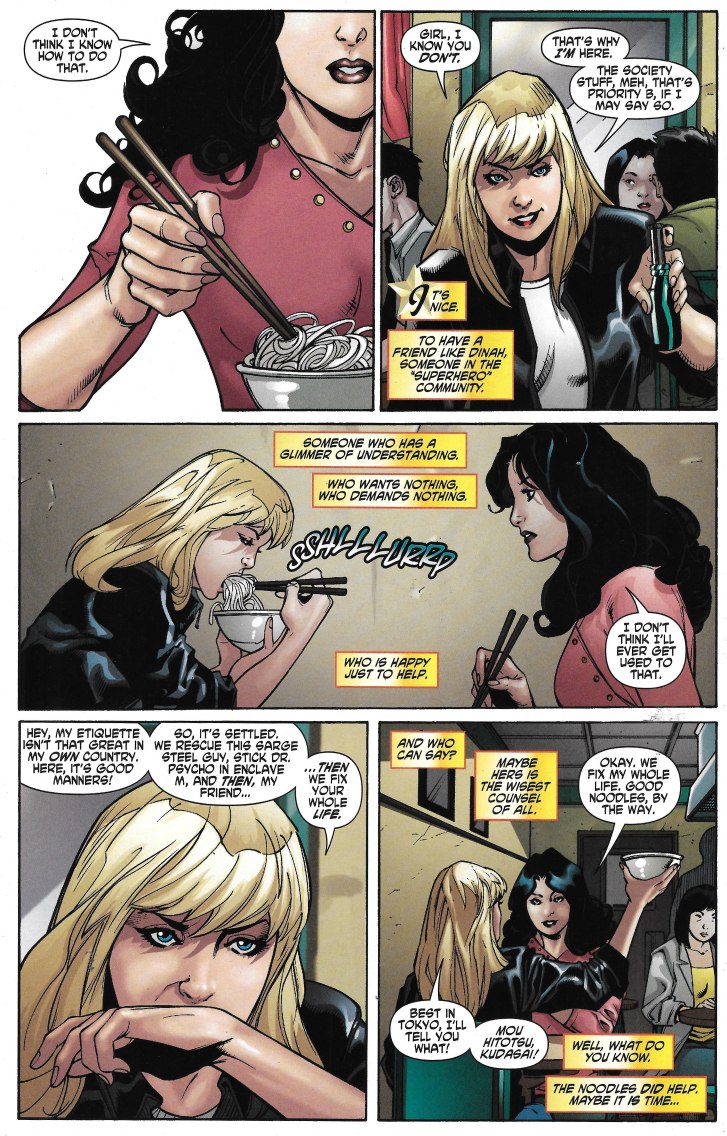 …even if she doesn’t know what that is. Nice character driven moment…that also, for those of us who watch narrative flow in episodic dramatic mediums note, summarizes the plot for the audience without breaking the forth wall and outright TELLING (that horrible bane of every writer ever to stroke pen to paper) the audience what has gone before and how that impacts the action going forward.

That is such a subtle thing on this page. There are times when I smile at the structure of a story because the word elegant comes to mind. I smile a bunch at Simone's work. 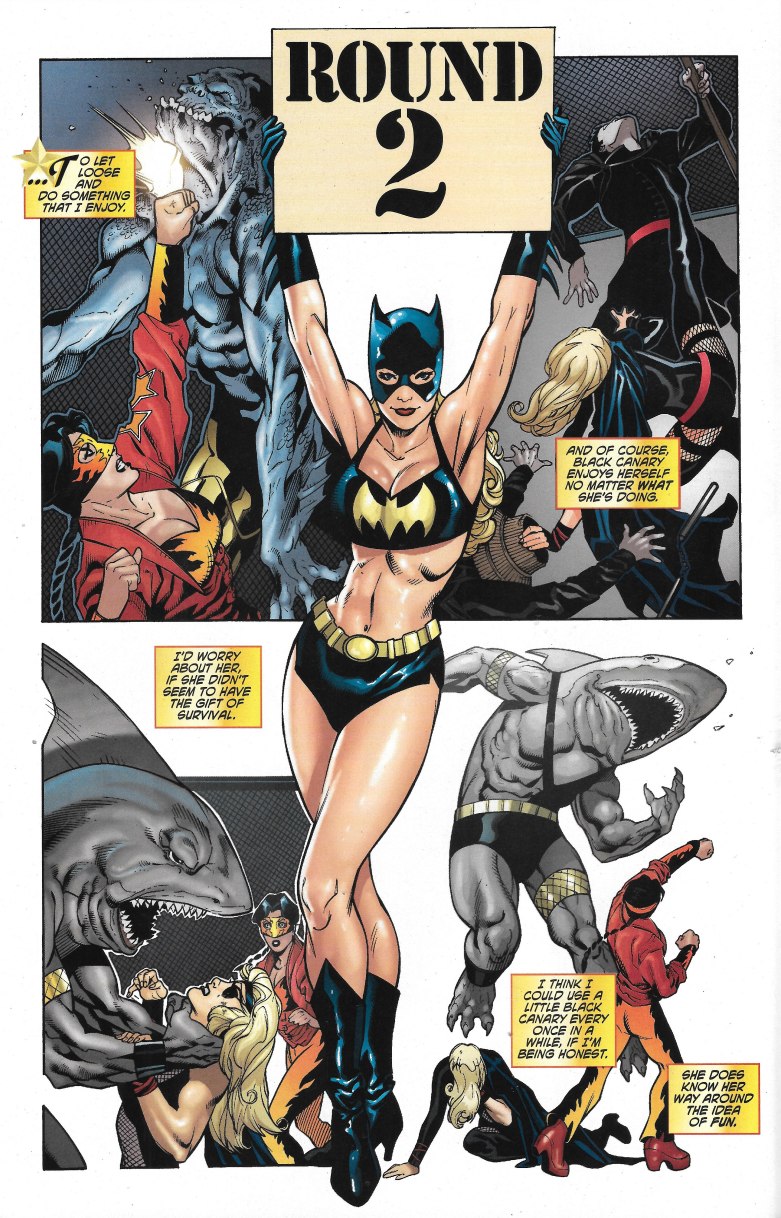 Dinah has been a pet project of Simone's for some time, so seeing her at ease with the character is no surprise. However she gets Wonder Woman too. As the pair battle some decidedly tough matches in disguise, Diana's internal monologue shows that sisterly affection that the other books allude to. 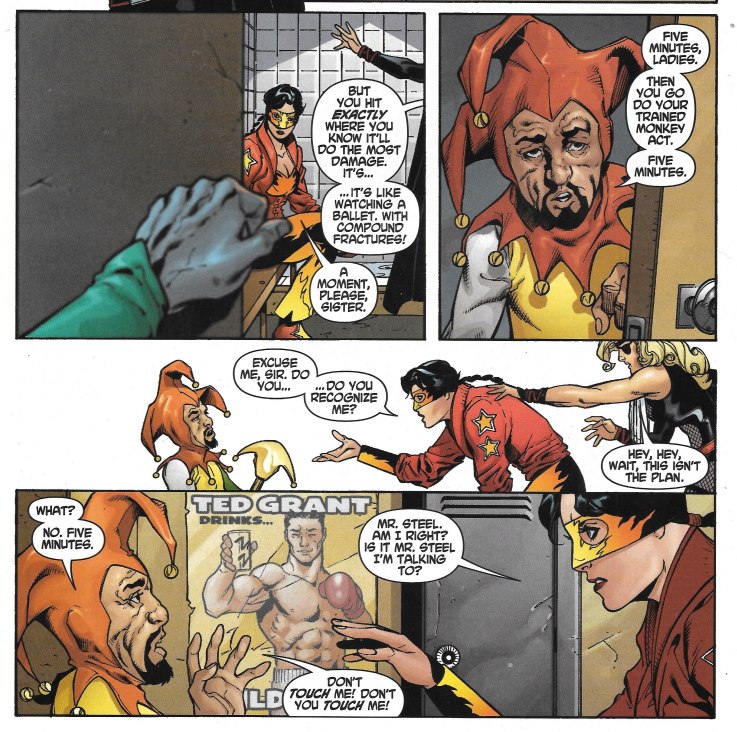 And part of that sisterly affection is to, after winning a fight, to allow her to prattle on about how much fun it is to watch you level someone. However that's when the plan goes off the rails as Dr. Psycho comes in. He's acting like a between round announcer/laughingstock for the fights, but Wonder Woman knows something is amiss with her old archenemy. 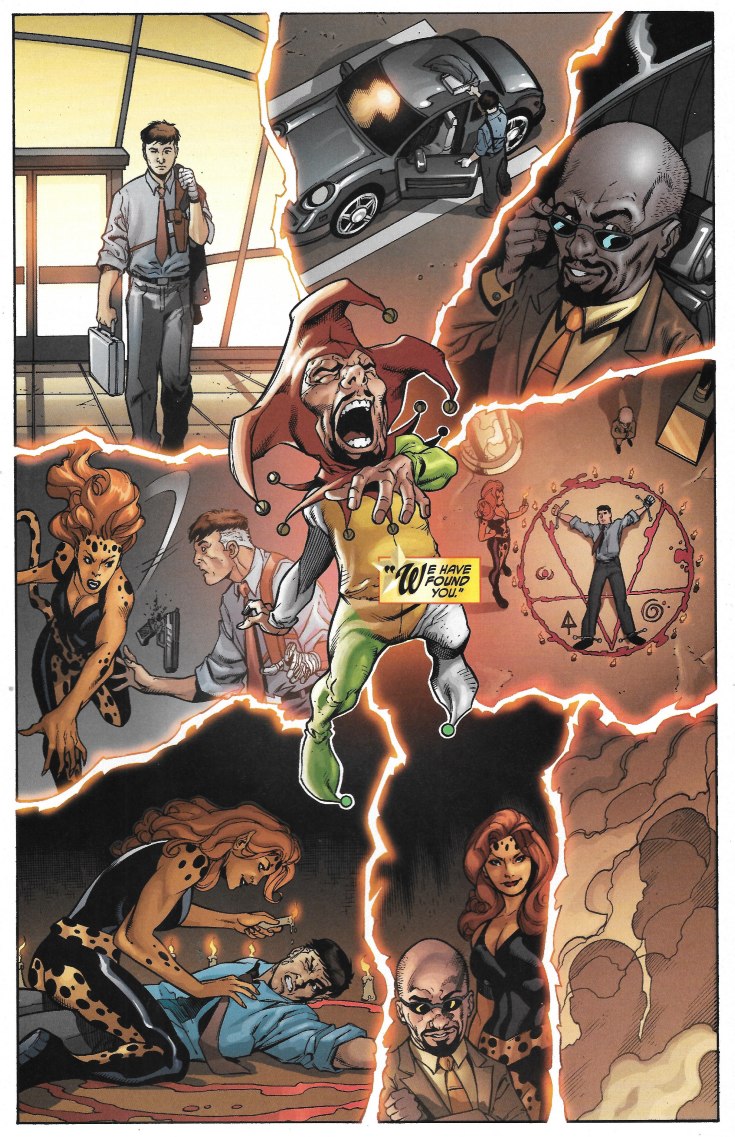 And just like that it comes out. Cheetah and Dr. Psycho did the old "Freaky Friday" mambo with Sarge Steel and the midget's mind. Now Steel is trapped in the body of a criminal and the bad doctor has Steel's much taller physique. 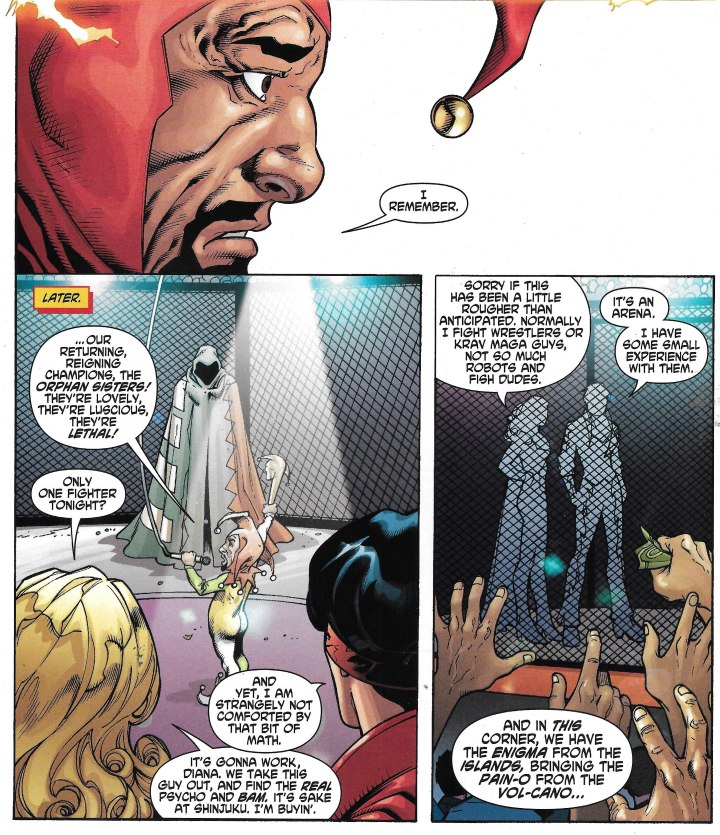 This discovery means they can breathe a bit easier, leading into their final fight against a lone adversary. After this bout they can take Dr. Psycho in Steel's body and force him to swap back. But they have to win the match first. 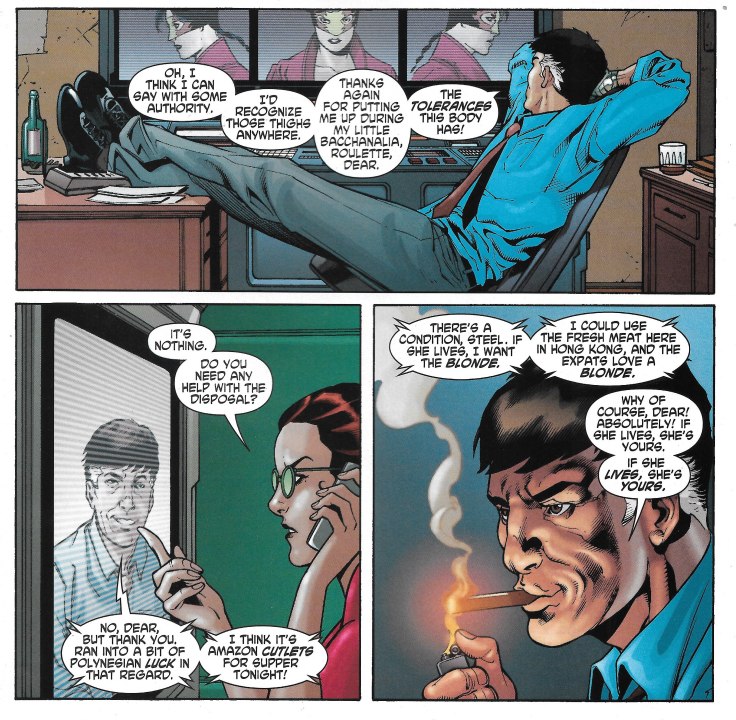 Unfortunately Psycho has their number and has arranged for a little surprise for them. One that will spell the end of Wonder Woman and a not too bright future for Canary. 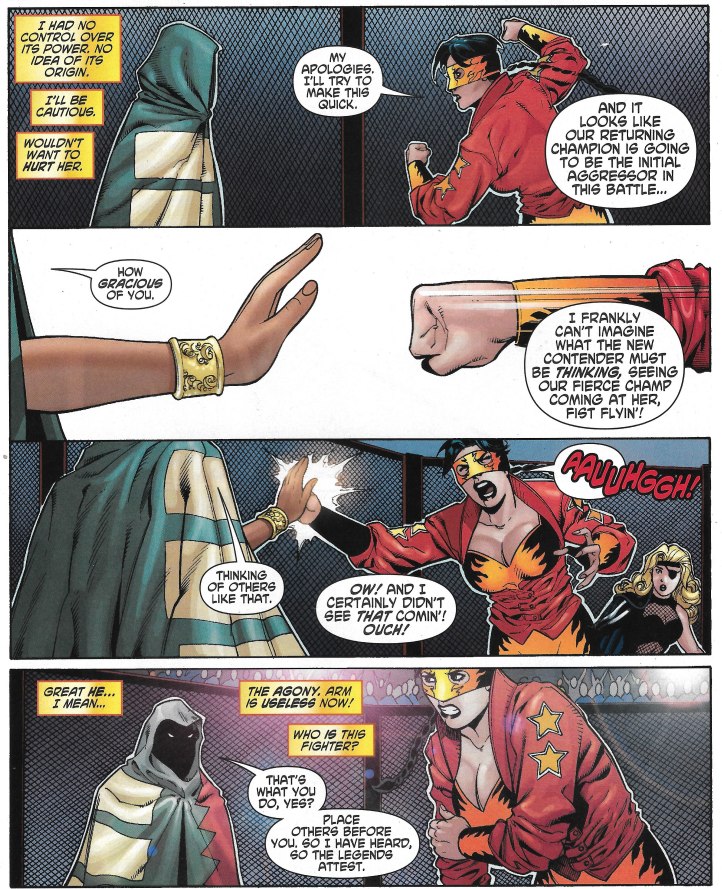 The fight gets under way and from the first blow, things go sideways in a major way. Appears Diana's strength is no match for the newcomer's.
As well they shouldn't be. The person under those robes turns out to be immensely powerful, able to burn away the pair's disguises with a wave of her hand. While Psycho cackles with glee, Dinah faces an offer of mercy… …the she turns down to have Wonder Woman's back, even at the Amazon's own urging to bow out. 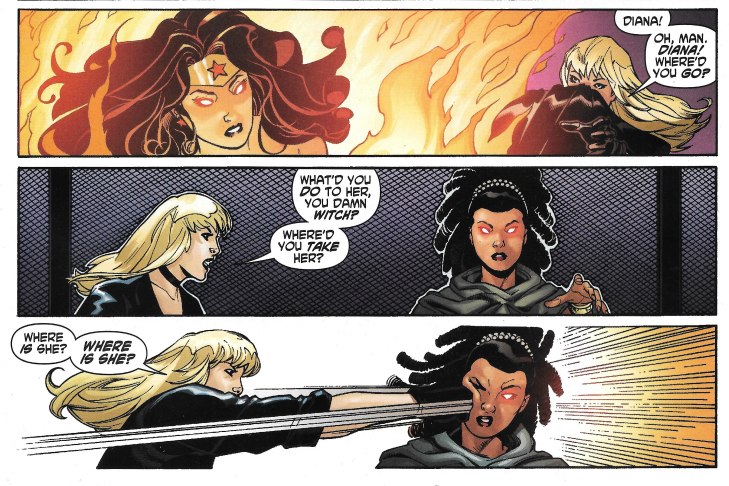 Not that that does much good, as the mystery woman puts Diana into a REAL fiery trance that Canary can't do anything to shake. 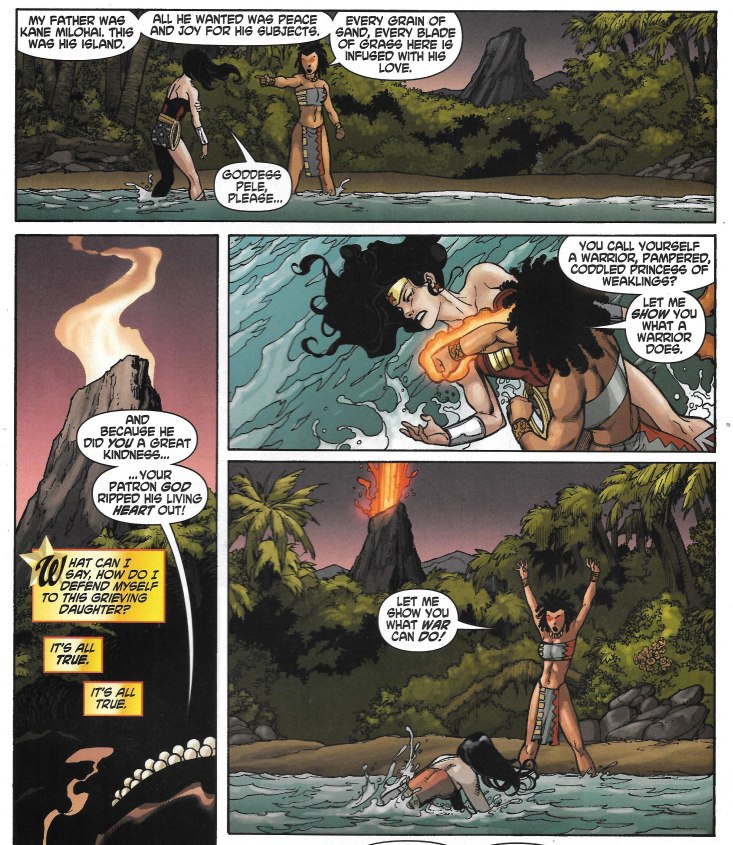 Wonder Woman finds her spirit transported to an island where her opponent reveals herself to be the Polynesian Goddess Pele and daughter of Kane Milohai. Zeus obviously took offense to Kane helping Diana out in the past when they were at odds and murdered Pele's father. And like any good daughter, she is greatly upset with this. 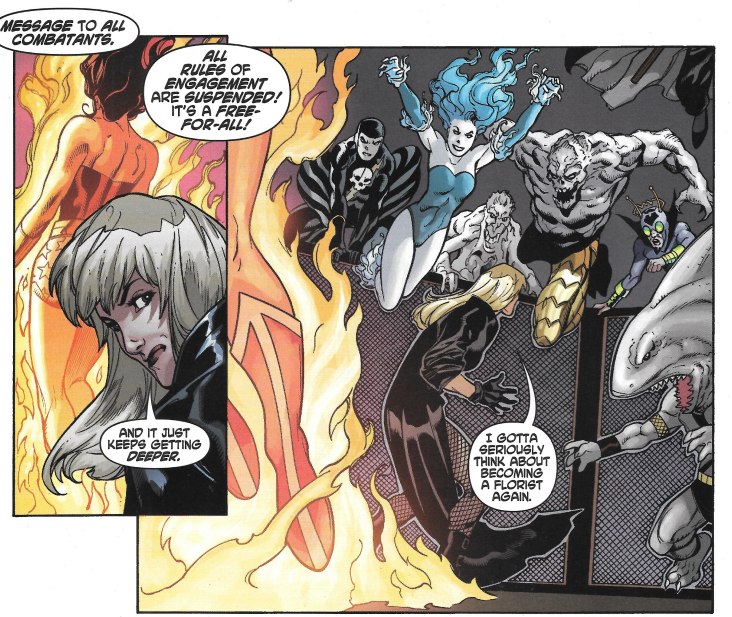 Meanwhile, Dinah has to stave off the attacks of any wrestler left standing while guarding Wonder Woman's back.

And back on whatever spirit realm the goddess has pulled her to, Wonder Woman has been taking it on the chin quite a bit. She's not comfortable going all out against her, given Diana feels guilty over Pele's father's death. 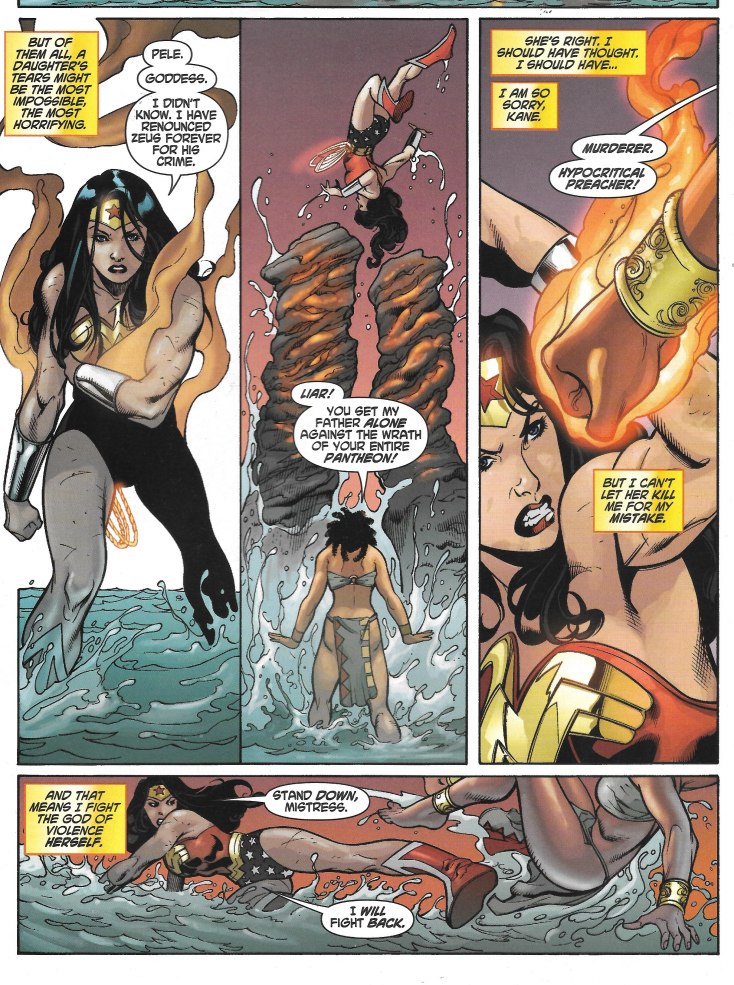 But she isn't bowed yet, even if she is lacking in the raw power of a goddess. 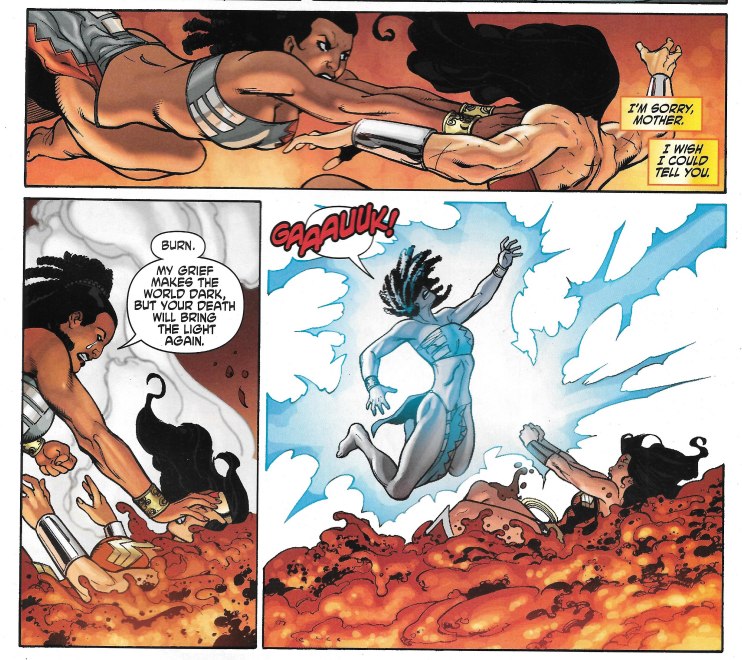 Simone knows that there is more than one way to win a battle, though. Unlike countless other books, most with male characters front and center, Wonder Woman is one of the few heroes that can lose the battle and still win it all. 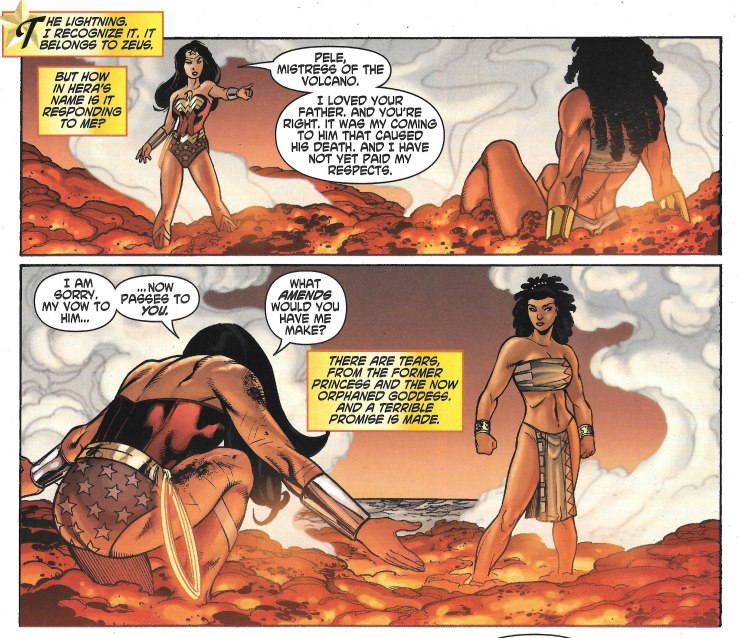 It's all in getting what makes Wonder Woman unique among her peers. She is exceptional and strong, but most of all compassionate.

And Simone is all those things, too.

Just to make certain we leave no unturned stones, Sarge Steel looks to be getting his body back as well. 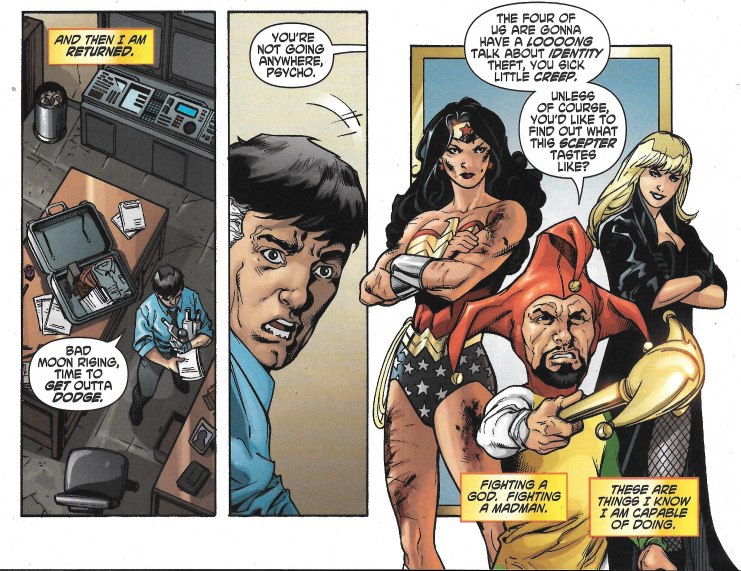 It would almost be a perfect man-free issue if the back two pages weren't devoted to Diana's newest beau Tom. 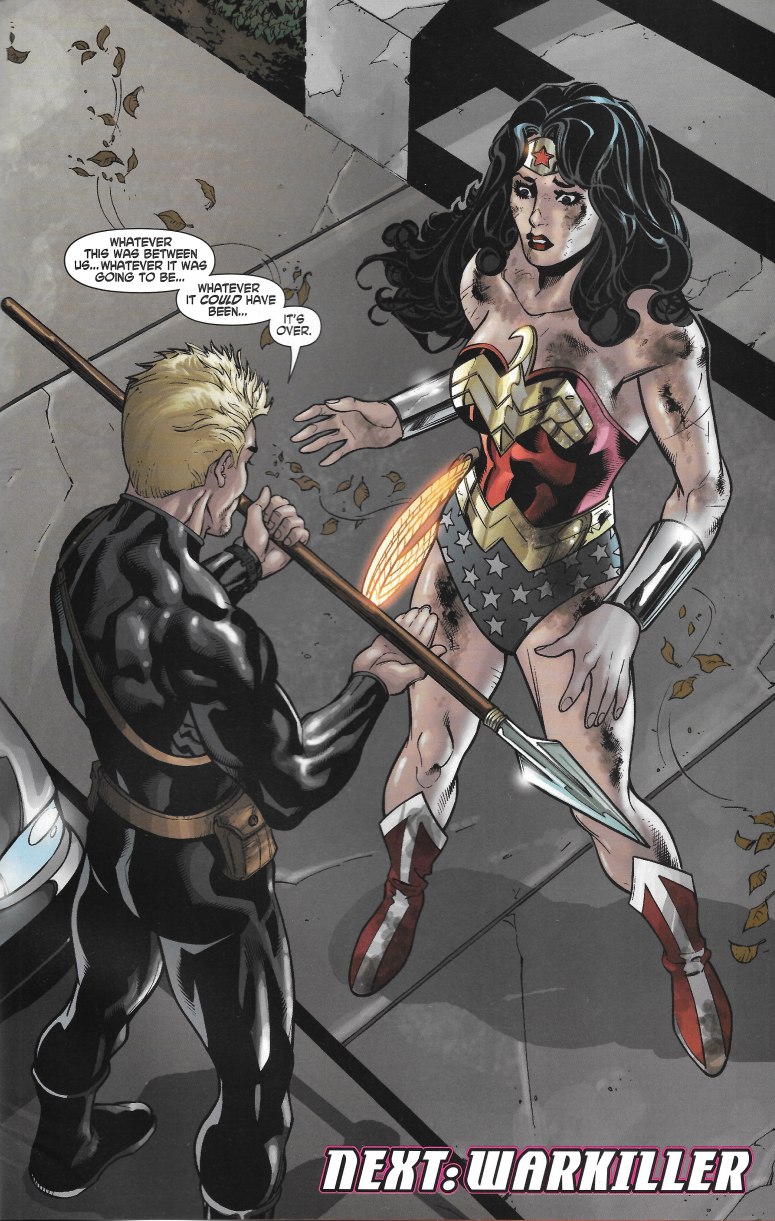 Or maybe that's "recently past beau Tom." Sounds like a good reason to get Dinah & Diana together with four or five pints of Ben and Jerry's.

Loved this issue. I'm glad there are lots of voices out there making comics. That everything isn't just over-the-top fighting and slick set-pieces but that occasionally there is someone who knows how to write compelling characters with realistic motives and actions.

But most of all I'm glad that the better ones, the BEST ones, occasionally find their way into the Crapbox.

Soon, Batgirls. Soon.
Posted by SonOfCthulhu at 2:35 AM